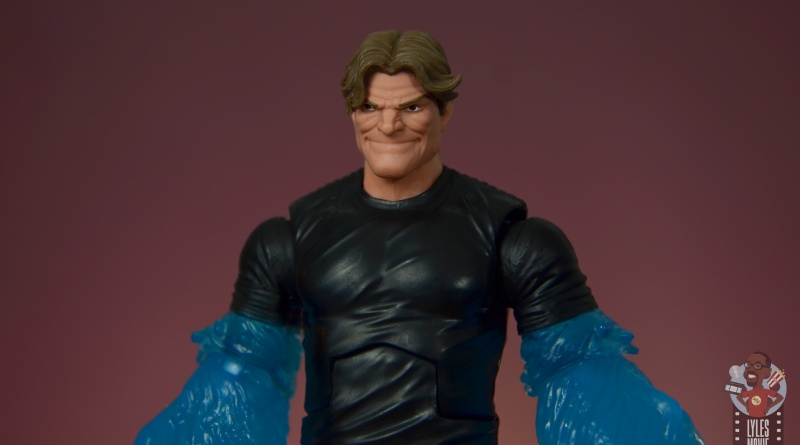 Every good hero has great villains. The best ones have arch-enemies that can plague their respective universes (think Doctor Doom, Lex Luthor, Darkseid, The Green Goblin). Then there’s the bad guys who provide more of a nuisance to our heroes. That’s firmly the category I’d place Hydro-Man in, but he’s one of those villains gives a line its real personality. Hydro-Man has been overdue for a Marvel Legends figure — seriously how did Red Goblin skip the line on him? — so let’s see if I’m awash with excitement with his release.

Packaging:  It feels like it’s been awhile since I last reviewed some Spider-Man figures so I appreciate the red accents on the black a bit more this time. The figure is neatly arranged and is set up in a way to look very impressive in the packaging.

I like the side portrait showing his powers in action and this is a bio that actually reflects a little effort put into it. 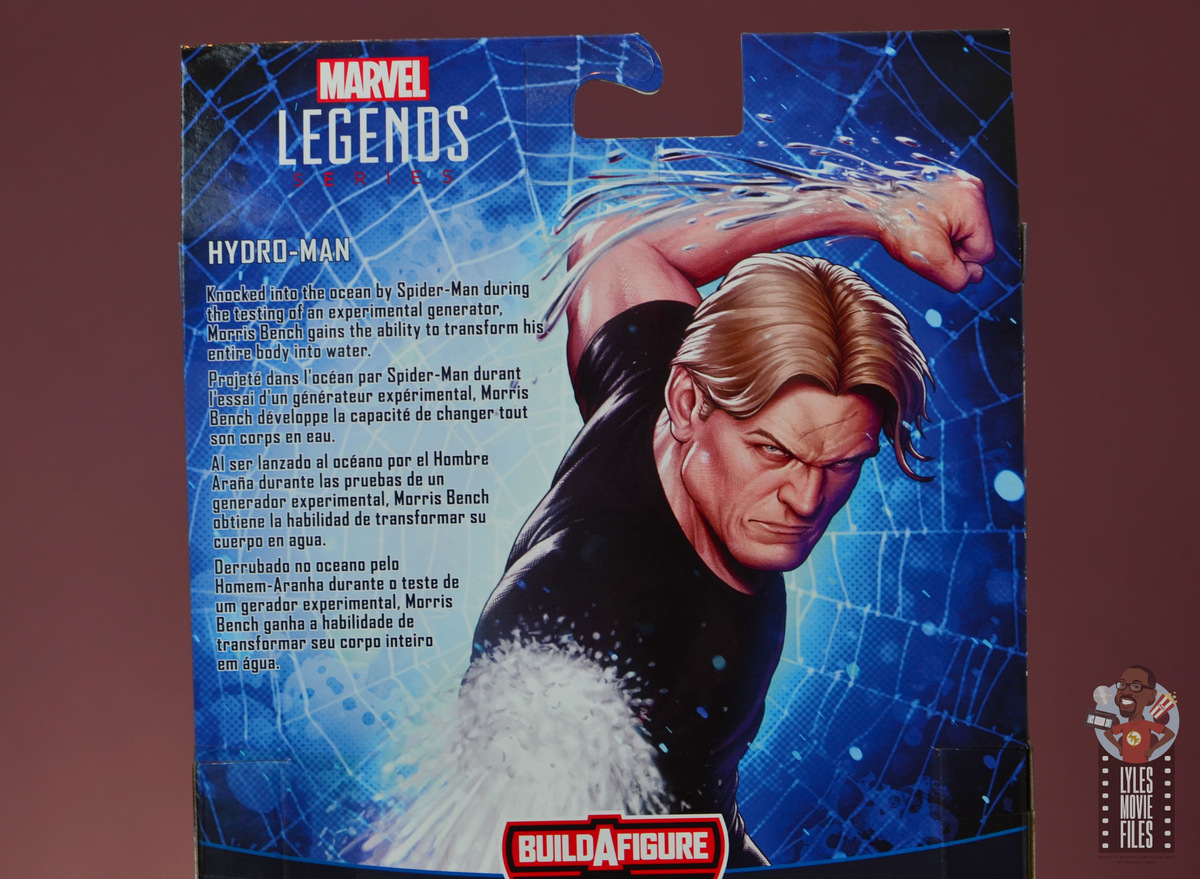 Likeness:  Hydro-Man is a basic goon wearing a plain black T-shirt and jeans. He didn’t bother coming up with some clever aquatic theme costume. Basic is better for him and far more inconspicuous. 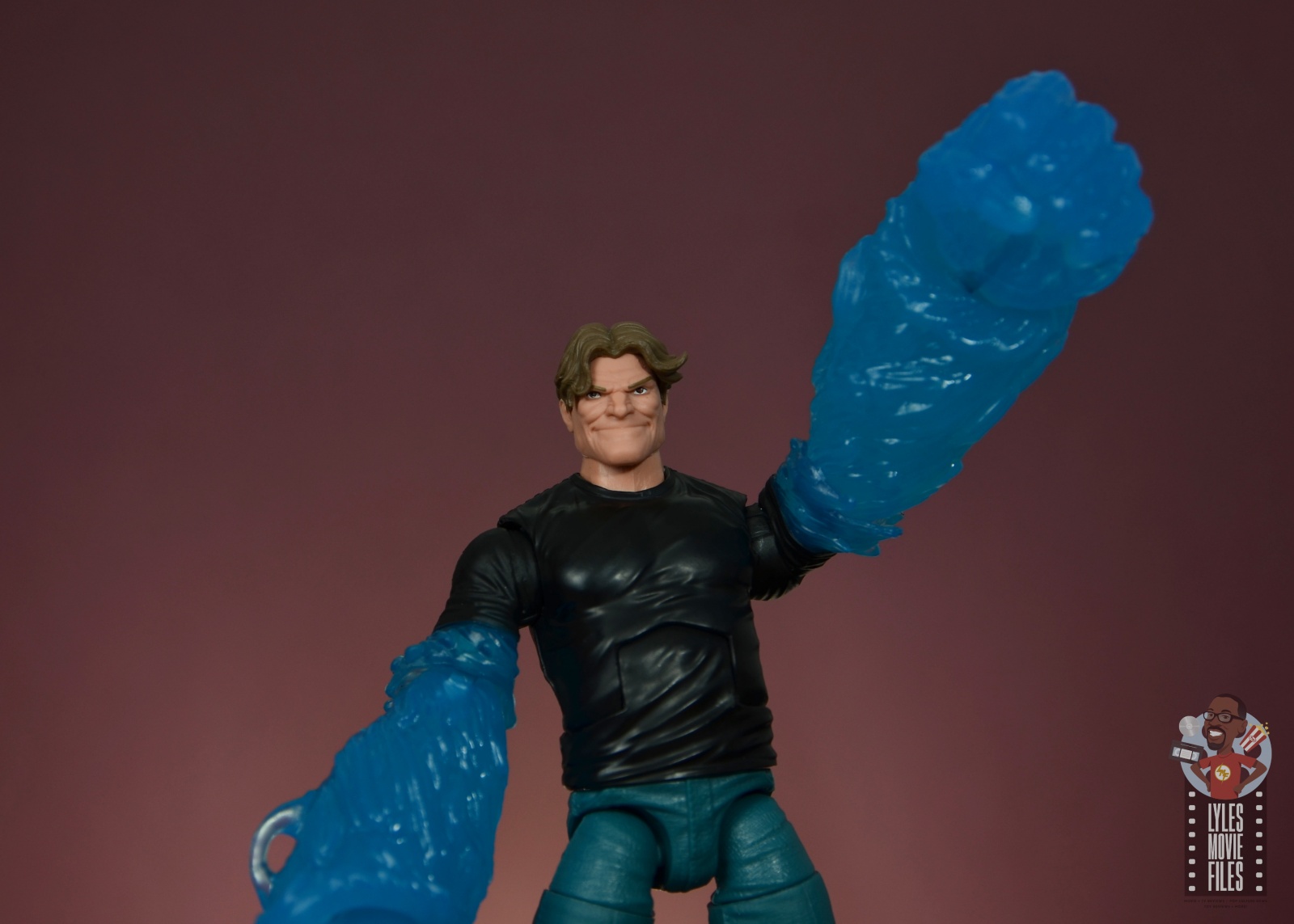 Most of the figure is from the Netflix Luke Cage sculpt, which was a smart reuse. The differences really help him to stand out. 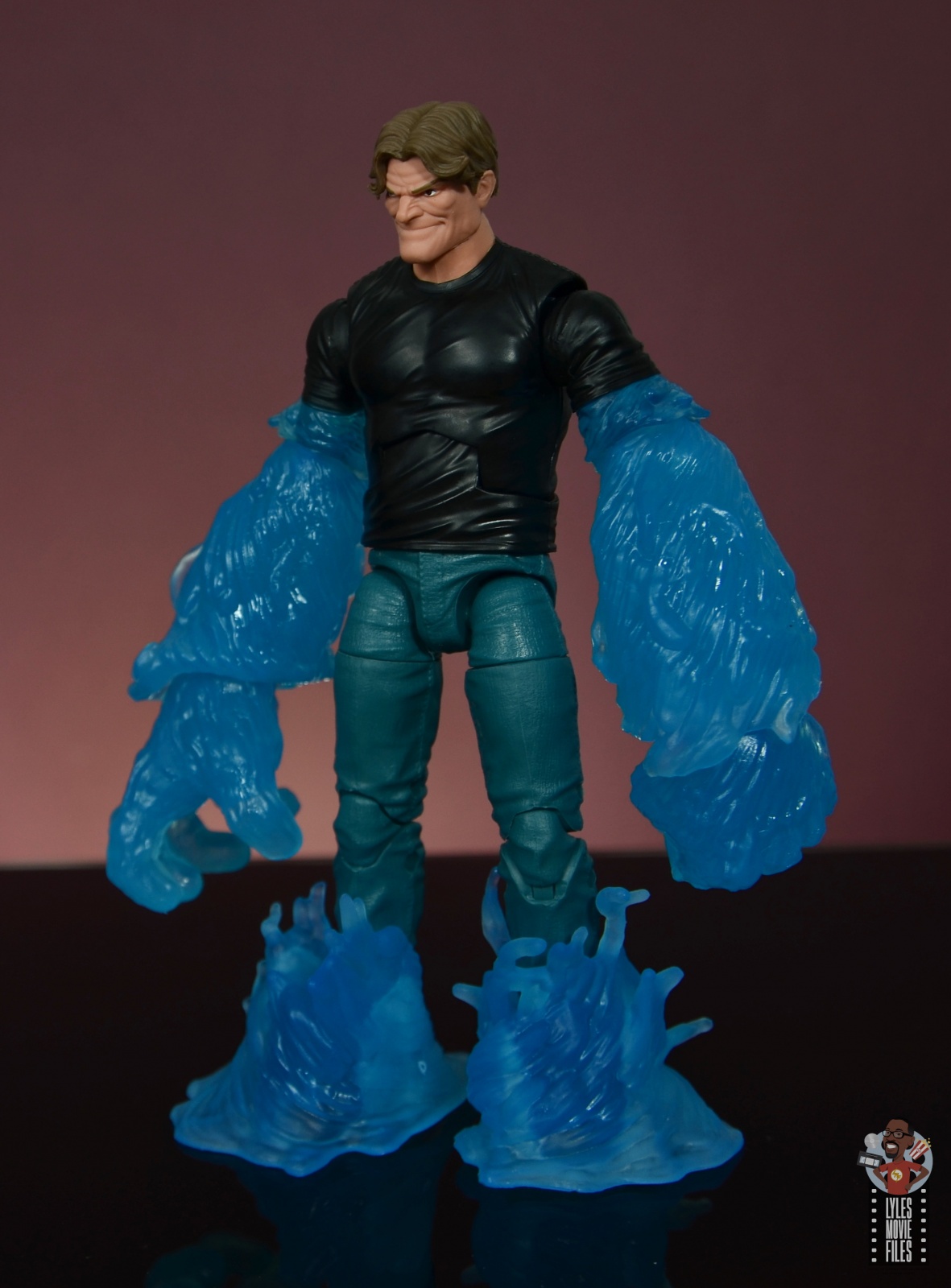 He might have one of the best, most character appropriate head sculpts in the history of the line. Hydro-Man looks like a pure thug with a bullying smile like he’s about to show Spider-Man. I like the hair sculpt as it gives a wave-like visual. 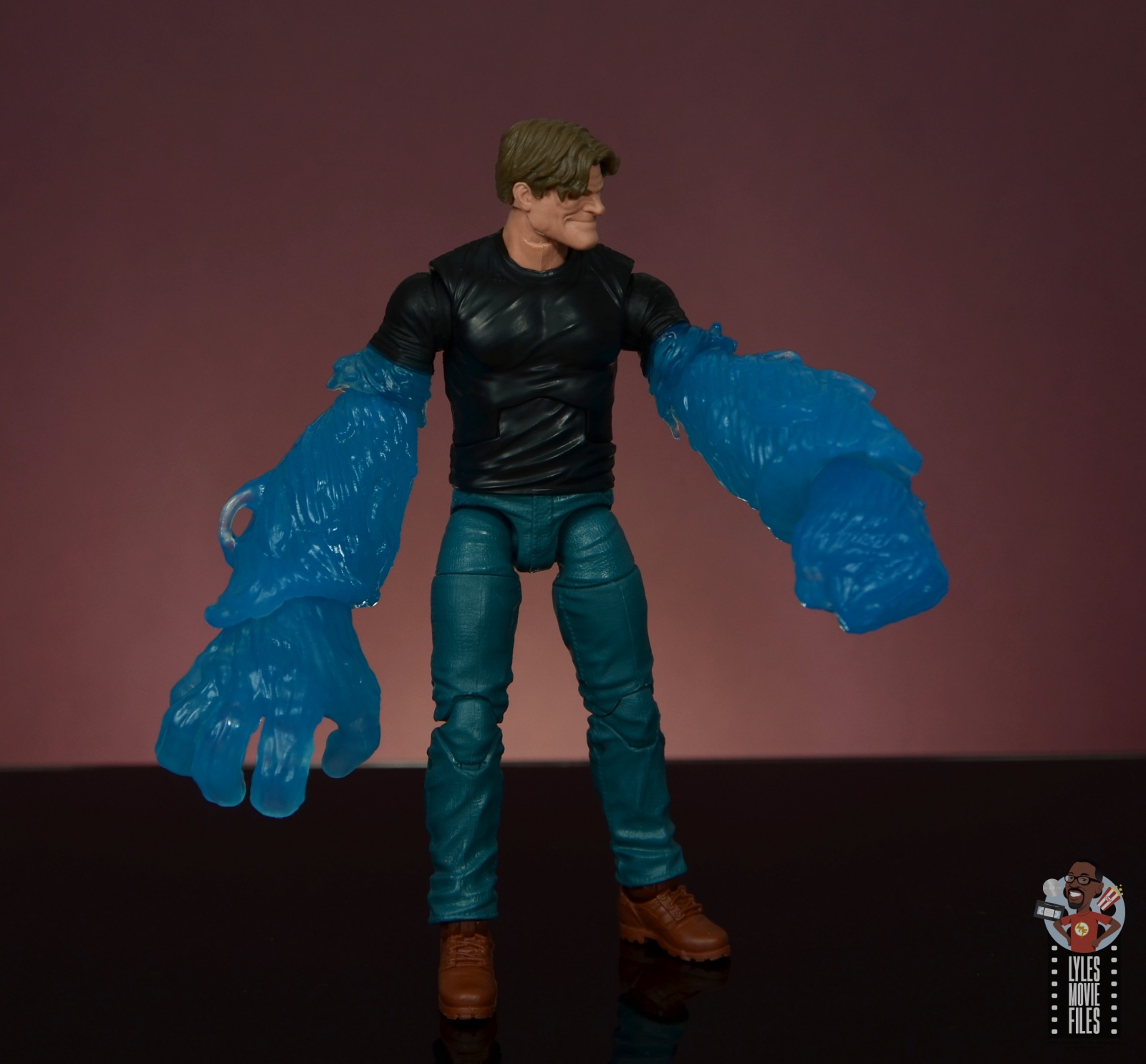 Hydro-Man has watery arms showcasing his powers. I like the water sculpt in the arms, which isn’t easy to pull off. It’s an achievement of both the sculpt and the paint job.

They’re made out of a blue translucent material that catches light in really interesting ways. There appears to be some gradient in the blues as well that simulates water as well as can be expected. 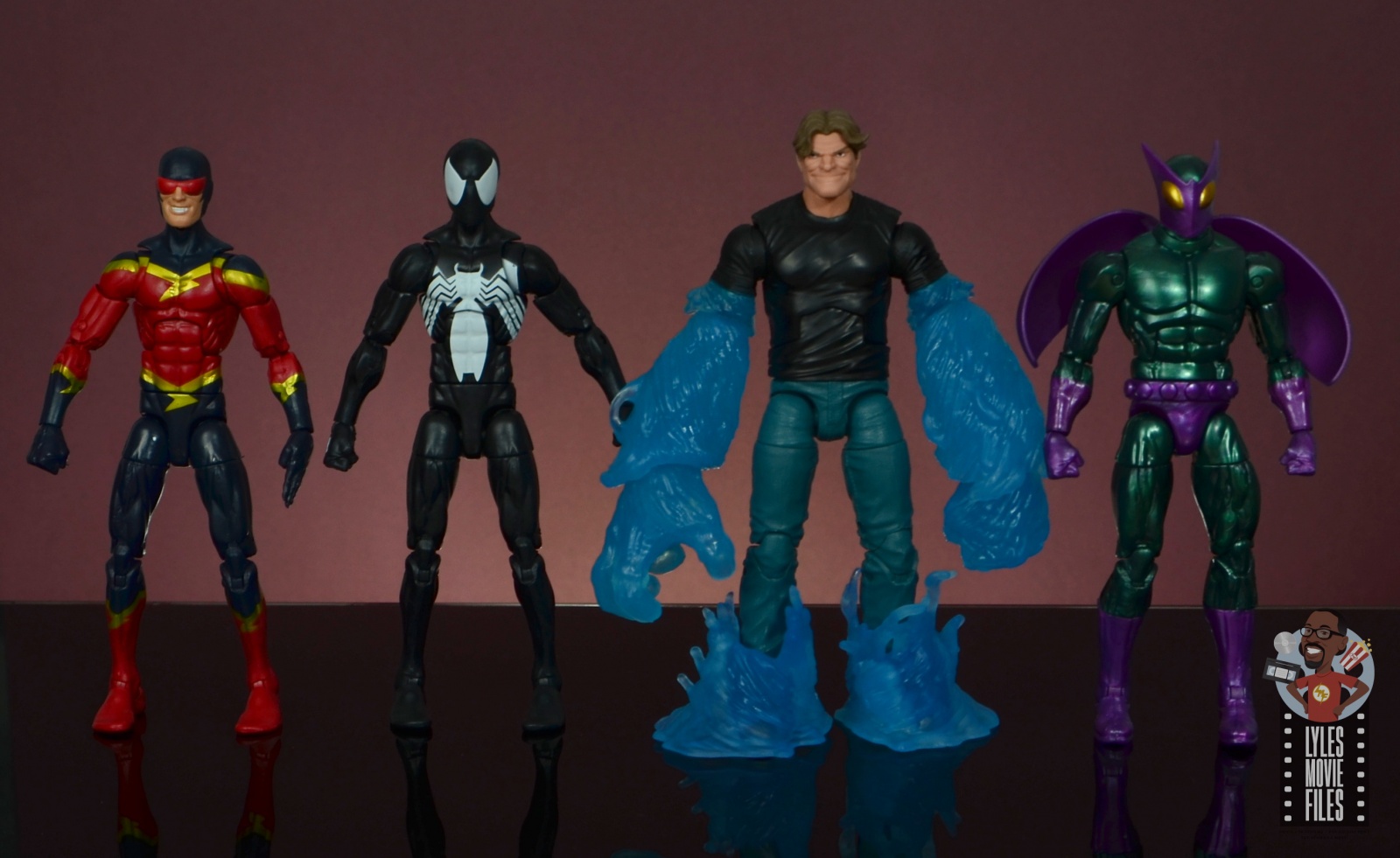 Scale:  Hydro-Man is regular height so he’ll look fine next to your Spider-Man and standard Rogue figures. If you’re like me, you’d want to do a stand-off with him and Sandman, which won’t look great thanks to the supersized BAF mold Hasbro used for him. I wouldn’t mind Hasbro taking another crack at him… 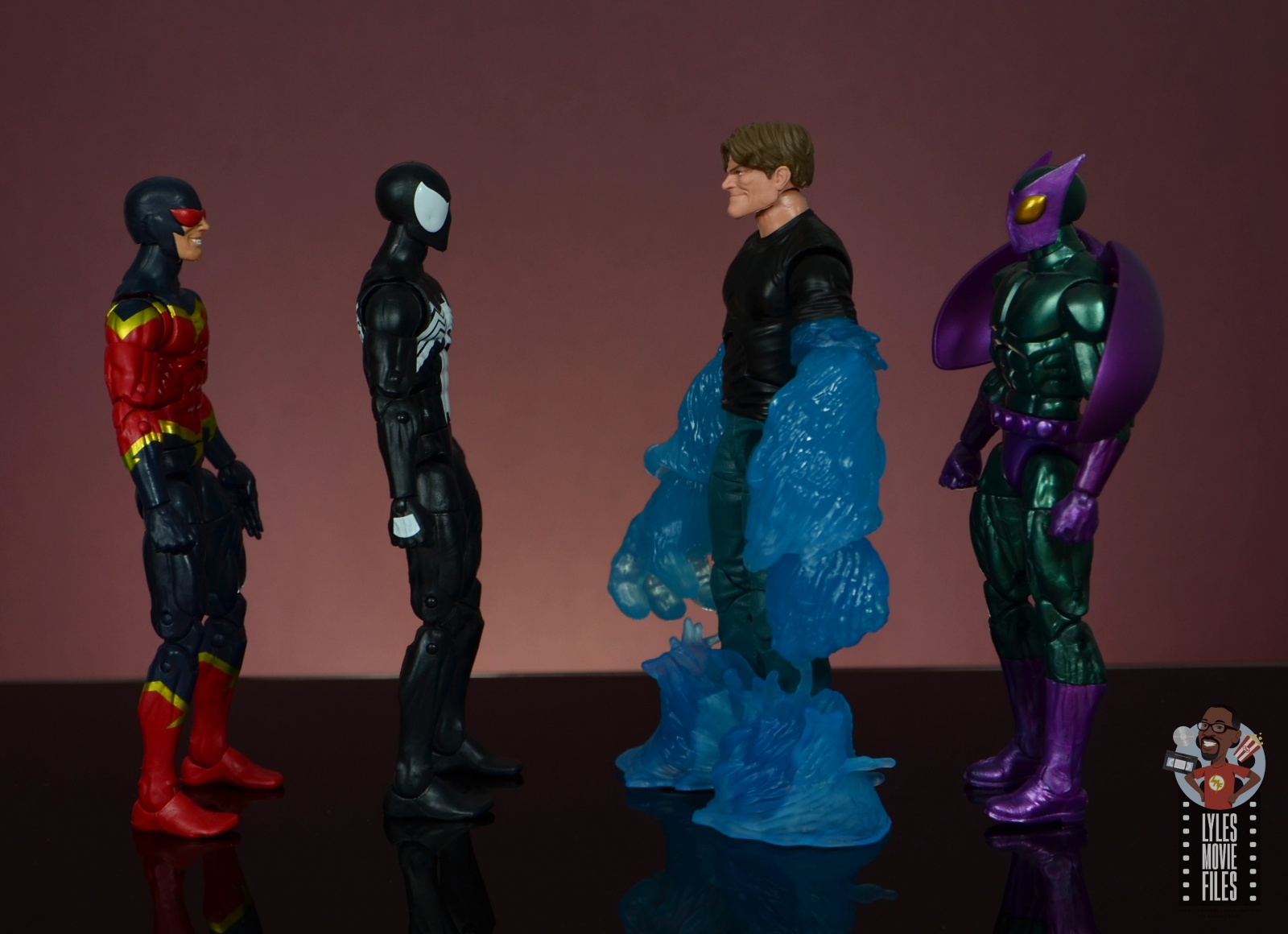 Articulation:  The arms limit poseability as there’s little range in the elbows and the shoulders don’t spread out very far, but he you’ll be able to get a decent amount of waterlogged action scenes with him depending on how you set up Spider-Man. 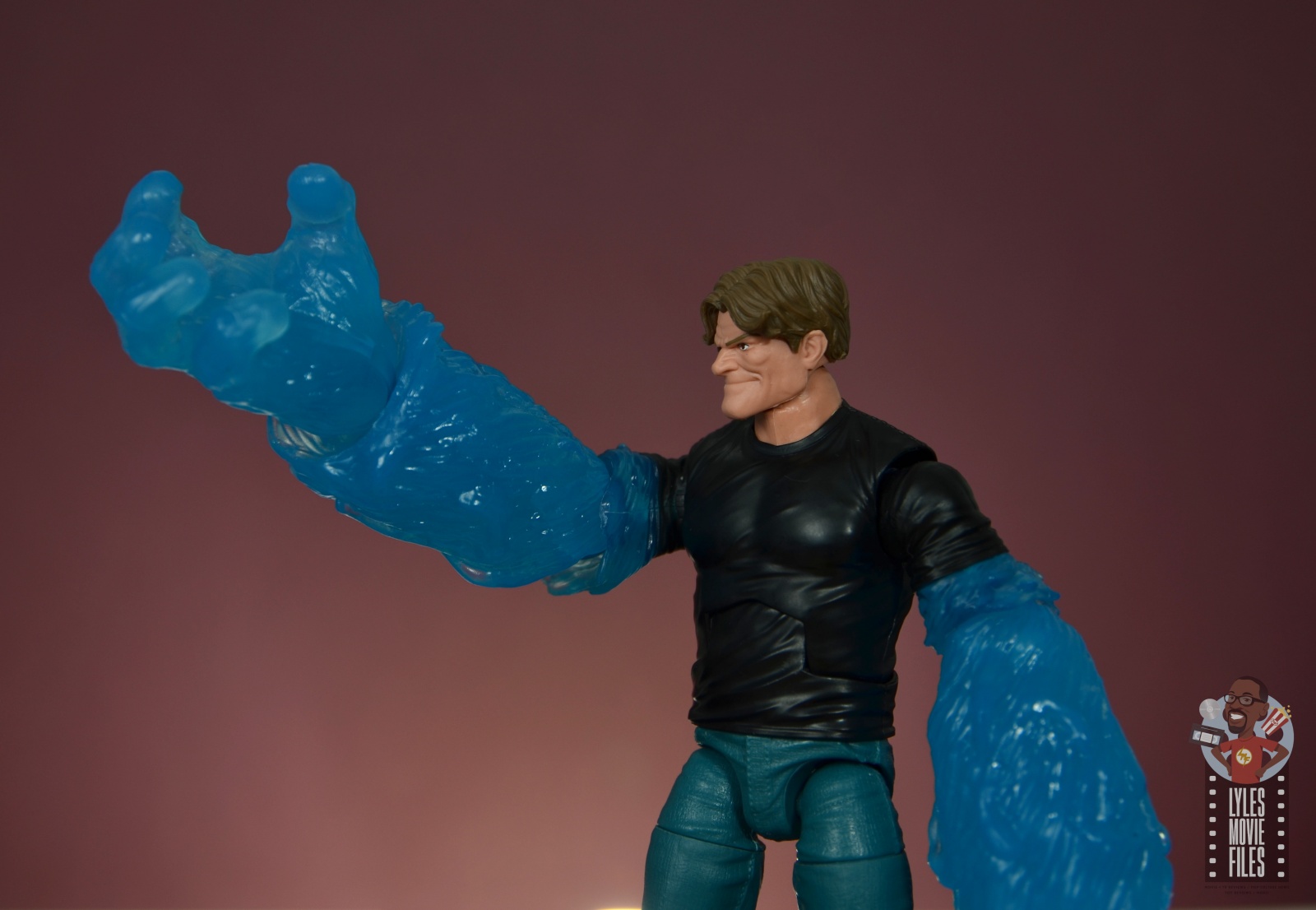 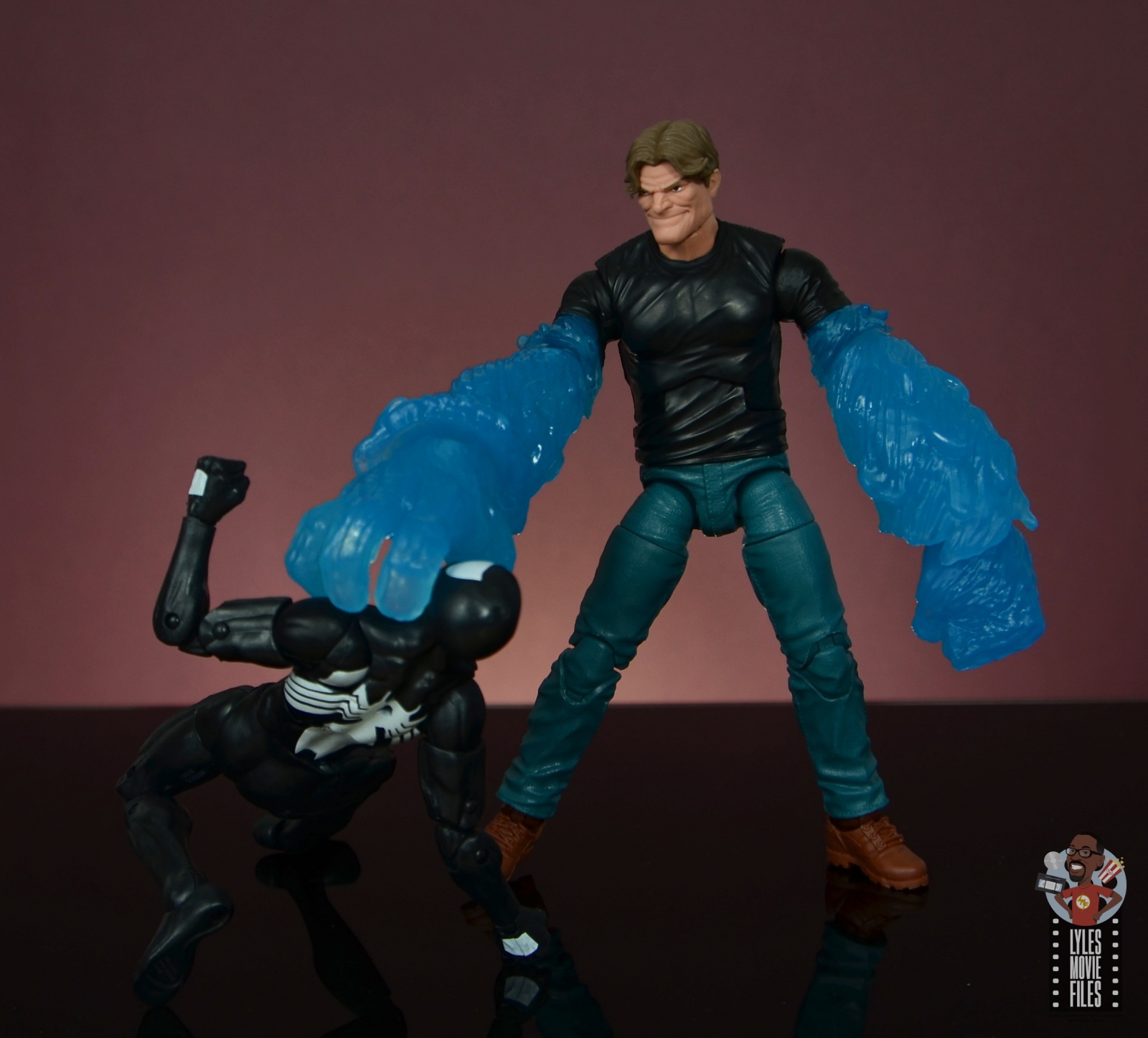 Accessories:  Hydro-Man comes with a water base for his feet similar to the Mysterio figure. Trying to do lower leg water pieces could have been an issue and this was a smart workaround while showing he’s got water transformation abilities in more than just his arms. 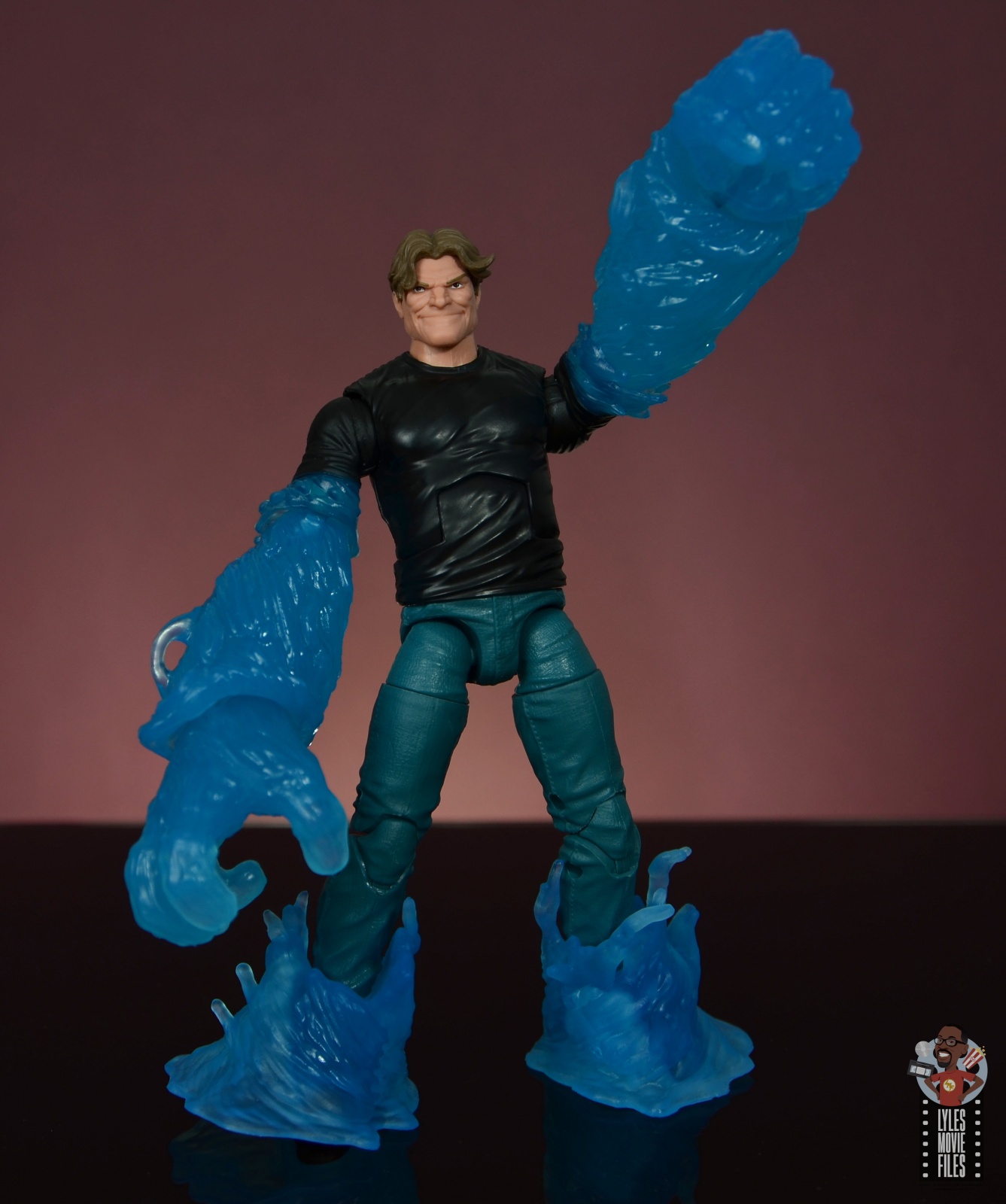 We’ve gotten swappable arms before so it would have been cool to get non-powered arms as well, but if we had to choose between the two the powered-up ones were the way to go. 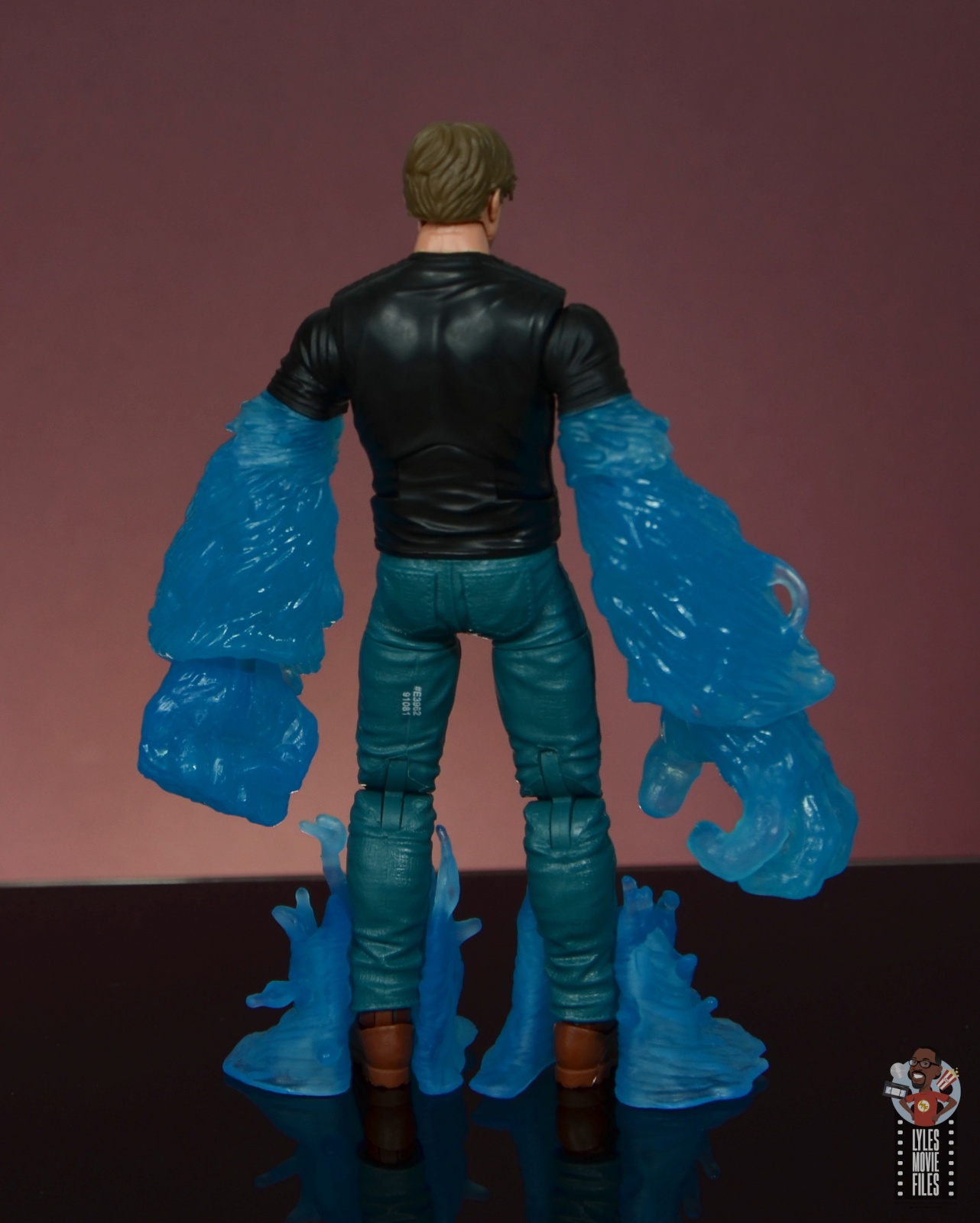 Additionally, he comes with the head for the BAF Molten Man. That’s sufficient for a random character, but I’m going to add a real comic version to my list of future Spider-Man rogues I want in this format. 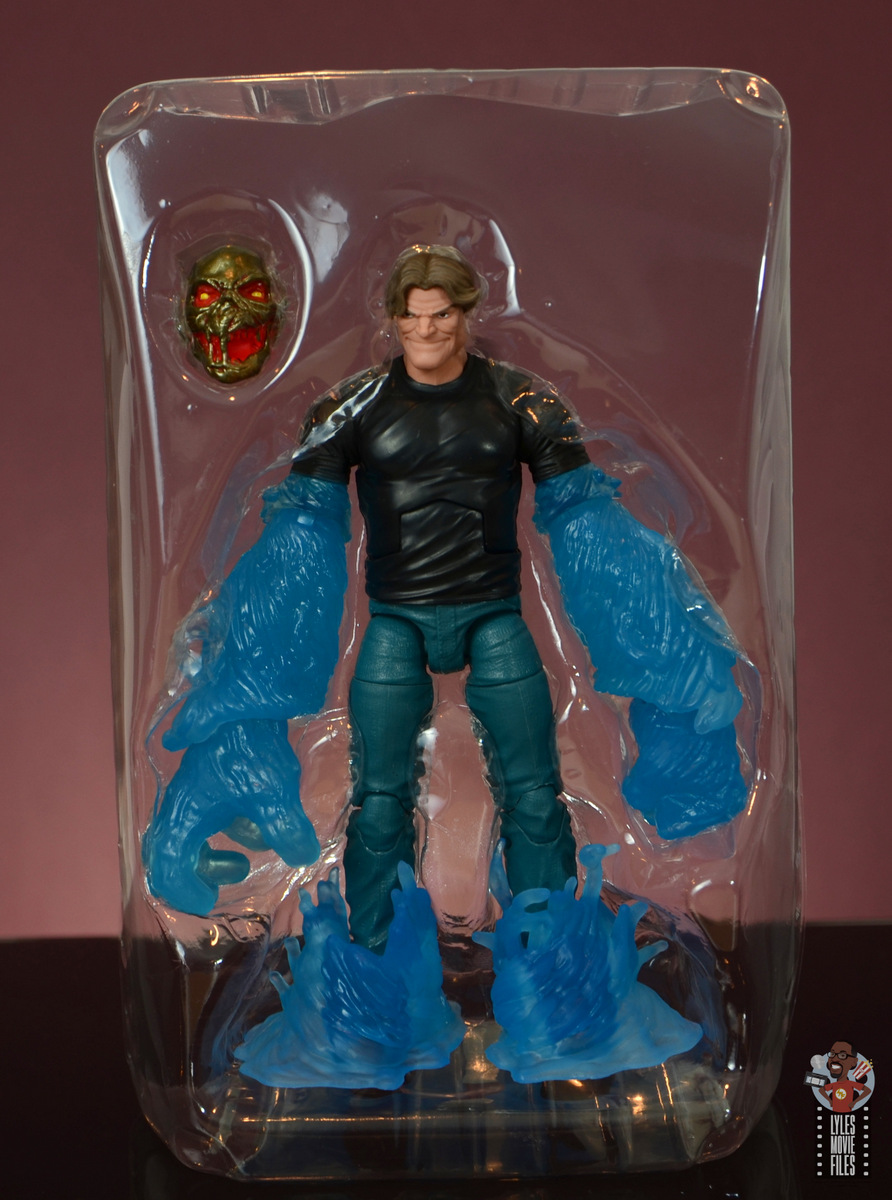 Worth it?  I got Hydro-Man on sale for $15, which is an excellent price point for Marvel Legends. The watery arms help add value for mostly a reused sculpt and he doesn’t benefit from having a sizable piece to the BAF. The value is definitely there for $15, but $20 isn’t bad for him either.  You can get him now for under $13, which is even better.

Hydro-Man may just be a goon, but he makes for a tremendously fun figure and a great addition to the Spider-Man villain shelf. 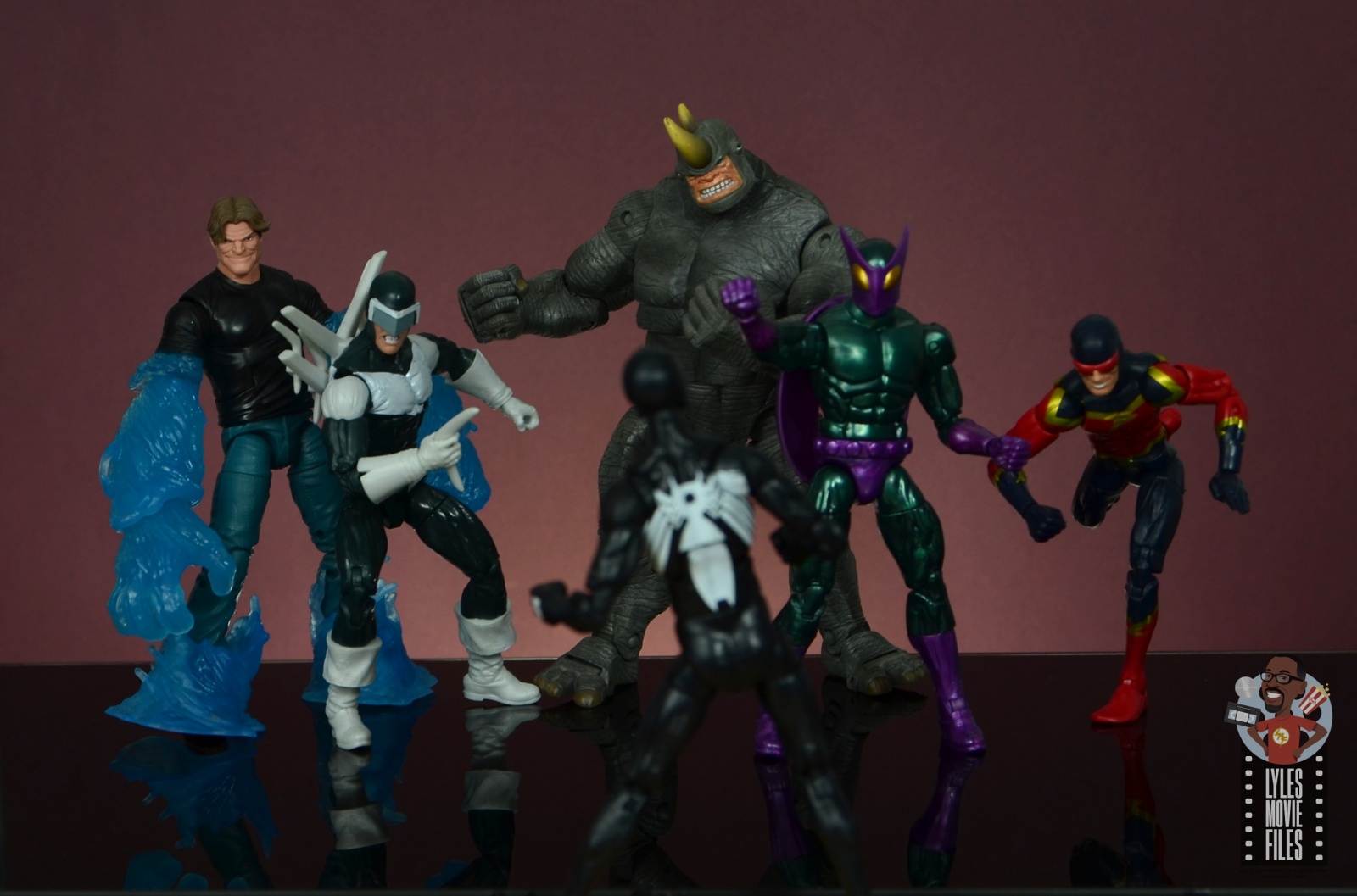 Where to get it?  The wave is available at Target, Wal-Mart and GameStop as well. Online shoppers can find him easily enough on Amazon, which has him so low, or Entertainment Earth and Hasbro Pulse.