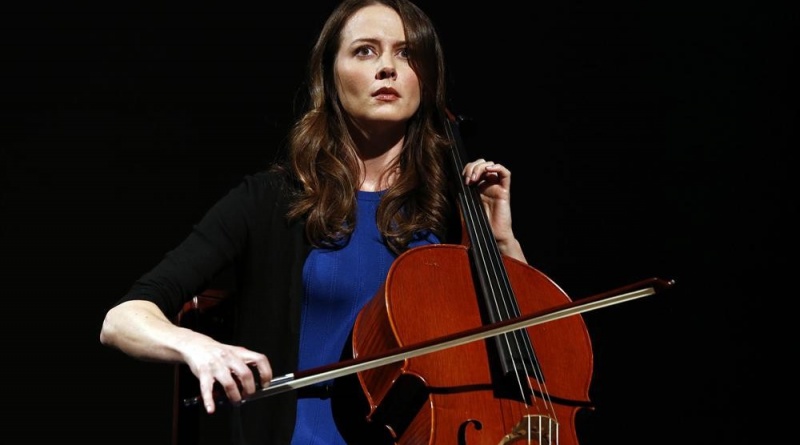 Sustaining consistency has been an issue all season for Agents of SHIELD. This hasn’t been a new issue, but The Only Light in the Darkness is easily the best example of that problem. It features one of the season’s best moments while trying to juggle a storyline that would be better suited for earlier in the year.

Among The Fridge prisoners Garrett and Ward freed was Marcus Daniels, who has the distinction of being one of the MCU’s first supervillain with powers after Abomination. He’s able to tap into the Darkforce, which will be discussed in far greater detail later.

Eric Koenig (Patton Oswalt) isn’t down with Coulson’s plan to take a squad to deal with the escaped prisoners unless they take a lie detector to verify they’re loyal to SHIELD and not Hydra. Fury wanted a lie detector test that even Romanov couldn’t beat. I like how Black Widow is the gold standard for everything SHIELD, which shows how essential she is to Fury possibly even moreso than Maria Hill. 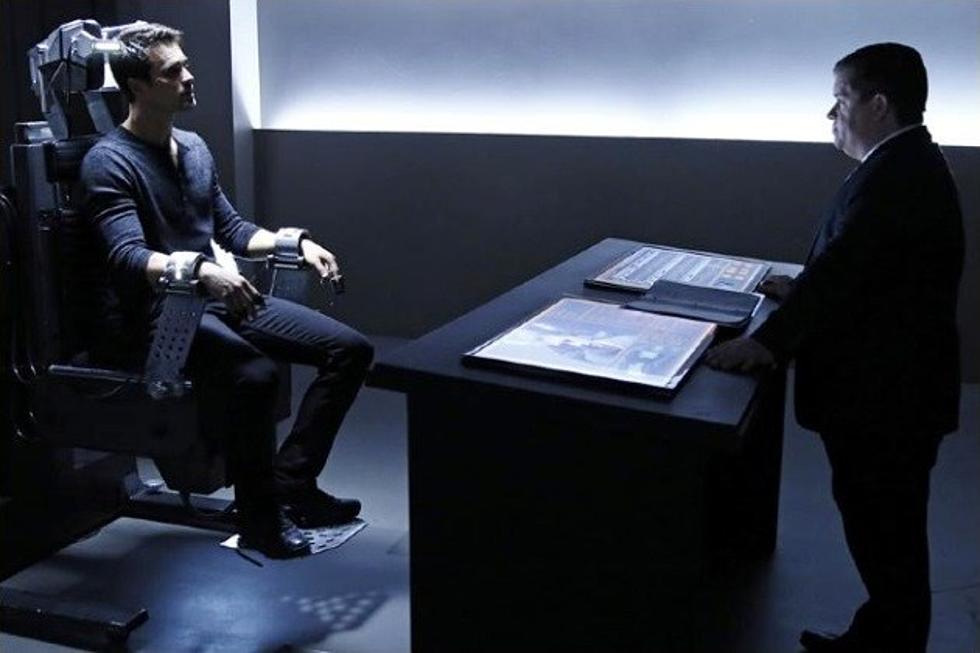 Of note during these sessions, FitzSimmons overthinks everything and Ward cracks the code by wedging a small nail into his side to keep his responses reading similar. Far more interesting was the reveal that Trip’s grandfather was one of Captain America’s Howling Commandos and that Garrett took occasional calls from Alexander Pierce as they were “old friends.” May also met Pierce and was familiar with him to some extent.

We didn’t need a lie detector test to know Fitz is jealous of Trip because he’s a hater and decided to shift his interest from Skye to Simmons. That’s an abrupt shift from earlier in the season, but I suppose it was making things too complex with the writers setting up SkyeWard.

Content that everyone is legit, Eric hands everyone a lanyard, which Skye deduces are just a means for Eric to track everyone within the HQ. Coulson is still pissed at May and wants her to either fall in line or bounce. This is some well earned tension as May acted as Coulson’s sounding board so he is still feeling betrayed despite knowing May isn’t Hydra.

Coulson takes FitzSimmons and Trip to take on Daniels as he knows exactly where he’s headed first — to a woman he was obsessed with Audrey (Amy Acker). Audrey happens to have a connection with Coulson too as she is the infamous cellist referenced in The Avengers. 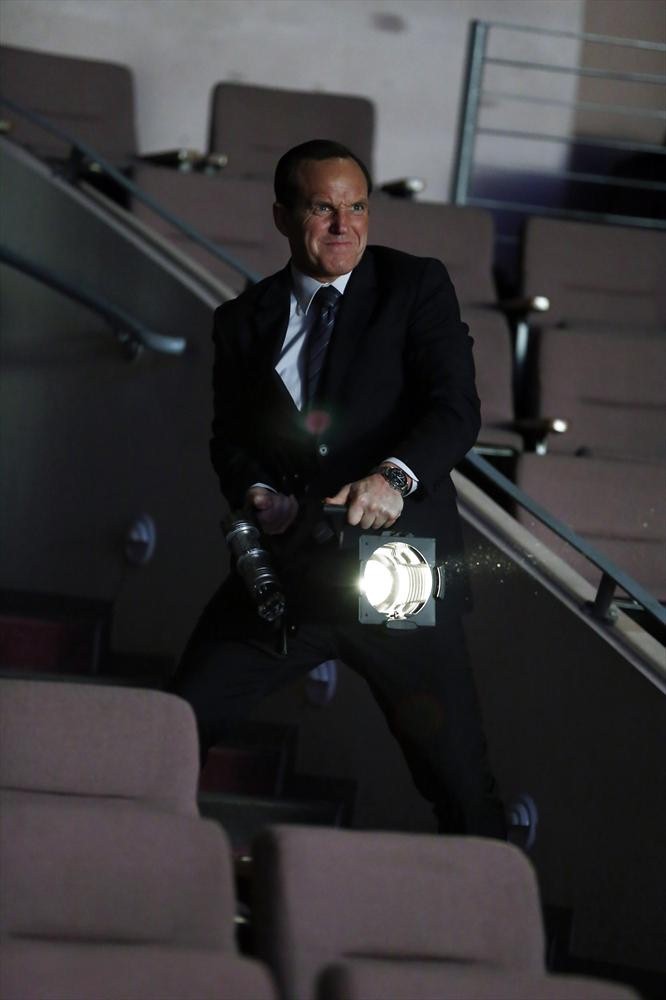 While he never lied to her, Coulson isn’t keen on telling Audrey he’s alive and has Trip and Simmons engage with her while Fitz whips up a gadget to stop him. Essentially he rips off Ghostbusters with a proton device using gamma ray technology off of Bruce Banner’s work. FitzSimmons and Trip go after Daniels using Audrey as bait, but it takes Coulson helping to stop him. Luckily for him, Audrey gets knocked out when he comes in for the save. Simmons asks on Trip’s behalf if he did something to offend Fitz, who ignores Ward’s advice to tell her how he feels.

Back at the hideout, May is tired of trying to get back in Coulson’s good graces and leaves. Skye and Eric decide to access CIA satellite imagery to get the footage from The Fridge. Naturally, Ward knows that can’t happen as Skye will see him kill a bunch of agents alongside Garrett, whom he allegedly killed.

Everything’s coming up roses for our boy Grant Ward until Eric excitedly tells him the CIA feed is almost completed. Time to act fast! Ward does get a little make out session with Skye until she notices some blood on his neck. #Moodkiller. While Ward cleans up,  Skye decides to look for Eric via his lanyard and finds him in the janitor room’s ceiling.

Chloe Bennet does some fantastic work here with Skye’s breakdown over realizing Ward is Hydra. This was great, but it almost felt like they left a little suspense on the table by not having Skye suspect May, who’d already left. Reunited with Ward, Skye plays along long enough to confirm Ward is Hydra when he says he talked to Eric and he wants her to go with him to a site so she can unlock the drive. This was easily Skye’s best scene of the season. 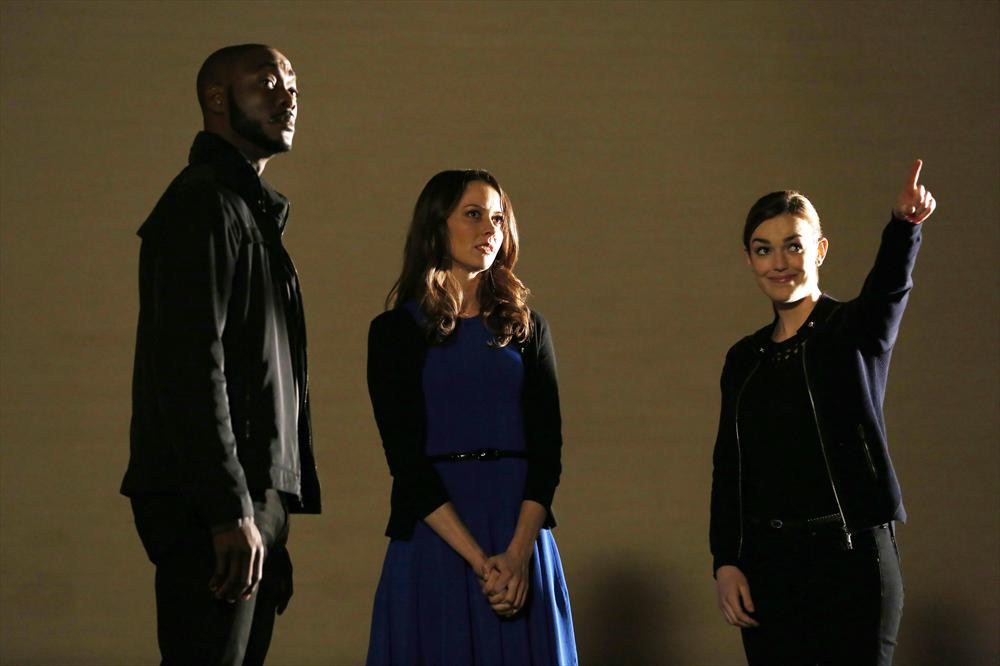 In the post-credits scene May gets picked up by her mother, a CIA agent, who has some intel for her on Maria Hill. Makes sense to go to the big guns to help Coulson even if he doesn’t want it.

The Coulson/Audrey subplot really should have played out earlier in the season. It would have required another excuse to separate Coulson and crew from May and Skye, but it was an emotional beat that took away the urgency from the Hydra uncovered plot. Still, this was another solid episode of SHIELD with the Ward reveal to Skye.