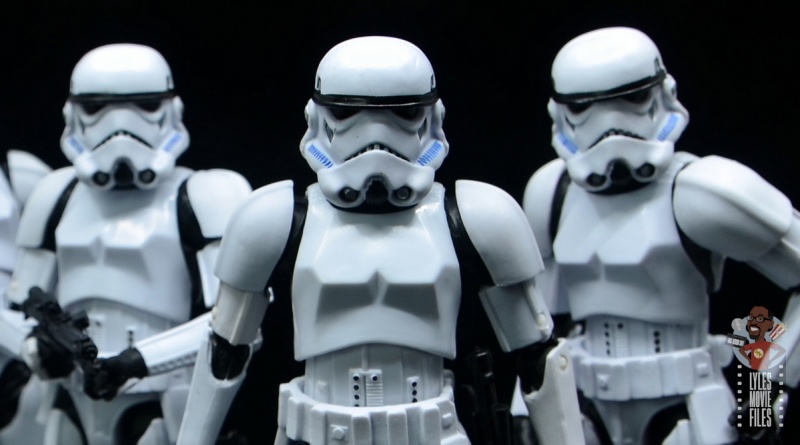 This isn’t a new figure by any means, but I packed a slew of these guys when I moved and now have the chance to display an actual decent size army I’m taking a review look at the Star Wars The Black Series Stormtrooper. Spoiler: I liked it enough to army build.

Packaging: This was #09 in the series before Hasbro settled on the packaging they still use for the line today. I kinda liked the old package set up better with its wider window, orange stripe in the back, a smaller portrait on the front and more of an action shot on the back. The bio seems a little more detailed as well.

Likeness:  I really like this figure for a ton of reasons. It looks like a set of flexible armor with minimal protection from actual blaster fire. Clearly, The Emperor preferred an intimidating look over actual functional armor. 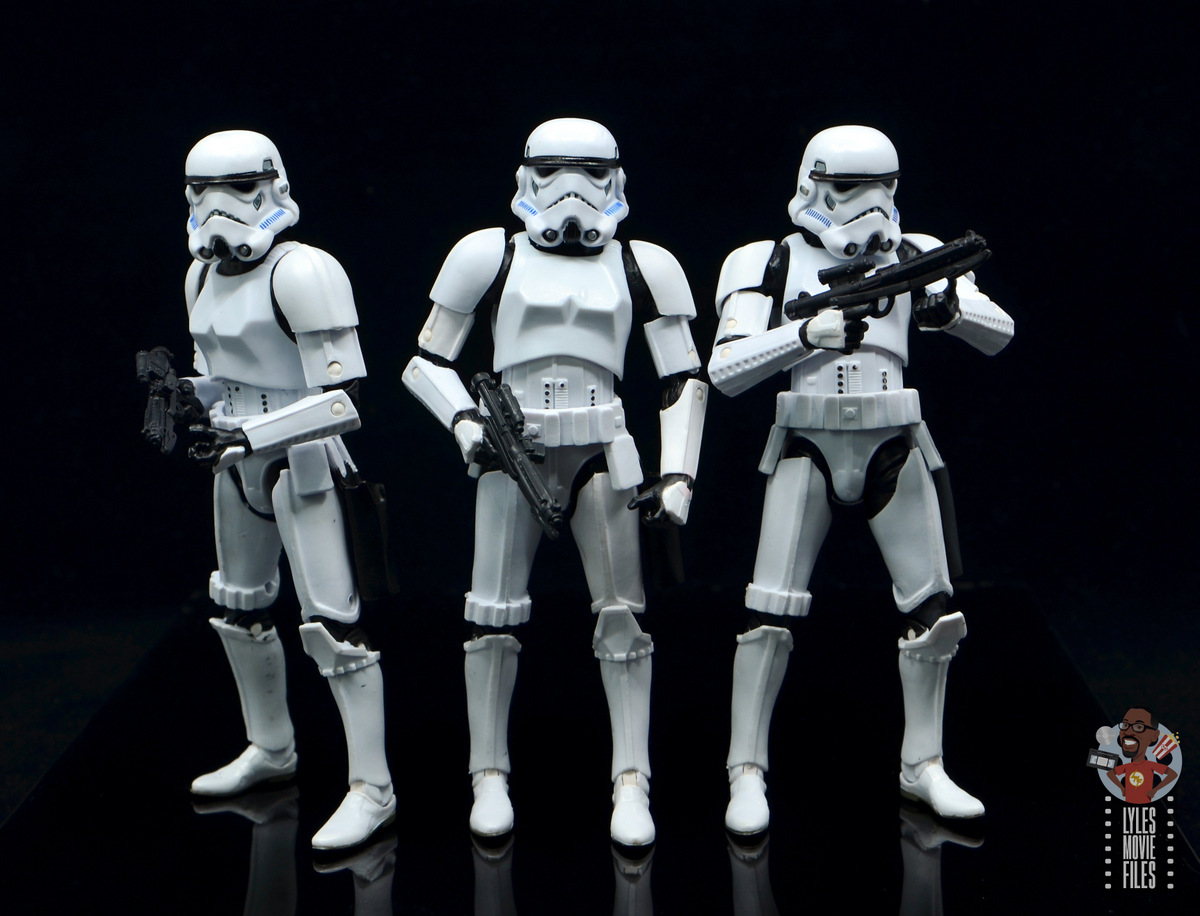 The helmet is the showpiece of the figure and it looks great with that iconic design firmly intact. The rest of the armor plating is nice and precise while the black body piece has the respective lining. The belt has a holster that holds the main blaster and is positioned so it doesn’t hinder the articulation. 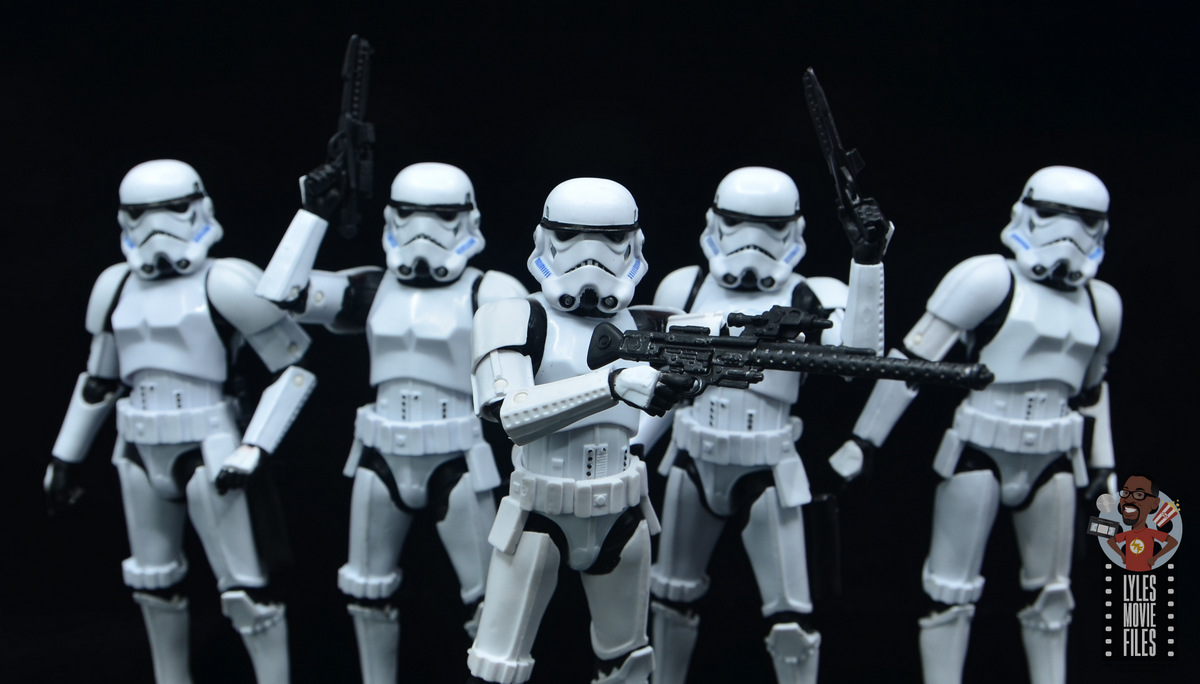 Paint:  There’s not a lot of obvious paint details at first glance, but there is some subtle work done on the Stormtrooper. The blue lining along the cheeks and the small buttons along the waist came through with no problem.

Scale:  The Stormtrooper is scaled just right. It looks like the SWB Han Solo could actually wear this outfit while managing to be an even better fit for the SH Figuarts Han.

Height wise, the Stormtrooper looks like he’s got helmet that would comfortably fit a human head.

Articulation:  The Stormtrooper has a great range of movement for walking target practice. Only the torso and shoulders are very restricted thanks to the design. 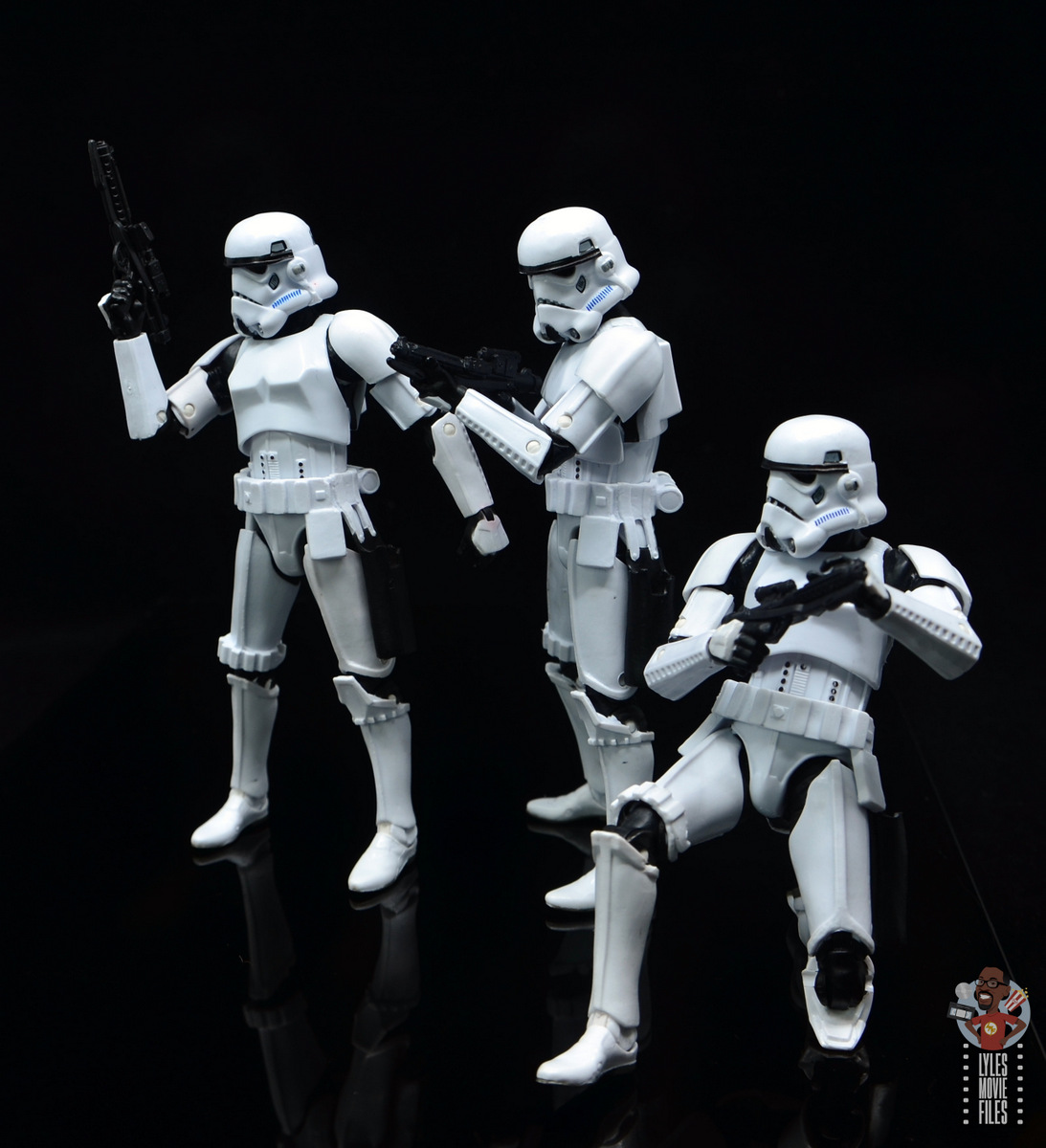 That doesn’t really limit reasonable Stormtrooper poses though and you can come up with all kinds of aiming and getting shot poses with them. The helmet moves very well allowing for some surprisingly expressive poses as a result. 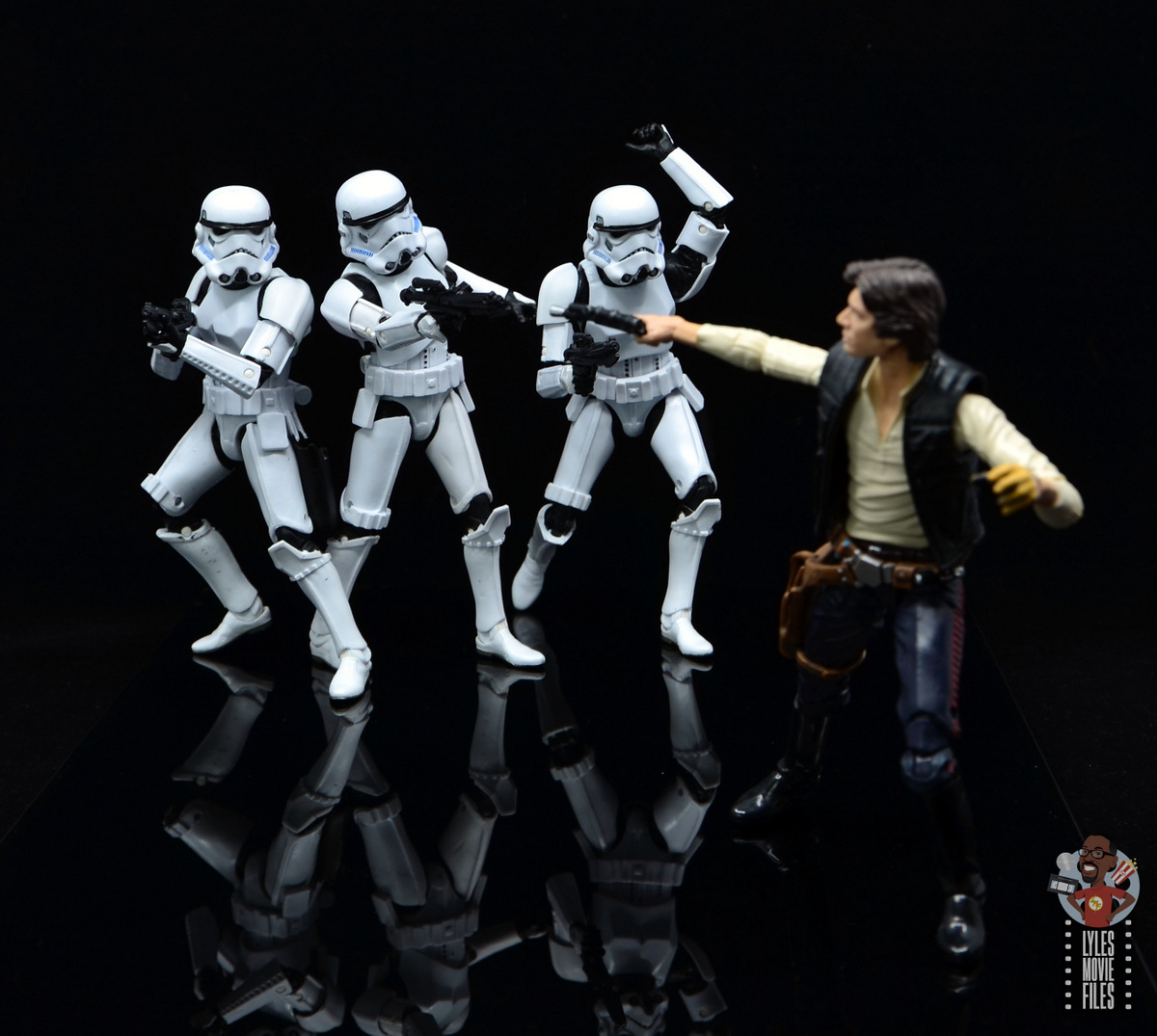 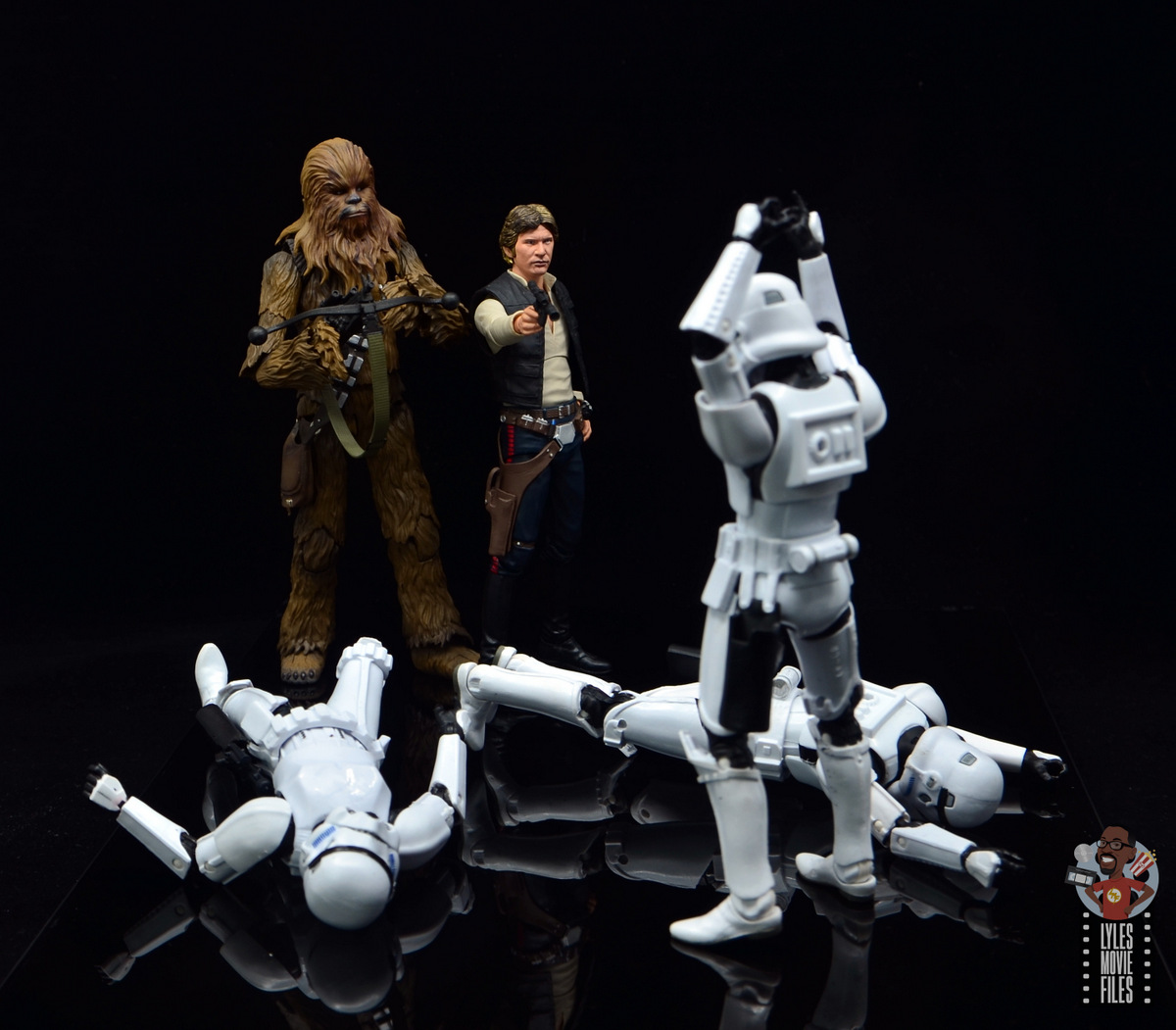 Accessories:  Stormtroopers come with two guns — the traditional blaster and a longer rifle. The blaster fits into the holster. 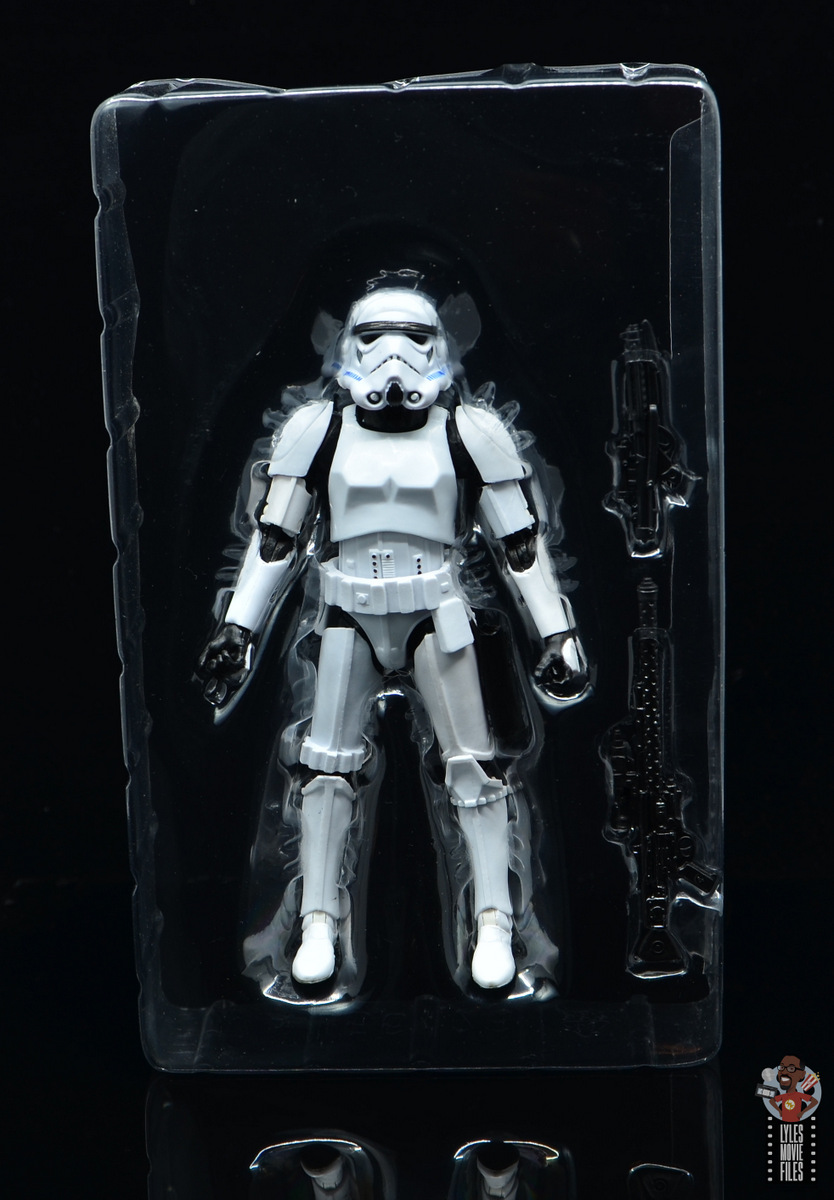 The rifle is cool to break up the mix of characters, but I’m probably just going to keep my crew with the smaller blasters. Still, I appreciate the option of an additional weapon. 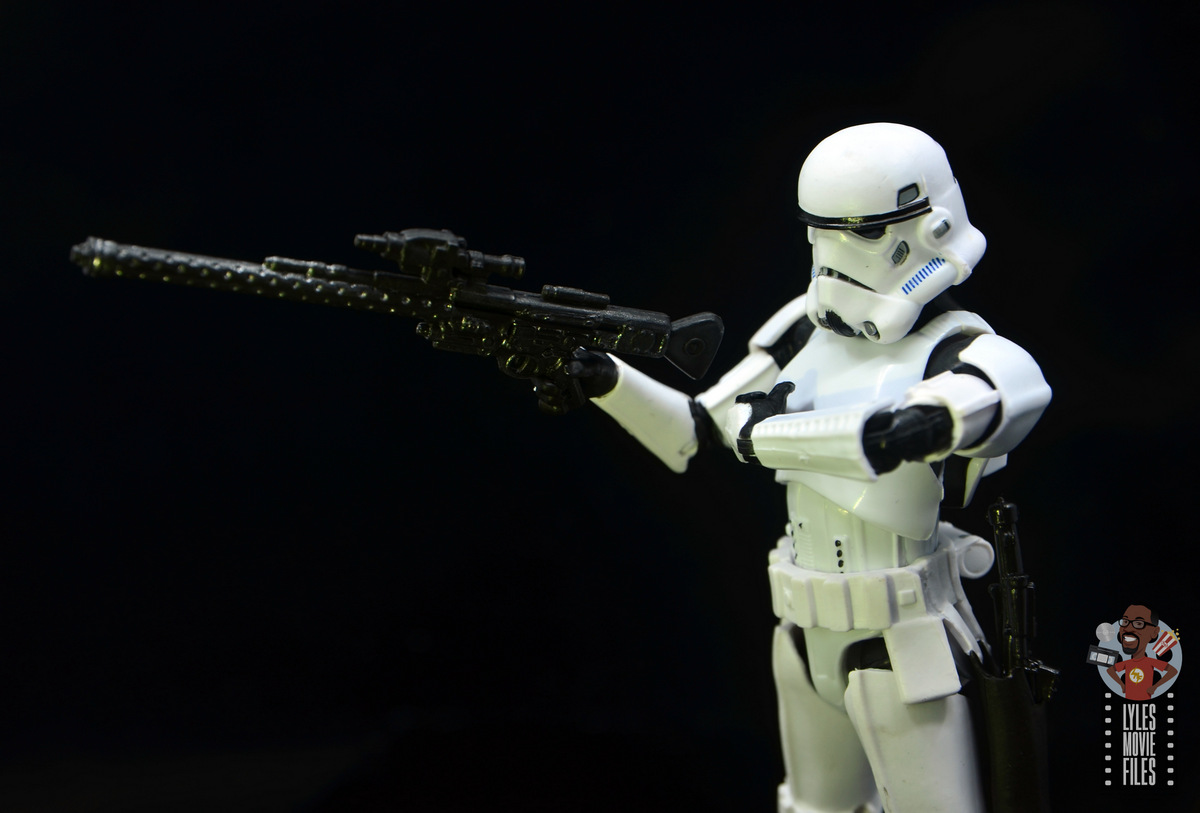 The only other accessory that might have been cool would be a separate chest plate with blaster scorching.

Worth it?  I grabbed a bunch of these guys for $20 and likely under thanks to some retailer deal. Now you’ll have to pay $40. Hasbro probably should float these back in army builder rotation a la the Hydra soldier for folks like me who wouldn’t mind adding more for $15. 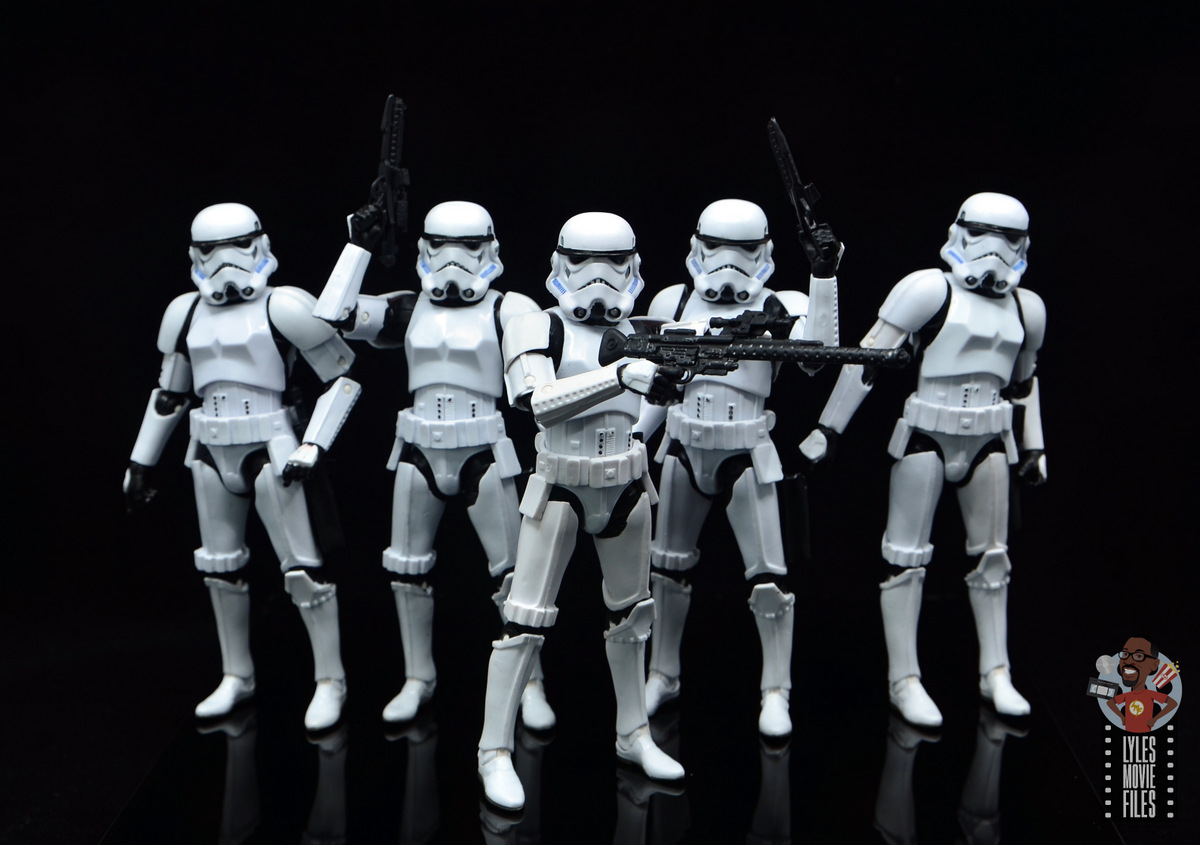 No complaints whatsoever with the Stormtrooper. And it’s nice to have a bunch of these guys. Now to decide which Darth Vader to surround them with on my display. 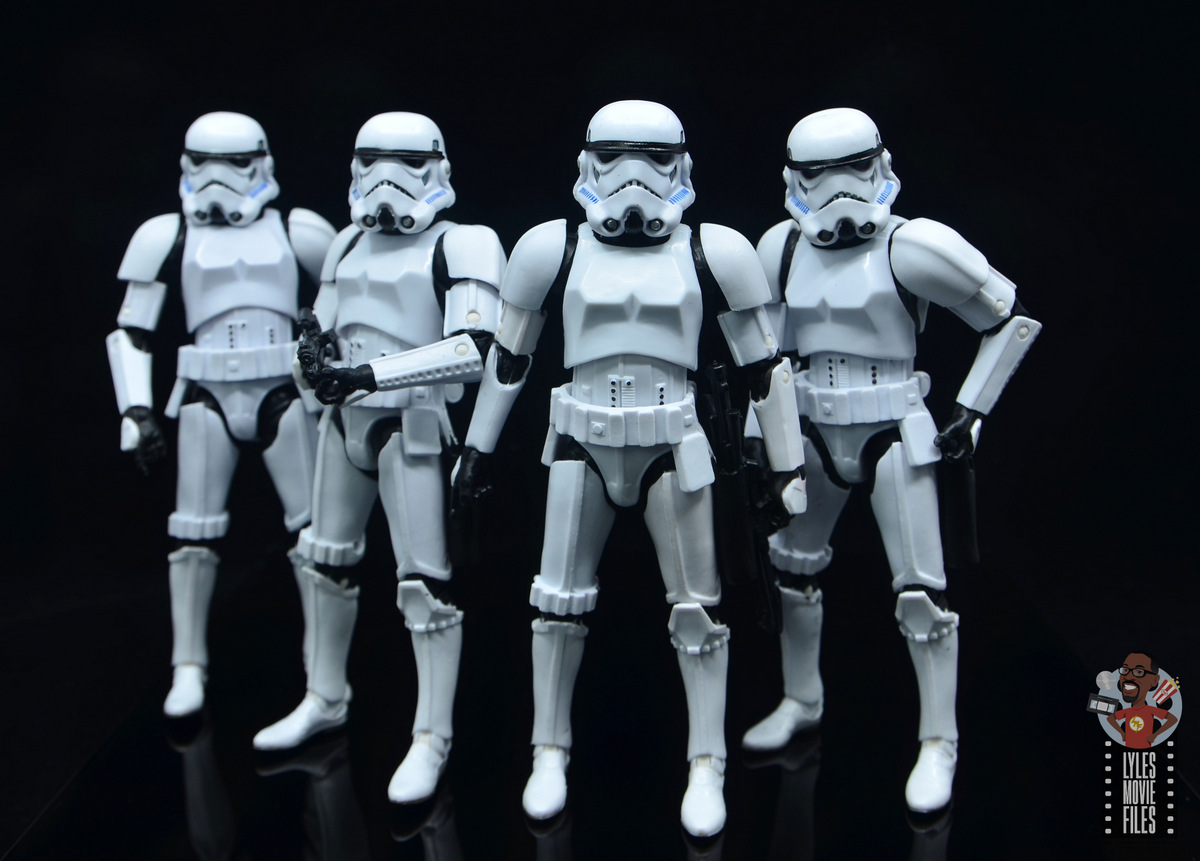 Where to get it?  At this point Amazon is your best bet until Hasbro realizes money is being left on the table not having Stormtroopers on constant rotation.