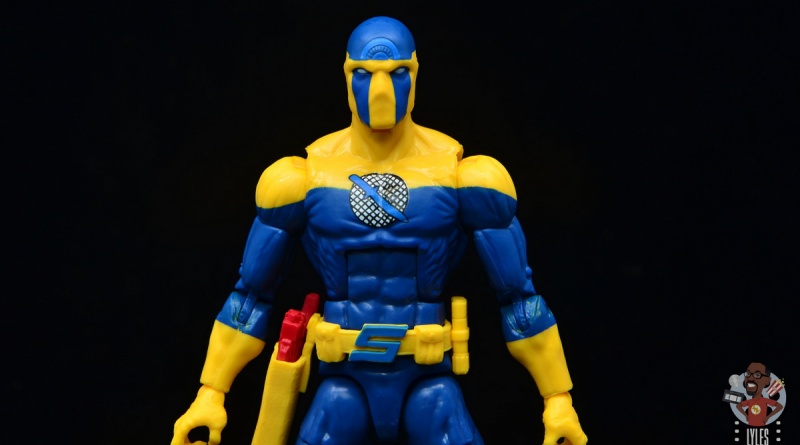 I love when Hasbro can do some deep diving into the Marvel Universe with the Marvel Legends line. Whether you consider a villain like Spymaster a B+ or C-level villain it’s hard to knock Hasbro for expanding the ranks of punching bags for Iron Man and Captain America. And it’s easy to appreciate the fun of including a character like Spymaster into the Black Widow wave. Let’s see if I need to spill all the juicy details on this figure.

Packaging: This is the standard Marvel Legends packaging with a black and red color scheme fitting for Black Widow. I really like the side though as it has this funky 70s SHIELD Steranko art vibe with the Marvel logos on the white background against the sharp colors for the character. 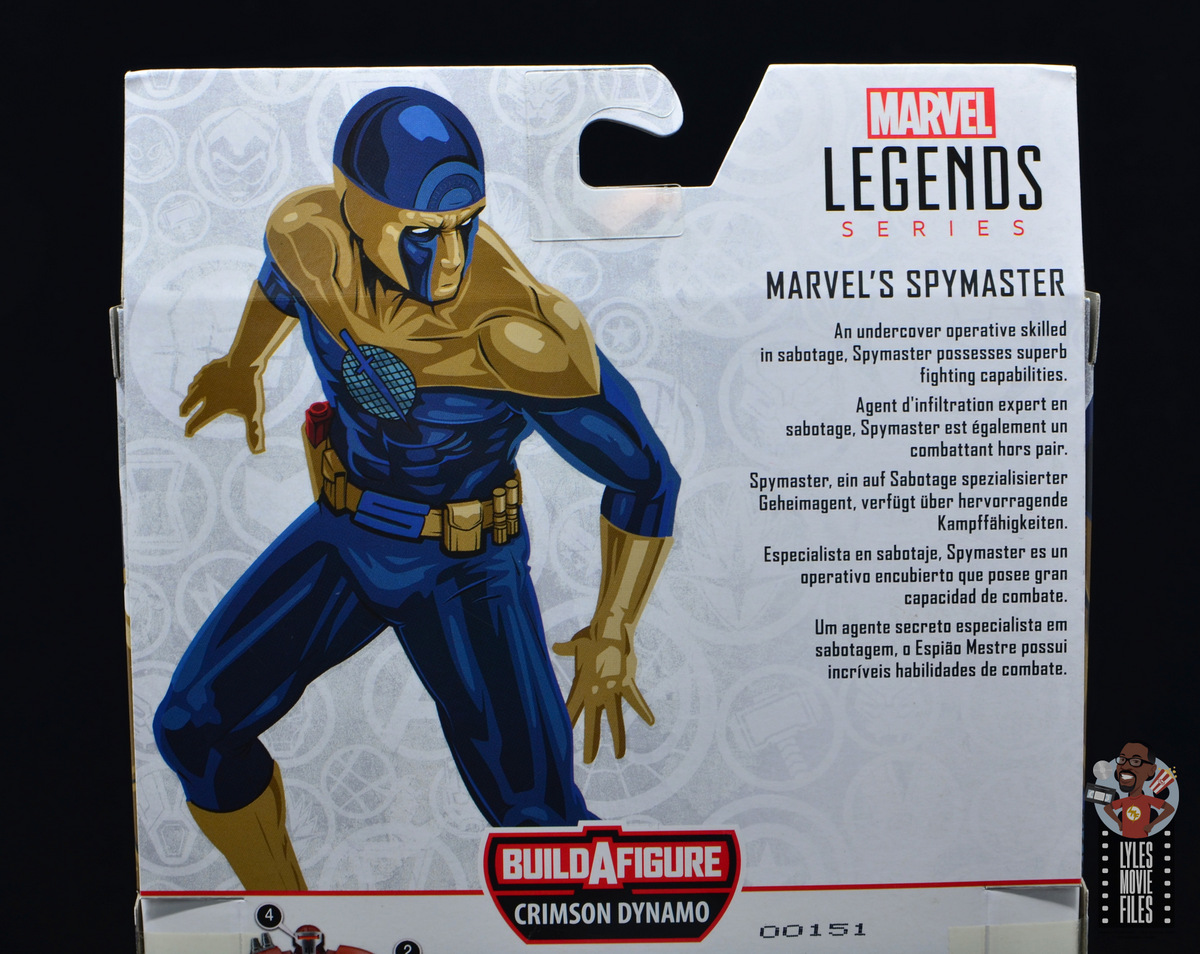 You can see the full setup on the back, which as always doesn’t have the most extensive bio. I like the comic art instead of the usual figure portrait.

Likeness: Spymaster just has a cool look. In part it’s due to a unique color combination and clever arrangement of gear without going too overboard with the details. Hasbro did work in the half circle on the mask, but skipped the pods on the gloves and half circles on the boots. In fairness some artists didn’t include either of those consistently so it’s not necessarily inaccurate. 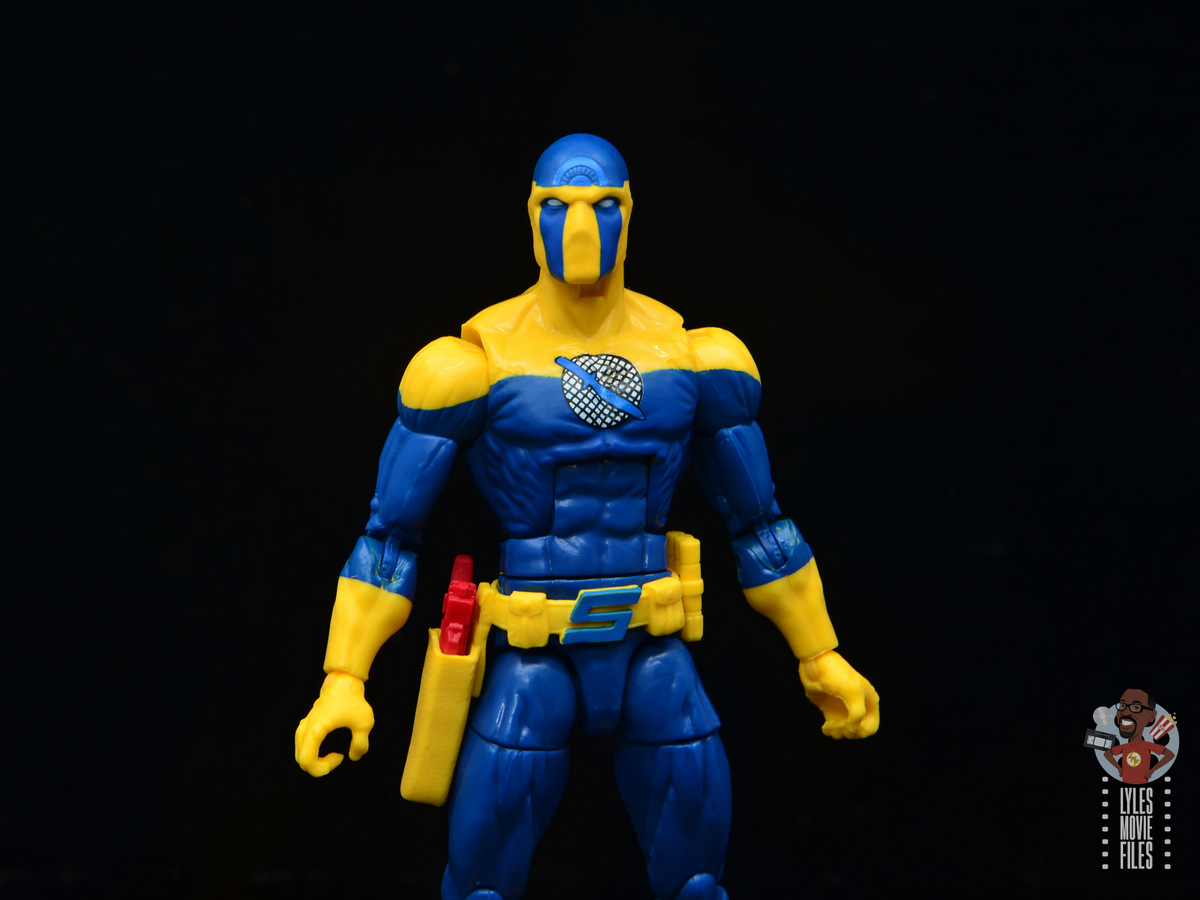 Most of the detail is accomplished via the paint job, but Hasbro did correctly handle Spymaster’s belt with the lower holster on the right side, the dynamic S and higher ammo left section. 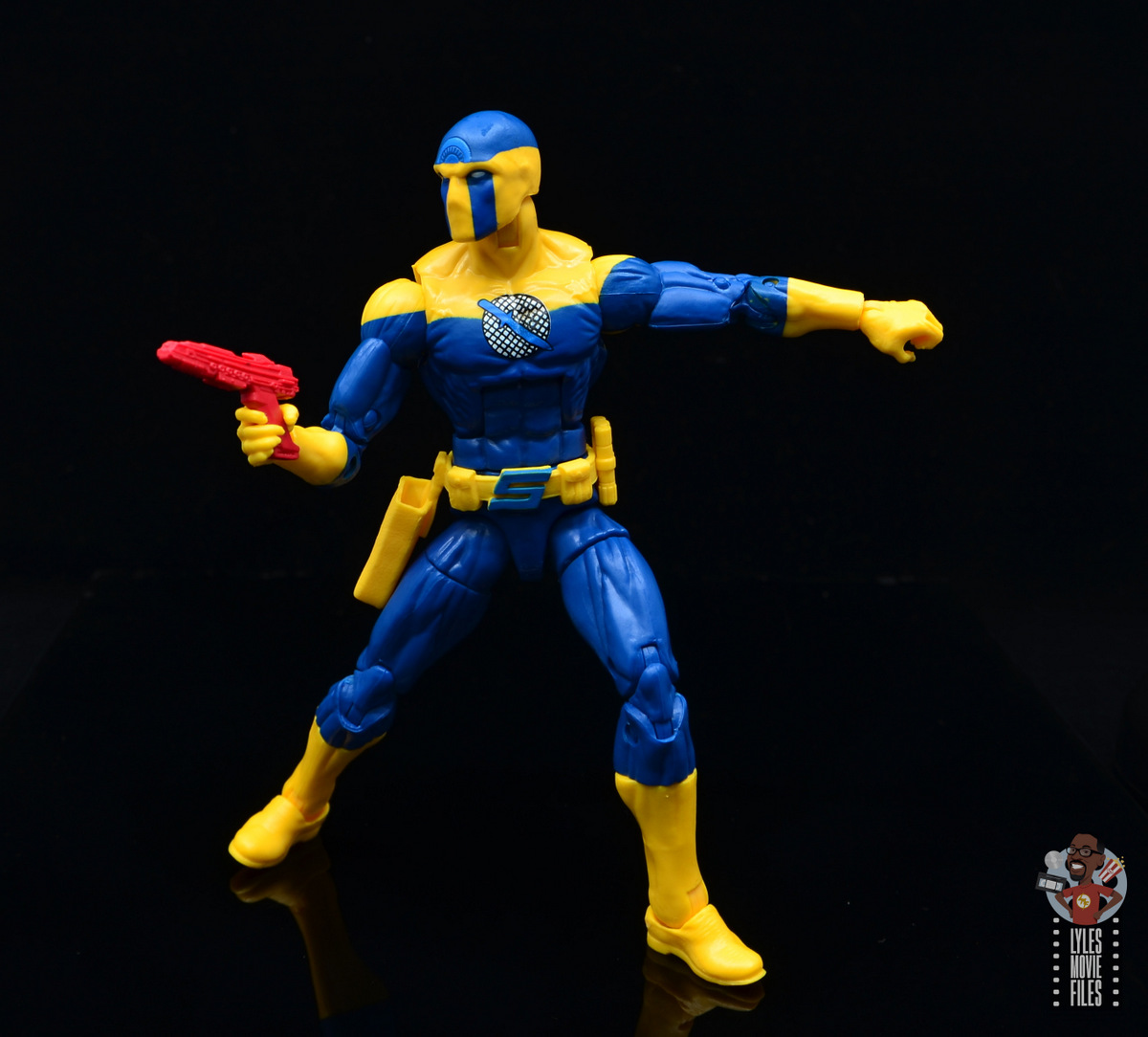 There’s something about the mask with the sorta sinister looking sunken eyes that really conveys the mystery man vibe of the character.

Paint:  As much as I like the color combination, Hasbro went darker than necessary for the colors. Spymaster’s costume features more of a turquoise instead of a vibrant blue. It’s a case where if you didn’t have the comic as reference this wouldn’t be a big deal, but Hasbro missed the mark on the colors.

All of the exact details like the knife over the globe, the eye “tear trails” and the S buckle are very sharp.

Scale:  Spymaster uses the Bucky Cap mold. I probably have 50 figures with this mold, but there’s enough differences that it doesn’t look like the exact same figure. 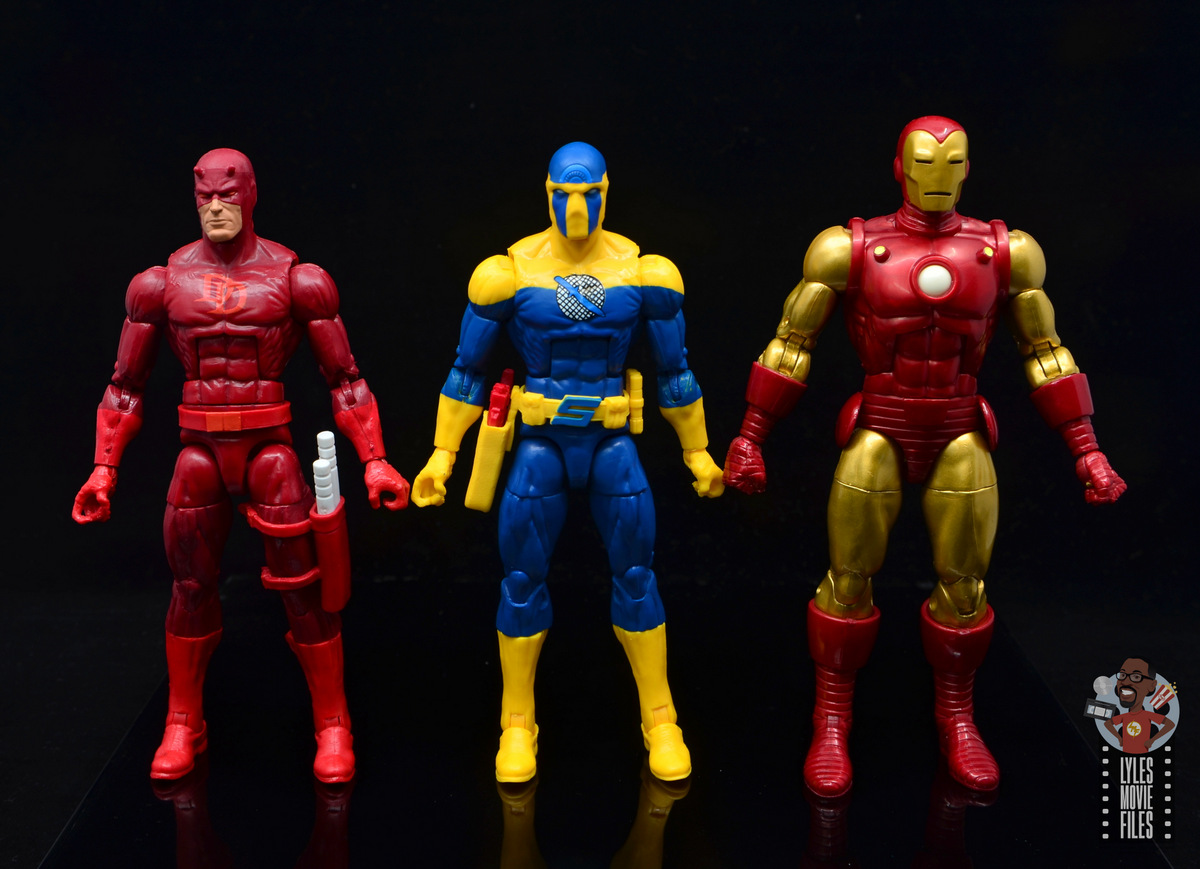 He might be a tad small compared to some of the issues he’s appeared in. I wonder if the Spidey UK mold wouldn’t have made for a better fit for Spymaster’s physique. 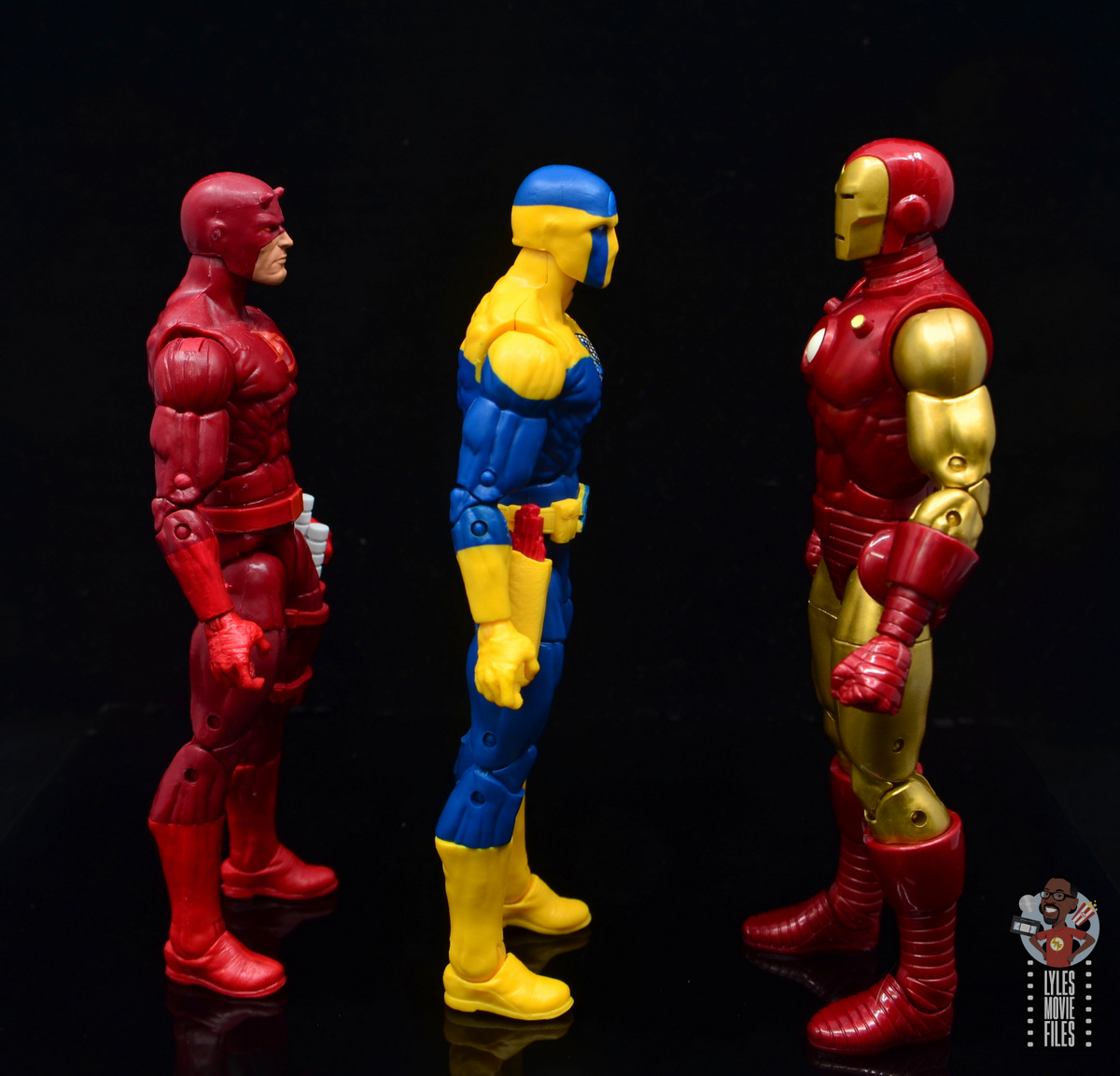 Articulation: The Bucky Cap mold doesn’t lack for articulation and it’s a good one for range or melee fighters. It’s solid for pretty much any kind of movement you’d need for a guy fighting Iron Man. 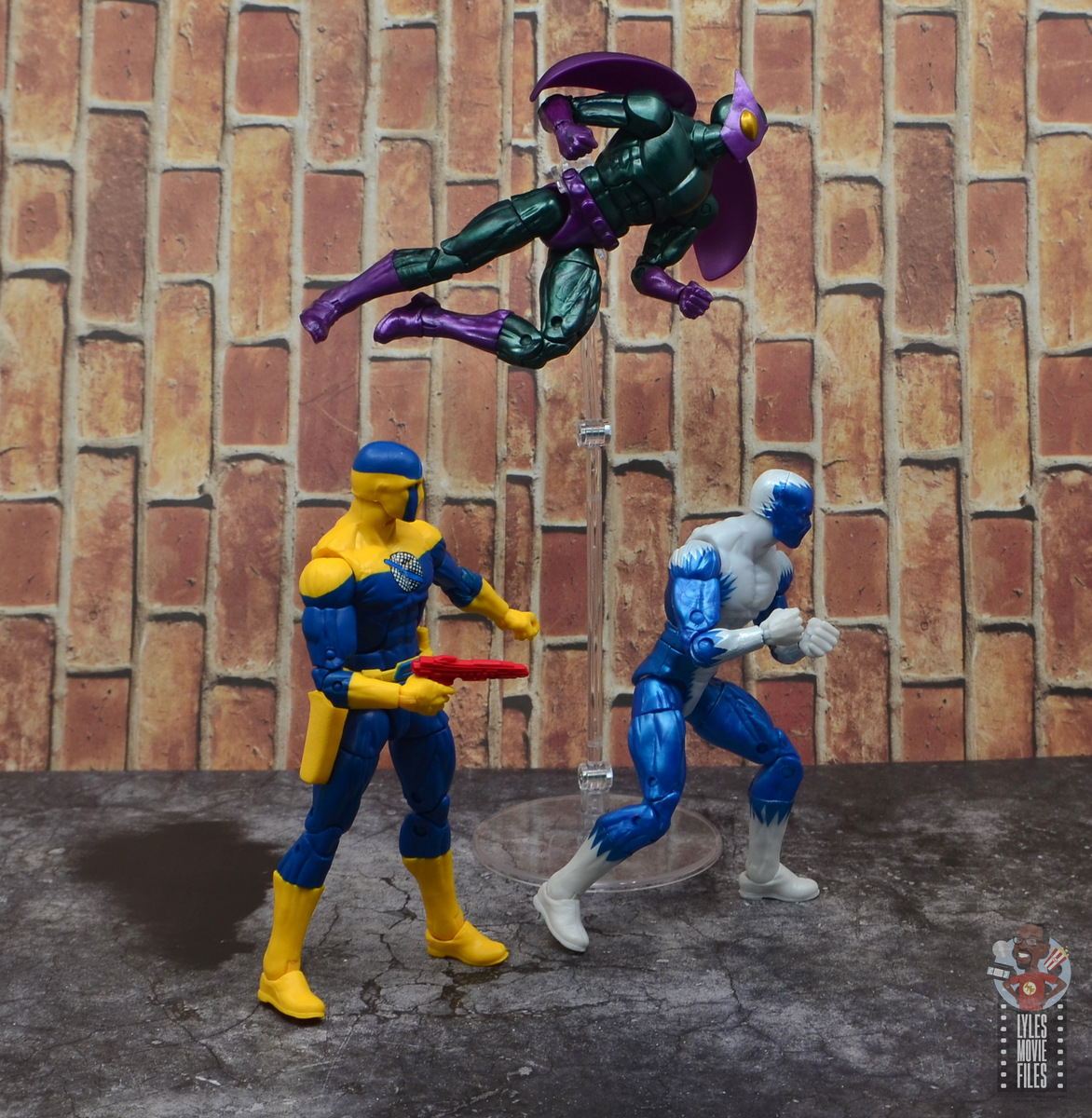 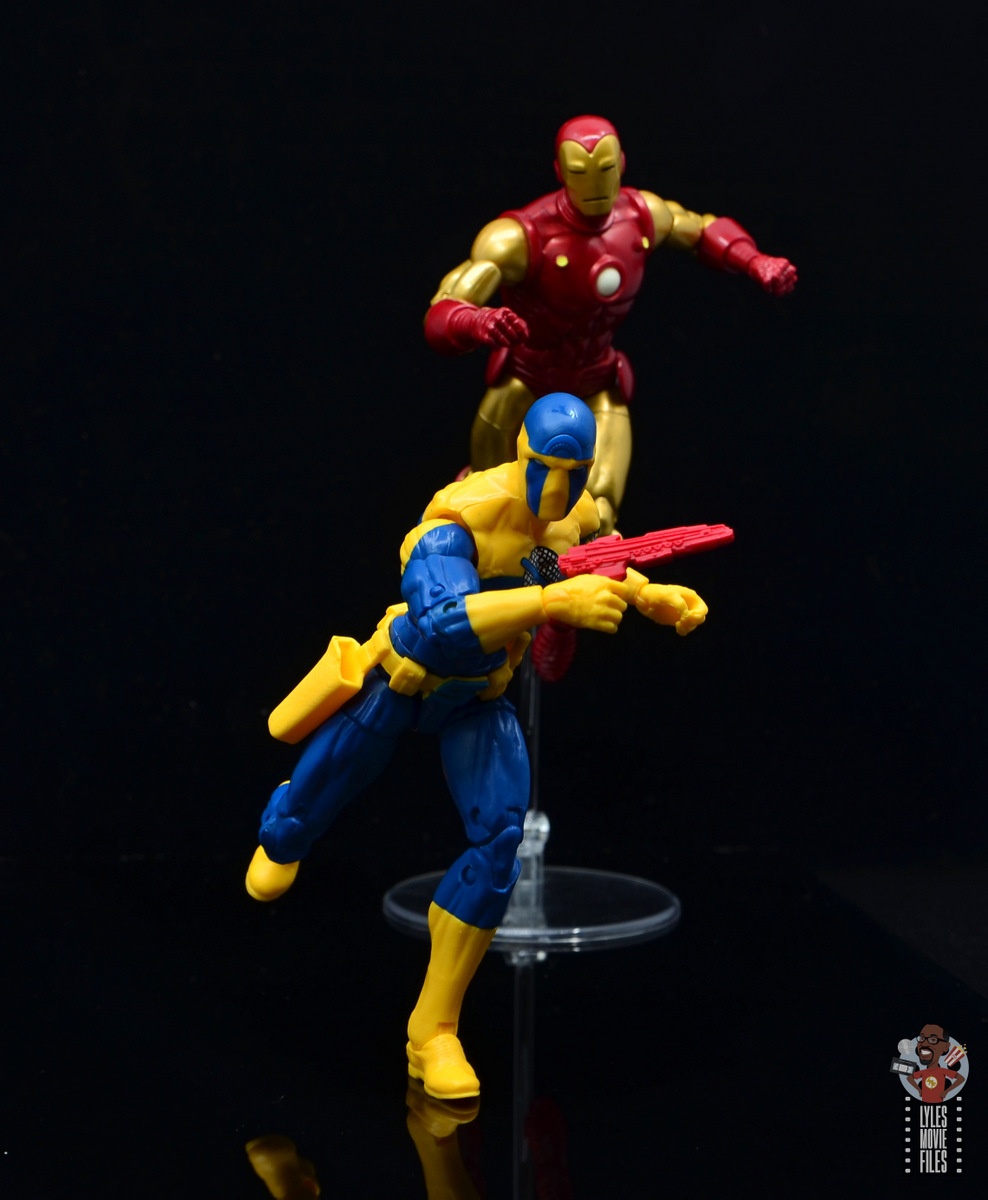 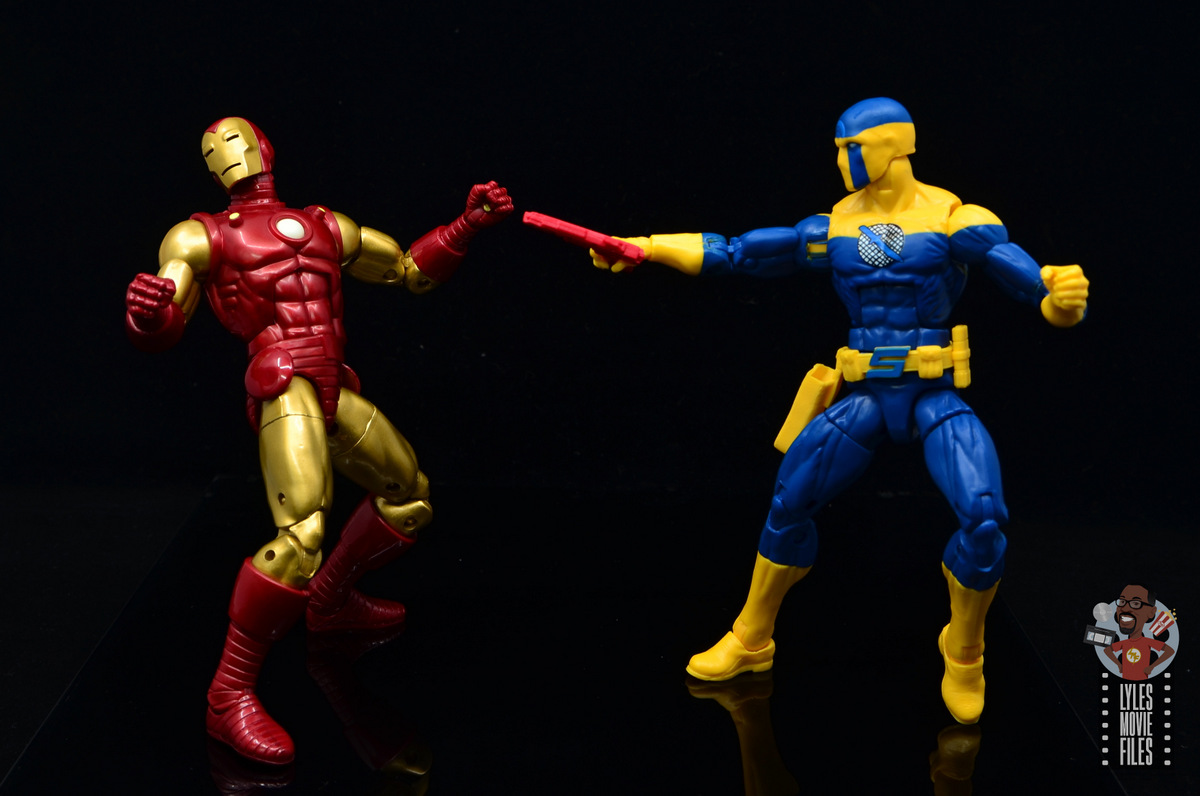 Accessories:  Spymaster comes with a blaster to gun down Shellhead. It’s a reuse of the cool space gun that originally cane with Yon-Rogg painted red. It fits into the holster nicely. 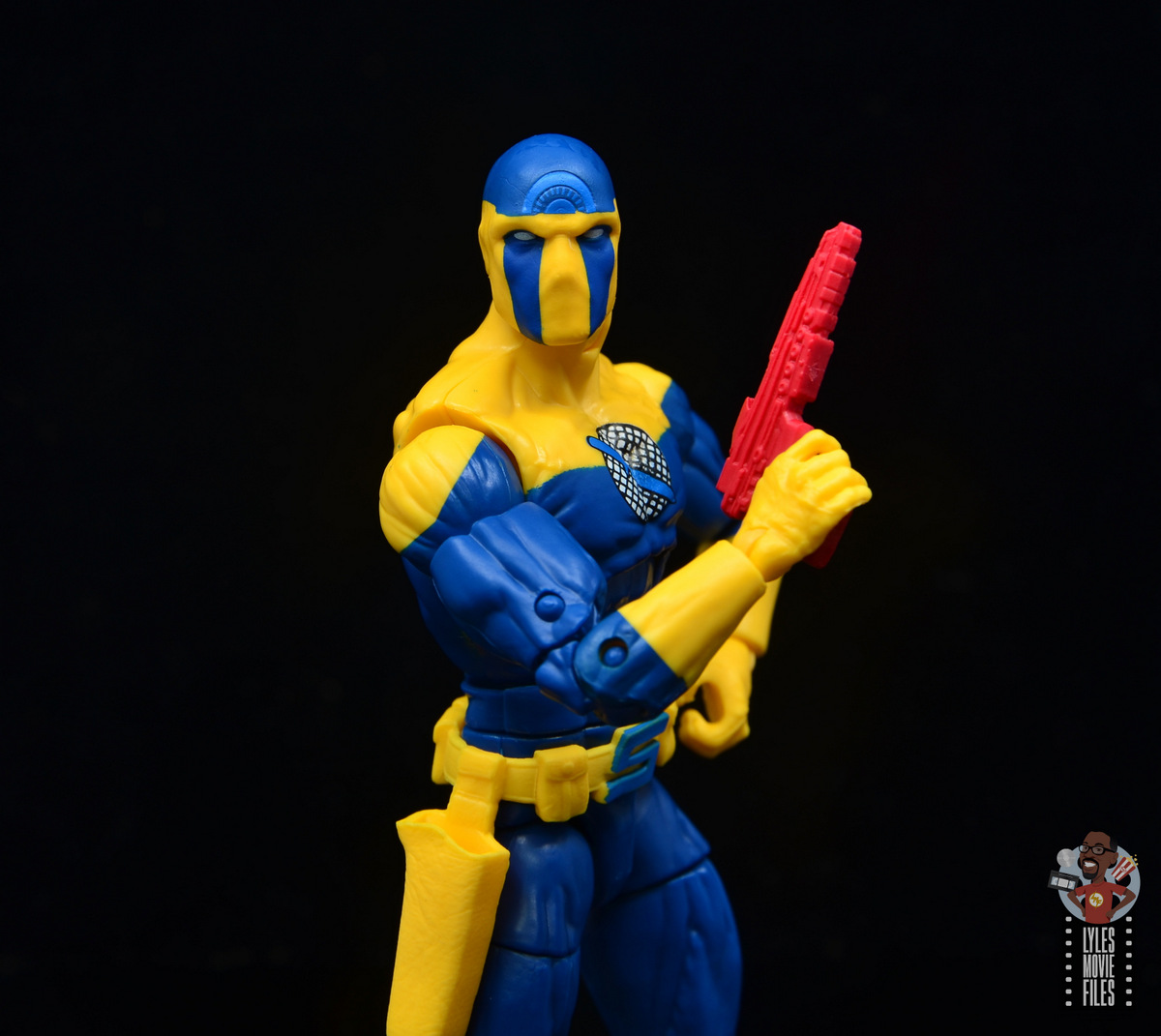 Additionally, he comes with the right leg of the Build-A-Figure Crimson Dynamo. 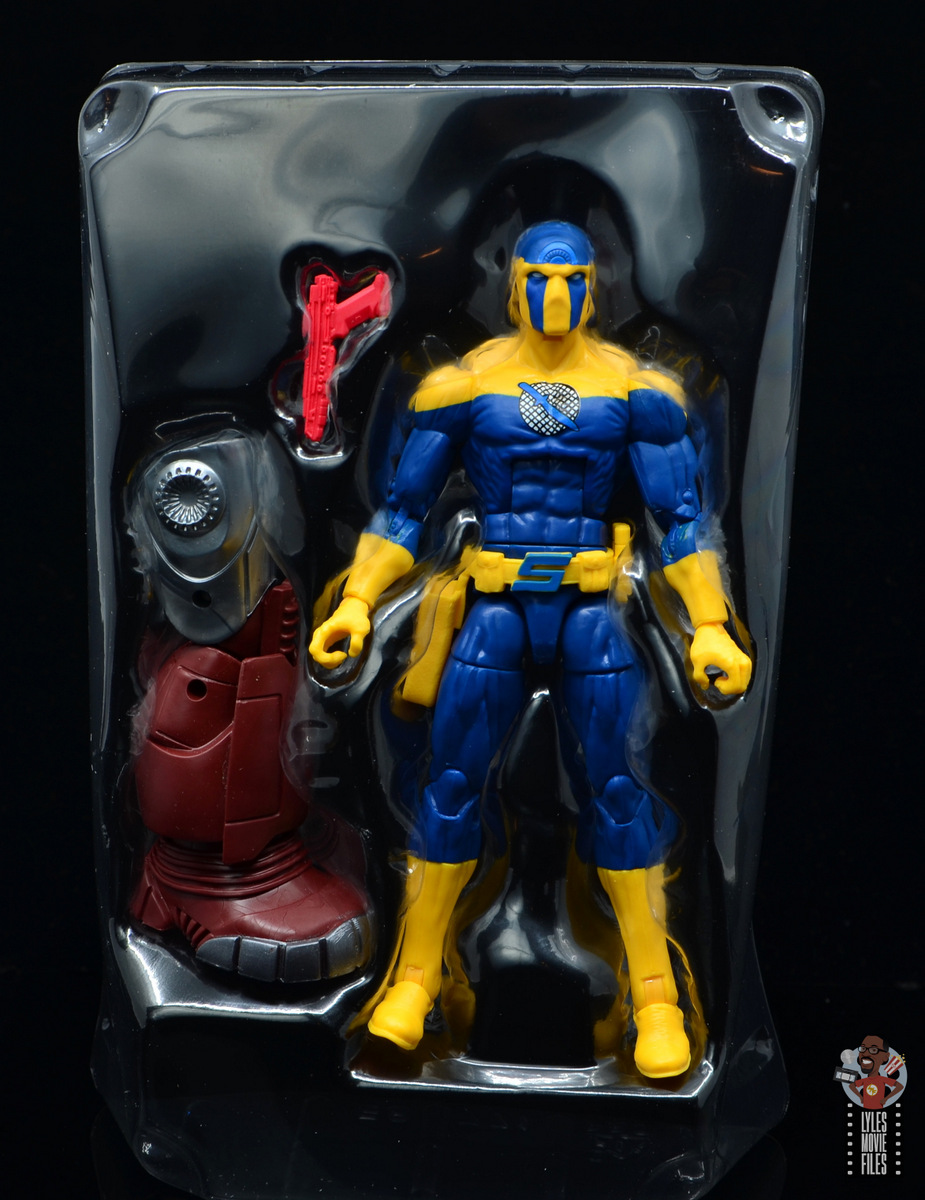 Worth it?  I picked up Spymaster for $20, the going rate for this line. No argument here. 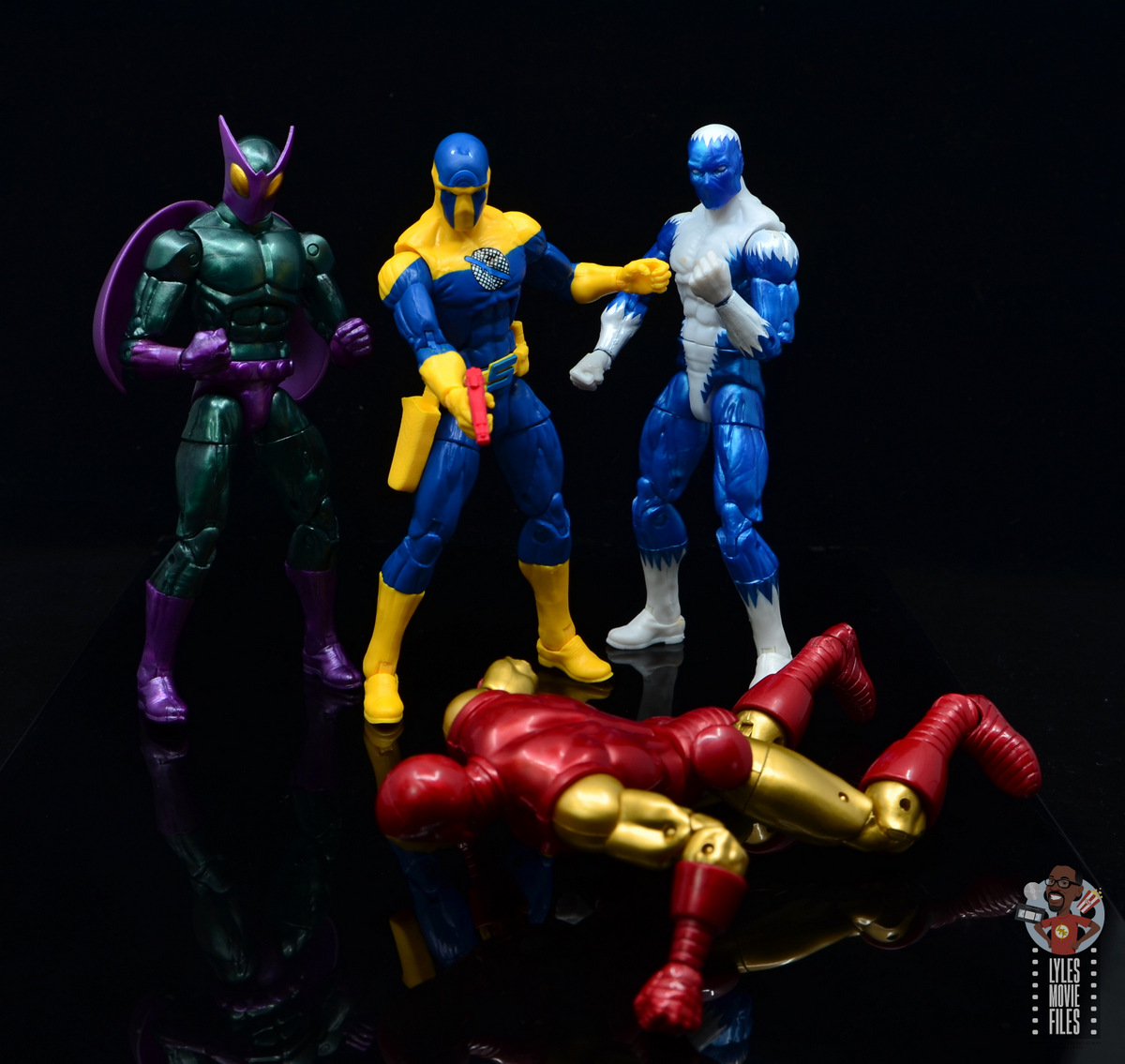 Where to get it?  Spymaster is available (theoretically) at stores like Target and Wal-Mart now…if your area is open. To avoid any funny stuff you might be better off just going the online route at Amazon, Target or Entertainment Earth.