On the surface Stargirl seems like just another Arrowverse show with a cute blonde lead, but if the premiere was any indication, it might be exactly what the DC Universe and Arrowverse needed. Spoilers ahead.

This might be a function of the series premiere, but the opening sequence of the Justice Society of America vs. The Injustice Society was amazing. The action was definitely closer to movie level than low level TV series budget. My one gripe and it’s pretty significant is how the death of the JSA affects how Stargirl will play out.

Showrunner/writer Geoff Johns helped usher in a new generation of heroes during his amazing DC Comics run on JSA. The beauty of the book was the multi-generational approach with old veteran heroes who fought during the WW II era teaming with their former sidekicks that have become heroes in their own right working alongside the third generation of young heroes just learning the ropes. It was a sensational dynamic that felt uniquely suited to DC as Marvel didn’t necessarily care about the generational legacy aspect of superheroes.

Granted, we didn’t see the bodies of every presumably dead JSA member notably Johnny Thunder and Green Lantern — the lightning and green flame effects were an excellent touch — so there’s a chance there could still be some mentor characters. I just wonder if going with an entire Junior JSA is the right call. Especially since the costume designs look as good if not better than anything we’ve seen on the big screen. 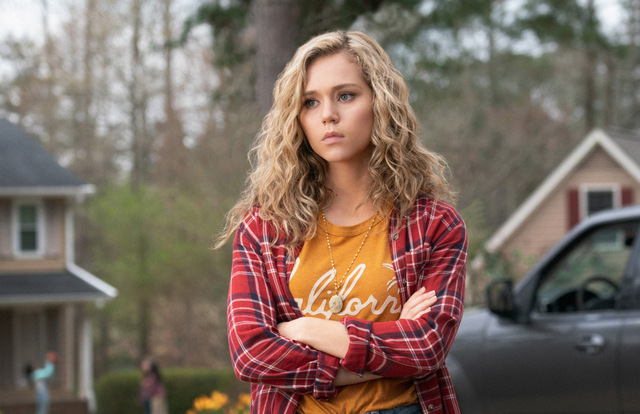 The obvious question is how the Junior JSA can take out a villain squad that’s ruthless enough to kill off their far more experienced predecessors? Youthful vigor doesn’t seem like enough of an advantage.

Director Glen Winter (Smallville, The Flash, Arrow) went with a brighter and overall warmer aesthetic to the premiere. Colors popped and every scene, including the obligatory night fight scenes, were very well lit. That’s consistent with what should be an lighter tone for this series in general.

Brec Bassinger stars as Courtney Whitmore, a high school student forced to relocate to Blue Valley, Nebraska with her mother, Barbara (Amy Smart) and her stepfather, Pat (Luke Wilson) and stepbrother Mike (Trae Romano). Courtney doesn’t have much use for Pat, who if anything, is a little too eager to get Courtney to warm up to him. I worried this was going to be a tricky situation to navigate as Wilson comes off like an authentically nice guy and Bassinger is more of an unknown. The default would be to go with the likable guy you know instead of the moody teenager who won’t give the poor guy a break.

Johns brings a realistic slant to modern high school in a way that wouldn’t work in an comic book aspiring to reach a wide audience. The school, and cast in general, is commendably diverse (it doesn’t have to be that hard) with teases of some characters being more than they appear. Pro tip: don’t read cast listings as some of their identities are spoiled.

In a lot of ways, Stargirl felt like an Marvel Cinematic Universe film in that Courtney was excited and enthusiastic about her new abilities after discovering the Cosmic Staff. That’s a major departure from most of the Arrowverse/DC Universe shows where the heroes suit up more out of a sense of duty, obligation and self interests.

Robin and his crew were emotional wrecks in Titans when they got the band back together. Supergirl had powers and never used them until her sister was about to die in a plane crash. Being Black Lightning nearly cost Jefferson Pierce his family along with his marriage. Oliver Queen was on a revenge kick when he left the island (officially) and became The Hood/Arrow/Green Arrow. The Doom Patrol was content being on the sidelines until being dragged into action by Cyborg.

Courtney smiling as she used the Cosmic Staff and flew for the first time provided that sense of wonder and fun the CW/DCU and to another degree the current DC movie universe, with the exception of Shazam, lack. Being a hero and using cool powers should be fun not this big heavy burden with all of the crushing emotions and expectations that come with it. It was also refreshing to see Courtney just using her already established love of gymnastics as the reason she could be formidable even if she lacked any real control over the Staff.

I also appreciated the pacing as there wasn’t some extended secret of Courtney running around before Pat learned she was playing superhero. That comes out right away as well as Courtney’s thoughts that Starman (Joel McHale) might be her father. Pat realizing that Stripesy might not be the coolest alter ego was a nice touch too. Also, I’m really hoping we see some old school JSA flashbacks and some of Starman as the Star-Spangled Kid.

Courtney’s initial encounter with Brainwave (Christopher James Baker, Agents of SHIELD) goes about as well as a novice should fare against an experienced villain i.e. she got the fluky standoff win, but got beat up more than a lot of rookie heroes. This allows the hero to learn from her mistakes and get better as opposed to having it all down right away to the point she could take on an experienced wannabe Sith with no training. Whooops, sorry mixing my franchises again.

The ending with Pat coming out in his STRIPE armor was a great payoff. Normally, I’m OK with slower pacing, but this helped show Pat isn’t a goof and handle himself in a fight.

I came away liking this a lot more than I expected. There’s a lot of potential here and it should prove to be a quick standout among the DC shows airing on the CW.