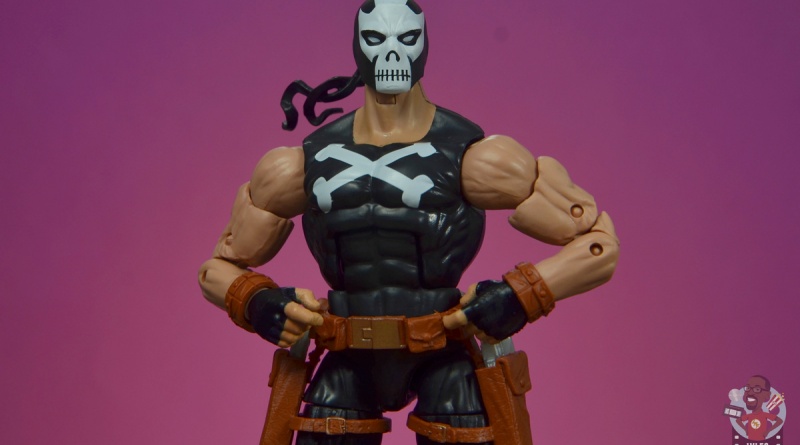 The Black Widow wave has been kind of fun in how it’s played out a lot like the Black Panther wave with a mix of comic book characters not completely associated with the main character. Crossbones is another great example as he’s definitely more of a Captain America foe than a Black Widow adversary. Honestly, I’ve stopped worrying where figures come out so long as we’re getting our steady onslaught of new releases… or dramatically improved upgrades. Let’s check these bones.

Packaging: Black Widow’s wave gets the standard Marvel Legends packaging with a black and red color scheme. That’s fine, but I’m a big fan of the Steranko inspired side with the Marvel logos on the white background against the sharp colors for the character. 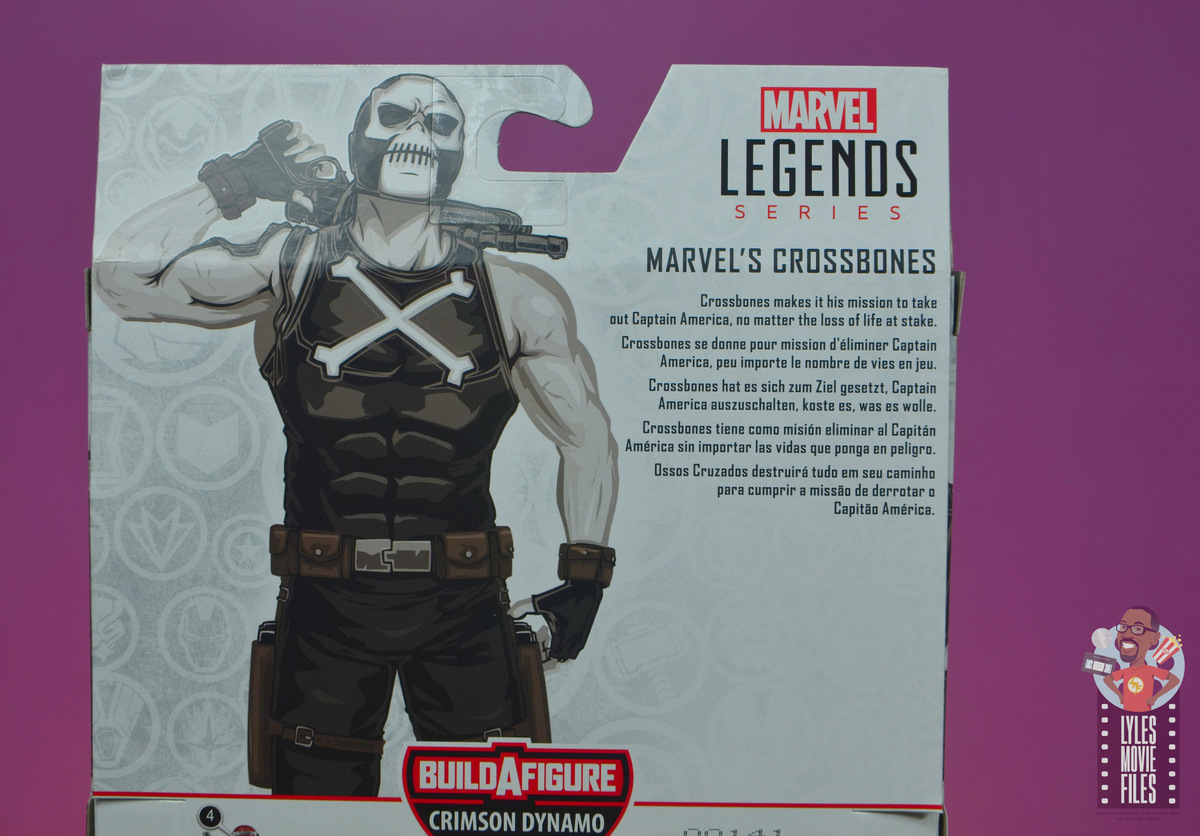 While it’s not always my preference, I like the more cartoonish art style for the character and the bio explains his character fully.

Likeness: Crossbones is a towering brute. I think he’s using a new buck and looks like a truck. His head might sit a bit too high, giving him a little pinhead appearance. I like Crossbones’ width as he looks like someone who would give Captain America trouble. 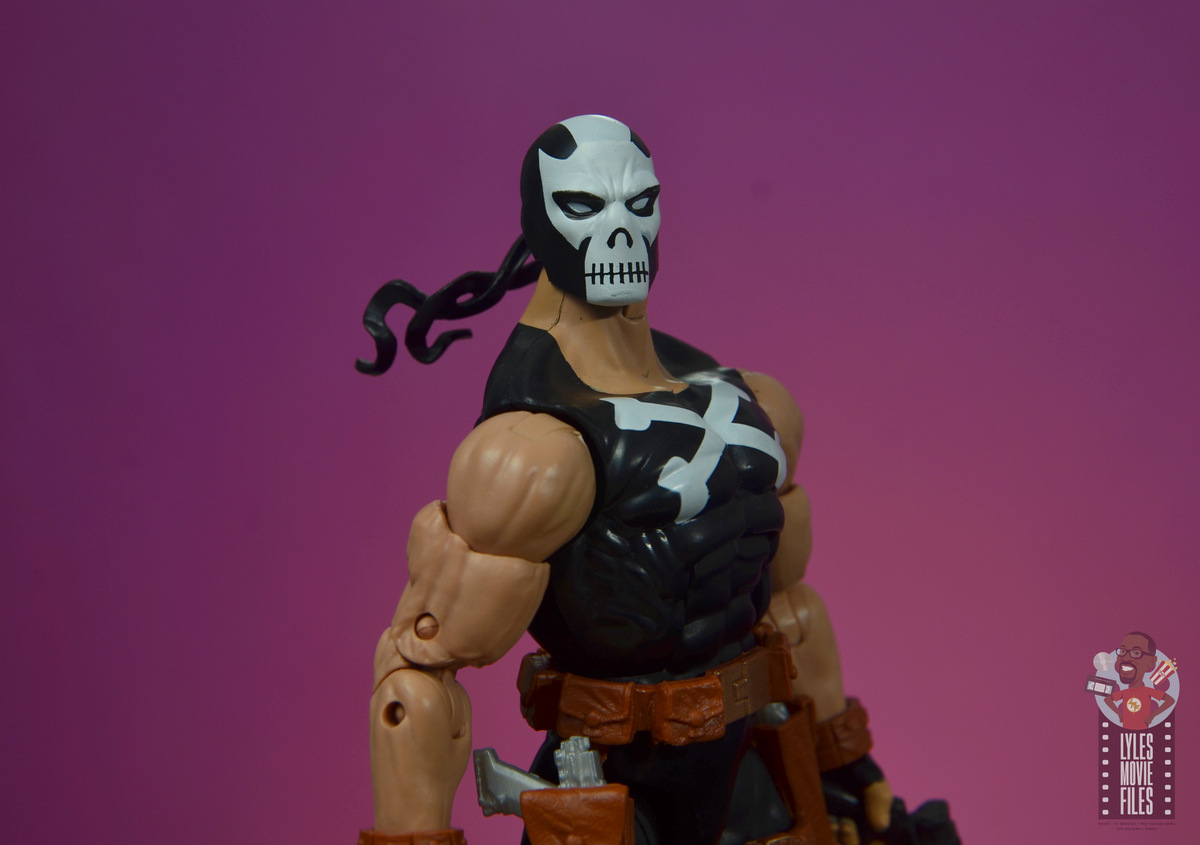 Of course it’d be nice if the tank top was sculpted. Hasbro’s previous comic book Crossbones had a sculpted mask, which looked nice and intimidating making for a better looking head sculpt. It’s much smaller though so you won’t be able to swap it without making Crossbones look ridiculous. I do like the flowing ties of the mask, which the first figure lacked. 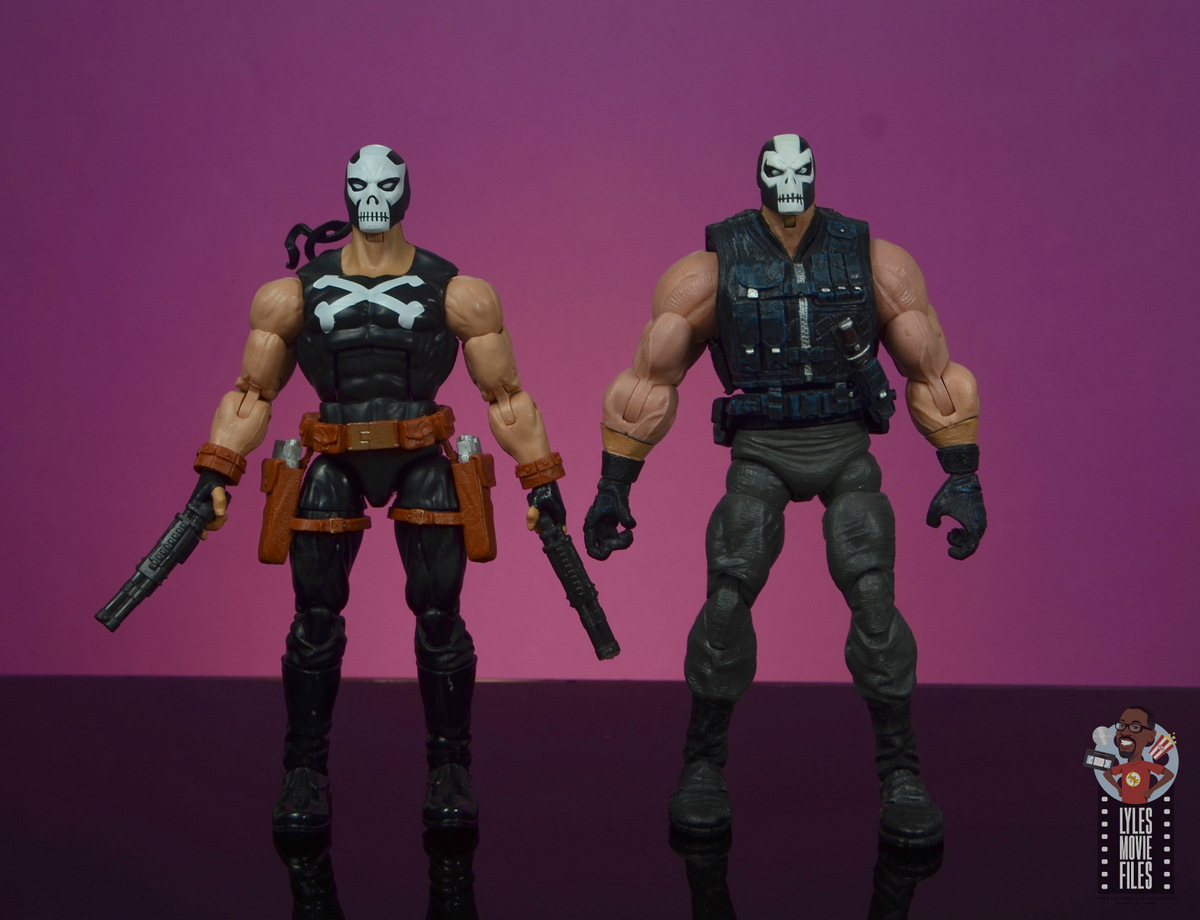 He’s pouched out with a belt with matching holsters on either thigh. The pouches carry over to the wrist as well.

Paint:  Crossbones doesn’t have a flashy outfit. It’s all about the crossed bones and the skull mask. The eyes are painted in a way that don’t convey the same level of creepiness, but does offer a blank void that’s also eerie.

I think the bones probably should be positioned lower, but that would start to clash with the torso joint so that makes sense. There are no issues with the white on the black as the paint is clean and lacks the bleed through we tend to see with yellows and whites. The pouches could use a wash to dirty them up a bit. 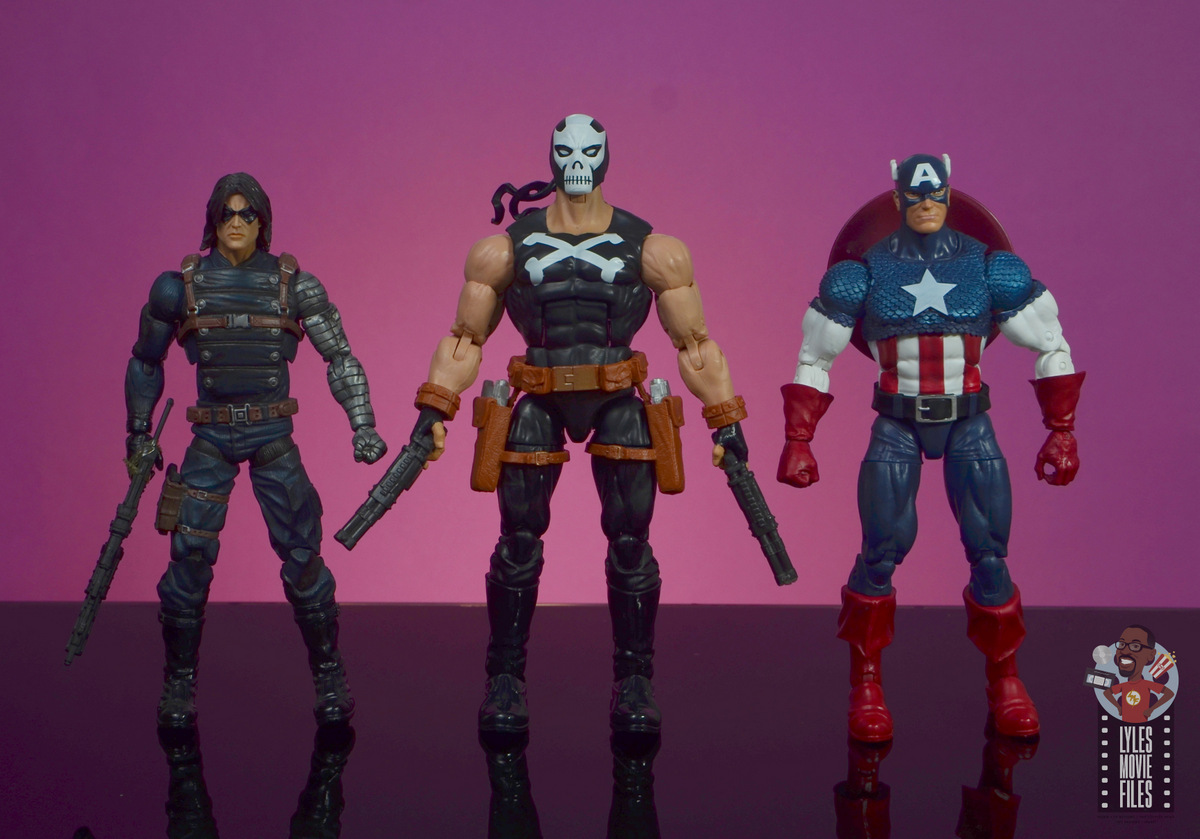 Scale:  Crossbones is huge even taller than Marvel 80th Captain America figure. That’s right as the character is typically portrayed as a walking condominium. 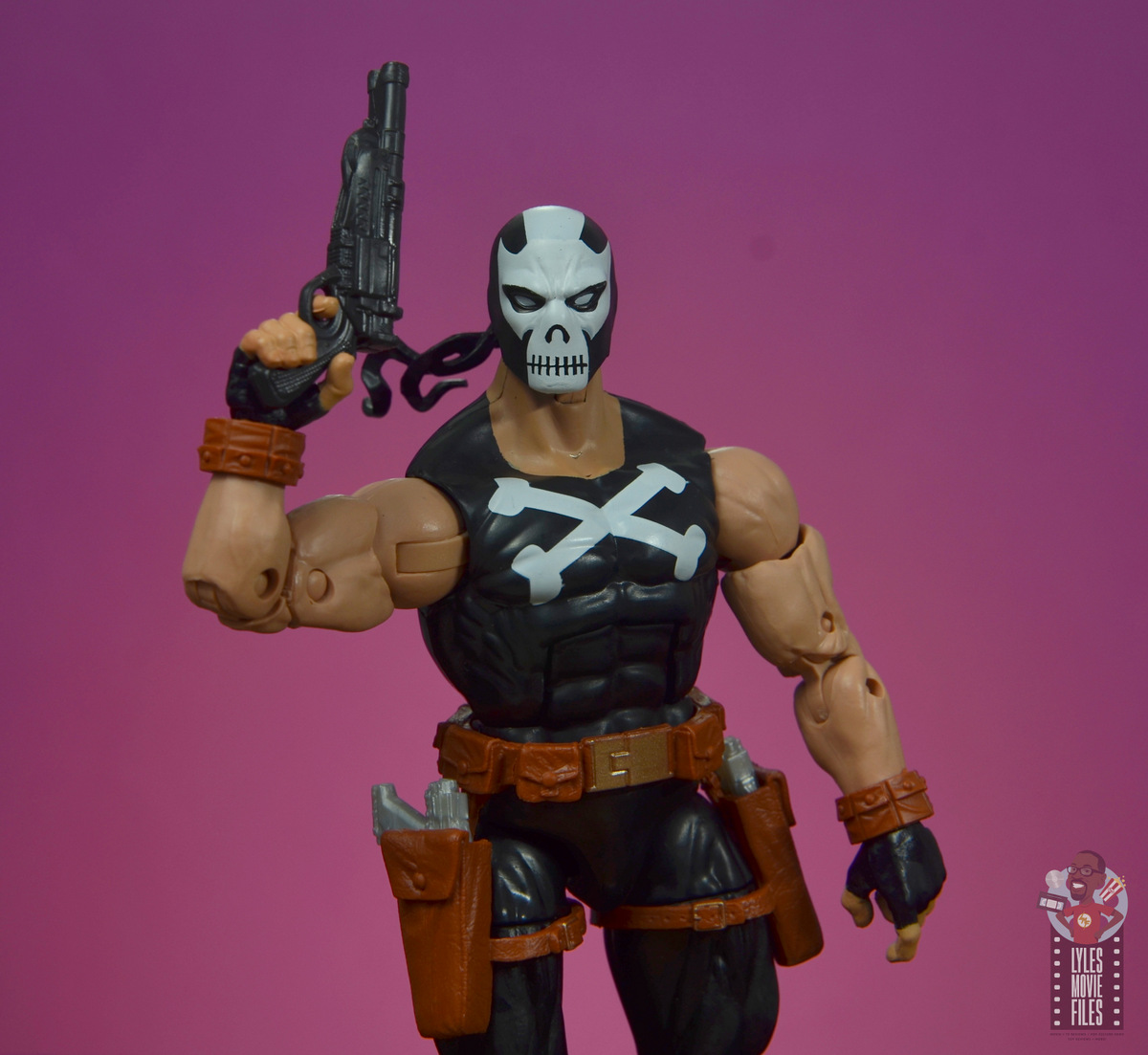 Articulation: Crossbones needs to be able to get some good aiming poses, which is why the trigger hands are useful. Not so much for punching out Cap, but he’s able to get some dynamic poses. 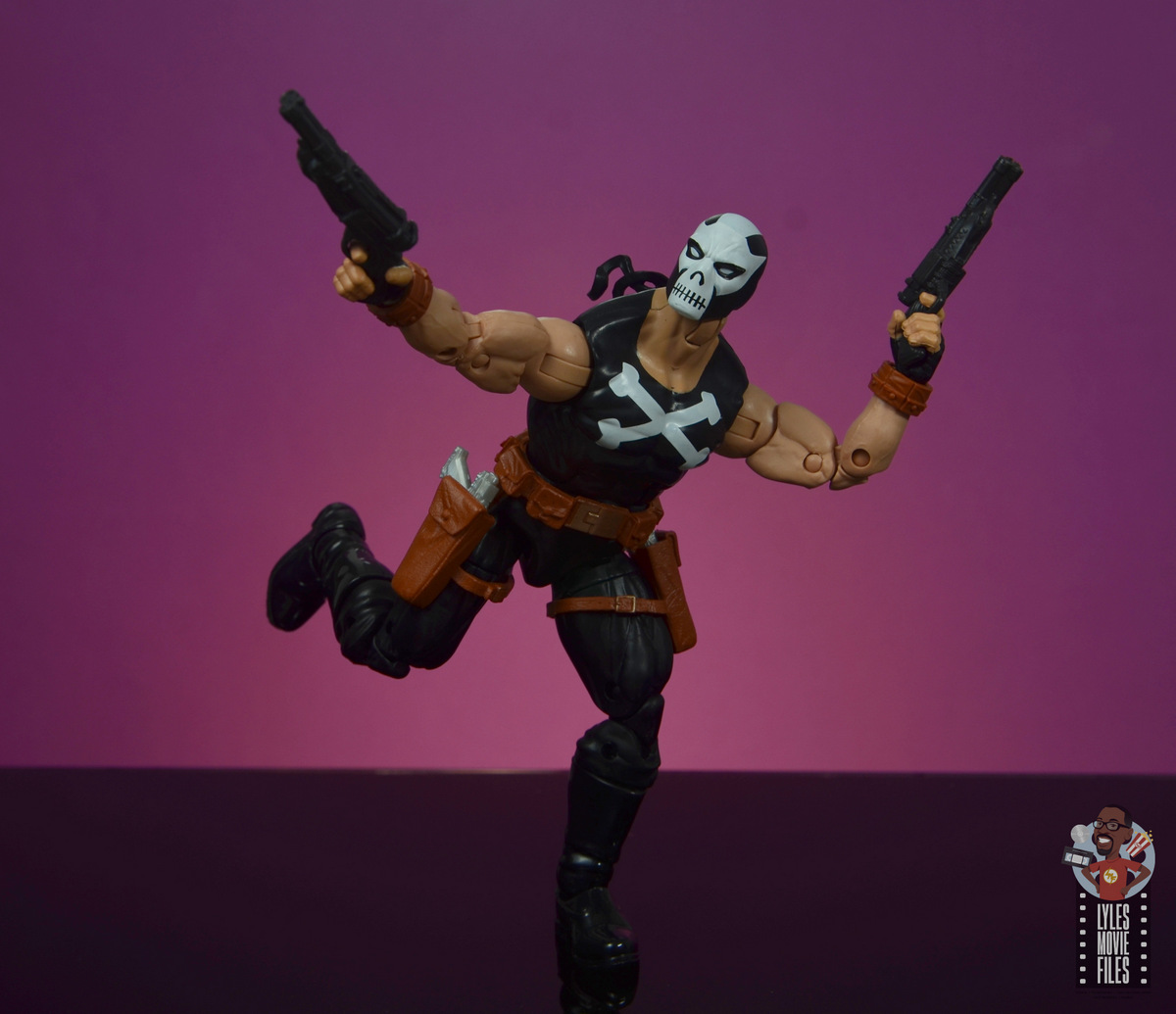 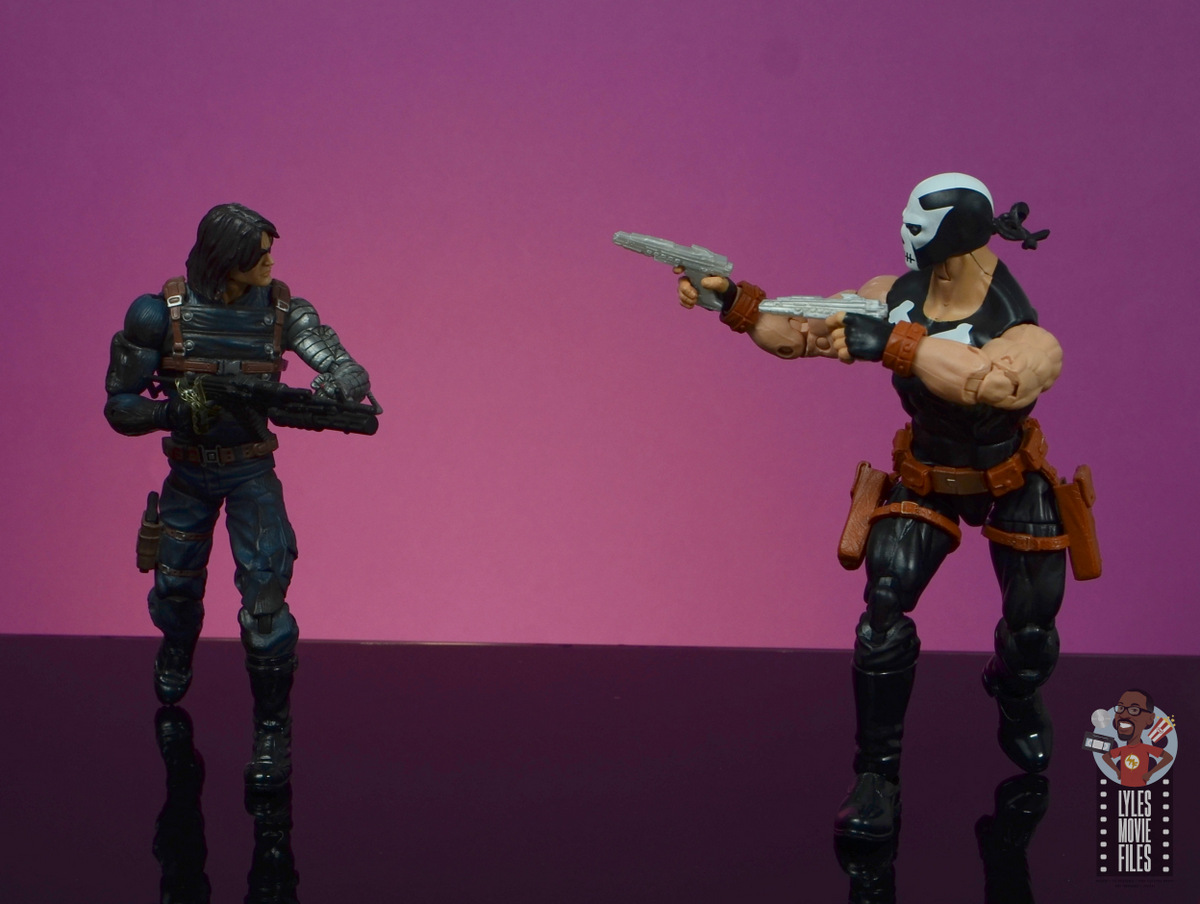 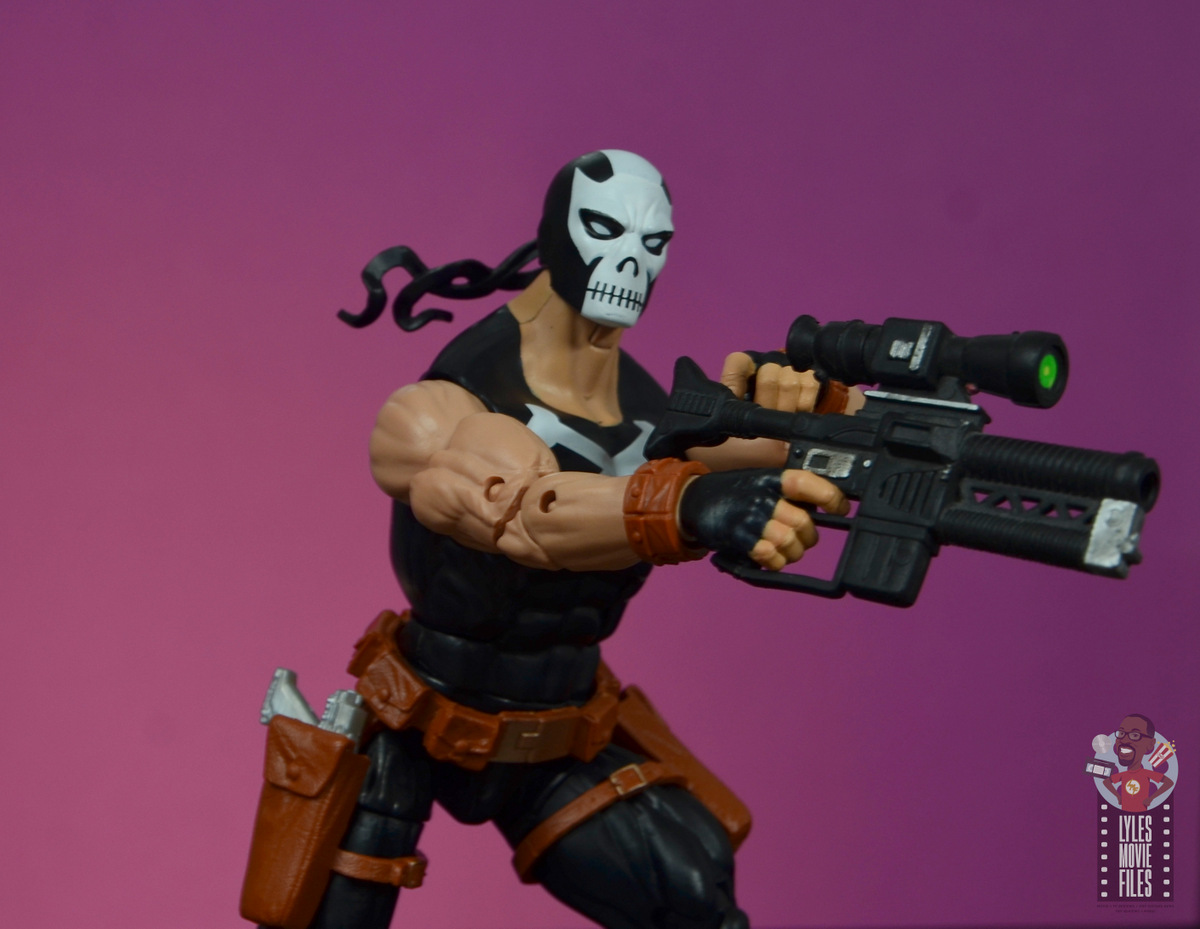 Accessories:  Crossbones is loaded with a solid arsenal. He comes with a pair of silver blasters and larger mini-cannon style revolvers. He can also easily hold the larger gun from the earlier Crossbones. 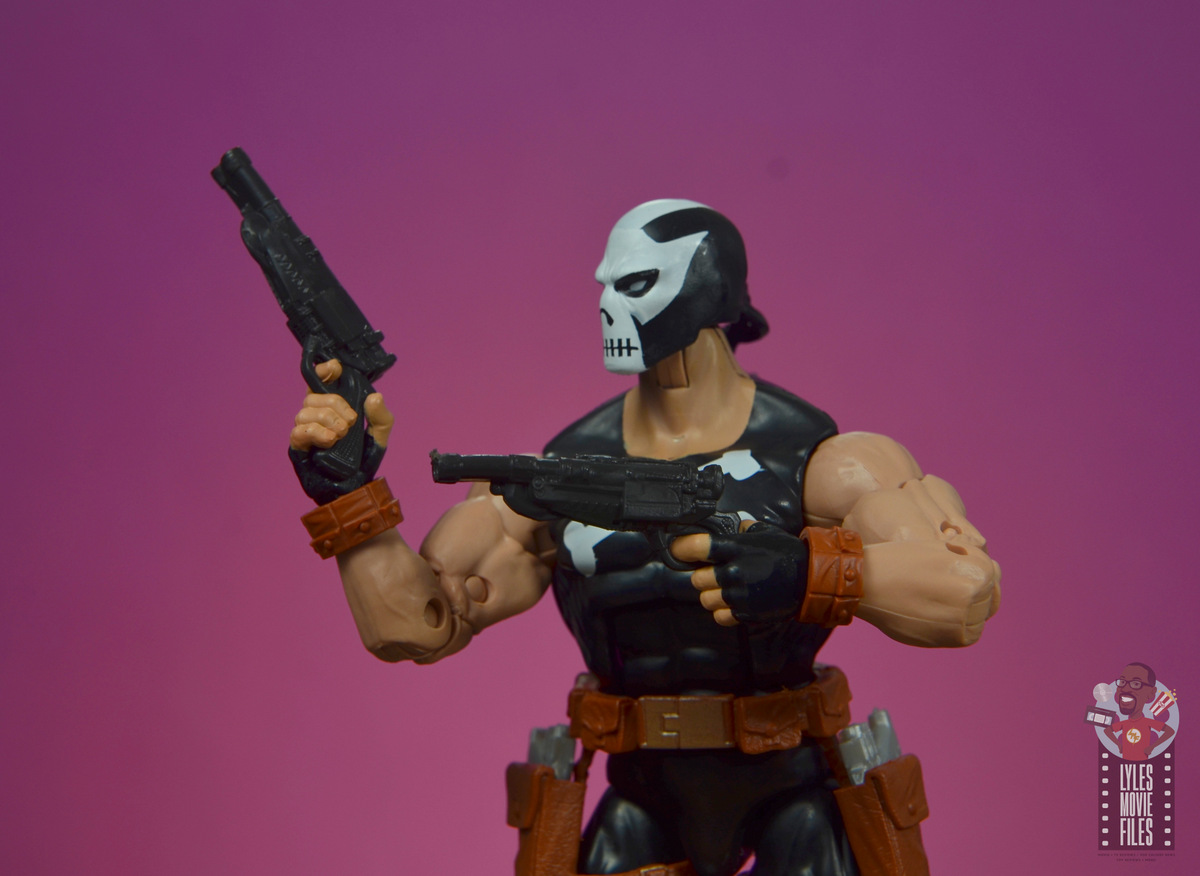 The silver blasters fit into his holsters. 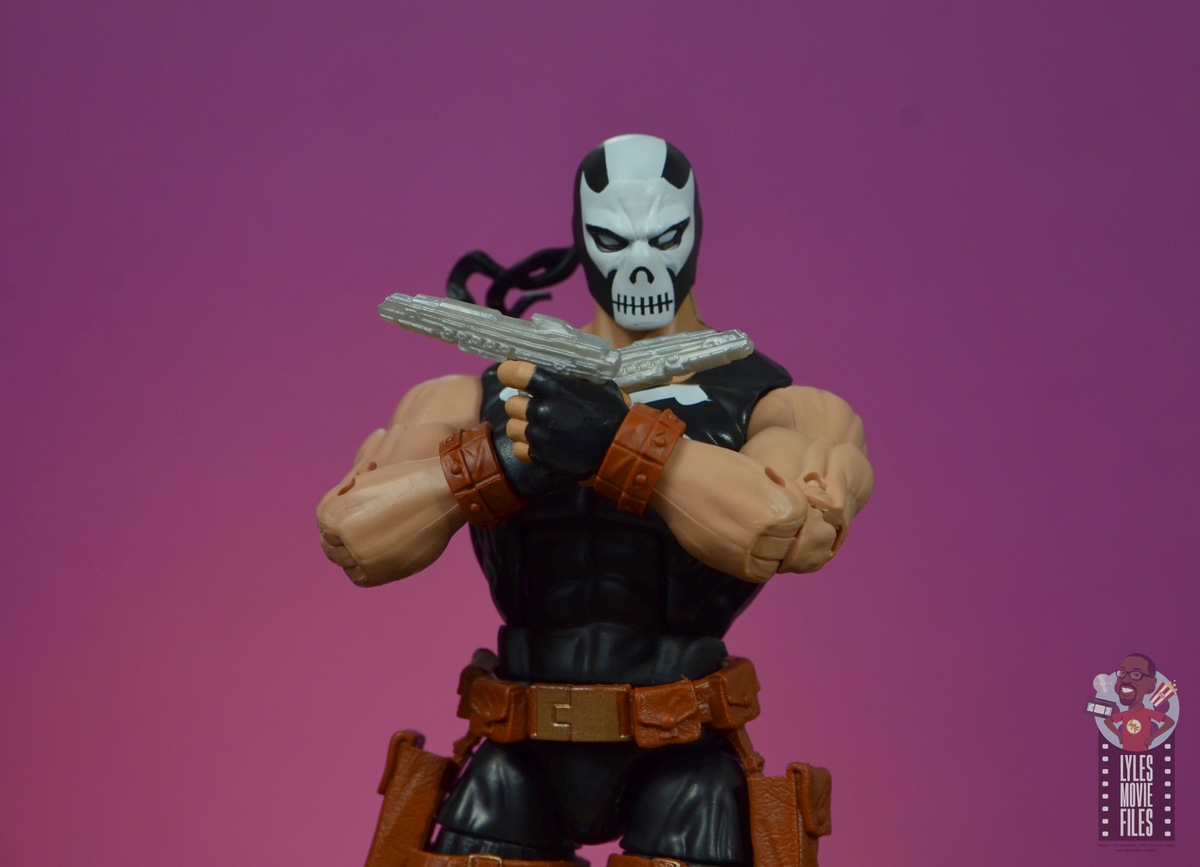 Additionally, he comes with the right arm of the Build-A-Figure Crimson Dynamo. 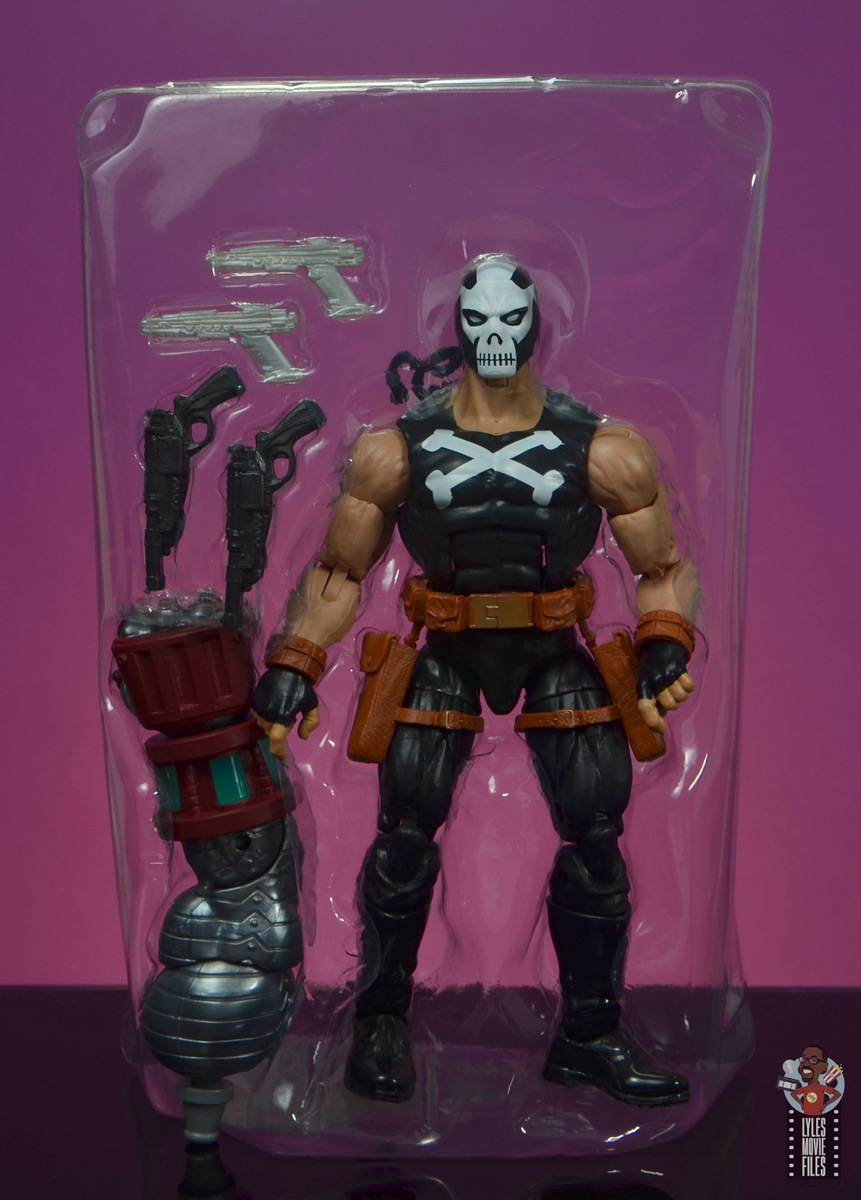 Worth it?  I got Crossbones for $20. Along with The Winter Soldier, he’s one of the more in demand figures from this wave so don’t wait too long in grabbing him.

Where to get it?  Crossbones has been a regular on Amazon, Hasbro Pulse and (theoretically) at stores like Target and Wal-Mart now…if your area stores have worried about stocking figures these days. 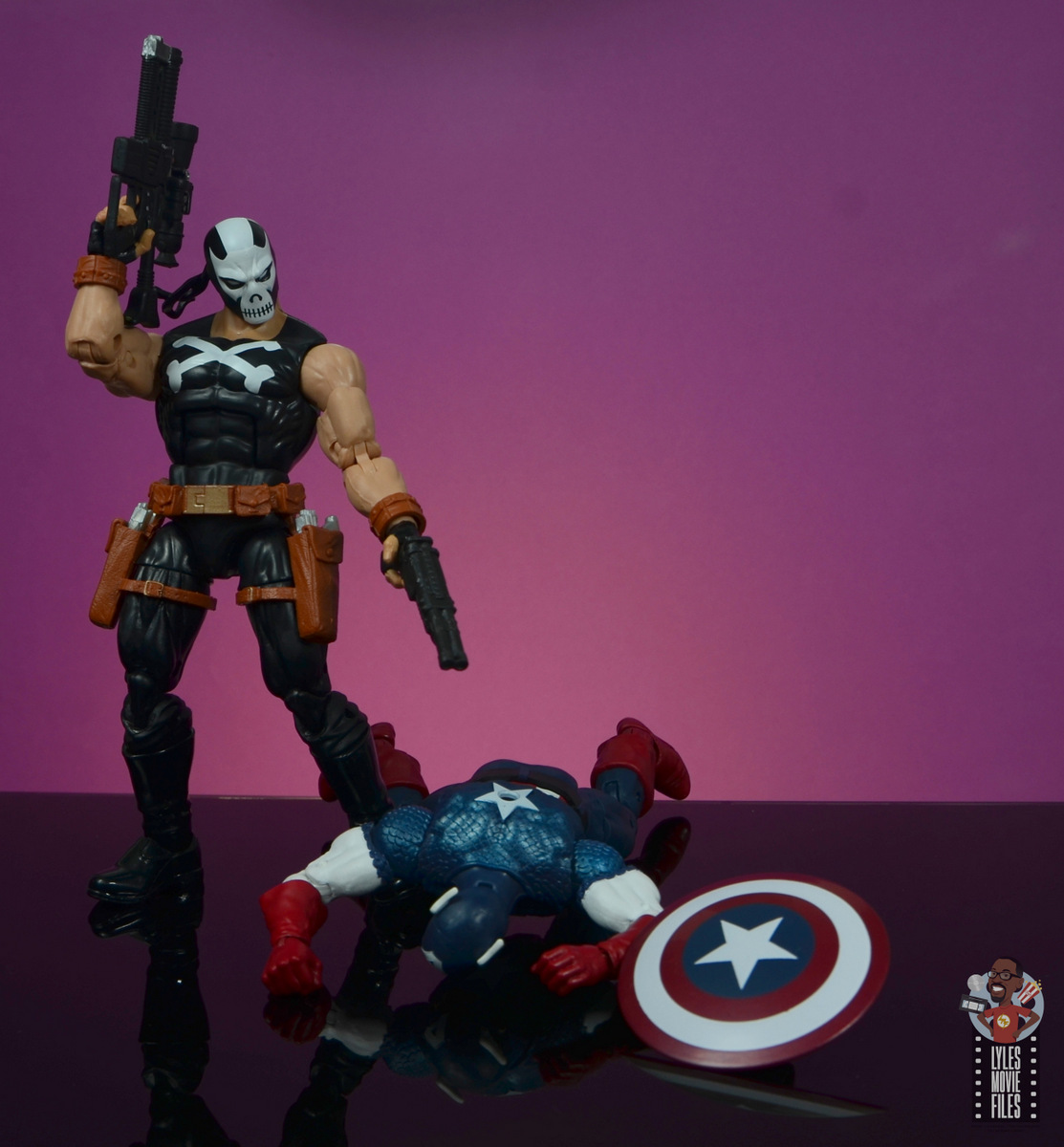 To avoid any funny stuff you might be better off just going the online route at Amazon, Target or Entertainment Earth.