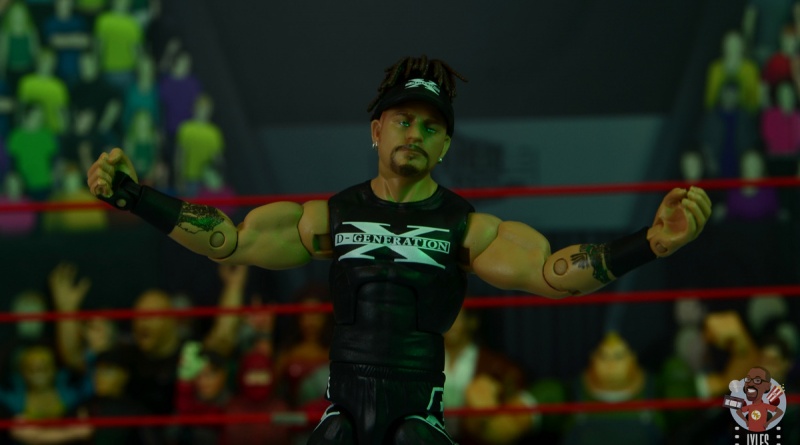 Road Dogg Jesse James was one of my favorite B-level stars during the Attitude Era. He blew up at the ideal time when his charisma and personality could make up for his lack of superior wrestling skills. And as one half of The New Age Outlaws, he’s a regular in the annual March Bashness tournament. I’ve been long overdue in reviewing this Hall of Champions exclusive figure from Target. Let’s see if I need to calllllll somebodddy about this one.

Packaging:  I love the presentation of the Hall of Champions wave. Blue and gold with a touch of red and white. The package insert with the belts is really classy.

Mattel reused the picture for the side and rear package, but it captures Road Dogg’s fiery personality. The bio is fun and does a nice job summarizing his career and relevance in this line. 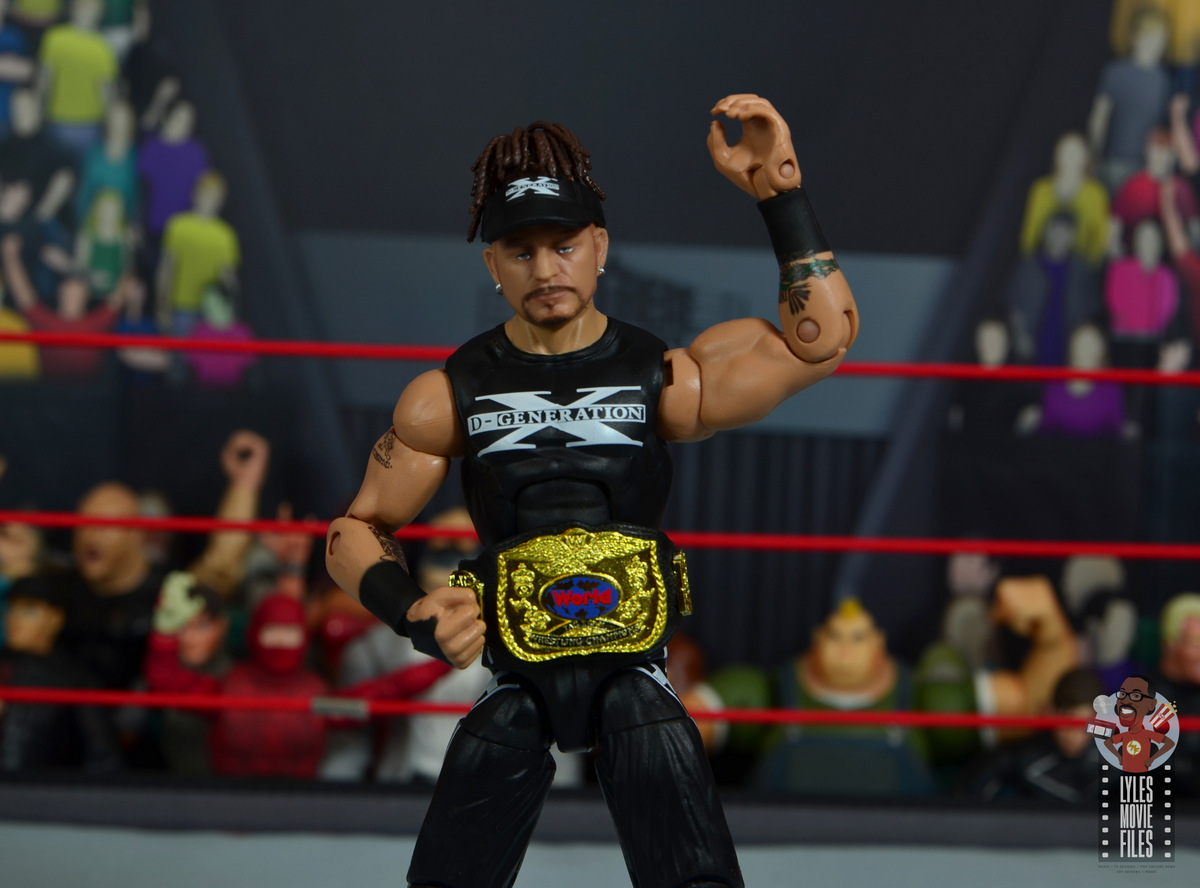 Likeness:  The first Elite Road Dogg has a great headsculpt and nice baggy pants. It just suffered from one major problem — the awful, oversized plastic T-shirt. 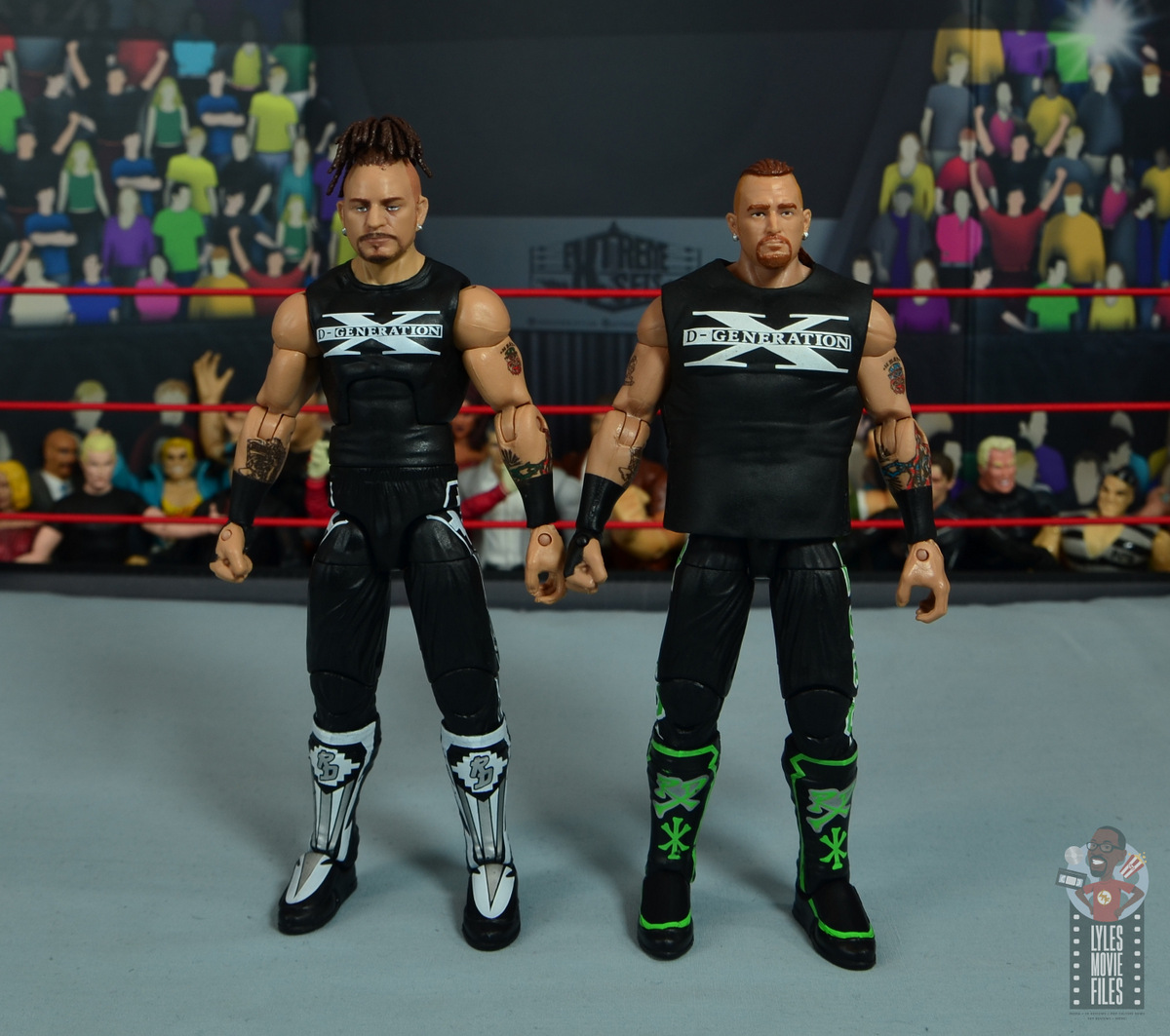 With this new figure, Mattel decided not to make a separate shirt and just went with a molded one. That was probably my second option as a cloth shirt seemed like the better choice. The issue with the molded shirt is the torso and waist is a bit slight. Road Dogg wasn’t fat, but he also wasn’t going to be confused with a cruiserweight. 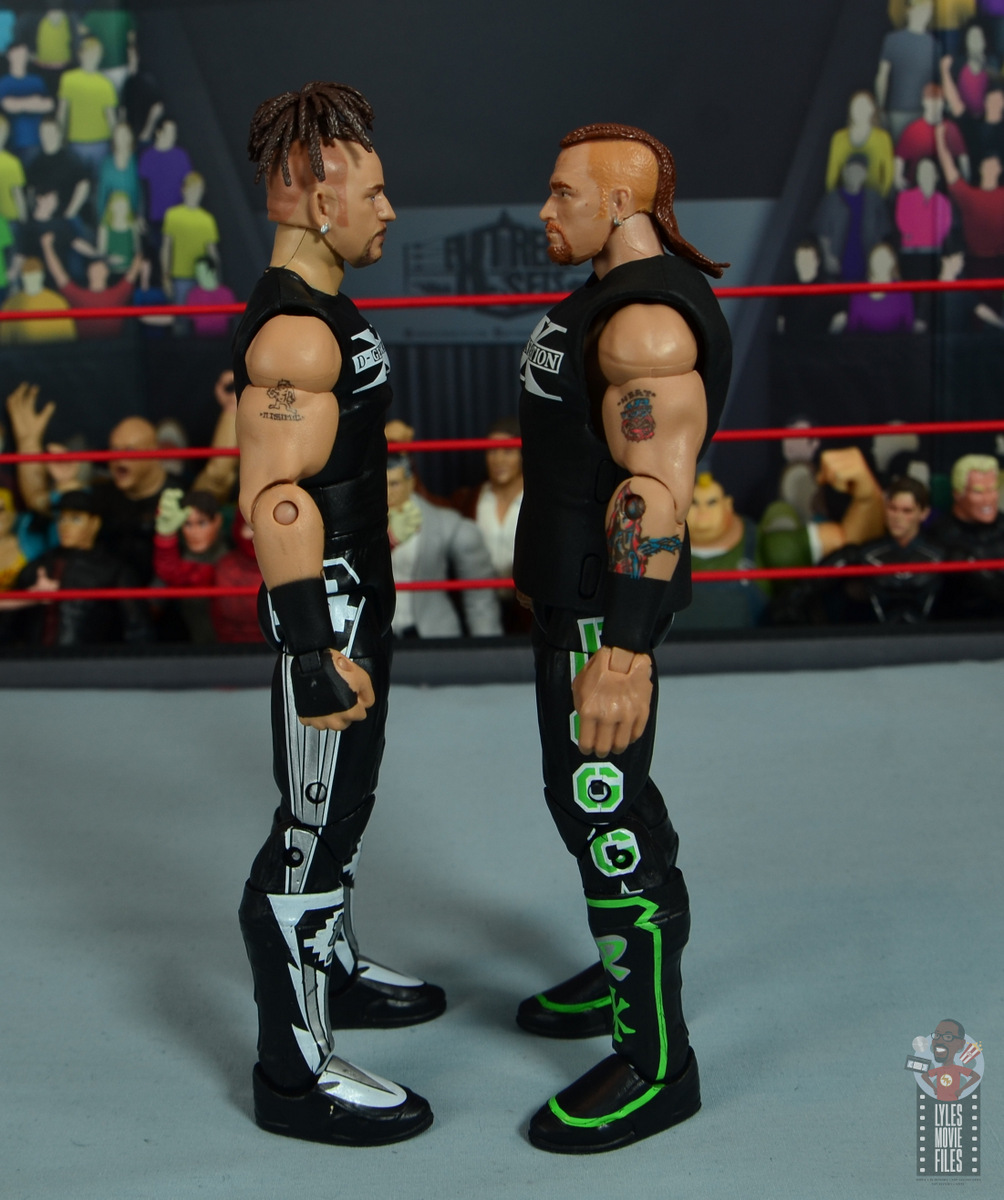 I really like this head sculpt. Like the first Elite one, it’s more of a serious expression, but it works. I appreciate the different hairstyle with the vertical waterfall positioning of the hair. I’m pretty sure the pants are a reuse of the original Elite figure, which had nice baggy legs and kickpad boots. 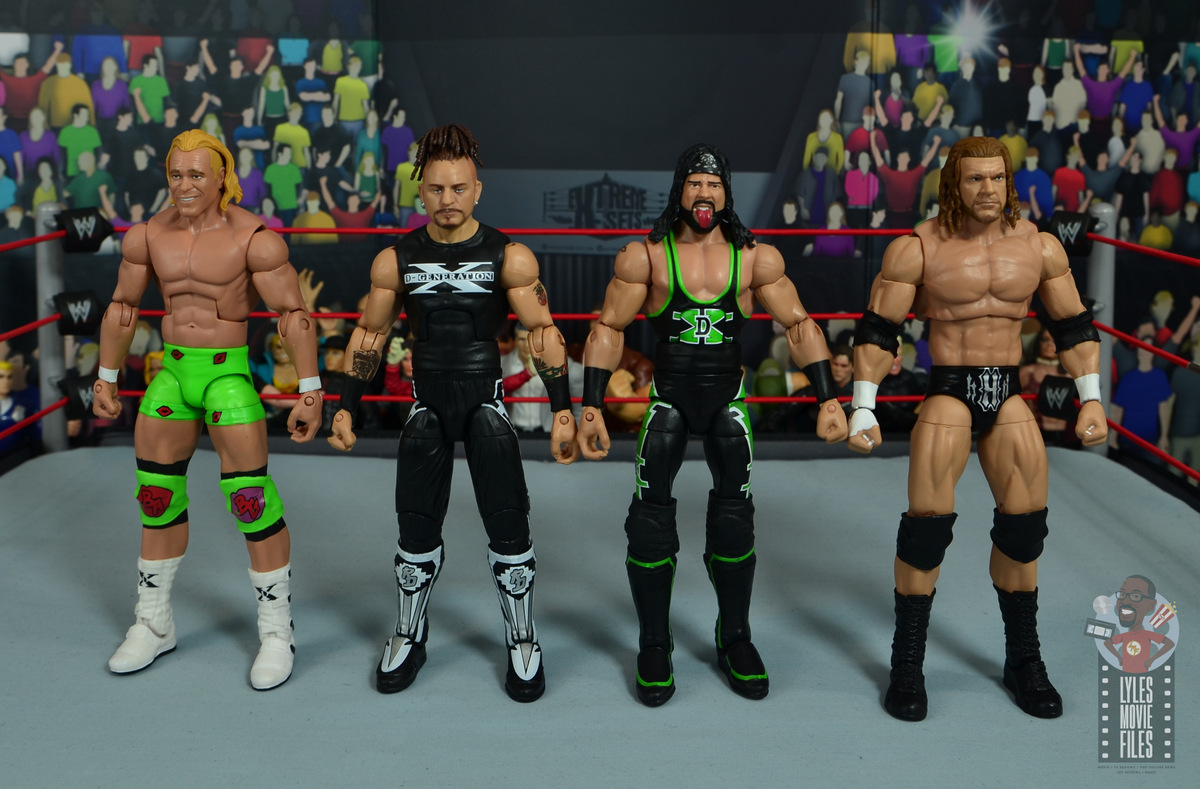 Scale:  Road Dogg stood at 6’1” the same height as X-Pac, shorter than the 6’3” Billy Gunn and 6’4” Triple H. Barring the raised hair, his height is correct. 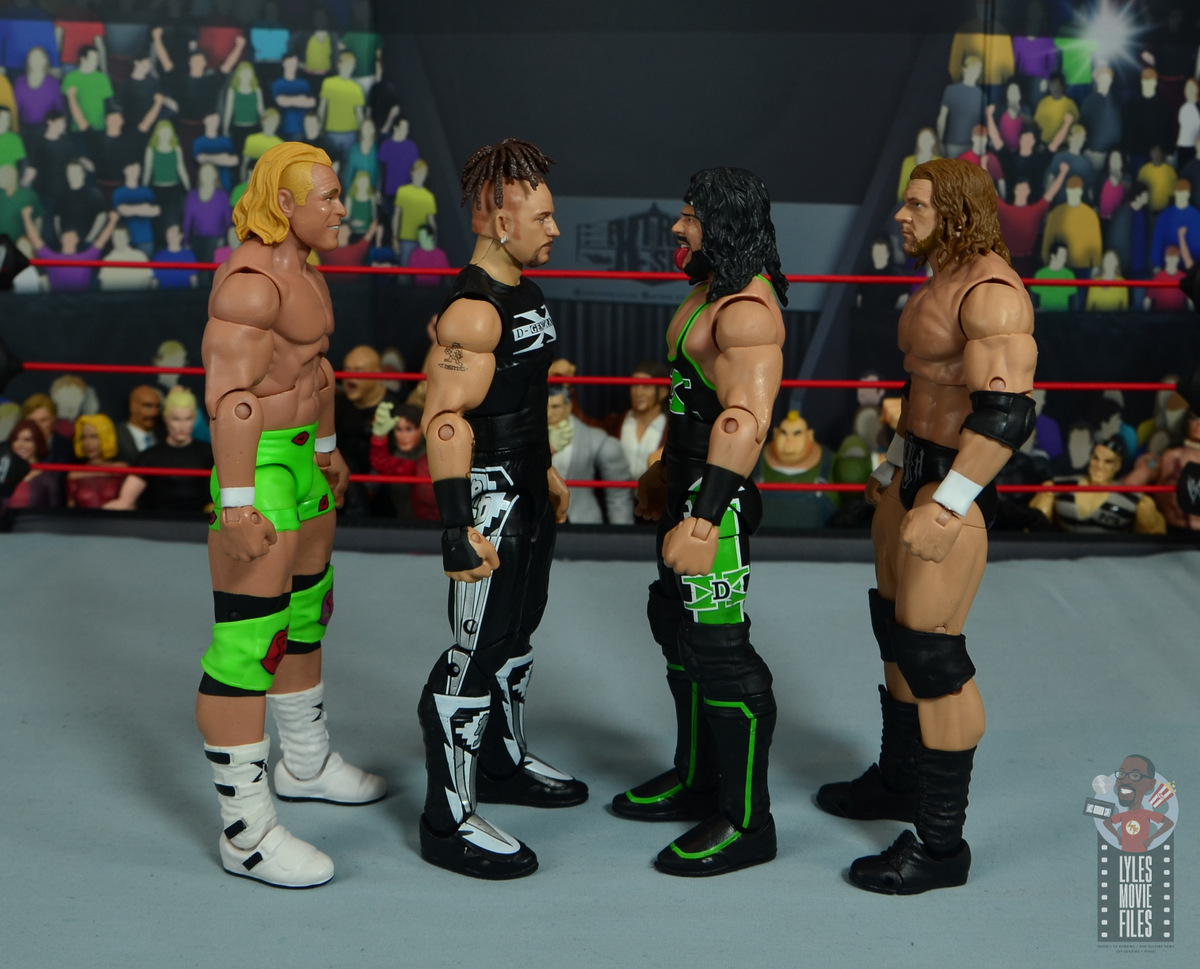 Paint:  Mattel never has a problem with the major tampos like the D-Generation X logo on the shirt. The boot design is mostly clean although mine could have benefited from another touch of white paint along the boot tops. As usual, the tattoo work is very clean. 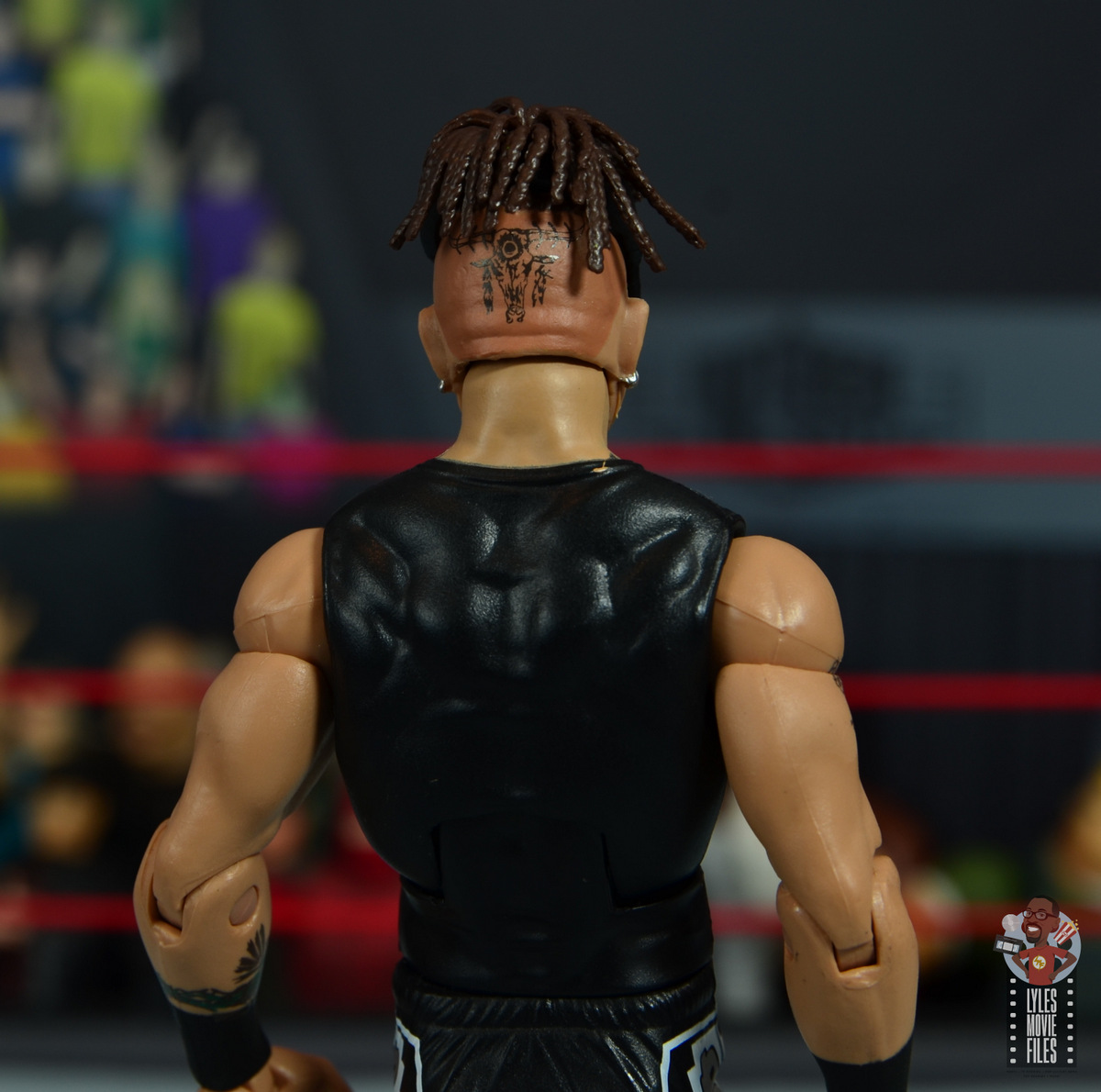 Articulation:  Road Dogg benefits from not having that goofy oversized life jacket masquerading as a shirt. This makes it a lot easier to pull off Road Dogg’s “intricate” move set of punches and kicks without having to worry about the shirt unbuttoning all the time. 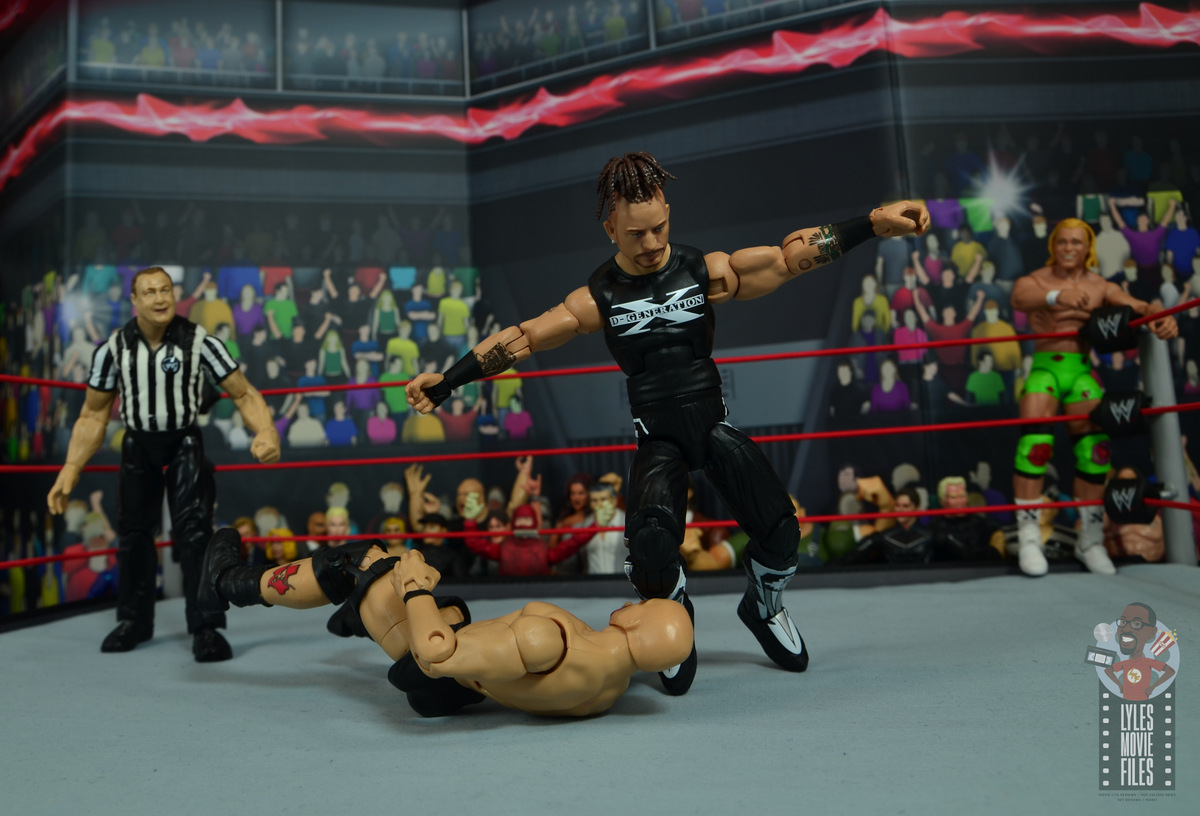 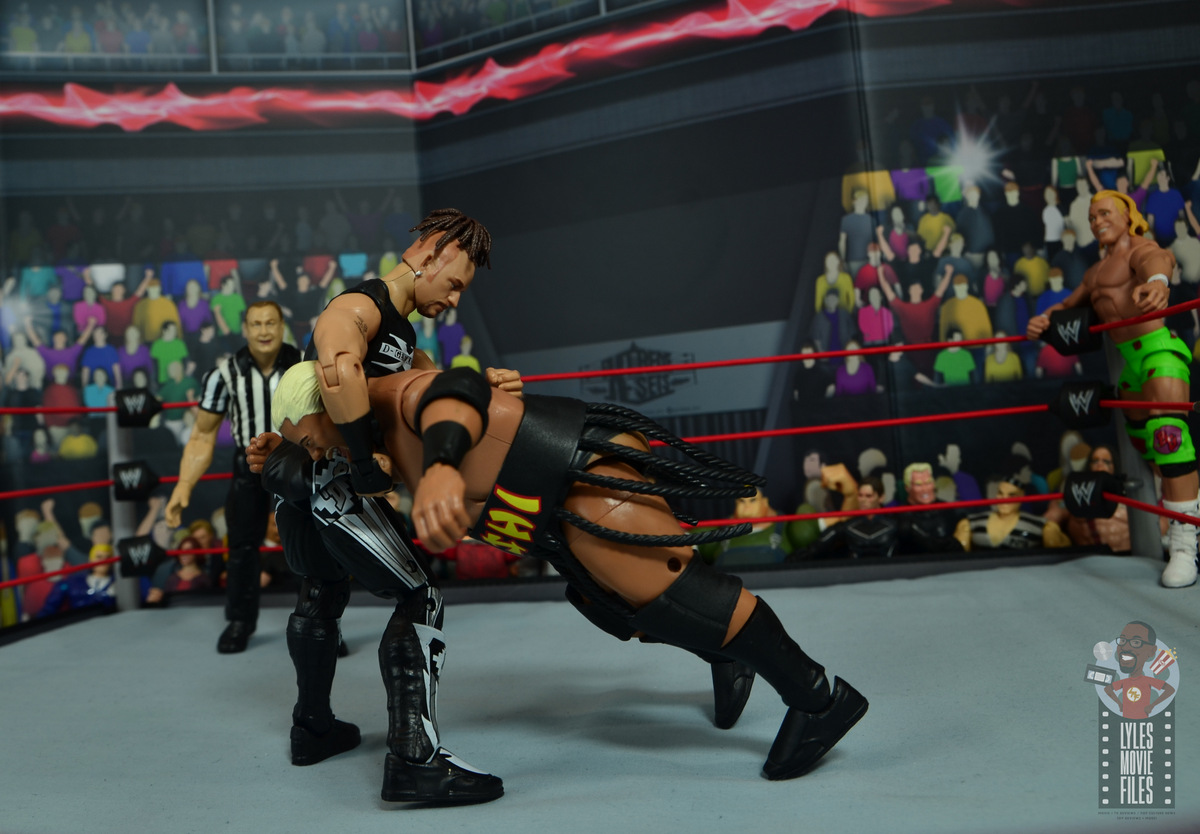 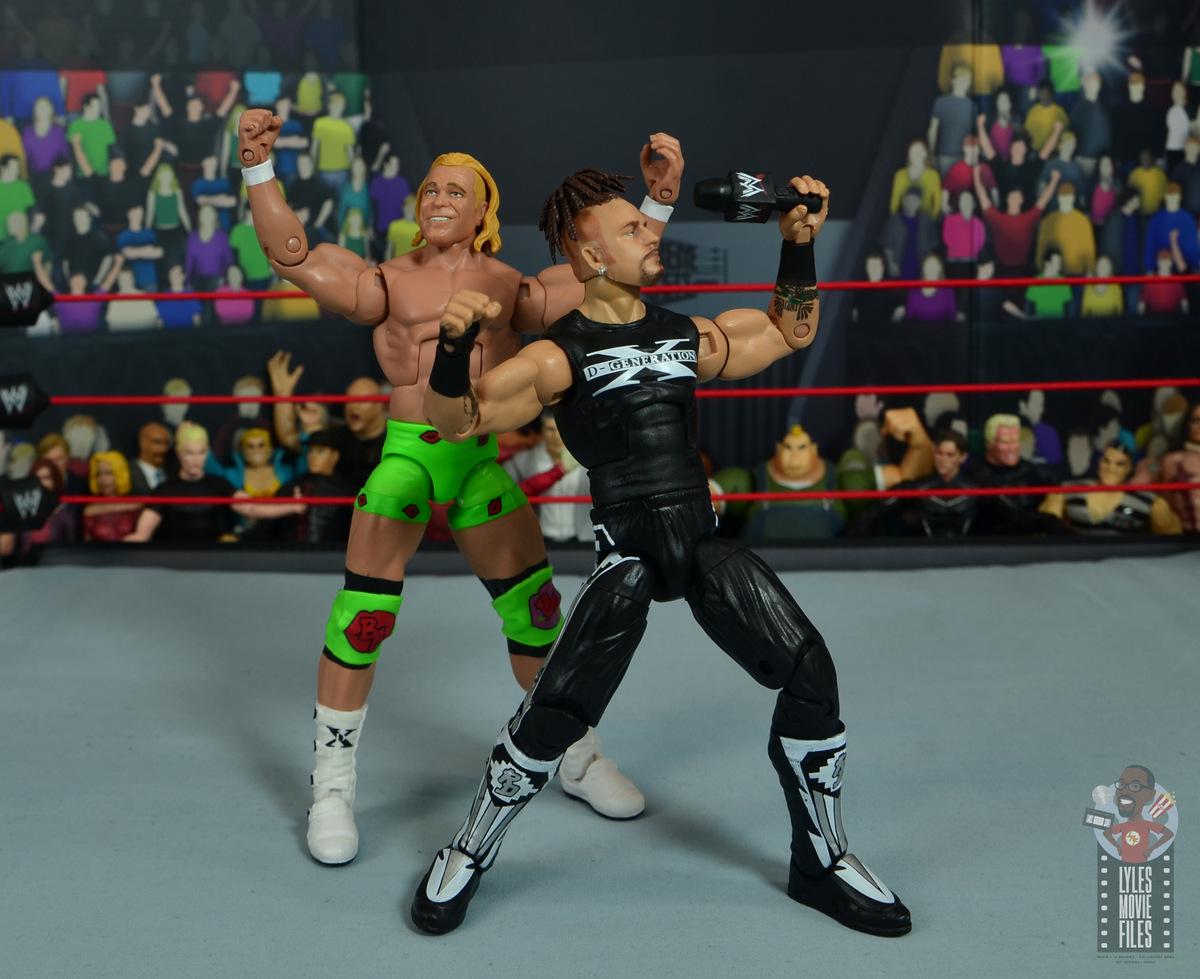 Accessories:  In keeping with the Hall of Champions motif, Road Dogg comes with the WWF tag team championship. Everyone’s probably got a ton of these at this point. I wouldn’t have minded if Mattel gave him the hardcore title to mix it up a bit.

He also has a brim hat to best accommodate his hairstyle, which fits easily over the softer hair. It’s a smart second accessory that makes sense for Road Dogg. Of course, I’m of the mindset that Mattel can’t go wrong adding alternate head sculpts. 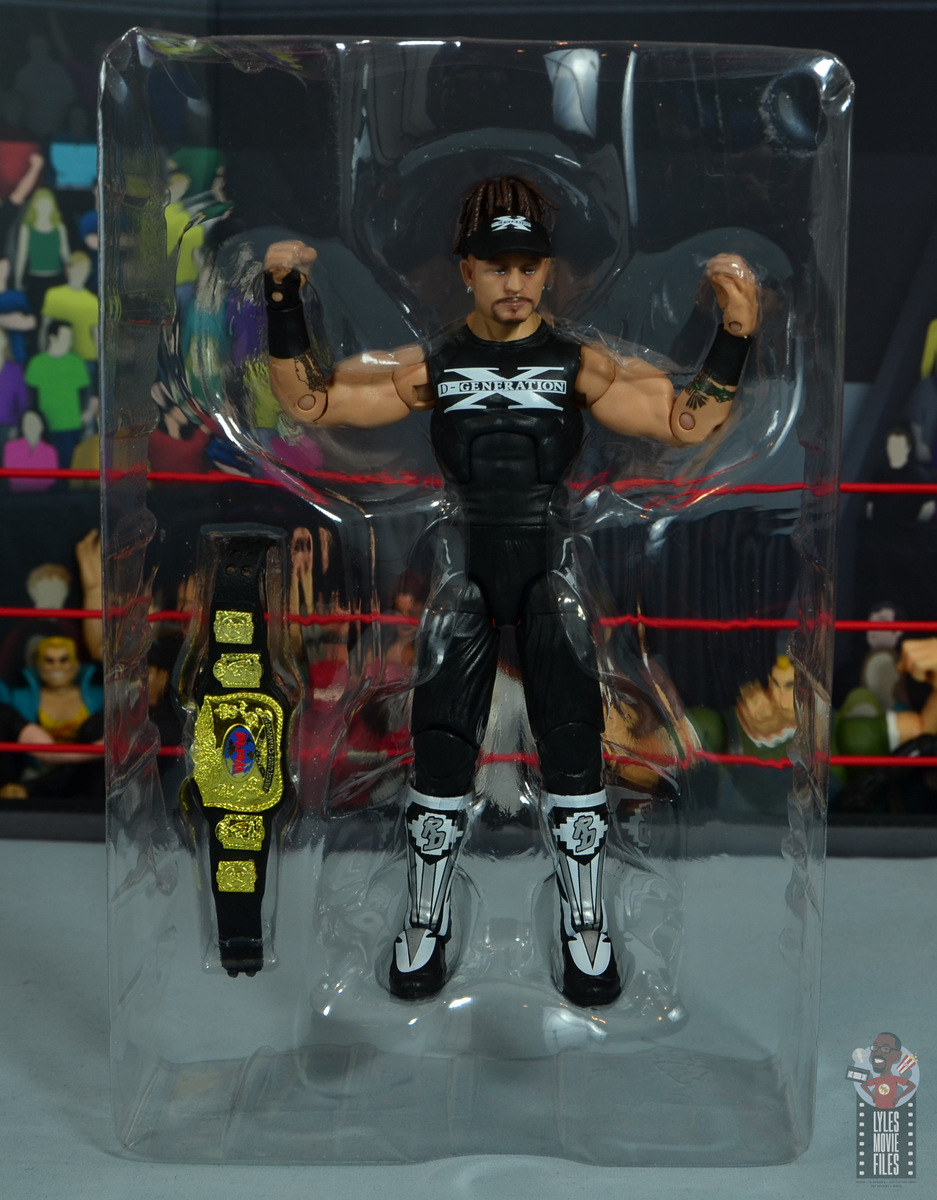 Worth it?  I got Road Dogg for $20. He seems a little slight for that price compared to some other figures that have more accessories including alternate heads. That’s not outrageous, but I wish he had a little more.

Besides his slimmer waist and torso, this Hall of Champions version is a big improvement over the early Elite Road Dogg. This makes for a better DX version and now you can use the second shirt for solo Road Dogg with the first version. 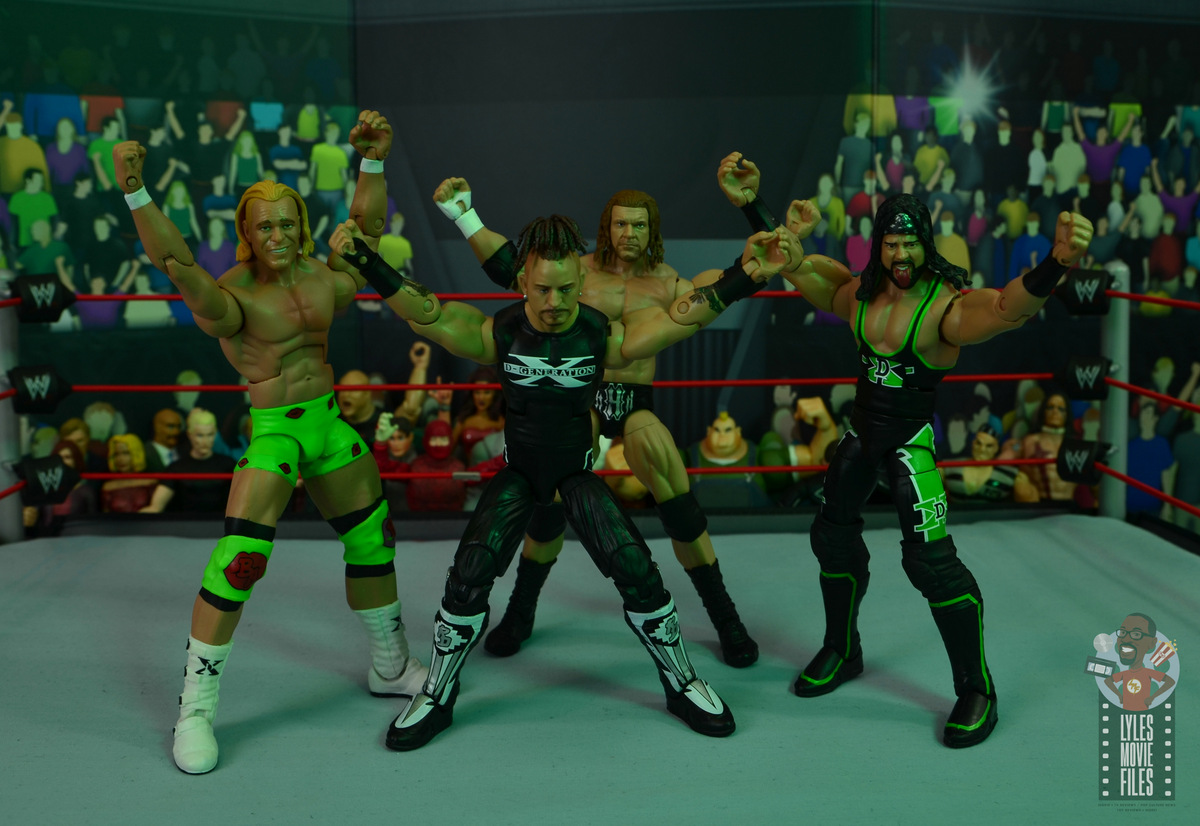 Where to get it?  eBay is not going to be your friend here, but it’s the only way to get this super limited Target exclusive although if you prefer you can get it from Amazon.