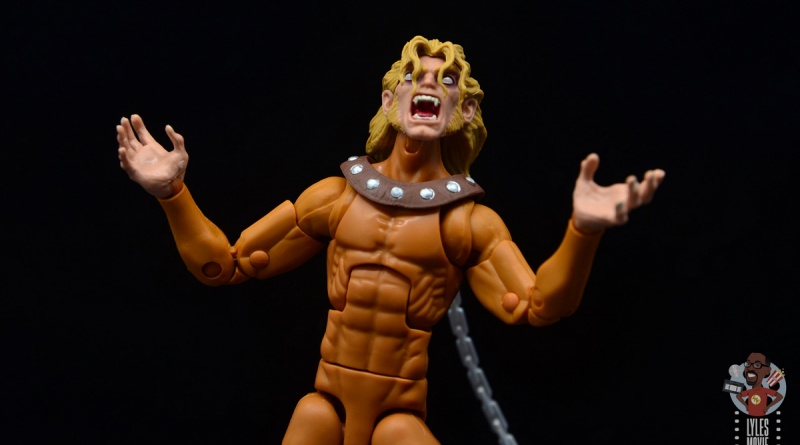 Age of Apocalypse is one of my favorite alternate realities stories. I loved the take on the X-Men and their enemies as well as the largely amazing redesigns. Today I’m looking at Wild Child.

Packaging:  This is an X-Men wave, but from a unique event so we get the standard gold accent color, but a blue insert with an image of Apocalypse. That’s a nice touch. The ominous Apocalypse head carries over to the side package making for a unique element for this wave. 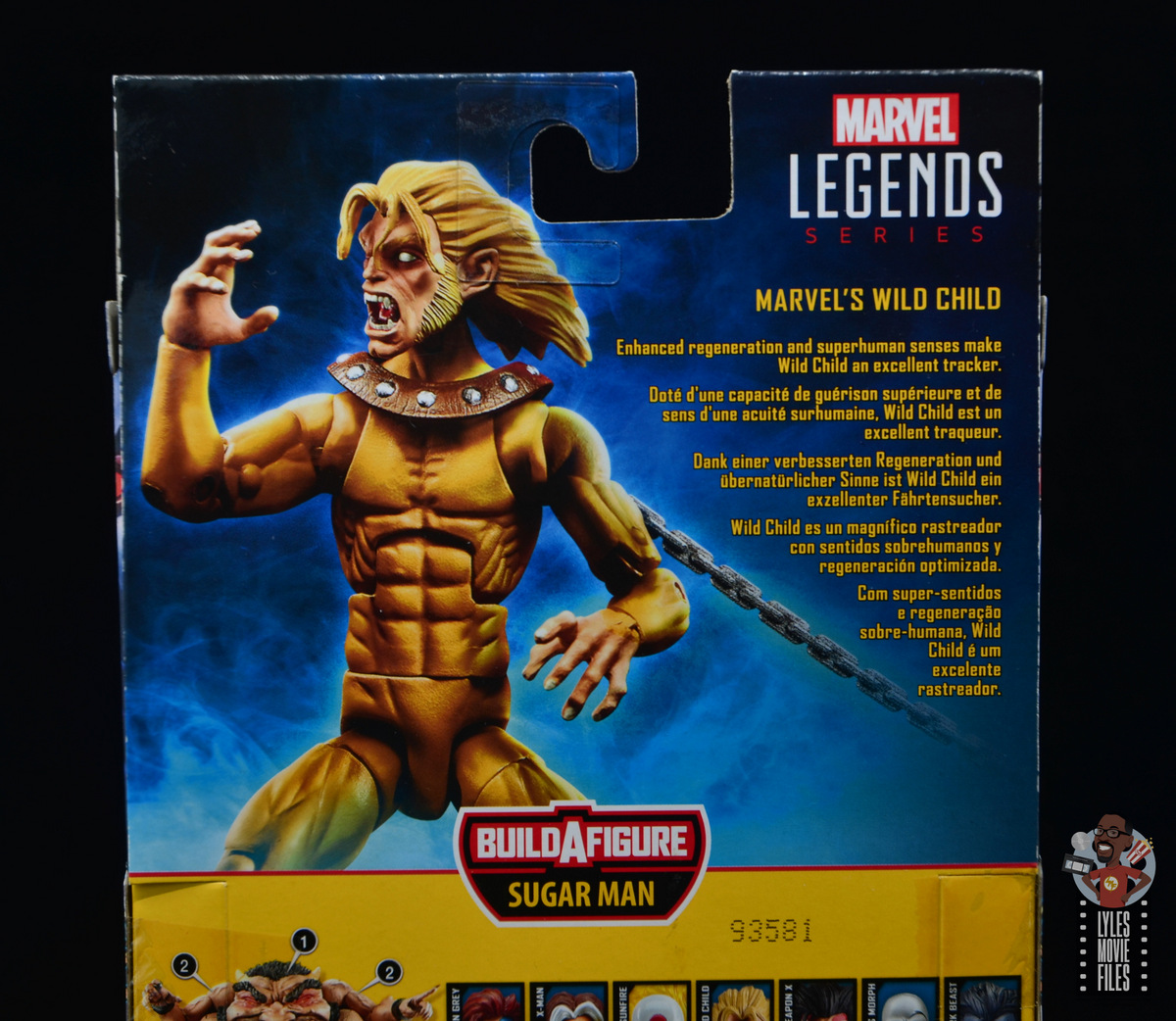 Marvel Legends have started to go a more cartoonish art style for the packaging. Unlike some other recent waves, this one features the figure on the back instead of artwork on the back. The write-up is an overly simplified take on the history of the character, but the bio can only be but so long. 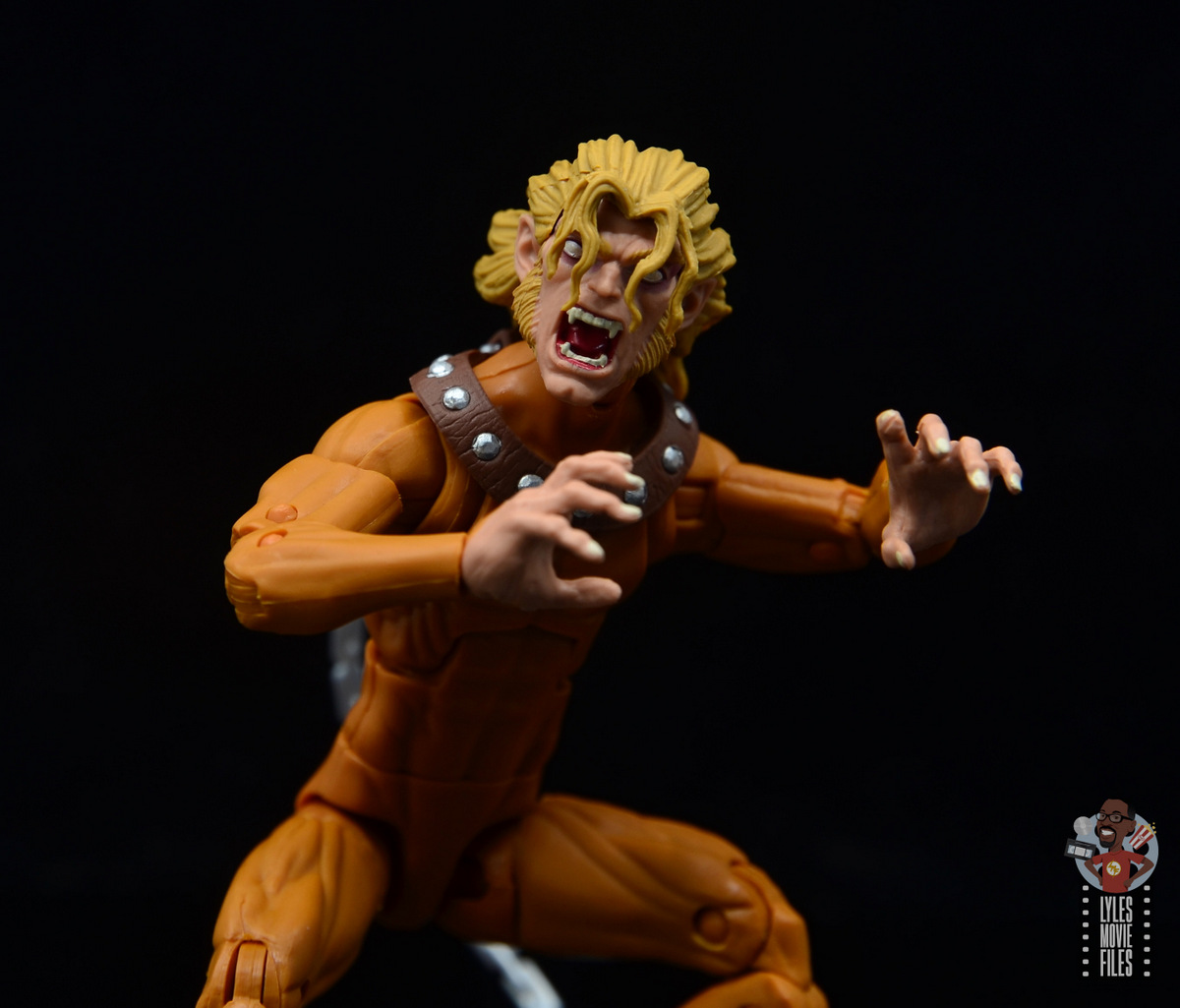 Likeness:  Wild Child was a scrawny animalistic character/sidekick to Sabretooth. It seems odd that Hasbro opted not to include Sabretooth in this wave as they’re more of a duo act. 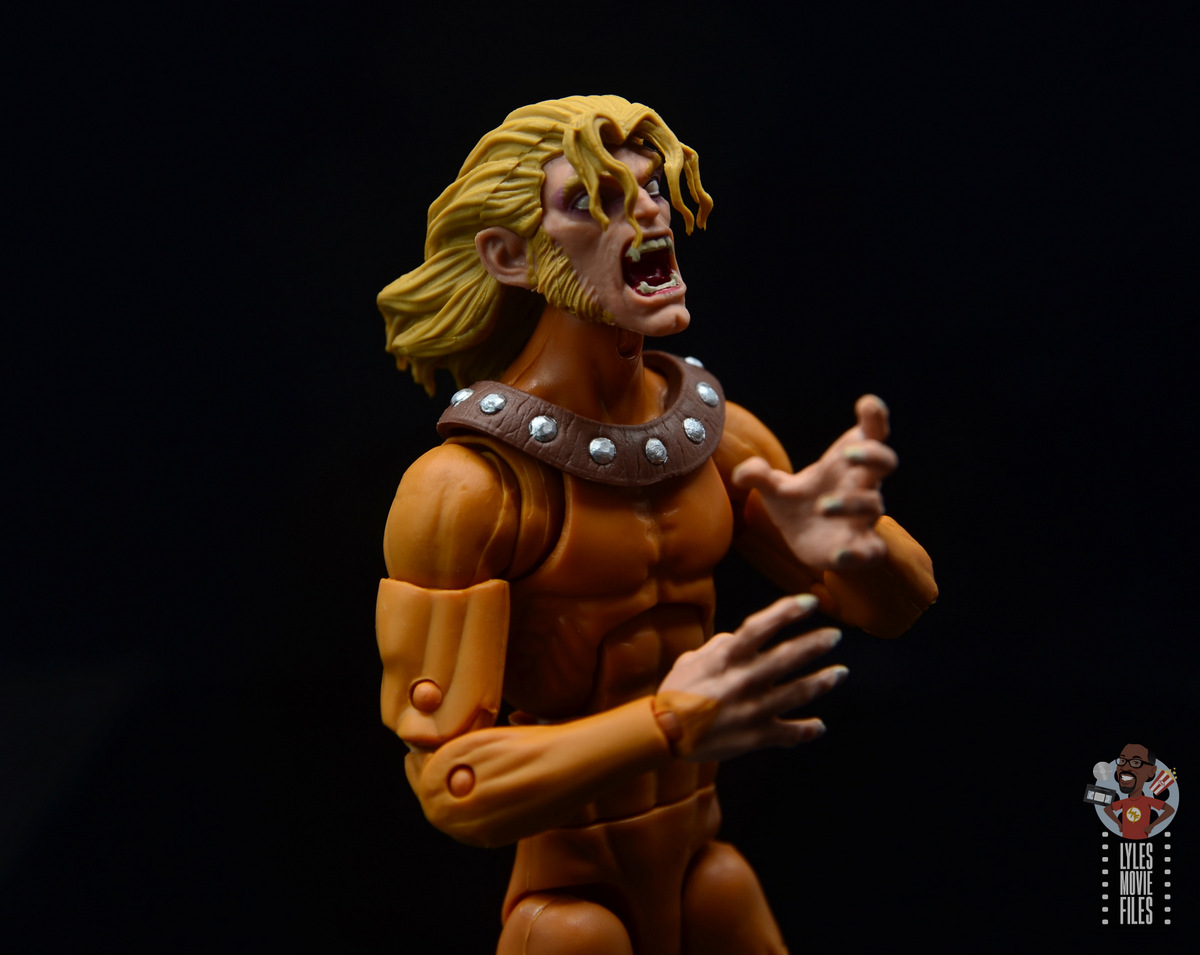 Hasbro did a great job capturing his slimmer physique and I like the clawed hands and feet. Wild Child’s head sculpt is terrific as well capturing his ferocious mindset.  Wild Child has his wide collar that matches up with Sabretooth’s look. It’s weathered to simulate a leather-like appearance. He comes with his long chain so Sabretooth can restrain him/toss him at their enemies. 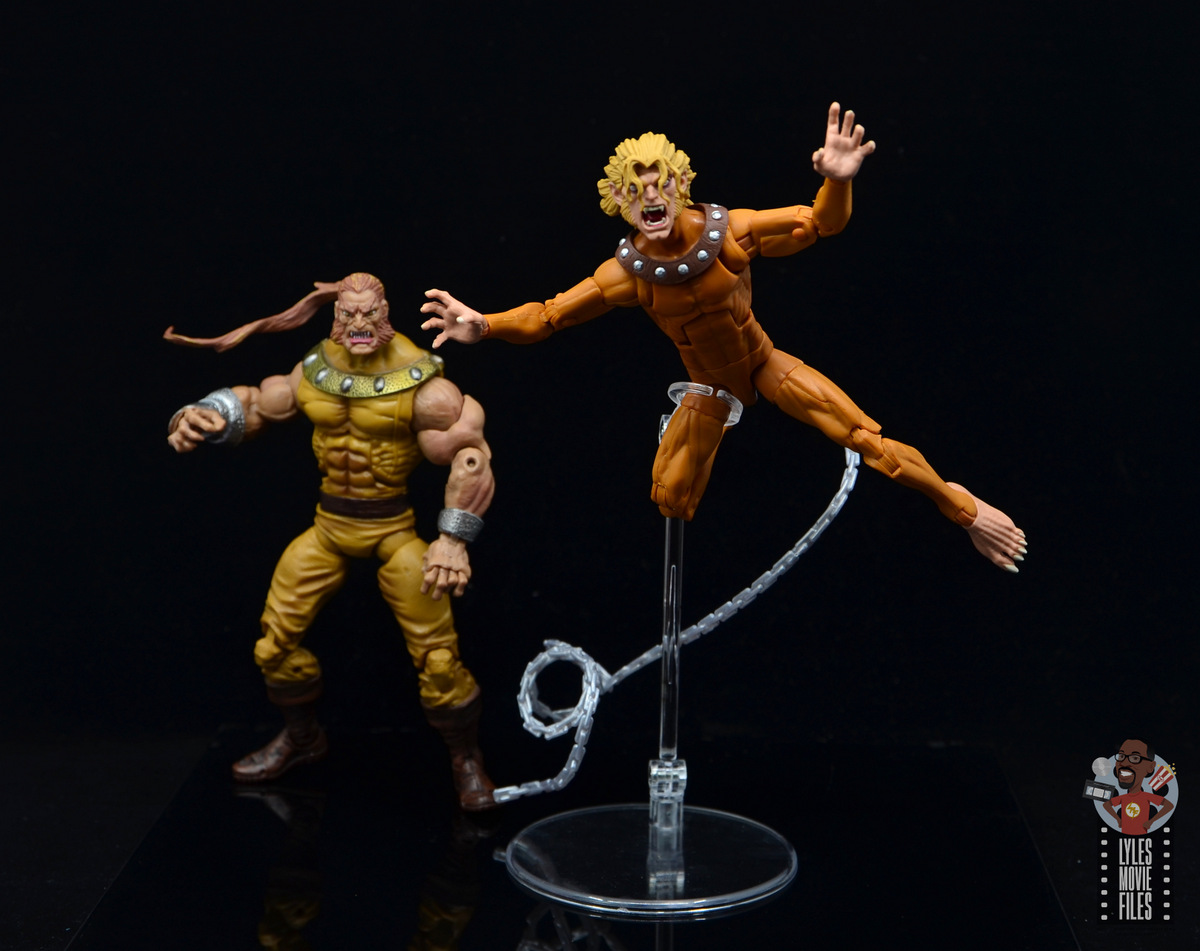 Paint:  Wild Child is pretty simple paint wise. The Toy Biz Sabretooth had a dark wash in the collar, but the comic version was simpler like the figure. I do wish the chain had some wash as it’s the one area that looks “toy cheap.” 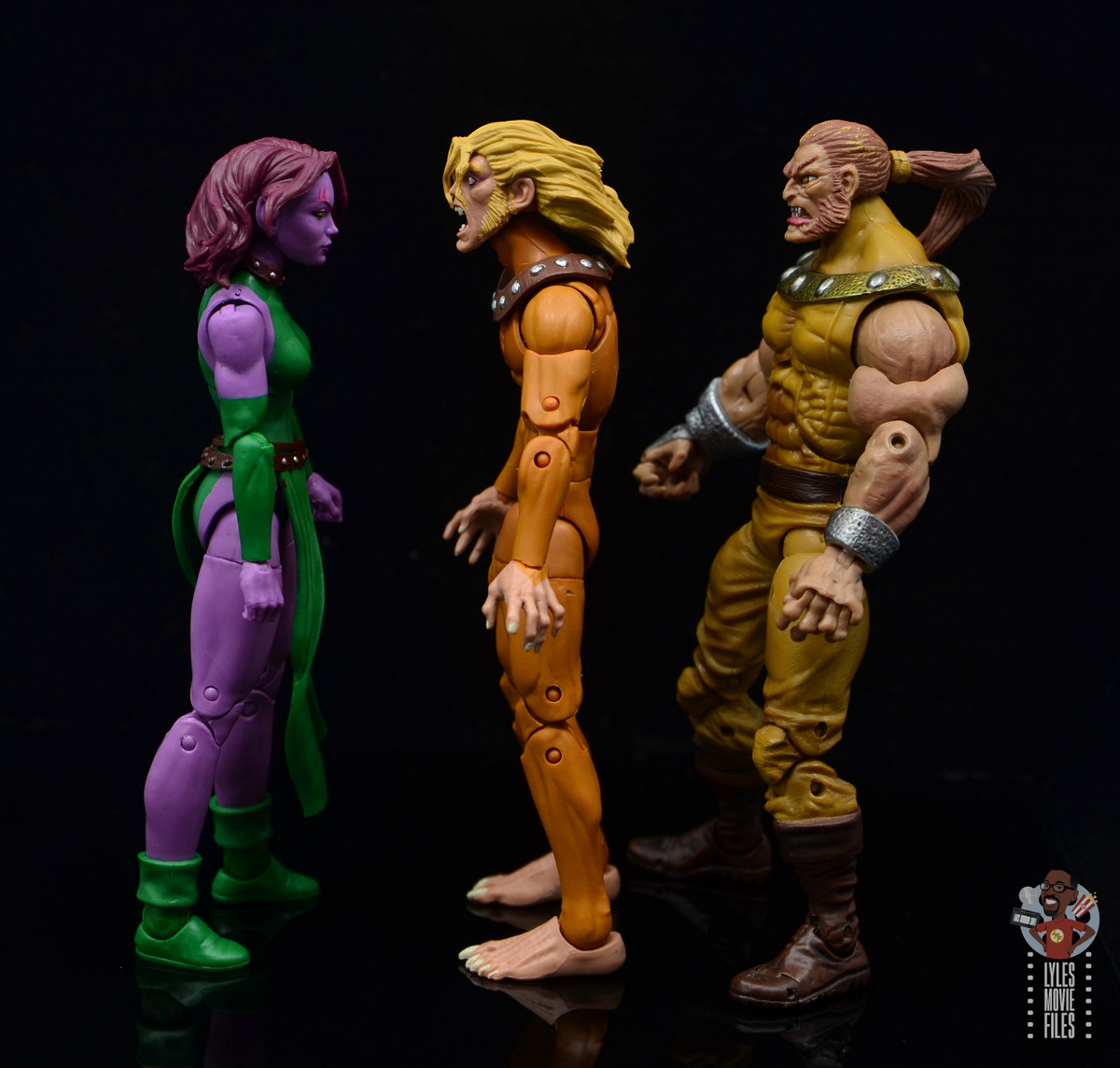 Scale:  I feel like Wild Child is a little taller than necessary, but I’ll be able to keep him hunched over to avoid any scale issues. When Hasbro does get around to making their take on Sabretooth hopefully he’ll be on one of the broader and taller bodies wide enough for Wild Child to hitch a ride. 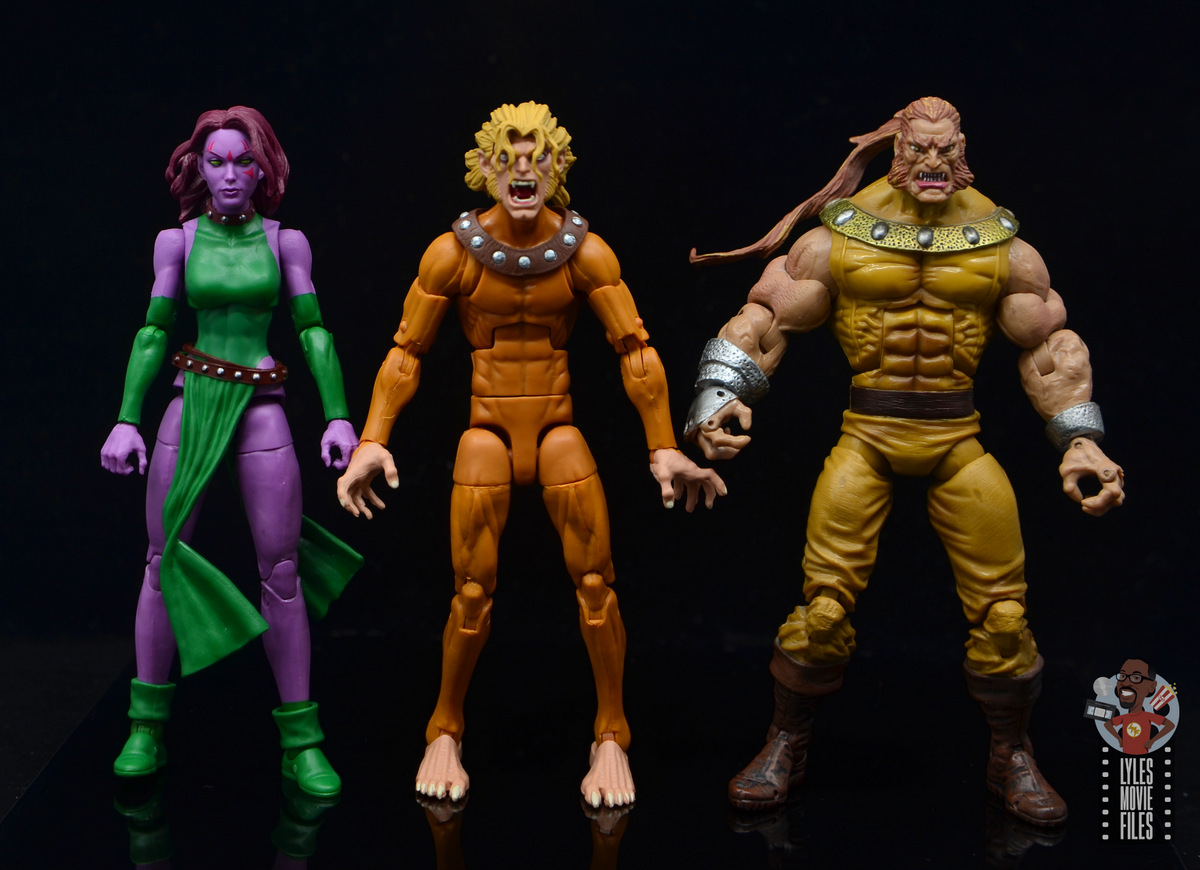 Articulation:  Wild Child is a flailing, crouching character who should always looked like he’s poised to attack. I’m impressed how easily the figure can hit those poses. The one limitation is I can’t have him crawling and get his head to move back enough. 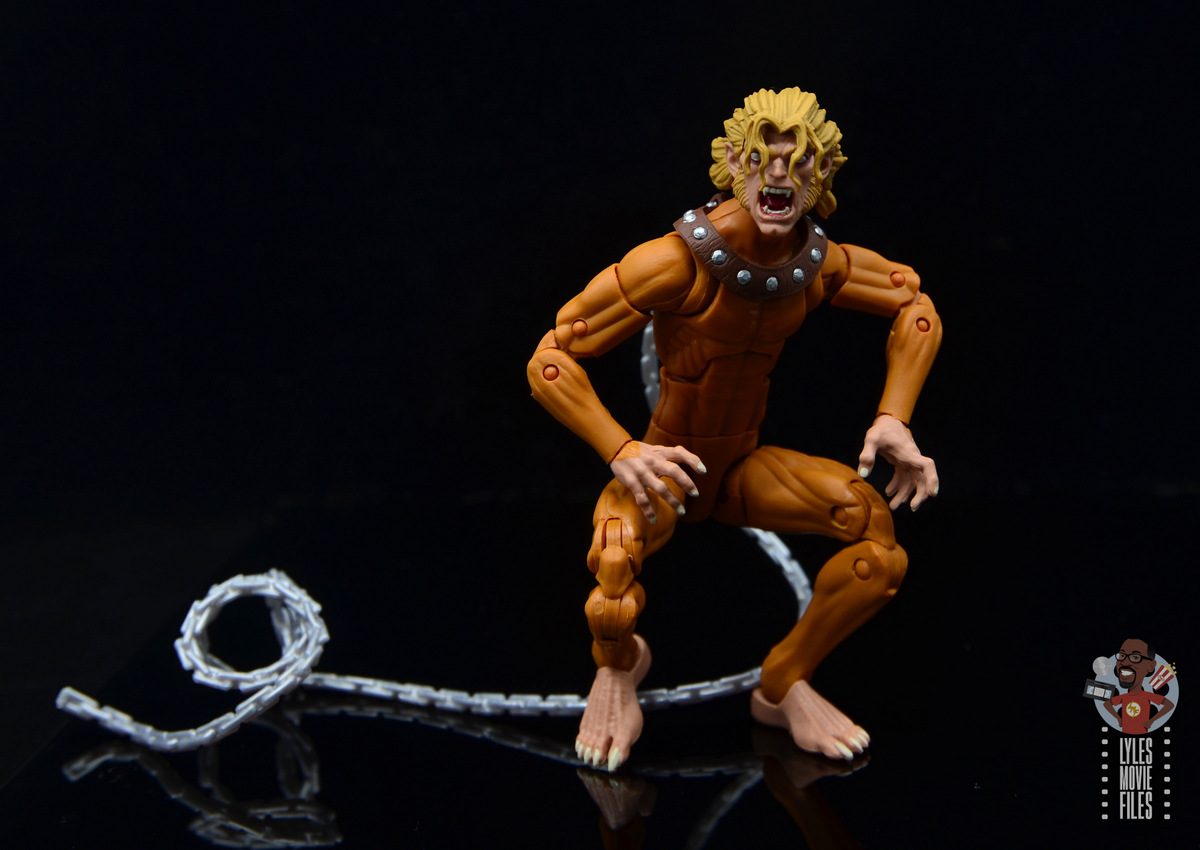 We’ll have to hold off on some judgment until Sabretooth gets released as the main thing is I’d want to have him be slung over or crawling atop Sabretooth’s shoulder. Still, this figure can manage to do that to some degree even with the Toy Biz version. 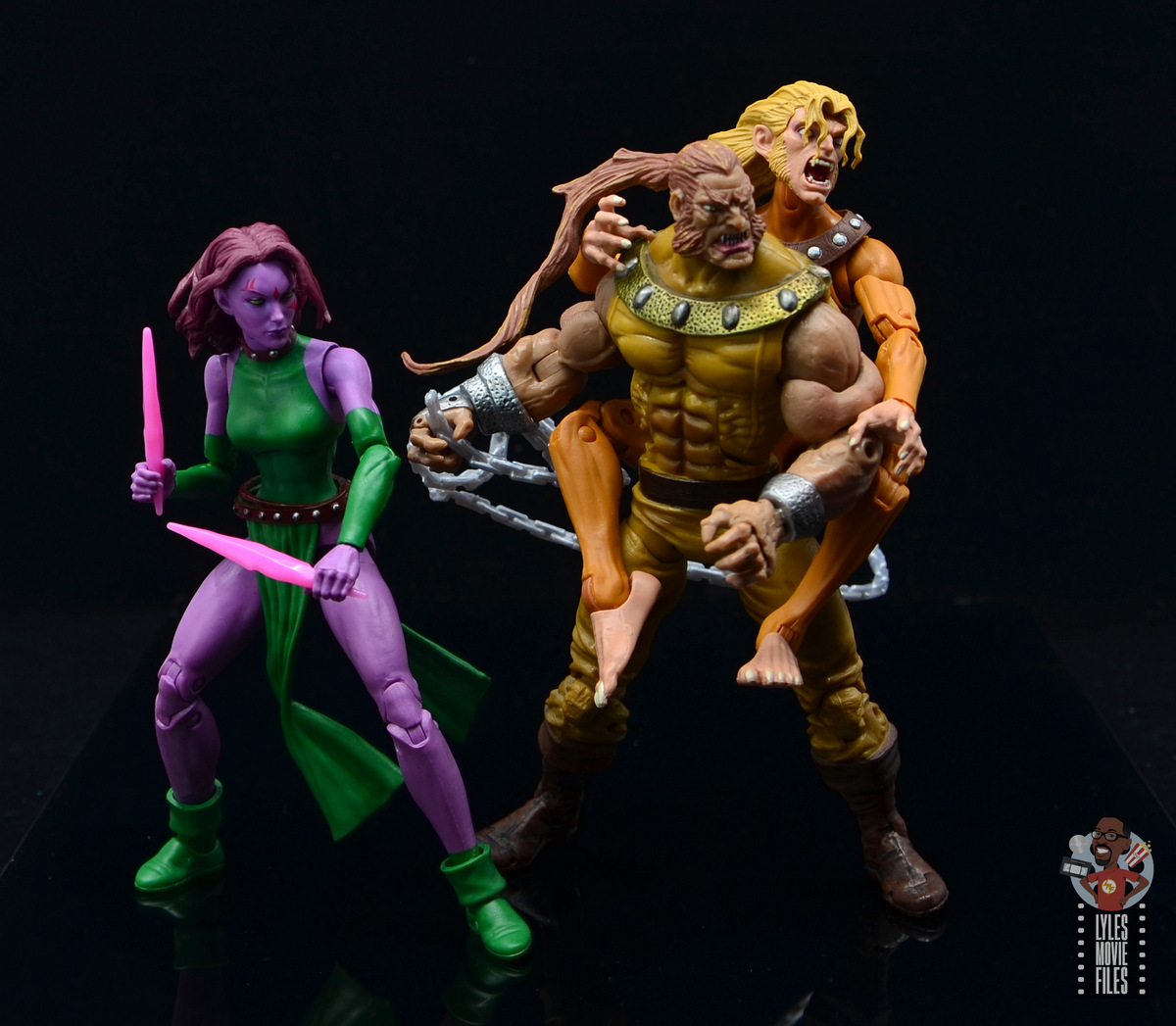 This body allows for some tight crouching poses and the butterfly joints will make for easy clawing, slashing attacks. 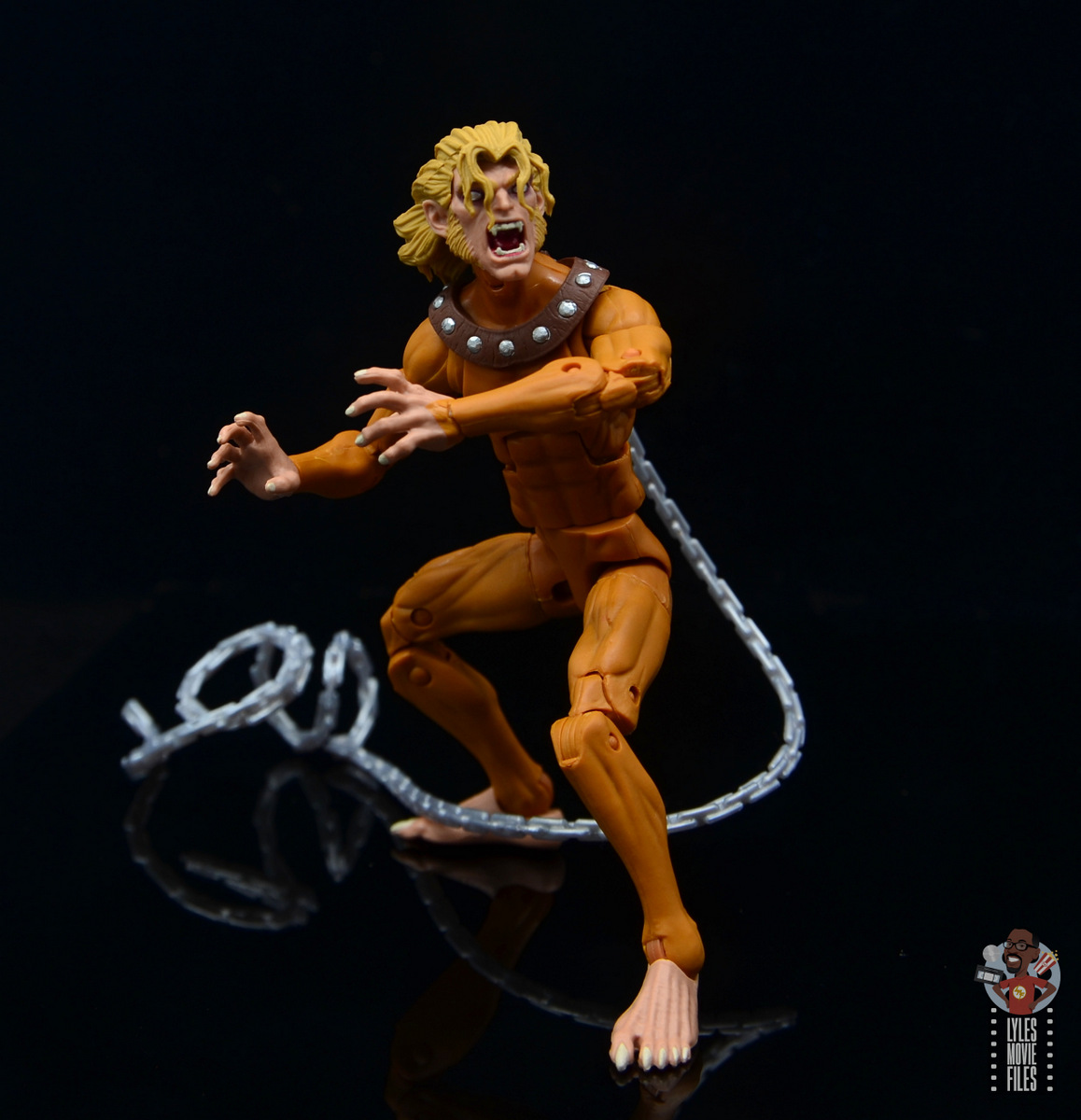 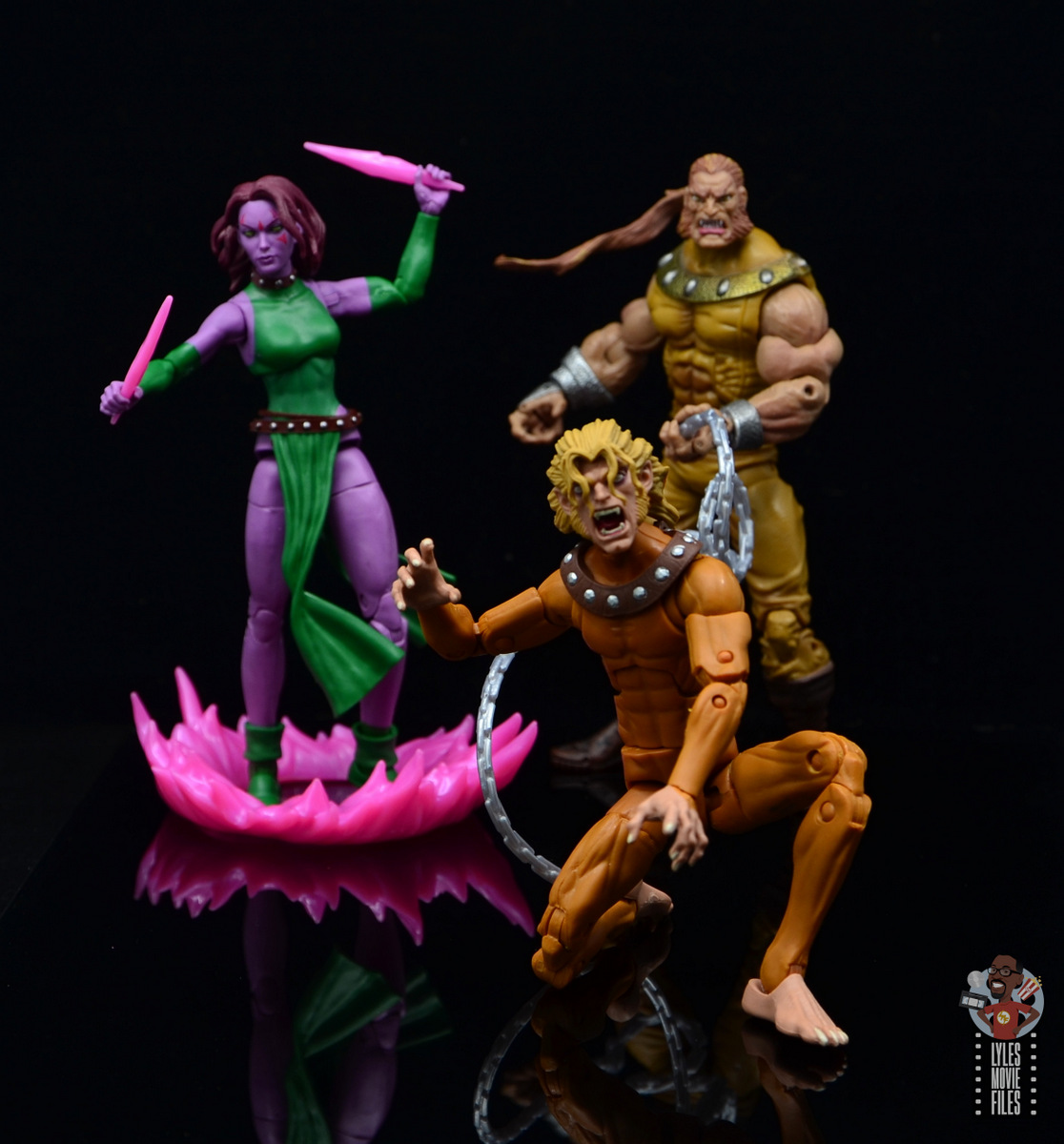 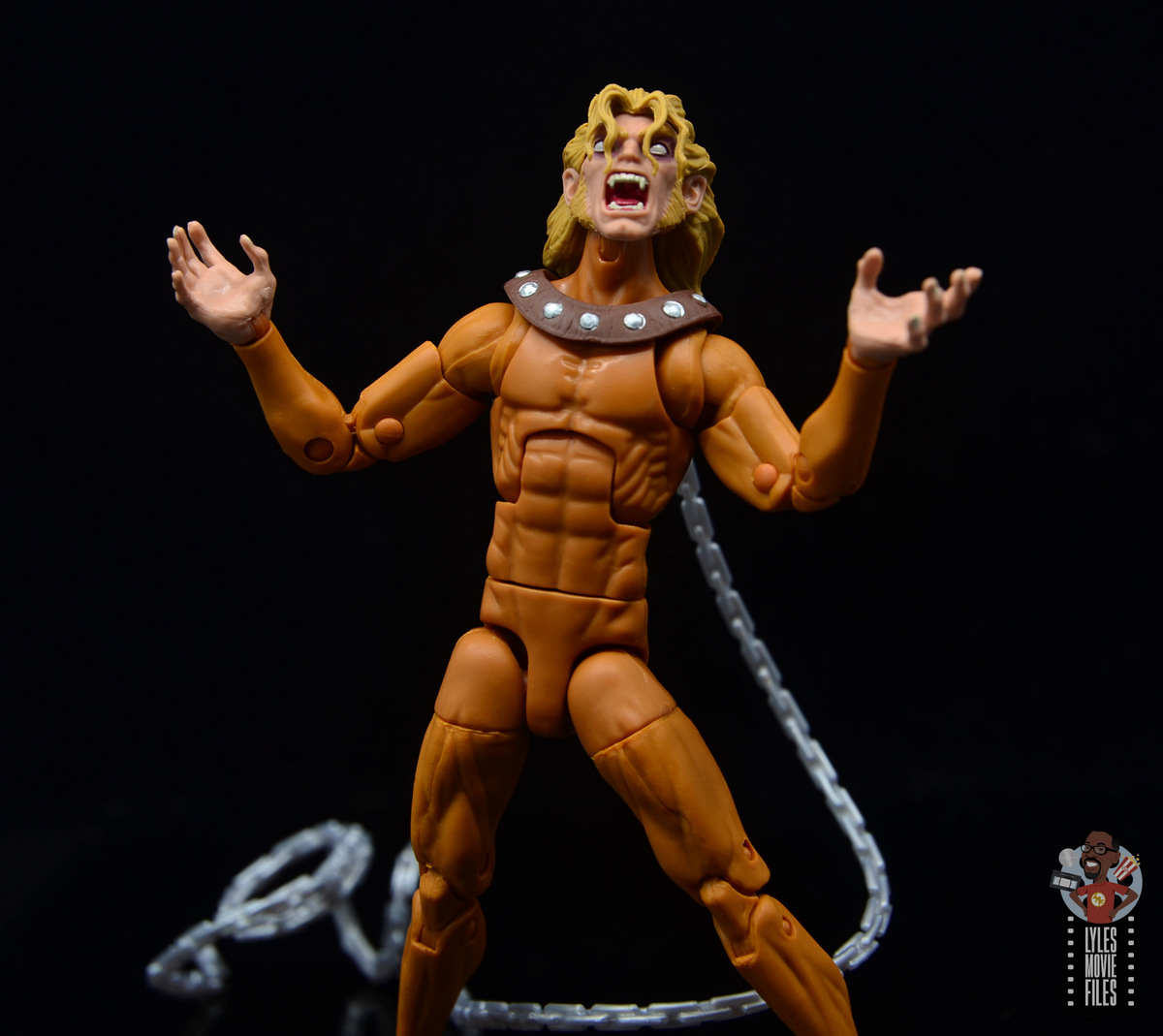 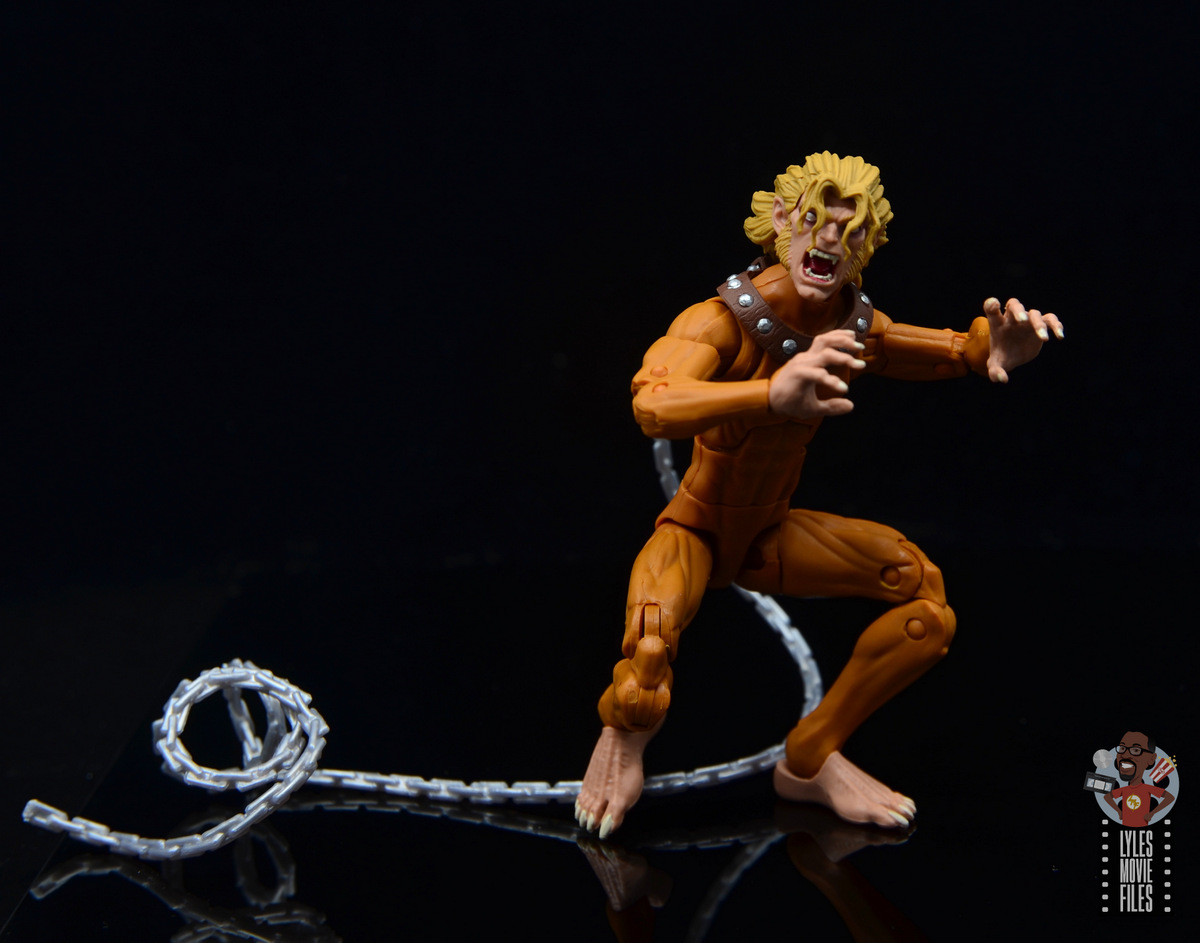 Wild Child also has back section of the Build-A-Figure Sugar Man. 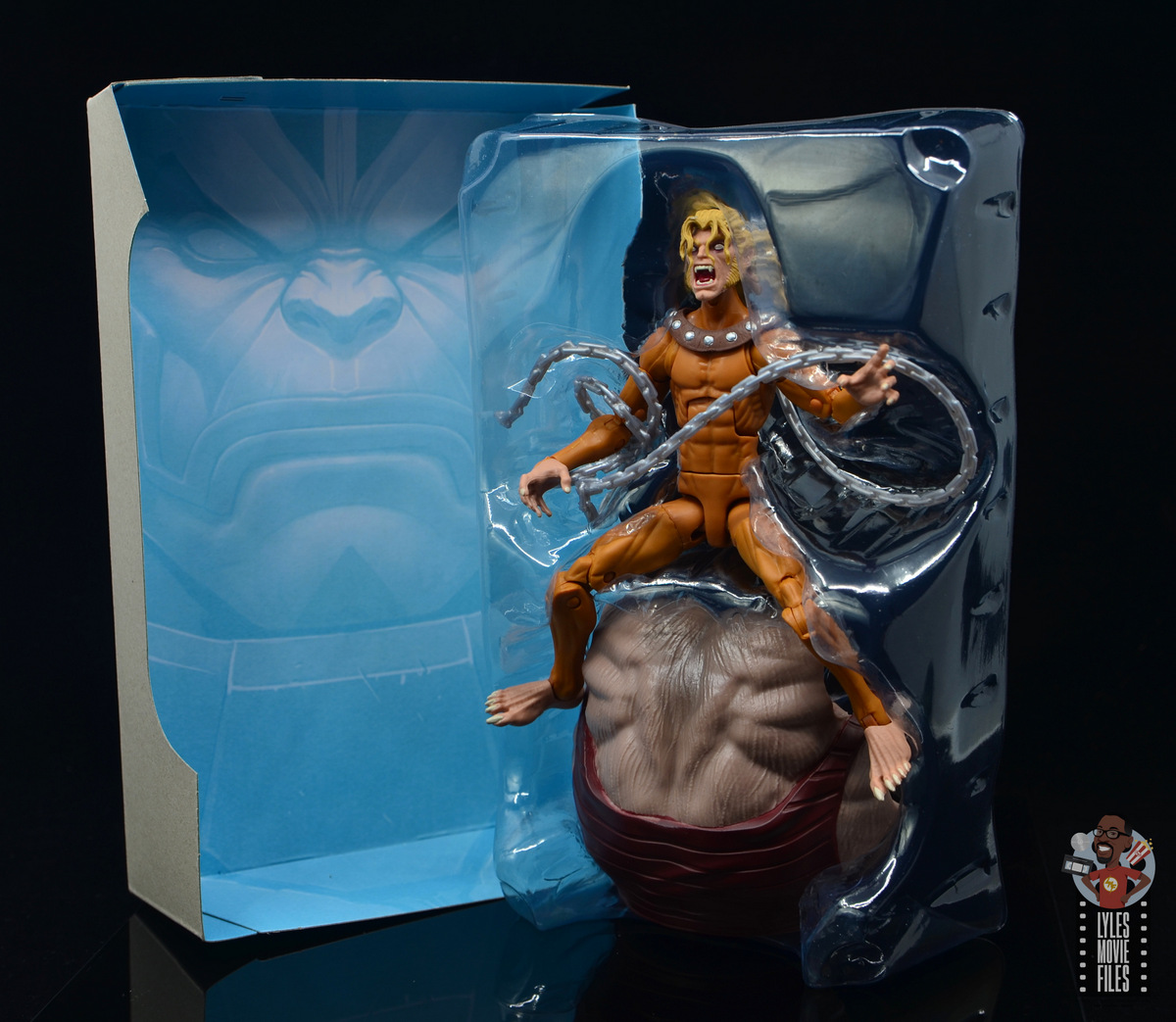 Worth it?  I was able to get Wild Child for a little under $20 thanks to a sale at Target. Expect to pay around that price for him online and at retail. 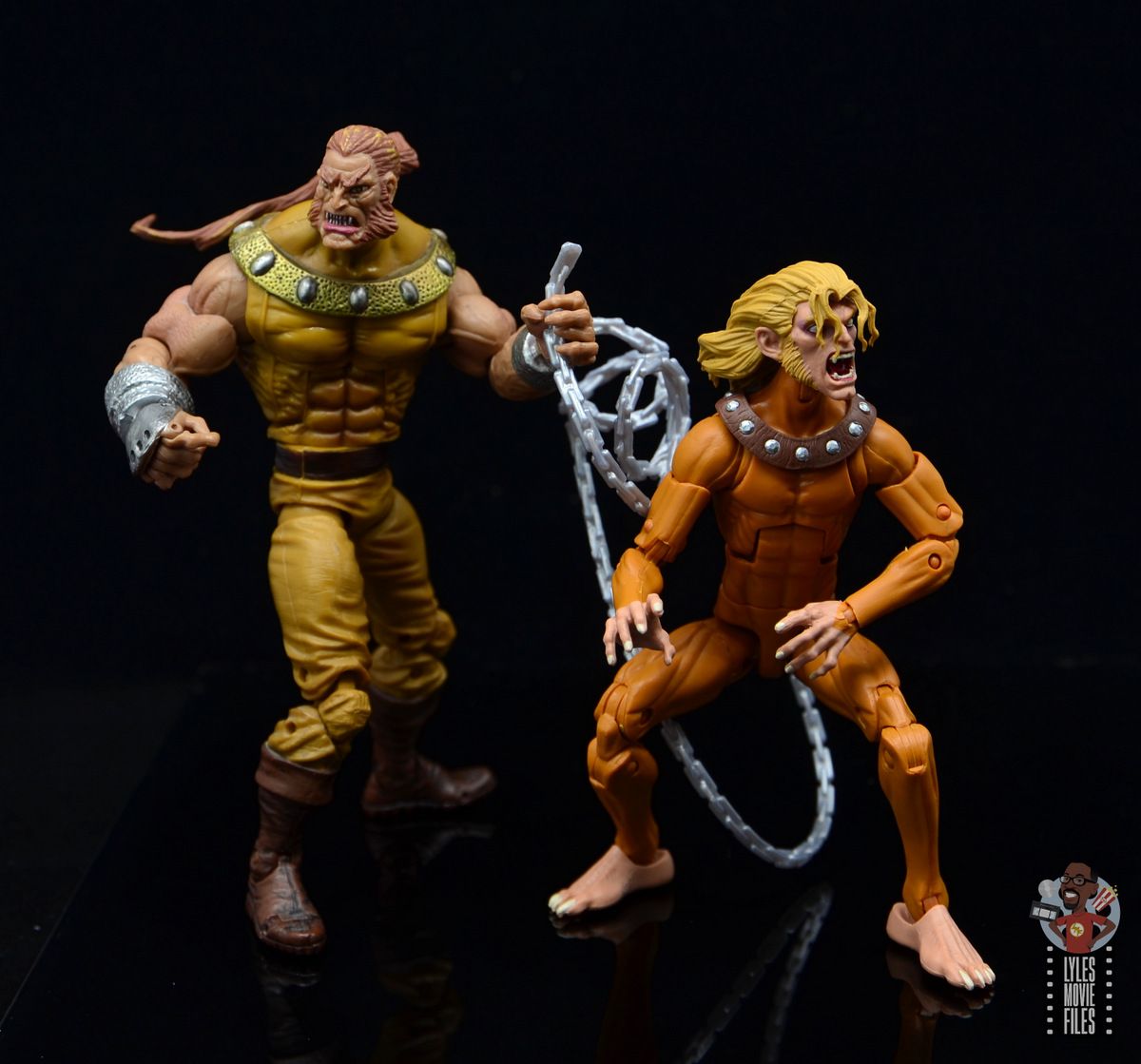 Where to get it?  This wave has hit retail. I’m not making figure runs yet so my purchases since March have all been online. Wild Child is currently available on Target, Entertainment Earth and Amazon.