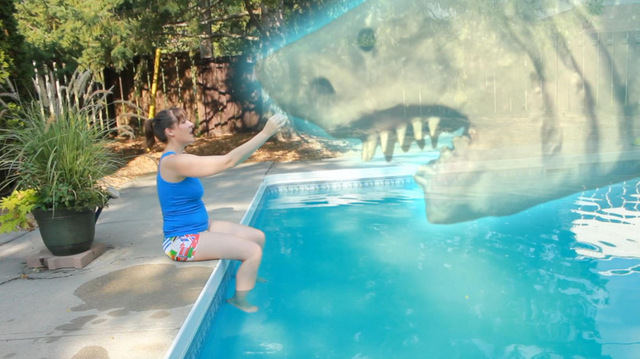 Ouija Shark had no shot at being a high-quality horror film based on the title alone. It’s not aiming for that level though as it’s clearly intended to be the next cult classic horror comedy. Only catch is somewhere along the line everyone forgot that a horror comedy needs to actually be somewhat funny.

It’s not enough to have second grade special effects, a “let’s wing it!” script mentality, wooden acting and a complete disregard for a plot. That doesn’t cut it anymore. There needs to be some heart along with humor so viewers won’t feel like the only thing Ouija Shark did was take a huge bite out of their precious time for the day.

Nothing ever makes sense. Not that you should probably expect a cohesive and thoughtful storyline from a film whose premise revolves around a killer flying ghost shark summoned by an Ouija board. Maybe the best part of the film is the complete randomness in which Jill (Steph Goodwin) acquires the Ouija board — it washes on shore of likely the worst looking beach I’ve seen. Forget sand, Jill is fine sunbathing on layers of rocks.

Jill apparently just decided to make an impromptu stop at this rocky beach or got the worst possible directions to her friend Kim’s (Robin Hodge) getaway family residence nestled smack in the middle of suburbia. Maybe Jill confused Kim’s pool with the beach? After all, they both have water…

Kim invited along a few other friends — most of whom end up spending the majority of the movie in their bikini tops. Easily the most laughable — and not in a that’s funny way, just completely ridiculous manner of laughable — is when the girls decide to have their seance in the middle of the afternoon in the lawn. 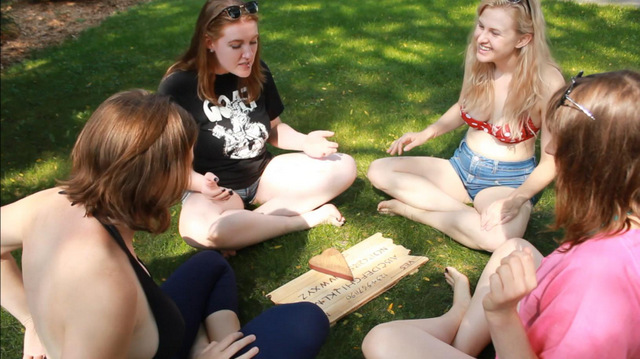 This seems to be solely for the purpose of Director Scott Patrick being able to do the tight zoom in cleavage shots without getting too much grief. One of the girls misses the seance as she’s helping the next door neighbor wash his car, which eventually leads to her gyrating in the least sexiest way possible. What’s the opposite of twerking?

Their seance randomly leads to the emergence of a flying ghost shark that has no discernible path in how it chooses its victims. Maybe you’re wondering why a flying ghost shark would target people like a competent horror movie boogeyman instead of going somewhere with the best buffet option like a football game or a concert? Let’s chalk that bit of logic up to the limited budget.

The kills range from stupid to silly. At no point with the killer shark on the loose does anyone decide to try getting in their car and driving off. Of course if that were an option we wouldn’t get the cliche stumbling over a branch in the woods scene.

Screenwriter David A. Lloyd doesn’t do anything creative with the premise and it’s just one goofy, nonsensical death scene after another based solely on a whim of what character he wants to kill off next.

It’s impressive just how crappy the Ouija Shark looks. See enough low budget movies and you’ll expect a certain level of ineptness even with the presentation of the title character in films that have no business (or budget) trying to make their movie work. I say that as being a big fan of The VelociPastor.

Ouija Shark doesn’t look menacing or particularly scary. He’s basically the addition of some jagged teeth above the threat level of Jabberjaw. At least the Hanna-Barbera cartoon shark was better animated. 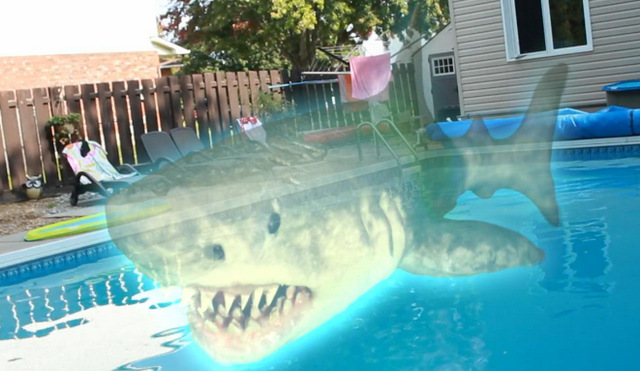 Lloyd tries a twist ending by revealing the culprit behind Ouija Shark is none other than the leader of the MAGA world. Comedy filmmakers think the former Celebrity Apprentice host is an easy target, but his actual actions in the real world are far more laughable than their scripts.

Even in a pandemic there’s not enough time to waste watching Ouija Shark.