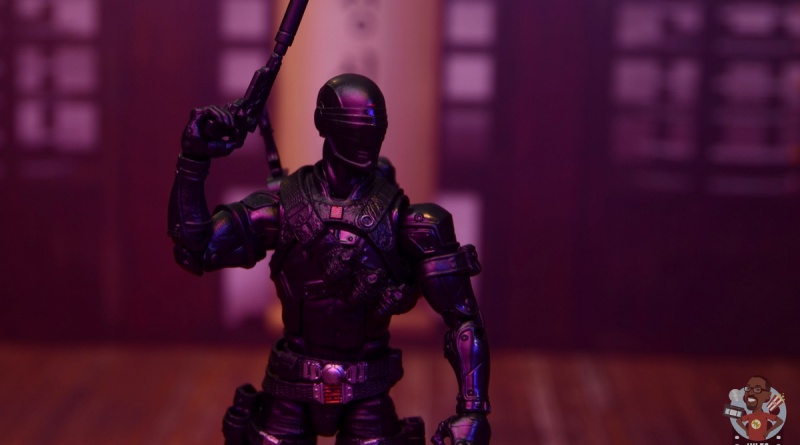 I’m waiting on Destro to arrive next month so for now this is my last GI Joe Classified Series review (boooo) and I figured I’d save the best (?) for last with Snake Eyes. After nabbing Scarlett, I was hooked on GI Joe and quickly added three more Joes to the collection with Flash, Stalker and Snake Eyes since they were the most unique of the remaining Joes. Snake Eyes was among my favorites from that first wave of figures and the comics solidified his position.

Let’s see how Hasbro did with this take on the Silent Master.

Packaging: Snake Eyes has a very orderly presentation of his accessories and weapons.  I like the reverse Star Wars Black Series red on black shading for his portraits. I do very much notice Timber is prominent on this side packaging, which has me wondering when we’ll actually see Snake Eyes’ animal sidekick. Remember kids, Snake Eyes teamed with wolves before Dire Wolves were cool. 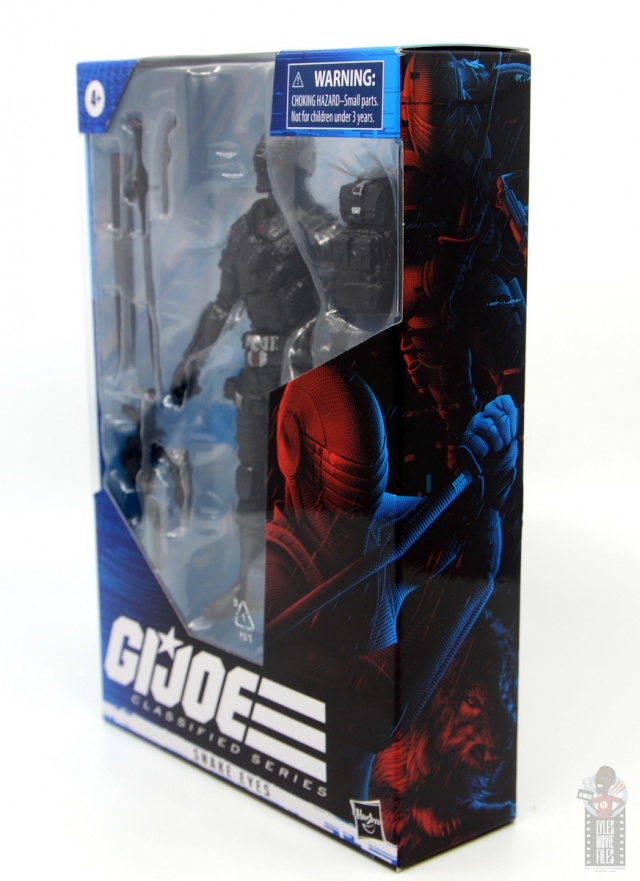 Thanks to the handy GI Joe website, we now know that Snake Eyes’ specialties are covert ops, bladed weapons, stealth and ninjitsu. Snake Eyes is the rare 4 for 4 character, which checks out though I’m surprised his sword brother didn’t merit the same ratings.

Snake Eyes is a total mystery, but when it comes to GI Joe operations, he’s the best there is. Snake Eyes is a natural fighter with abilities that border on the supernatural. His unique blend of skill, stealth and Arashikage ninja training, and strength of character makes him an unparalleled combination: a hybrid-ninja commando who still hasn’t reached the limits of his potential or his true destiny as a warrior. 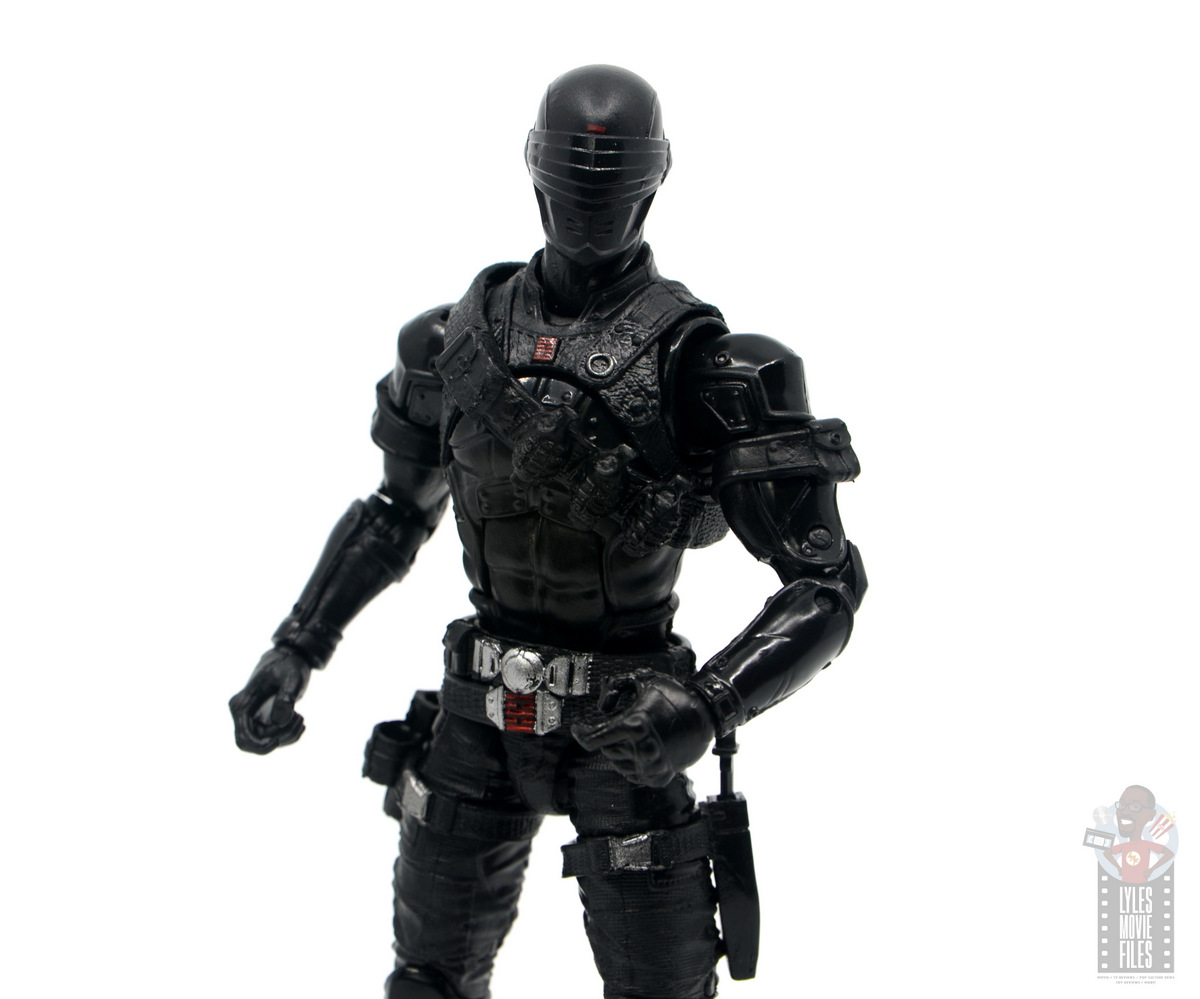 Likeness: I’m curious if this design is similar to the look for Snake Eyes’ solo movie attire. It’s loaded with the kinds of extra padding and design elements I’d associate with a movie costume to break up the comic inspired spandex outfits. His second version outfit remains one of my all-time favorite Joe designs so I was excited to see elements of that incorporated into his Classified Series figure. 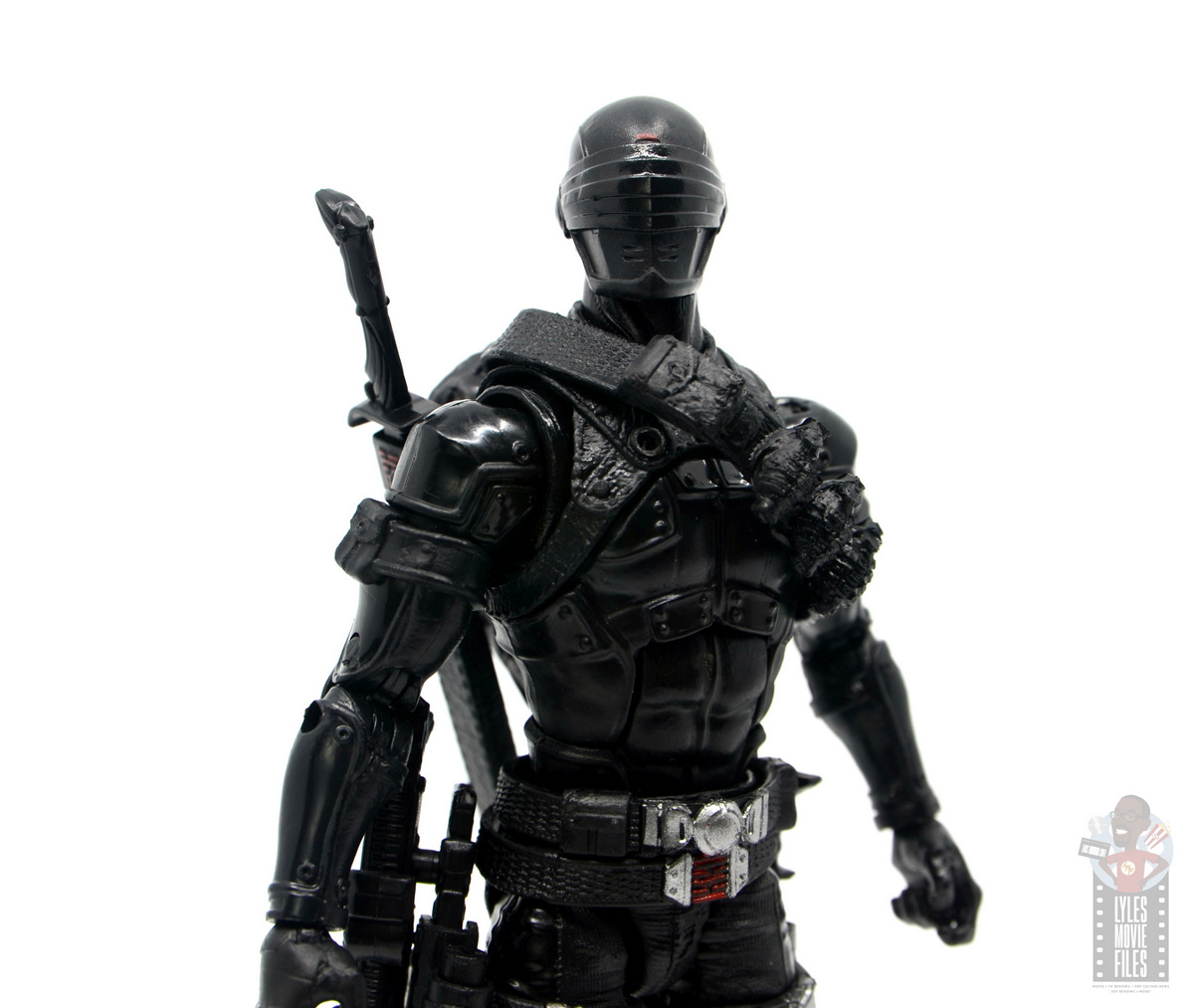 There’s the visor, bicep straps, strap across the chest with three grenades, two belts and two holsters. I do miss the dart launcher though. Like the other figures there’s some solid texturing along the pants.

I kinda dig the light armor plating Snake Eyes has on his arms and chest. The kneepads also make sense with him. I’m not sure I like the jawline connection piece of the visor unit as it seems less like cloth covering and more of a helmet. 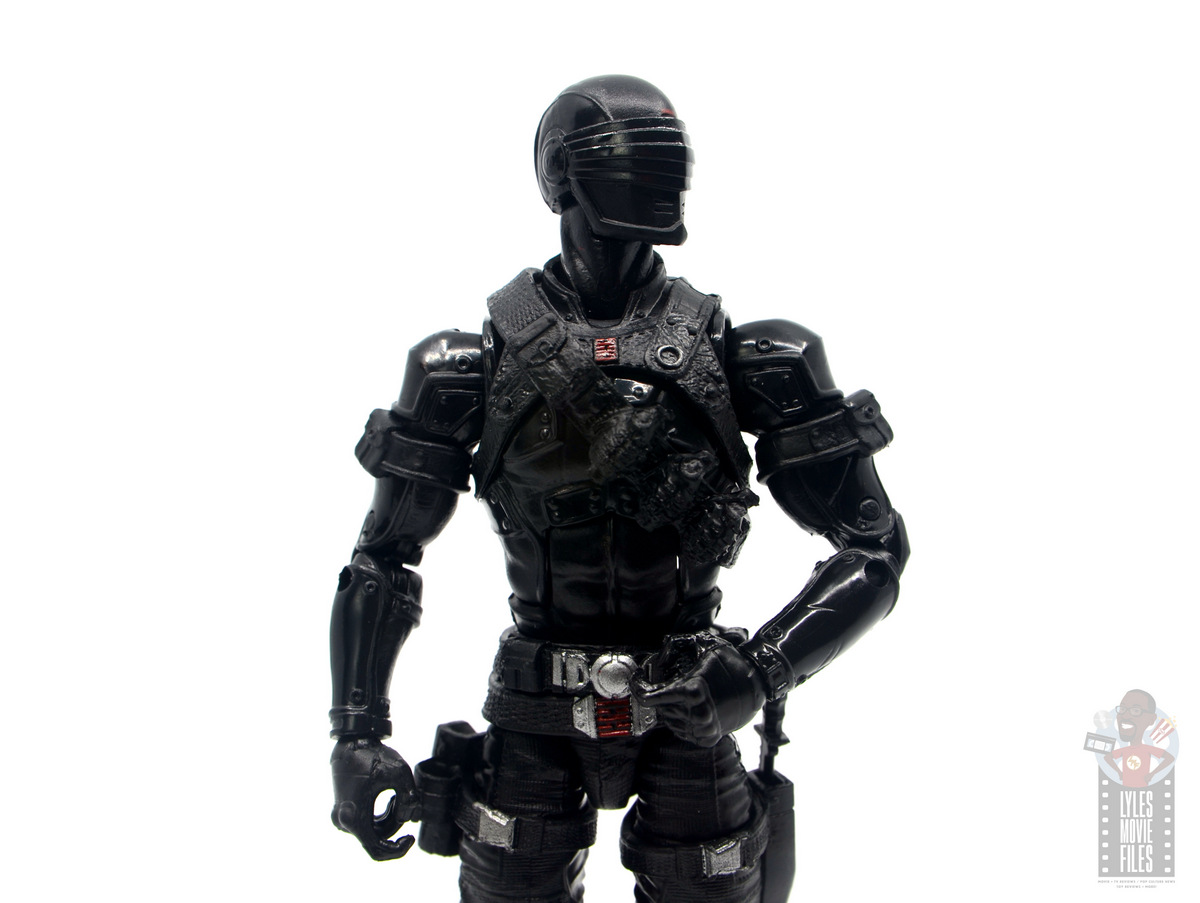 Paint: Snake Eyes’ version 2 look incorporated more grey to break up the all black appearance of the first figure. This figure splits the difference with a glossy black and a matte black with very minimal silver paint on the belt and thigh straps. 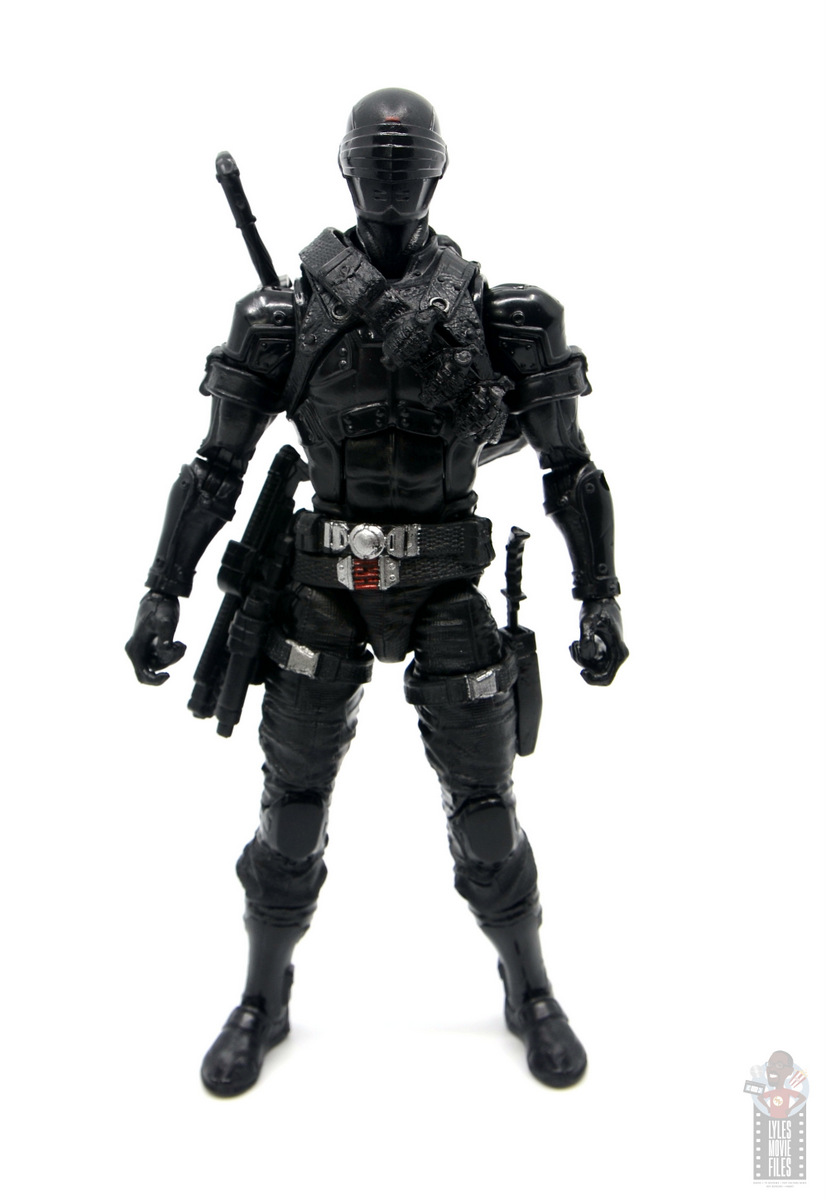 There’s not enough paint to complain about anything although I am not a fan of the Arashikage Clan logo on the belt or the red nub on the forehead. Of course maybe that’s meant to scare anyone that’s actually in the know. 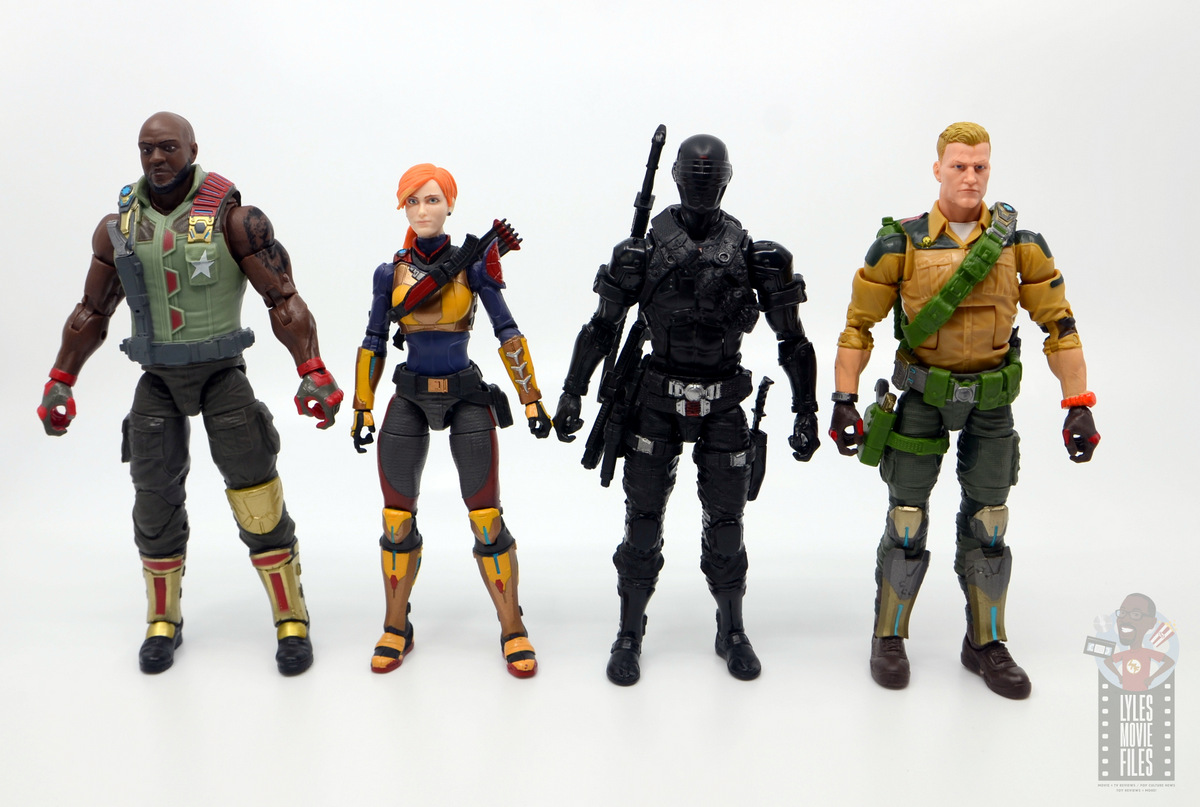 Scale: I appreciate the Snake Eyes is slimmer and shorter than both Roadblock and Duke yet still taller than Scarlett. Hopefully Hasbro can stick to this strong varied scale so there’s a mix of heights among the team. 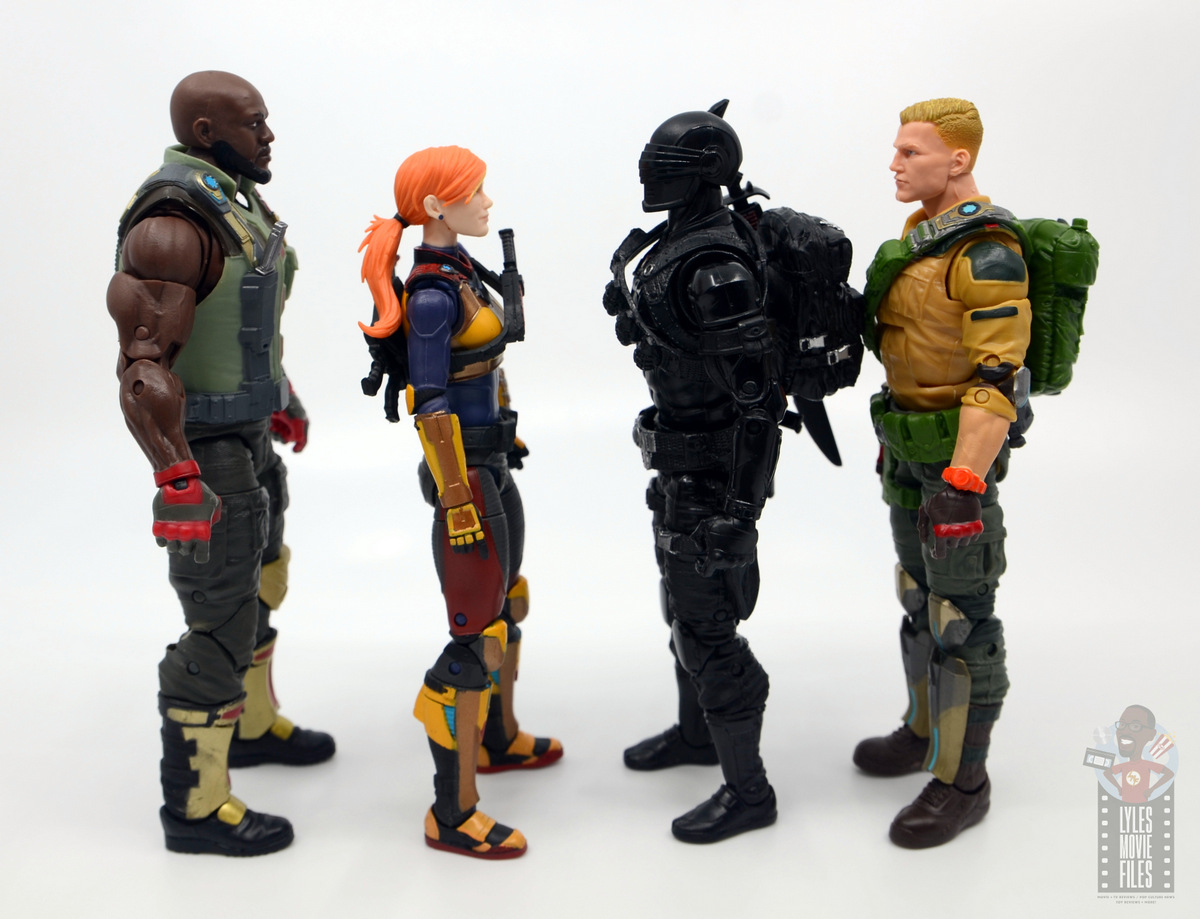 Articulation: As the team ninja commando, Snake Eyes needs to be able to sneak into tight spots and be able to take on armadas of Cobra troops pretty much by himself. And this figure represents one of the strongest Marvel Legends killers on the articulation scale at retail price to date. 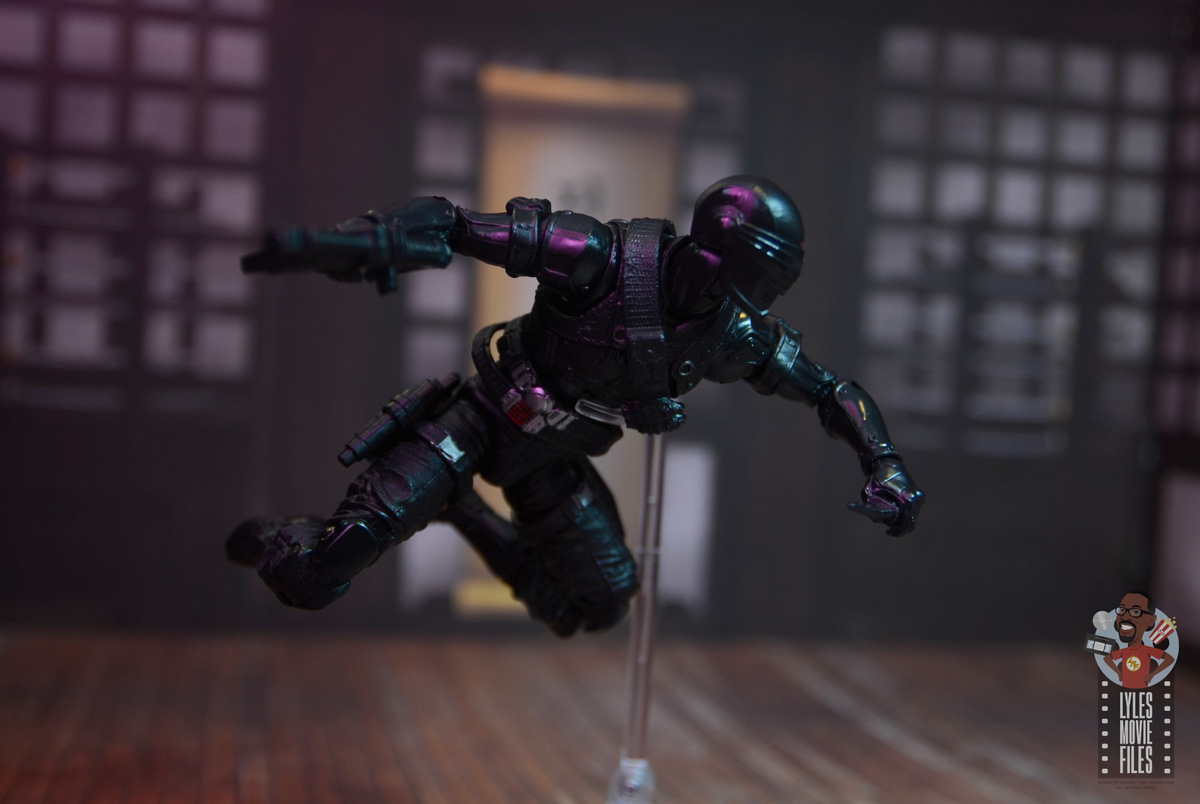 Basically if you can come up with a pose, Snake Eyes can hit it. This is the kind of Snake Eyes figure I dreamed about having as a child or a 40-something grown tail dude. 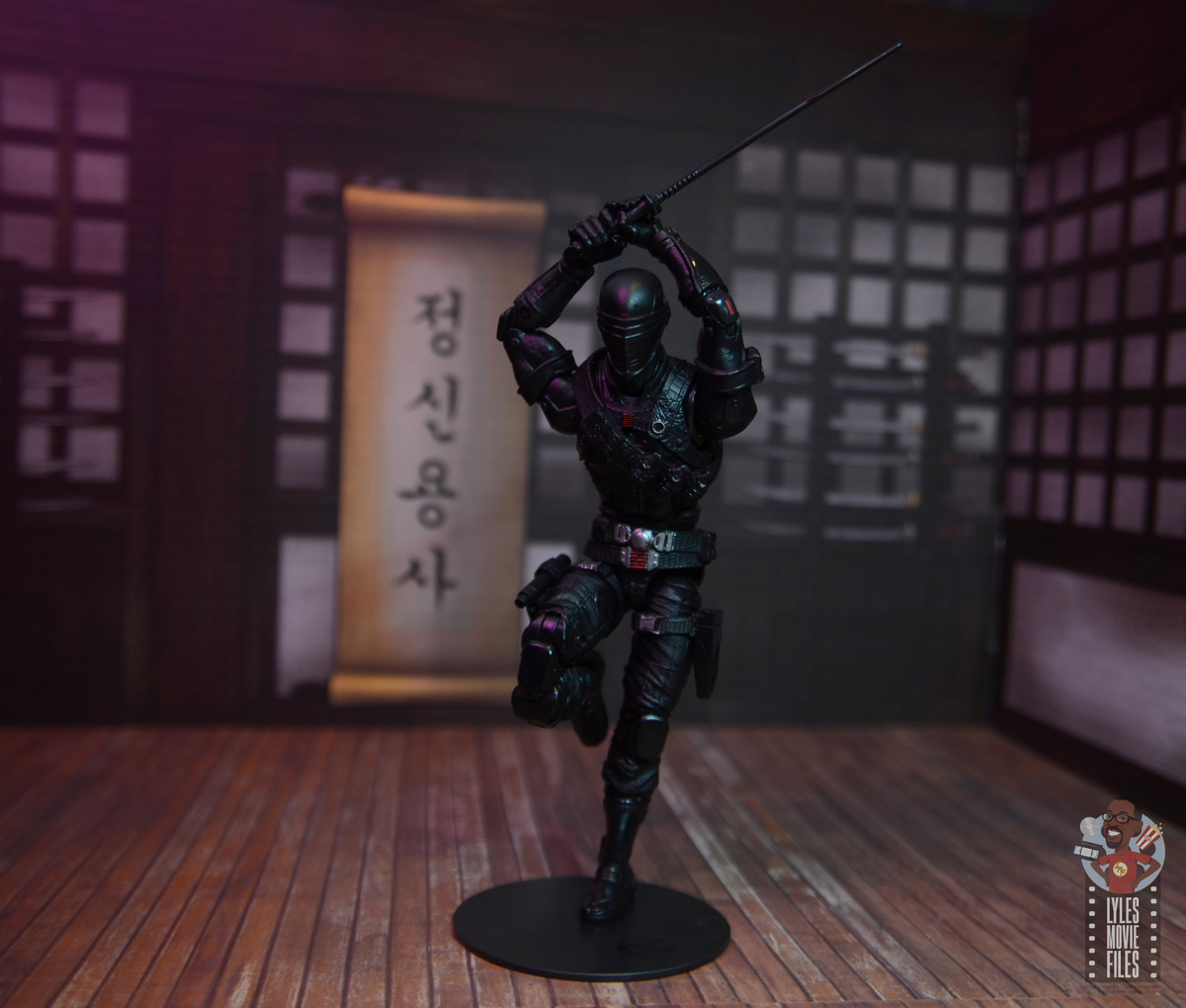 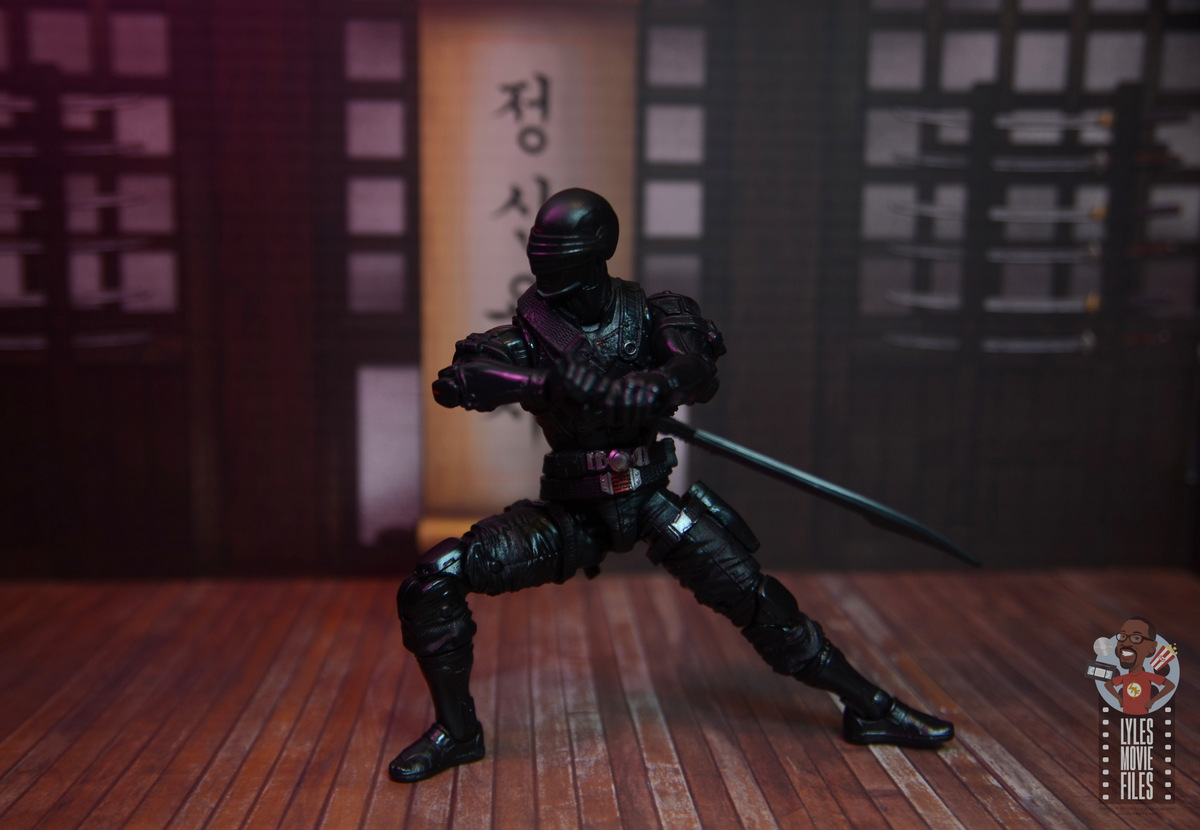 Accessories: While not as loaded as the deluxe version, Snake Eyes does come with a nice assortment of accessories.

Like the ver. 2 figure, Snake Eyes has a katana sword with a sweet handle and a scabbard once again proudly repping his role with the Arashikage Clan. 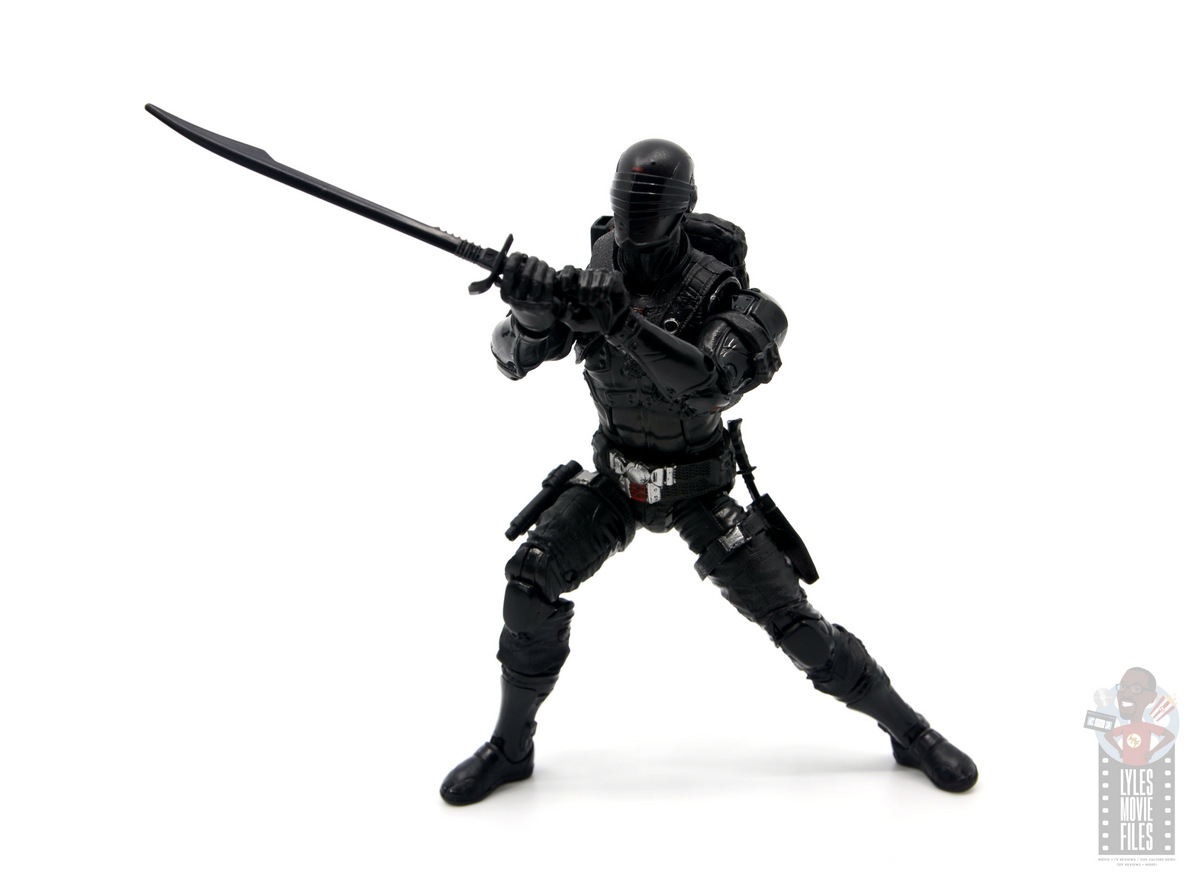 He’s also got a small edged knife. As a special bonus feature with the retail version, the knife doesn’t fit tightly into the sheath. 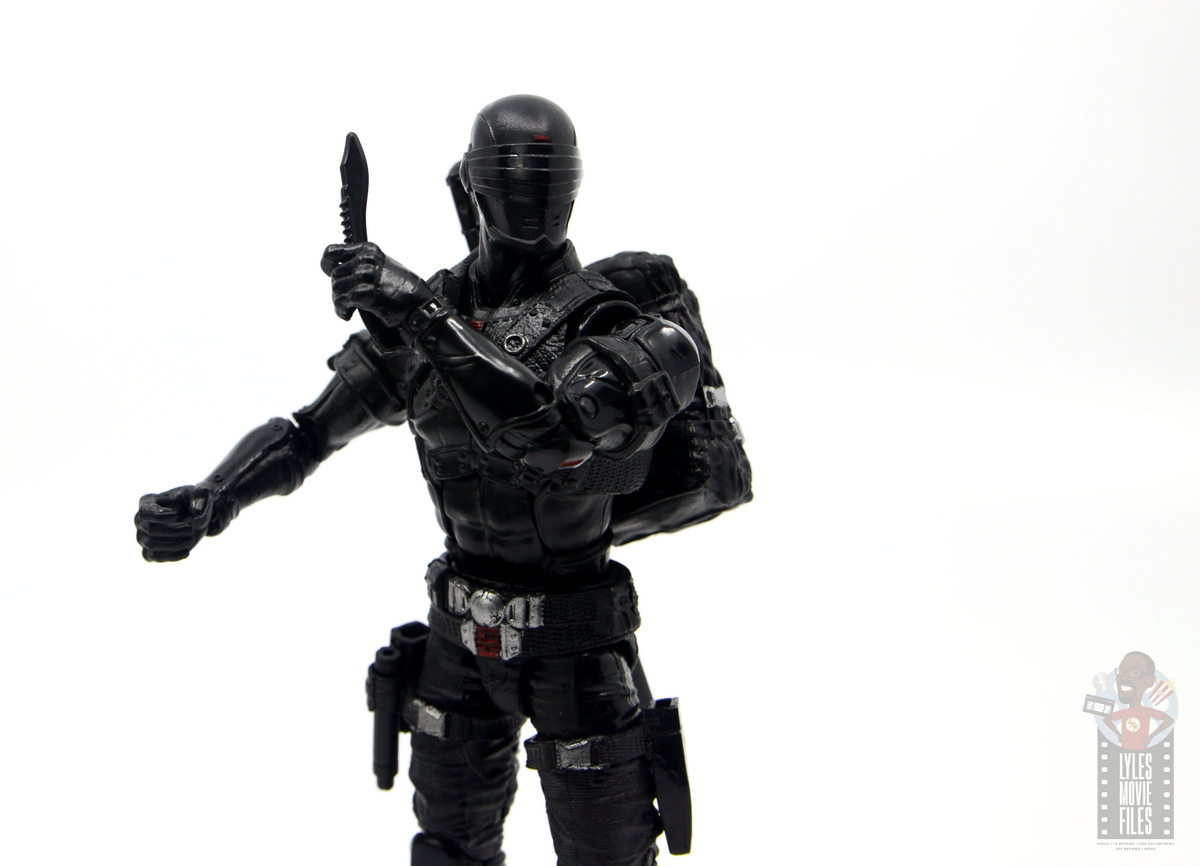 It’s a design flaw that a lot of collectors have fixed by dremeling out more space. 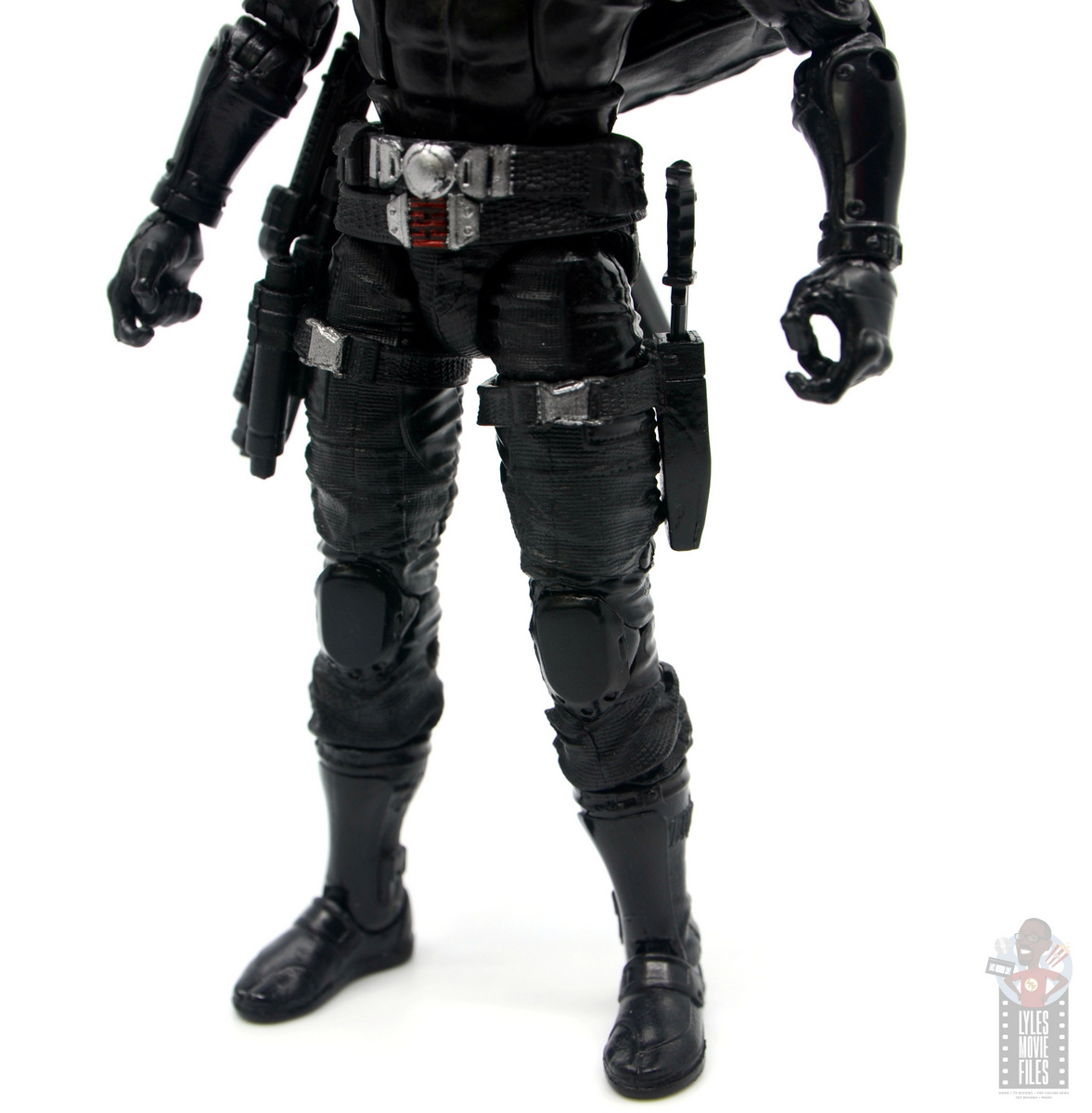 I’m not the biggest fan of the guns. They’ve got weird holes to allow them to be clipped onto Snake Eyes’ leg. 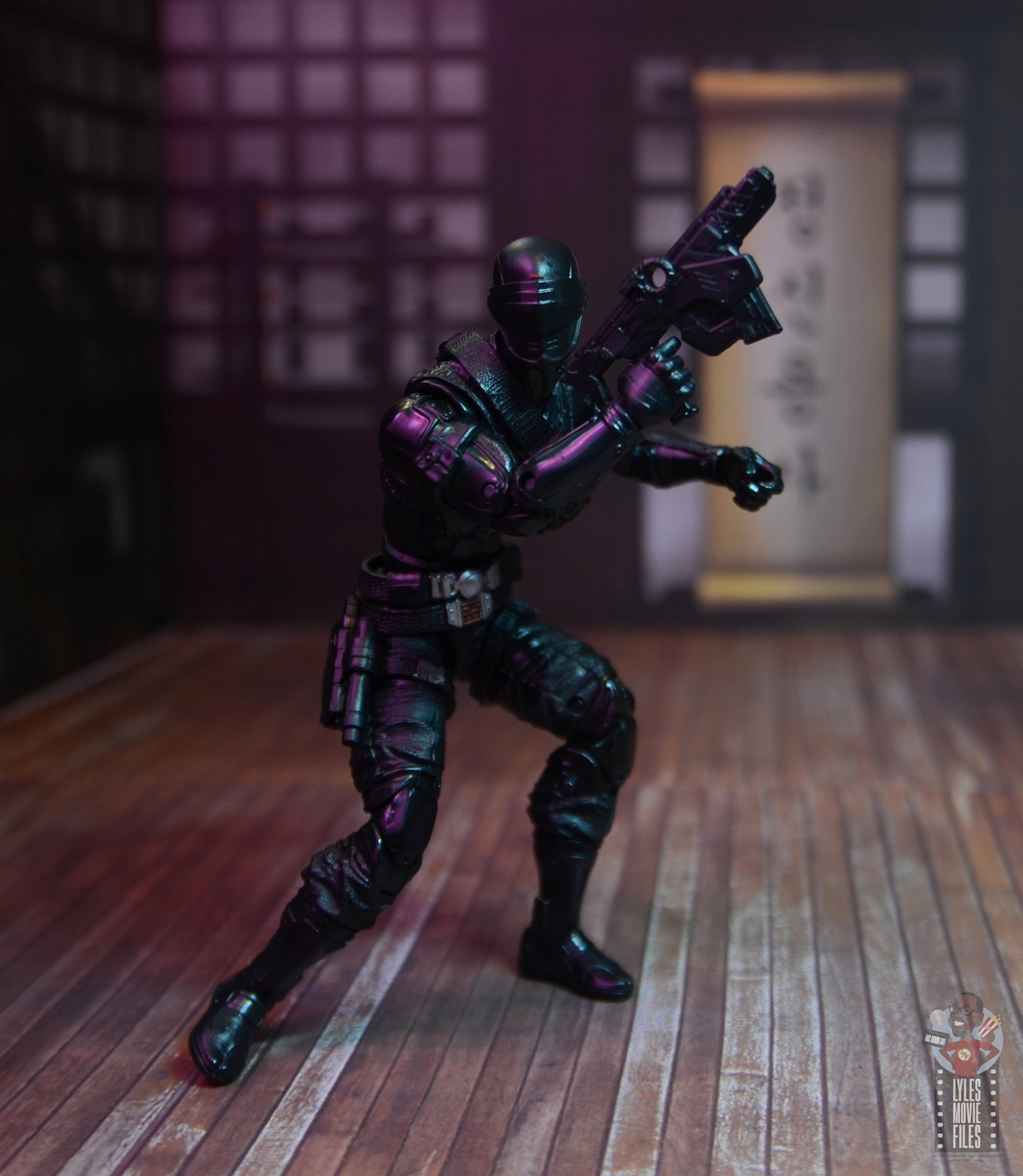 Maybe I’ll get used to them over time…or I’ll swap them out with other 6-inch scale guns. I’m sure I’ve got a spare UZI lying around somewhere…. 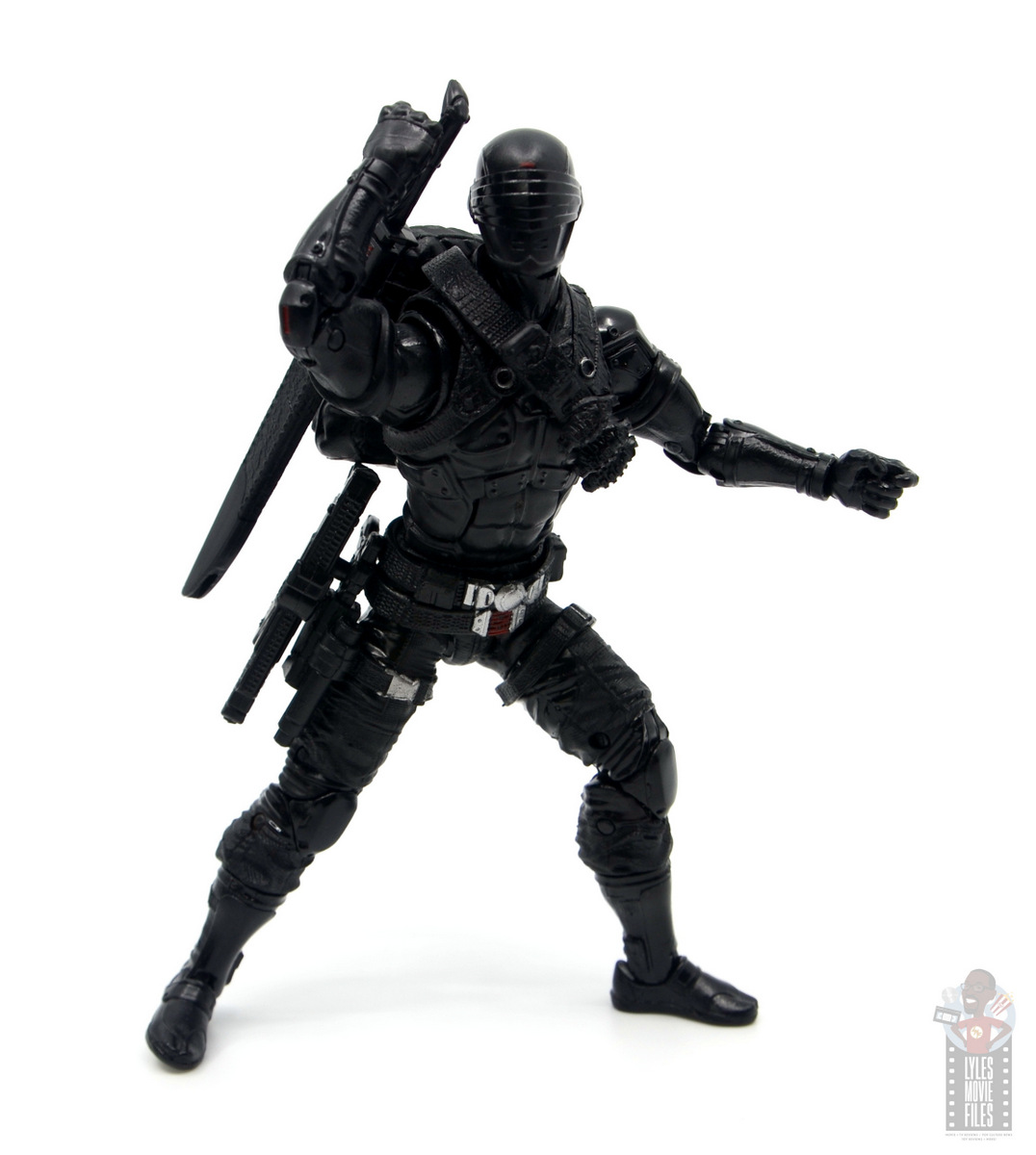 Finally, he comes with a larger backpack again a throwback to the ver. 2 figure.

Worth It? The only better value at this price point with an original dedicated sculpt would be other figures in this line. This is an impressive figure for $20. 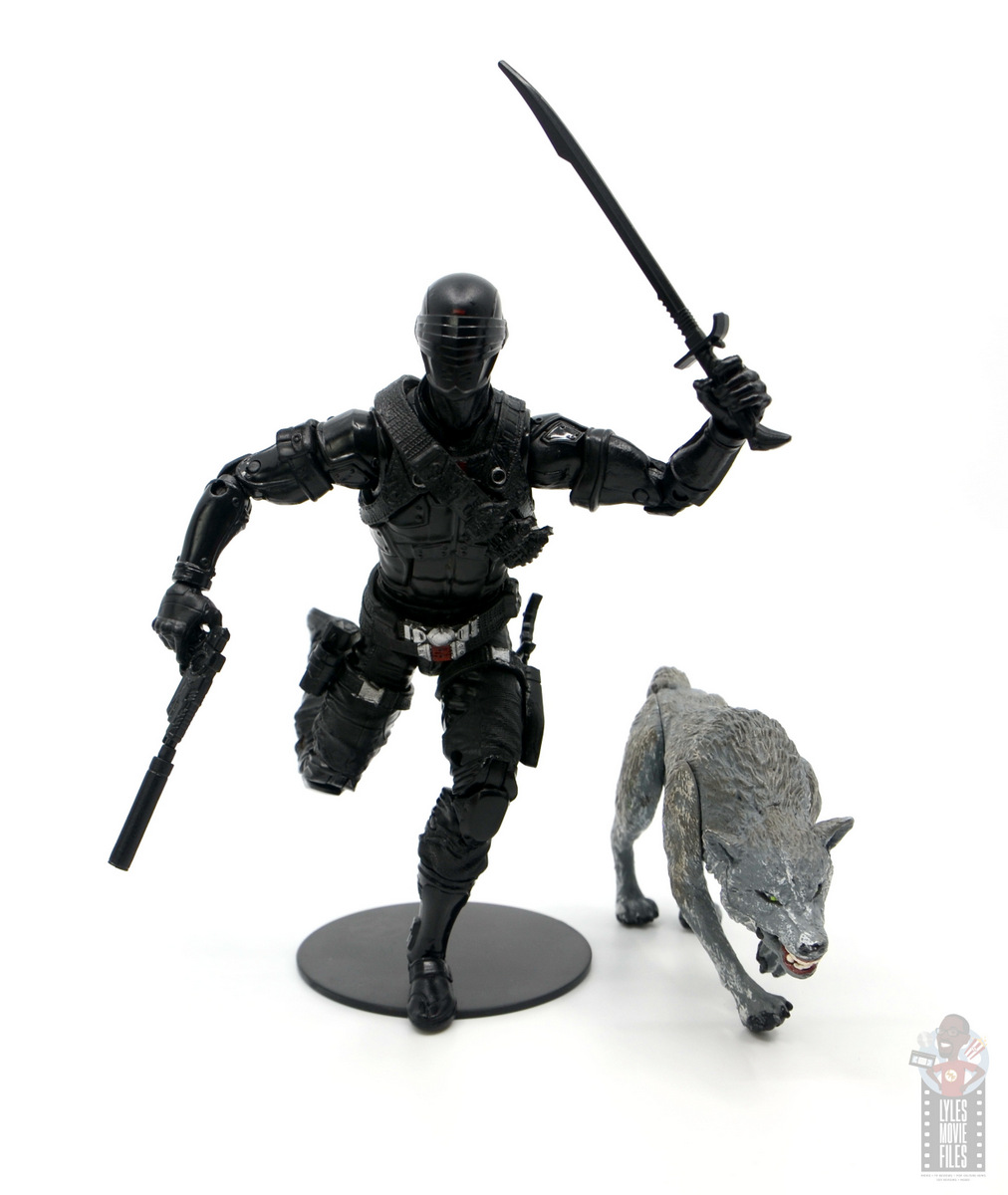 Hasbro nailed this one too. If this is the quality of very figure in this line it’s going to overtake Marvel Legends by this time next year (if not sooner) as my favorite line to collect. 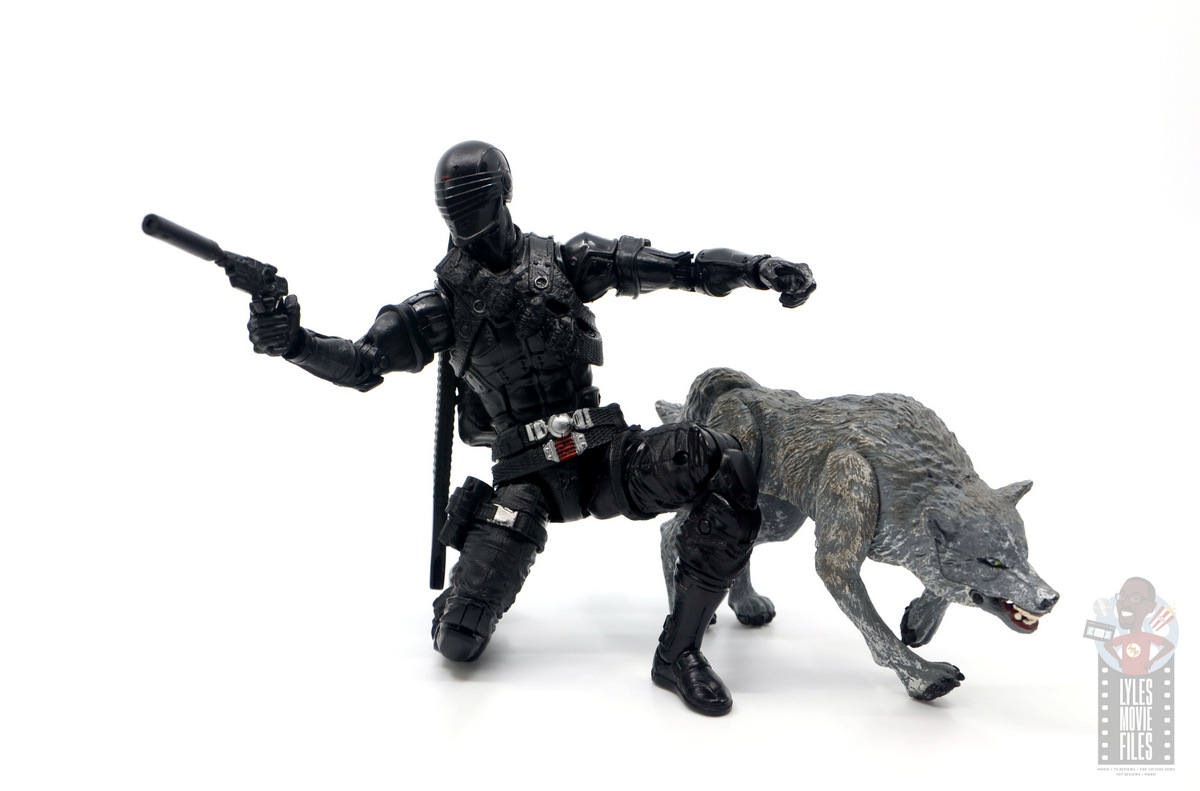 Where to Get It? Retail is slowly starting to get the Classified Series in stock. Snake Eyes is available on Amazon and Entertainment Earth.