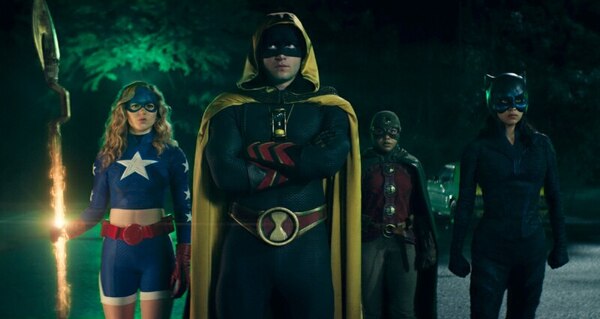 The Justice Society was easily my favorite episode of Stargirl so far. If the showrunners really felt the Junior JSA take was the best way to go, this episode approached it in the most logical and sensible manner.

Pat doesn’t want to hear any of Courtney’s excuses and wants her to retrieve Wildcat and Dr. Mid-Nite’s costumes. He’s going to get Hourman’s hourglass from his son Rick himself. Despite her bravado and dismissive attitude at times, Courtney knows Pat has been exceptionally cool as far as stepfathers go and him thinking she disrespects him stings enough that she tries to honor his wishes.

But you can’t exactly give loners and outcasts cool abilities and expect to be able to take them back. Yolanda and Beth don’t care about Courtney’s guilty conscious and refuse (nicely) not to give up their gear. 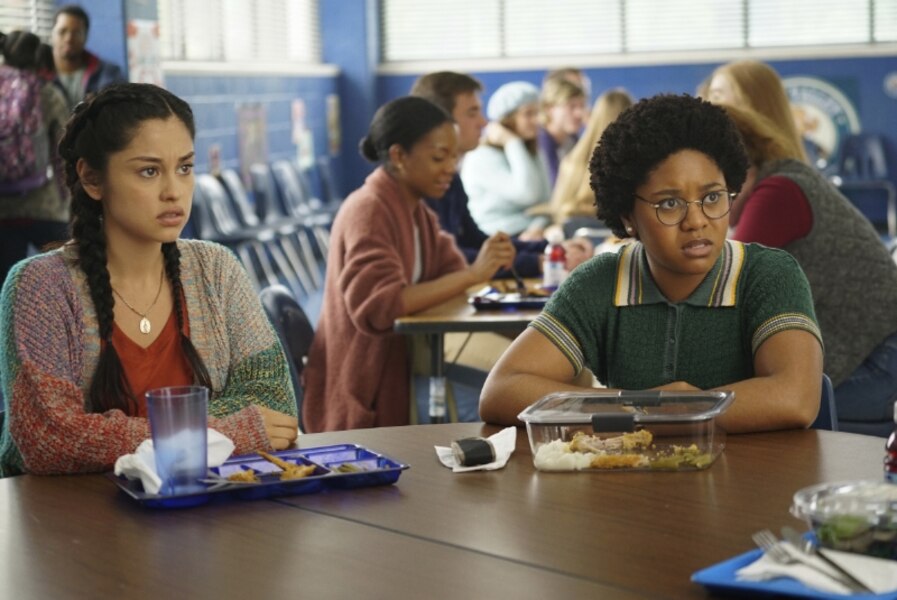 One of the main themes of Geoff Johns’ lengthy run on Justice Society was legacy and the carrying on the tradition from an older hero to the new generation. Stargirl’s you get a costume, you get a costume approach didn’t allow for that natural evolution of the new heroes stepping up although this episode tried to close that gap. Yolanda watched old footage of Ted Grant and was fascinated with his past while Beth has a closer bond with Dr. Mid-Nite’s AI facsimile she names Chuck.

Typically the non-hero scenes can be a drag in these series, but I really liked the Mike and Barb bonding over his science fair project. Stargirl features a blended family yet shows that doesn’t have to dwell in the cliche and the stepfather/stepmother can actually have a good relationship with their stepchildren. Especially when some parents in the show can be outright psycho. 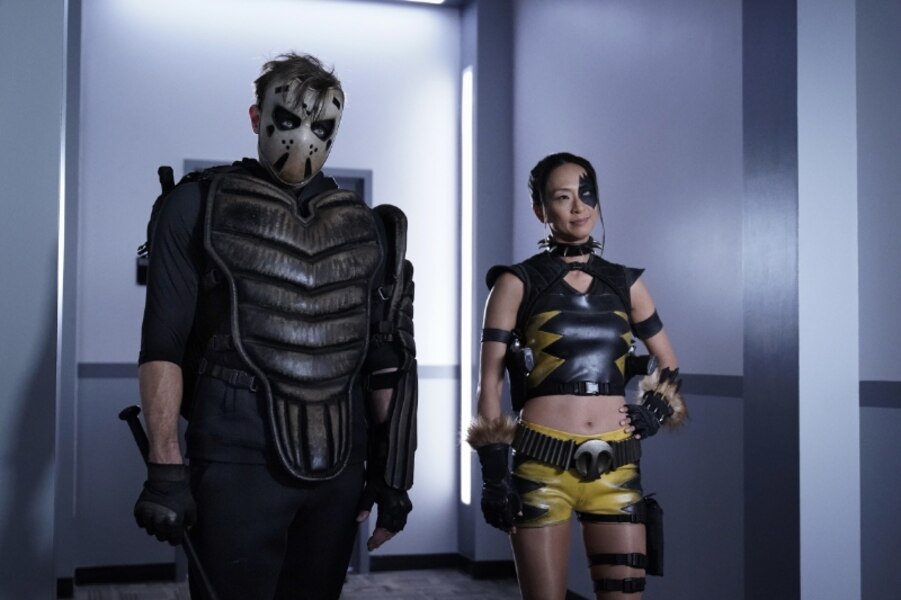 Sportsmaster (Neil Hopkins) and Tigress (Joy Osmanski) get called into action to work out their aggression in a more productive fashion than killing coaches who dare discipline their daughter, Artemis (Stella Smith). I’m still not sure which direction the series is going to go with the children of the Injustice Society. There’s Artemis, Brainwave Jr., Cindy and Icicle Jr. Will all of them follow in their parents’ footsteps or will some oppose them? That would definitely help flesh out the JSA ranks…

Beth learns The Gambler is hacking into a network giving Rick and Yolanda a perfect low level boss to begin their crusade against the ISA. Courtney’s hesitant, but wants to be a good friend and goes along. Just like Black Lightning, I question the decision to immediately add sidekicks to the lead characters show. It really does feel like a missed opportunity for Courtney to tried to prove her worth and join the older JSA instead of having them all be her peers that almost immediately need significant character development as well.

And yes, I’m going to say it again these costume designs are incredible.

While they think they’re going after The Gambler, they neophyte JSA instead has to tangle with Sportsmaster and Tigress. Sportsmaster was a character that didn’t really get his due until Young Justice. Stargirl does right by him as well and shows how dangerous a villain with a sports motif could be considering his deadly aim and skill. I loved how the cast played their roles here. Sportsmaster and Tigress switch between seemingly a little off trying to play suburbanites barely able to contain their murderlust while Beth can’t help but be adorably out of place next to the brooding Hourman.

Fittingly, Stargirl and company got their tails kicked until Pat arrived as STRIPE for the save. You’ve got to appreciate Stargirl for showing a steep learning curve in becoming a superhero. Courtney and her friends may have some natural talent, but their inexperience cost them big here.

Yes, some of the fight scenes felt a little wire-fu clunky, but that had more to do with their overly ambitious nature. This wasn’t the typical everyone stays firmly planted on the ground TV comic book fight. Director Christopher Manley really tried to bring more of the flair of an actual comic book fight where the characters use their unique abilities to aid in combat. This felt like a TV show venturing into movie level action quality. 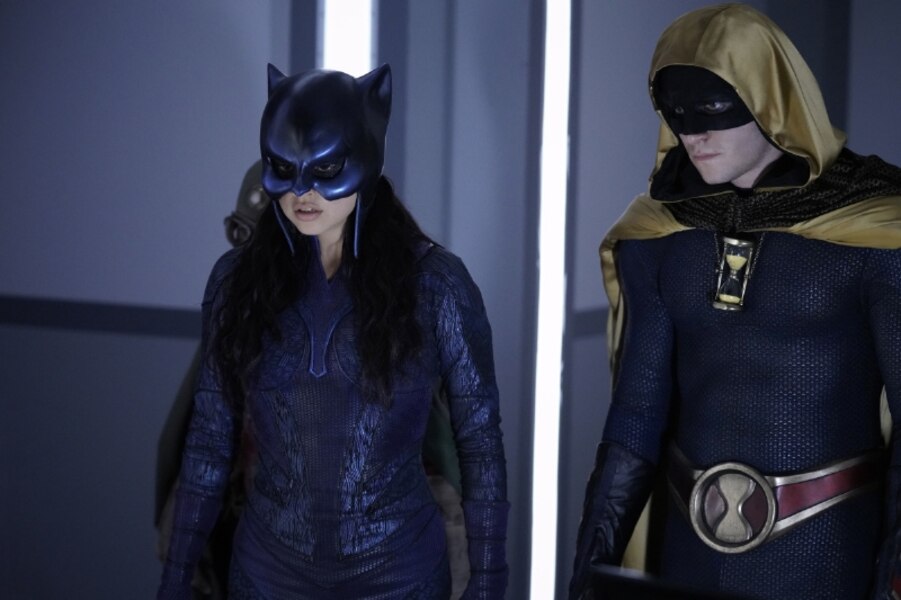 In the end, Courtney took a huge slice of humble pie as she finally understood where Pat was coming from in wanting to keep her safe. Pat also made a logical compromise instead of being the bad guy who takes away these outsiders’ hope by saying they need training. I still think the team would benefit from an older hero or two to help Pat train them (a la Wildcat, Flash and Green Lantern) in the comics. It’s a shame the Arrowverse ruined Mr. Terrific as he would be an ideal older, yet inexperienced hero to add to the JSA who would also be budget friendly.

After yet another encounter with Stargirl and her crew, Icicle decides now his Injustice Society needs to learn more about this new JSA.

Yeah, everything about this episode was strong from the action to the quieter, character building moments showing how bright Stargirl can truly shine.