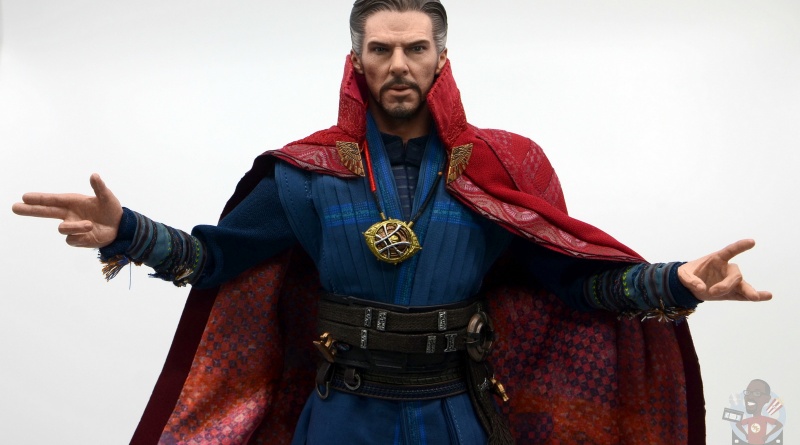 Doctor Strange was one of my favorite characters in Avengers: Infinity War. As much as I enjoyed his first film, it was a lot of fun seeing him interact with characters like Iron Man, Spider-Man and Star-Lord and Benedict Cumberbatch did an amazing job easily establishing himself as a key member of the Marvel Cinematic Universe in only two films.

I was torn if I should review Thanos first or build up the armada to battle him, which definitely means I needed to knock out Doctor Strange. Enough build up, let’s see if the Hot Toys Avengers: Infinity War Doctor Strange figure is magical or needs to go back to residency.

Packaging:  Doctor Strange has one of the heavier packages so you know immediately he’s packed with a ton of accessories. I love the colorful packaging with bright oranges, reds and blues as well as the gold foil embossed Infinity War logo.

Remove the main sleeve and you’ll get to the main box with a Doctor Strange logo on the side. There are three layers of the packaging. The first contains the hands and hand accessories.

Next is the figure itself with some of his larger accessories and instructions. The next layer is the cape and stand. Finally there’s the backdrop piece. Like I said, there’s a lot here and almost to the point of being overwhelming.

Likeness:  The main reason I didn’t buy the standalone Doctor Strange figure is because I thought the Cumberbatch likeness was off.  There was something off with the hair sculpt. This time the sculpt is a far sharper likeness to Cumberbatch especially with the focused expression that makes sense considering with everything Strange was dealing with in Infinity War. 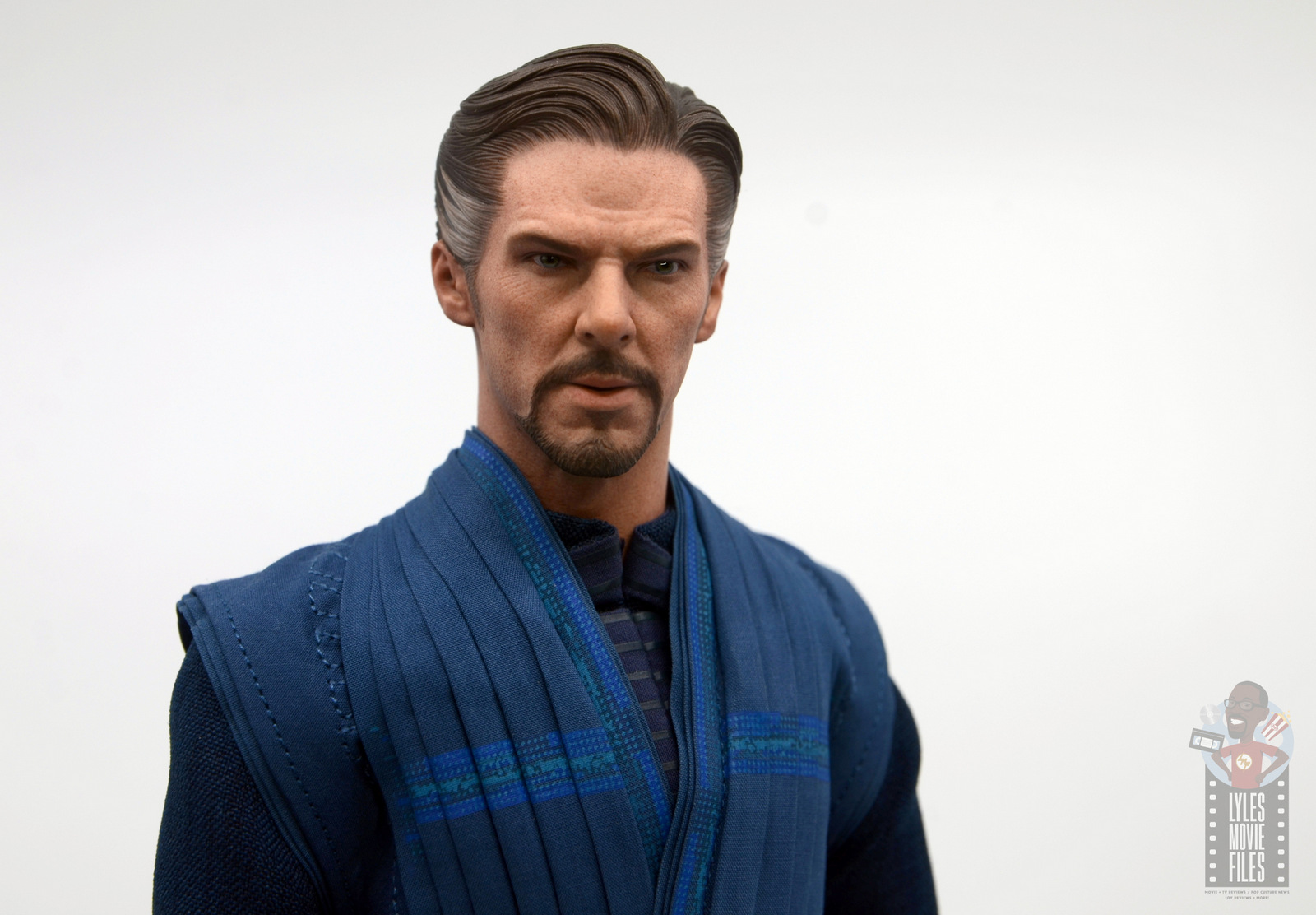 This is one of the better likenesses Hot Toys has done and is a real standout.

Outfit:  Again, the figure has a slew of layers. First up is the tunic, which features some pleated elements. 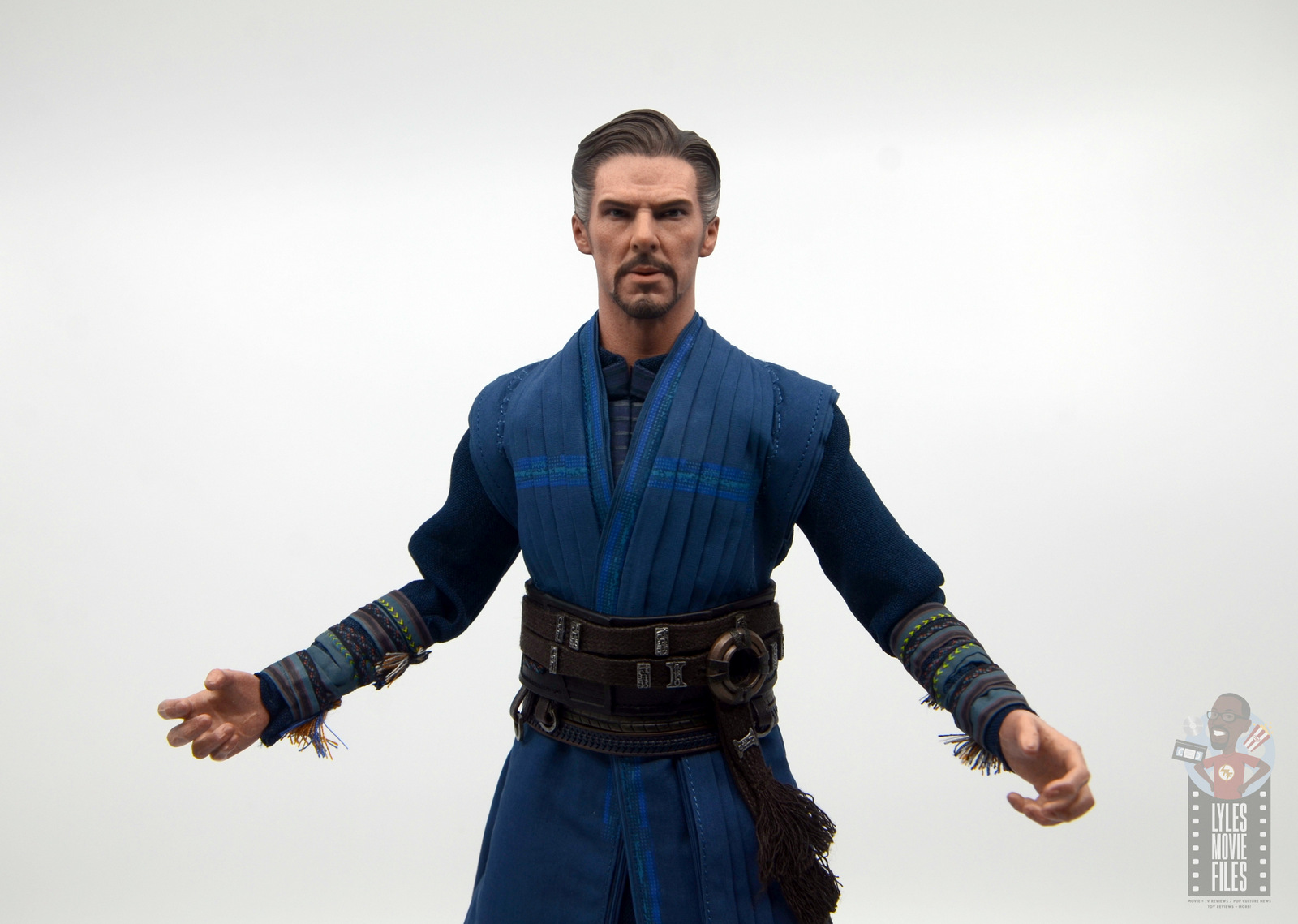 The bottom portion of the robes is tailored, but they are separate pieces to offer a more realistic look. 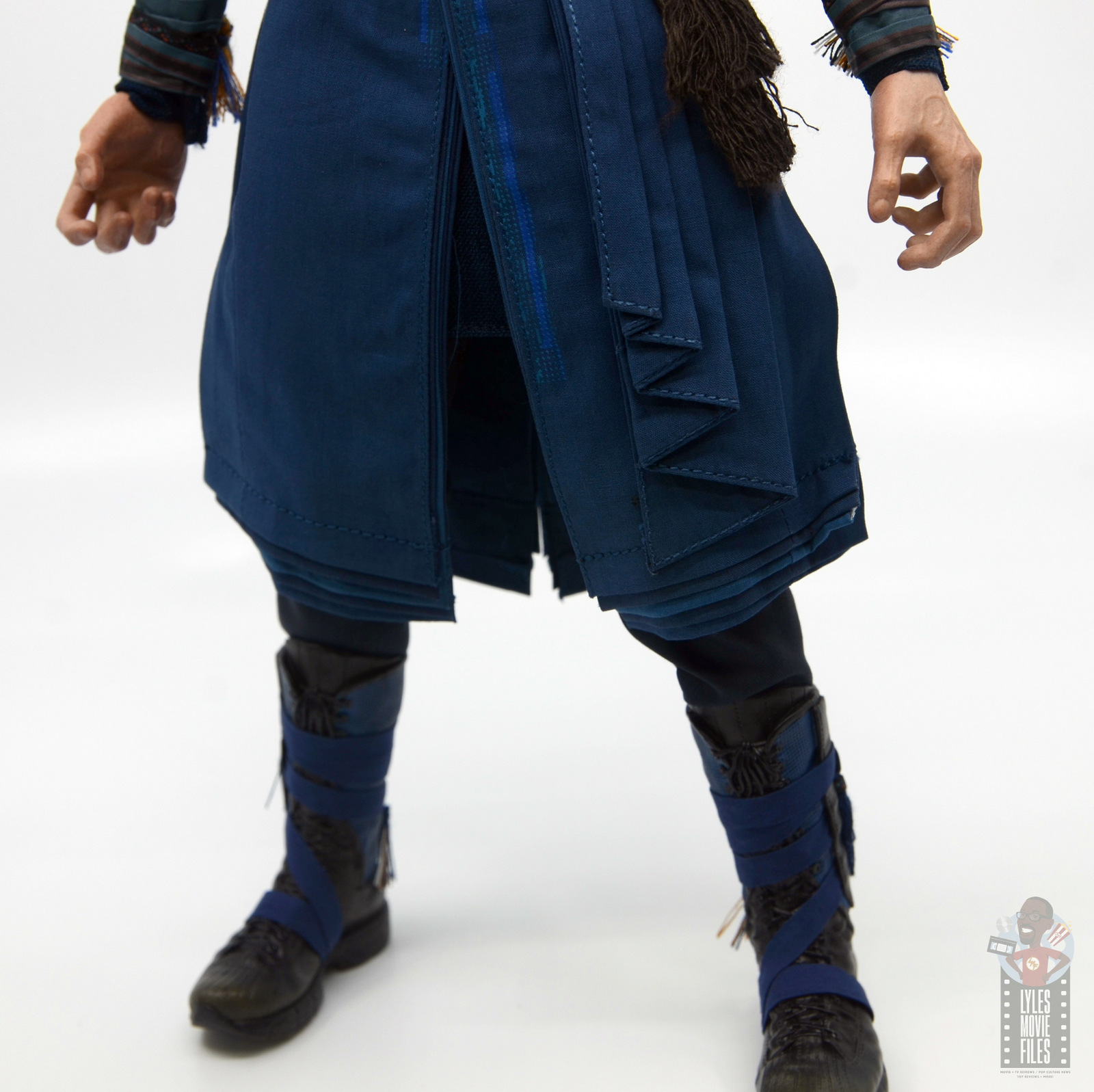 The cummerbund is comprised of three different straps — a brown leather material with silver studs, a black leather like material with a different arrangement on the silver straps and a final strap with more ornate pattern and loops. 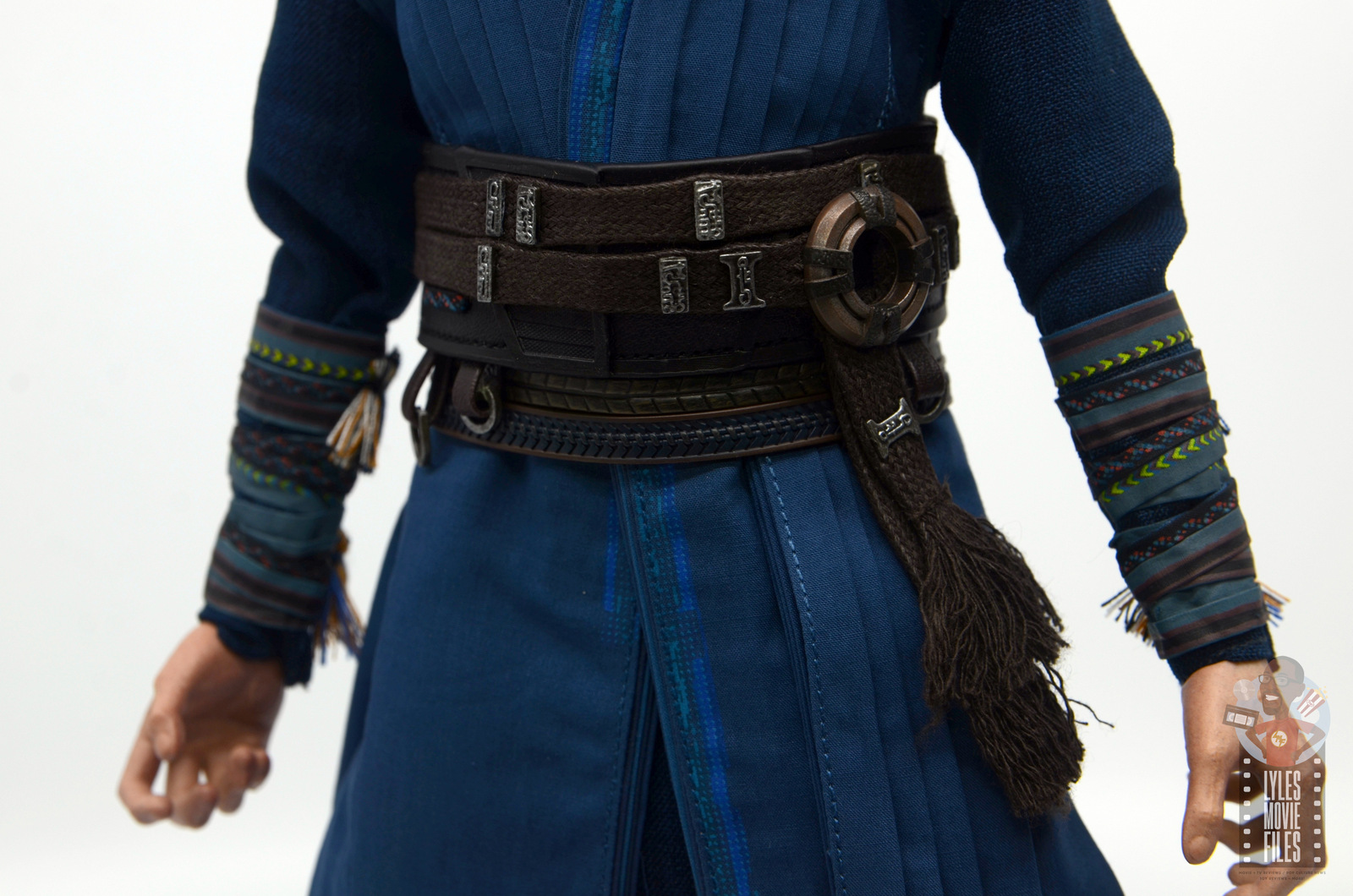 This distinct look carries through to the gauntlets as they’re made up of various materials with incredible detail you have to see to really appreciate. 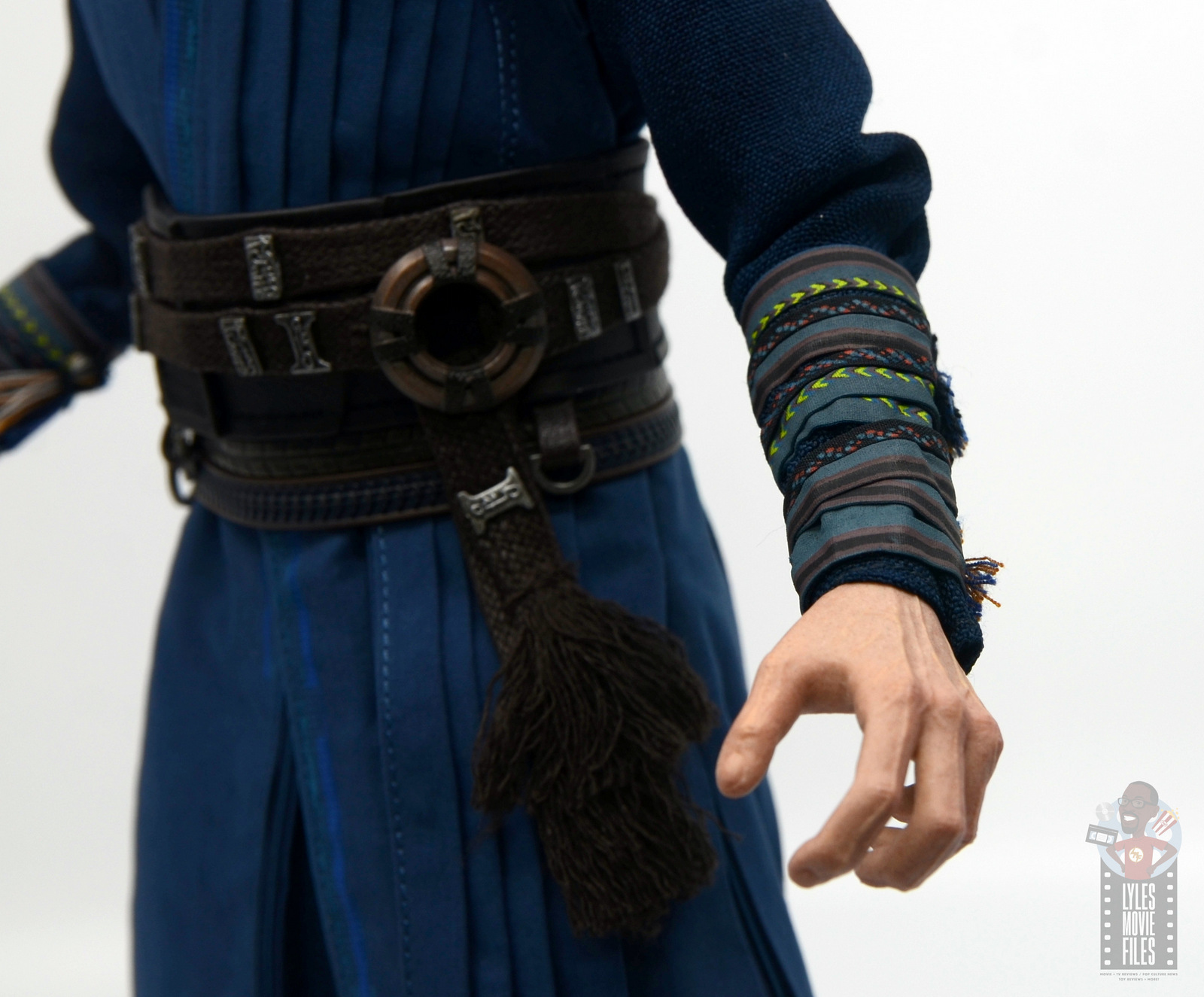 Strange’s boots also are very intricate with a lot of layers and straps. I really dig how much work Hot Toys put into laying this figure out and not shortchanging on any area. 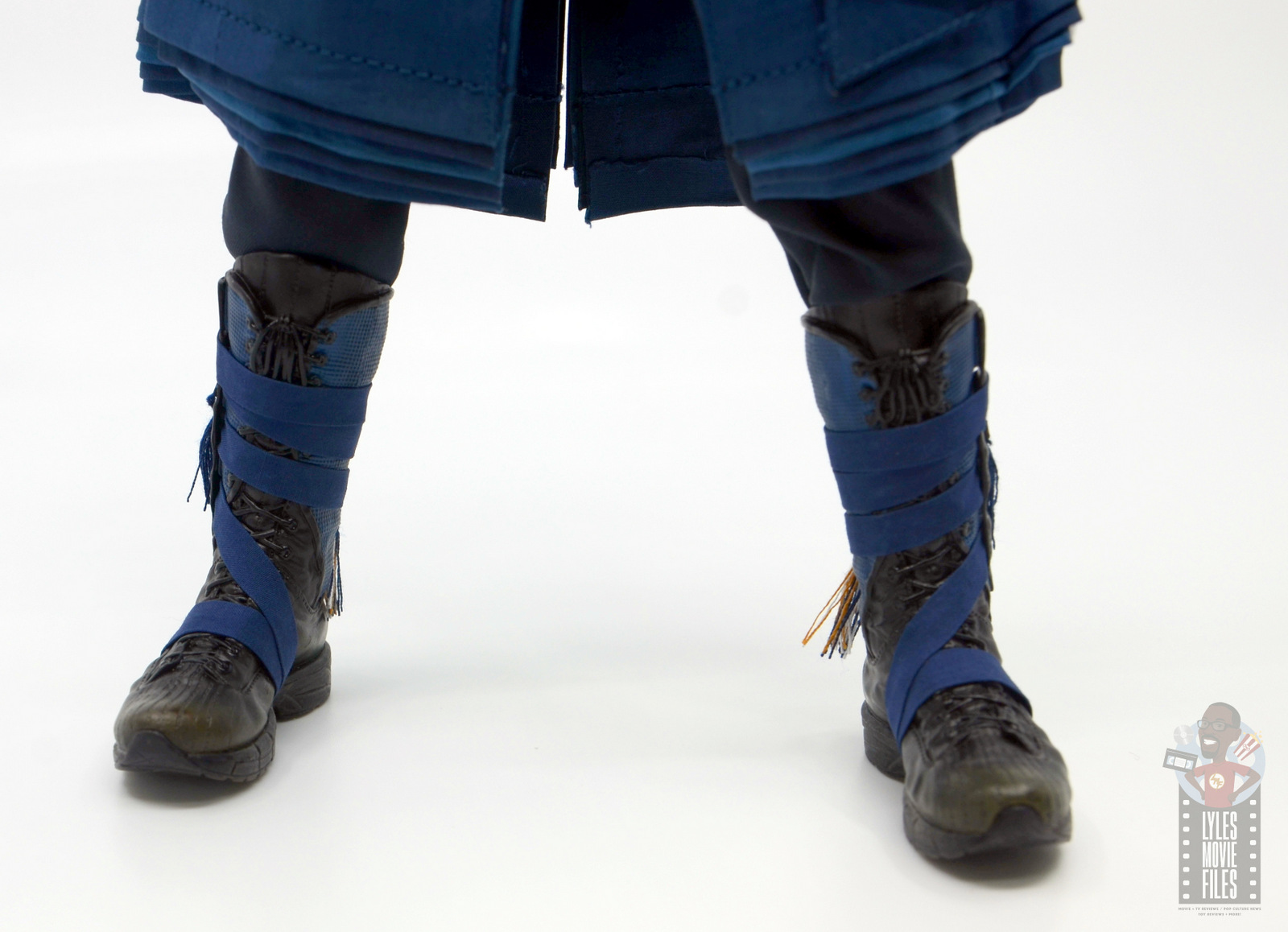 The cloak has an odd bubble on the left shoulder that’s used to help maintain its form although it’s a little awkward to get used to initially. 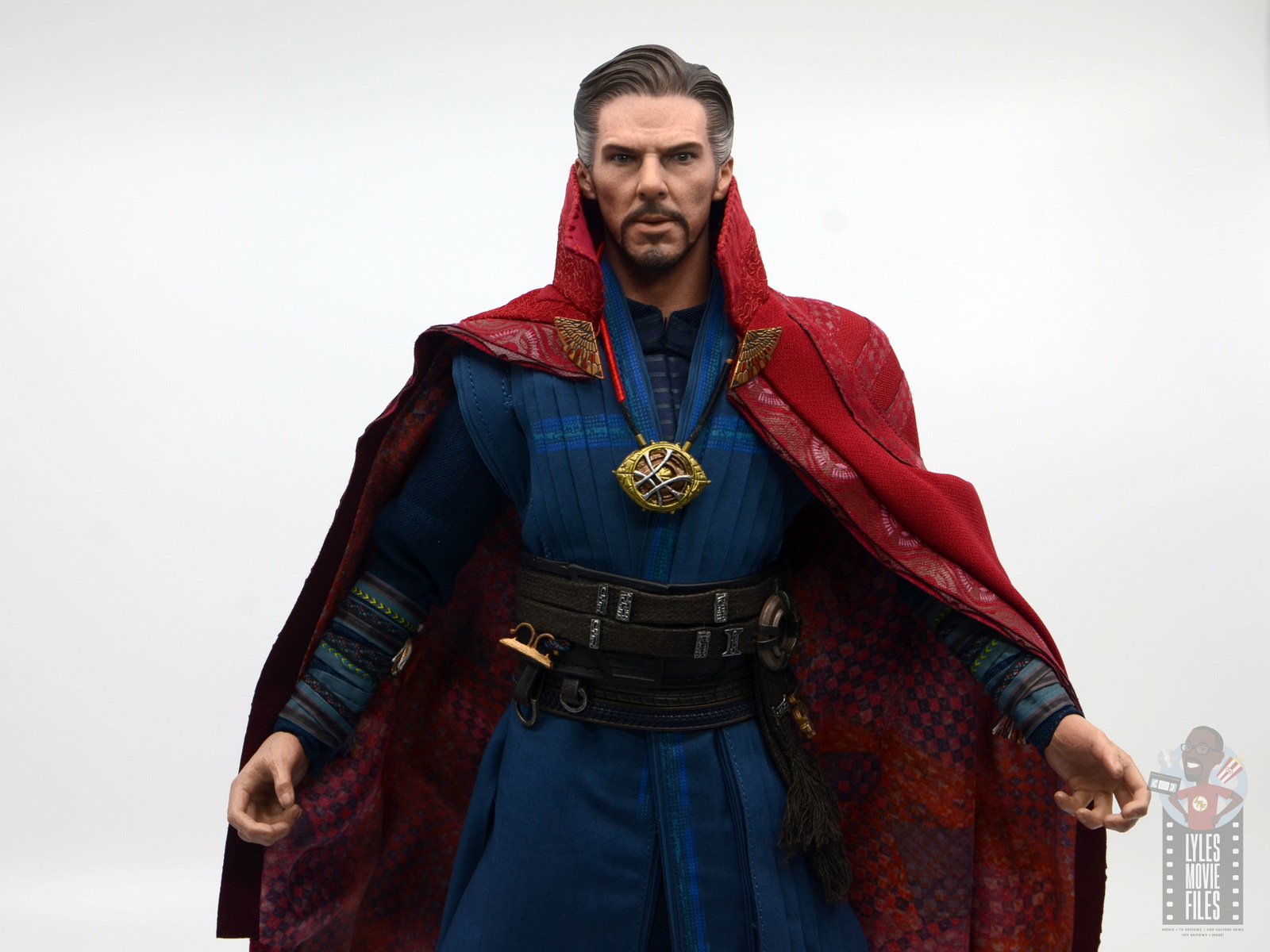 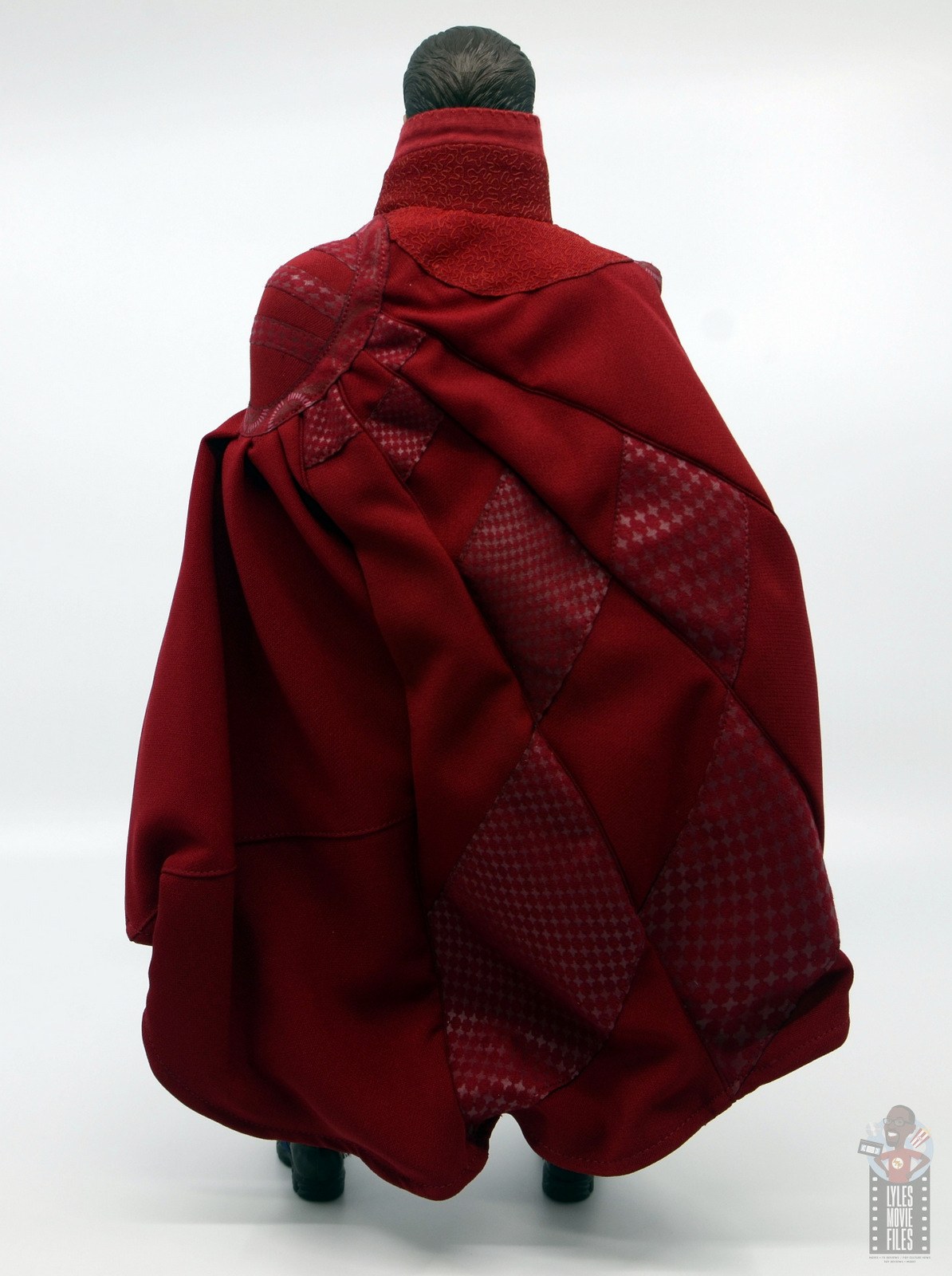 Like the rest of the outfit, it’s got a tremendous amount of detailing and patterns. 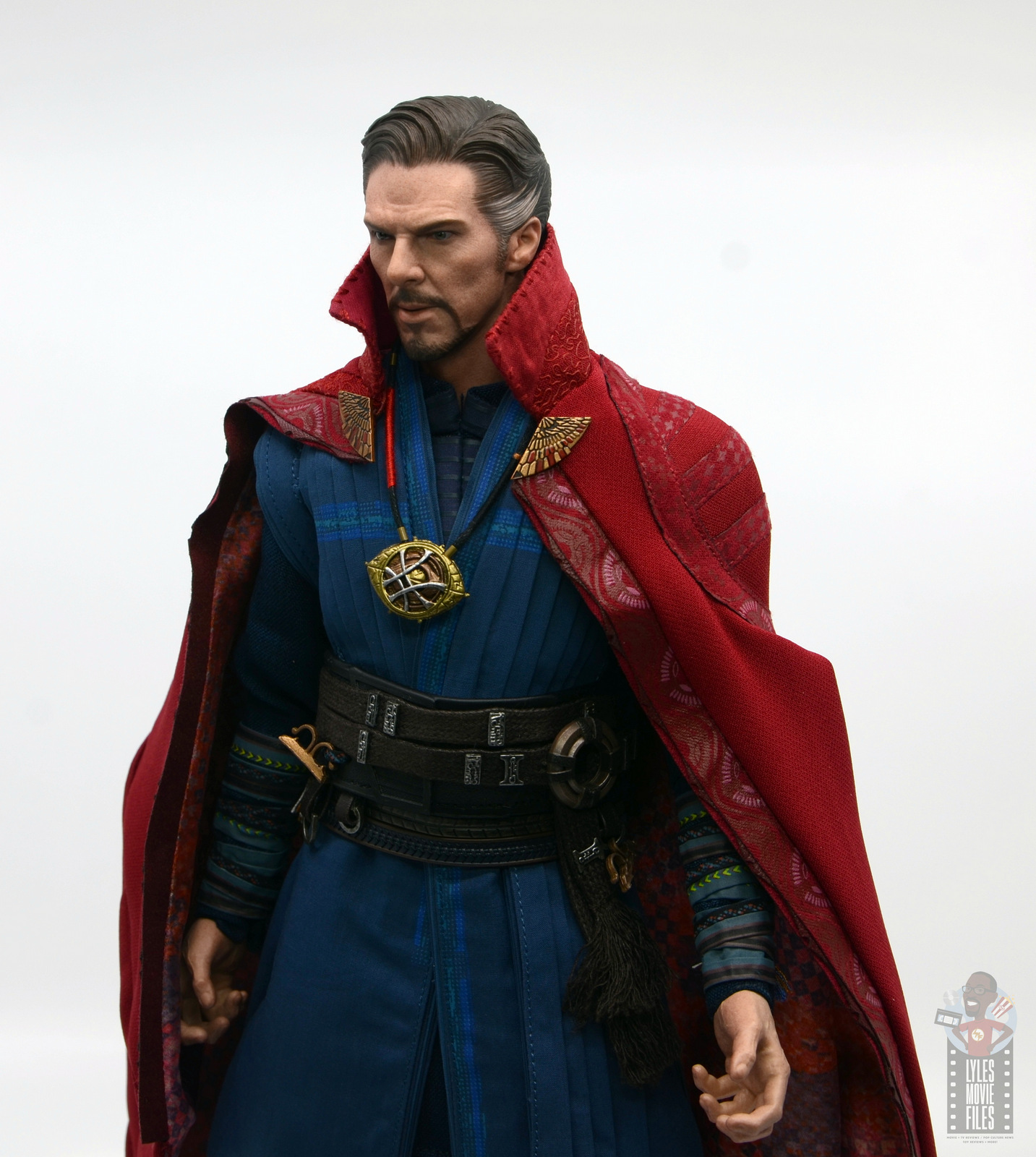 Scale:  Doctor Strange stood about eye to eye with Tony Stark even when he was armored up. 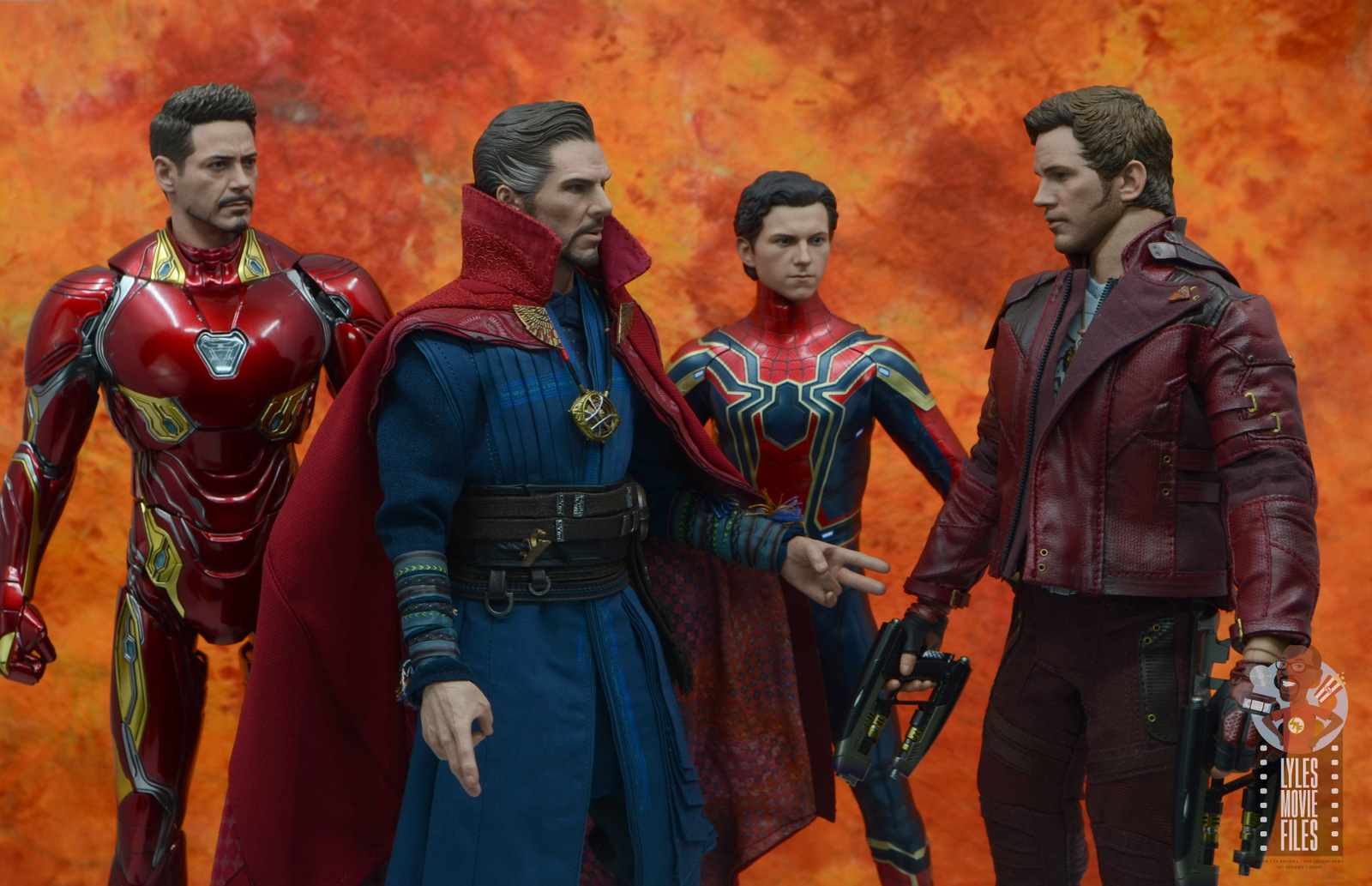 Hot Toys tends to make the armored characters a little taller than they appear in the films however so it wasn’t a surprise when he came up a little short. He is taller than Spider-Man like he should be however. 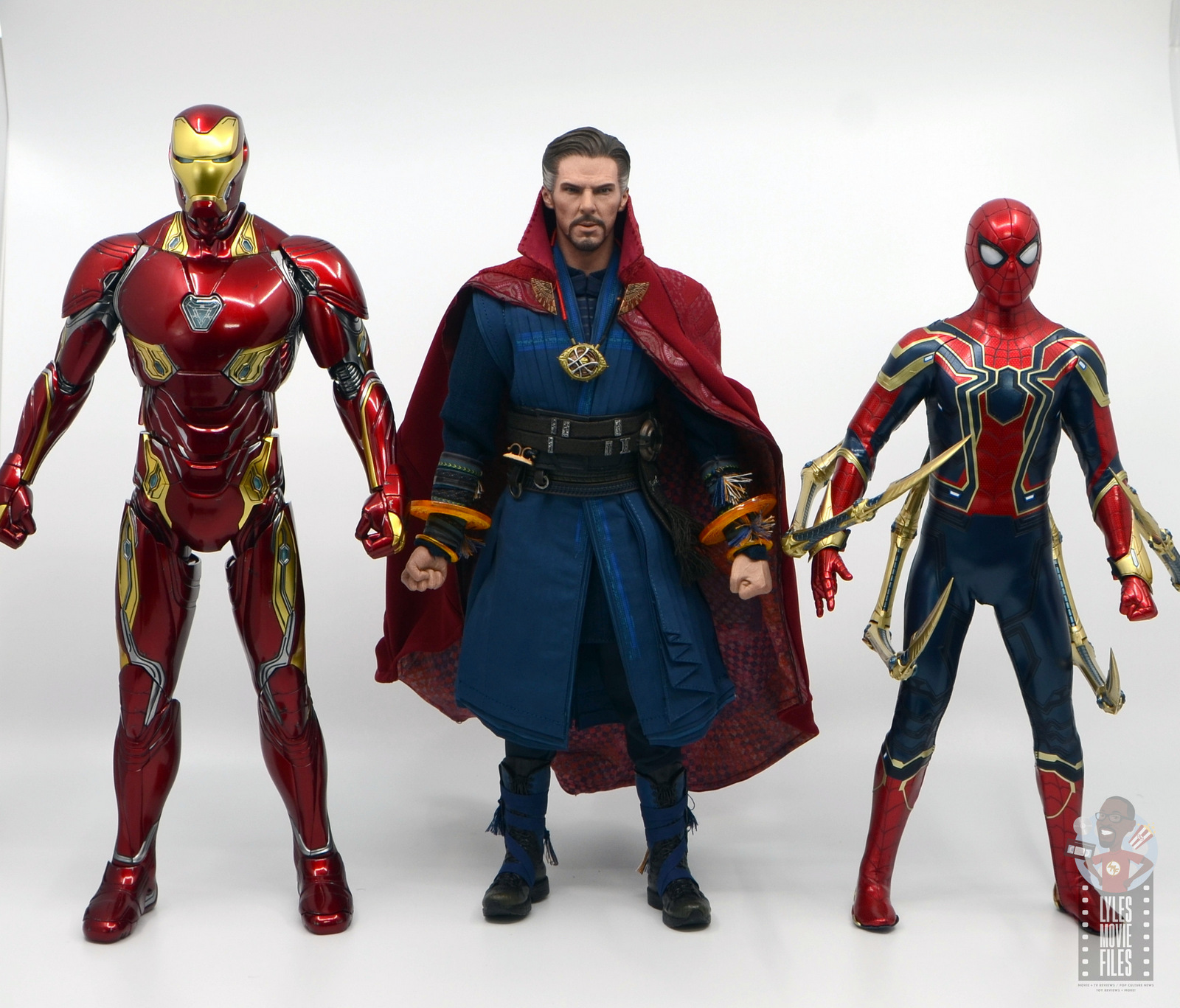 Paint:  There’s not a ton of paint focus outside of the head sculpt, but it looks incredibly lifelike. That’s what you’d expect from a Hot Toys figure and it’s exceptional. I really like the work on the graying temples. 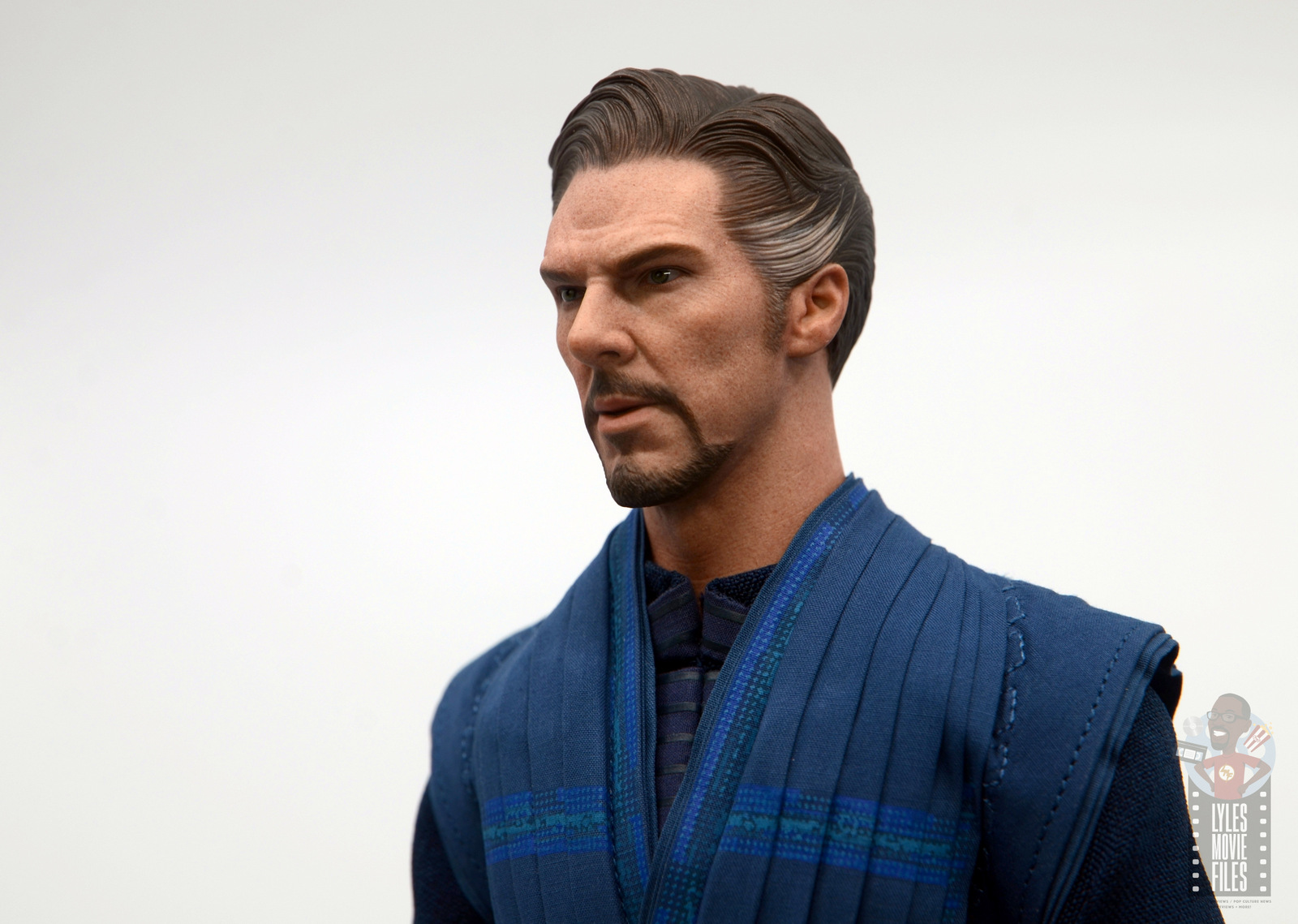 Articulation:  For a Hot Toys figure, Doctor Strange moves really well. That’s largely due to the outfit, which is looser than normal. I was impressed that I could get the cross legged meditation pose with little trouble. 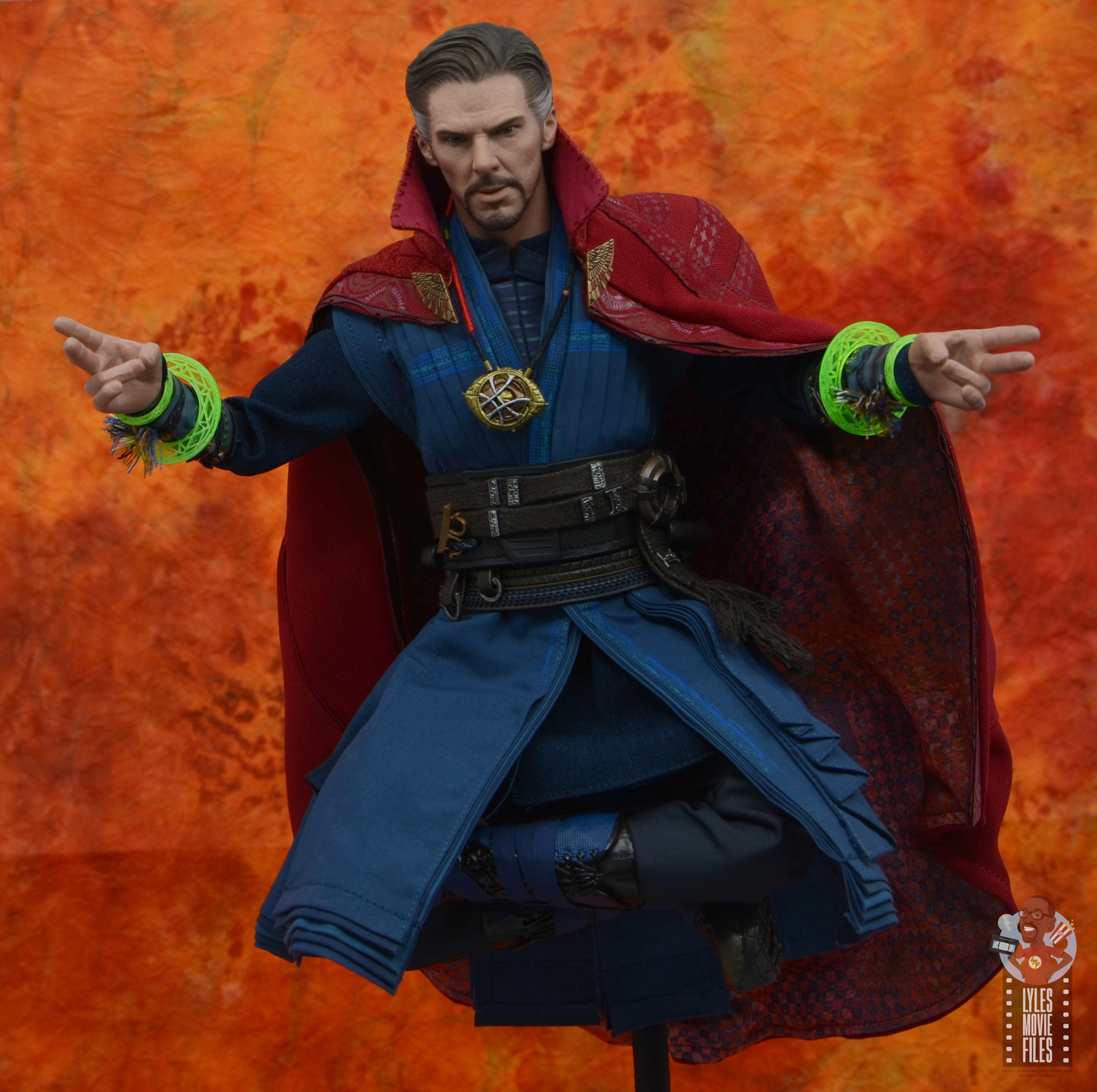 I wish the arms had a bit more up and down range for higher spell posing. Strange’s cloak on the left shoulder is lower and limits some of that articulation as well. 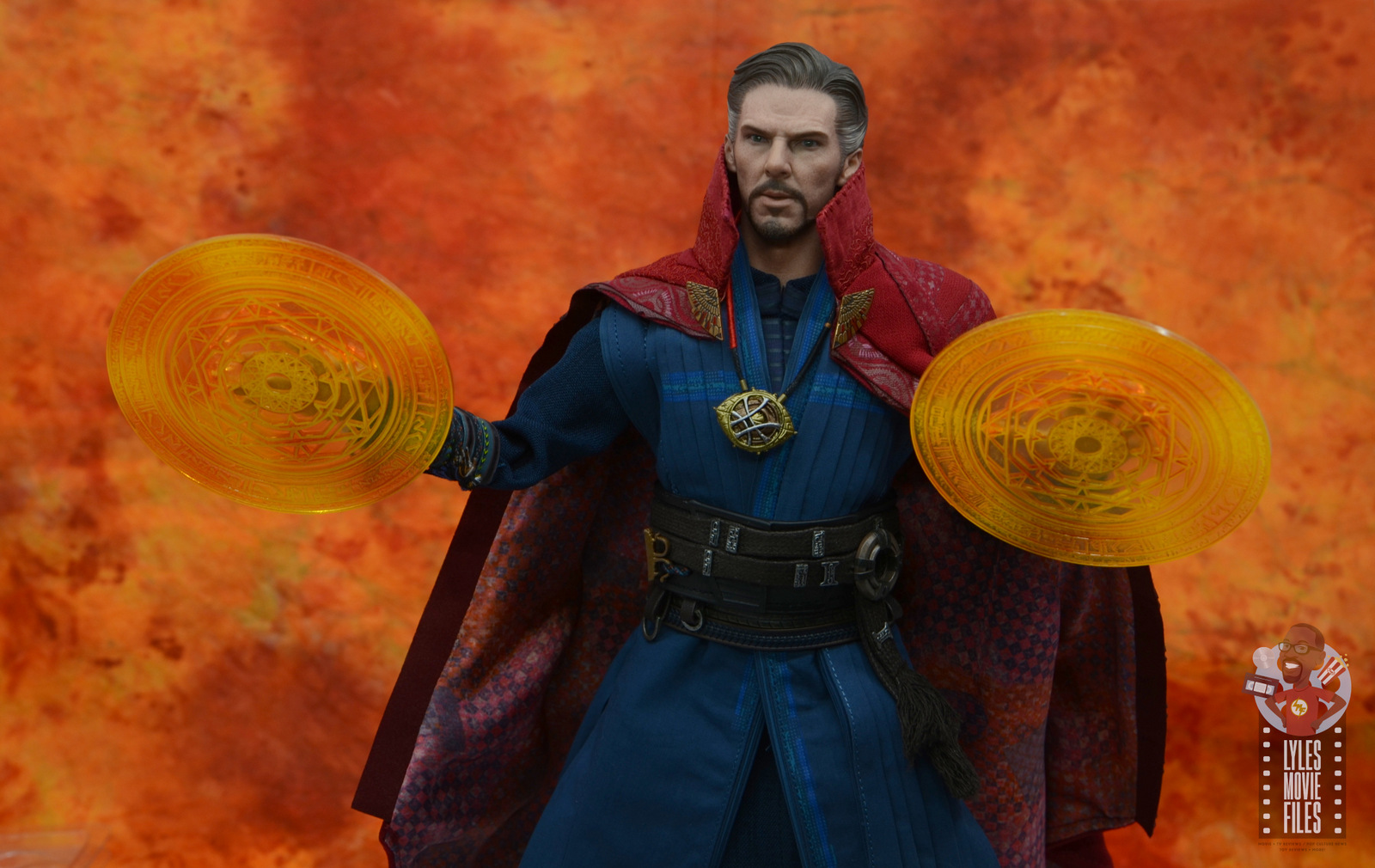 It also would have been nice for the boots to be sectional instead of the standard one piece as it prevents deeper ankle pivot poses. 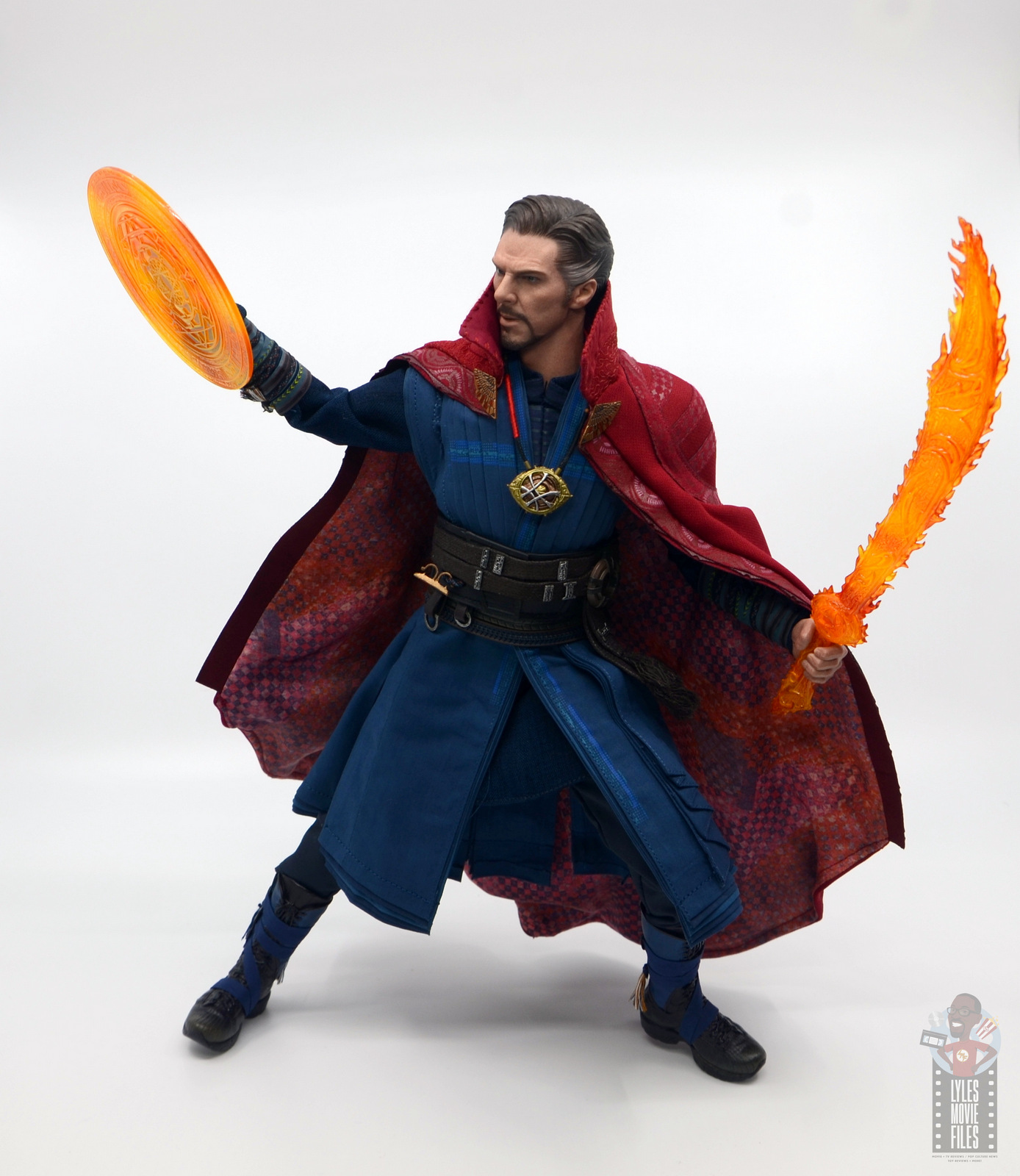 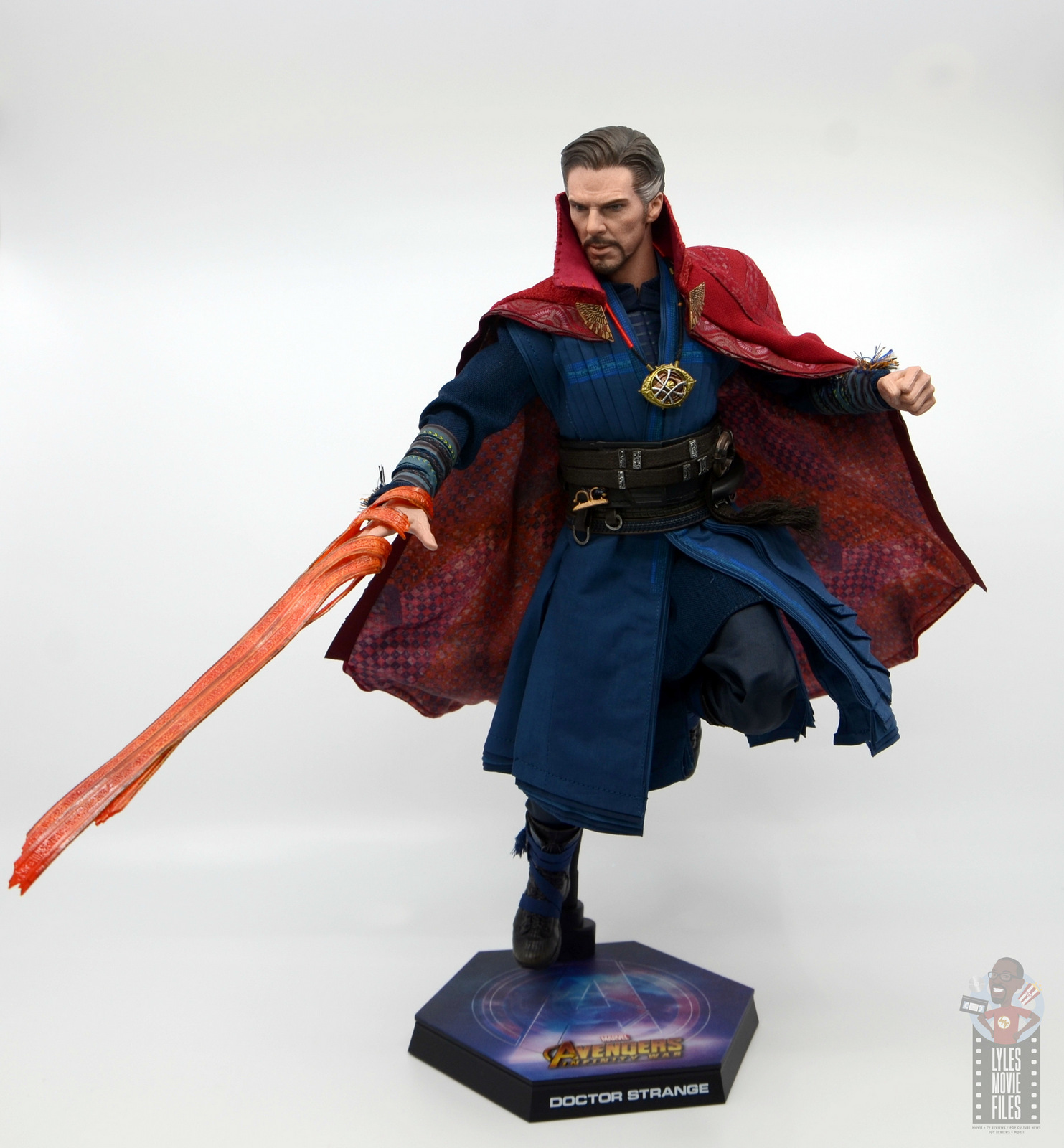 Accessories:  May as well grab a seat for this one. Strange has an extensive arsenal for a magician.

As always, check the directions before messing around with too much. 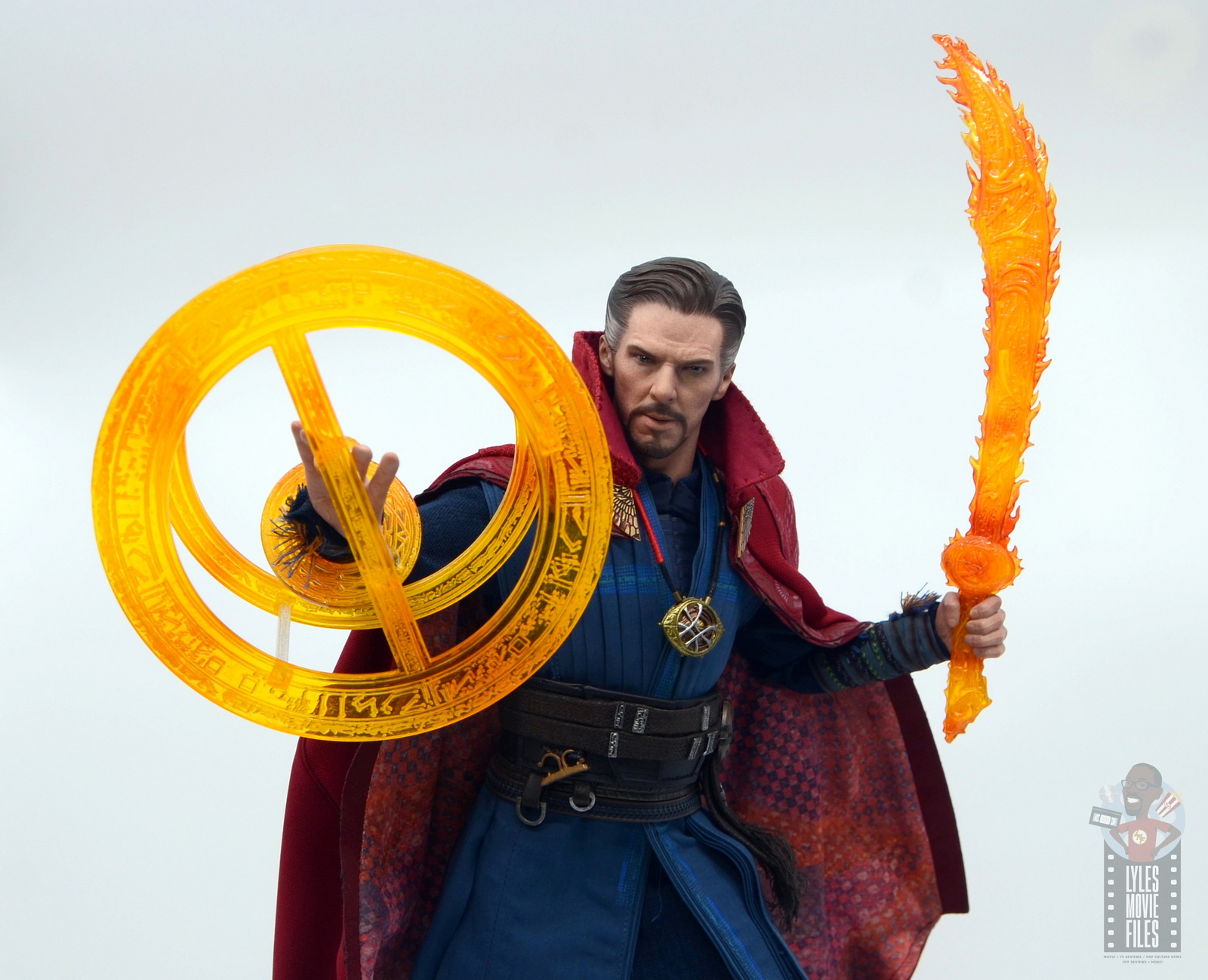 Doctor Strange also has two sling rings and two versions of The Eye of Agamotto — one open and one closed.

The sling rings are made of a very soft plastic. You’ll need to loop them through the holes and then make sure to tab the knob so it locks in. If you don’t those ring slings will fly off with the barest bit of movement and they’re easy to miss. 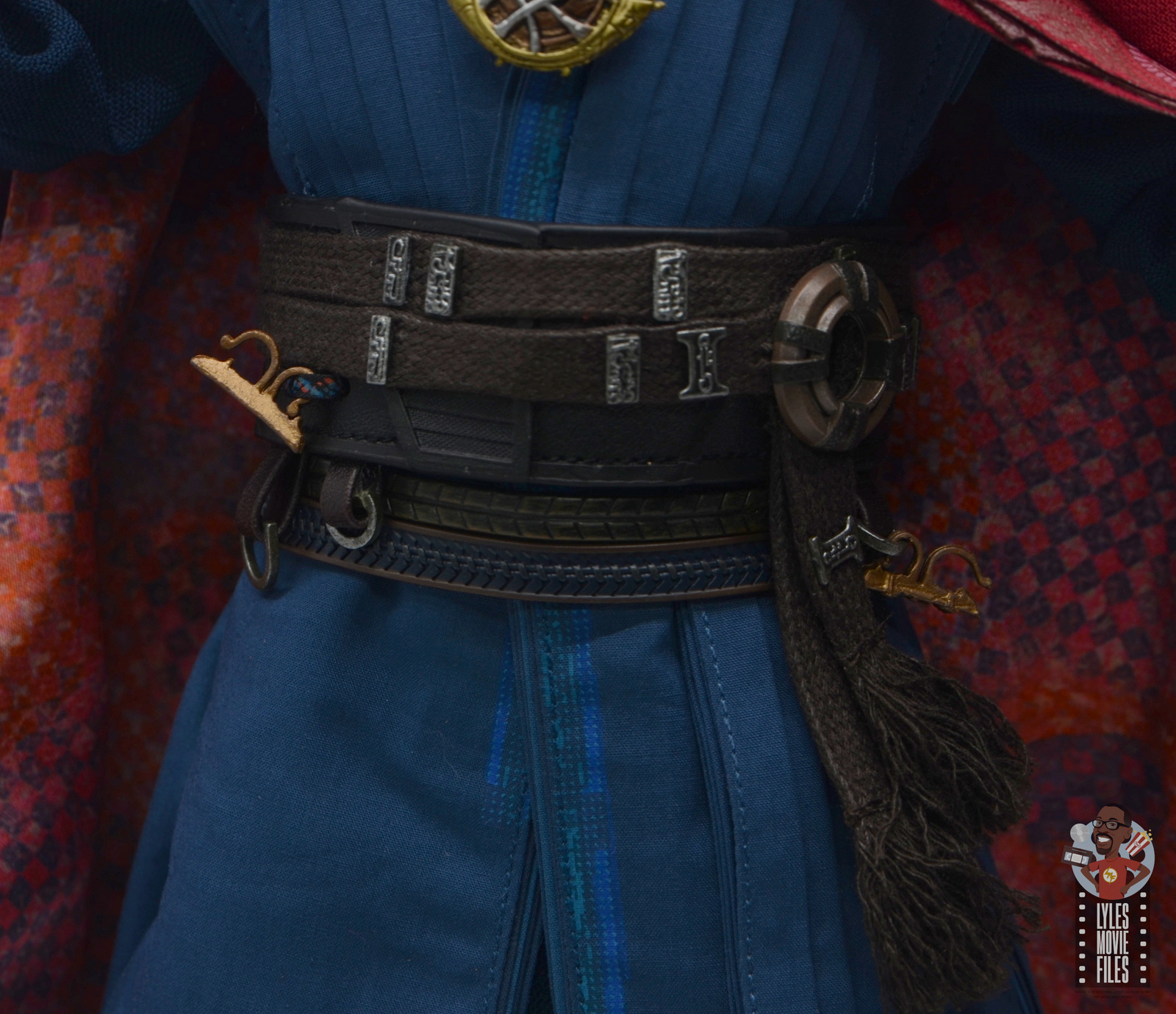 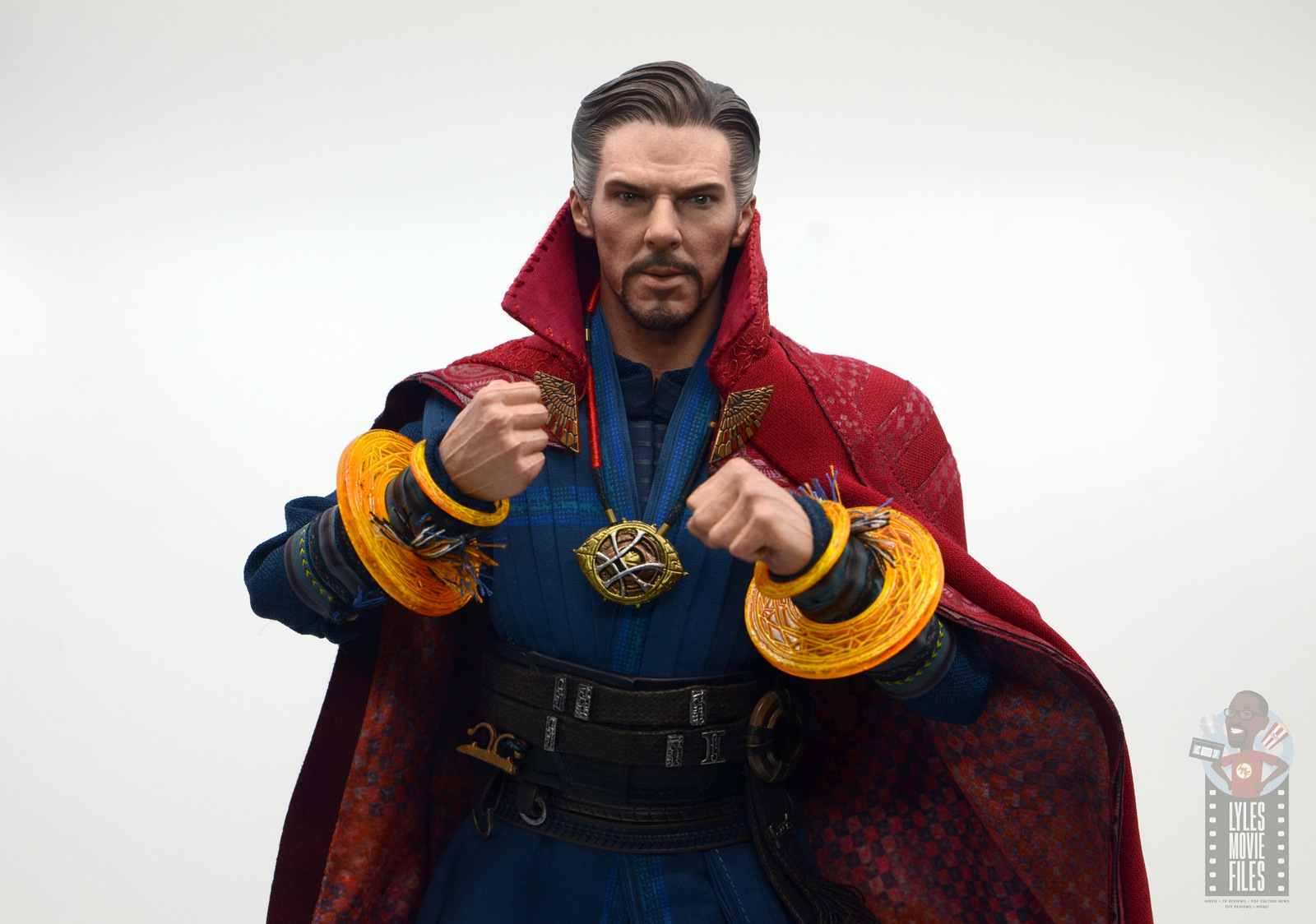 This spotlights the figure’s biggest challenge/issue — swapping out the hands. 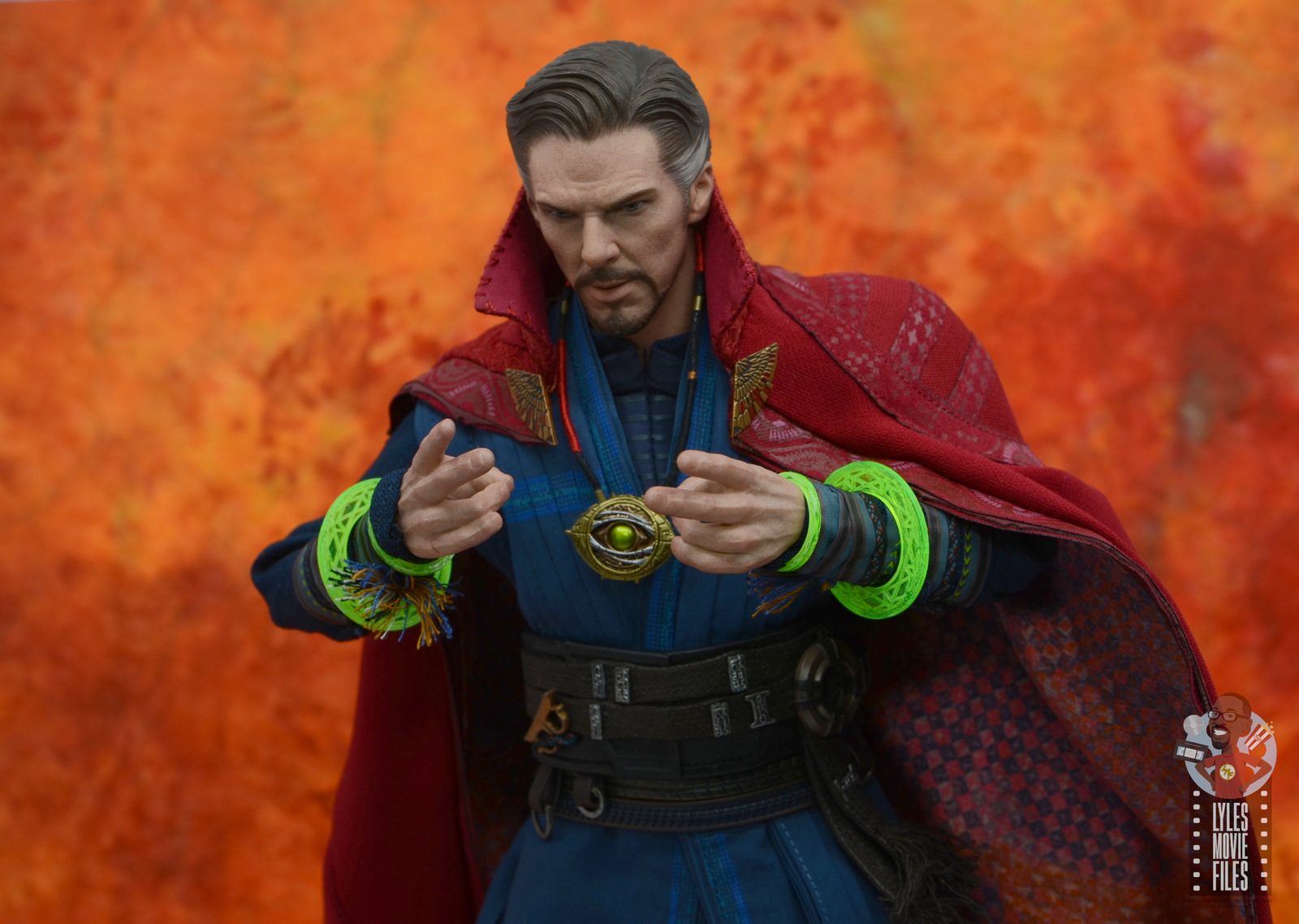 The sleeves have a ton of material that doesn’t always push up to allow for enough room to push the hands in. And then even when you are able to get the hand in if it’s not firmly in place the fabric will help push it off. This becomes a very frustrating problem. It’s much easier when the wrist ball joint pops out allowing you to get a snug fit. 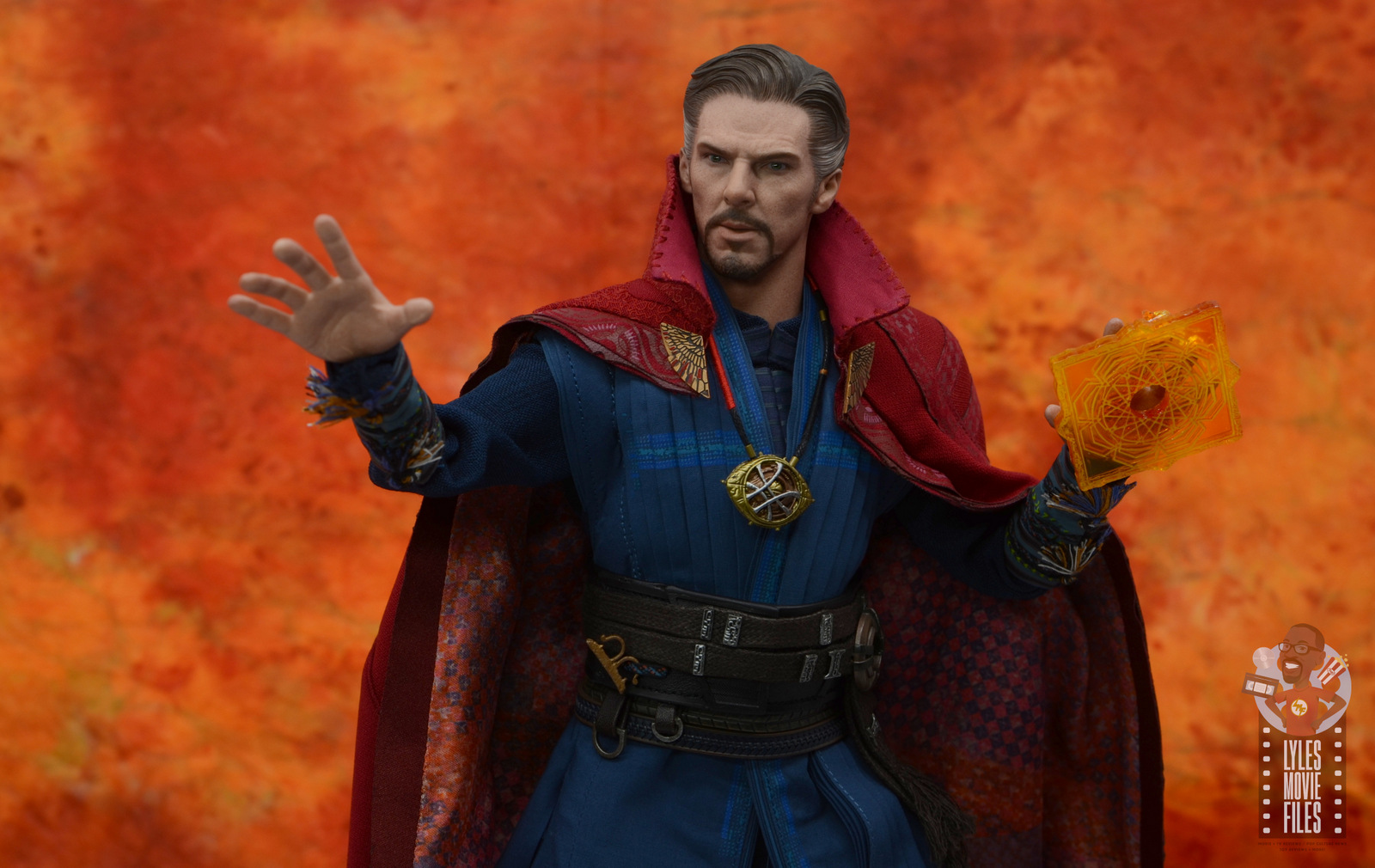 The actual effect pieces do fit into the outstretched hand well and don’t fall off too easily. 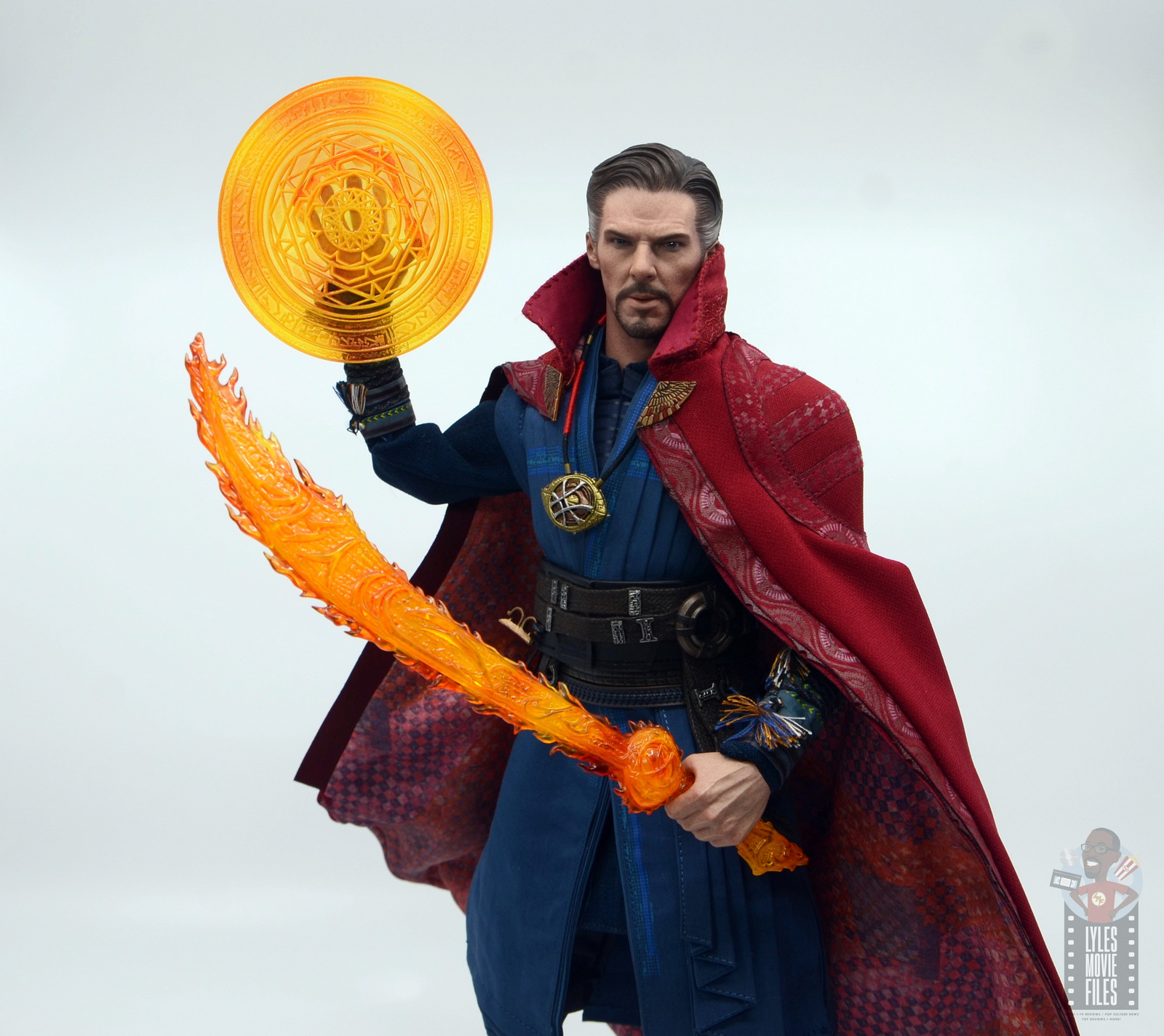 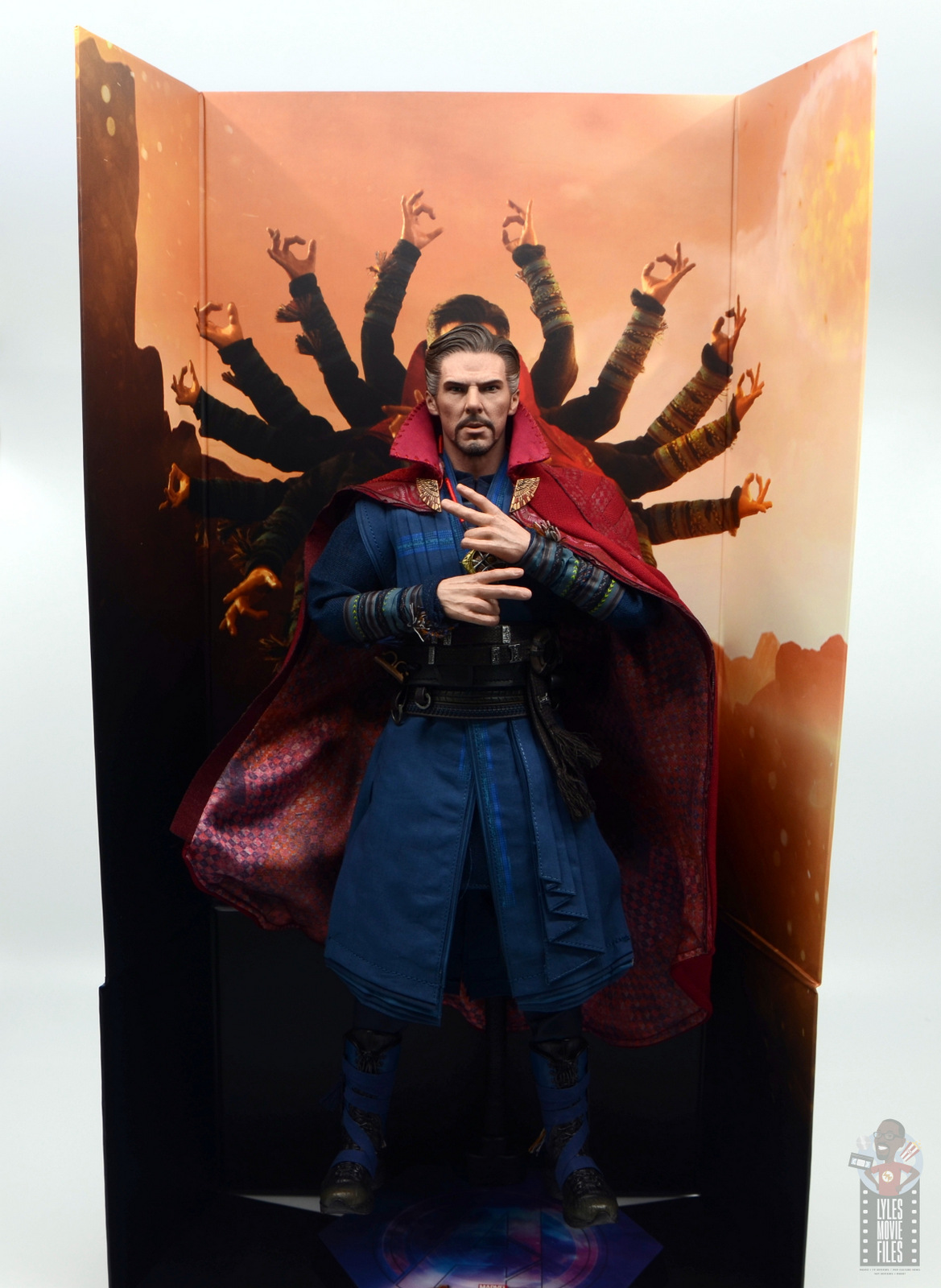 It’s a nice effect piece and showcases that moment when he conjures up mirror illusions to fight Thanos. 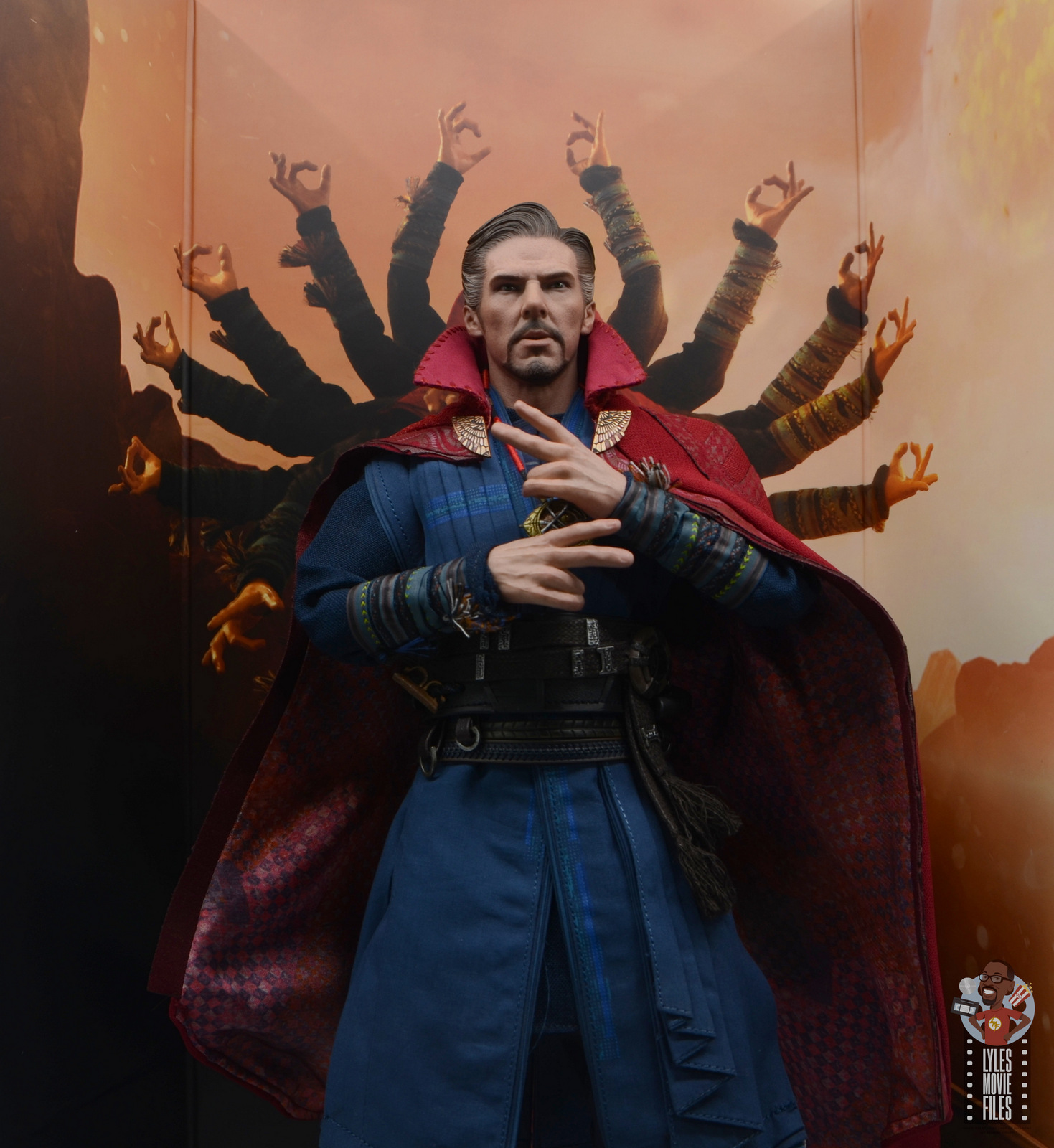 Worth it?  Doctor Strange is higher than the standard Hot Toys figure, but he is balanced out by a slew of accessories. You can get him anywhere from $270 to $290 after shipping. I don’t think that’s a bad value considering some of the other figures who’ve gotten higher price tags without nearly as many accessories. 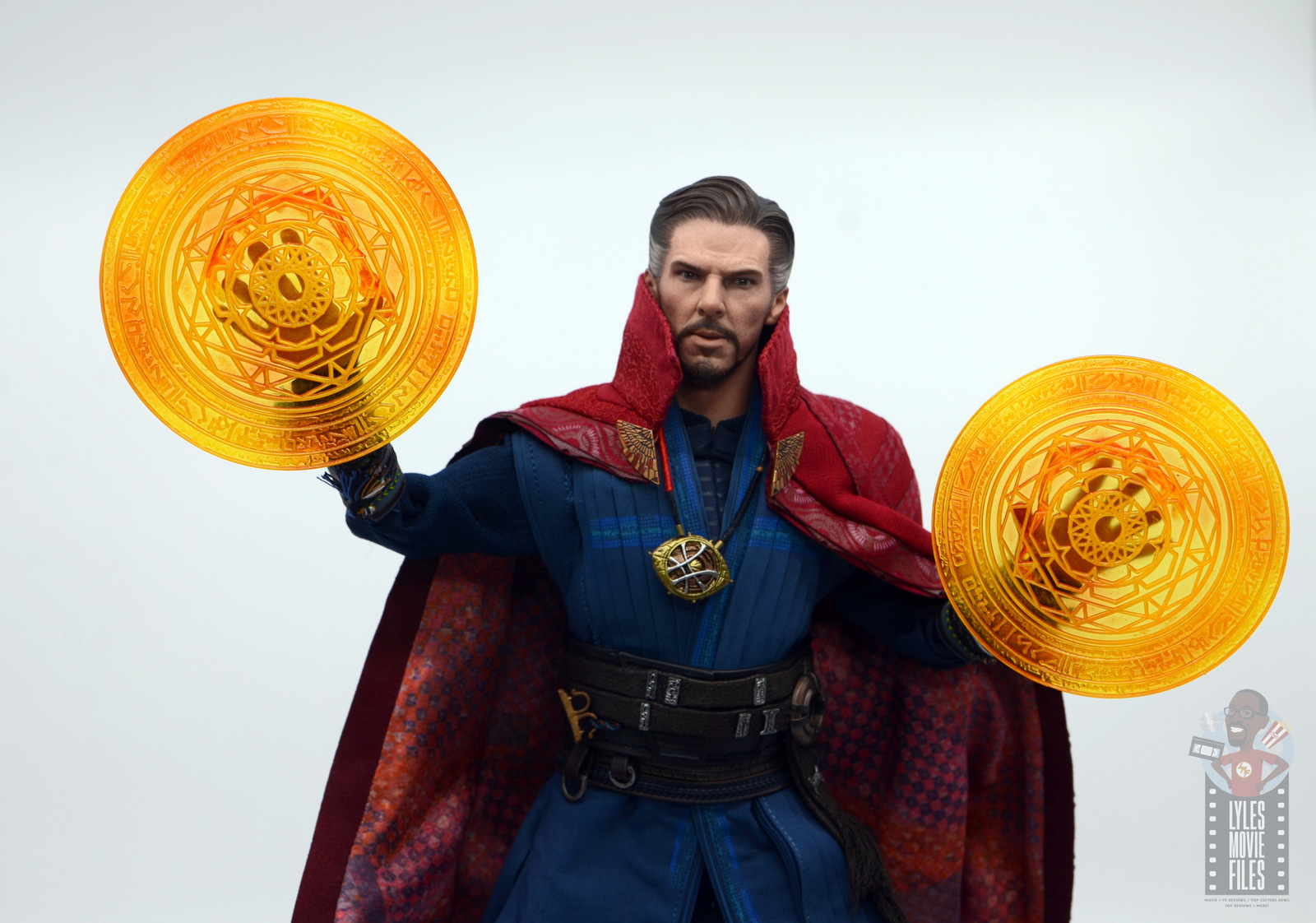 If you held out like me and waited for the Infinity War version your patience is well rewarded with a superior version that should fit in as a nice, prominent piece in your Hot Toys Avengers: Infinity War display. Hand swapping is an immense pain, but it’s not enough to take away from one of Hot Toys’ best Marvel efforts, 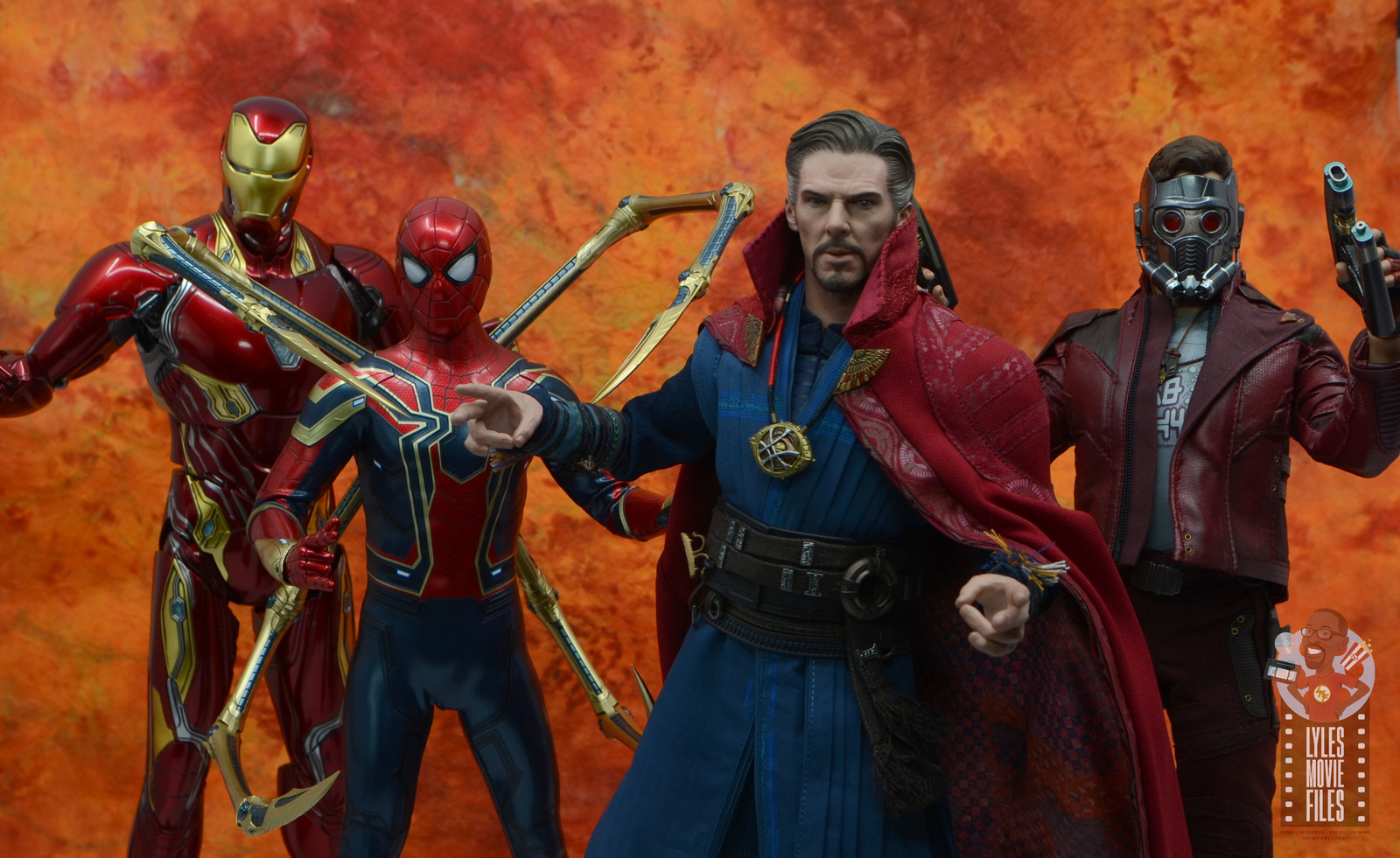 Where to get it?  Sideshow Collectibles currently has Strange on the wait list, which means you’ll need to hurry and get on the list if you want him. 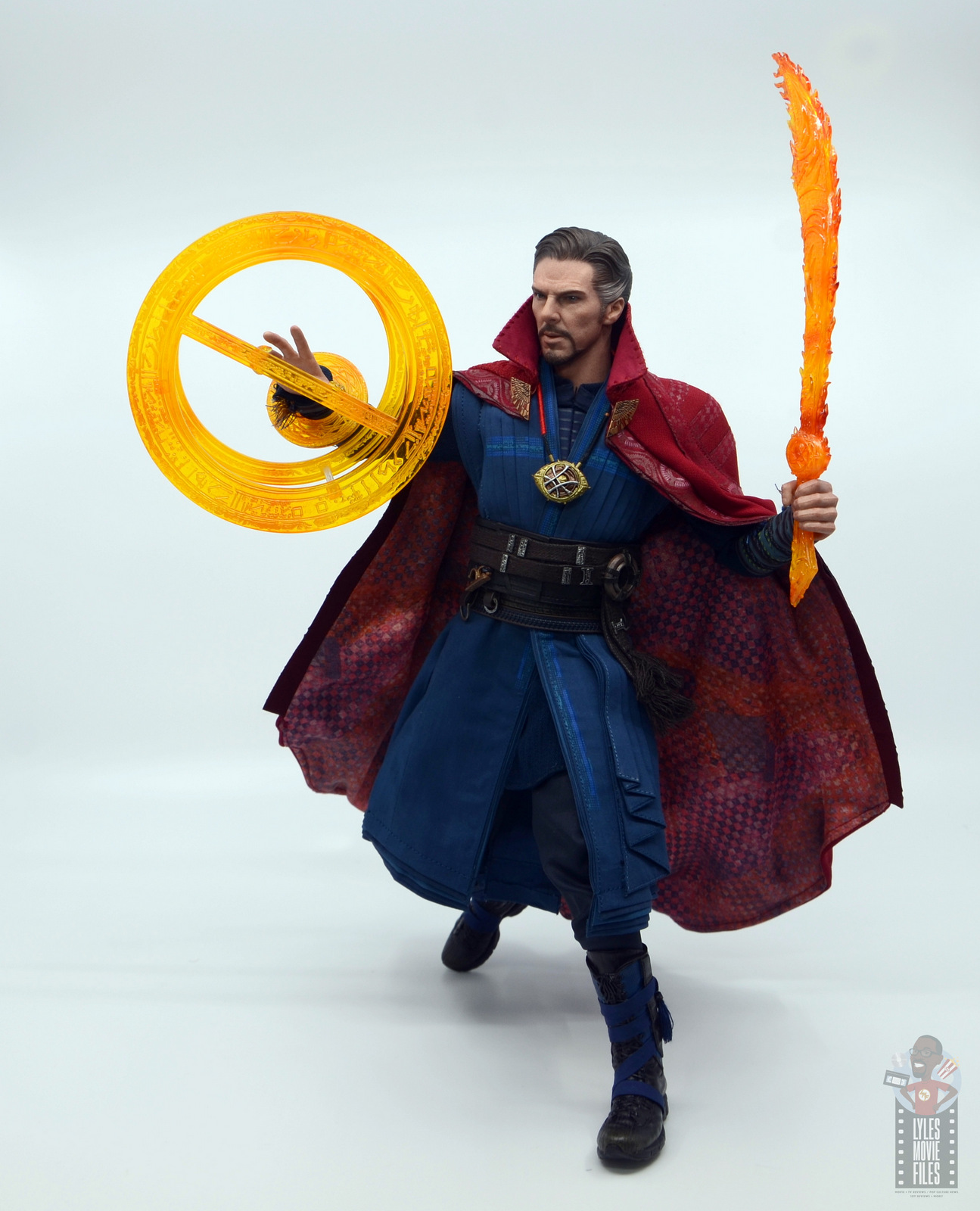