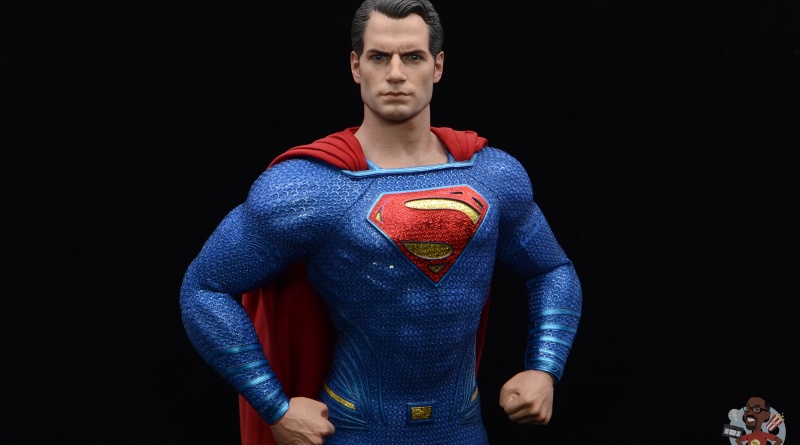 Yes, I planned to knock out the Empire Strikes Back Hoth Leia, but my Hot Toys Justice League Superman arrived today. After months of my DC shelf just being comprised of Batman and Wonder Woman, I needed to cut Supes to the front of the review line. Let’s see how super this version of The Man of Steel is after this prolonged wait.

Packaging:  Superman is packed in a nice warm blue with a portrait of Henry Cavill. Ironically, I skipped the Batman v Superman: Dawn of Justice Superman figure which would have completed my trinity version in that package setup. 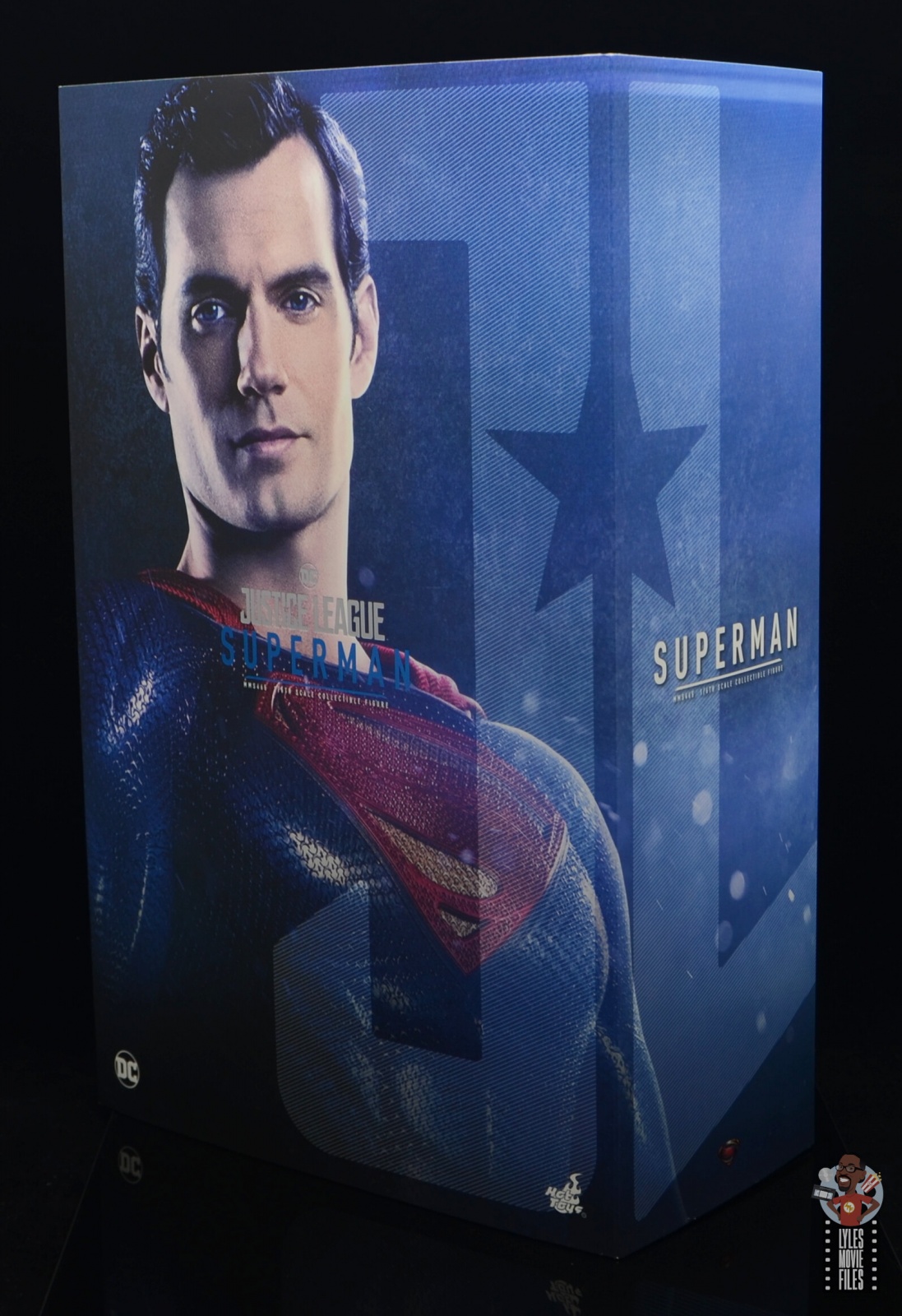 The Justice League packaging isn’t quite as interesting although it’s got some nice embossed elements with the JL and the foil S on the back.

Oddly enough this will probably be my only Hot Toys Justice League figure so I won’t be able to appreciate the differences in the packaging for the other characters. 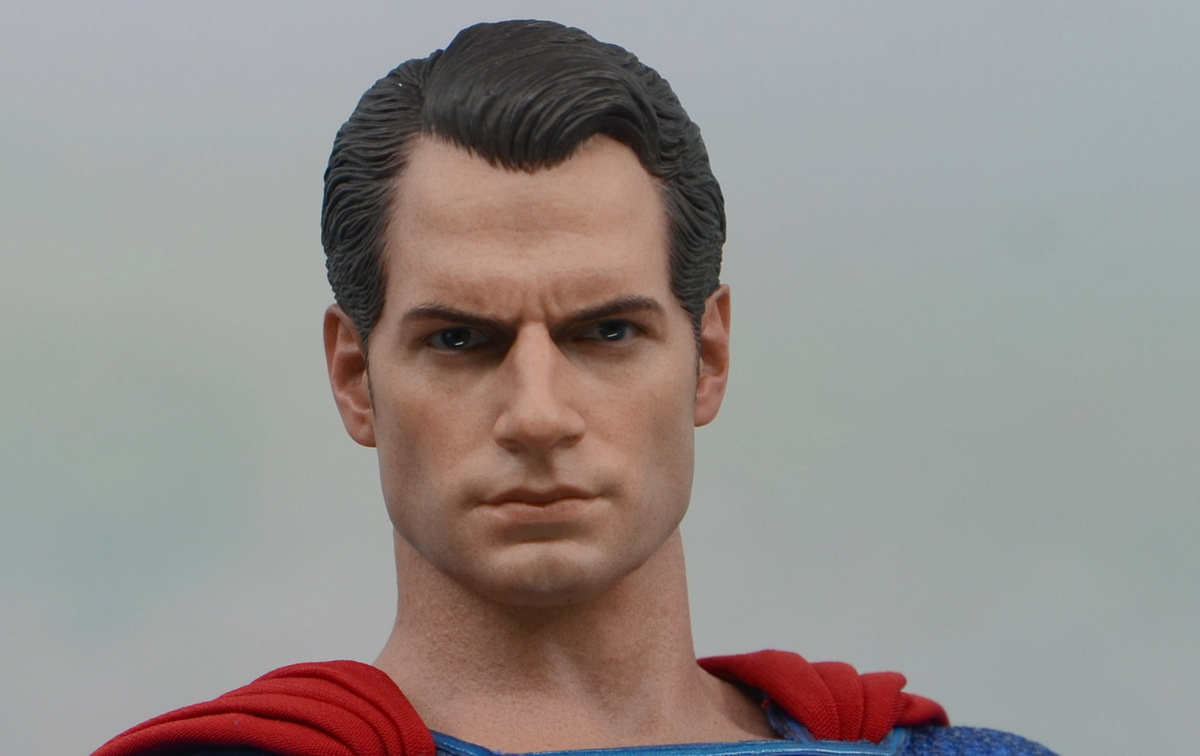 Likeness:  The likeness to Superman actor Henry Cavill is clear. Superman’s head sculpt reflects the strong jaw and cheekbones. I’m not as big a fan of the expression as it’s a little too stern for Justice League Superman.

Regardless of how the Snyder Cut portrayal is the figure inspiration is the theatrical one and Superman was in a much better mood after his initial fight with the Justice League. I would have preferred more of a smile like the package front as that’s more befitting the JL Superman. 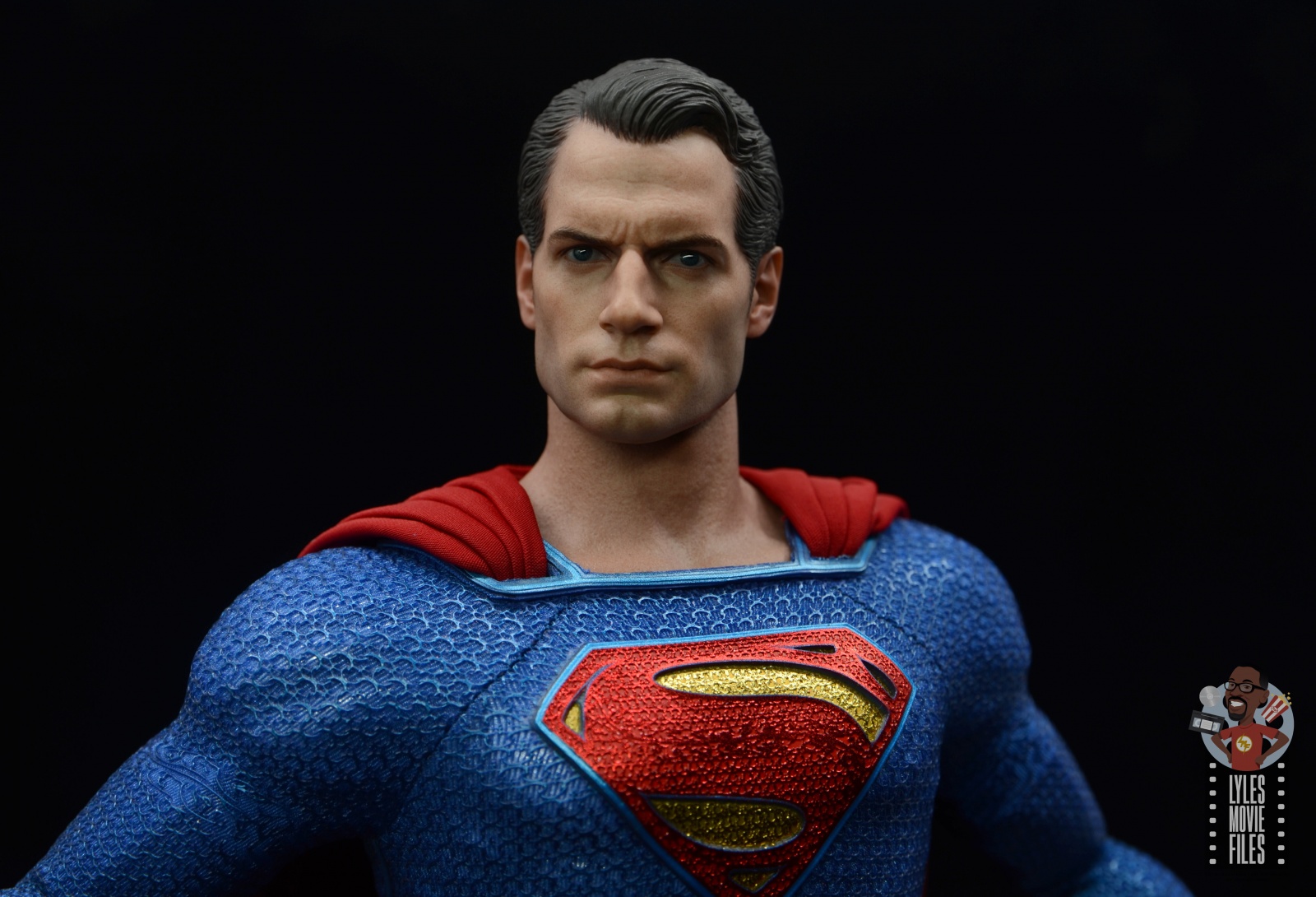 Paint: Hot Toys typically does a fantastic job on the head sculpt painting. Superman doesn’t break the streak. The work on the hairline is really nice and the eyes have that trademark Hot Toys liquid-like paintwork. This is an exceptional paint job.

Uniform:  One of the key improvements over the B v S Superman is the brighter colors on the suit. The blue pops more and the S-shield came out great. This outfit really needs the classic tights on the outside to break up all the blue, but that’s a design issue not one with the outfit itself. 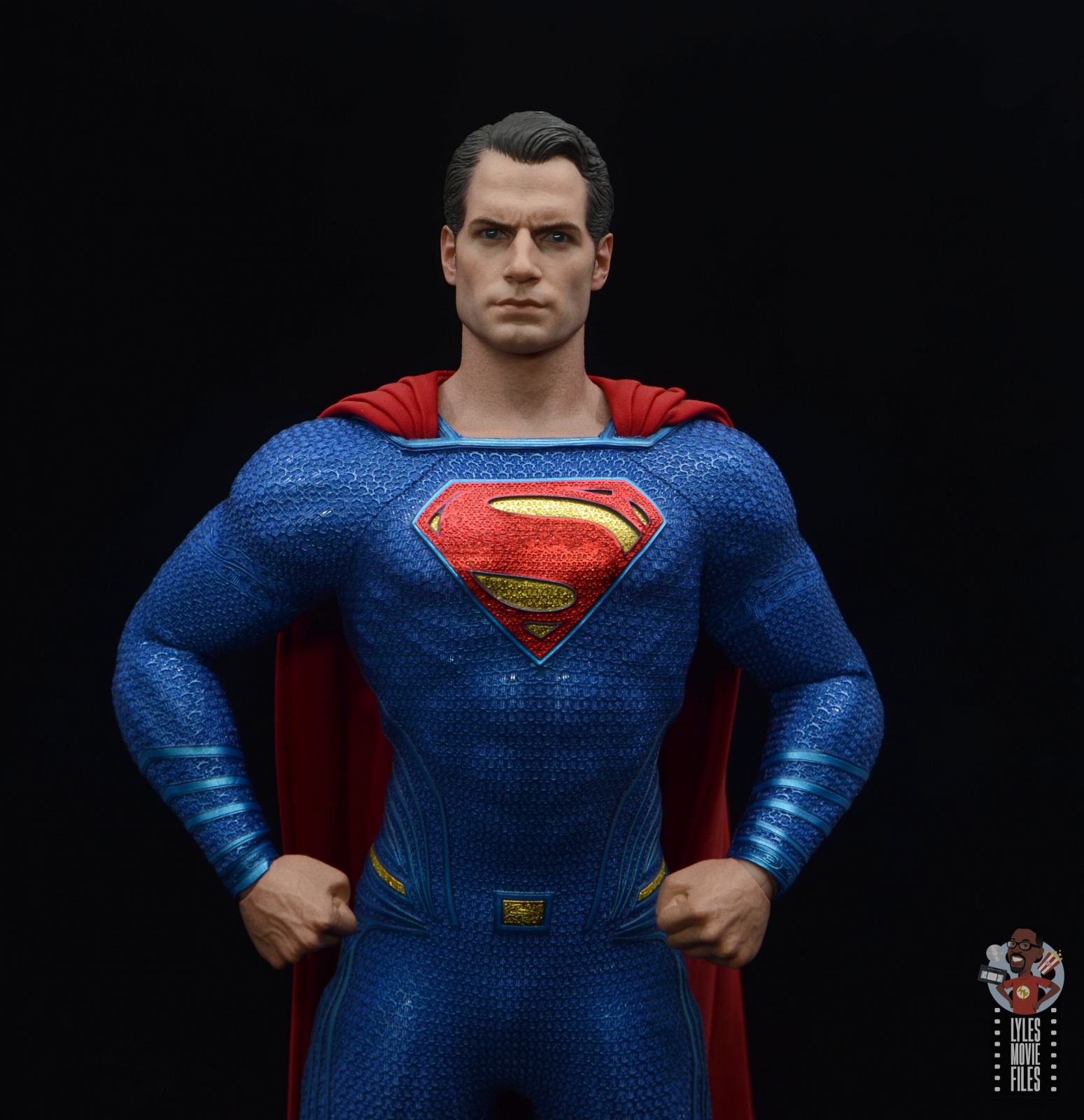 The shiny material Hot Toys used on the uniform really gives it a great sheen. I’ve seen reports that you shouldn’t handle Superman around the S-shield as the fabric is already wearing down.

Scale:  Ideally Superman should be taller than Batman, but Ben Affleck is taller than Henry Cavill in real life by three inches so having them be around the same height is the best we could get. 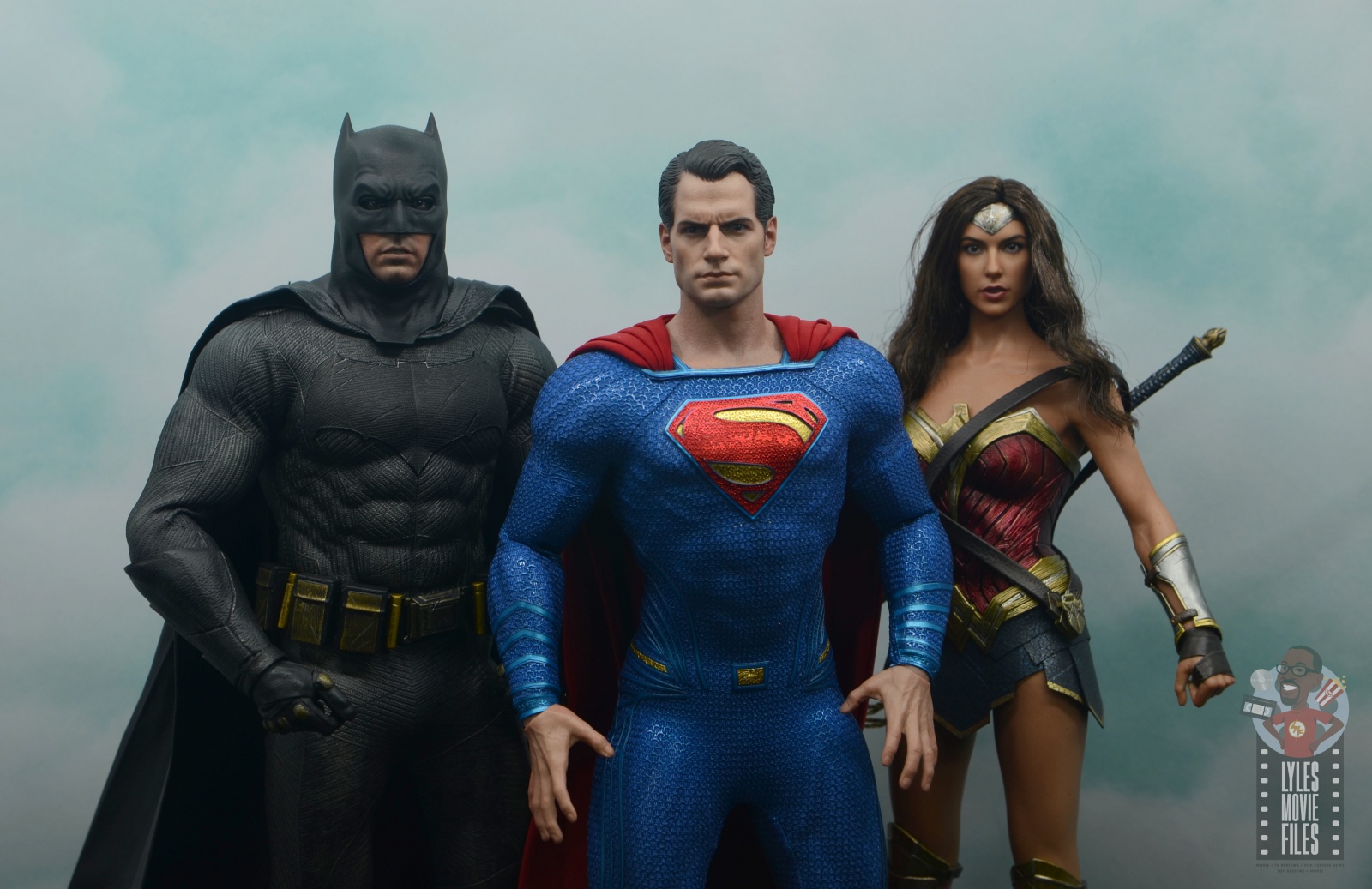 Articulation:  Despite the one piece nature of the outfit, Superman is pretty flexible. 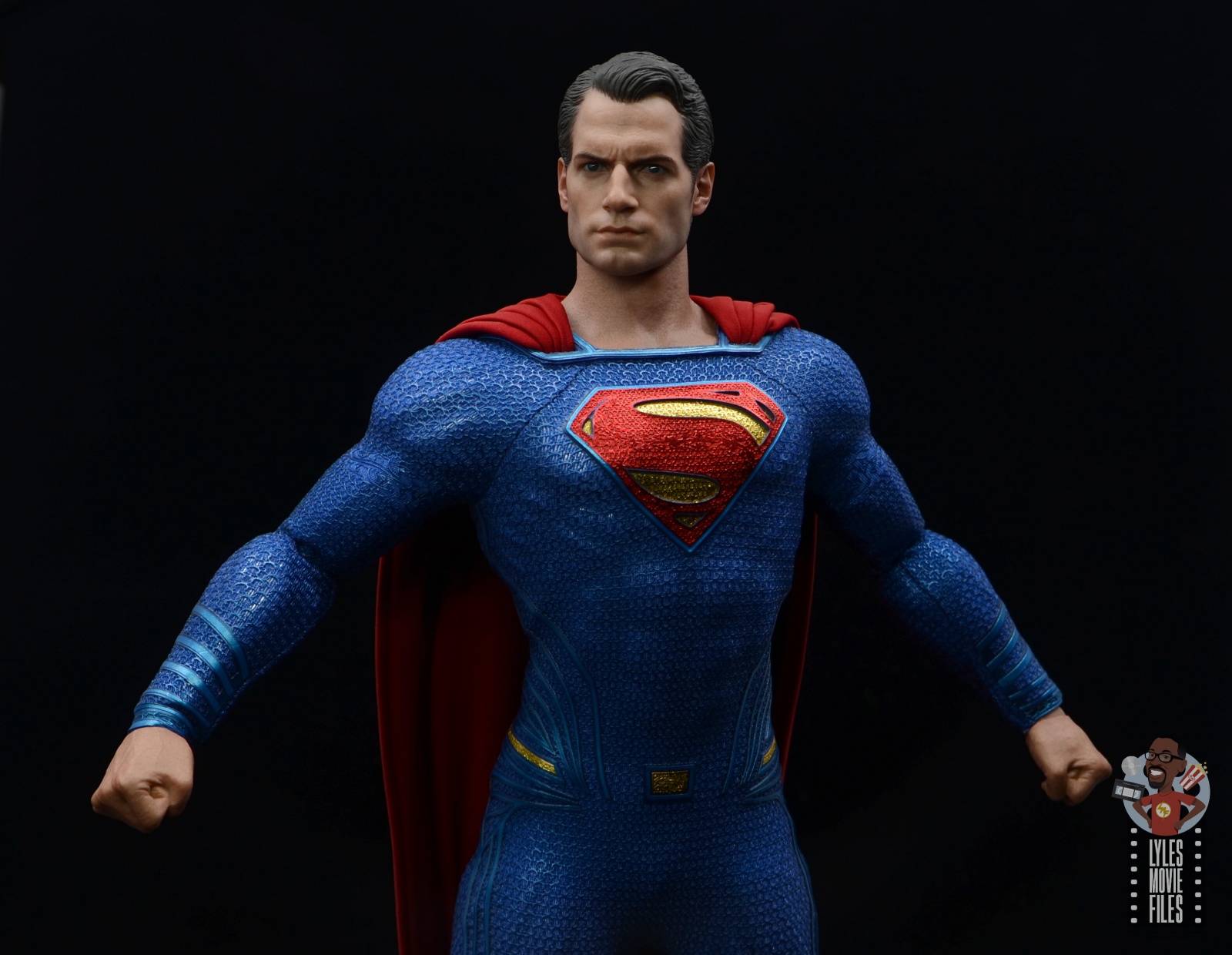 I was able to get easy punch, flying and charging poses. The outfit has enough give that it doesn’t feel restrained when I posed him. 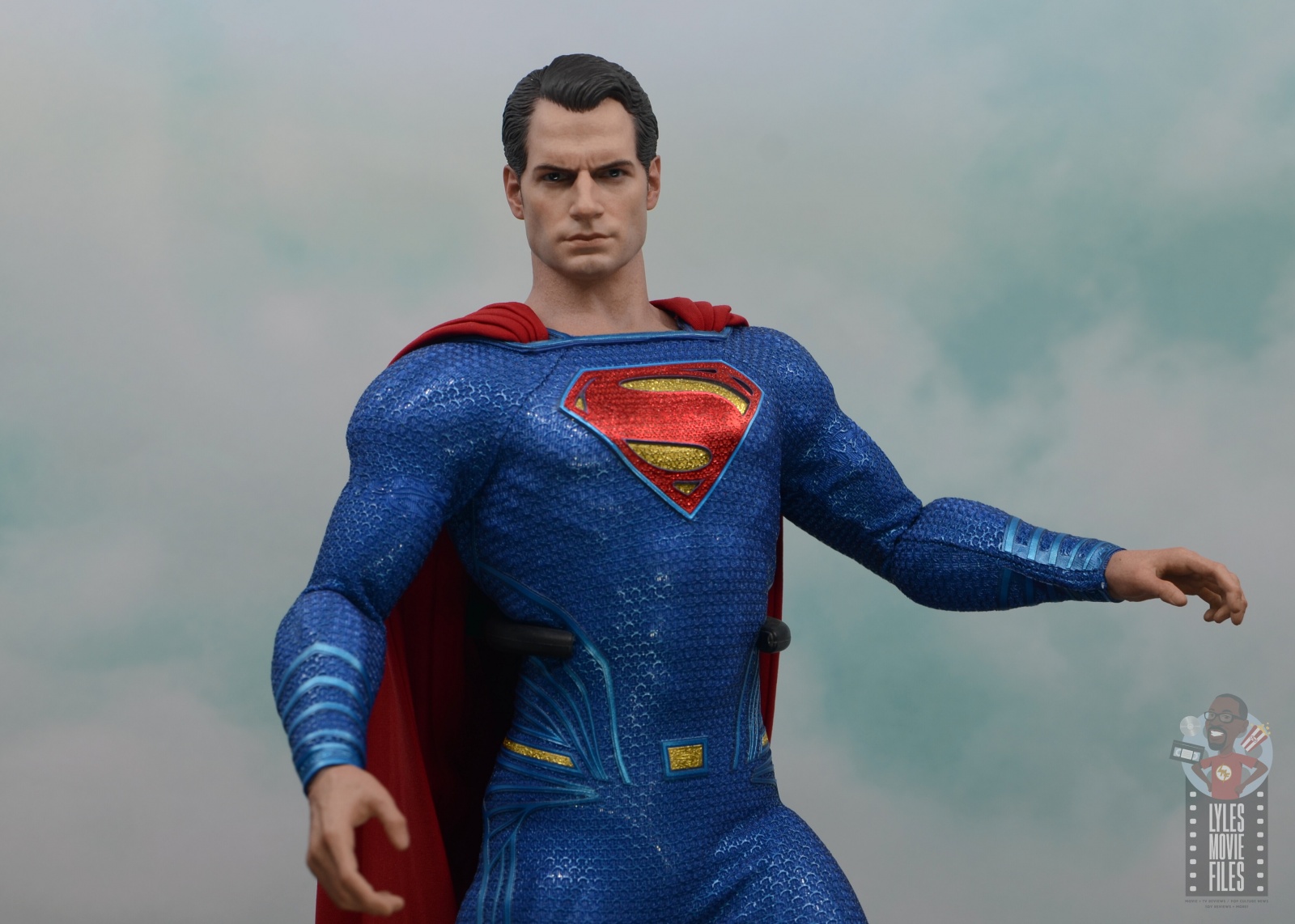 Of course there’s going to be some bunching when you pivot the figure. 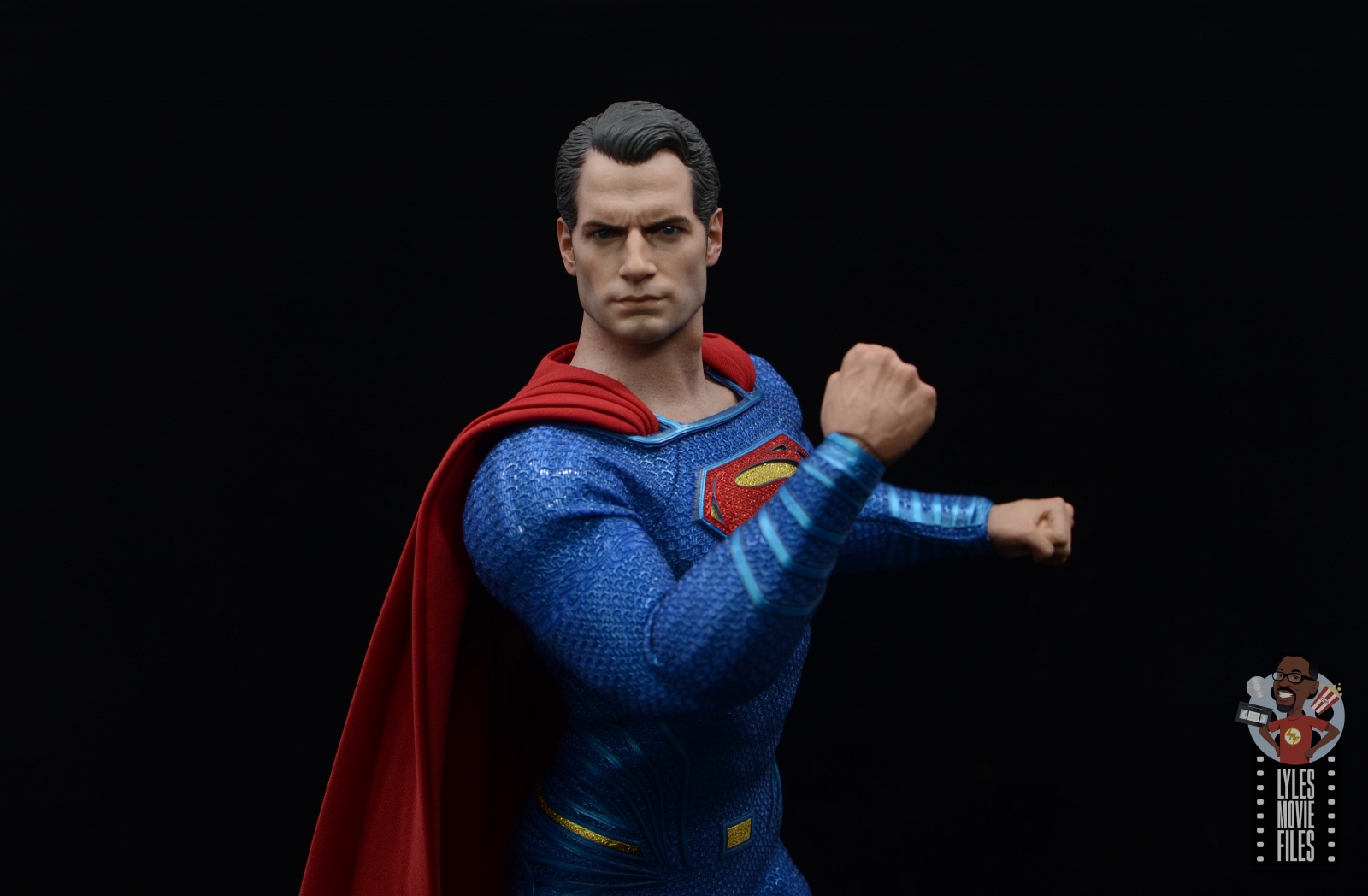 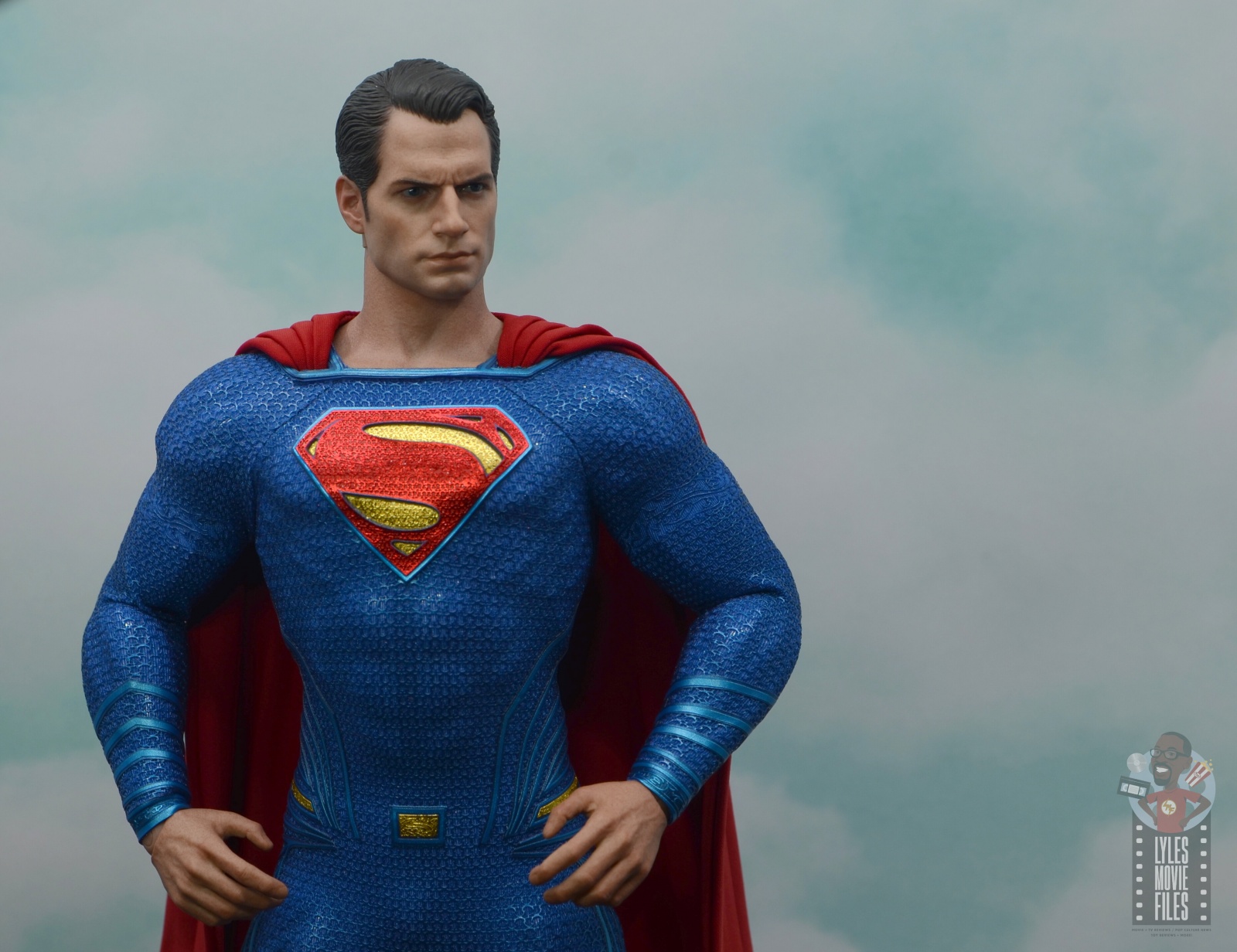 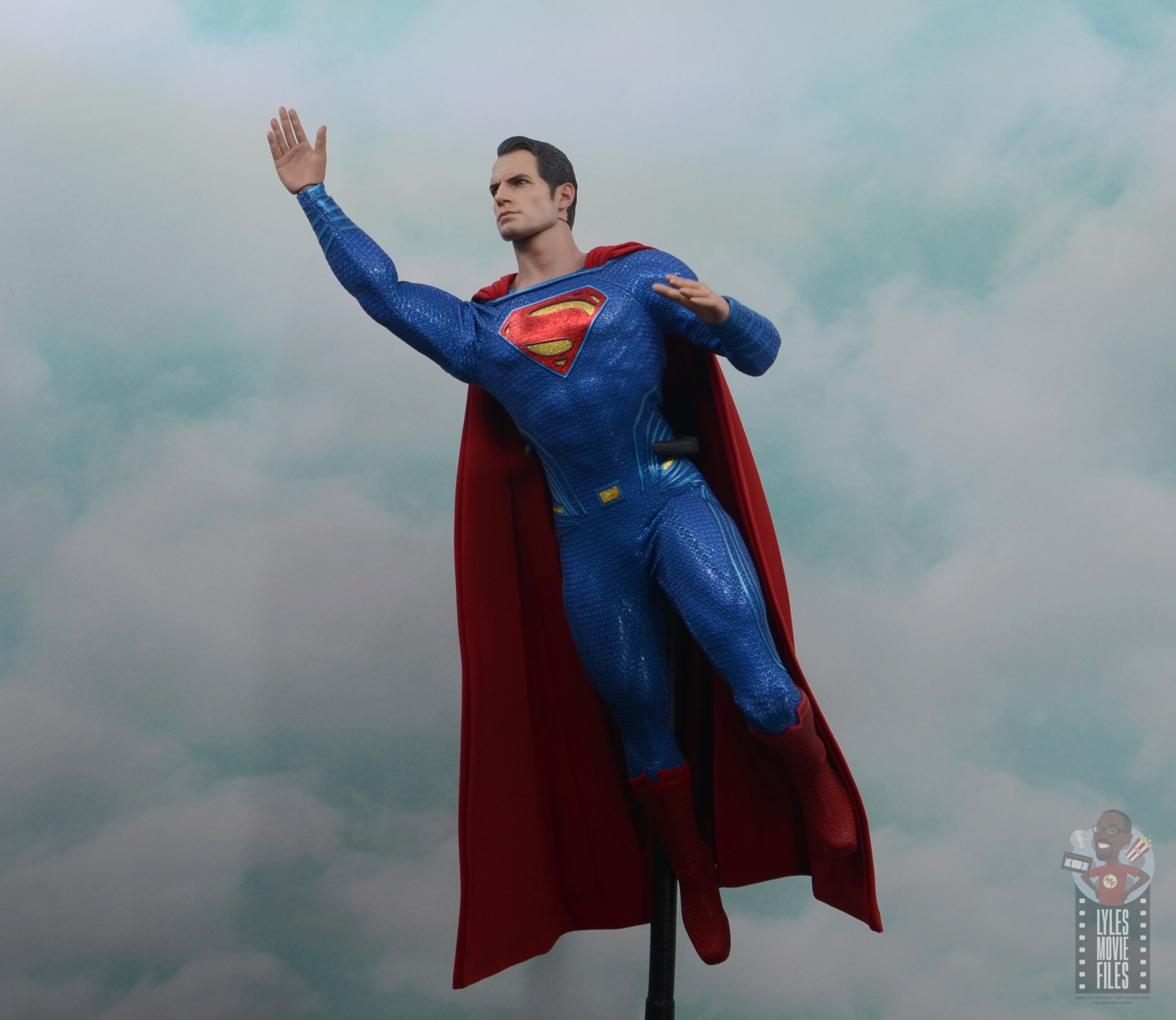 Accessories:  Compared to both Batman and Wonder Woman, Superman is lacking on this front. 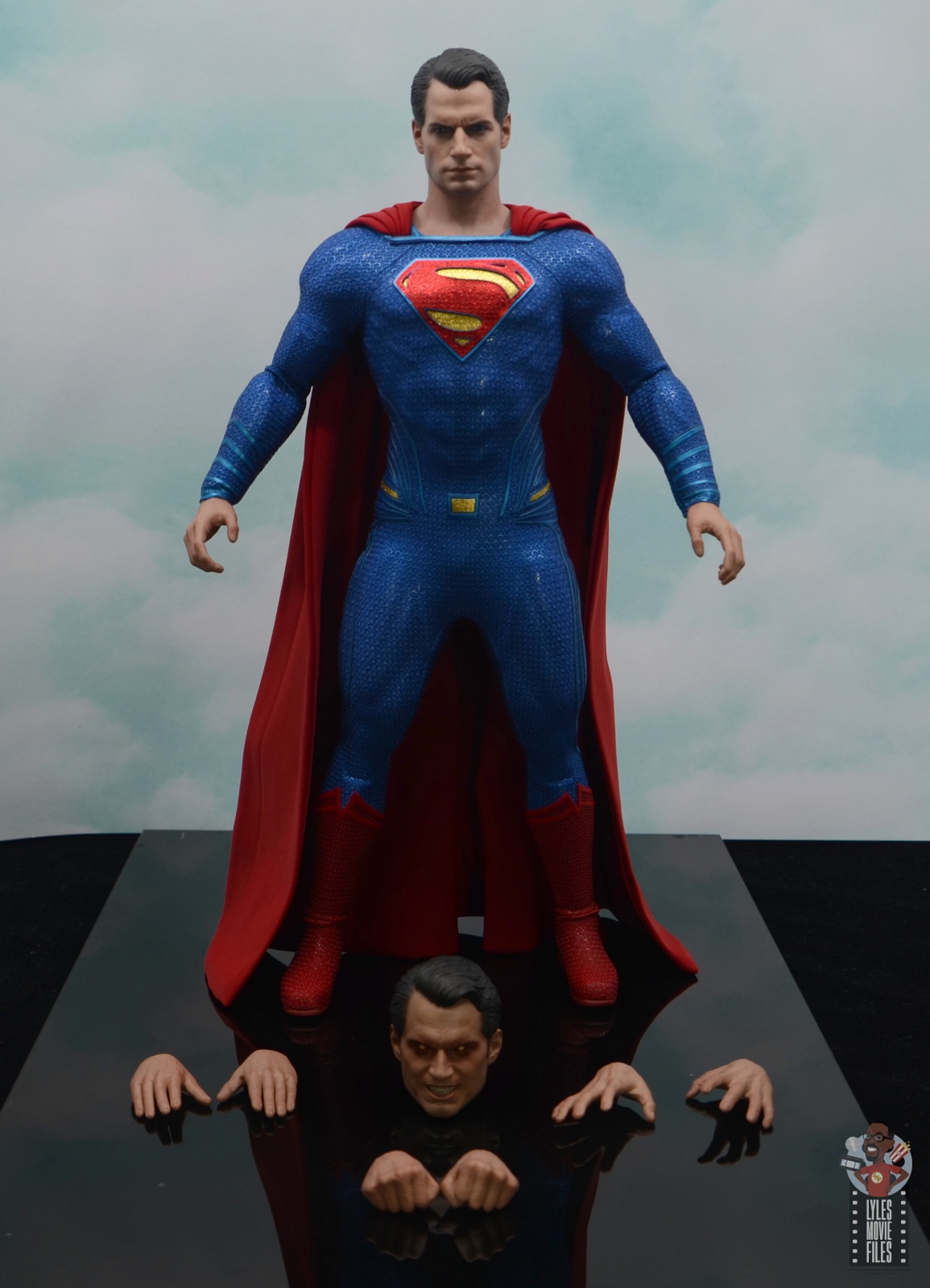 He also has an alternate portrait with an angrier heat vision head sculpt. More on that in a moment. 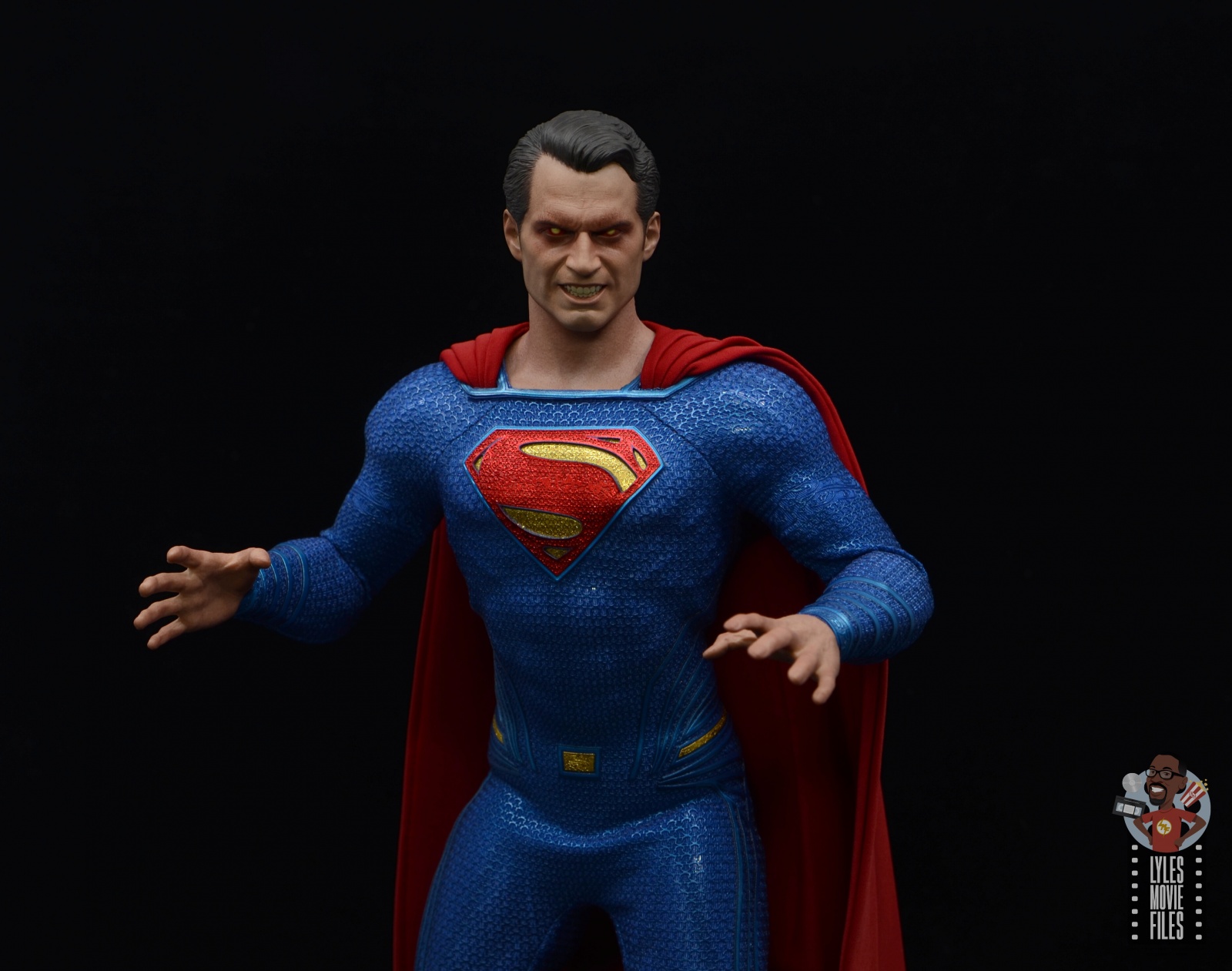 And he comes with the Justice League stand. That’s a very small amount especially at this price point.

Light-Up Feature:  Superman has an extra head with a light-up feature for his heat vision. 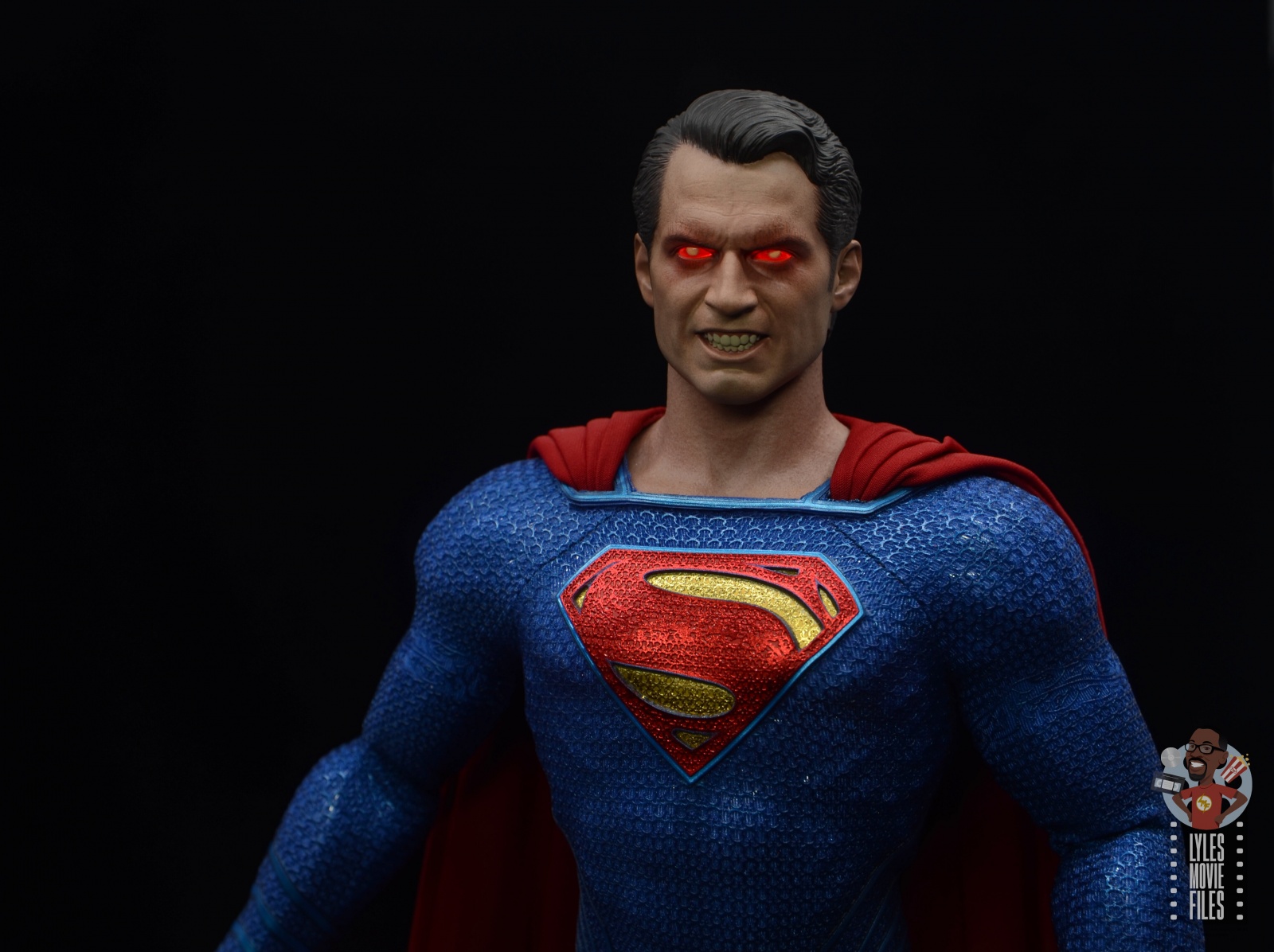 My usual light-up nemesis, the batteries, isn’t a big problem this time and the light is very strong. This is one of the better light-up features I’ve seen from Hot Toys. 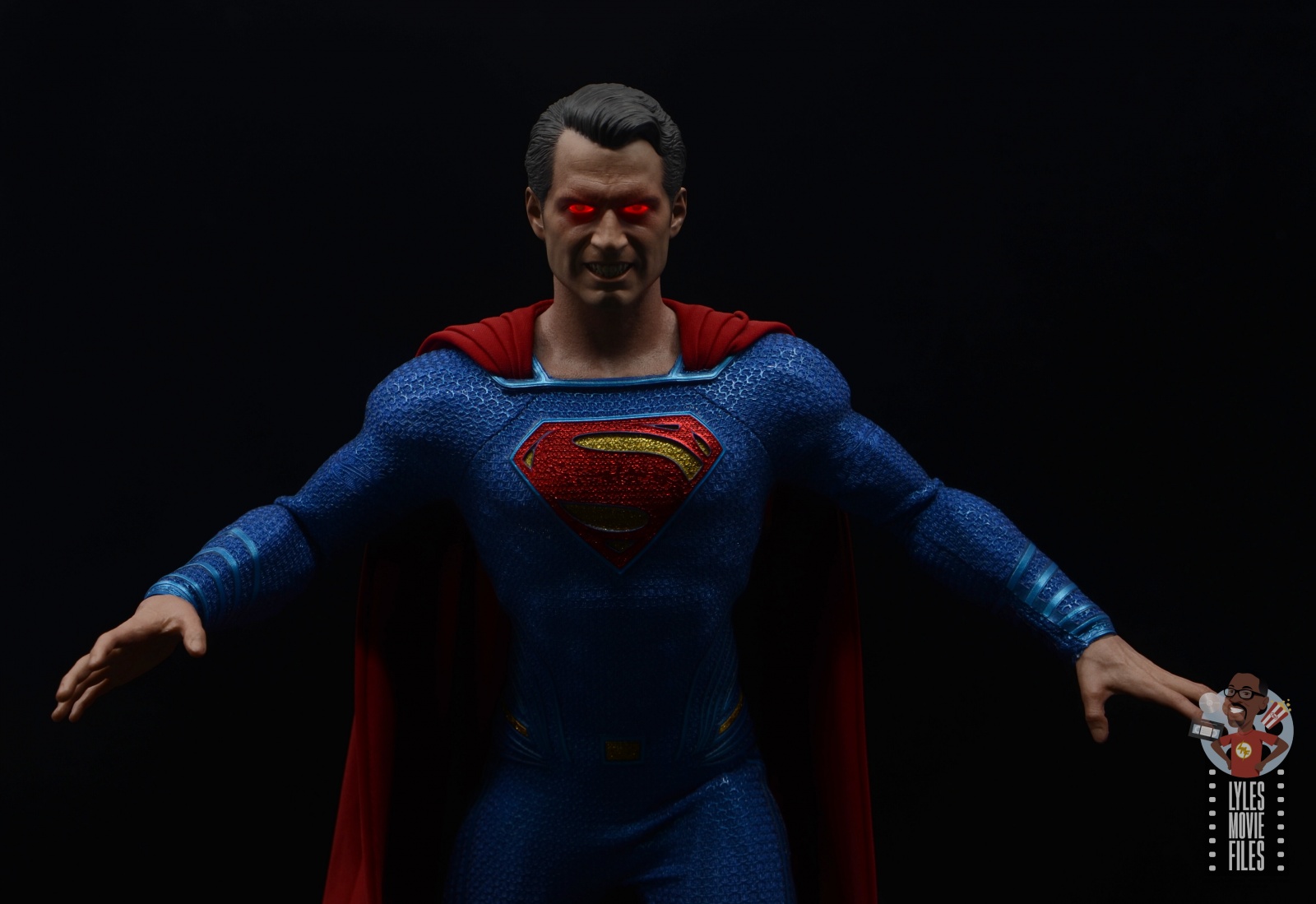 Worth it? This figure is about $245, which is about $20 too much given the scant accessories. The heat vision head isn’t worth that much. Of course since Superman is the other prominent member of the Justice League it’s easy to see why Hot Toys jacked the price up for him. 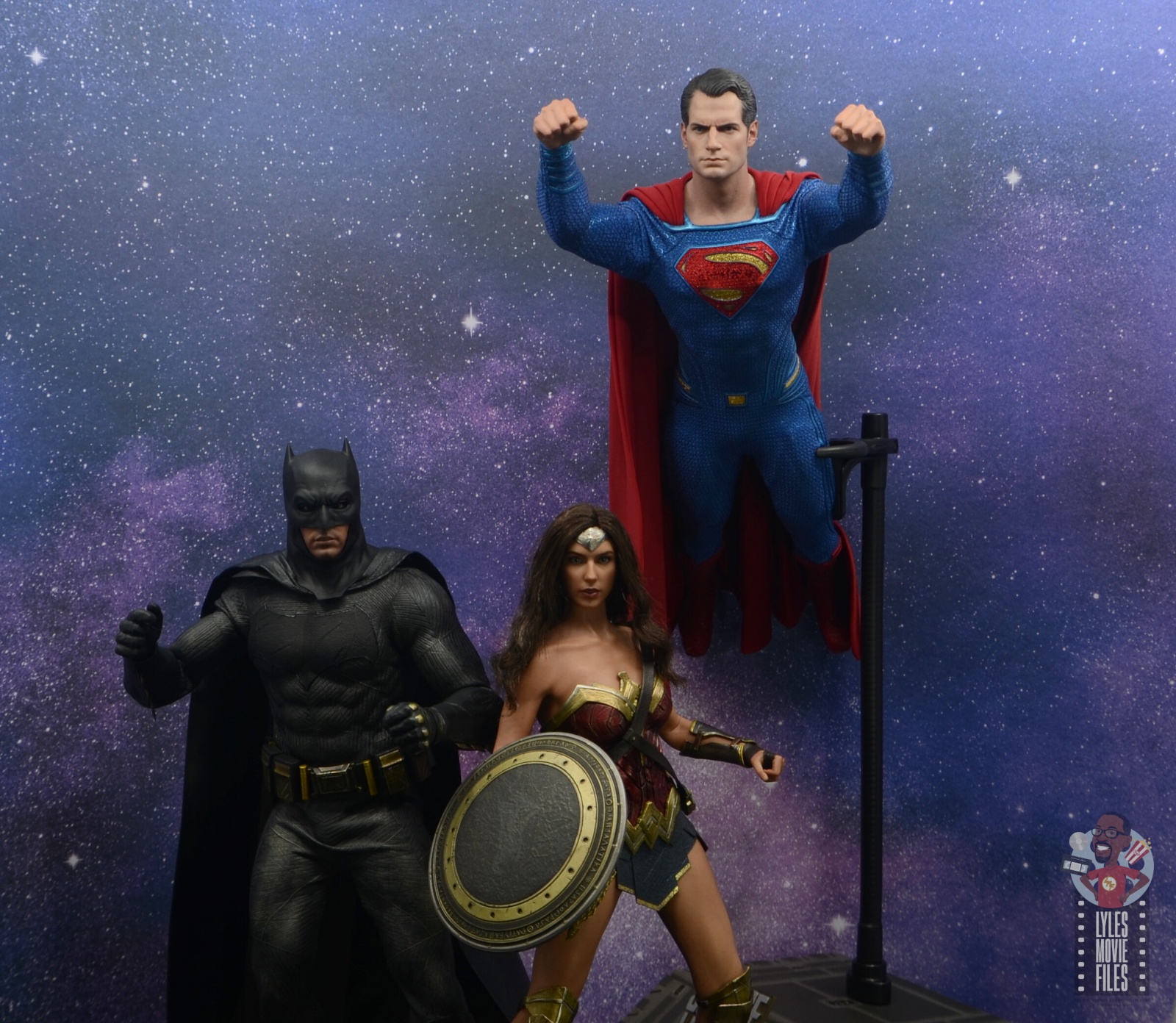 I’m glad to have a Hot Toys DCEU Superman even if the price tag is a little excessive. 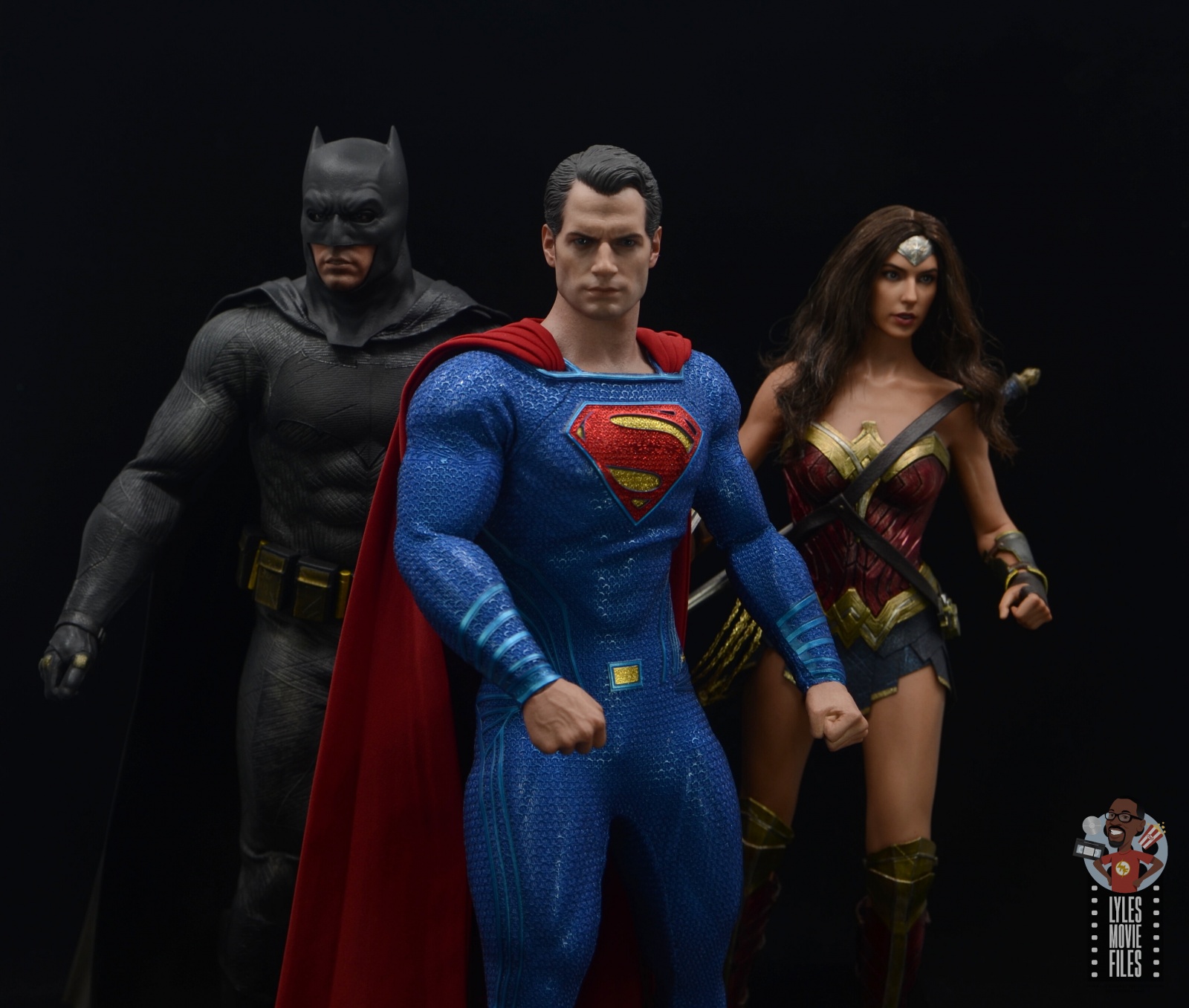 Where to get it?  Sideshow Collectibles still has the figure up for pre-order, but I think he’s not going to last long especially when you consider JL versions of Batman, Aquaman, Wonder Woman and The Flash are already available.