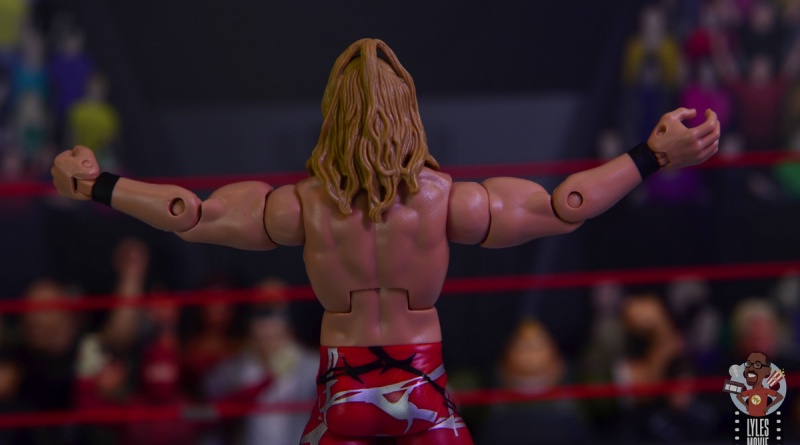 When Chris Jericho made his debut in the WWF there was a ton of excitement. One of WCW’s brightest young stars made the jump and was being treated like a big deal. Silly us. No, he had to pay his WWF dues (re: lose to Triple H and Chyna) and toil around in random feuds before reaching the status we all knew he could reach.

With The Best of Attitude Era, Mattel finally got around to knocking out an early era WWF Y2J figure. If we’re going through eras of Jericho, this is one of the more fascinating and definitely one worthy of a figure. Let’s see if it breaks the walls down.

Packaging:  As usual, Mattel gets a bit more creative with its unique subset lines than the standard Elite packaging. This features more of that edgy set design from the Raw is War era with a brick background and a spray painted WW(lose the F).

Attitude Era is spray painted on the packaging and the art features Jericho in what kinda seems like a photoshopped version of a different picture of The Ayatollah of Rock n Rolla. The bio is great fully breaking down the significance of Jericho’s attire.

Likeness:  Mattel got the Jericho likeness from this early WWF run down. The obnoxious top knot and hair flows nicely. Jericho’s pompous expression is perfectly fitting as well. 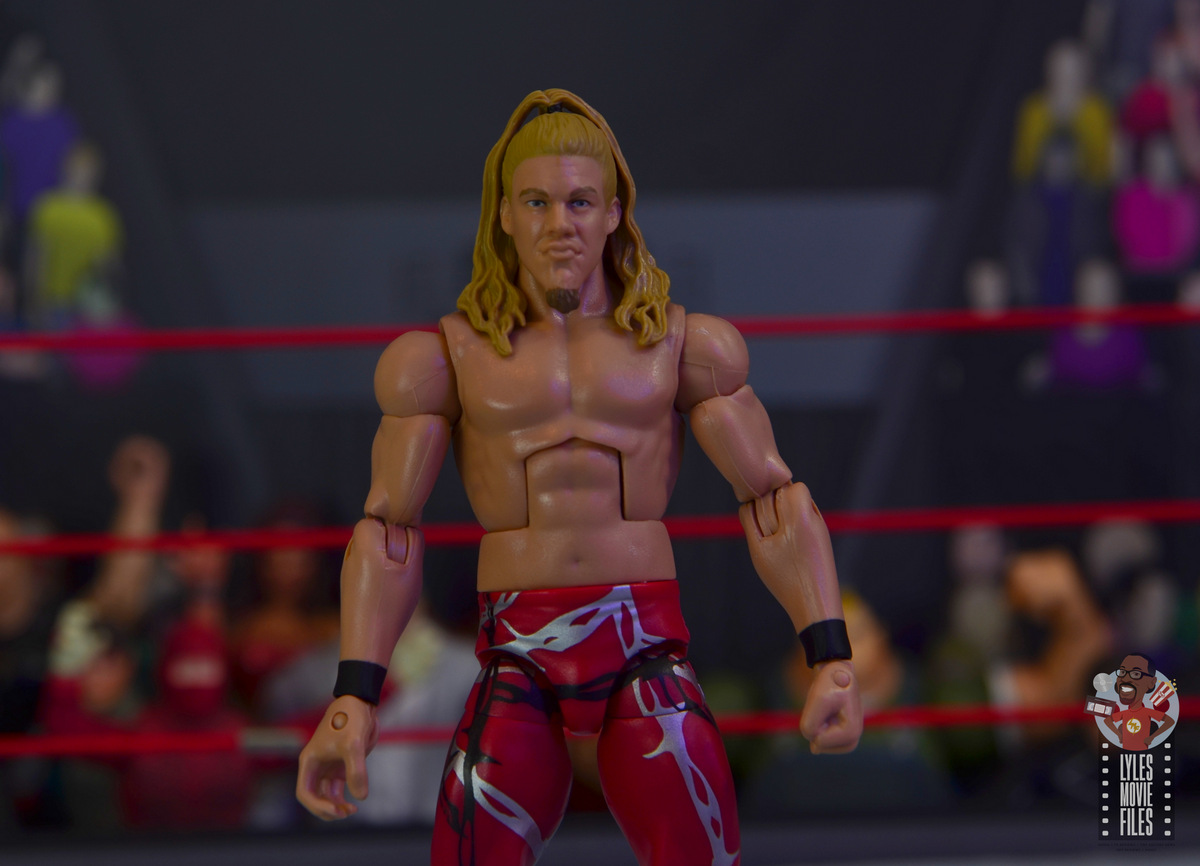 Jericho was in pretty decent shape, but Mattel needed a wider moderately cut body for prime Jericho. The one they went with is a little too slender.

The interesting thing about this figure is Jericho didn’t wear wrestling tights when he debuted.

He wore a super shiny shirt and black leather pants. As usual, I prefer the ring attire so this is not an issue for me although I would have loved if Mattel could have somehow found a way to make the shiny shirt out of a cloth material. 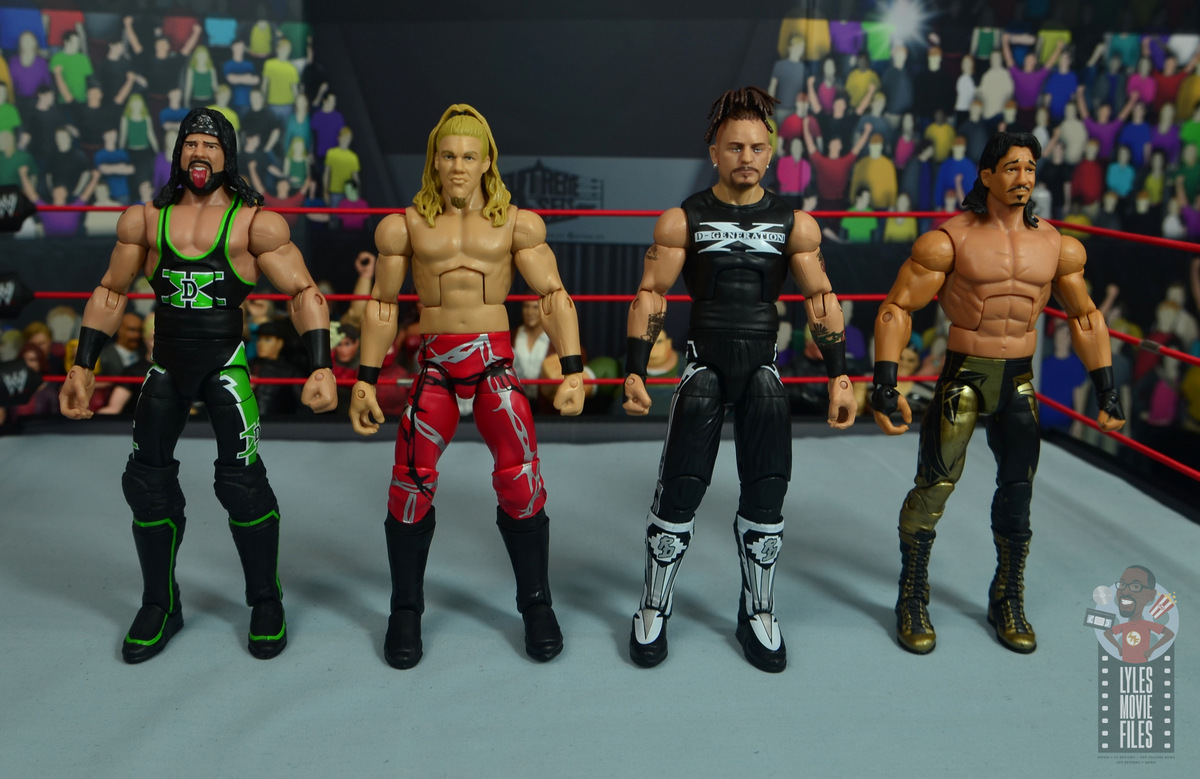 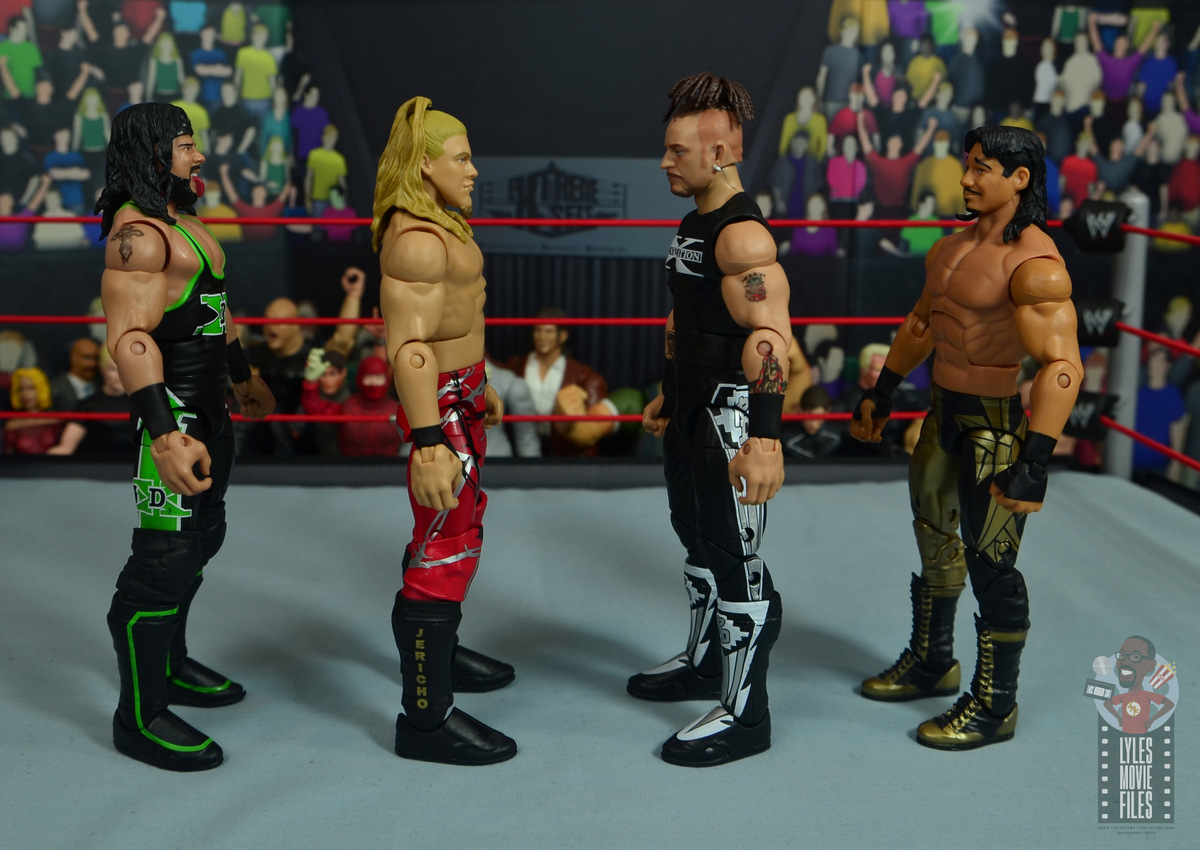 Paint:  Jericho seemed to wear this red, silver and black barbed wire tights attire more when he was in the Intercontinental Title champion. Ironically, Jericho wore black kneepads, but Mattel went the extra step and painted the kneepads to line up with the tights.

Jericho is written along the sides of both boots as well. 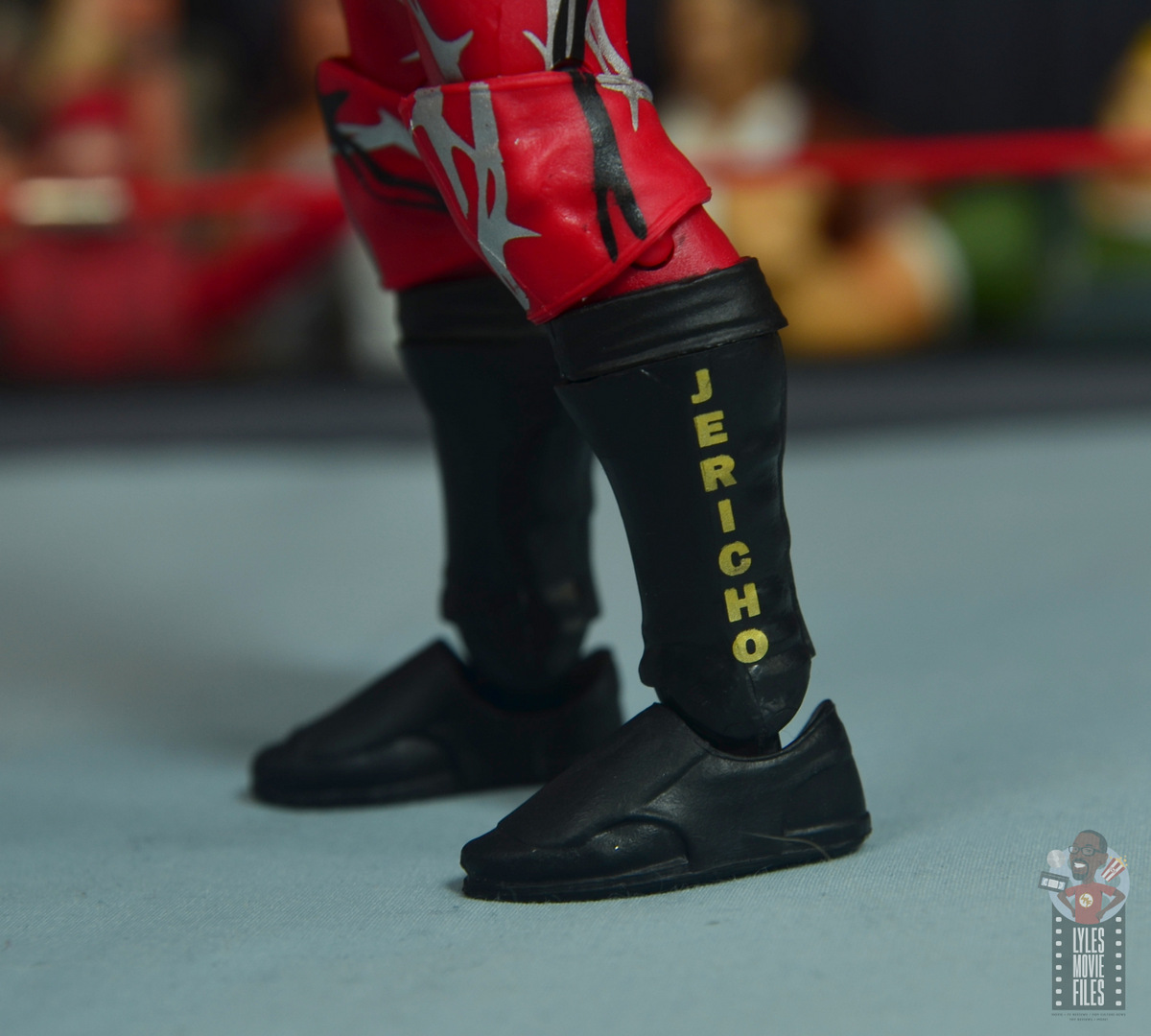 Of course it would have been nice for Mattel to have dirtied up Jericho’s hair somewhat to show his darker roots it would have looked even better.

Articulation:  Jericho features the standard Elite articulation so you won’t have many problems pulling off his moves.  The Ultimate Edition articulation would make for slightly more convincing Walls of Jericho. 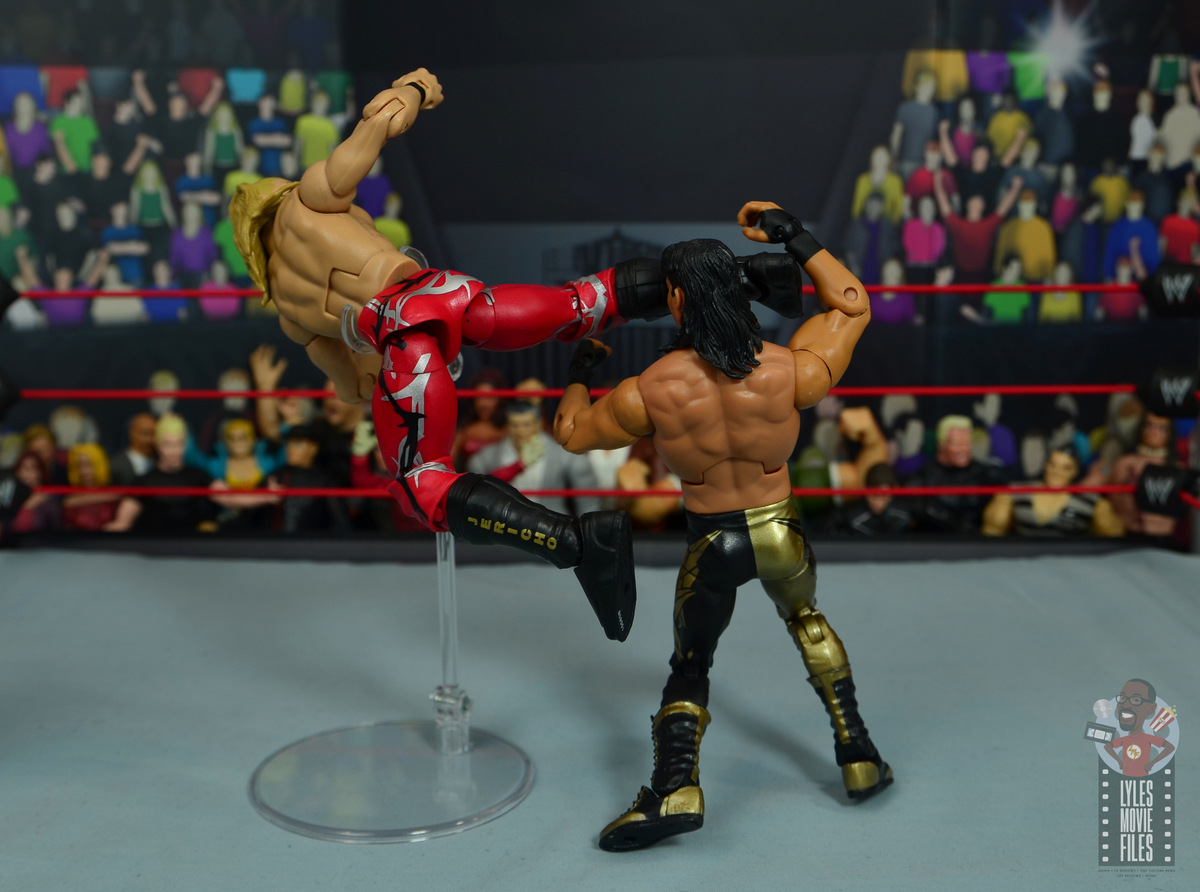 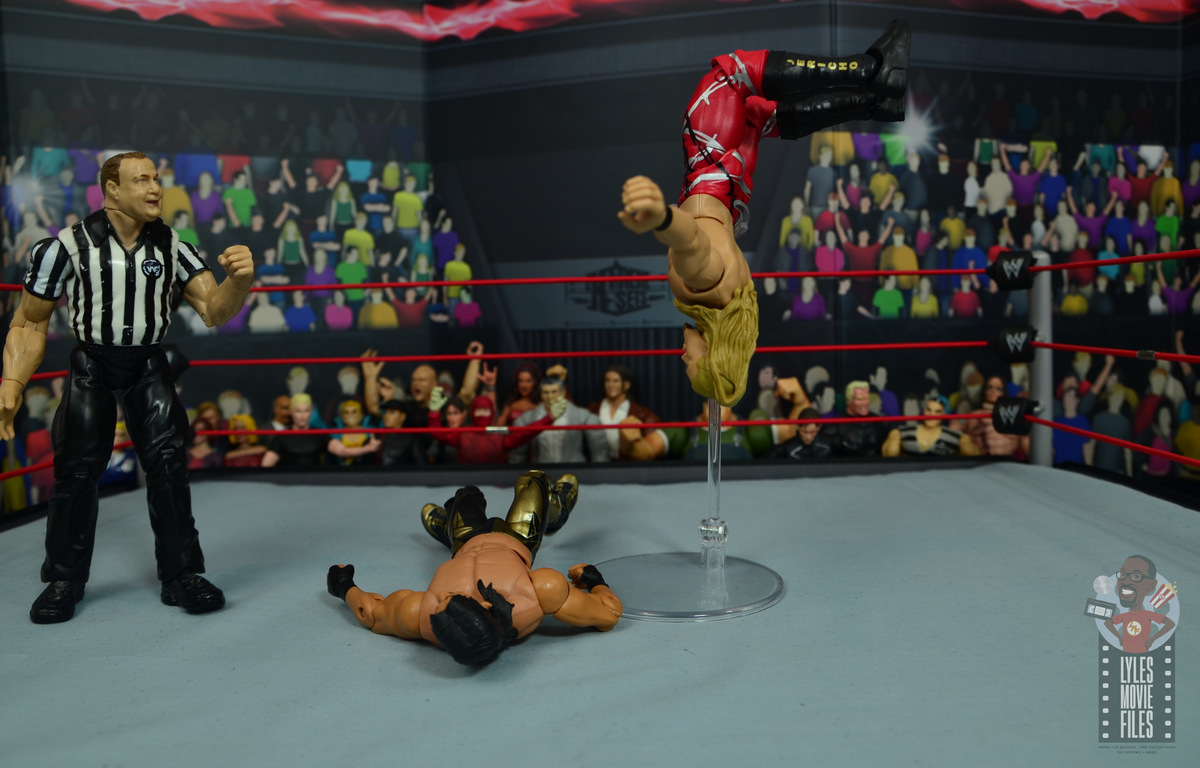 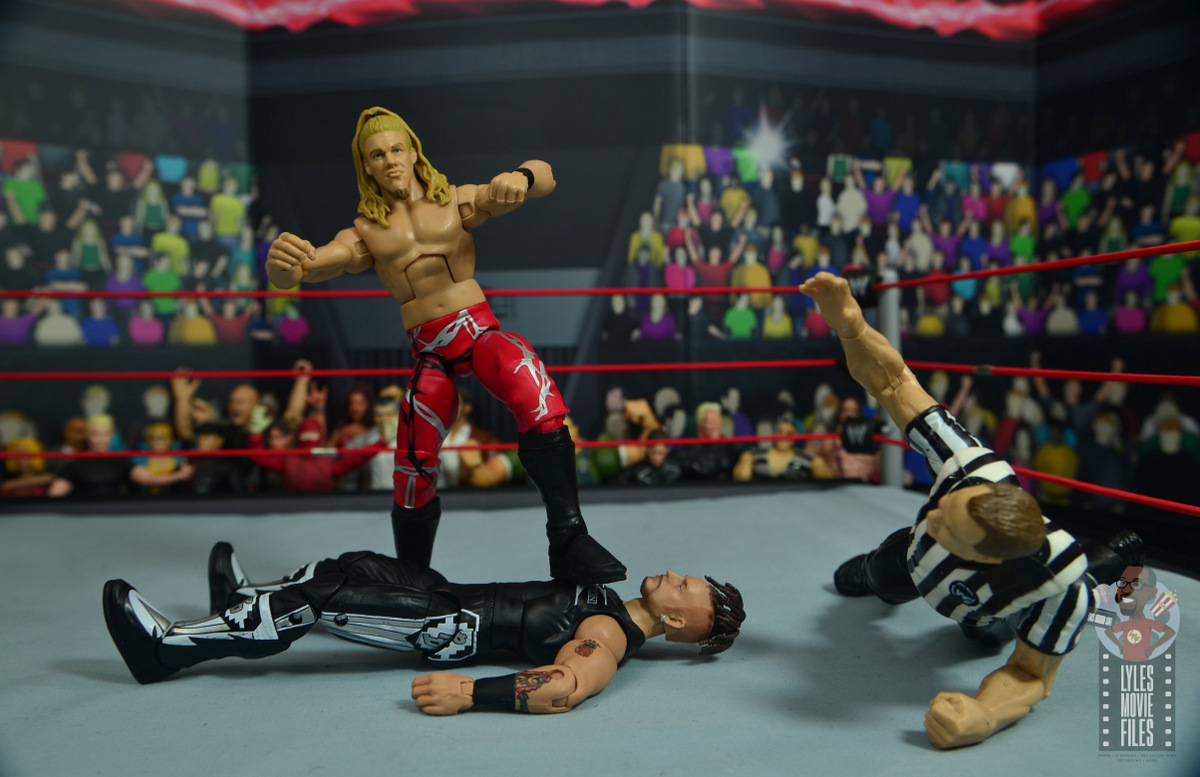 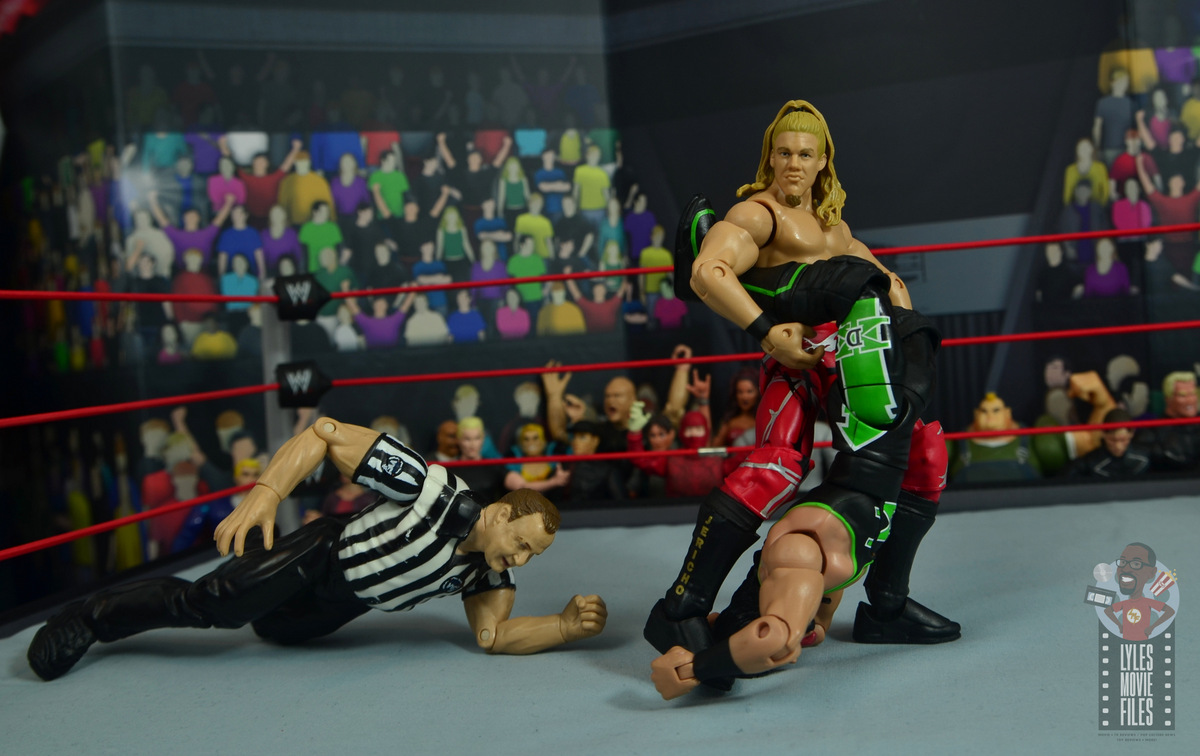 Accessories:  Jericho comes with a Raw is Jericho cloth T-shirt. I’m a fan as this is somewhat of an iconic Jericho shirt. It’s certainly worth having in figure form. 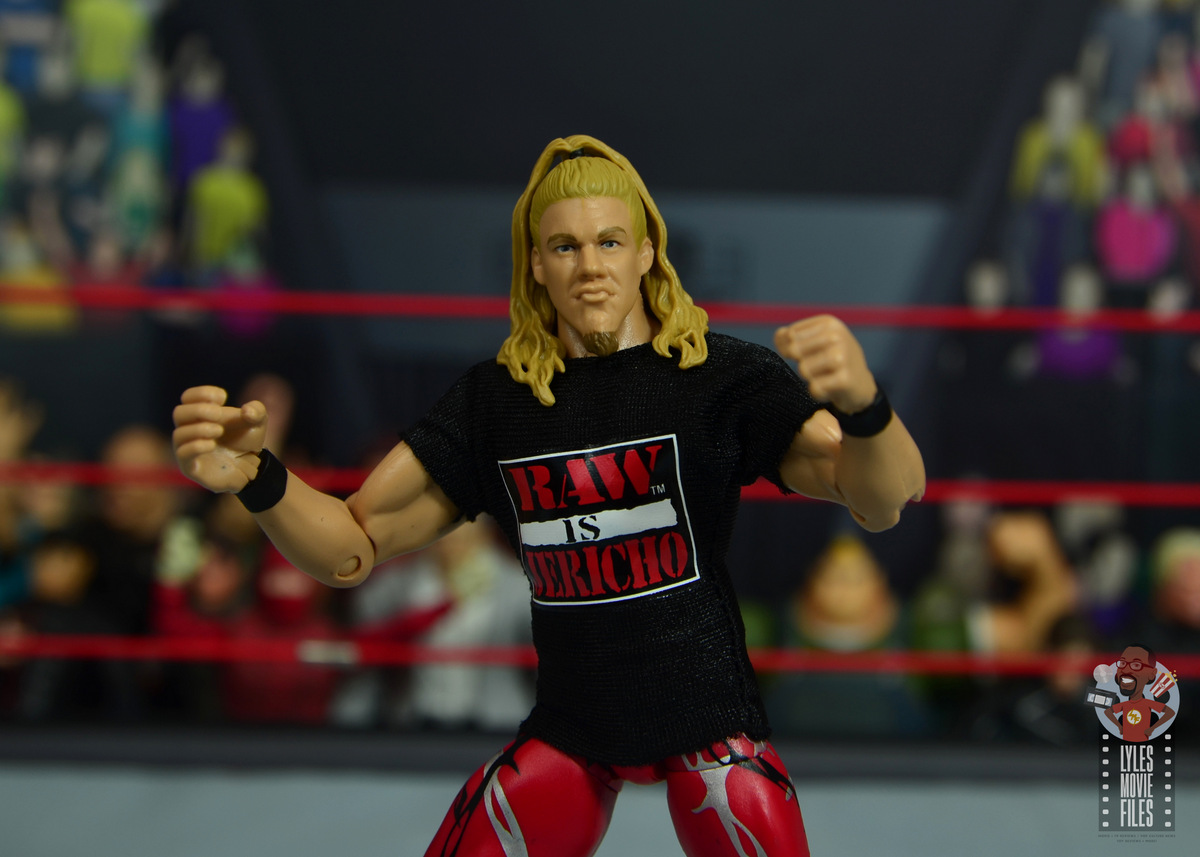 He also comes with a WWE mic. Yeah, it’s not a lot to get excited about, but it’s fine. 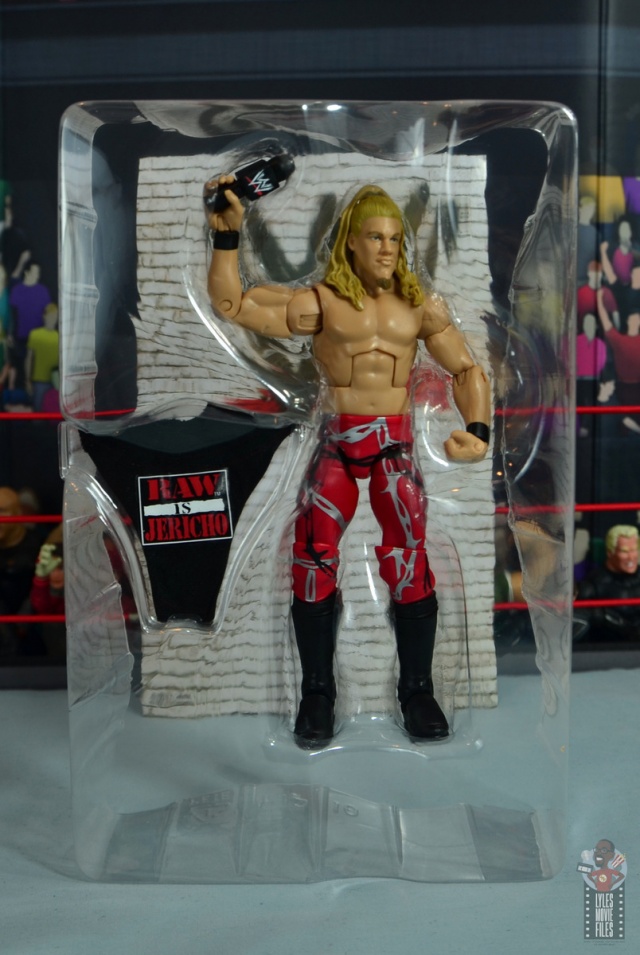 Worth it?  I waited for a while to get this figure and managed to snag him for $13. which was a great price for him. 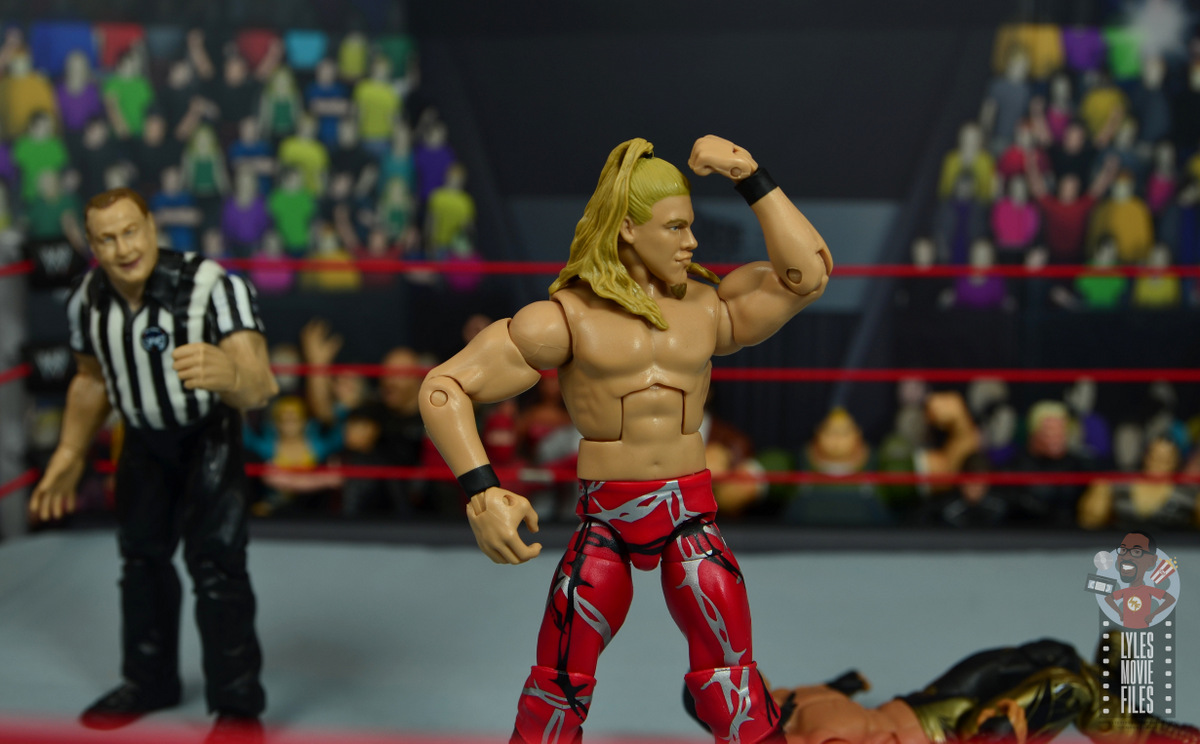 This isn’t the most exciting Jericho figure and definitely would have benefited from Mattel’s recent trend of using alternate head sculpts. Still this is a very solid early WWF run Jericho. 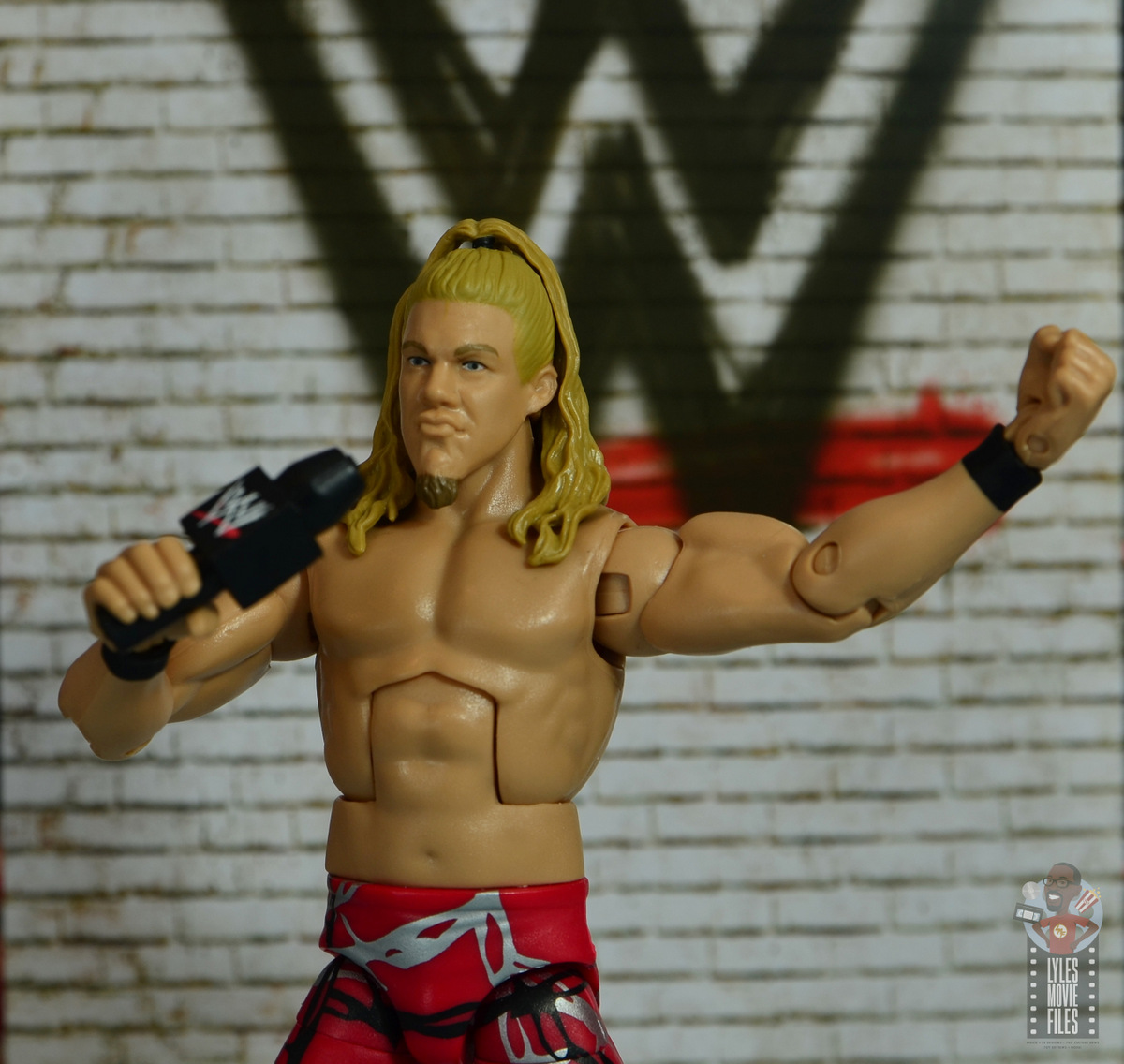