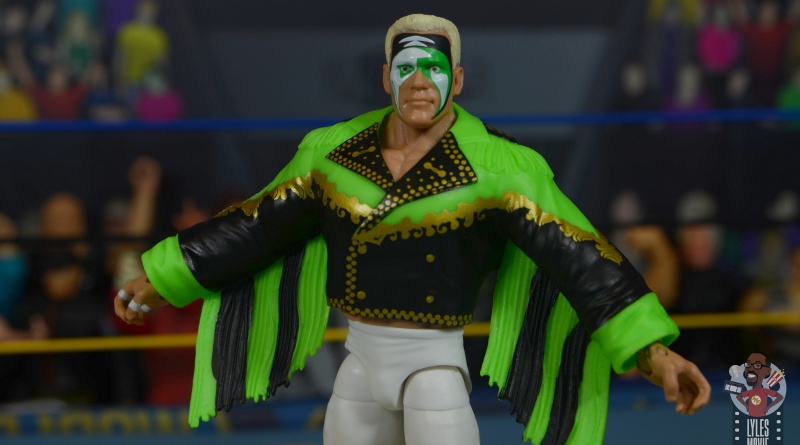 It’s seemed as if Mattel had a conspiracy against Sting for a long time. Outside of the tremendous Defining Moments and exclusive Wolfpac version, Mattel has botched most of the other Sting figures. Due to some lineup rearranging, Mattel finally released a figure that seem poised to make Surfer Sting collectors happy.

Of course with Sting’s WWE Legends’ status in limbo, it might be awhile before we get another crack at him.  Let’s see how if the Elite 62 Sting figure makes me wanna howl or stop talking for a year and a half.

Packaging:  There are no big changes from the ongoing Elite package set up, which is fine since this is one of Mattel’s better color schemes. The inset packaging dark blue showcases the figure nicely and the white and red accents pop. I don’t love the side portrait art as it’s more bad Photoshop, but trying to find a quality reference pic could actually have been challenging.

I really like the back package art as it shows Sting in all of his Surfer Sting glory. Maybe it’s due to them not having the super HD glossy presentation, but the Flashbacks look very cool with the more aged photo on the back.

The bio covers Sting’s main accomplishments and his 1991 Great American Bash Russian Chain match against Nikita Koloff. Ironically, Koloff is one of the biggest names left for a NWA/WCW collection. 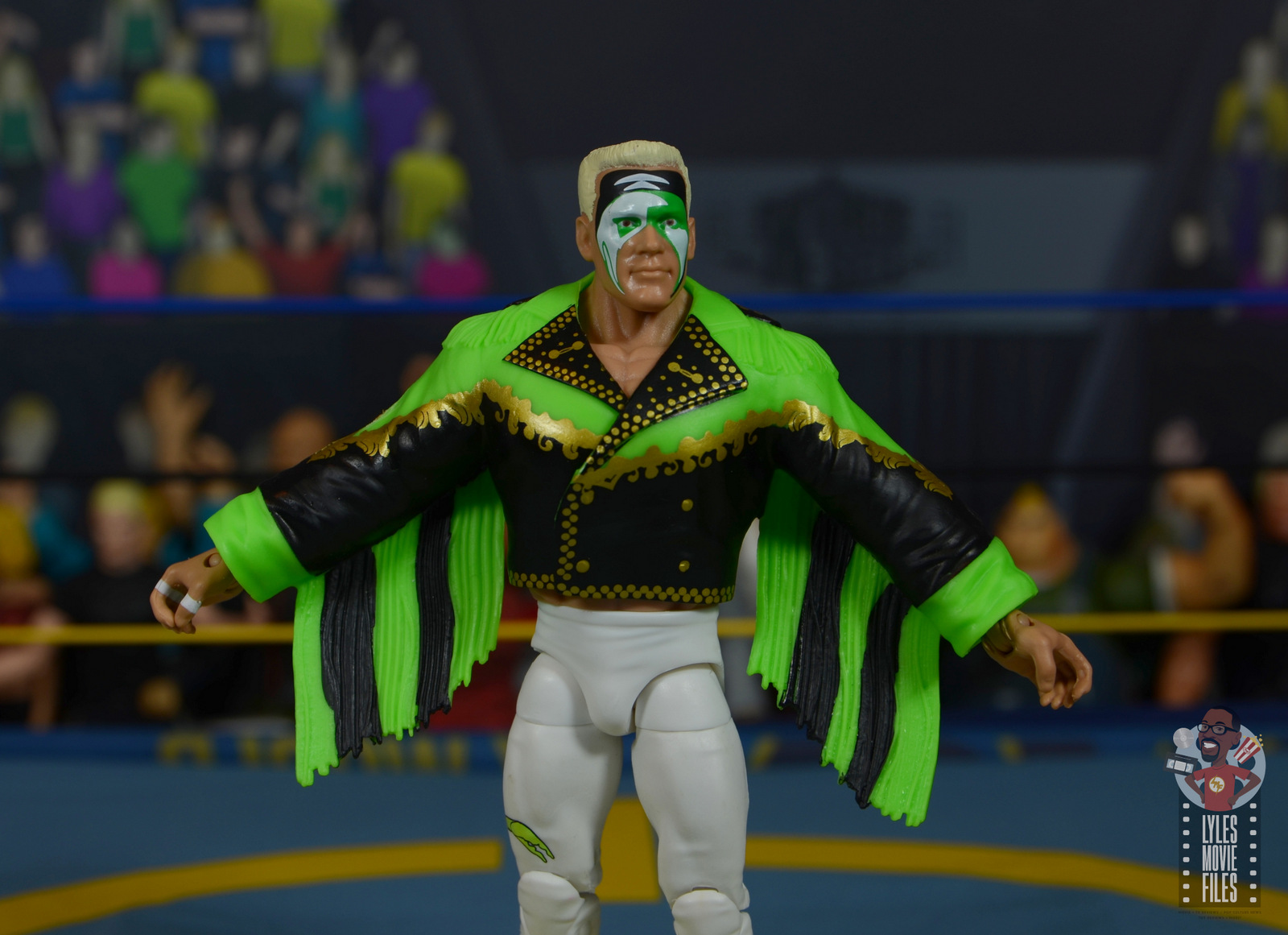 Likeness:  OK if we’re being sticklers, Sting was still experimenting with his hair in 1991. At that point, he had the sides shaved. But I don’t think Mattel needs to be that specific for Sting figures — we needed a generic Surfer Sting to battle our 1990-1995 WCW roster. Hey Mattel, let’s get some more figures for the 1990-1995 WCW roster while you’re at it.

Mattel reused the excellent head sculpt from the latest Basic figure. Unless they want to be more era specific with hairstyles like the rat tail and shaved heads, there’s no need to ever change from this one. It’s a massive upgrade from the awful original Surfer Sting head sculpt, which was too big and had a terrible expression. 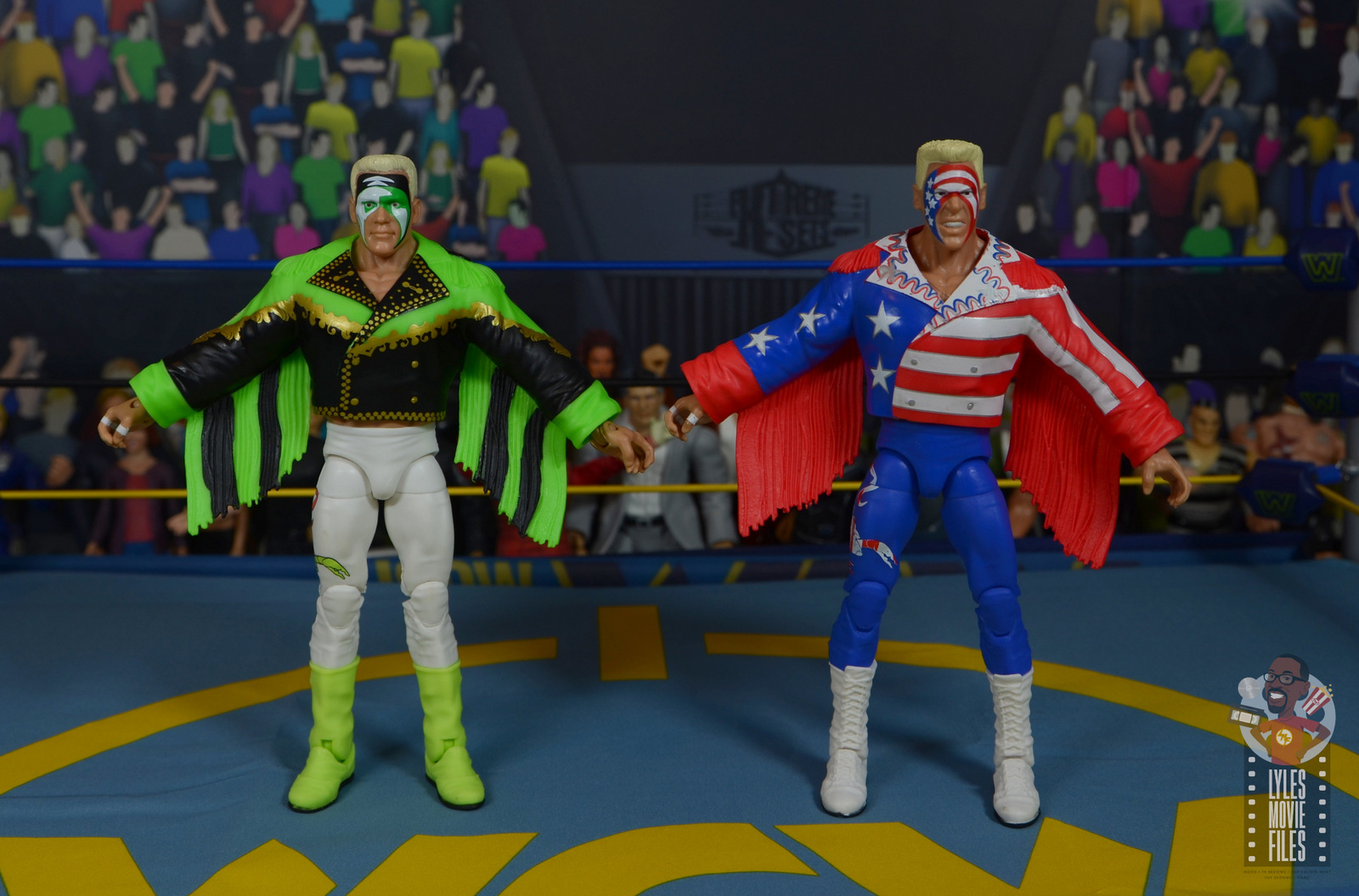 While Mattel fixed the head sculpt problem, some of the legacy Surfer Sting issues remain namely the questionable choice to use the Batista torso. The British Bulldog one still is the best option and most fitting choice yet Mattel keeps selecting the wrong torso.

Sting’s legs are also thinner than they should be, but that’s a common problem with Elite figures. The boots are accurate though so things end on a positive note. 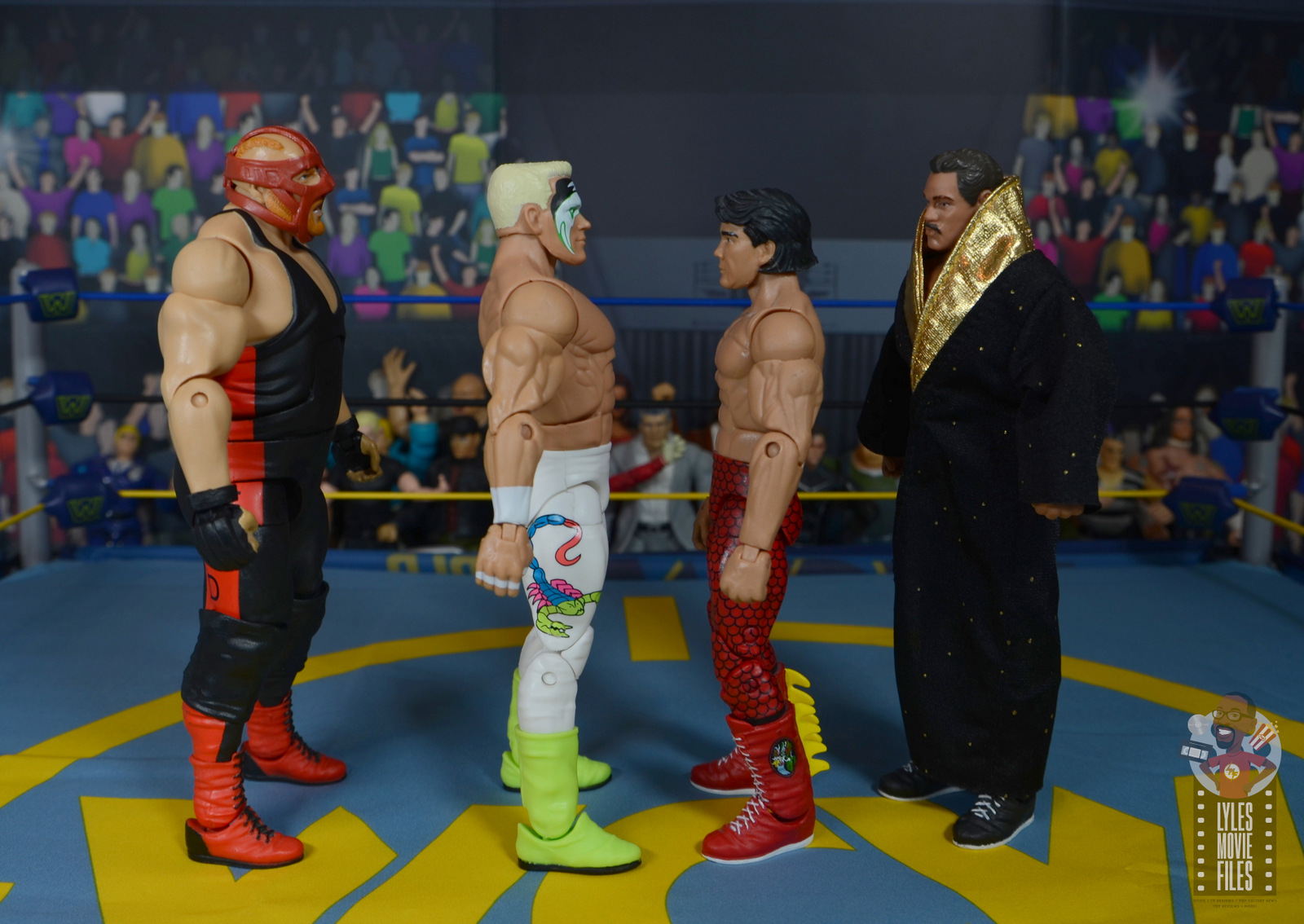 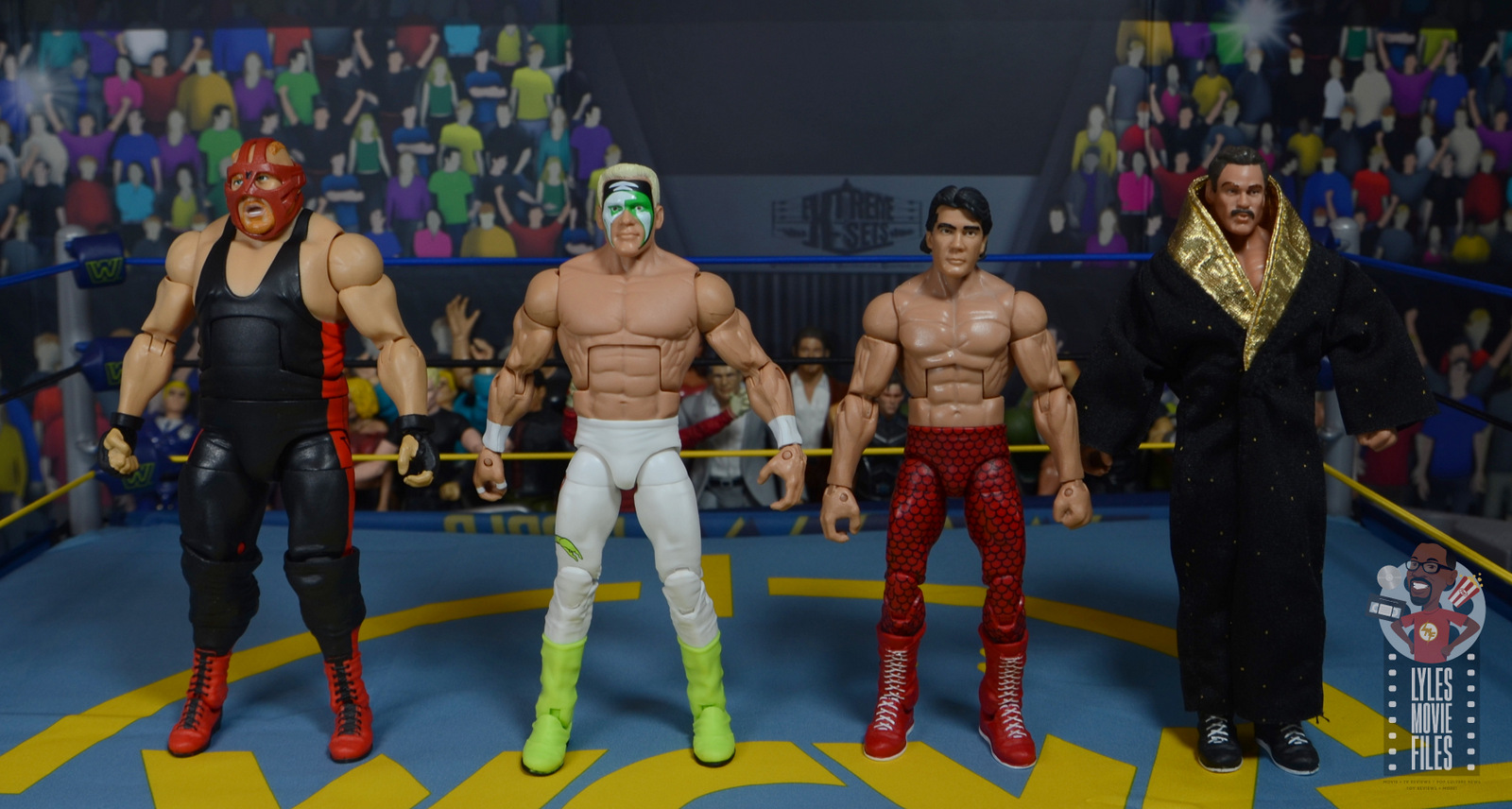 Paint:  One of the best traits of Surfer Sting was his colorful costumes. You never quite knew what color combinations he’d wear to the ring. While this color scheme wasn’t my top choice, it perfectly captures the lighter, brighter version of the character with the multicolored scorpion, white tights and yellow green boots. 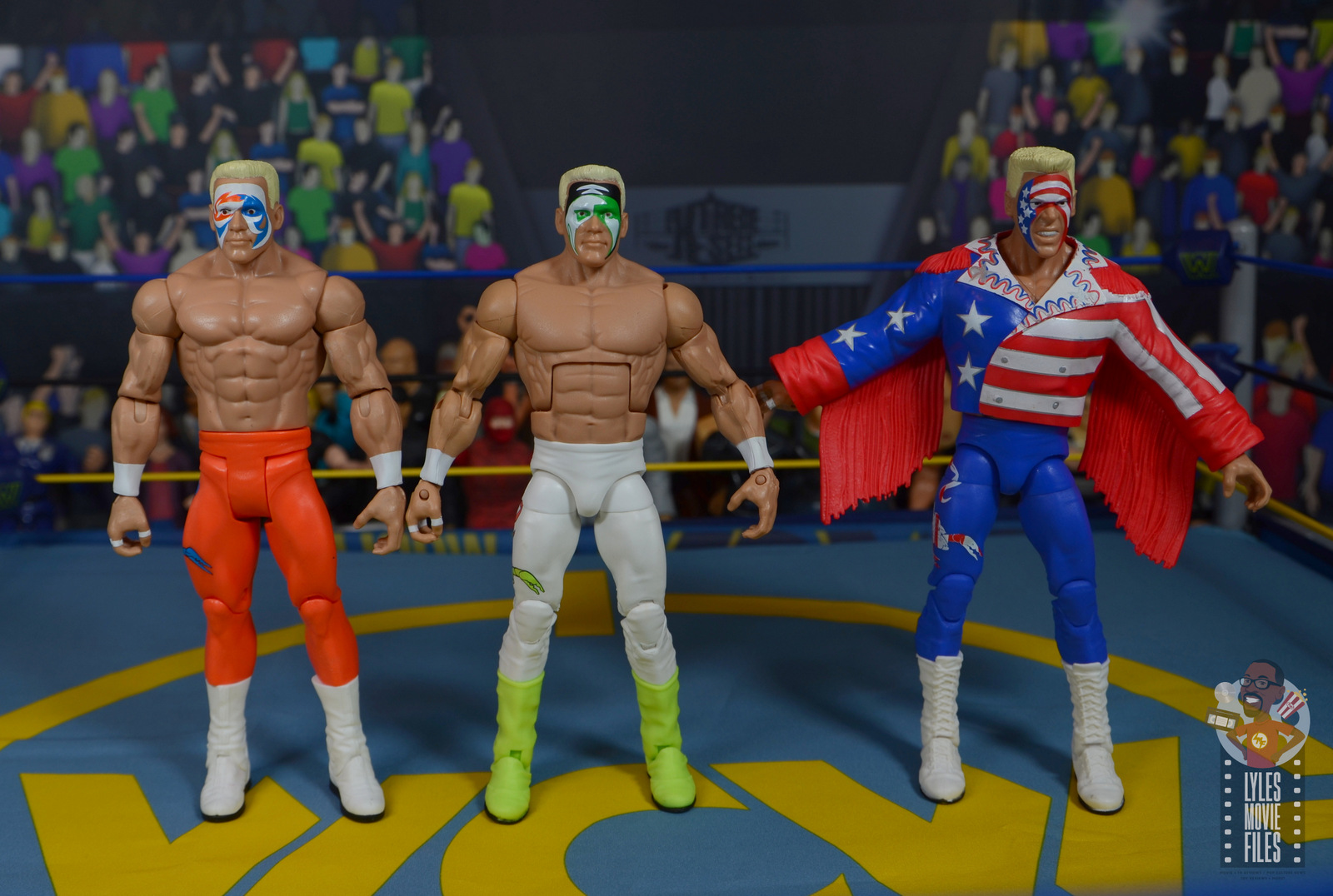 You’re rarely going to hear me complain about the paint job on a Mattel figure and that won’t change here. Even with the multi-color approach on the scorpion, there are no issues with the color transitions. It seems like Mattel got the right mix for the boots, which probably was tricky. 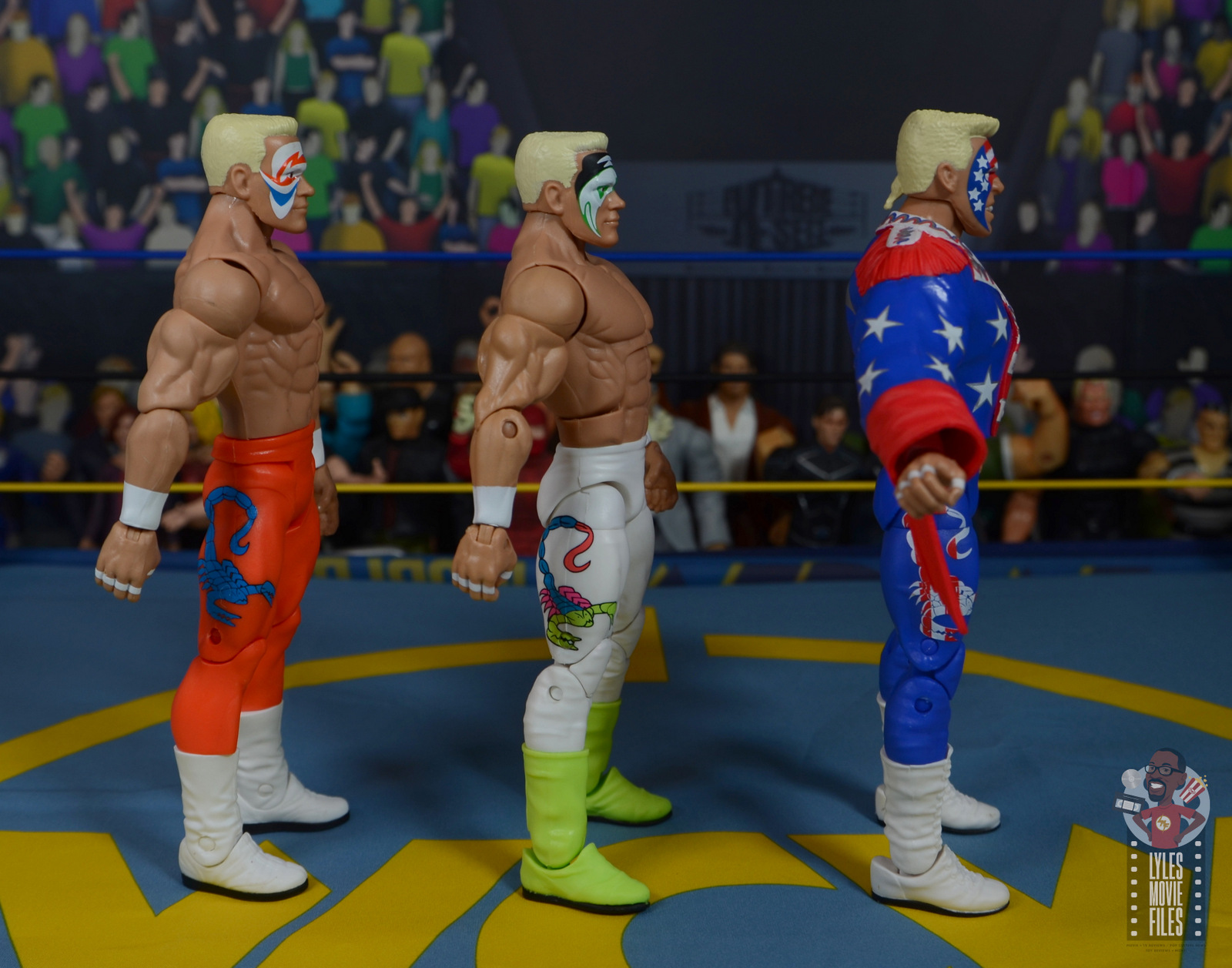 The face paint is the one place where the paint isn’t perfect, but it’s due to the layers and the trouble with getting white to apply properly.

Articulation:  The main problem with the Batista torso is that it’s too thick and wide for the arms to come down. While that works for Batista, it’s not at all appropriate for Sting. 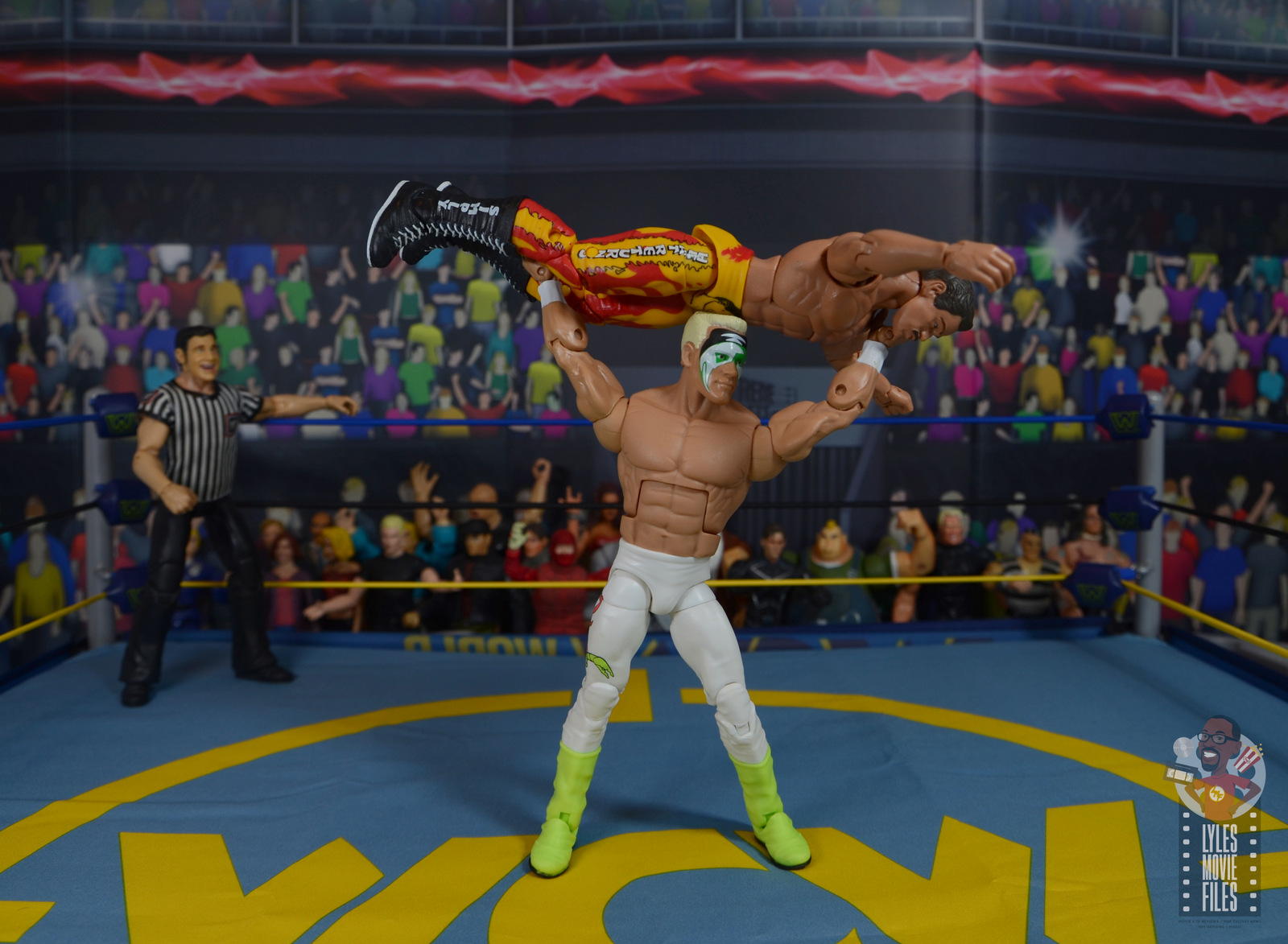 This torso also makes signature Surfer Sting moves like the Scorpion Deathlok more complicated to pull off than necessary. 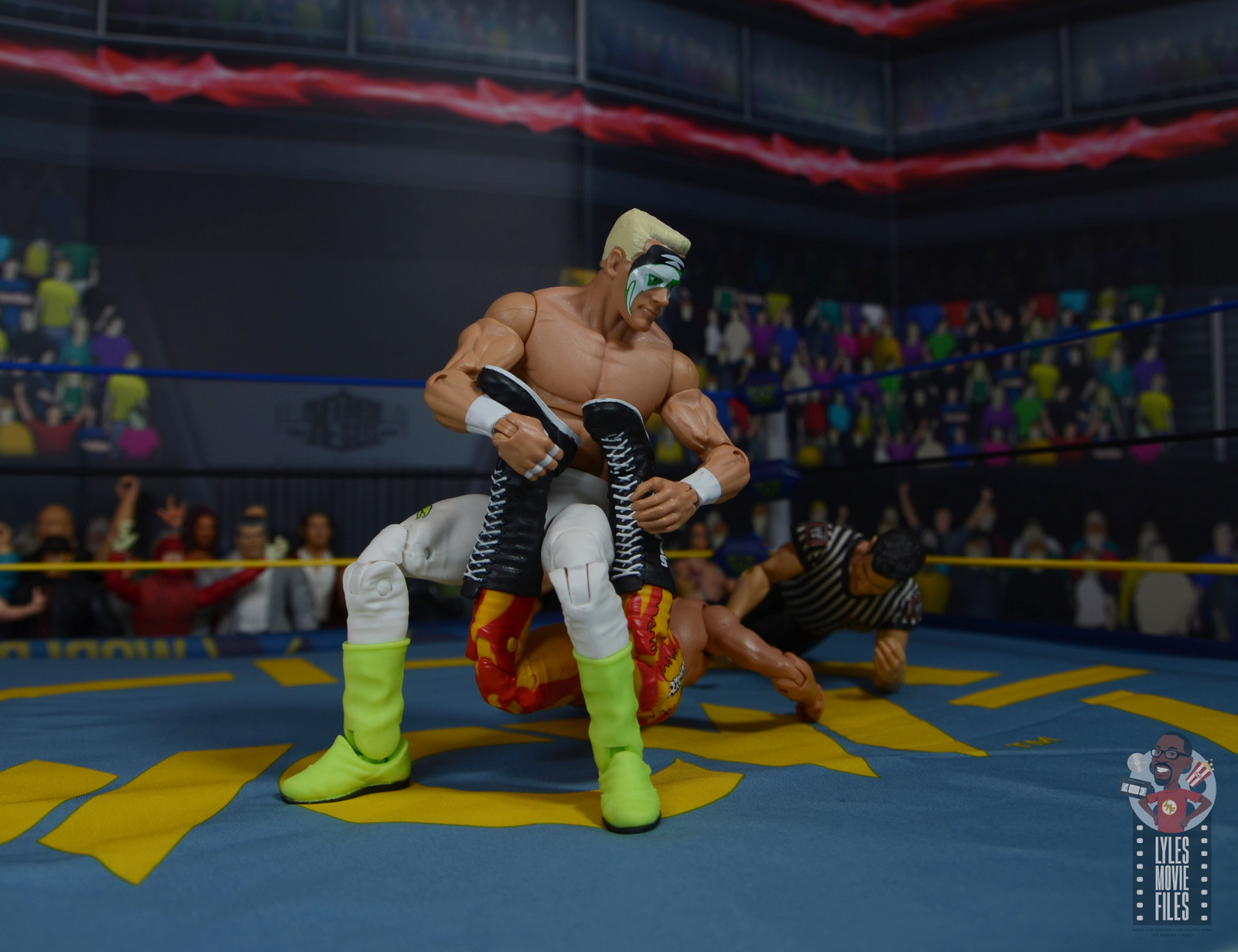 Honestly, this is one torso Mattel probably just needs to retire it for good instead of compromising figures for the sake of keeping it in rotation. 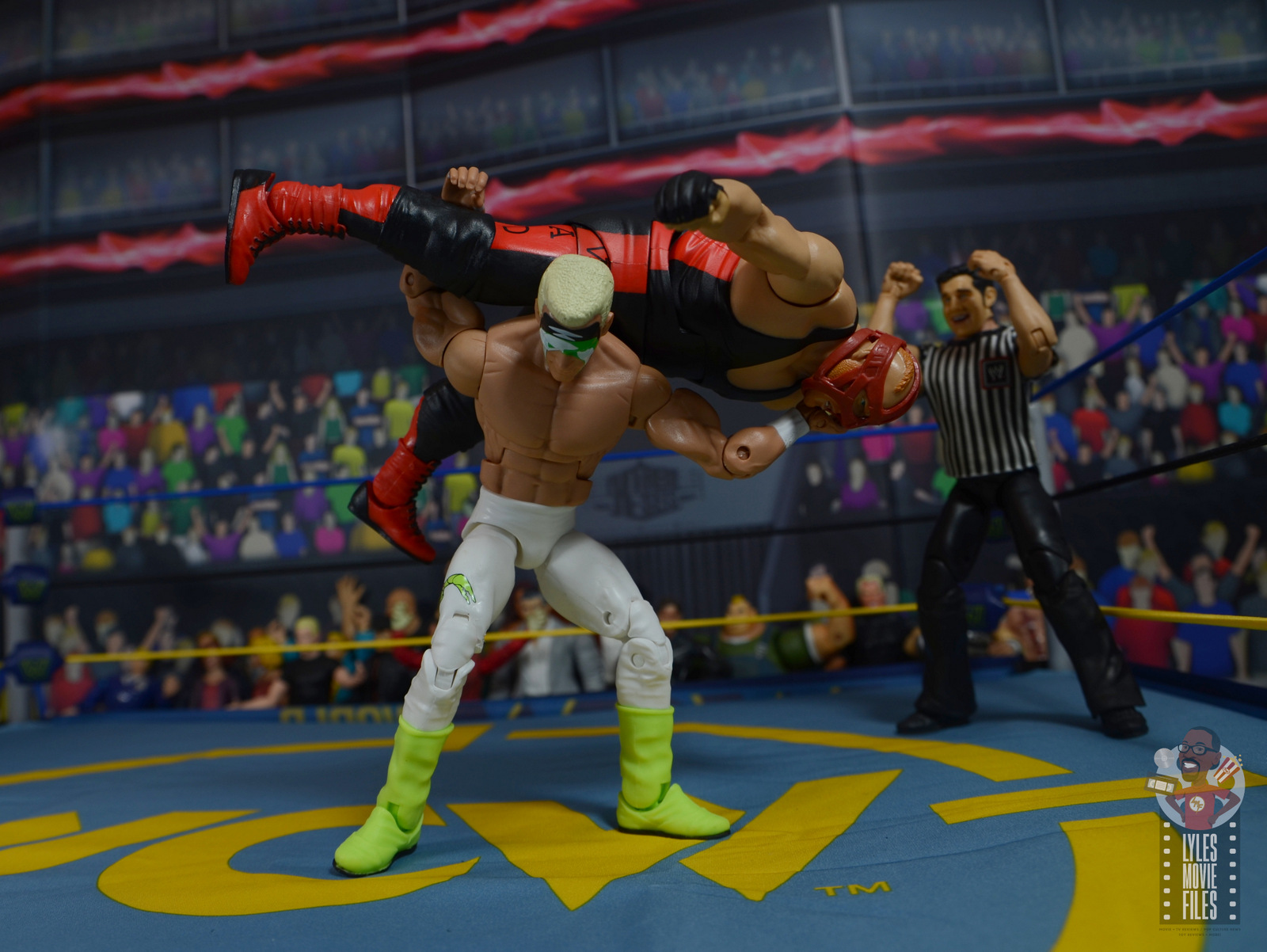 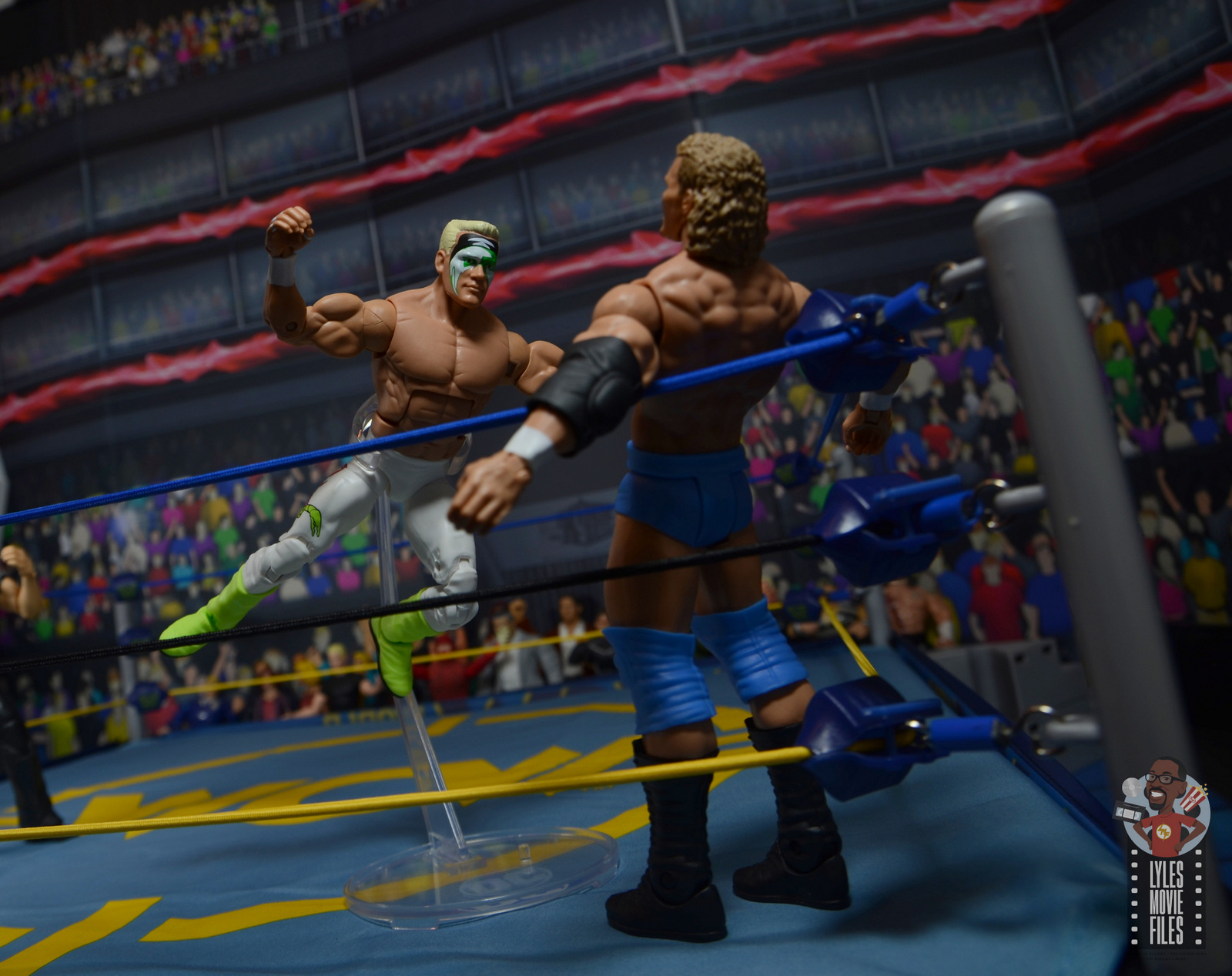 Accessories:  Elite 62 Sting has everything that makes sense for the character even if the execution is lacking. Once again Mattel is using that thick plastic jacket that’s so hard that it’s stuck in the outstretched arm position. 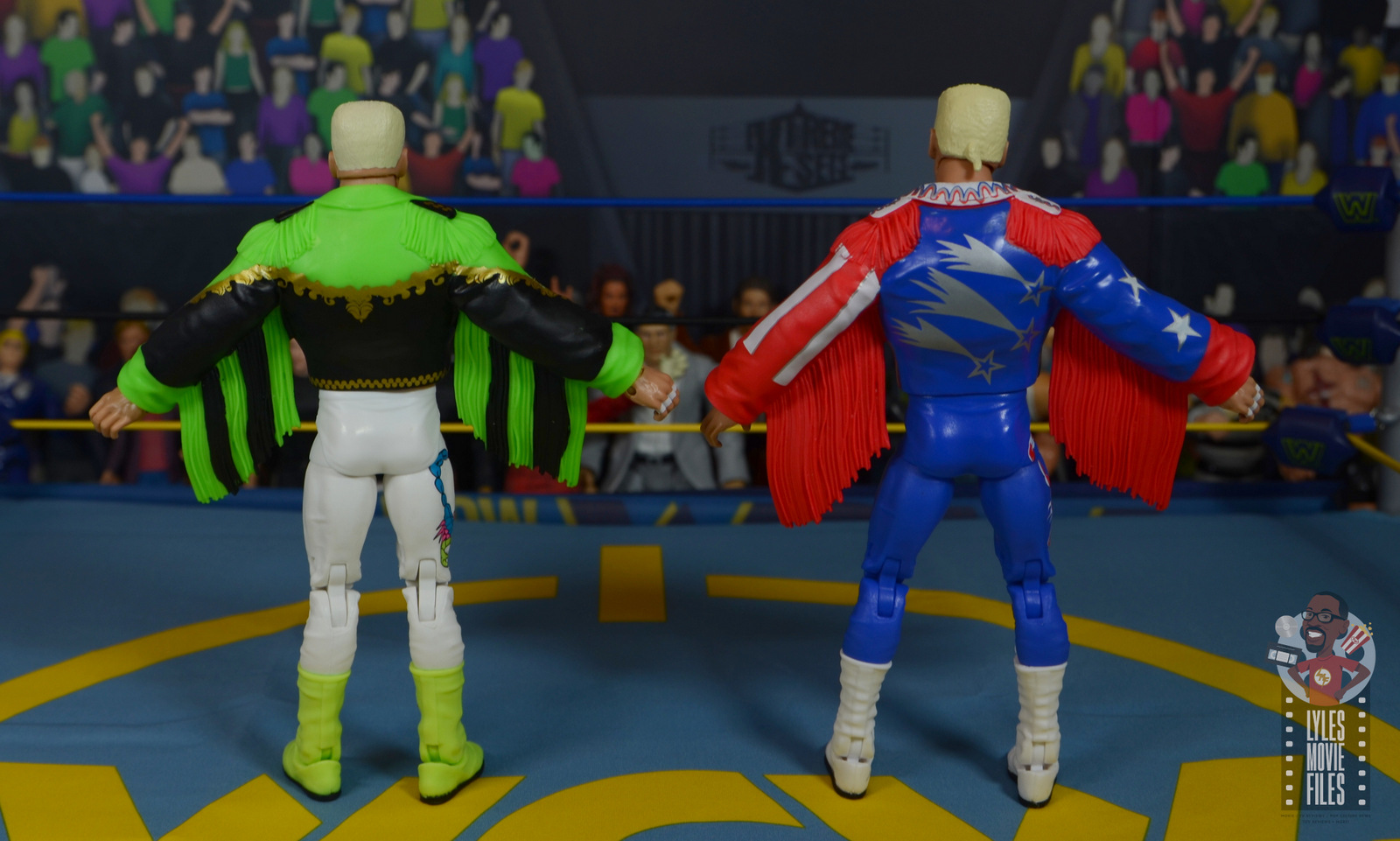 The paintjob is very nicely done and it’s Mattel’s main reason for using this material, but I’d much rather have this done in cloth to be able to pose Sting wearing his jacket. It’s also a major pain to remove.

He also comes with a NWA world title. Most folks probably have several at this point, but it’s nice to have the option. 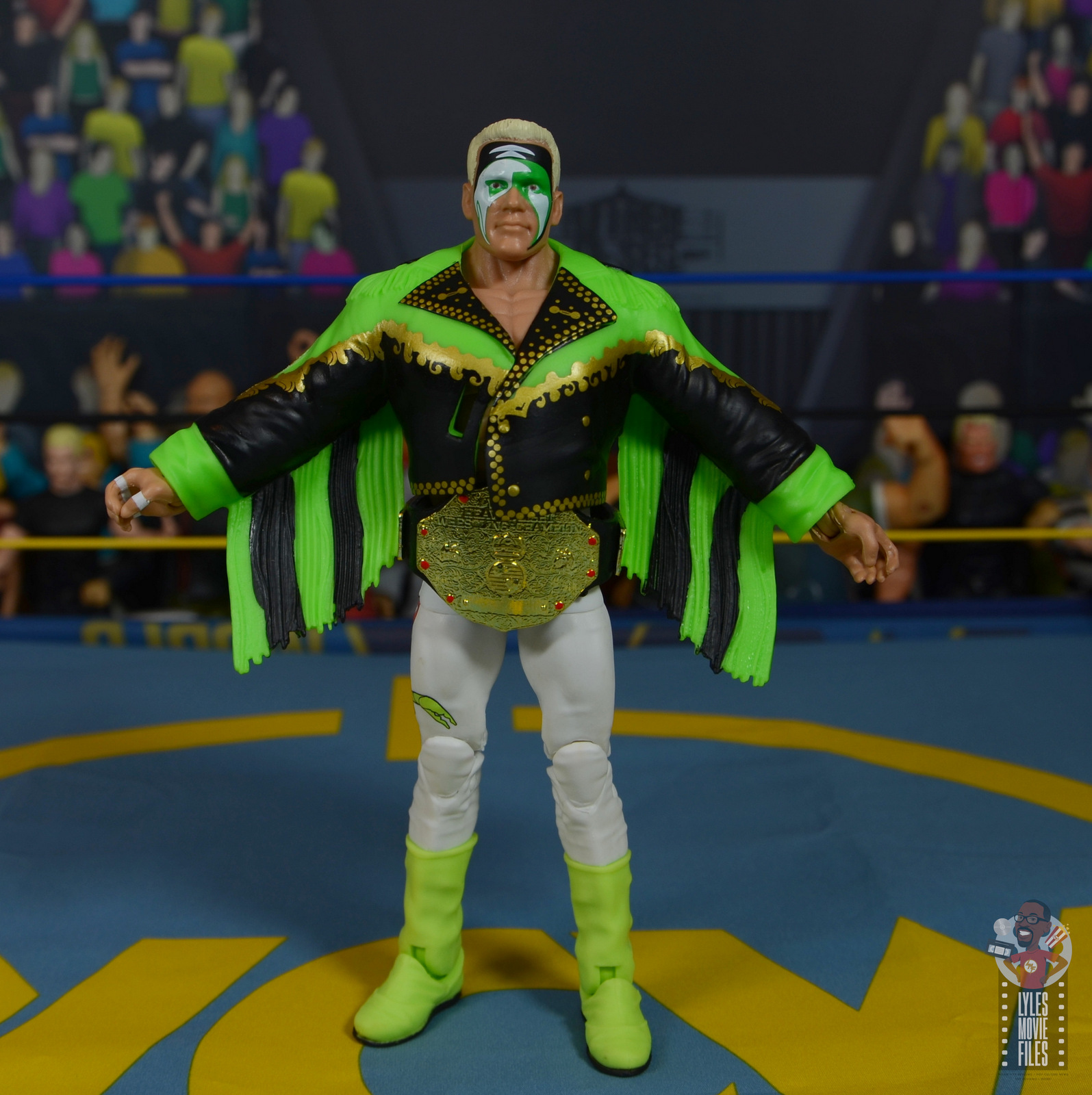 Finally, Elite 62 Sting comes with a piece of art from the Rob Schamberger display. These are much better than the dioramas and at least look cool. 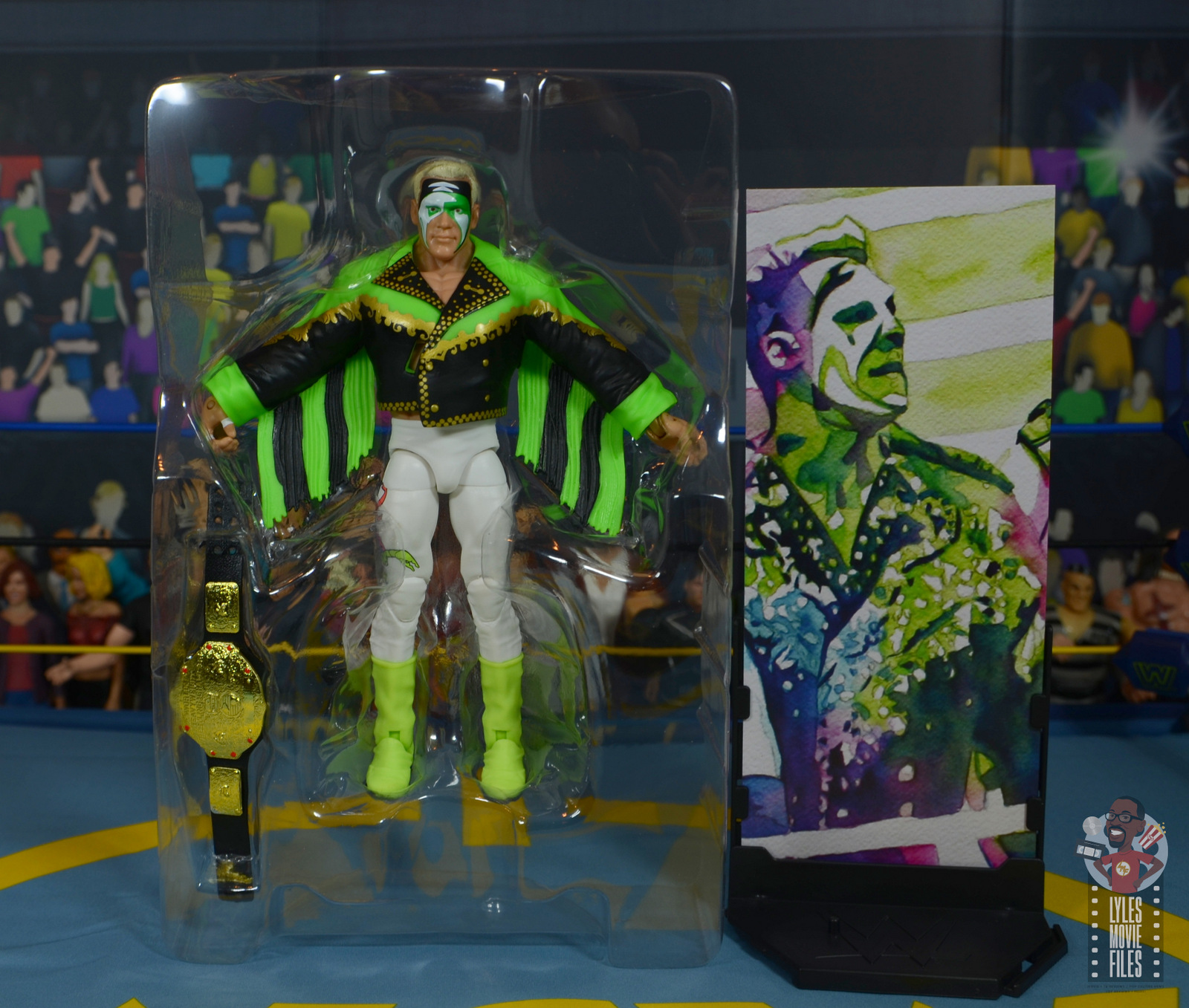 Worth it?  I got Sting for $20. While I could wait a few months for him to drop in price, I couldn’t wait for a better version of Sting. But, if I were a betting man, I’d wager he’ll see a significant price reduction by March.

Despite the bad torso choice and bulky jacket, collectors finally have a decent Surfer Sting for their collection. Hopefully Mattel will be able to get to more Elite Sting figures in the future. 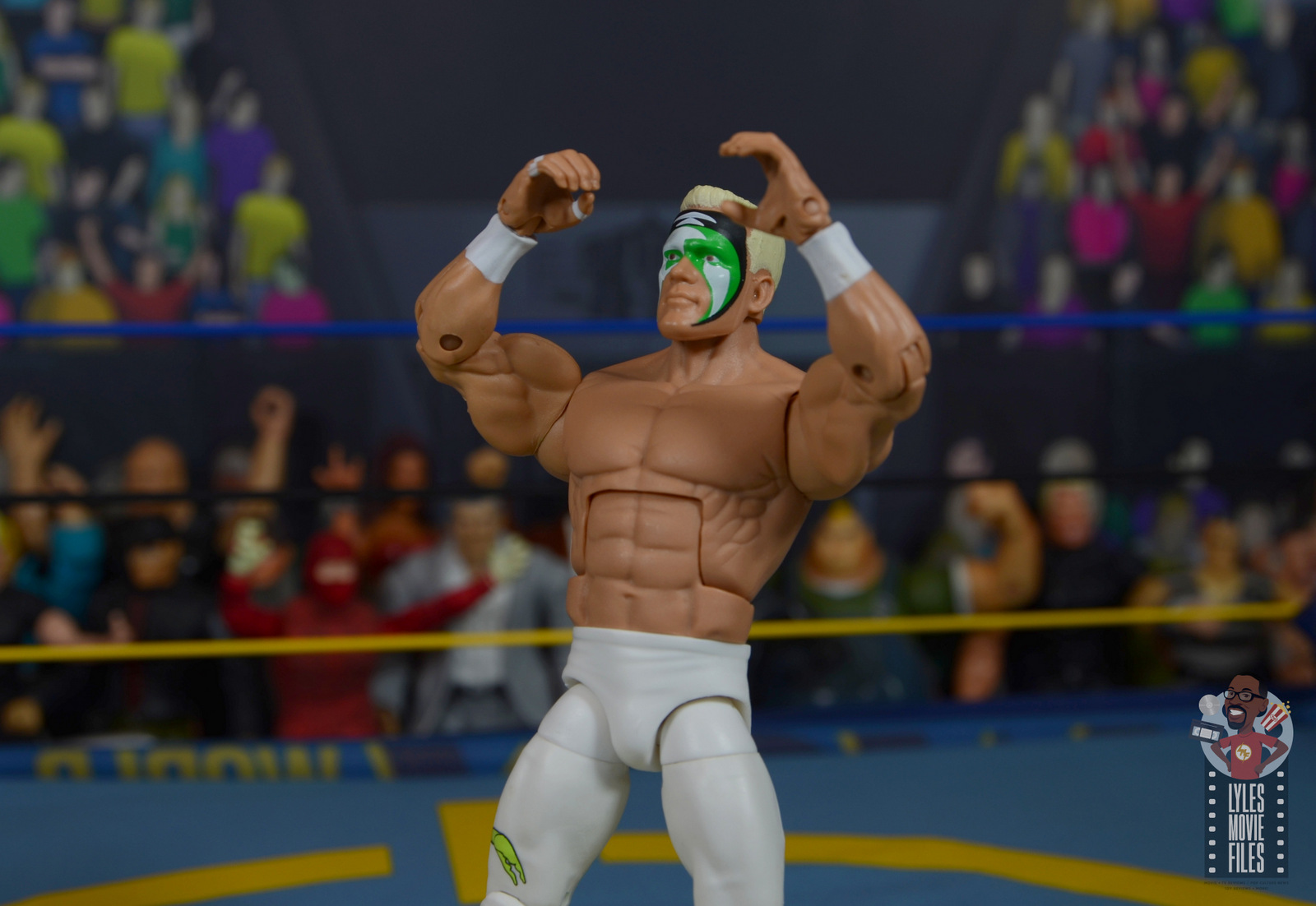 Where to get it?  You can find Elite 62 Sting right now at Amazon.com. Retail is very far behind at this point so if you’re impatient this is basically the only option.