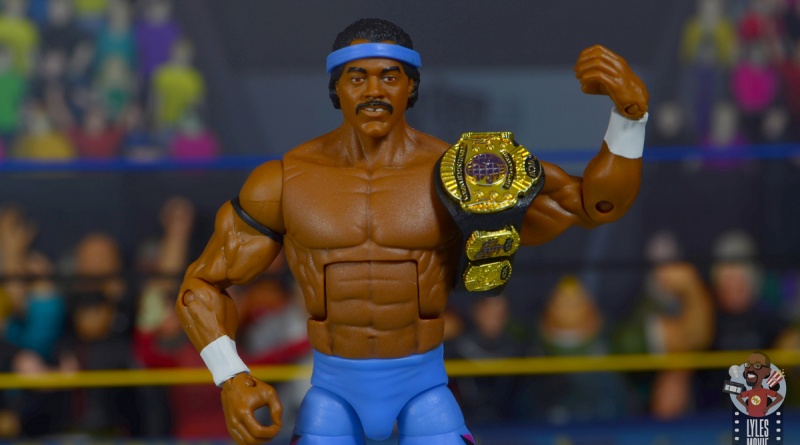 It’s taken Mattel three cracks, but they’ve finally made a truly great Ron Simmons figure. That’s important timing as the Hall of Champions Ron Simmons figure captures the man too many know for his one word catchphrase at the biggest moment of his career.

There’s been very few times I’ve been more excited as a wrestling fan than when the commercial for WCW Saturday Night showed clips of Ron Simmons beating Big Van Vader for the WCW title. It was more than just a simple match as for the first time a guy with my skin color was the world champion. Given Mattel’s track record for Simmons’ figures, I was bracing for the worst, but we get a fitting WCW World Champion version that finally does right by Simmons.

Packaging:  Mattel did a very soft reboot of its Hall of Fame line to rebrand it Hall of Champions. This makes trying to describe it to helpful employees very challenging especially with HOF figures still on the shelves. It’s easy to see why Mattel wasn’t so quick to abandon this packaging format as it’s some of their best work.

The blue, gold and white makes for a striking color combination. I really like the package insert with the various titles in the WWE library. Unlike the drawings/renders in other lines, Mattel used actual photographs. I like that choice as it shows the exact look they were going for with each figure. Though it seems kinda funny that none of the figures are pictured wearing their respective title. 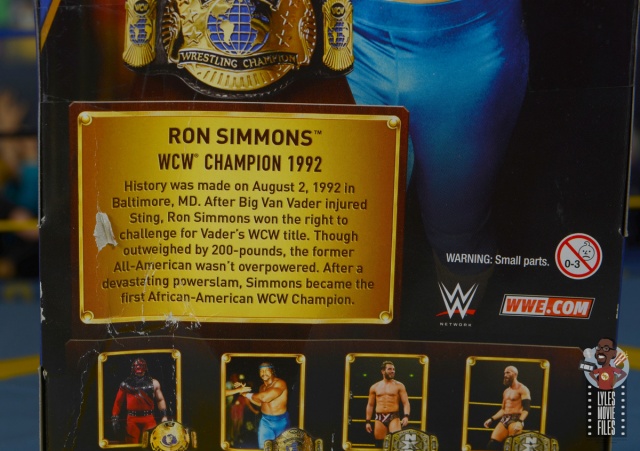 Continuing the trend, the HOC bio is far more comprehensive than the regular Elite figures. It explains the importance of the figure’s look with regards to this defining moment.

Likeness:  Mattel has done a pretty decent job nailing Simmons’ likeness in the various stages of his career. I really appreciate that they didn’t try and retrofit an older head sculpt and pass it off as good enough. 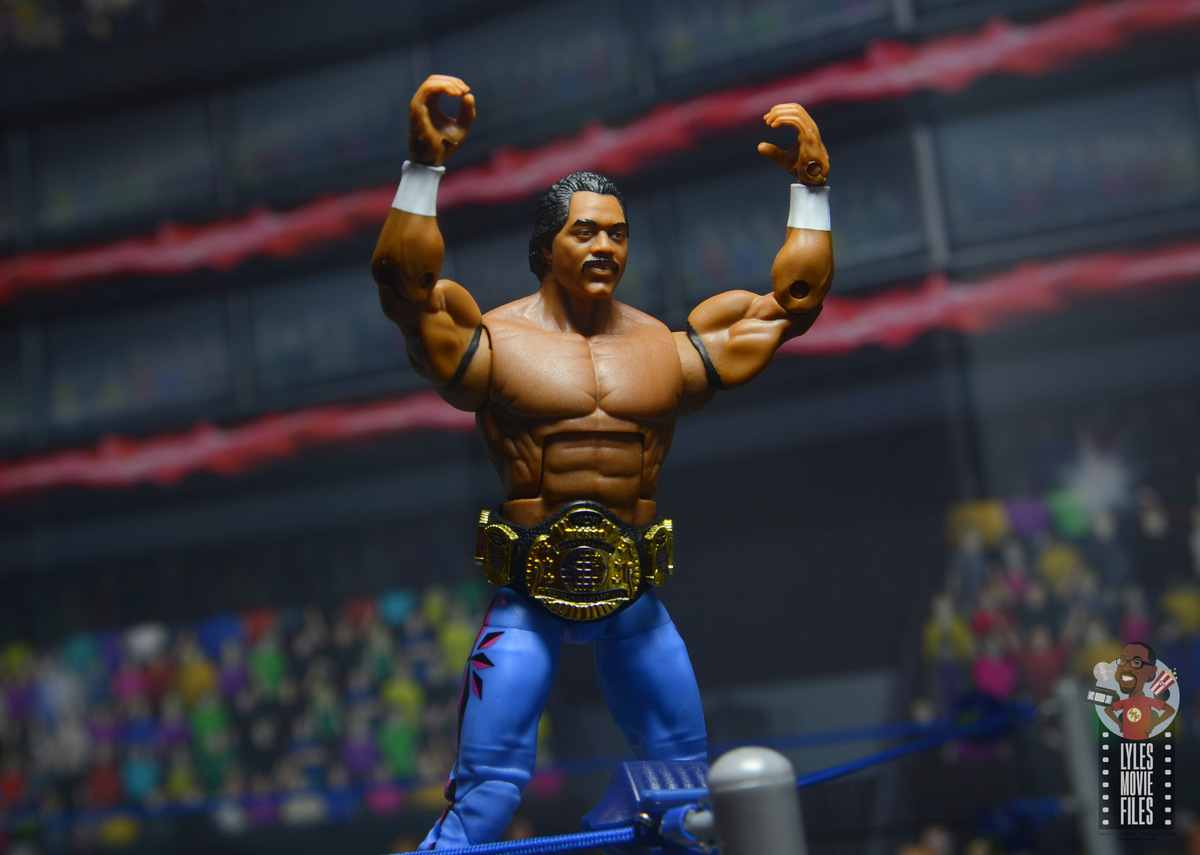 This head sculpt sports a tremendous early 90s Simmons likeness with the right style of hair texture and mustache. They even got the gap between his front teeth! I like how different each Simmons figure is from the other. A big controversy with this figure early on was the size. Initially, Mattel showed a Simmons with a smaller torso like we’ve seen on figures like Arn Anderson. Simmons was never that slight and had more of a powerhouse build.

In a rare case of fixing a mistake, Mattel actually swapped the torso out and replaced it with a Batista torso. That’s a much more accurate fit for Simmons and I’m so glad Mattel made that correction. 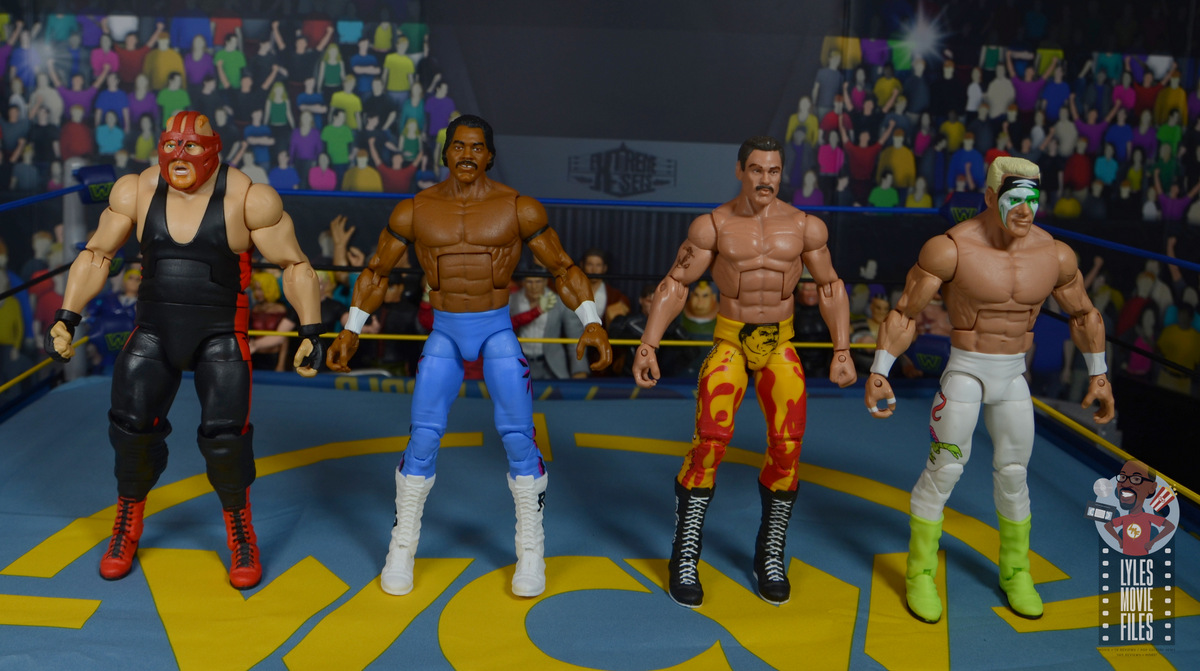 Scale:  Simmons was 6’2” putting him three inches shorter than Big Van Vader and the same height as Sting and Cactus Jack.  Simmons is a bit too tall, but I don’t mind it so much in his case. 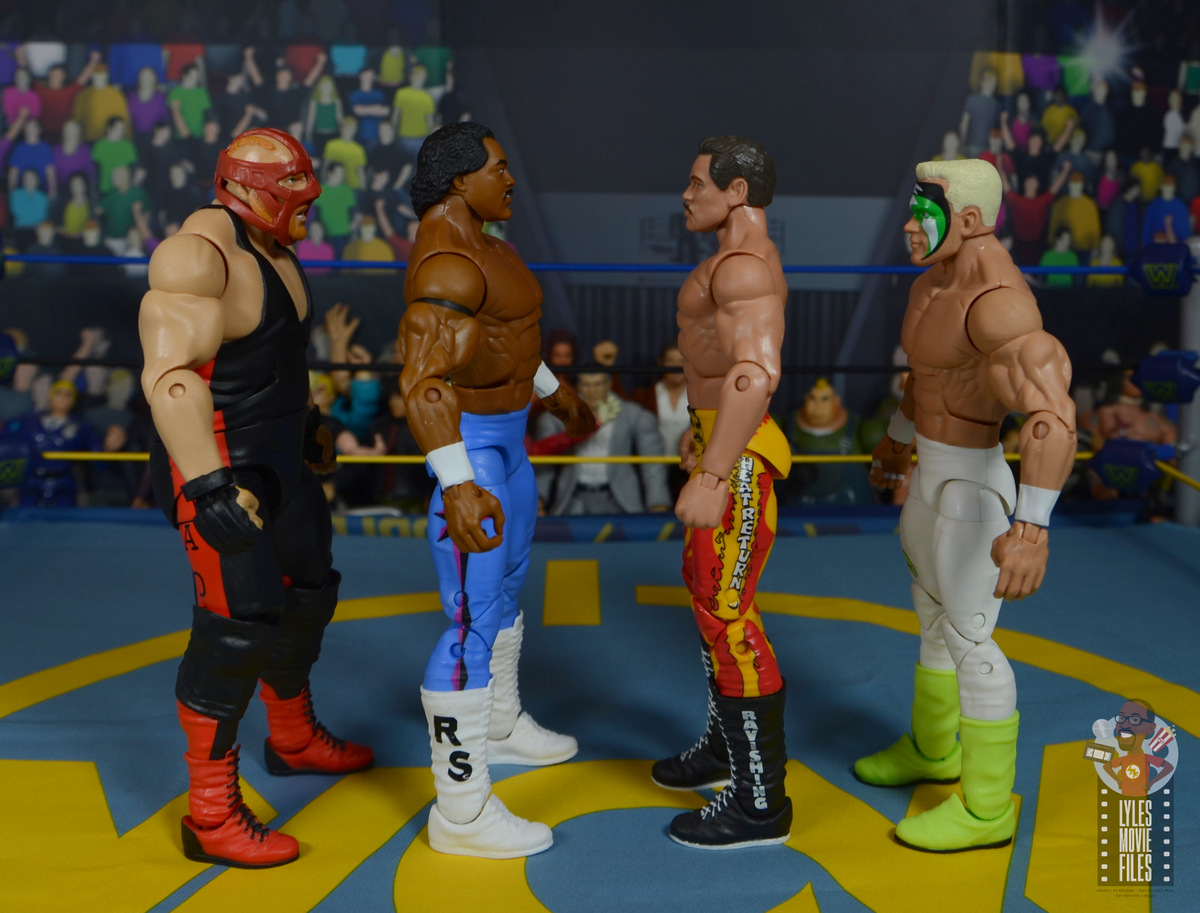 Paint:  I shouldn’t be so excited about this, but Mattel FINALLY got Simmons’ skin tone right. For some inexplicable reason, Mattel kept giving his figures a darker skin tone. This time, Mattel gets it correct. That won’t help with the Nation of Domination and APA versions, but hopefully Mattel will re-release those figures with the correct skin tone at some point in the future.

Simmons wore purple tights when he beat Vader, but given Mattel’s struggles in correctly painting purple, I’m fine that they went with the light blue tights. That color is perfect as well and there are no issues with the logo on the side or the RS on the boots.

Articulation:  One of the trade-offs with using this Batista torso is the shoulders don’t allow the arms to come down too close to the sides. That’s more of a problem for the upcoming Sting figure than Simmons as he typically flexed like the packaged position.  The torso doesn’t hinder getting any of Simmons’ moveset including the spin buster and powerslam. 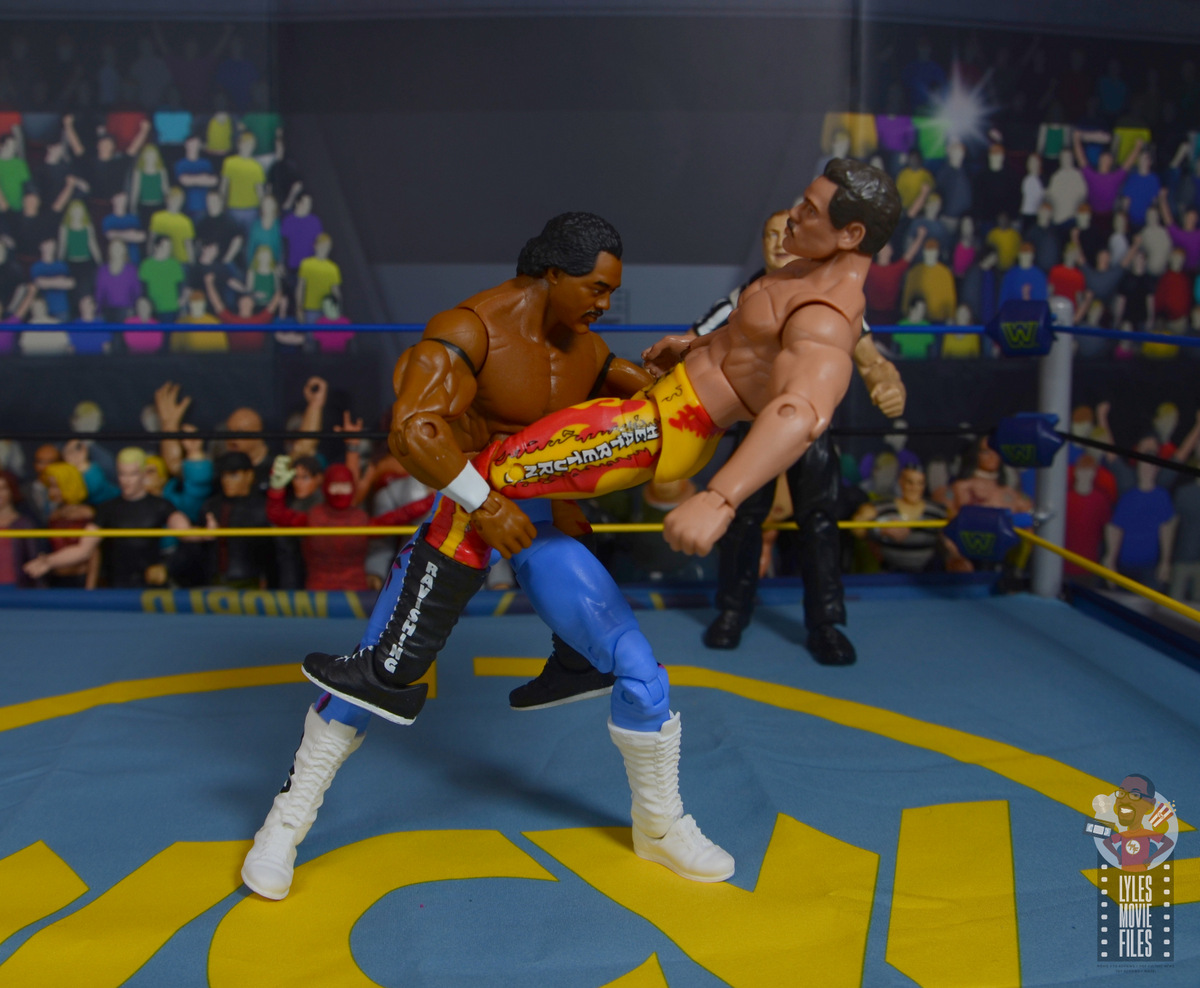 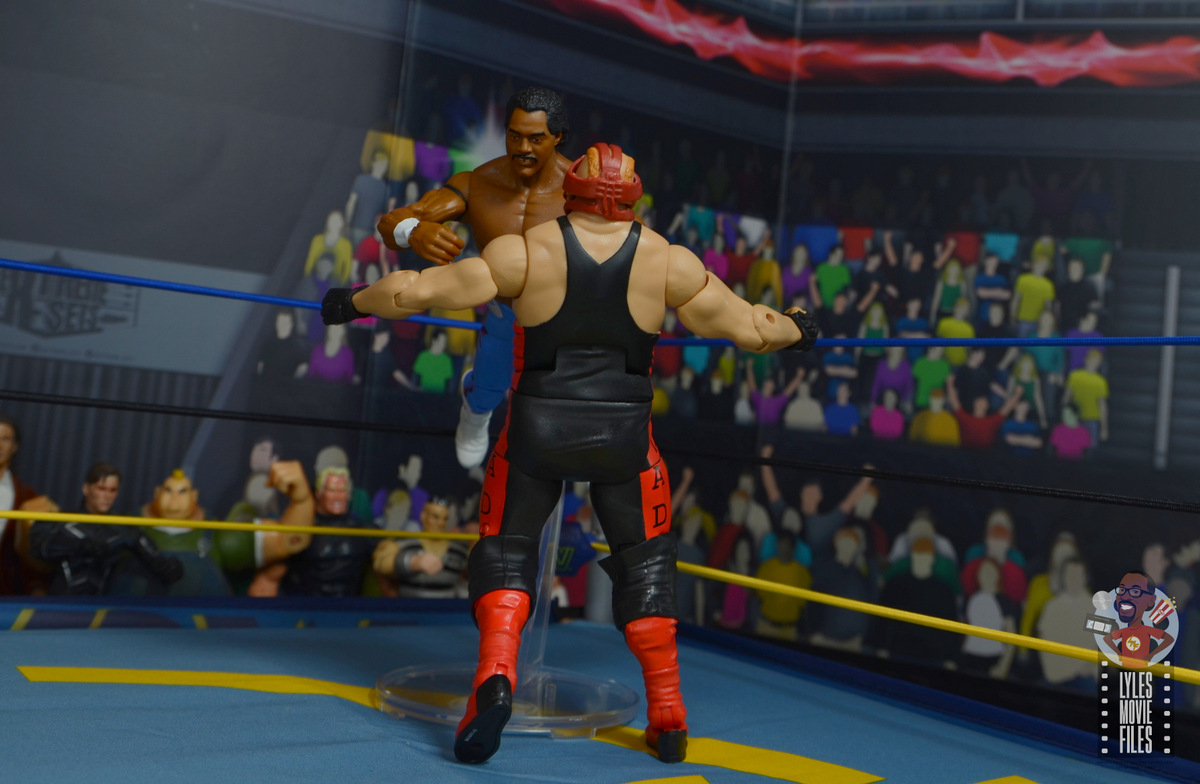 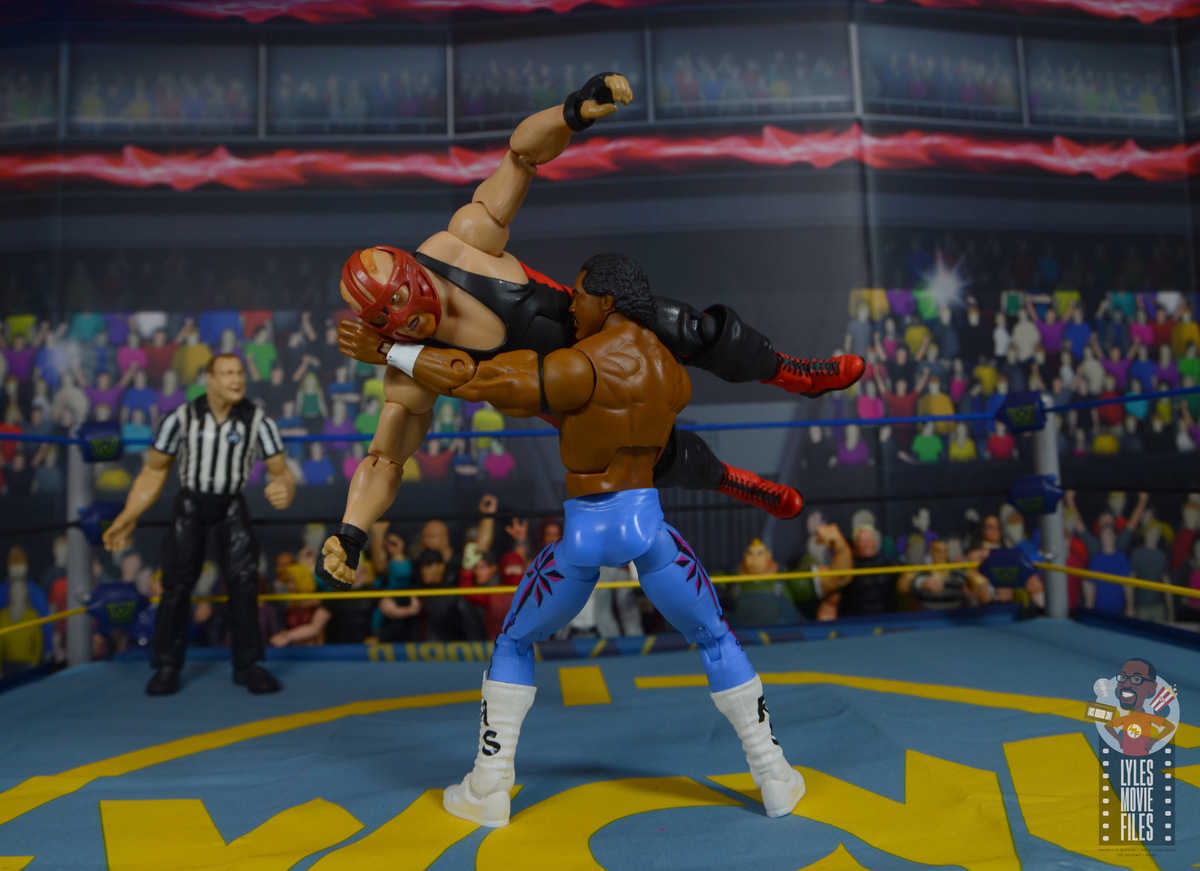 Accessories:  The Hall of Champions line isn’t intended to have a ton of accessories. Simmons wouldn’t necessarily have a lot of options anyway, but it’s kind of funny that his headband is prominently touted as an accessory. 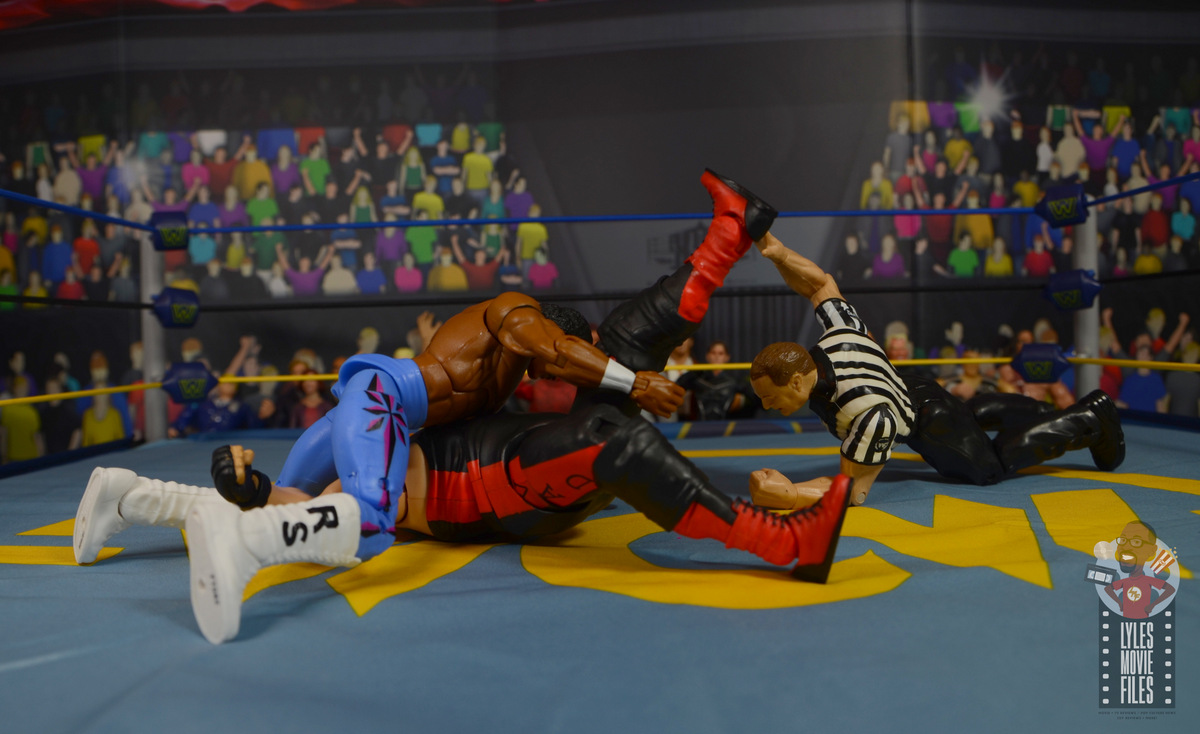 No, the real prize here is the first ever Mattel WCW 90s era title. This would be the title belt worn by Lex Luger, Sting, Vader and Ric Flair before Hulk Hogan’s arrival in 1994. This is an important and necessary belt to add to the collection and it looks terrific. 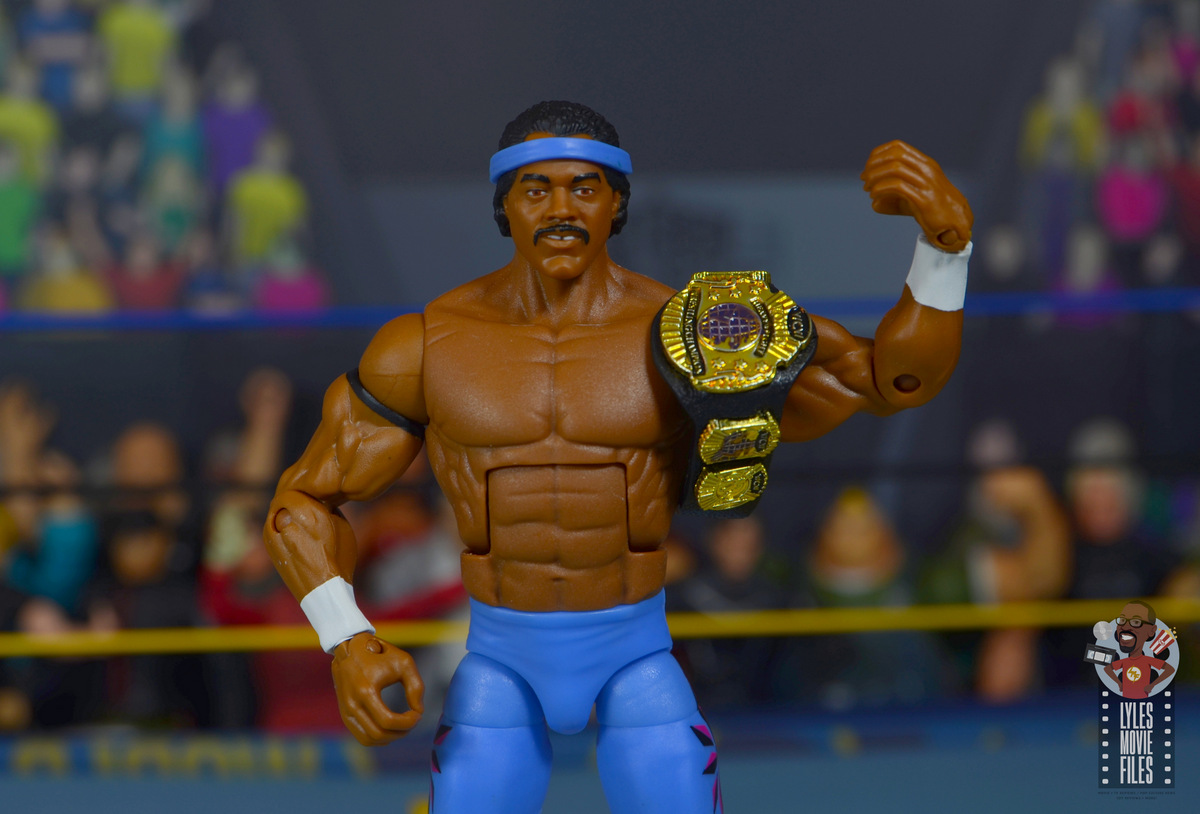 Worth it?  I picked up Simmons for $20. That’s the standard WWE Elite figure price so no surprise there on that end. With no Build a Figure parts the Mattel line isn’t as great a value as Marvel Legends or DC Multiverse, which puts more emphasis on the likeness and accessories. Simmons probably could have used a chair or something else, but I’m not stinging over the cost.

Mattel got the Hall of Champions Ron Simmons figure right on every level. This is exactly what I wanted and they did an excellent job for it. Now the big question is will I need to buy another one for a Doom era Simmons? 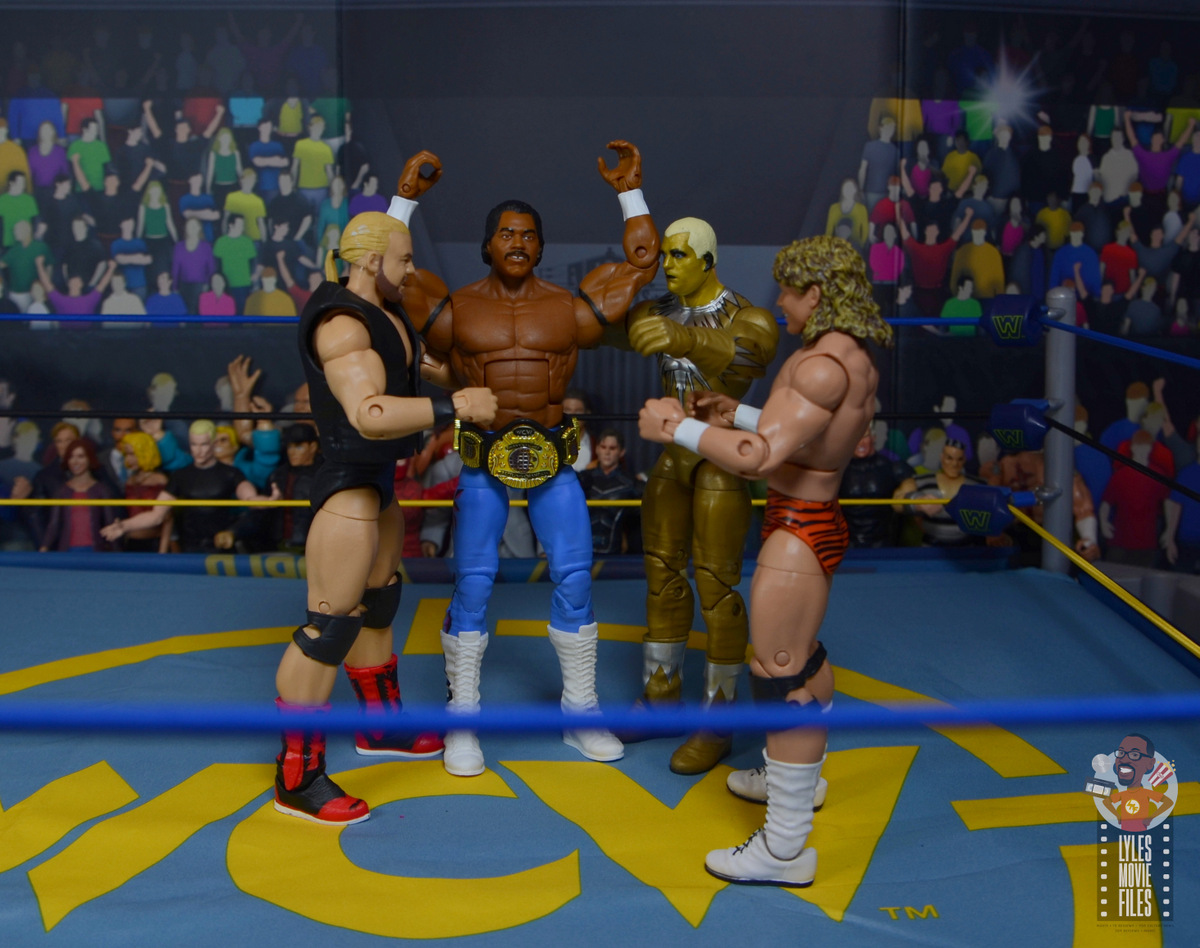 Where to get it?  The Hall of Champions figures were a Target exclusive that wasn’t very plentiful with its stocking meaning you’re gonna have to drastically overpay at this point from Amazon or eBay,