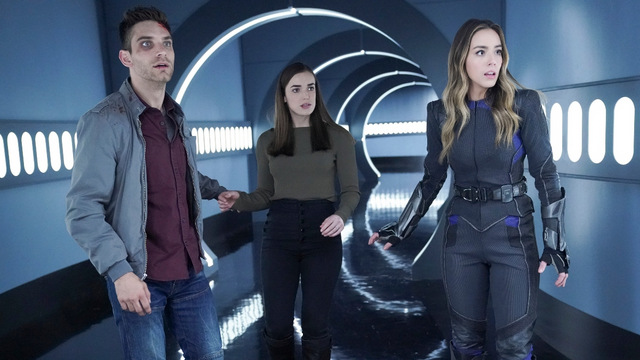 Alright to spread the SHIELD finale night out some I’m going to write Part 1 – The End Is at Hand before watching Part 2. Of course after watching Part 1, I’m already regretting that plan.

SHIELD is all over when the episode starts. Jemma and Deke are captive of Nathaniel Malick; Daisy, Mack and Sousa are in pursuit in space and Coulson, May and Yo Yo are at The Lighthouse.

One more sign of SHIELD ineptness/Hydra brilliance? Somehow the Lighthouse was the only SHIELD base that could withstand an external attack. That seems like something that would come in handy, no?

The Chronicoms’ obsession with finding Fitz seems superfluous at this point. They’ve wiped SHIELD out of existence. What is their grand plan again? Also going to another Earth really eliminates that pesky question of the lack of Avengers, Guardians of the Galaxy or even Doctor Strange to fight The Chronicoms. 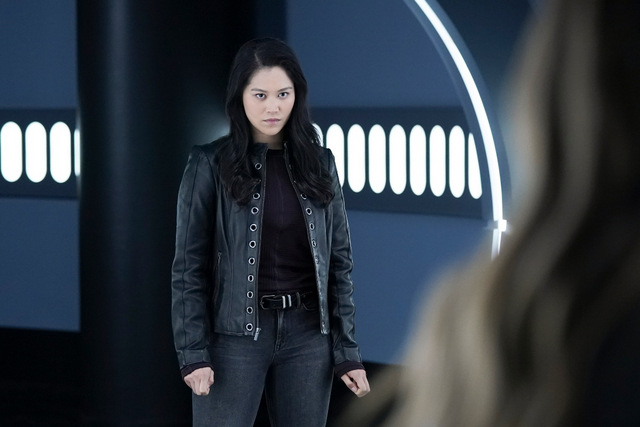 Aboard the Zephyr, Daisy leaves to find Jemma…and Deke, which becomes a fun running gag. Sousa stops her long enough to get a kiss, which impresses Mack. Great, now I want more Mack/Sousa scenes!

In her big face-off with little sis, Kora can’t fight Daisy and thinks she might not be bad. If only she could use those powers of deduction to realize that’s not the case with the guy who killed her mom. Never mind, Nate stuns her for ruining Sibyl’s plan to find Fitz.

Mack teaches Sousa the finer points of one problem at a time and a Sousa reciprocates by coming up with a plan to use the Chronicroms as missile warheads. Explosive!

The space team is reunited, but not without a cost as Sibyl injected a device in Jemma to destroy the implant. It’s not all that precise and started ruining her memory to the point she forgot everyone. Also, Deke does a pretty spot-on Fitz impersonation.

Nate sends Garrett down to destroy the Lighthouse for the clean sweep, but Yo Yo nabs him with the device Fitz whipped up to catch Gordon. This doesn’t stop the bombs he planted, but Yo Yo places them all at one location to not destroy the foundation. Fully super speed Yo Yo might have been too powerful, but I wish she had longer to play with them.

Screwed over by his pals, Garrett offers to teleport Coulson and crew to the SHIELD rally point. He does and promptly gets shot and killed…by Victoria Hand in a nice bit of SHIELD continuity karma.

Victoria has gathered with other agents including Brandon Gamble (Stephen Bishop, The Imposters) — although it sure seemed like we were being teased it was Nick Fury — to bring their 084 devices.

This was all part of Fitz, Jemma and Enoch’s Hail Mary play as Enoch delivered these items throughout the decades. While her memory is in tatters, Jemma is able to reconfigure the device and remembers the final item to start it — her wedding ring.

The device opens a portal and out pops our boy Fitz. But of course no happy reunion since Jemma doesn’t remember him at all. I’m not sure how much more effective this episode could have been to get me hyped for the series finale as this was a heck of a set up. Let’s see how it lays off.