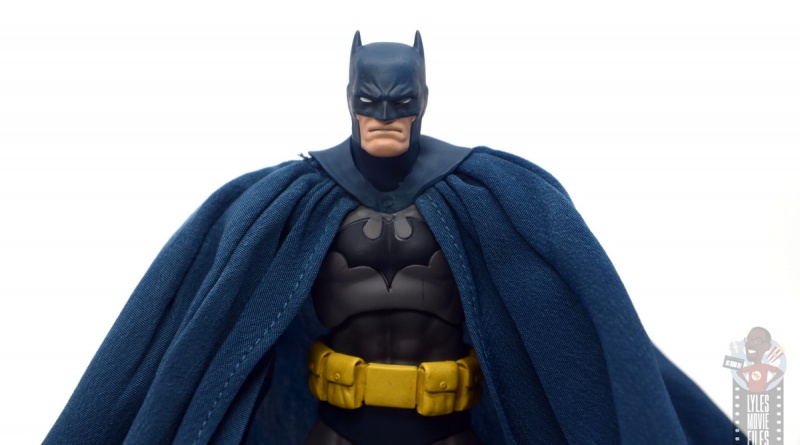 Every so often a figure comes out that gets the collector community into a buzz with talk of potential figure of the year. Even rarer do those figures live up to the hype. There’s a ton of attention right now on the MAFEX Batman Hush figure, which might be in the running for 2020 contention. Let’s see if he’s able to swing to the top of the crowd.

This is my first MAFEX figure and I ventured down this path largely because McFarlane Toys decided to focus on the modern DC looks for their figures and MAFEX is revisiting one of my favorite Batman stories in Hush. With three additional figures announced and a slew of classic looking characters available, this could become another outlet for DC figures. But it all starts with this guy.

Packaging:  The box presentation is very nice with the color tones of Hush that neatly resembles the trade. The window showcases the figure and all the accessories nicely.

It closely reminds me of the Storm Collectibles packaging setup. The back features more display options and spotlights more of the accessories. 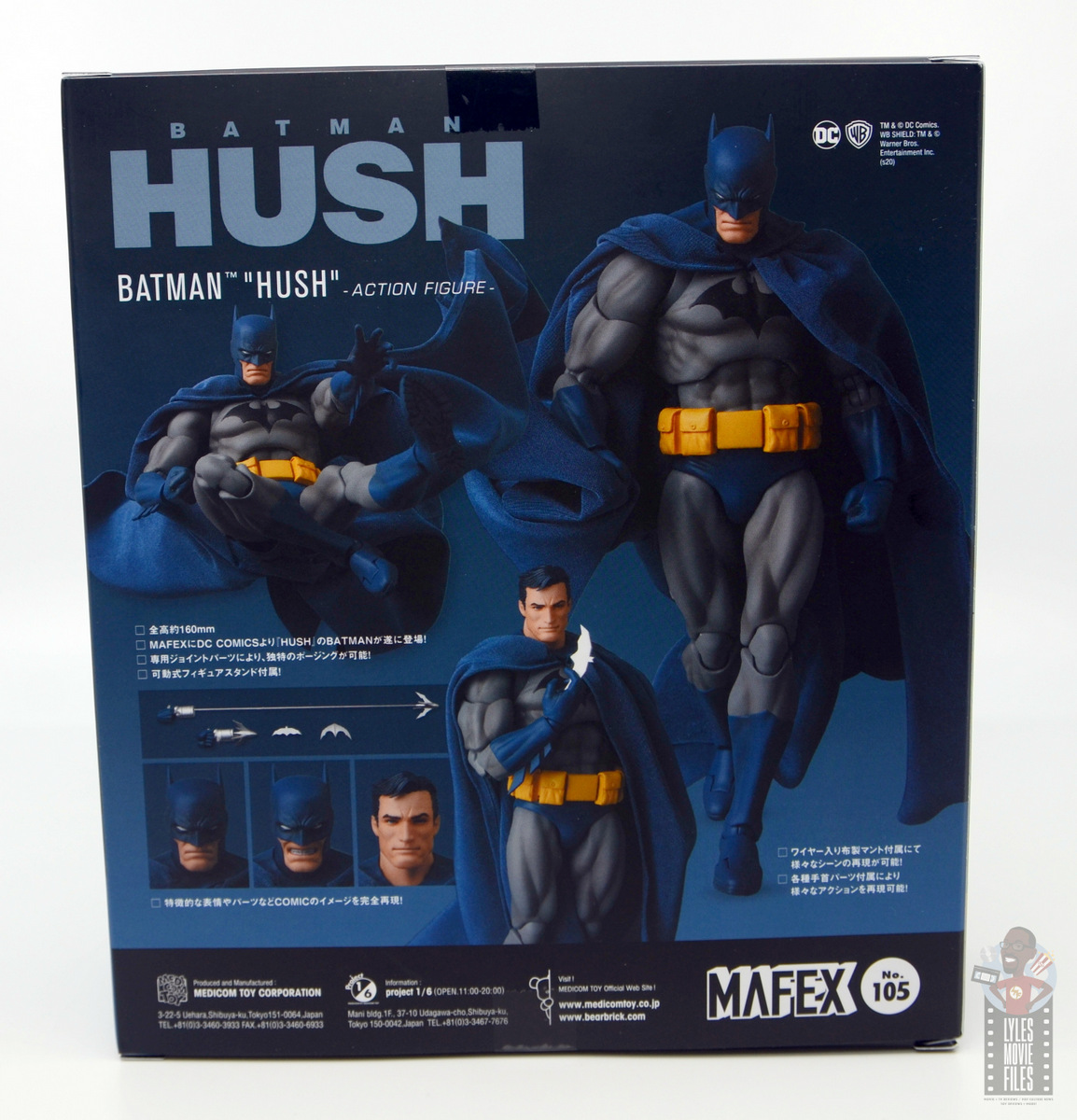 Likeness:  When you think of a Hush Batman, you instantly think of Jim Lee’s artwork. 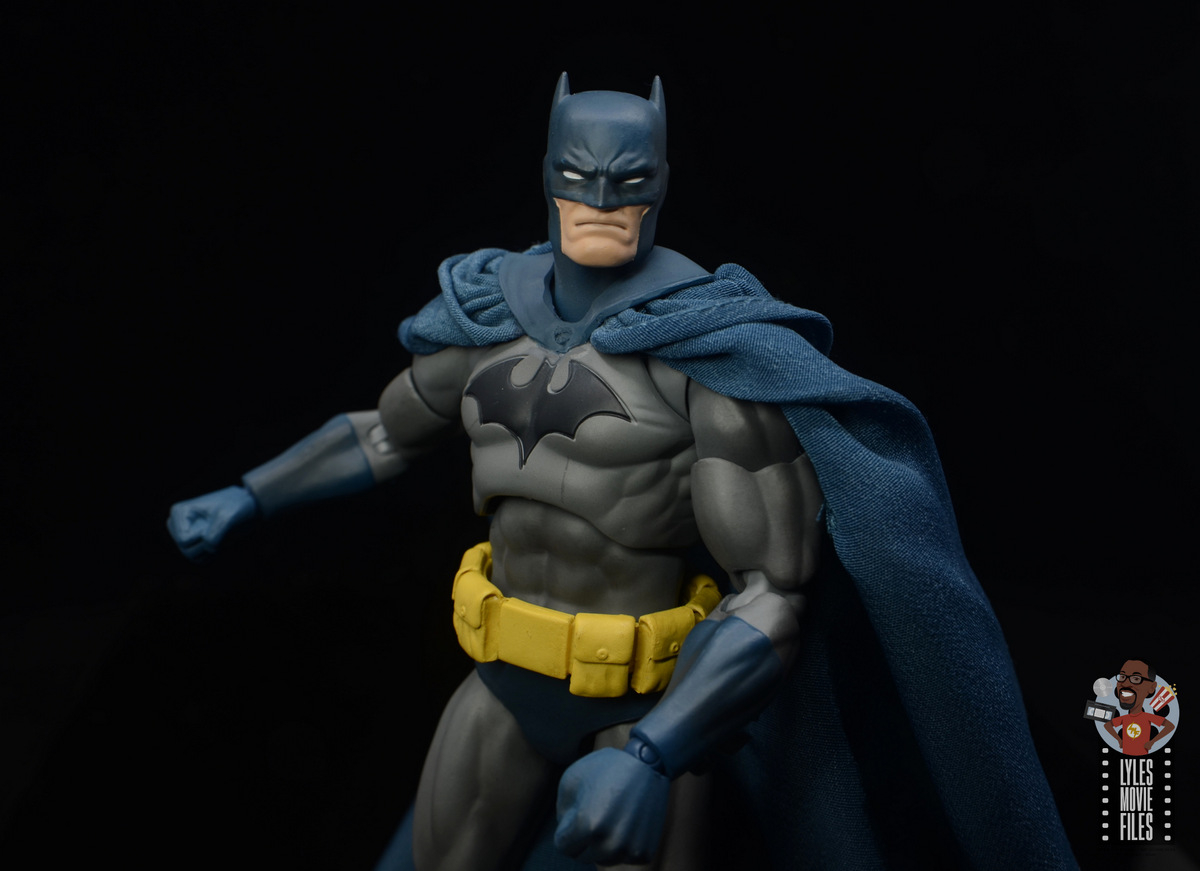 That yearlong story allowed Lee to tackle The Dark Knight and some of his most popular supporting characters and rogues. 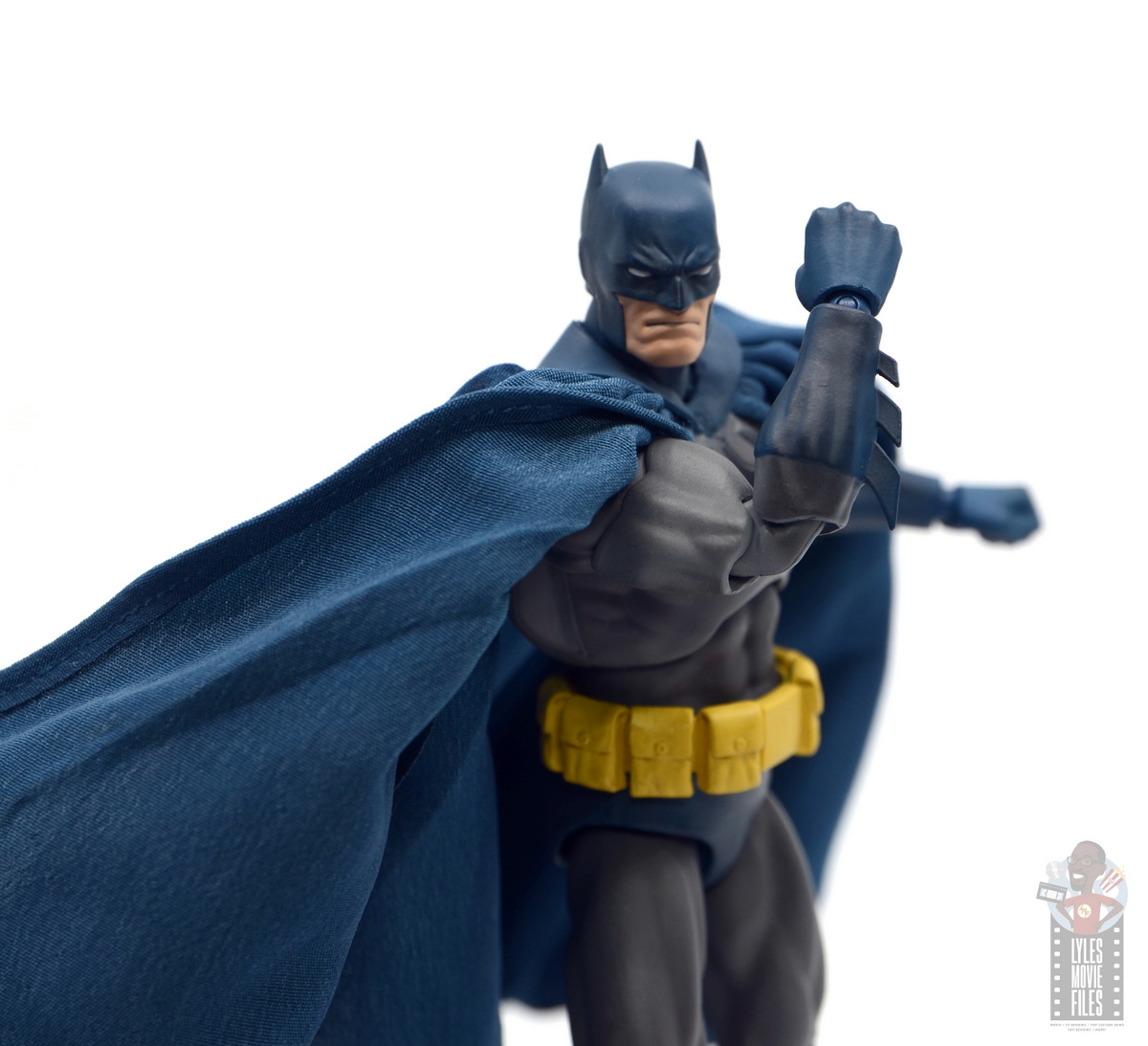 The main headsculpt definitely channels that Lee aesthetic with the shorter ear and furrowed brow. 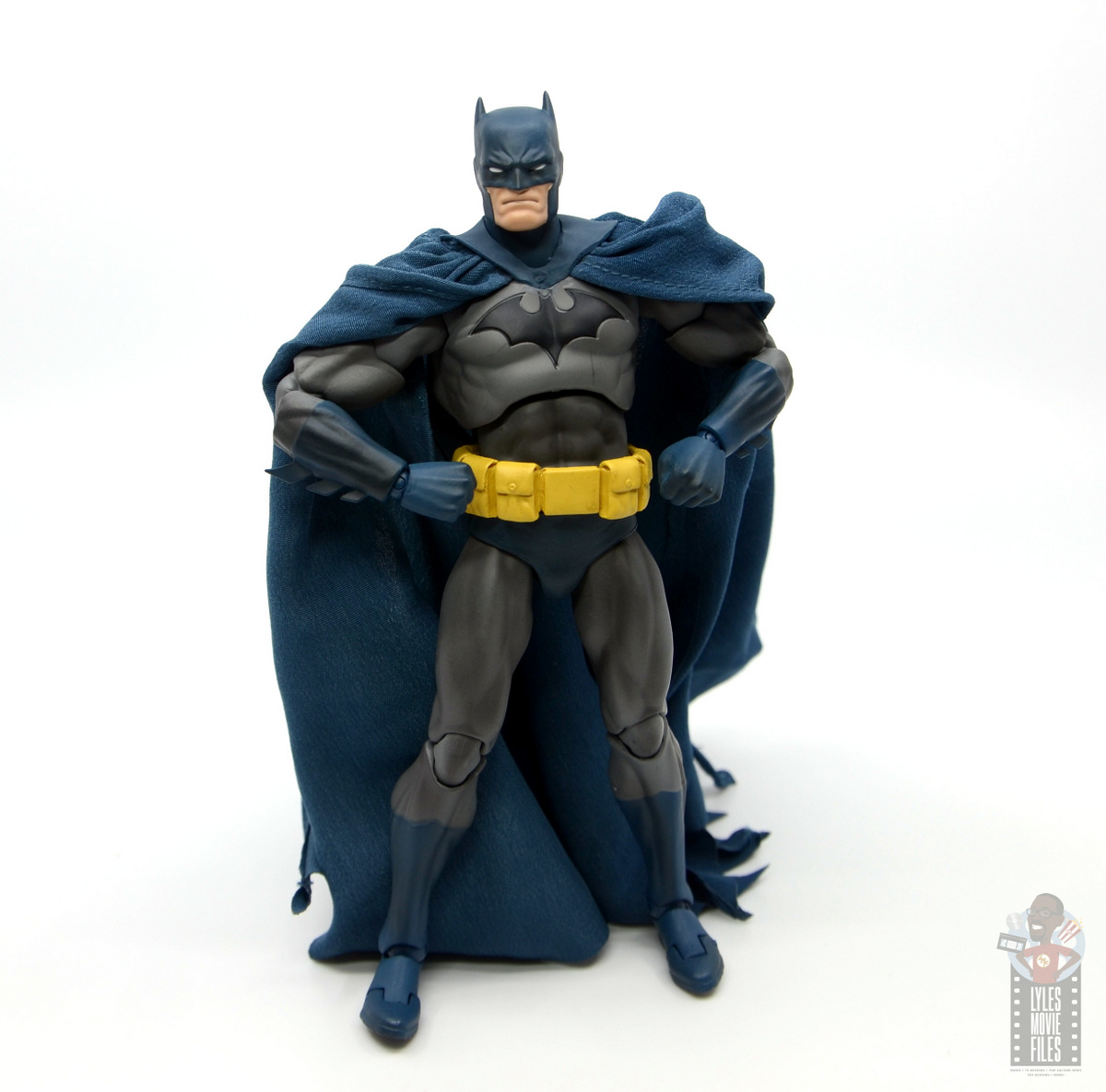 I like the flow of the body and there’s no weird extended limbs here. Everything seems proportioned properly.

Paint:  Most of the paintwork is clean. Some of the bat logo is not filled all the way in, which is a little irritating. There’s no slop on the belt and the head is clean as well. 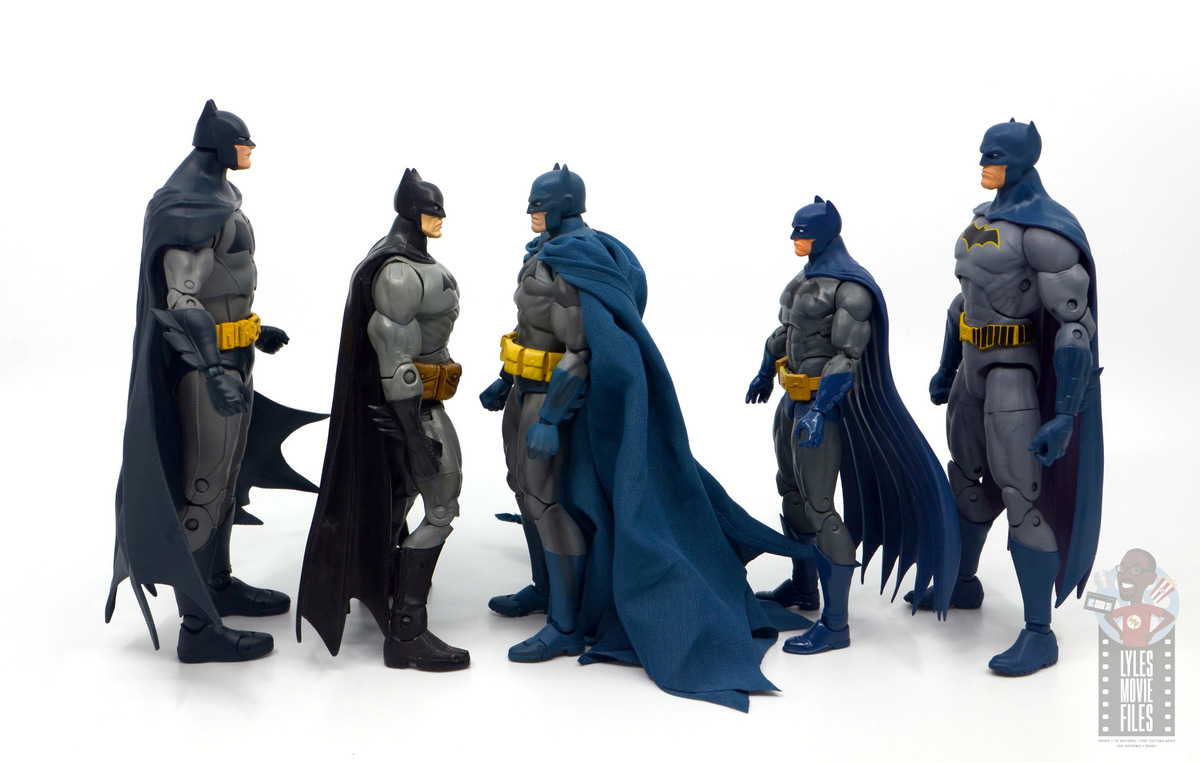 Scale:  At 6” the Batman Hush matches up fairly well with most other figures including the DC Multiverse line and certain DC Classics. 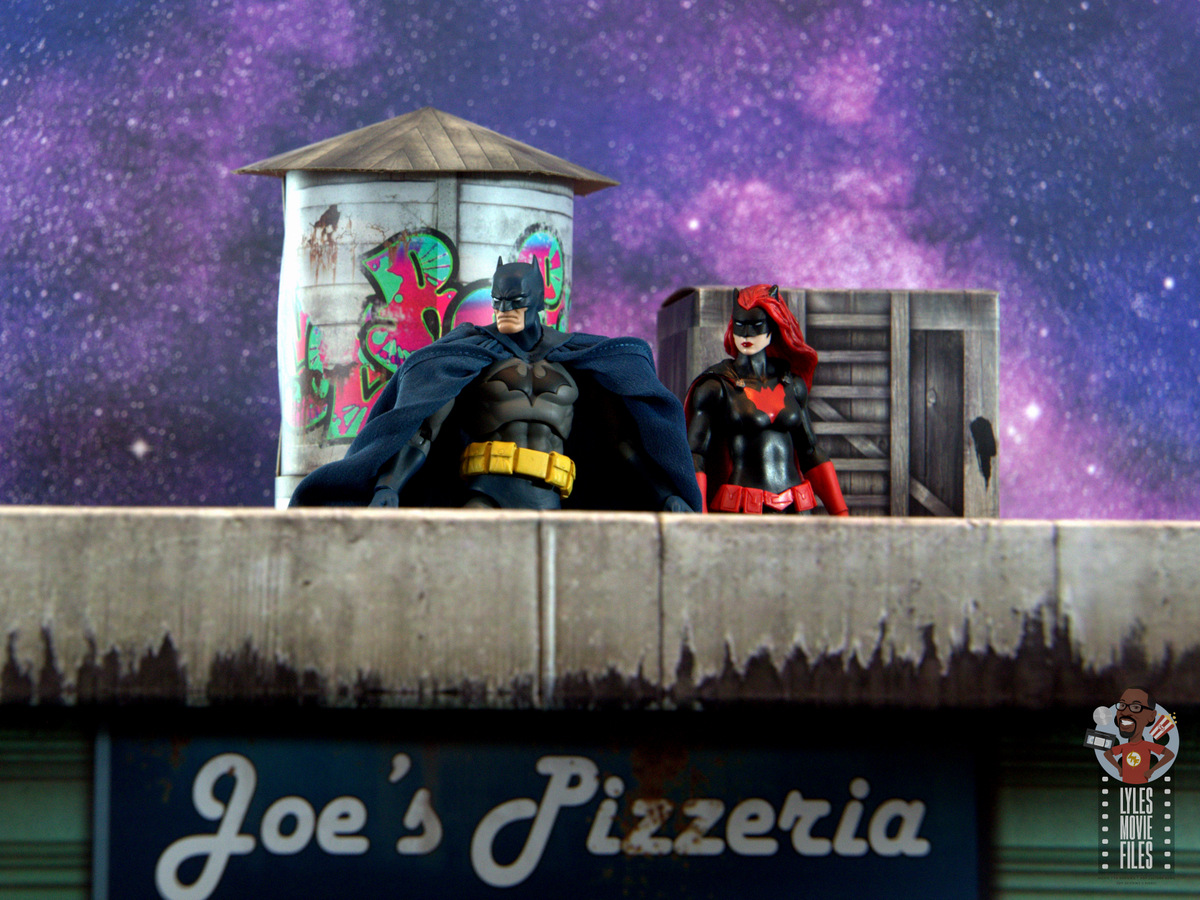 Articulation: Batman has excellent articulation and allows for a ton of iconic Batman poses. 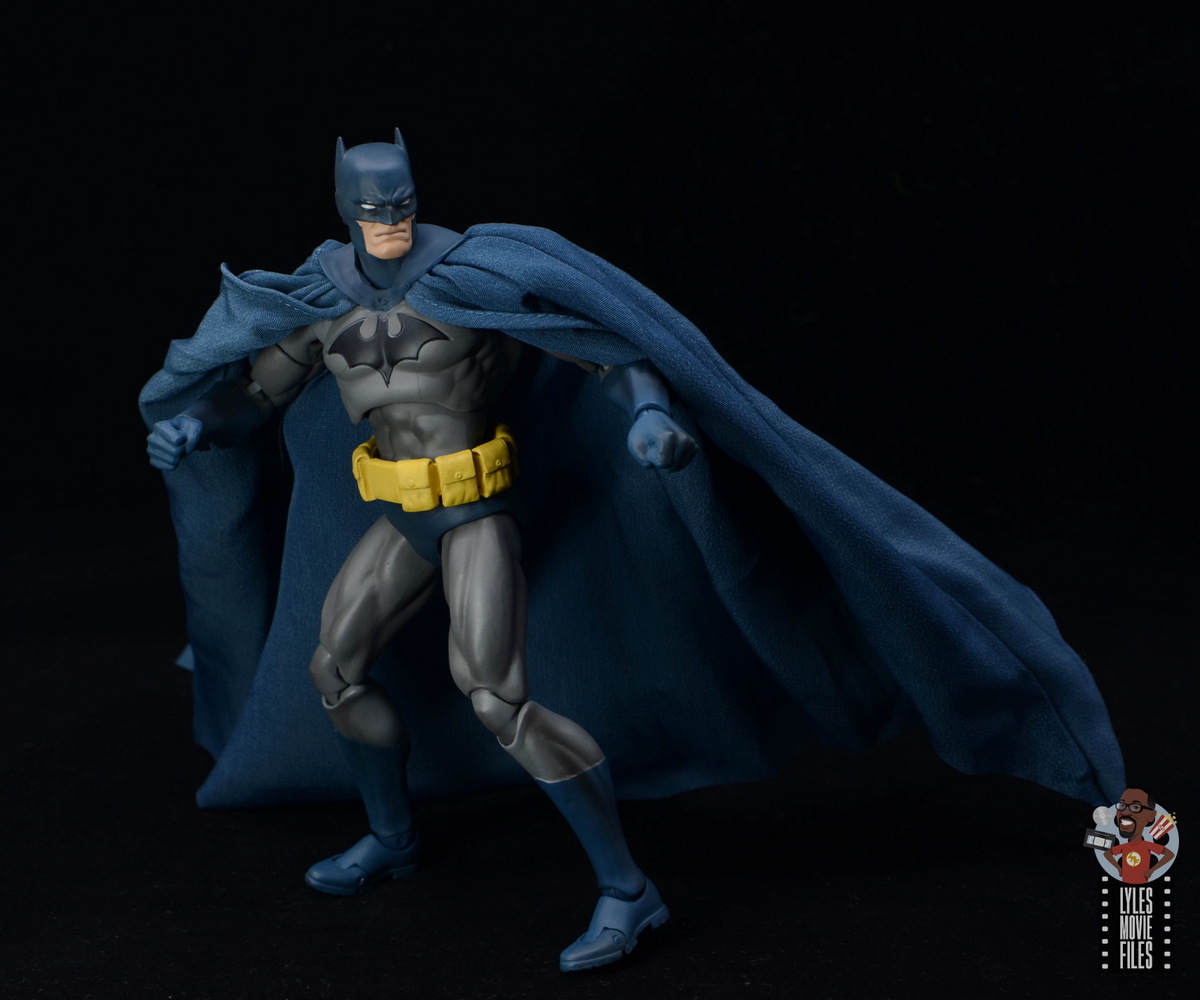 This is probably the best articulated Batman in my collection and I don’t think it’s really that close. I was impressed by the joint strength, which allowed Batman to hold dynamic poses for an extended amount of time. 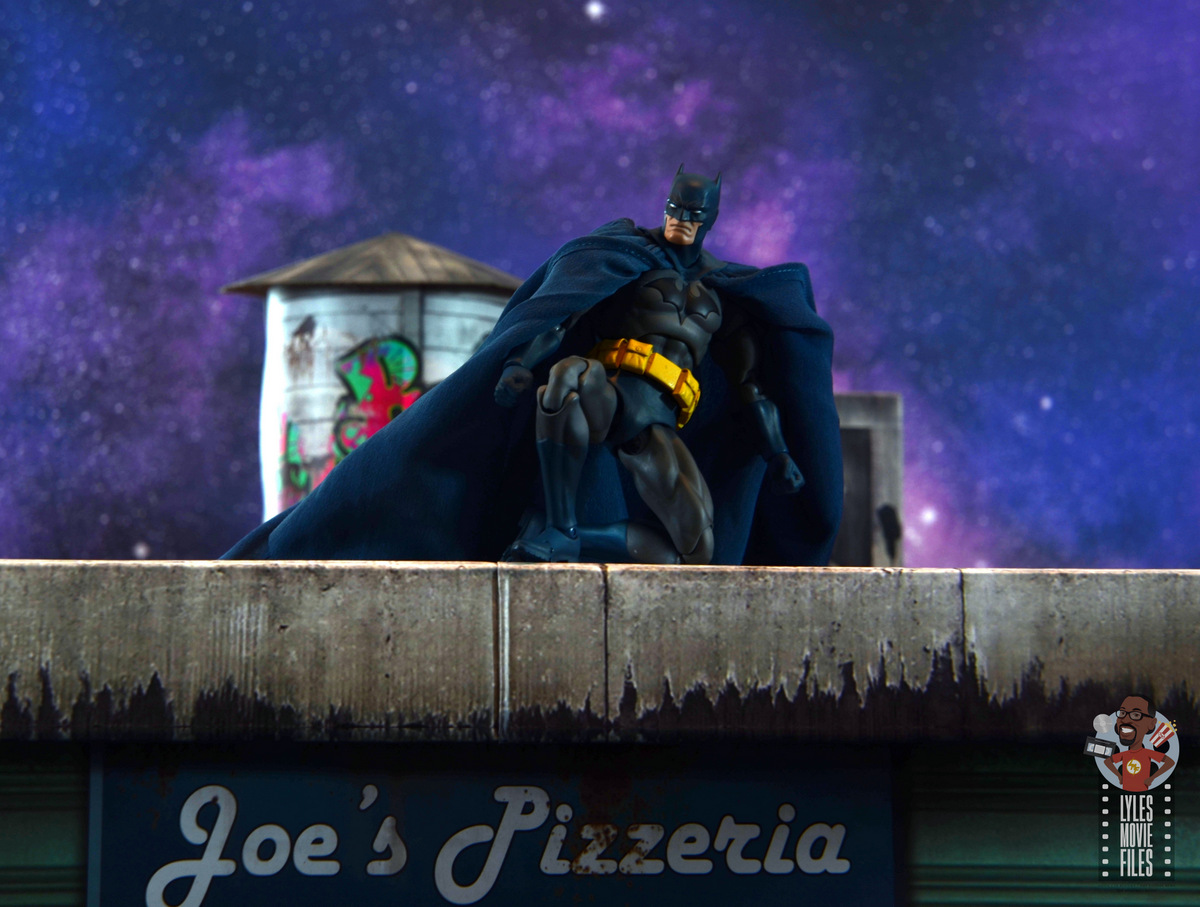 Balancing on one leg isn’t a problem for this guy. The torso joint has better range than most allowing for better pivoting and crouching poses. 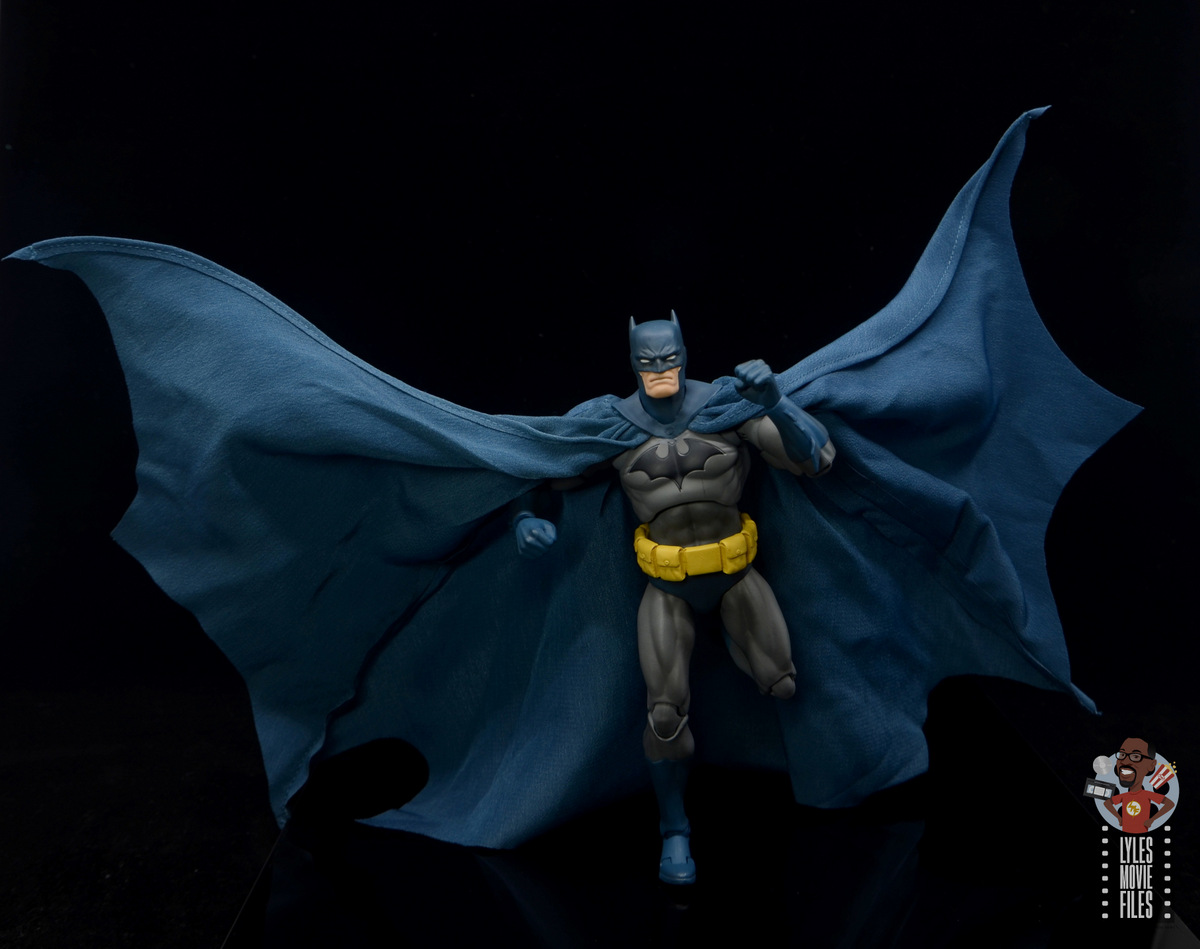 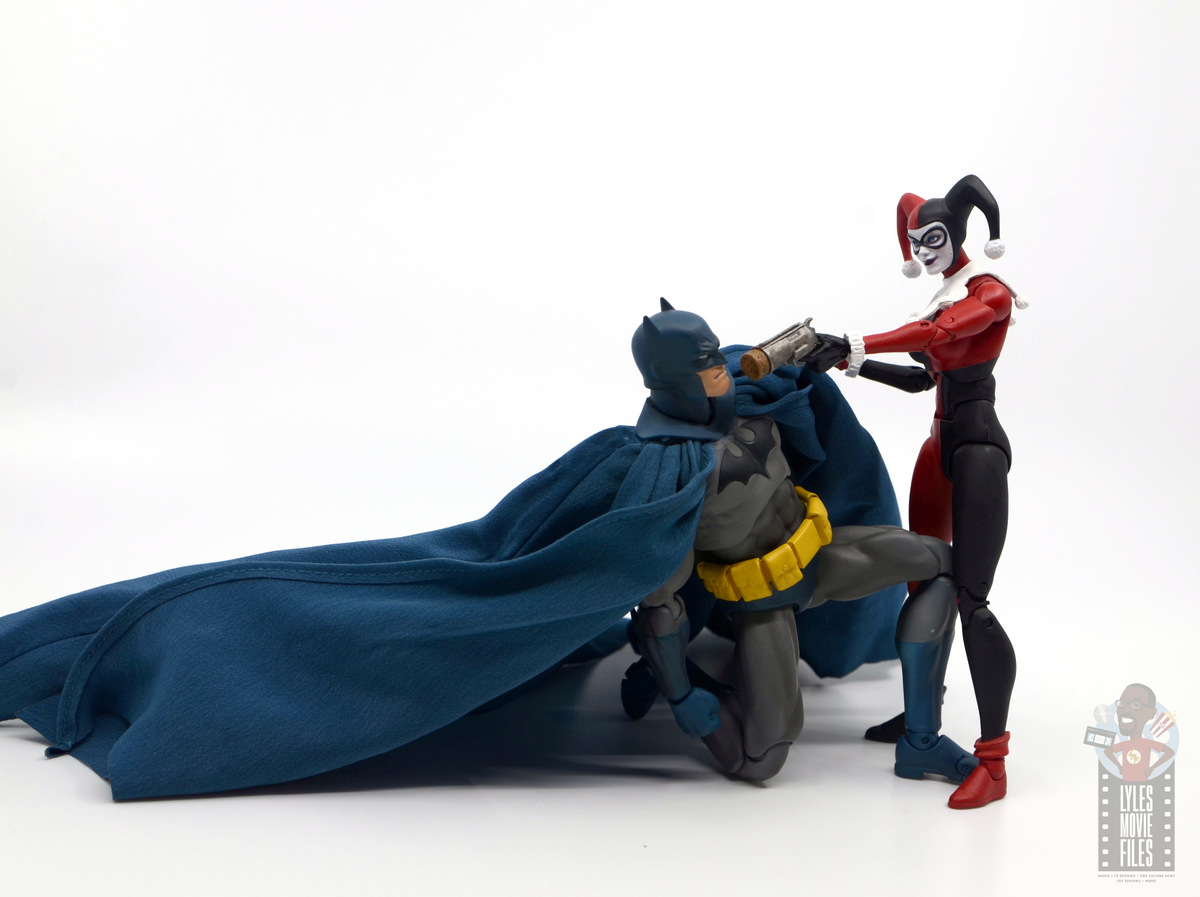 Cape: I’m making this a separate category since it’s a beast all within itself. First off, it’s massive. 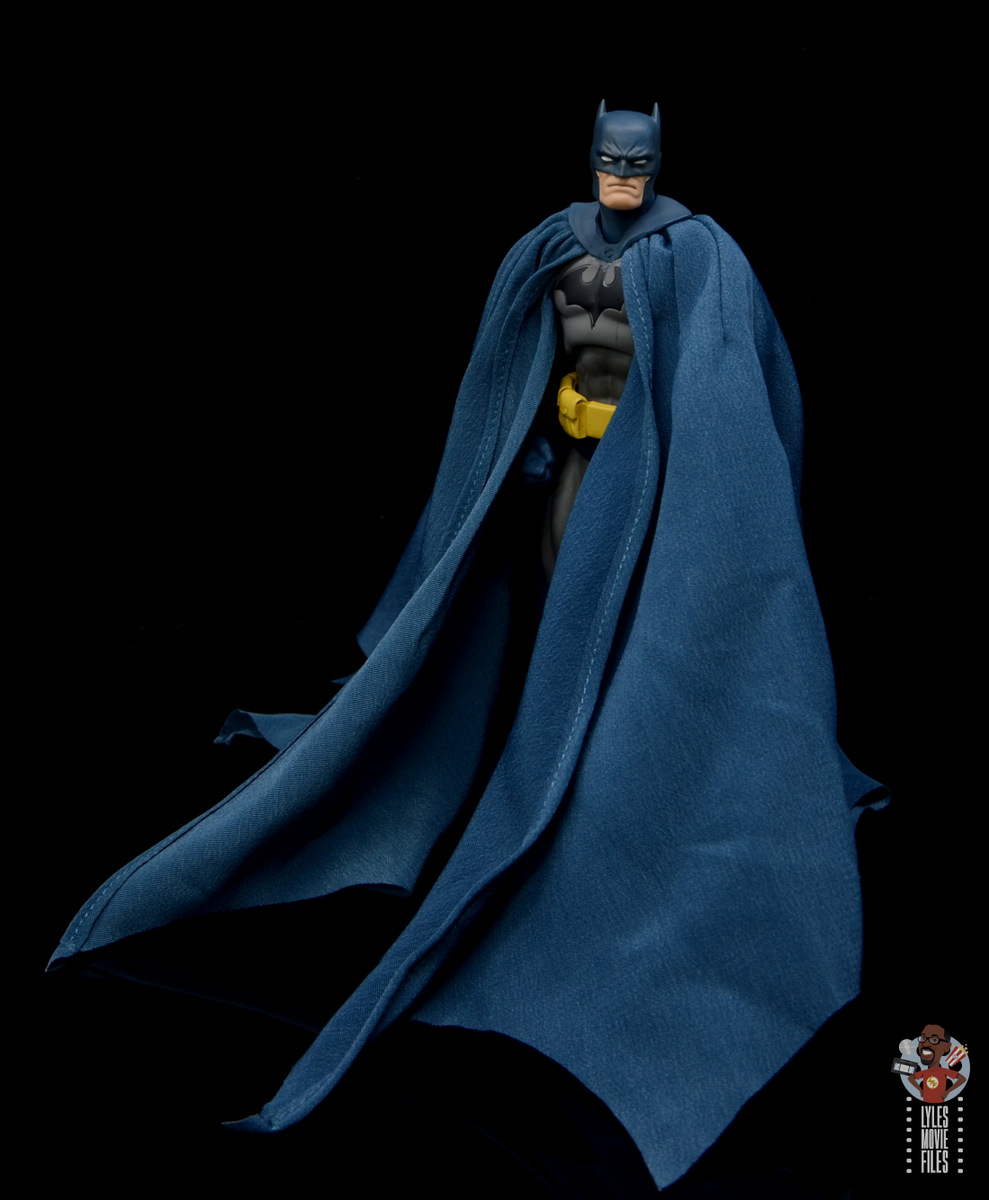 Thanks to the wires sewn within the cape, you can fold it unto itself pretty well for more of a standard cape visual. 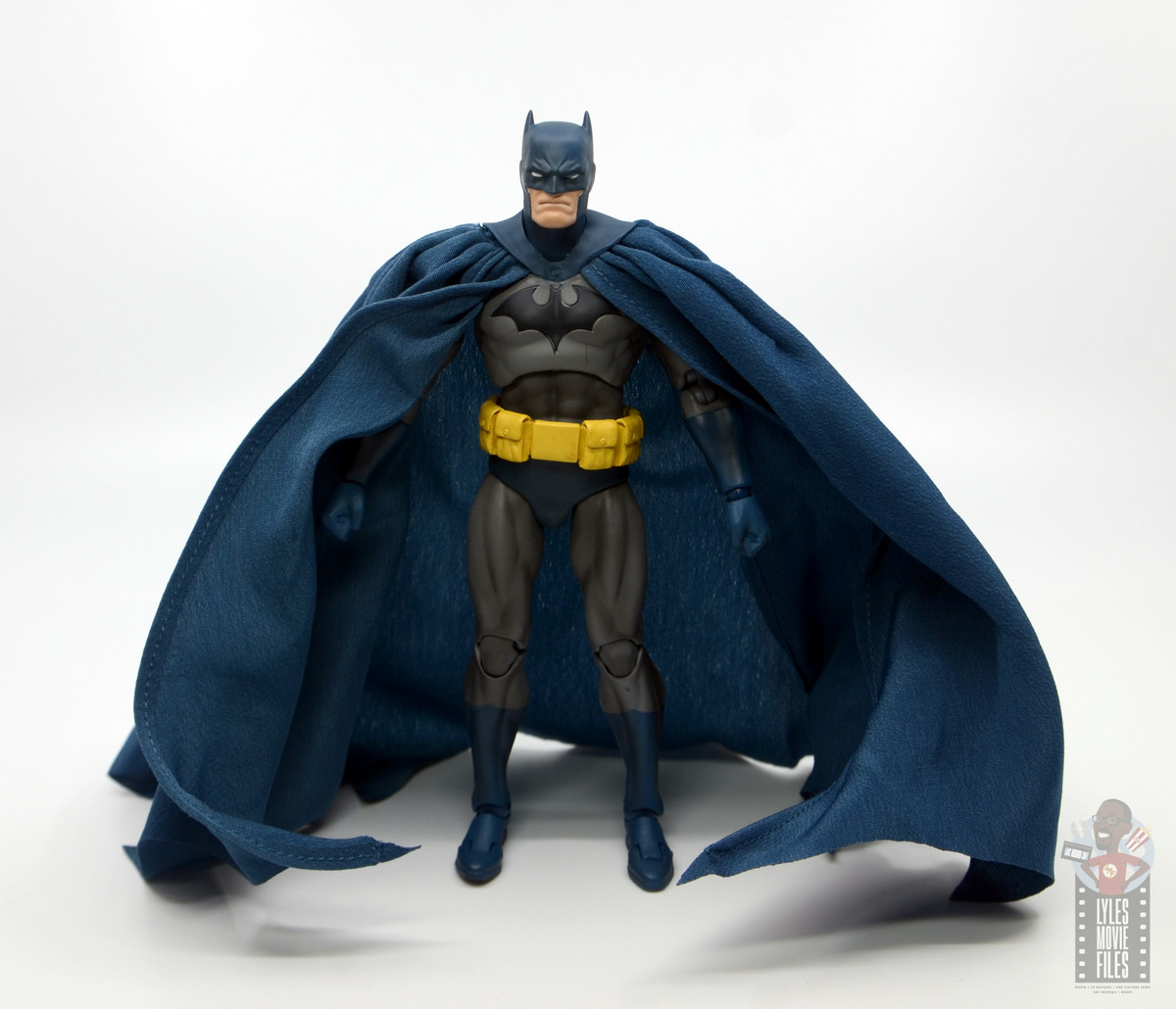 But when you want to get dramatic and have some flair. That leads to a lot of fun and with some creativity and patience, you can get some terrific comic-esque Batman poses. 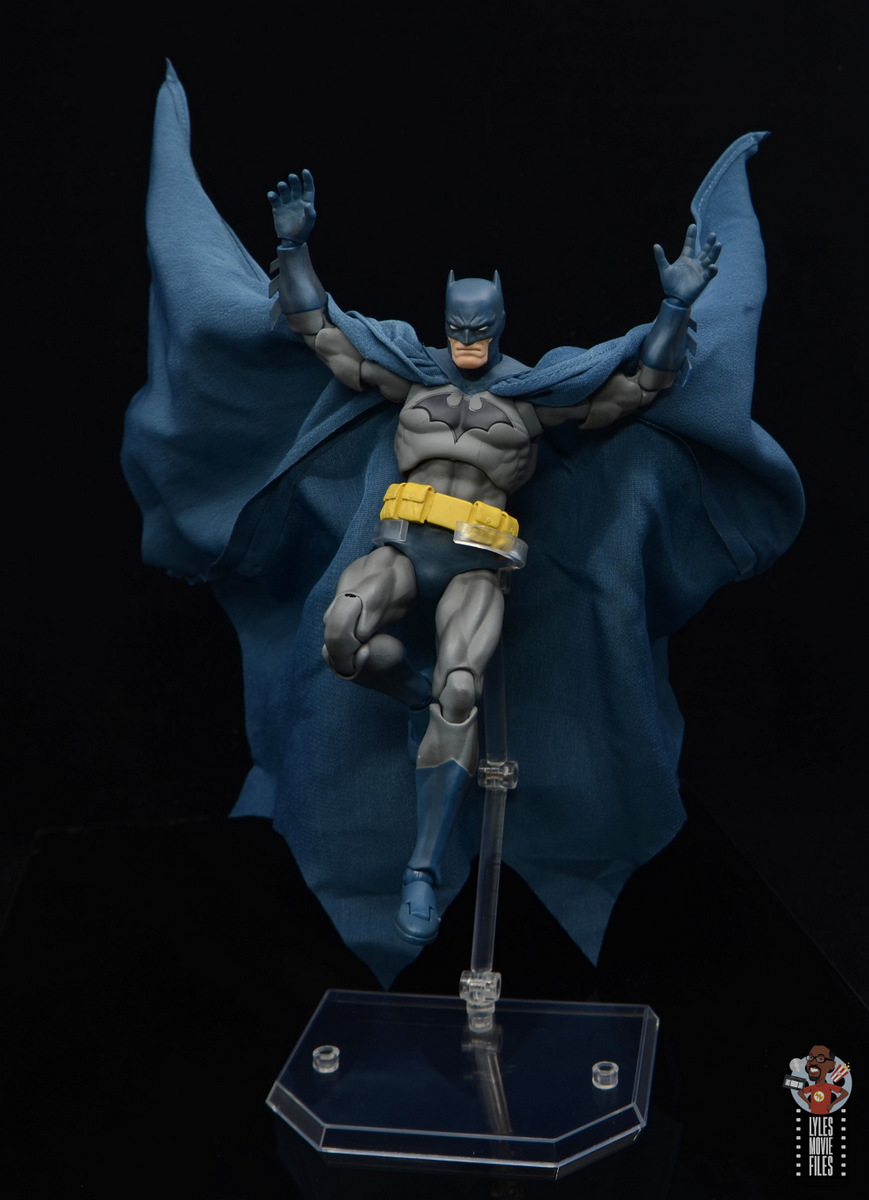 The only downside to this is the wires aren’t necessarily that thick and from some accounts are prone to breaking with more deliberate posing and in some cases basic general posing. 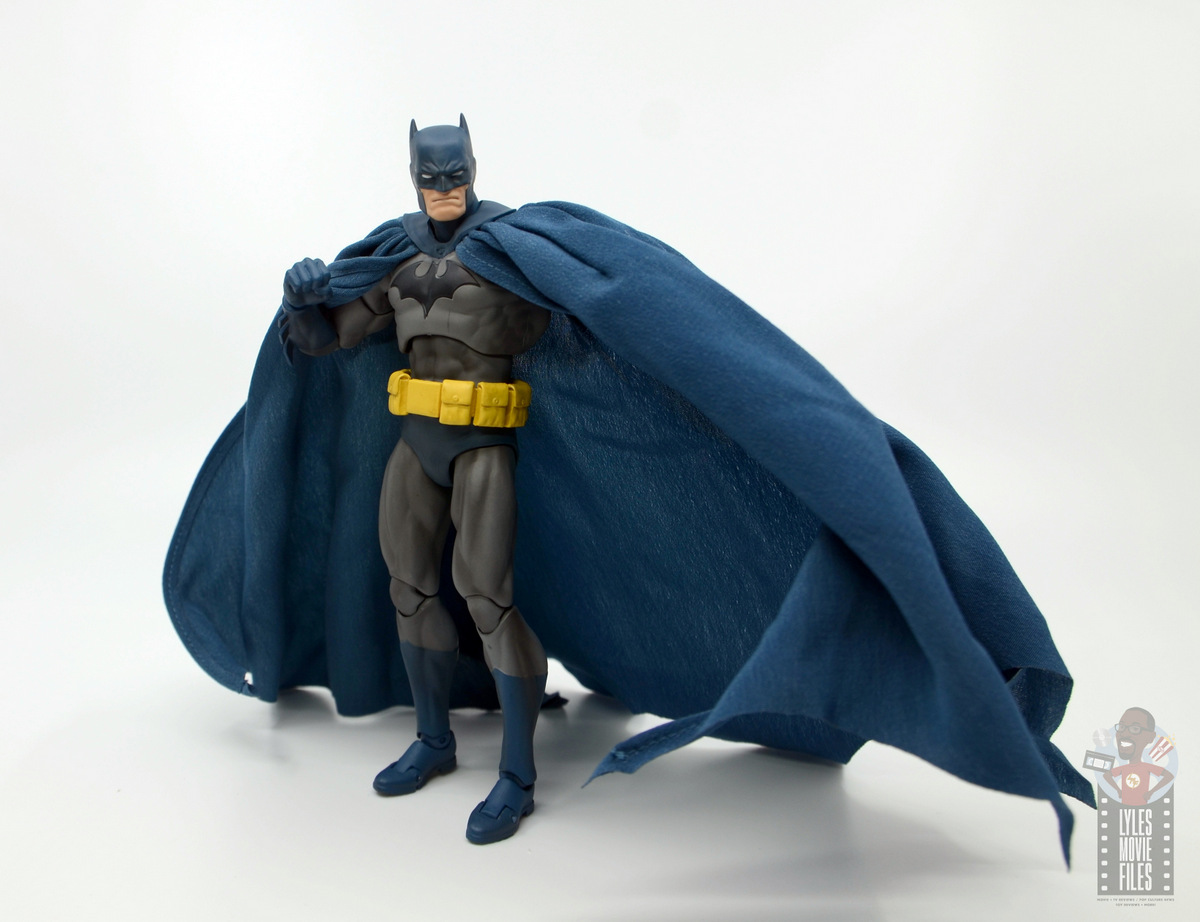 I’m pretty sure one of my wires has come out from under the cowl and I’m not even sure how that could be fixed. There’s also some glue spots along the cape too. At this price point, that’s not good, Bob. 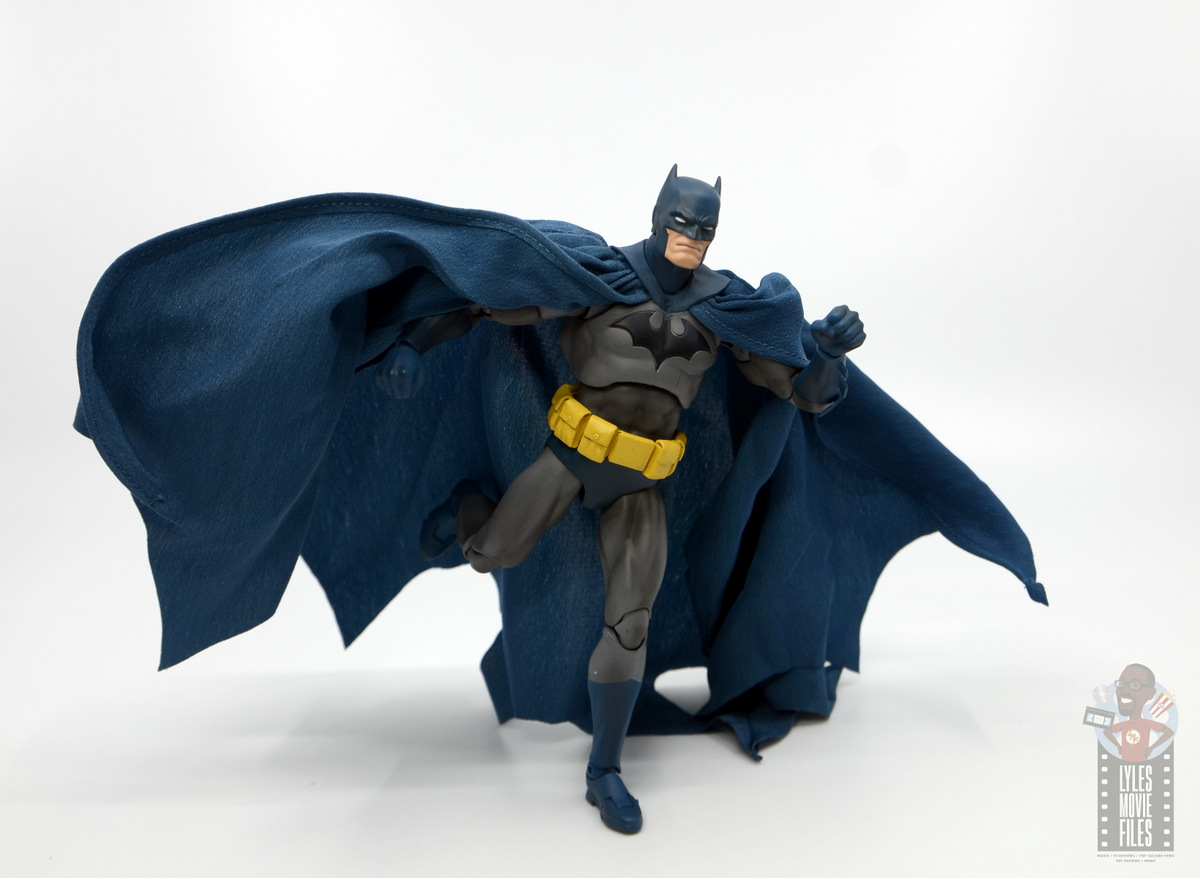 Accessories:  Batman’s got plenty of gear that should prove very useful for posing. 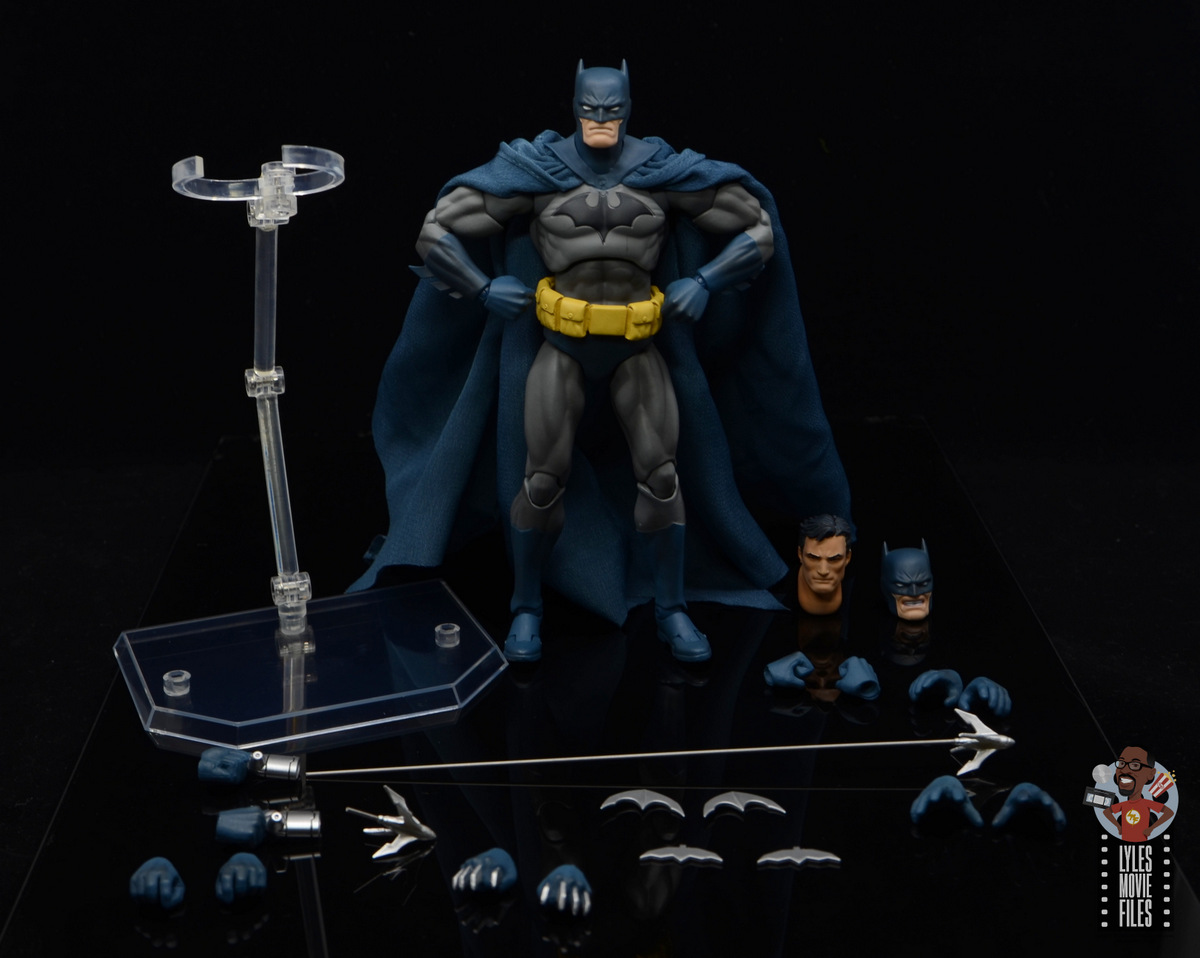 Additionally, he’s got a left hand with a grapple gun and another with an extended grapple gun. 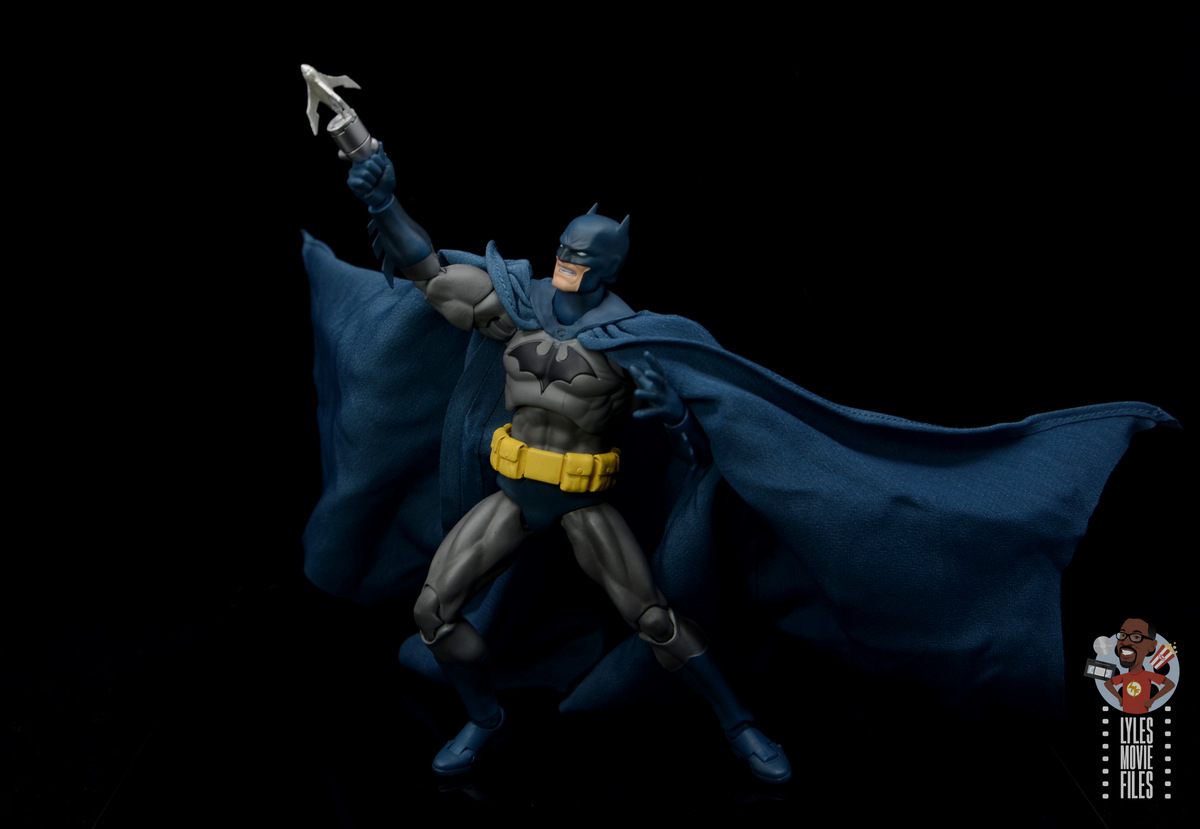 I appreciate having the display options. 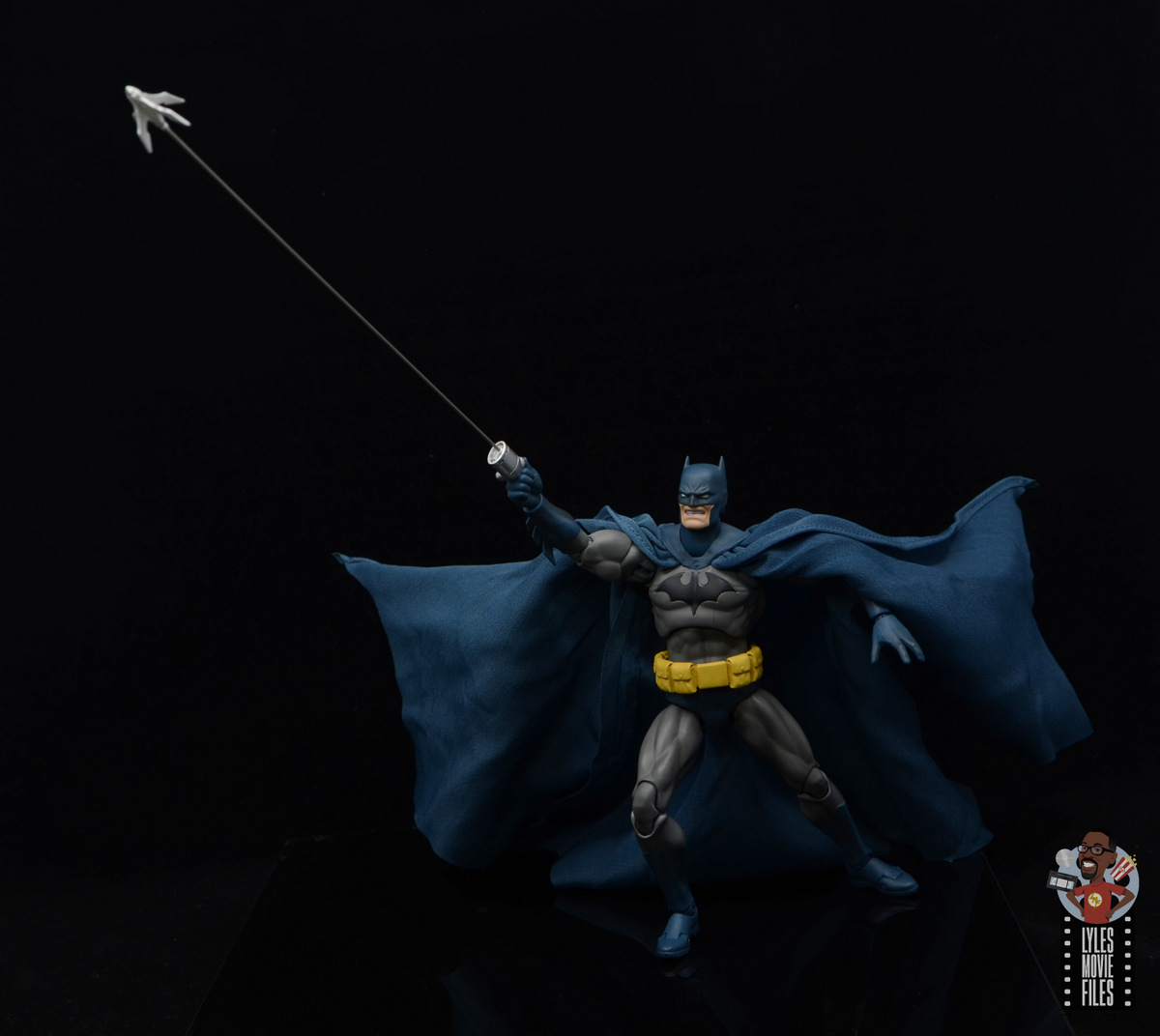 He’s also got four batarangs — two with more of a curved edge and two with a flatter edge. That’s a good idea for the various scenarios Batman could find himself in on your display. 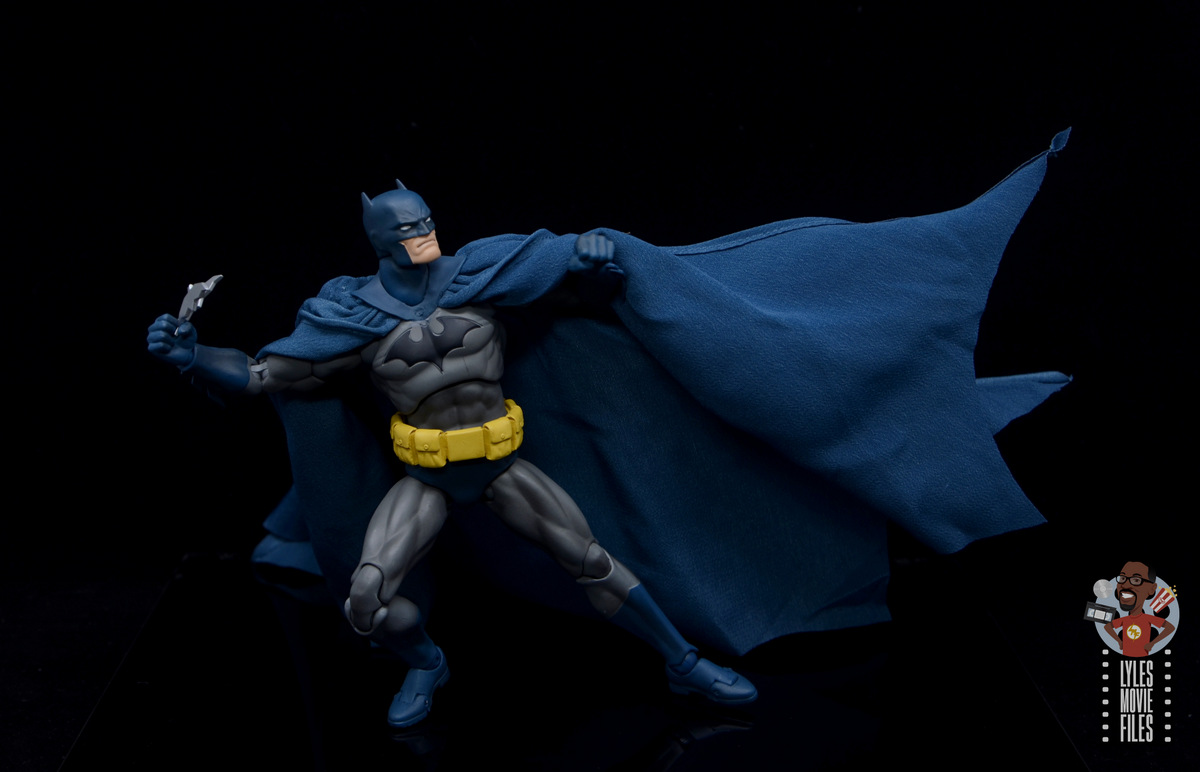 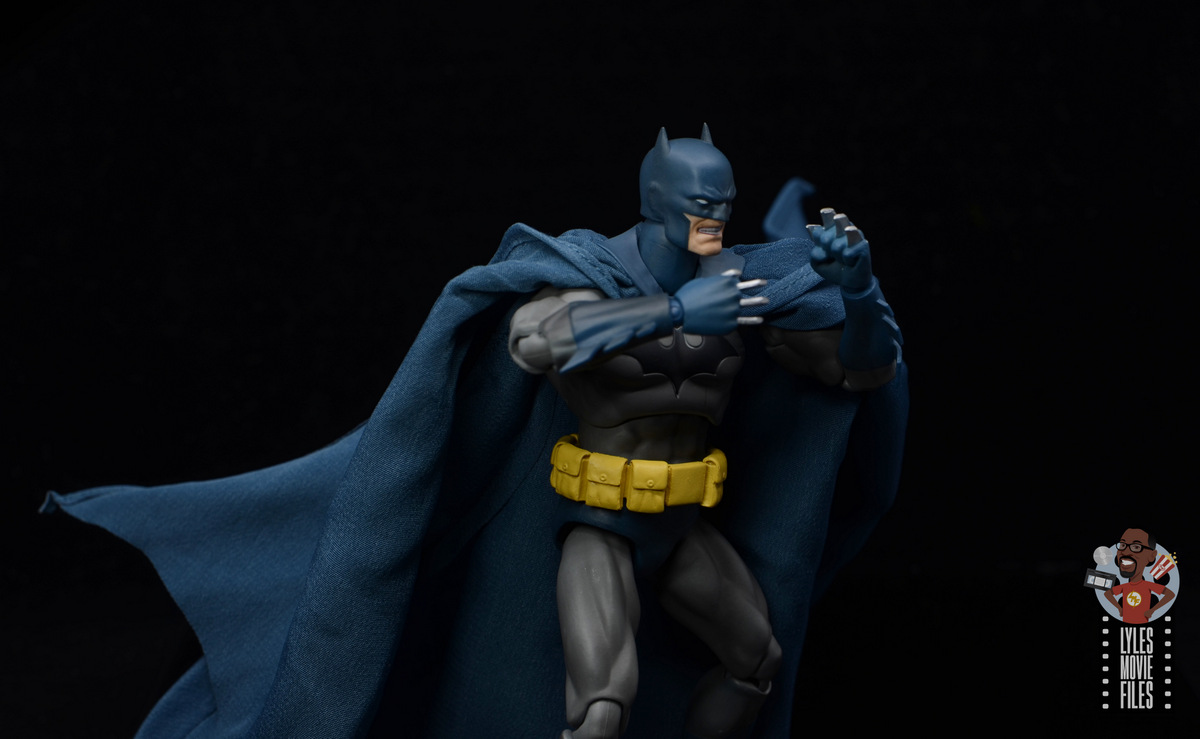 This is great for an intense ready to rumble Batman. The second is a Bruce Wayne head sculpt. The paintwork here is impressive. 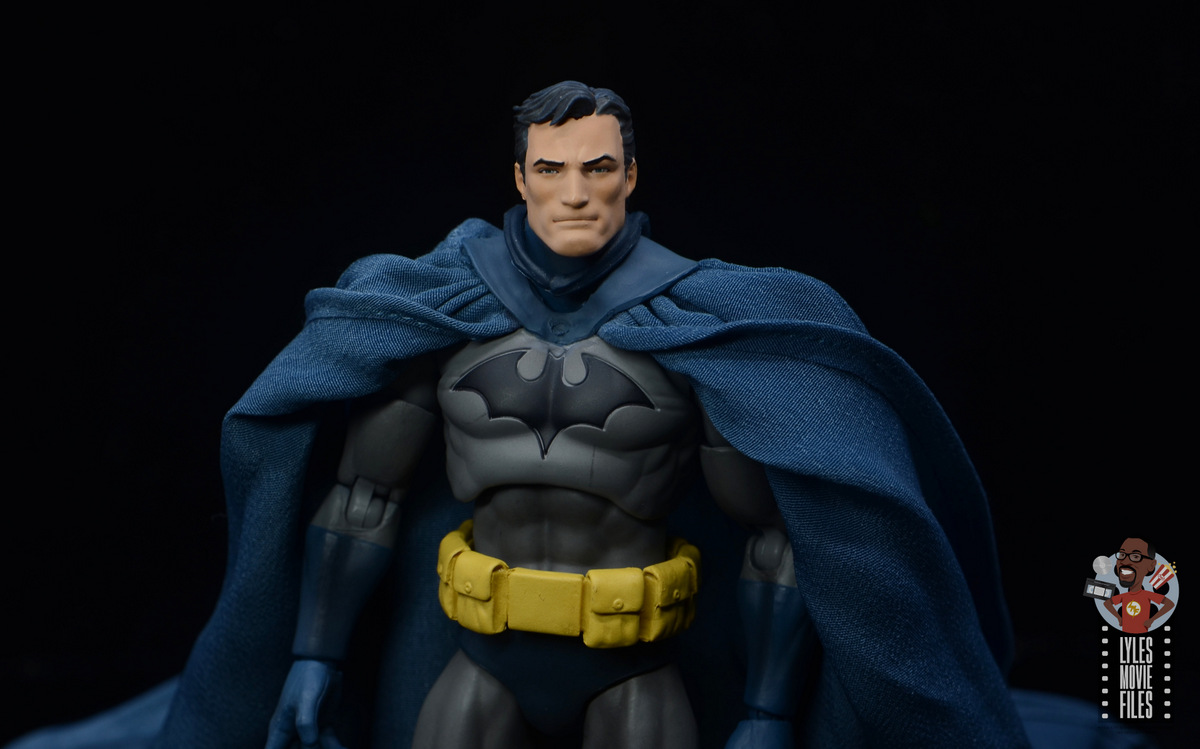 I do wish it came with a cowl to drape over the cape, but here’s where that Mattel DC Multiverse Batman comes in handy. It’s almost an exact match and works nicely in a pinch. 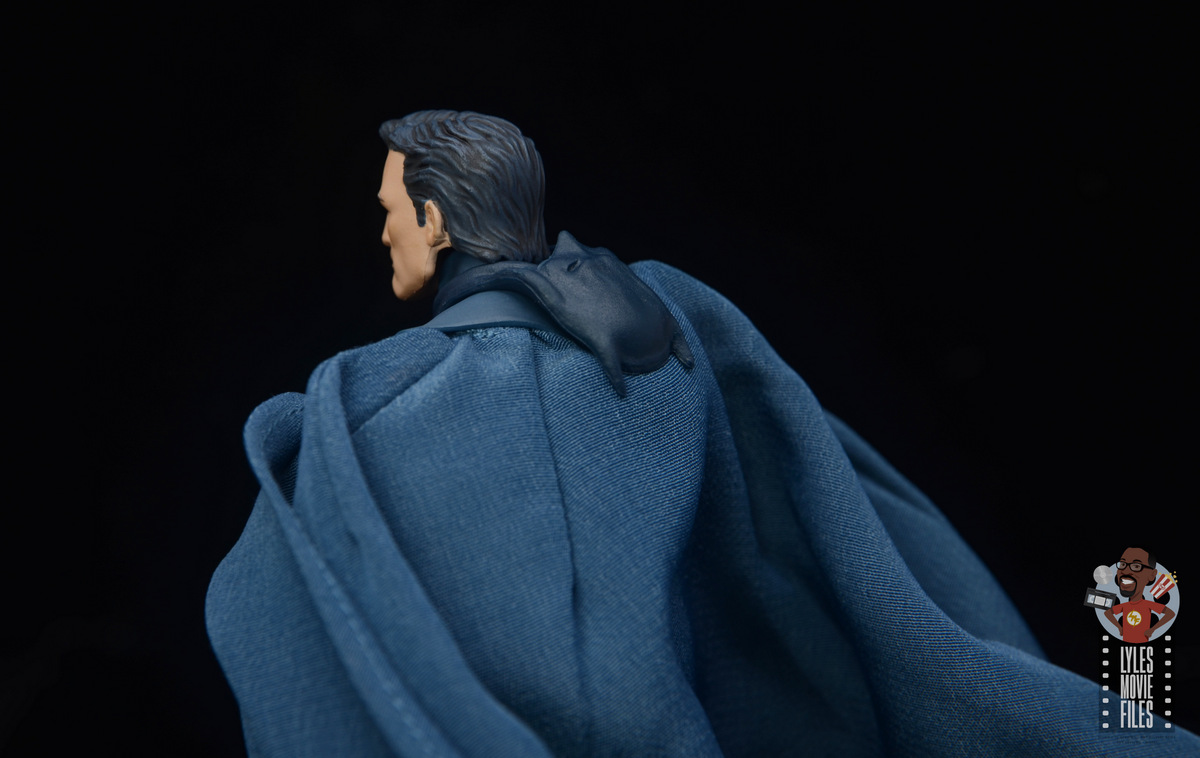 Worth it?  This one is gonna cost you. I ordered him from HLJ.com, which was fine until the shipping cost brought him in just under $100. In fairness, I did receive him faster than I normally get figures from domestic companies even with the expected COVID delays. 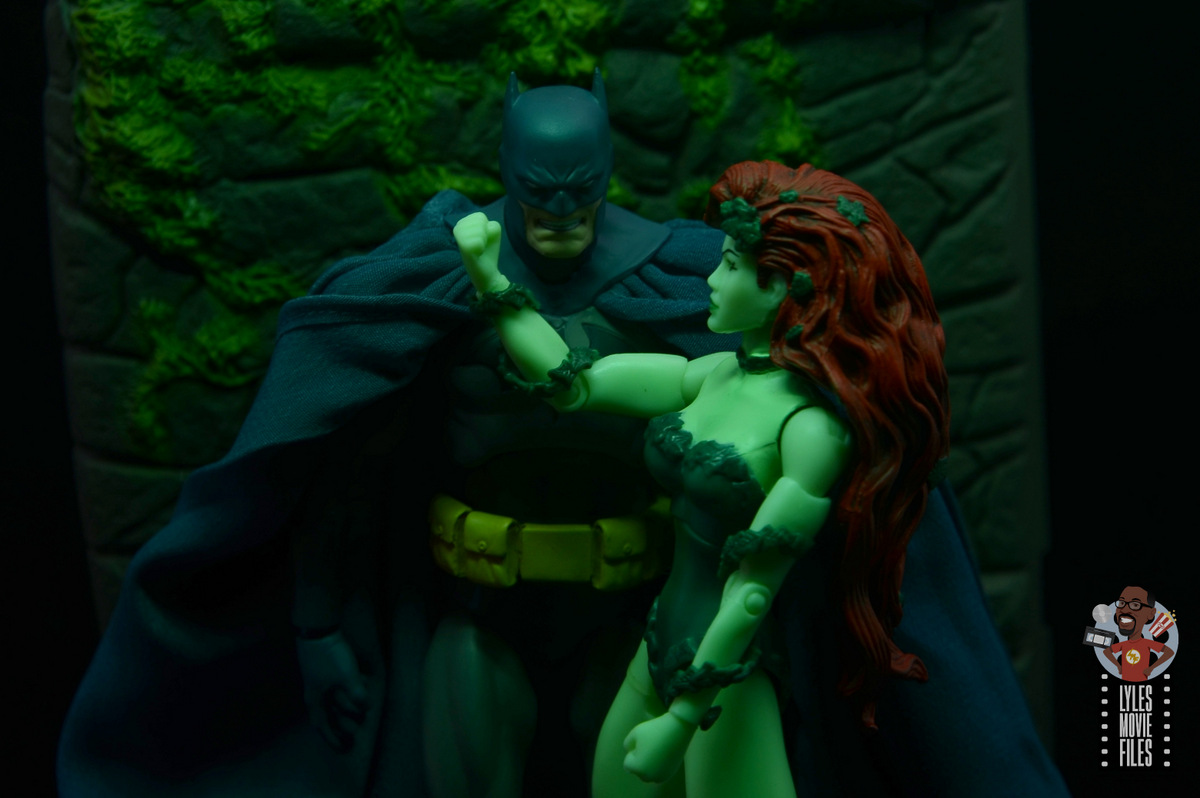 This is tricky as I like a lot about this figure, but I’m gonna judge paint issues on a figure nearly four times the cost of a mass retail figure a lot harsher. The cape idea is great, but making use of the poseability shouldn’t result in the wiring coming undone. With a better engineered cape that could hold up to the rigors of reasonable posing this might be my figure of the year, but its flaws hold it back just enough for top contention. 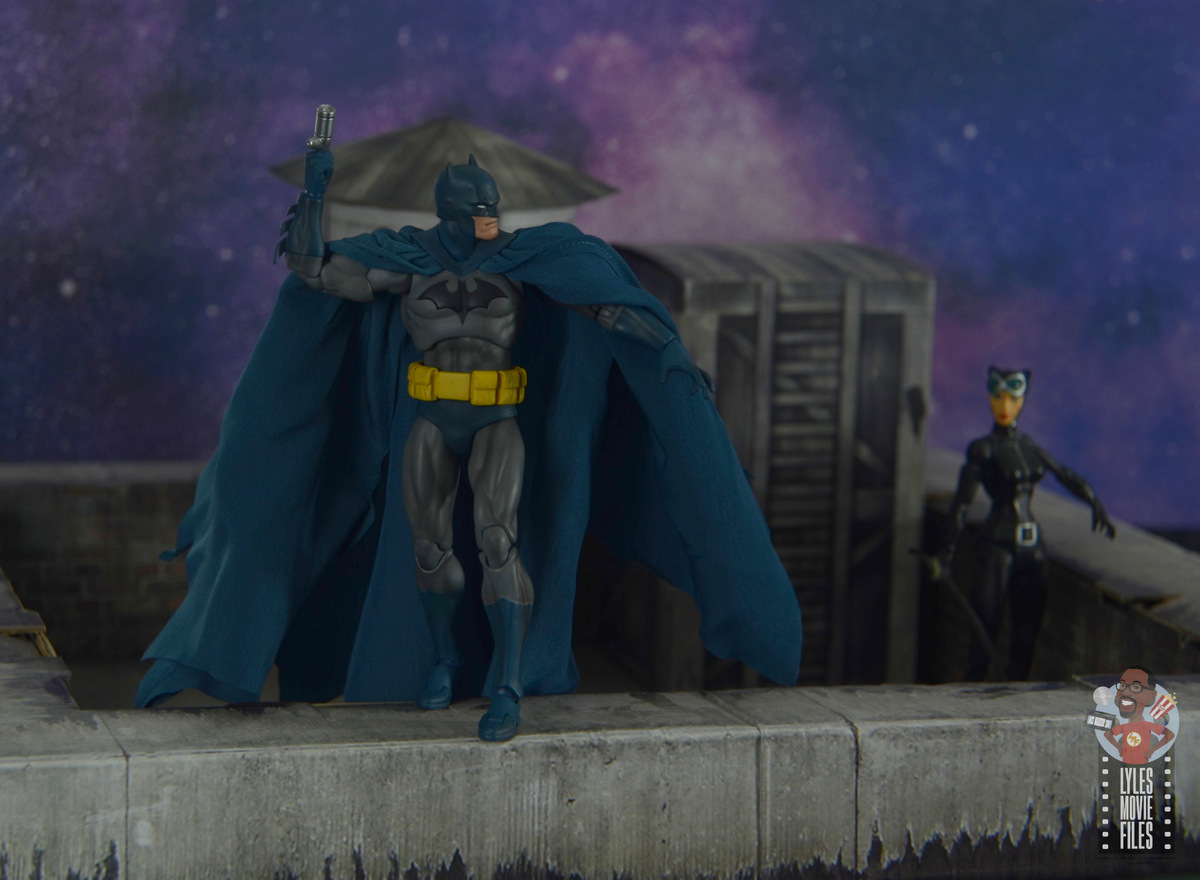 Where to get it?  I’d recommend checking out places like Sideshow Collectibles, which currently has him on the waitlist. Amazon has the black attire up for pre-order. Entertainment Earth has the blue attire still for pre-order. Sideshow also has the Hush Superman and Hush himself available for pre-order with free shipping, which is the best deal I can find.

I’ve already pre-ordered both. You can also try HLJ, which also has him back-ordered. Big Bad Toy Store has him up for pre-order so that’s probably the best option. I’d recommend grabbing him now if you’re on the fence. 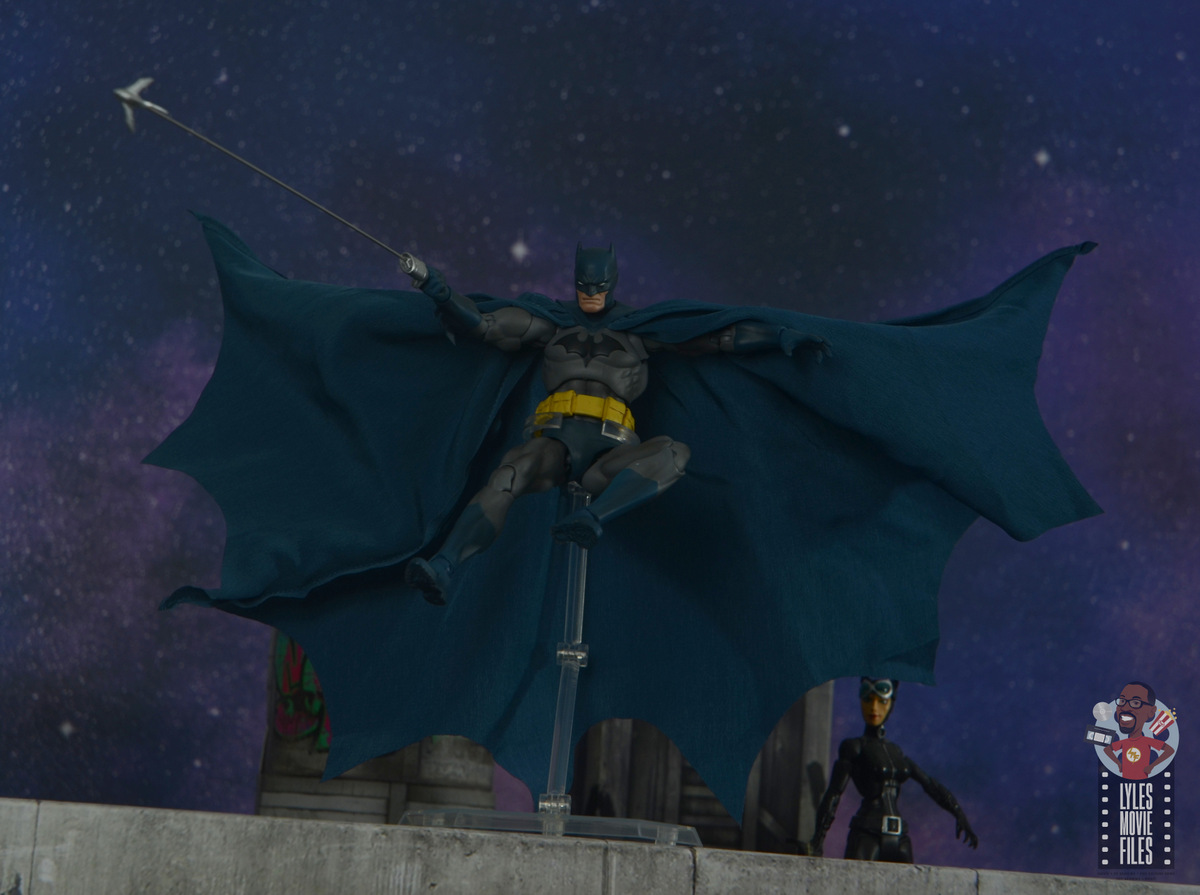