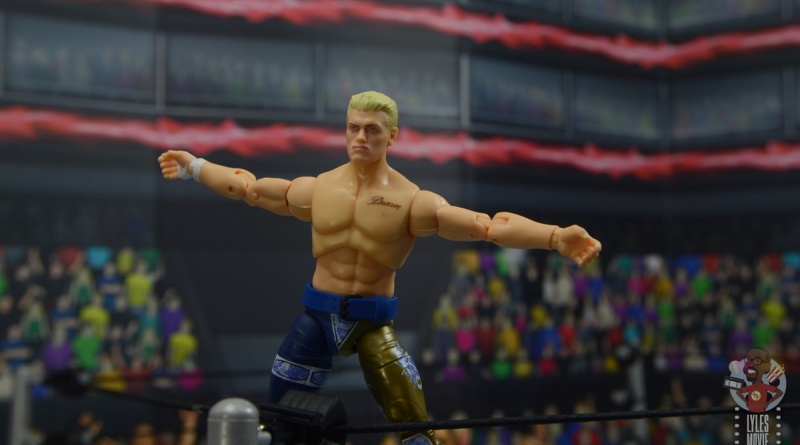 AEW has shaken up the wrestling world for delivering what modern wrestling fans want. I’m down for any promotion that makes the WWE work harder instead of churning out their special brand of mediocrity. Faster than anyone probably expected, AEW revealed an AEW Unrivaled action figure line in partnership with Wicked Cool Toys.

The first wave was revealed months ago and after a less than stellar release — never promise figures will be on shelves based on a Wal-Mart calendar, I’m checking out the first figure in the wave, The American Nightmare Cody.

Let’s see if this figure is a dream or if WCT needs some more sleep to get this line rolling.

Packaging:  WCT set up a very eye catching packaging. Chalk a lot of that up to the gold up top and the unique arrangement of the package paneling. Staples like the right side portrait and a clear window of the figure are included. I do wish the side portrait was bigger if you’re looking at the line from a distance.

The rear is disappointing as it just features a big image of Cody from the event the attire is based on without much else.

There’s no bio or stats just Cody’s autograph and a layout of the other figures in the wave. For a new line six is a good start despite leaning heavily on the Elite.

Likeness:  I always think figure companies get themselves in trouble when they go for a real life picture that features a different expression than their figure. It immediately skews the likeness of the figure as “off” simply because the expressions don’t match. 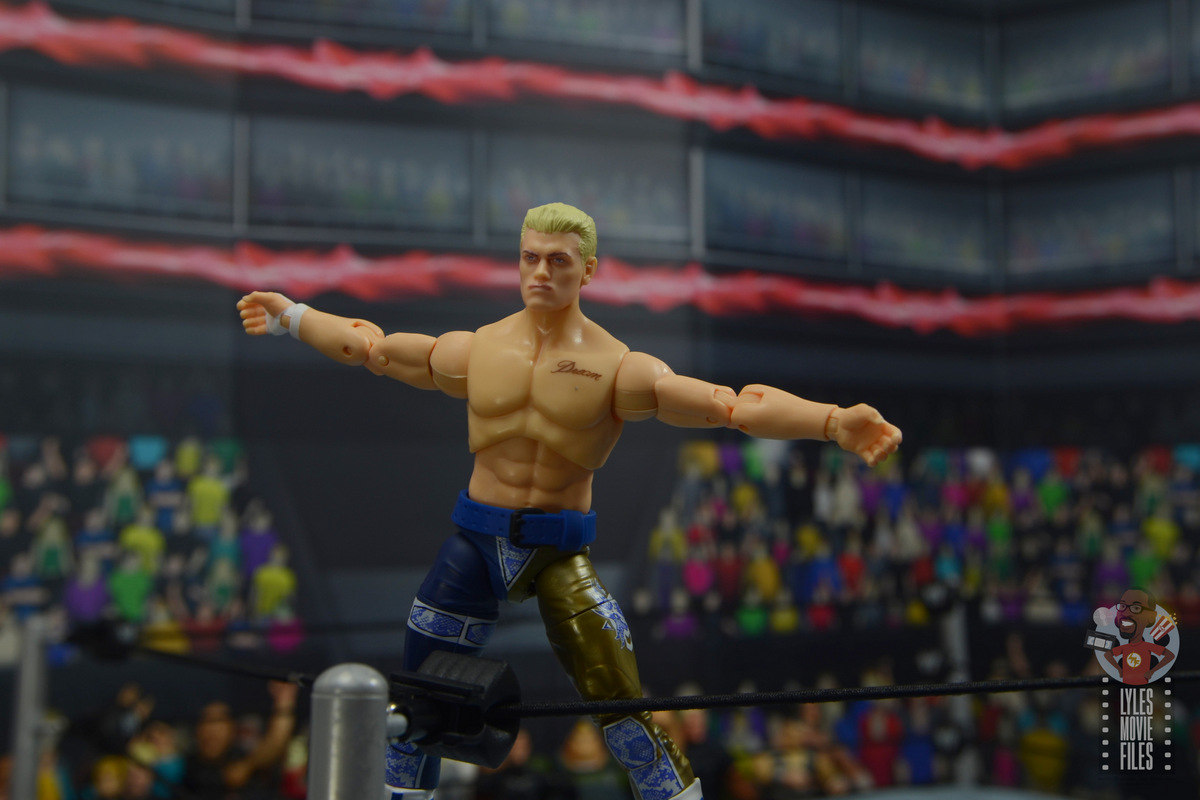 For Cody, the snarling expression doesn’t match his normal cocky persona. A smirk or a smile like the picture would have been better. Still, the likeness is there and I absolutely wanted a Cody figure without that ridiculously goofy neck tattoo.

The hairsculpt came out nice and I love the sunken in eyes. WCT’s basic body matches up well with Cody despite the aspirational abs. The arms have the right amount of definition and the torso looks just right — not too thin or too thick. 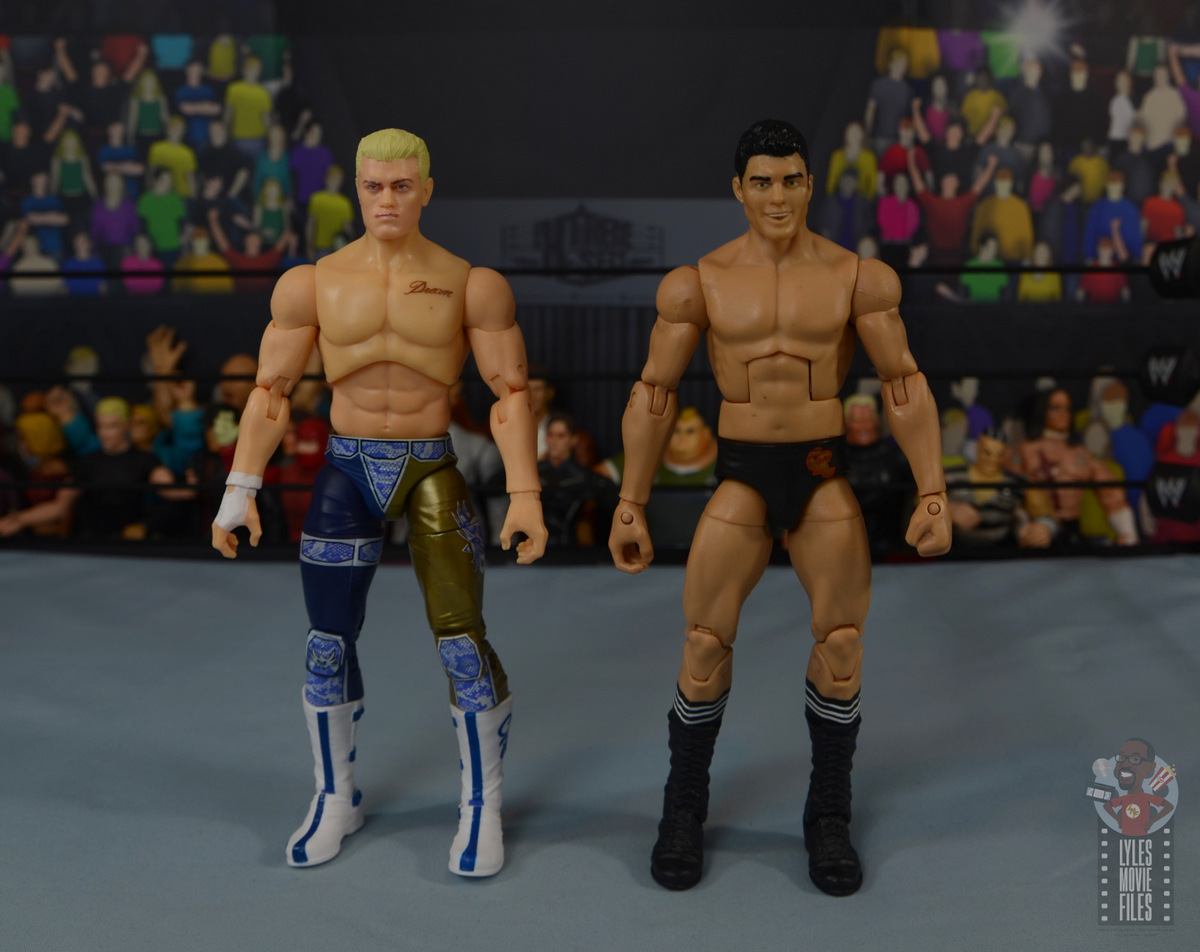 Comparing it to some of the Mattel Elite head sculpts, this likeness isn’t bad, but again the expression throws it off.

Scale:  Cody is about average height at 6’1 so he’s taller than fellow Elite member Kenny Omega and rival Chris Jericho at 6’ and the Young Bucks at 5’10” and 5’11”.

That weirdly makes Cody the tallest member of this wave. It’ll be interesting to see how WCT sticks to scale specifically so we don’t have Darby Allen looking the same size as Cody. 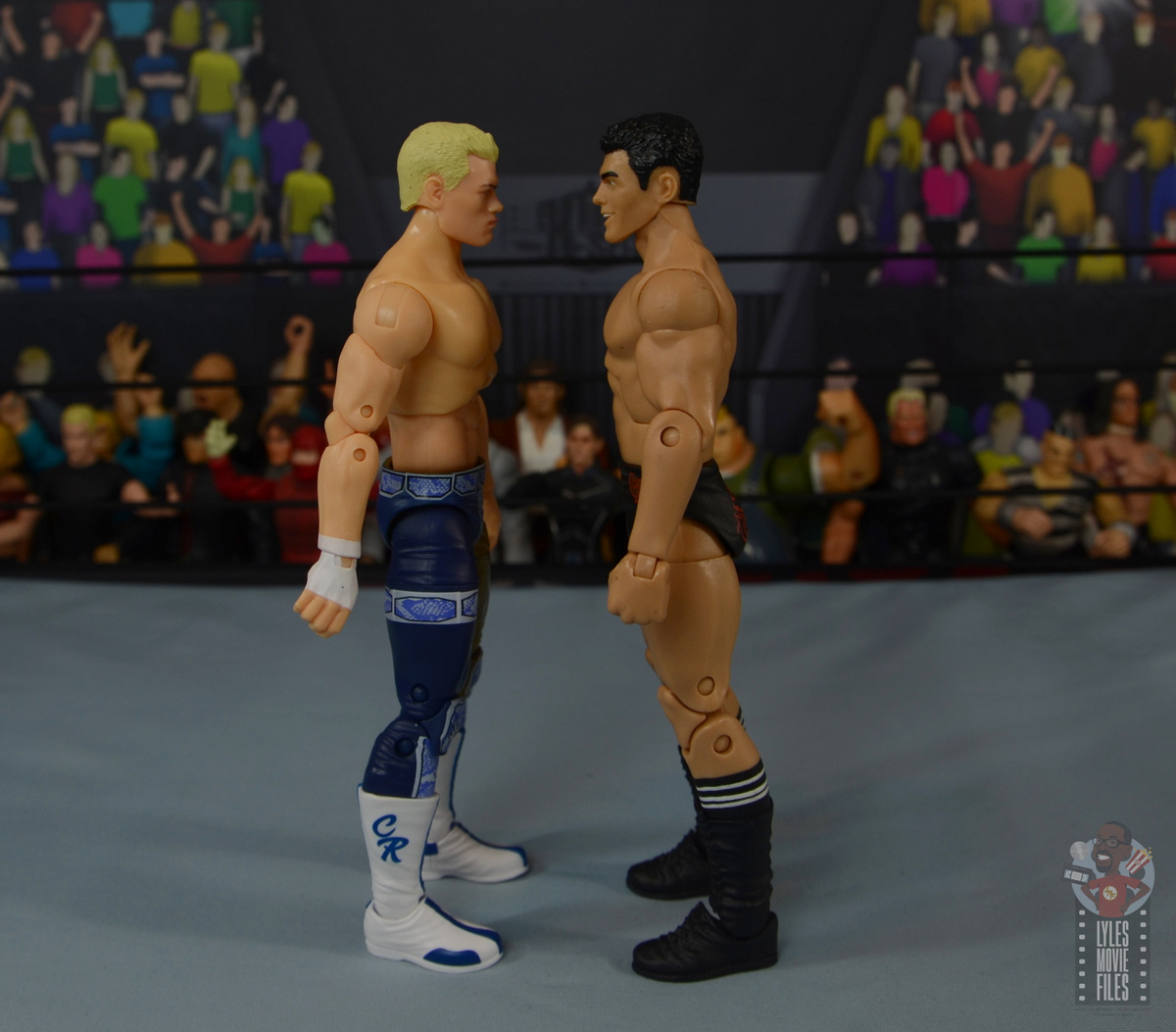 Paint:  WCT admitted they botched the skin tones with this first wave resulting in a sickly skin tone for Cody. Ordinarily, I’d wait for an improved version, but every Cody from this point on should have the neck tattoo. 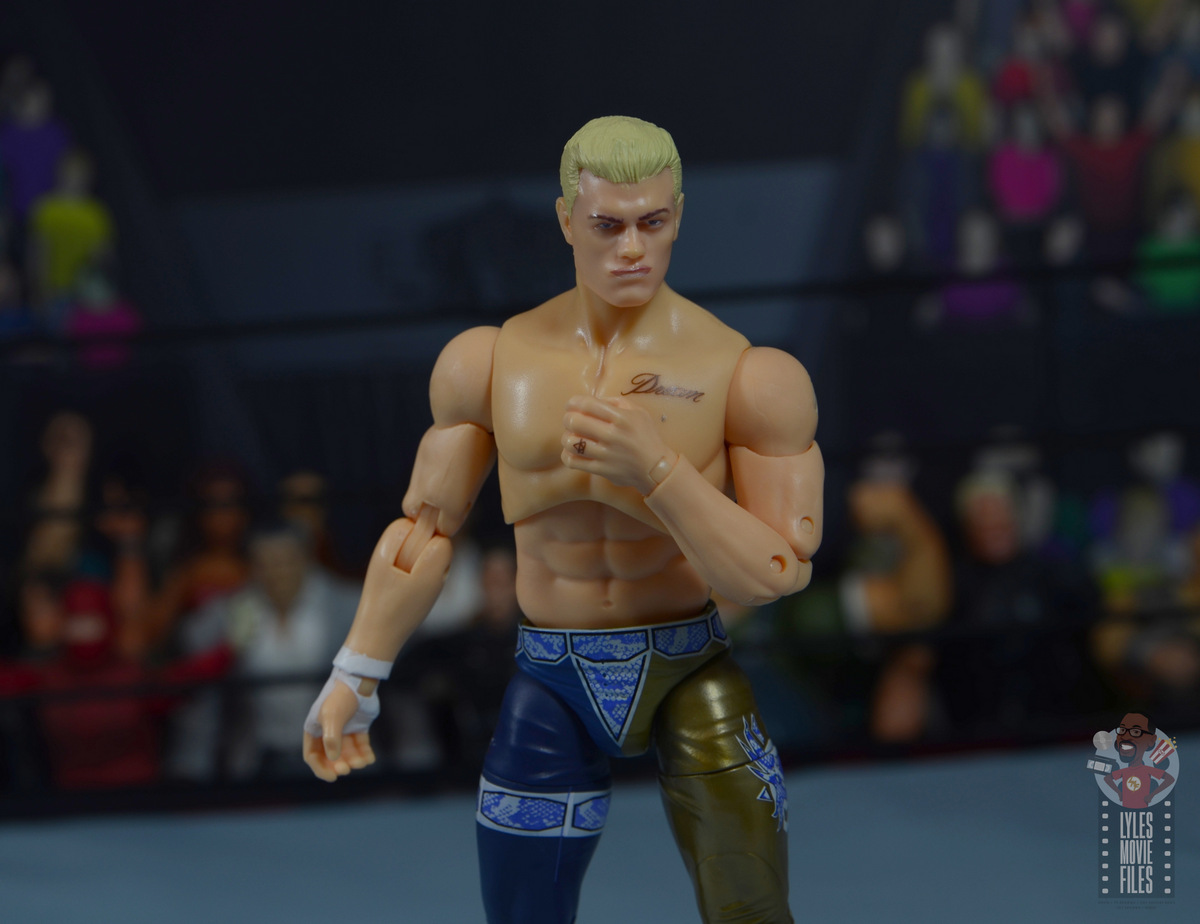 The tight design came out really nice especially with the patterns along the waist, the thigh and knees. It looks like a snakeskin pattern and was laid out impressively.

Cody’s American Nightmare logo also came out clean. The boots surprisingly didn’t have any slop or overspray with the blue running through the white. 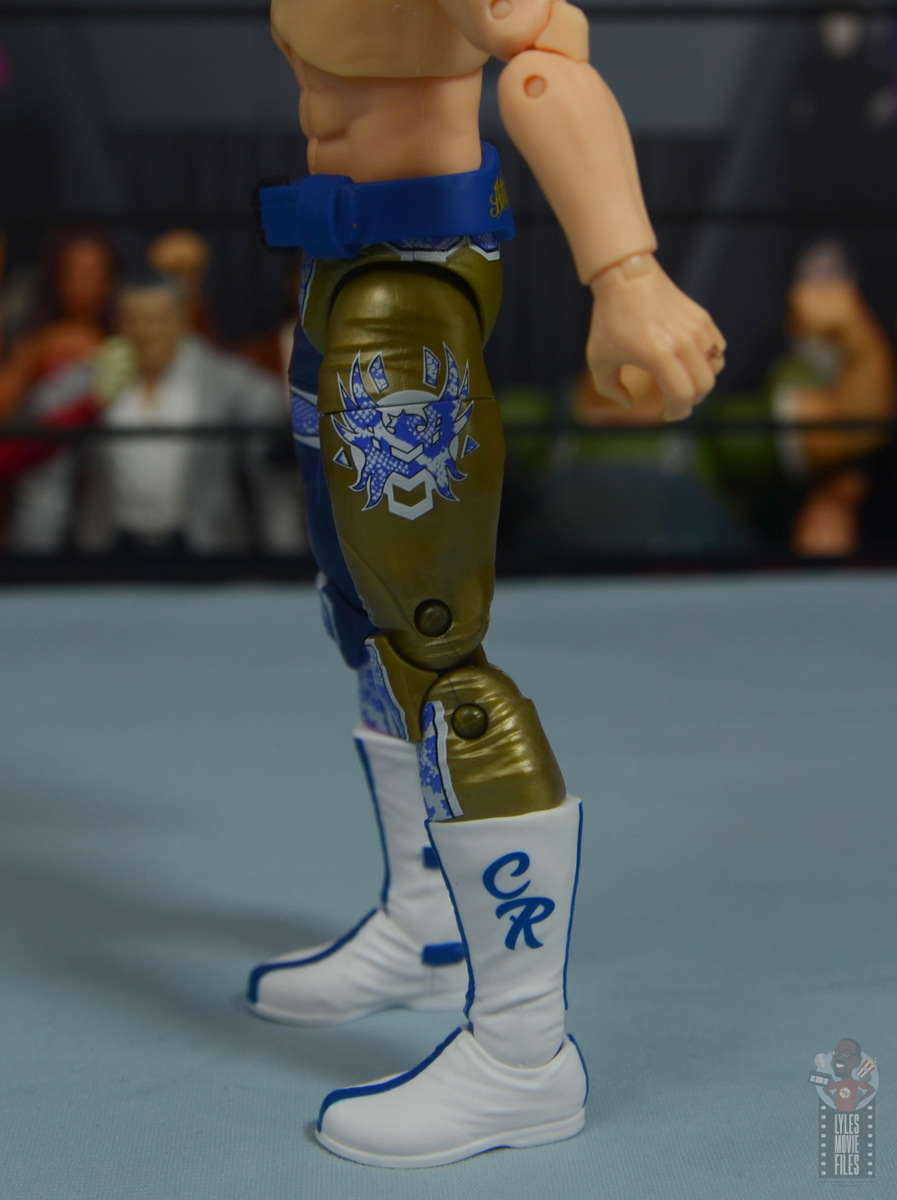 Articulation:  If you’ve regularly been collecting Mattel’s Elite line you’ve got a good idea what to expect here with a few improvements namely the double-jointed elbows and tilting torso. 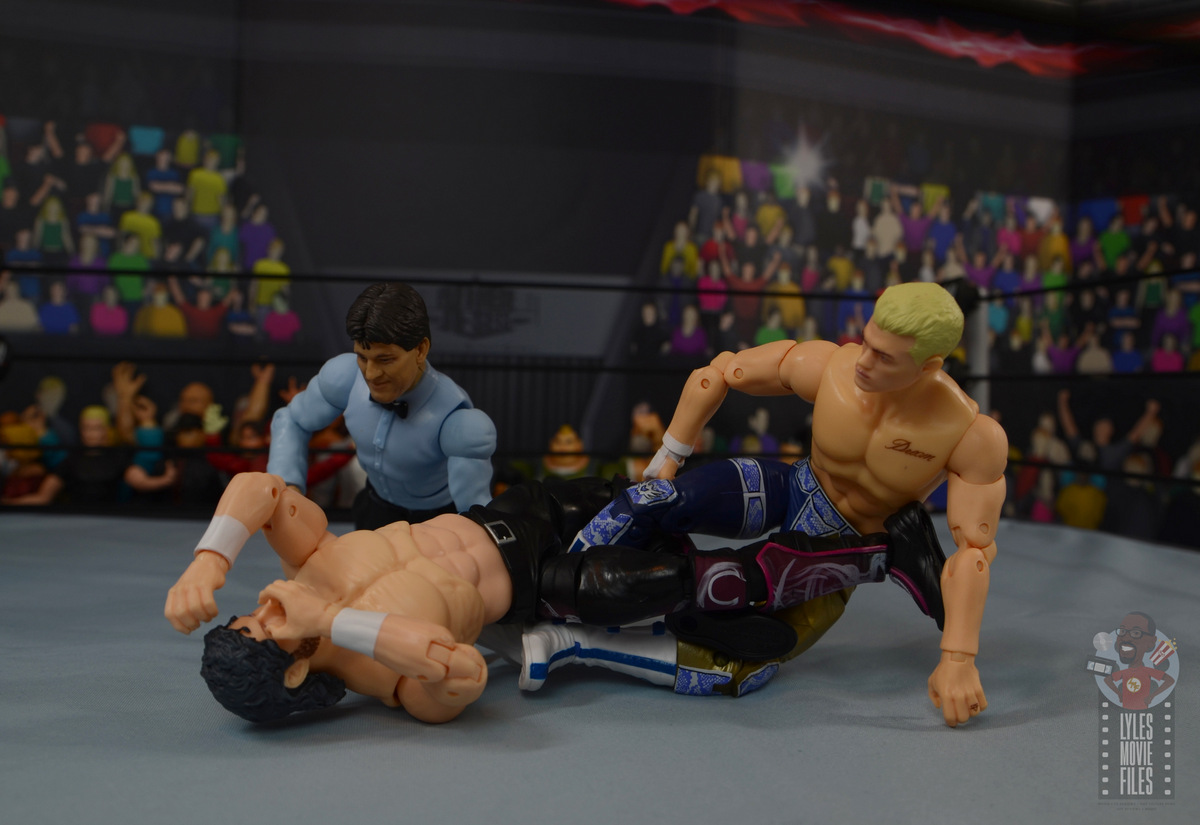 I would have liked for WCT to go a step above the expected wrestling figure articulation and add some butterfly shoulders to make submission moves easier. But wow, the double jointed elbows add so much to these figures’ movement. I was able to pull off a decent muscle buster and the bigger surprise was being able to do Cody’s American Nightmare finisher in large part thanks to the elbows. 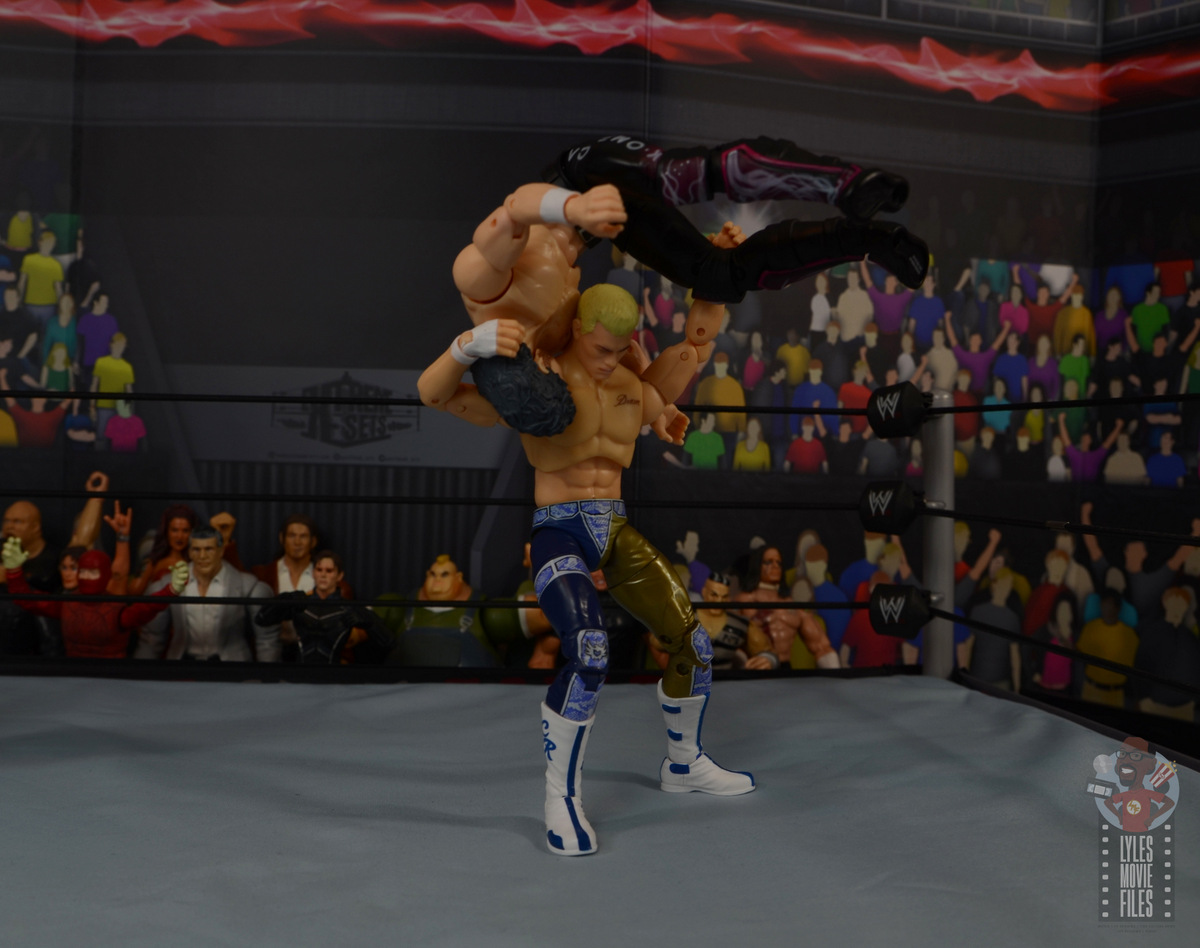 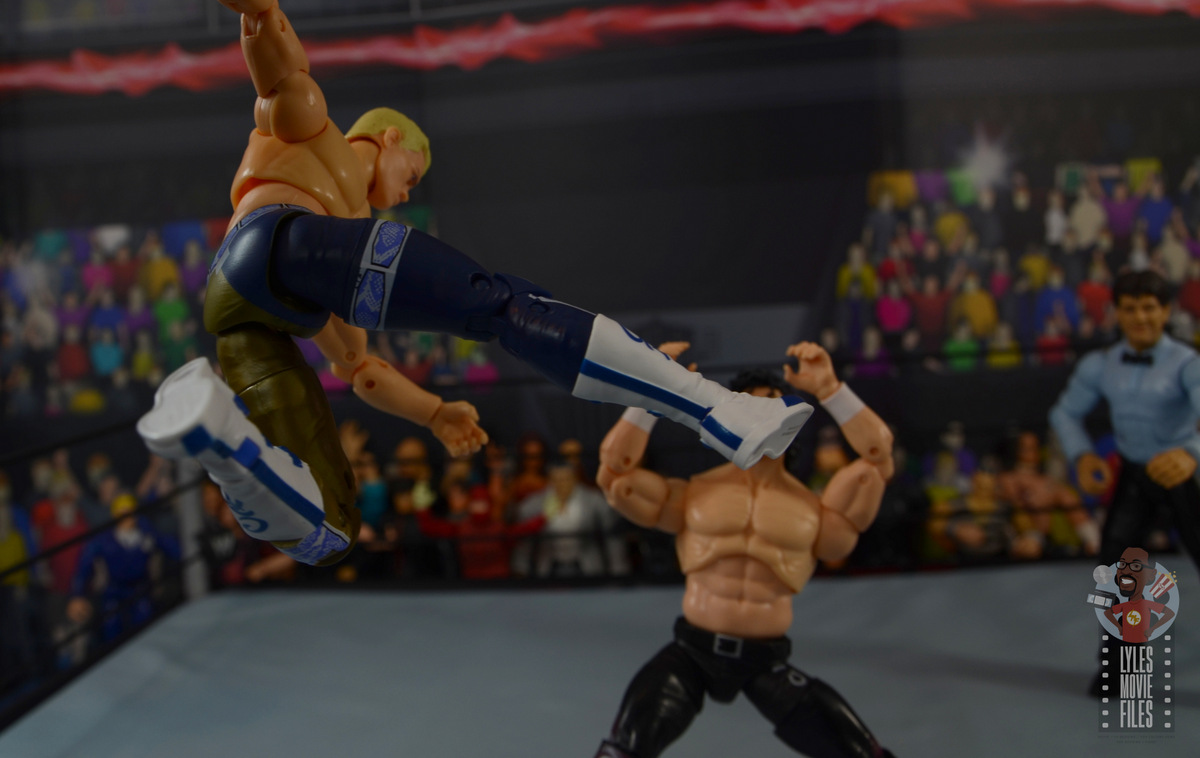 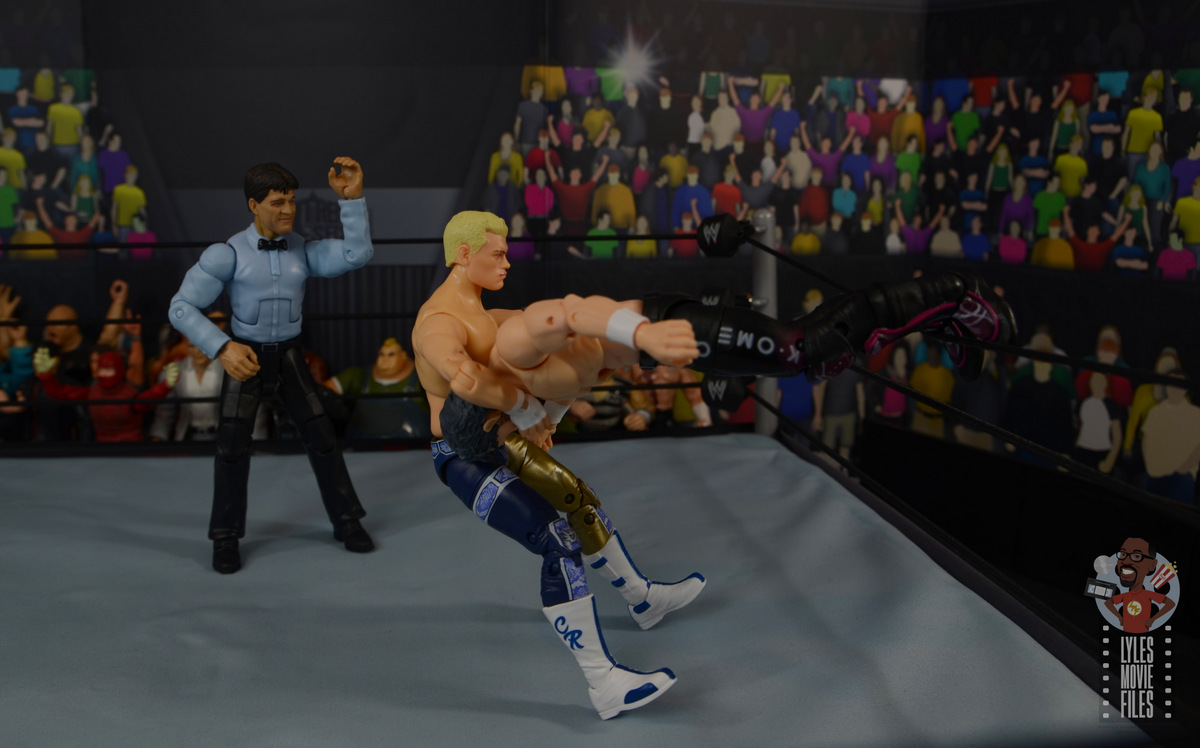 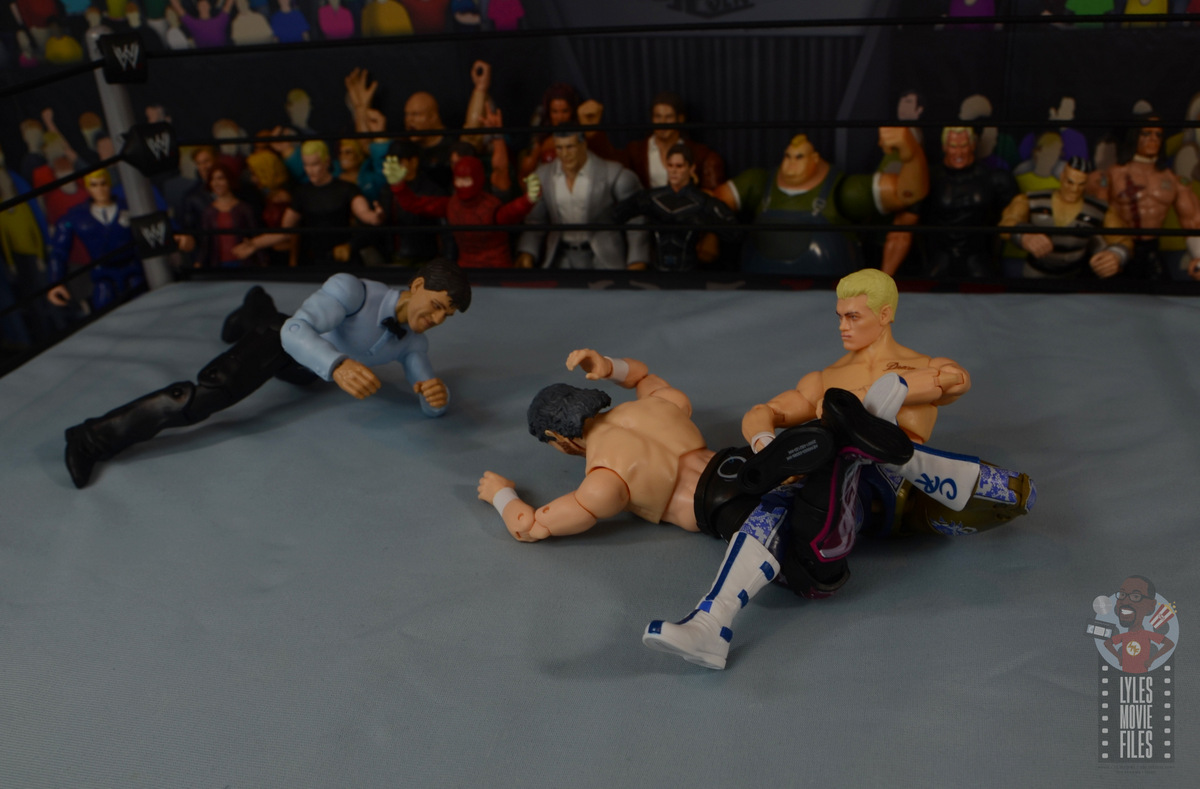 Accessories:  WCT isn’t breaking the bank on accessories. Cody comes with a sledgehammer. It looks pretty similar to the old Jakks version.

I guess we could also include Cody’s weight belt as another accessory, but for a guy that pretty often wears some comic book/video game-inspired attire and swank ring jackets, a one-off weapon is kind of lackluster. Besides, it’s not like Cody comes with the throne to smash as well.

And because it is the only accessory I should add the top was black not silver. 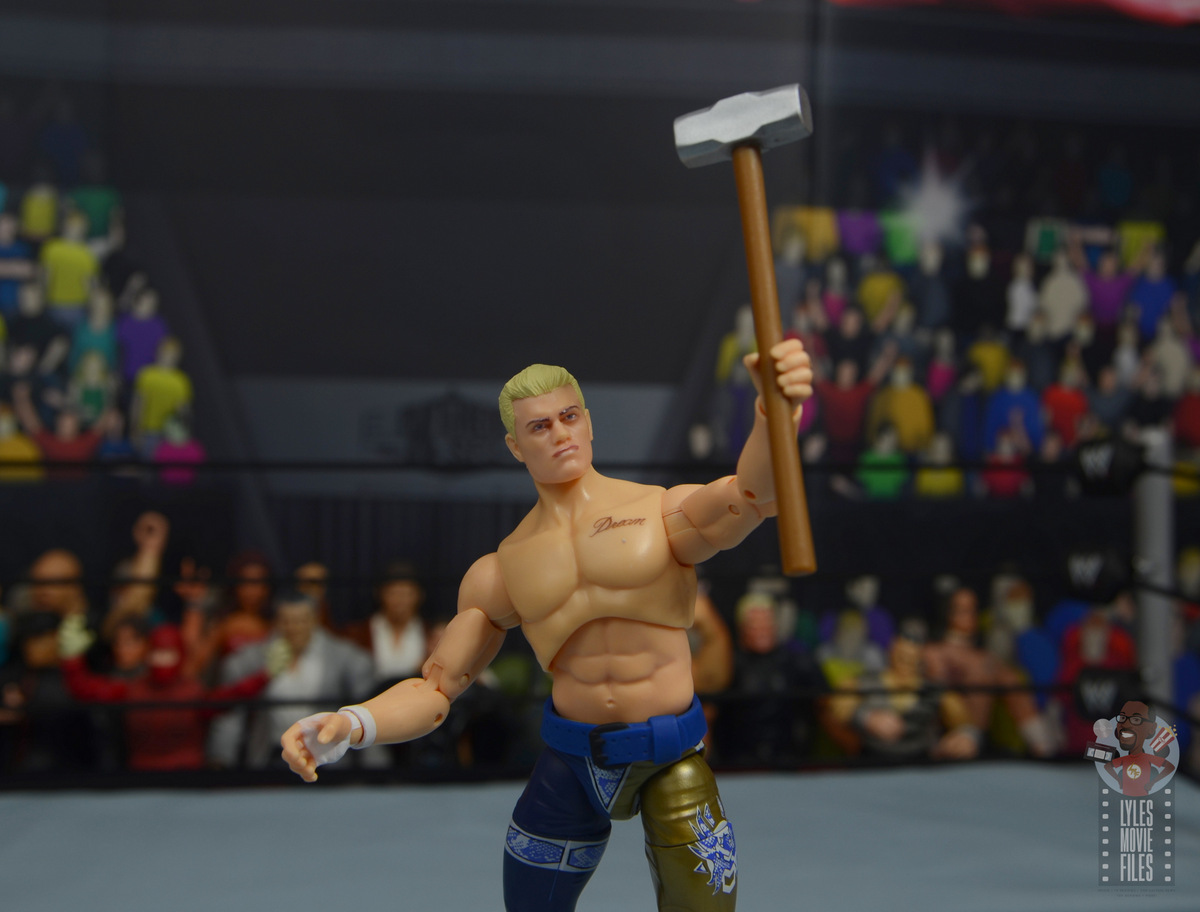 Worth it?  Cody is $20. That price is pretty comparable to Mattel’s Elite line from a few years ago before they started incorporating extra heads, hands, cloth shirts and other accessories.

The AEW figures aren’t a bad deal, but they seem lacking compared to most of their peers at this point.

Cody was my second AEW figure and I’m coming away very impressed by this articulation model, which Mattel should probably try to adapt ASAP. Once WCT fixes issues like the skin tone and includes a better mix of accessories with the most fitting head sculpts (and figure availability) this line could really be special. 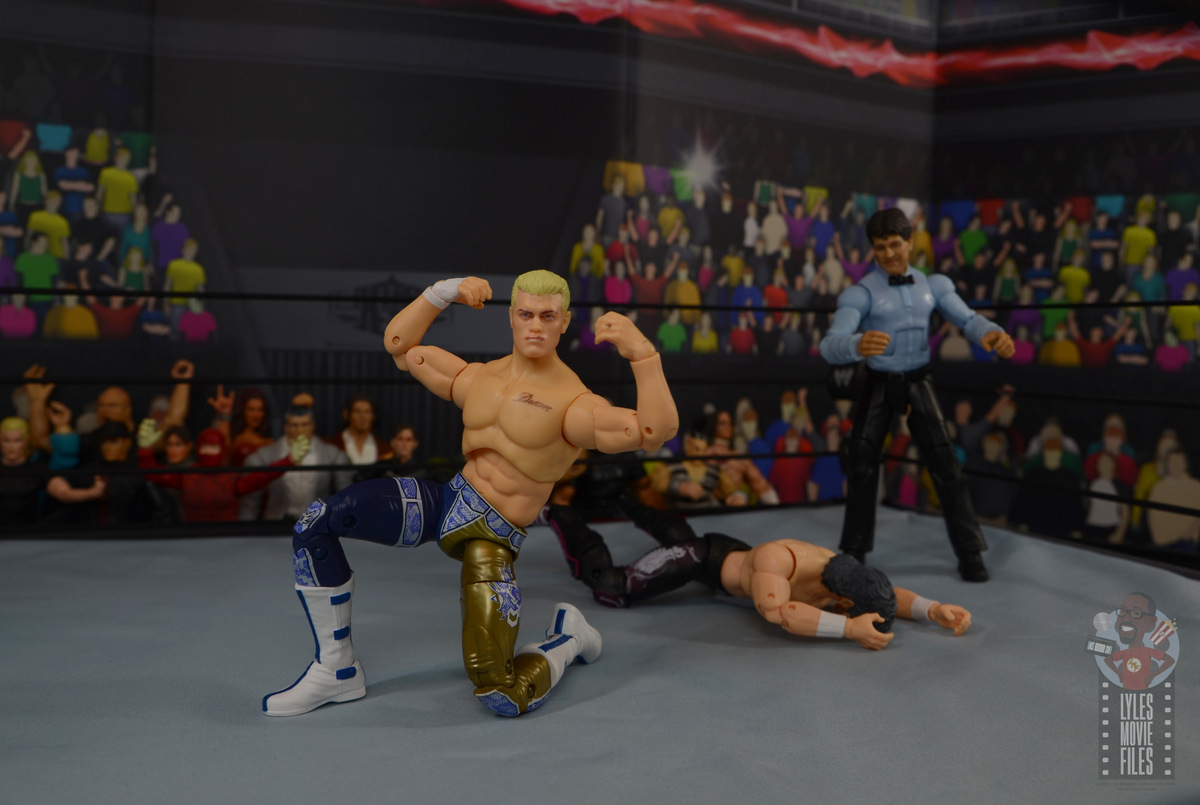 Where to get it?  Theoretically you should be able to find these guys at Wal-Mart, the exclusive home of the AEW line at least for 2020. That’s a bad deal for the AEW line as Wal-Mart has never been as prolific as stocking its exclusives as compared to Target, Walgreens or GameStop.