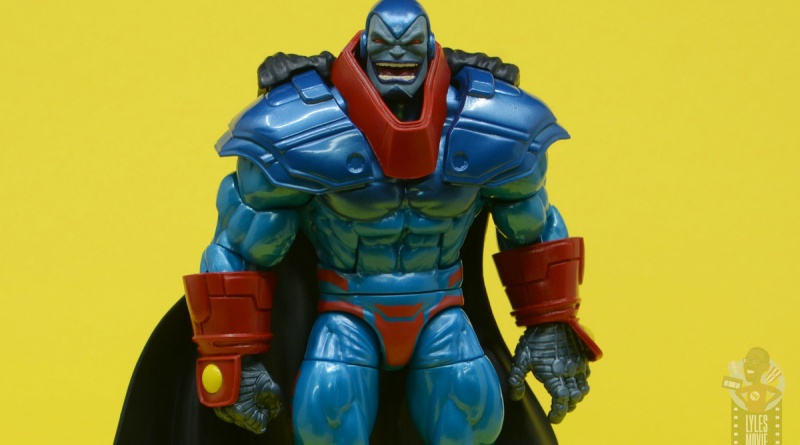 It’d be silly for Hasbro to crank out a wave of Age of Apocalypse Marvel Legends figures and not have plans for the big man himself. Instead of making him the Build-A-Figure to the first wave, Hasbro opted to make him a deluxe release. This does make me question the omission of an AOA Magneto to pair with him, it does make the X-Man figure useful. Let’s see if this figure marks the end of my collection or a welcome centerpiece of the AOA display.

Packaging: Naturally Hasbro had David Nakayama handle the package artwork to stay consistent with the rest of the series. It’s a powerful image with the right perspective of looking up at him.

The bio is actually pretty good save the mention that this is an alternate world where he’s taken over everything. 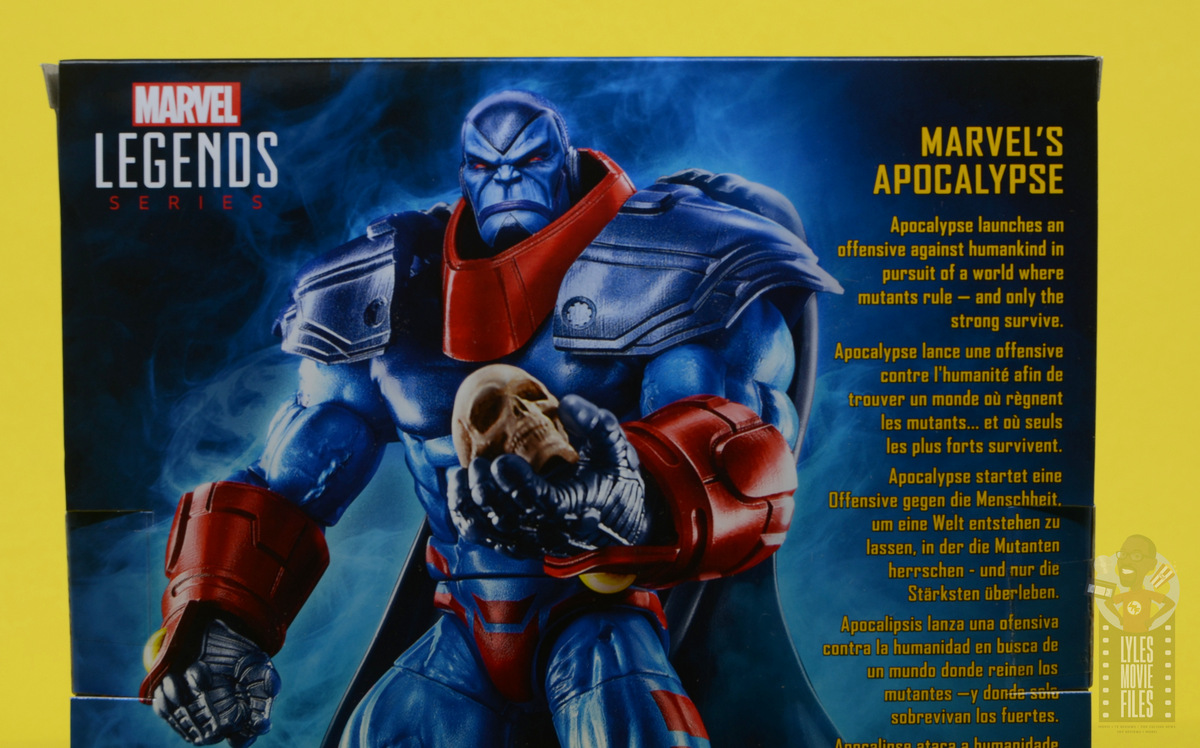 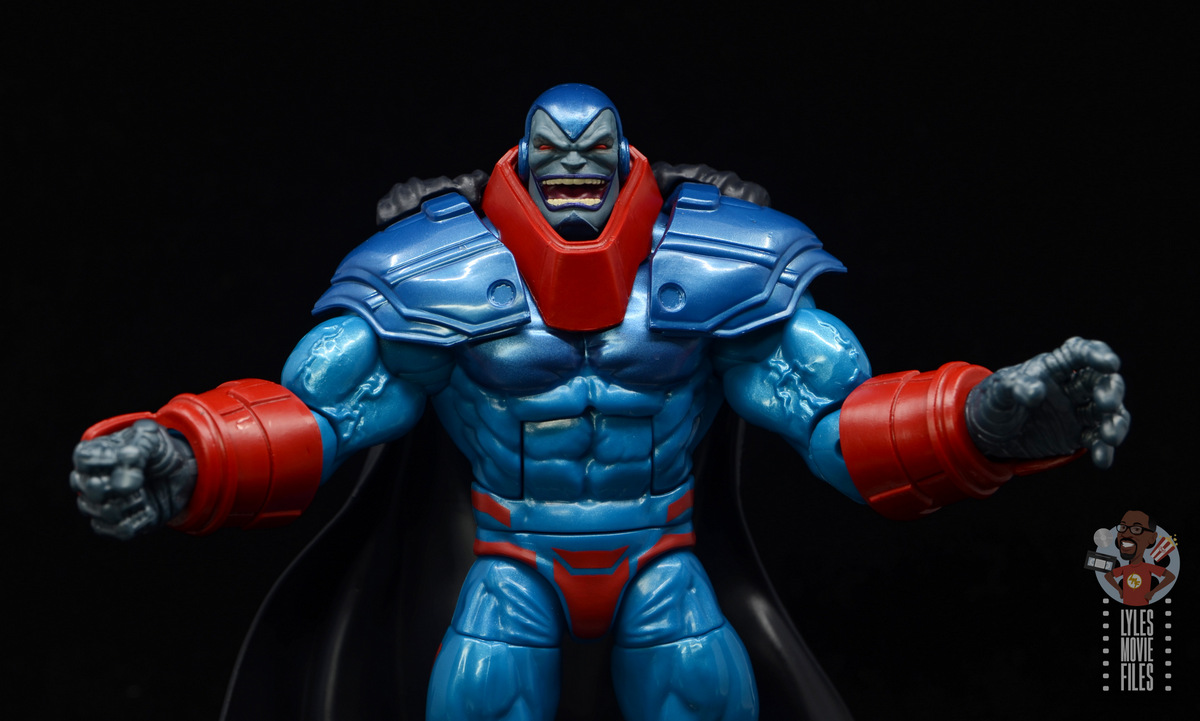 The shoulder pads give him the added bulk and the collar closes tighter around his neck, but it frames his head well instead of making it look tiny. 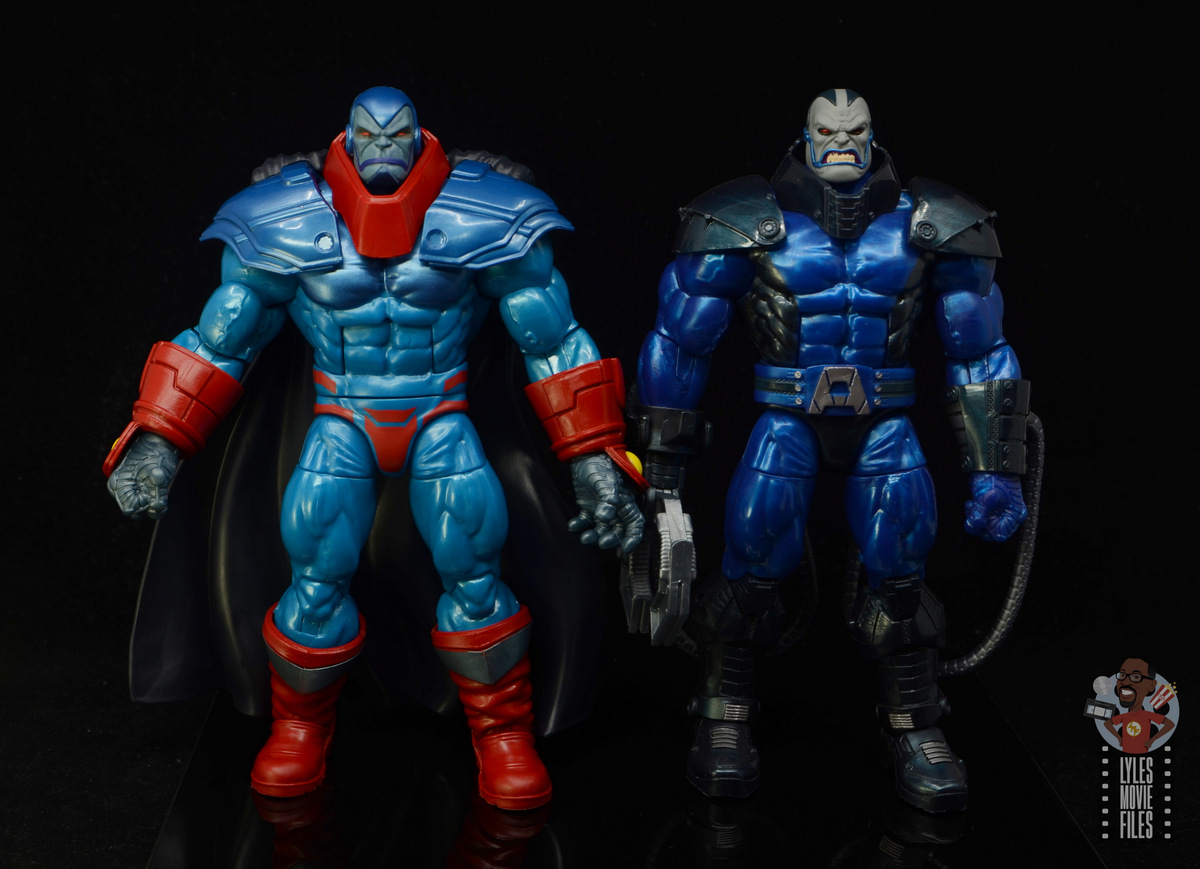 I like the bulky gauntlets and boots and all around he looks similar, but distinct enough from the original Apocalypse release. 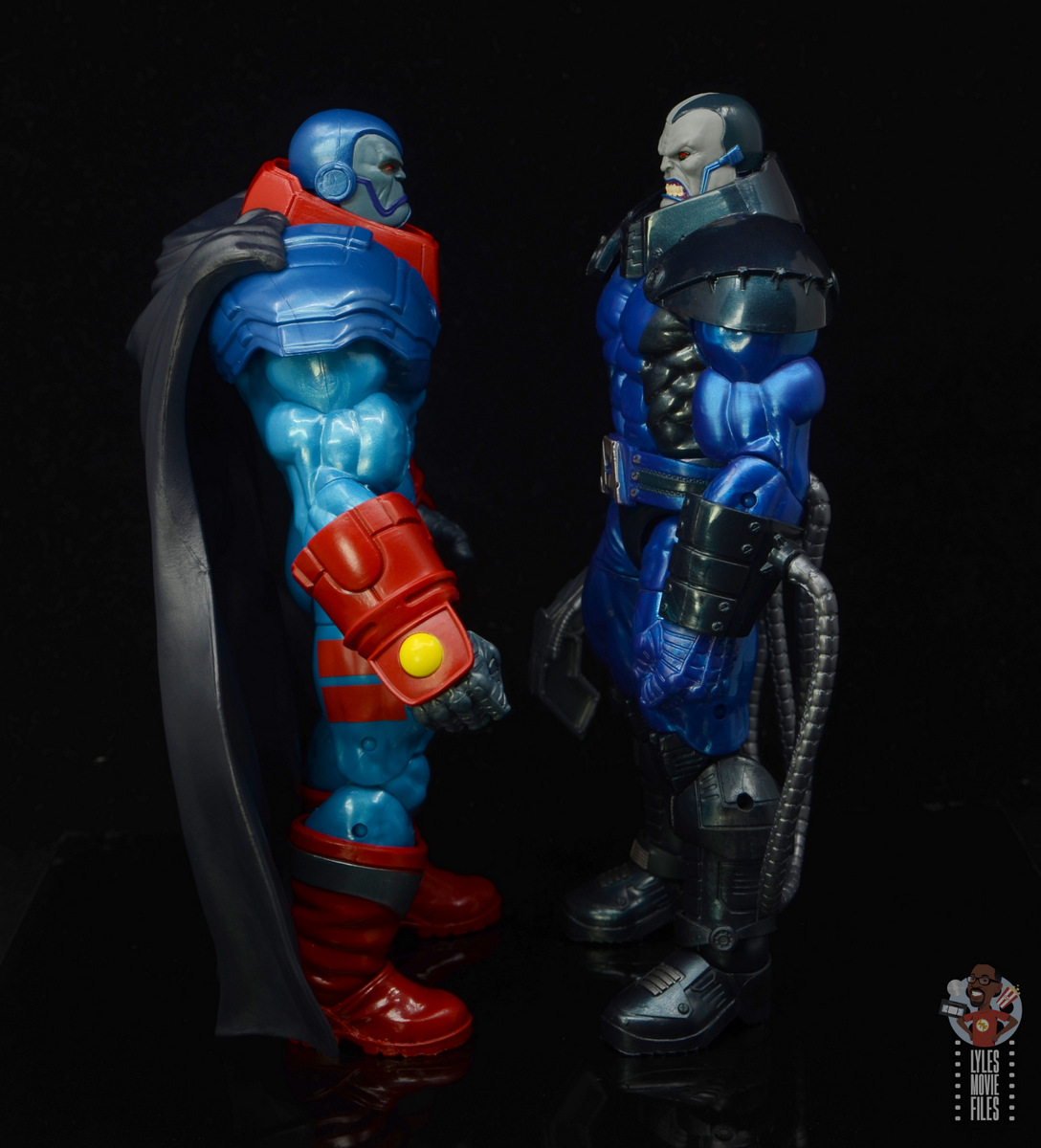 Paint:  Apocalypse’s color scheme was basically various shades of blue, red and grey. I like the sheen given to the main blue. It pops and contrasts nicely with the bold reds on the collar, gauntlets and boots.

The dark blue on the shoulder pads, upper chest and cape also stand out. All of the fine details like Apocalypse’s teeth, tongue, the yellow globes on the gauntlet and the silver panels along the boots came out very sharp. 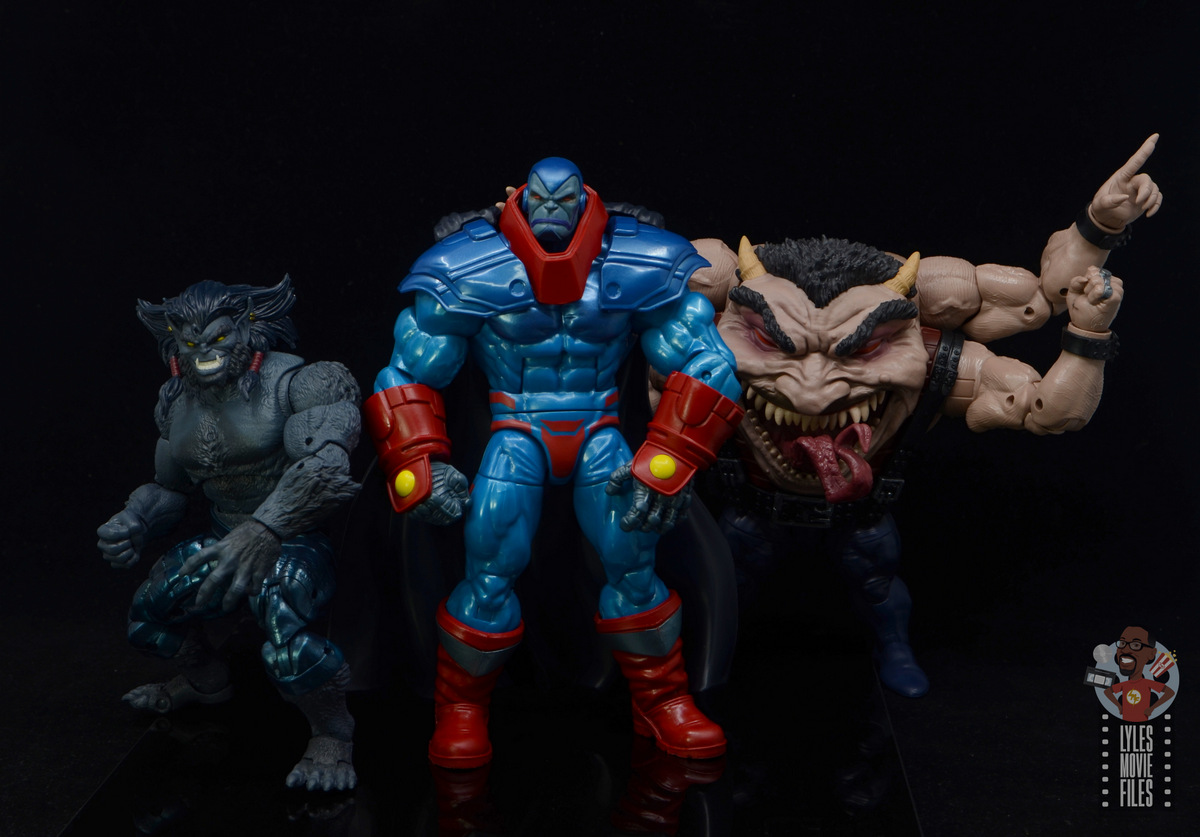 Scale:  Apocalypse was portrayed as a massive, towering behemoth in the series and that’s reflected well with his figure. Save for maybe Colossus and Holocaust, Apocalypse should be the biggest figure in this sub-line.

Articulation:  Apocalypse has decent articulation. For most of the story, he posed more than he fought, but it’s nice to be able to put him into action against the AOA X-Men so far. The shoulder pads aren’t terribly restrictive, but the gauntlets definitely hold back his elbow range. 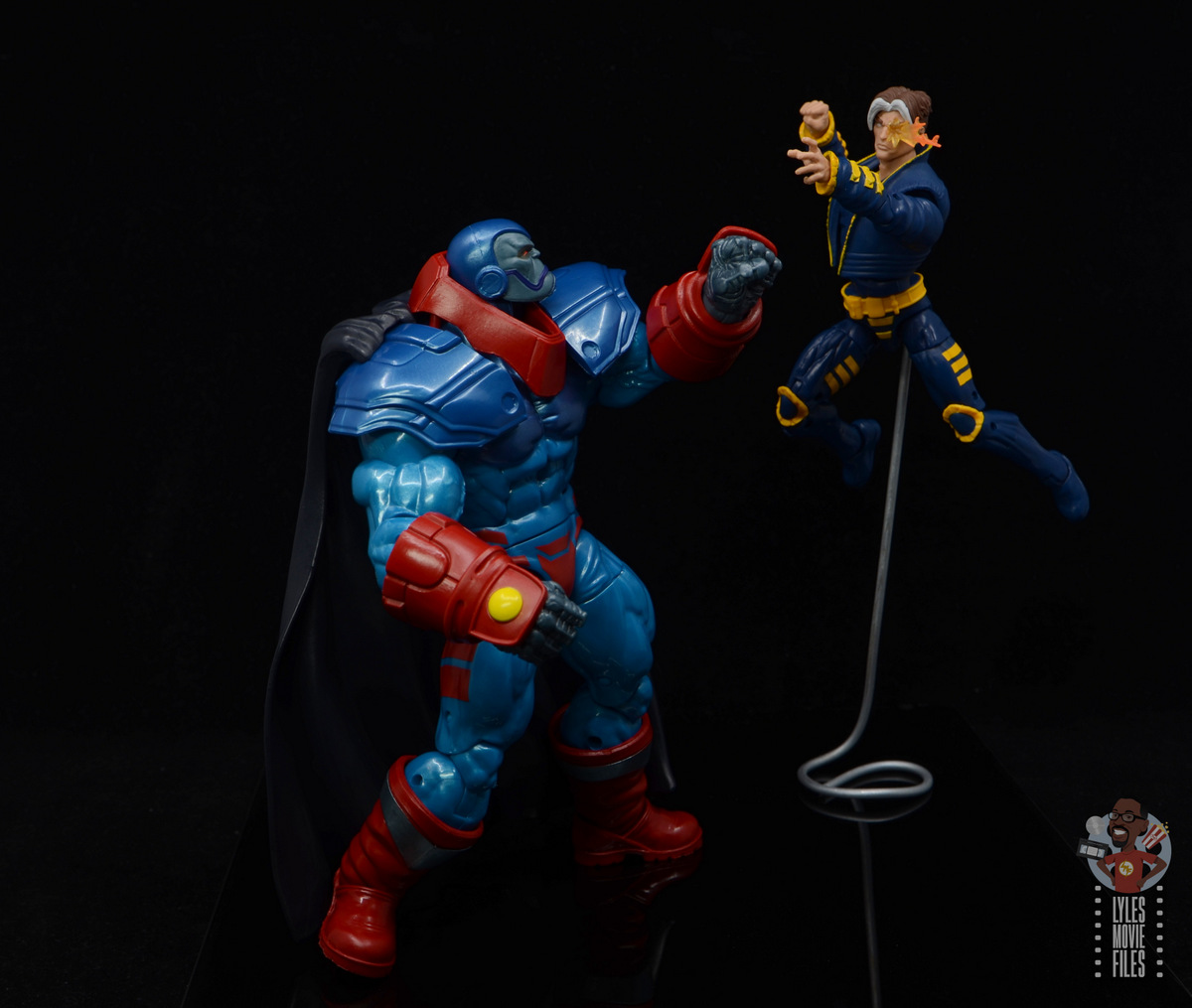 Some collectors complained about Apocalypse having a floppy torso. Mine was somewhat loose, but the bigger issue was his hip joints weren’t as tight as I’d like. That led to some unintended splits, which in turn led to his cape popping off. 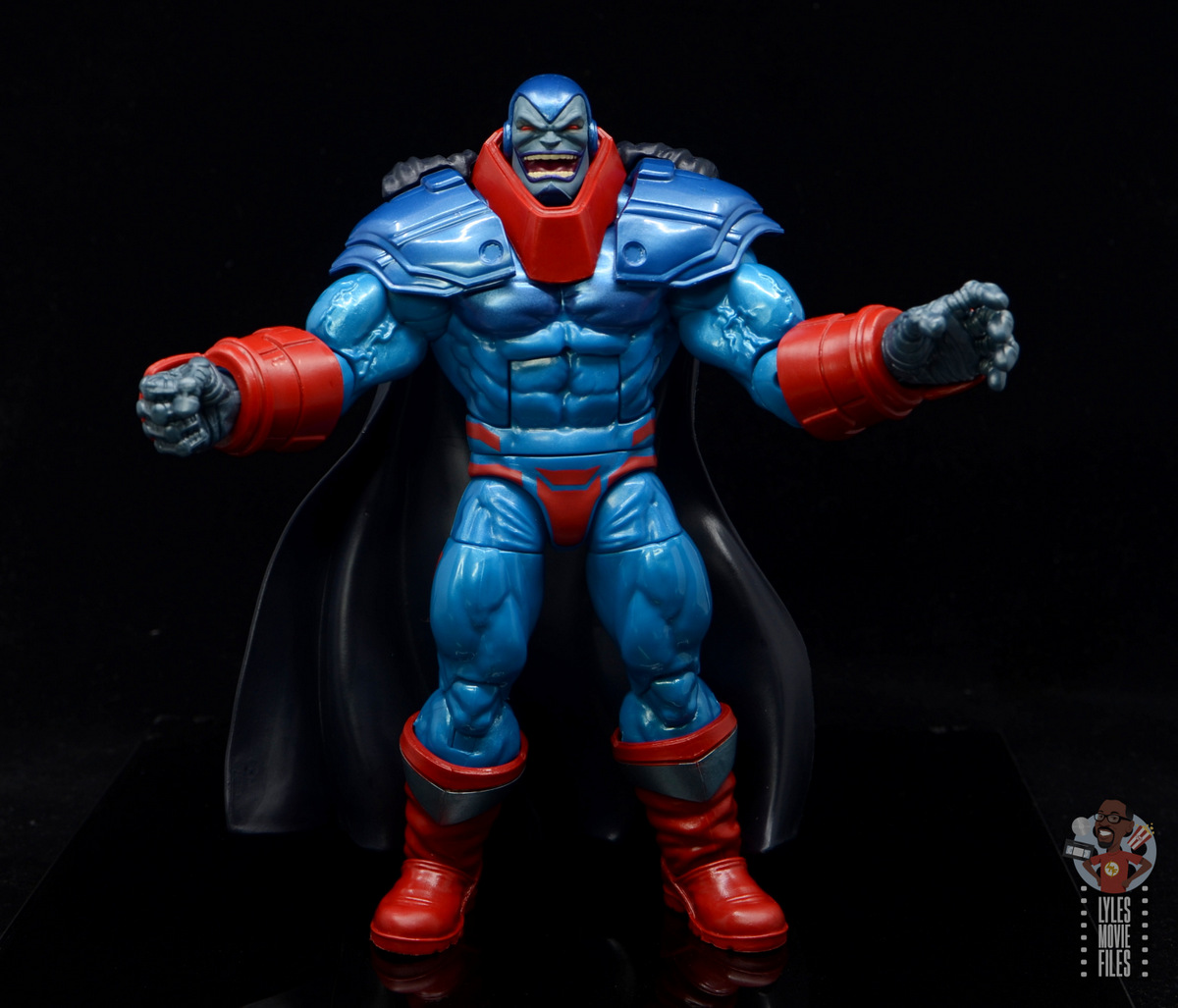 It’s not in terribly tight and doesn’t need much to come off. That’ll need some super glue. Apocalypse wasn’t really in the action that much, but it would be nice for his cape to have the decency to stay in place.

Age of Apocalypse has: 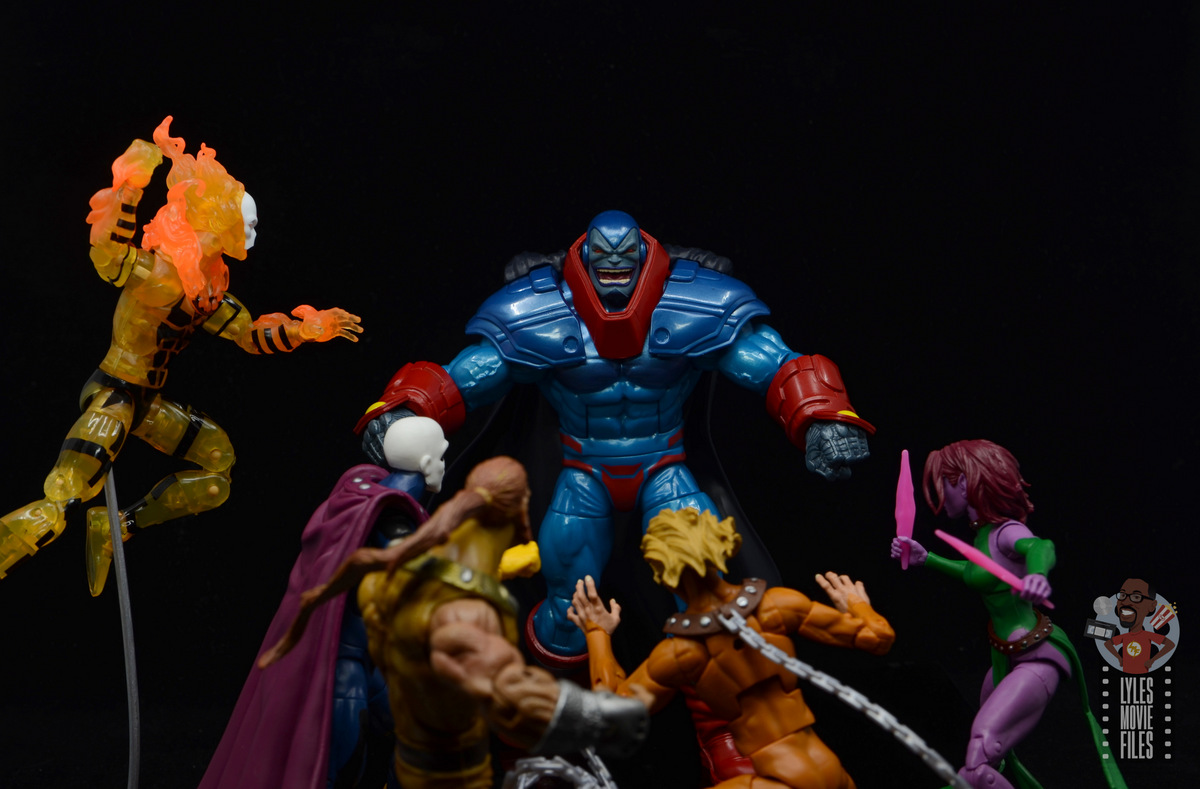 Accessories:  As a deluxe figure, Apocalypse is essentially a Build-A-Figure, but he does come with a good amount of accessories. 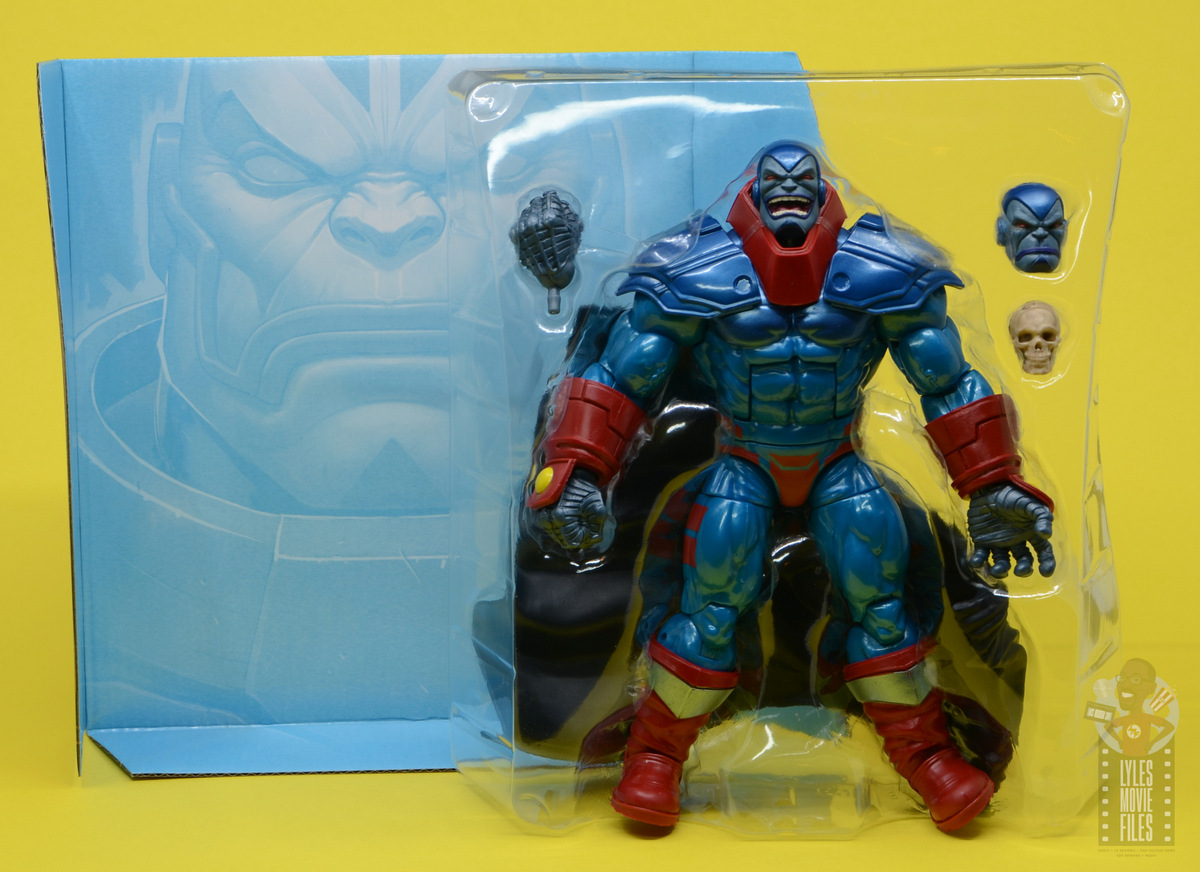 He’s got an alternate, more serious head. I like whenever Hasbro provides another option especially when they’re so different from each other.

Additionally he’s got a skull to cradle in his open left hand. The skull had a wash to further bring out the details including that dent at the top. 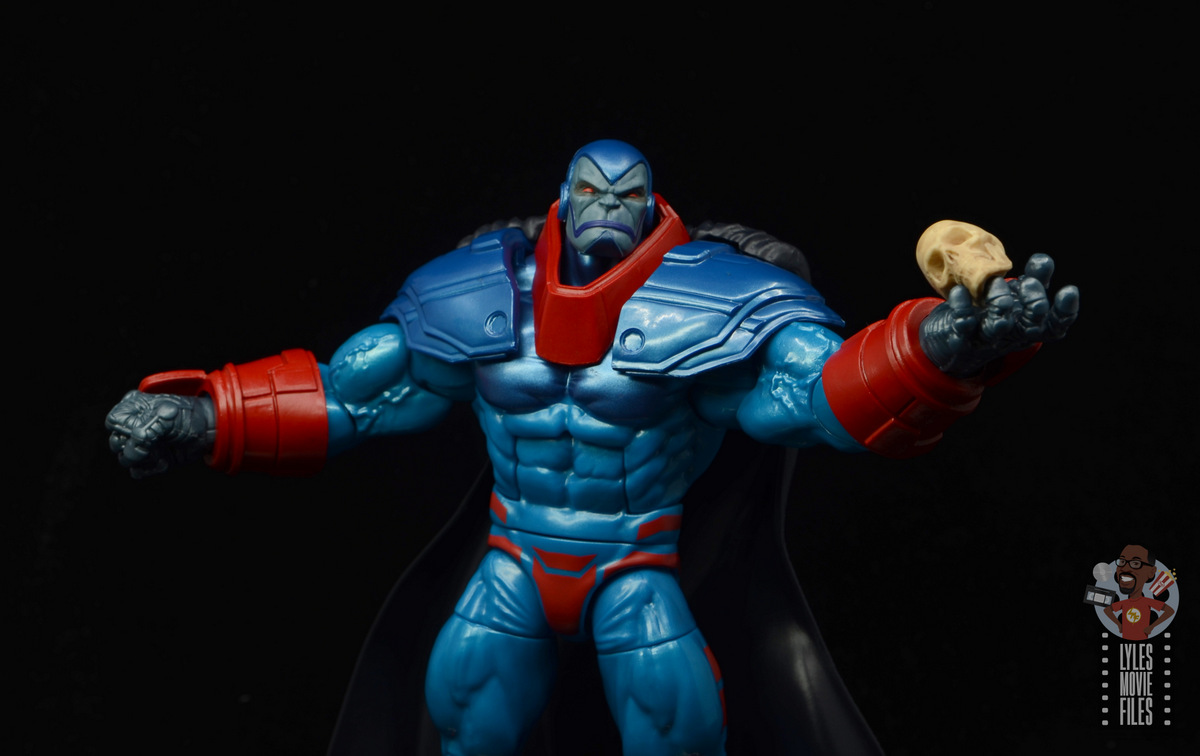 Finally he has a left hand fist to match the right hand. I’m surprised Hasbro didn’t include an open right hand as well.

Worth it?  Apocalypse is going for about $30 from most retailers. I think that’s a pretty fair price given that he’s clearly worth $10 more just in plastic alone from a standard figure.

Loose joints are always frustrating, but Apocalypse looks every bit the imposing, dominating force he should be as the centerpiece of an Age of Apocalypse display. I still would welcome more range in the elbows and a cape that stayed on would be a bonus. 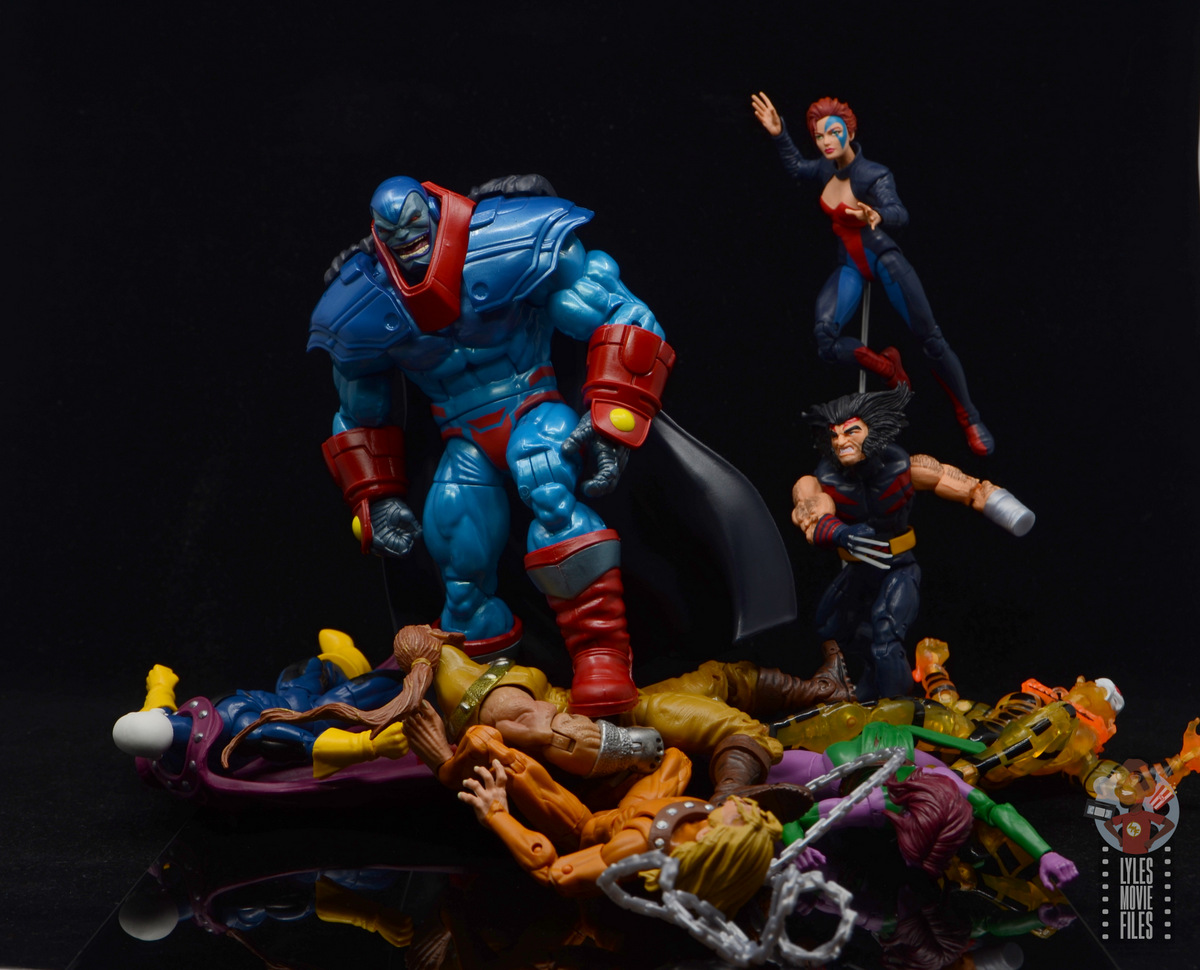 Where to get it?  I’ve seen Apocalypse at Target, but if you’re having trouble, he’s also available at Amazon and Entertainment Earth.