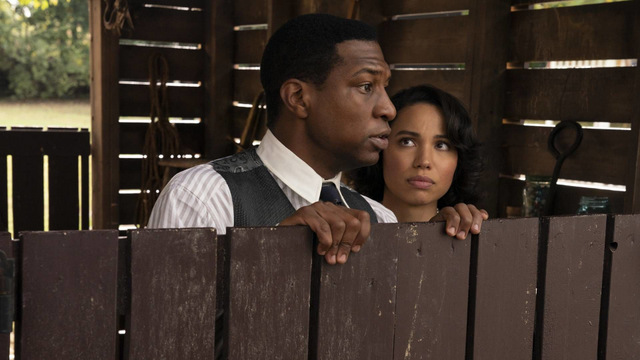 They can’t make many TV episodes as great as Rewind 1921. Not because showrunners don’t want to create an indelible, captivating and unforgettable hour of television. It’s just they’re not able to weave so many emotions, call backs to earlier subplots and the sense that anything can happen like this penultimate episode of Lovecraft Country.

In a lot of ways it reminded me of some of those classic Game of Thrones episode 9 seasons where so much happened I needed time to decompress and take it all in. This felt like an achievement more than just a well crafted 60-minute lead in to the season finale.

Capt. Lancaster’s curse was doing more than mentally overwhelming Dee — it was slowly turning her into Topsy. There was something far more insidious about his actions this episode than what he did last week. Lancaster was basically turning Dee, this fierce, creative and well-rounded young black woman into a harsh, dancing caricature. Sometimes there’s these anger-inducing moments while watching Lovecraft Country that makes it feel like nothing has changed since the 50s. 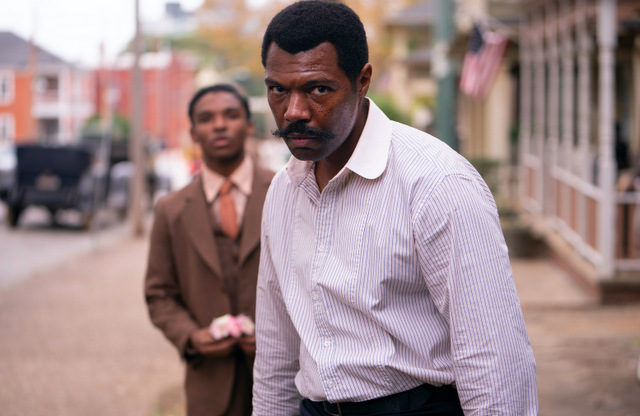 On the plus side at least we got to see Lancaster die a brutal and agonizing death. He didn’t get killed at Leti’s place and his police gang rounded up black men to fuse with what was left of Lancaster’s body (in a more gruesome fashion than Get Out) but the magic wasn’t taking. Christina as William walked in to his office just in time to watch Lancaster die for good. Peace.

Tic, Leti and Montrose had gotten desperate as Dee slowly faded away and Ruby suggested Christina could help. Christina and Ruby’s relationship still feels a bit weird. Ruby doesn’t seem like she’d be fine with a white woman killing a black man so she could be immortal even if Christina can provide her with a privilege potion.

While unable to remove the curse, Christina was able to reset it giving the gang more time to use blood of Dee’s closest relative to heal her. This led to that uncomfortable conversation Montrose was dreading — telling Tic he might not be his father.

Naturally this sends Tic spiraling emotionally. He’d endured too many beatings and cruel life lessons from Montrose for him to not even be his father. All that time Tic imagined how life would have been if Uncle George was his father so this is heartbreaking.

The blood isn’t needed though since Hippolyta makes her triumphant return. She didn’t come rushing right back as she had work to do fixing the time machine with her advance knowledge from traveling the multiverse. There’s so much to unpack with that and it seems like that is 100 percent going to need to be addressed in greater detail next season. 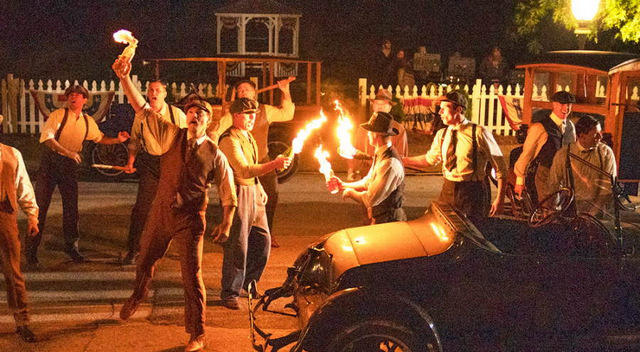 To save Dee, they need the Book of Name and that was burned in the Tulsa massacre. Hippolyta went full superhero triggering a portal that could send the others back to 1921.

Montrose is traumatized having to go back. This was one of the defining moments of his life where he witnessed countless atrocities that have scarred him ever since. This was a big ask of Montrose — who would want to revisit the site of the worst memory of their life — and Tic and Leti had little empathy for what he was enduring just walking down the streets of Black Wall Street.

Tic and Leti did seem impressed looking at the majestic site of these 40 acres filled with booming businesses, beautiful landscape and black people operating in their own space and thriving.

They watch young Montrose getting beat by his father (William Catlett) for putting on a flower on the eve of the Booker T. Washington school prom. Montrose is embarrassed, but he still tries to justify his father’s actions. It’s not an excuse for the whippings he gave Tic, but Montrose viewed them as a way of protecting his son from a fate he’d have to endure a second time before the night is over.

Soon young George and Tic’s mother, Dora, come out to look for Montrose. Time travel is always interesting as movies and shows try to cheat the rules of disrupting the future as needed. In this episode not affecting the past made for a prison of sorts as Tic, Leti and Montrose had to watch the horror they witnessed unfold uninterrupted.

Still, the objective was to get The Book of Name at Dora’s house. Montrose wandered off so Tic reluctantly had to leave Leti to get him. I loved this casual acknowledgment that Tic knows she’s pregnant and her offhand suggestion to name him George.

As the terrorist attack gets underway, Leti narrowly avoids getting caught and runs to safety where Montrose and George’s father and Dora’s father stave them off with their own guns.

Dora’s grandmother, Hattie (Regina Taylor), is suspicious since Leti kept her comfortable shoes from the future and pulls her gun out on her. Leti has to reveal everything including her visit to the past and Tic being the father of her son. 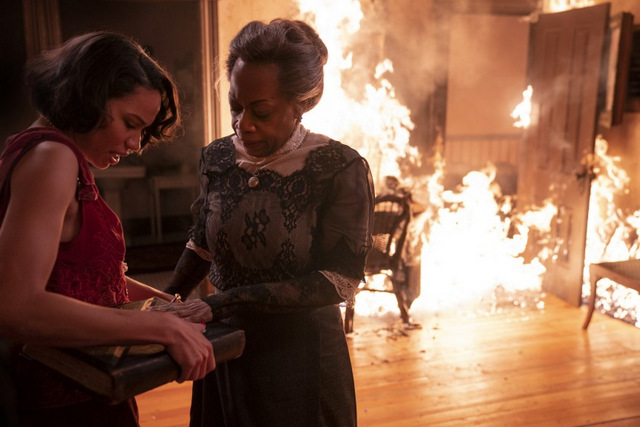 Hattie believes her and gives her the Book of Name. As the house starts getting caught in flames, Leti stays with Hattie as she recites Jeremiah 29:11 stating that Leti’s son will be her faith turned flesh. It’s such a powerful scene and playing Don’t Kill Dub (Poem By Sonia Sanchez) was a brilliant choice as the lyrics state don’t kill your fire, hold and be your fire state more than dialogue could in this sequence.

Tic found Montrose in an alley watching his younger self with his friend. Montrose explains this was when he tells Thomas they can’t be friends anymore because Thomas is gay (in the hurtful slur way) and he’s not. Montrose wants to save Thomas, the first of a long list of sacrifices he made to be Tic’s father. He had to shut off his emotions because men don’t have them. They have sons. The only thing Montrose wanted was to be Tic’s father. He had to be to justify everything he denied himself for so many years.

Man, this was a great scene! It’s emotional on so many levels and is a fantastic payoff to the spoken and unspoken tension between Tic and Montrose.

This episode should rack up a slew of Emmy awards for Lovecraft Country and within these last 20 minutes, Michael Kenneth Williams, Jonathan Majors and Jurnee Smollett all put in undeniable performances to legitimize their Best Actor, Best Actress and Best Supporting Actor campaigns. 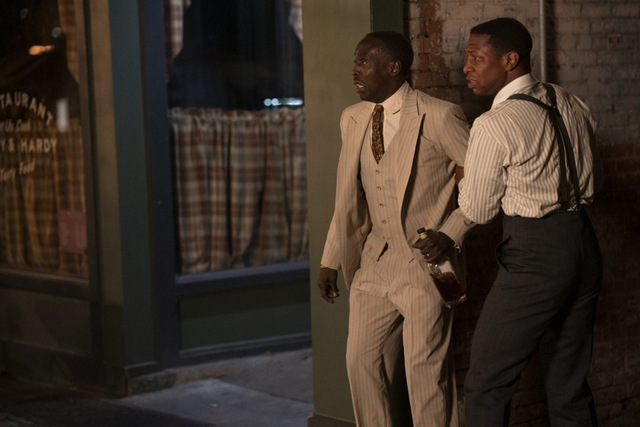 Before they can finish their conversation, a group of white hoodlums corner them and shoot Thomas. George and Dora run over to help as Montrose and Tic watch this life-defining moment for the brothers. But the stranger with the baseball bat that saves them hasn’t shown up yet. Did they screw something up when they came to the past? I got a legit chill when Tic steps and hits the baseball bat on the floor. The realization that he is the one who saved his parents and uncle — whichever one he is — and saying those defining words “I got you kid” put everything full circle.

Tic and Montrose get back to the portal room, but the portal is flashing out prompting Tic to go through to encourage Hippolyta to keep it open a little longer. While it’s temporarily closed, Montrose has to look out at the destroyed community from a different vantage point as he reflects on all the lives lost in a subtle breaking the fourth wall as if he’s speaking to the viewers. Director Jeffrey Nachmanoff made so many incredible choices throughout this episode, but this was the most poignant as it felt more personal.

When she headed to Dora’s house, Leti did one of her now trademark sprints. As she leaves Tulsa, she deliberately walks taking in all of the carnage, explosions, enflamed businesses and dead black people on the streets. There’s a quiet fire raging in Leti now as she is now the fire. 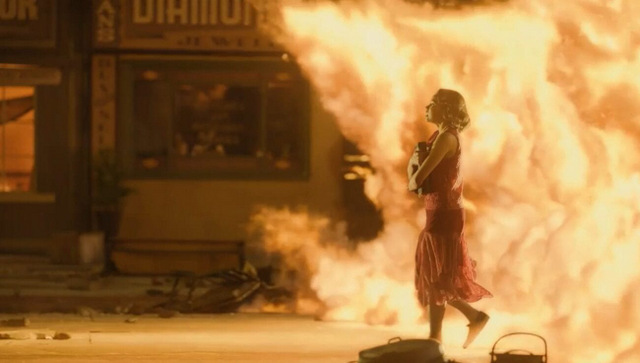 In another fantastic song choice, playing Tulsa, 1921: Catch The Fire by Laura Karpman, Raphael Saadiq & Janai Brugger of The Metropolitan Opera was so so mesmerizing.

Whew. This was phenomenal TV and what I’ll cite as a flawless example of how to set up and payoff a plot thread in the most creative and emotional manner possible. It’s also the episode that makes everything worth it for everyone who may have been confused or befuddled by some of the events throughout the season. I can’t wait to see what happens with the season finale.