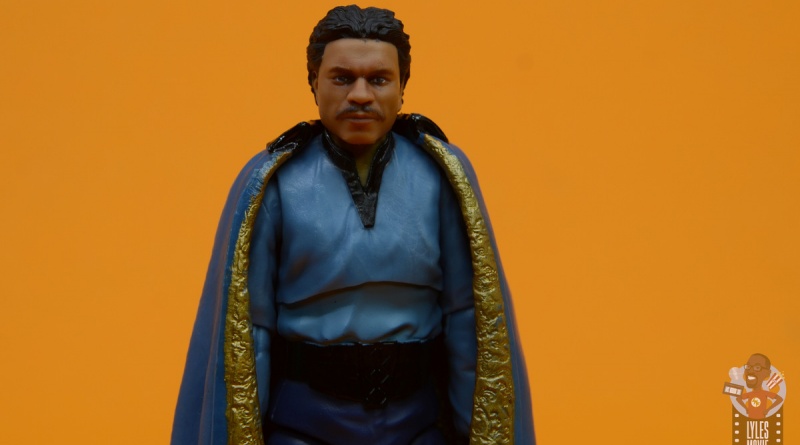 Lando Calrissian is one of my favorite characters in film. He’s far more nuanced than a normal, boring hero and has just the right amount of self-interest to be relatable. And it didn’t hurt that Billy Dee Williams made for the smoothest scoundrel ever. I’ve gotten back into the Star Wars Black Series lately and have been picking up a lot of figures I neglected earlier. Thankfully Hasbro rolled out another classic Kenner style packaging with a few upgrades to make this easier for me. Let’s see what we have here.

Packaging: Opening this figure was tough as it hit right in my sweet nostalgia spot. This is basically how Star Wars figures were when I collected them and there’s something really cool about seeing it replicated in figure form.

I might eventually go back and get a lot of these figures just to have MOC as this packaging is very well done. 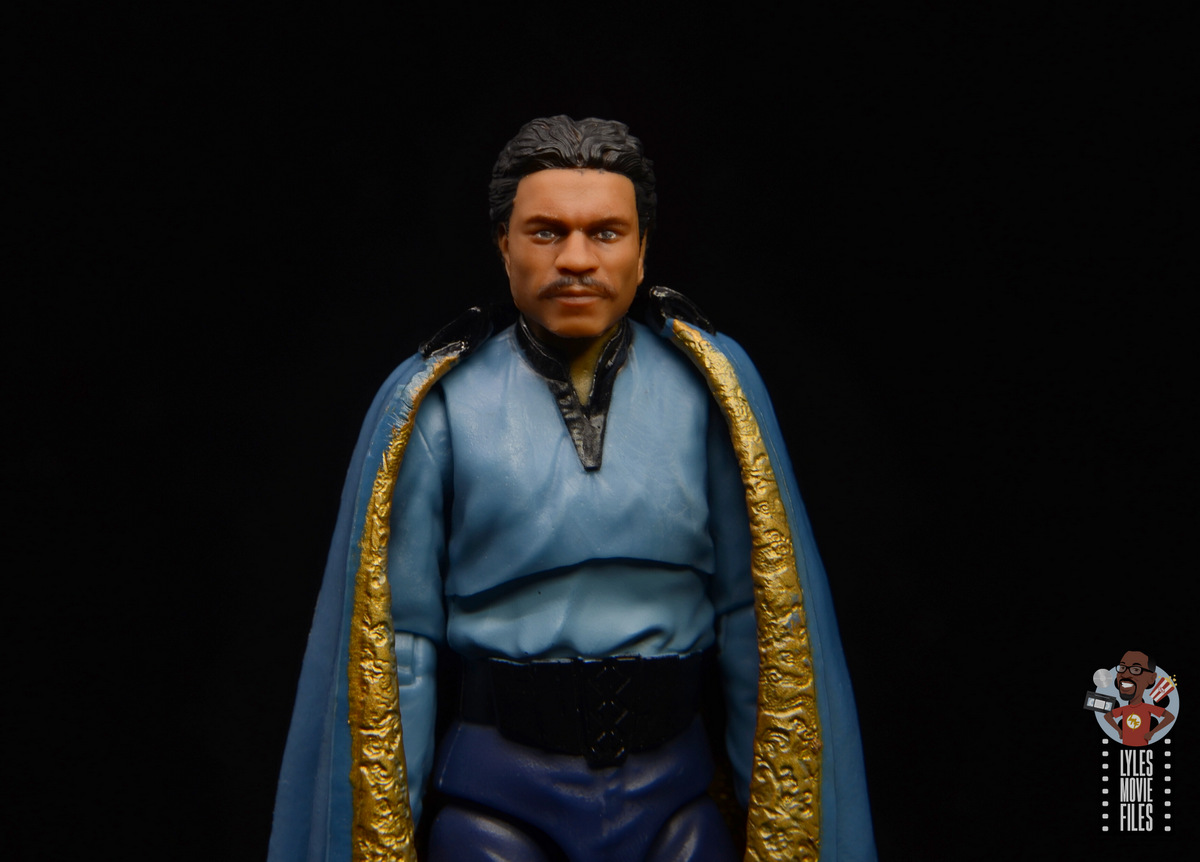 Likeness:  Hasbro previously released Lando in the old school packaging, but for the special 40th anniversary ESB setup, they gave him an enhanced face printing head sculpt. This is a good likeness to Billy Dee Williams with all the precise details like the flow of the hair, the cheekbones and mustache.

Lando’s outfit is likewise well done. His collar even pops out just like how it was in the movie. The shirt has just the right amount of looseness without looking too baggy. 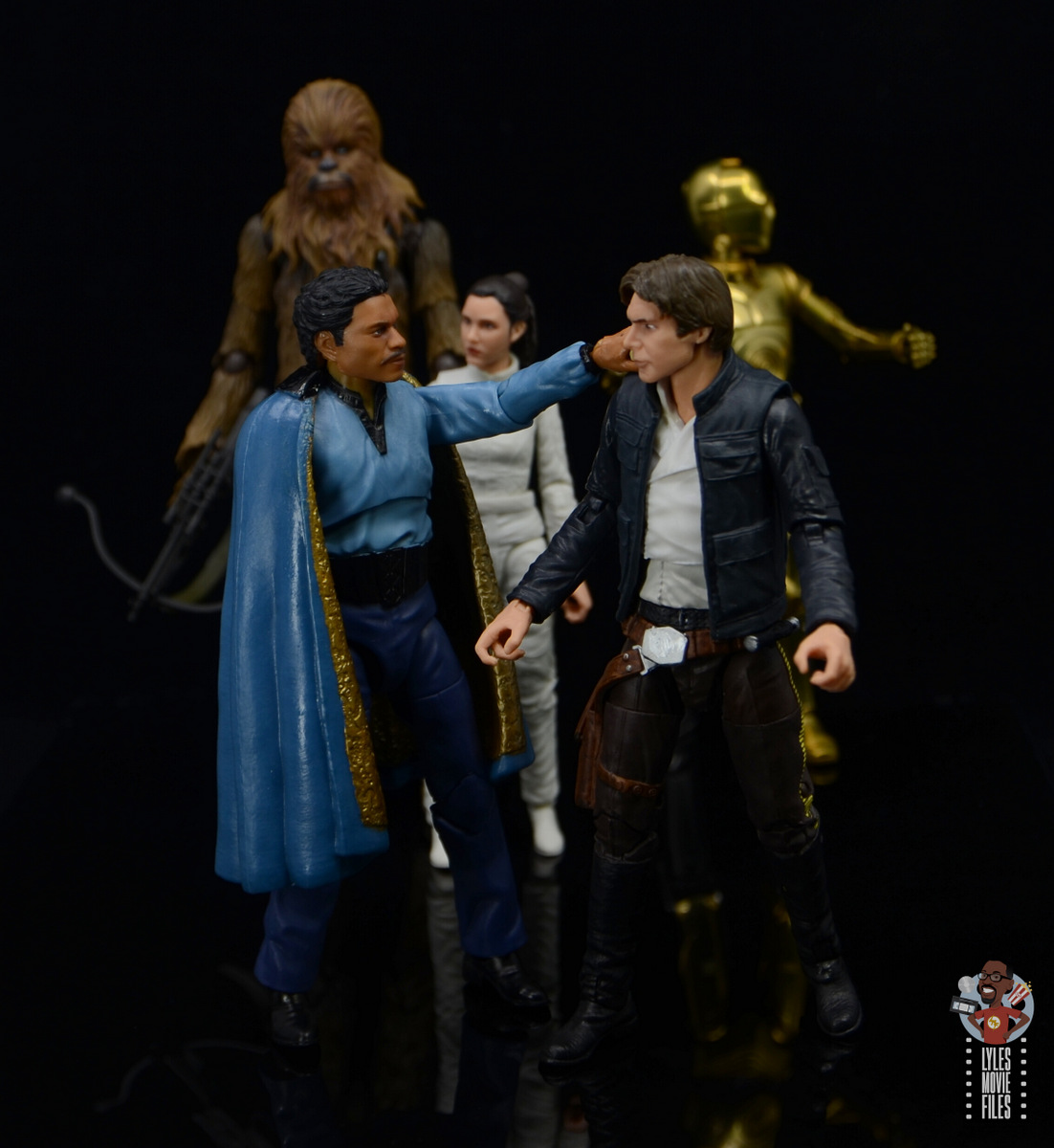 In the film you can’t really make out his belt that well, but Hasbro is has all if its layered panels just right. This came out really nice and meets my expectations for a stellar Star Wars Black figure.

I love the extra detail of his wrist communicator so he can alert Lobot that the deal has gone too bad to salvage. 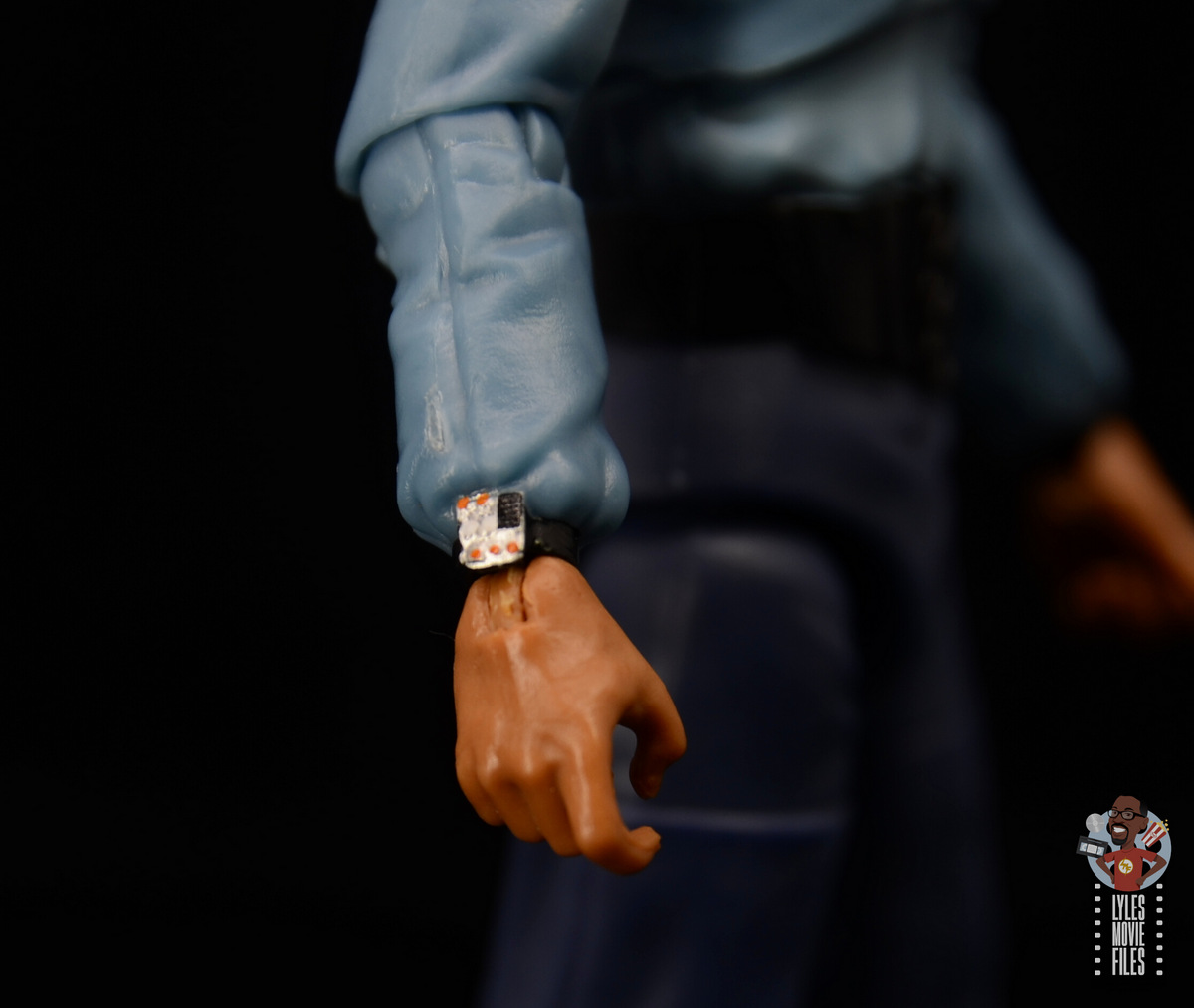 Paint:  Lando’s outfit is pretty simple. Given the layered panels of Lando’s belt I wasn’t shocked that some of the blue spilled over to the top of the areas that should be black. 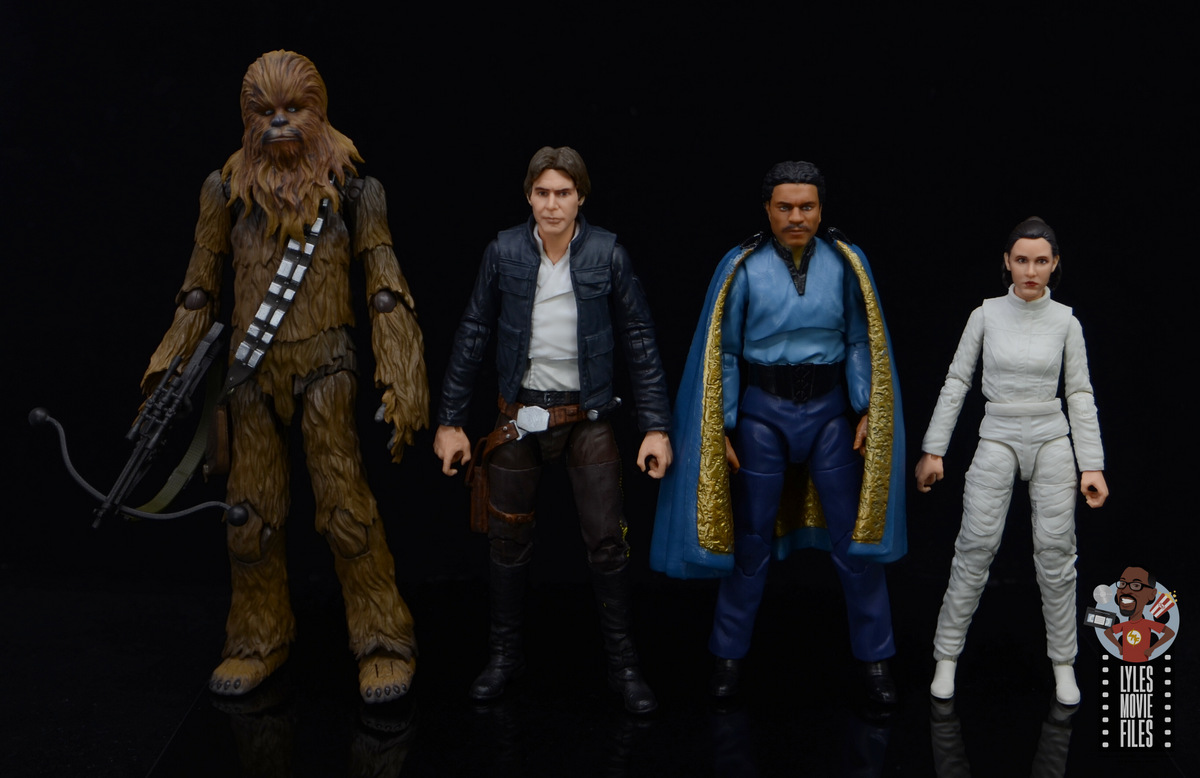 Scale:  Lando is just slightly shorter than Han Solo and naturally is taller than Luke and Leia. The figure impressively captures the scale properly. 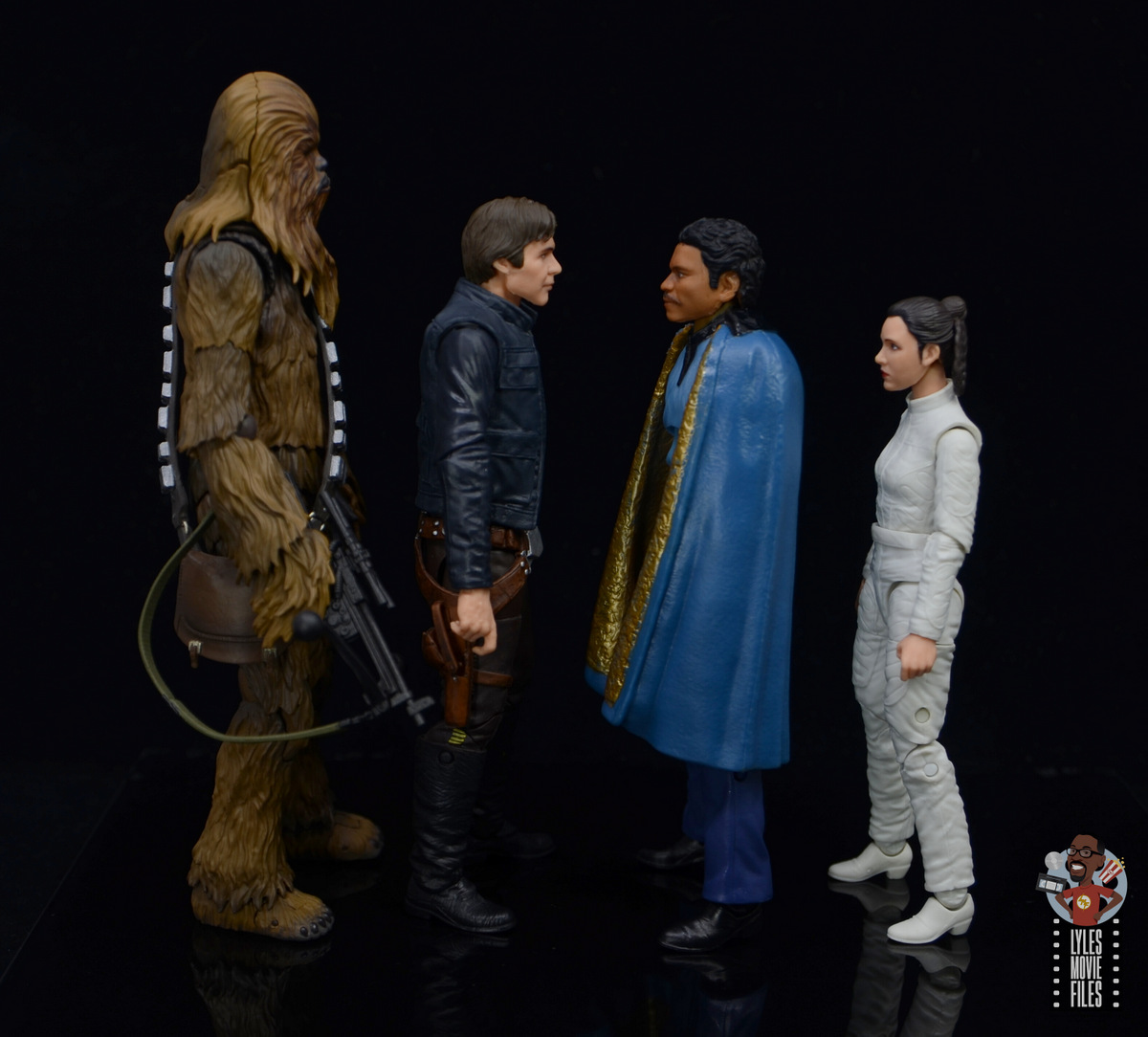 Articulation:  Count Dooku and the Snowspeeder Luke Skywalker set the articulation bar high for me with this line. That’s the latest articulation model so my expectations for older figures like Lando have had to be lowered. Naturally I’d be happier if all of the figures had the newer articulation but Lando’s articulation is fine for what’s needed with this look. 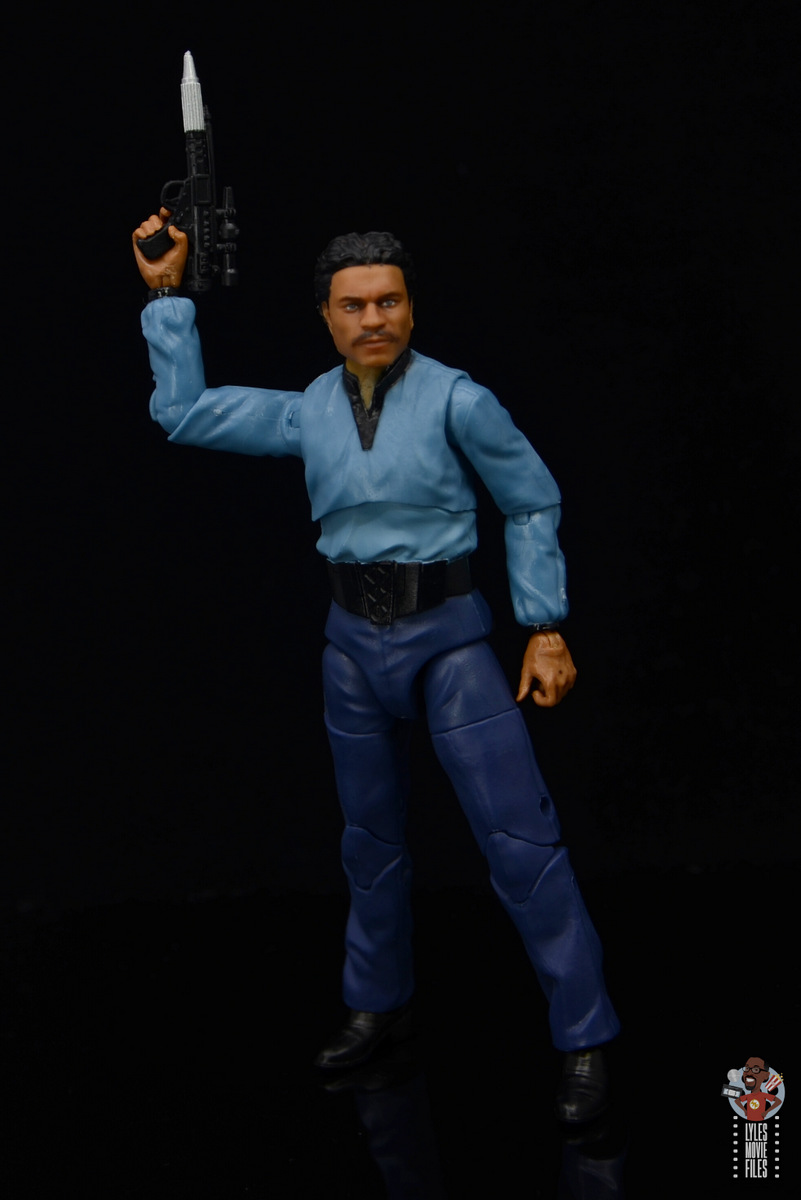 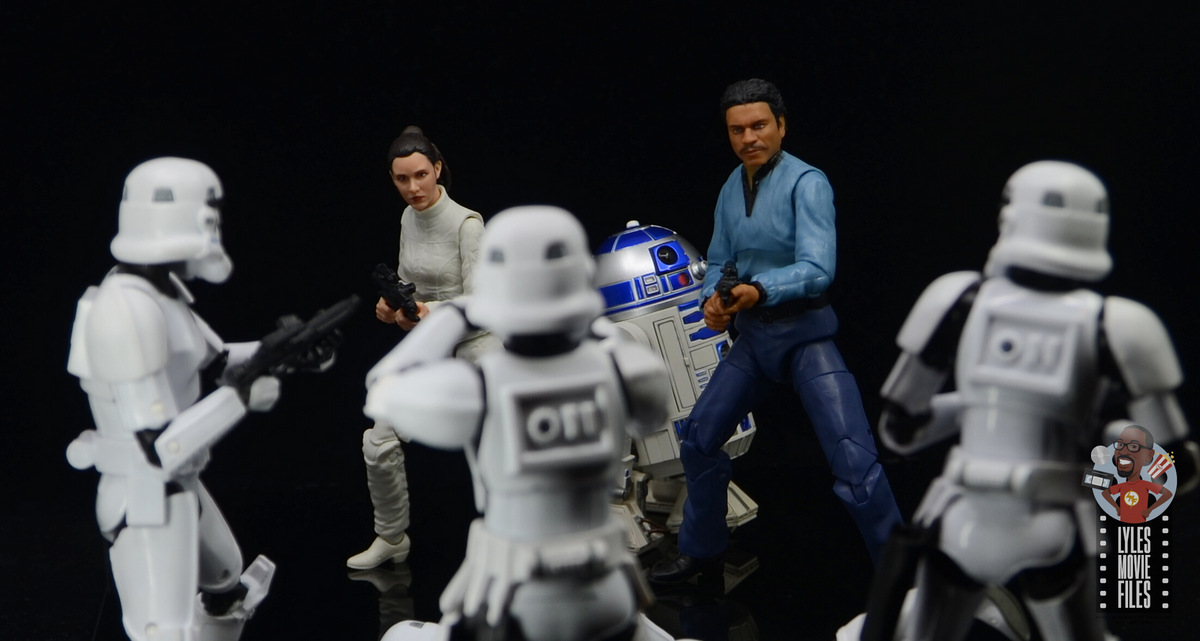 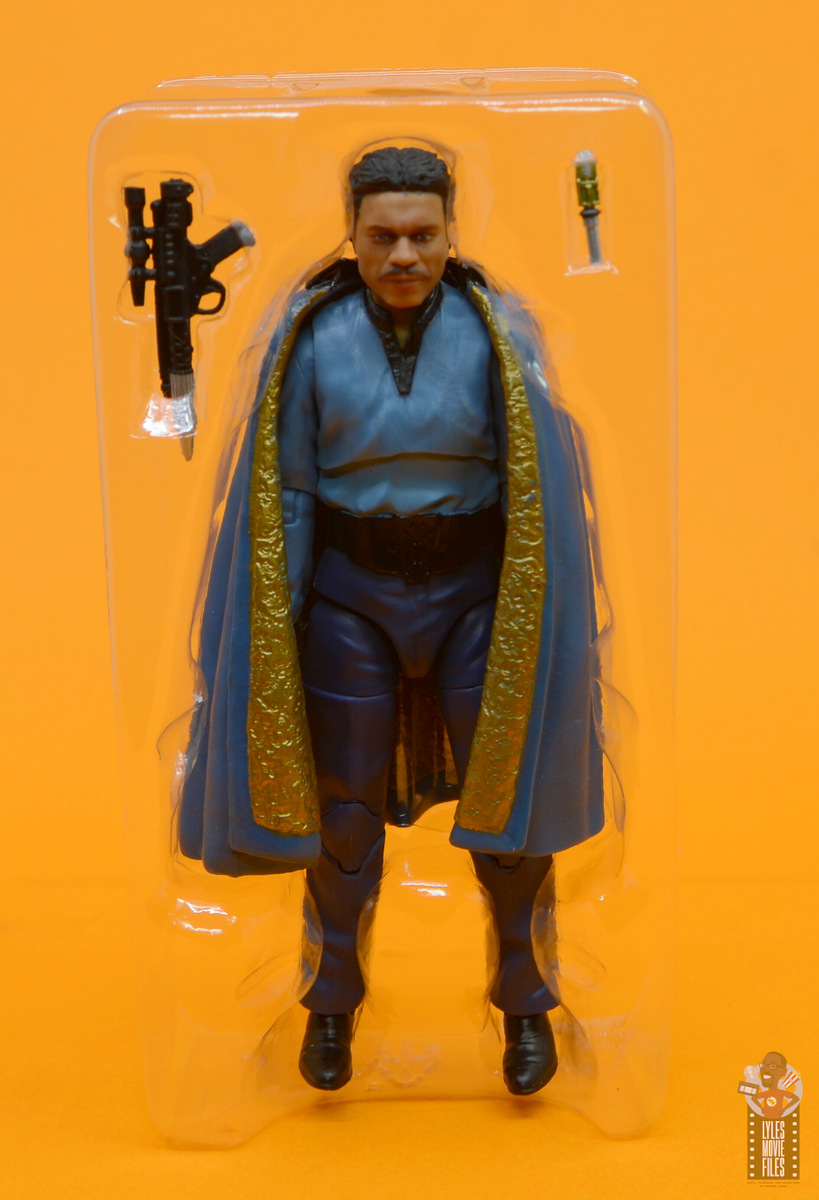 It doesn’t flow as naturally as a cloth version could and definitely has that plastic shell visual. The only way for it to look authentic would be to go cloth, which is something Hasbro is averse to doing for the most part.

I always thought the interior of the cape was more orange than gold — why is there so much color controversy with Empire Strikes Back outfits??? — but apparently it’s gold. The intricate pattern is the likely reason why we got a plastic version of the cape. 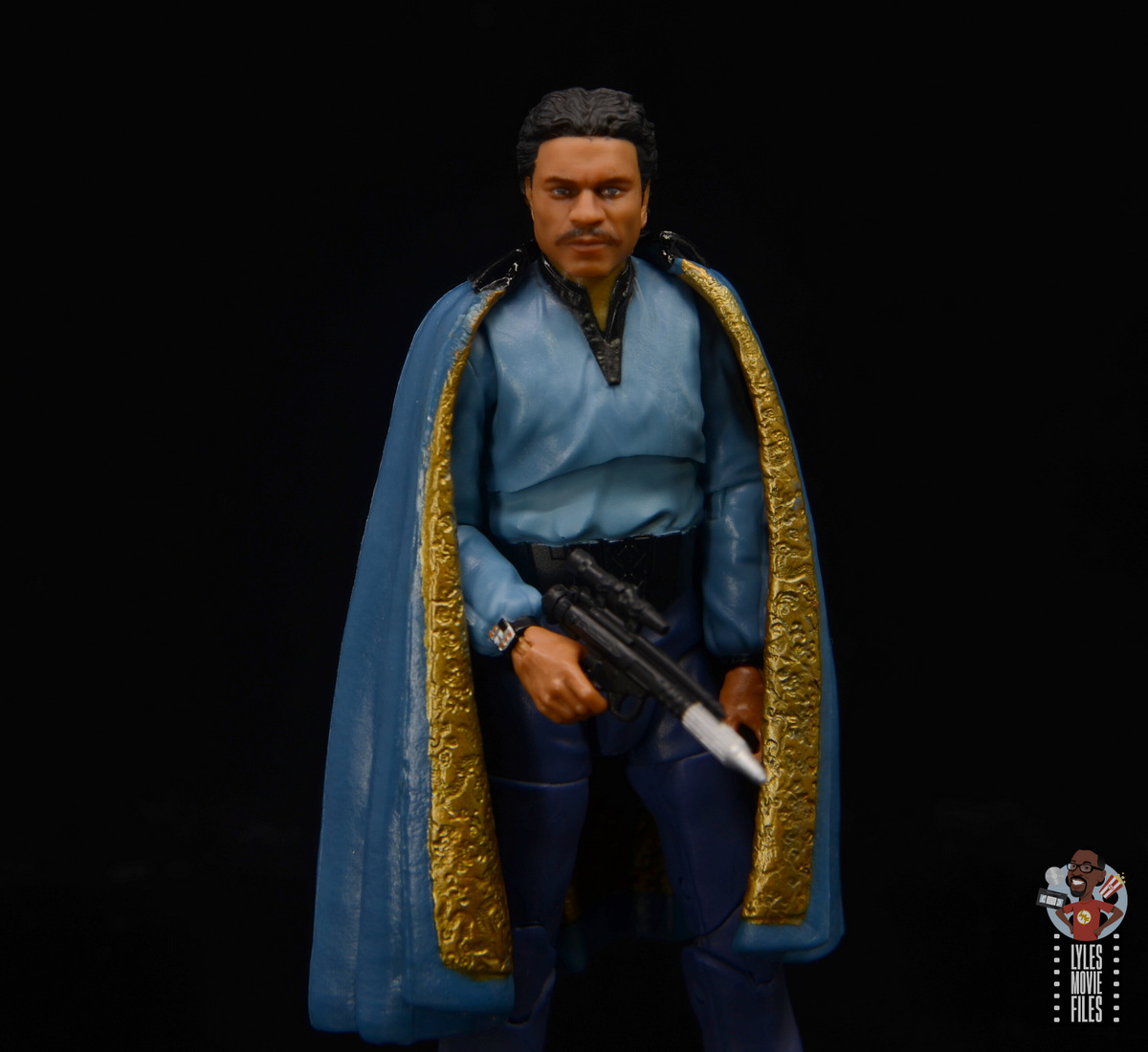 He also comes with his blaster. I say his blaster very loosely, because the only time he’s carrying a weapon in ESB is when he takes a Stormtrooper’s gun to help Leia and Chewie escape Cloud City. 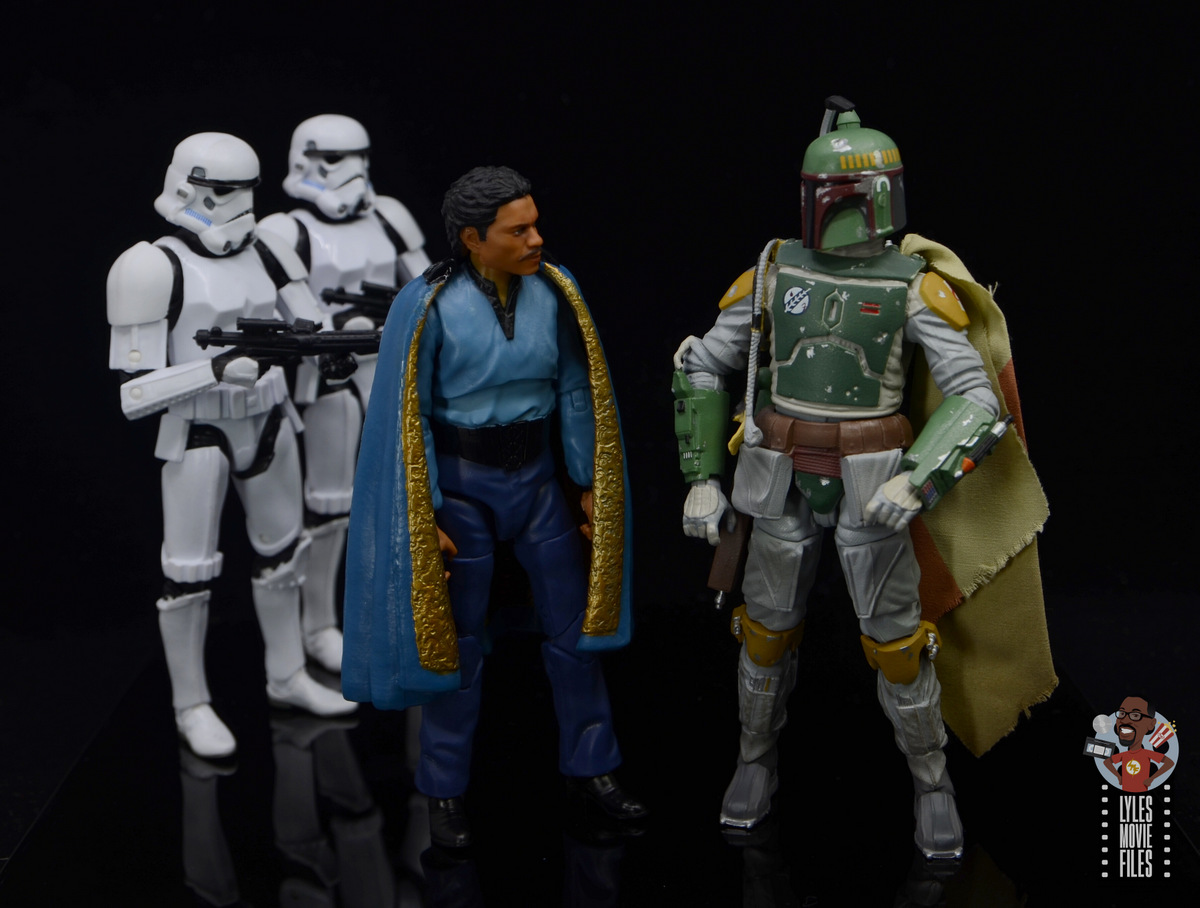 Billy Dee Williams did carry this blaster in promotional pictures so it’s kind of become his default weapon all the same. Since I could look at the reference pics, it’s pretty close to the model and I can’t see anything off.

Lando finally comes with the communication device he uses to signal the evacuation of Cloud City. Even at this scale it’s a pretty exact replica. That’s impressive. 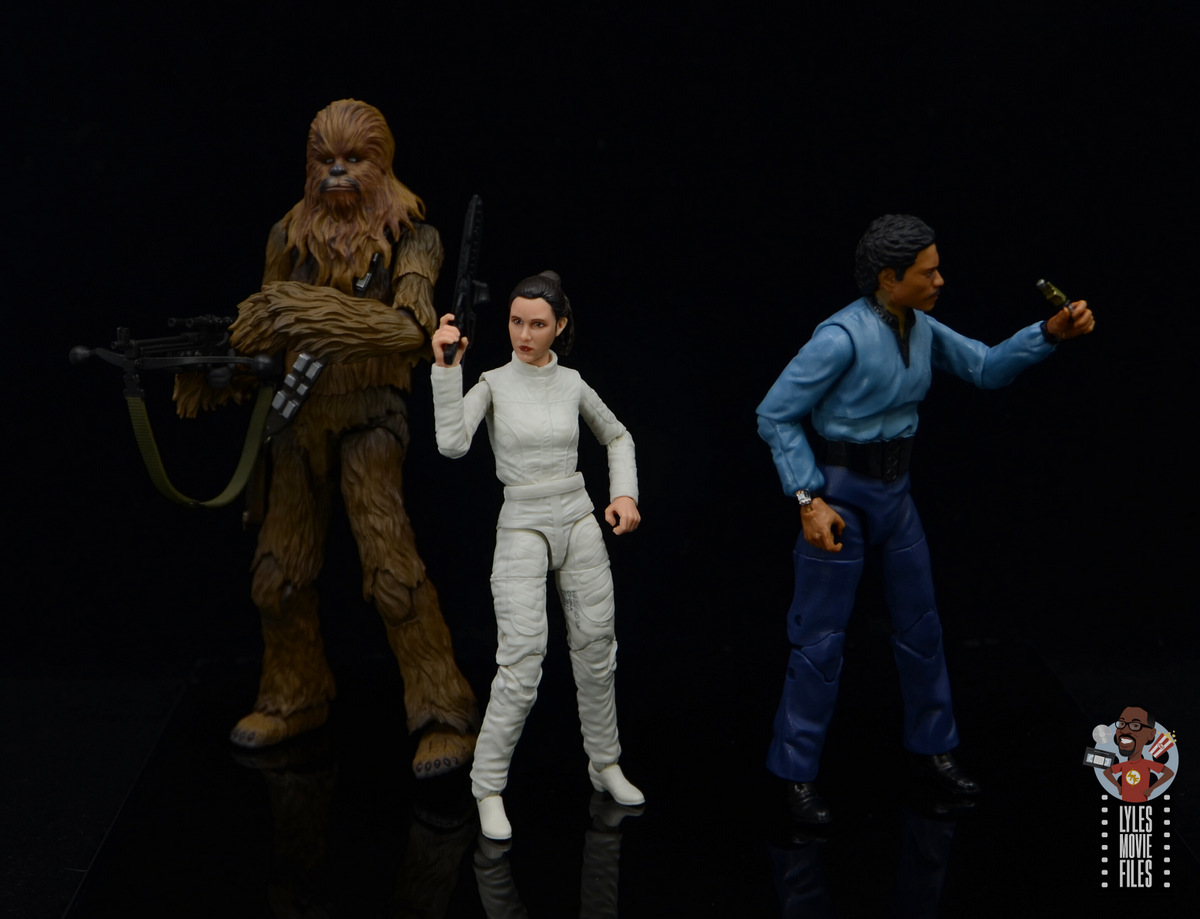 Worth it?  I got Lando for $18. That feels like a fair price for the line given the lack of bonuses like a Build-A-Figure piece.

With the updated articulation, Lando would be a 10 yet he’s still an excellent figure with a great likeness and all of the necessary useful accessories besides maybe a Stormtrooper blaster. 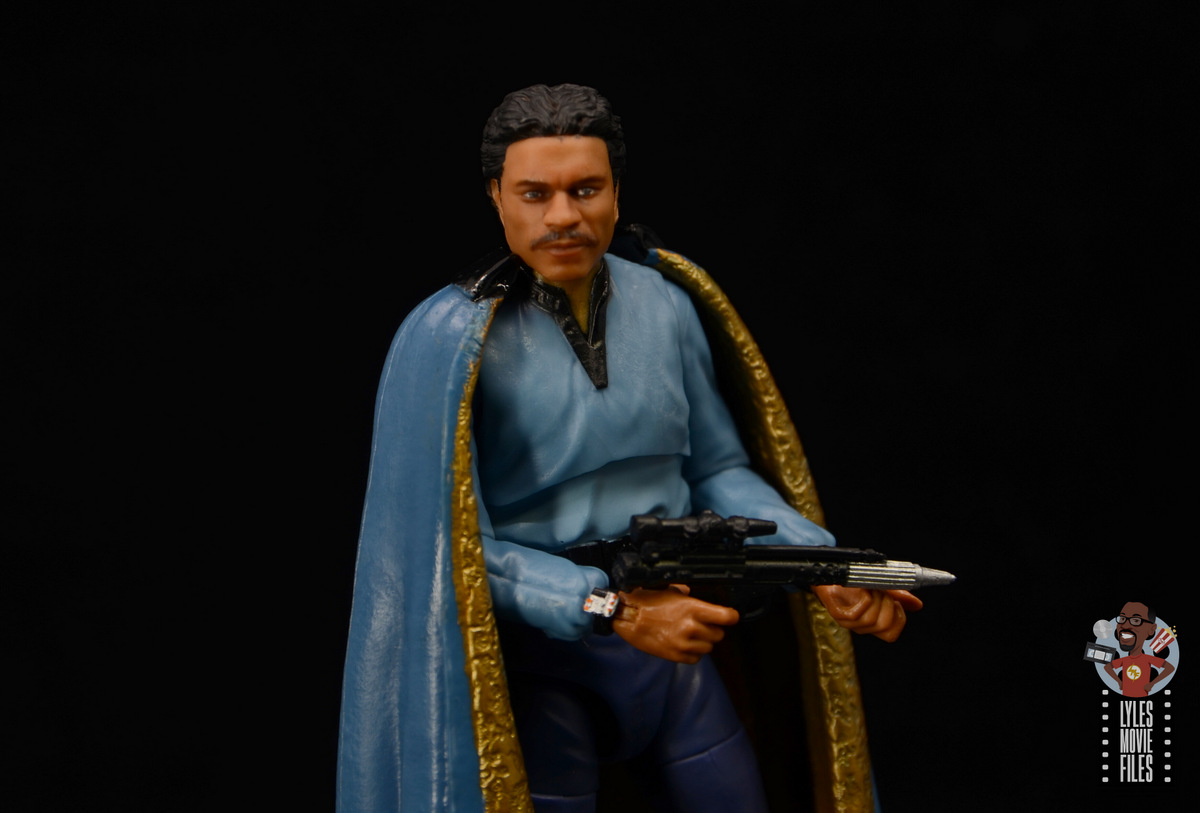 Where to get it?  Amazon currently has him in stock and Entertainment Earth has him up for pre-order.