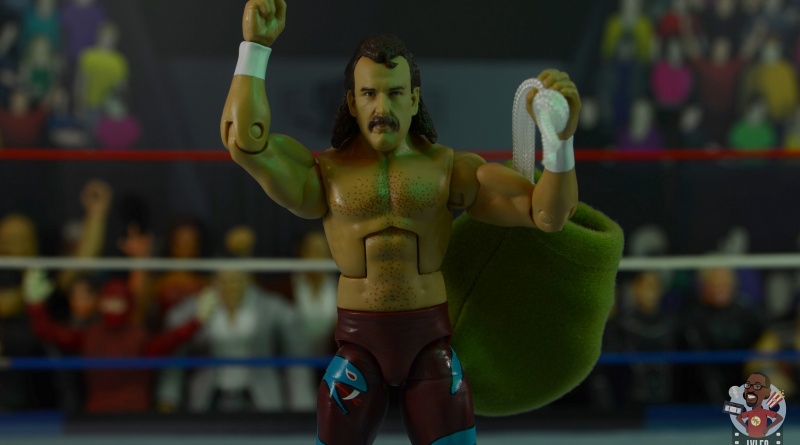 Jake ‘The Snake’ Roberts was an unusual heel in the WWF. He didn’t need a manager and talked slowly to get his point across. Eventually he started getting too popular to remain a heel and became one of the icons of the 80s WWF scene. Mattel has made several WWE Elite figures of Jake, but he’s one of those characters that can never get enough. His latest comes in Legends Series 8. Let’s see what’s in the bag or it needs to slither away.

Packaging:  I love the gold, brown and yellow color scheme of the Legends line. The big WWE Legends logo on the insert looks fantastic and helps show off the figure nicely. Robert Rudman seems to take actual pride in writing the bio and it shows with his comprehensive take on the character. 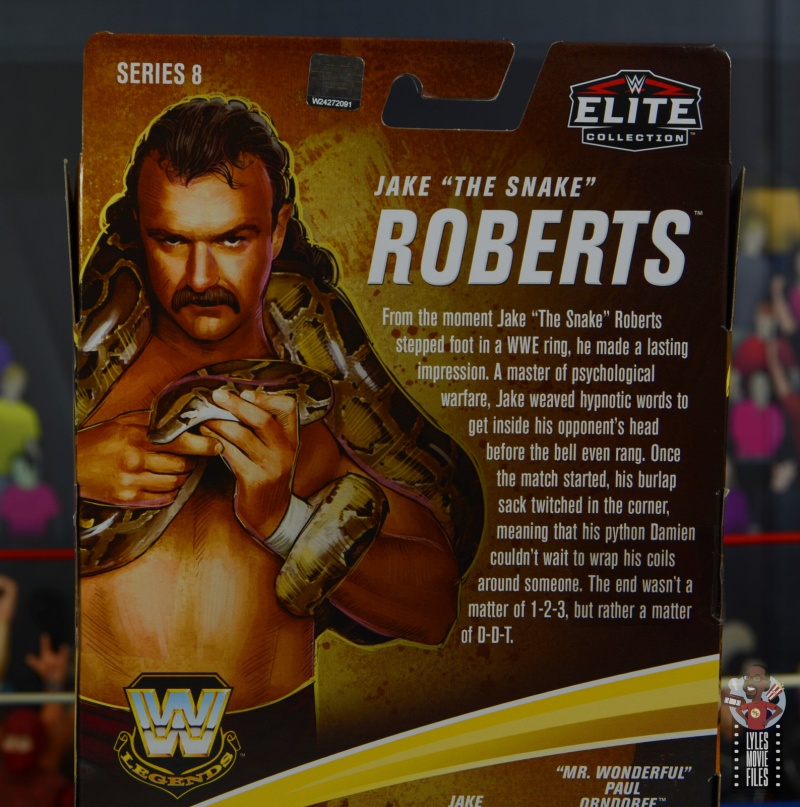 There’s a little poetry to this one making this writeup even cooler. That would be the dream side job for an 80s kid like me. The package artwork is also terrific. I feel far less likely to trash these packages despite a lack of space, but they look so cool.

I also dig the presentation of Jake in the package with Damian on his shoulders replicating the classic visual we’d see of them so often.

Likeness: The earlier Legends Jake figures had a pretty decent likeness for the time, but this is a case where it’s easy to appreciate the impact of the True FX technological advancements. 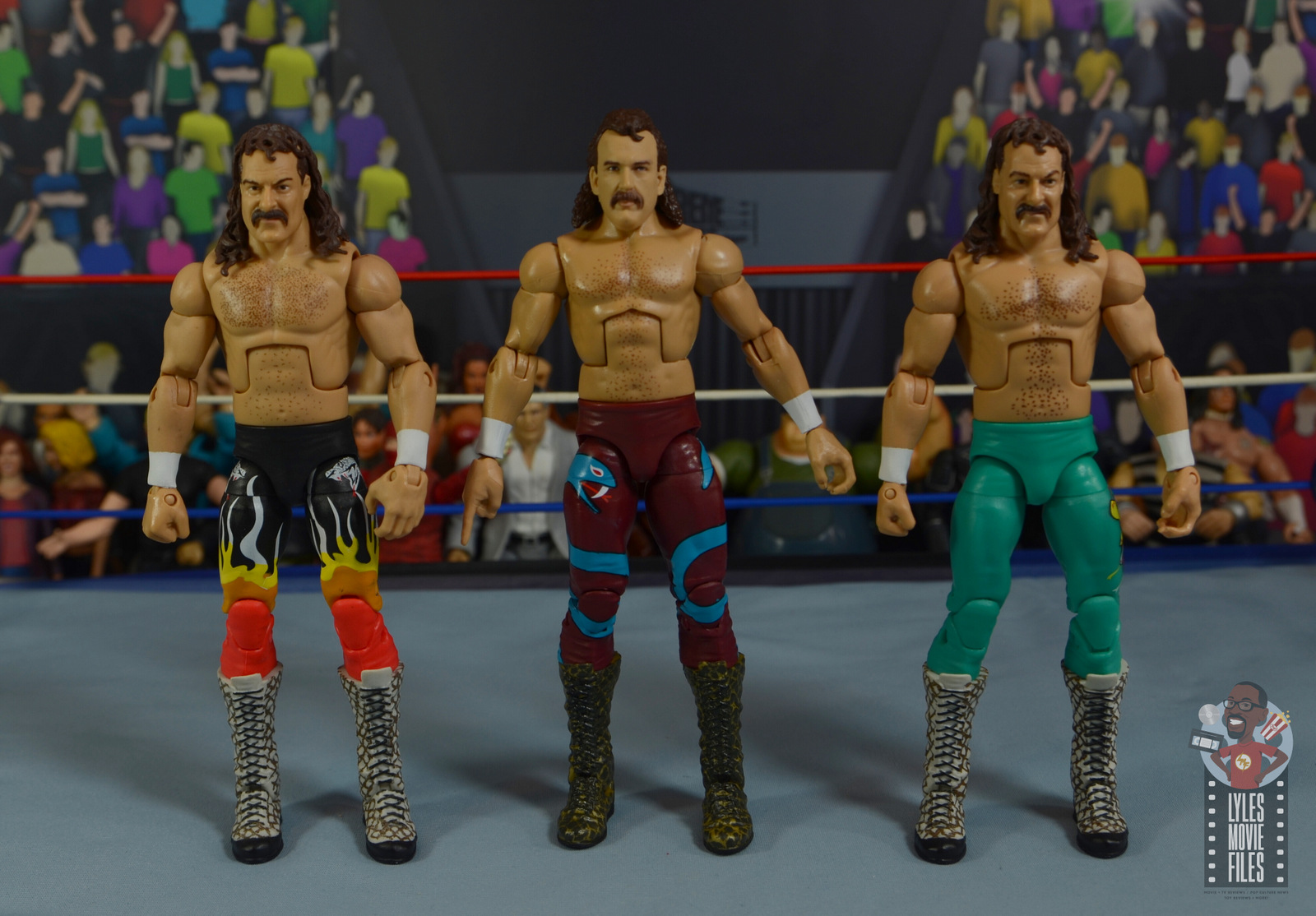 This headsculpt looks dead on like a mid-80s Jake the Snake. The eyes are beadier and give a more calculating expression. Jake’s hair isn’t as intricate as earlier figures although this thicker looks fine for the timeframe.

Mattel has used a slimmer torso than I think really fits well for Jake. The next larger size is one that works for bigger guys like Davey Boy Smith so that doesn’t work any better. I wish Mattel introduced that thicker non-defined torso earlier in the line to better represent 80s and 90s stars that didn’t look like Lex Luger or Sting.

Scale:  Jake was one of the taller wrestlers in his prime standing at 6’5, taller than the 6’1” Honky Tonk Man and 6’3” Rick Rude. The figure seems about right, but Mattel probably needs to size up its next Hulk Hogan as he should be taller than the standard look for figures at this point.

Paint:  The standard figure features Jake in his deep magenta tights with a turquoise snake wrapped around his legs. I love this color choice as it’s unique combination and will further help Jake stand out on my display.

I didn’t notice any issues with the pain, which is impressive given the thin black line separating the snake and the tights. He’s got a darker snakeskin boot than earlier figures, which is also a nice plus. 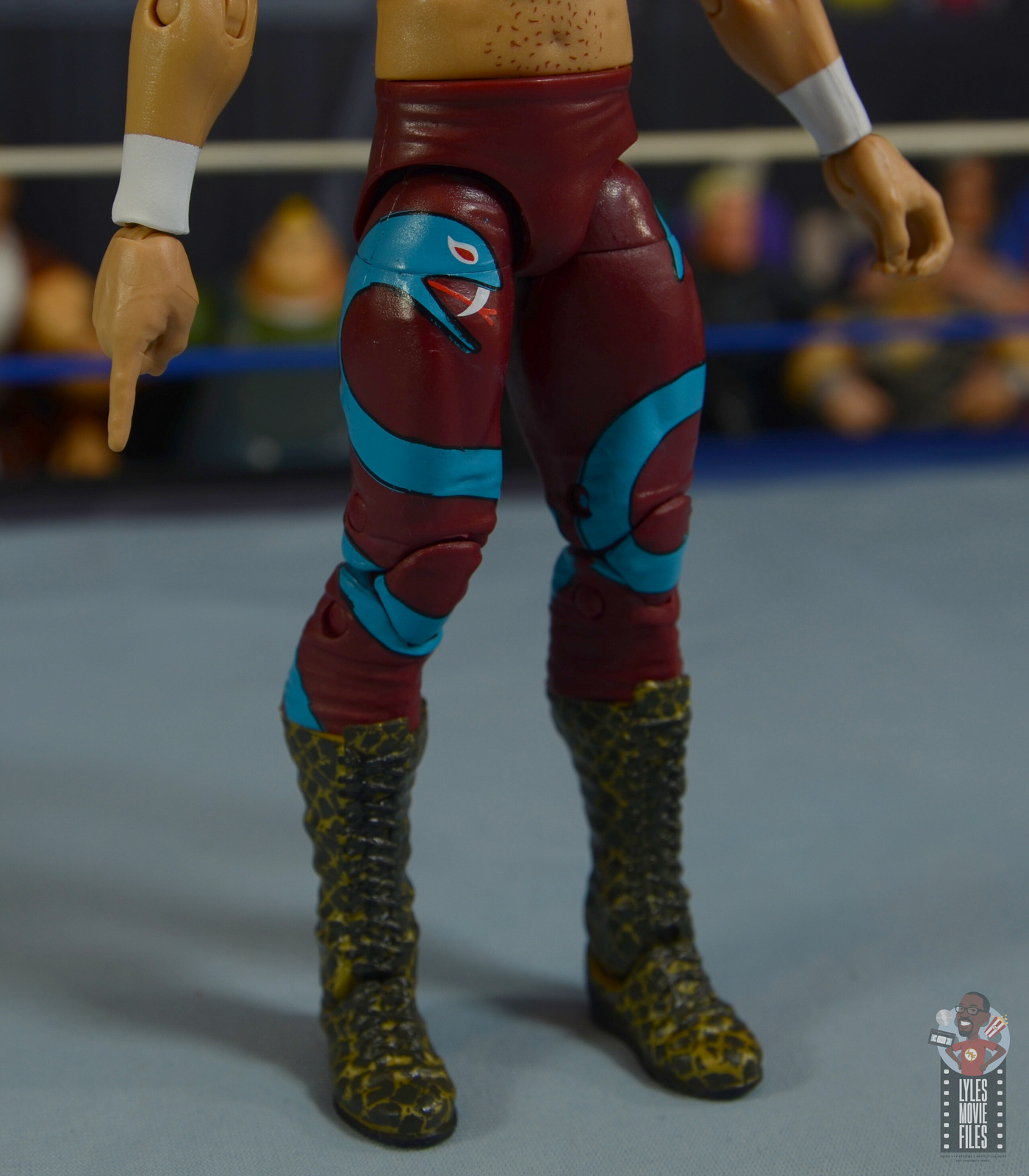 My figure is missing a little paint along the sides of the mustache however. Paint flaws were rarely an issue with Mattel figures, but it’s become more of a problem over this year. I wonder if this has more to do with the output or the pandemic.

Jake gets the chase figure in this wave with a green pants and red snake paint job. It’s a variant I won’t go out of my way to track down, but I appreciate how the Legends are getting chase variants since they tended to mix up their looks more often than the modern stars. 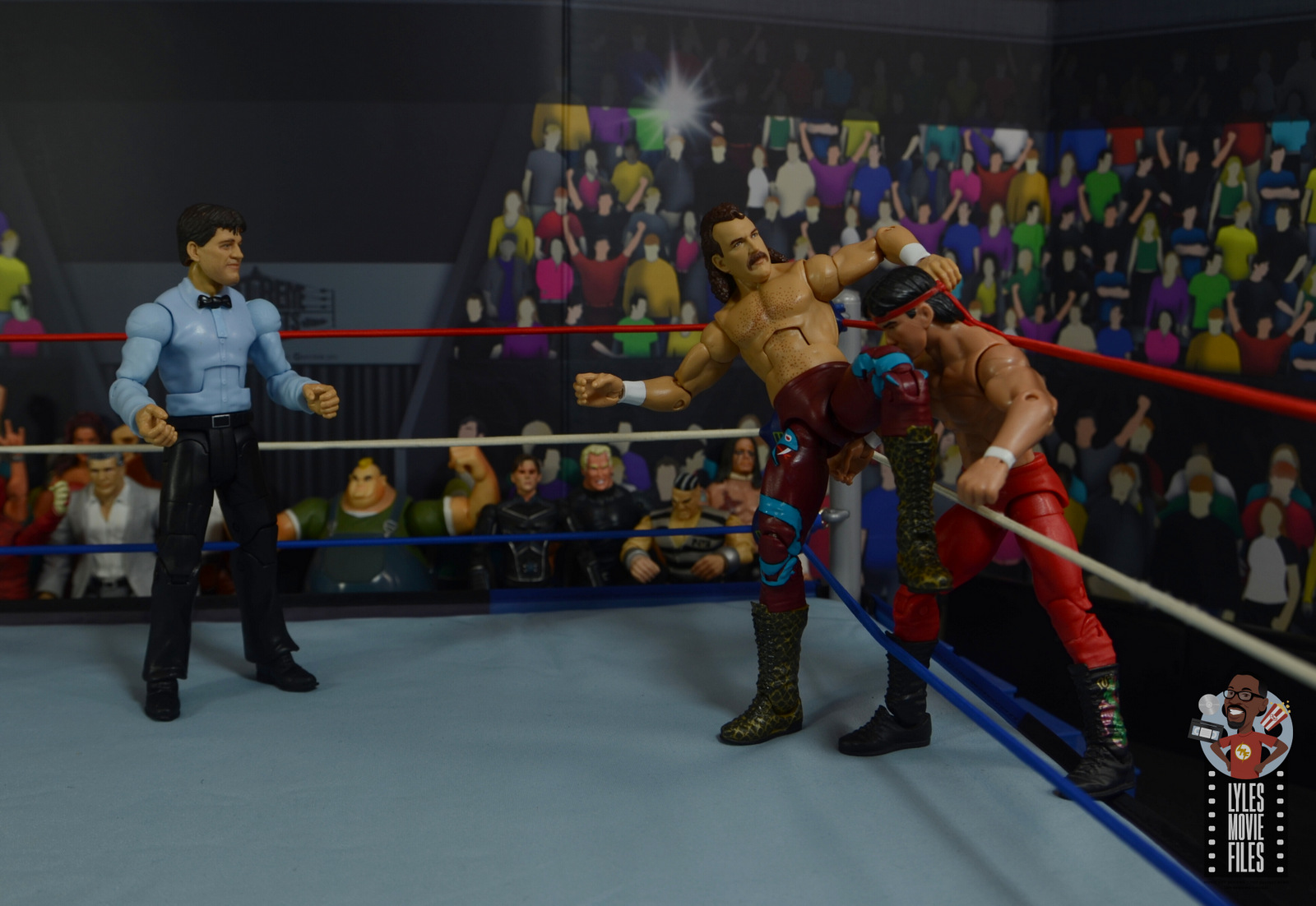 Articulation:  Jake wasn’t this big submission wrestler, with his highest impact moves being a deadly short clothesline and a high knee. 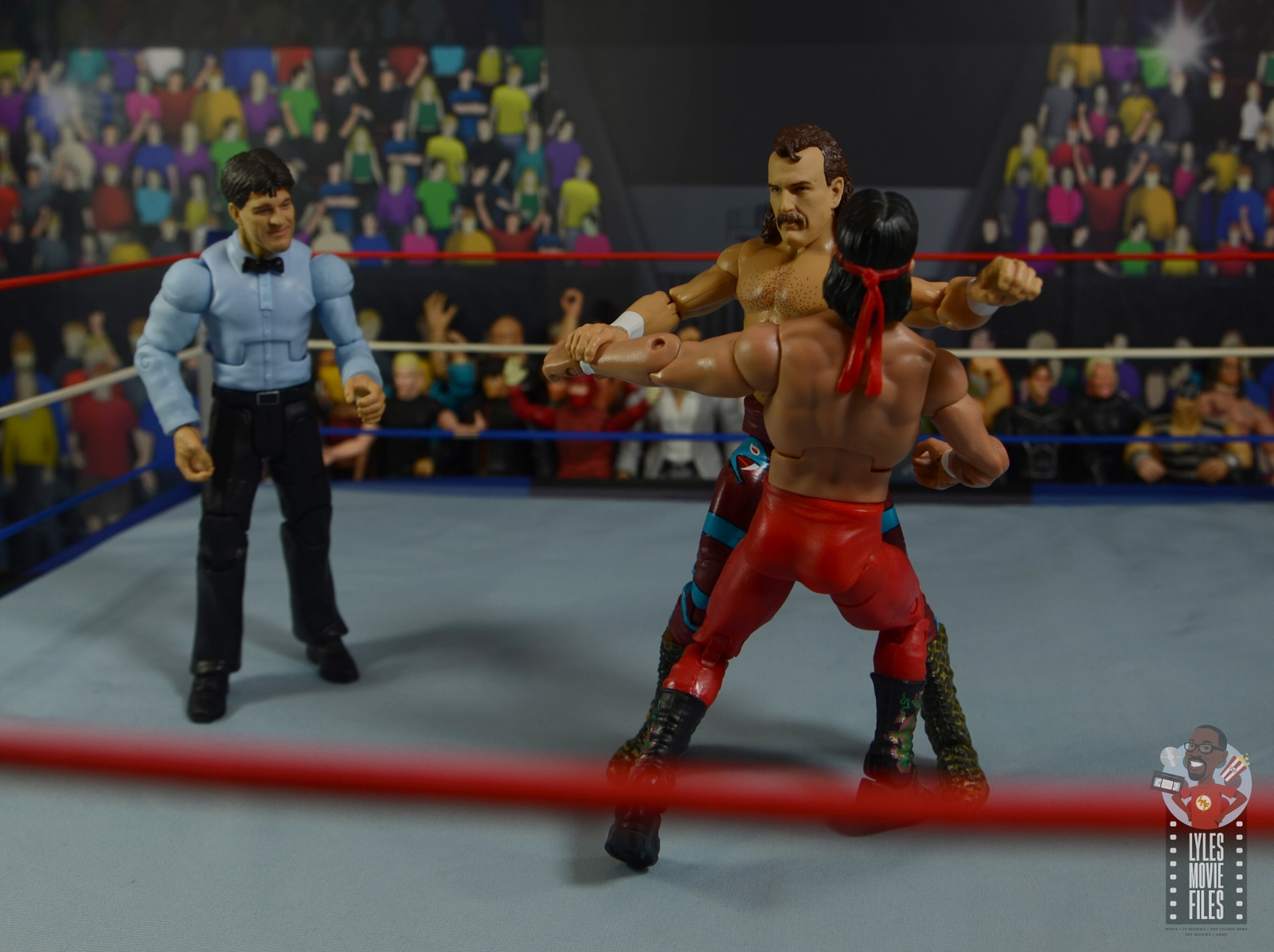 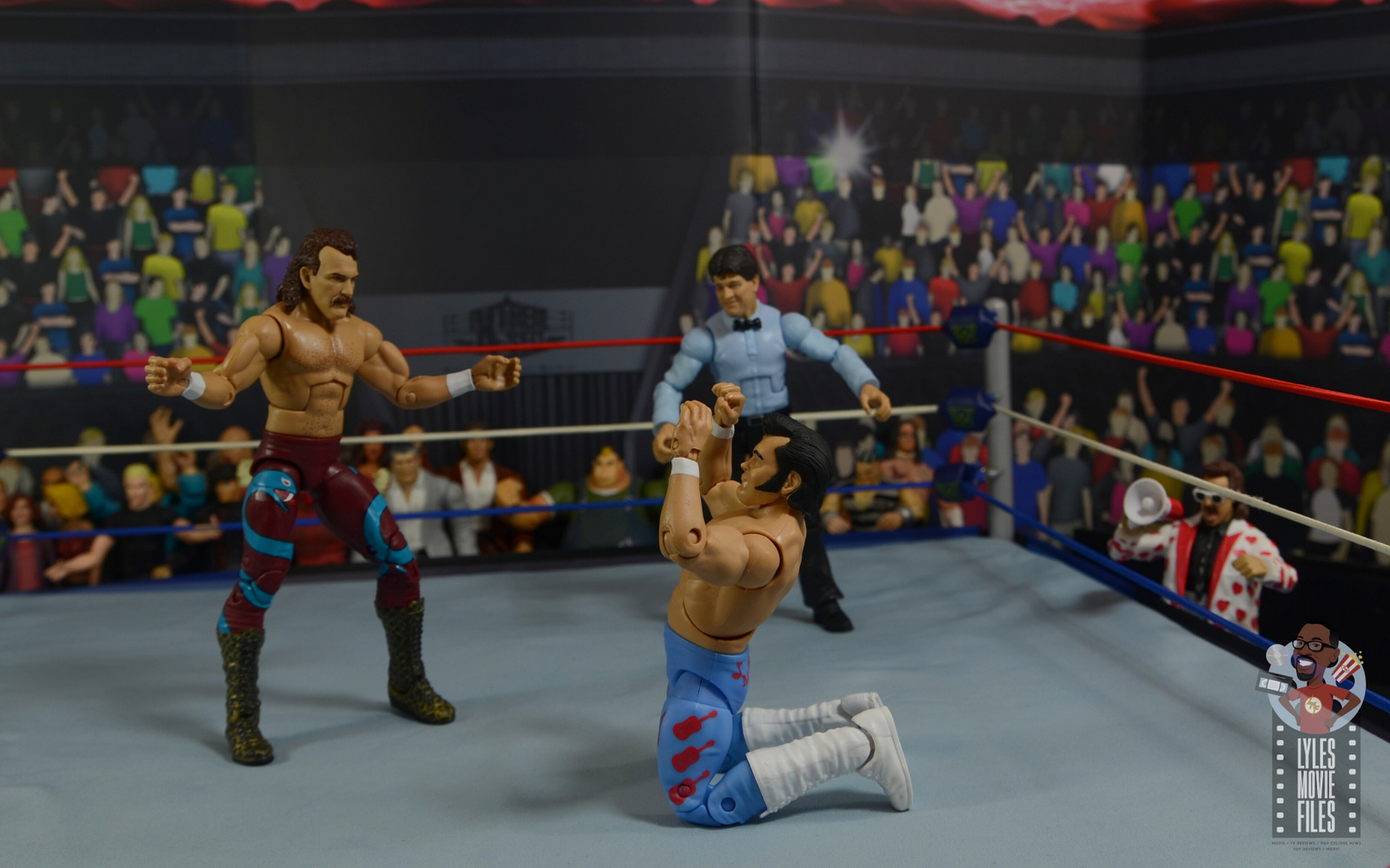 Of course his deadliest move is the DDT and you won’t have any problem pulling any of his signature moves off. That said, I am really not loving the restriction of the single joint elbow at this point. 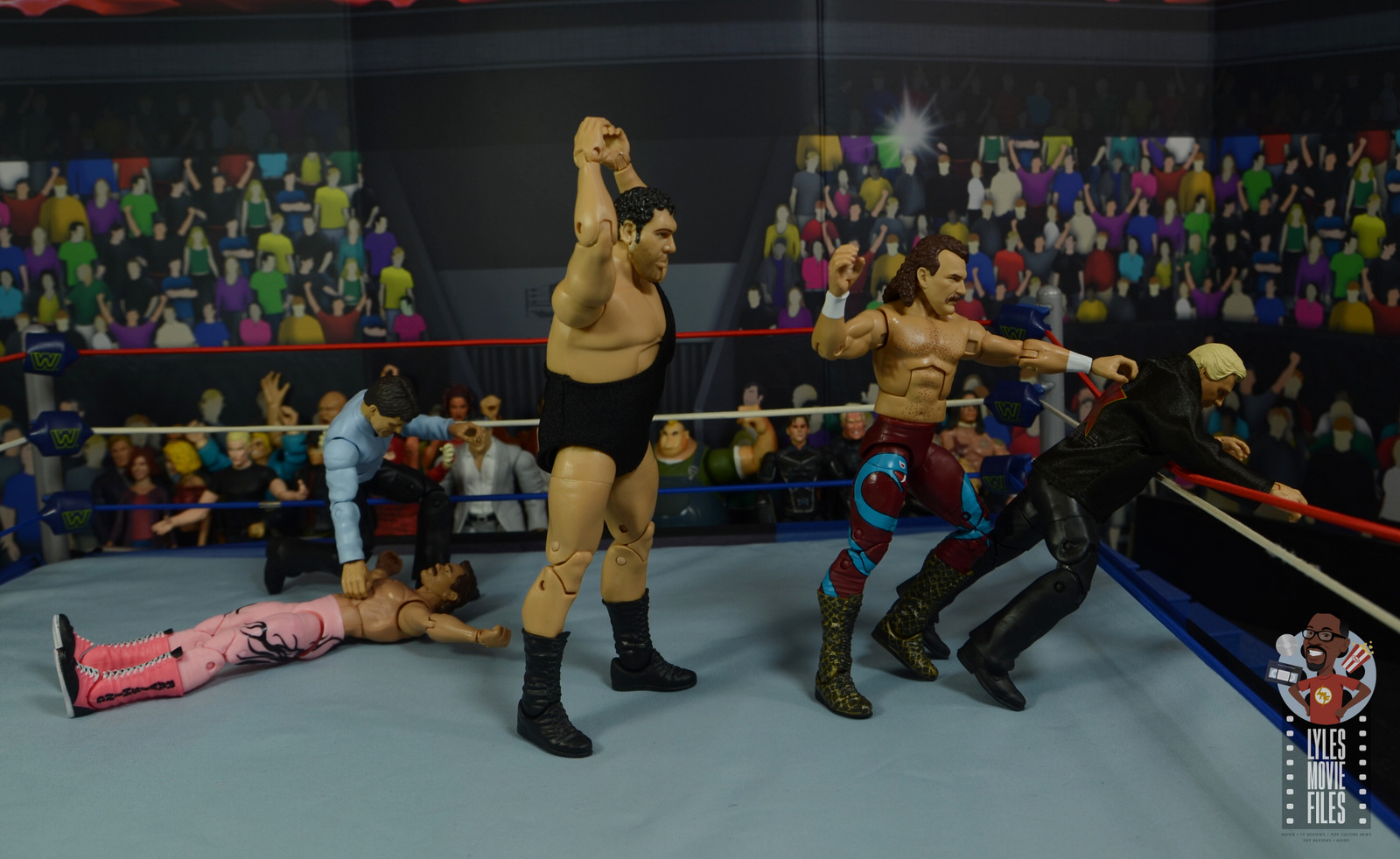 Jake ‘The Snake’ has: 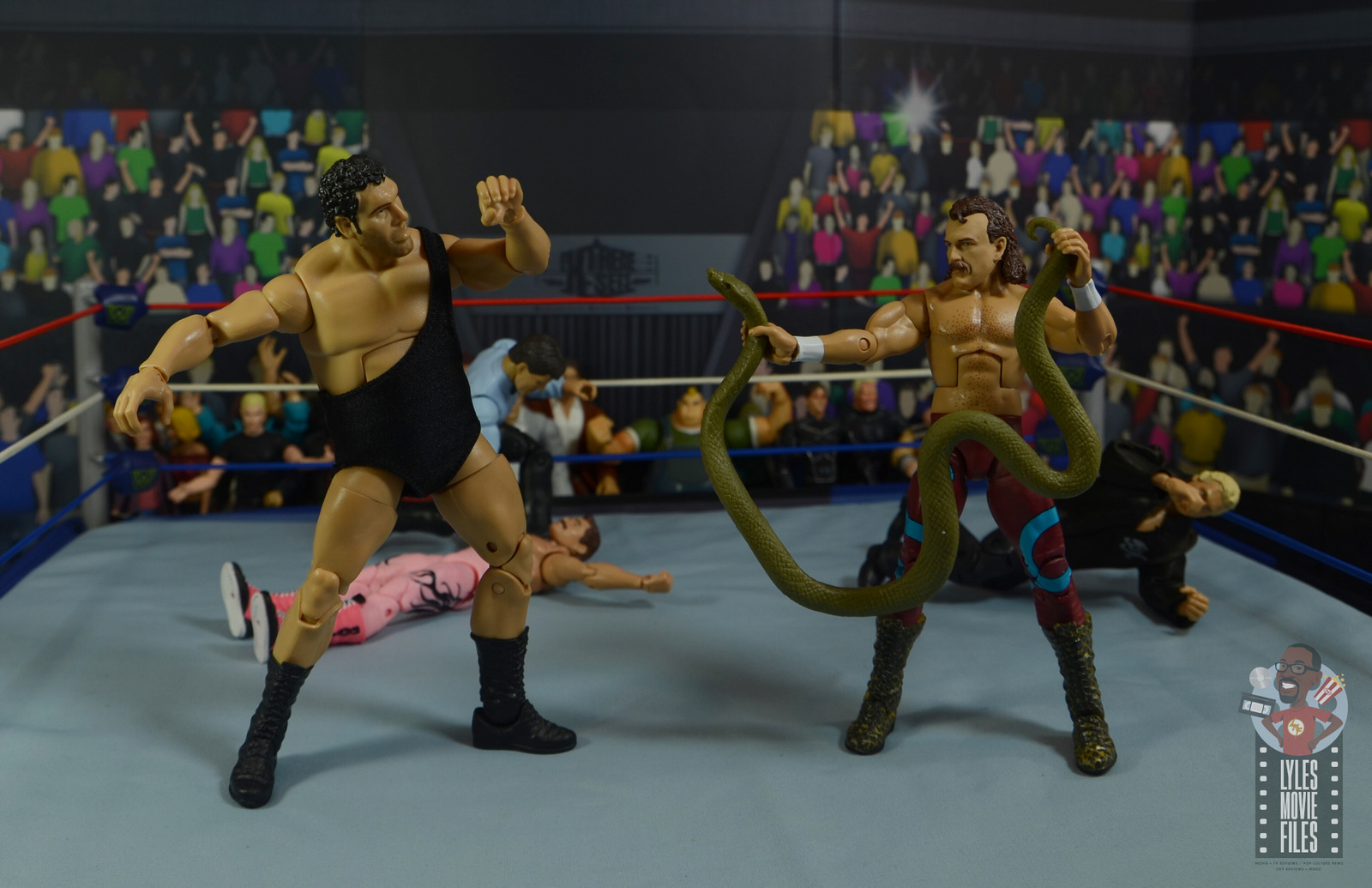 Accessories:  It’d make absolutely no sense for Jake not to come with his snake so we get a nice large Damian accessory and burlap sack to put him. 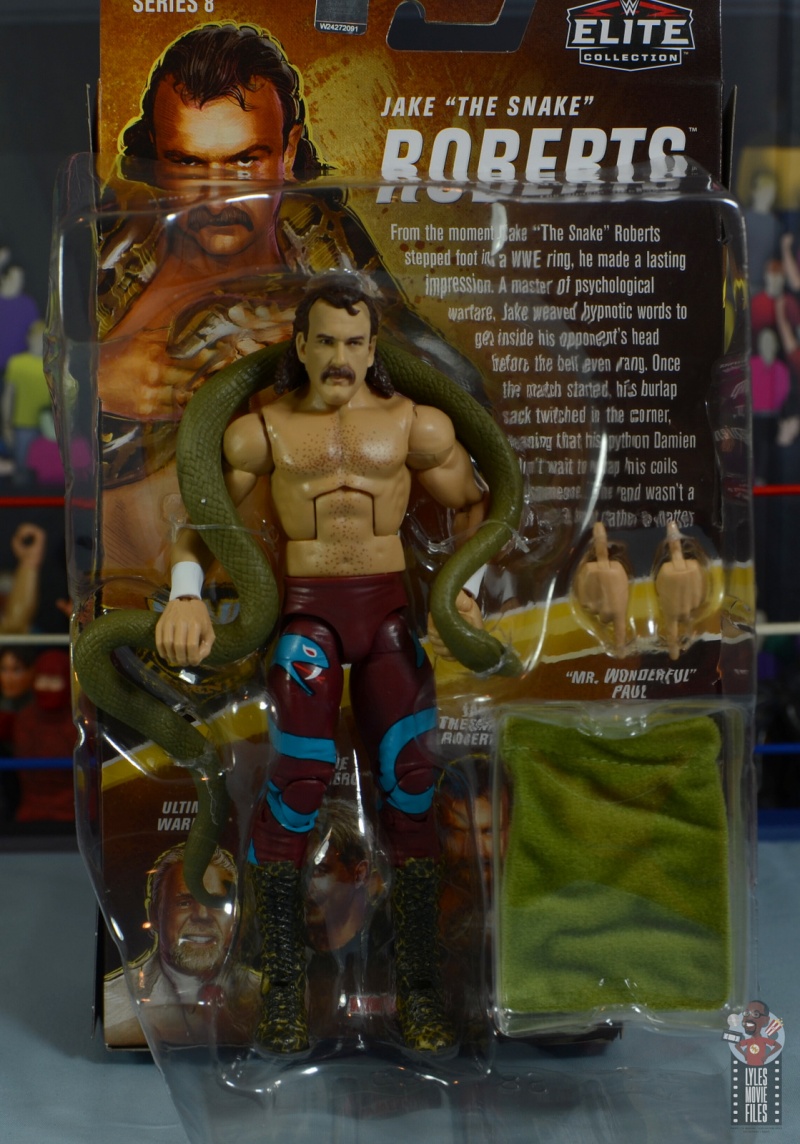 The balance with this has always been a little tricky and here’s another example of where double jointed elbows would come in handy. 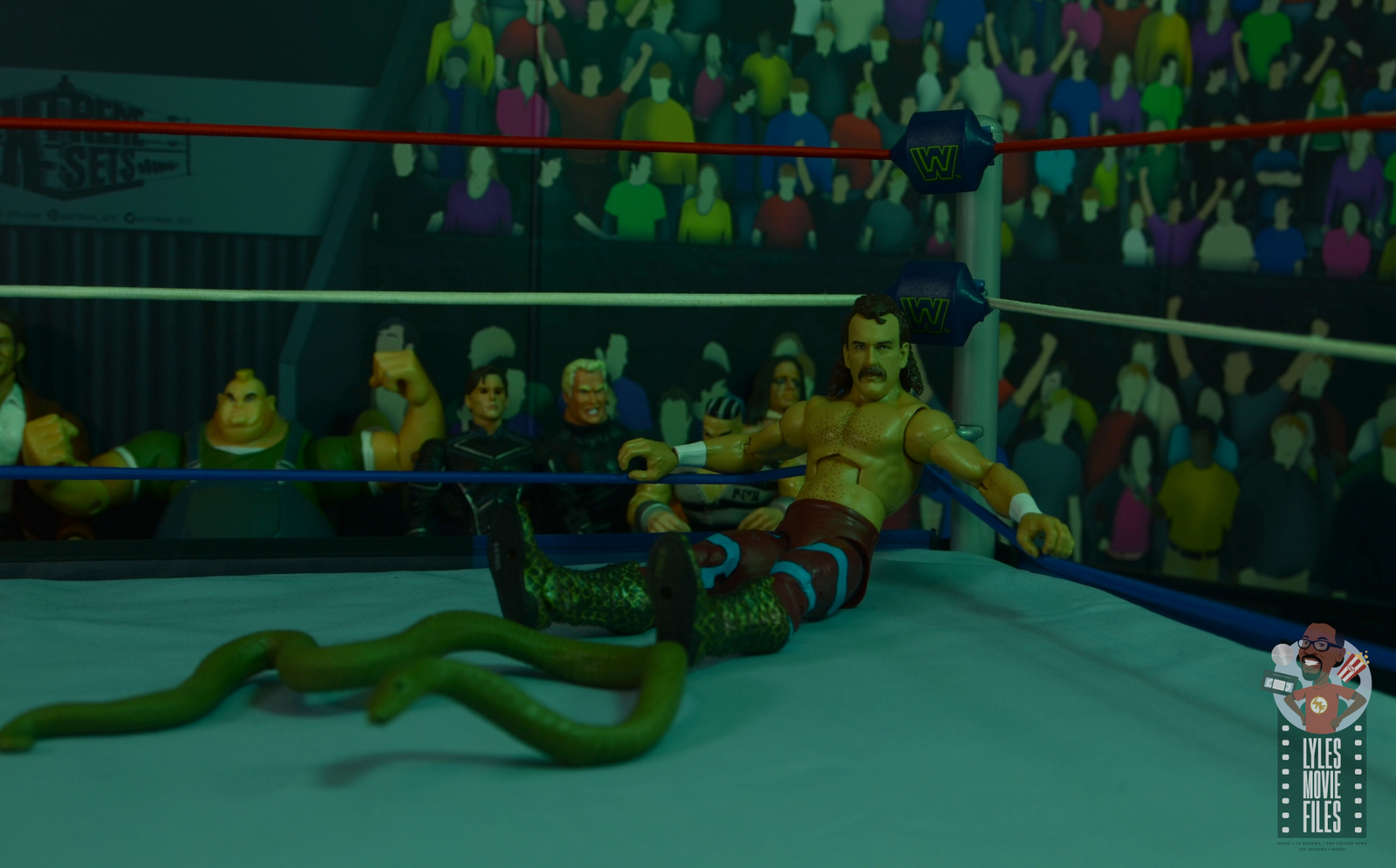 Additionally, he has two pointing hands, which you can use to signal Jake going for the DDT. 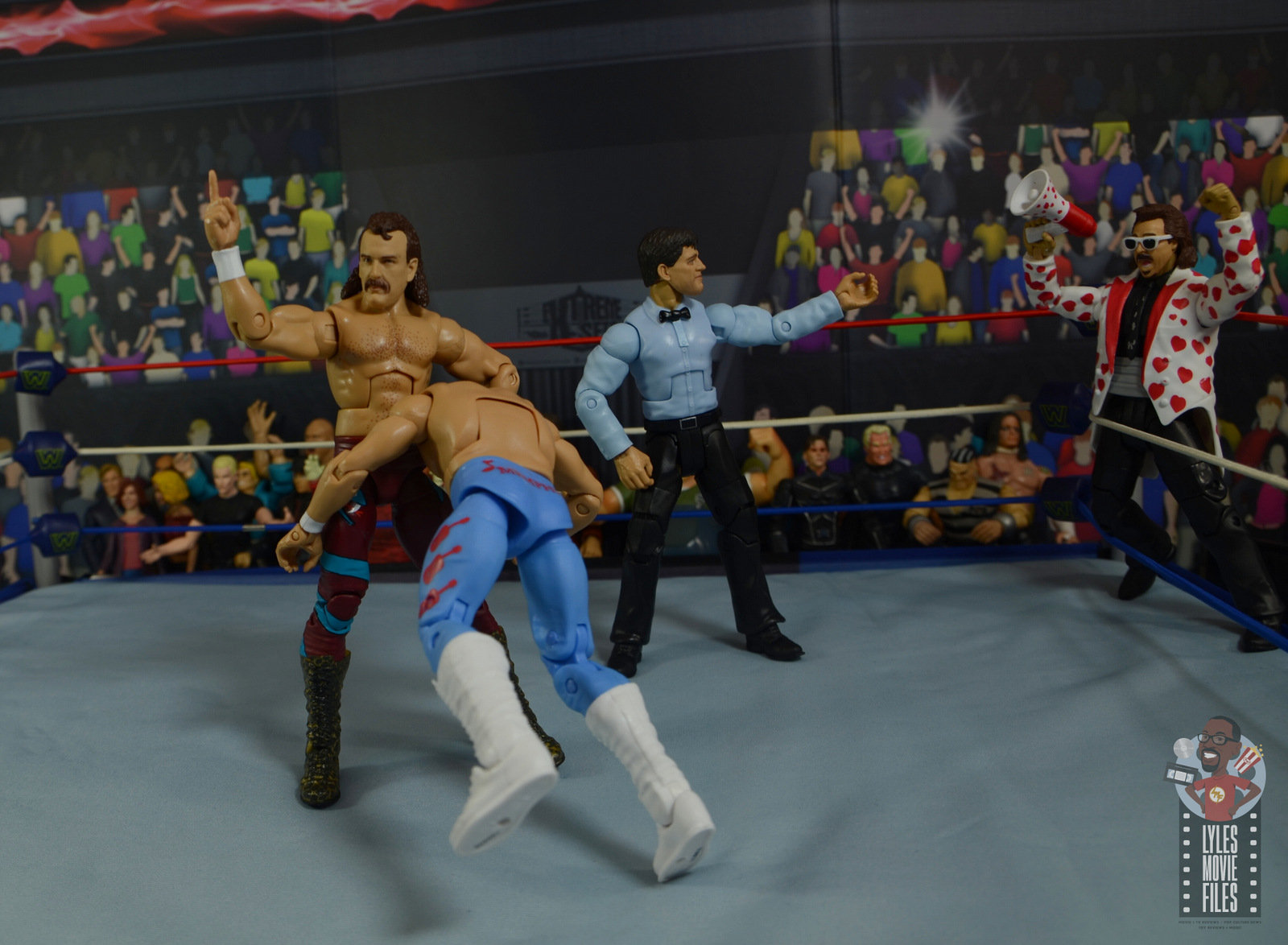 Worth it?  Jake the Snake is available for $20. This is a solid price, but even better if you can get it on a discount.

This is a very solid late-80s Jake the Snake and probably the best version of the character we’ve gotten from Mattel so far. If his torso was just a bit thicker he’d be perfect. 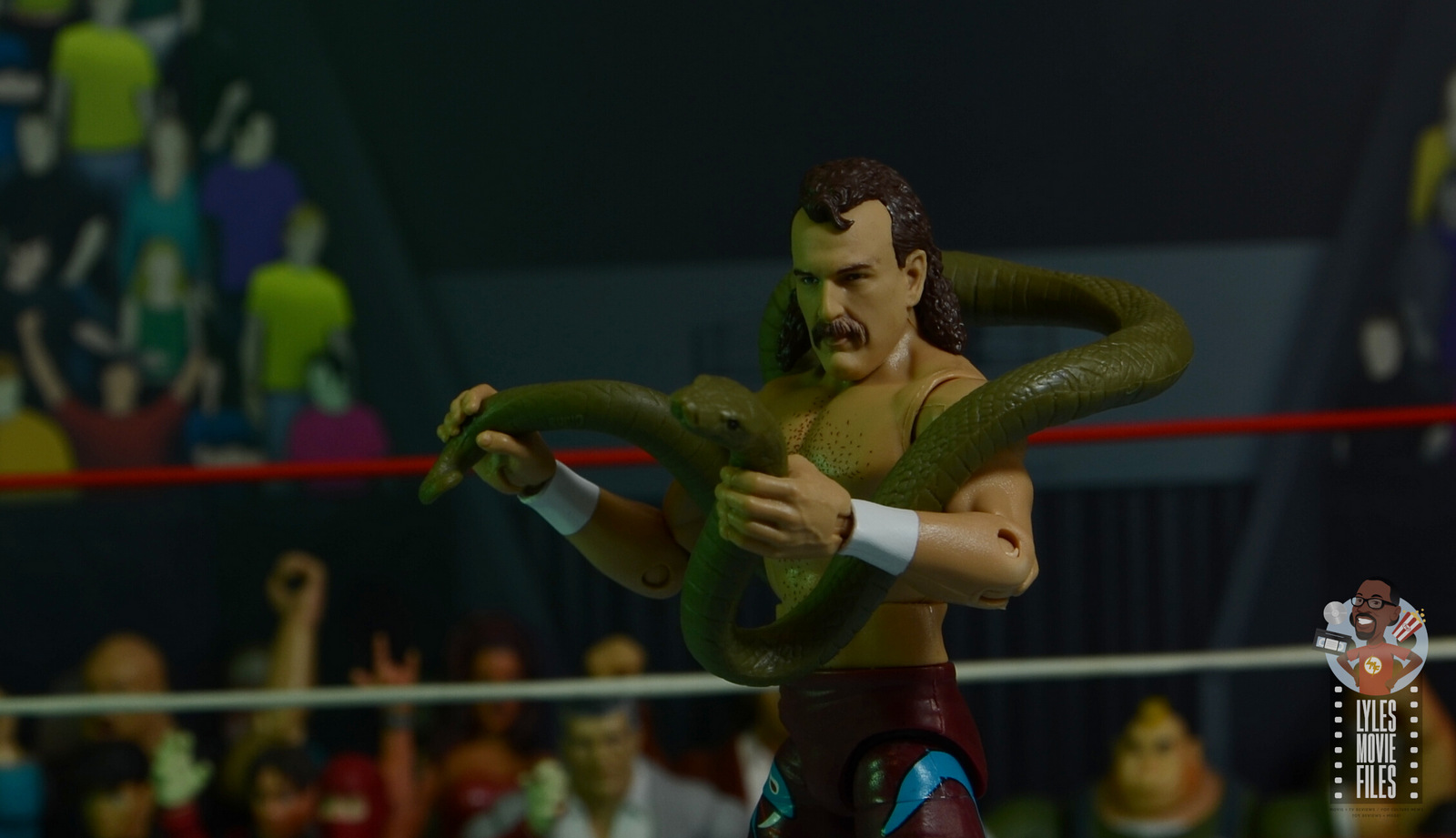 Where to get it?  The Legends line is a Target exclusive, but they’ve done a great job of stacking the line on shelves. The pre-orders are currently sold out on Target.com, but should be available online once it’s closer to the Nov. 1 release date.