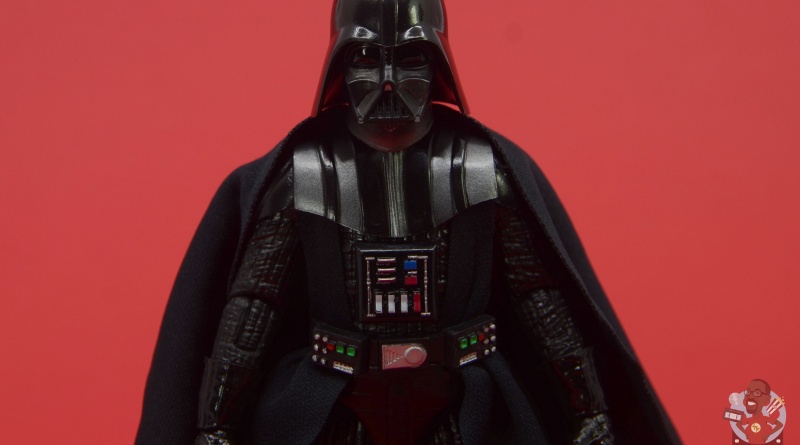 As far as iconic movie villains go, the line begins after Darth Vader. Bizarrely I hadn’t actually gotten around to getting a Vader in the six-inch scale. I’d been waiting for the perfect one and from a lot of accounts this Star Wars Black Series version in the updated packaging was a strong contender. Let’s see if this the chosen one.

Packaging: I really like this new style packaging with the connected mural. Empire Strikes Back gets the blue accent, which I love since that ties into the Hoth theme. 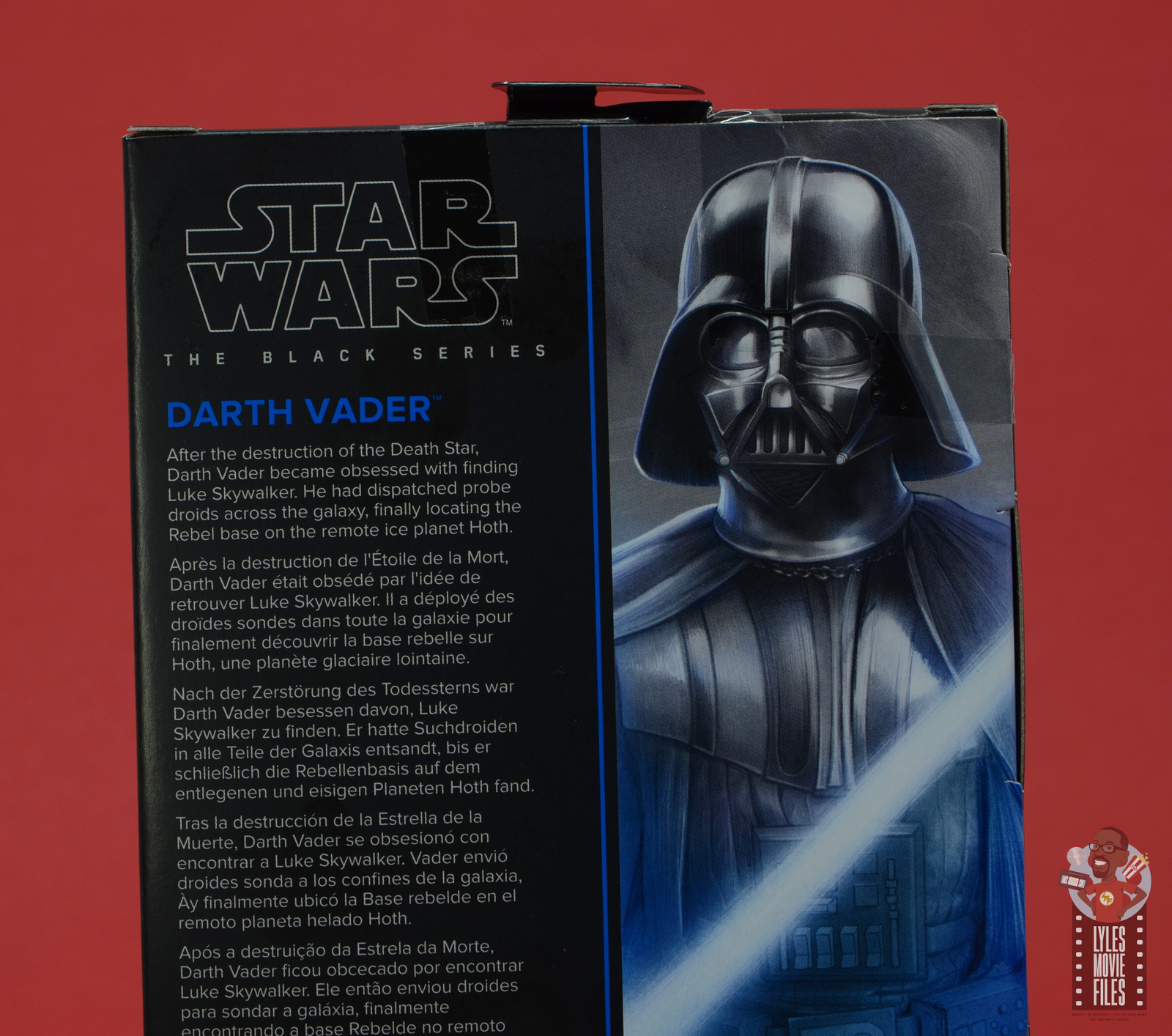 The bio is also cool as it focuses on Vader’s obsessive agenda to track down Luke Skywalker.

Likeness: From my memory and quick reference pics, this likeness seems dead on. I love the flow of the soft goods cape, which gives Vader a regal look. It flows down instead of flaring out. Going off of some other SWB Vader figures this one has a surprising amount of new sculpted parts like the helmet and chest panel. 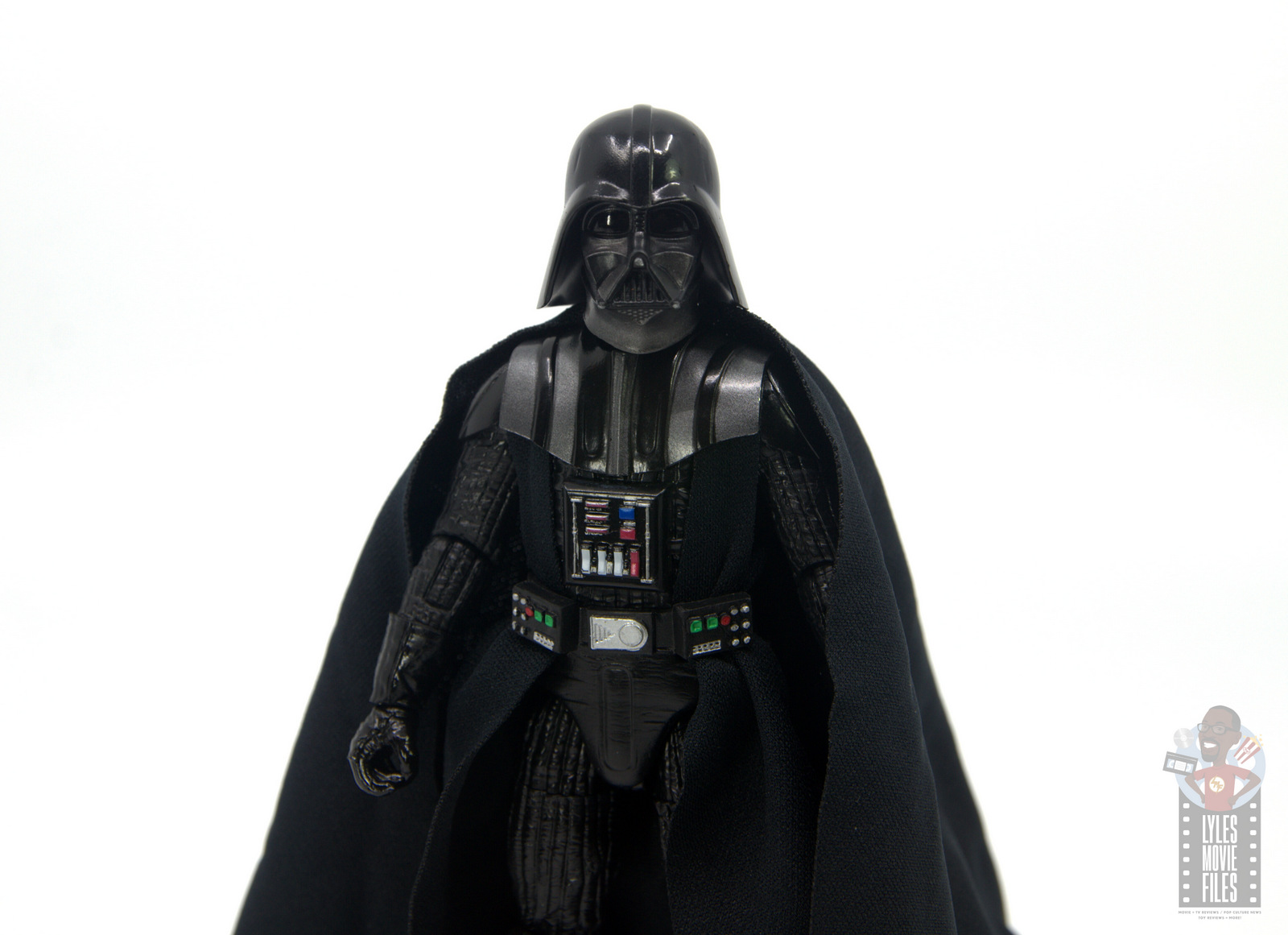 The helmet looks good with the scale as it’s not too big or too small. Since I hadn’t gotten a SWB Vader yet I hadn’t gotten a chance to appreciate the textured work on the arms and legs as they lead to the gloves and boots. 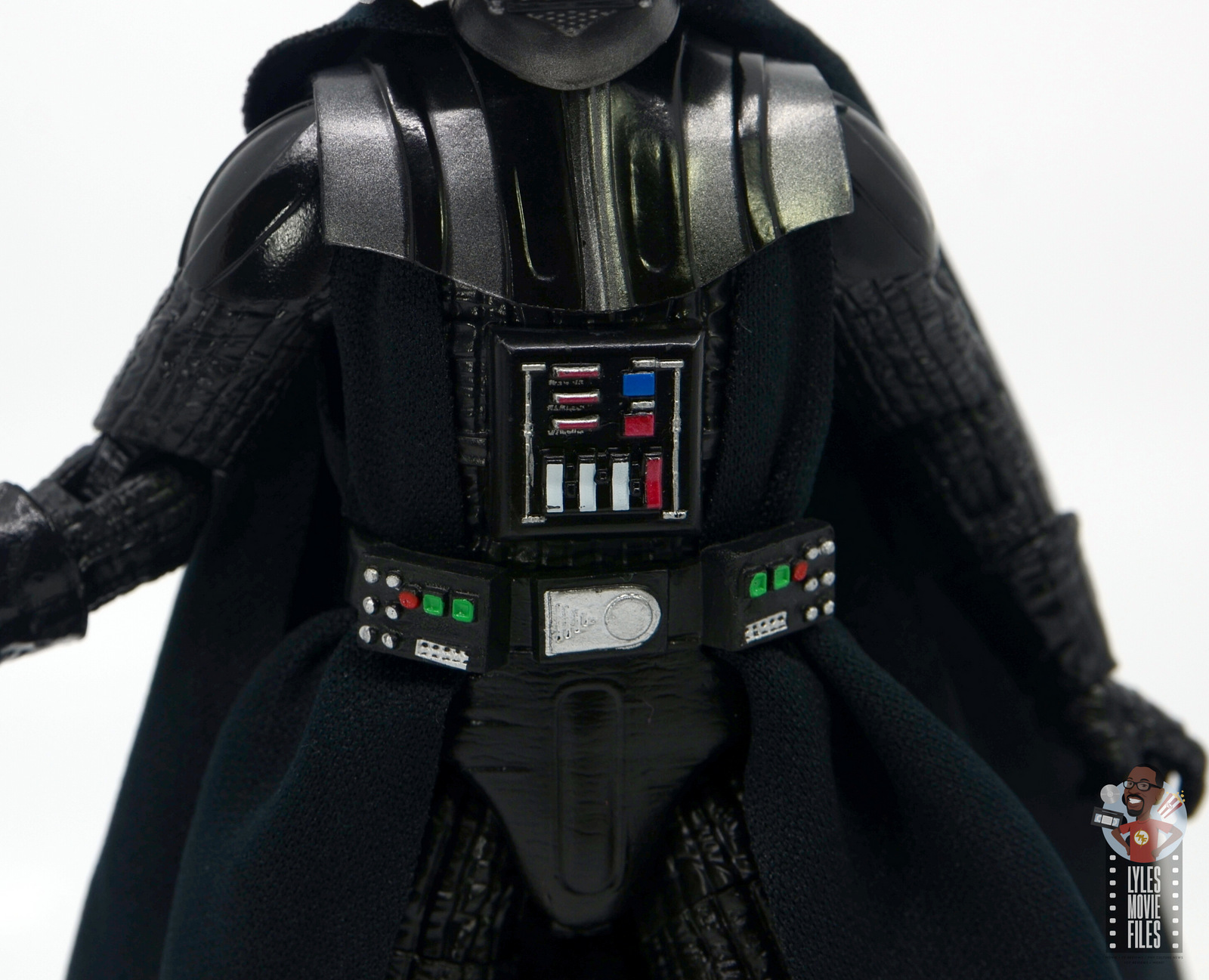 His left hand is done in Vader’s classic force choking gesture. Since he was having a lot of employee evaluation meetings, this hand was very necessary. 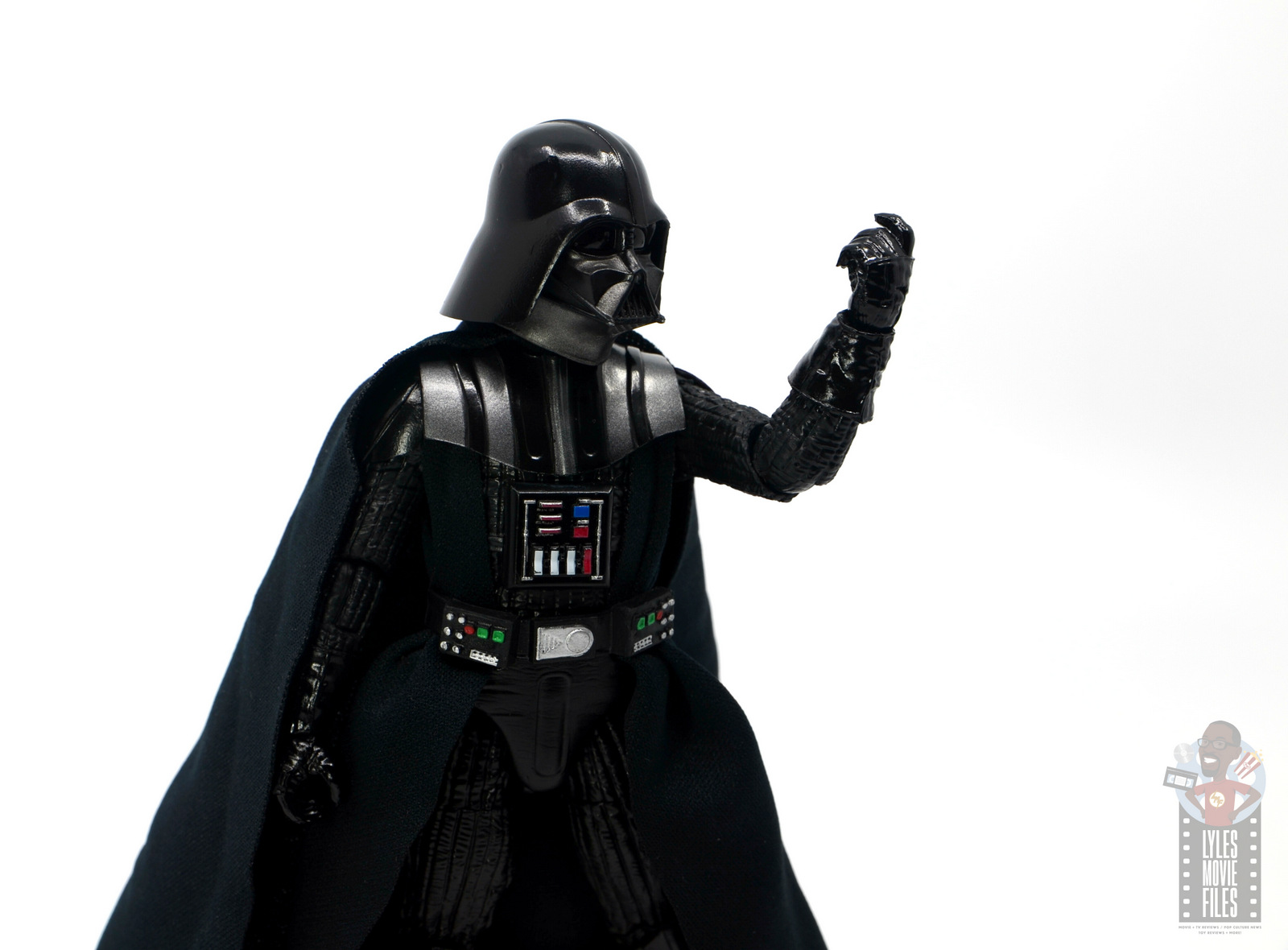 Paint:  For Vader, the paint job is all about the silver accents and the numerous buttons on his panels. Most of the paint apps on the buttons came out very sharp and the ones that are slightly faint aren’t a big deal at all. 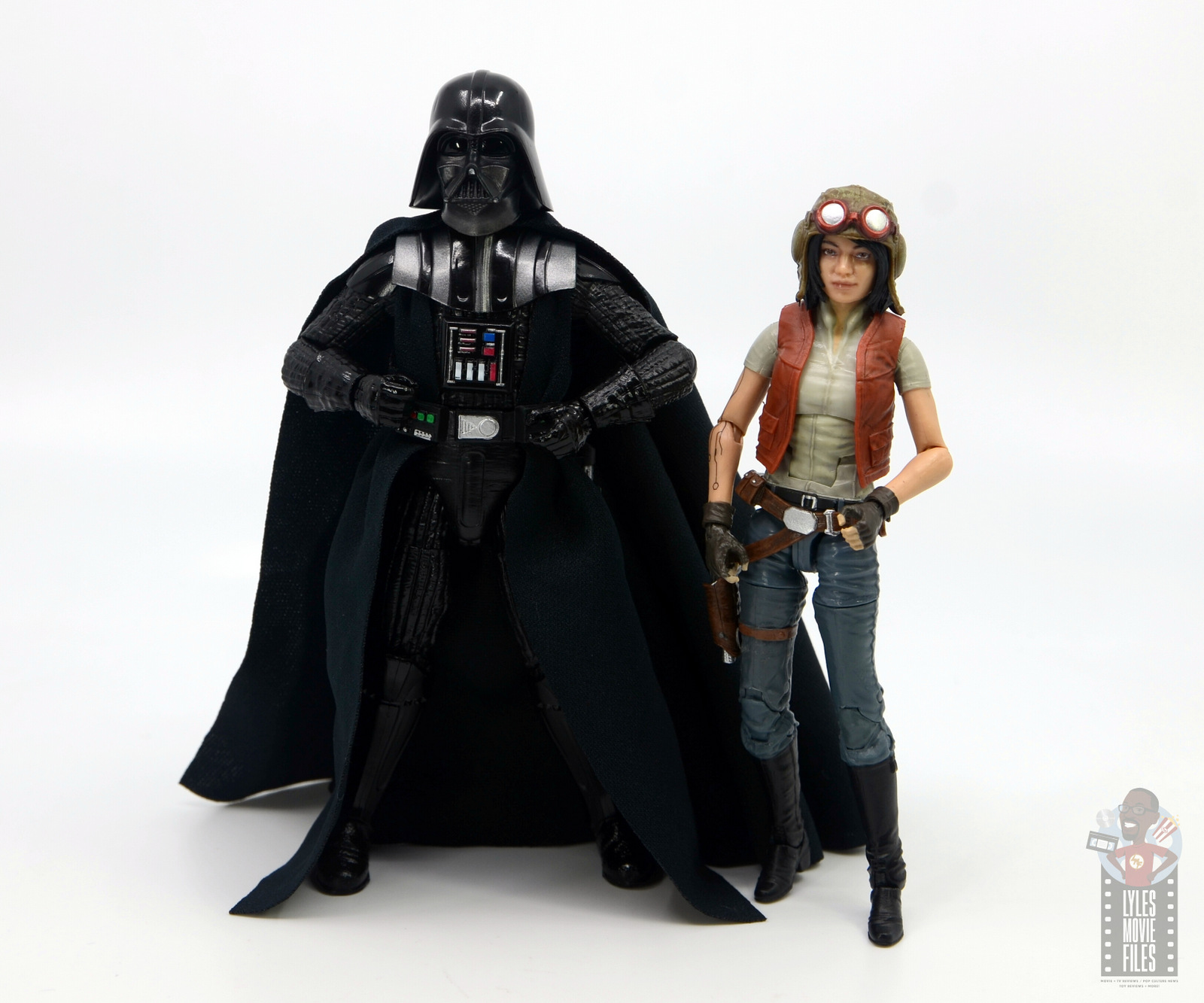 Articulation: Vader isn’t flipping around doing somersaults at this stage. He’s more of a menacing bully, who intimidates and overwhelms with his size. 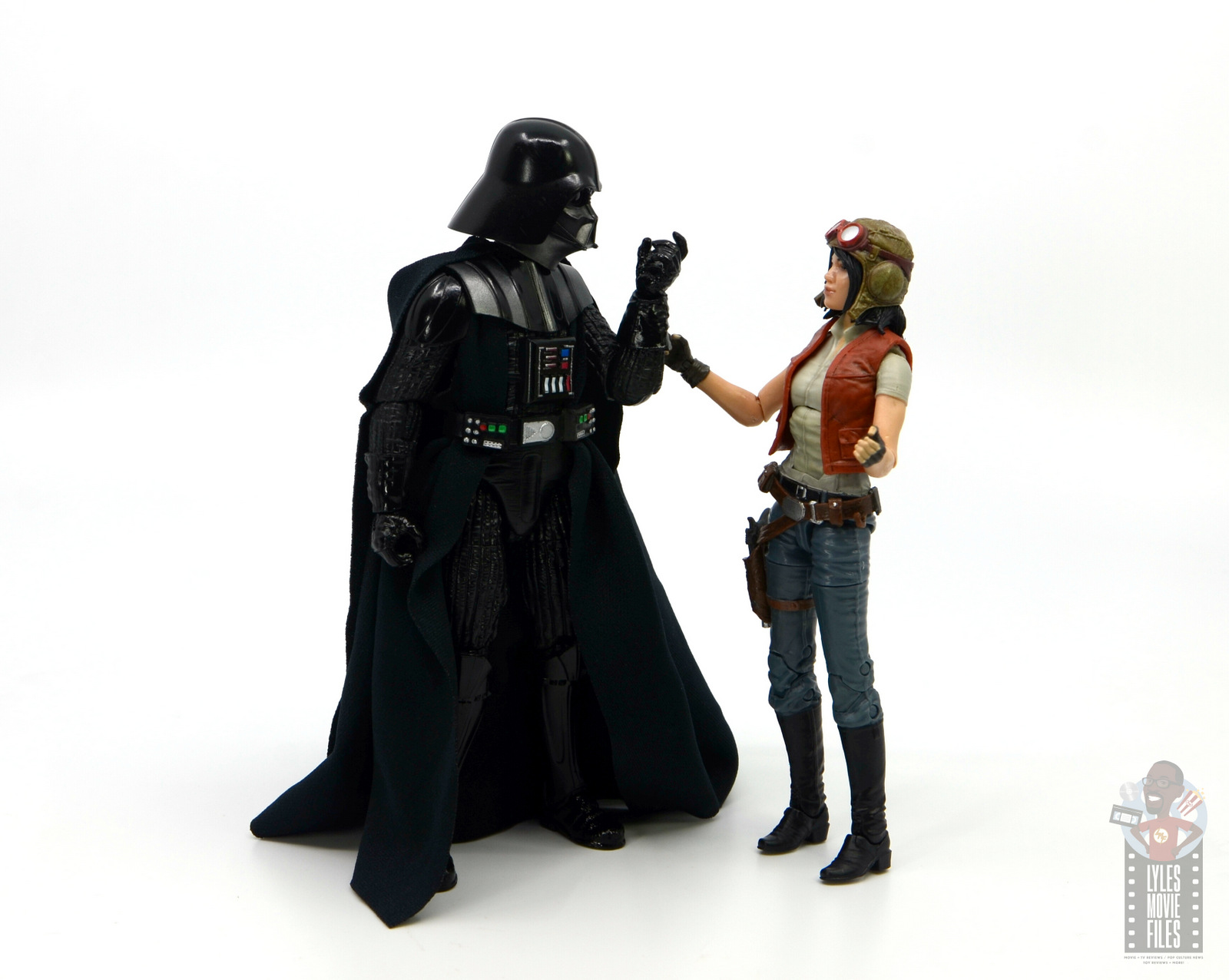 This figure didn’t need an excess of great articulation, but Hasbro provided it anyway. While my figure tends to want to go into a split when I position him he doesn’t have any problem holding more dynamic poses than a standard two-handed lightsaber grip. 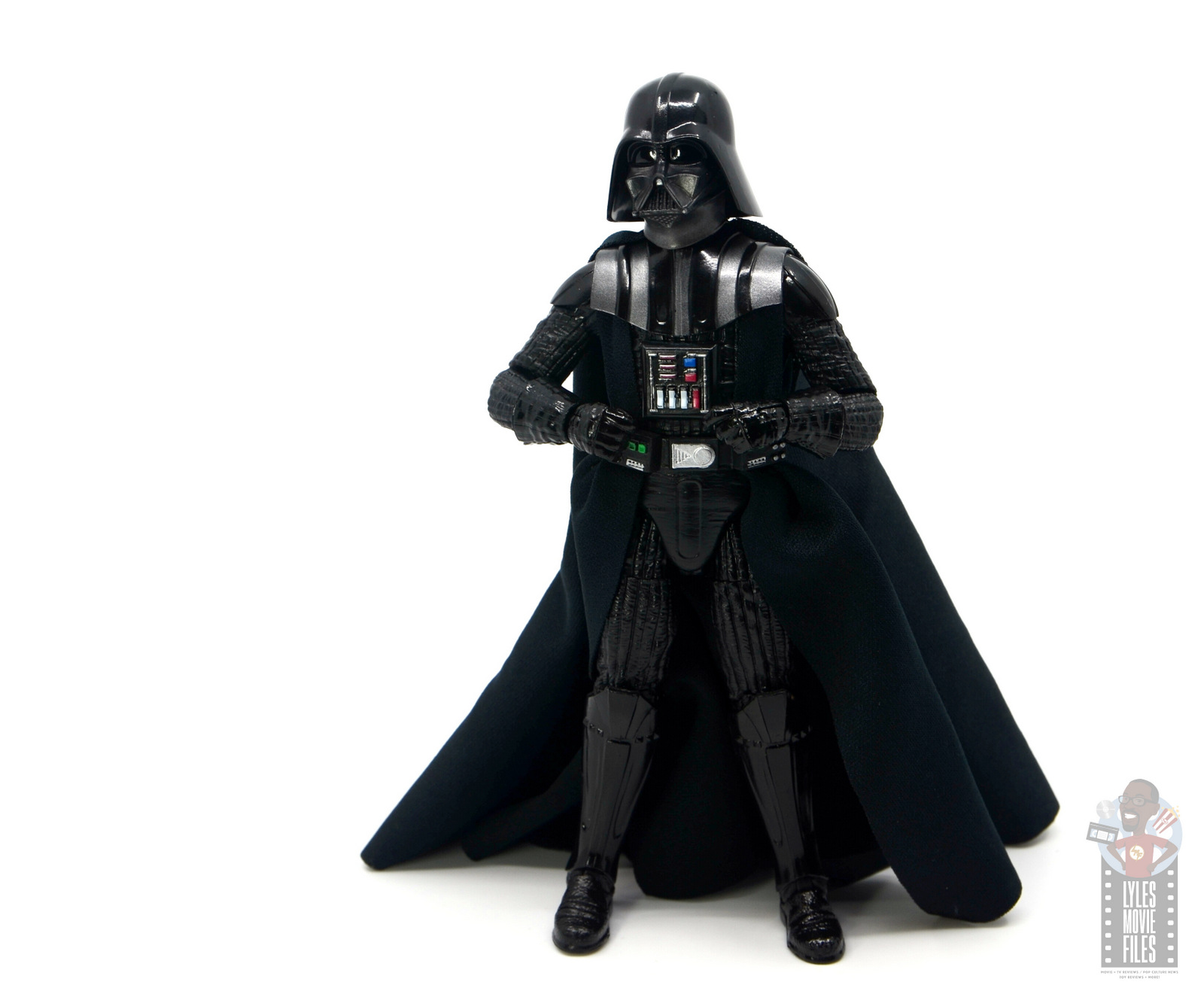 It’s not that often Vader is going to look up so the limited range there isn’t a problem. Like the Snowspeeder Luke, Vader features butterfly shoulder joints and is a definite step up articulation wise from earlier figures in the line. 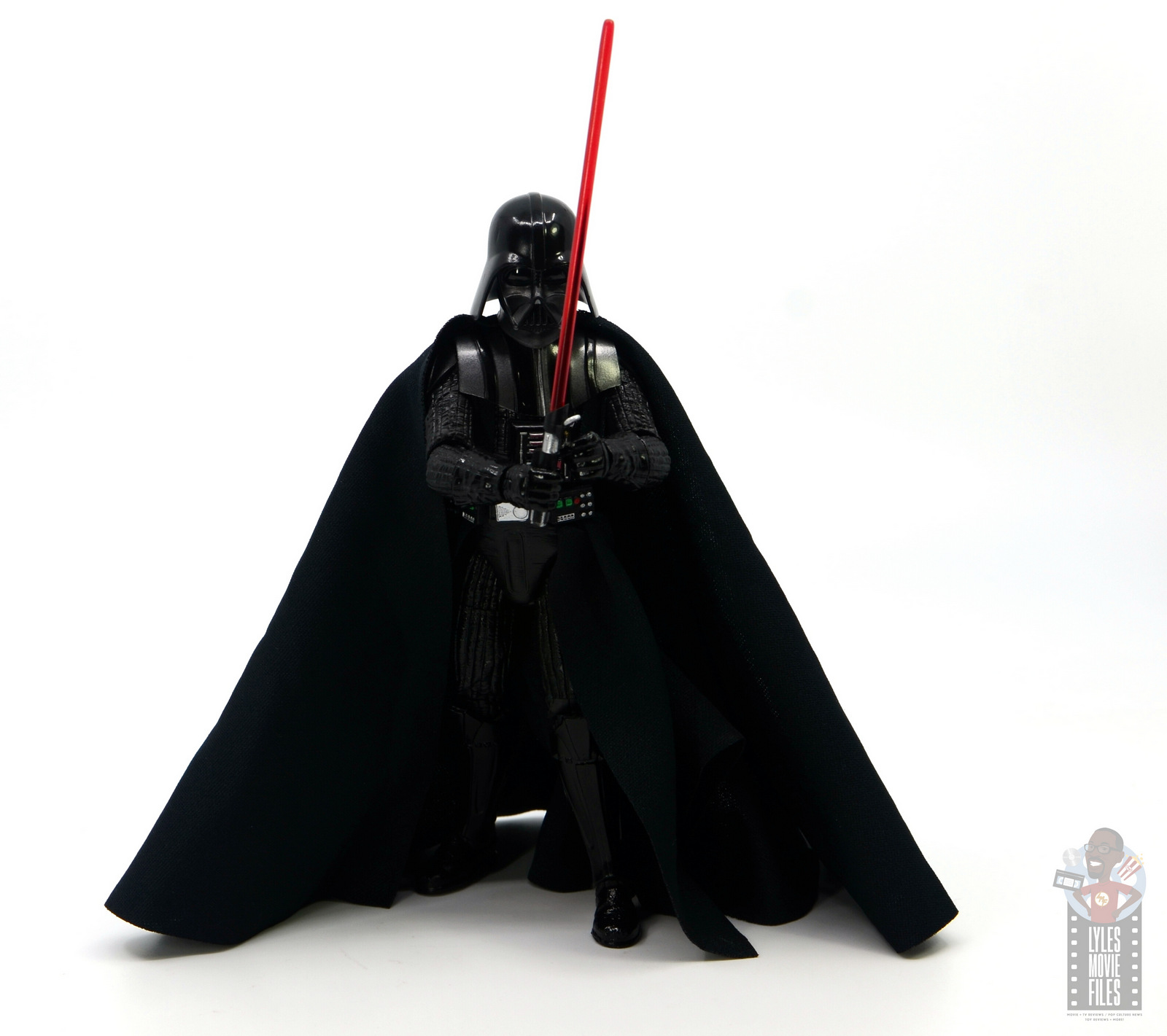 I really was impressed at being able to get a nice overhead lightsaber pose that Vader uses in the hallway in this third and final encounter with Luke in ESB. 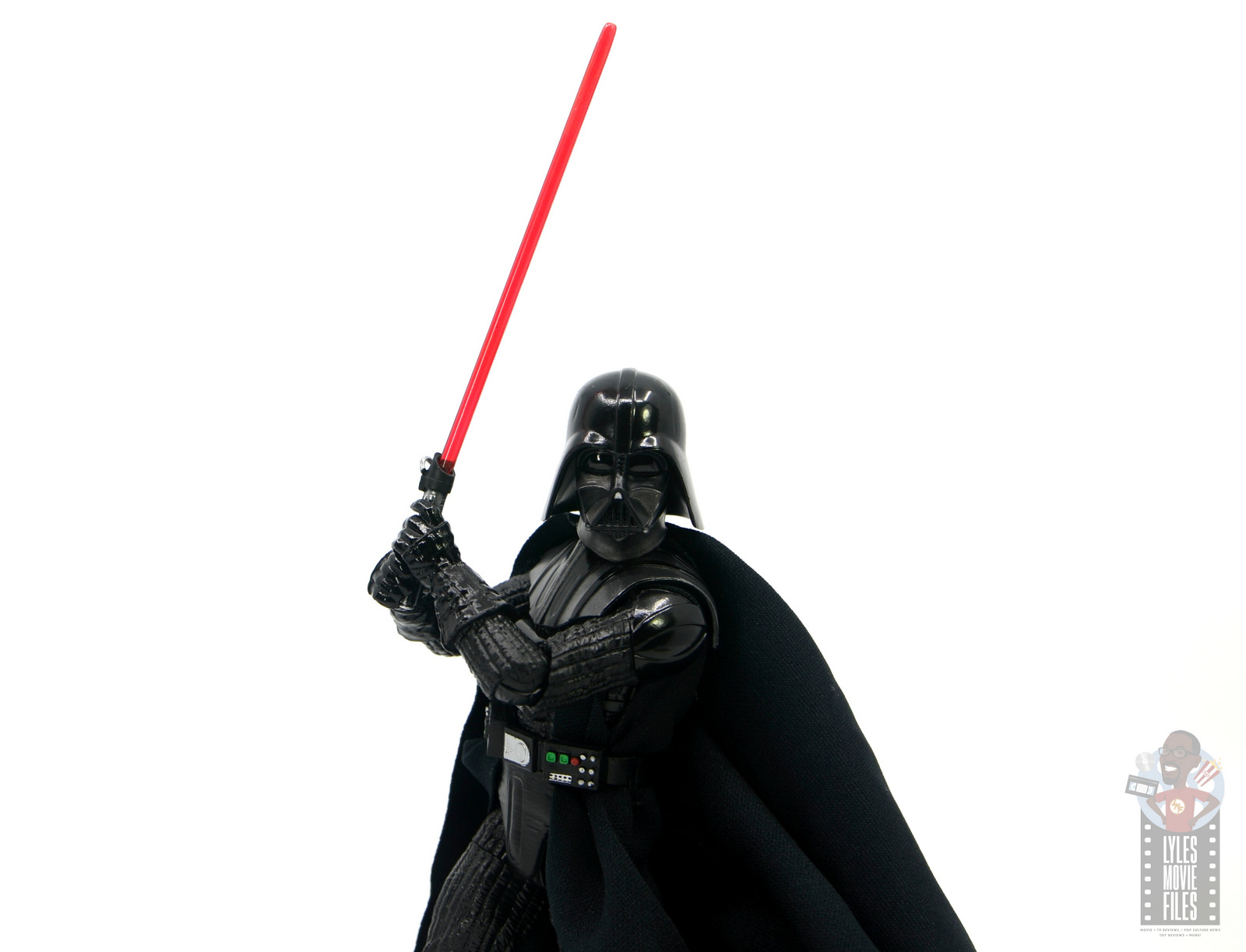 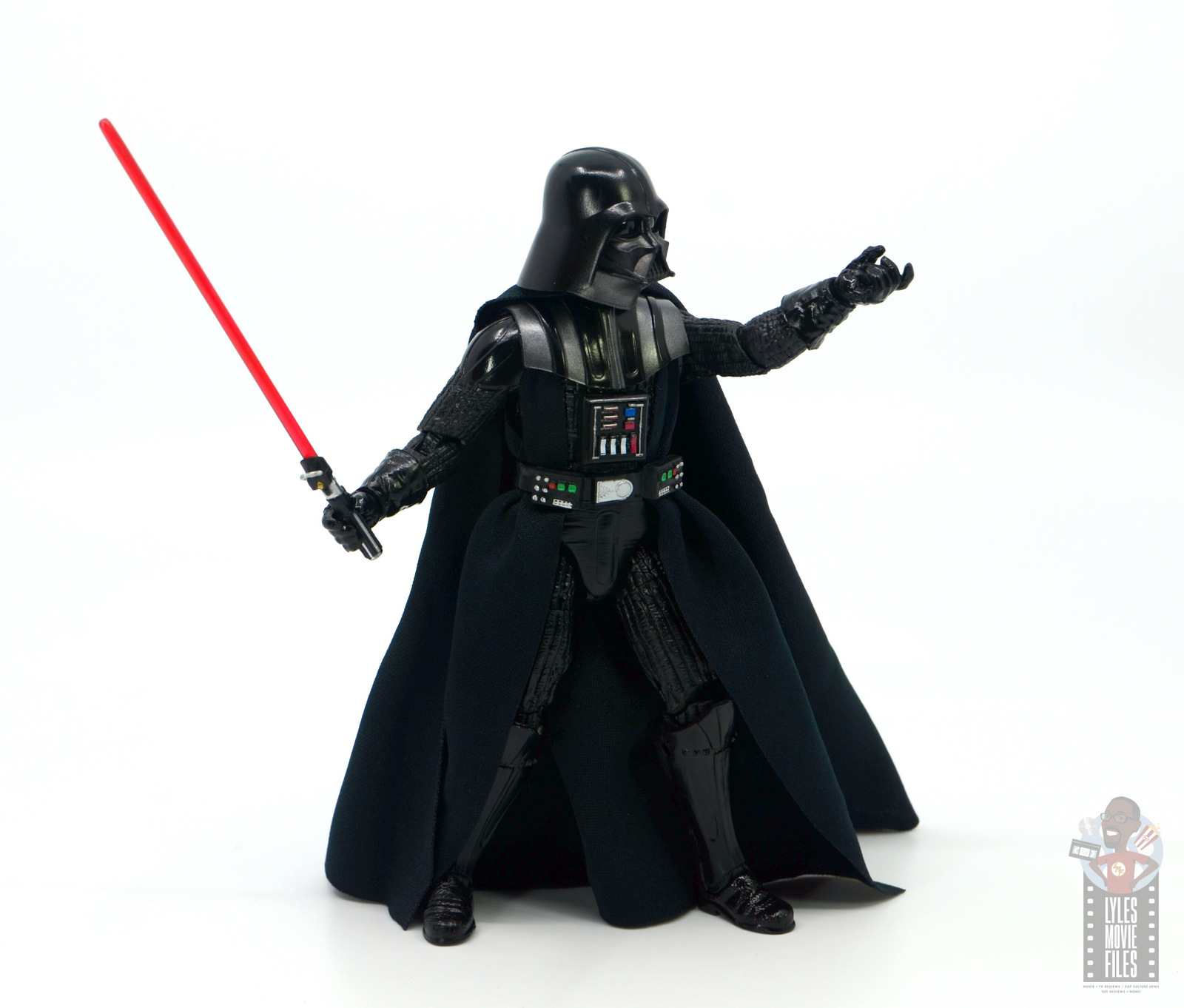 Accessories:  Vader doesn’t come with a bunch of accessories. 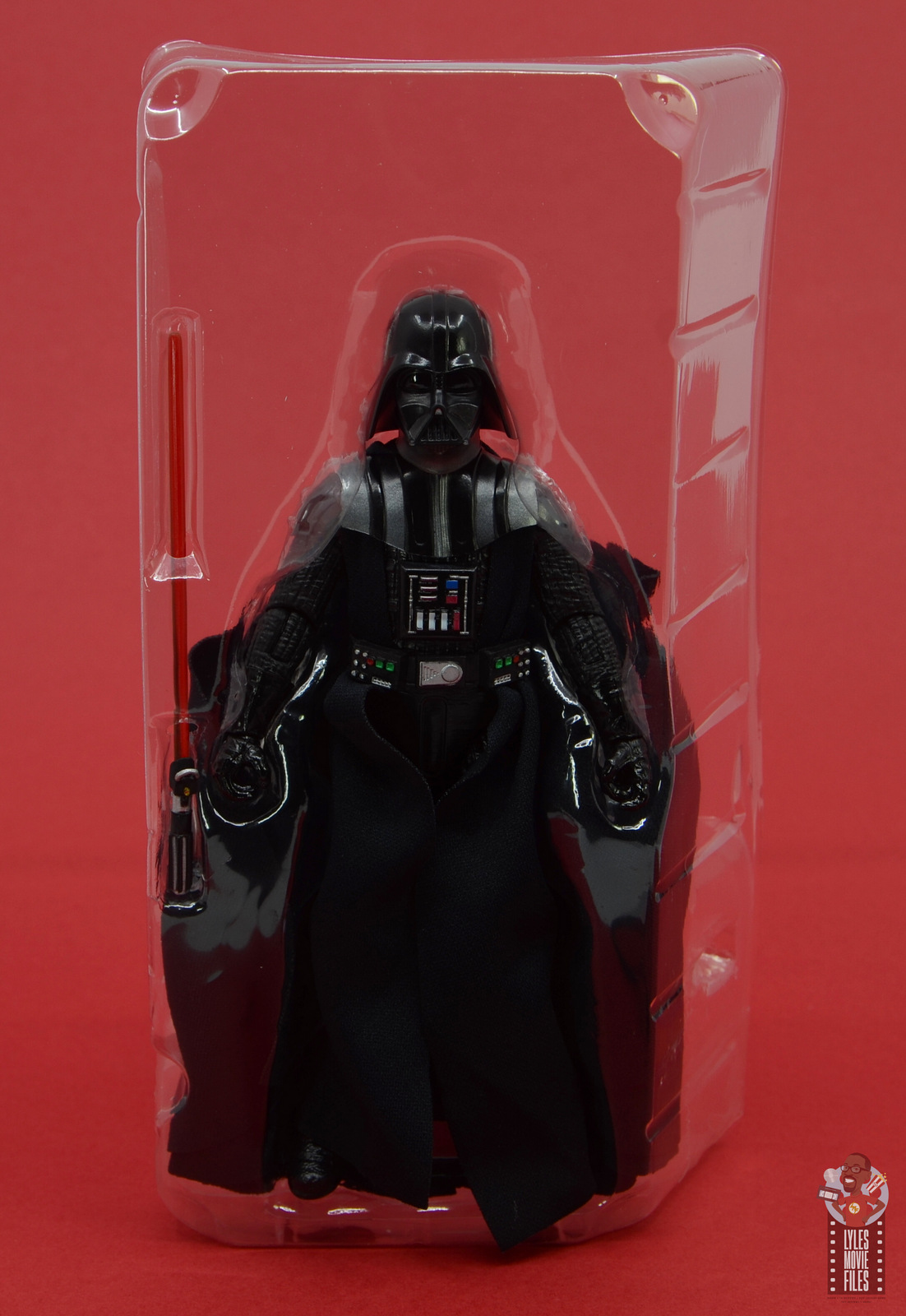 He has his lightsaber. The hilt is impressively (most impressively) detailed with very clean paint applications.

You can take the blade off and rest the saber hilt on the loop on his belt. It doesn’t stay on that great when you start fiddling with the skirt and cape, but it does look good when it’s in place. 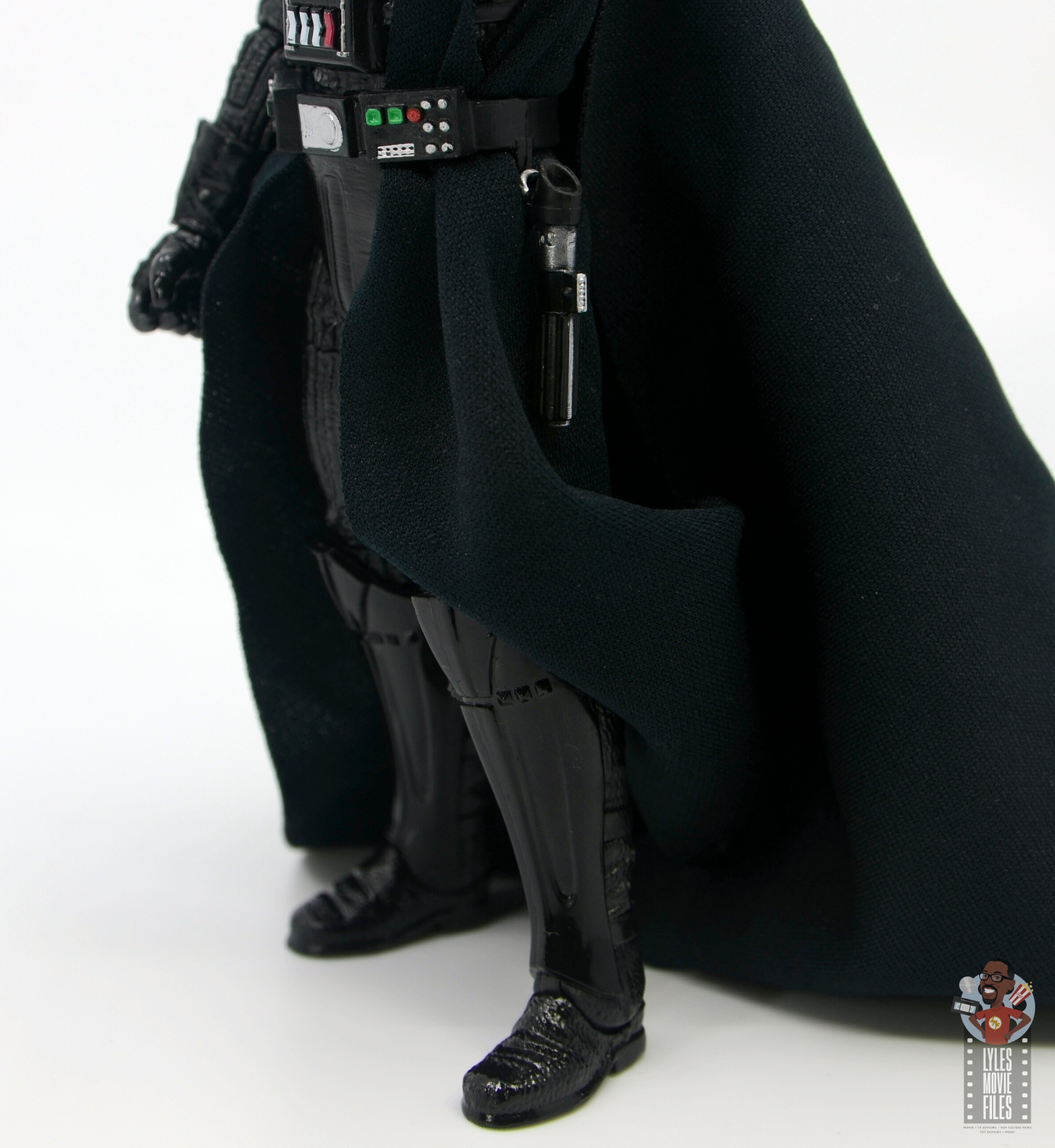 I do wish he came with a blaster shot blocking hand for when he crashes Lando’s luncheon. 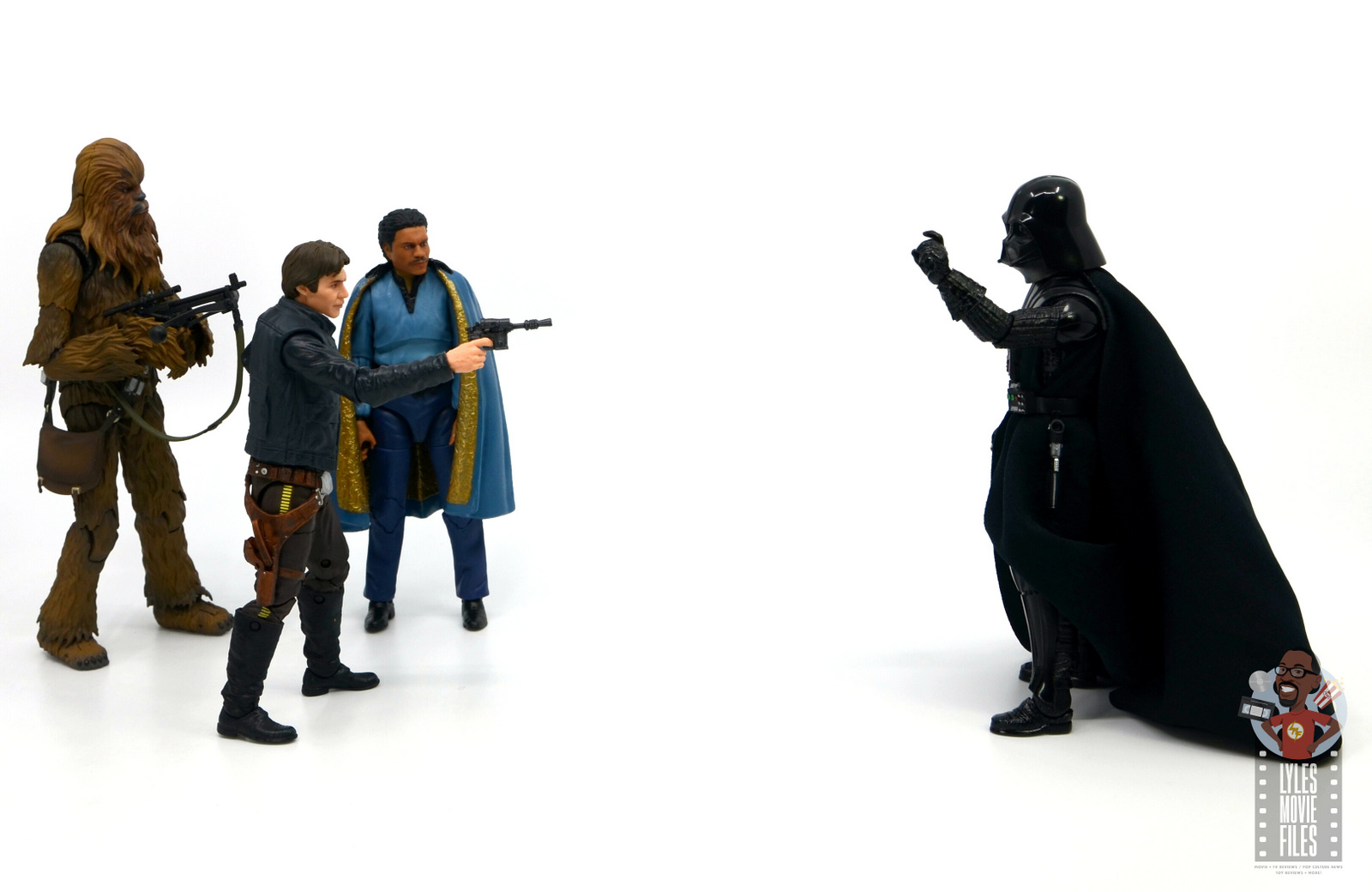 Worth it?  I got Vader for $20. That’s the going rate for the line and there’s no reason for him to be more expensive or cheaper later on. 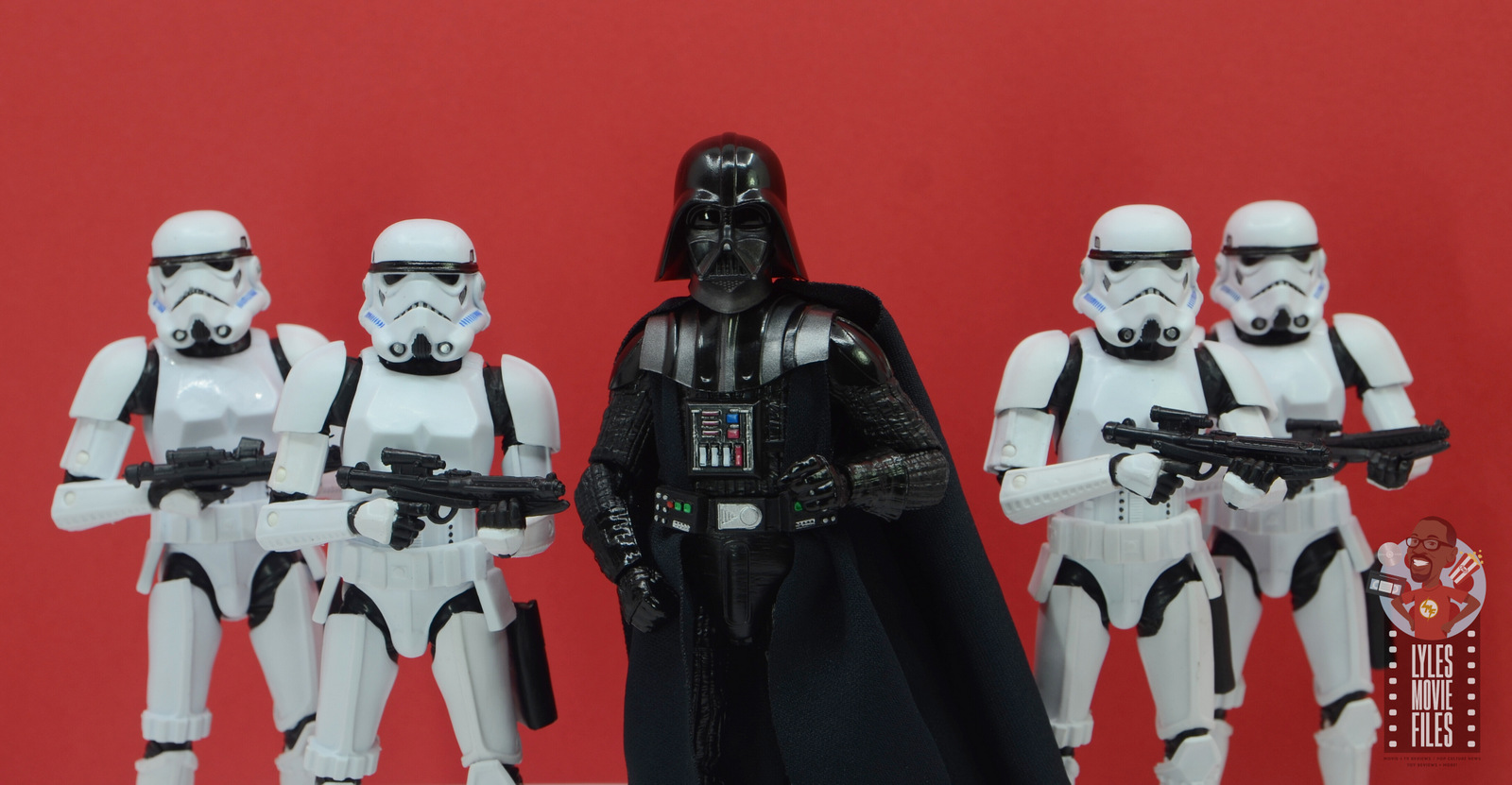 I ended up liking this figure a lot more than I expected and I don’t see how Hasbro could top this one short of adding in a voice chip to simulate the breathing and recordings of James Earl Jones. 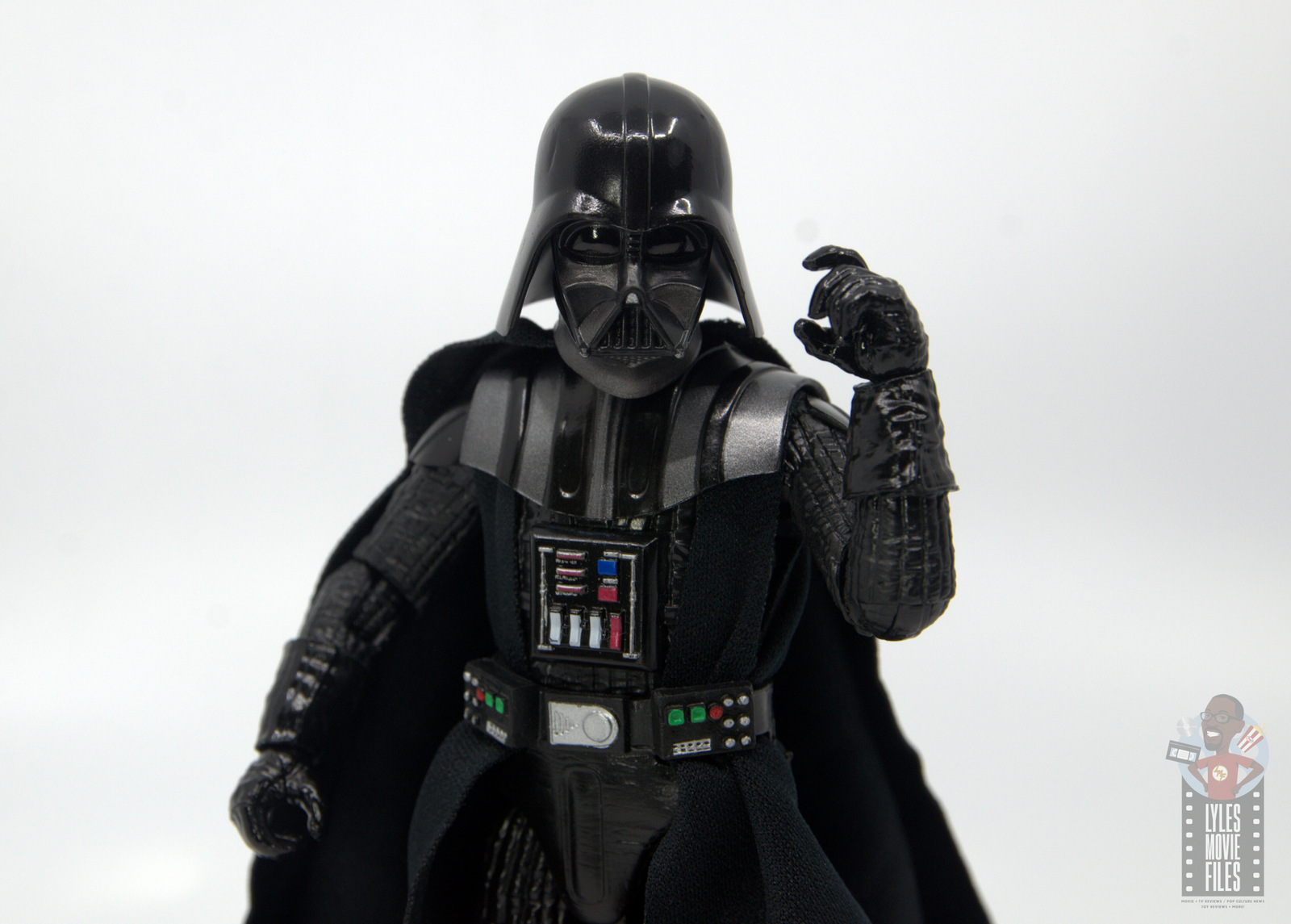 Where to get it?  Amazon has him in and out of stock, but to guarantee him, Entertainment Earth is probably your best bet since they still have him up for pre-order.