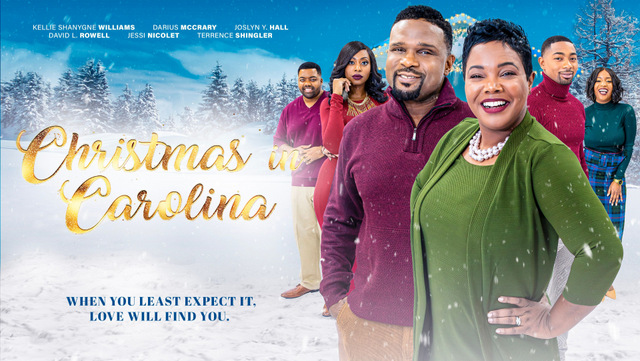 I’m a sucker for Christmas movies and my TV is constantly soaking up all the cheesy and cliché goodness available to stream and on cable TV. So it takes an especially lackluster effort like Christmas in Carolina to make me turn into a Grinch.

Workaholic Elle (Joslyn Y. Hall) doesn’t seem to have time for a relationship, but she’s just putting more time at work because she’s lonely. Her cousin, Blythe (Jessi Nicolet), sets her up with the endlessly patient and charming Wesley (David L. Rowell). Despite an uninspired first date, they do see each other again and sparks fly.

That’s good timing as Wesley is getting pressured from his mother, Charlotte (Kellie Shanygne Williams), to hurry up and get home for Christmas. In a fun casting bit, Charlotte’s brother is played by Darius McCray, who was Williams’ brother in the long-running Family Matters.

Screenwriter Stacie Davis writes a Hallmark movie on hi-speed. It robs the Wesley and Elle’s courtship of any tenderness and authenticity. Instead, it feels like Davis crammed in two decent stock romance movies into one making sure to check off the expected boxes regardless if they make any sense in the film’s context.

Some problems could have been avoided with a perspective of time. Wesley and Elle have a disastrous first date with no obvious spark or chemistry, but there’s no time to let that breathe before Elle immediately starts realizing she has feelings for him. Just as suddenly they’ve advanced beyond the dating phase and Wesley wants to bring her home for Christmas. And just as quickly, Wesley wants to propose. Maybe if a little countdown to Christmas banner could have helped explain that Wesley and Elle didn’t develop all these feelings over a week.

Davis would have been just fine starting the film with Wesley and Elle already dating with the main drama coming from his worry about proposing back home. The setup is so prolonged in this 76-min that there’s no time to develop any sublot. Characters have to say things to fill in narrative gaps like Elle’s cousin apologizing that Elle lost her parents in a car crash that actual people, let alone cousins, wouldn’t say in a basic conversation. That’s implied knowledge that wouldn’t merit stating.

Given the title, it’d be nice to get some scenes in iconic South Carolina locales, but budget restraints may have limited being able to offer a cinematic tour. Director Peggy Williams leans too heavily into montages when Elle and Wesley arrive in South Carolina instead of having dialogue with Elle interacting with the family.

There’s some technical issues with lighting not staying consistent within the same scene, some sound distortion and the dialogue not always synching up with the actors’ mouths. Editing is the biggest issue as some scenes feature a disorienting amount of different quick cut camera angles.

For the most part the acting is decent, but it doesn’t feel like any of the performers had much time to invest or get familiar with their characters. Too often their line delivery hints at a lack of confidence or is flatly stated.

Christmas in Carolina had some potential, but felt like it never managed to come together to make for a gift that keeps on giving.