After an exciting season premiere that introduced another spin-off worthy character, the tease of an Original Trilogy fan favorite and a new quest, The Mandalorian focused on something even more important — continuity.

I know it’s wacky for a modern Star Wars property to remember what preceded it, but The Passenger showed how vital its brief history is in advancing subplots and showing that previous actions have consequences. As well as a reminder that it’s important for Mando to keep The Child constantly fed so he doesn’t wipe out endangered species.

Mando’s search for other Mandalorians at Mos Pelgo wasn’t productive, but at least he’s got hi souped-up speeder to get back to Mos Eisley quick enough. Scratch that thought. A bunch of bandits learn the hard way that it’s not wise to mess up a Mandalorian’s ride. One of the strengths of the show is Mando’s unique fighting style and how he incorporates his gadgets in taking out his adversaries. He rarely uses the same approach twice and that variety keeps the fight scenes unpredictable. 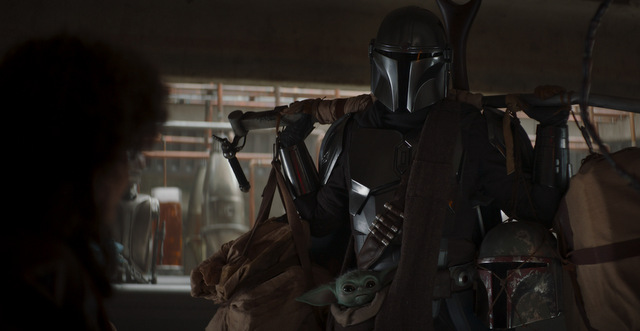 Peli Motto has a new lead for him provided he can take a passenger safely to the system without using Hyperdrive. The passenger, a frog like creature (Misty Rosas), has the last eggs of her species to deliver safely and the strain of Hyperdrive would wipe them out. Maybe not as quickly as The Child, who develops a taste for the eggs when no one is watching.

This is the first episode to paint The Child as sneaky and mischievous as opposed to the precocious adorable baby yet he’s likely in the toddler stage so that seemed completely appropriate.

Writer Jon Favreau explored more of the post-Empire landscape with New Republic X-Wing pilots — Trapper Wolf (co-executive producer Dave Filoni) and Capt. Carson Teva (Paul Sun-Hyung Lee, Kim’s Convenience) — making sure Mando was on the up and up on his travels.

We’ve kind of been conditioned that the Rebels are the good guys so this moment of them “harassing” Mando put them in a different, authoritative light — for the moment.

This led to a thrilling space chase that Director Peyton Reed (Ant-Man and The Wasp) made extremely fun with some hints of a Cloud City or asteroid field run from Empire Strikes Back. While he dodged the pilots, the Razorcrest gets dinged up after crashing in an snowy tunnel. Just make sure it’s a cave.

The Child got Mando and the Frog Lady into more trouble by munching on some different eggs in the tunnel triggering a swarm of spiders of all sizes. Reed has already shown a strong sense of staging exciting chase sequences so it wasn’t surprising this was so well done with a real sense of danger from the spider hordes. It was a nice touch actually having the Frog Lady start hopping instead of running to further distance herself from the spiders.

I also really appreciated that this was a situation Mando couldn’t get out of on his own. The X-Wing pilots helped him fight off the Razorcrest size spider after running his “plates” and found he brought in three wanted felons (from last season’s stellar The Prisoner episode). Whoa, continuity matters here.

I’m half joking, but it is nice to see what Mando (and The Child) do over the course of various episodes could come back to haunt them or as in the case here, bail them out of a tight situation.

There wasn’t any last minute cameo from any of the rumored characters, which allowed for a nice and simple self-contained episode. Given the blockbuster style nature of the season premiere, this was a smart approach to remind viewers The Mandalorian can successfully go small as easily as it goes big.