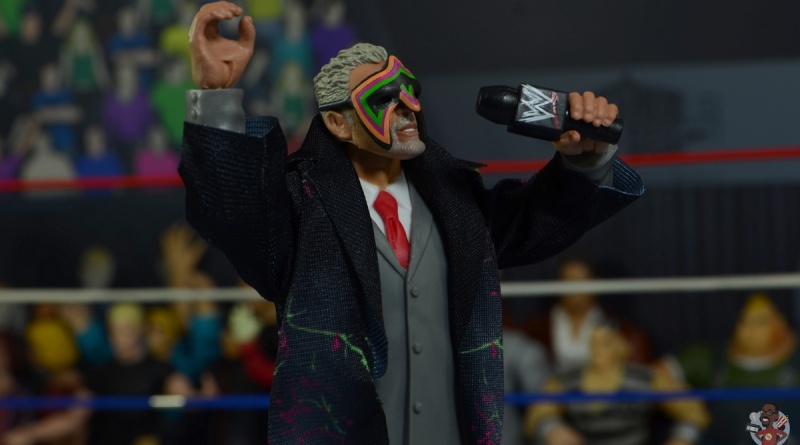 The Ultimate Warrior’s death following his reconciliation and final appearance in a WWE ring led WWE to do a whiplash inducing take on his legacy. When they once besmirched him and ridiculed him every chance they got, the promotion has basically made him a patron saint of wrestling. It’s a little odd.

Regardless, Ultimate Warrior was a major, legendary player during the WWF’s heyday and his in-ring career was definitely worthy of celebrating. Mattel hasn’t been bashful about releasing as many Warrior figures as possible and it’s eminently fitting that they release this final Warrior as the bookend figure with Legends Series 8.

Packaging:  I love the packaged pose of Warrior here as he looks like he’s wrapping up his memorable final promo before he says farewell to the WWE fans. 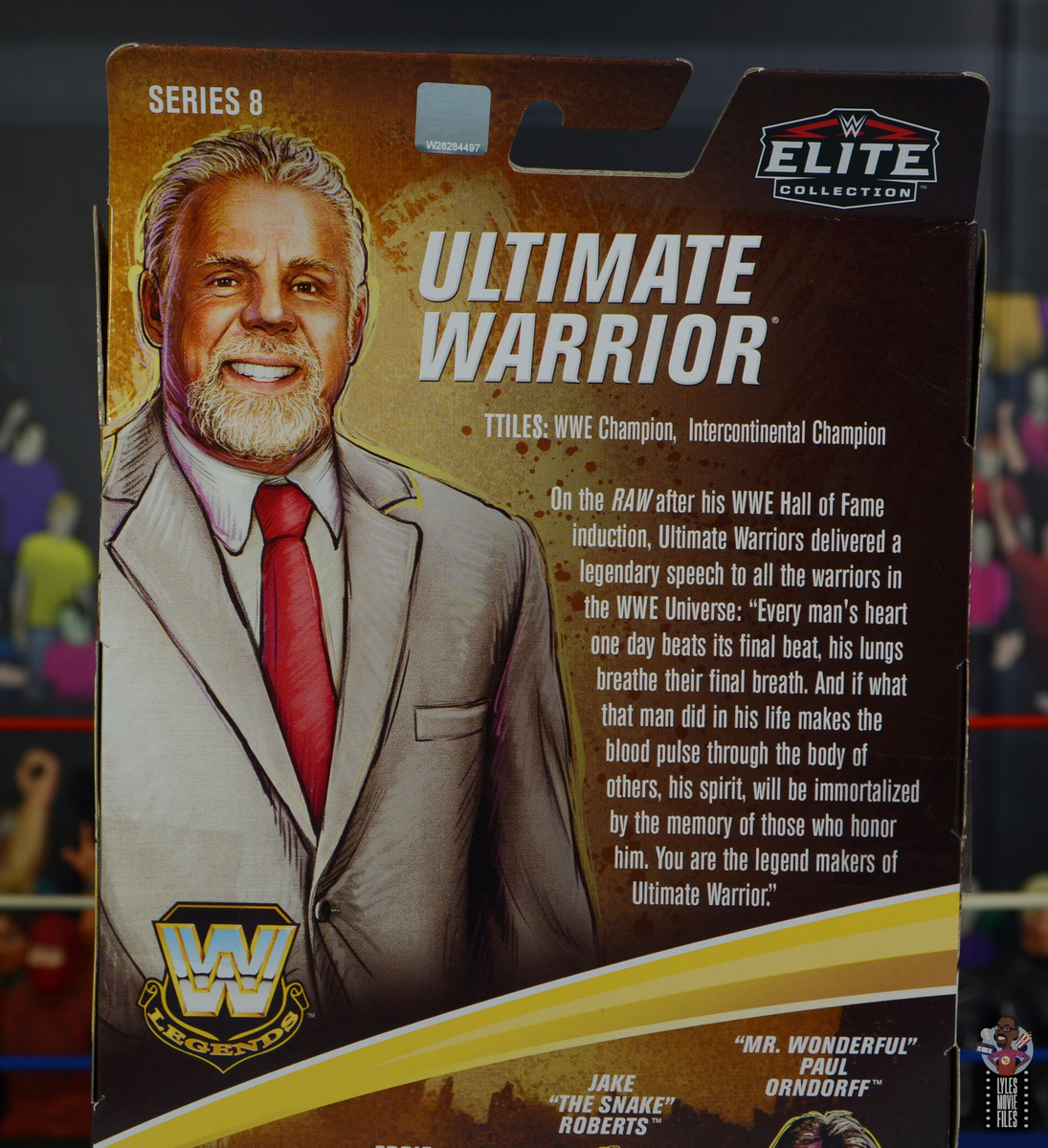 Likeness:  Essentially this is the standard suit body with an updated older Ultimate Warrior head sculpt. That doesn’t sound all that exciting until you check out the head sculpt. The likeness is supremely impressive at this scale from the hairline, line work on the facial hair and the overall expression. Mattel head sculpts have improved a lot over the years thanks to the True FX face printing and this might be one of their best. It’s really impressive. 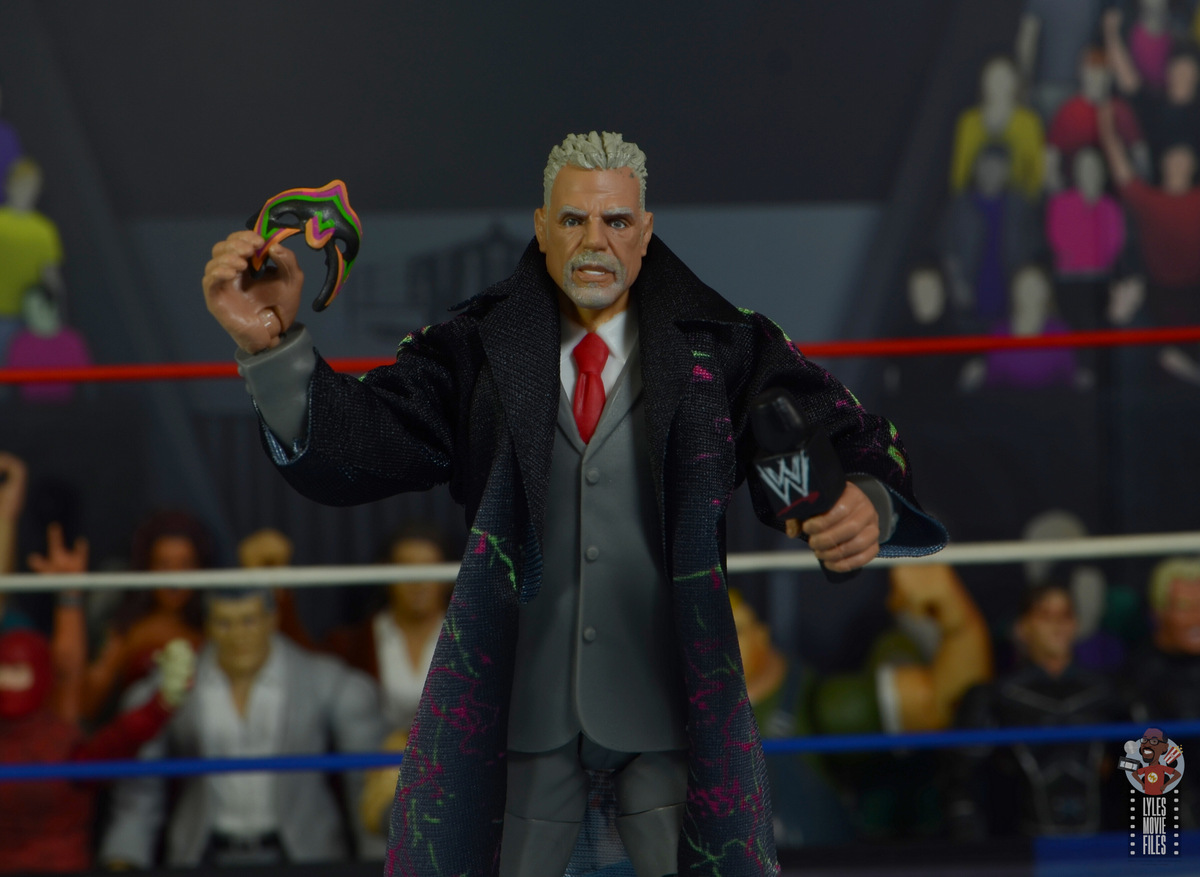 It would be cool for Mattel to have added the Hall of Fame ring, but that’s not something I’m taking away from this figure.

Scale:  Ultimate Warrior was 6’2 and I suppose for the sake of this figure’s appearance you could pair him with fellow inductees Razor Ramon, Jake the Snake Roberts, Lita and Mr. T for scale reference. 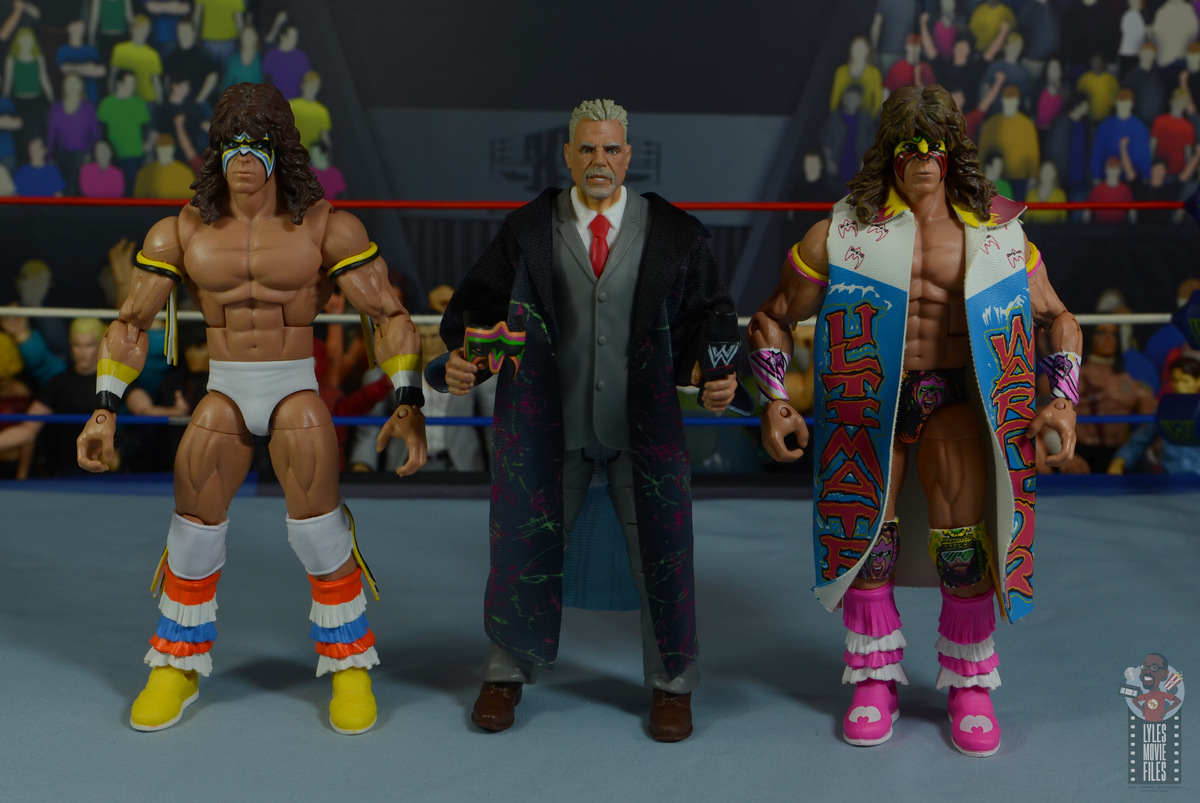 Now having said that I kinda want to get more suited figures to put the Legends in HOF gear. I’m sure there’s a small market for that, but I’d be down for a line focusing on these guys getting their recognition on Wrestlemania weekend. 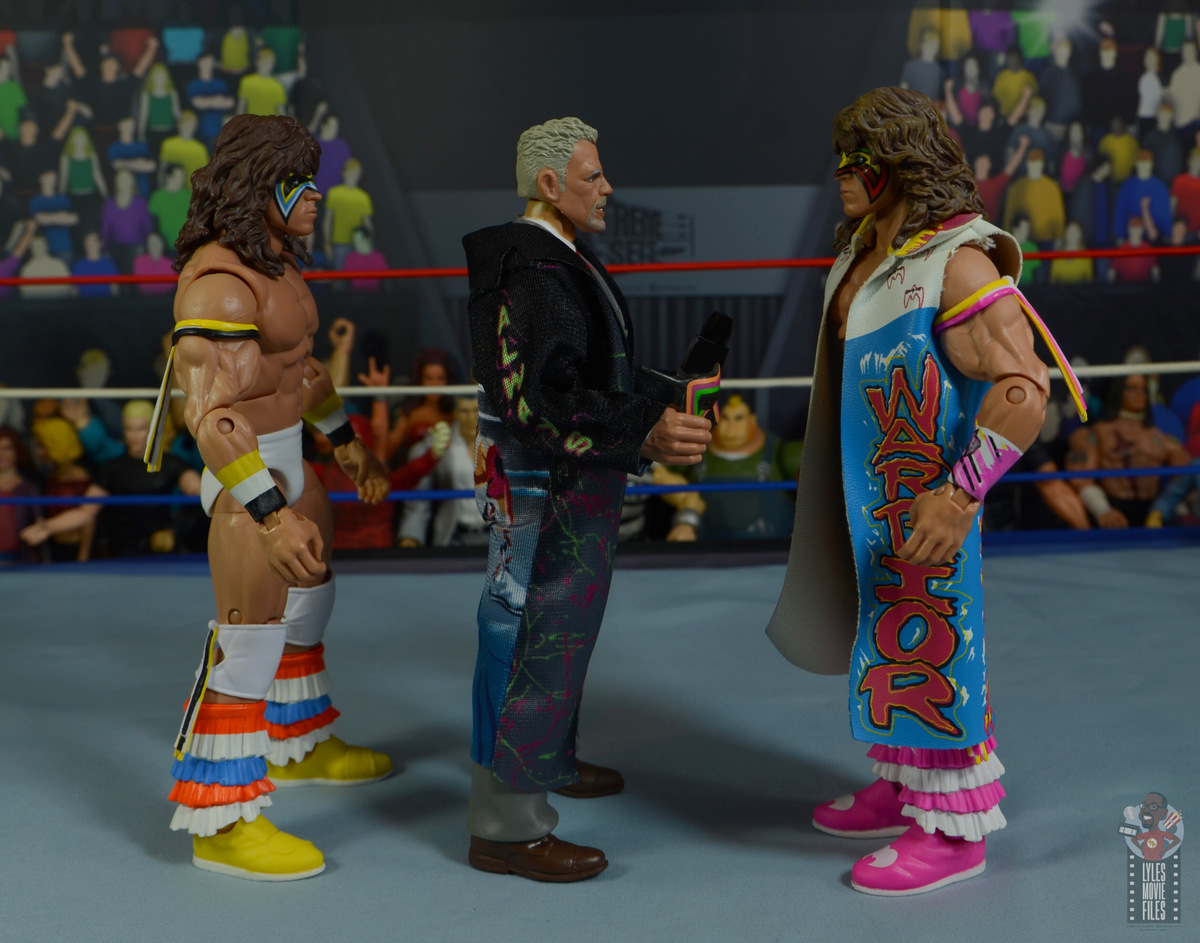 Paint:  Mattel’s impeccable paint job reputation might have taken a hit this year, but the norm is that their figures are flawless on the paint end. Besides a random grey splash of paint on the left side of the head, Warrior is otherwise fine.

Articulation:  This particular version of the Warrior doesn’t need any more articulation than the norm. This is purely a waving to the fans and maybe grabbing the ring ropes while cutting a promo version. On that front the articulation scheme covers everything I need with this one. 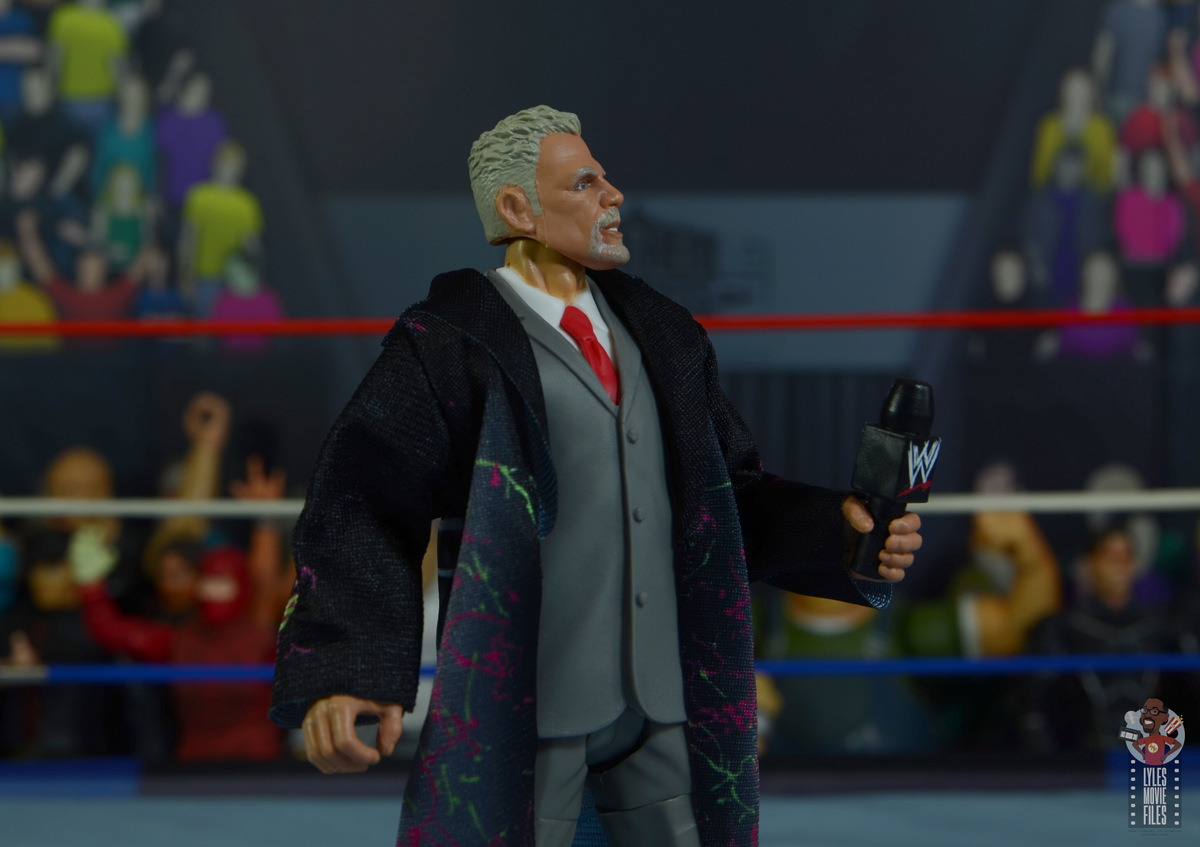 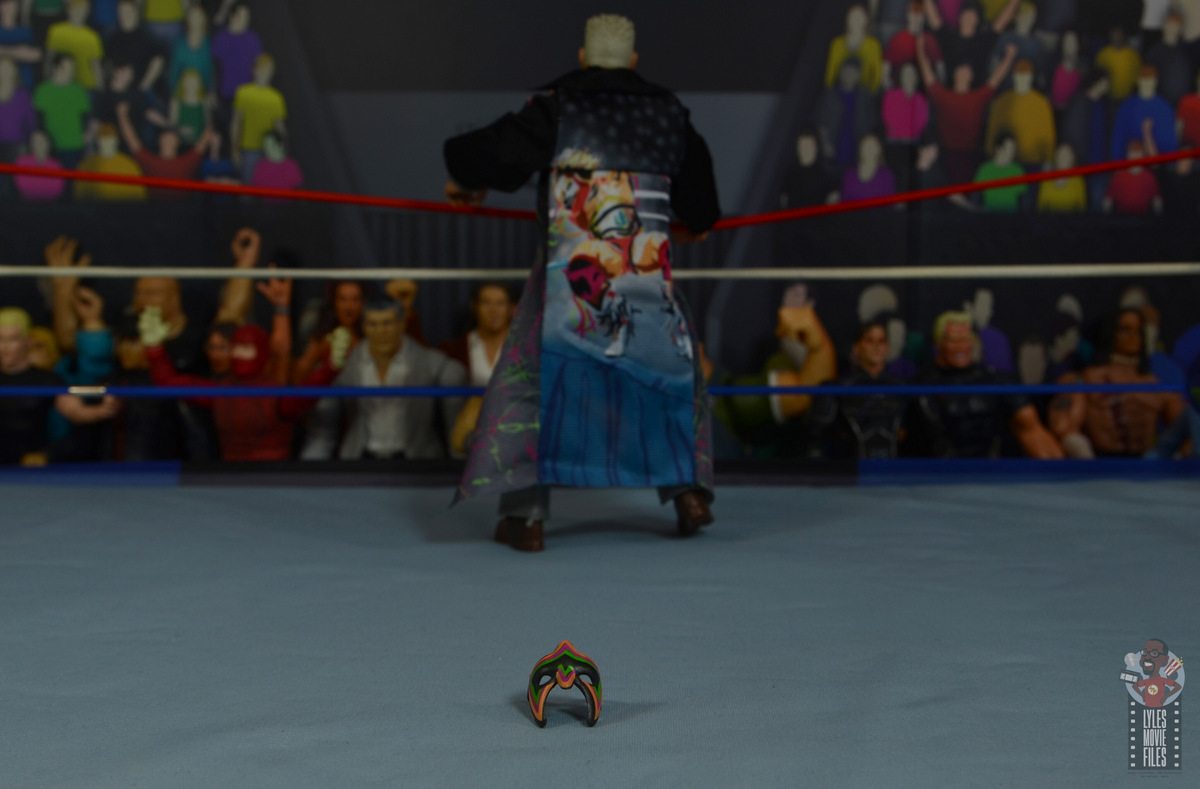 Accessories:  Warrior comes with an Ultimate Warrior mask that WWE was hawking through Wrestlemania weekend to commemorate his induction into the WWE Hall of Fame. The paintjob on the mask is sharp for all four paint levels. 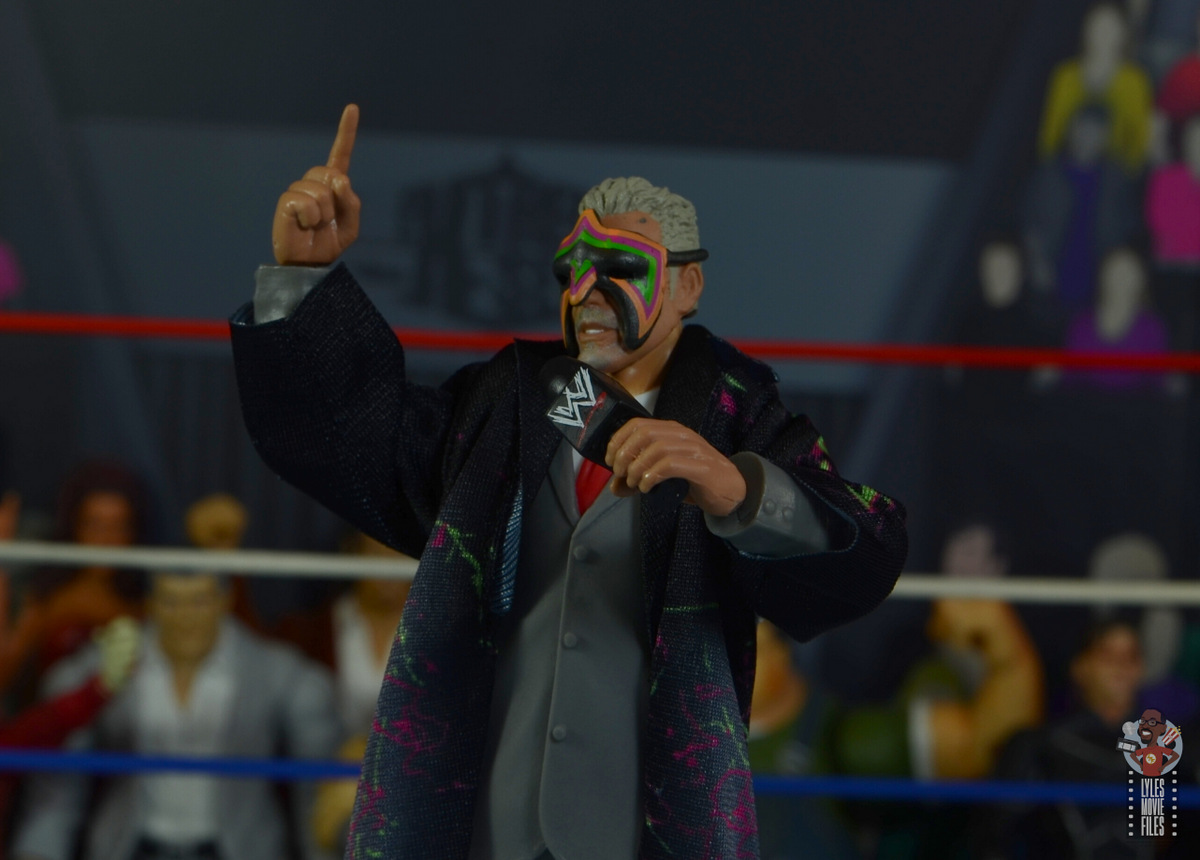 He also comes with two pointing index finger hands. Those are useful swappable pieces and I’m glad Mattel is adding these in for some bonus value for figures. Additionally he comes with a WWE scratch logo microphone that fits easily enough into his hand. 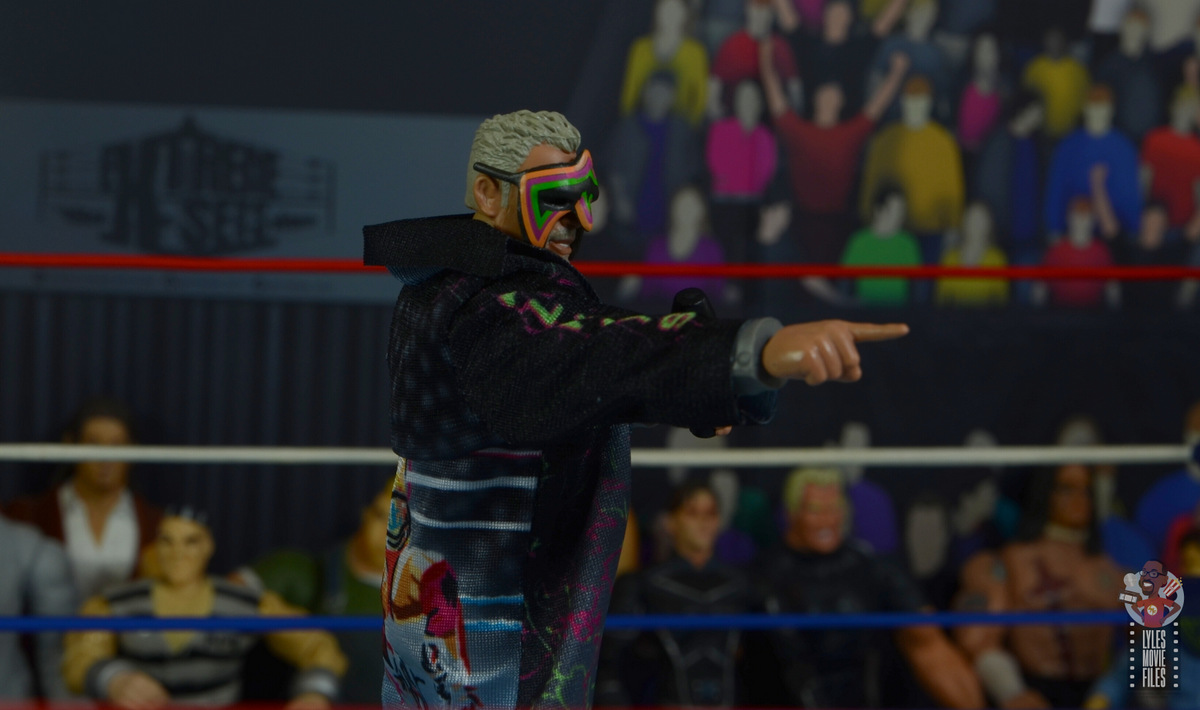 Obviously the big accessory here is his airbrushed duster recalling Ultimate Warrior’s mid-90s run in the WWF. I think Mattel is using a thinner material than earlier cloth pieces, but it works fine in this case as it hangs off the suit body just right. 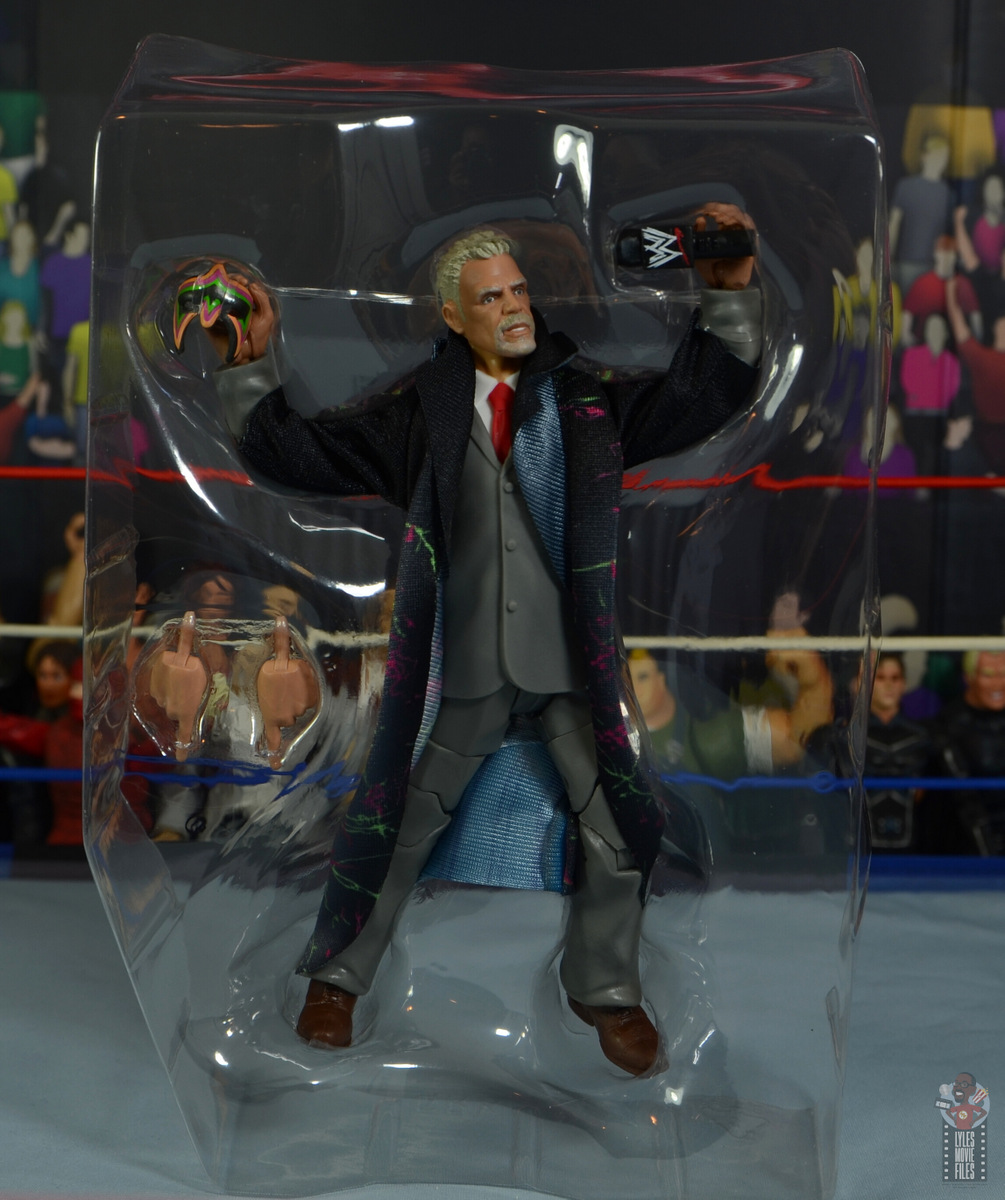 Given the exceptionally high level of detail on the airbrushing it does make me wonder if Mattel could just use this approach with more characters that have jackets that aren’t zipper heavy.

Worth it?  Fortunately I didn’t have to pay more than the standard $30. Figures with swappable ring entrance gear i.e. jackets make this line a better bargain, but Mattel really did try and pack a ton of extras to justify the price tag. Maybe another shirt and hat combo would have helped?

I’m not sure of the market for final appearance figures as that could get morbid real quick, but this is a very classy figure for a character a lot of collectors probably have several variants. Mattel did a really nice job capturing this moment and while it’s not the most complex Ultimate Warrior figure they’ve ever done it certainly holds up for sentimental reasons. 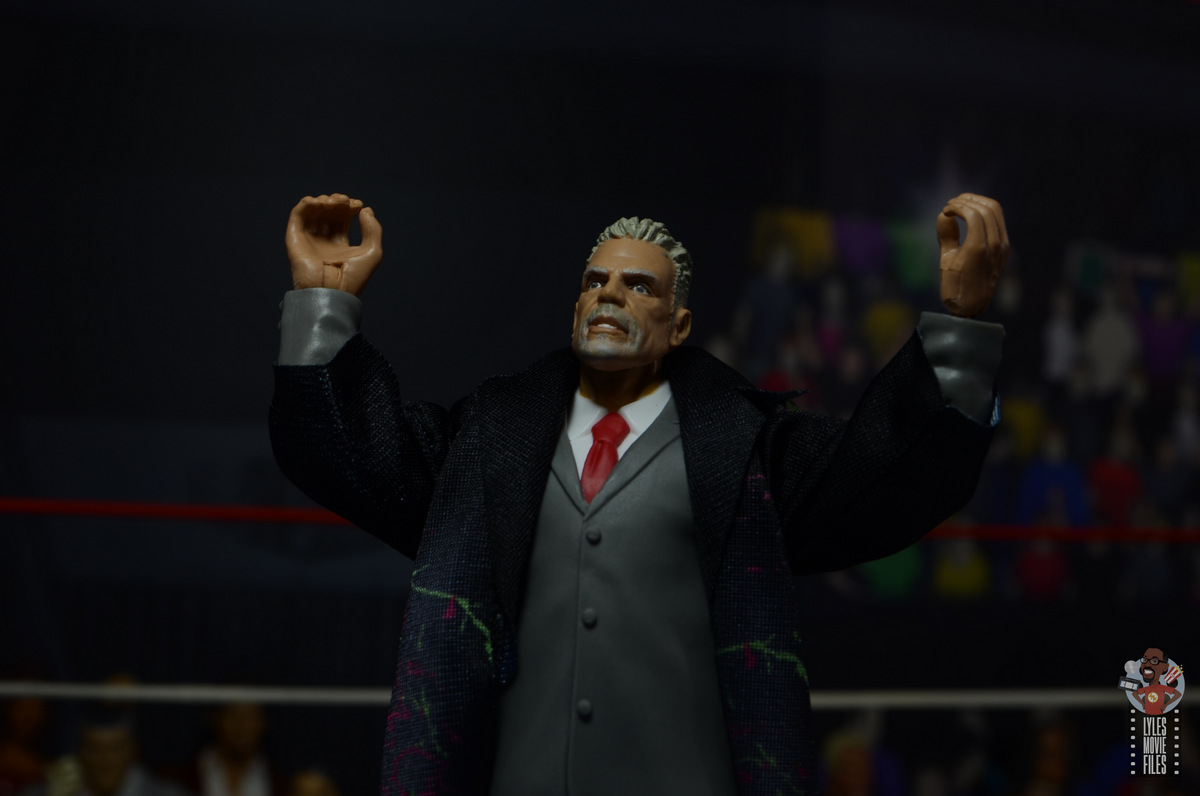 Where to get it?  Legends 8 was up on Target.com for pre-order, but remains sold out despite them being readily available in stores. And as a Target exclusive that’s your main option for getting these figures short of paying a higher price on Amazon.