Thanks to a prominent role in the Marvel Cinematic Universe, Falcon hasn’t lacked for Marvel Legends figures. It has taken Hasbro awhile to get to some more of Falcon’s comic book looks, which is interesting since he’s got some cool costumes that would translate well in the Marvel Legends line.

Ironically this is the first comic book based version of Falcon from Hasbro. I was excited about getting this one even if it’s not my preferred version. Let’s see how this figure flies.

Packaging:  Hope you weren’t expecting anything new here. This Avengers theme wave features the red accent on the black packaging. I appreciate that Hasbro uses one artist per wave for the side panels. Falcon’s drawing is solid. His bio felt underwhelming with a quick synopsis and no mention of his Avengers membership. 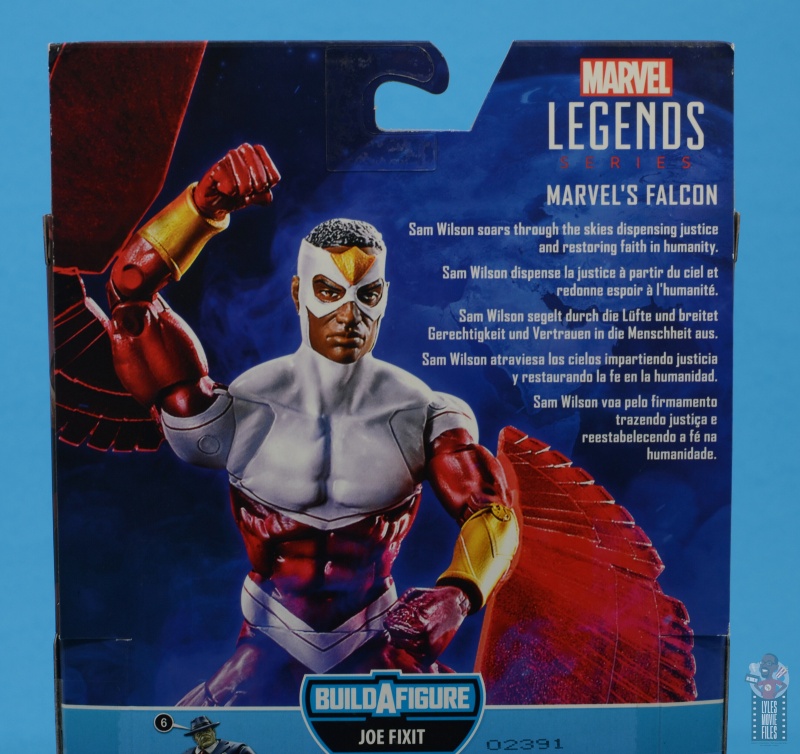 Likeness:  Falcon is sporting one of his more modern outfits that was also featured in the Avengers Assemble cartoon. He’s had a ton of costumes over the years with some variation of how much skin he’s showing from his chest to his arms.

This one of Falcon’s more modest outfits and honestly it’s a fine choice even if I still want the classic early red and white costume in ML form. Toy Biz’s version of that was lackluster back in the day with the huge ball shoulders and annoying red neck peg. 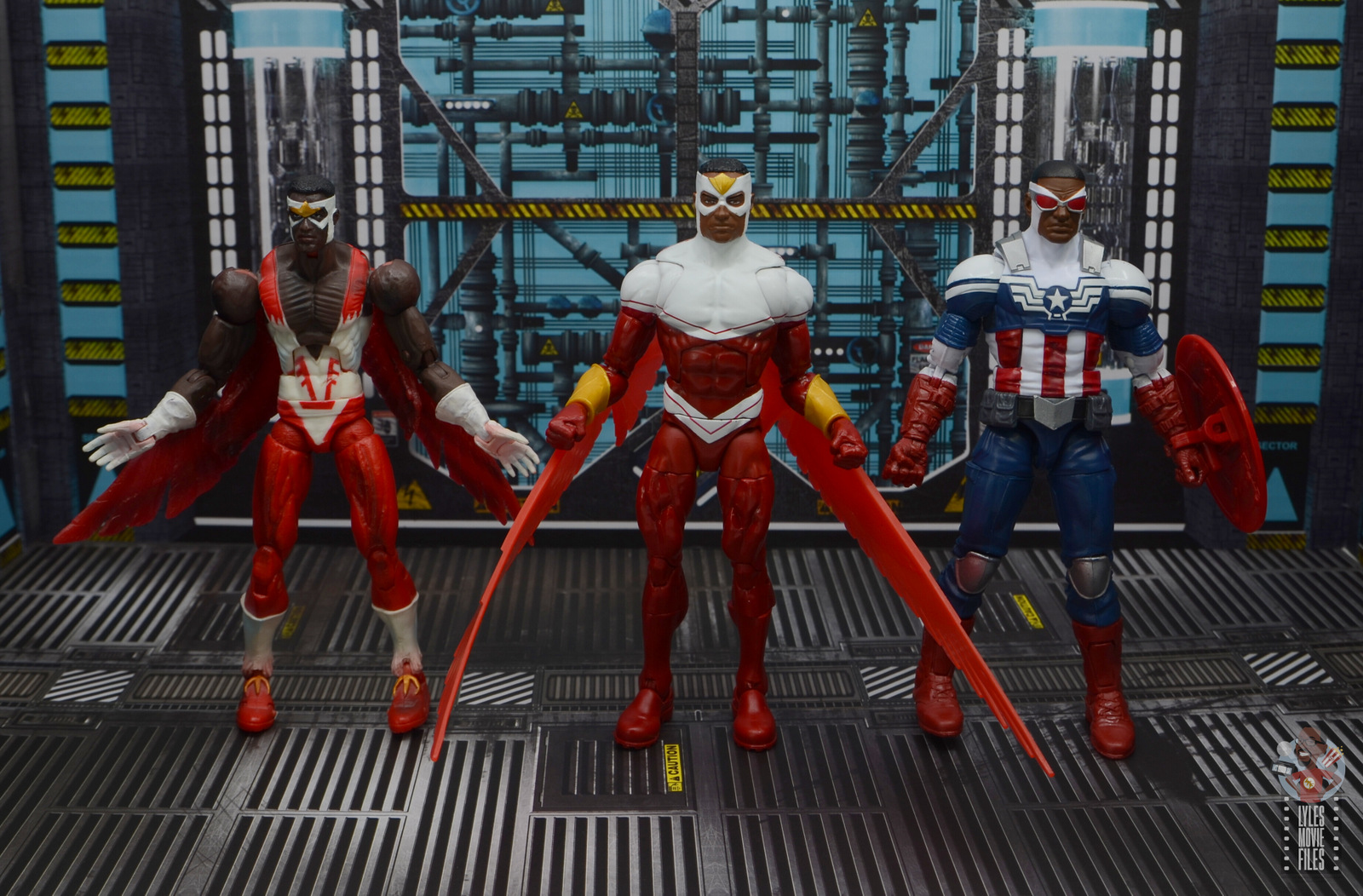 Besides the gold gauntlets there’s not a lot of sculpted elements past the head sculpt. Hasbro did a nice job here with a firm expression with the confidence of a guy who was trained to fight by Captain America. The mask outline and crest both turned out sharp. 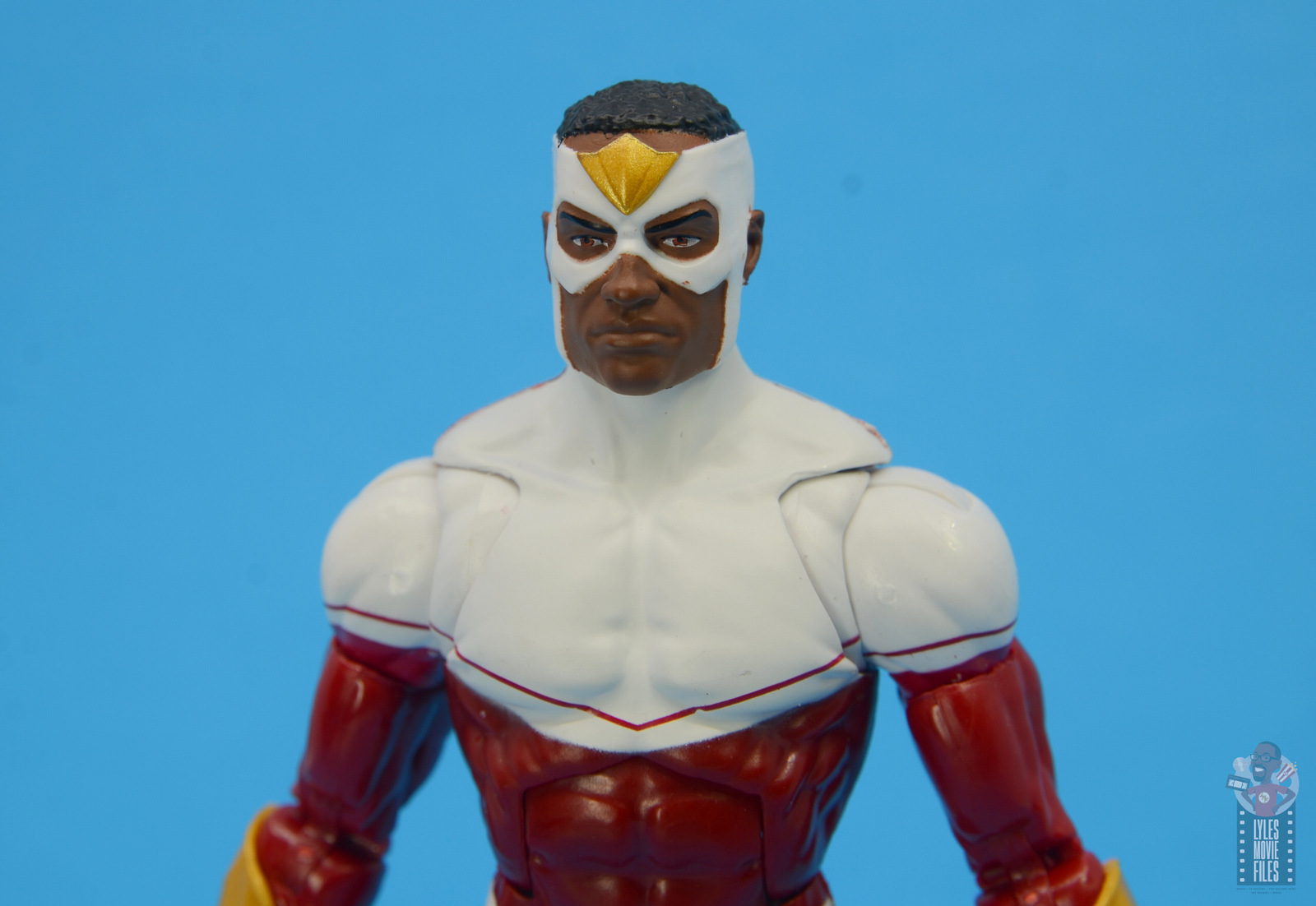 Less obvious, but just as appreciated is the great work on the texturing of Falcon’s hair. It’s well done and shows the difference in his hair compared to say Steve Rogers.

Paint:  The helpful aspect of sculpting details like masks is it tends to make painting sharper areas easier. There’s a downside to that in the angles creates multiple areas to ensure gets the right paint applications. 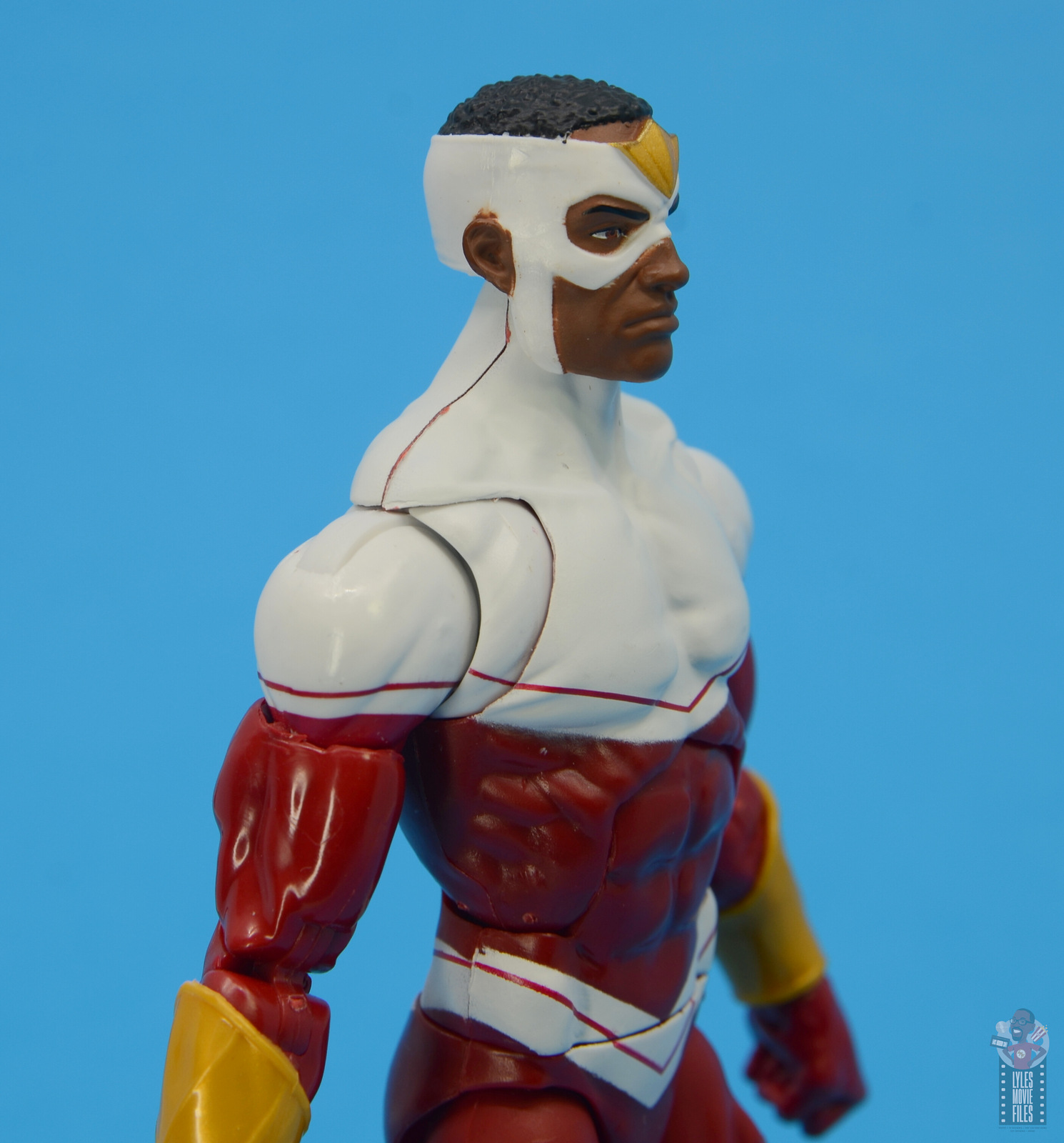 Falcon’s mask area is a little rough with brown on white areas and white on brown areas. Some portions require a close up look though and from a distance it’s not that obvious.

The rest of the outfit is just some thin red stripes breaking up the white areas on the torso, shoulders and waist. No problems there and all the line work matches up smoothly for the most part.

I did have some issues with the mold flash at the shoulders where the red inner portion peeks out a little. 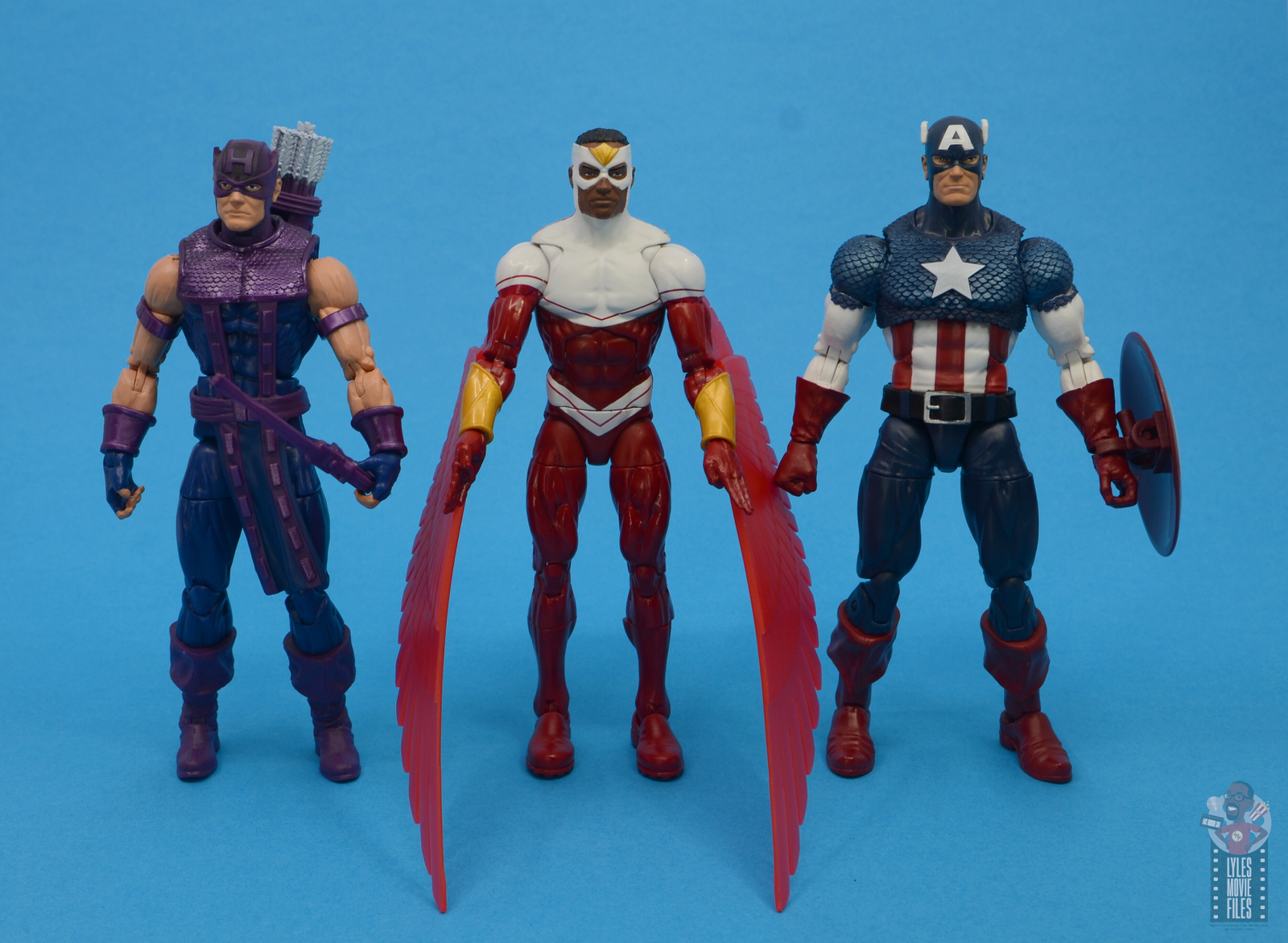 Scale:  Falcon uses the Sunfire mold, which is a great choice for his build and size next to Captain America and Hawkeye. 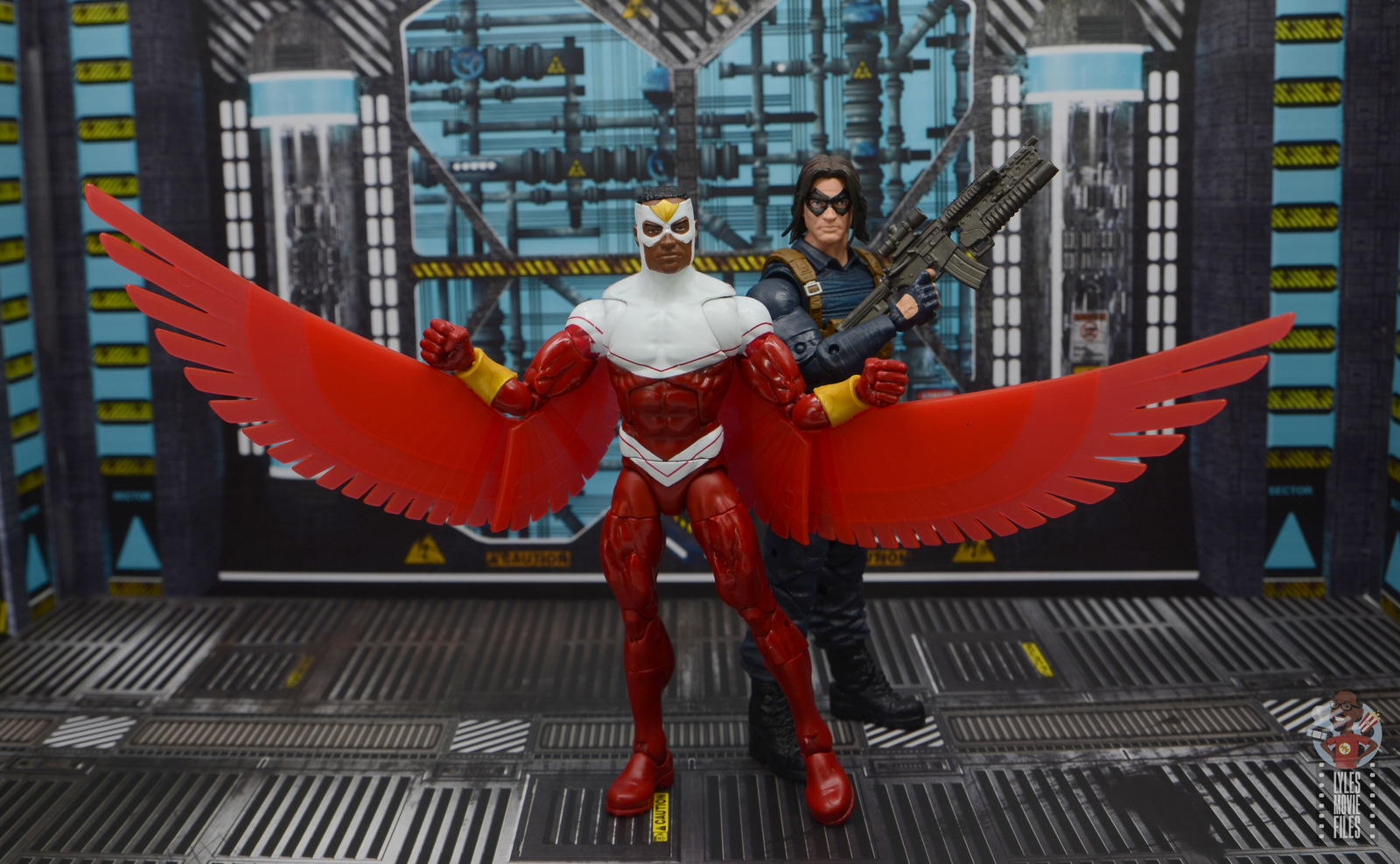 Articulation:  The Sunfire mold has been great for slender characters geared toward flying and energy projection. There’s not much you can’t pull off with Falcon and his neck range is better than average for looking ahead flying poses. 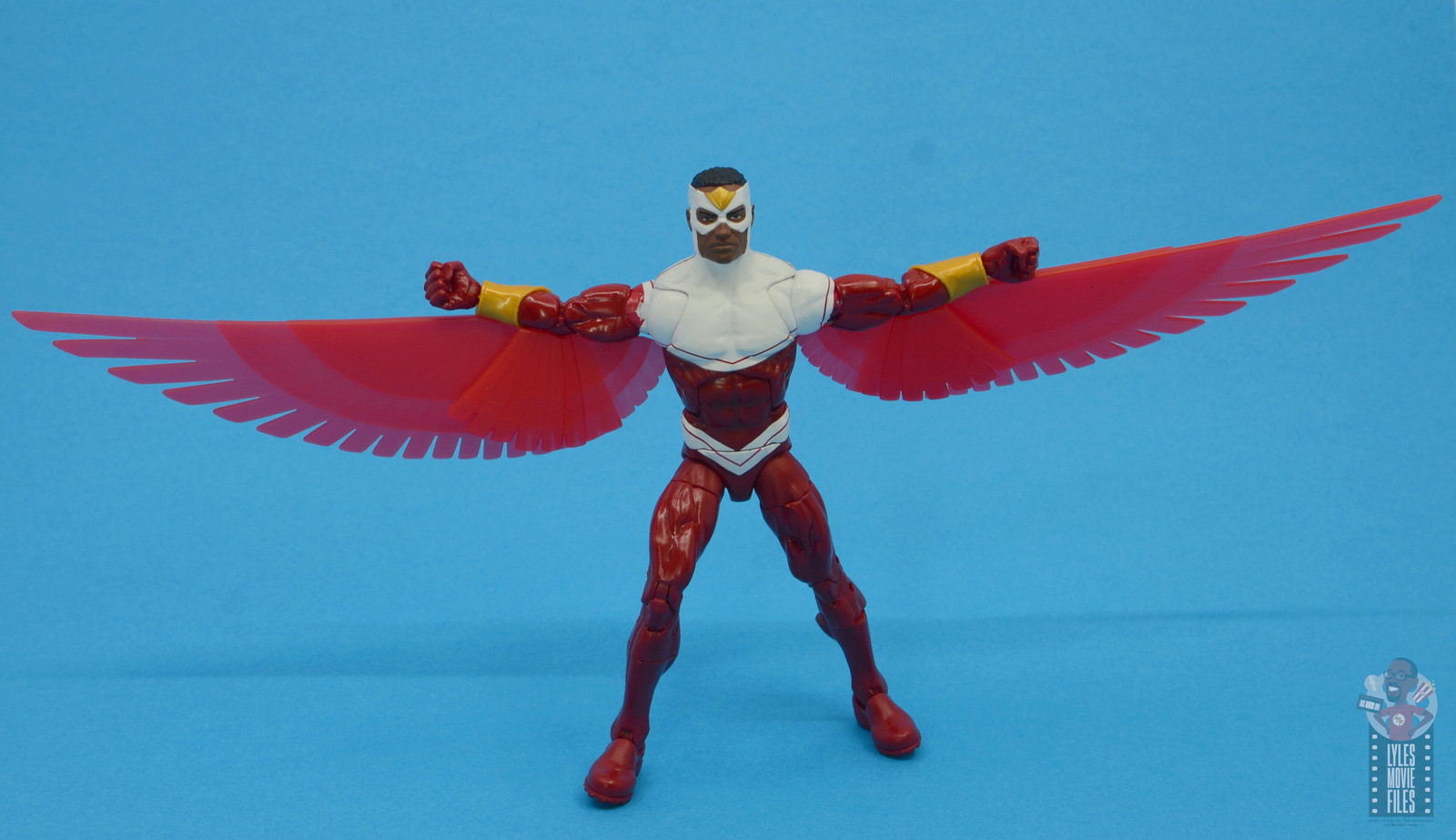 Everything else is traditional ML articulation and the wings can fold in enough that he’s not a space hog and can stand in a display. 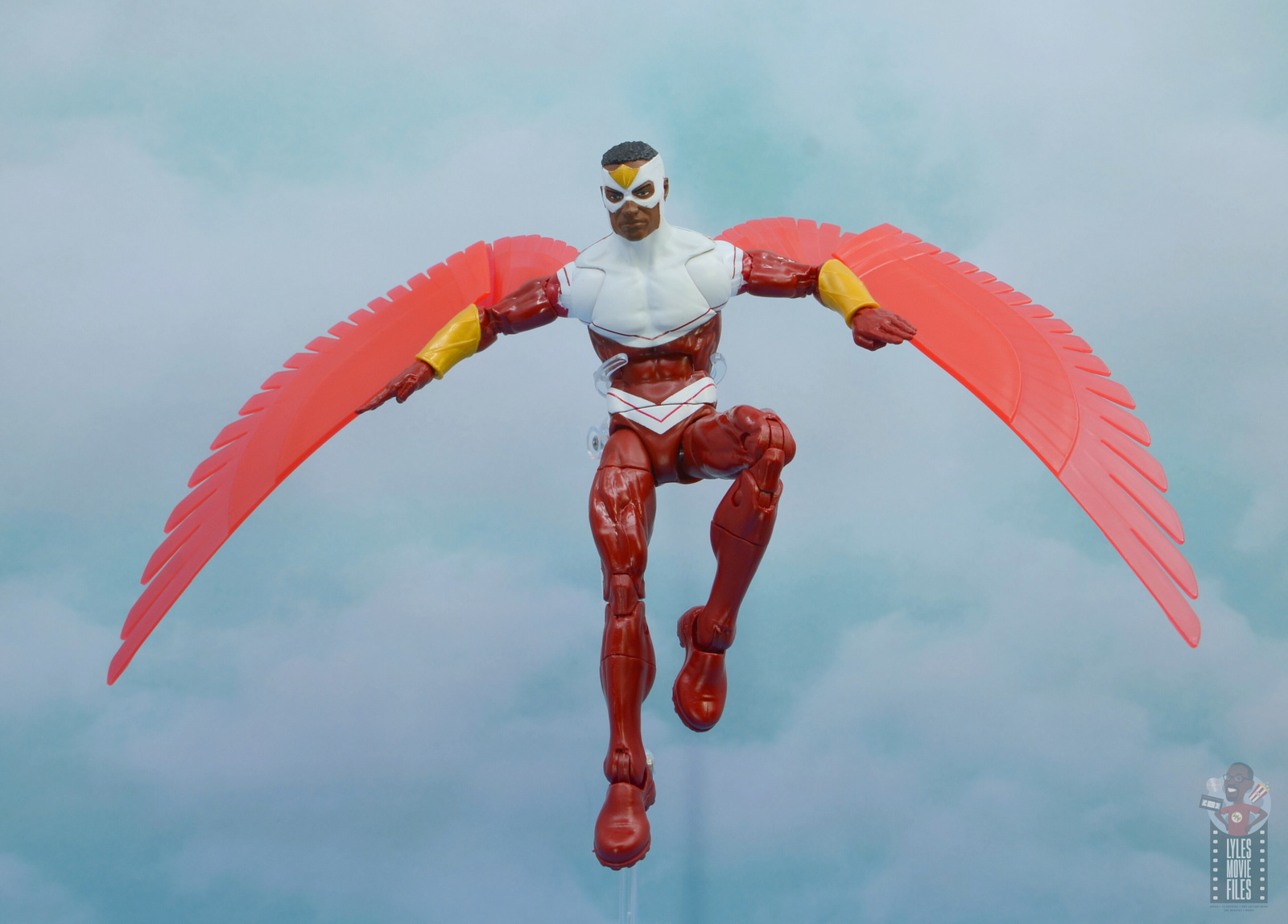 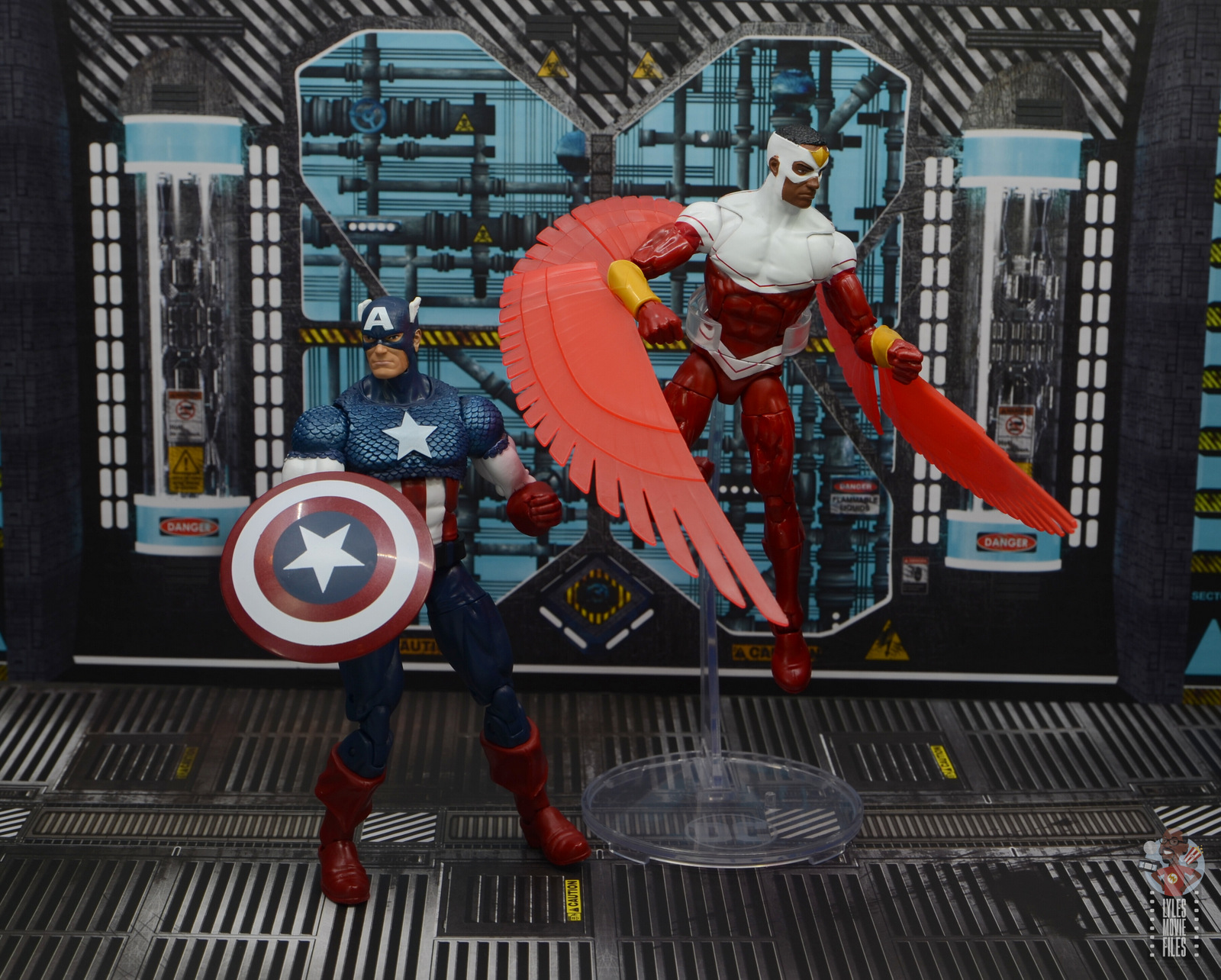 Accessories:  Falcon doesn’t need anything more than his pal Redwing and his red wings. One out of two isn’t bad? But since Hasbro is so thoughtful, the Redwing from the Toy Biz Falcon can actually plug into the hole. Now that’s some cool foresight. 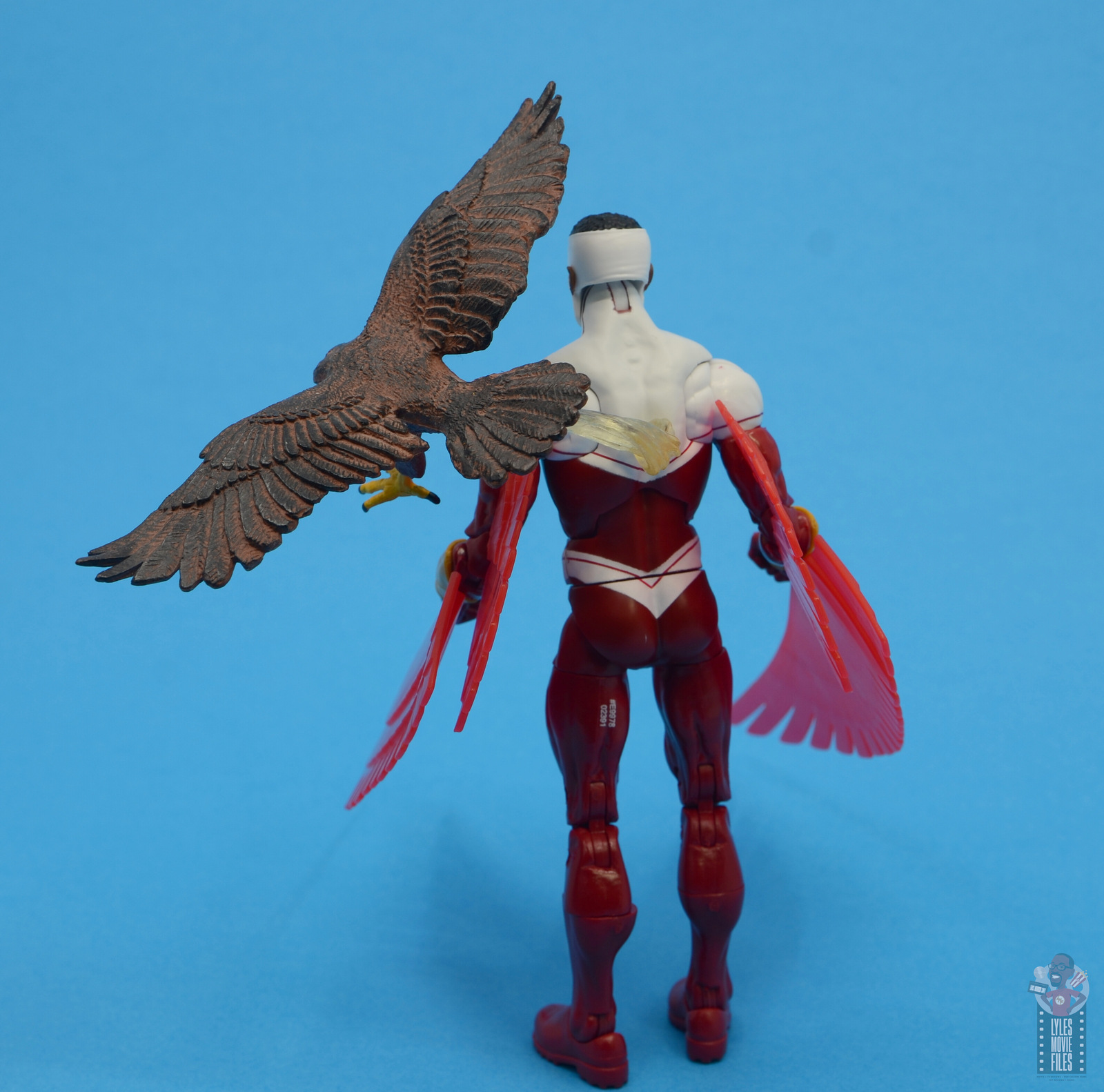 Falcon’s wings are included. They’re a reuse of the wings from the recent Vulture. Fortunately these stay on when you do more than look at them unlike Vulture’s shaky wings. 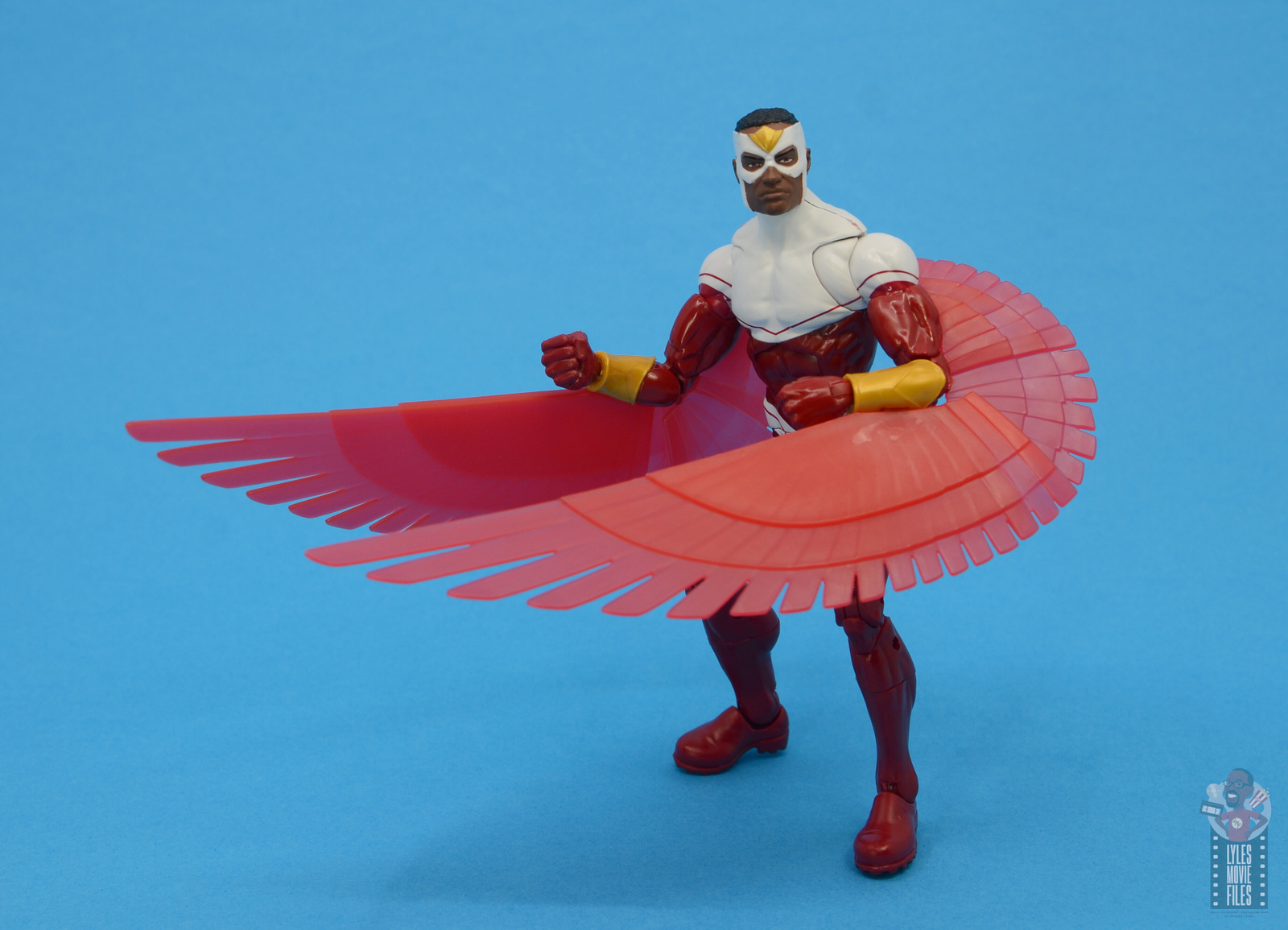 I thought in this attire the wings were part of the outfit and not energy effects. Falcon’s switched that up enough I won’t complain about Hasbro going the more translucent route.

He also has some flat palms ideal for flight poses. 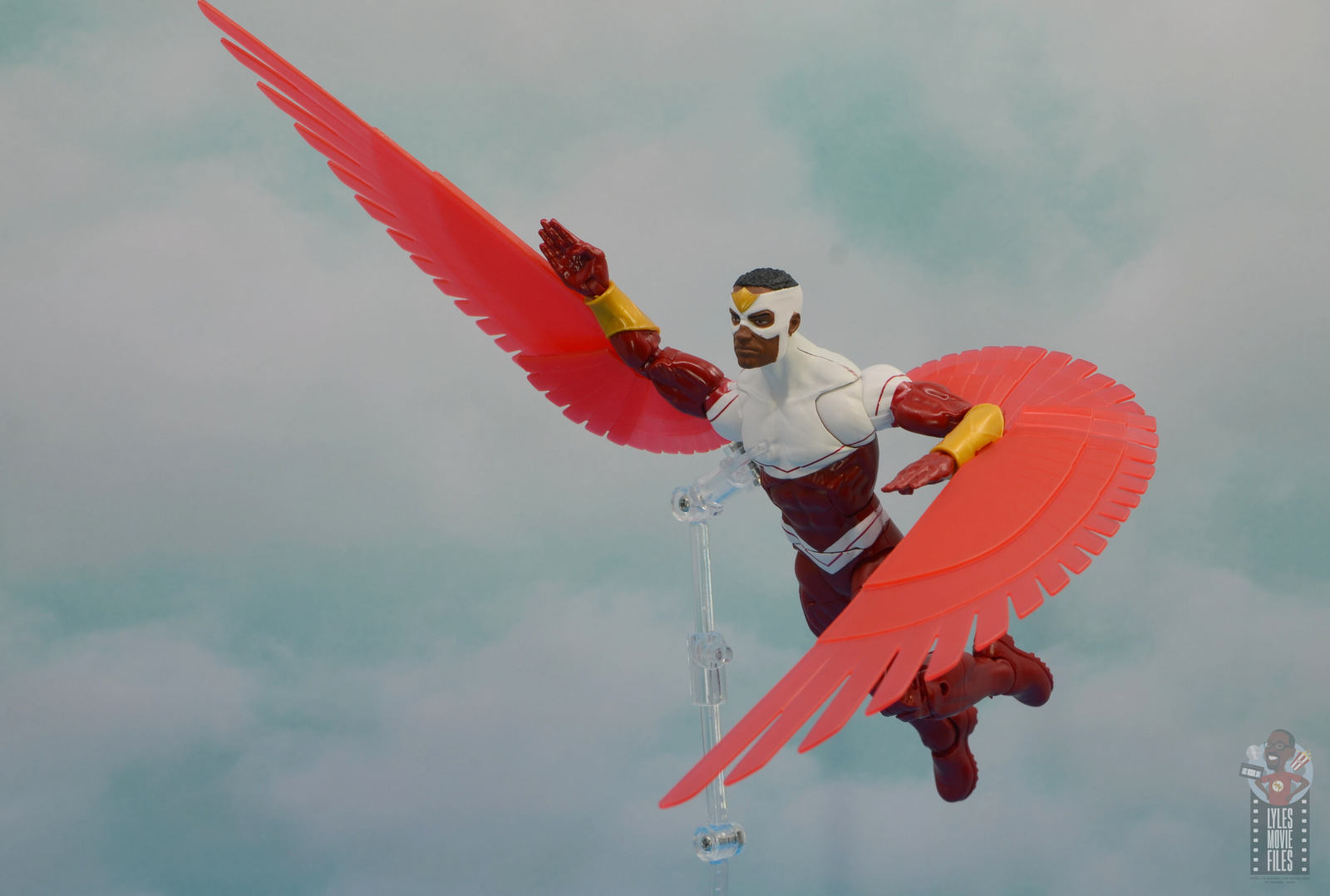 Finally, he’s got the left leg for the Build-A-Figure Joe Fixit. I wasn’t interested in him at first, but now since I only need the arms, the BAF format might get me again. 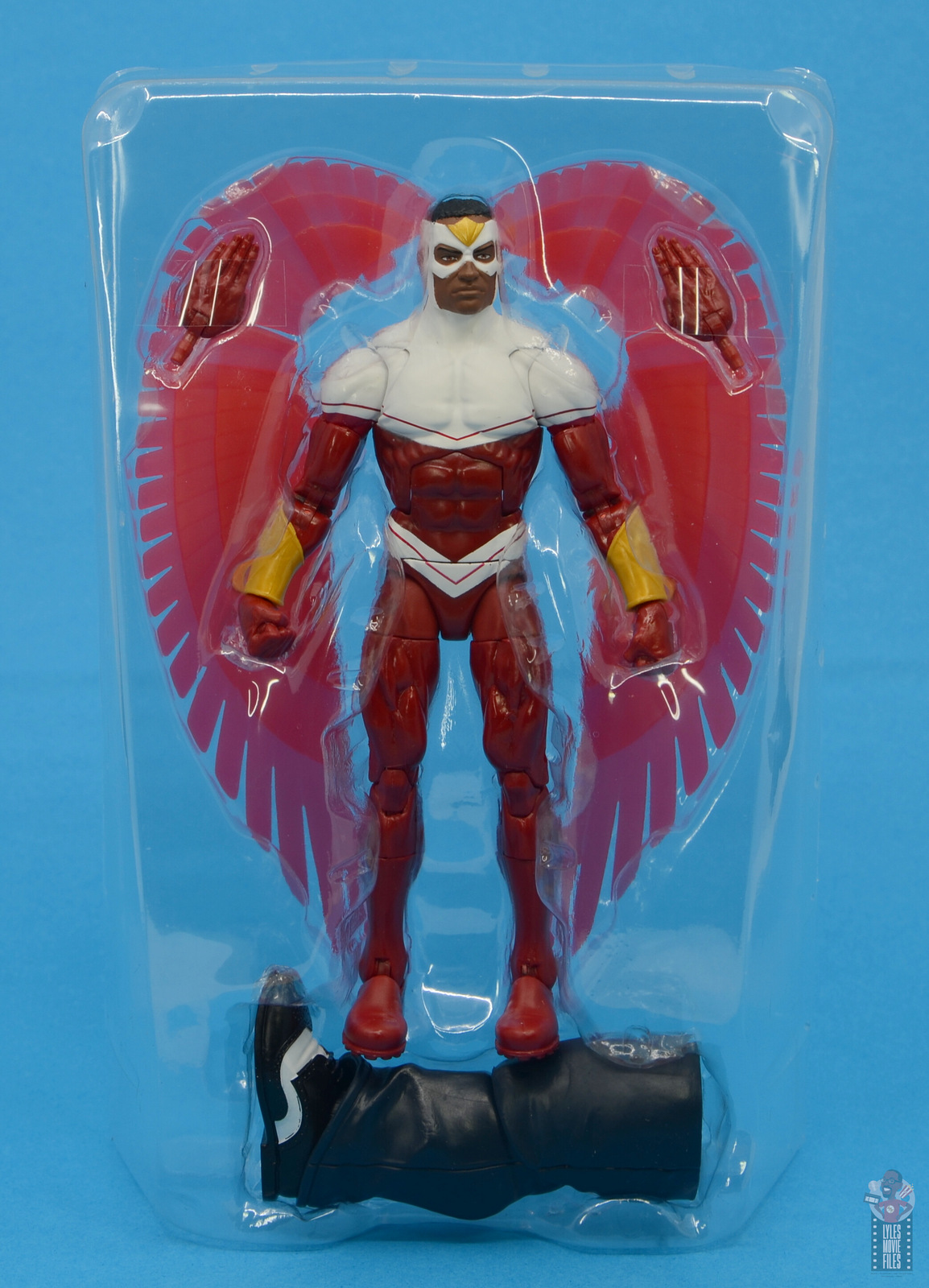 Worth it?  Falcon was the regular $20 price tag. The value is still perfectly reasonable with this line. Falcon could end up discounted later on however. 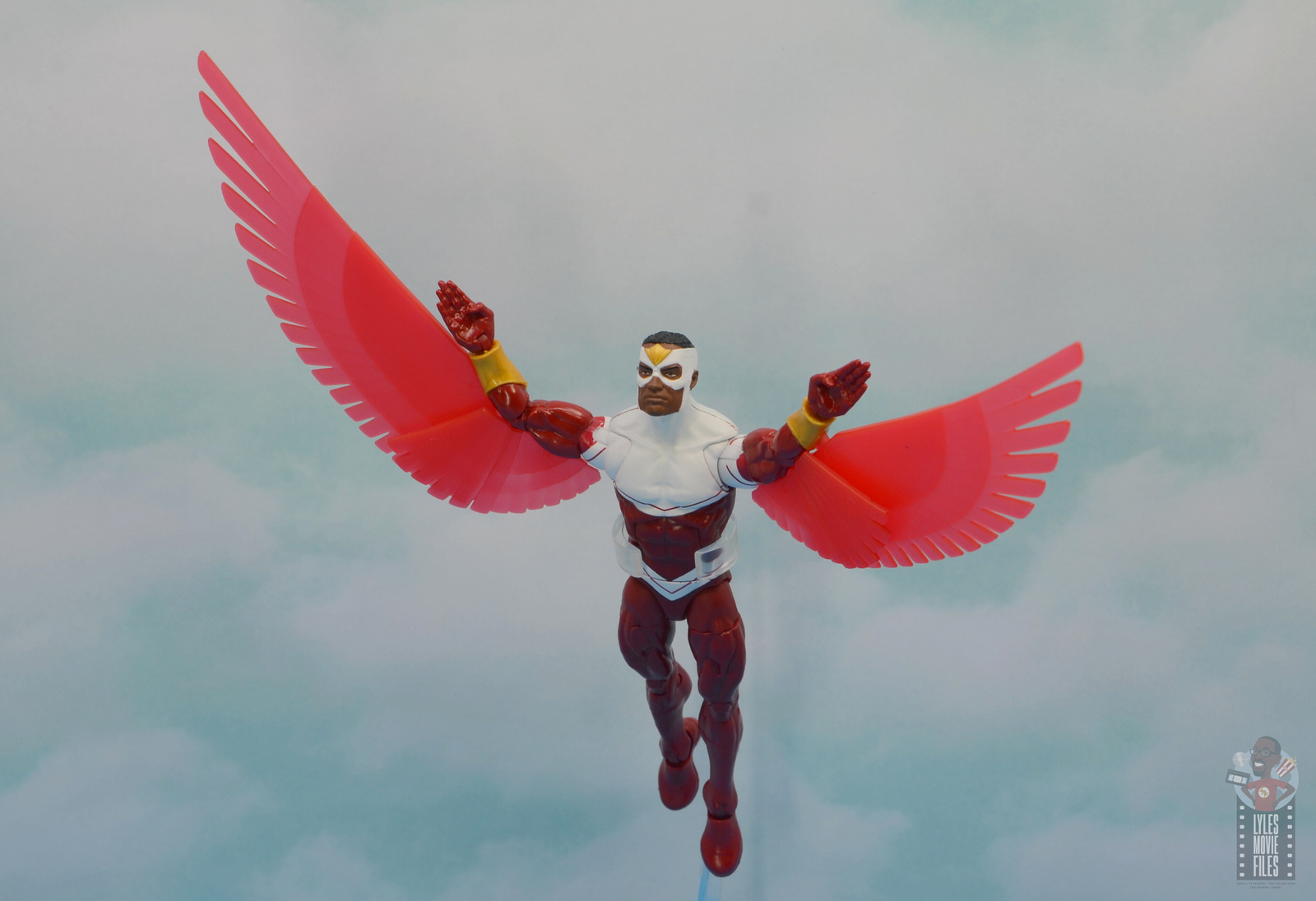 This isn’t my first Falcon comic costume choice, but the figured turned out very nicely and makes for an overdue addition to my comic Avengers shelf. 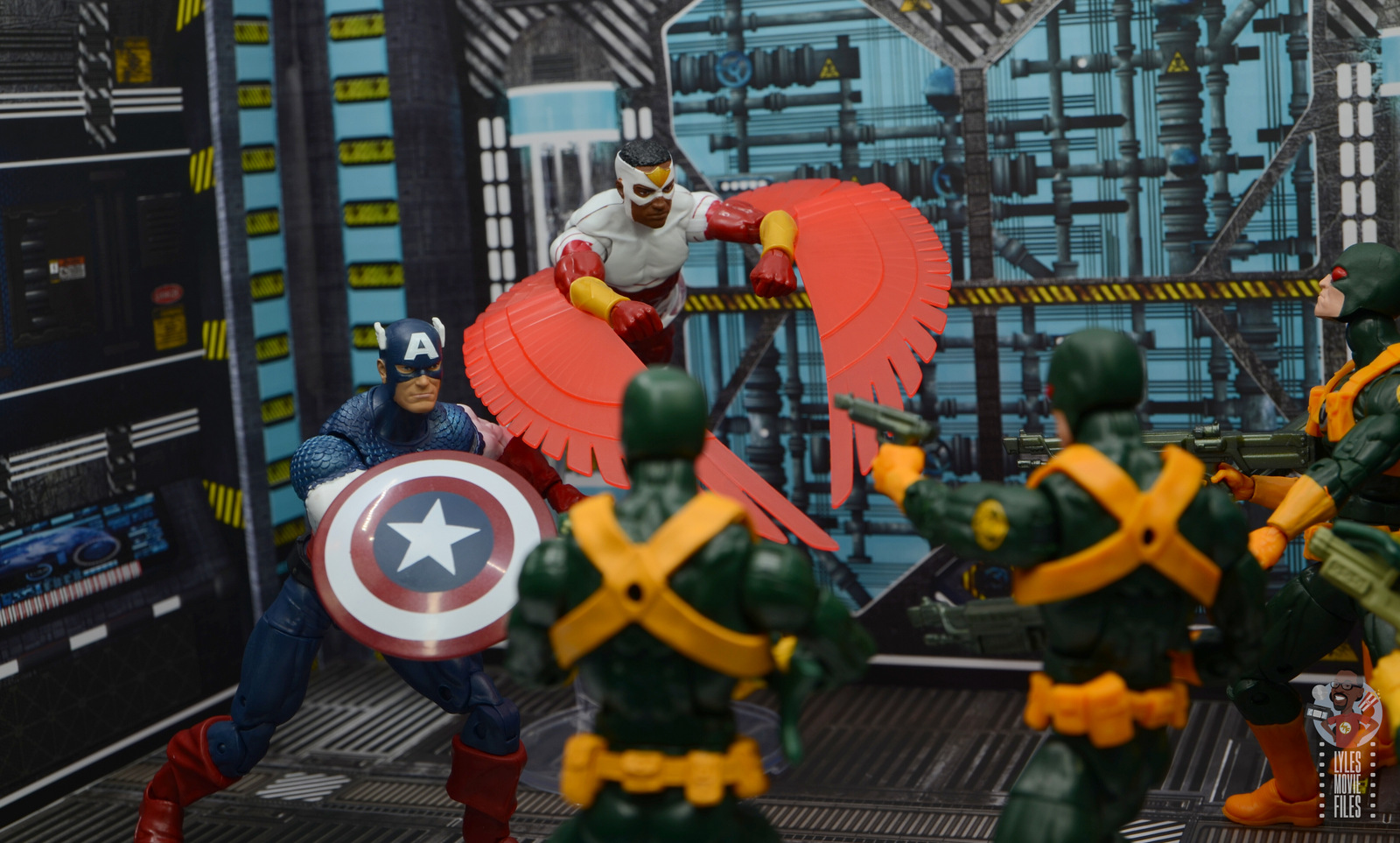 Where to get it?  I’ve seen the remnants on shelves at Target, but you can still get him online from Amazon and GameStop as well.  You can also get him on pre-order from Entertainment Earth.