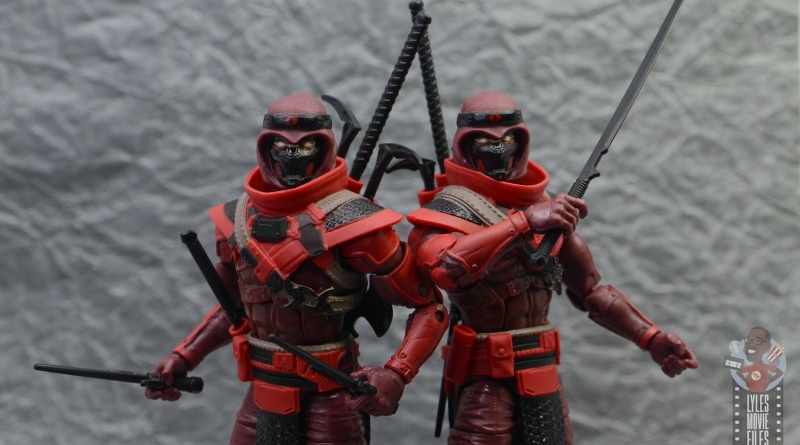 I wasn’t thrilled when the G.I. Joe comic series started going super ninja heavy, but there’s no denying the importance of their role in the overall mythos. They’re best suited as Cobra specialists after Storm Shadow joined up with Snake Eyes and the Joes.

It wasn’t too surprising then that Hasbro opted to quickly add some Red Ninjas to the Classified Series. I waited until I had at least a pair because just one doesn’t make a lot of sense to showcase.

Package:  You know the drill by now. The red accent colors for Cobra is a nice touch and help show off the multitude of weapons.

The bio as always is very cool: Red Ninja Vipers are ruthless mercenaries who work strictly for Cobra Commander. They hail from the most feared ninja warrior clans on the planet, fighting with the skill of the masters and earn top dollar for their services.

Red Ninjas rank 1 in foot soldiers and 2 in bladed weapons, martial arts and ninjitsu. That doesn’t really sound like a master to me, but whatever. 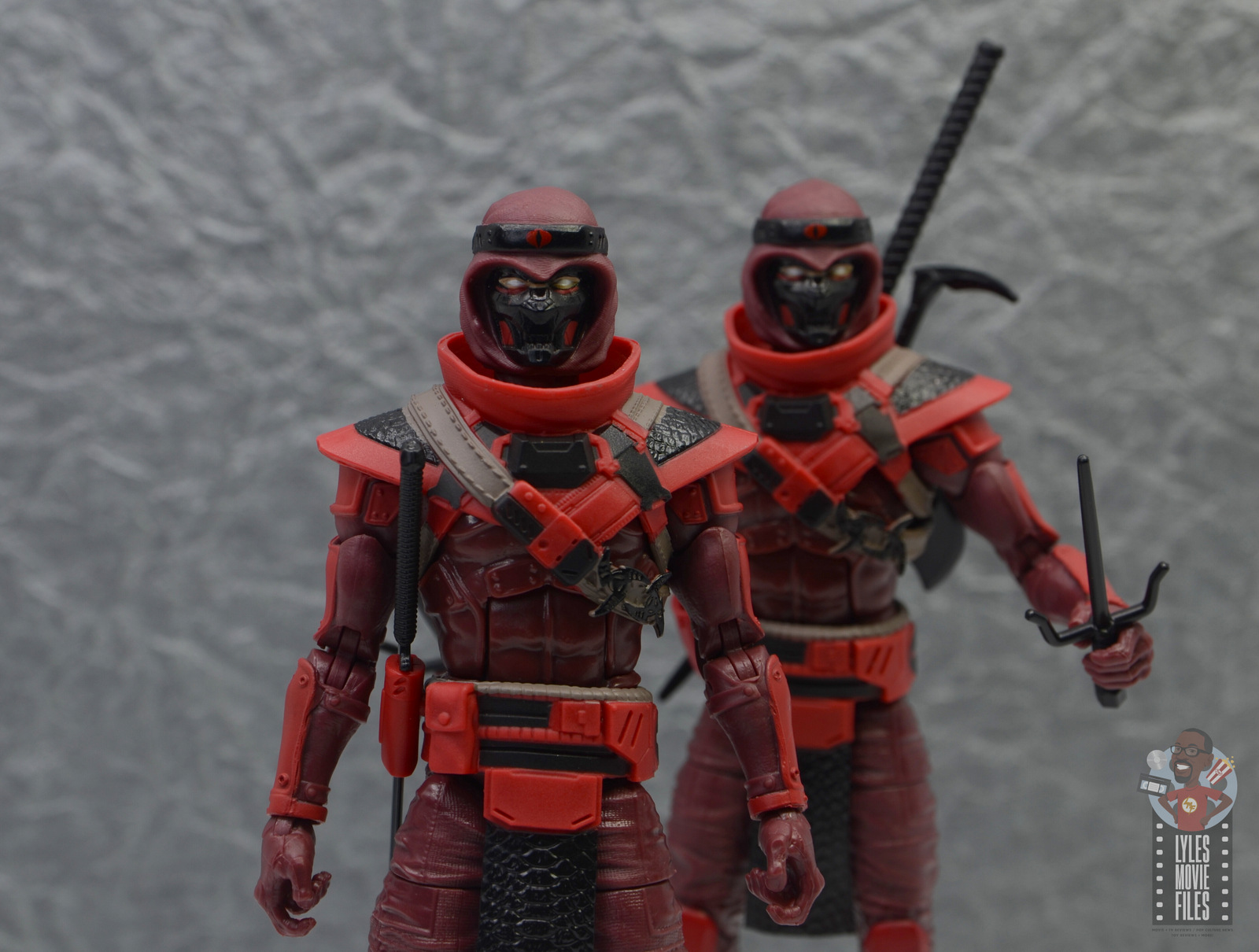 Likeness: The Red Ninjas have a very elaborate costume and the sculpting is amazing. I love the head sculpt, which channels the Night Creeper style with the slight hood. The mask looks very sinister. 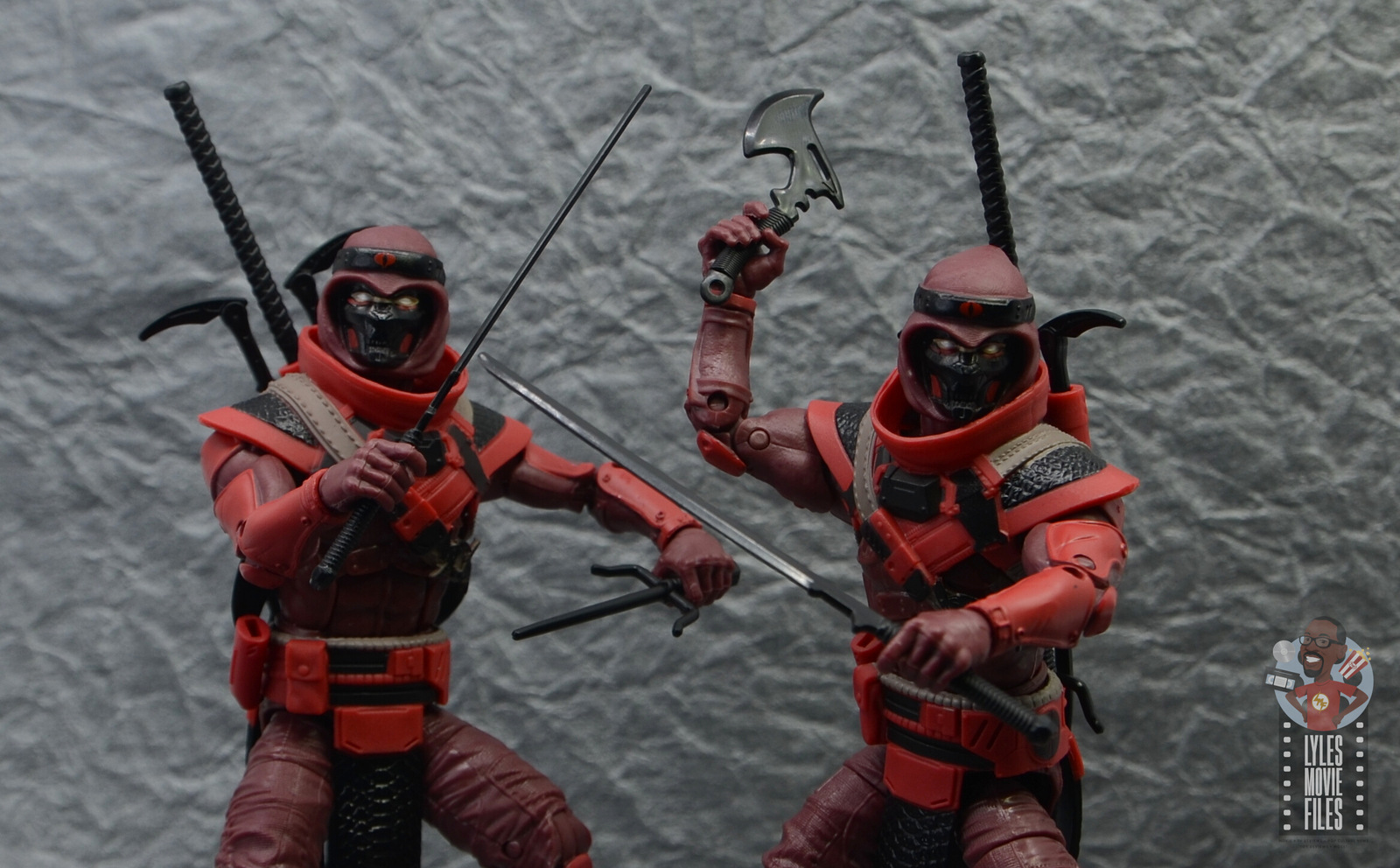 I dig the high collar and layers of the shoulder pads, straps and inner armor. Snake Eyes was the base body and as Hasbro continually proves with this line, with smart reuse figures sharing parts can look completely different. 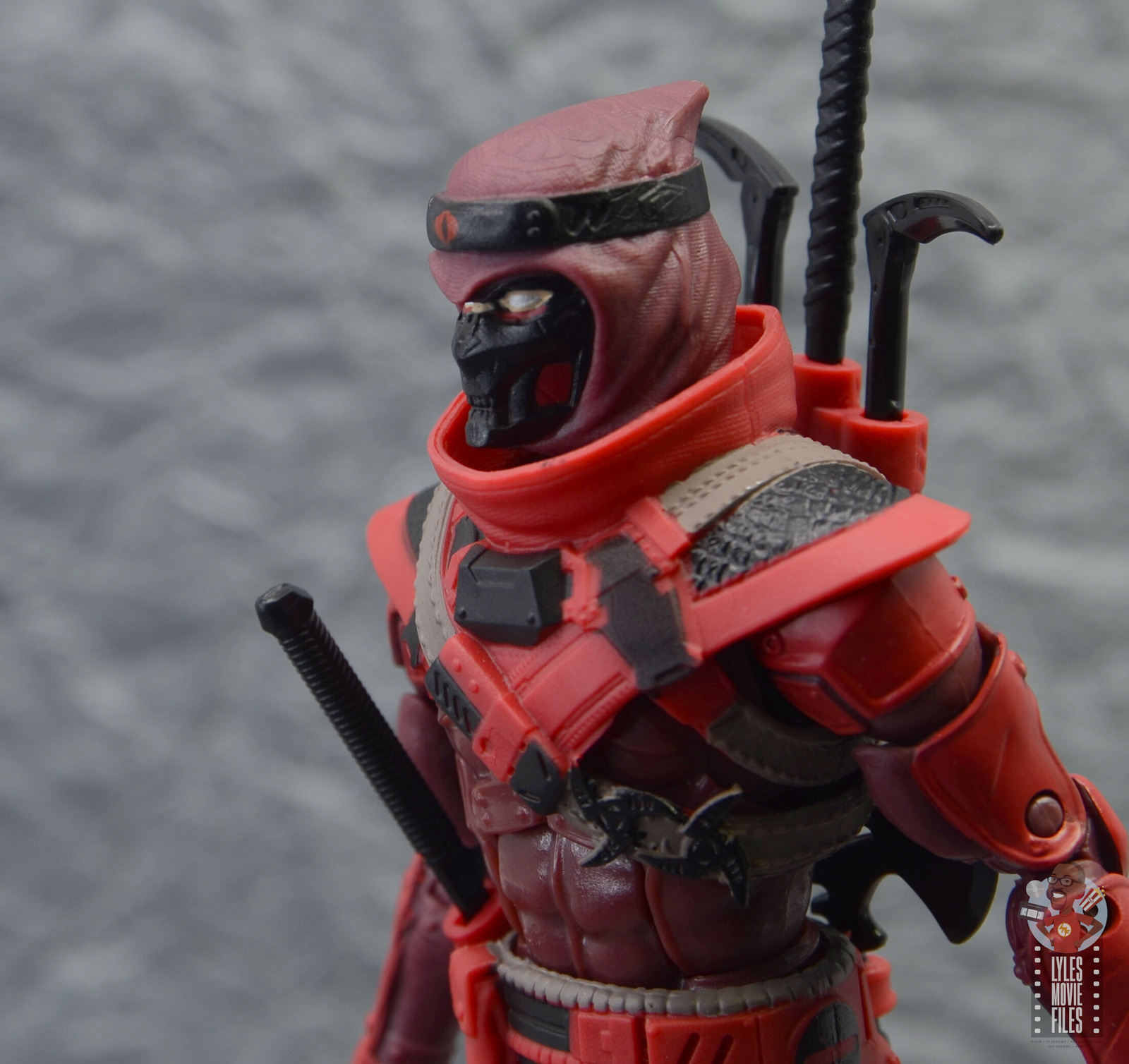 Red Ninja has a new belt with a sheathe to the right side and a front skirt piece.

Paint:  Rather than just one consistent red throughout Hasbro opted to go with a two-tone shade of red. The darker, brick red is the one for the main outfit while the lighter red used primarily for the armored sections and the belt.

There’s other accent work with black, grey and a little silver are mostly very well done. The throwing star on the chest strap could be a bit sharper, but otherwise it’s fine. 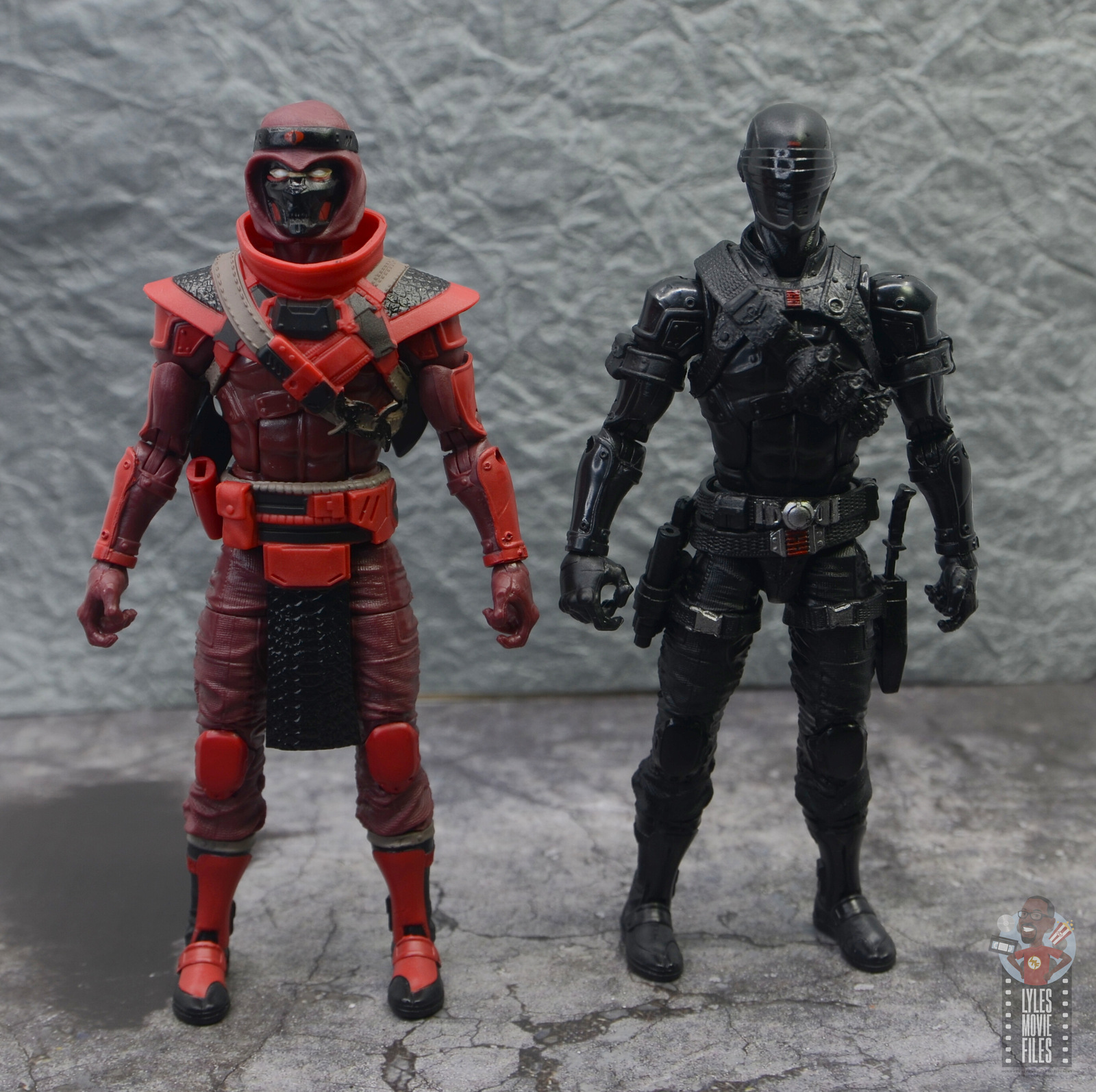 Scale: With the Snake Eyes base body, Red Ninja is the shorter of the male characters. 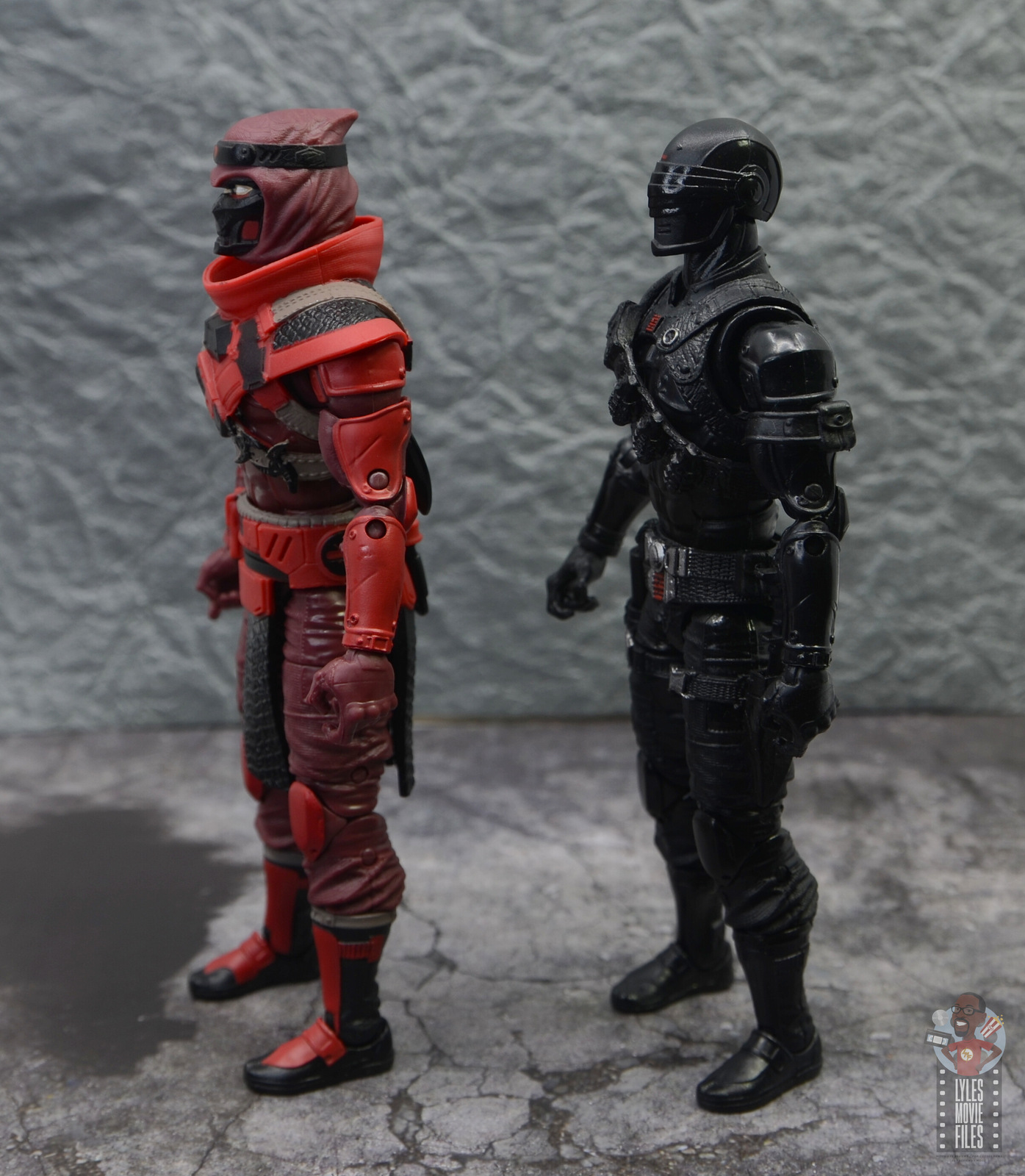 Articulation: The shoulder pads aren’t as restrictive as I would have thought allowing the Red Ninja to be a real menace to the Joes.  The Snake Eyes mold is great for pulling off ninja poses and Hasbro fixed the Snake Eyes issue with the looser torso. 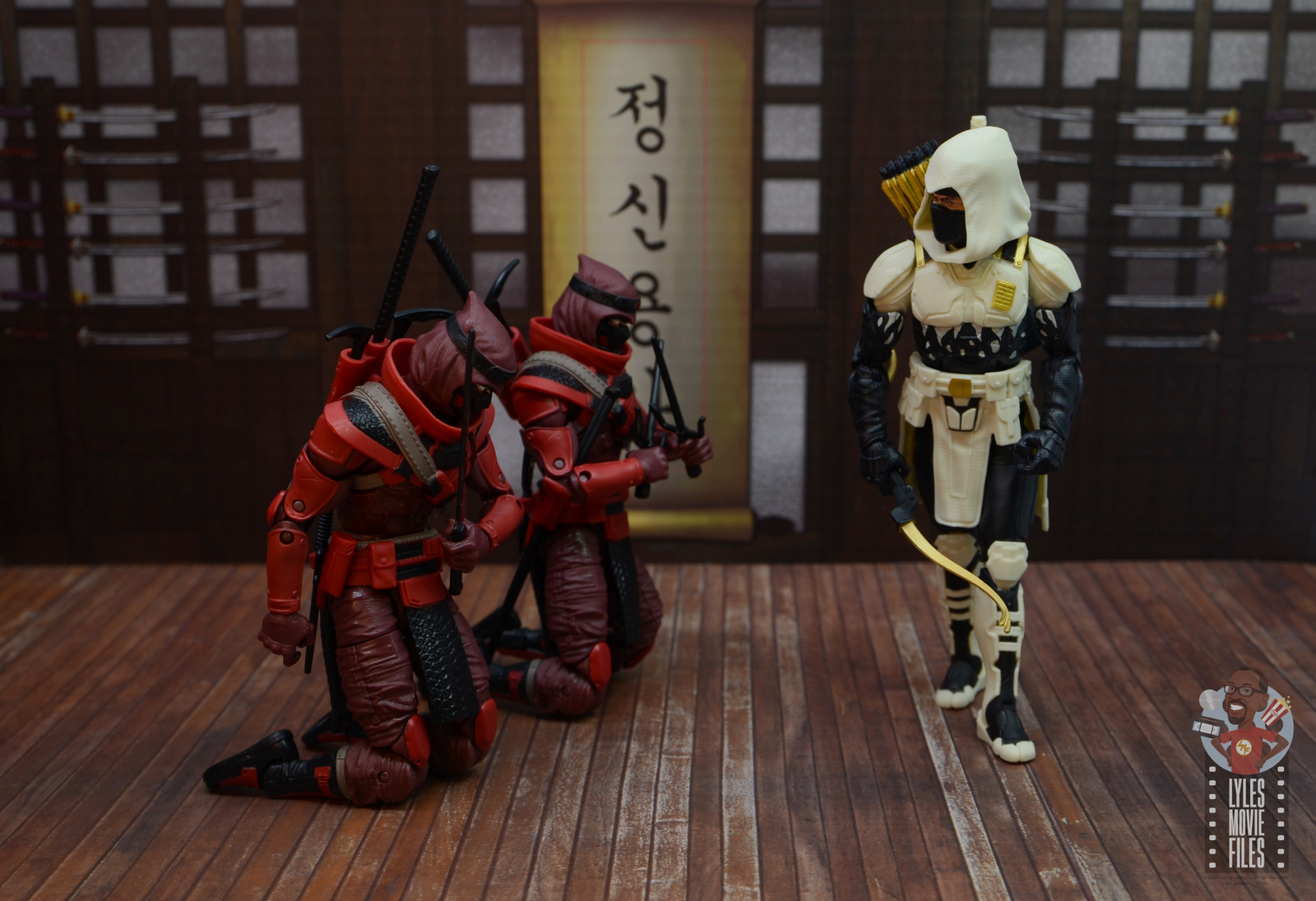 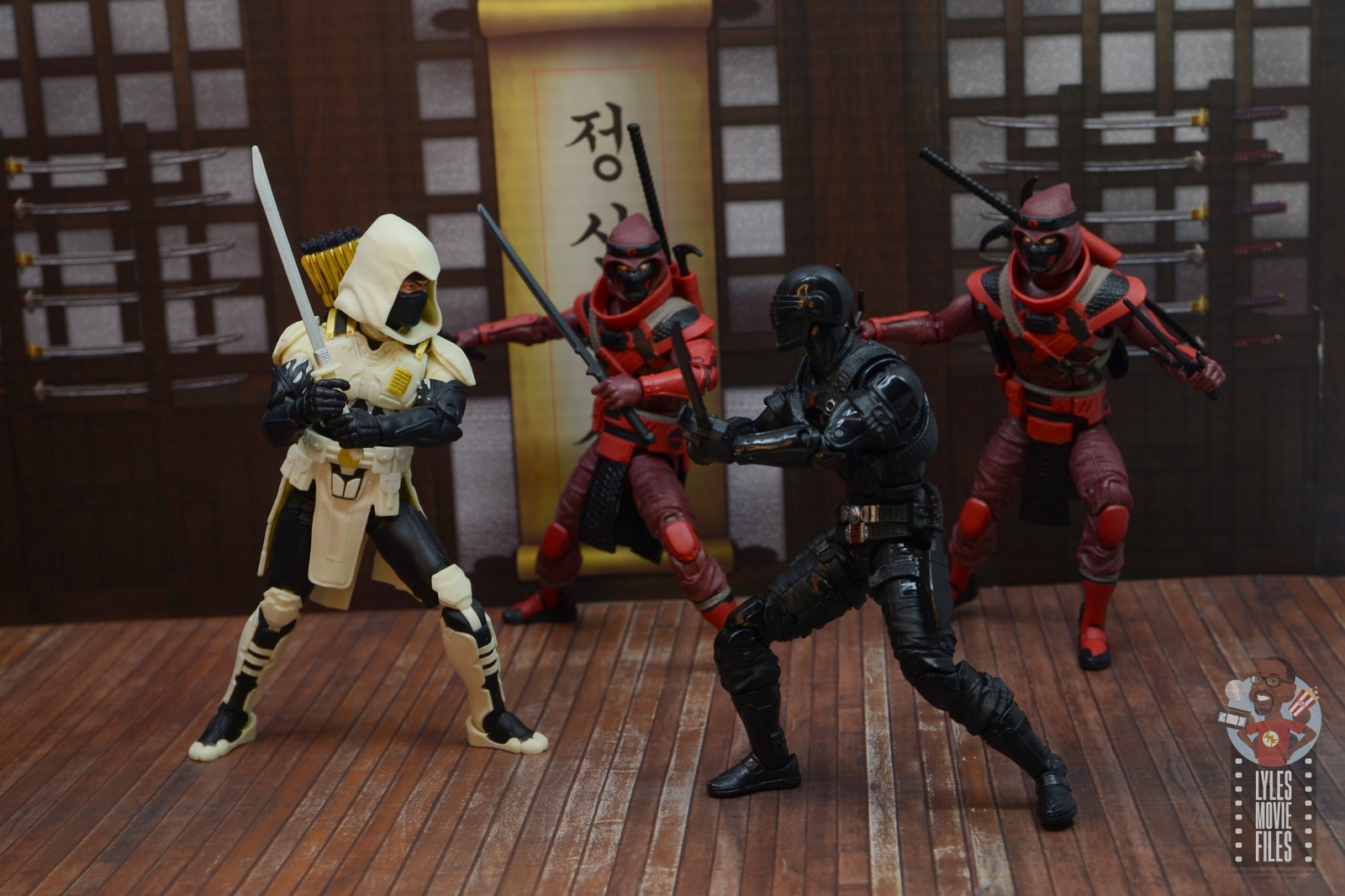 Accessories: The Red Ninjas are fully loaded with accessories that’s very helpful for army builders that want to make their various ninjas look a little different with the weapon combinations. 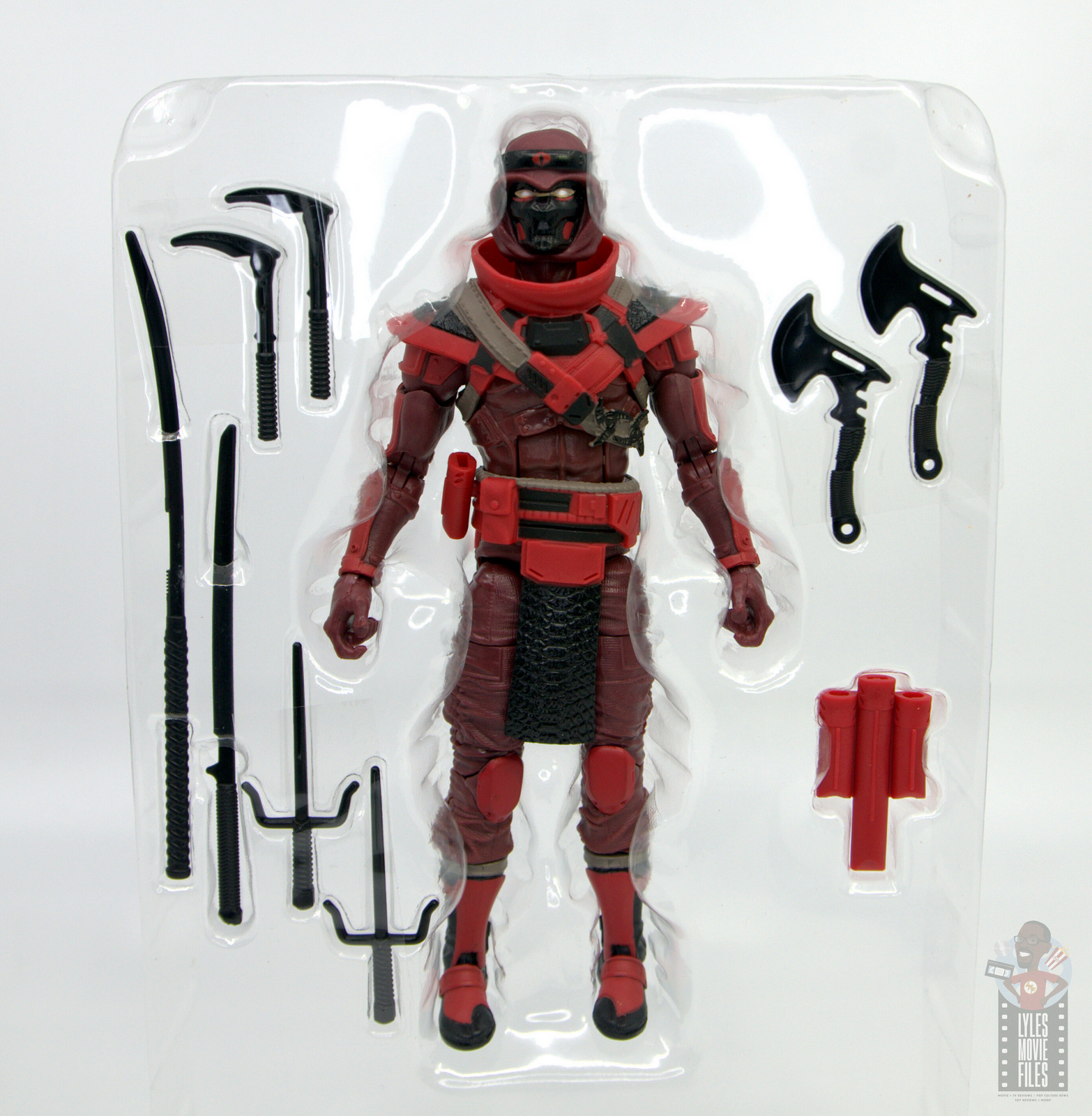 First there’s a long sword with a curved blade. Another medium length sword with a different style hilt. Both of these would benefit greatly from a silver paint job for the blade. He also comes with a pair of sais, axes and smaller hook blades. He’s ready to wage some major carnage. 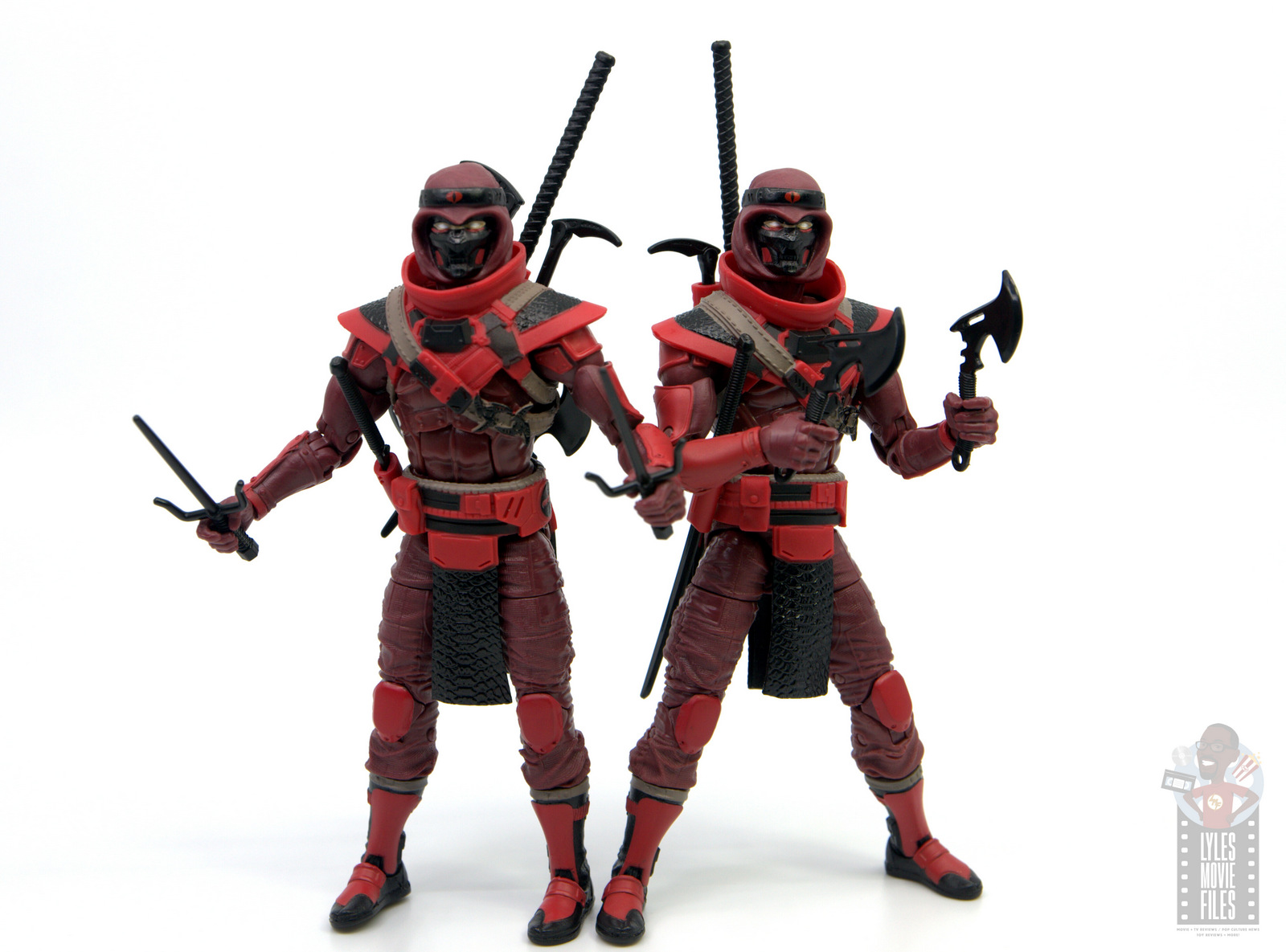 The one complaint of the weapons past the first series is the paint applications have been somewhat underwhelming with the majority just being one color with no accent colors anywhere. It’s hardly the biggest problem, but one that would be nice to not see in subsequent waves. 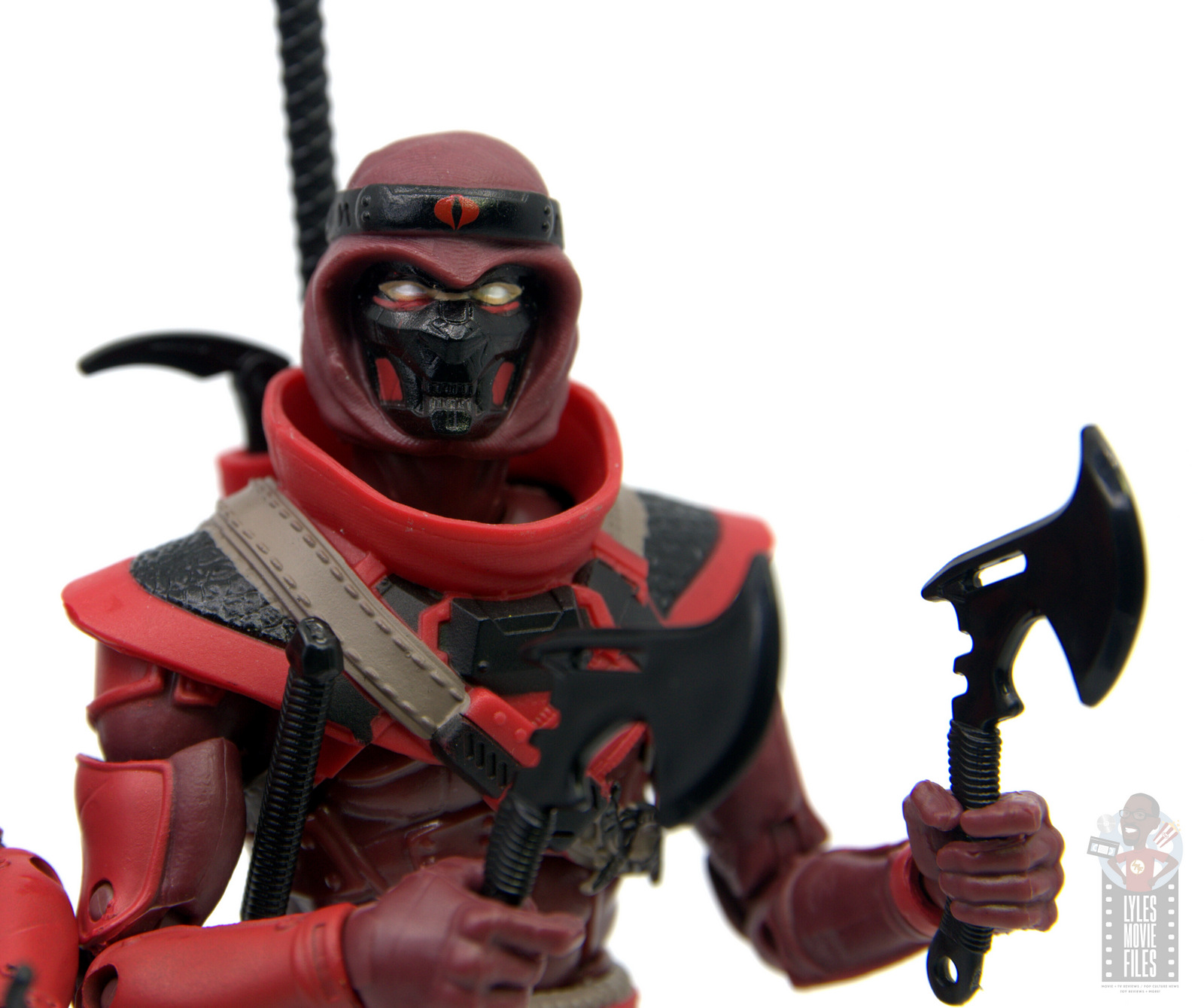 Worth It?  Red Ninja is normally $20, but like this wave he’s been hard to find in stores prompting a quick sell out of most online retailers. I’d still hold off on paying more than $20 though. 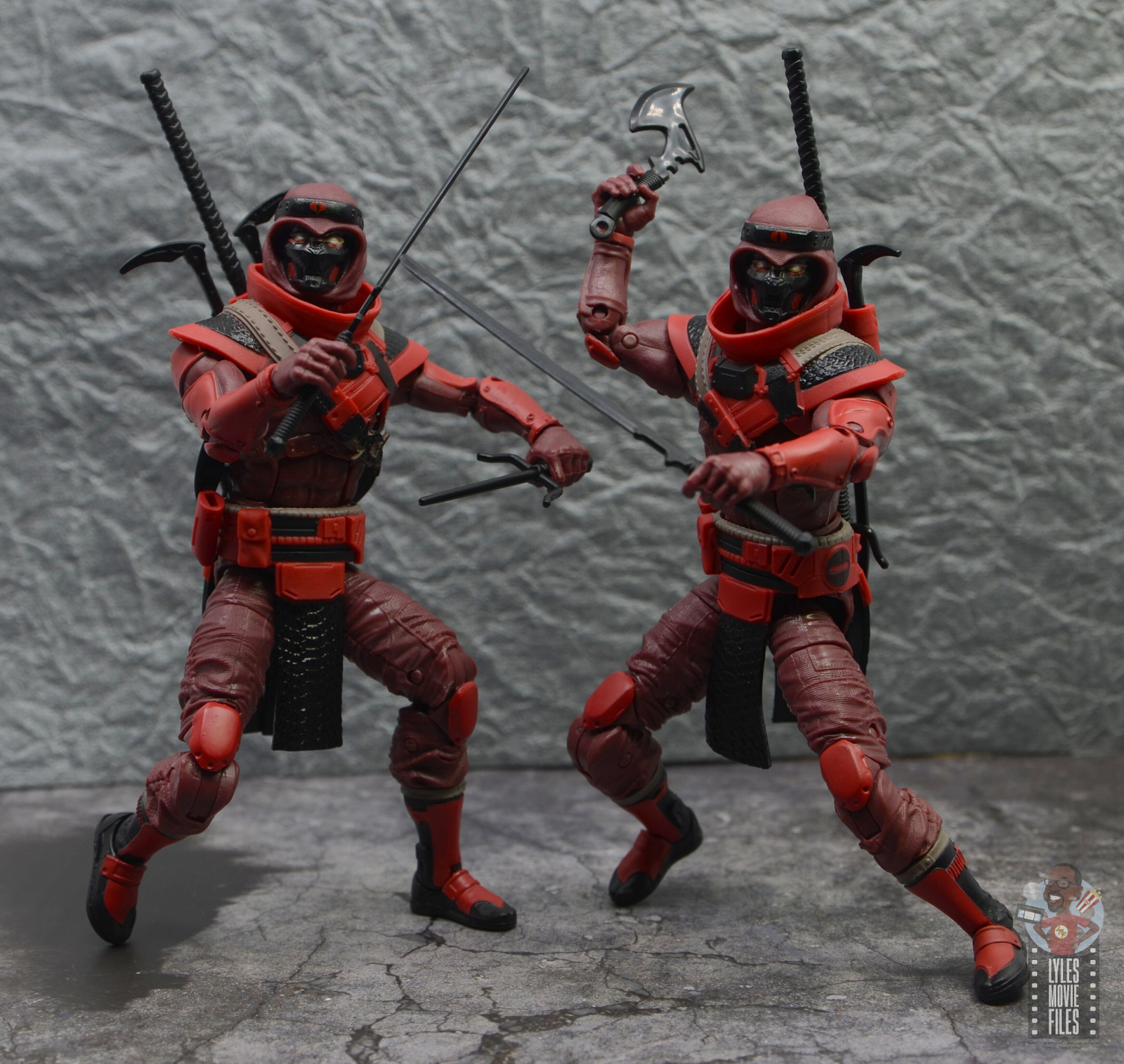 This is a another incredible addition to the Classified Series line. I probably need to get a third Red Ninja to have a trio to send after Snake Eyes or Storm Shadow although this is a very well done figure that warrants additional army building. 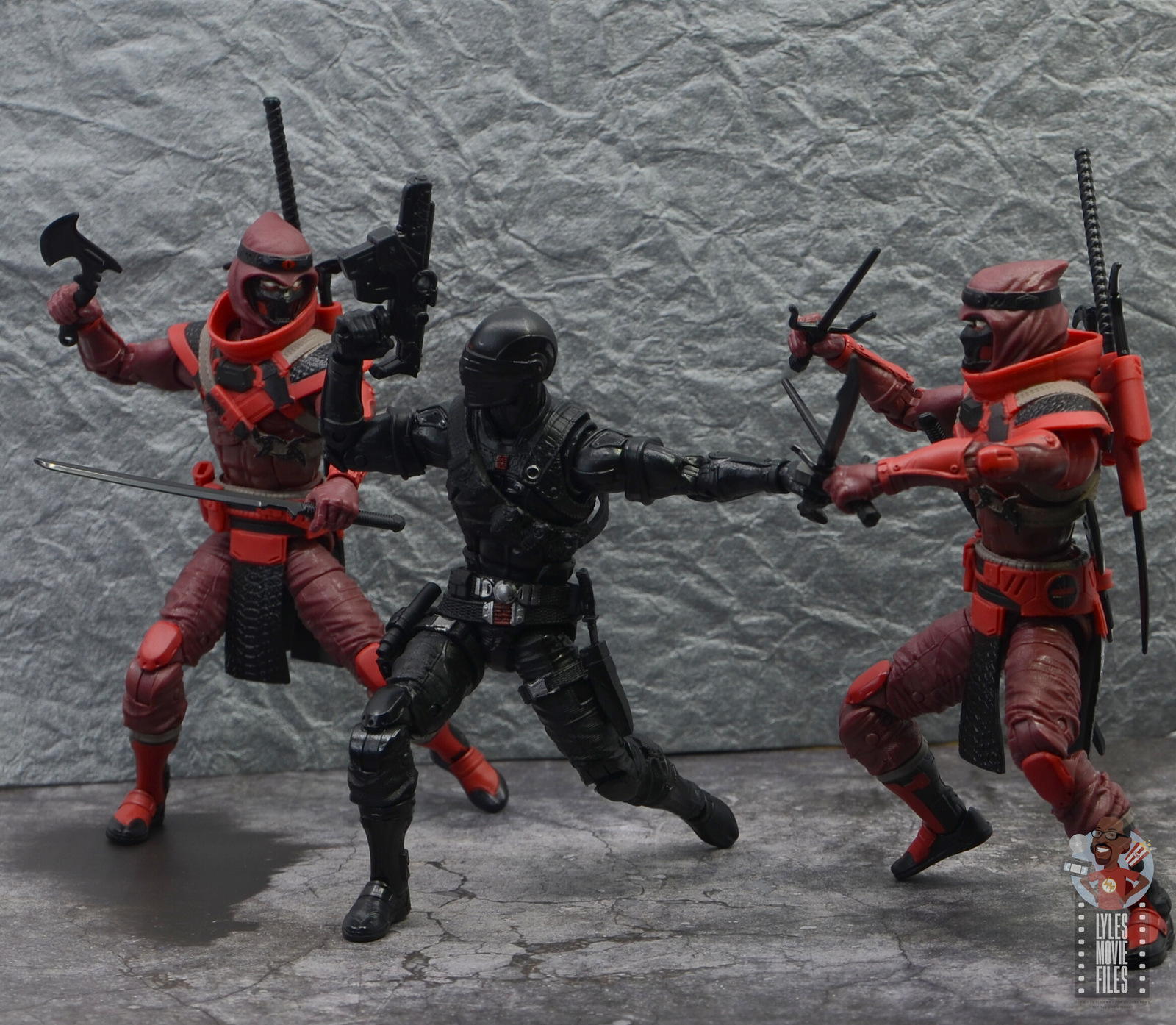 Where to Get It? I’d keep watching Amazon at this rate but the Red Ninja is up for pre-order at Entertainment Earth.