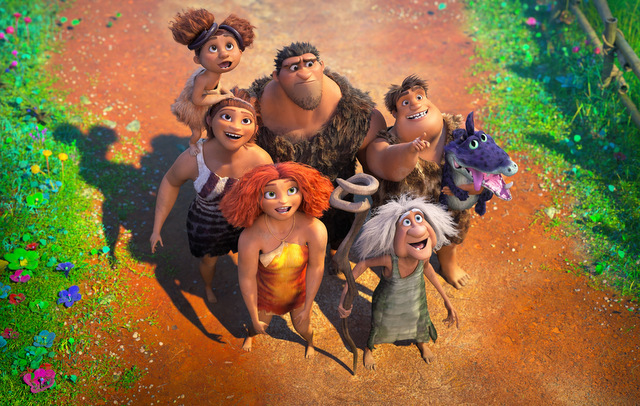 The Croods: A New Age follows the age old sequel blueprint that seems like it originated in the Stone Age, but infuses it with plenty of fun, genuine laughs and embraces the importance of family. In a year where so many families won’t be able to come together this holiday season, the timing of this release couldn’t be better.

Guy (Ryan Reynolds, Deadpool 2) reflects on how he started out as a lonely orphan with just his sloth sidekick as company before meeting up with The Croods and falling for Eep (Emma Stone, Zombieland: Double Tap). 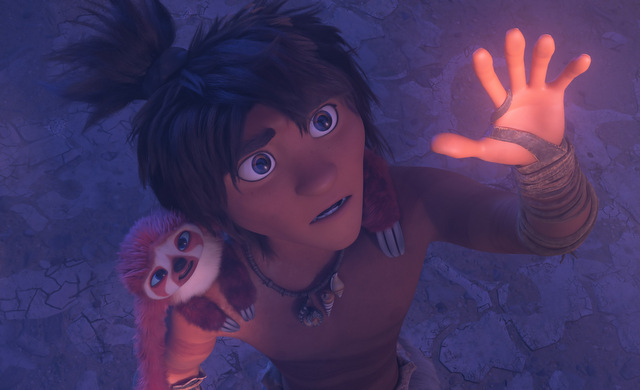 This didn’t sit too well with Eep’s overbearing father, Grug (Nicholas Cage, Mandy), but eventually they all learn to happily co-exist navigating through prehistoric life.

Of course, sharing sleeping space — in a literal pile — with Eep’s mother, Ugga (Catherine Kenner), brother, Thunk (Clark Duke) and Granny (Cloris Leachman) — is putting a crimp on Guy and Eep’s style and they’re considering moving on from the family. This naturally has Grug panicked and desperate to find a better life for the family, one that doesn’t include watching his little girl leave.

Fortunately salvation is just around the bend in an enclosed (read: gated) community inhabited by The Bettermans, who have actual names like Phil (Peter Dinklage, Game of Thrones) and Hope (Leslie Mann, Iron Man 2) instead of sound effects. Their habitat is cutting edge with “modern” conveniences like beds, elevators and windows. The latter fascinates Thunk who quickly becomes a reality show junkie.

The Bettermans also have a daughter, Dawn (Kelly Marie Tran, Star Wars: The Rise of Skywalker) who would make for an ideal mate for Guy. If only the Bettermans could get rid of their uninvited guests…

I appreciated that the film didn’t go the obvious route and put Dawn and Eep as romantic rivals. Guy may literally be the only dude their age, but they don’t have to claw their eyes out over him. Gran’s rambling about her old adventurous days pays off in a clever final act.

Screenwriters siblings Kevin & Dan Hageman and Paul Fisher & Bob Logan craft a smart script that pokes fun at social status, parent meddling and children’s desire to strike out on their own even if it’s in an uncivilized land. There’s some easy laugh slapstick physical comedy, yet the script has a surprising amount of warmth and celebrates family in all its shapes and sizes.

Am I fussing for the sake of fussing for wishing there was some diversity in an animated movie featuring cave people? I feel like I might be although adding in people of color in any animated film shouldn’t require so much thought. 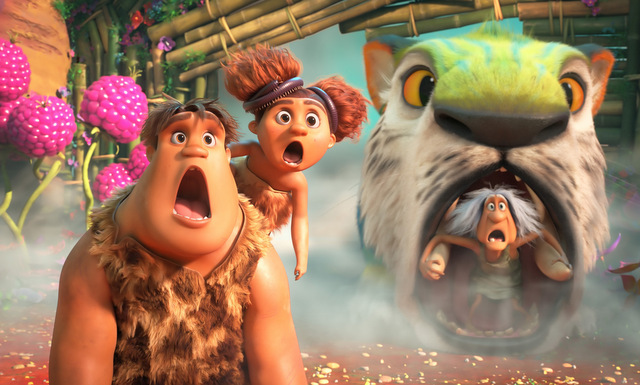 As far as sequels go, it’s refreshingly inviting to series newcomers. There’s not a slew of characters to get familiar with and they’re not so nuanced that there’s an intricate back story for anyone.

This is a film that price (and global pandemic) aside, families probably would have loved seeing in theaters with full 3D trappings after Thanksgiving dinner.

However you need to do it this year and especially if you and your loved ones are in need of a good laugh this week, The Croods: A New Age is a terrific and funny option.