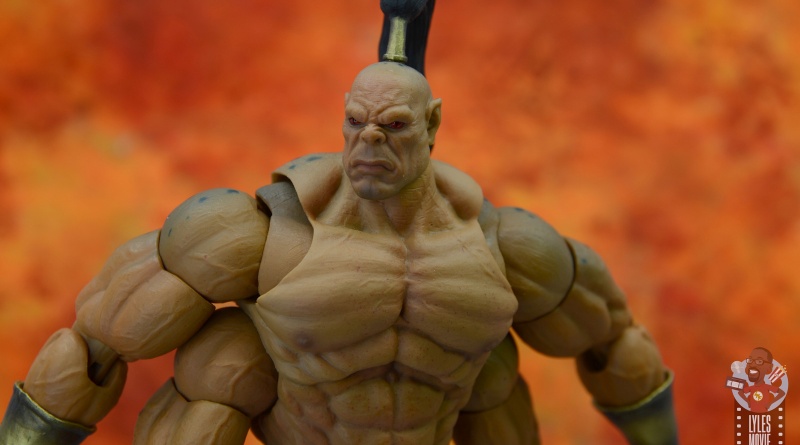 Mortal Kombat isn’t lacking for impressive and imposing looking figures. Goro still stands as my favorite due to the massive frustration I had trying to beat him in the first game. Storm Collectibles isn’t shy about tackling the more labor intensive characters for its Mortal Kombat series, which makes the constant recycling of ninjas and cyborgs more understandable when we get a figure like Goro.  If someone could just lend me a hand (sorry) let’s get started with this guy who’s all thumbs and fists.

Packaging:  Storm Collectibles’ Mortal Kombat package setup is really nice with the dark brown and blood splatters. The character portrait stretches from the front and the left side with a picture of the figure itself on the right side.

On the back, there’s a good assortment of images to show Goro in action and to showcase the various display possibilities. His bio is written with a terrific sense of the dramatic and sets the stage nicely for Mortal Kombat. 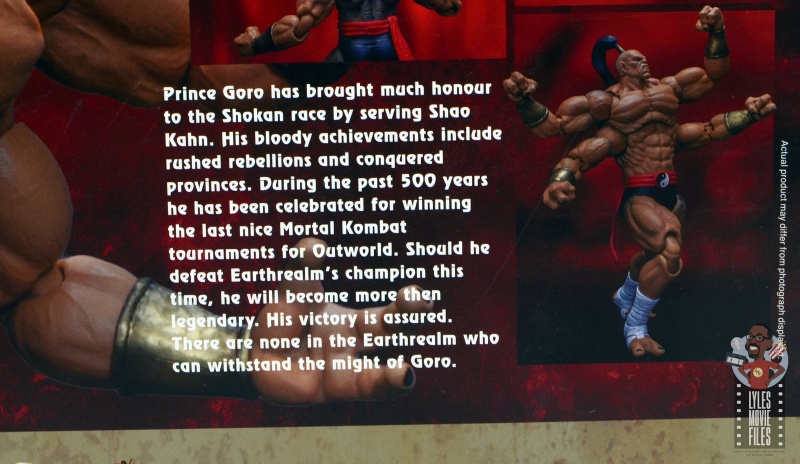 Likeness:  Clearly what stands out the most with Goro is his extra arms. They give him wider shoulders and his torso is also extended. Fitting for his frame, he’s ripped and ready to rip figures apart. 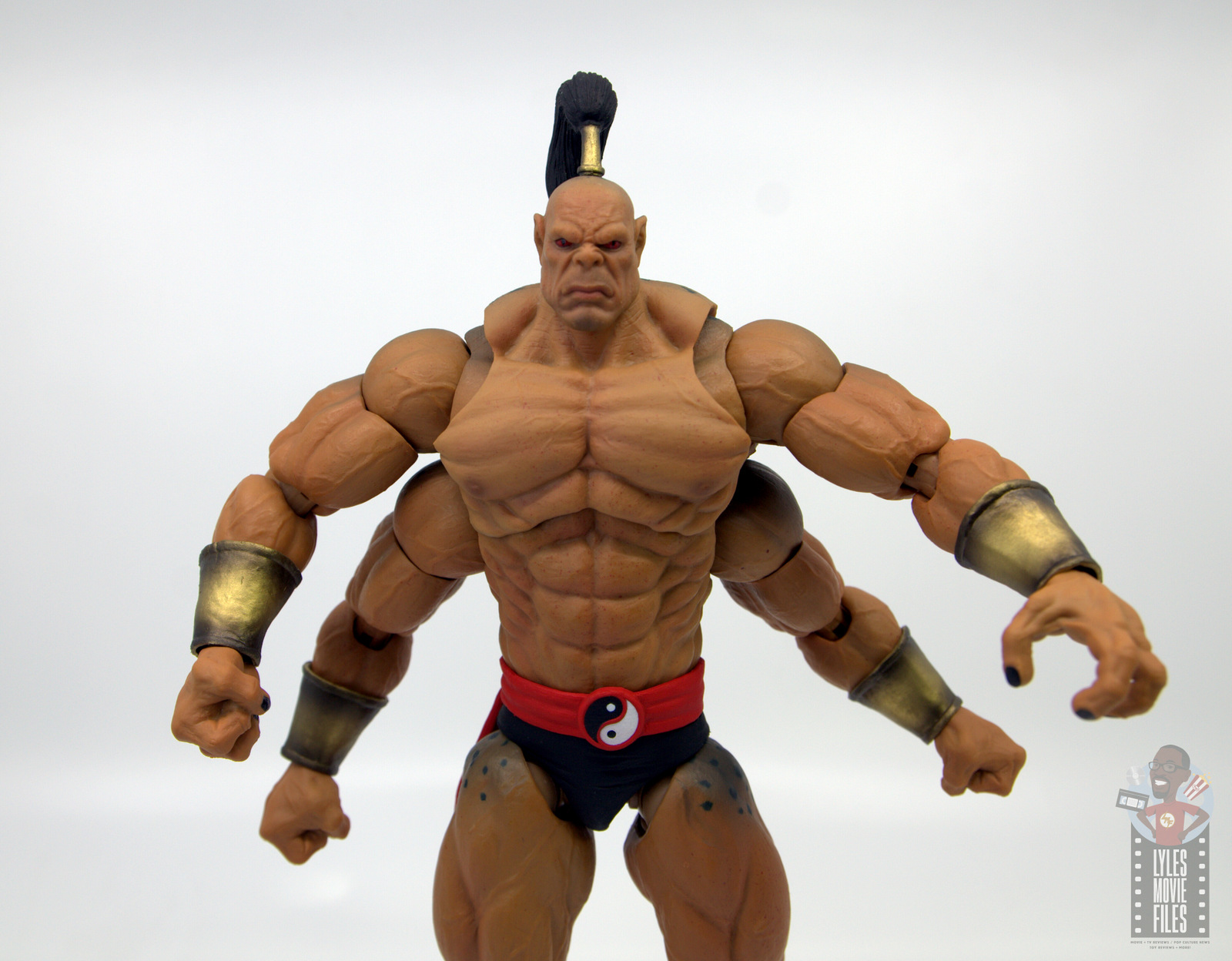 I like the pointed feet and his overall appearance although it is tricky to get the soft plastic briefs to line up properly with the hips.

His head sculpt is terrific as it appears he’s sizing up his next victim. The top-knot style ponytail flows nicely though it’s the one area I’m somewhat concerned about in terms of it snapping if he were to say fall off the shelf. 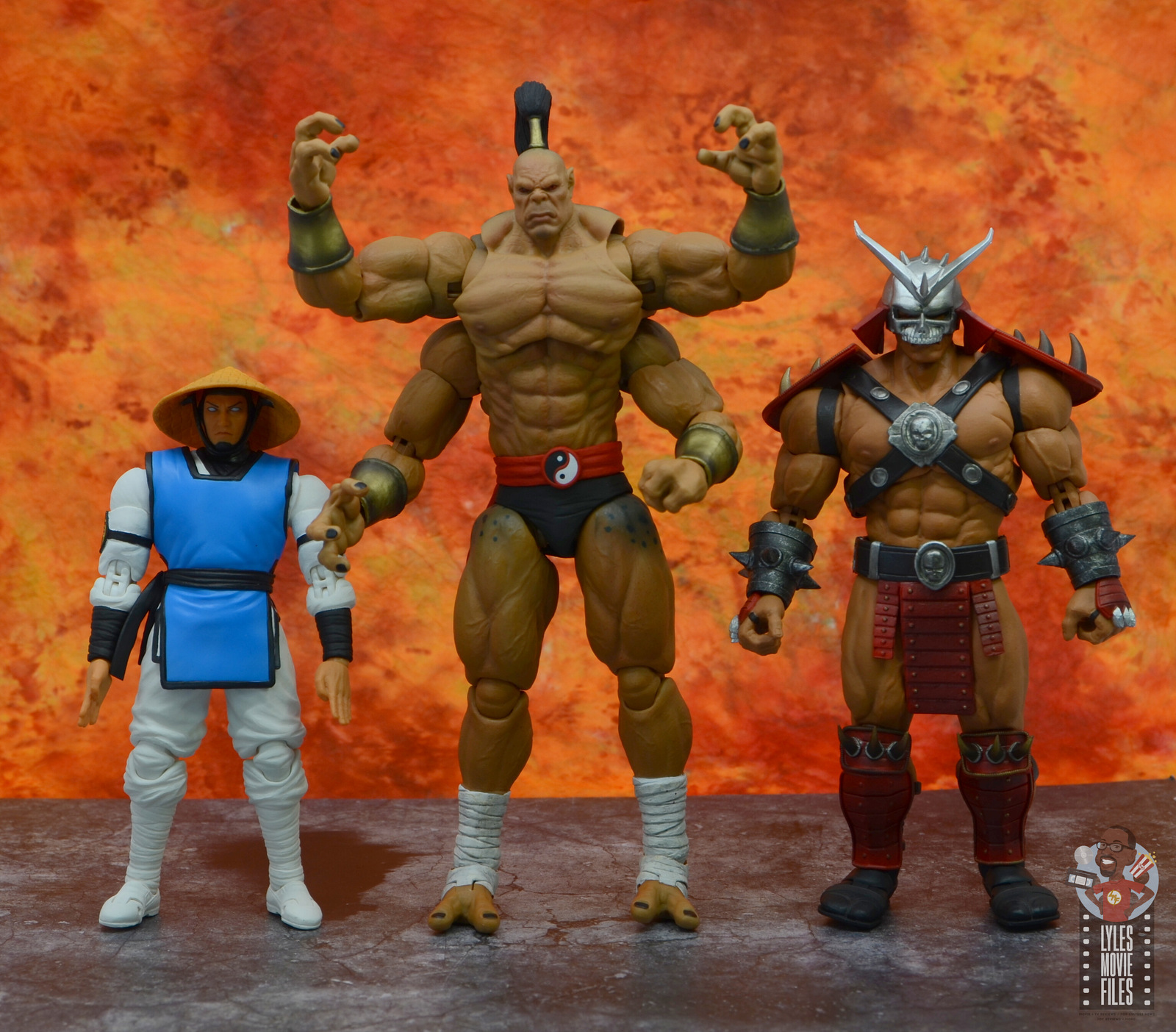 Scale:  Goro was a massive beast in the game and that’s no different with his figure, which towers over the other characters we’ve gotten so far. 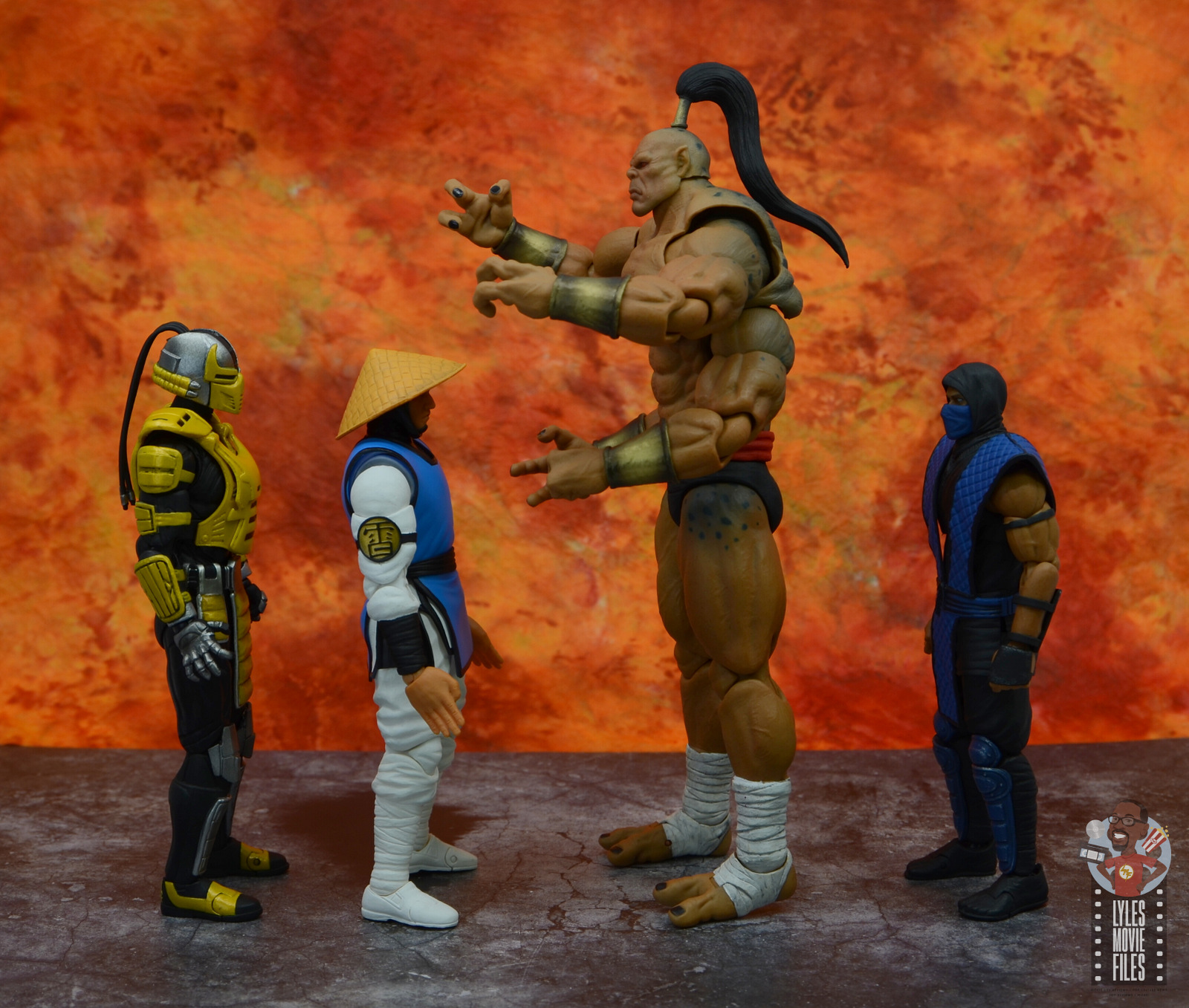 Paint:  Goro reflects one of Storm Collectibles’ more paint intensive and detailed figure with his gold topknot and gauntlet, the wraps around his shins/ankles, the yin/yang on his belt and the grey gradient on his back.

My favorite aspect of the figure is the gold gauntlets, which has some nice weathering like he’s worn them for awhile. 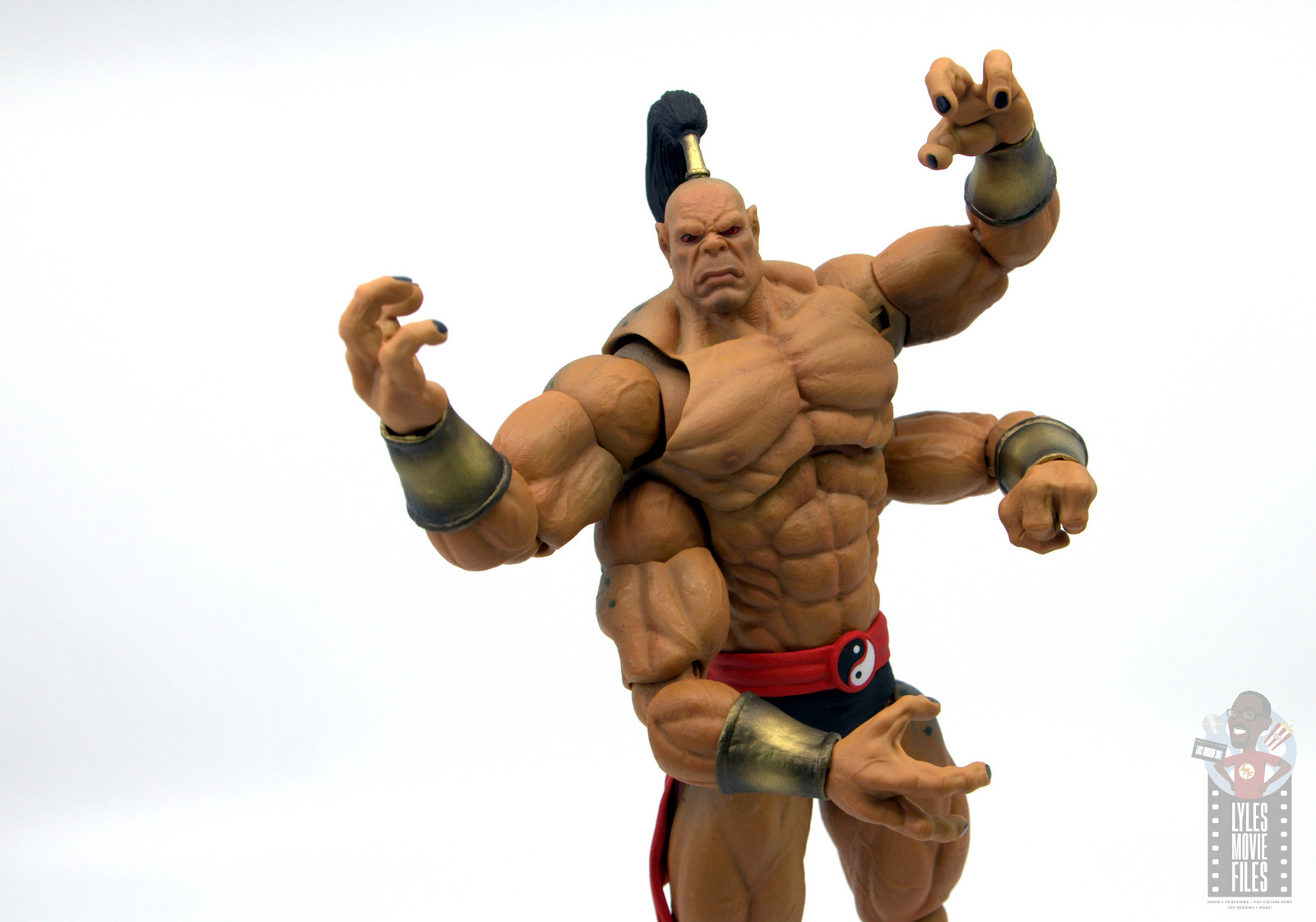 The skin tone has a fantastic amount of shading and mottling even before heading to his gray back. 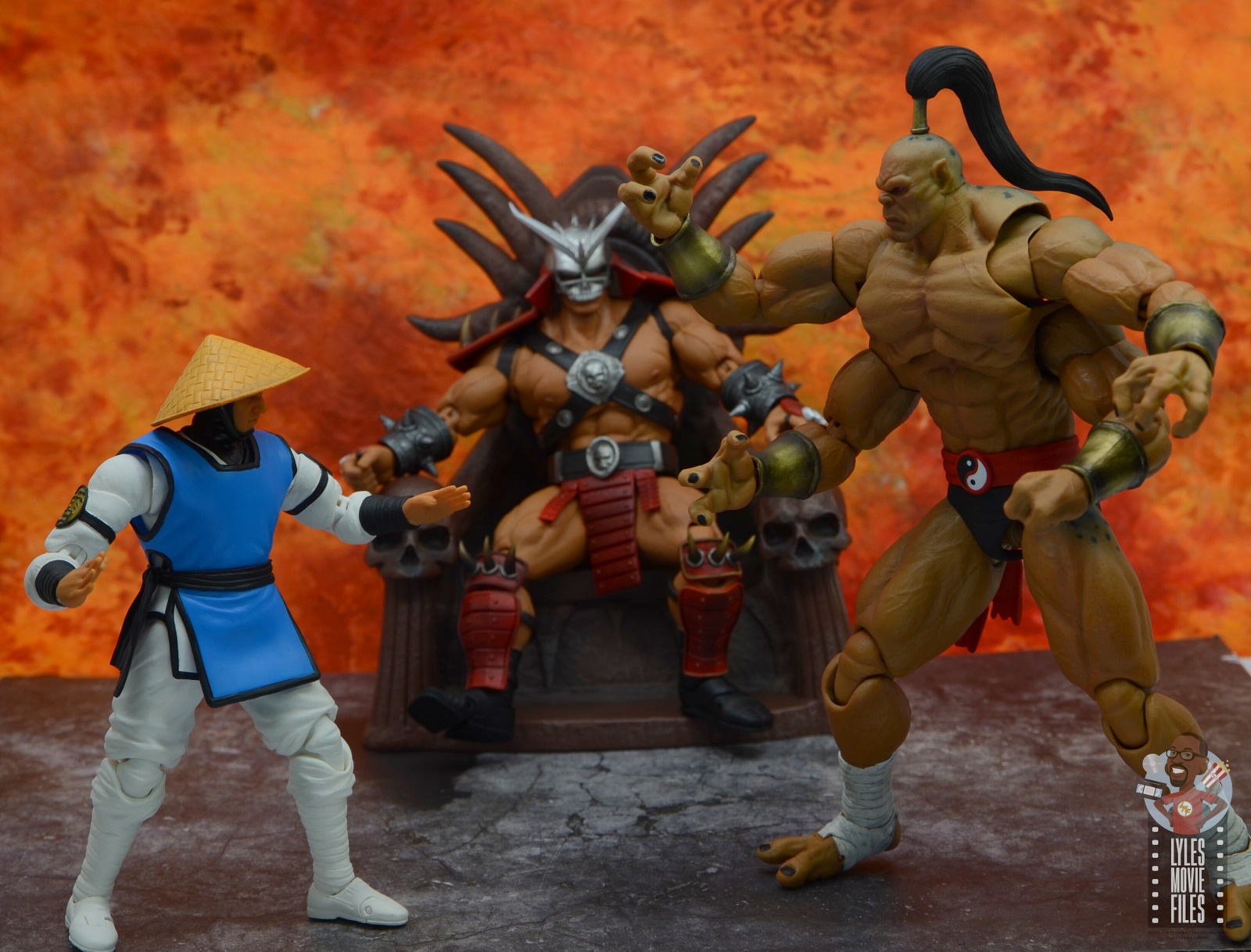 Articulation:  Even with the extra set of arms, Goro retains the same incredible amount of articulation I’ve come to expect from the line. He’s actually really fun to pose and manhandle the other figures with in unique ways thanks to the arms. 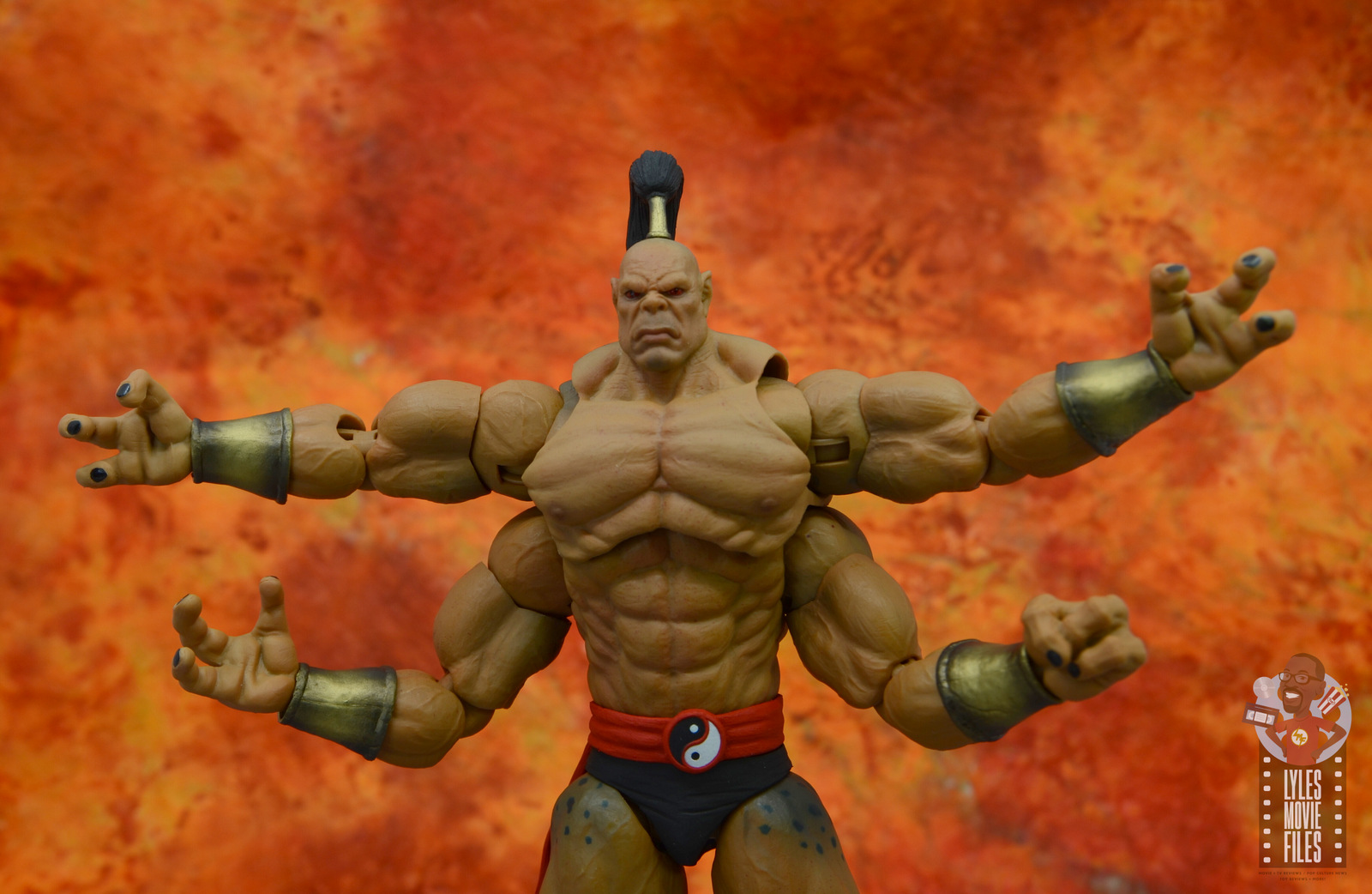 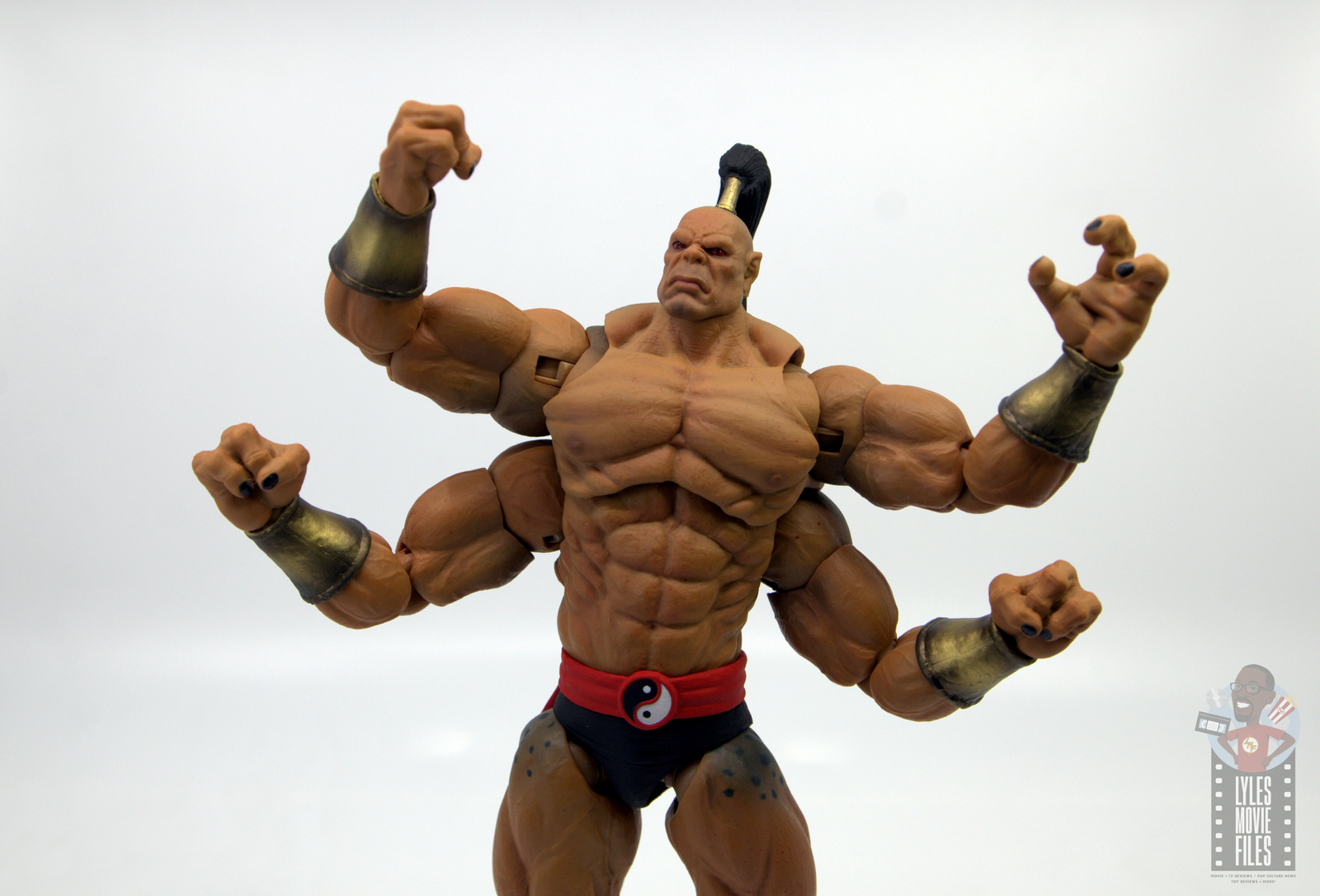 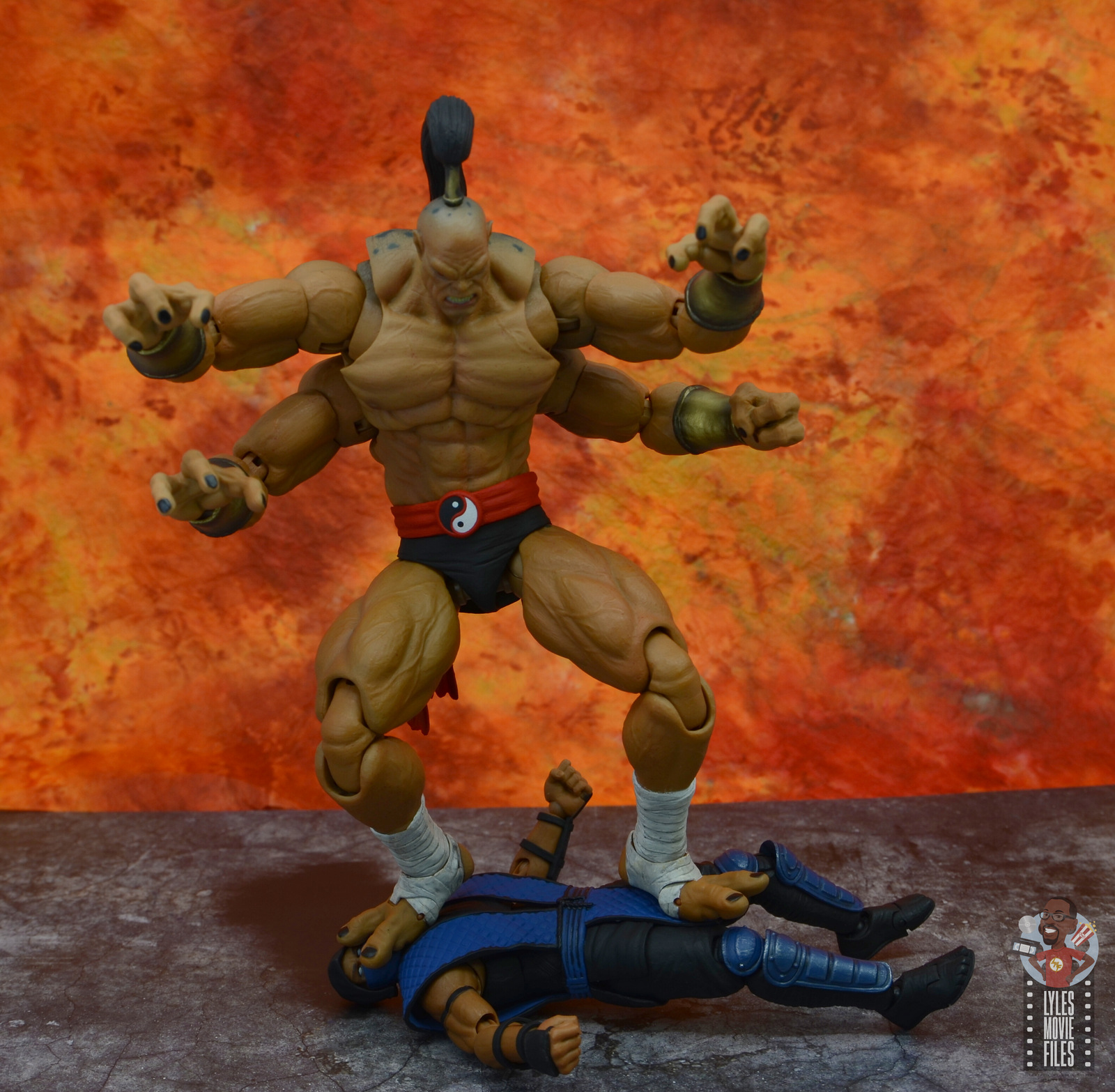 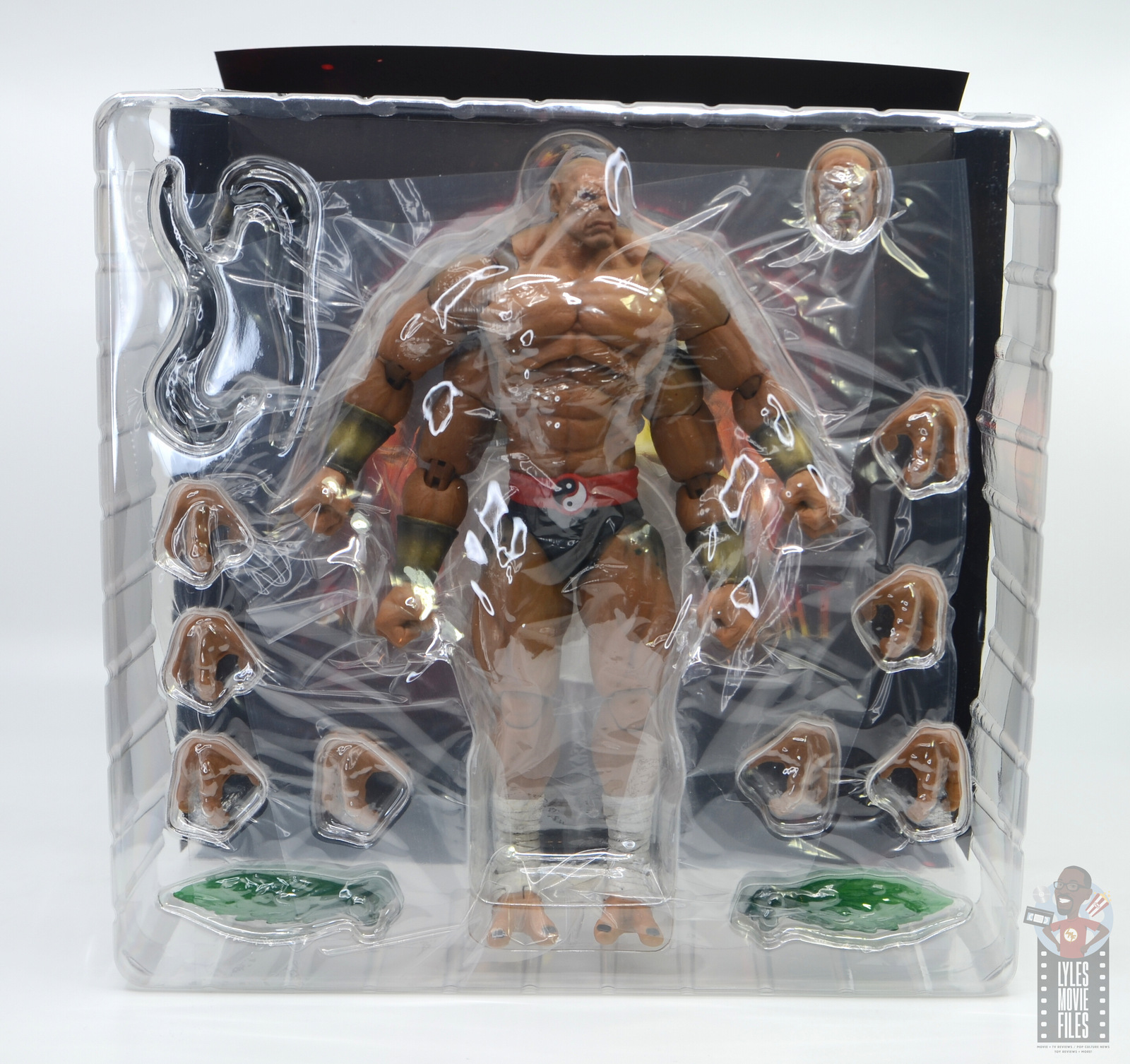 I love that he comes with two different ponytail. 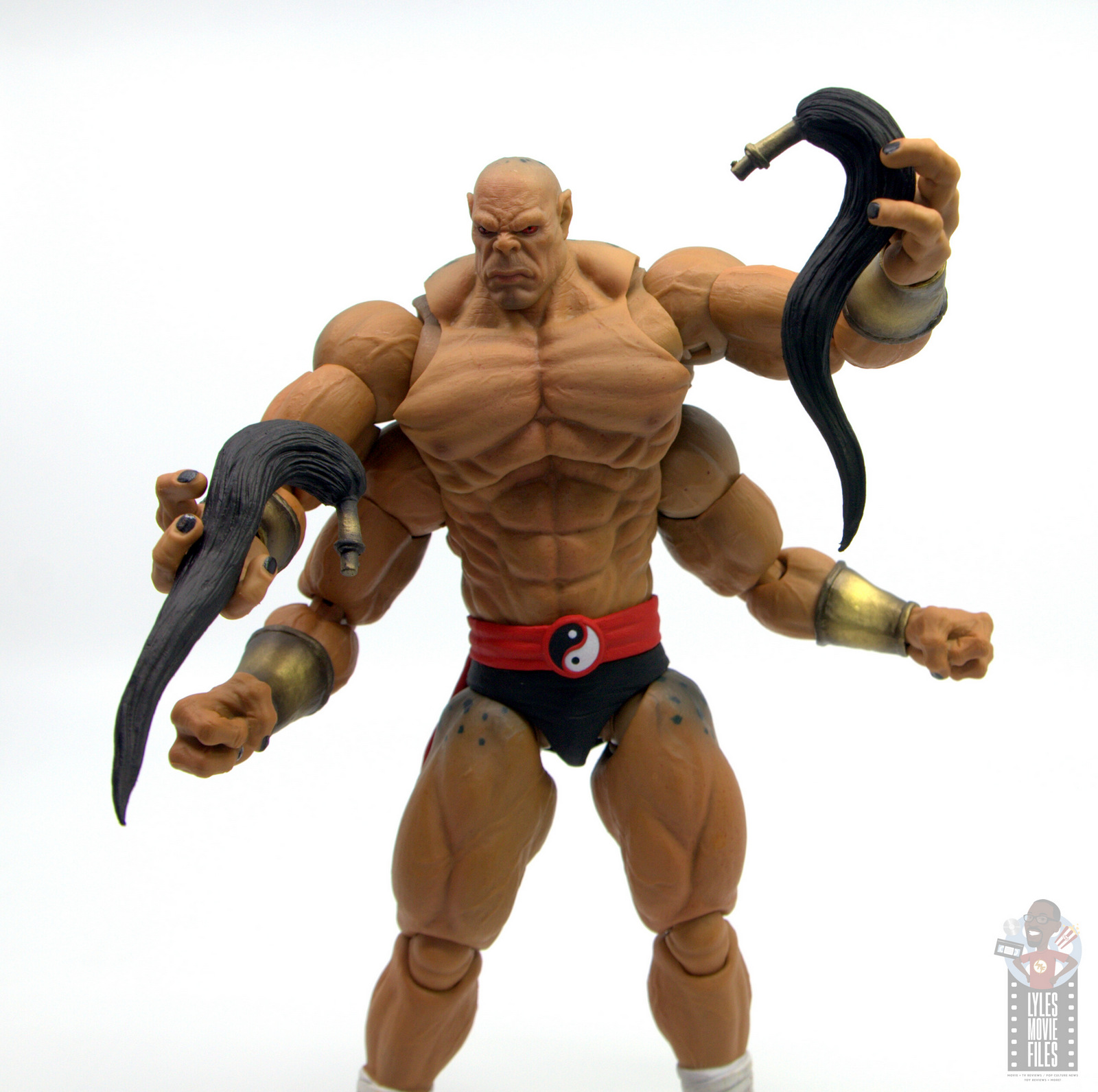 He’s got an alternate head sculpt featuring an angry expression. I always appreciate the option of switching the heads up as it allows for greater diversity in posing/display. 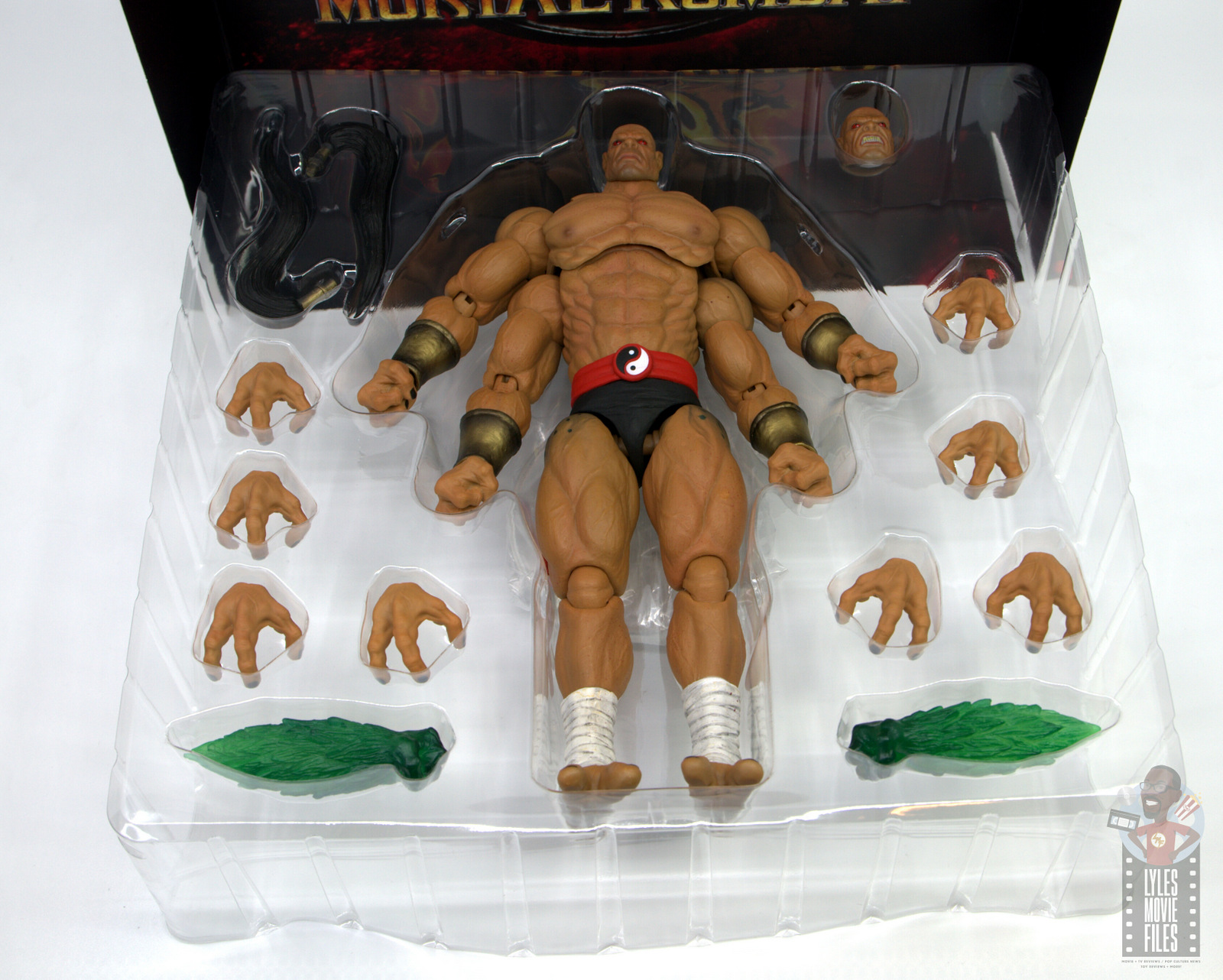 He does come with two green fireballs. I’m not sure if you could actually utilize two at the same time given the positioning and seemingly single use of the fireball stand. 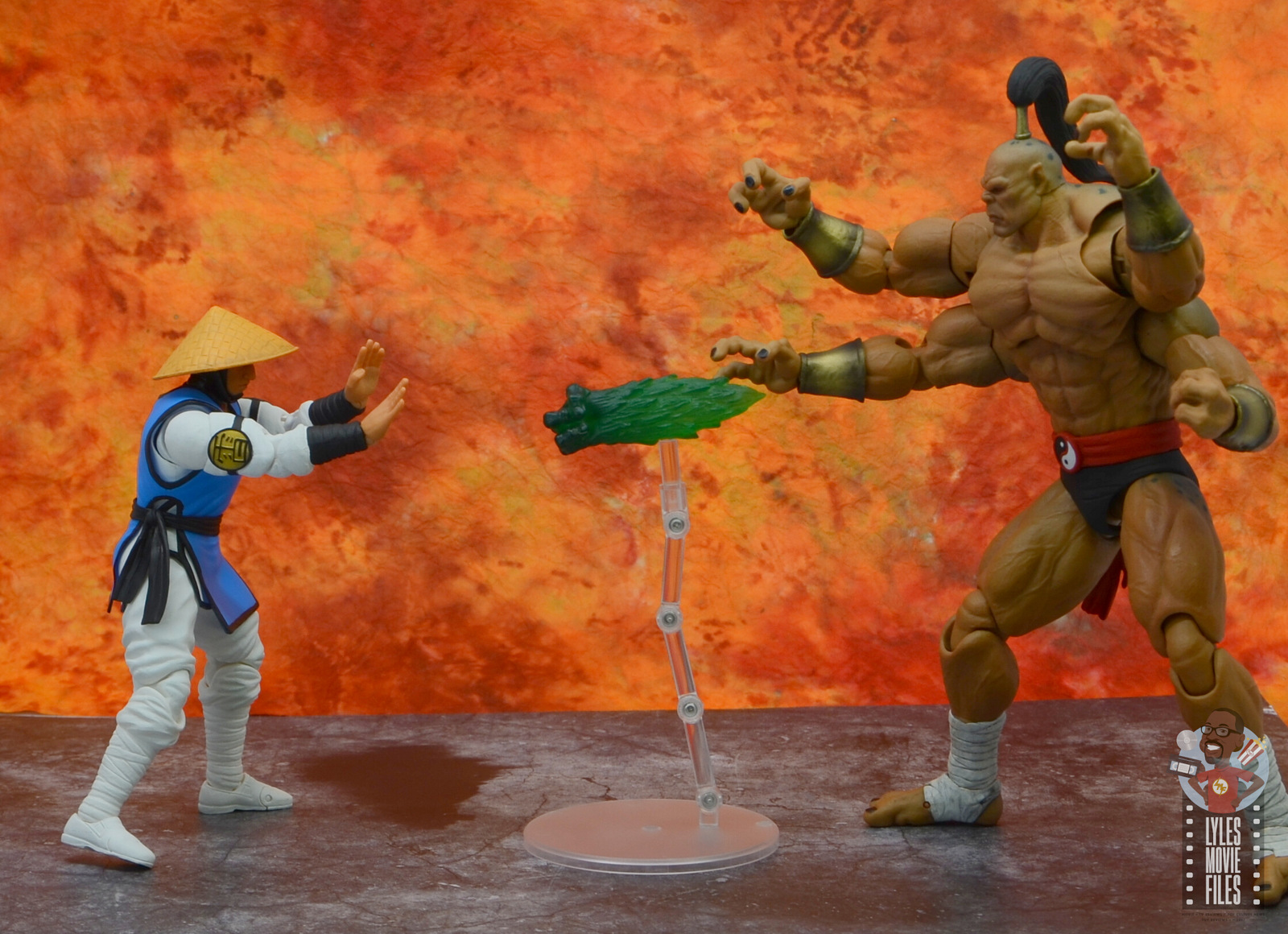 Worth It?  Goro is one of those examples why it’s best to get these figures sooner than later. He’s clocking in now at $300, which is $200 more than his original release.

I was very happy to get this mammoth addition to the Mortal Kombat line. He’s probably my favorite of the line so far until Storm Collectibles tackles Johnny Cage, Jax, Sonya and Liu Kang. 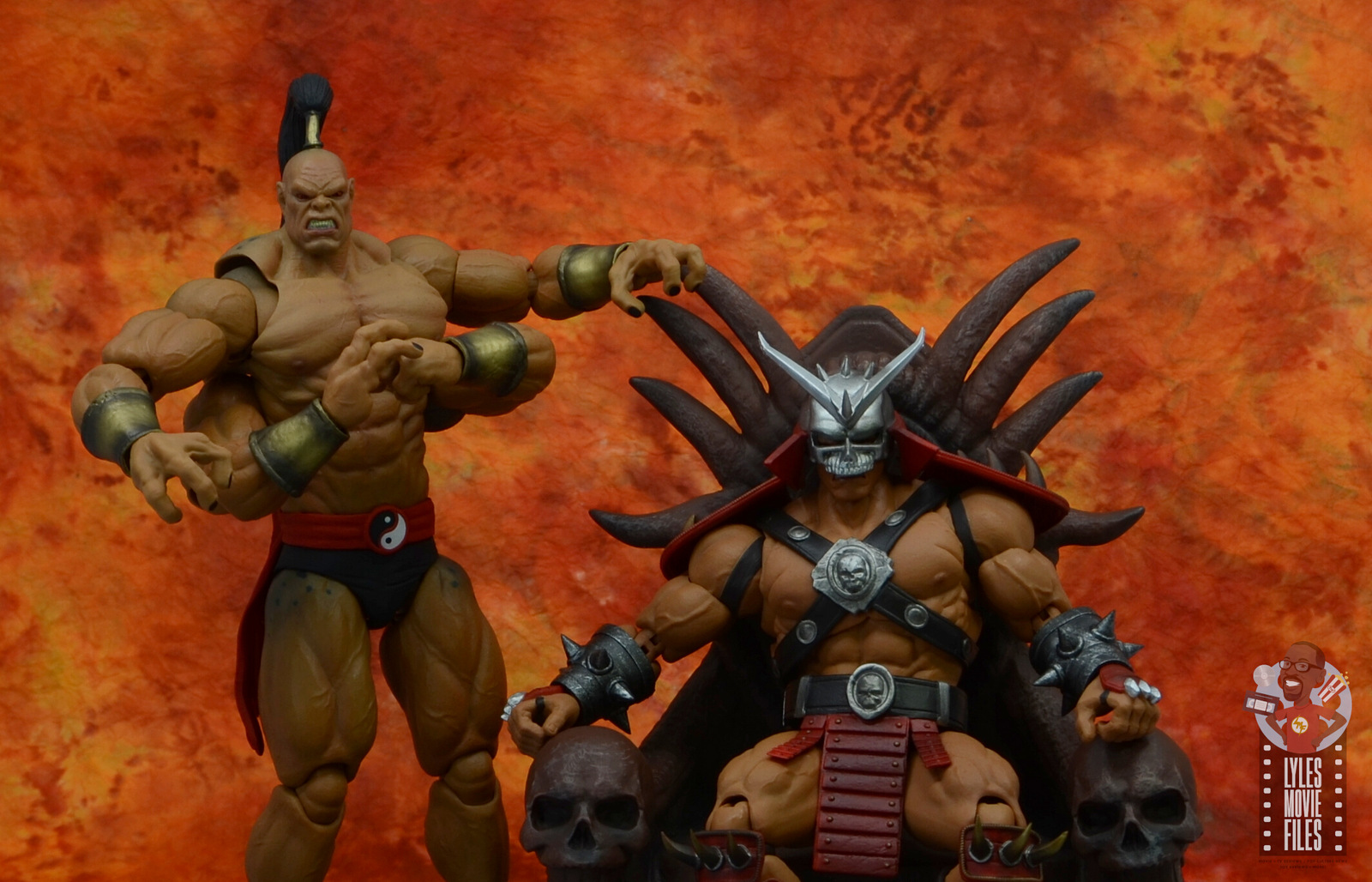 Where to Get It:  I don’t envision Storm Collectibles re-releasing him, but you can get him for a better price on eBay than the current Amazon price. 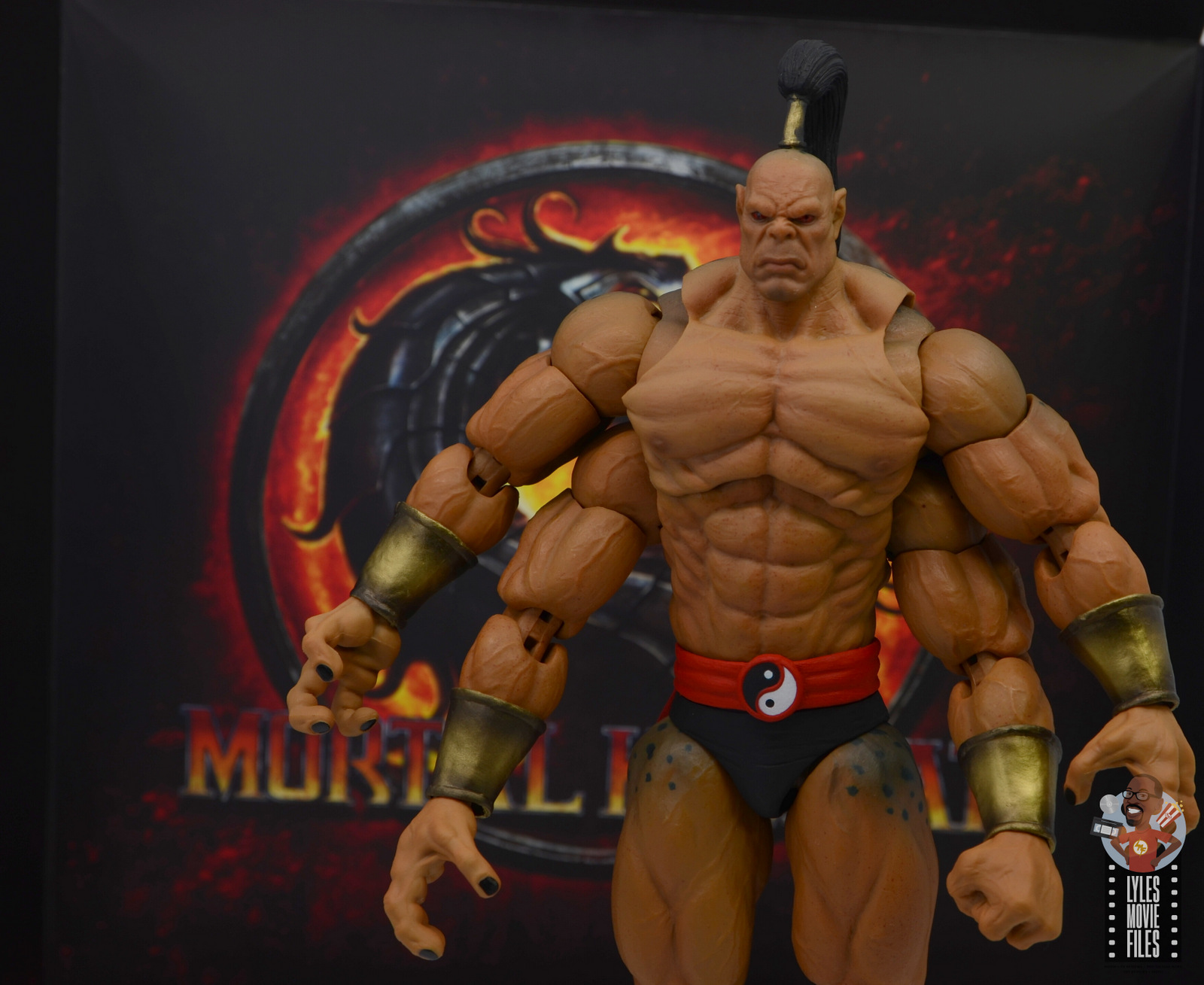