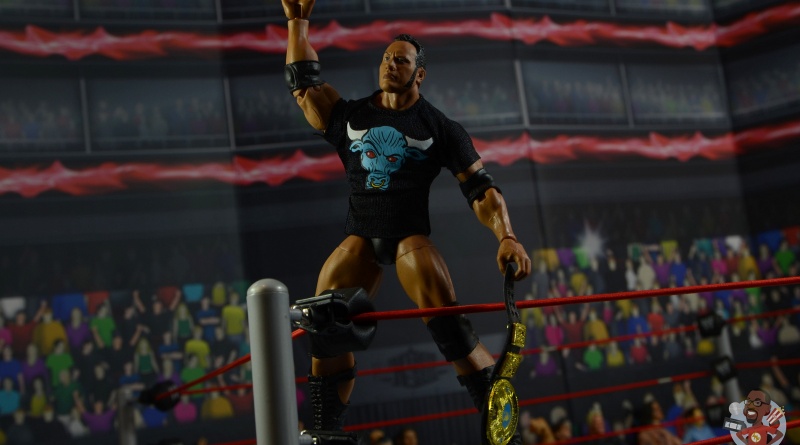 It would be hard to have a Mount Rushmore of wrestlers and not include The Rock on it at this point. A lot of times we like to say we knew so and so was going to be a star, but from the second Rocky Maivia joined The Nation of Domination and became The Rock, it was clear the WWE had its next generational superstar.

Mattel has released several versions of The Rock through various stages of his career, but the hope is this Ultimate Edition version of The Rock is the definitive version…for now. 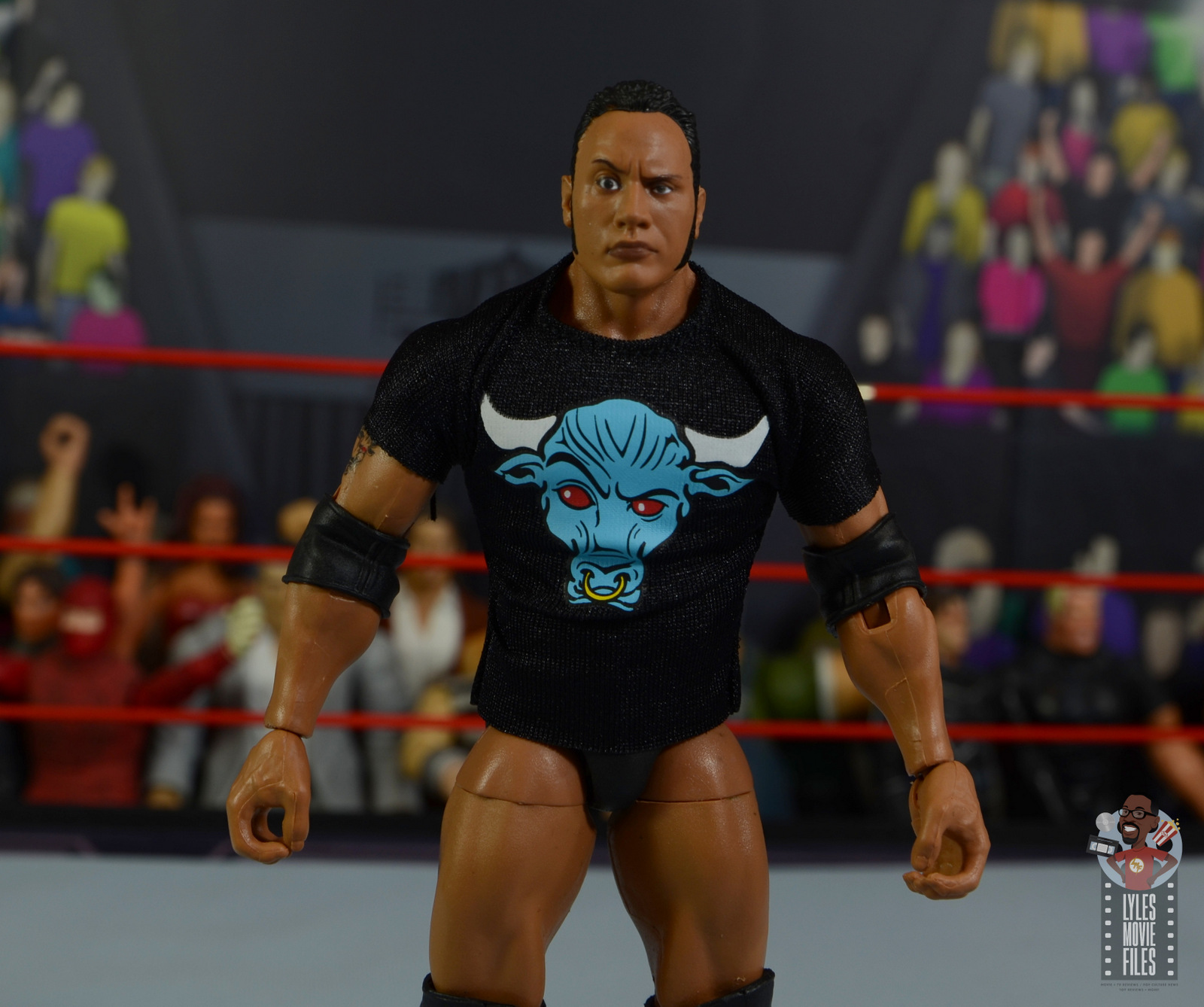 Mattel’s already made some advancements in the UE articulation scheme that will mandate another Rock, but until then let’s see if this will be the only version of The Great One any collector really needs on their display.

Packaging:  While it’s not the most space friendly, I do like most of the packaging. The window for the figure and the accessories should be bigger and it feels like there’s a lot of wasted space. Only one side features an actual portrait of The Rock.

The bio is cool even if it’s not the best we’ve seen from the stellar write-ups with some other figures. That’s more credit to the fantastic bios Mattel has done this year than a knock on this one. 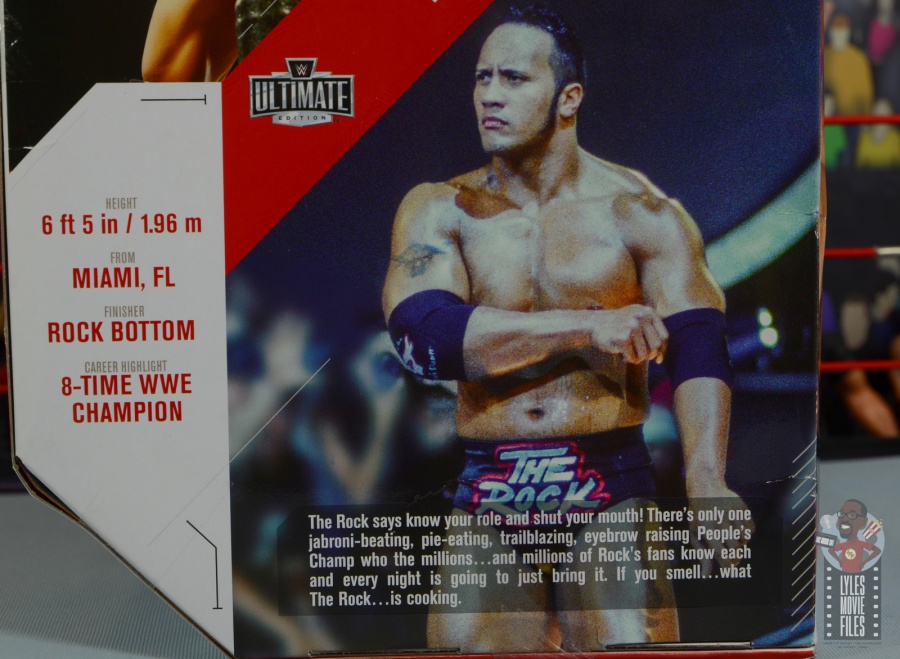 All of the important stats are included and I love the concept of a picture of the figure along with another one of the character himself. 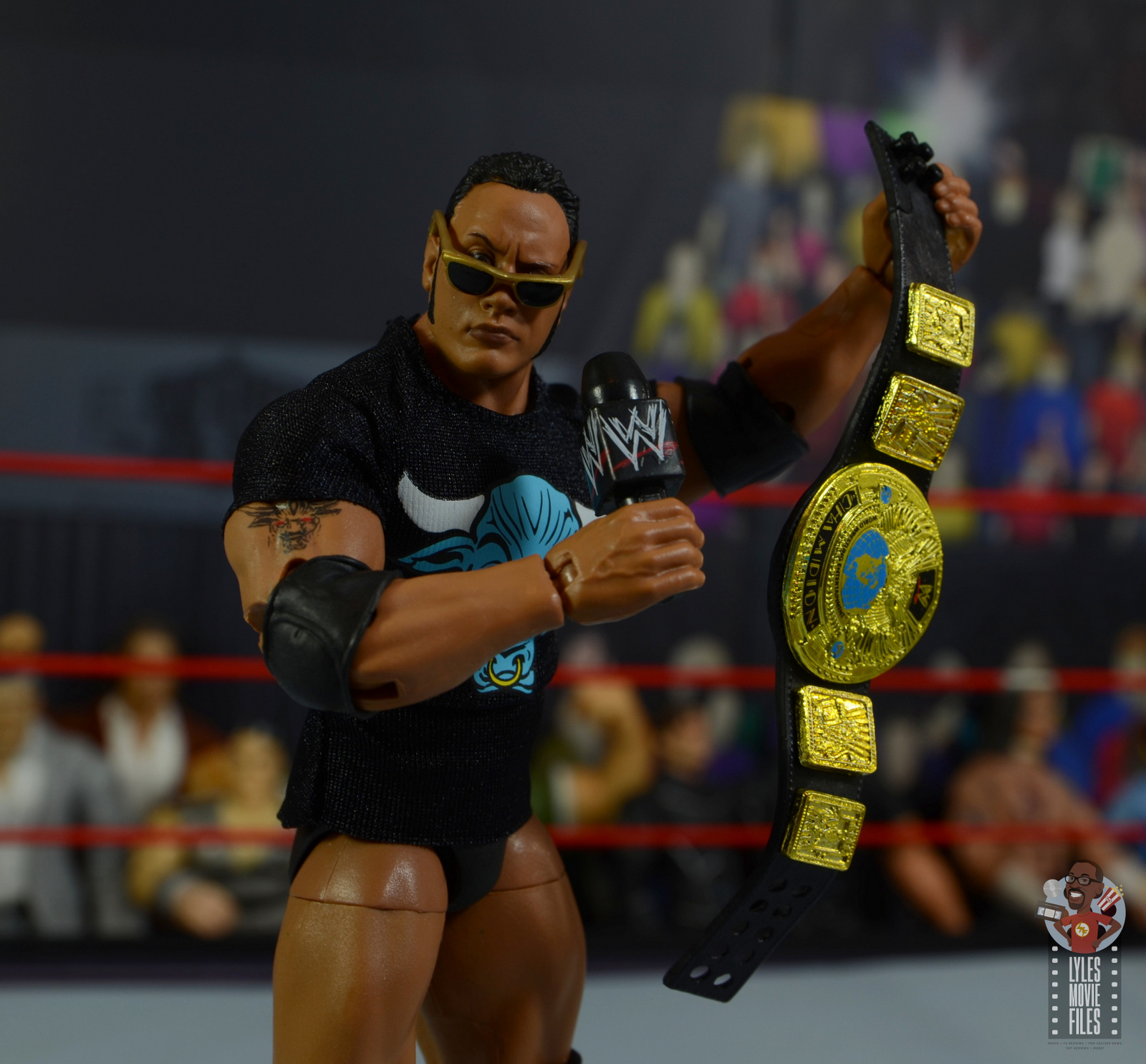 Mattel included a People’s Eyebrow version, a neutral expression and a yelling/anguished expression. The work on all three head sculpts is exceptional, but my favorite in context one is the yelling/anguished one as it works for an intense promo or if he’s trying to escape a submission hold. I imagine I’m going to switch out the various head sculpts all the time depending on my mood.

Most of the figure is the standard baseline Elite figure with the exception of the torso and arms. I still appreciate Mattel making Rock’s unique boots instead of trying to take shortcuts on them. 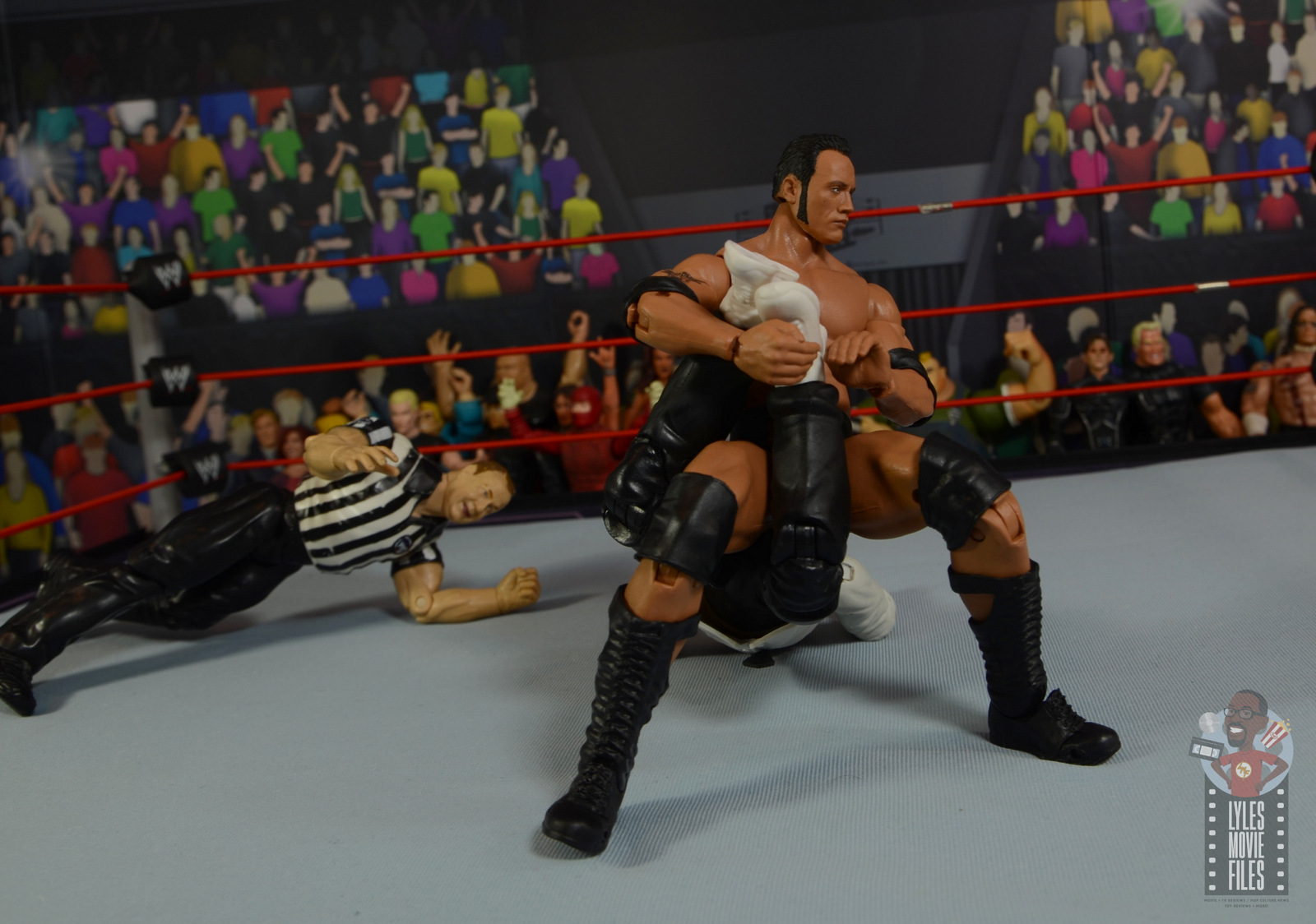 At his prime, The Rock was in decent shape — he never really had that chiseled in granite physique, but he was in athletic. The Ultimate Edition figures don’t have the widest array of torsos right now so The Rock although the torso Mattel used seems like the ideal fit for The Great One.

Scale:  The Rock was 6’5”, putting him three inches taller than his arch foe Stone Cold Steve Austin and an inch taller than rival Triple H. 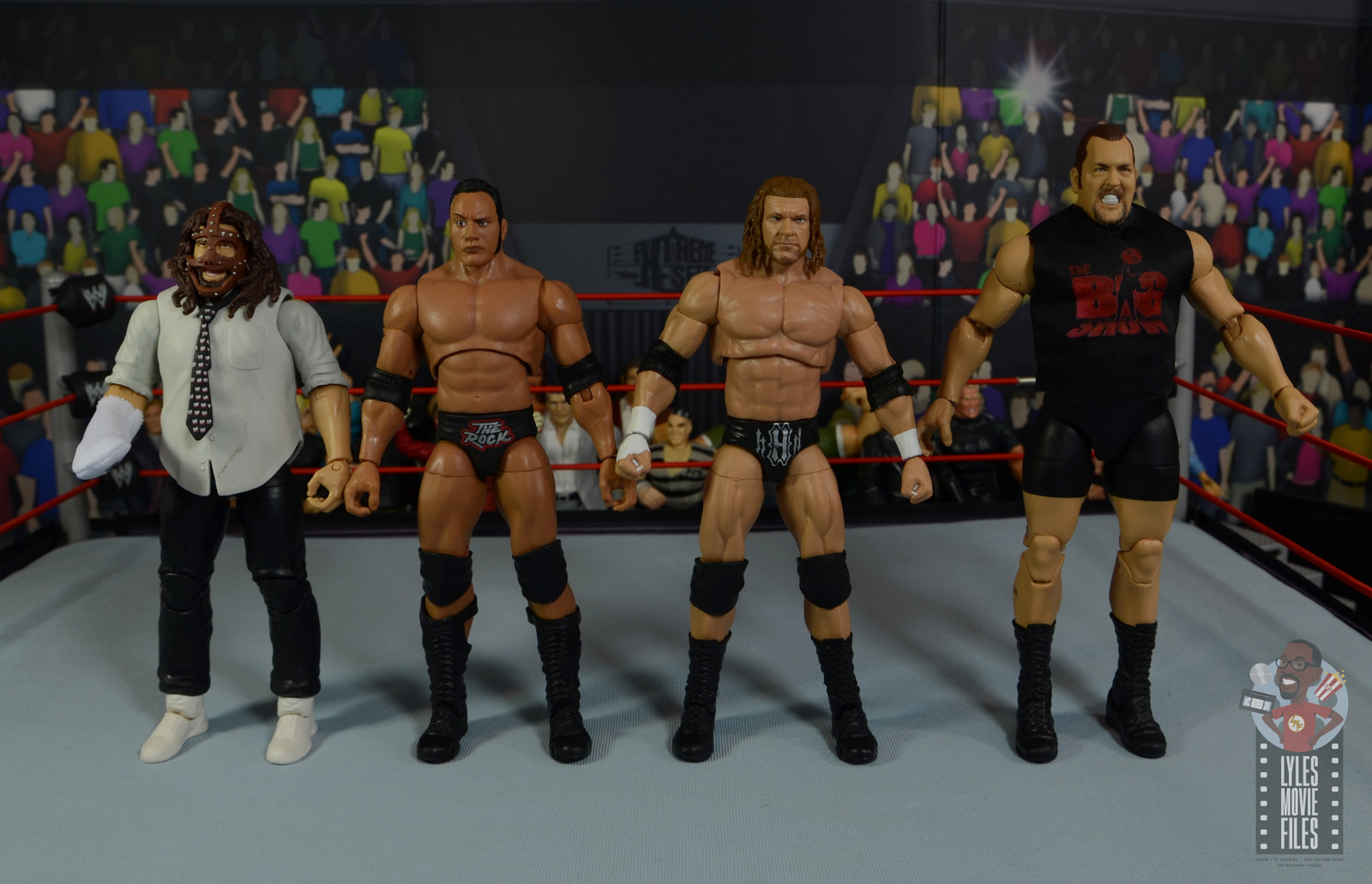 The Elites and Ultimate Edition figures size up pretty well, but it is cool to have a UE Triple H to battle a UE version of The Rock. 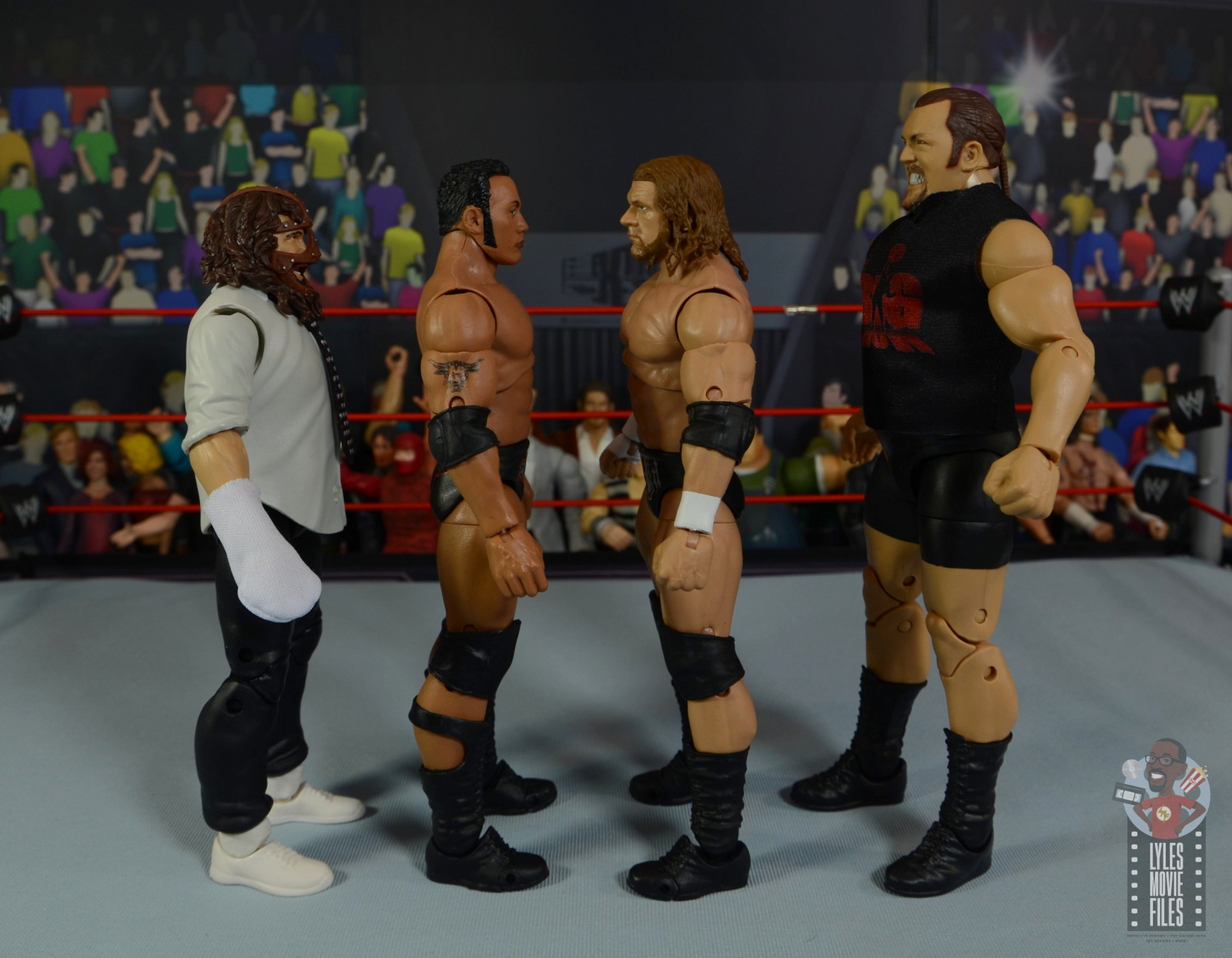 Paint:  I’ve read a slew of complaints from collectors who got The Rock some bad paint work on one of the three portraits or the sunglasses. 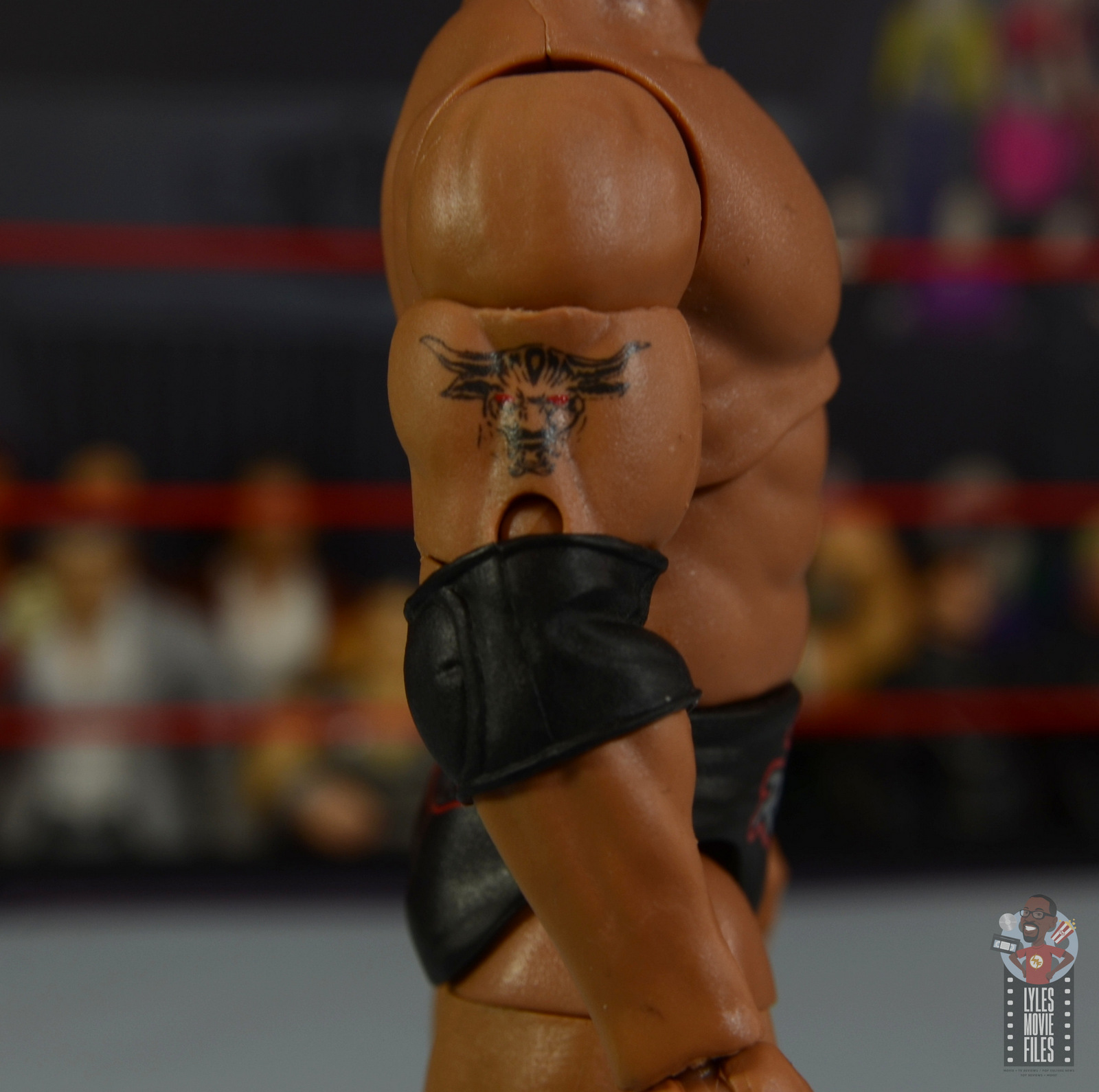 Fortunately that wasn’t the case with my figure. Mattel doesn’t tend to do shoddy paint work on tampos and tight designs and Rock’s is so simple I wasn’t expecting that here either.

Articulation:  The Rock was a better athlete than some folks probably remember and he had a nice snap to his move set that gave them the proper jolt of power. 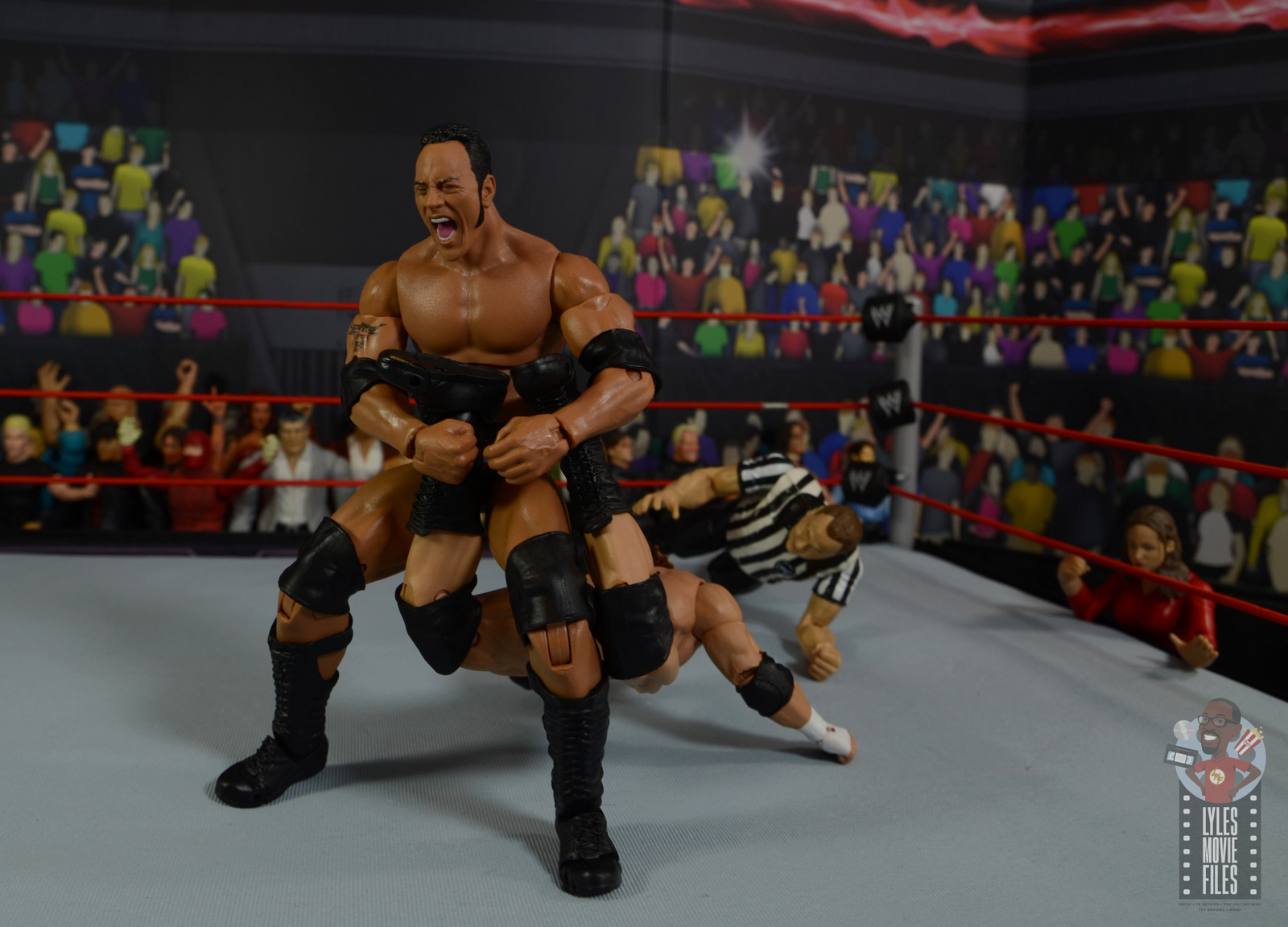 The Ultimate Edition articulation model helps make those moves a little easier to pull off including a more dynamic looking Rock Bottom. 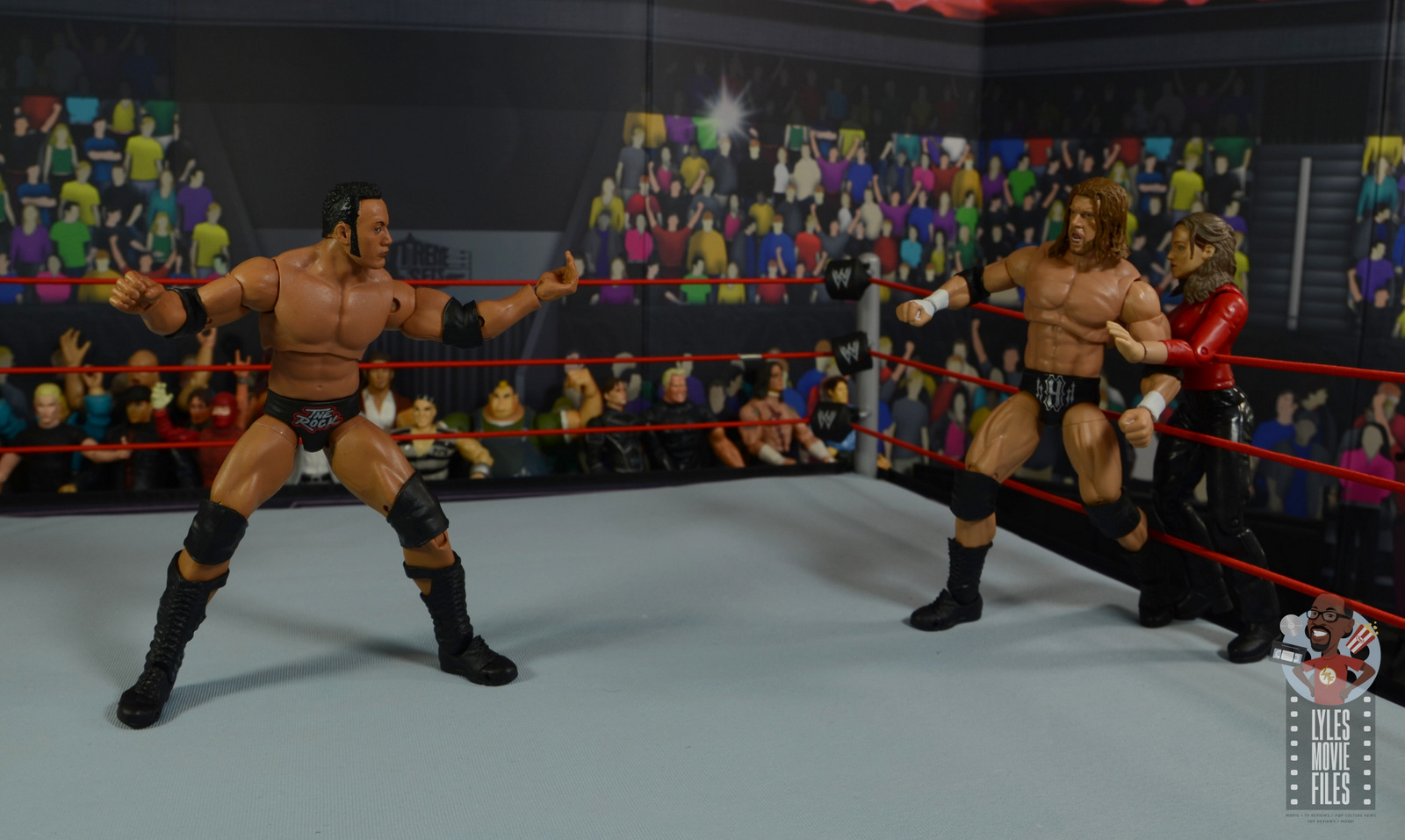 The double-jointed elbows needed to be part of this line years ago, but I’m glad Mattel has finally implemented them as it certainly helps for The Rock with his People’s Elbow. 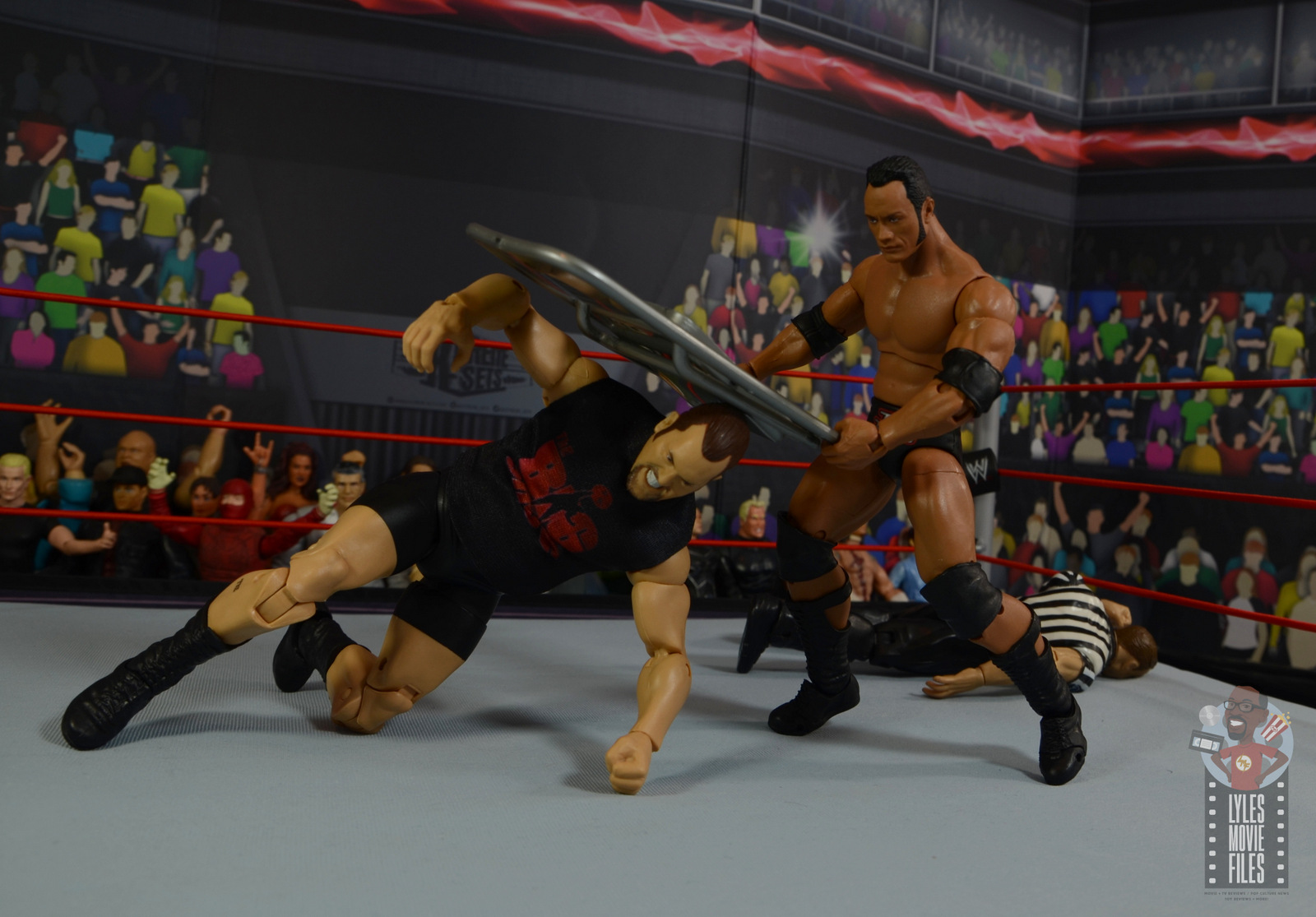 When Mattel adds the butterfly joints to the UE model, The Rock will definitely need an update although thanks to not changing his look up significantly before he added the Samoan tattoos any update will fit in fine. 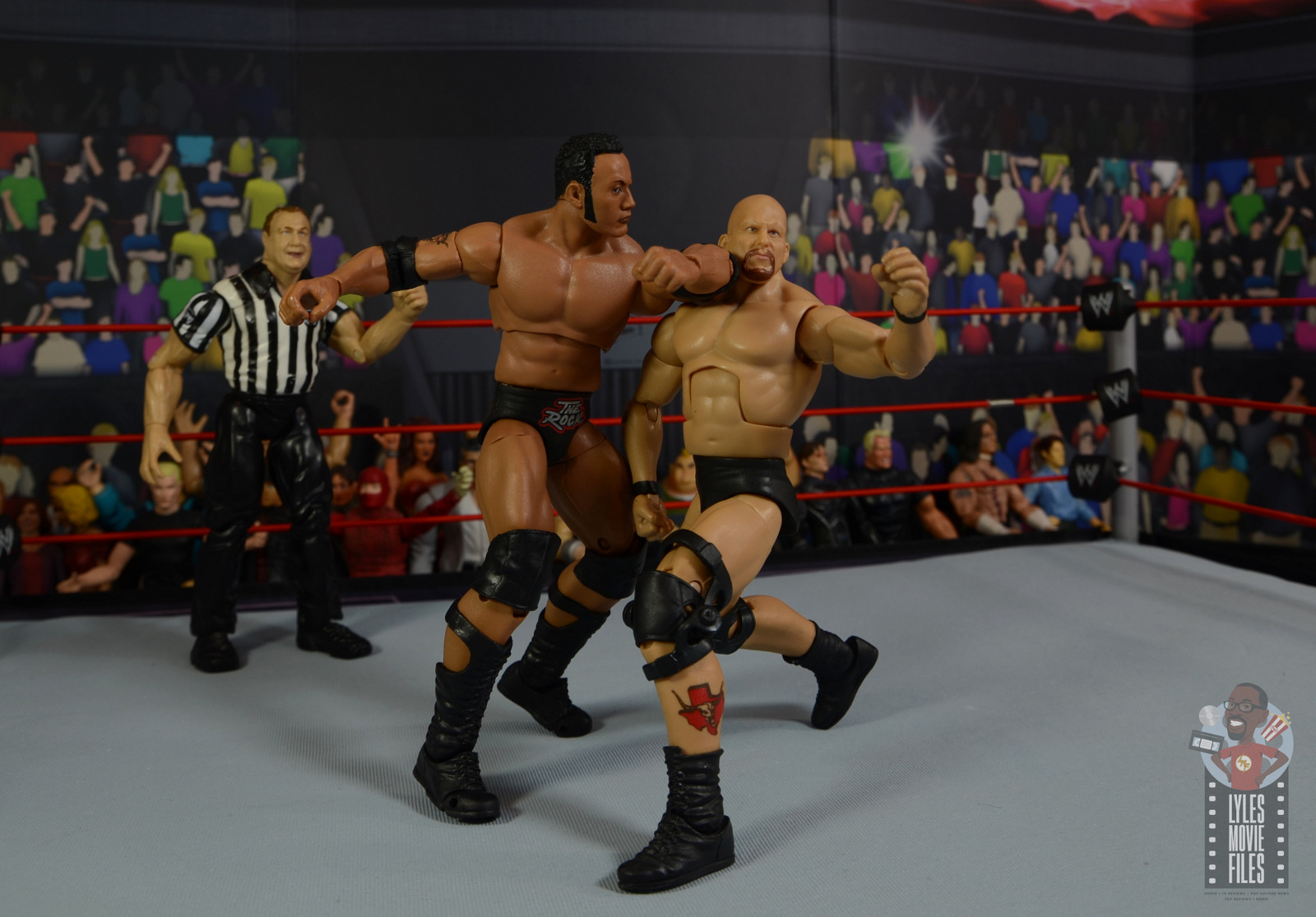 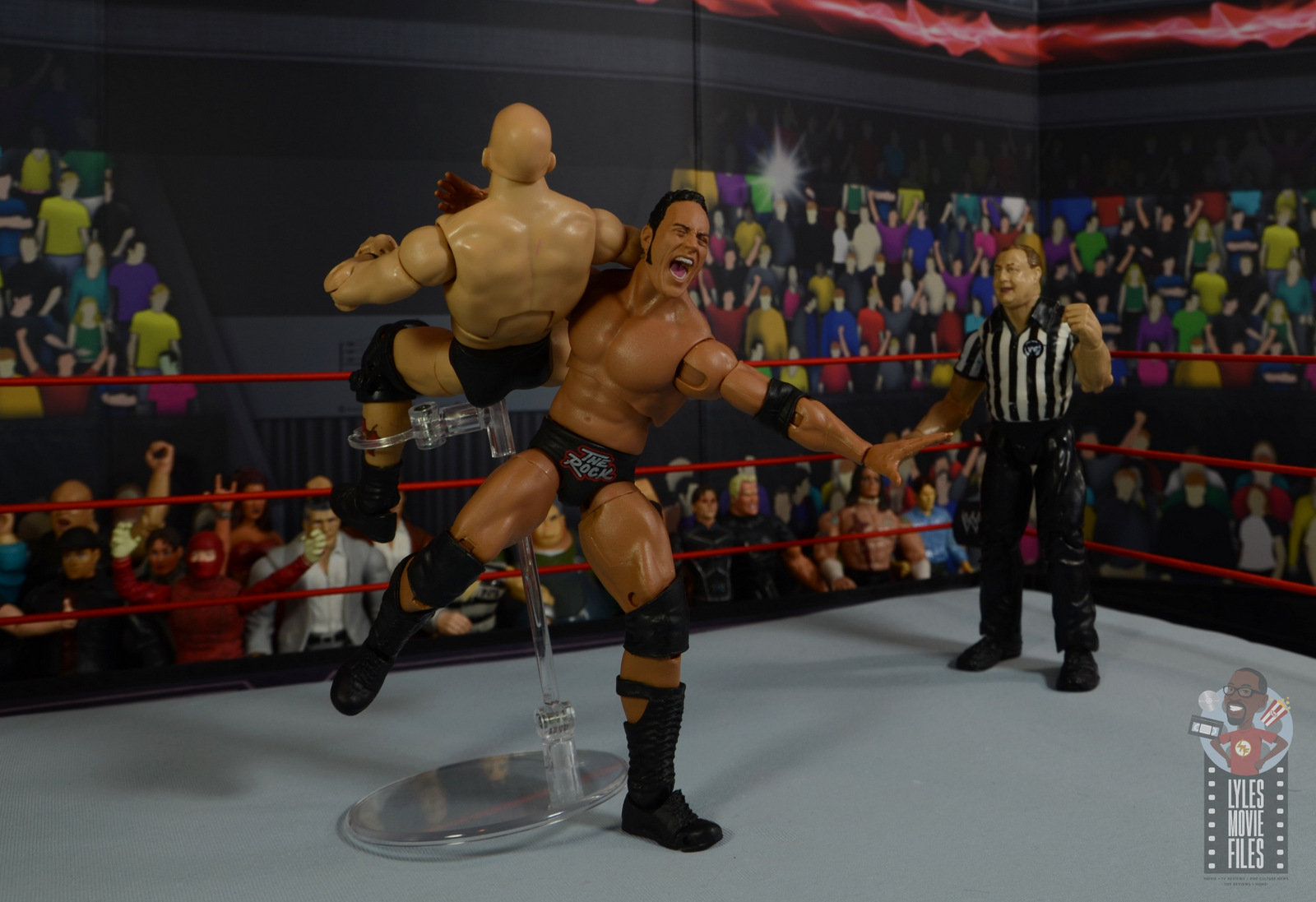 Accessories:  I’ve mentioned the alternate heads, but that’s a huge part of the value here. He also comes with a pair of sunglasses and a microphone. 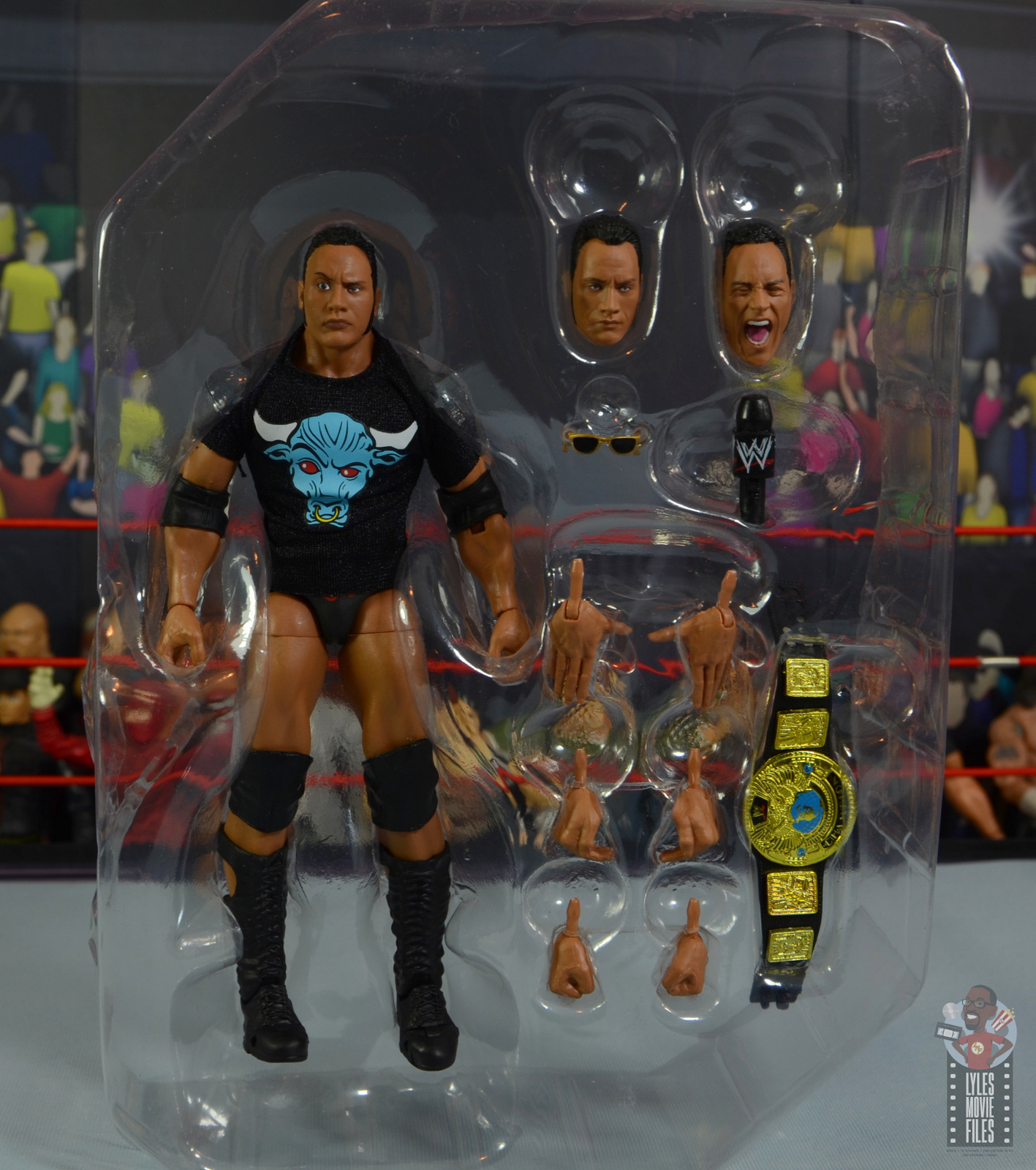 The double jointed elbows make for a more convincing “If you smell….la la laaaal what The Rock…is cooking” pose. 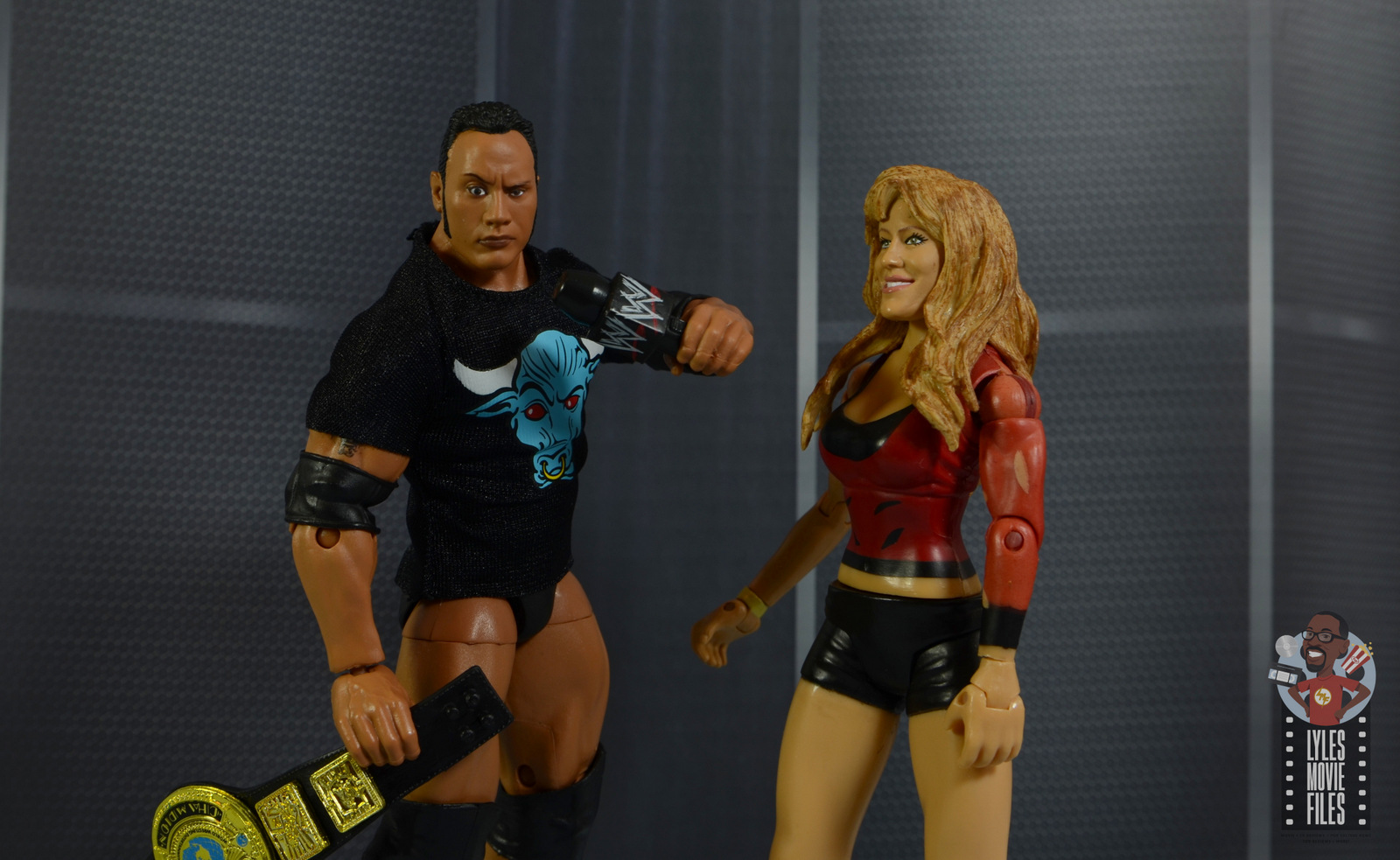 He’s also got three sets of alternate hands — the flat palms perfect for a just bring it pose, a new set of cradling hands and fists. These swap out easily and greatly increase the display options.

Rock gets the standard WWE championship from the Attitude Era. I’ve got about 20 of these so it’s not that big a deal. It’s a nice looking title though despite the lettering being a little off on Champion. 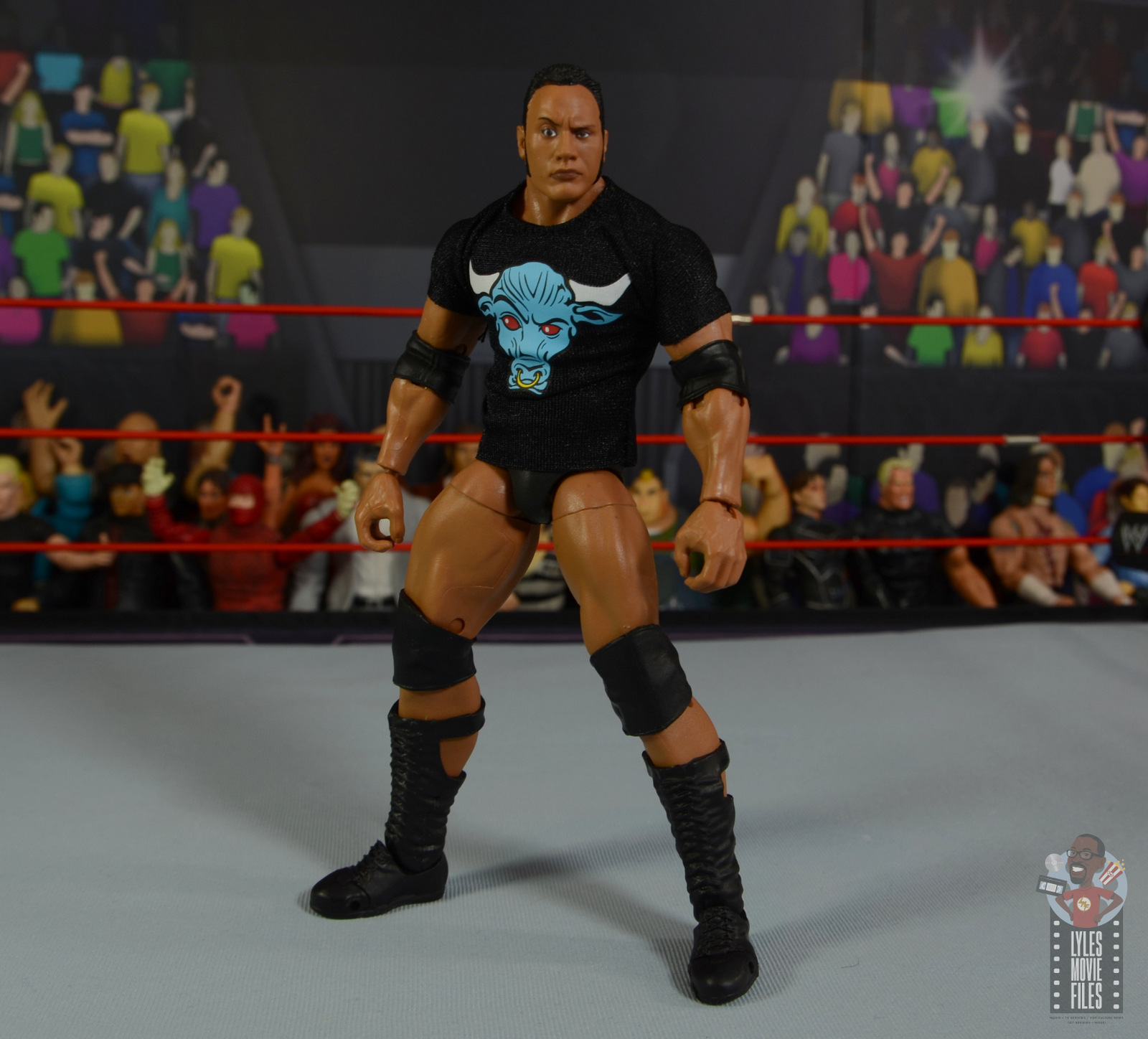 Finally (pause for dramatic effect) The Rock comes with a cloth Brahma Bull T-shirt. This beats my first attempt at this figure where he must have been pranked by Eddie Guerrero.

Worth it?  I got The Rock for the typical Ultimate Edition price of $29. I think the accessories and new portraits warrant the price uptick especially if you missed out on previous editions of The Rock.

The Great One gets a great figure with this Ultimate Edition version. I’m a fan of this line and hopeful 2021 brings in even more legends than Mattel has previously announced. 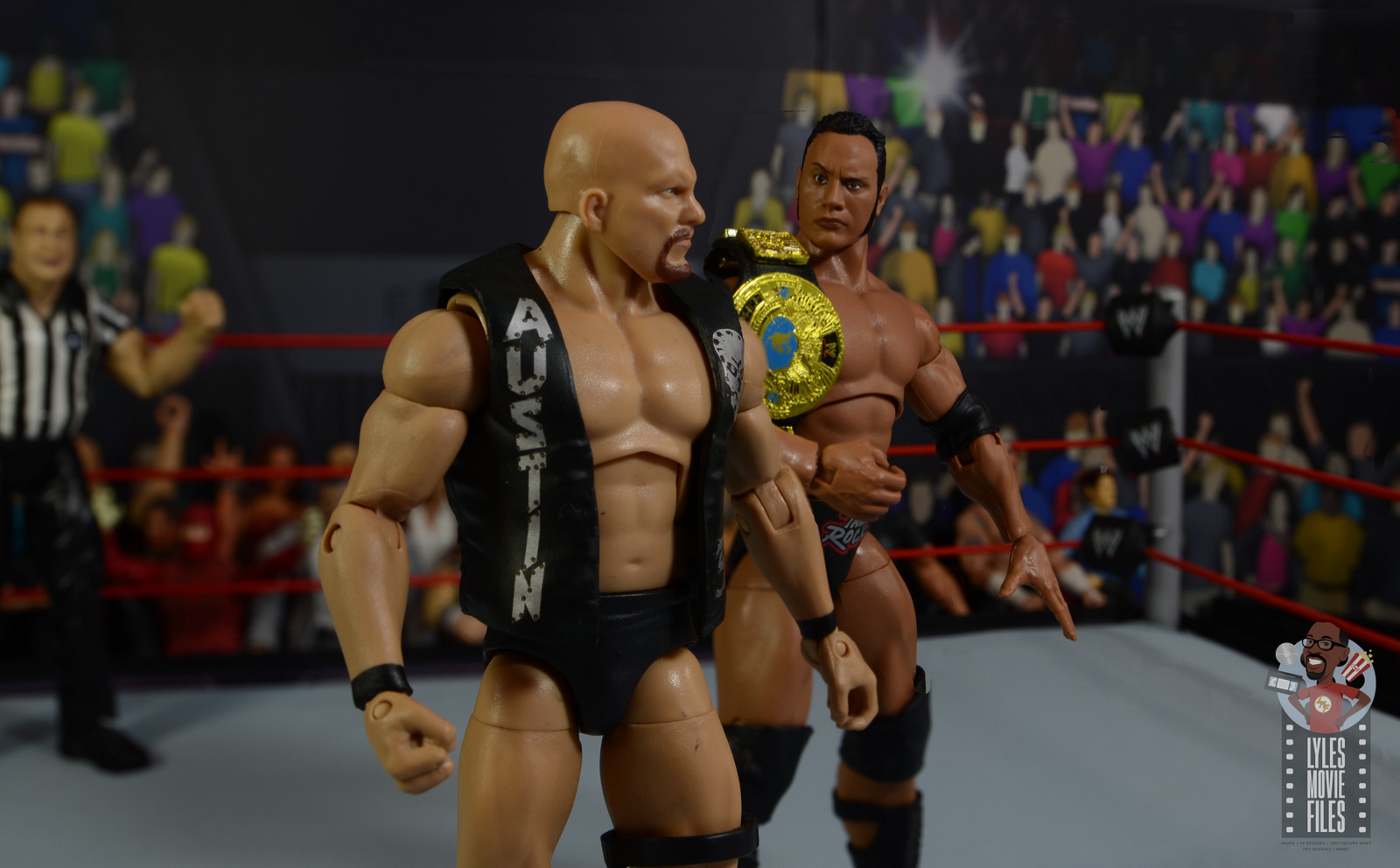 Where to get it?  This wave of Ultimate Edition figures is exclusive to two retailers. Amazon got The Rock, which would normally be a good thing but it appears they’ve sold out for now. Hopefully people will be able to get him later on during the holidays.