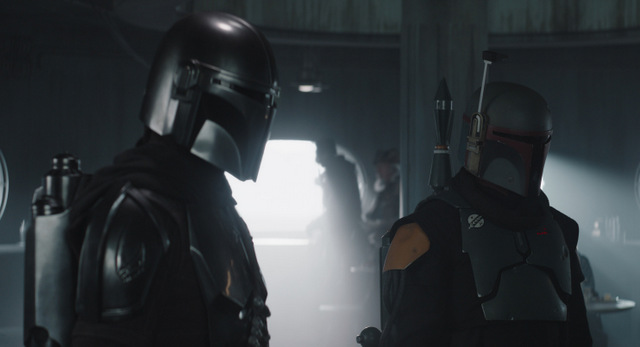 The Mandalorian saved Star Wars and with the appropriately titled, The Rescue, this season pretty much saved 2020 for me.

And any friend or person you might follow on social media that spoils this ending deserves an immediate unfollow. That said I’m about to go on full spoiler mode so PLEASE WATCH it before reading my review.

Alright, let’s get going. Mando and his crew track down a ship transporting Dr. Pershing. Like last time, Dr. Pershing was extremely helpful after Cara Dune killed Nathaniel Malick…sorry, an Imperial Co-pilot played by Thomas E. Sullivan, who annoyed me to no end on Agents of SHIELD’s final season. So we had a mini-AOS reunion here. It took Sullivan all of one minute to make his Imperial officer one of the more irritating characters the show has introduced. He is amazing at making his bad guys the type you want to see get punched in the face repeatedly.

Mando reconnects with Bo-Katan, who only has Koska Reeves with her this time. Understandably there’s some tension with Boba and the true Mandalorian loyalists resulting in Koska hitting a tornado DDT on Boba. The Boss would be proud. Bo-Katan wants her darksaber back from Moff Gideon and agrees to help.

Taking Gideon’s ship won’t be that major a problem since only a minimal amount of Stormtroopers are onboard. The real trouble is the Dark Troopers, droids that essentially have adamantium armor. These aren’t the cheap ones Palpatine rolled out for the Droid Army. This is the good stuff.

As Mando, Cara, Boba Fett, Fennec, Bo-Katan and Koska map out their strategy, it’s amazing just how much The Rescue feels like the culmination of a really good movie.

The plan is simple: Boba attacks the shuttle with everyone else in it so they can sneak aboard Gideon’s ship and Mando waits for the others to unleash a major distraction.

I really have zero patience for any dweeb Neanderthal who wants to complain about The Mandalorian’s all-women Bad Batch sequence. These are some of the coolest characters in the entire mythos so it was a lot of fun watching them go off and obliterate squad after squad of Stormtroopers.

There are legitimate complaints about the Sequel Trilogy women, who were either the absolute best at anything or important because they got killed/nearly killed. That 100% doesn’t apply to any of the characters on The Mandalorian. And that was without even including Ahsoka, who’s right below Leia in terms of best Star Wars character that happens to be a woman.

Everything is going smoothly until Mando fails to stop one Dark Trooper from exiting the sealed room. These guys are basically T-800s and director Peyton Reed treats them like an unstoppable…force. Sorry. Mando uses up all his bag of tricks just to stop one, but at least he was able to send the rest out the airlock into space. Nice move.

Gideon throws another monkeywrench in the plan by having his darksaber pointed at Grogu instead of being on the bridge that Bo-Katan and crew captured. This led to a pretty spectacular fight since the Beskar armor can withstand lightsabers and darksabers. Finally, Mando beats him and happily turns him over to Bo-Katan, but there’s a catch. Bo-Katan can’t take it and assume leadership — she needed to be the one to beat Gideon in combat in order to have the rightful claim to the darksaber. Does this mean Mando is now the leader of the Mandalorians? That’s an interesting direction for Season 3.

Moff Gideon is an actual credible villain and hits the full cocky jerk when Fennec registers some objects crashing through the ray shields. The Dark Troopers that Mando sent into space are coming back to rescue their boss. Reed spent the right amount of time establishing how major a threat just one Dark Trooper was that it was clear this wasn’t going to end well. Instead it was maybe the most awesome moment in Star Wars? I don’t know, we’re gonna have to let the thrill wear off, but I think this was it especially in the context of other installments in the series.

A lone X-wing emerges from hyperspace. Showrunner/writer Jon Favreau kicked off the Marvel Cinematic Universe with Iron Man and it’s crazy to think now that’s only the second greatest accomplishment he’s done. The beauty of this was Favreau introduced X-wings earlier this season — not so coincidentally the previous episode Reed directed — and it wasn’t that absurd to think that Captain Carson Teva or Trapper Wolf wasn’t coming to bail Mando out once again. 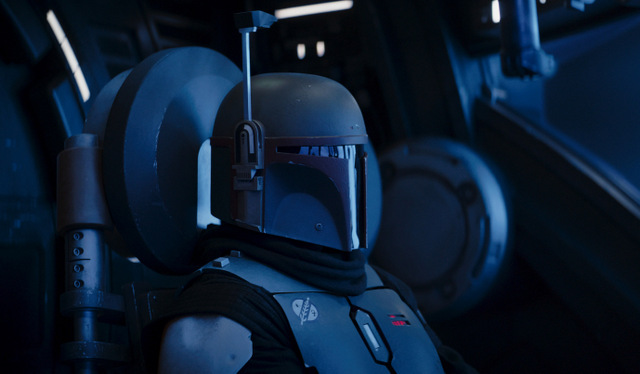 But then the pilot emerged. And he aggressively started tearing through the Dark Troopers…and he’s got a green lightsaber. Quick, what was Ezra using last time in Rebels? Hold on…this Jedi is dressed in all black(!) with one glove? Uhmmm, this would be the cruelest thing ever if this isn’t who I think it is. Almost as cruel as having the galaxy’s hero try to kill his nephew and dying after force projecting himself across the Galaxy. But that’s just crazy talk. Who would be crazy enough to do that???

Now for that moment. One of the best parts about Star Wars is when one sequence mirrors another. Rogue One was an awesome movie, but most people will talk about Darth Vader eviscerating the Rebel troopers as the standout moment. Reed paid homage to that scene in the most fitting manner possible as the green lightsaber decimated the Dark Troopers.

OK, I’m not even gonna try and play cool reviewer. I was literally 6-years-old again bouncing up and down on my couch excitedly yelling “open the door!” and thrill of seeing the hood came down to reveal LUKE SKYWALKER was everything.

In a year we lost Black Panther, The Black Mamba, Boba Fett and even Darth Vader, seeing Luke Skywalker back on screen again was euphoric. The closest I’ve felt this thrilled and ecstatic about something on screen was when Cap yelled “Avengers….Assemble” in Endgame and Endgame is now a distant second.

Luke told Mando that Grogu needed Mando’s permission to go with him. And in a very touching moment, Mando takes off his helmet — so he can look at Grogu with his own eyes (!). The feel goods weren’t done though as R2-D2 rolled in besides Luke and seemed happy to see a Baby Yoda.

Listen, The Mandalorian Season 3 could just be showtunes. The conclusion to this season wraps the Skywalker Saga in a perfect manner. One with hope of a future…and the return of the Jedi. And just to reassure us that the Disney+ wing of Star Wars isn’t going to be start slacking off we get a killer post credit scene.

Back on Tattooine, Bib Fortunate has gone on the Jabba diet. Fennec kills off the remaining guards and Boba strolls in and kills Bib There’s a new ruler of the palace and we’ve got our next arc(?) series(?) with The Book of Boba Fett coming December 2021.

Mando and Grogu have a beautiful sendoff, Boba Fett takes the crown, Cara Dune and co. kick much tail and my favorite movie hero gets restored to his proper glory? Yep, that’s the definition of a scale-breaker if I’ve ever heard of one.