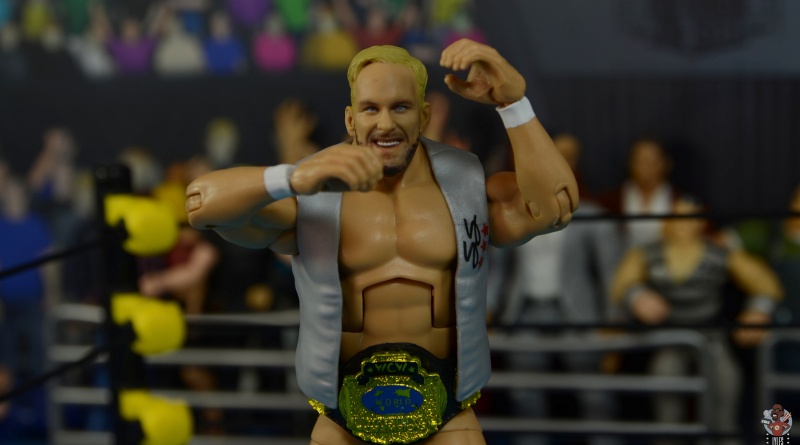 Stunning Steve Austin and Flyin Brian Pillman united to form The Hollywood Blondes, one of the best teams of their era. In vintage WCW fashion, the team was broken up far too quickly, but they had enough memorable matches and moments to still be fondly remembered. And it didn’t help that they had one of the all-time best theme songs ever.

Mattel doesn’t dip into the WCW well nearly as often as I’d like, but Elite Series #81 features Stone Cold from one of his most iconic WCW stints. PS Mattel — I’m still gonna need a Dangerous Alliance era Stunning Steve. Let’s see if this figure is a blockbuster or a wrap.

Packaging: There’s not a big change from the previous Elite packaging with the only difference being a certified authentic sticker and the True FX now adds Life-Like Details on that tab.

Color wise, it’s mostly white and red as opposed to red and black with white accents. And the portrait of the character is on the front as well as the right side.

The left side still features an action shot. Interestingly, this features Austin after he split from Pillman and was running with Col. Rob Parker. The back basically flips the colors from the previous setup with more black than white. I LOVE the attention to detail here with the bio solely referencing Austin’s WCW achievements. 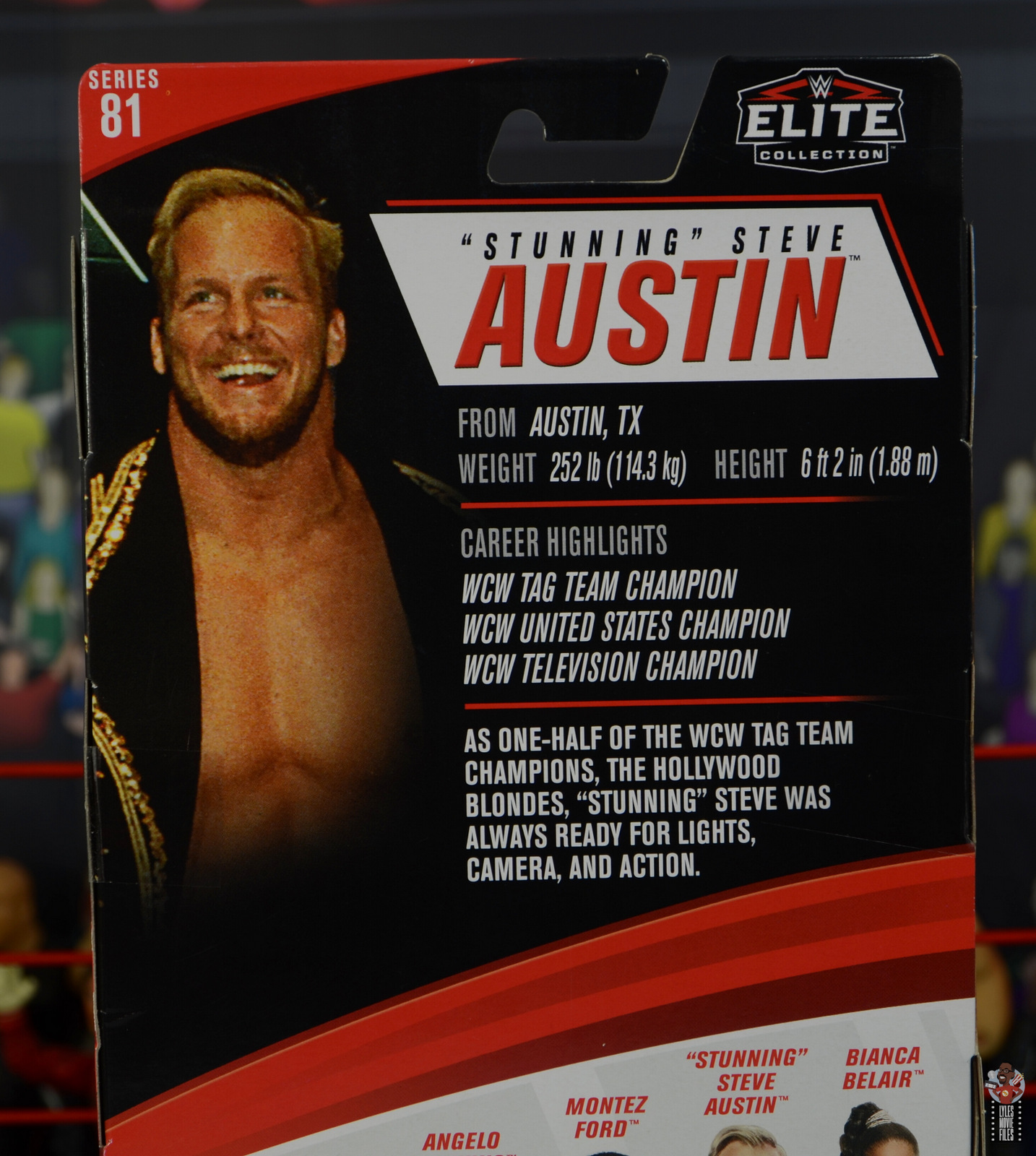 Likeness:  Austin had a brash, cocky smile for most of this time period and the wide smile was a great choice. Mattel’s sculpt really does a nice job of capturing his swept up hair. 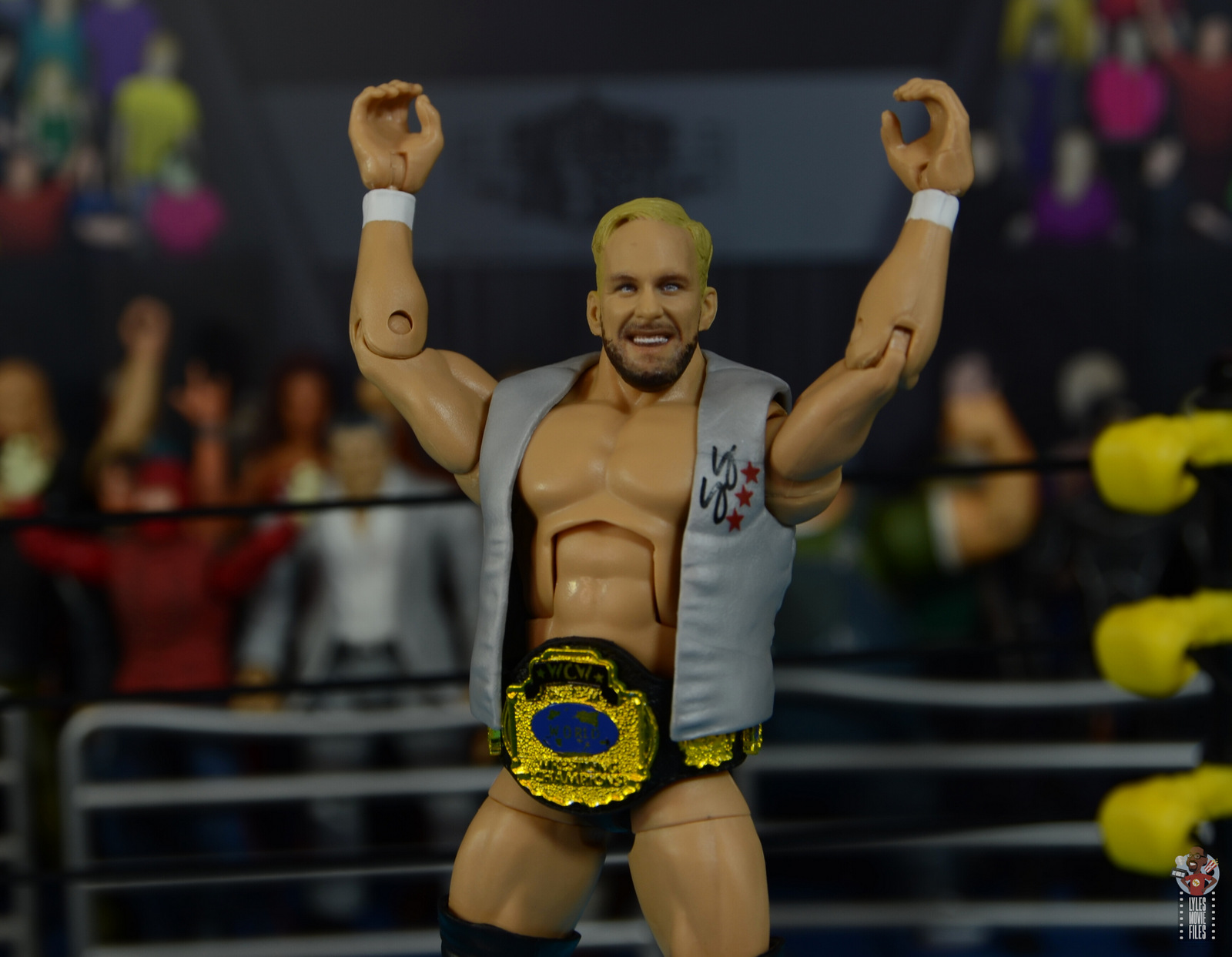 And while this might sound silly, you don’t have to squint too hard to see Stone Cold Steve Austin in this head sculpt. Sometimes younger versions of characters look much different and that’s thankfully not the case here. 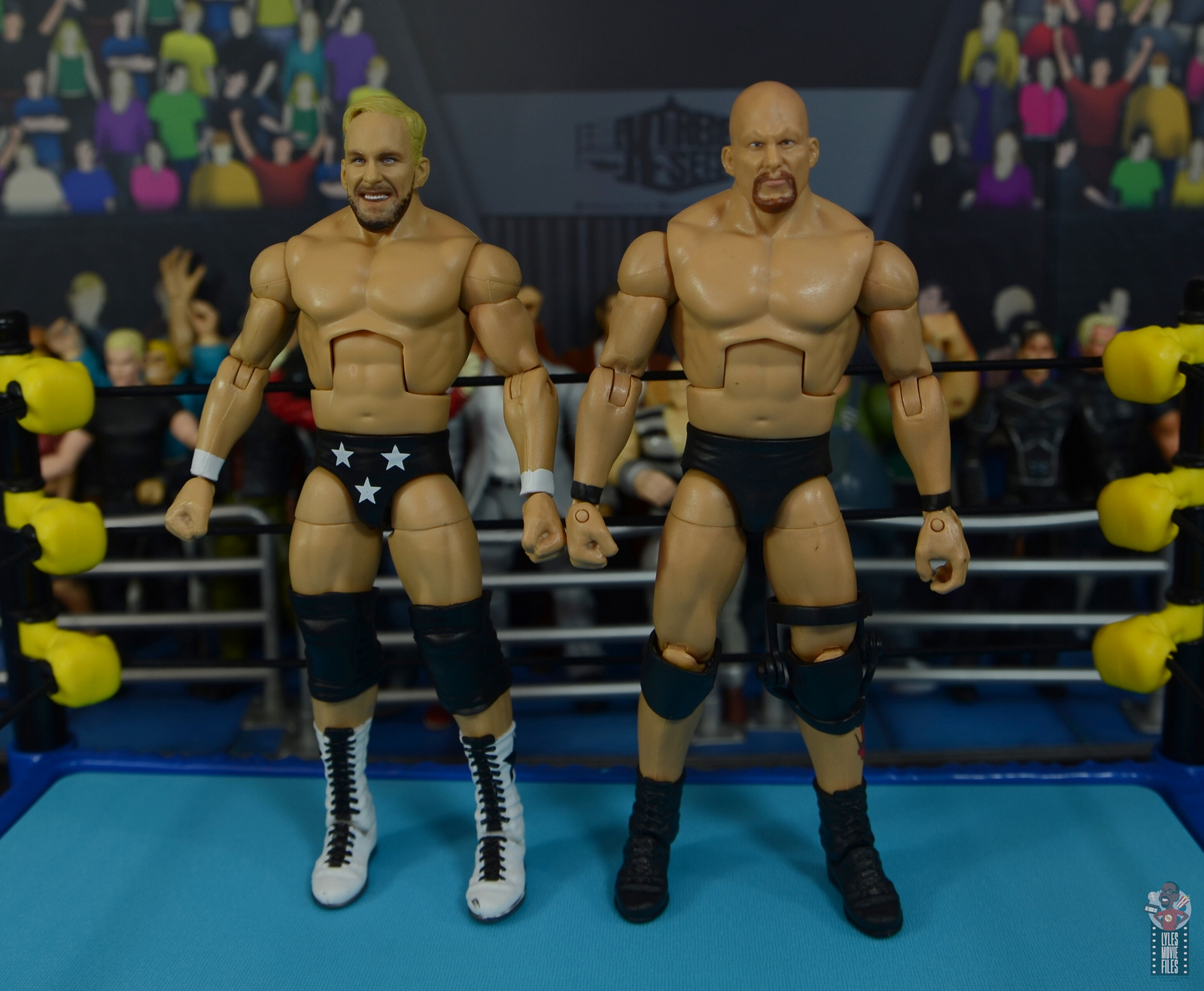 Mattel figured out the right combination of parts for Steve Austin a long time ago with the thicker torso although they probably should have used shorter boots. He definitely has thicker kneepads than Austin wore. I’ll need to find some shorter red or black pads. That would be something I wish Mattel would just include in an accessory pack or as extras for figures. 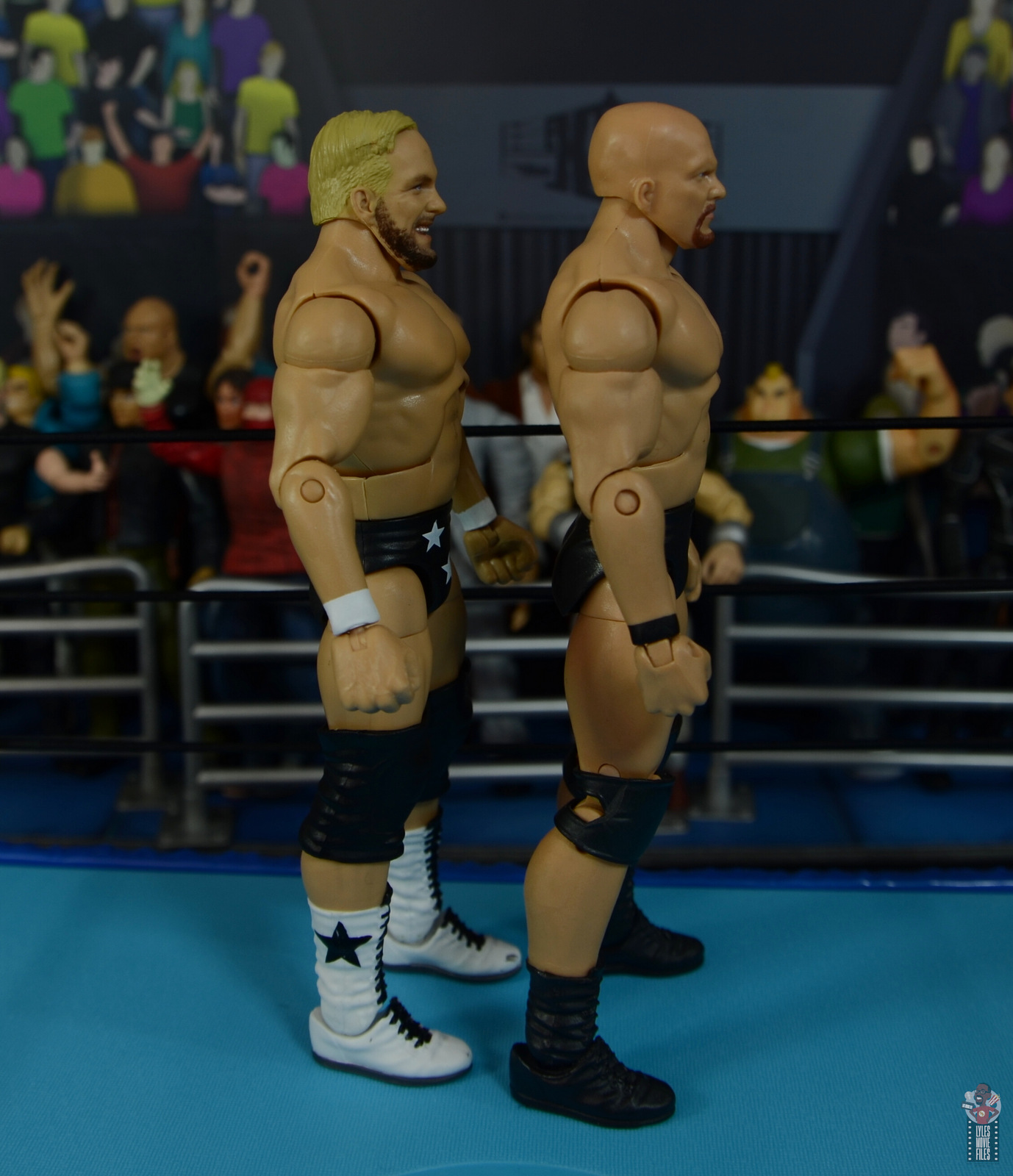 You might need to take some cotton or a small rubber band and place in the neck socket as his head rests a little low on his neck and it helps make him a bit taller.

Scale:  Stunning Steve is 6’2” making him noticeably taller than his 5’11” partner. Austin is about the same height as Pillman, which means you will need to find some shorter knees/boots to get the scale right in case you were planning to buy another Austin to make the Hollywood Blondes. 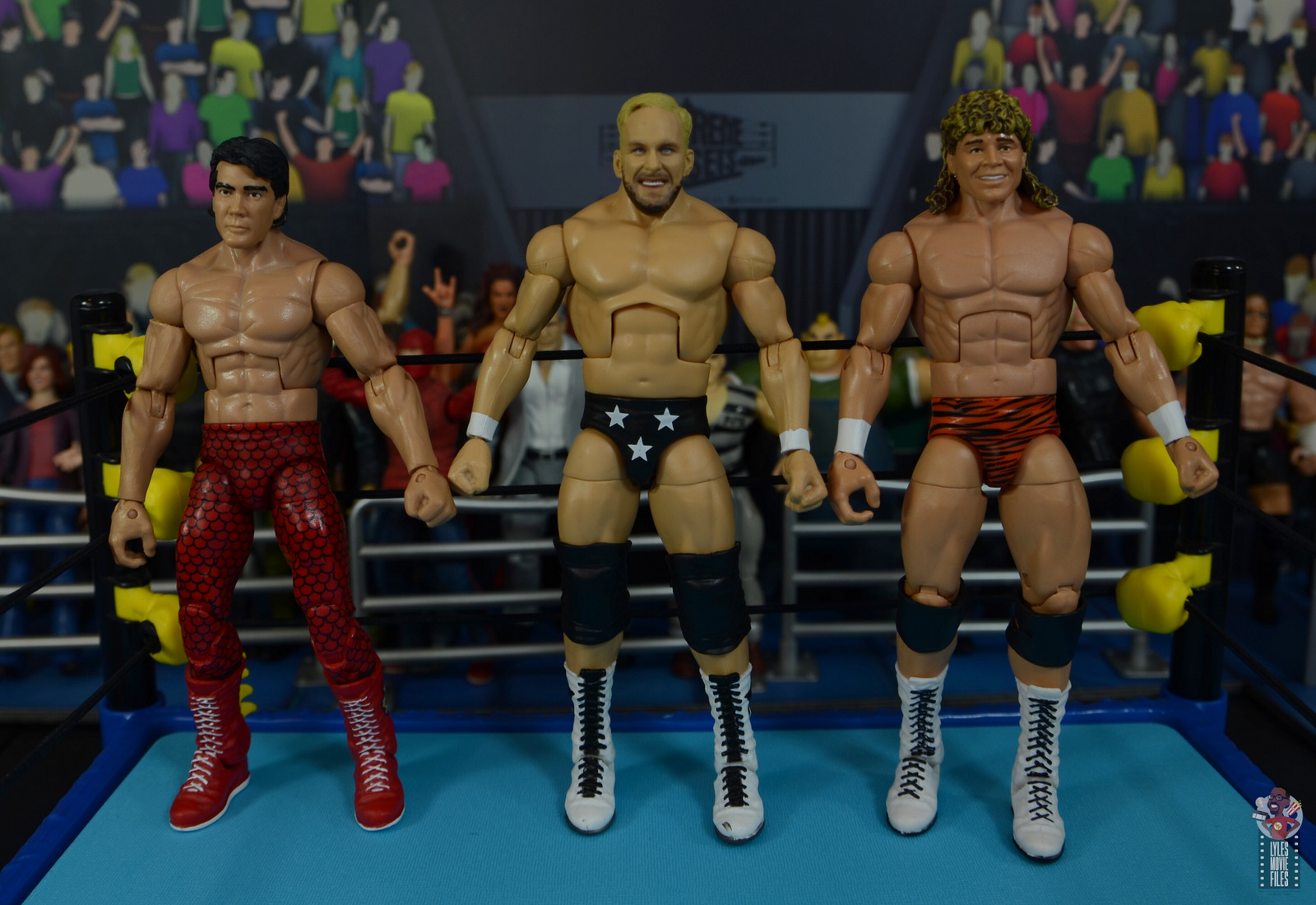 He’s just a bit taller than the 6’1” Arn Anderson and I guess we should keep waiting on that Elite Paul Roma…. 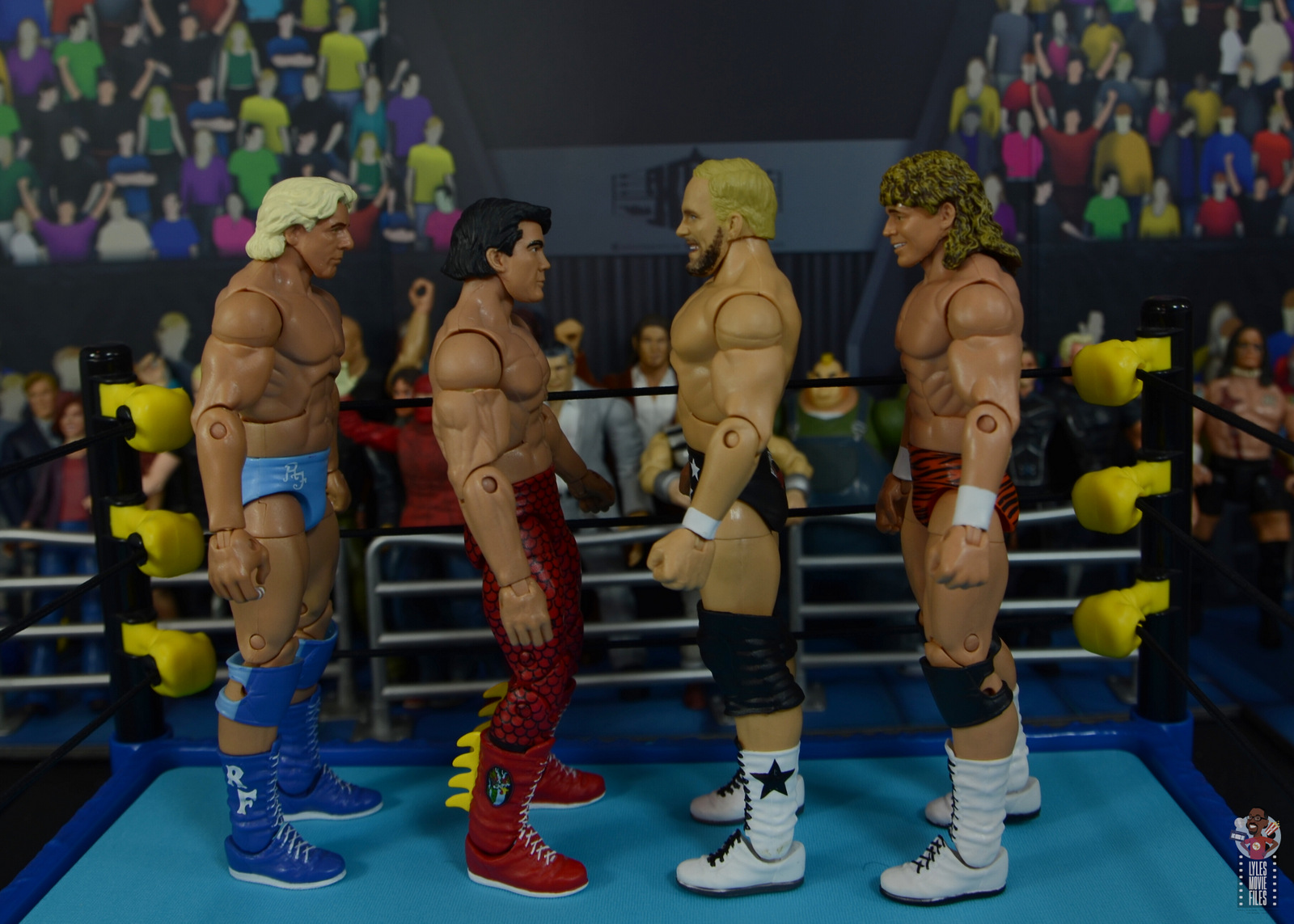 Paint:  The face printing technique works best for figures with stubble, but not a full out beard. Austin’s facial hair looks great and the shade of blonde used for his hair turned out nice as well.

The stars on his tights and boots also didn’t have any issue as I’d expect from Mattel although there was a little scuff on the boots.

Articulation:  Stunning Steve was an athletic brawler meaning he preferred to slug it out with his opponents, but could also outwrestle them if needed. That said, the Elite body doesn’t have many problems in terms of pulling off his move set including the stun gun. 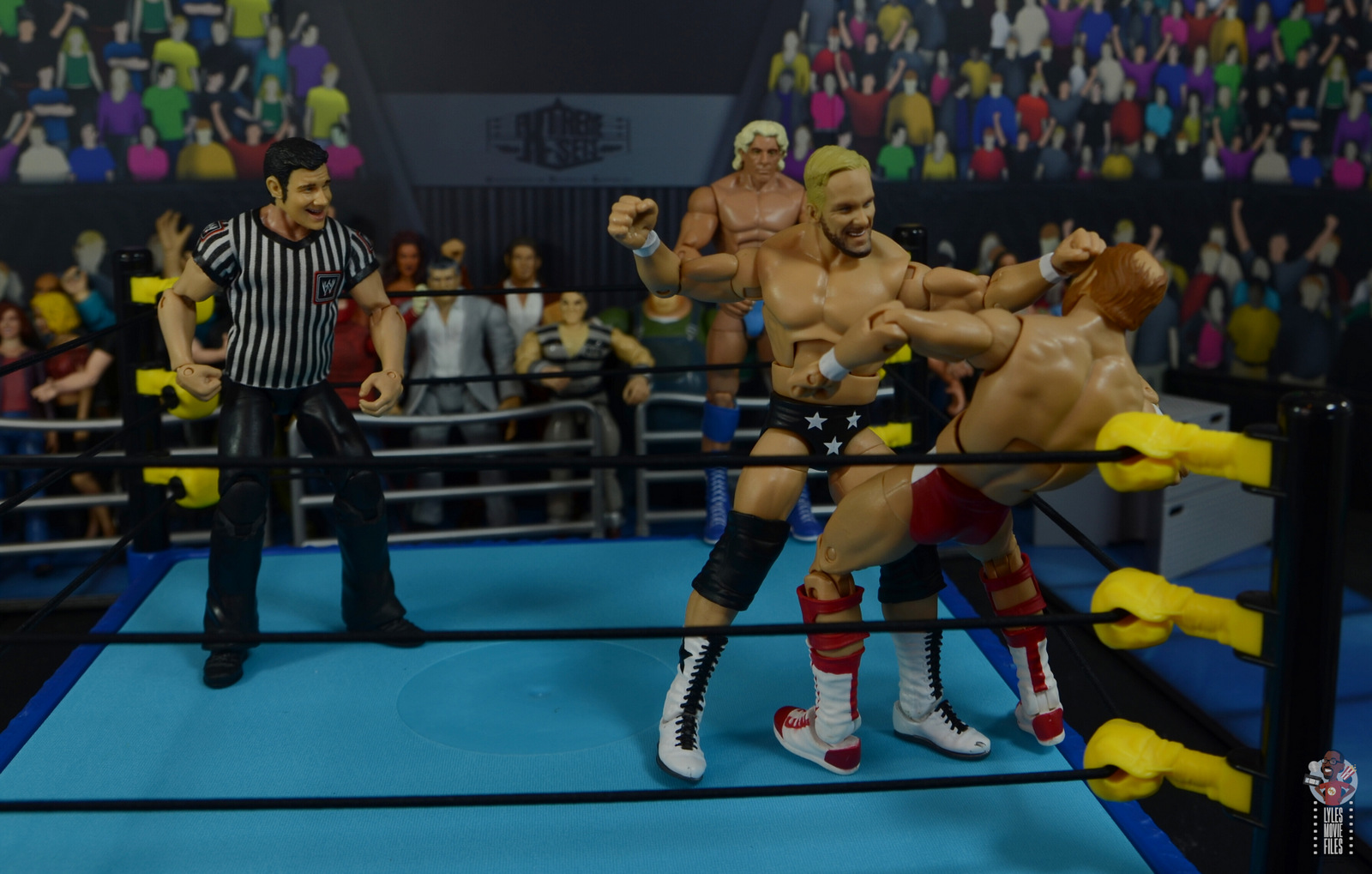 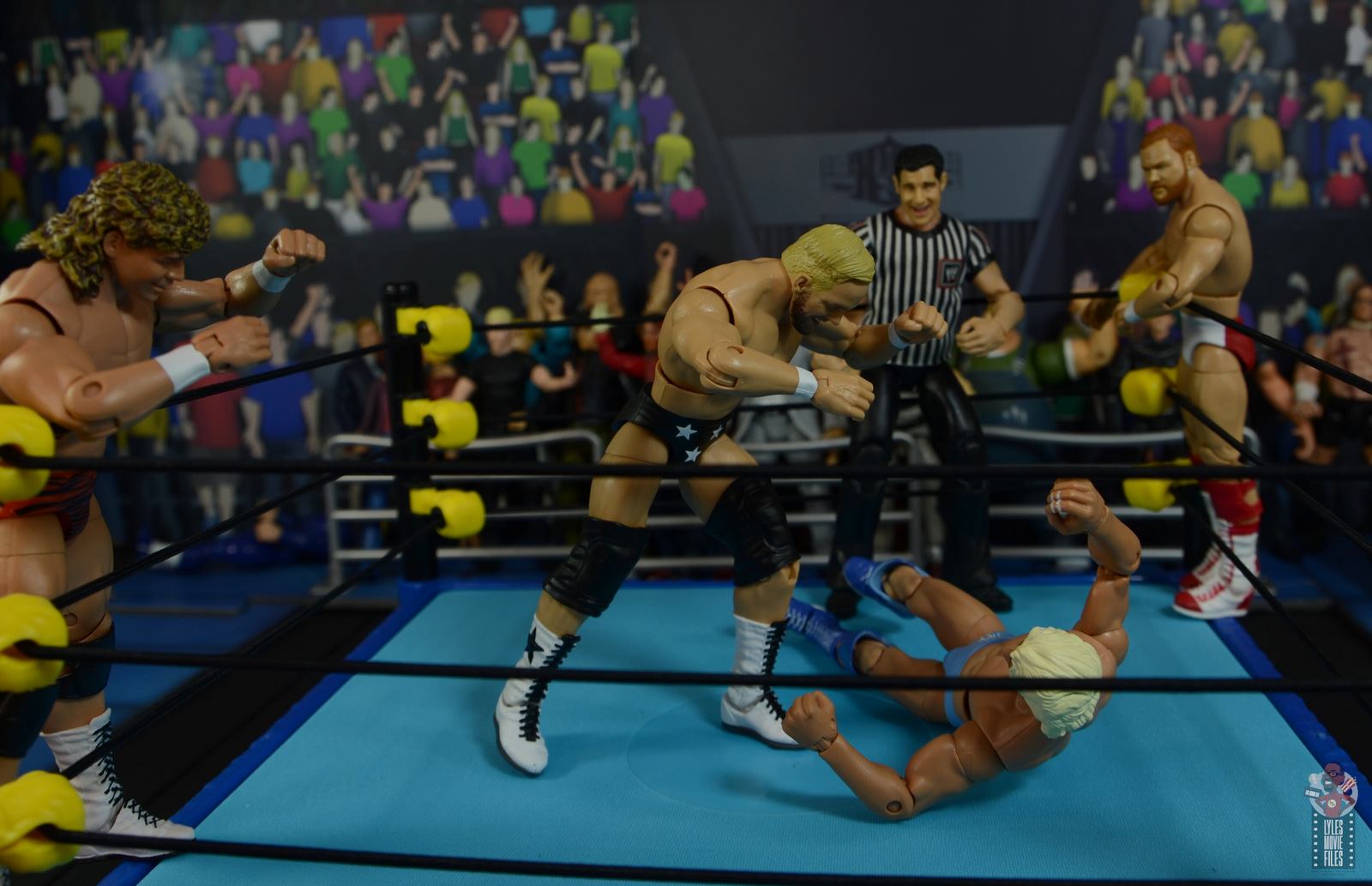 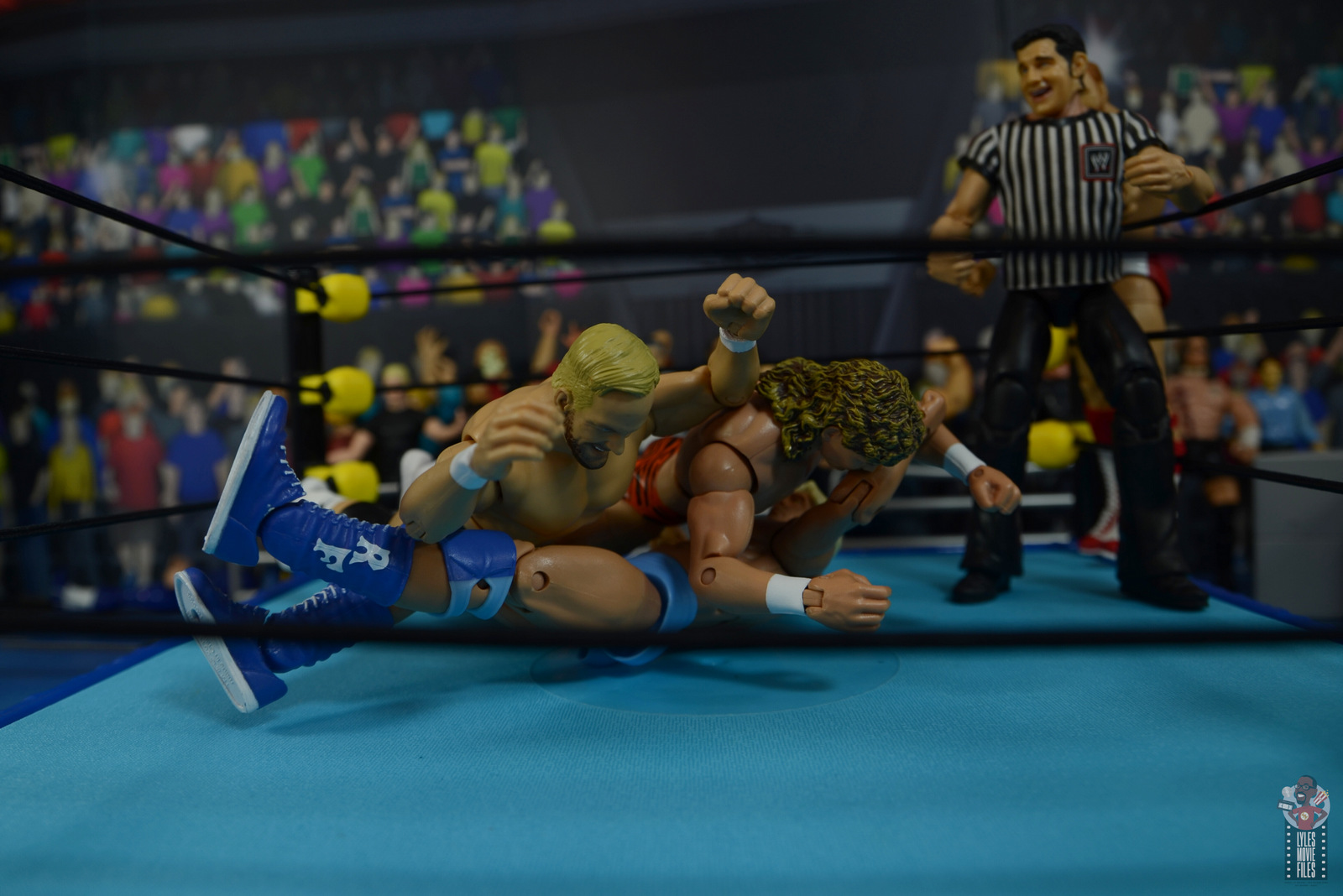 Accessories:  Stunning Steve comes with a first in the line new accessory with the WCW tag team title. 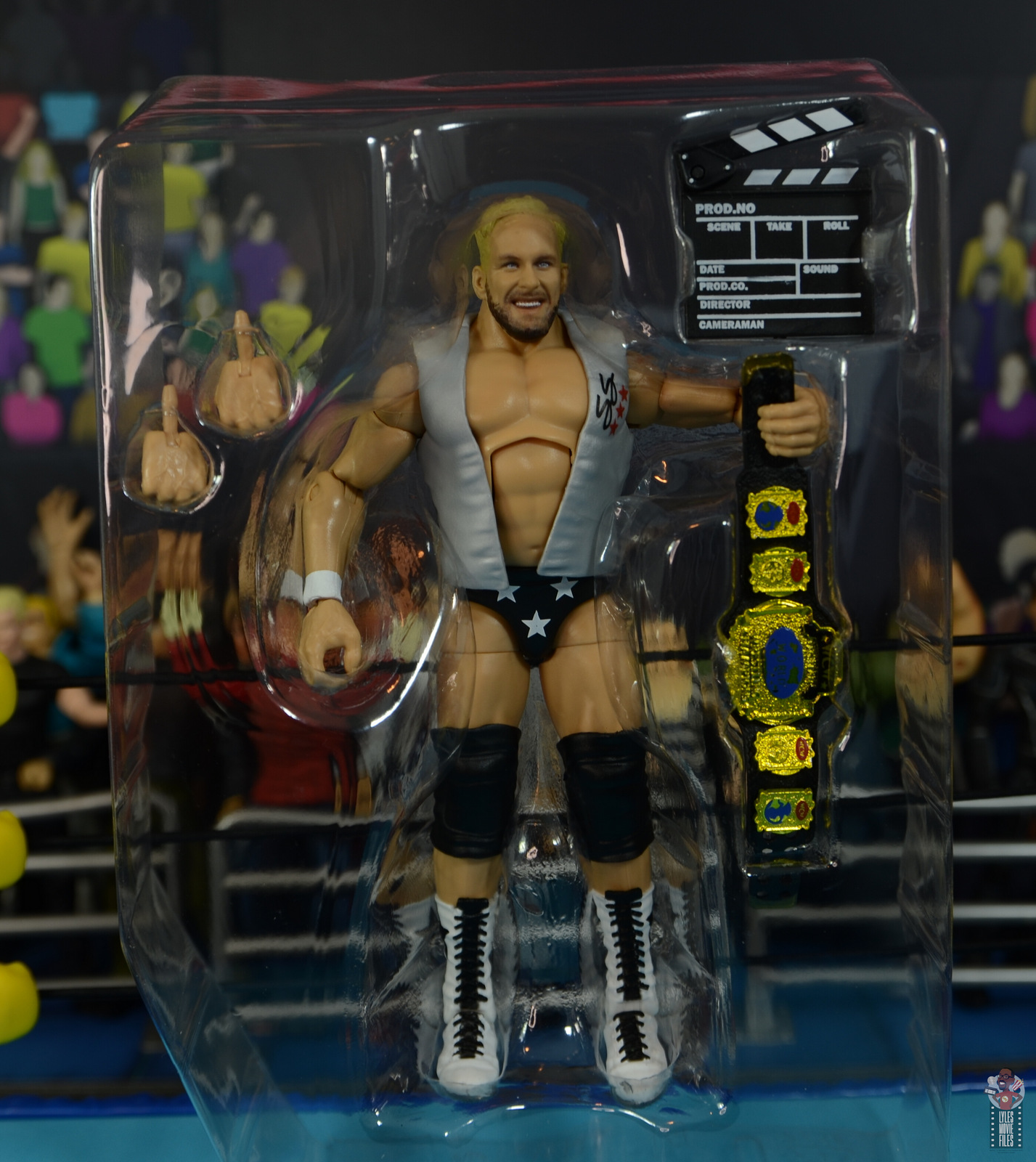 I had to check with some reference shots, but the title is accurate and looks really good. Now there’s another reason to get multiple figures. 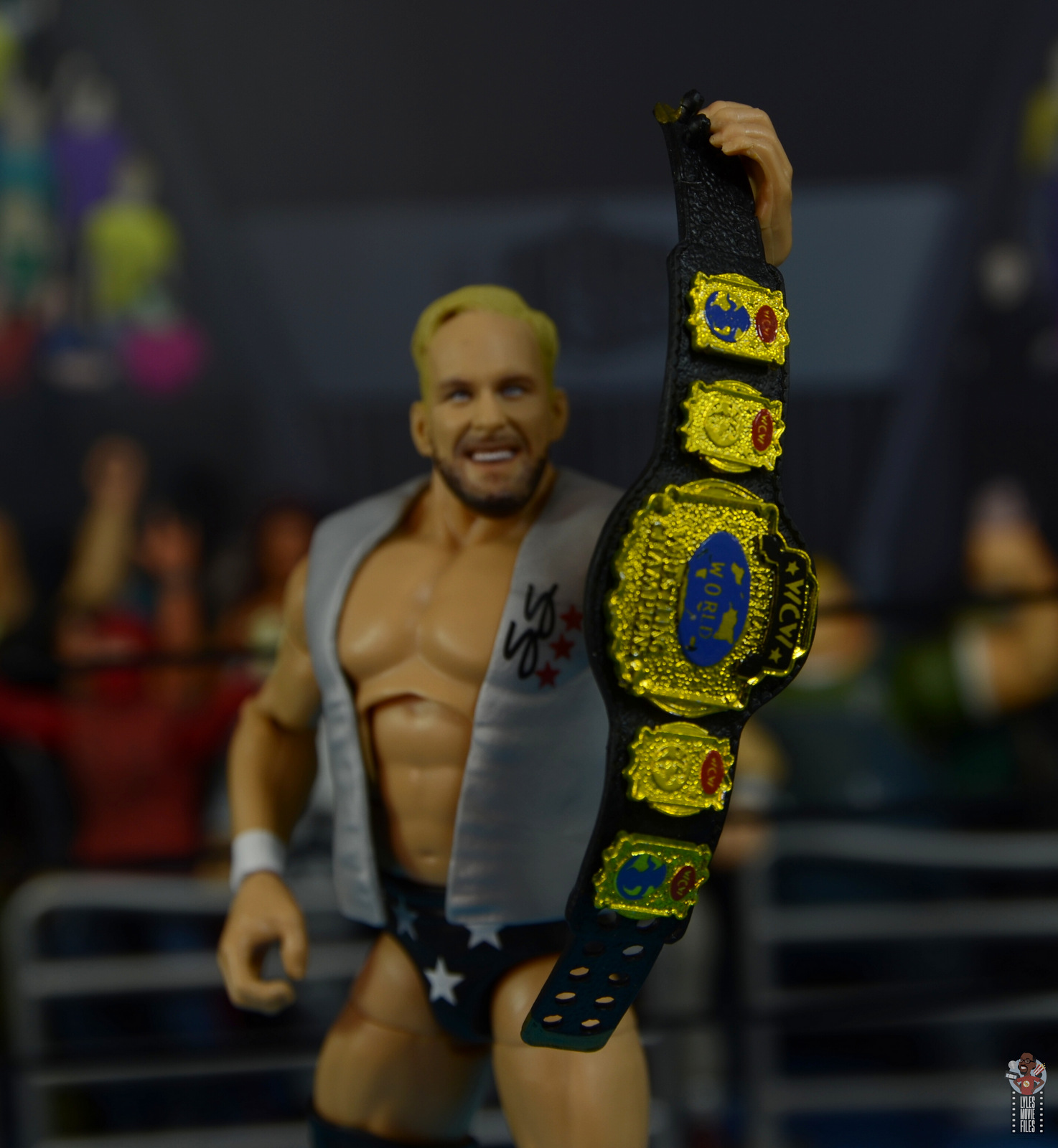 Additionally he gets the clapper board the Blondes would come out to ringside to start scene before they dismantled their opponents. This is a fun, unique accessory that might even get some repurposed use with my Golddust figure.

And of course he has his entrance vest, which looks good and has all the expected details like his initials.

Finally, he’s got a pair of swappable fists.

With better kneepads and more accurate shorter boots this would have been the definitive Hollywood Blondes era Austin. It’s close enough to make it a worthwhile figure in my collection. Hopefully, we’ll get a matching Flyin Brian. 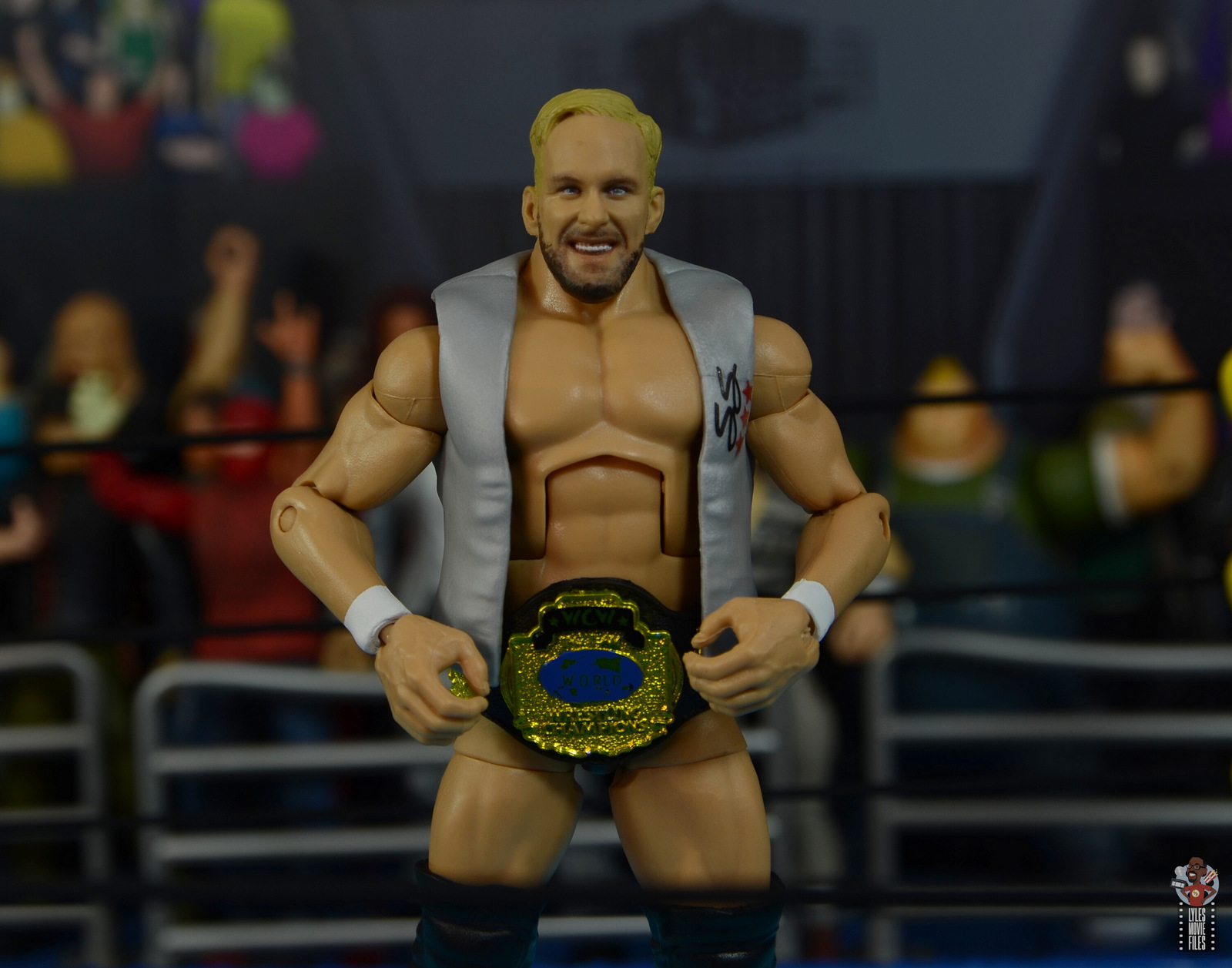 Where to get it?  I got him from Entertainment Earth, which got Elite 81 in earlier than late January. Amazon has some of this wave in stock, but keep an eye out for Austin to reach regular retail price.