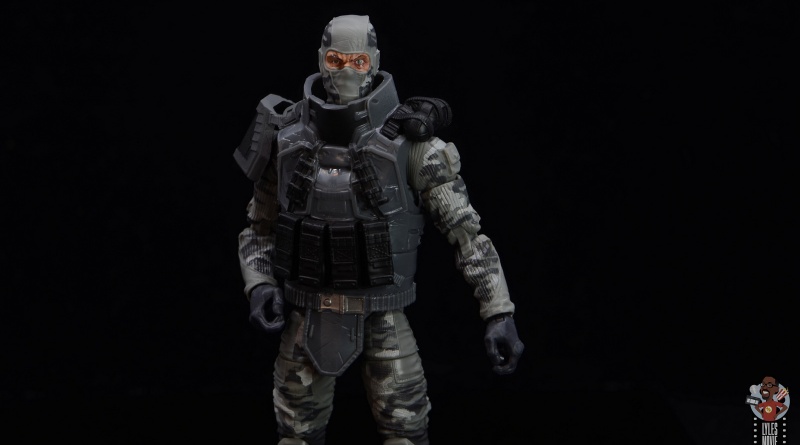 Firefly has always been one of my favorite members of Cobra’s on-call mercenary staff. His blue and grey camouflage was so unique and the balaclava mask just made him look incredibly sinister.

His release in the third wave of G.I. Joe: A Real American Hero alongside Storm Shadow, Scrap Iron and Zartan ensured that Cobra won that round of new figures. And Larry Hama featured him in some excellent stories back in the day including when he and Destro bombed Snake Eyes’ cabin in the woods. 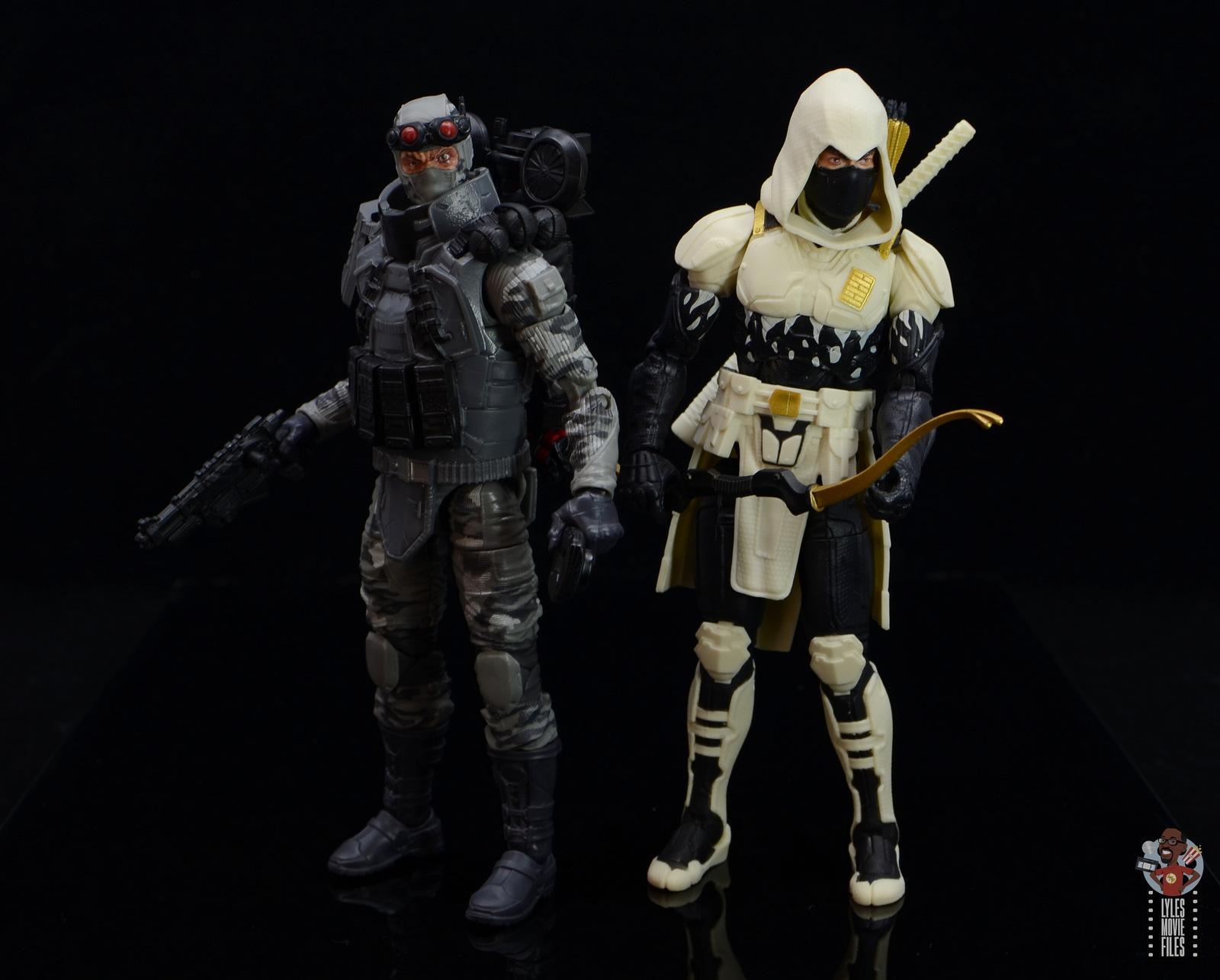 When the Hasbro team revealed Firefly was getting the Classified Series treatment and proceeded to show off the prototype I knew he was going to be a Day 1 purchase. Of course, Hasbro’s decision to release him in the second wave of Target’s Special Mission Cobra Island exclusive wave meant he was going to be a nightmare to actually find on shelves. While I didn’t find him on Jan. 1, a few Target stops later on Jan. 2 paid off and Firefly has now joined the ranks of my Classified Series Cobra figures. Let’s see if Hasbro delivered or blew it with this update.

Package:  There’s no big change for the Cobra Island figures compared to the main line save the small tag on the front. As usual, the front/side art is incredible as it features Firefly unleashing more chaos with his drones after a big explosion. I really think Hasbro ought to consider releasing posters of this package art.

Firefly’s four-star specialties are Covert Ops, Classified and Sabotage. He gets a three-star for explosives, which seems odd for the explosives expert.

Firefly is undetectable, but his work is unmistakable. The Cobra Covert Ops agent is a faceless master who operates without leaving a physical trail or digital footprint. In and out without a trace, the anonymity of his destruction serves as his calling card. He trained as ninja, mastering skills like stealth and infiltration before turning to demolitions and sabotage. He operates as the loudest silent ninja in the world, and even in the blinding blaze of his carefully crafted explosions, Firefly manages to remain hidden in the shadows.

That’s an awesome write-up, with nods to his fleshed out back story from the comics. Hama would be proud. 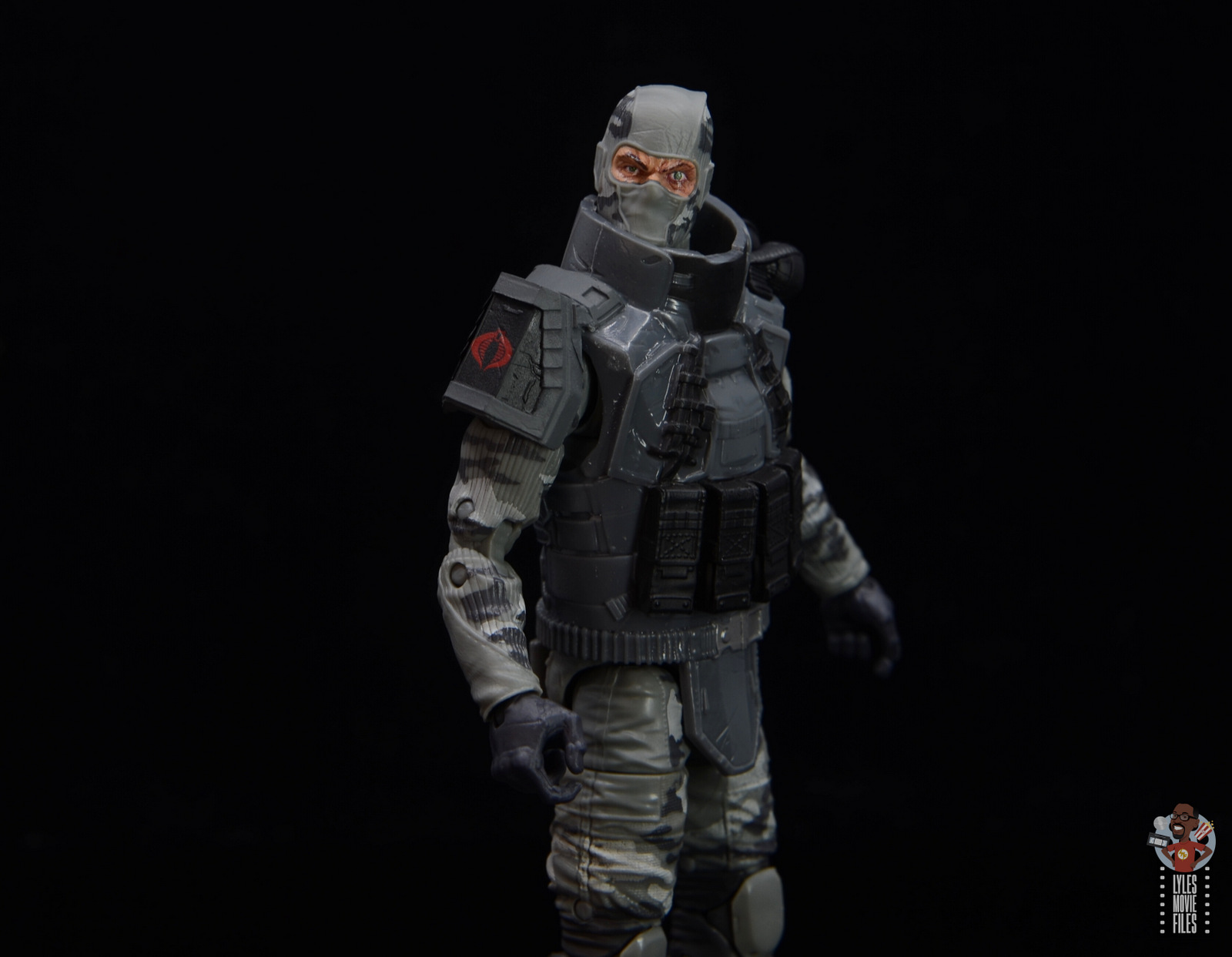 Likeness: Part of the fun with the Classified Series line is seeing how the designers interpret classic look for modern times. Some, like Destro, Beach Head and Snake Eyes, have been ideal updates. Others like Scarlet and Roadblock suffer more from having too many design elements and colors.

The design team decided to play up on Firefly’s demolition/explosives fixation by giving him a protective vest. Just like the first Real American Hero figure, this design also makes Firefly extremely vulnerable to a crack shot as opposed to grenades this vest has C4 explosives attached. 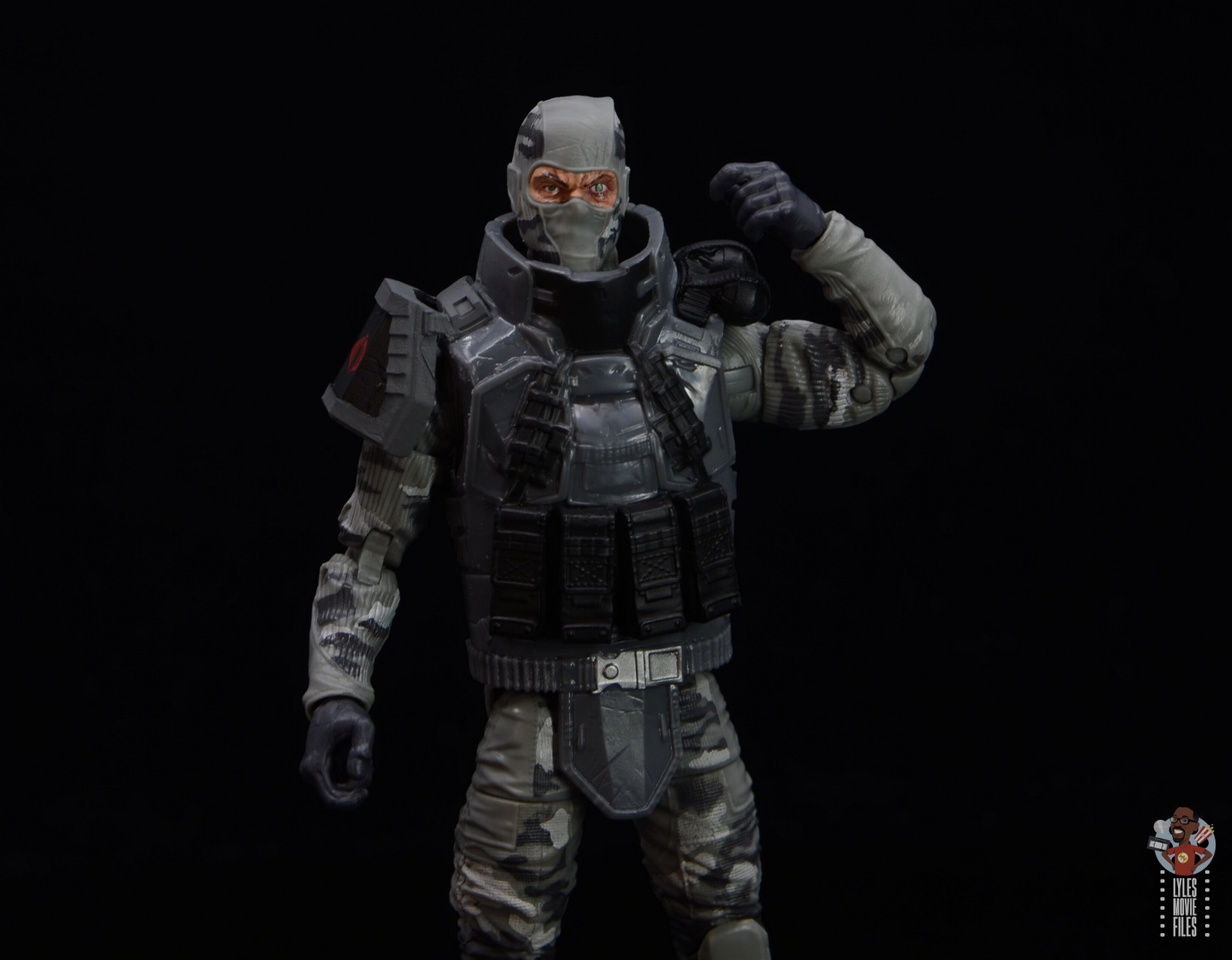 In a nice nod to the original figure, the vest has some grenades positioned on the left shoulder. I like the design of the vest as it’s a sensible addition for someone who spends so much time around explosives. There’s some wear and tear on the vest as well with some cuts that I’ll imagine is Snake Eyes handiwork as he stops Firefly from detonating something. 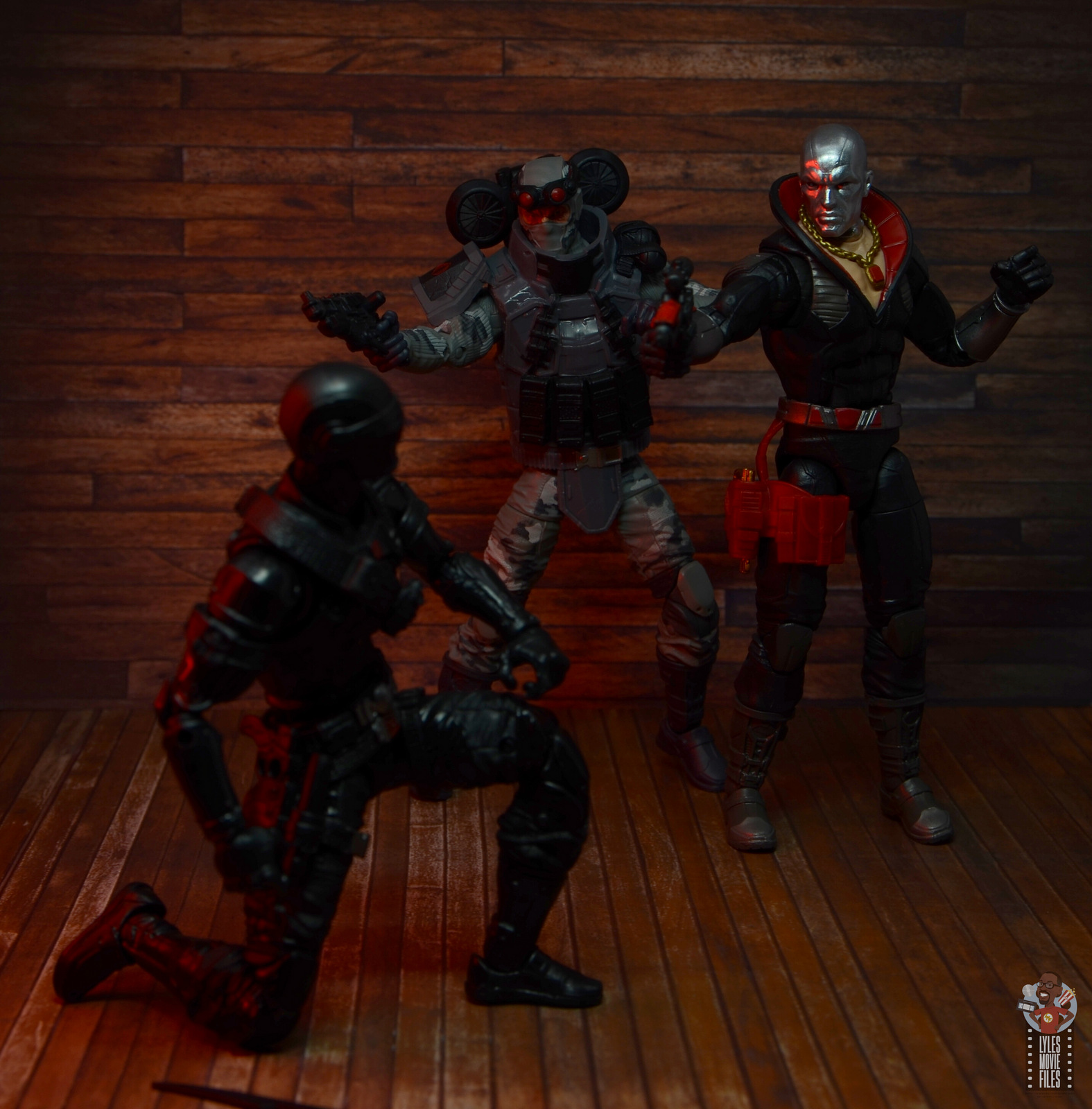 Firefly’s head sculpt is awesome. It features the balaclava mask, but amps up his expression from peaceful and serene to a far more intense/half-crazed look. He’s got some scars around his face like a bomb went off he wasn’t expecting and the left eye is open wider like he’s pissed Scarlet and Snake Eyes have come to ruin his fun. 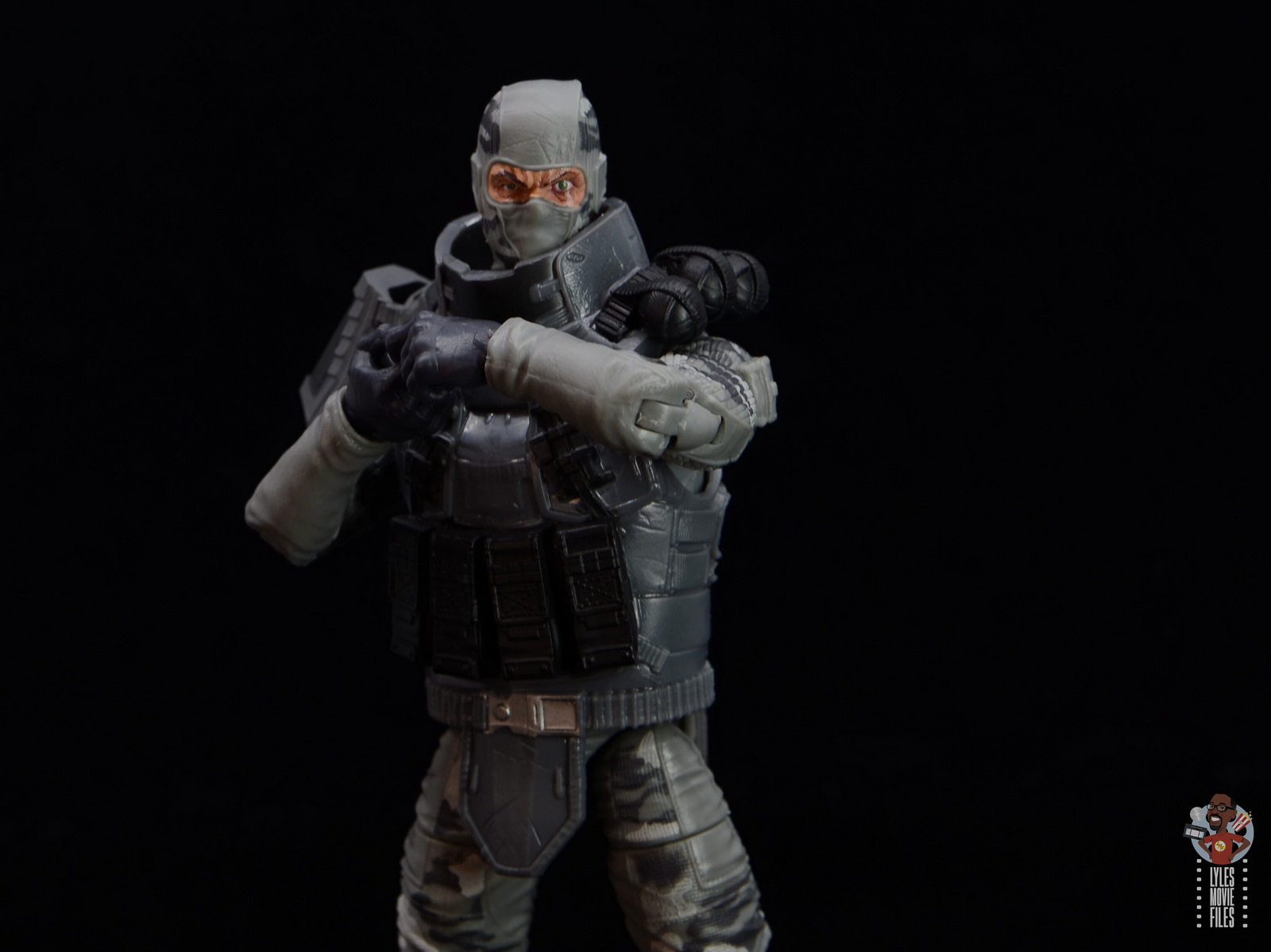 The rest of the figure is very much in keeping with expectations for a classic Firefly in the 6-inch format. As you’d expect, a lot of the base body is the Beach Head figure that ironically was also a Cobra Island exclusive figure. That’s just smart reuse and not something I find a shortcut.

His kneepads and boots are reused from the Snake Eyes/Red Ninja and Destro respectively. Hasbro is building up a nice library of parts and switching them out for various figures is a smart approach instead of wholesale reusing one entire figure. 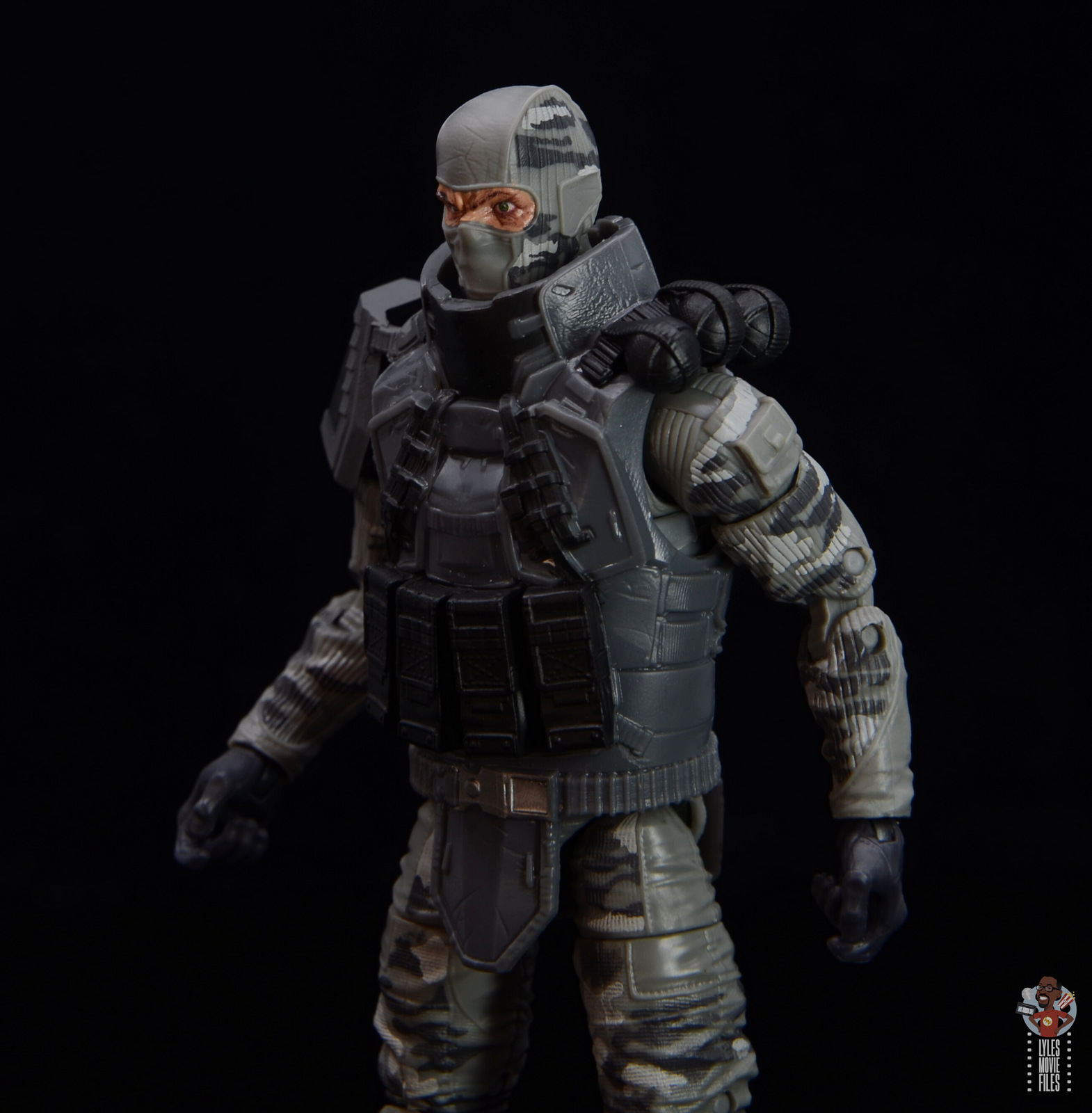 In keeping with the rest of the line, all of his outfit has some textured elements and his balaclava has some nicks and scrapes as well. 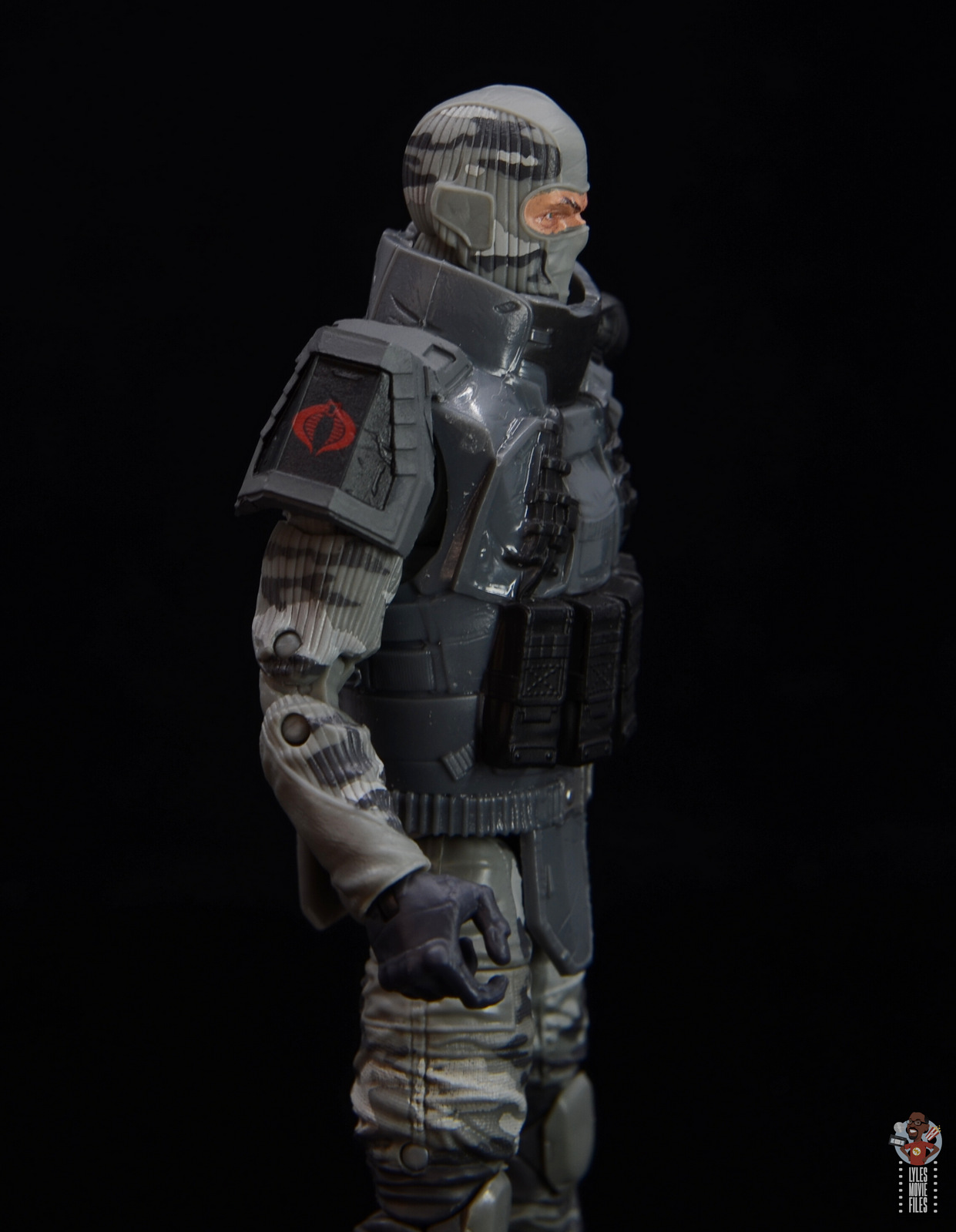 Paint:  Firefly has had some cool alternate looks over the years, but his iconic color scheme is used here and that was the only choice IMO.

Beach Head didn’t get as much camouflage as I’d like, but with Firefly and the upcoming Flint, Hasbro seems to have worked through that issue as the camo pattern is prominent and looks good.

The precision work for the scarring on his face is excellent and the smaller details like the blacks on the vest and the silver belt buckle all look sharp. 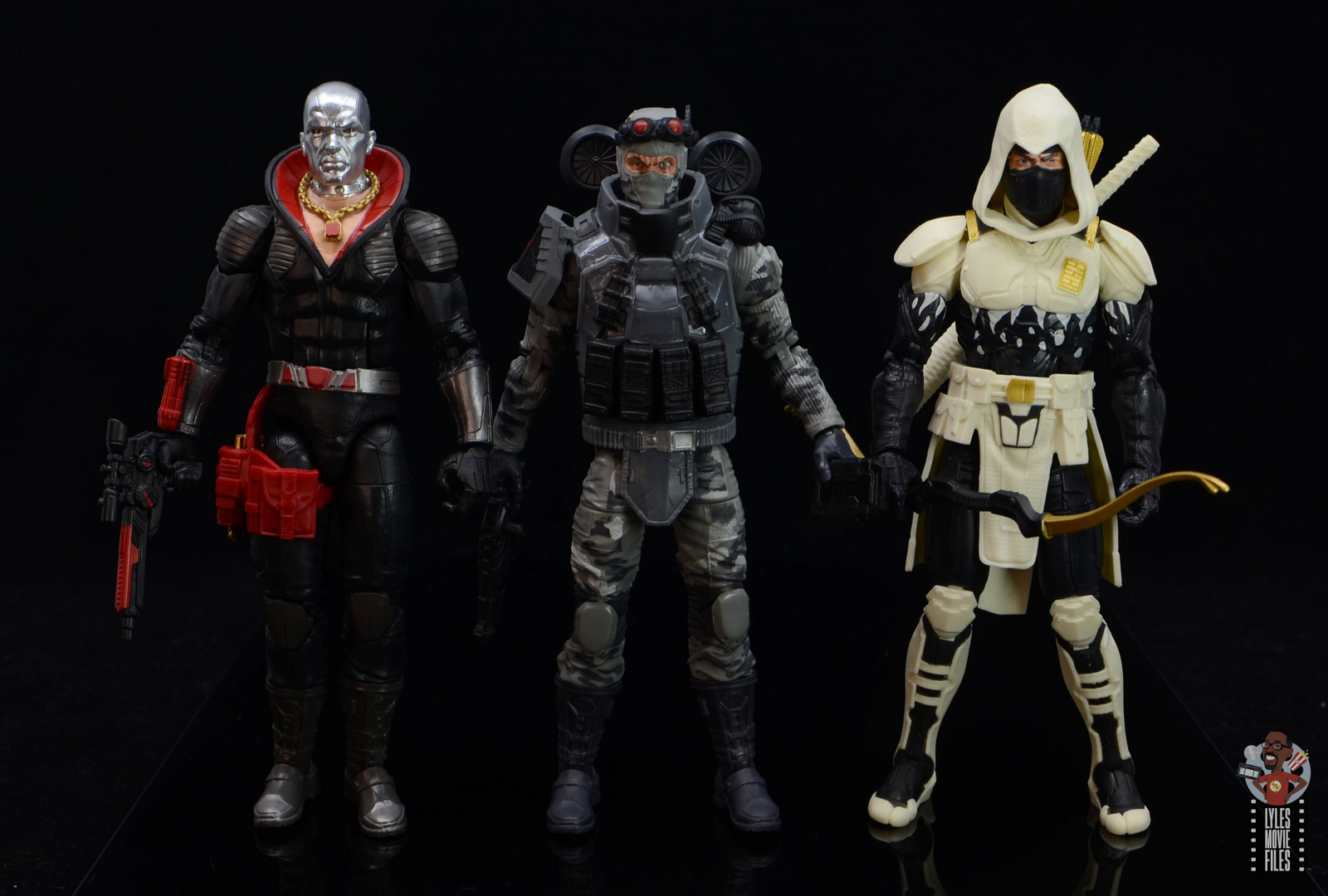 Scale:  Firefly should be about average height. He definitely doesn’t need to be the tallest member of Cobra. That should still be Destro. 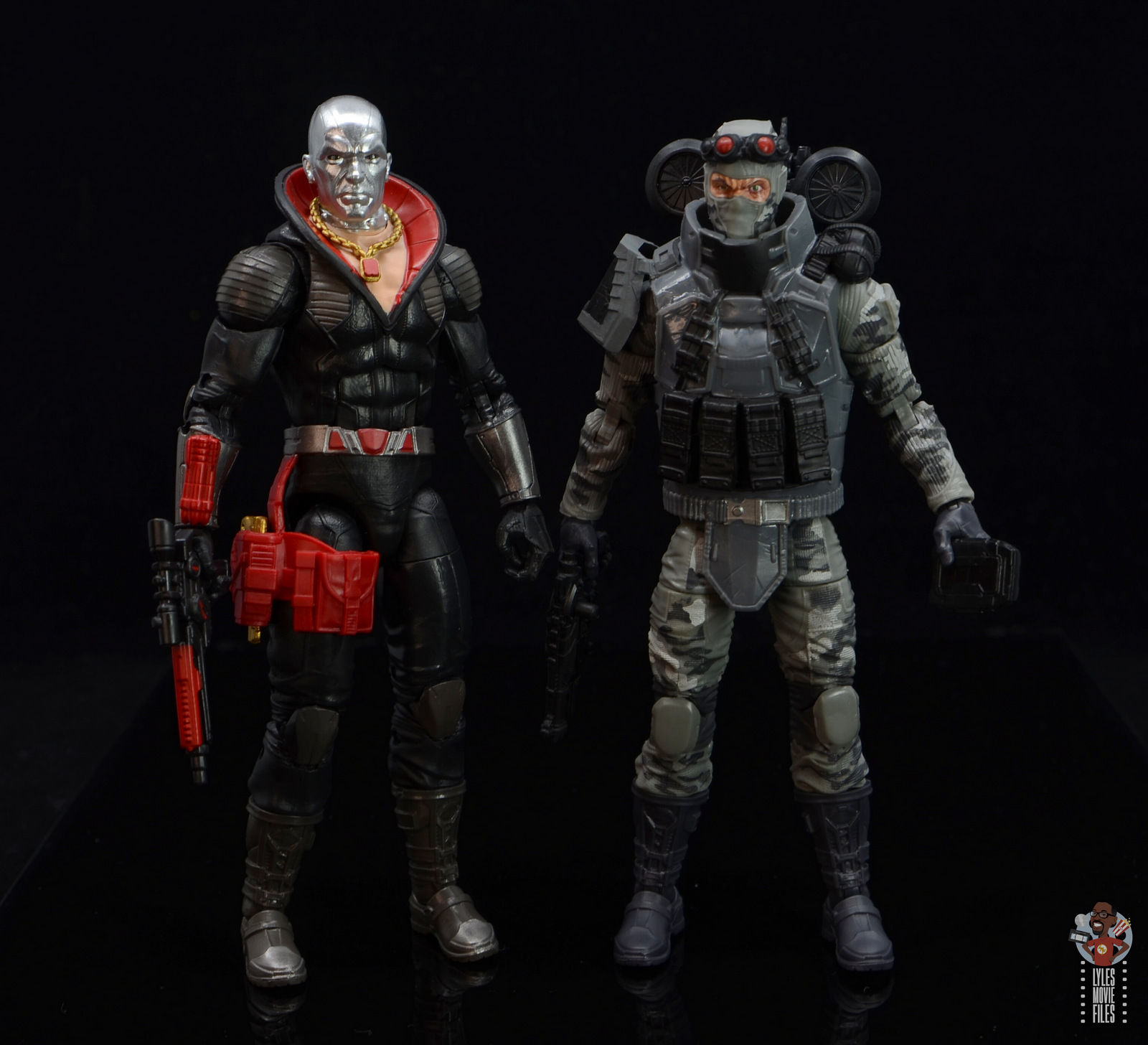 His vest gives him more bulk, but he’s a little shorter than Storm Shadow (mainly due to the hood) and Destro. 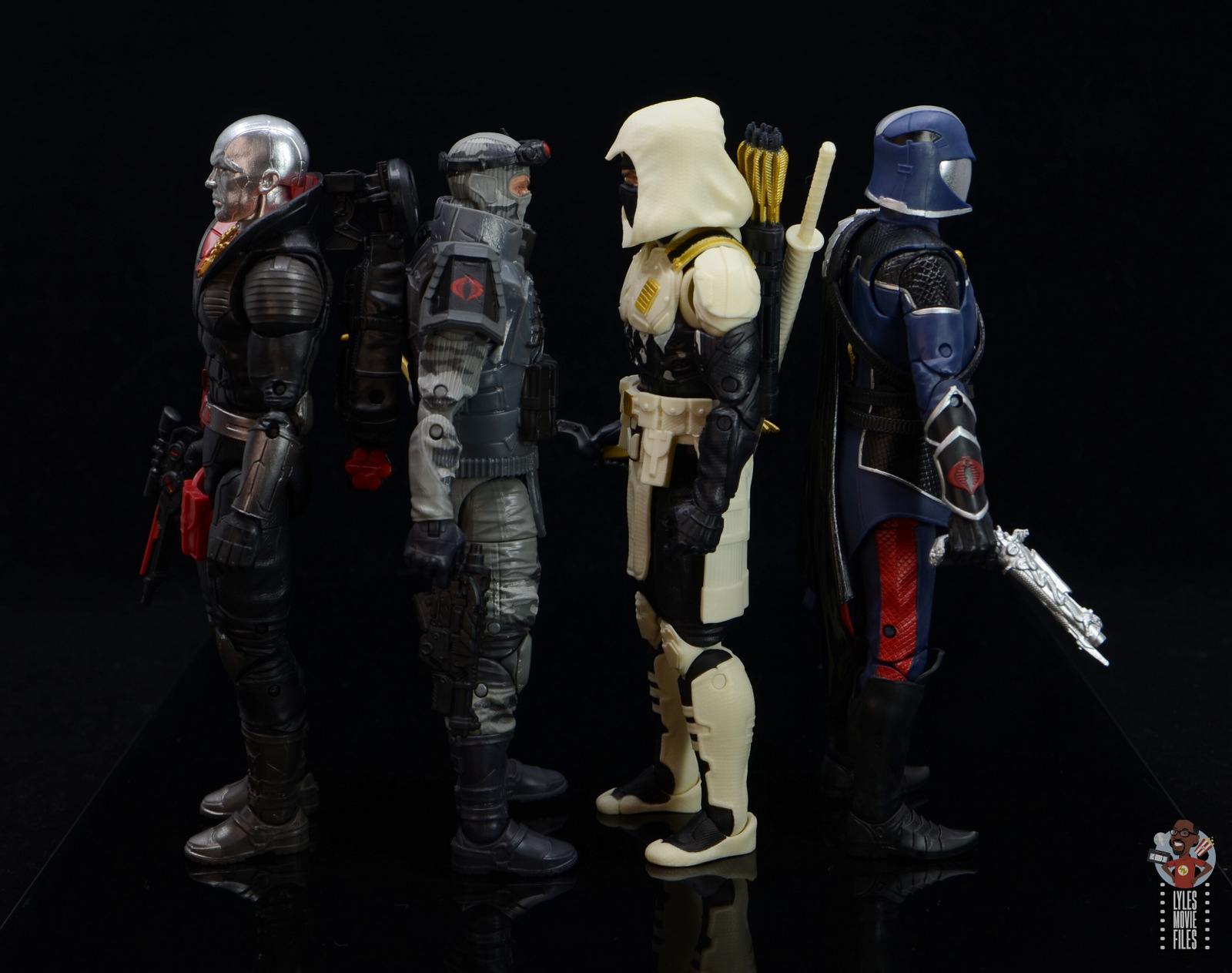 Articulation: The main catch with the vest is how much it impedes articulation. Roadblock’s was very restrictive in terms of allowing him to hit the same kind of poses as the rest of the line. 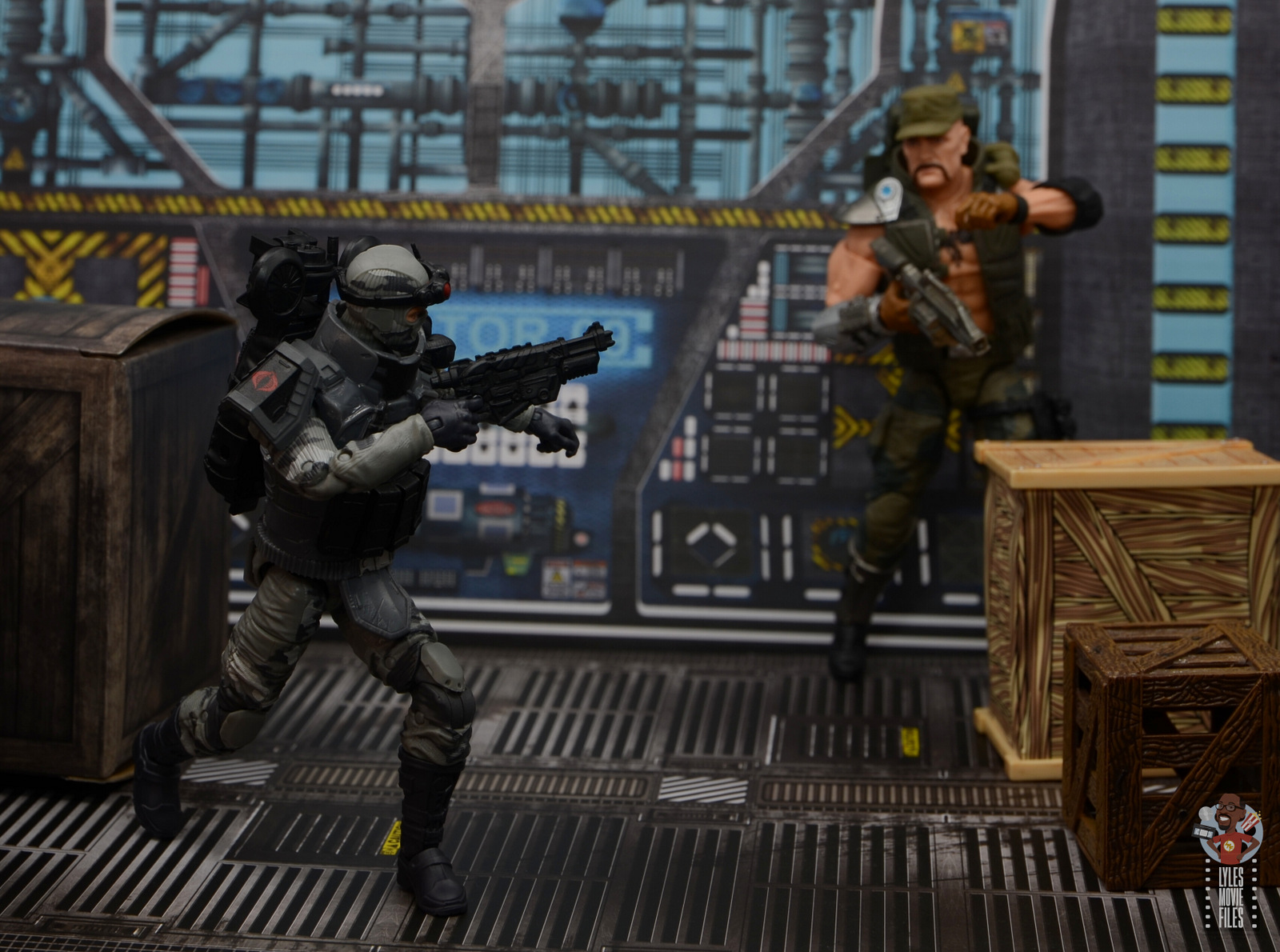 Firefly is much the same as most of his torso articulation is useless thanks to the bulky nature of the vest. The odd thing is it’s not hard, rigid plastic so much as it’s so tight on him that it just limits all the movement. Still, I was able to get some nice saboteur poses even if they’re not as smooth as I would like. 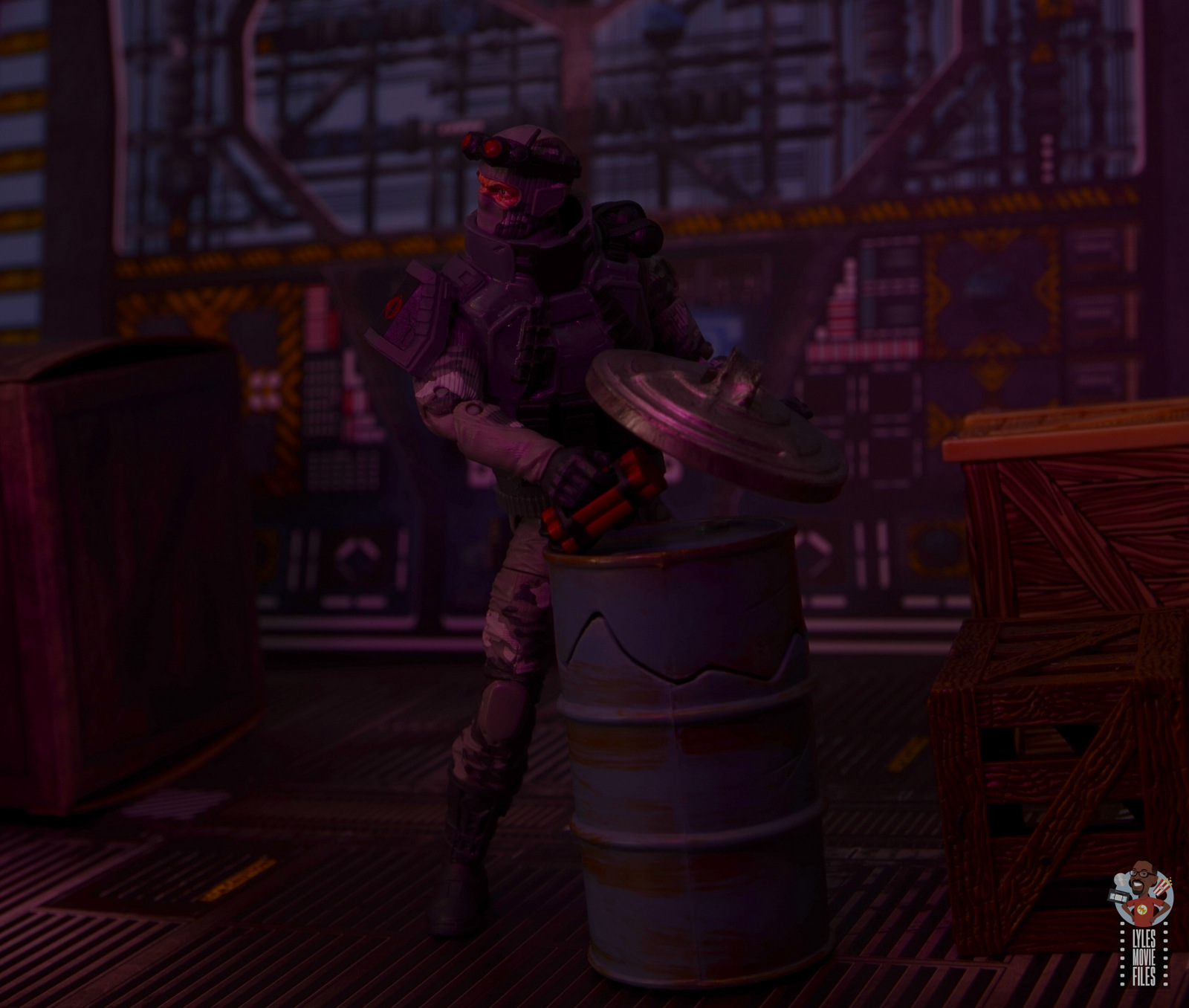 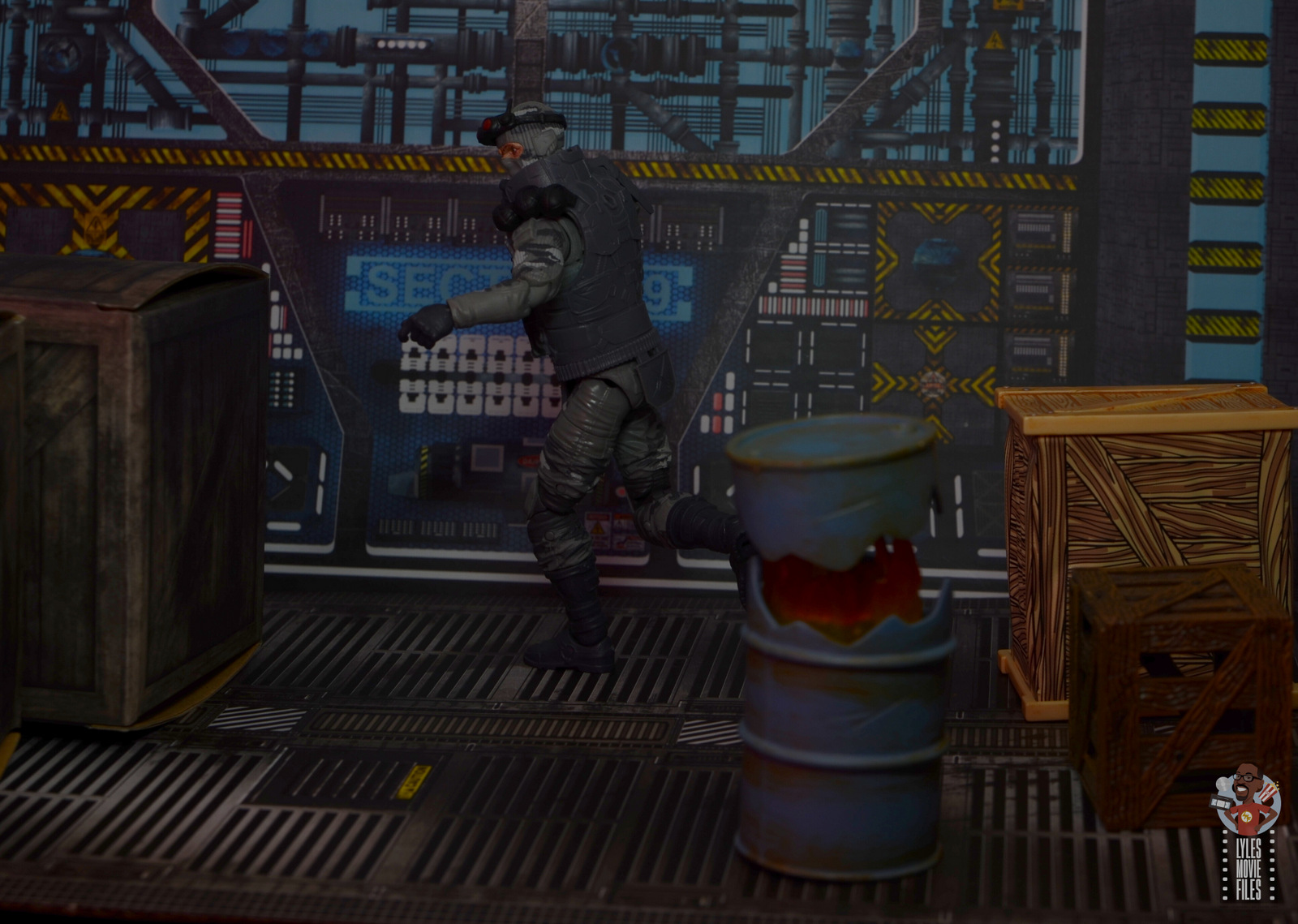 Accessories: This is the other area where the Classified Series line is quickly separating itself from other 6-inch lines. Firefly is packed with accessories. 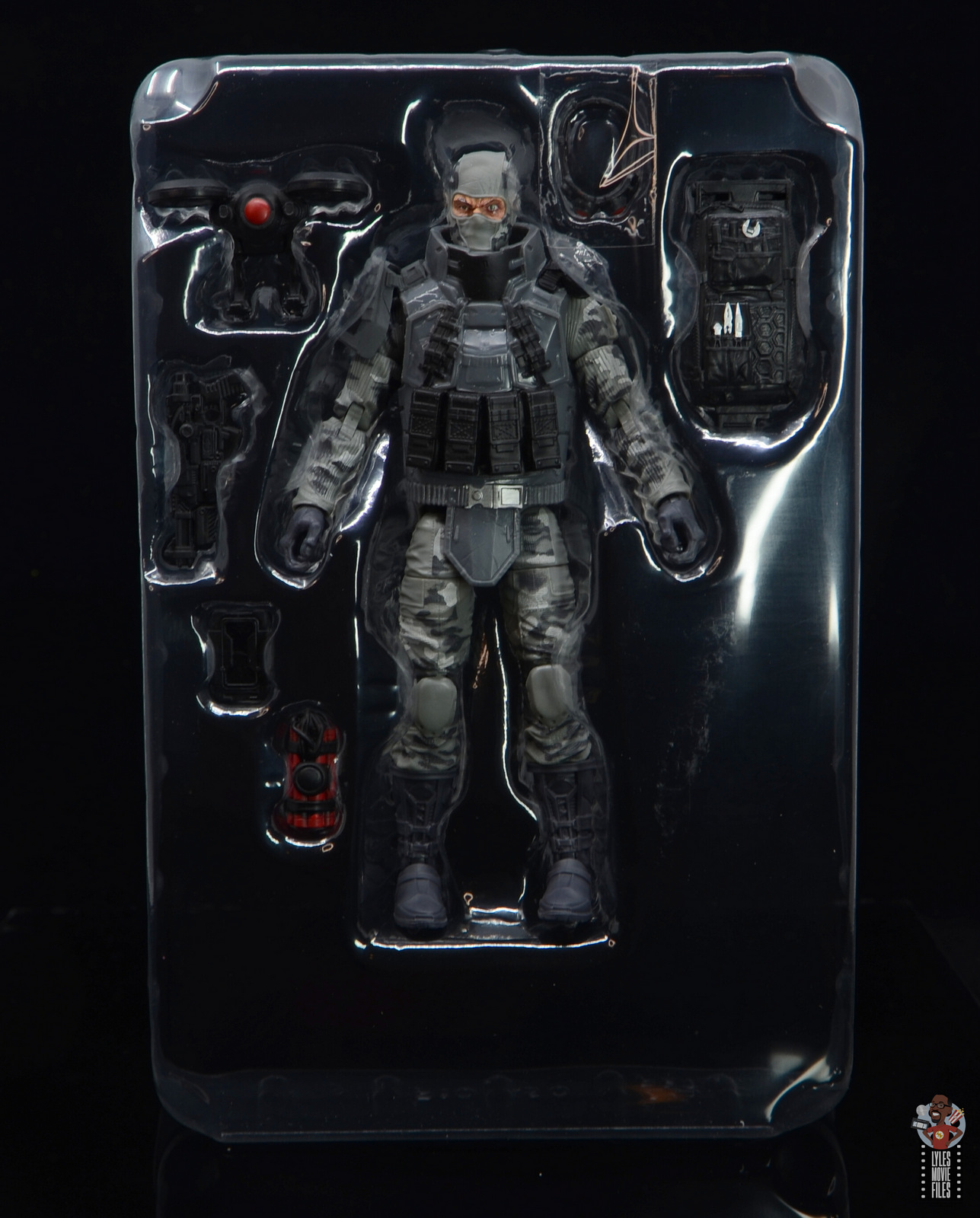 He’s got a sub-machine gun that is a stock away from really giving me flashbacks of his RAH gun. It has a peg to plug onto the figure. He also has a drone that features some articulation in its legs. The drone is a neat accessory and makes sense for him. It has a good amount of detail and can hold the dynamite. The only catch is the package art kind of made me wish there were multiple drones.

Firefly’s backpack has some (non-removable) knives. Additionally, he’s got a tablet/timer for his explosives. 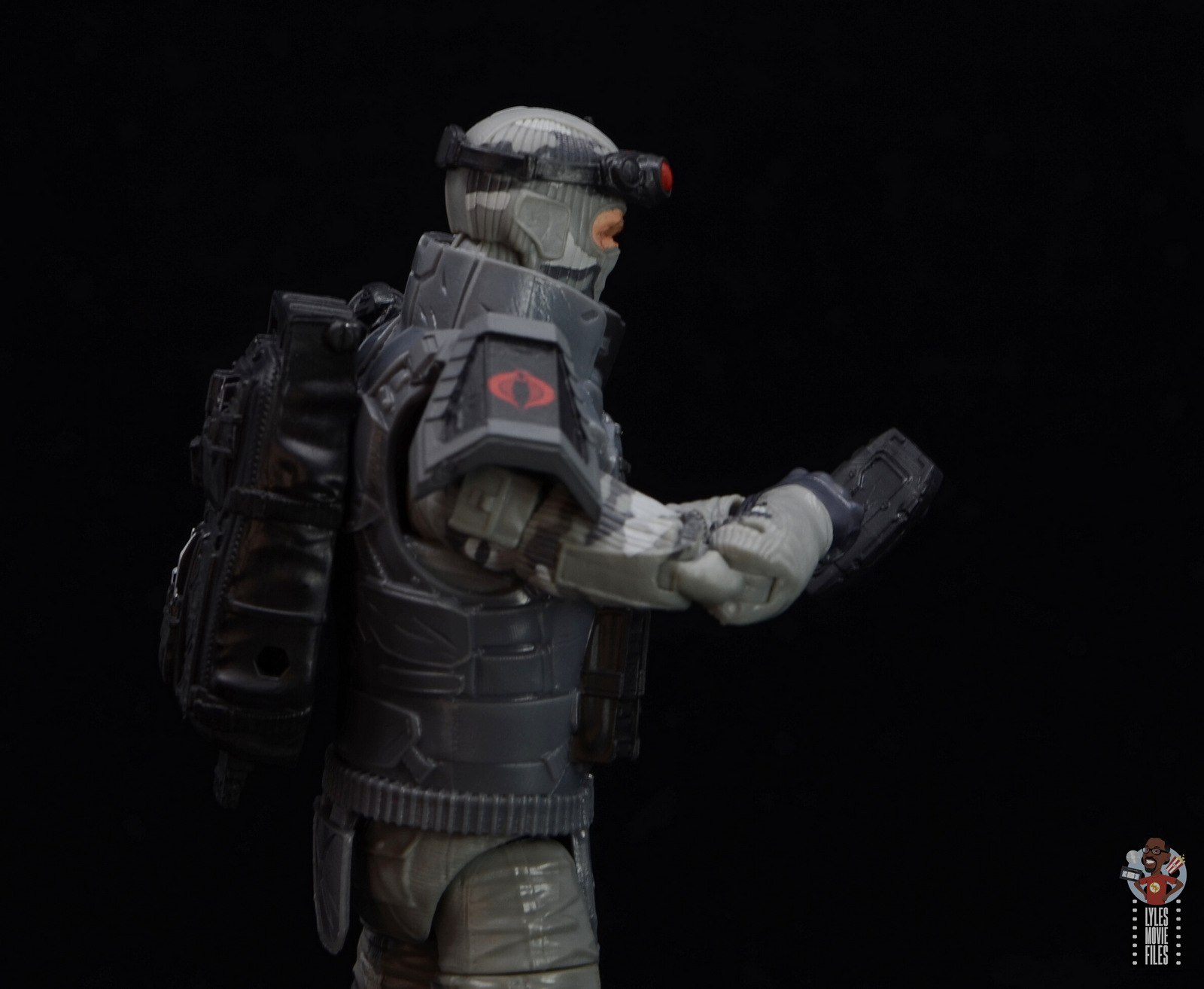 A bundle of dynamite and some goggles to help get into tricky situations. 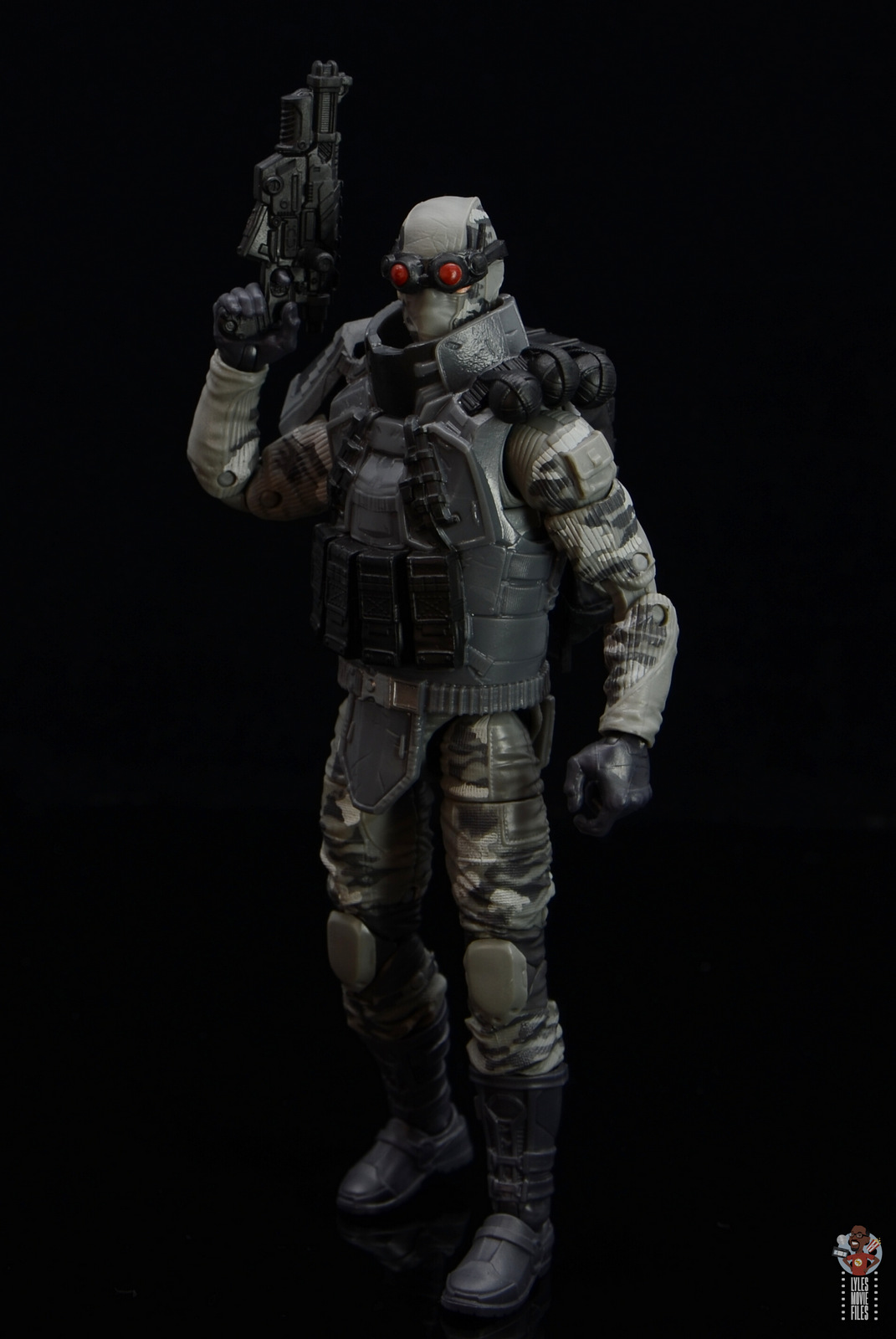 The goggles do tend to move a bit more than I’d like when I fiddle with posing his head That’s some great value with all of these options and the ability to store everything on the figure is a big plus.

There’s a slot in the dynamite that allows Firefly to grasp it so you won’t have to worry about it falling out of his hands with the slightest touch. That was a smart design choice. 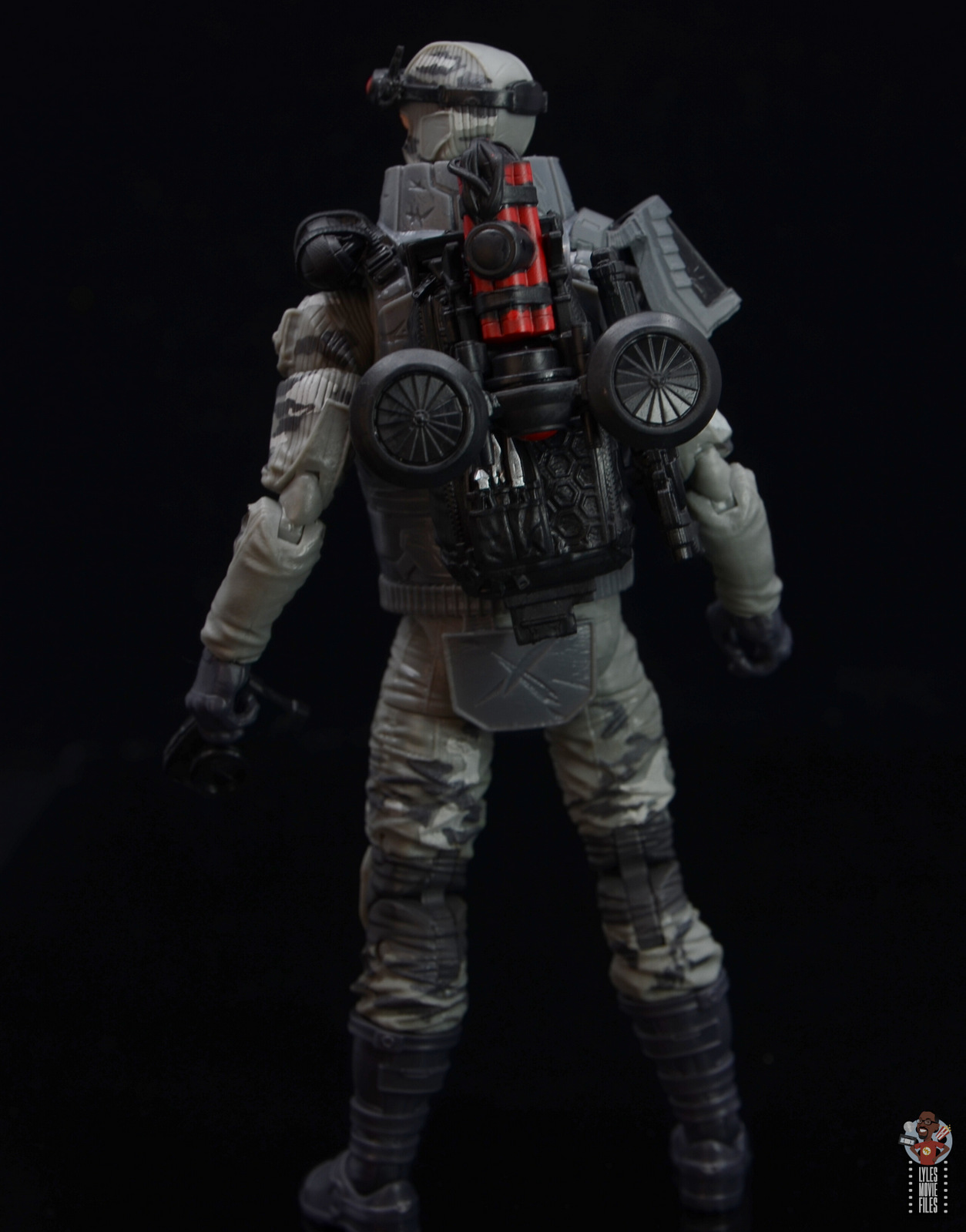 Like a lot of the figures in the line, Firefly can store most of his accessories. The drone can be slotted several ways onto the pack so you can fit things in with no trouble and choose a look you prefer instead of just one option. 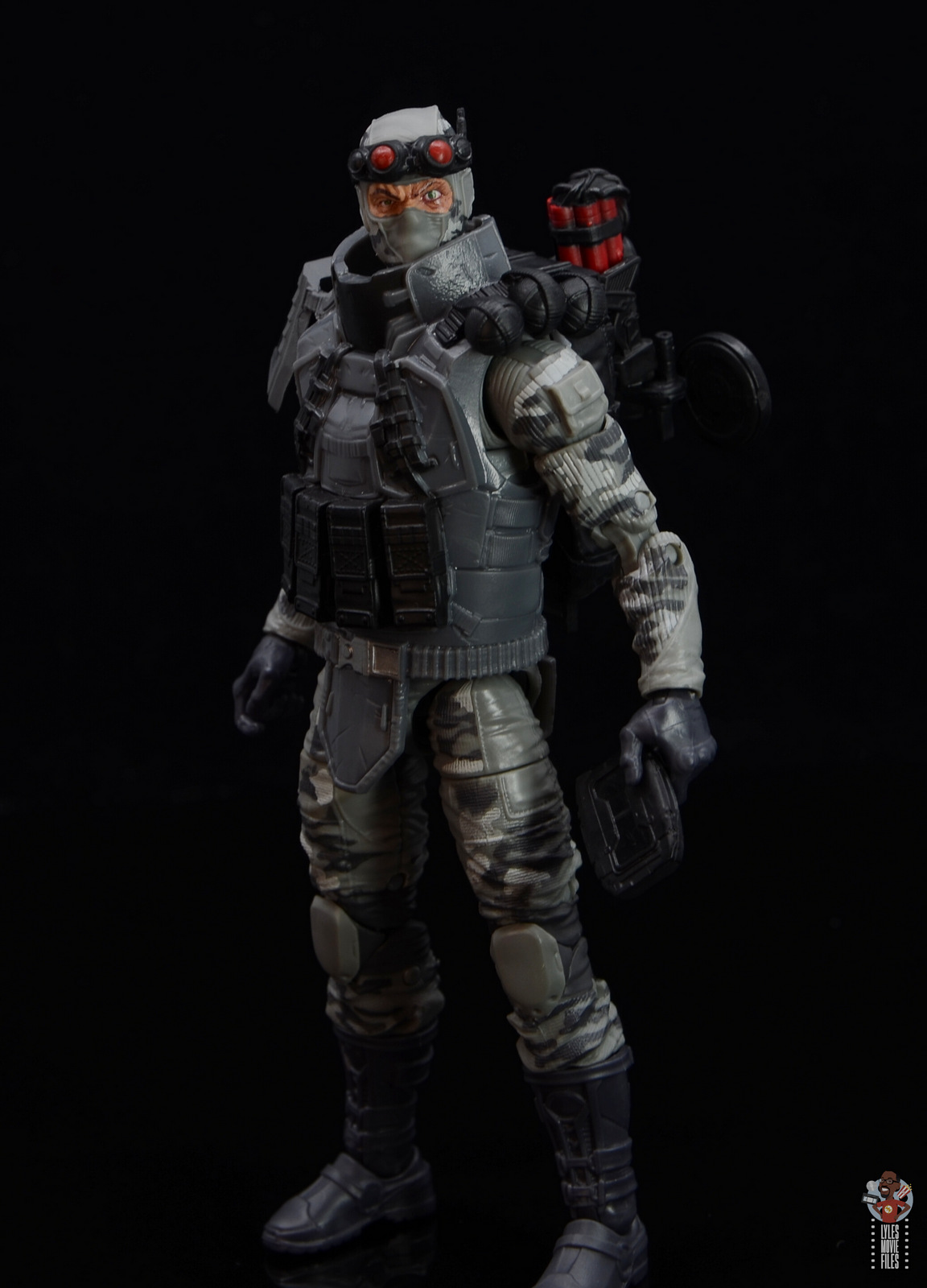 Worth It?  Firefly retails for $20. The catch is Target hasn’t been the best at stocking these exclusives like other Hasbro exclusives making people panic and scalpers buying them en masse to score a big payday. I’d advise against feeding the scalper beast right away and if possible keep an eye on stores especially over this first month. 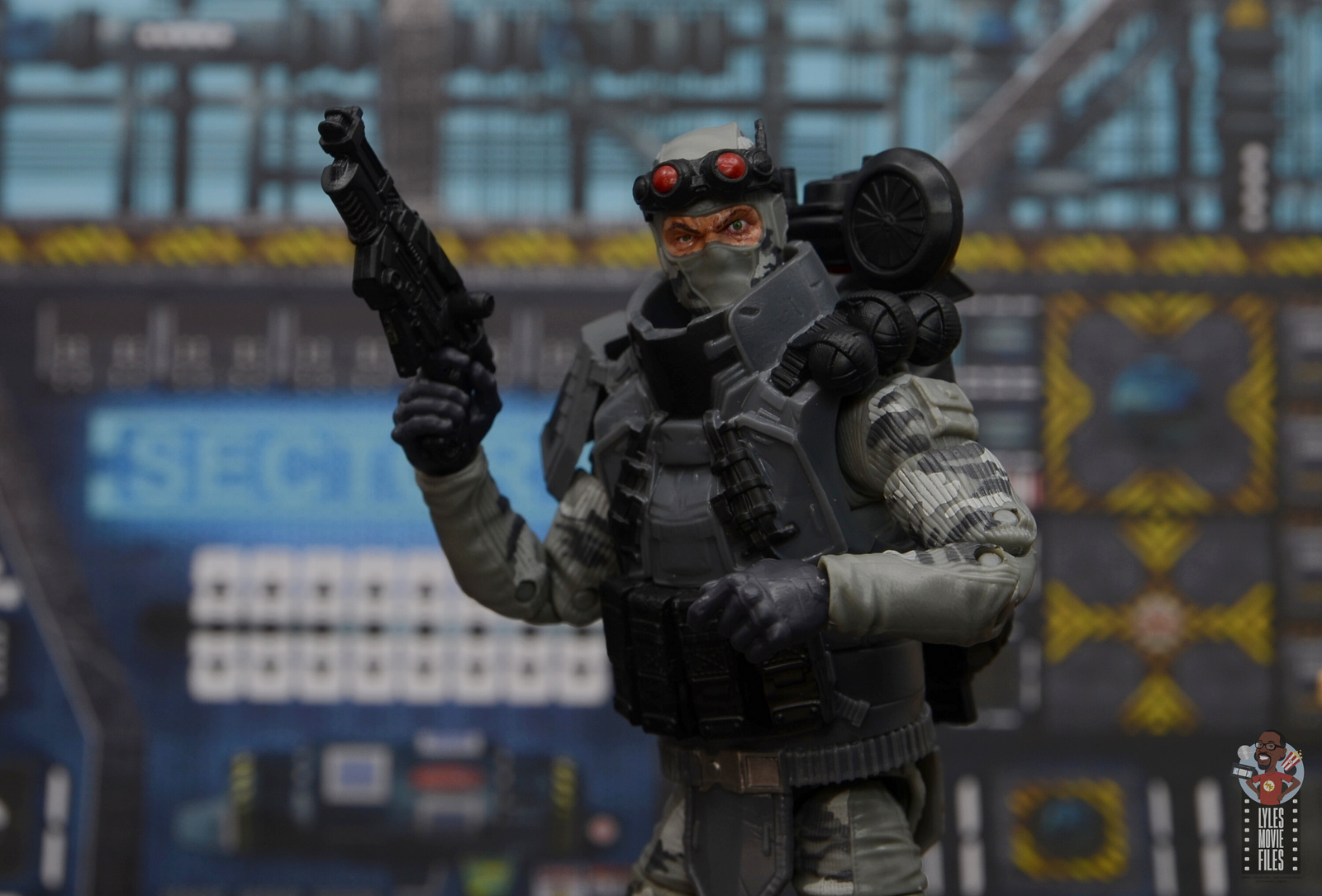 Firefly is another great entry in the Classified Series with a killer sculpt and tremendous detail. The only thing holding him back is the torso articulation, but this is a very solid 6-inch update of Firefly. Hopefully Target will get enough for everyone that legitimately wants him for their display and not for profit. 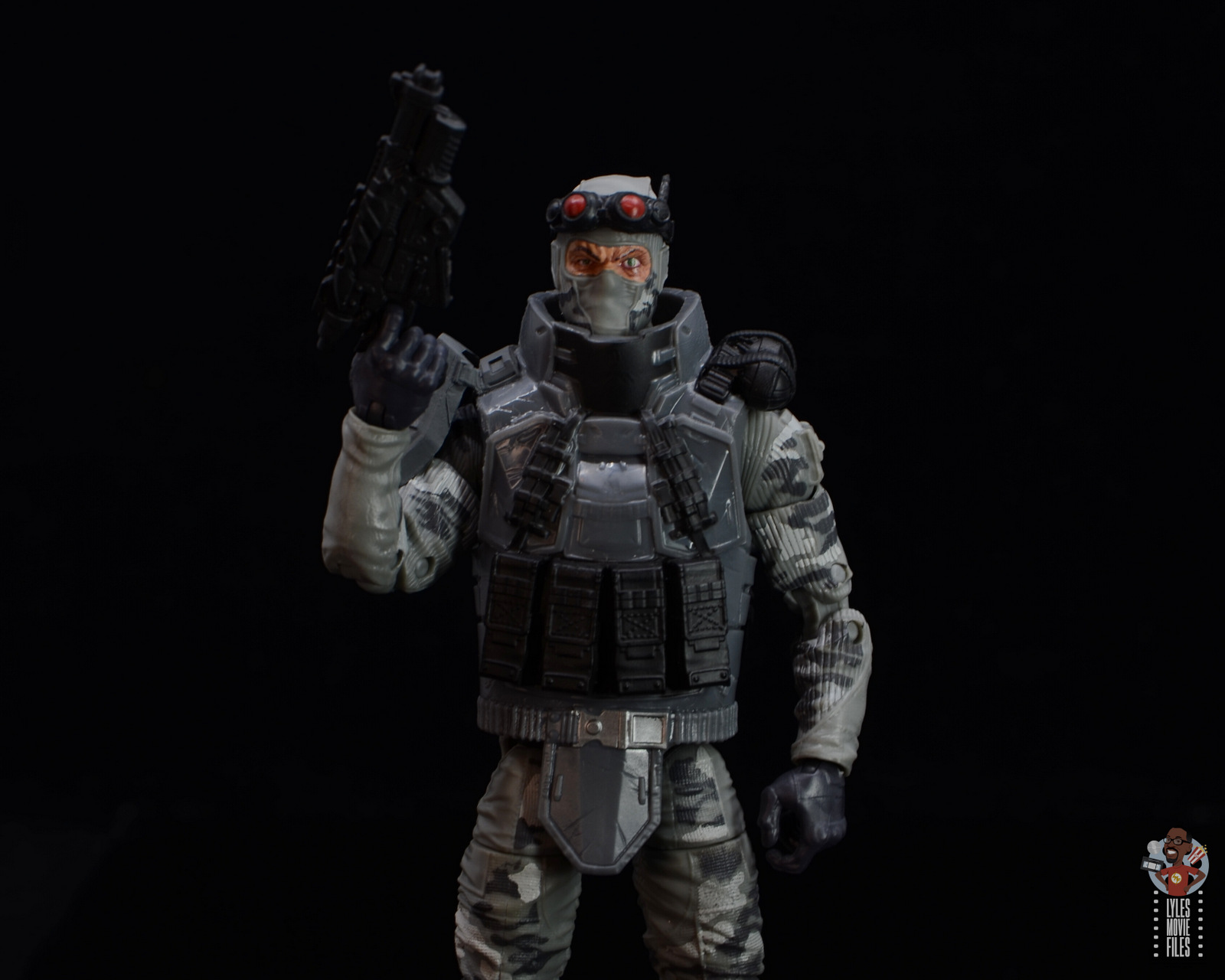 Where to Get It? As all Cobra Island figures, Firefly is exclusive to Target. He’s currently not available on the website, but there’s always a chance he’ll show up again soon.