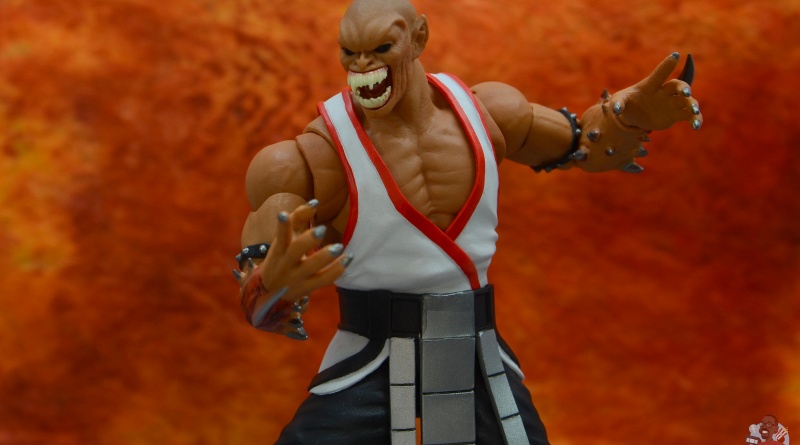 Well, until I decide which ninja upgrades I’m getting or Storm Collectibles decides to release some more non-ninja characters (ha-ha), Baraka was the last Mortal Kombat figure for a bit.

The wait for more new characters has me so mad I could fricassee someone with my forearm blades. Wait… Ok, while I find the decaf let’s take a look at the latest addition to my Storm Collectibles Mortal Kombat roster.

Packaging:  The Mortal Kombat package setup is one of my favorites thanks to the main portrait that stretches from the front to the left side, the bloody backdrop and nice collage showcasing poses and accessories on the back. 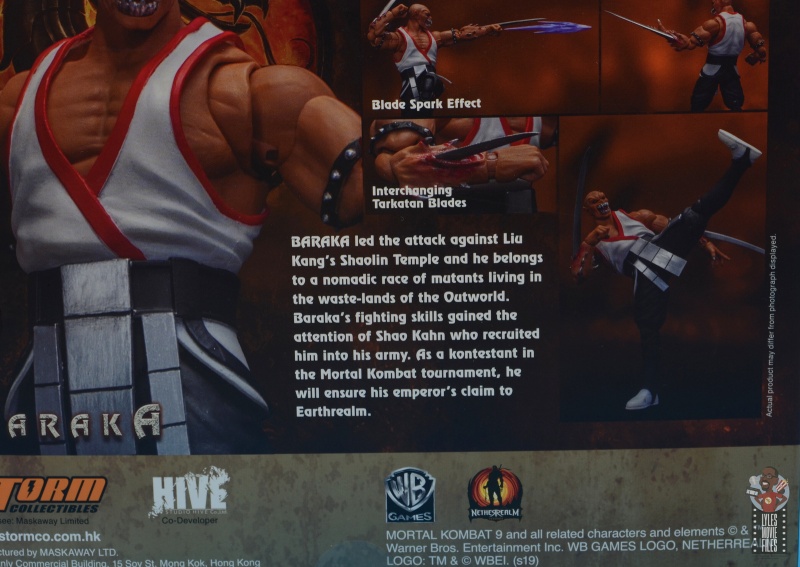 Baraka’s bio shows his deep connection to Shao Khan and Liu Kang, which makes the latter’s continued absence in the line all the more puzzling. 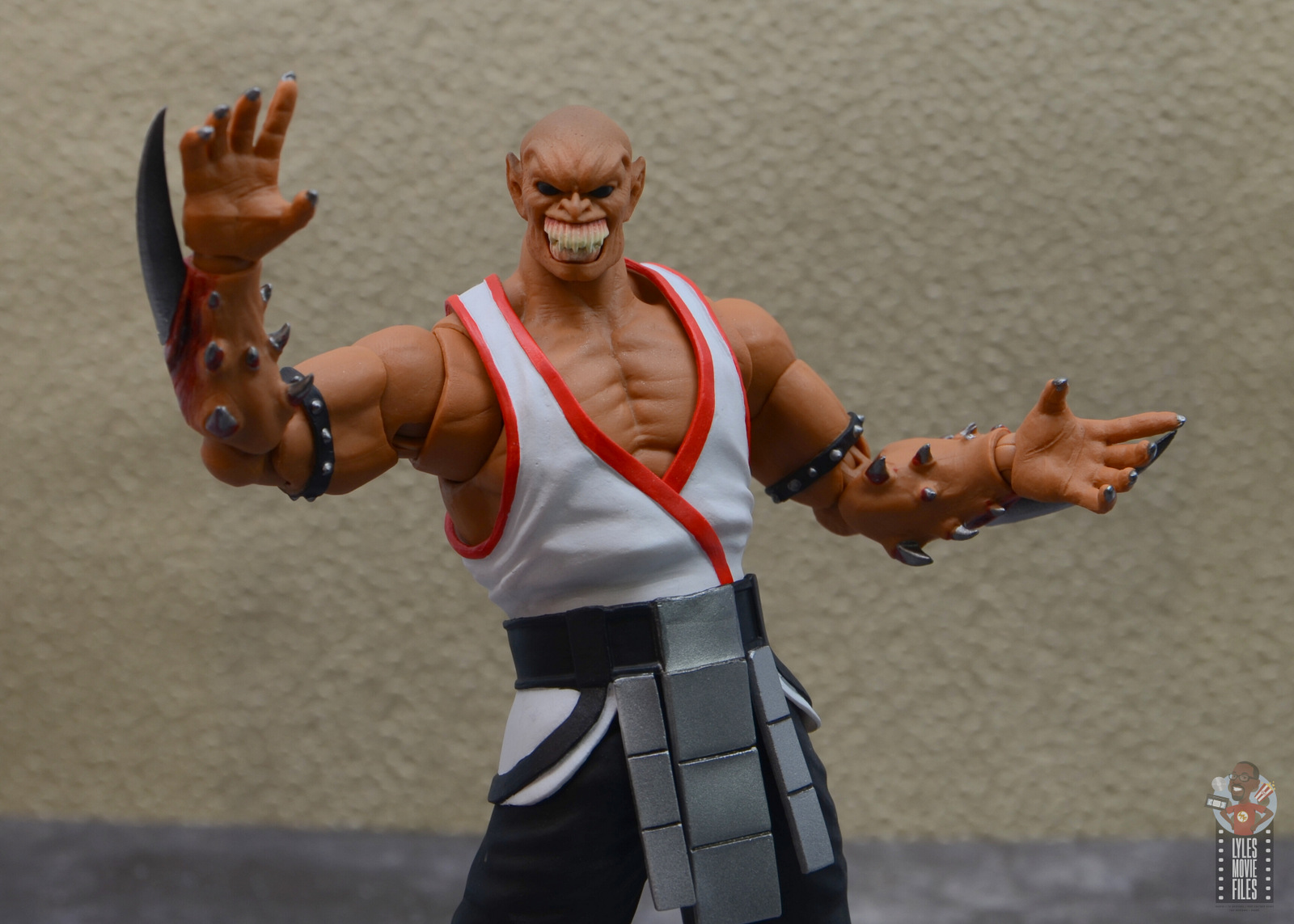 Likeness:  Baraka definitely stands out among the Mortal Kombat offerings so far thanks to his fanged teeth expressions, drastically arched eyebrows and a sensible ensemble. Seriously, Baraka is one of the best dressed characters so far. 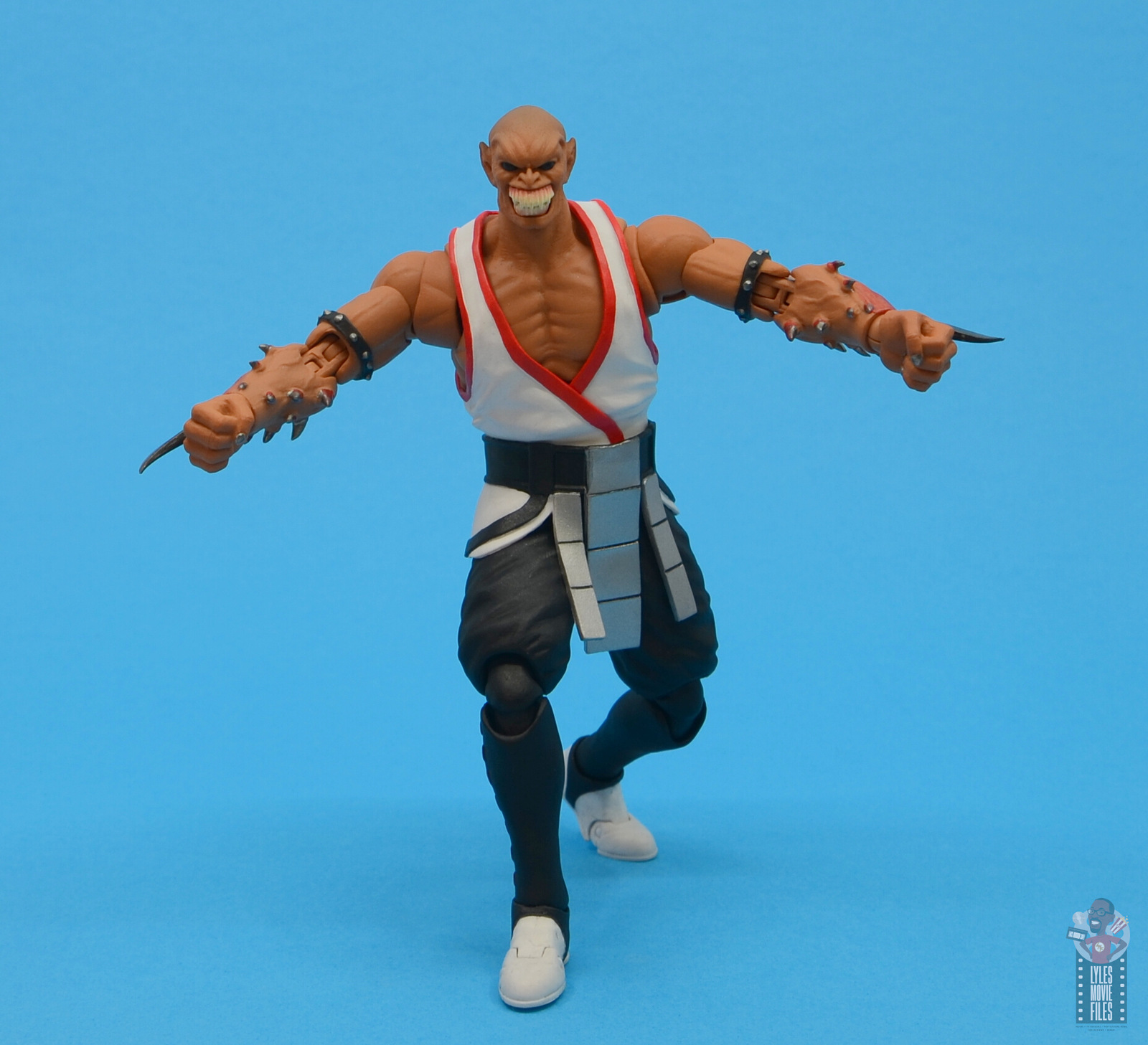 His head sculpt is where they moneys at of course. Storm Collectibles did a fantastic job with it and capturing his savage and aggressive nature. I like the studded armbands, the overall flow of his outfit with the flared MC Hammer pants trimming in and the random protrusions around his forearm. 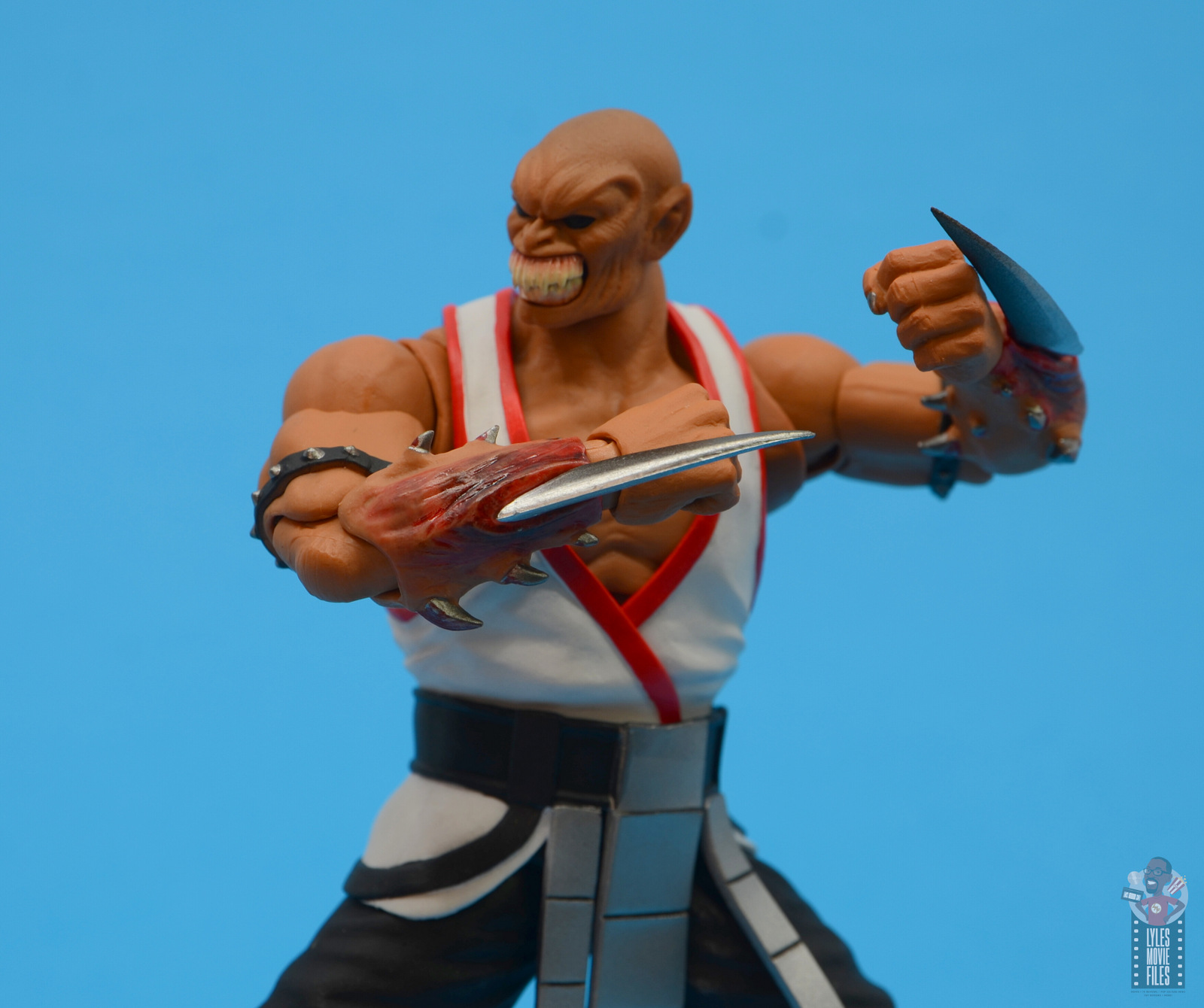 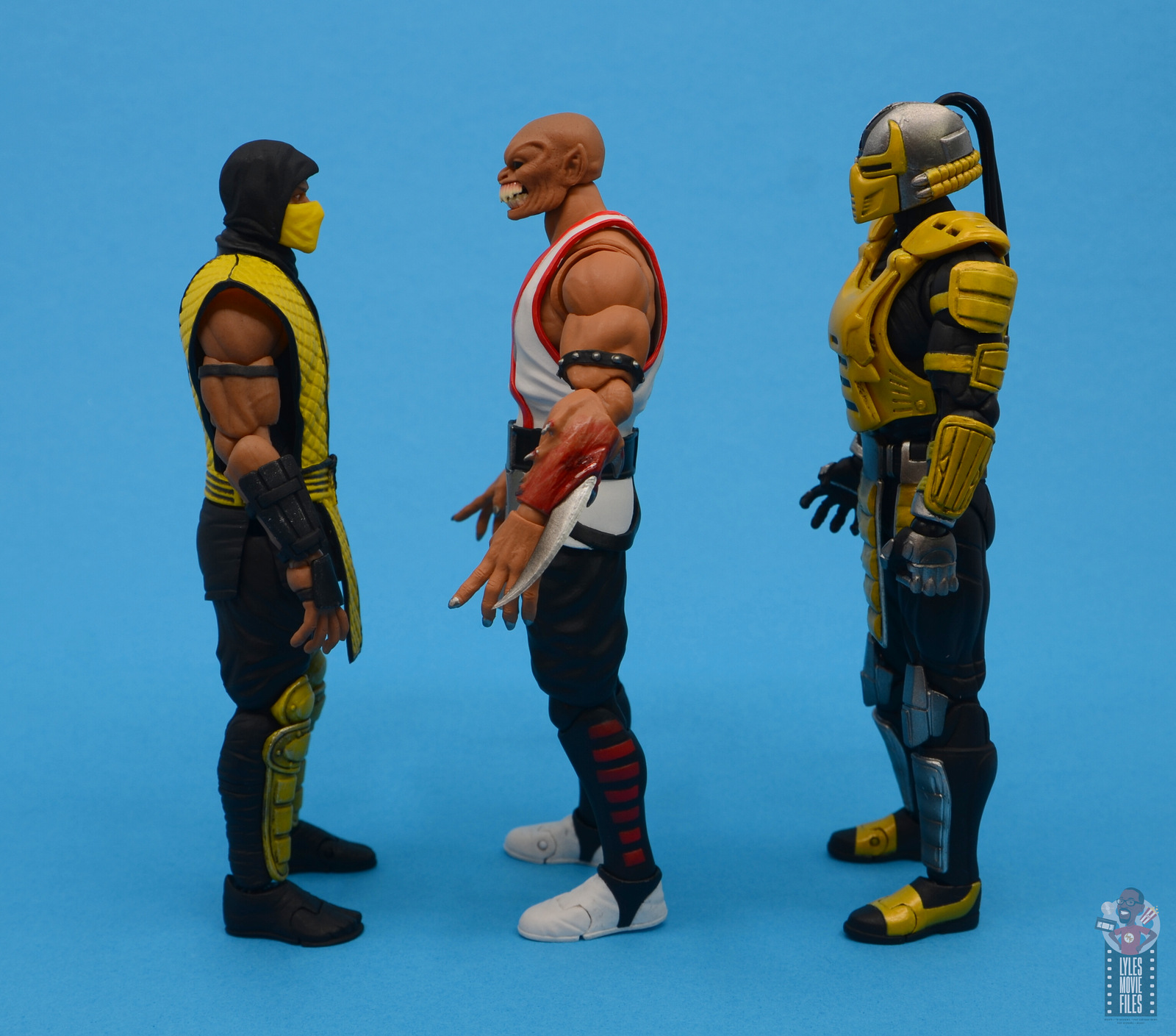 Scale:  Baraka is about average size so he’ll look down at the earlier ninjas and look up at Shao Khan and Goro. 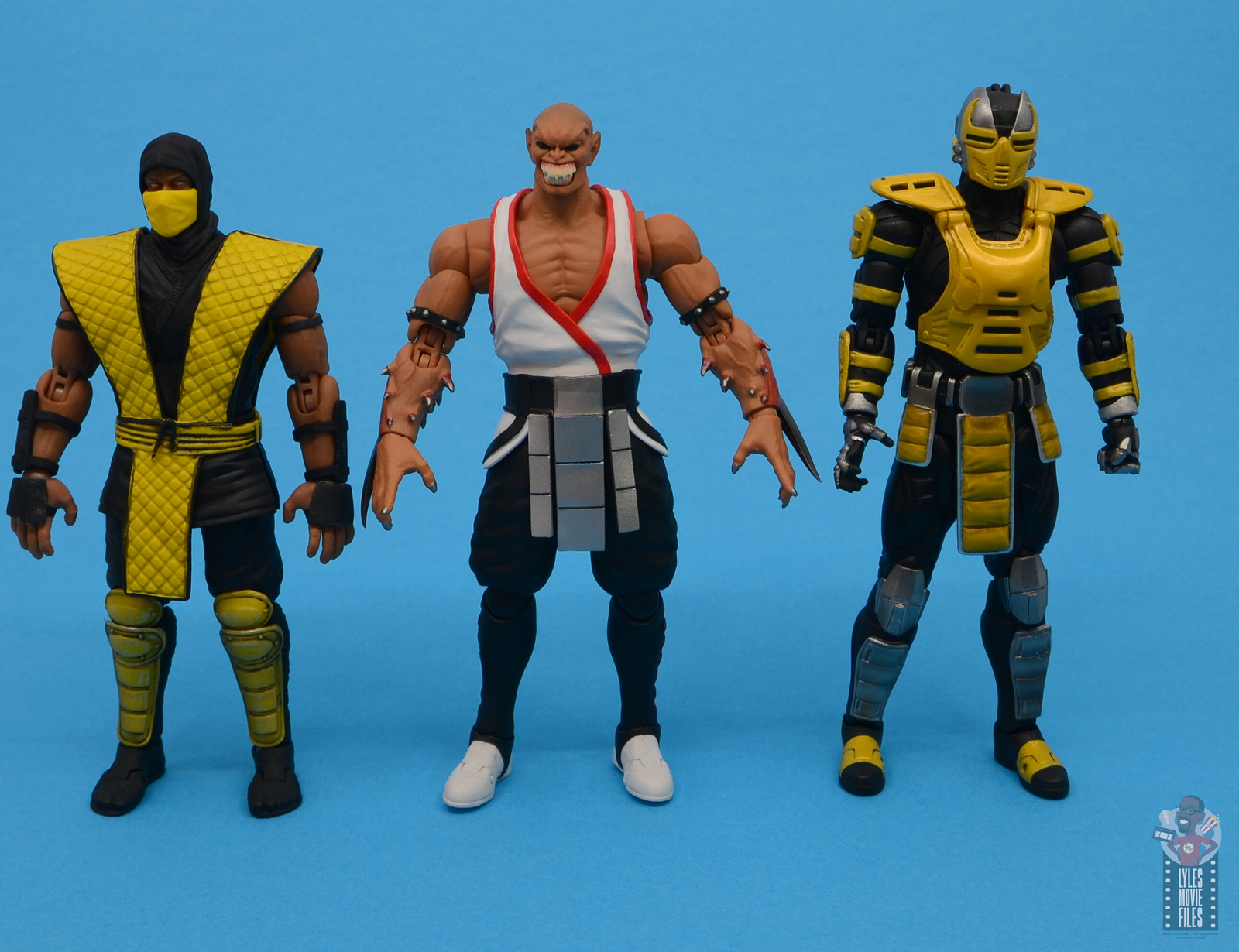 Paint:  Storm Collectibles’ paint work has been exceptional with all of their lines and the bloody forearms are a nice little attention to detail.

The package and prototype art shows the teeth are silver, but they have show the gums and a decaying with the teeth with red, pink and off white.  His eyes are black, but they’re painted in a way that they catch the light well and have more depth than a plain flat black.

Nothing else about the paint job is out of whack as Storm Collectibles continues to show a ton of precision and quality with their paint performance. 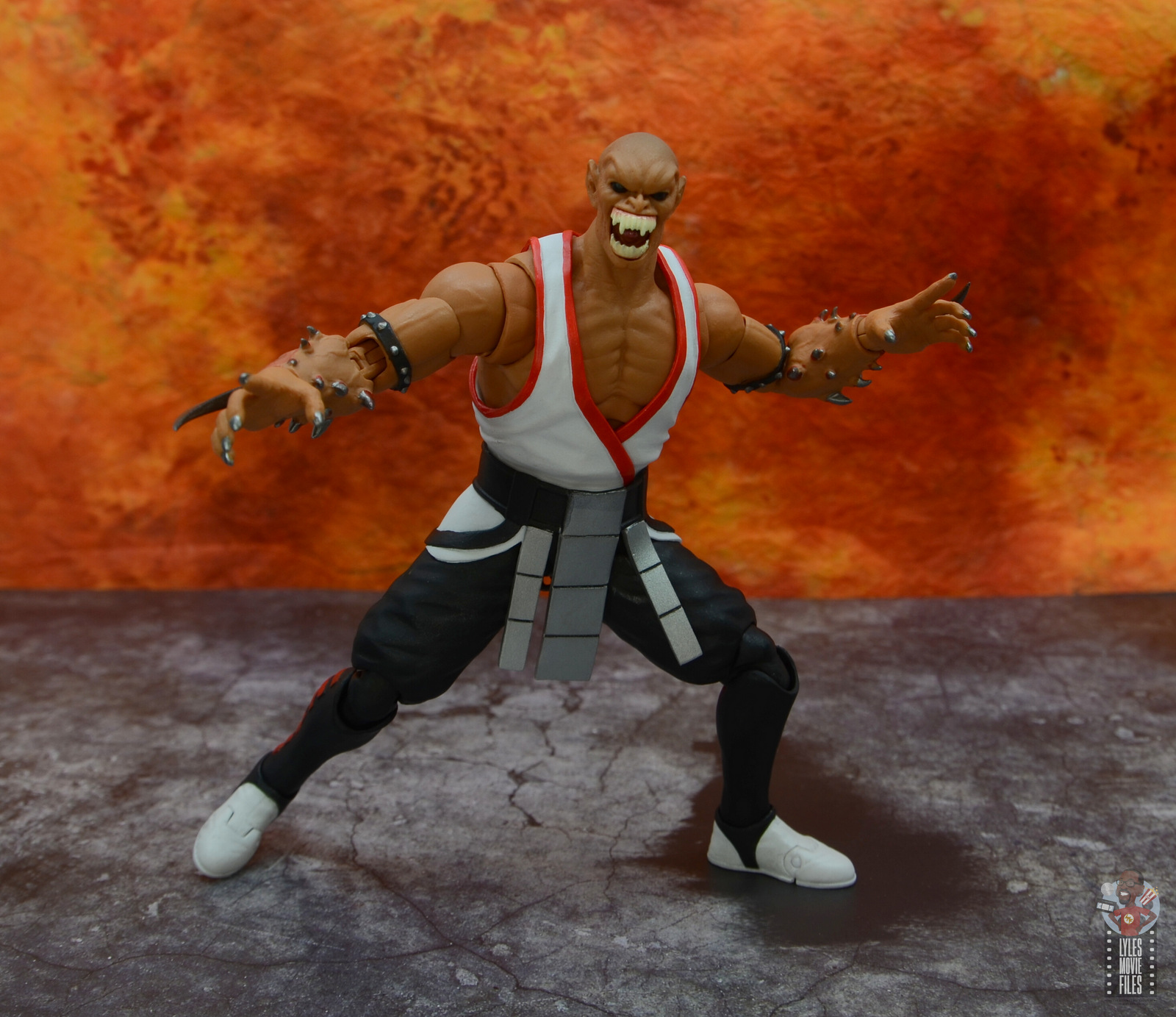 Articulation:  Baraka poses just as well as you’d expect. This line is fantastic in terms of movement and ease of getting some fun fighting poses and stances. 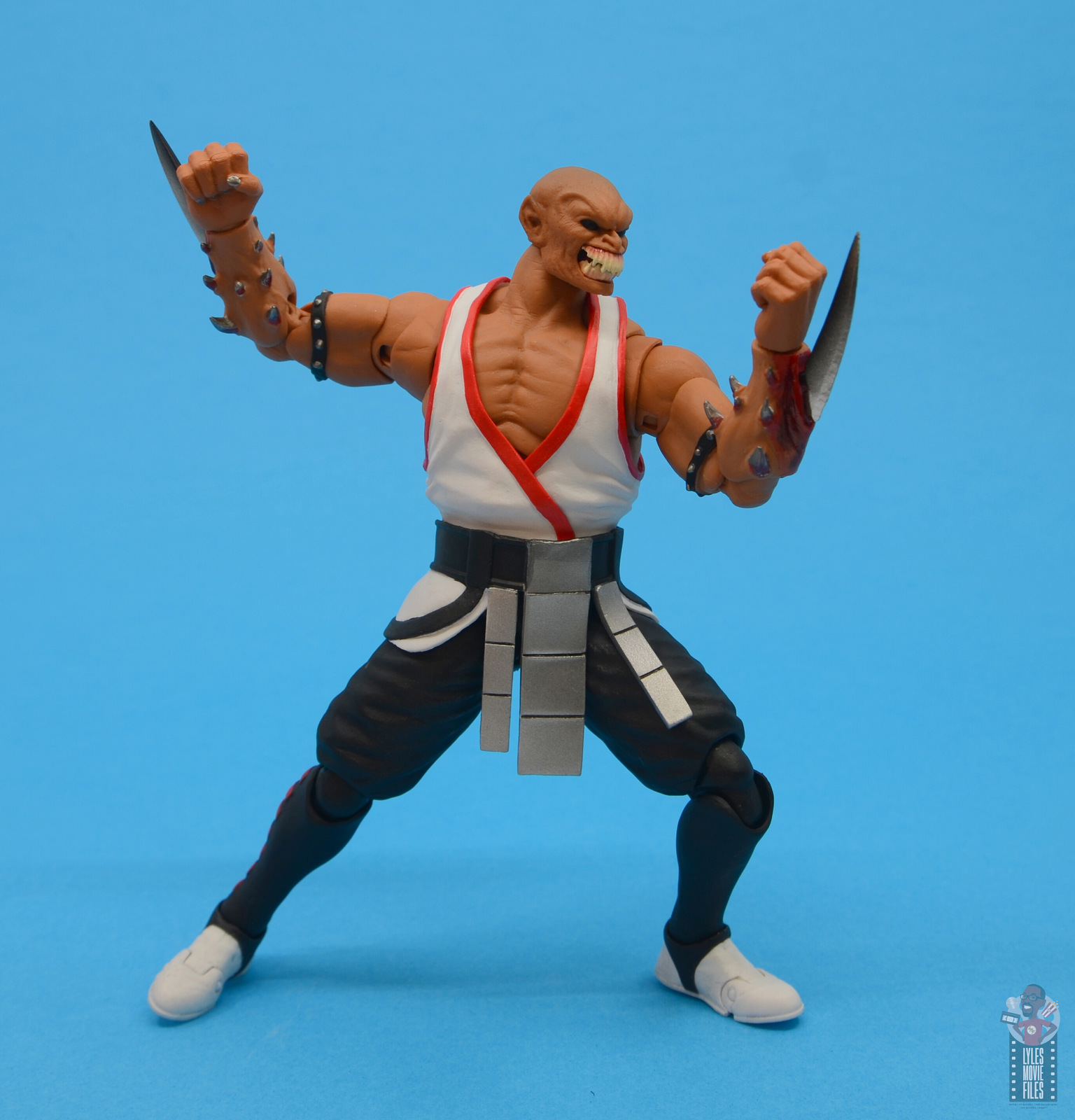 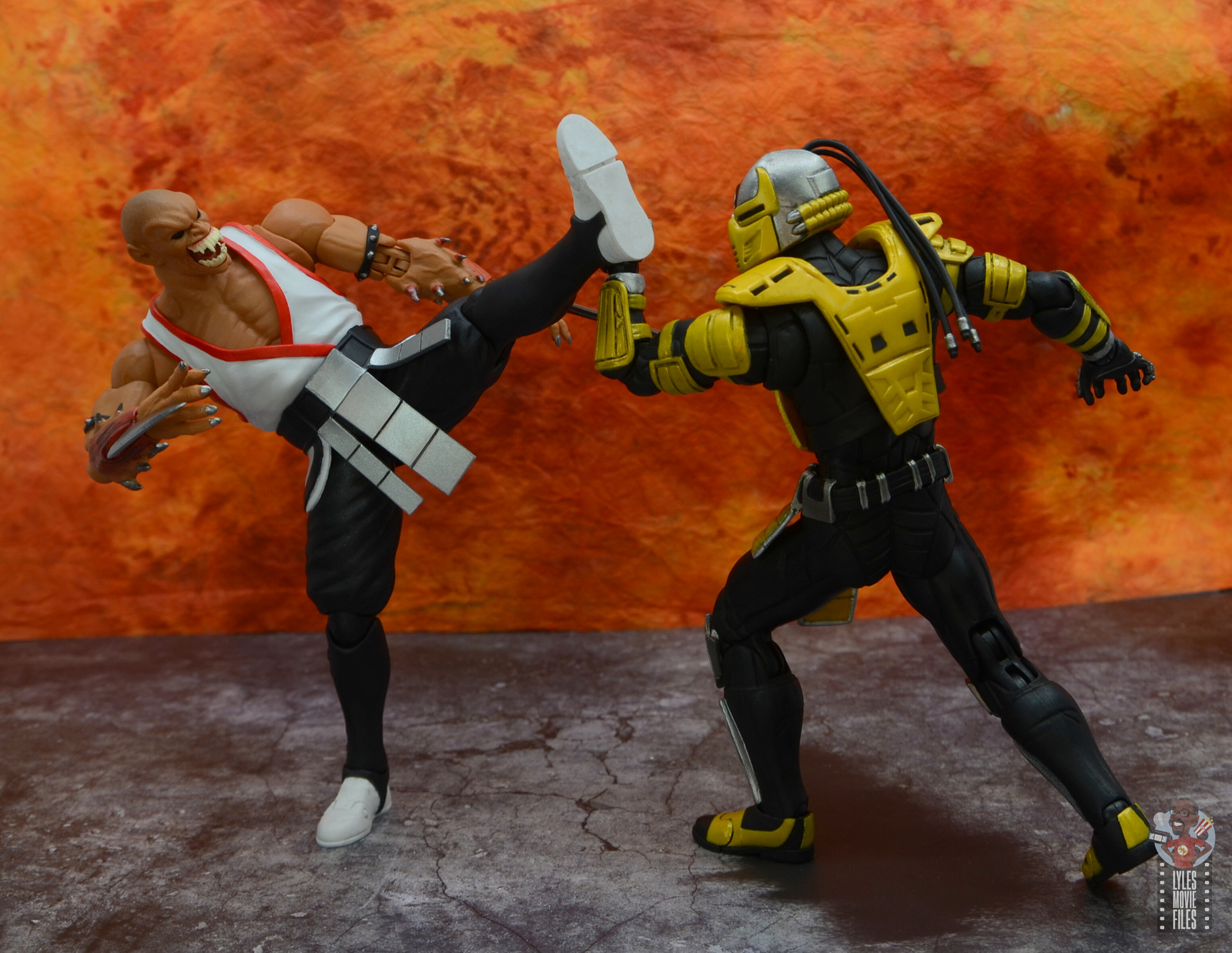 Accessories:  Baraka has his interchangeable Takatan Blades that come down just about down to his ankles. 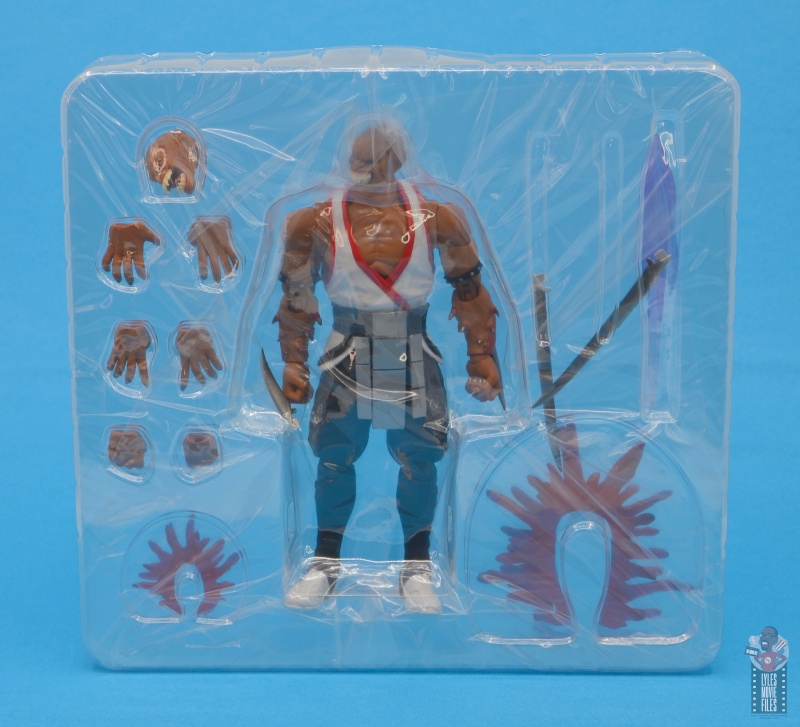 There’s also the blade spark effect projectile piece that fits onto the tip of the blade. The fit here is precarious and doesn’t always lock into place, but it’s a nice inclusion. 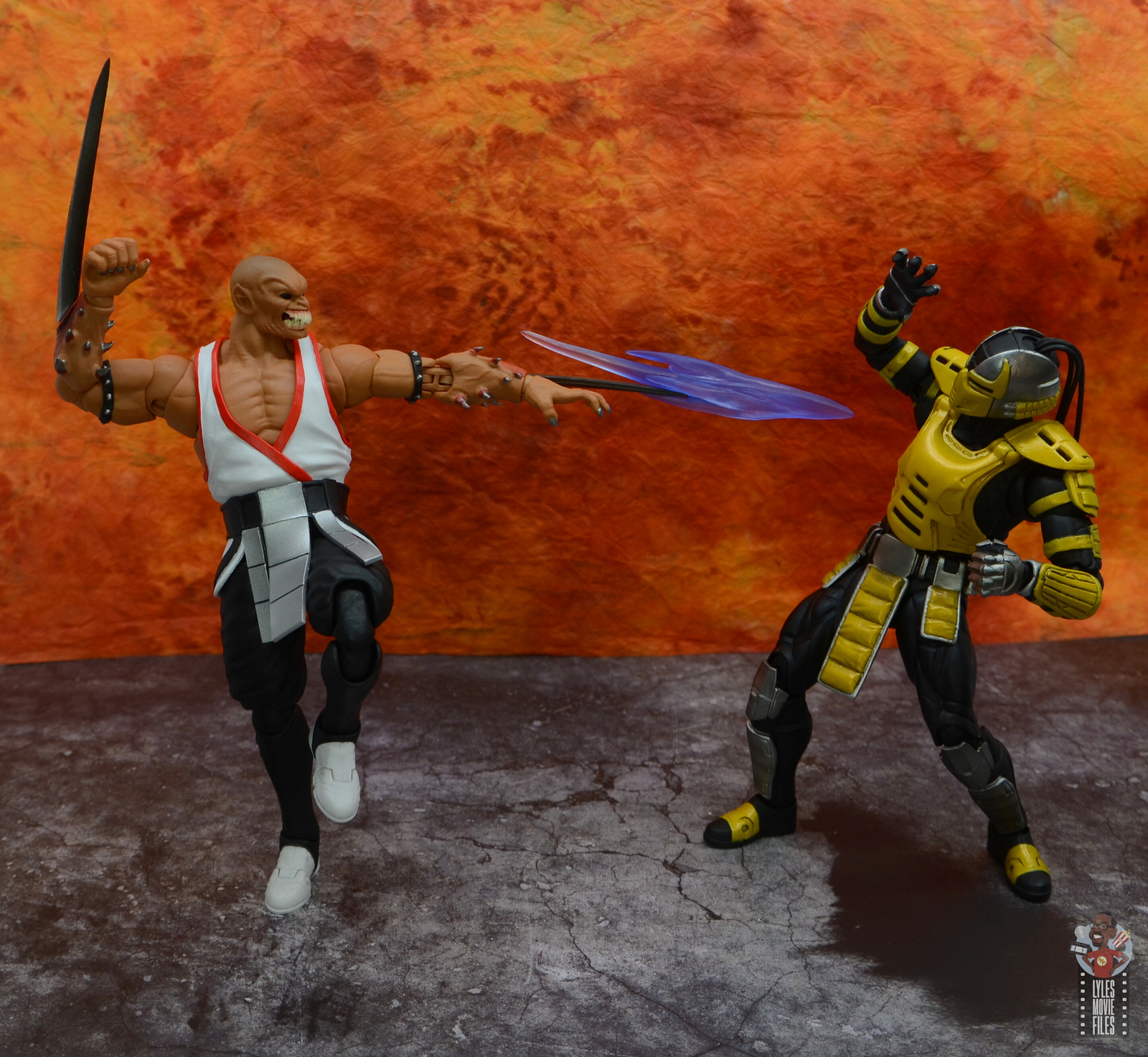 My favorite accessory is his blood effects, which wrap around the shoulders of other figures. 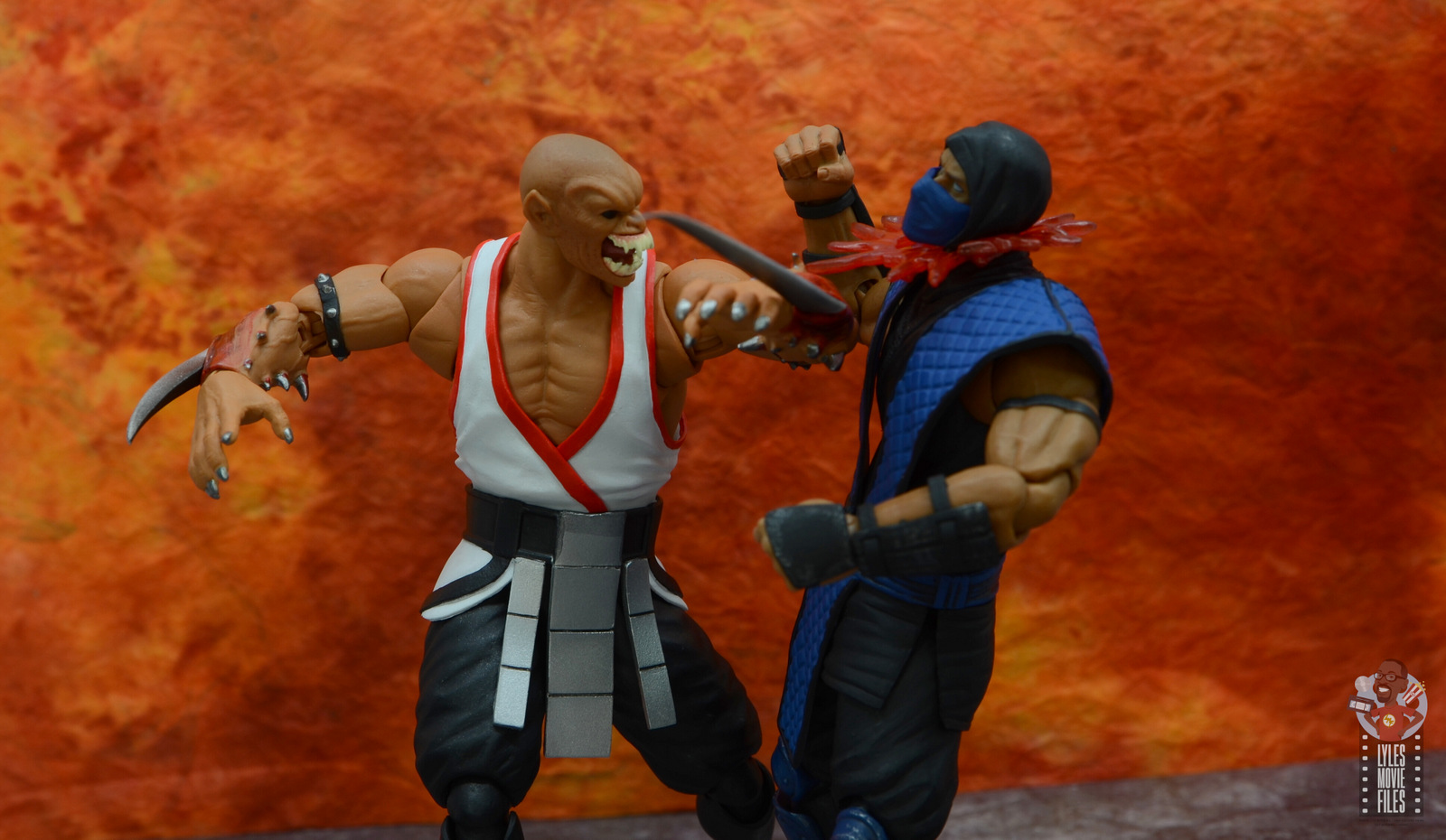 They fit on tightly and are a nice showcase effect. I love how Storm Collectibles really makes an effort to incorporate fun accessories that fit the character onto the figures. 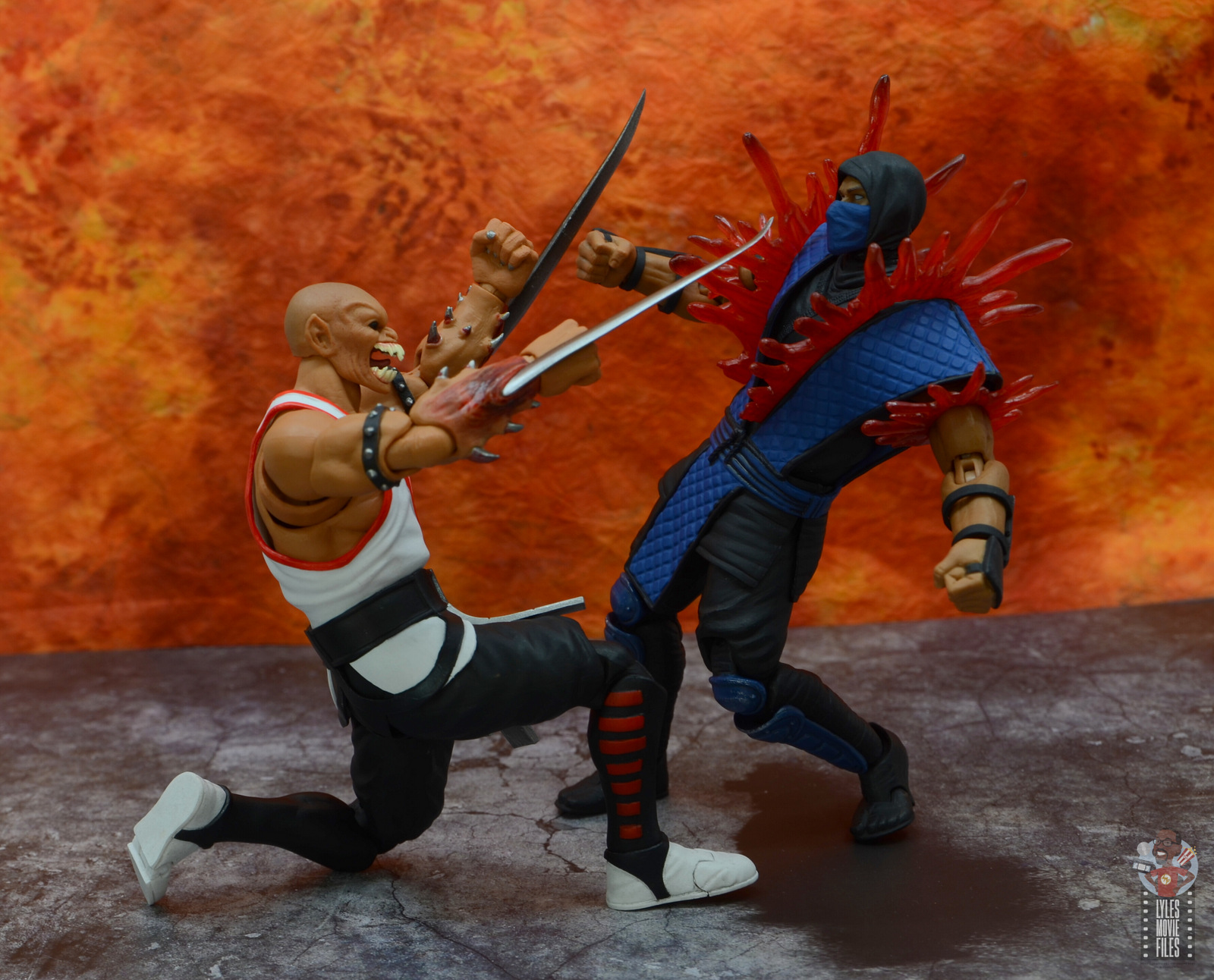 Finally he’s got an alternate head sculpt with a wider open mouth. I feel like this is the main one folks are going to use on their display as it’s fierce and captures Baraka’s whole mood better. 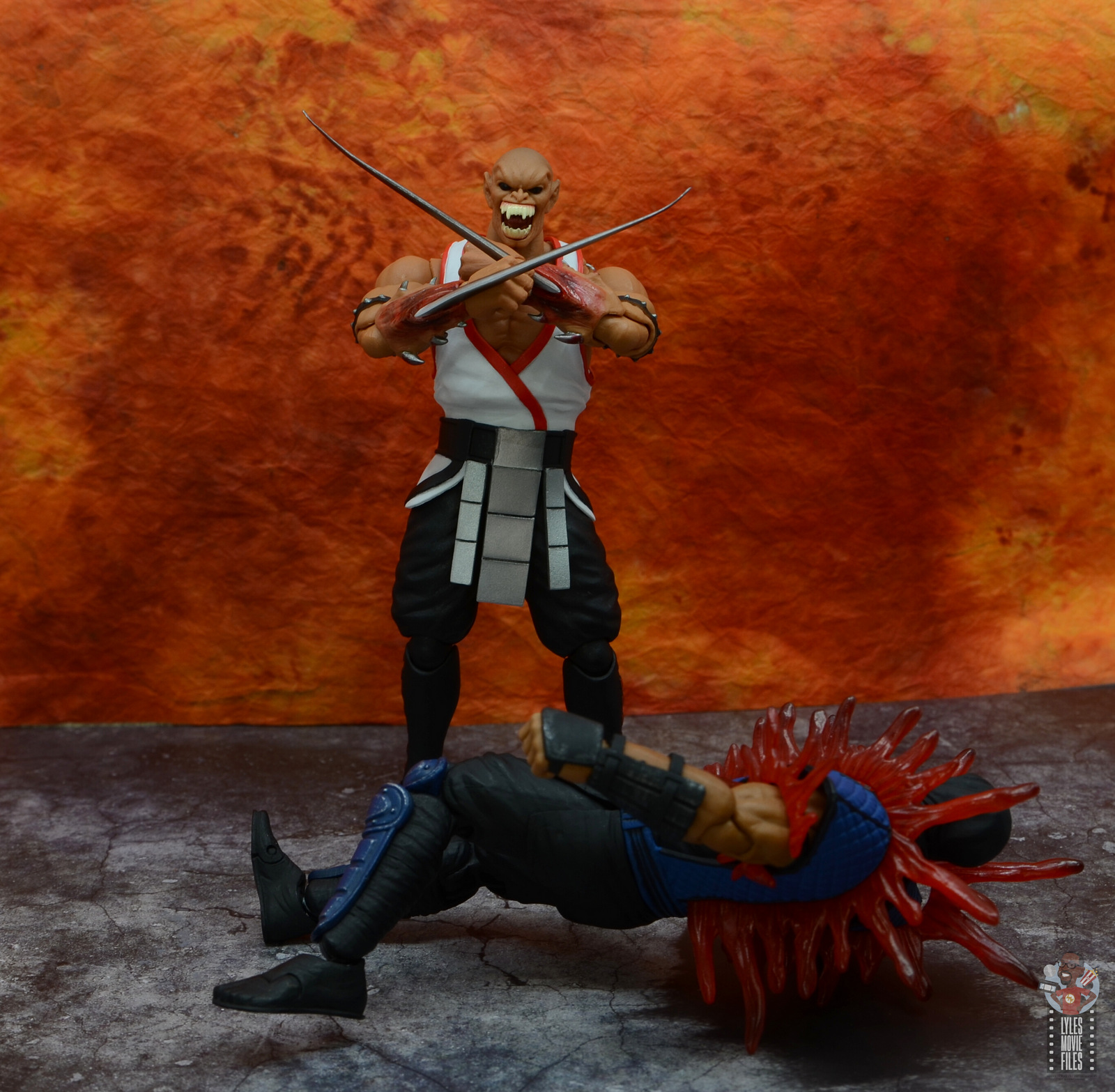 Worth It?  At $70, Baraka is in the lower price scale of this line. Given the unique parts, the soft plastic for the articulation and the amount of accessories, that’s a fair price for a line you’re not going to get at Target or Walmart.

Baraka is a great addition to the line and his unique look helps distinguish him from the various ninjas and cyborgs. Storm Collectibles did him right the first time so unless you prefer a different outfit, this is a definitive version of the character. 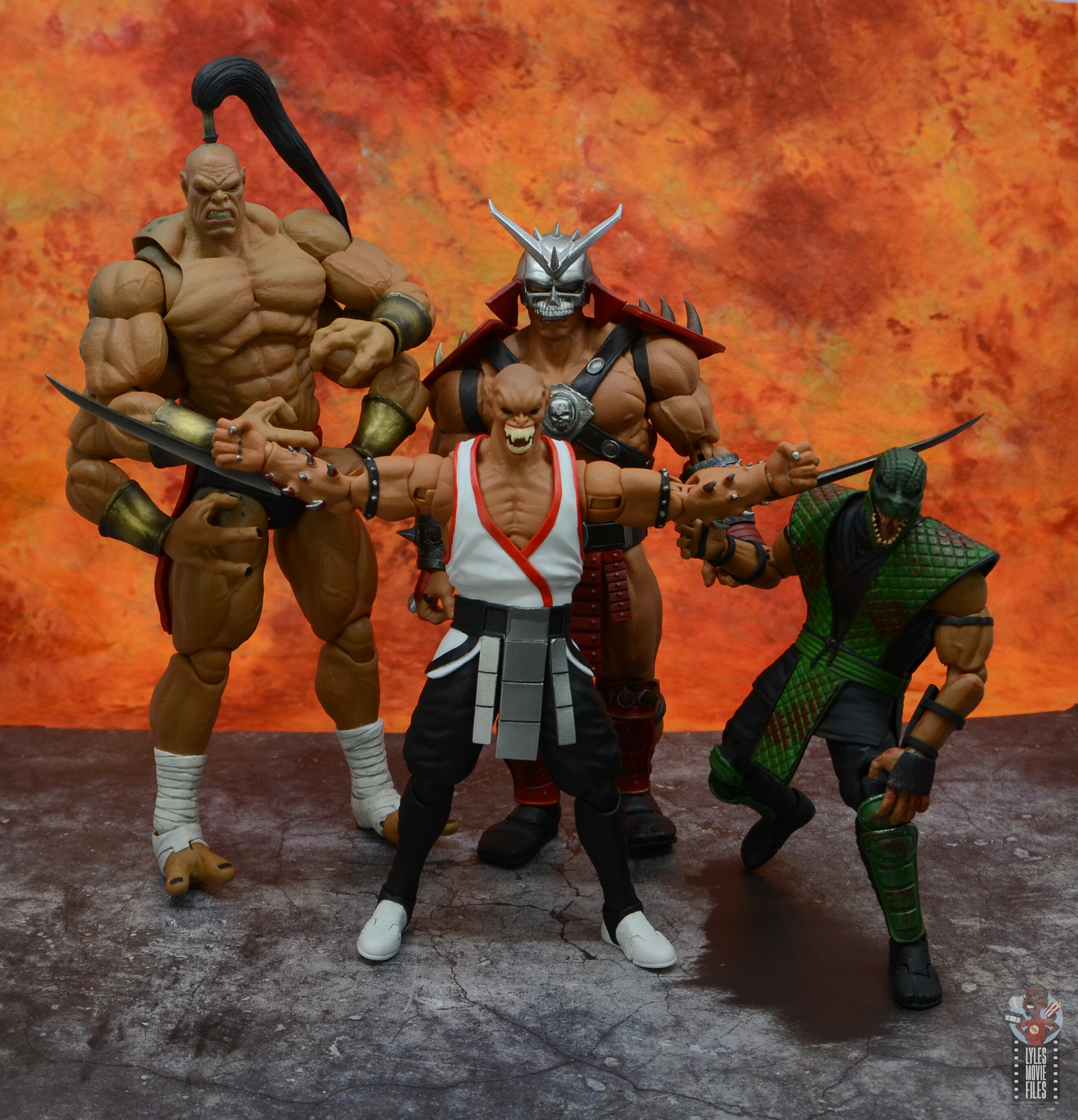 Where to Get It:  Baraka is sold out at most retailers, but you can still get him from Big Bad Toy Store for the standard price.  Or you could grab the new Mortal Kombat XI Baraka from McFarlane Toys if that’s more your preference.