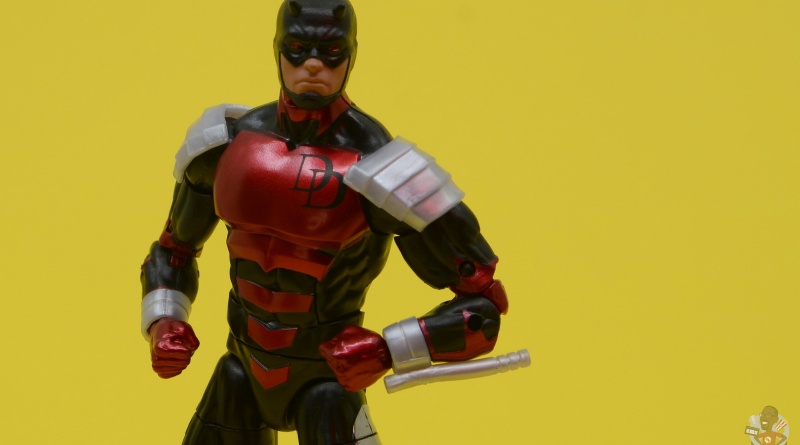 Daredevil is one of those characters like Spider-Man and Superman that early on got a great costume and there’s been little need to change it since. Occasionally an interesting variant will pop up, but they lack staying power.

Case in point this latest Marvel Legends version of Daredevil from the classic Fall From Grace storyline. Hornhead decided to level up with some armor plating and a largely black costume.

As far as variant looks go, this is one of the better Daredevil costumes and has been a quiet fan favorite of collectors. We’re probably overdue for an updated classic red costume, but this look has patiently its turn. Let’s see if it’s a figure only a 90s kid could love. 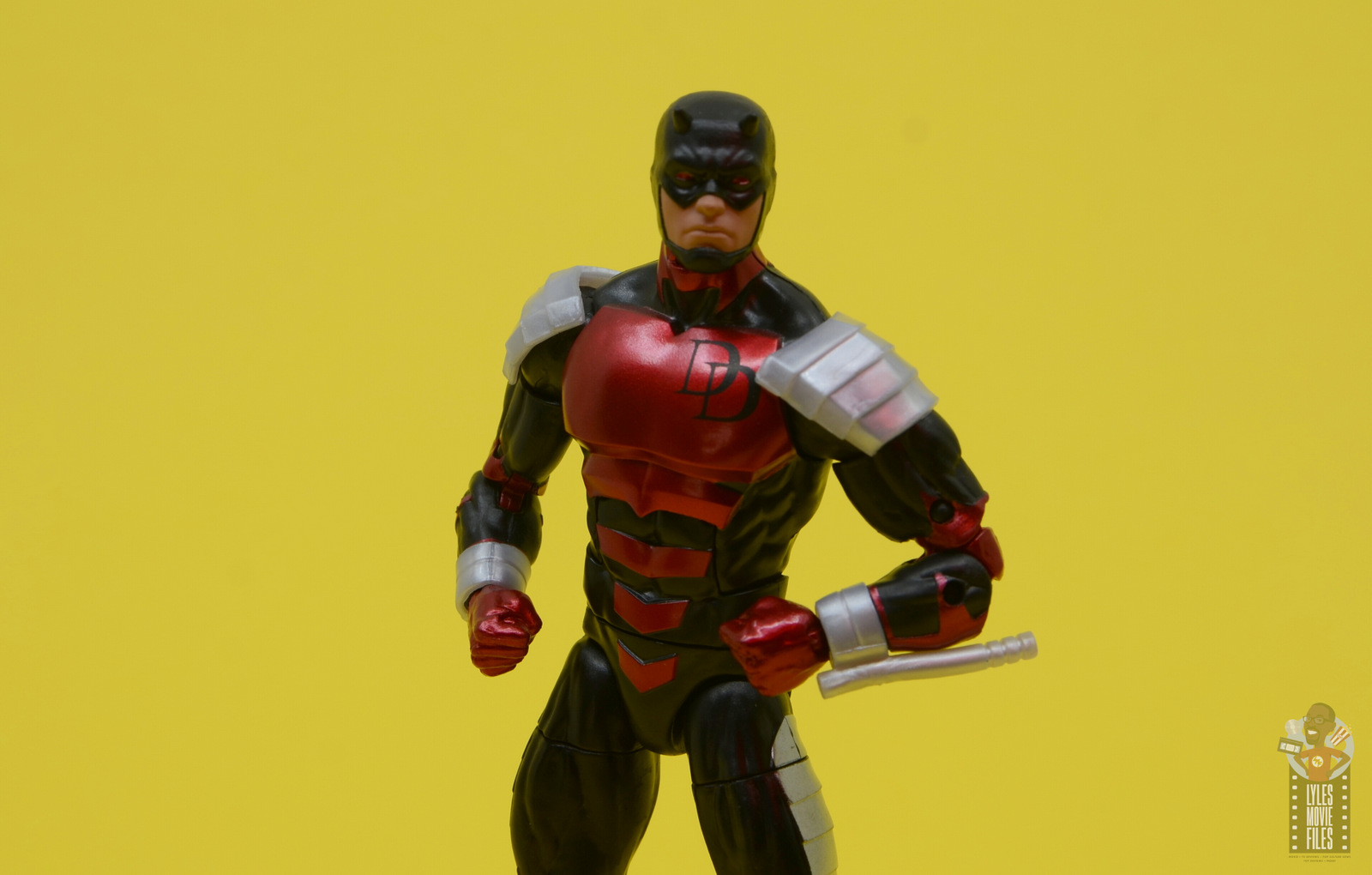 Packaging: Daredevil rocks the same Retro Collection package as the other figures in this wave with the color purple, yellow, red and orange color scheme.

All of the accessories are displayed clearly for close inspection. The bio is very generic and doesn’t explain this unique attire at all. 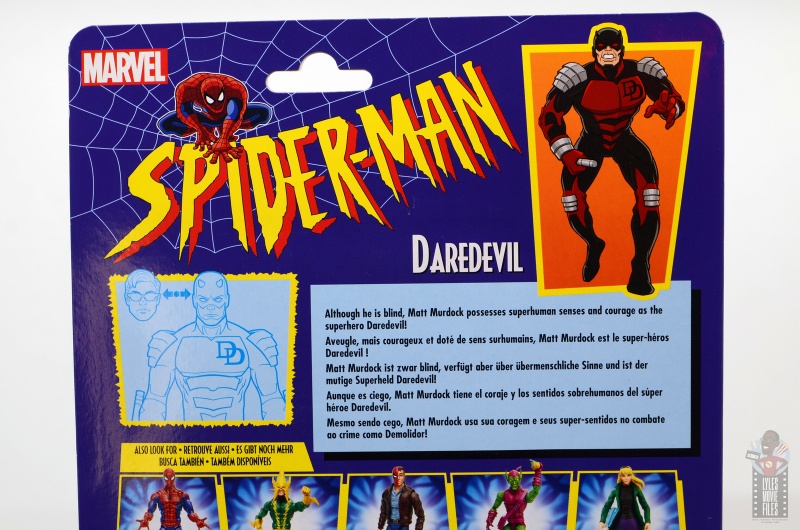 Likeness:  Hasbro did an excellent job bringing this design to figure form. It’s the kind of design that would look really crappy if the sculpt relied on paintwork to convey the segmented portions. Hasbro went all out and sculpted all of the various armor plating and segments throughout, including the neck and knees, resulting in a very sharp and very cool looking figure. 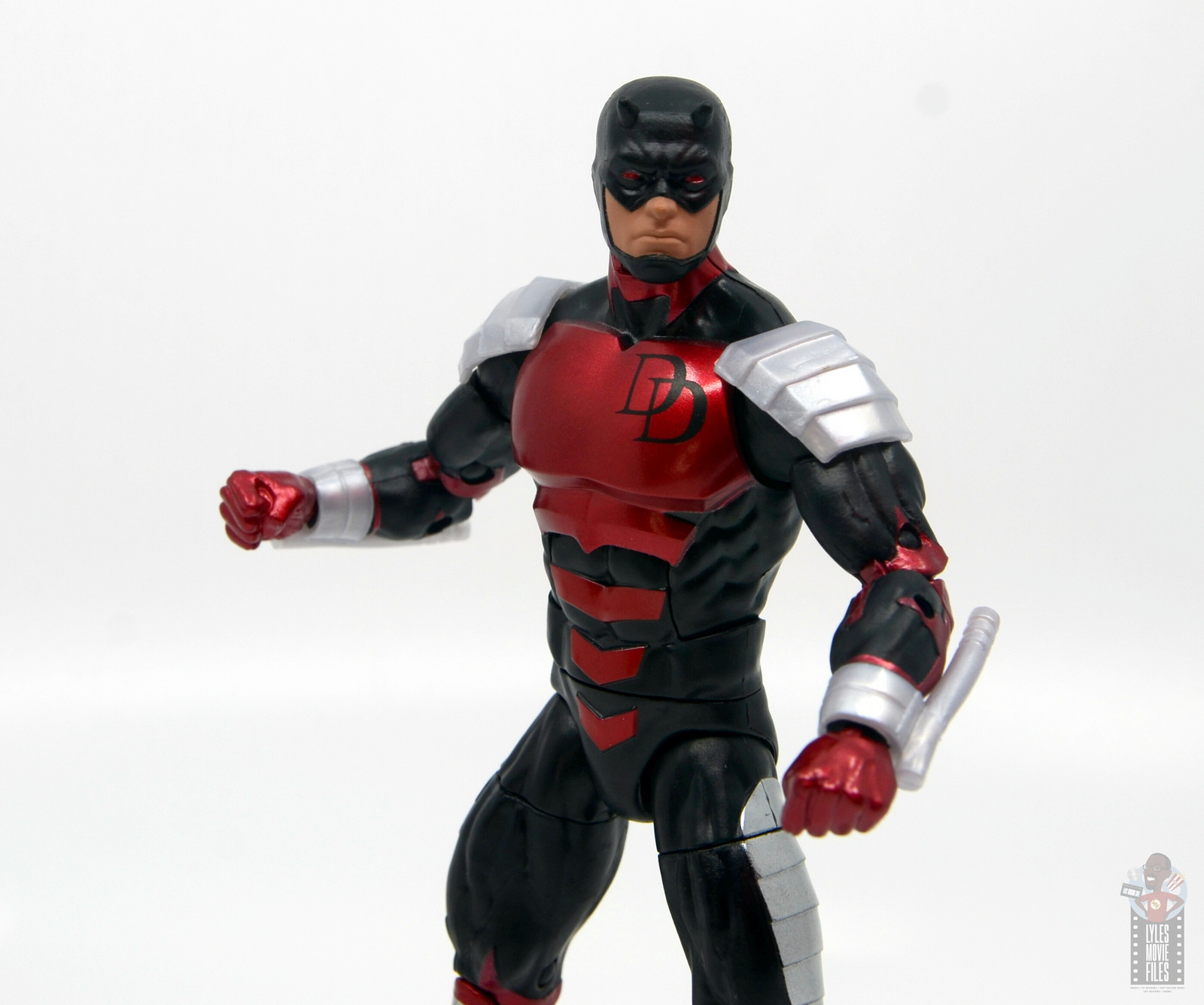 Originally, Fall From Grace artist Scott McDaniel drew this armor with harsher segmented armor plating almost like razor edges. This fit in with the tone of the extreme 90s where everything was edgy sometimes literally so. Hasbro softened the edges up on the plating, which seems like a more sensible and safer approach to the armor that also helps make it look far more streamlined and sleek. 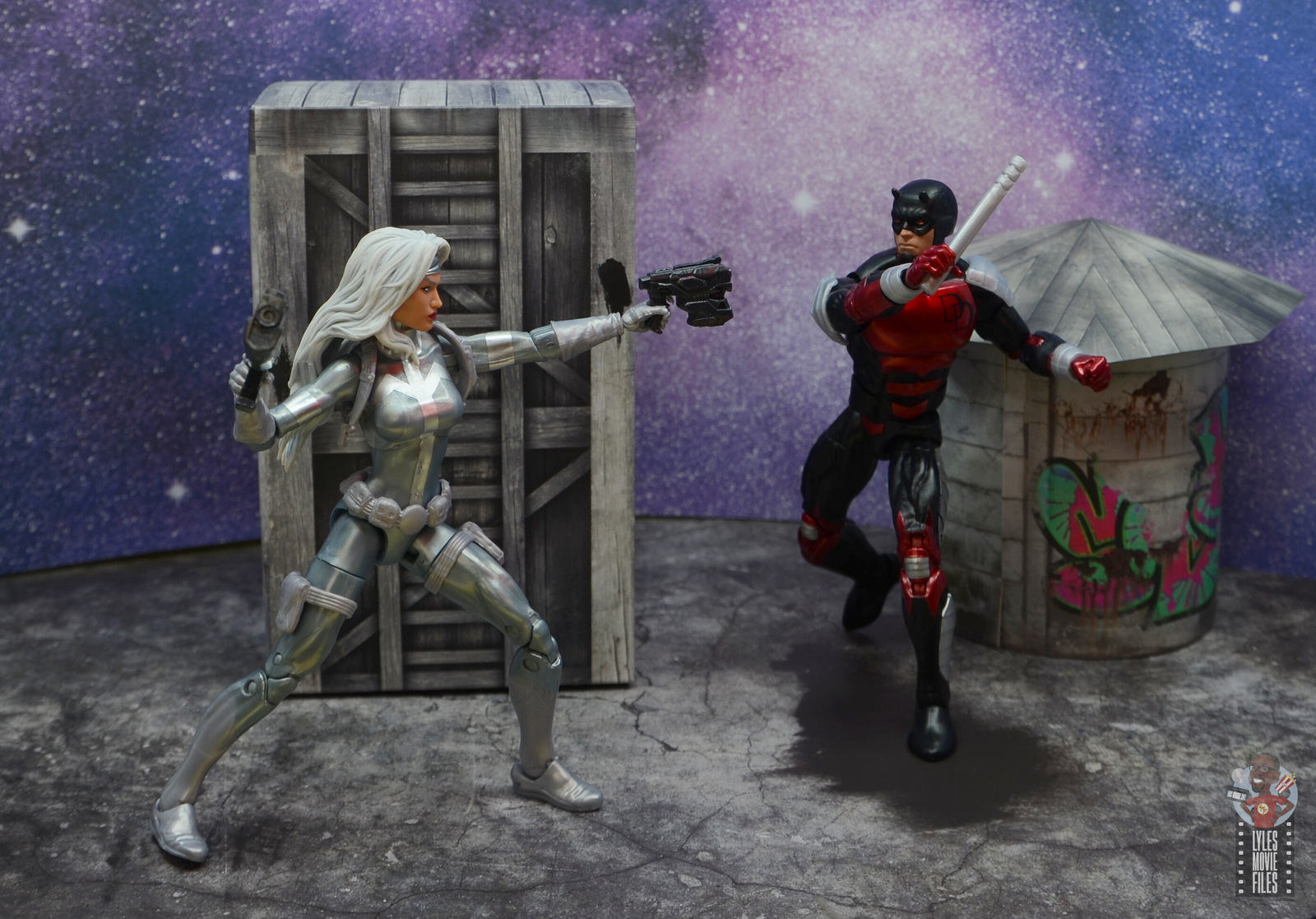 I’m pretty sure the head sculpt is new as it sports the chinstrap the other figures lack. The expression is fitting for the storyline as he looks more focused than usual. His forearms sport the non-removable escrima sticks he wears as this outfit lacks the thigh pouch.

Paint:  This color scheme is very striking with a bright metallic candy apple red contrasting with a flat black with a light silver.

The colors really pop and everything is very clean save an extra sloppily applied coat of silver paint on the right shin area. 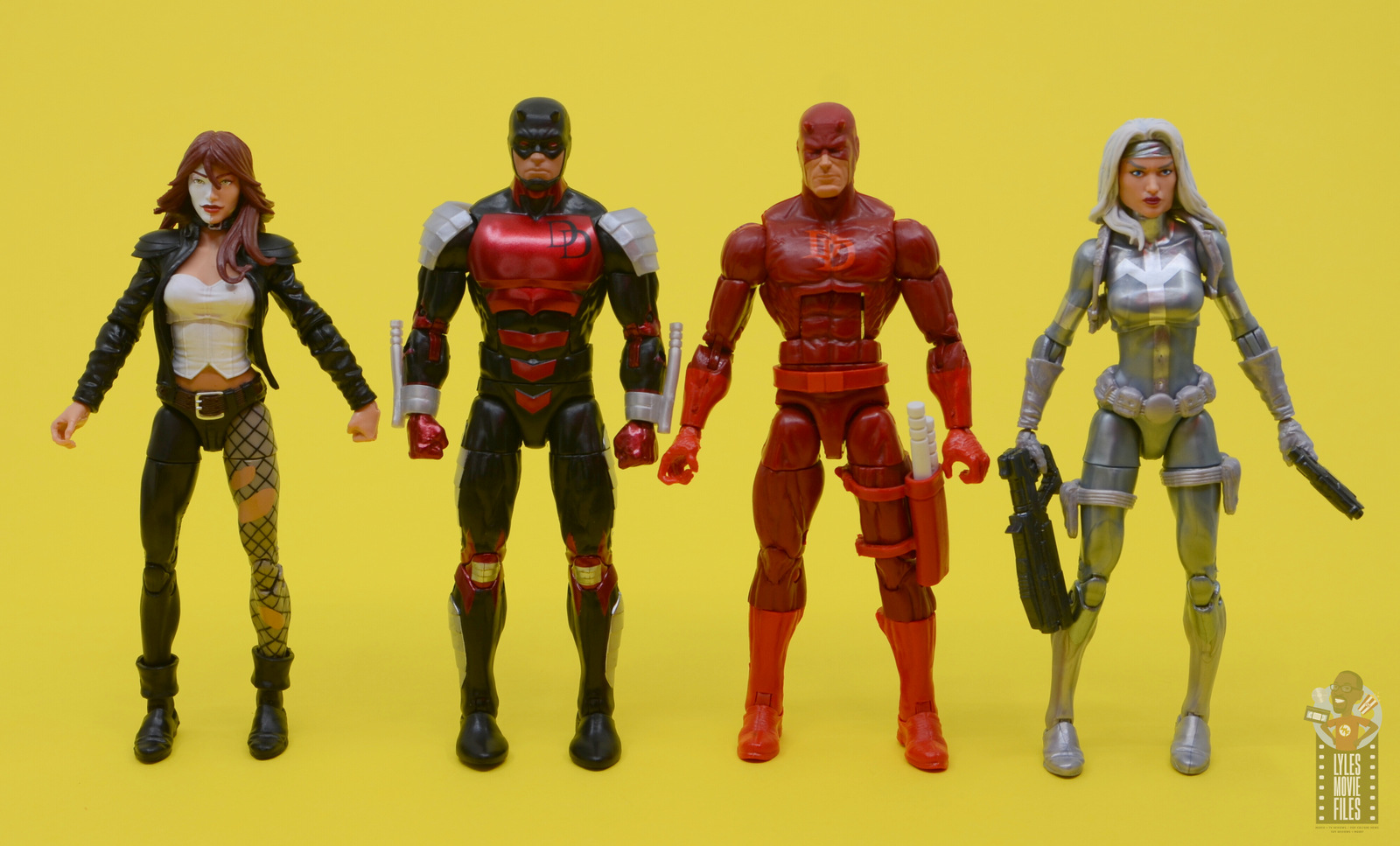 Scale: Daredevil is scaled about the same as the other figure although his head is a tad smaller. This creates an illusion that he’s shorter but he is regular height. Still, I’d prefer him to be a little taller than Spider-Man. 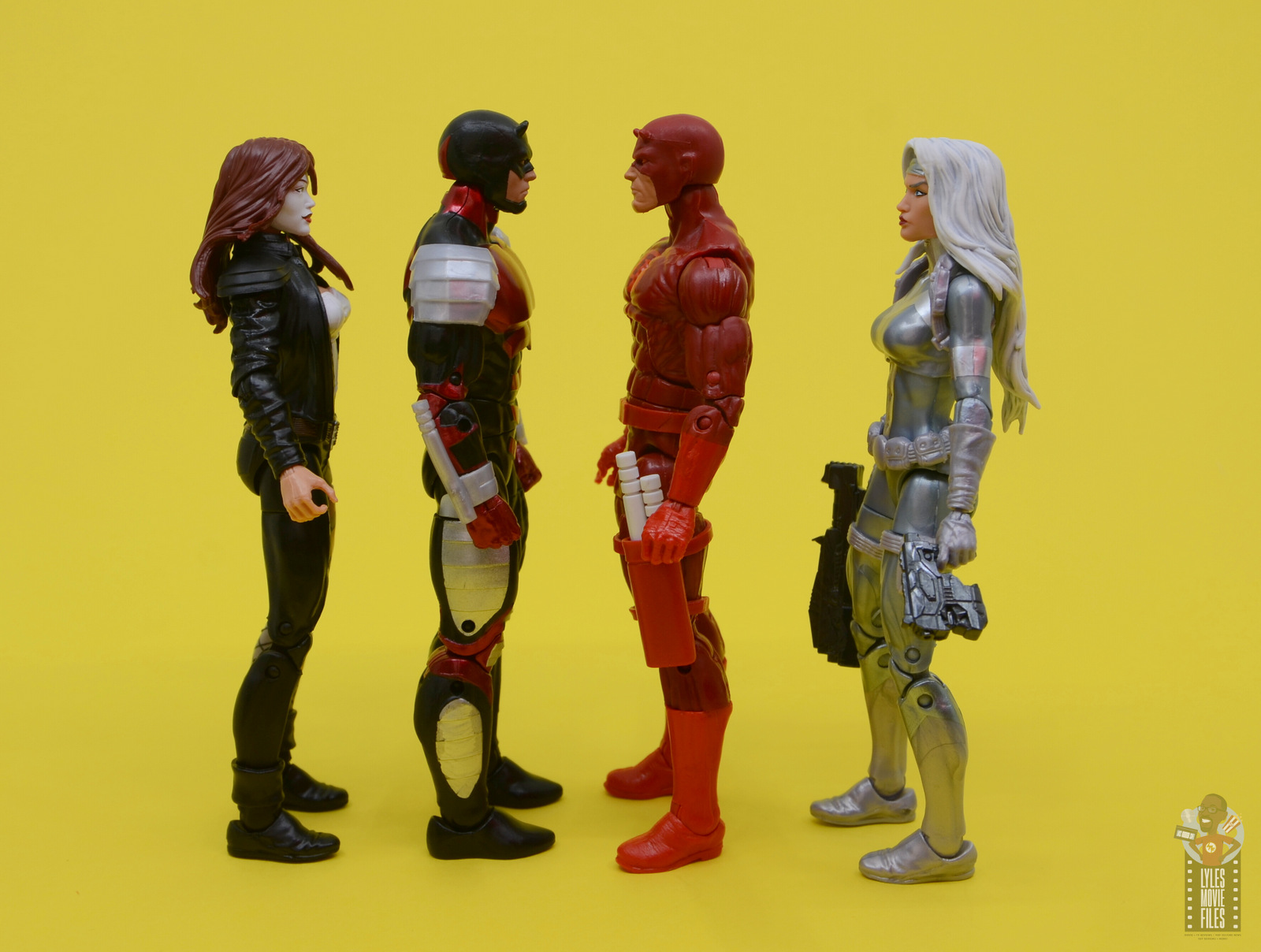 Articulation:  DD is one of those flipping, acrobatic heroes that needs to have full range of movement to best showcase his fighting style. 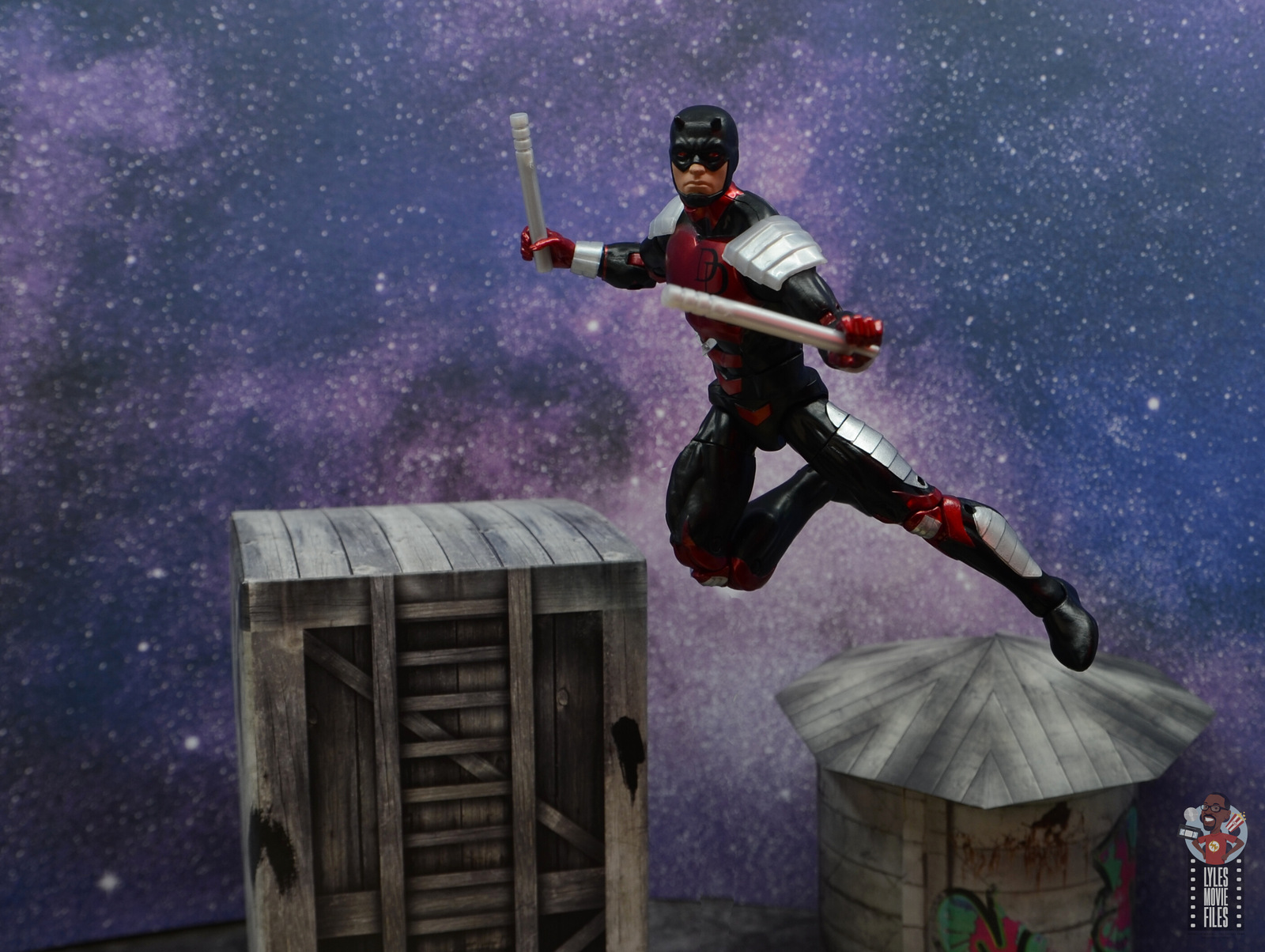 The shoulder pads don’t restrict anything and Daredevil can hit most of the signature poses you’d expect from him. 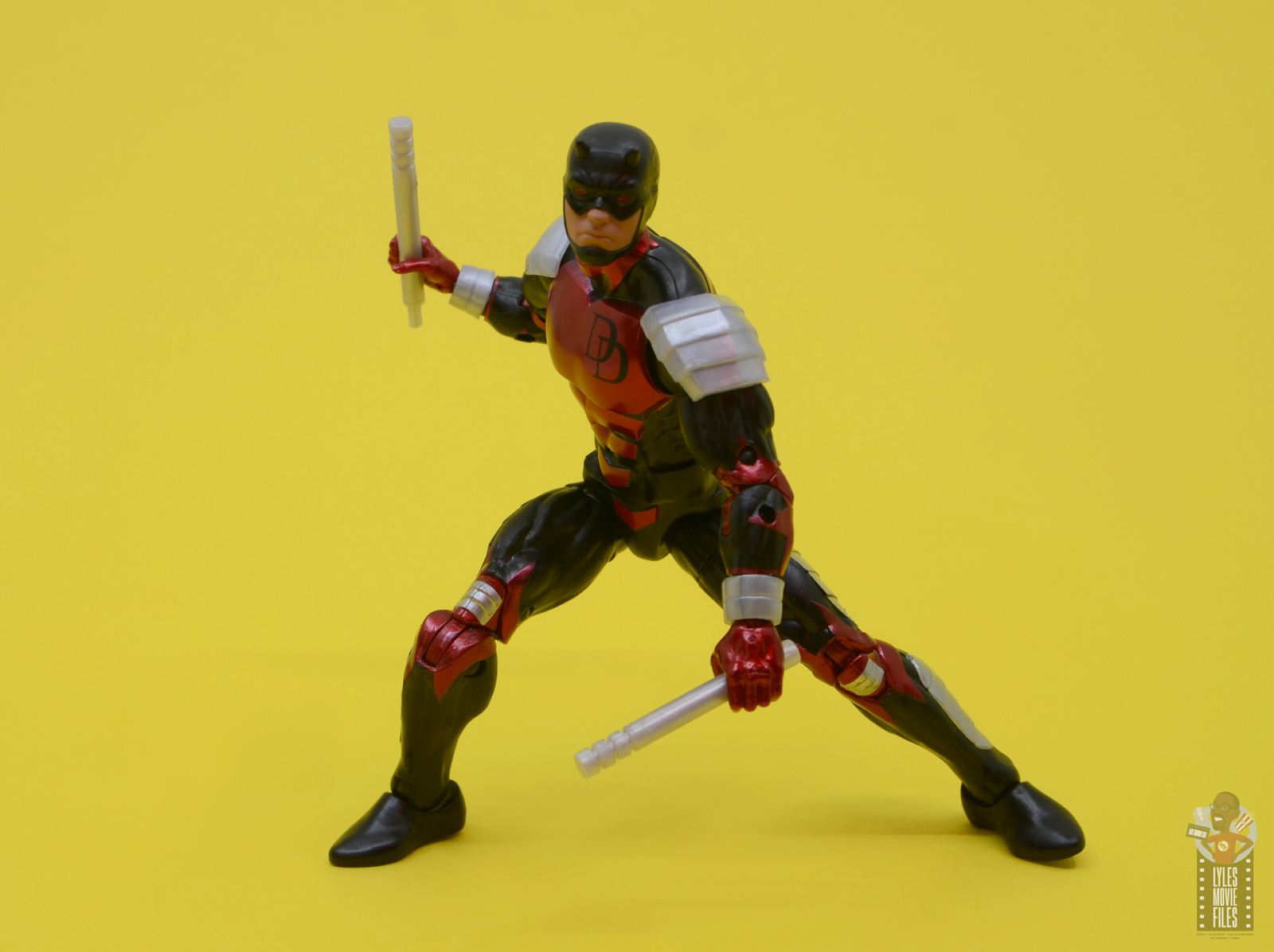 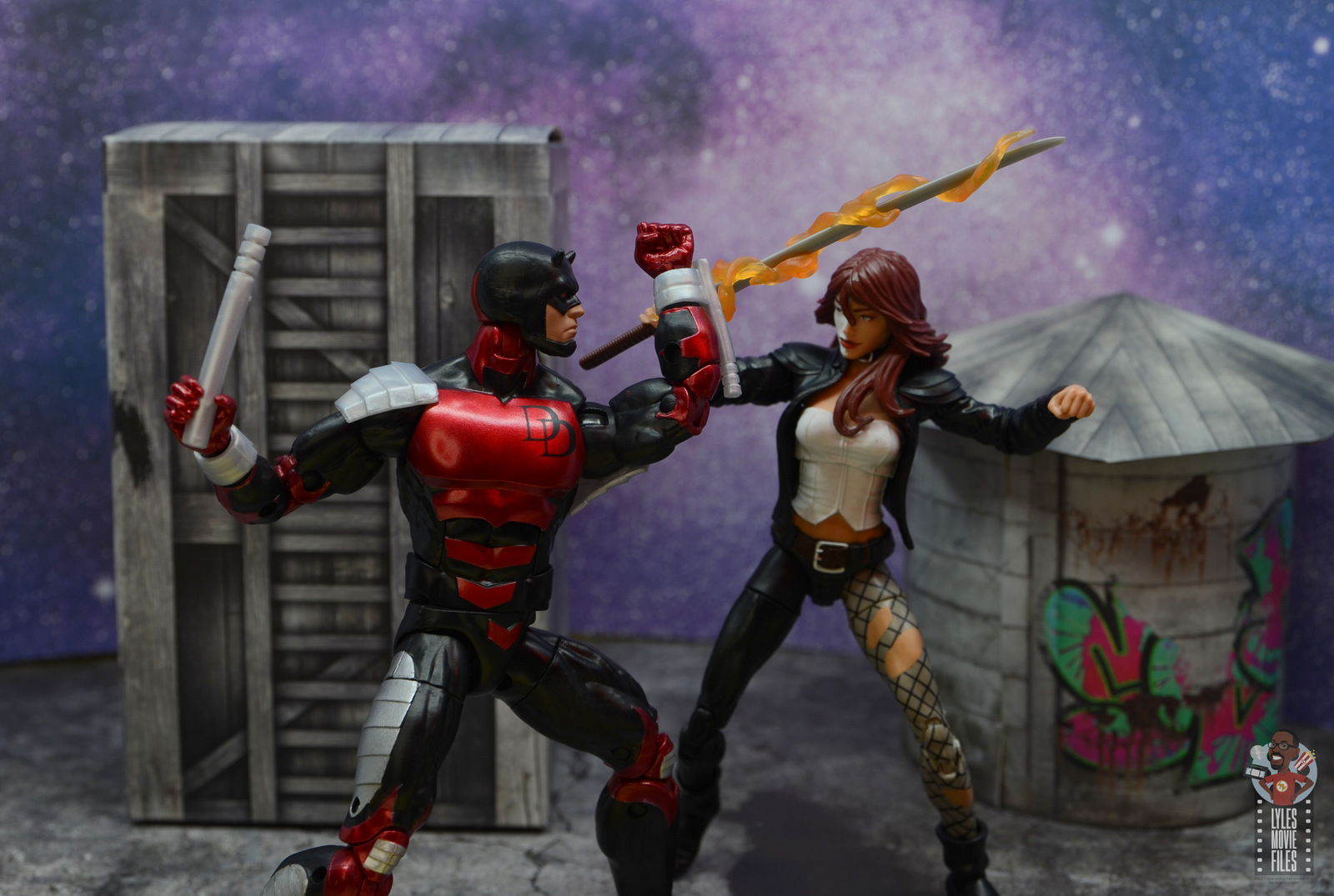 Accessories:  Daredevil gets his escrima sticks. They’re cast in toy grey and look a little non-distinct although they do look better in this color than the pure white. 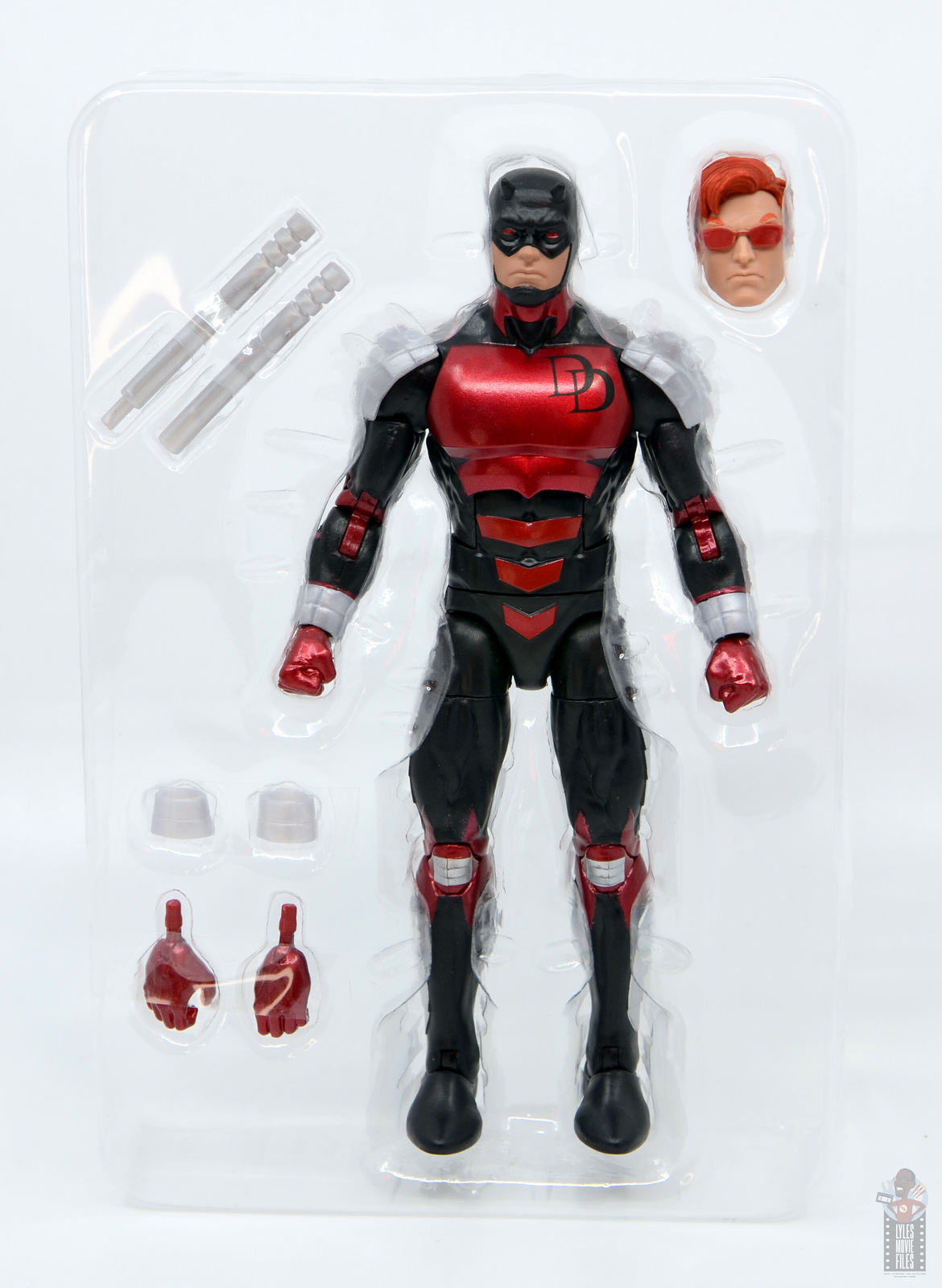 These are to be used with the swappable wristbands, which lack the stick handles for a cleaner visual. That’s a nice touch and an extra step I wasn’t expecting. Nice job Hasbro. 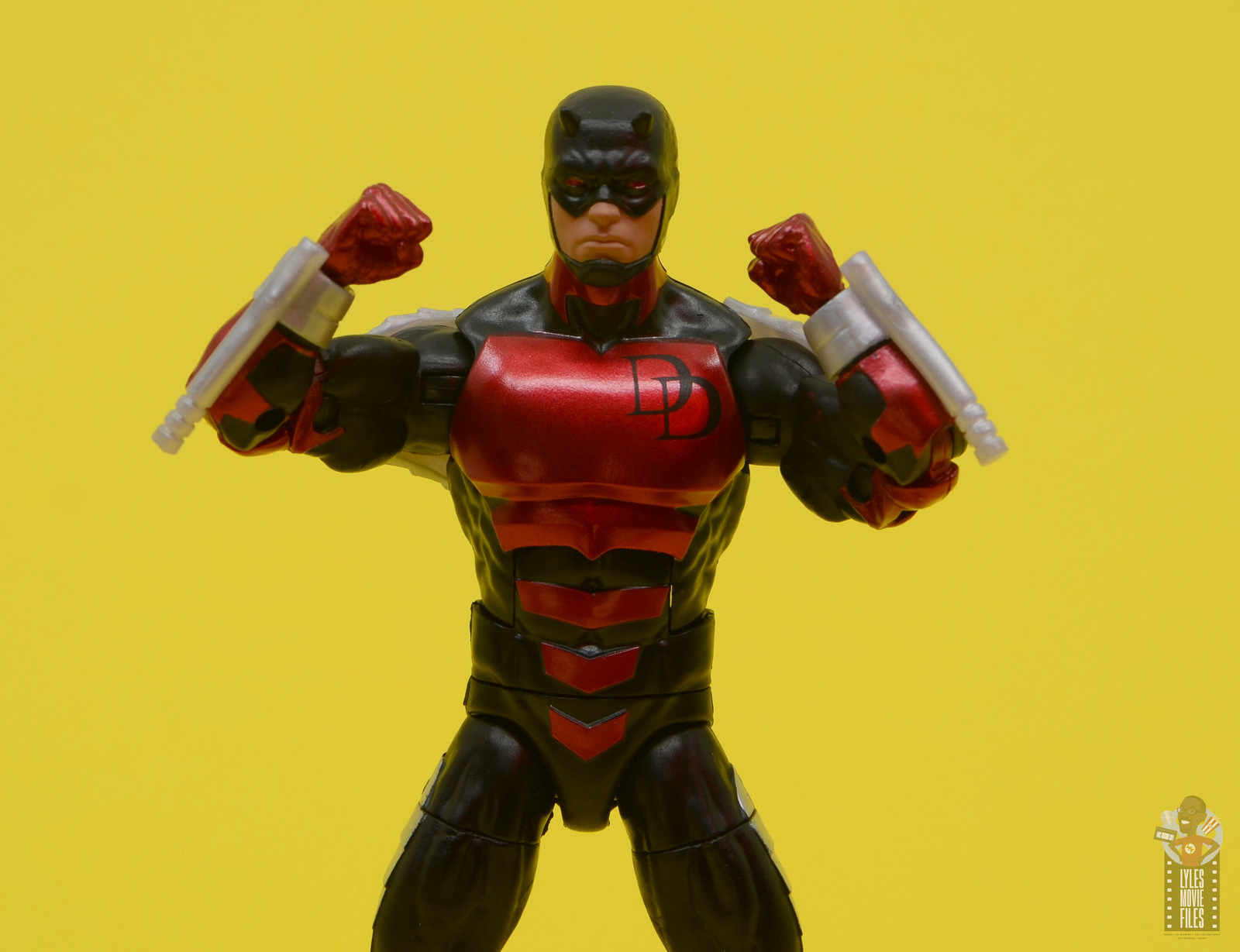 These match up with the gripping hands (naturally) and they’re cast in the same metallic red as the rest of the red plating. 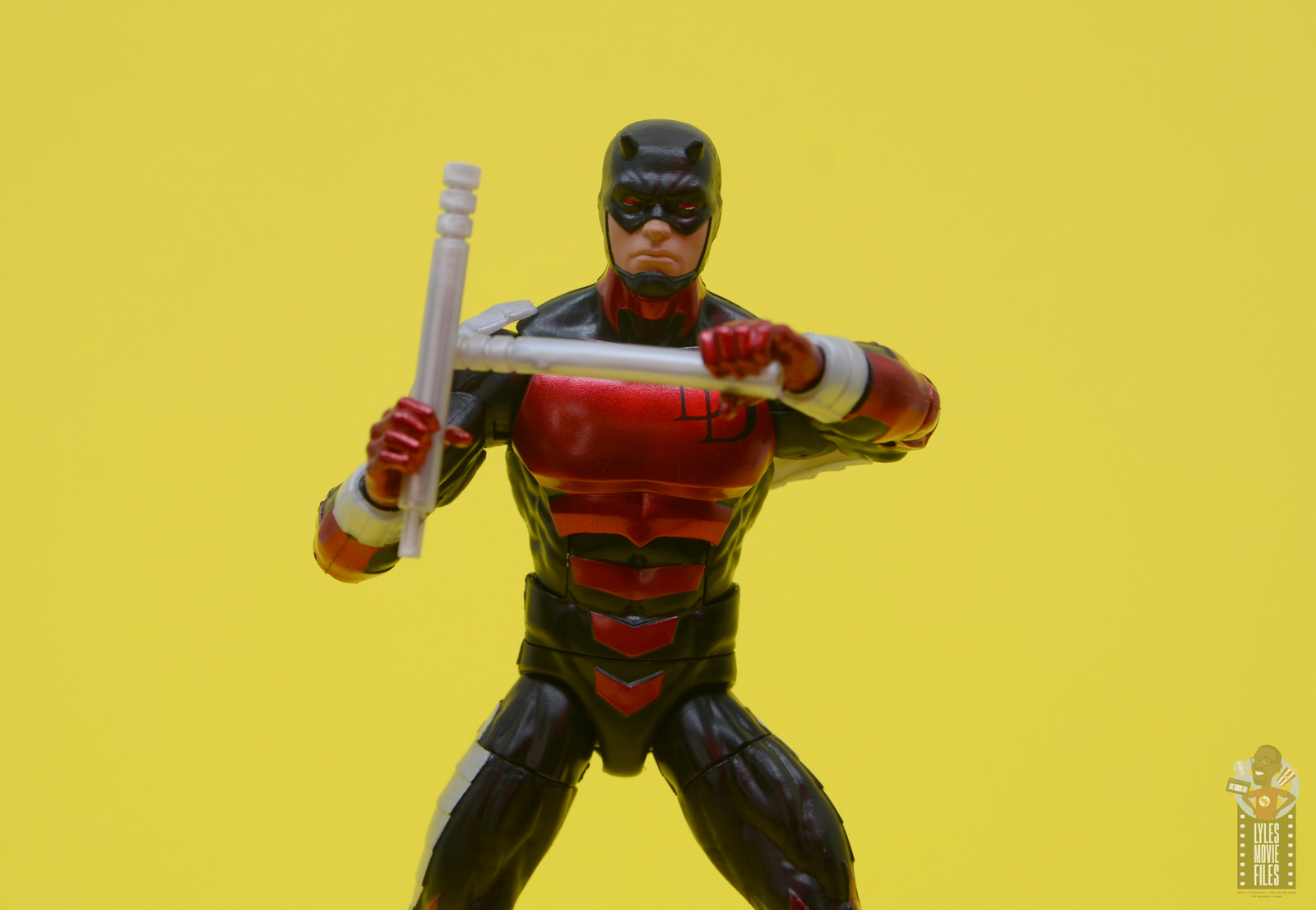 Finally, he comes with an unmasked head. I think this is from a Cyclops figure with some significant retooling around the hairline. 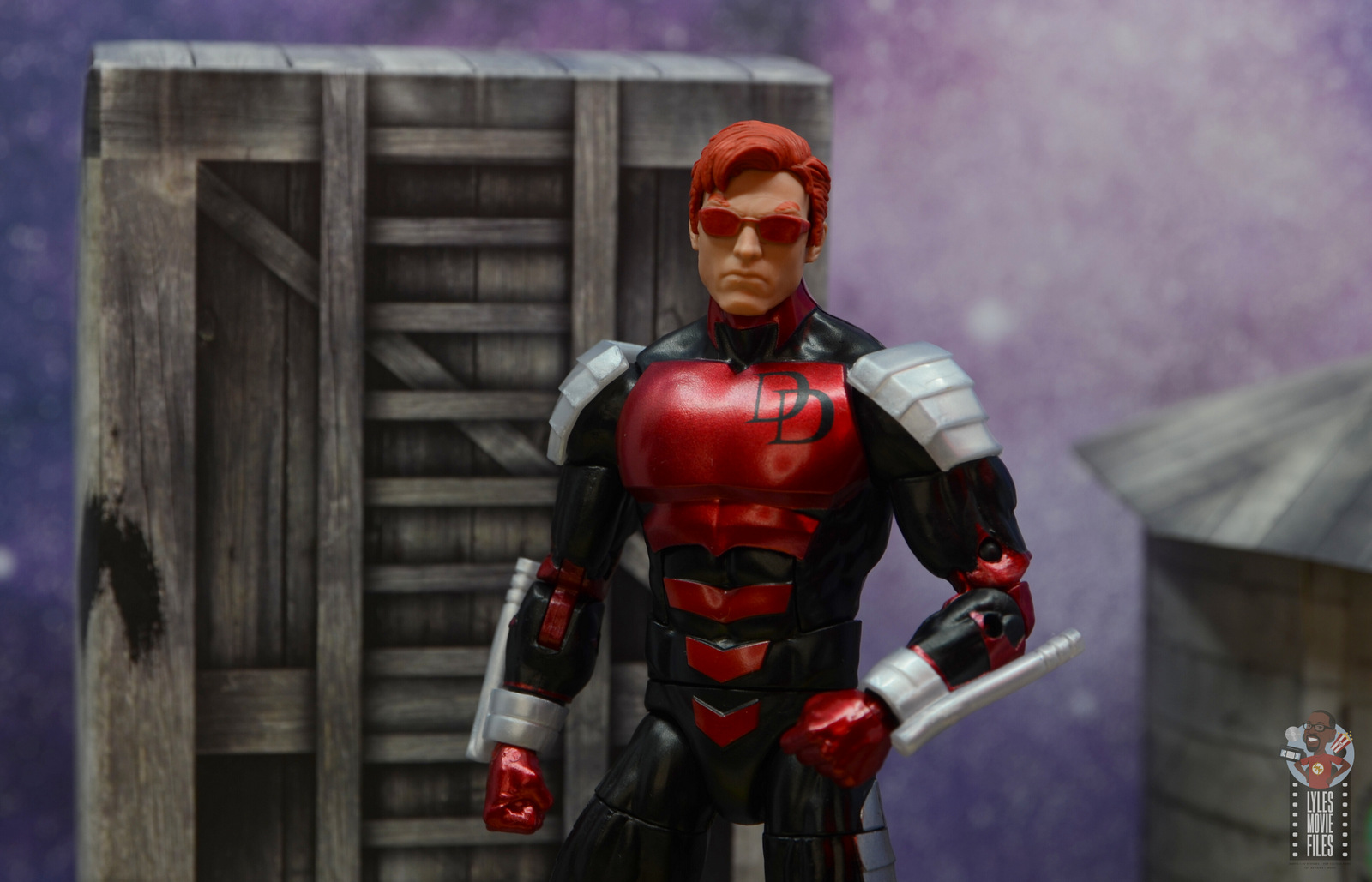 It’s enough difference that it doesn’t feel like some of the Mary Jane for Black Widow swaps Hasbro attempted recently. 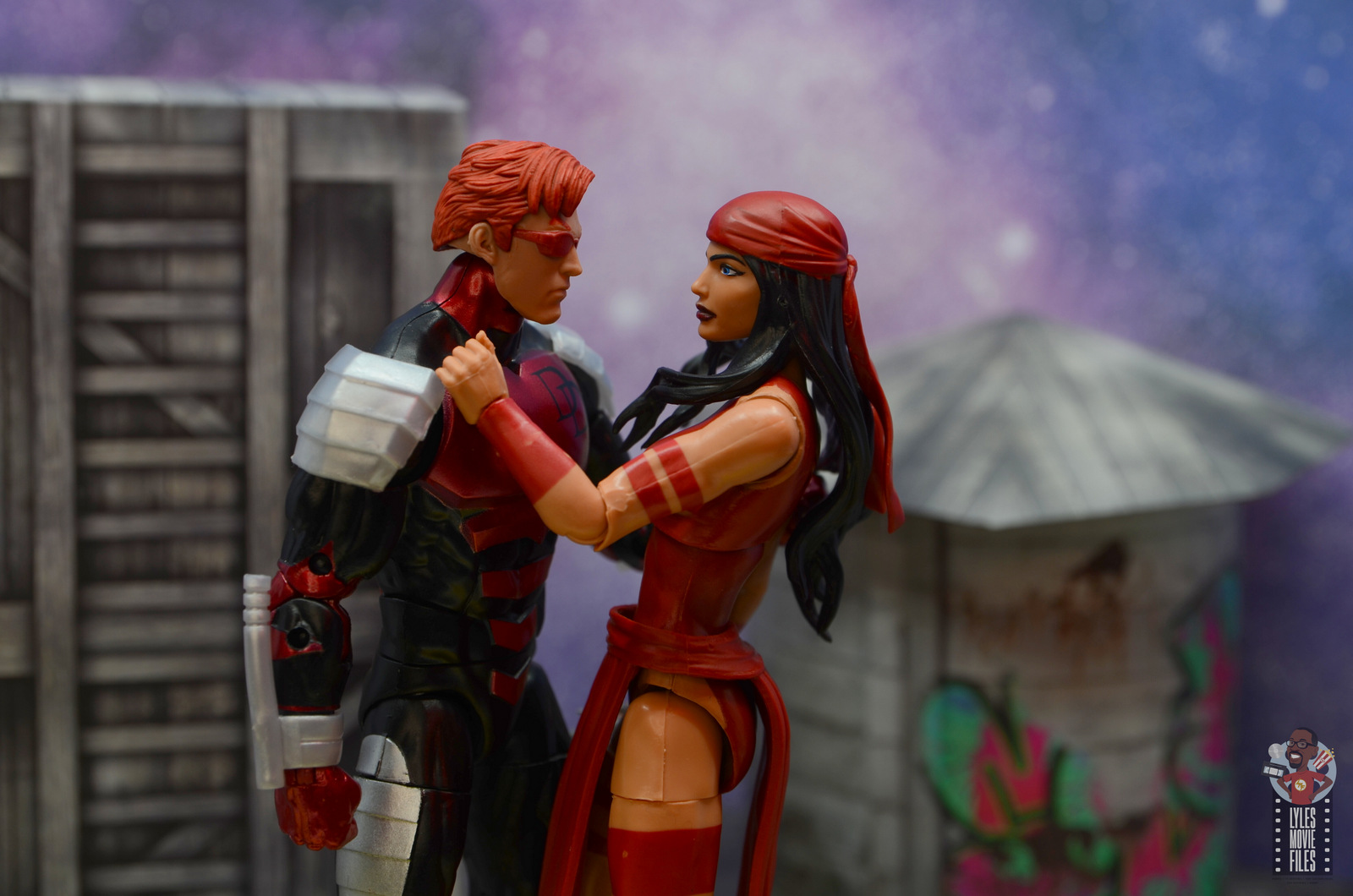 Worth it?  Daredevil is available for under $20. He’s a good deal for that price considering the original sculpt and accessories even with the lack of a Build-A-Figure piece. 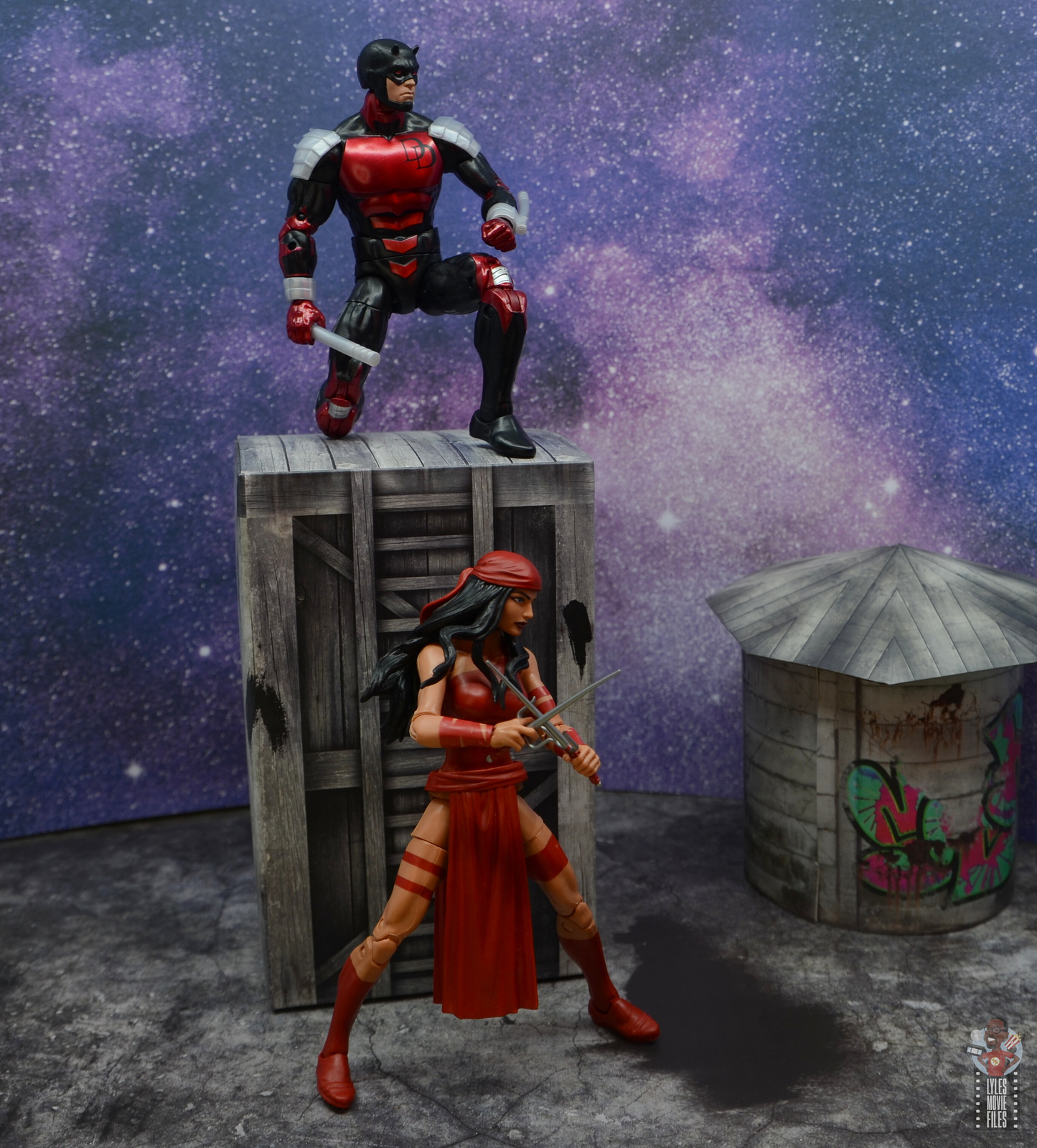 This figure was a real nice surprise even with that random paint on the shin problem. I got him for Christmas and took too long to review. Otherwise he would have cracked my Top 10 of 2020 Marvel Legends list easily. 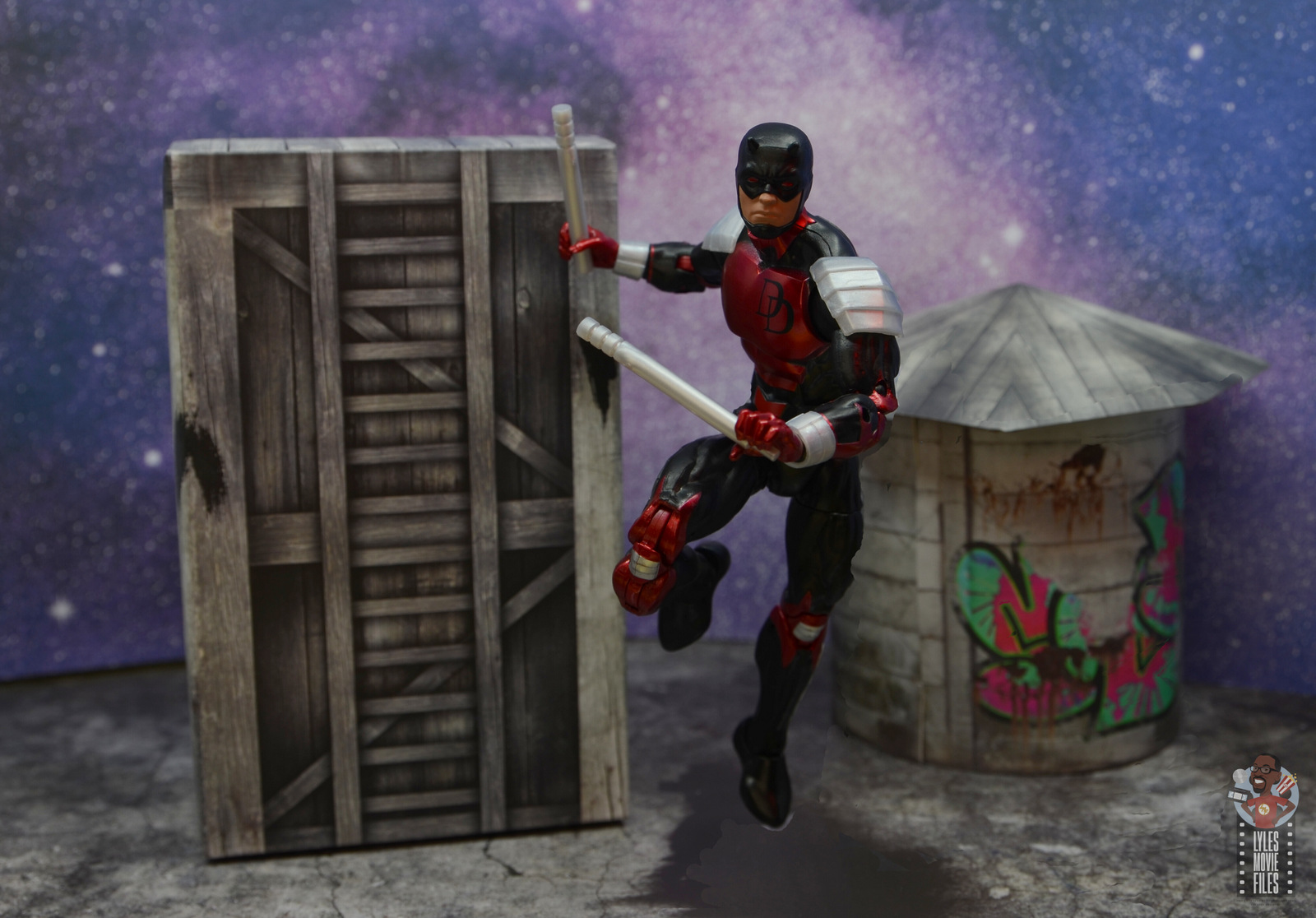 Where to get it?  You can grab Daredevil from Amazon and Hasbro Pulse.