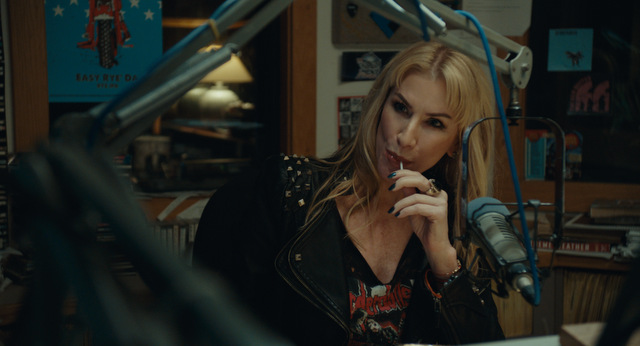 This is a weird and disjointed effort that left me seeing red for an entirely different reason.

Amy (Caroline Williams, The Texas Chainsaw Massacre 2) got bit by a bat on her way to her radio station. Typically this might be cause for an alarm — or at least a rabies shot — but Amy doesn’t miss episodes of her talk show, Ten Minutes to Midnight, under any circumstance. Even if the station is getting bombarded with a massive hurricane.

But this is becoming a very bad night as Amy meets her younger replacement, Sienna (Nicole Kang), much sooner than expected. Maybe Sienna got the gig from sleeping with station host Bob (William Yoomans), the same sexually harassing sleazebag that hooked up with Amy decades ago. 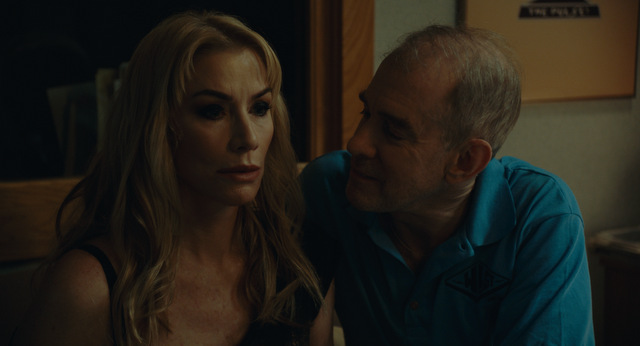 Regardless, Amy isn’t thrilled to see Sienna sharing her booth and immediately sets out to make her farewell show a memorable one for everyone involved. This triggers some massive bloodlust as Amy starts acting a bit…vampiric.

Director/co-screenwriter Erik Bloomquist and sibling co-writer Carson Bloomquist try to avoid being too obvious right away. They tease the vampire transformation with subtle gags like Amy refusing a dinner with garlic and a co-work creating a stake.

Things start getting progressively weirder like when Amy realizes she’s famished and starts slurping on a tampon. Yep, that’s the point when it’s time to start questioning how much longer of an investment you might want to make in this movie.

Soon, Amy starts having nightmarish visions that increasingly makes it harder for her — and the viewers — to determine what’s real and what’s a hallucination. The Bloomquist Brothers opt to make Ten Minutes to Midnight more of a head trip horror than a usual slasher, but there’s plenty of gore and cringe-inducing sequences throughout.

They’re well done and have the appropriate sense of dread and tension necessary to pay off the setup. 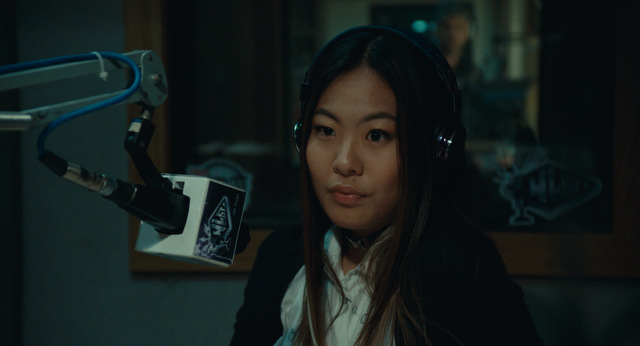 These are the scenes that suggest the Bloomquist Brothers would do amazing work on a more standard horror film given a larger budget. The set is relatively small-scaled, but Erik Bloomquist stages the film so it doesn’t feel cramped or everything is occurring in the same three of four rooms.

While those scenes are effective, another gimmick where the actors swap in and out to play younger/older versions of the characters or switch gender roles isn’t as well done. These come off more like a decent idea that isn’t executed as well and play out too long.

The soundtrack, full of heavy metal jams, is jarring and noisy for no reason serving more as a distraction than anything else.

Williams makes Amy an unusual protagonist, one wrecked with just as much anguish and regret over how she’s spent her life as she is the possibility of becoming a killer vampire. Williams handles the nuances of Amy’s journey/potential breakdown.

Kang, ironically, has established herself as a key supporting character on the CW’s Batwoman and she makes for a solid foil for Williams. The rest of the cast is fine

For horror heads searching for something new, Ten Minutes to Midnight might pack enough bite while for casual thriller fans looking for a fun scare this might be too drastic a departure from the norm.