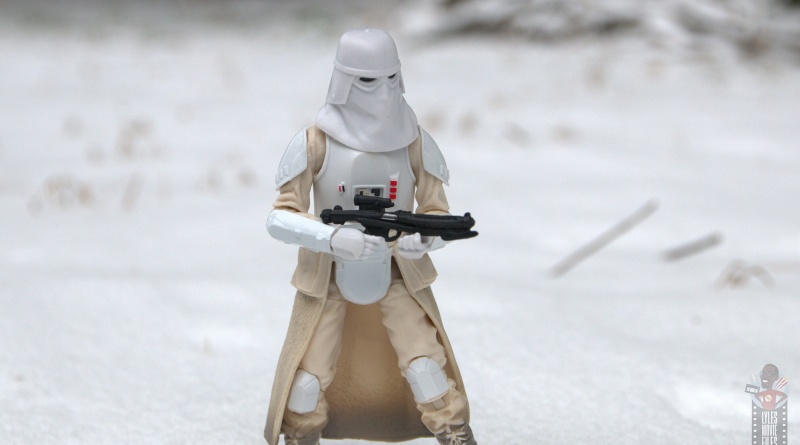 Of all the variant Stormtroopers the Imperial Snowtrooper is by far my favorite. I loved the hooded look and the sinister eye slots along with the skirt that showed that while he was a terrible person, The Emperor believed in keeping his cannon fodder warm. Along with the standard Stormtrooper, the Imperial Snowtrooper is really the only one I want for massive army building purposes.

Since I slacked off in getting the standard version, it looks like I’ll be stockpiling the 40th Anniversary The Empire Strikes Back vintage style versions.

Packaging:  I’m a sucker for this packaging as it more or less recalls how the figures looked when I got them as a kid, just smaller. There’s a foil sticker for the 40th anniversary tag and even the classic Kenner logo, which is a very nice touch.

The back doesn’t feature a bio of the Snowtroopers and instead just shows the rest of this rollout of anniversary figures. 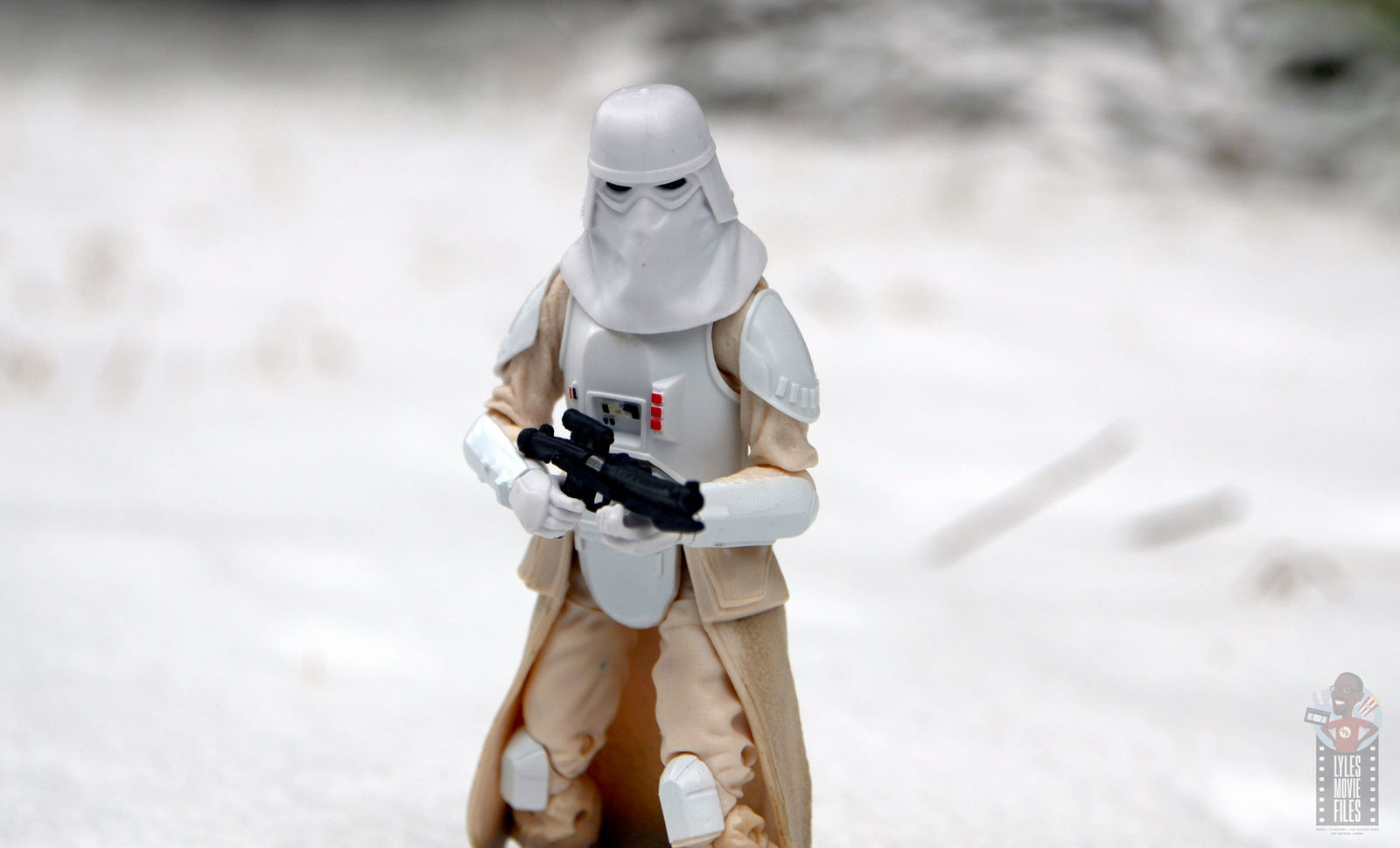 Likeness:  This is one of my all-time favorite Star Wars designs as it takes elements of the standard Stormtrooper outfit with the chest and codpiece armor and incorporates the environment for the troopers to traipse around in a snowy setting.

The hood is the most important element and the sculpt nails it right down to the head outline, nose indention and the flair out of the bottom half. Detail work on the chest piece is also very nicely done and the armor pieces look great. 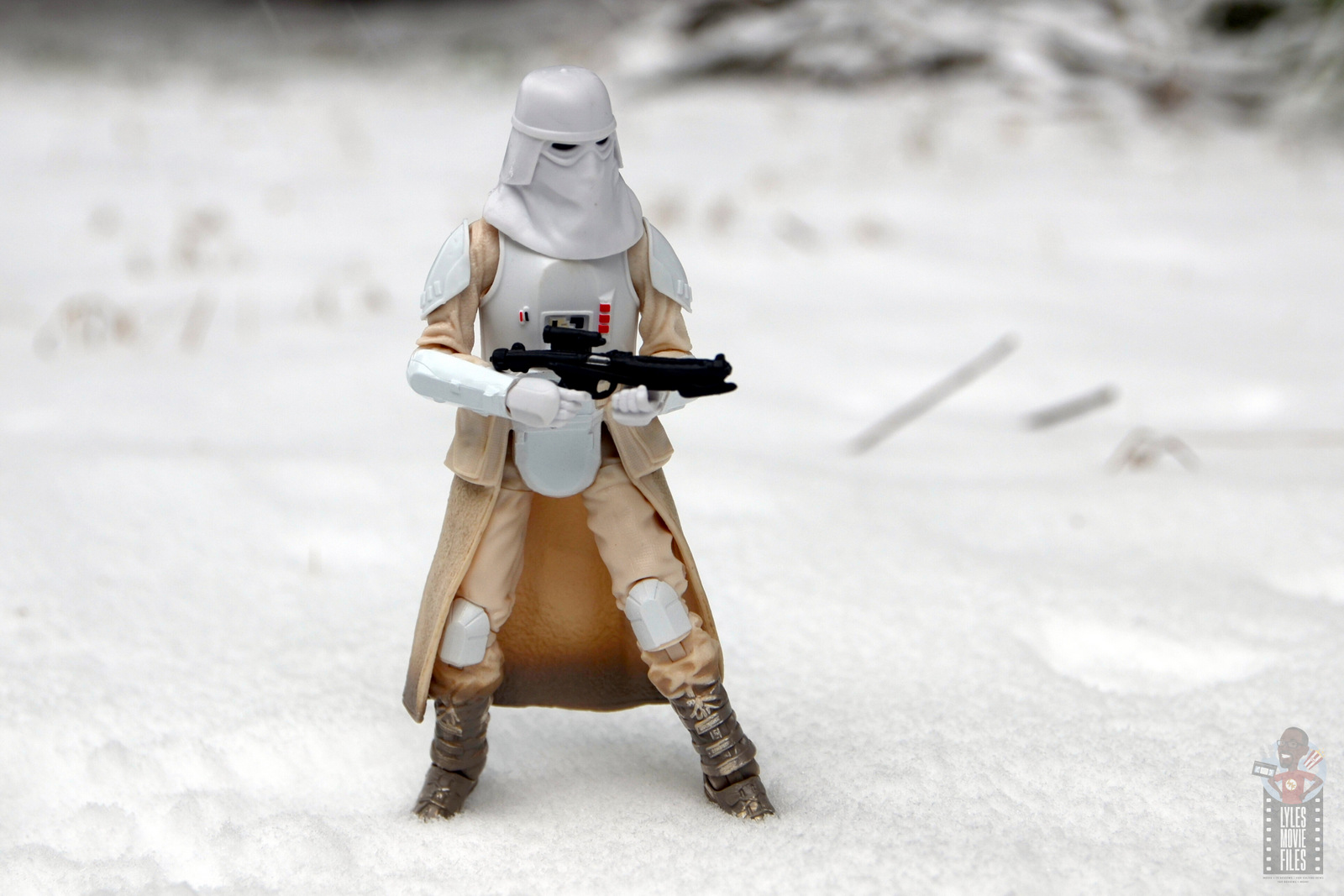 Hasbro opted for a hard plastic piece for the skirt, which is probably a smart option since collectors/figure photographers are likely to take this guy out in the snow — if available — and the cloth wouldn’t look as nice over time. The boots are a sneaky terrific element as well with the wraps. And the big backpack is included as well. 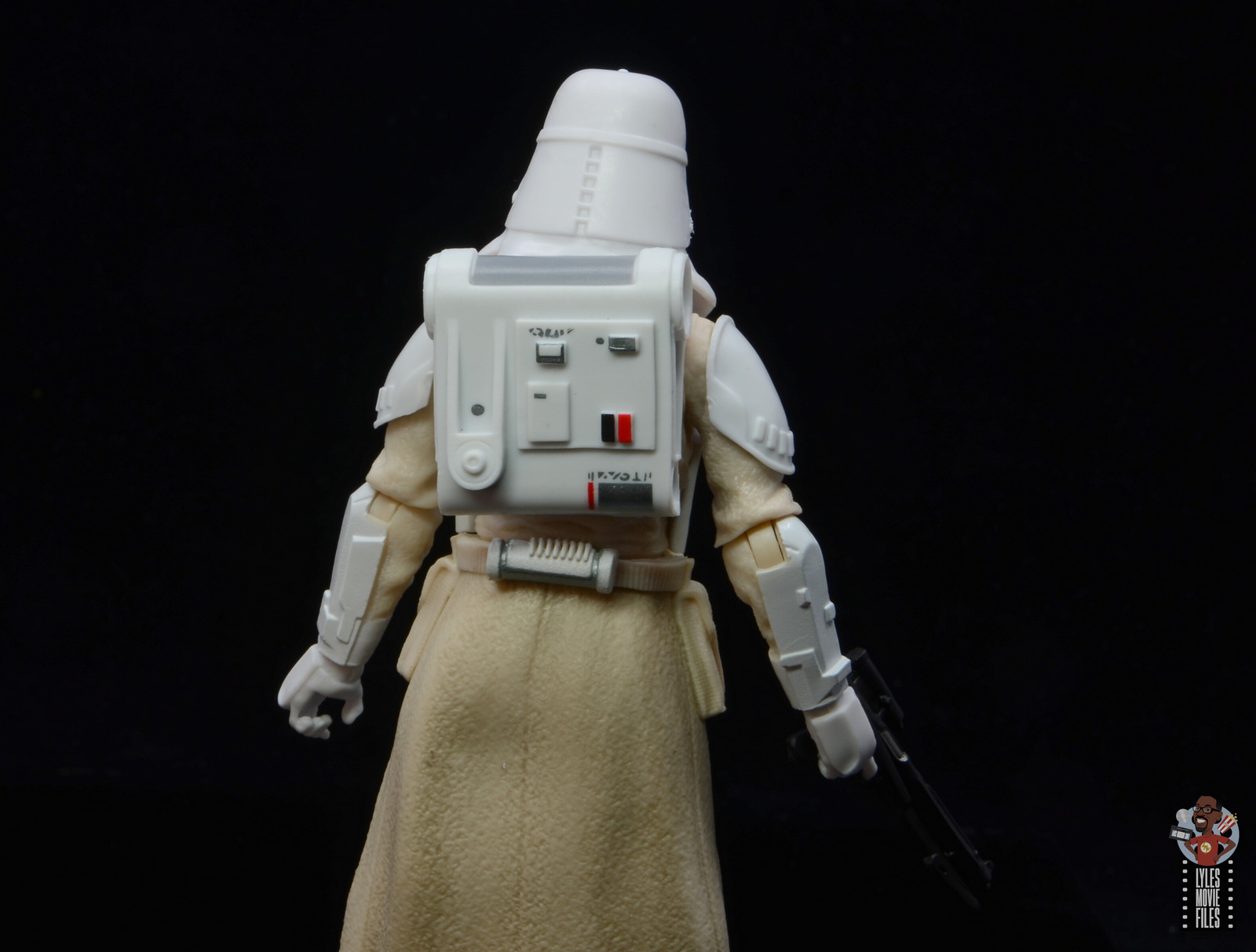 Paint:  I’ve always considered this attire to be all white but reference photos show a tinge of cream/light brown in the skirt, pants and boots. I think it’s a light trick, but other pictures show it’s more off white than cream.

For the sake of photography in snow, this distinction is probably better anyway. 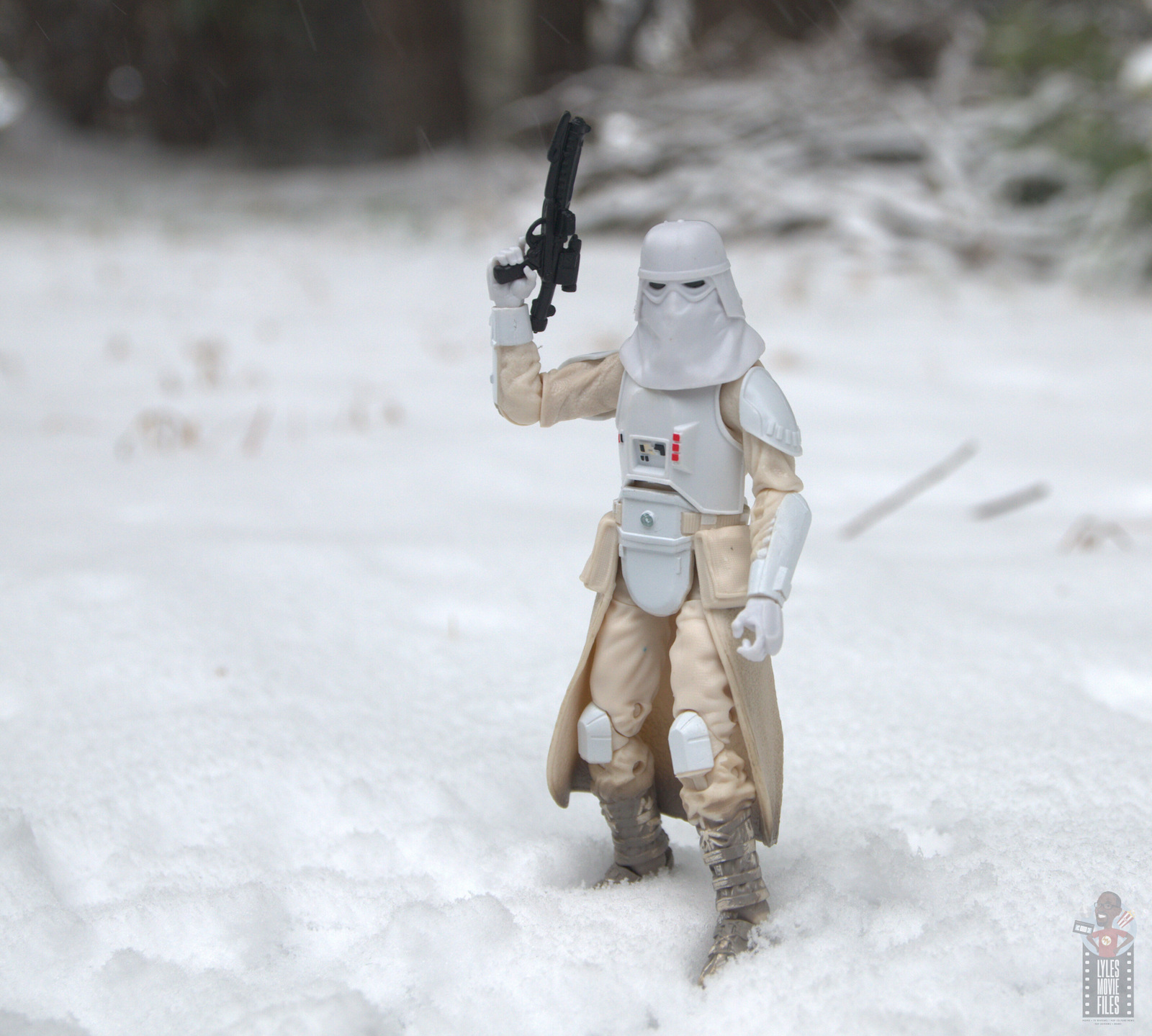 All of the other details like the dials and snowy weathering of the boots. 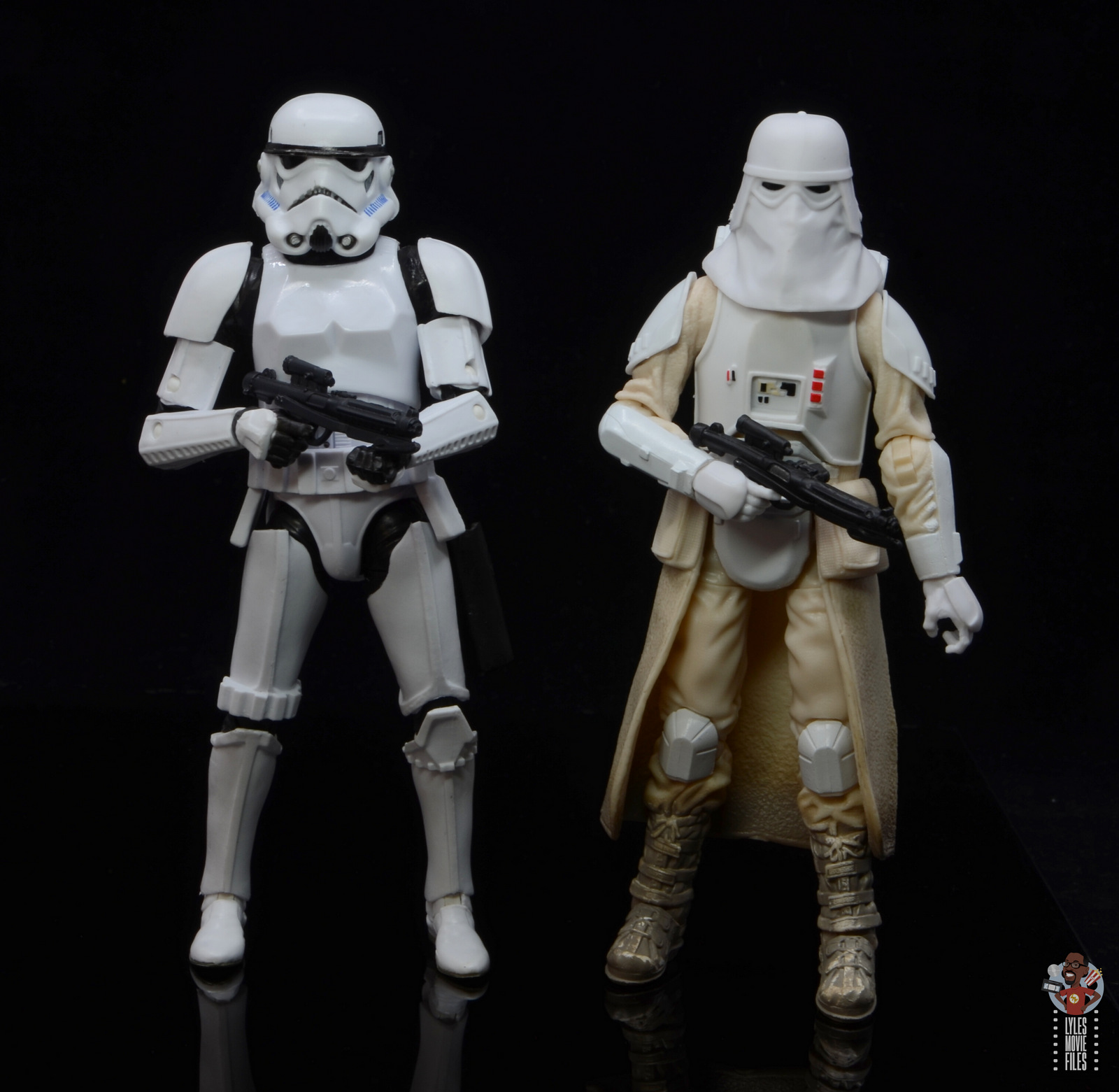 Scale:  Snowtroopers basically were right with each other and Darth Vader so scale isn’t much of an issue with them so long as they’re shorter than him. 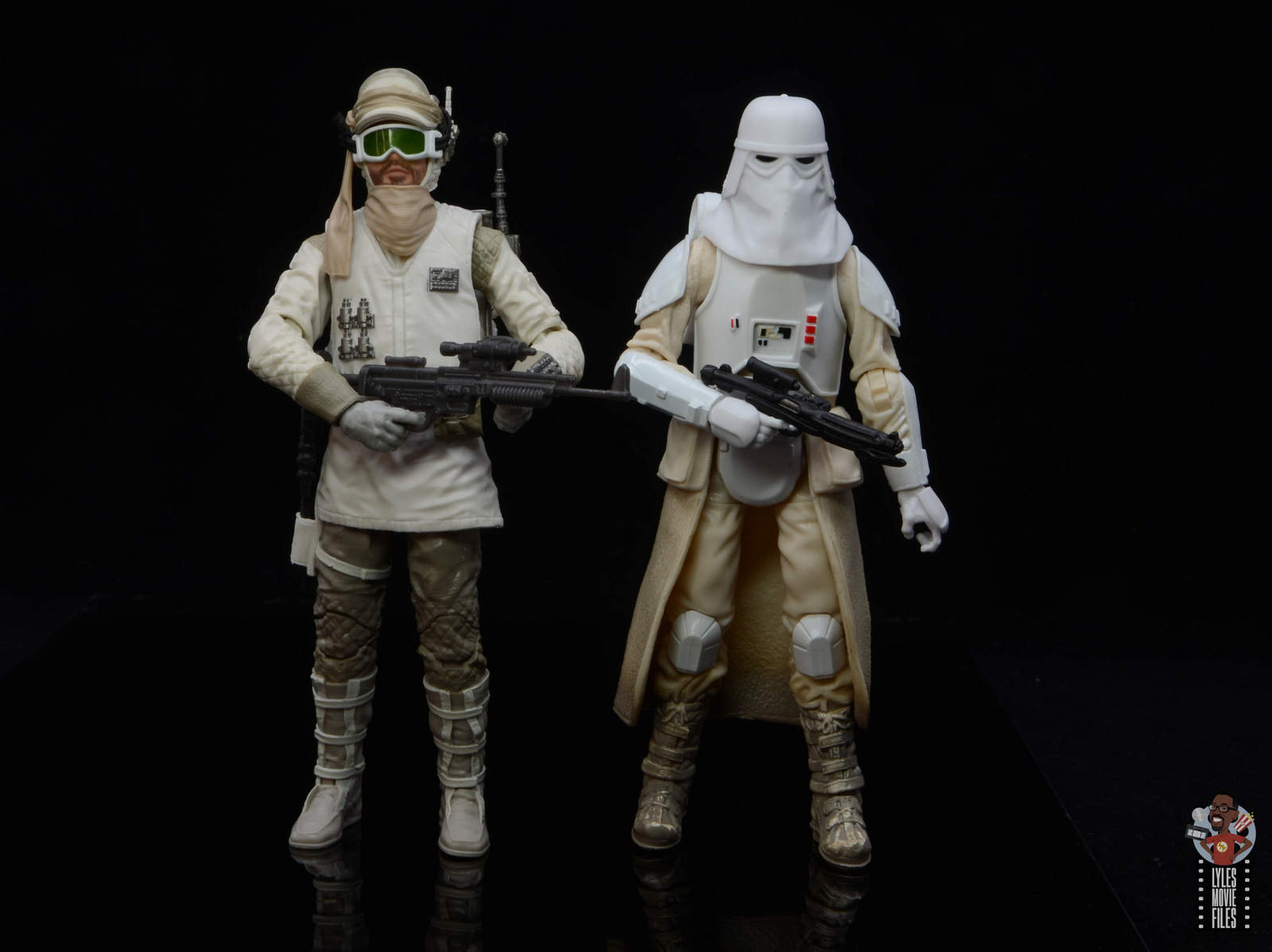 Articulation:  The Snowtroopers traditionally aim in a two hand pose so that’s the only thing I really need from him. Trudging over snow hills and Echo Base is a bonus. The skirt does restrict some of his movement though so you won’t be able to get a kneeling/crouching position out of him. Otherwise he’s got all the articulation you’d expect from the line.

The Imperial Snowtrooper has: 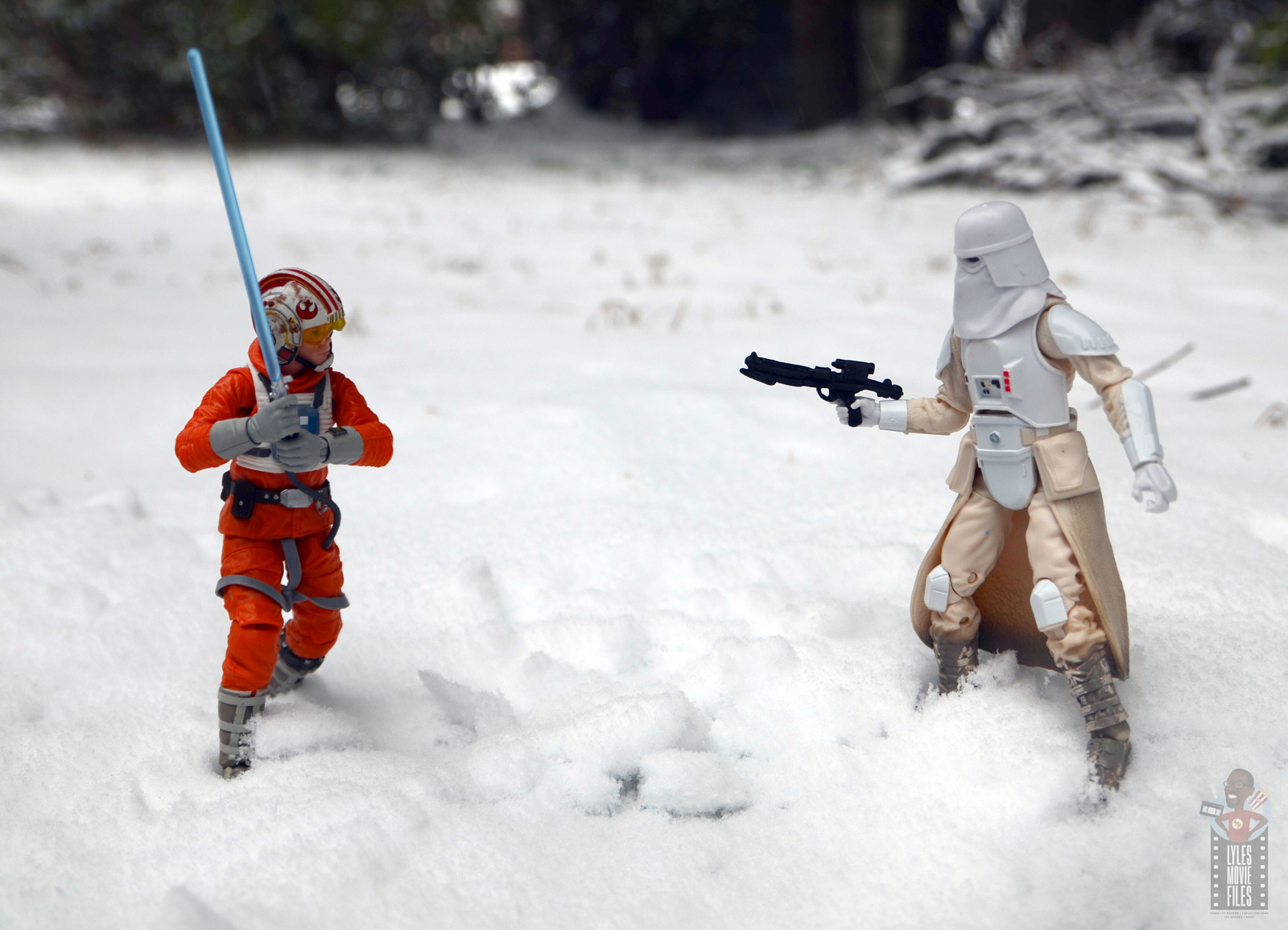 Accessories:  The Snowtrooper comes with two guns. One is the standard Stormtrooper blaster and the other is a longer rifle. I don’t recall the longer rifle ever being used during ESB, but I know it did come with the vintage figure so I can’t knock its inclusion. 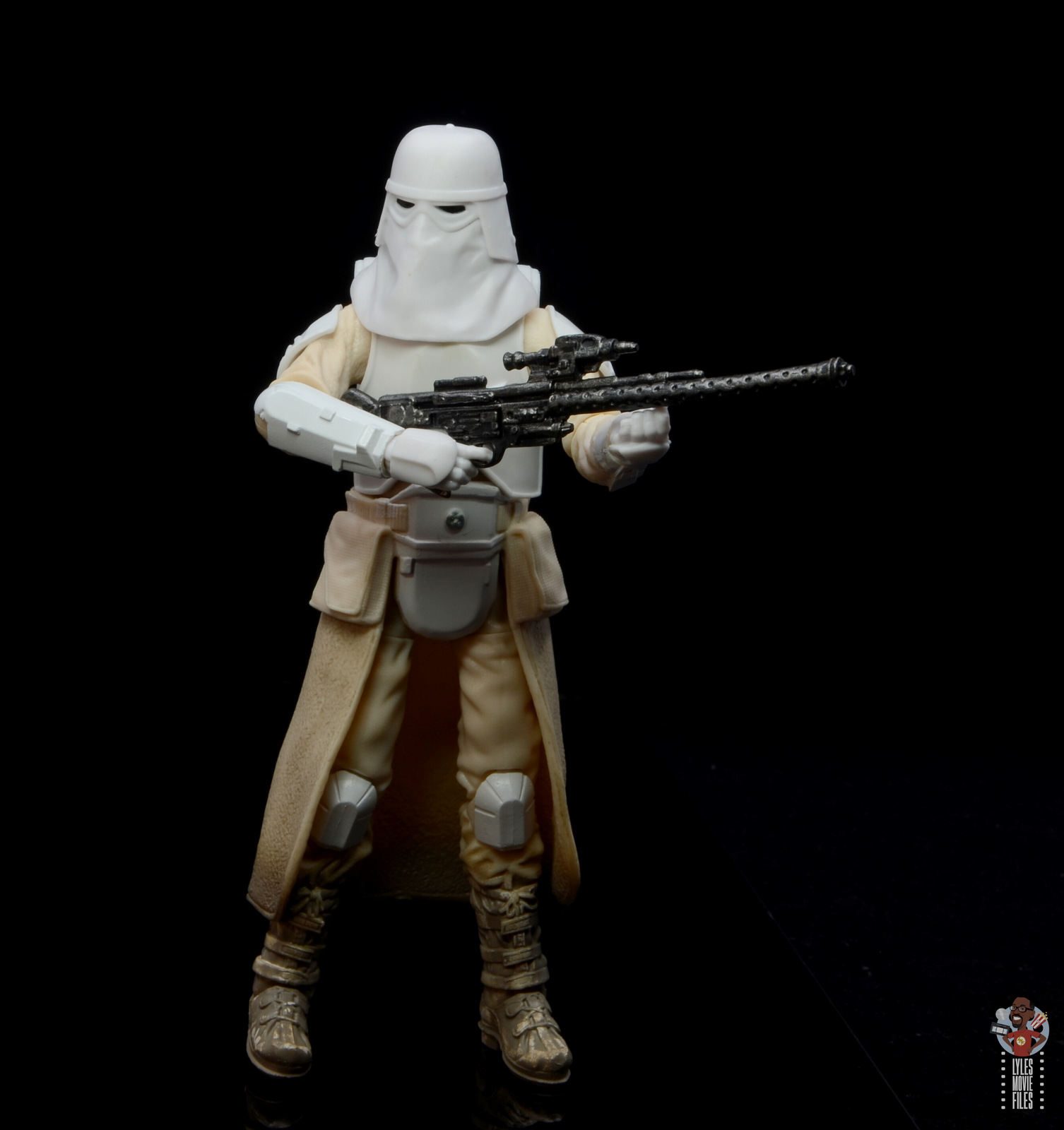 Besides more weapons is always a good thing with this line.

Worth it?  I got the Imperial Snowtrooper for around $20. That’s an essential price for an army builder as paying more makes creating a squad challenging (as he looks at the current rate for Snowtroopers)… 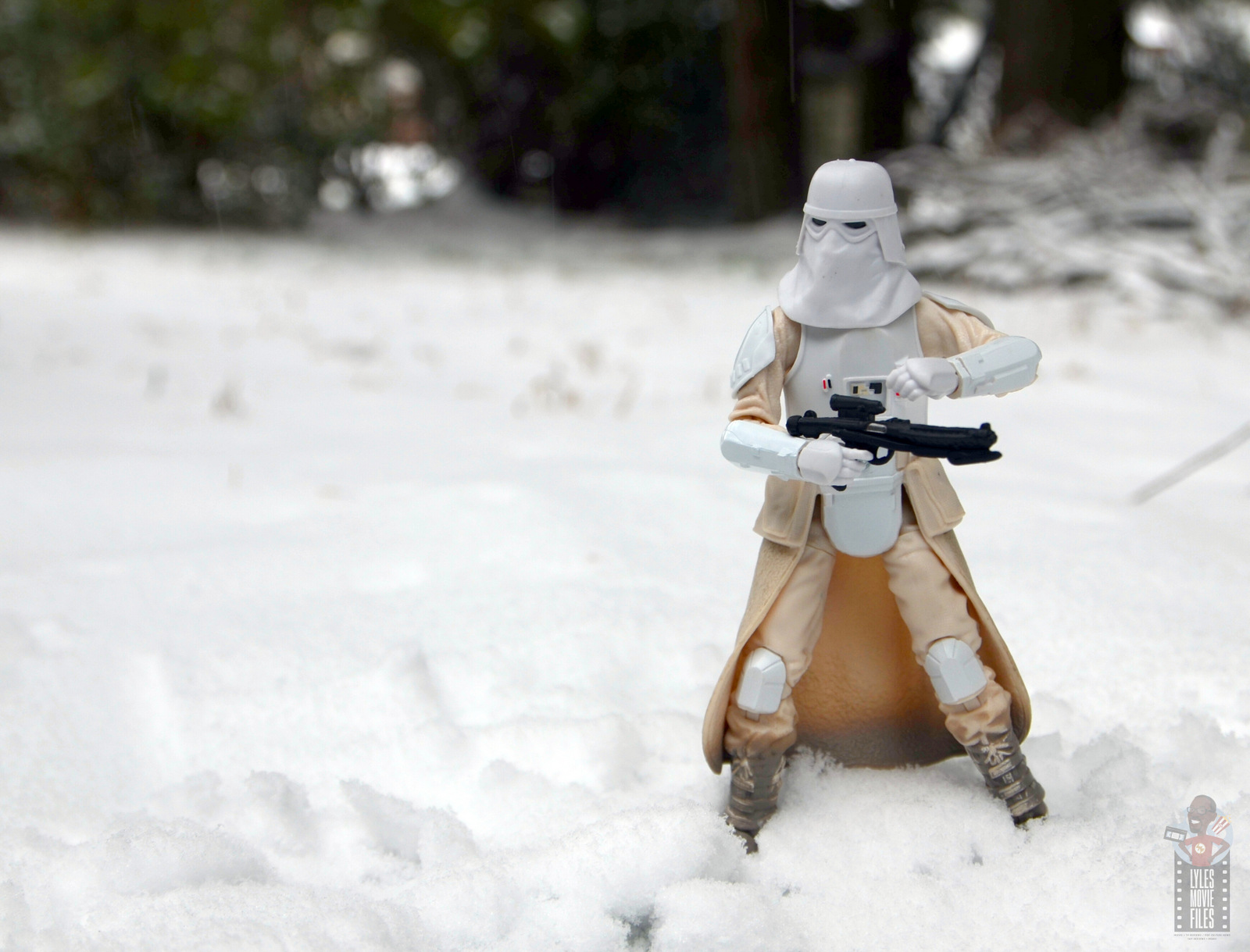 The cream/eggshell white for the bulk of the clothing is an odd visual, but I do wish the skirt was made of a more pliable material to allow for some deeper stances. 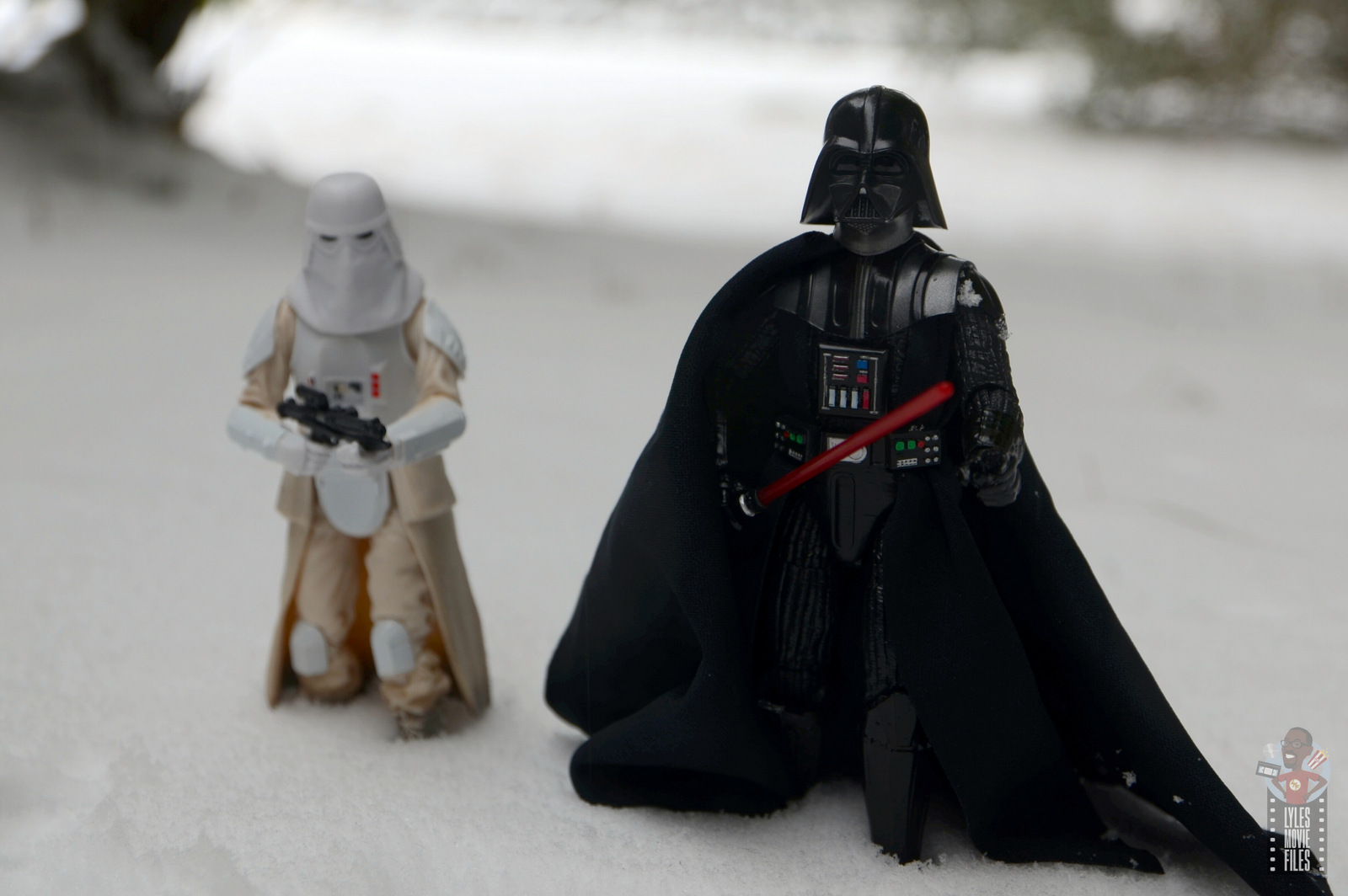 Where to get it?  I’ve found the Snowtrooper at GameStop and seen a few more at Target. Hasbro has done a decent job of trying to keep them in stock and has a new pre-order set at Entertainment Earth.