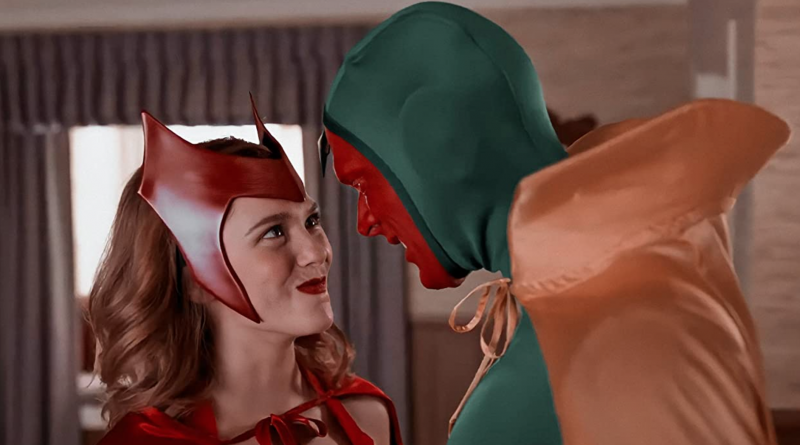 OK, clearly the point of this episode of WandaVision was to throw us hardcore comic book purists a bone by showing some classic comic book visuals in All-New Halloween Spooktacular. The thing is even the sorta cheaper out bargain basement versions of these costumes look good enough that I wish the costume designers skewed a bit harder for the comic book looks of Wanda and Vision.

This episode guides us ever so subtly to the 90s complete with shaky cam, extreme music opening and a Malcolm in the Middle style talking to the camera send up via Billy and Tommy.

It’s Halloween in Westview and Billy is decked out in his future Wiccan comic book outfit. You’ve gotta love how showrunner Jac Schaeffer and director Matt Shakman are finding ways to pay homage to the source material whether from the 1970s or the 2000s.

Besides the cape, Wanda’s Scarlet Witch costume looks pretty good. That classic red and pink color combination always pops in the comic and it has the same effect on the small screen.

I dug the Sokovian fortune teller explanation for the comic. For a while in Kurt Busiek and George Perez’s amazing Avengers run, Wanda used her hex powers and incorporated more of her gypsy roots into her costume.

Vision’s outfit is done a tad more tongue in cheek with shorts for his trunks and drawstring cape although in some distant silhouette shots it really does look like the comic book version come to life. 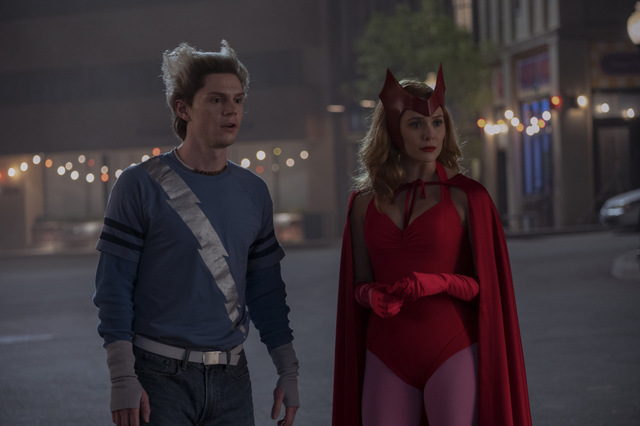 Pietro gets in on the fun too complete with the wingtip hairstyle. I’m supposed to think this is cheesy and understand why these looks weren’t incorporated into the films, but that’s the one thing WandaVision has failed at as I believe more than ever that these outfits could have been tweaked to work in a more realistic manner to work in the MCU.

Vizh is starting to rebel against Wanda although he’s playing within her rules enough that she’s not overly suspicious. He says he’s going on undercover neighborhood watch duty, but in reality he’s continuing his investigation as to what’s going on in Westview.

That’s a sentiment shared by Dir. Heyward. He’s run out of time and patience for Monica’s empathy for Wanda noting that all the people who got blipped out still have the luxury of optimism. We’d probably need a main-ish character to follow, but exploring those five years sounds like the basis for a very intriguing TV series.

Pietro begins the first of many heart to heart conversations with Wanda and runs off with the boys yelling “kick-ass,” which Wanda repeats in a clever nod to Evan Peters’ first superhero movie appearance.

Monica, Darcy and Jimmy get kicked off the base, but escape SWORD custody and plug into Heyward’s network to see he’s using Vision’s vibranium to track him. Smart. Remember when Monica blew off that curious report of her bloodwork? Darcy learns her two stops into Westview is changing her blood cells on a molecular level…like possibly a superhero level? Tell me more Darcy. And just like that WandaVision has set up a legit way for Monica to get her powers.

Pietro asks Wanda how she’s doing all of this and she has no clue. All she felt was an endless nothingness and now she’s got everything she wanted — right up until she gets another…vision of Pietro shot up like he was after Ultron’s attack. Wanda is still processing her grief and it would be very interesting to see if she sees glimpses of Black Widow, Cap and Iron Man as well. Those would be some crazy surprise cameos.

This week’s commercial is for Yo-Magic done in a stop-motion style like Celebrity Death Match. I won’t even pretend to understand the messaging on this one. I’m gonna need a lifeline, Bob.

Vision finds a woman stuck in place with a tear streaming down her face. He’s the perfect character to experience Westview as his logical nature won’t let him just randomly untap the Westview residents from Wanda’s matrix without an end game. When he spots Agnes, he is curious about her plight and she questions if she’s dead since last she heard Vision died.

That’s another ripe for exploration storyline for the MCU at some point — the worldwide trauma after the Blip and learning that half the Avengers (Captain America, Iron Man, Black Widow and Vision) are dead while Hulk and Hawkeye are basically retired. Would the world have even known that Thor returned after Age of Ultron?

Vision finds the outskirts of Westview and attempts to leave, but Wanda’s default hold is too strong and he starts tearing apart. For whatever reason, Wanda is unaware of Vision’s actions and it takes Billy to unconsciously tap into his powers to recognize Vision is hurting. Both twins started manifesting their powers and another episode or two should have them right at their Young Avengers age. Will they get written off the show at that point? 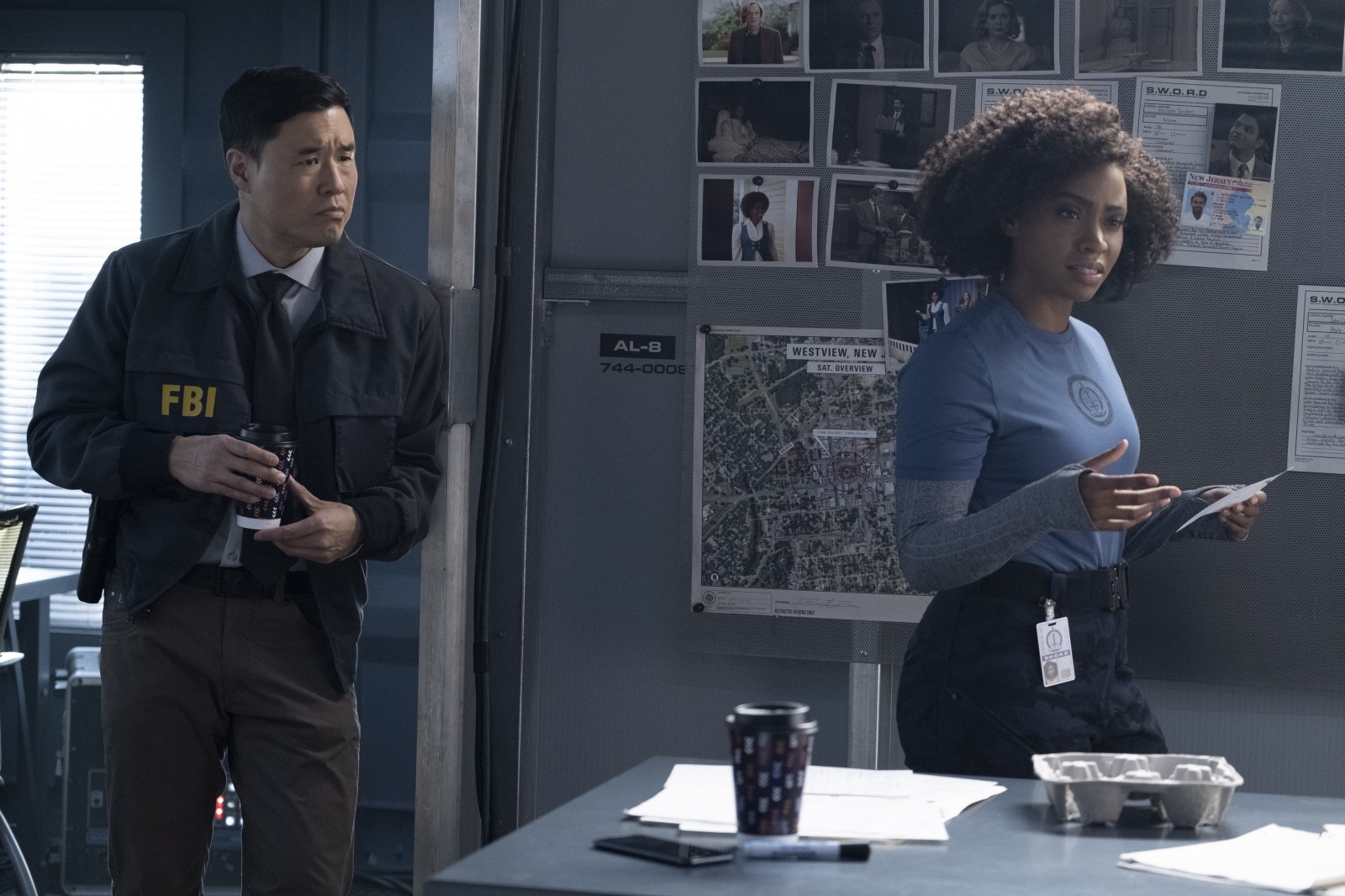 While the easy thing to do would be to simply teleport over to Vision and bring him back, Wanda goes hard and just expands Westview seemingly shifting to earlier time periods as the town absorbs SWORD agents and Darcy. With things back to normal, Wanda can relax a little. It’s been an eventful Halloween.

I’m loving the deep dive into Wanda’s trauma and how Vision can’t break free while she struggles to gain closure. WandaVision is steadily moving on the path that Vision probably won’t survive the end of the series, which ultimately would probably be the best for Wanda. This is such a fascinating show and All-New Halloween Spooktacular proved a pivotal step in the journey.