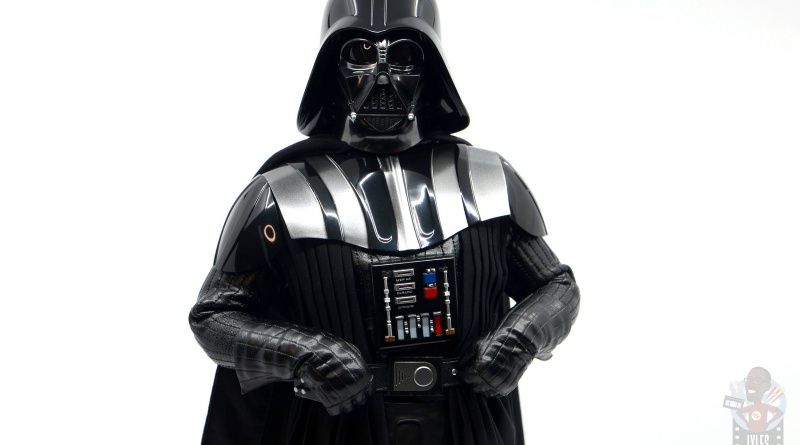 I’m on a Hot Toys Empire Strikes Back kick and there’s no sense in going much further without knocking out my all-time favorite villain — Darth Vader. Granted, Palpatine makes a strong case for that distinction, but he doesn’t look as cool. My Hot Toys Bespin Luke is one of my grab in the case of fire figures. Let’s see if Vader joins his son in that dire case of emergency scenario.

Packaging:  Hot Toys hasn’t deviated from its simple outer package for the Original Trilogy with the elegant flat and glossy shades of black. It’s not as intricate as some of their other lines, but it’s effective.

His interior package art features arguably the most iconic moment of the series when Vader reveals the true nature of his relationship to Luke Sywalker. It’s a great choice as Vader isn’t a character that needed a collage to sell him. It’s not like you’d have a complete Star Wars display without him.

Removing the insert and the amount of accessories immediately on hand is impressive. Layer one is the assorted hands and the light-up right arm.

Next up is the figure itself followed by the diorama base. That’s a lot to unpack and isn’t one of those deals where I was questioning the price tag. 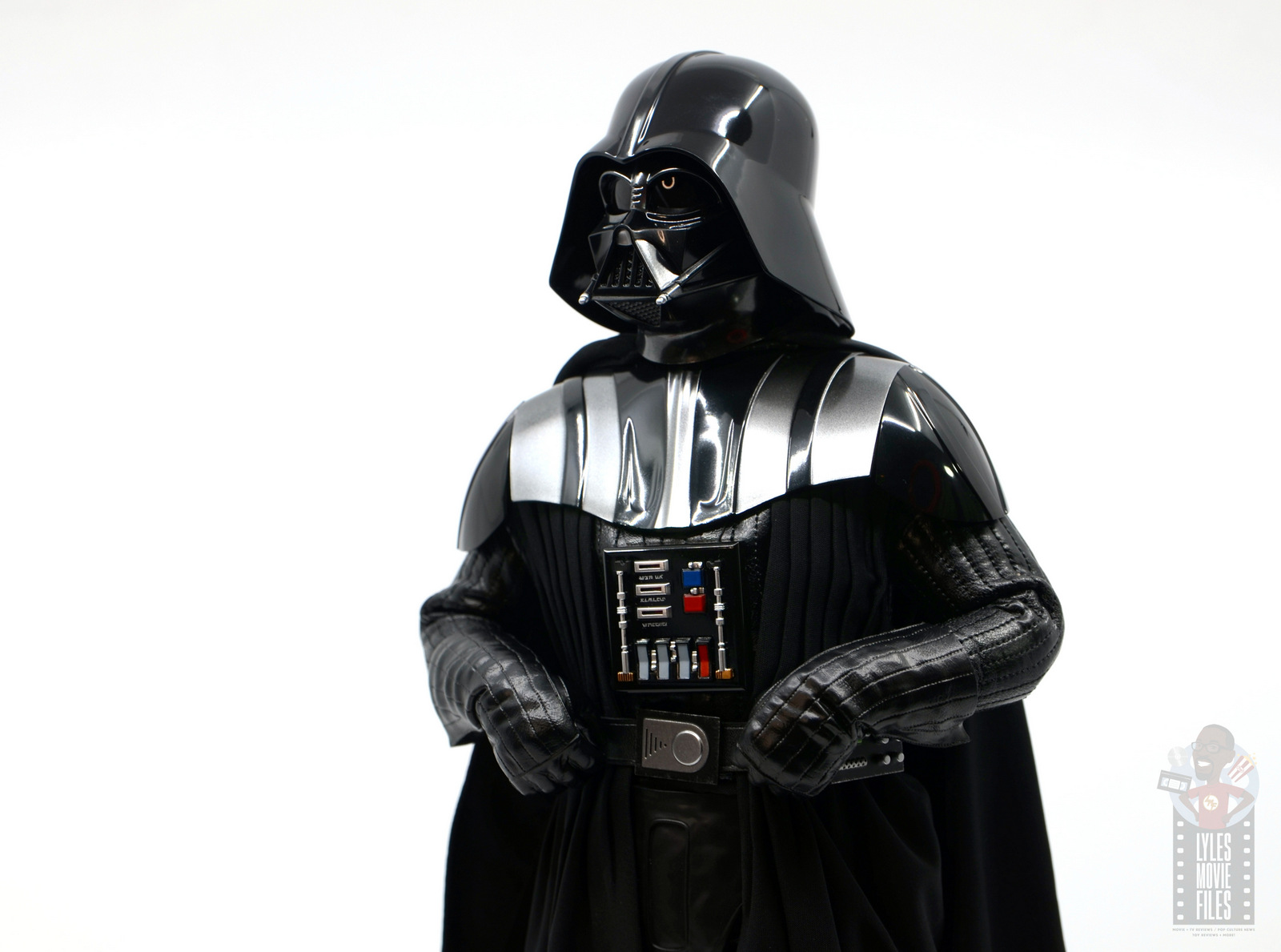 Likeness:  Years ago, I grabbed the 12” Hasbro Darth Vader. It featured a sound clip of James Earl Jones citing some of Vader’s memorable lines. That was good enough to warrant keeping it over upgrading to the Sideshow Collectibles version. I’m glad I waited.

The helmet is always the tricky part of Vader. Make it too big and it becomes a parody. This one is just right and scaled like a regular human head would fit. The angles are spot on so his forehead doesn’t look crazy. The sculpt also nailed the grill precisely as well.

Hot Toys didn’t skimp on any of the details. I got fascinated with all the work done on the chest panel. I legit never knew there was text on the panel. 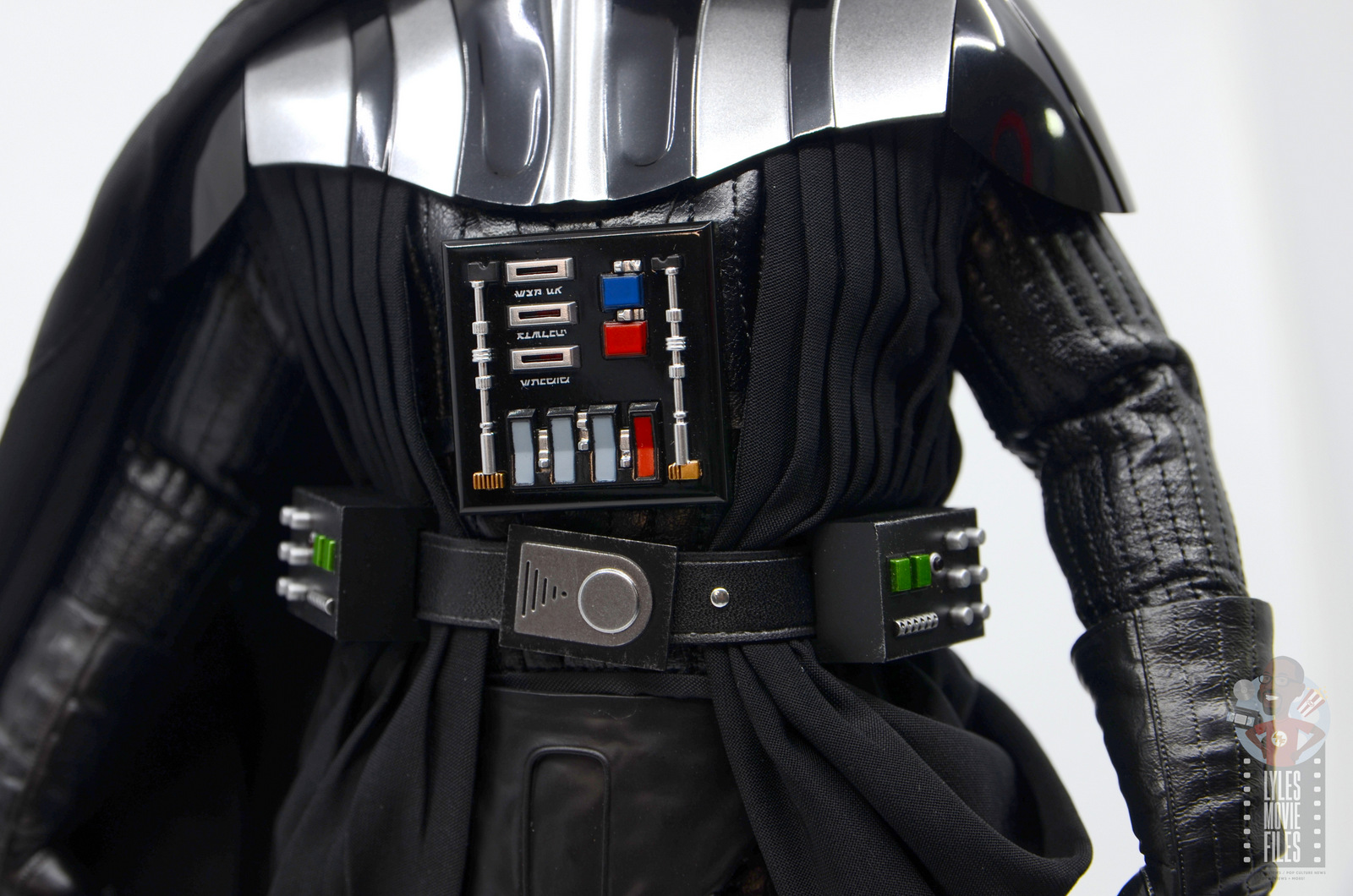 I like the overall flow of the outfit with the chest and shoulder pads. The Empire attire with the pads over the inner robes is a better visual. Vader’s belt lines up nicely as well.

Scale:  There’s other figures to pair him against obviously although it’s impressive putting him next to Luke. The size discrepancy is exactly how I envisioned it from that hallway scene in the second act of their duel. 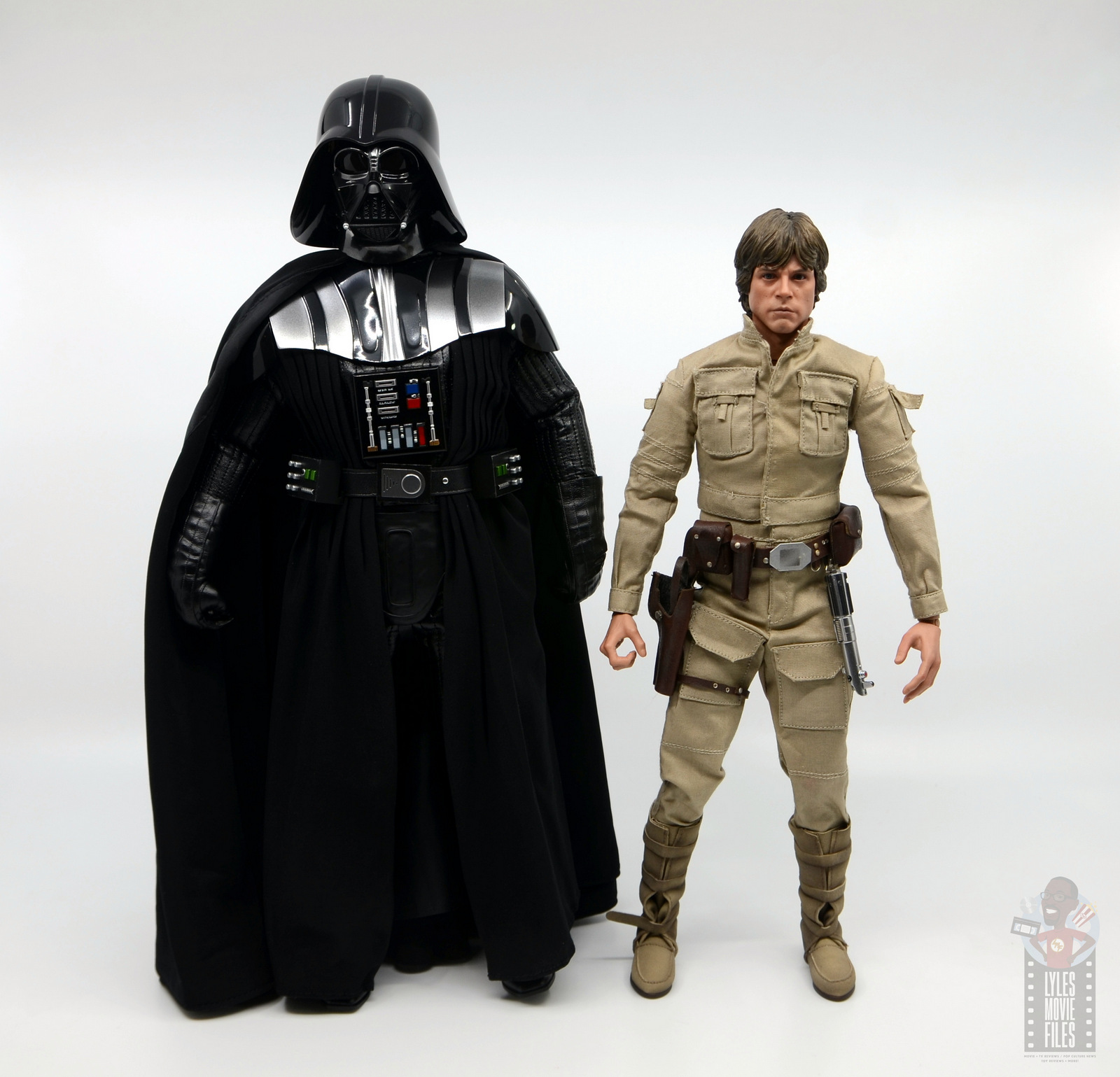 Vader is a about a half taller than Boba Fett, who is next on my Hot Toys ESB review list, so I’m curious to see how the figures match up. 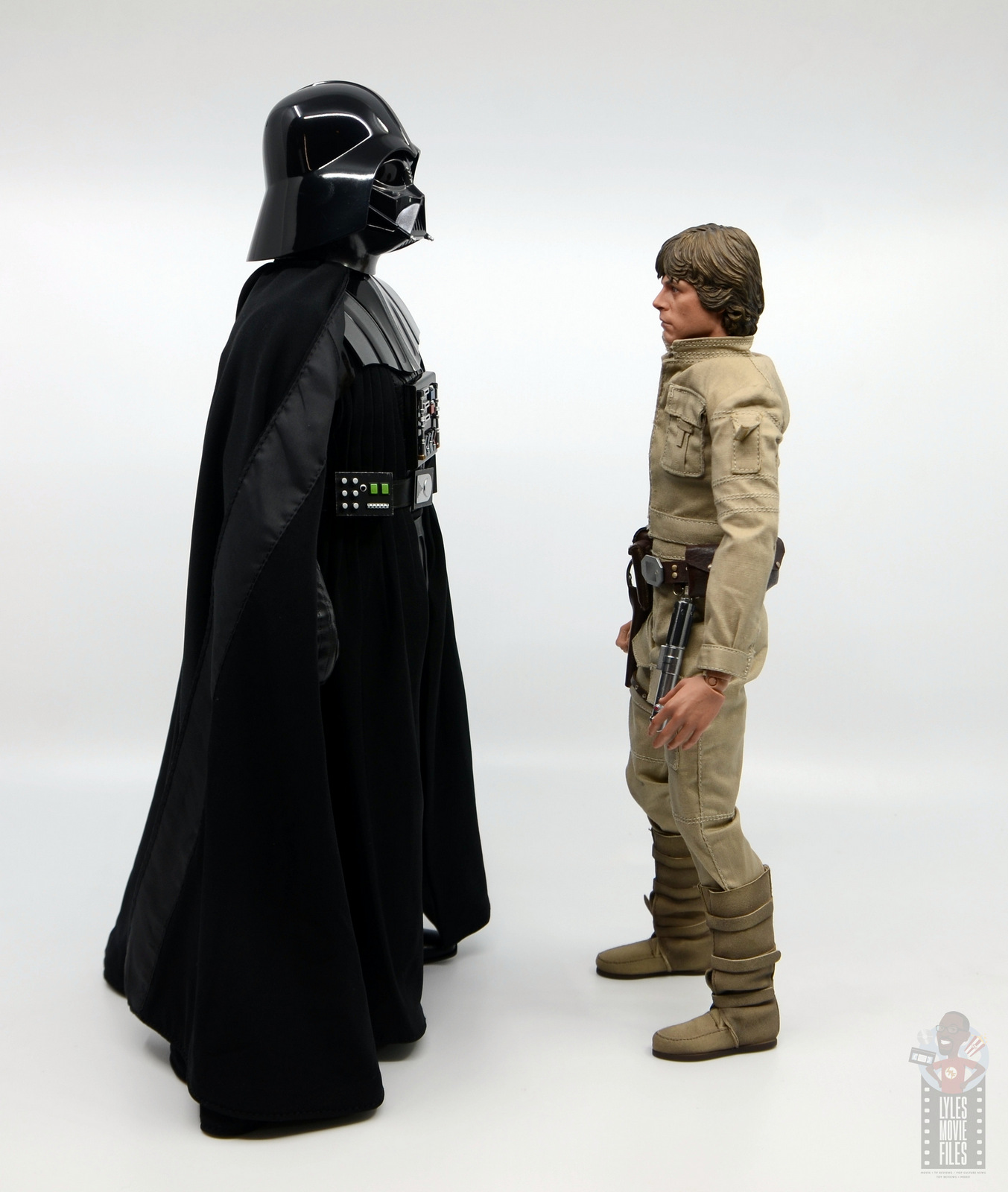 Paint:  As expected the paintwork here is stellar. The dark red in his eye sockets is the right shade without being overbearing. All of the smaller details like the chest and belt panels are done with the typical Hot Toys precision. 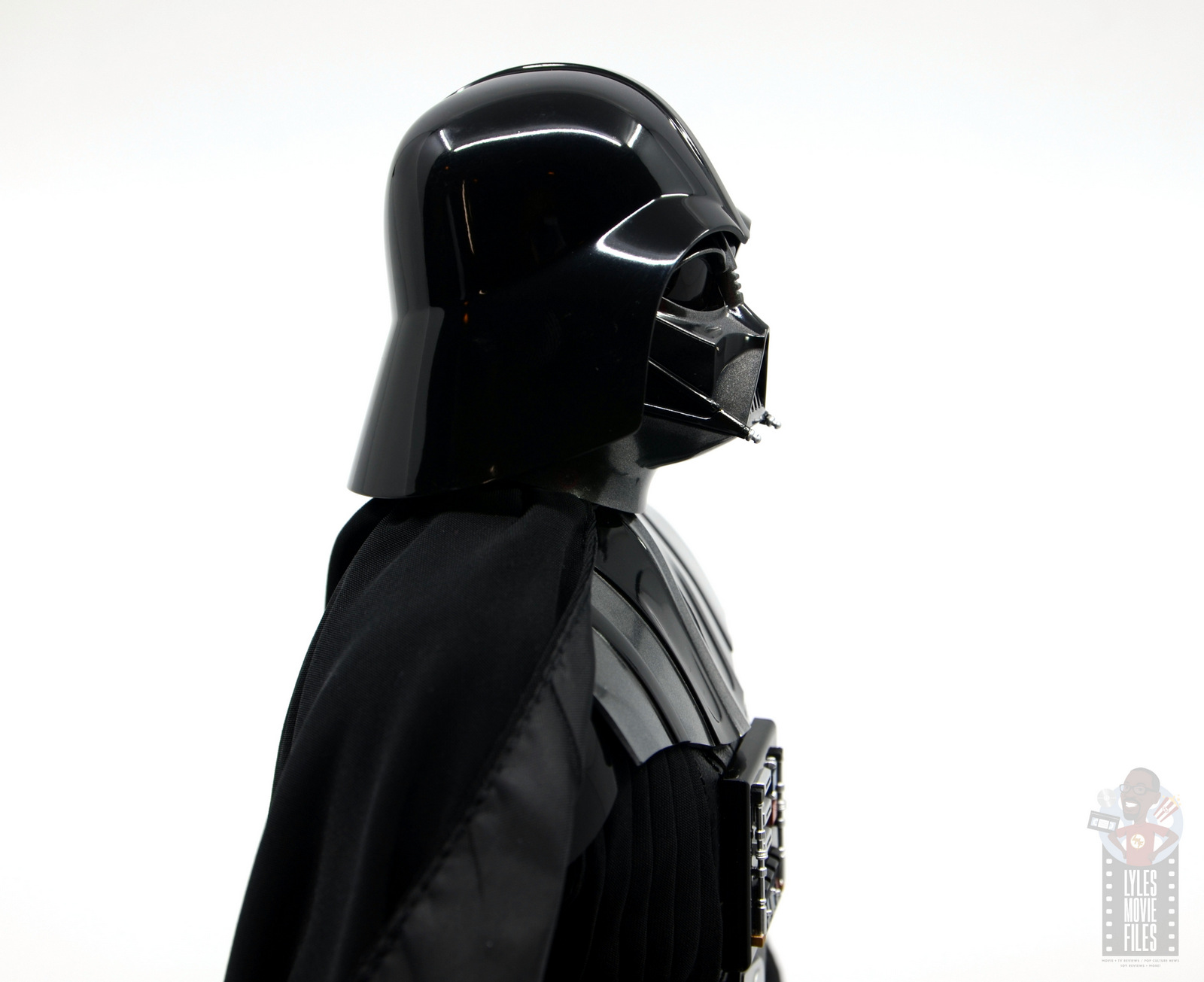 Outfit:  Vader’s outfit turned out incredible. The layers to the attire help illustrate the thought placed into the costume.

The thicker, main garb seems well suited for burn relief. The pads are softer and the roves aren’t constantly in the way. The tailoring on the soft goods is of a very high quality and the material isn’t so thin that it’s see through. 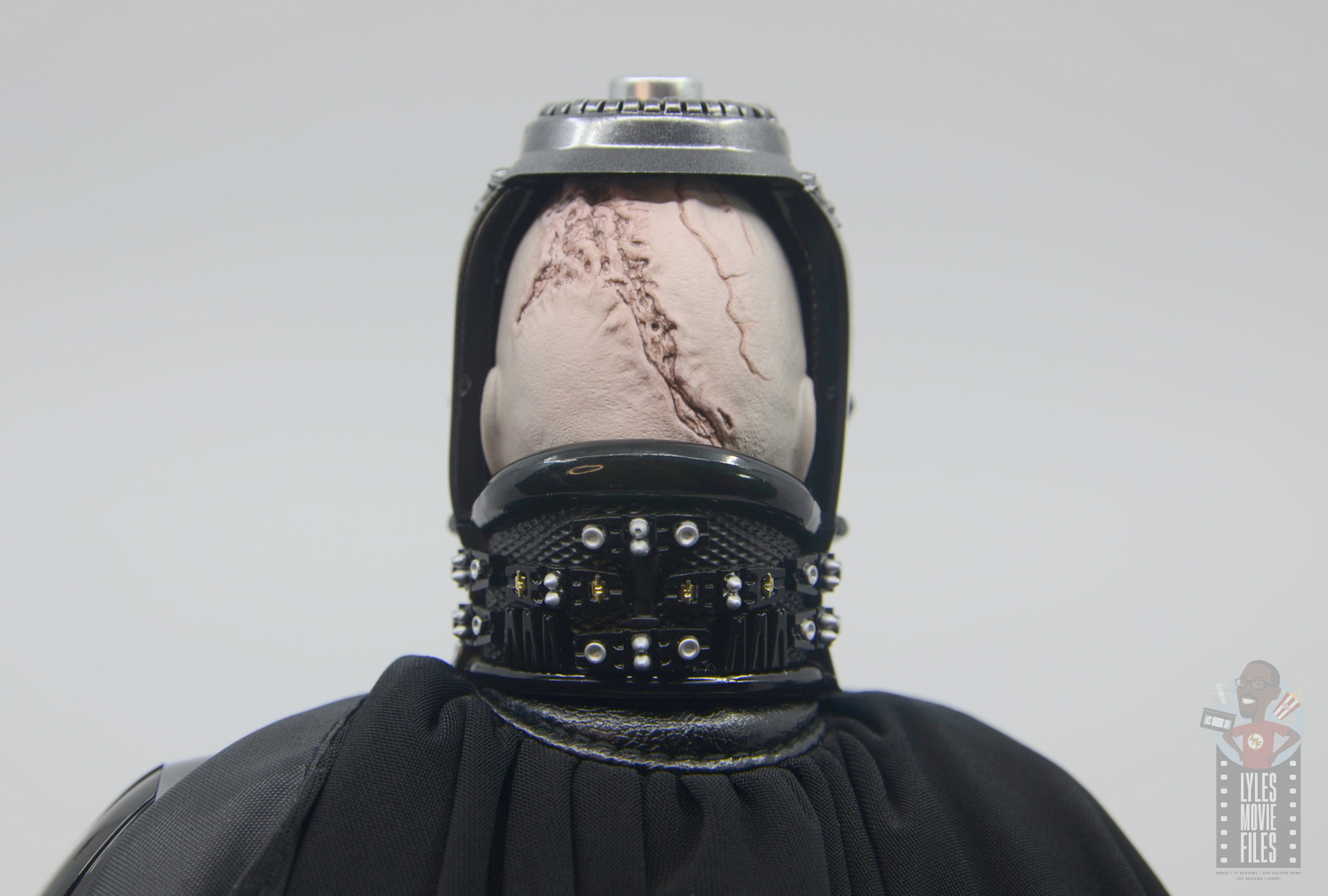 Vader’s helmet crown comes off so you can get that lowering the top piece before strangling Imperial officers scene reenactments. At least somewhat. The front piece doesn’t come off so we don’t get the fully accurate visual. The detail on Vader’s mangled head is impressive like you might expect. 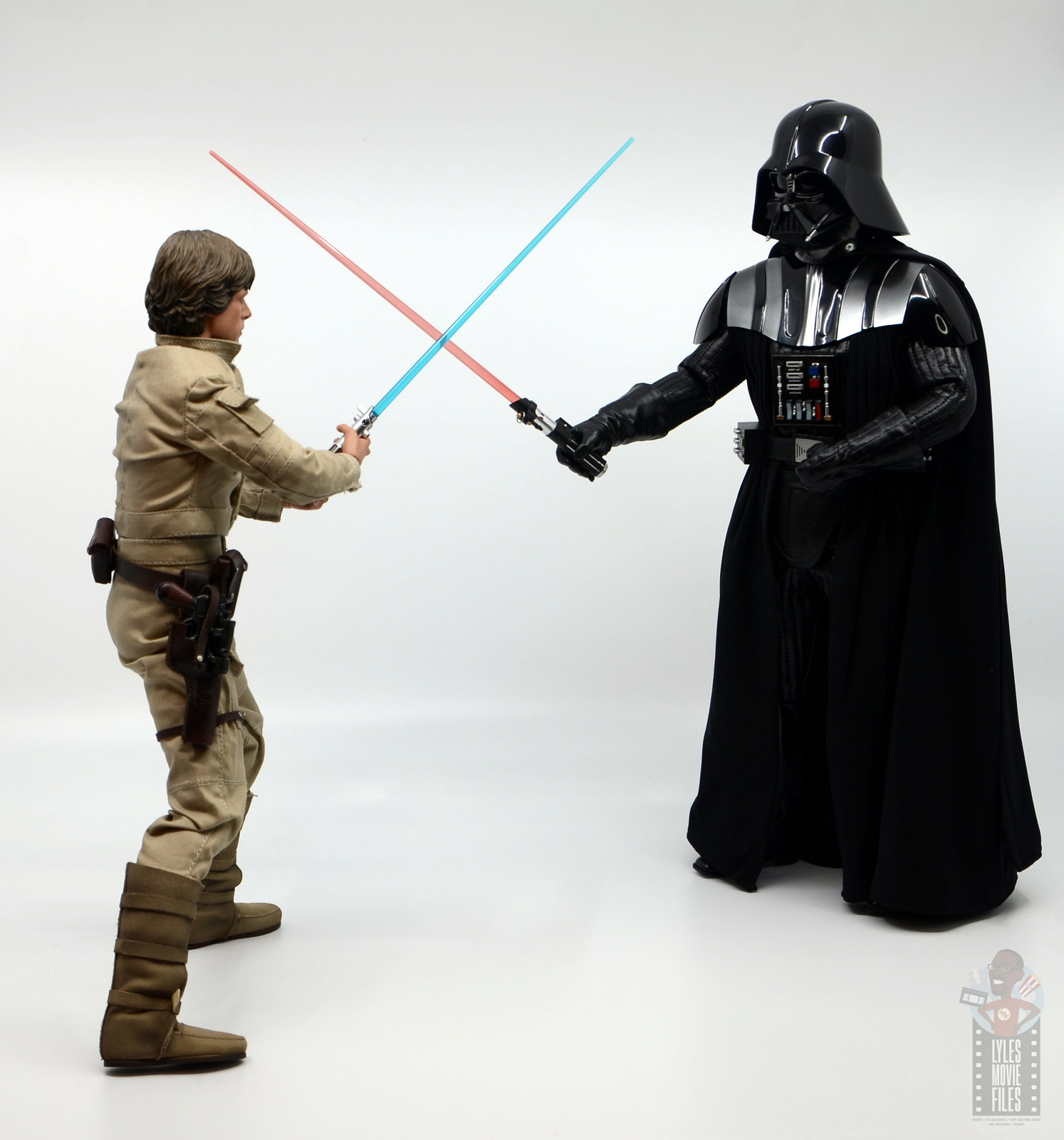 Articulation: Vader needs enough range of movement to choke out Imperial officers and have his standard duel stance. Vader’s out is thick and bulky. 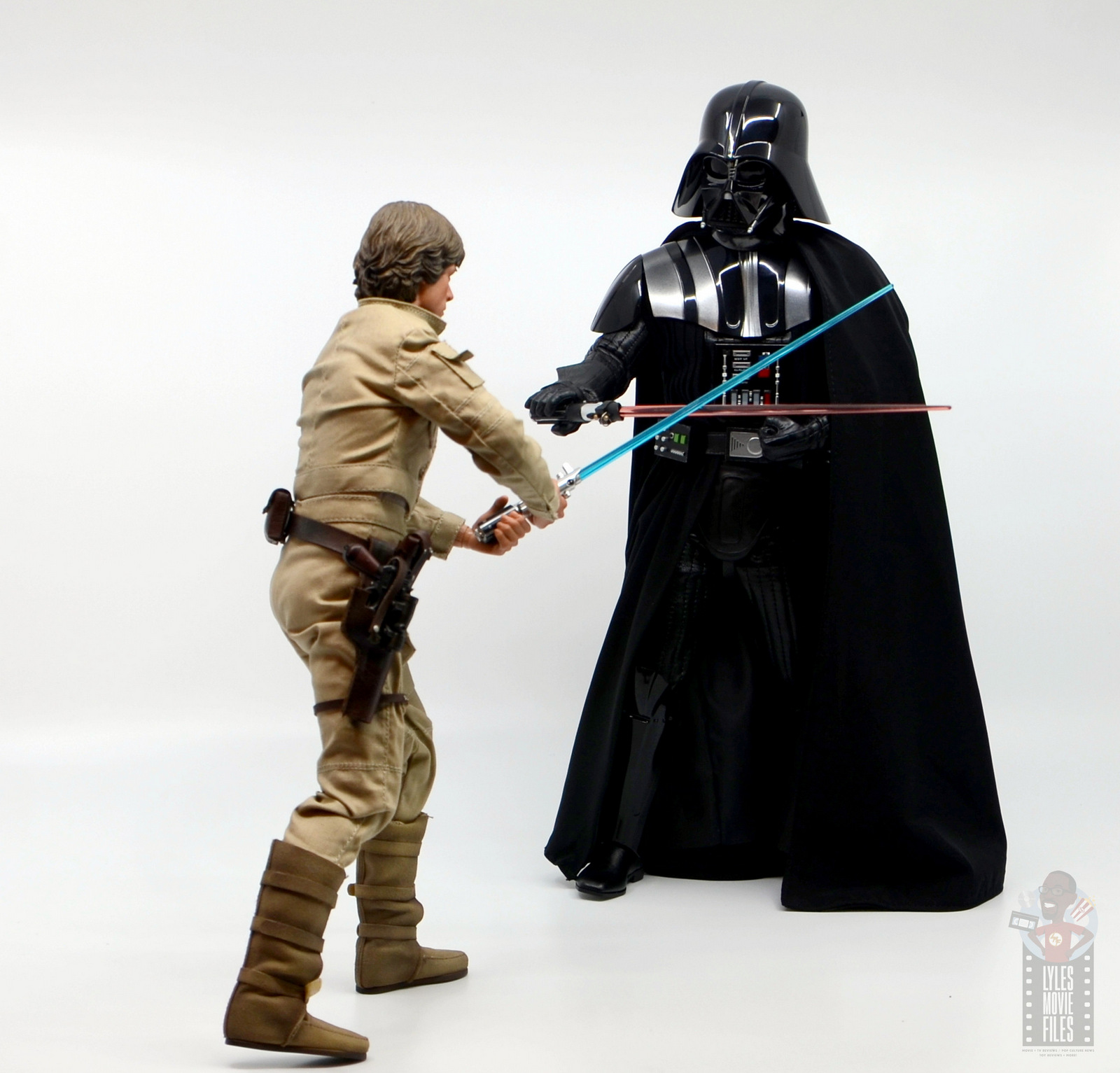 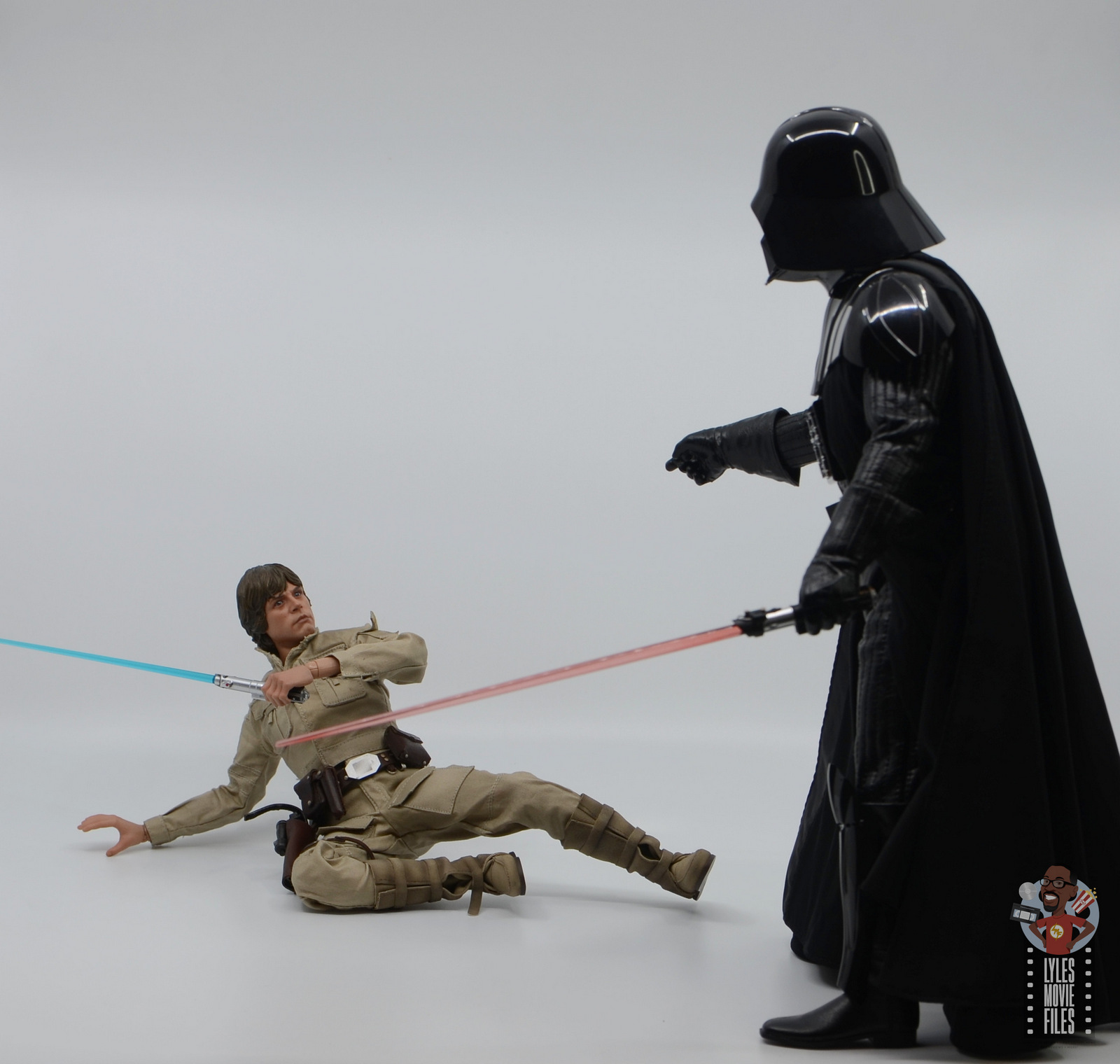 You can get some slight movement, but you’re not gonna get really dynamic poses out of him. That’s fine though since Vader was more of a tank in combat anyway. 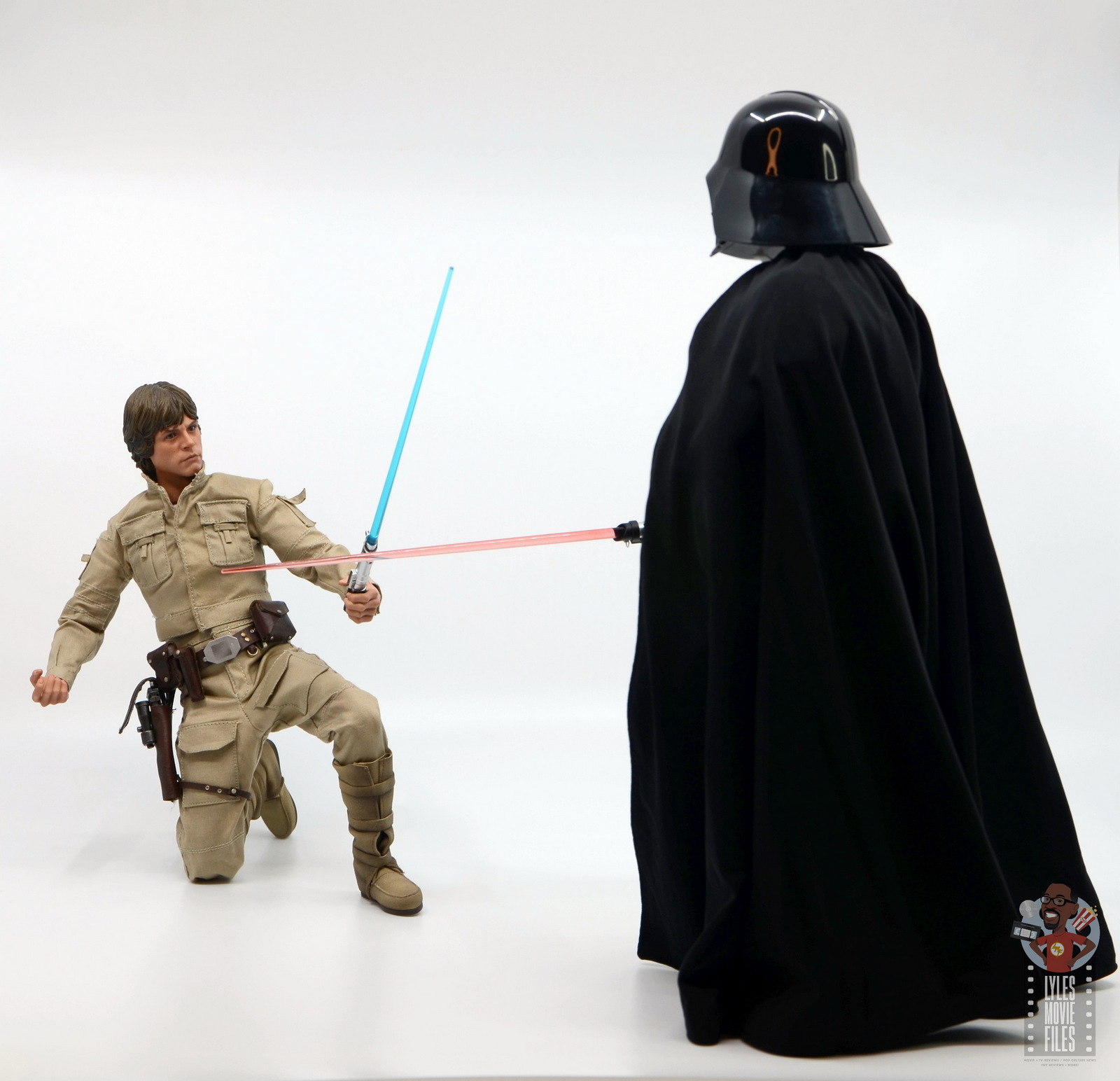 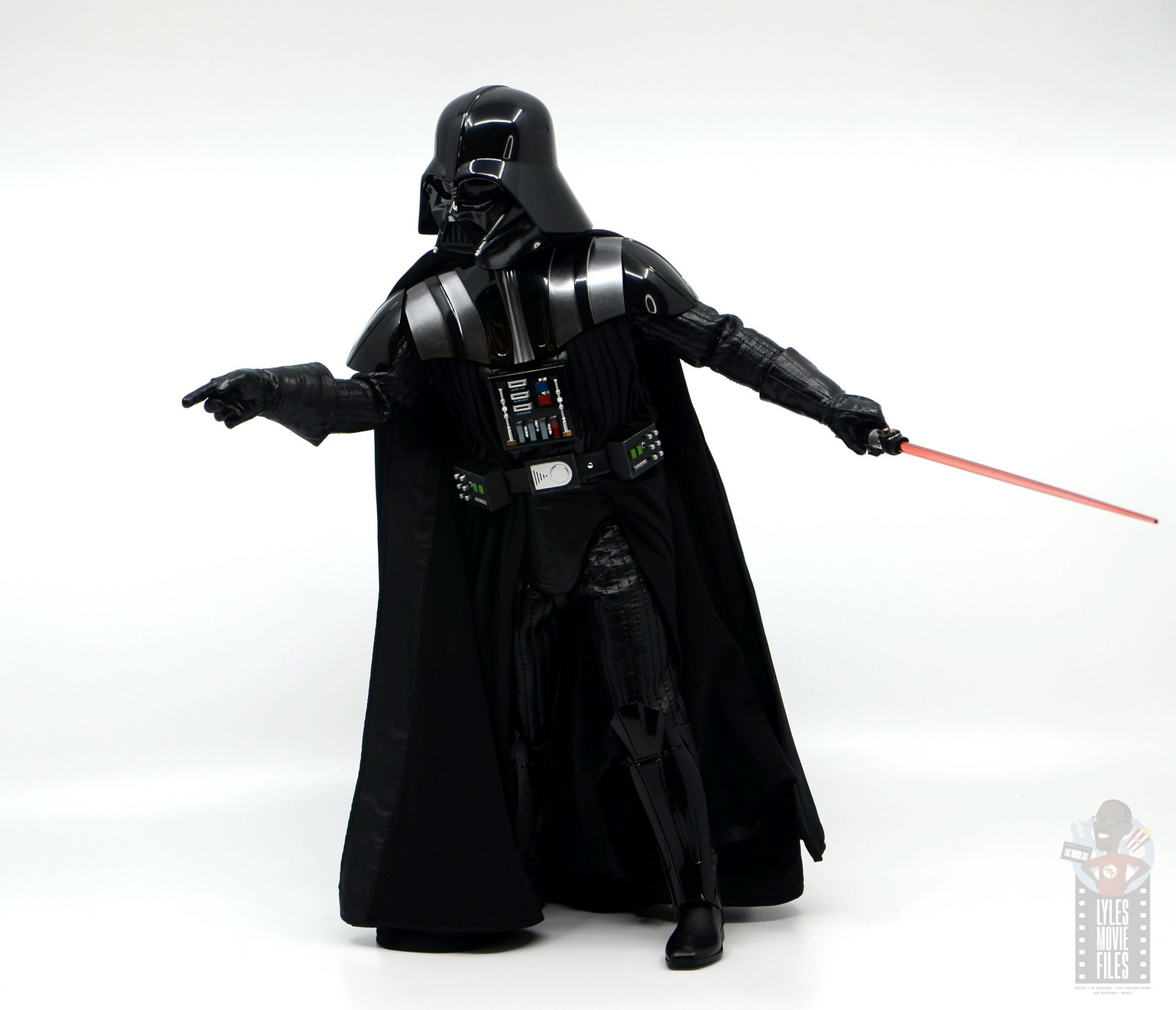 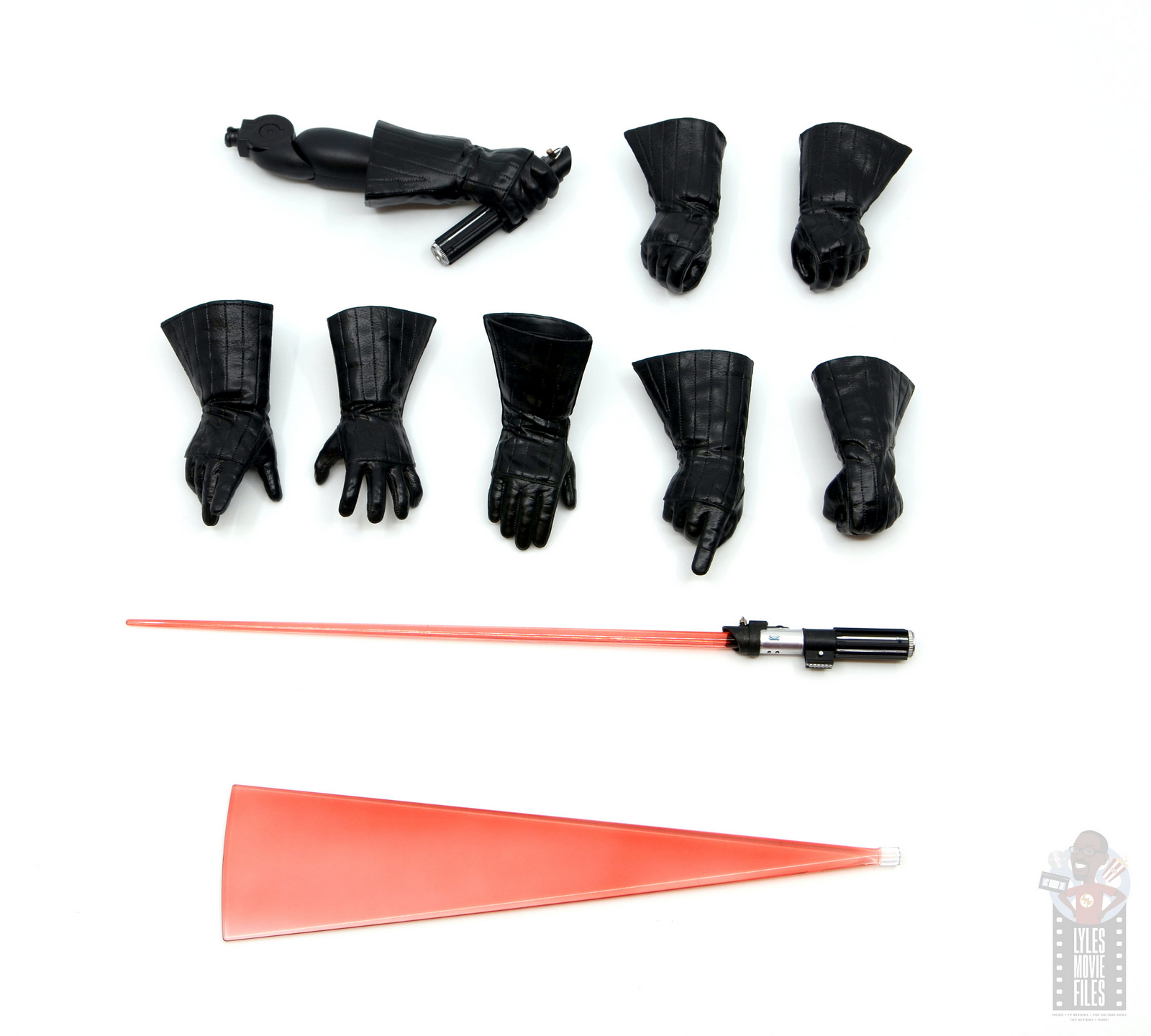 My favorite new inclusion is the motion saber blade. It captures that swirling light trail from the saber and is a fun addition. 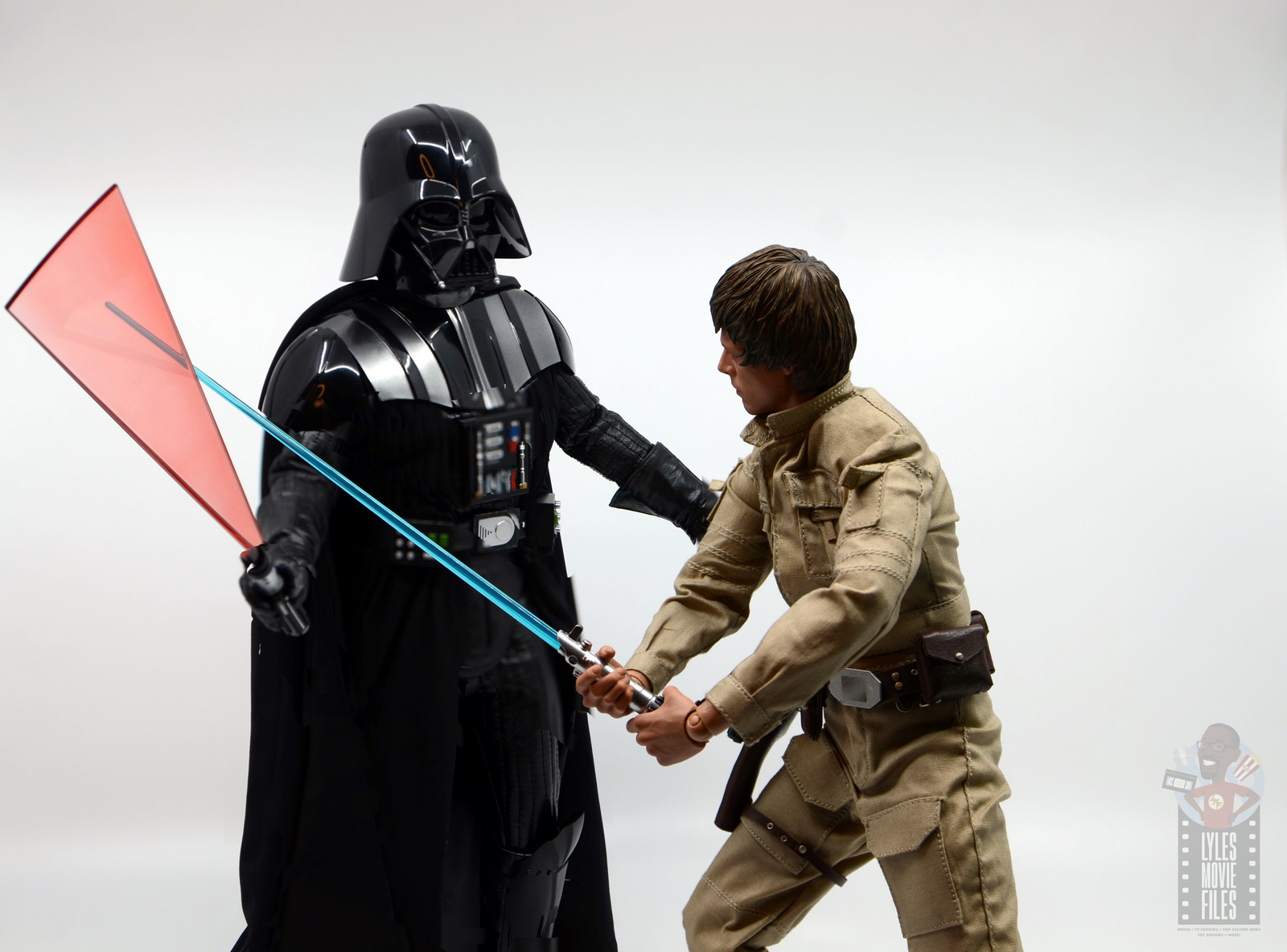 Vader’s standard lightsaber is terrific. At the Hot Toys scale it’s easier to make out all of the details of the saber hilt including the ignition switch and the ridges in the inner slot and base. That’s just not possible with the Black Series figures. 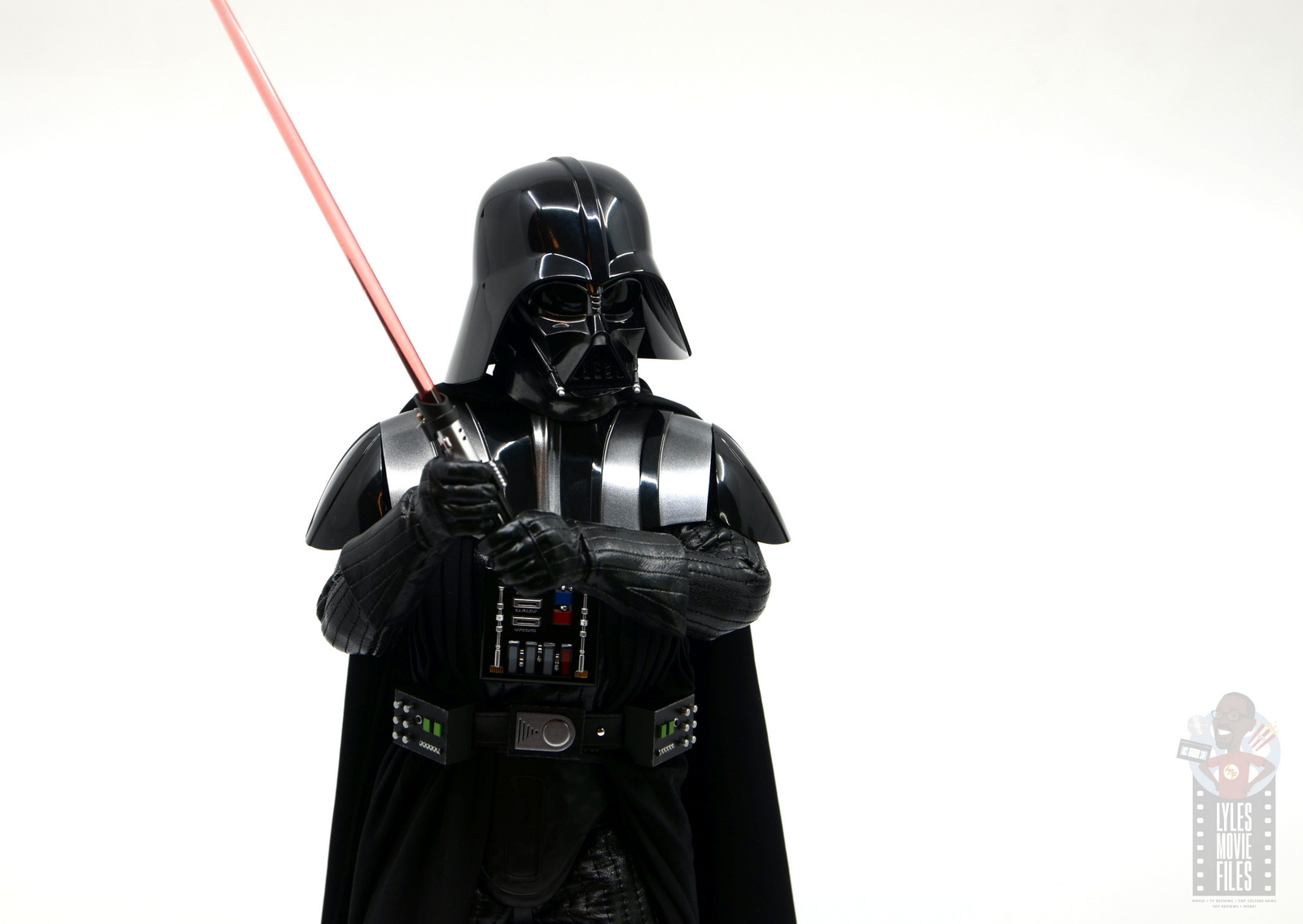 The big accessory is the platform Vader stands over as he makes his plea for Luke to join him in overthrowing The Emperor. It’s just slightly undersized — the shorn tubing should be closer to Vader’s shoulders, but the details are on point. 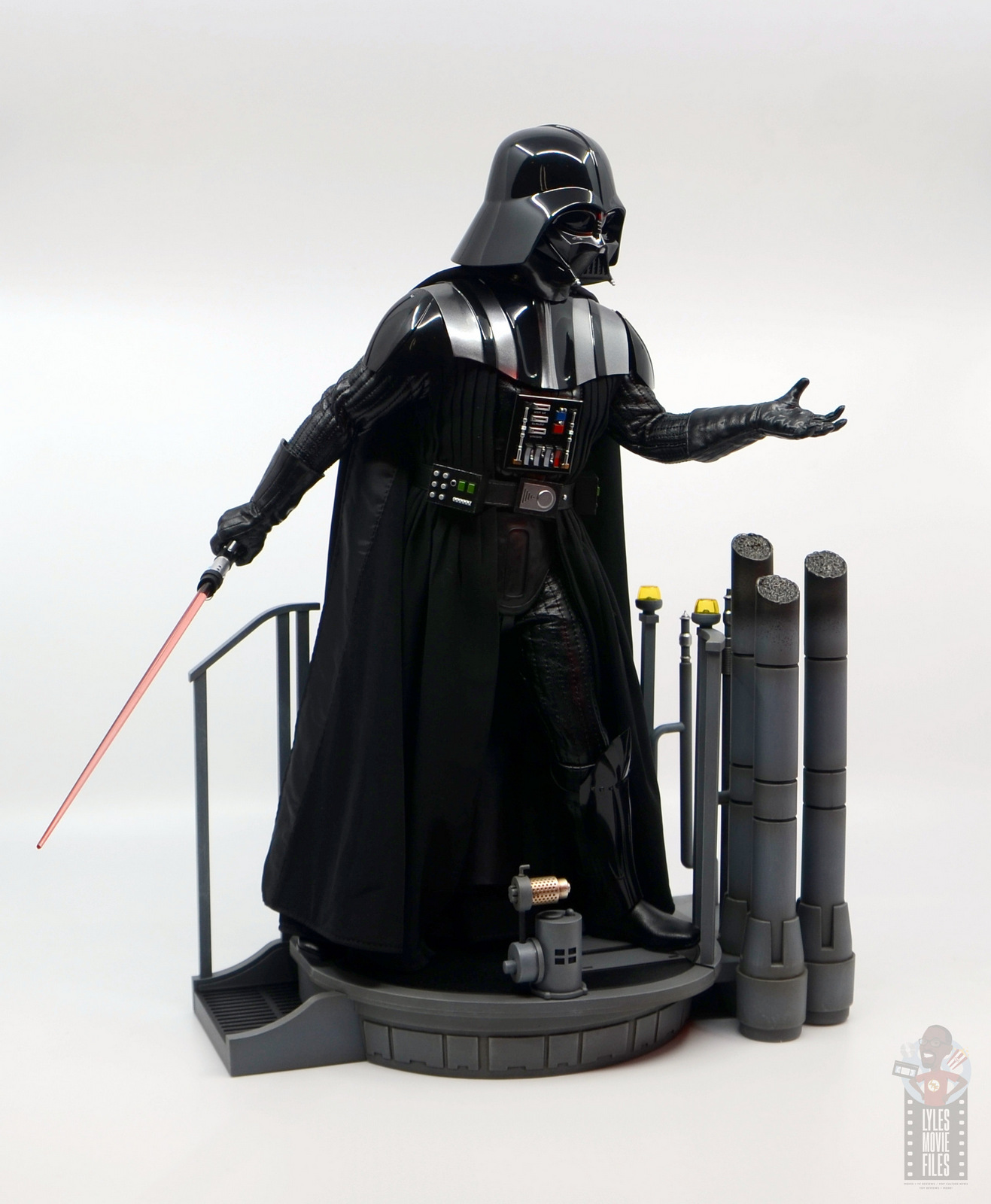 Check out the scorched tips from Vader’s lightsaber on the tubes. These take three Triple A batteries. At the price point it’s a little lame Hot Toys didn’t include those too. 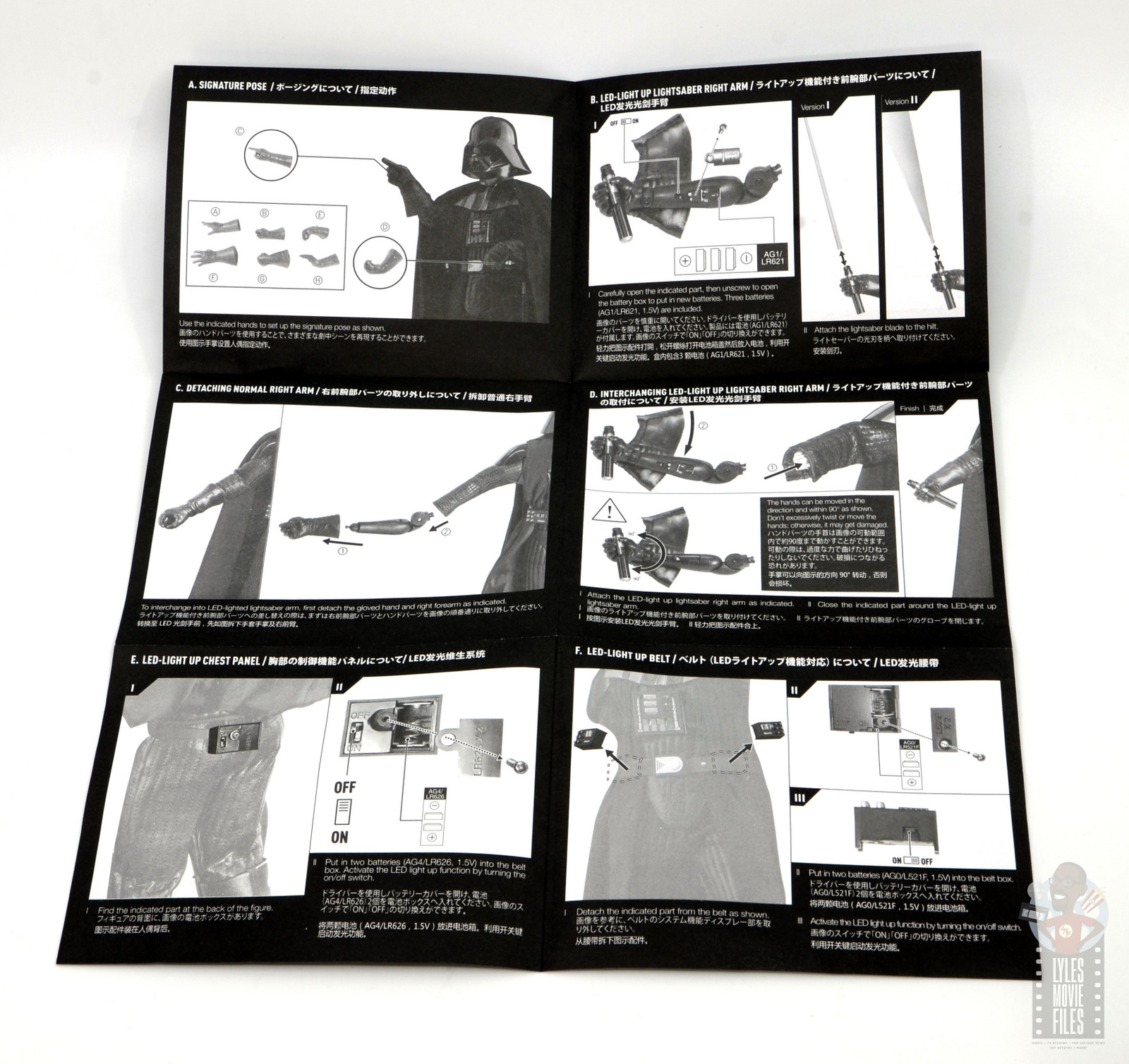 Light Up Feature: This is always the best feature that Hot Toys annoyingly makes more frustrating than necessary. Vader has three four light up points — the chest panel, the belt boxes and the separate lightsaber arm.

The chest panel was the easiest as it only required two of the larger size batteries. Its lights are strong and the on/off switch is easy to get to as well. 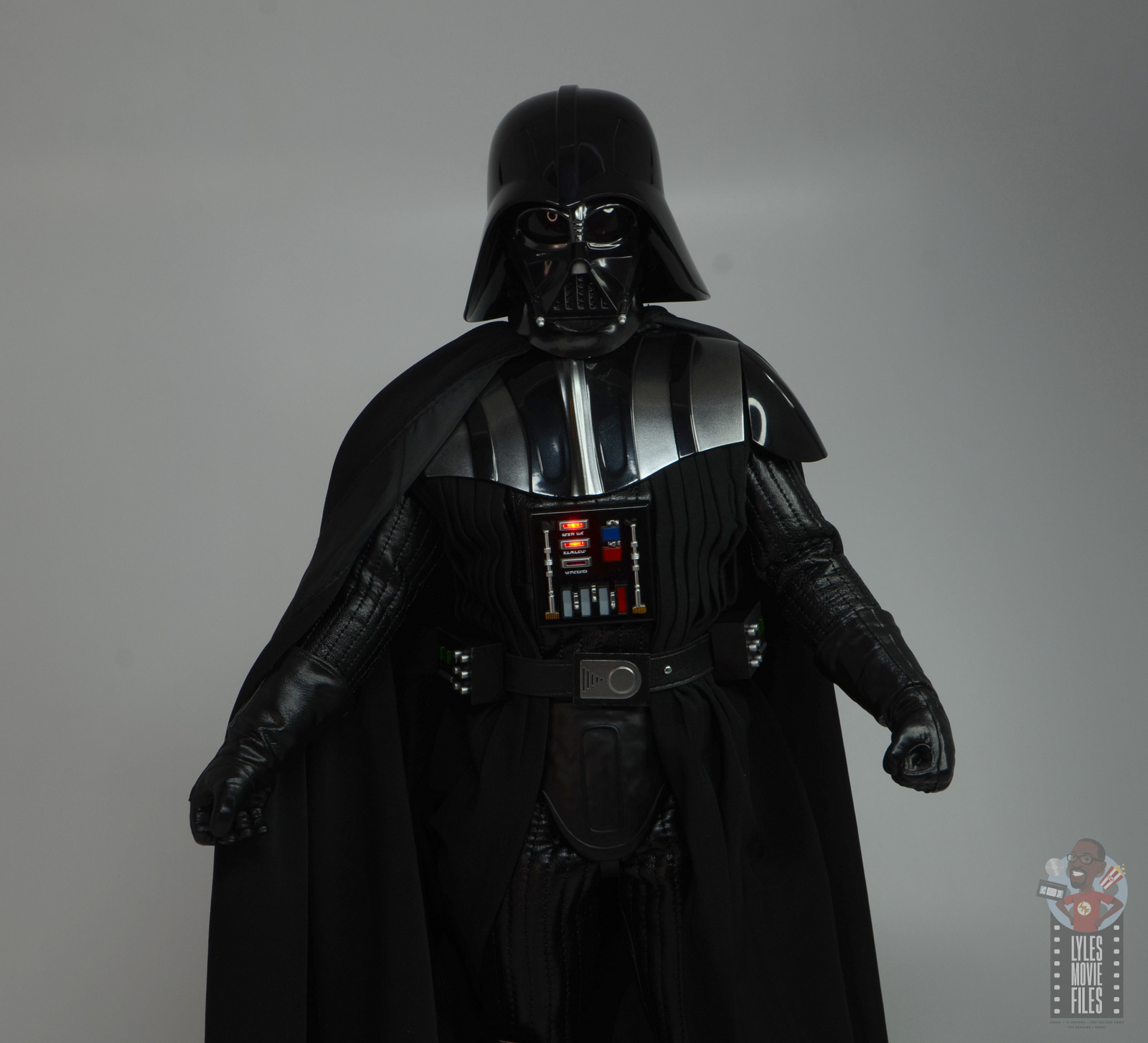 I’ve spent way too much time trying to unscrew the belt boxes. They have tiny, tiny screws that would give The Smurfs fits. I ended up buying another eyeglass repair hit solely to open these boxes. 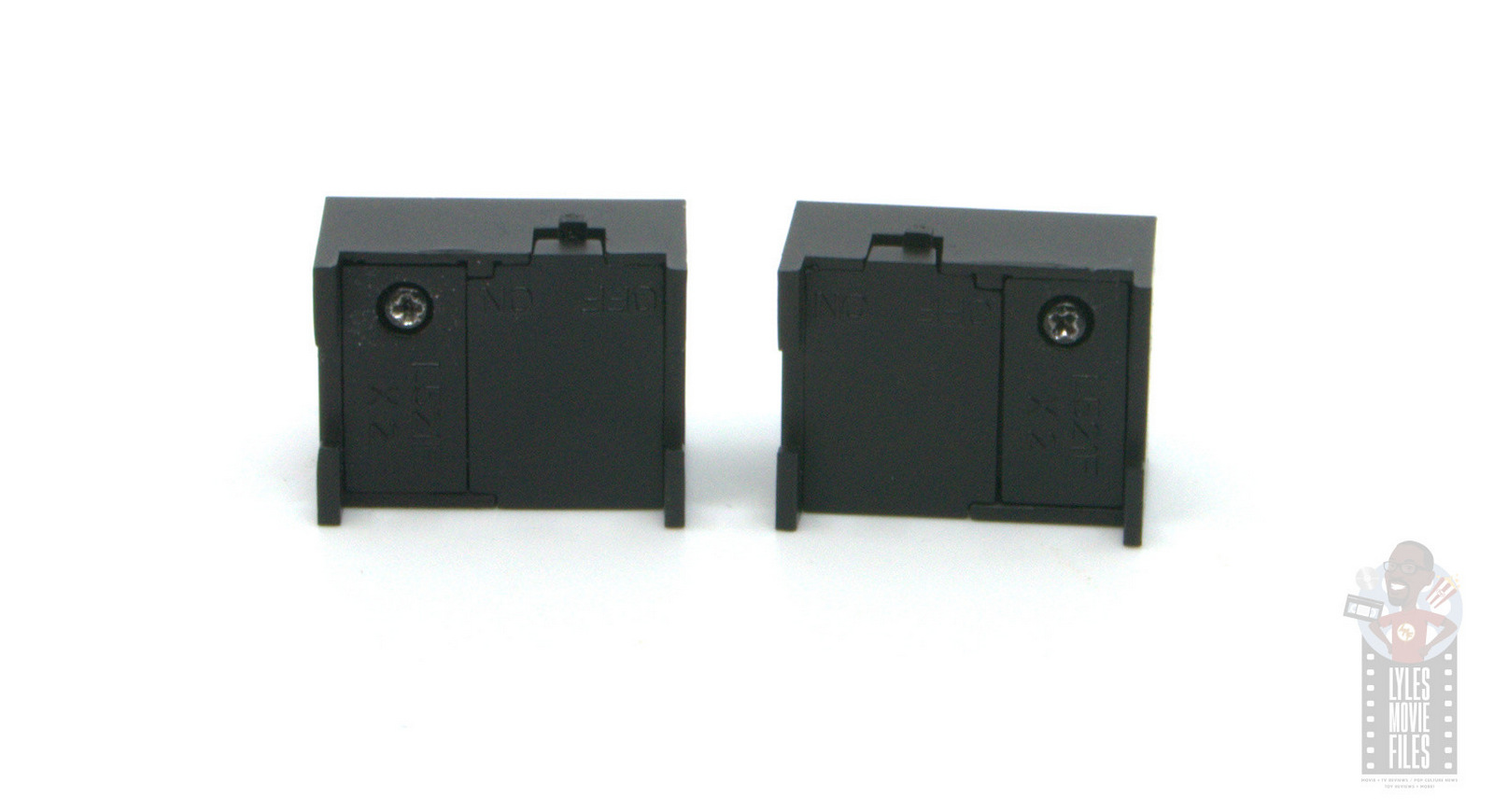 And even then the grip was awful and started stripping the screw. So yeah, I’ve no idea how effective they are or are not.

This is a long term issue with Hot Toys though. If they’re not going to place the microscopic batteries in themselves they should at least include a screwdriver capable of removing the screws. Or just not screw in the panels at all so we can do that with our own screwdrivers. End rant.

Or not. Vader’s right arm, like the Luke Skywalker and Obi-Wan figures, swaps out for a light-up lightsaber base. The light is strong and shows off the red blade nicely. 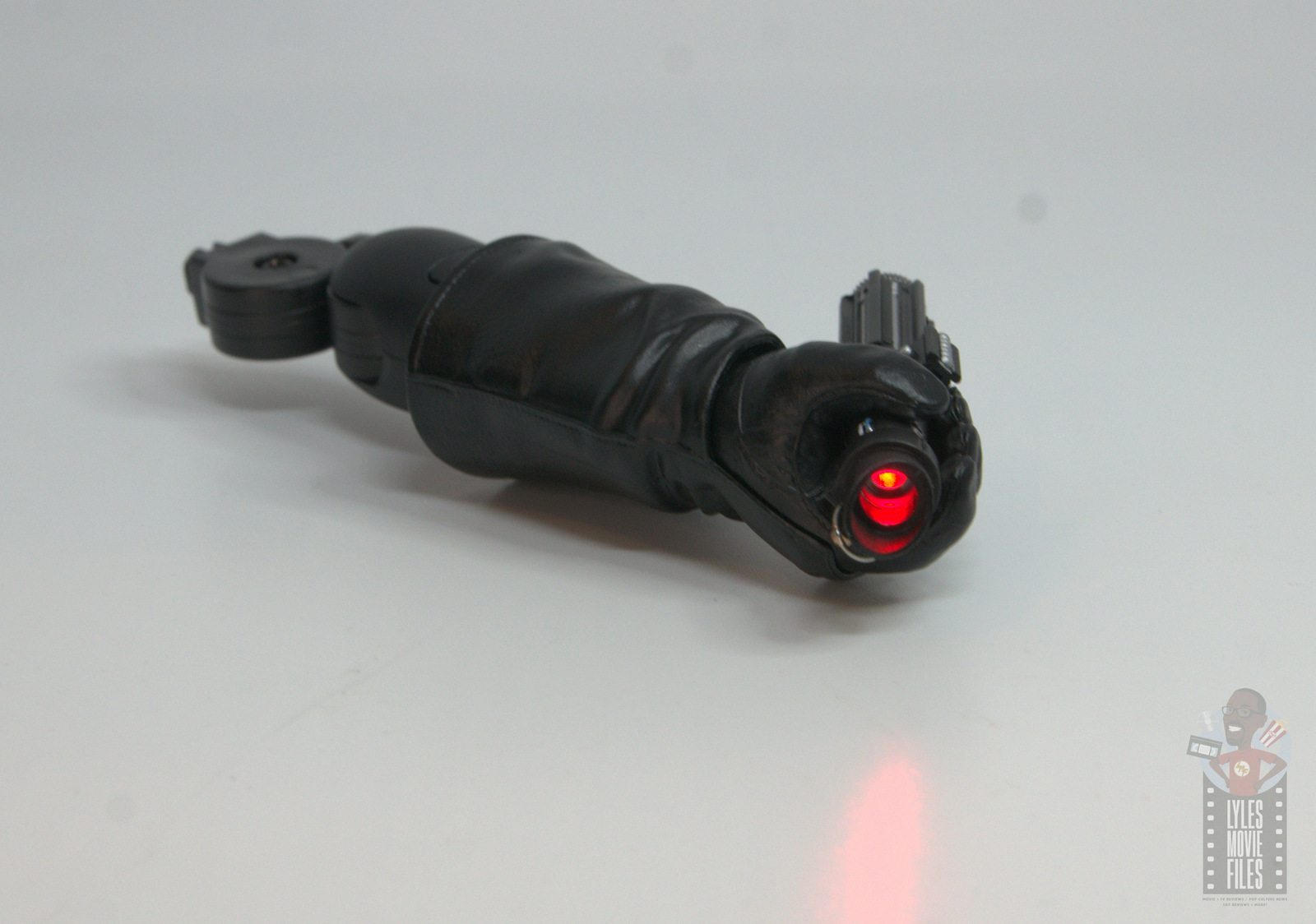 The only catch is unfastening the default arm. Maybe I’m just too chicken with a $300 figure, but after my first unsuccessful pull, I had no desire to try it out. 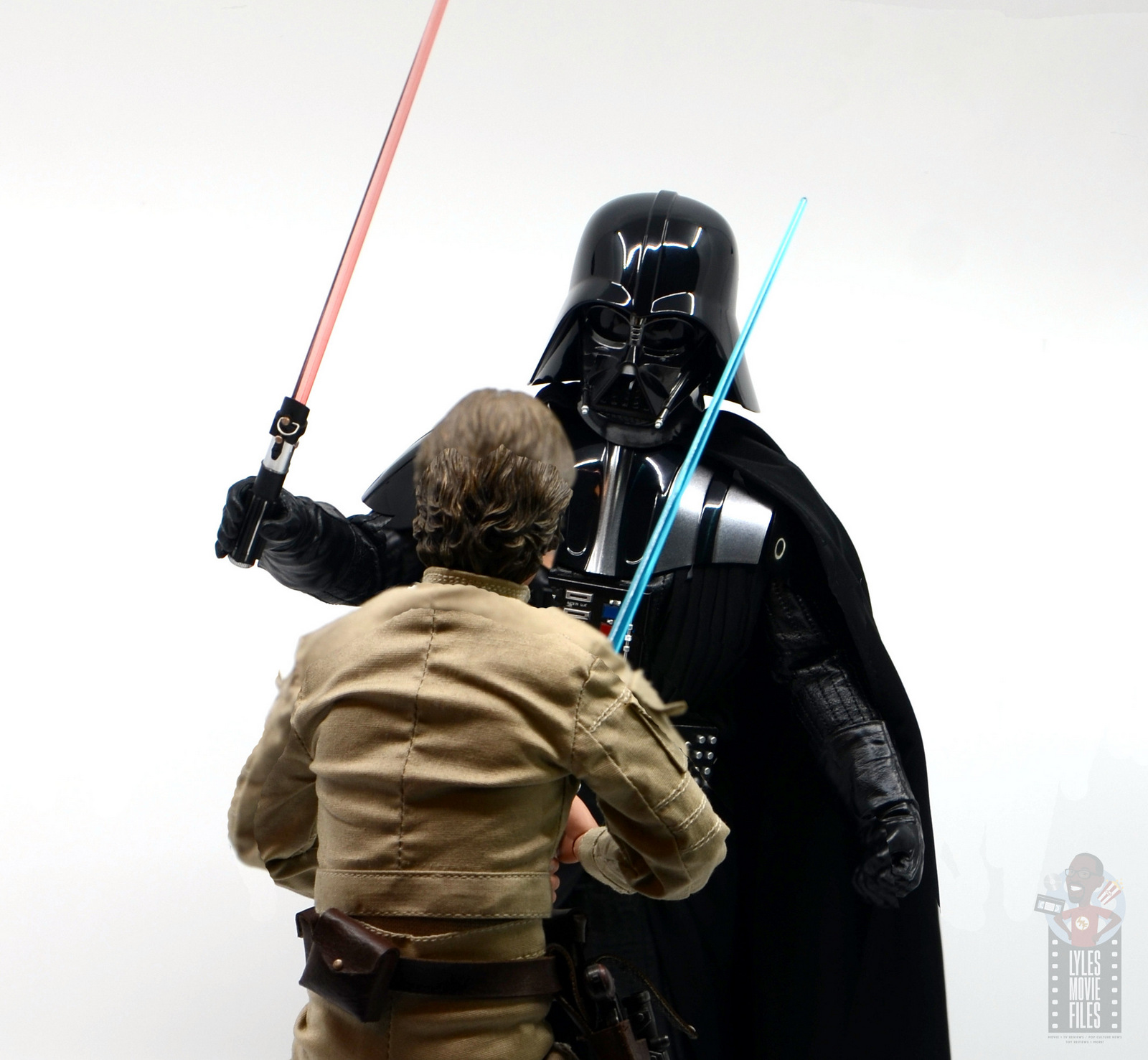 Worth it? At $285 Vader isn’t cheap although I’d argue he’s a better value than some of the other figures that are just a few dollars less. 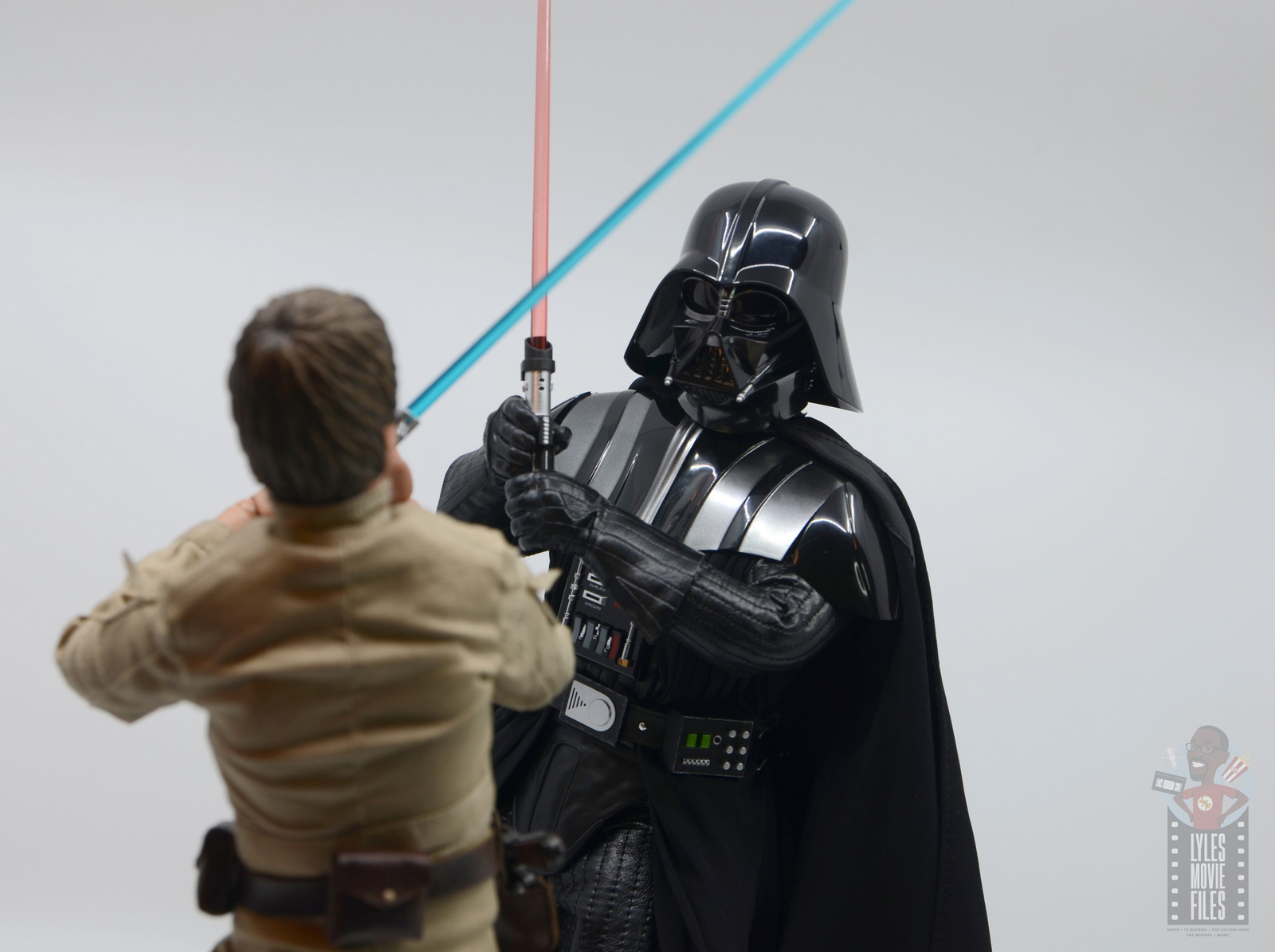 The Bespin Luke all but guaranteed I was getting this the second it came out. It’s taken awhile to open and review, but he looks every bit as amazing as I wanted. He doesn’t get a perfect score since a lot of the add-ones that contribute to the higher cost are a pain or otherwise harder than necessary to use. 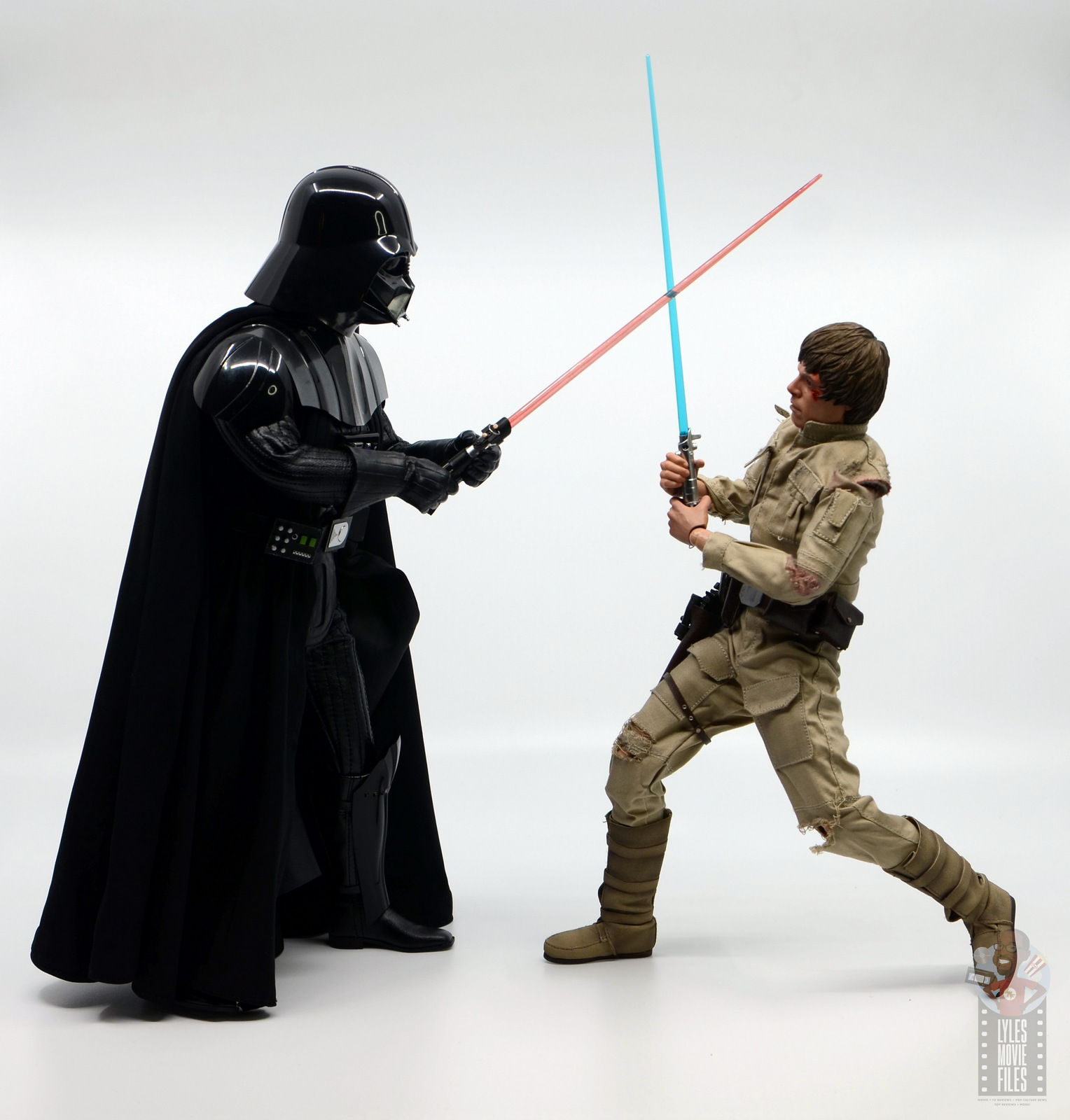 Where to get it? Hot Toys has a new Empire Strikes Back package deco version of Vader now available through Sideshow Collectibles.