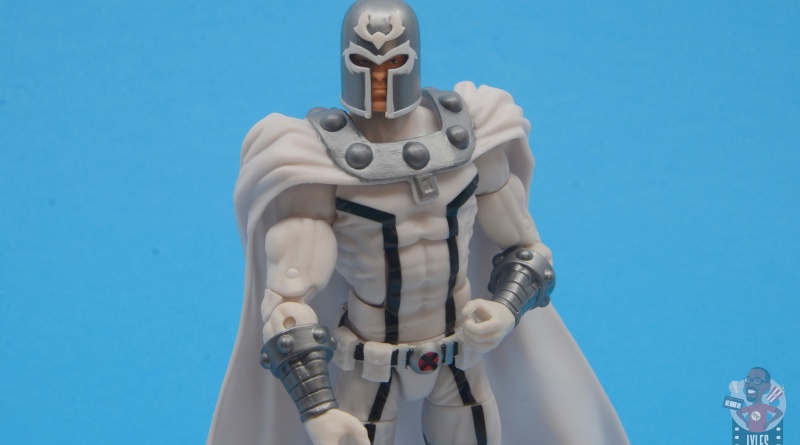 Magneto is reaching the point where he’s been an X-Man longer than their archenemy. I guess we can blame Secret Wars for that initial face turn, but he’s largely stayed committed to fighting to atone for his crimes.

That meant it wasn’t a big shock when Charles Xavier followed in Cyclops’ footsteps and united all of mutant kind and Magneto was one of his first recruits. Magneto has already dabbled with a white outfit, but for the House of X, he opted for a slightly different look complete with sleeves. Hasbro didn’t waste much time in cranking out a wave of House of X.

Since it wouldn’t make much sense to have an X-Men wave without Magneto (cough cough Age of Apocalypse cough cough), he was one of the obvious choices for includes. But did I really need another Magneto in my collection? Let’s find out.

Packaging:  I dig when Hasbro mixes up the Marvel Legends packaging. In this case, the Krakoan language replaces the normal text for Magneto on the front and portions of the rear. 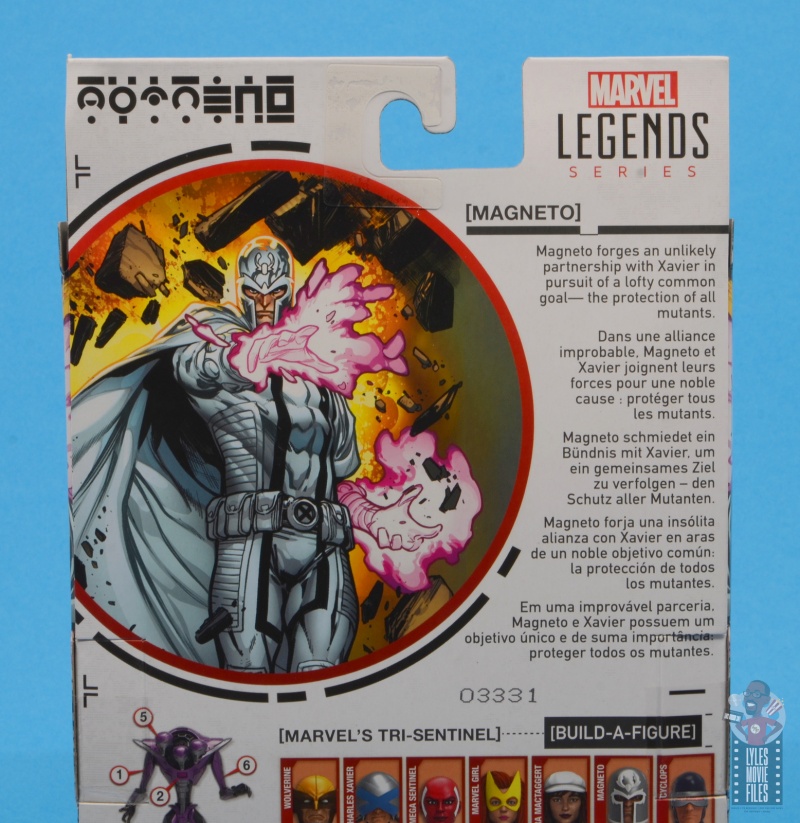 The side portrait looks straight from the comic while the back explains Magneto’s current status with the X-Men and Xavier. 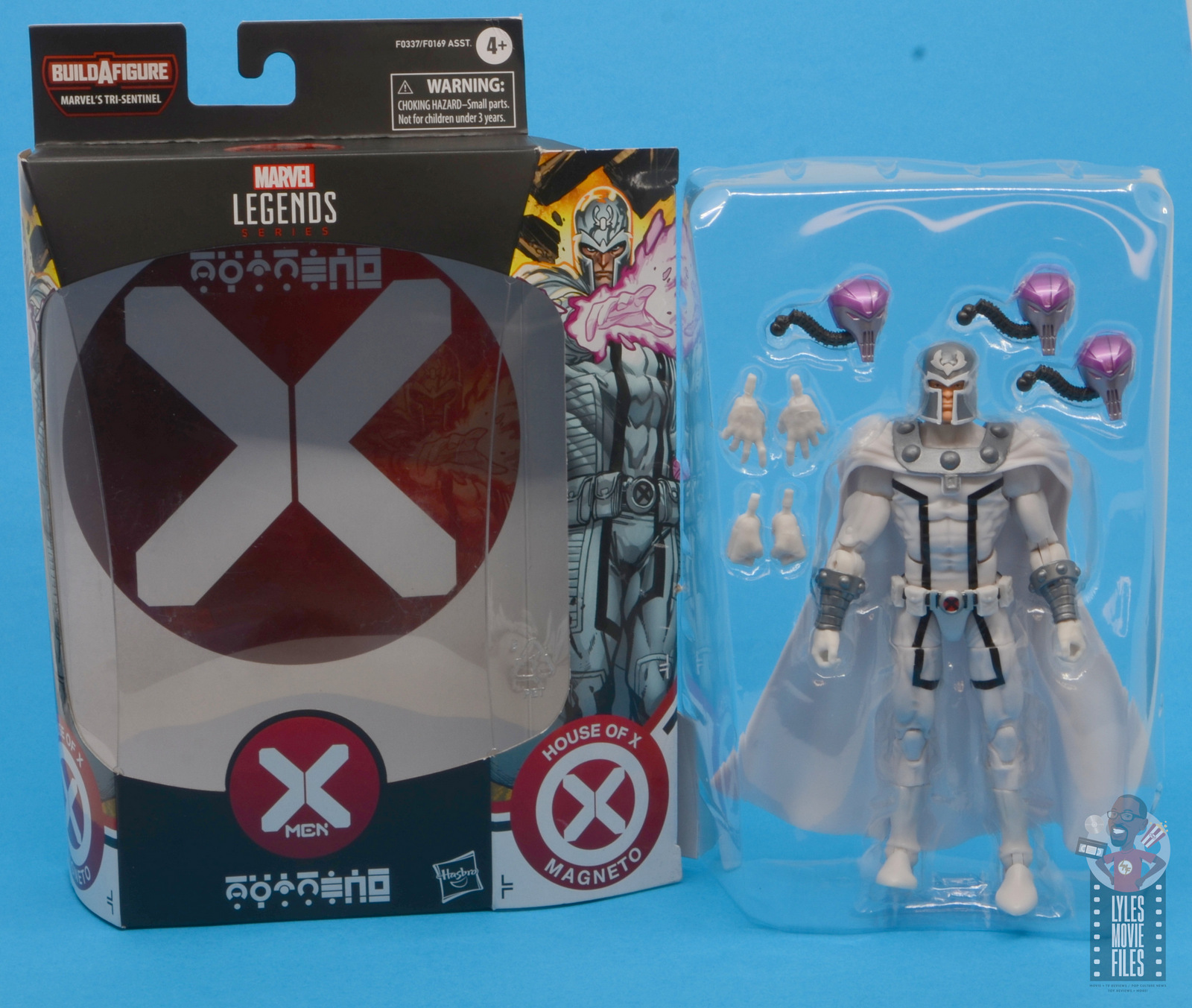 Likeness:  This is pretty close although it’s an example of Hasbro being a bit too ambitious in tackling a modern design. Most of the elements of the outfit are included, but there’s some piping and ribbed sidings. Those aspects give the outfit some needed complexity since Magneto isn’t just wearing basic spandex here. 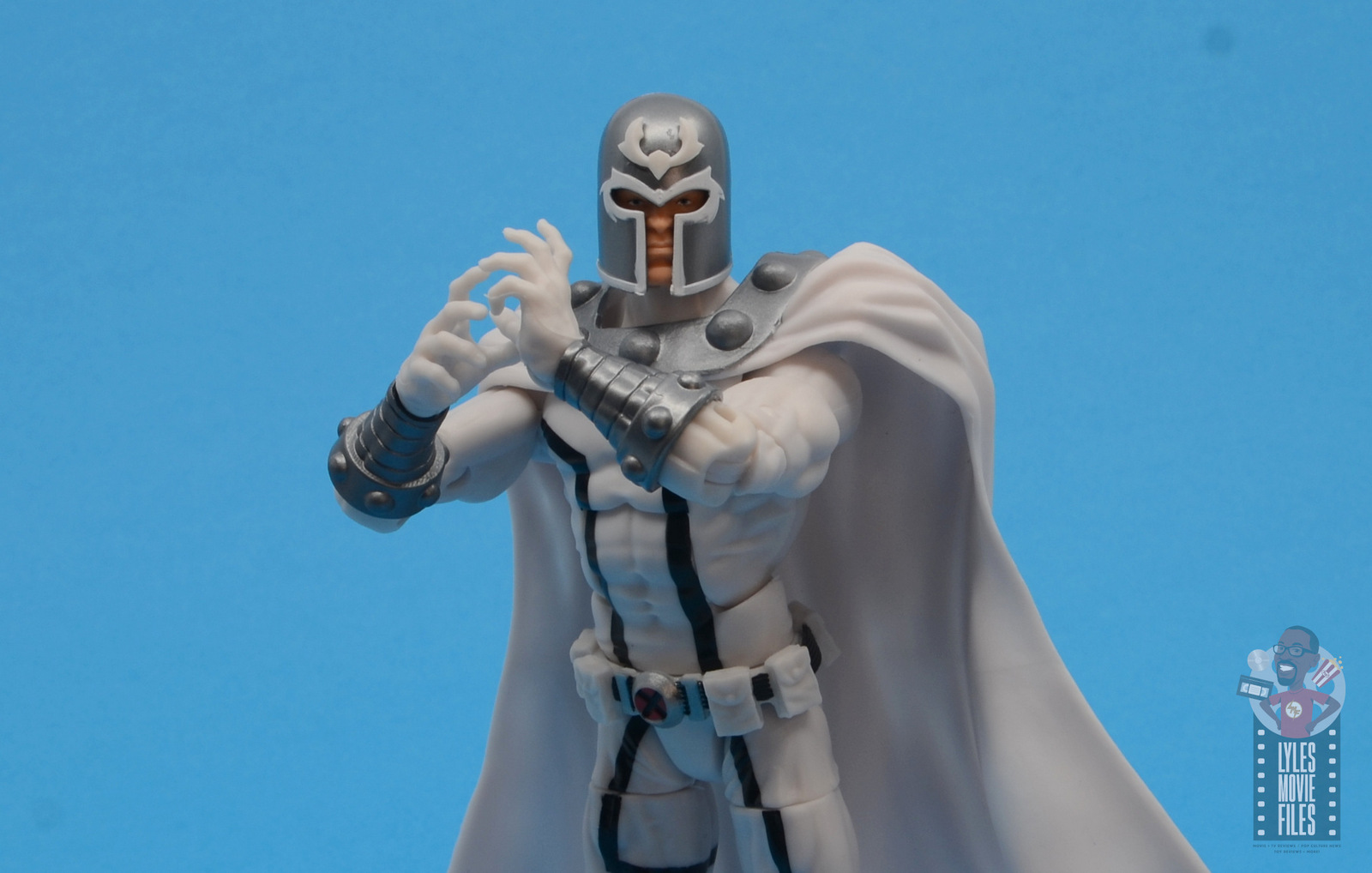 It’s a pretty decent representation of the modern outfit with the use of some parts from existing figures like the Family Matters Magneto and 80th Anniversary Iron Man.

Paint:  This outfit is mostly white and silver with some black accents. The black paint apps are mostly solid with some slight slop. The white lining on the helmet isn’t as crisp as I’d like though as some of the silver still bleeds through.

I do appreciate that all of the white is a pure, white instead of with an added blue or grey wash. 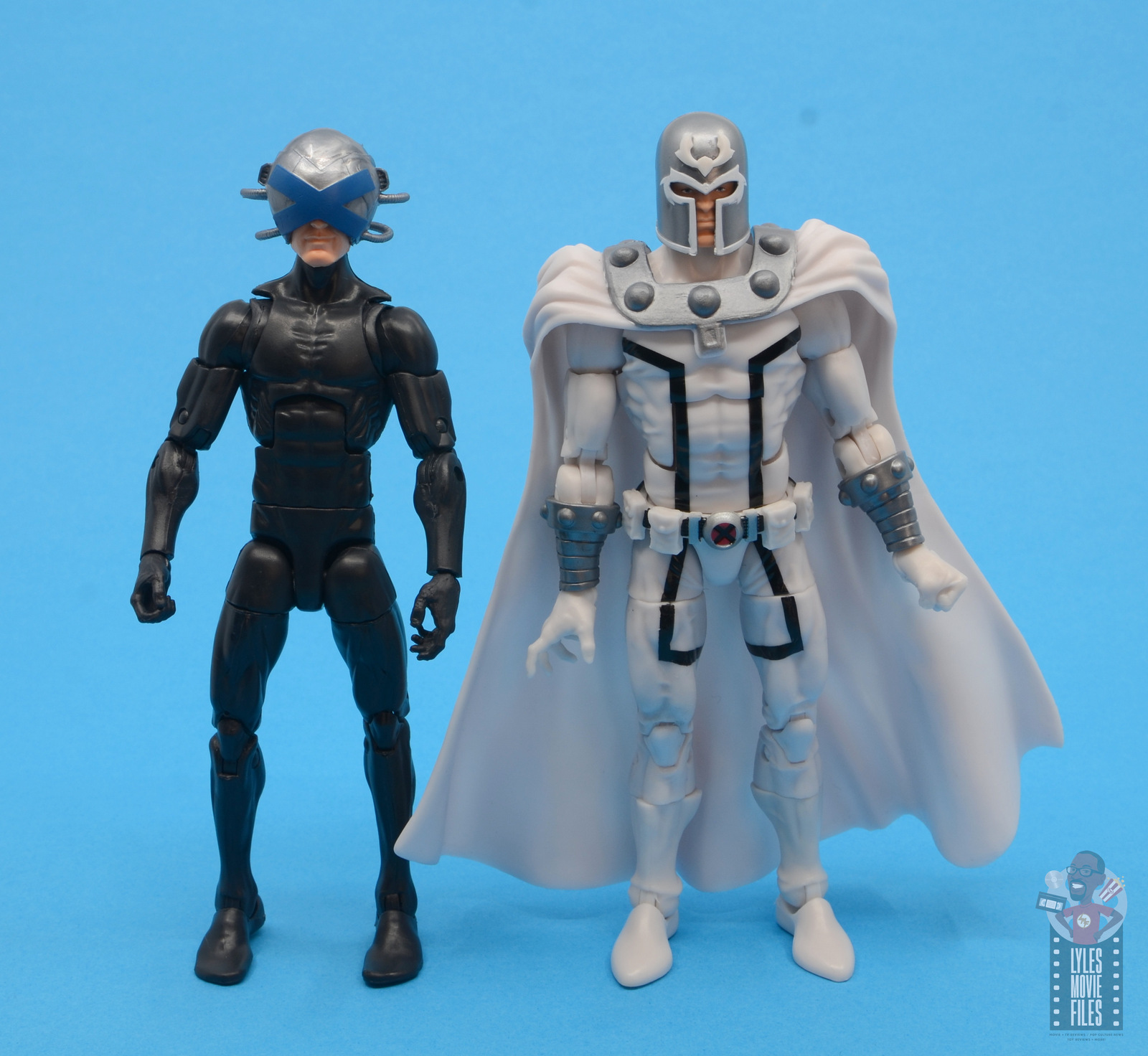 Scale:  Magneto isn’t a giant, but he’s normally portrayed taller than Charles Xavier and about the same height as Cyclops. 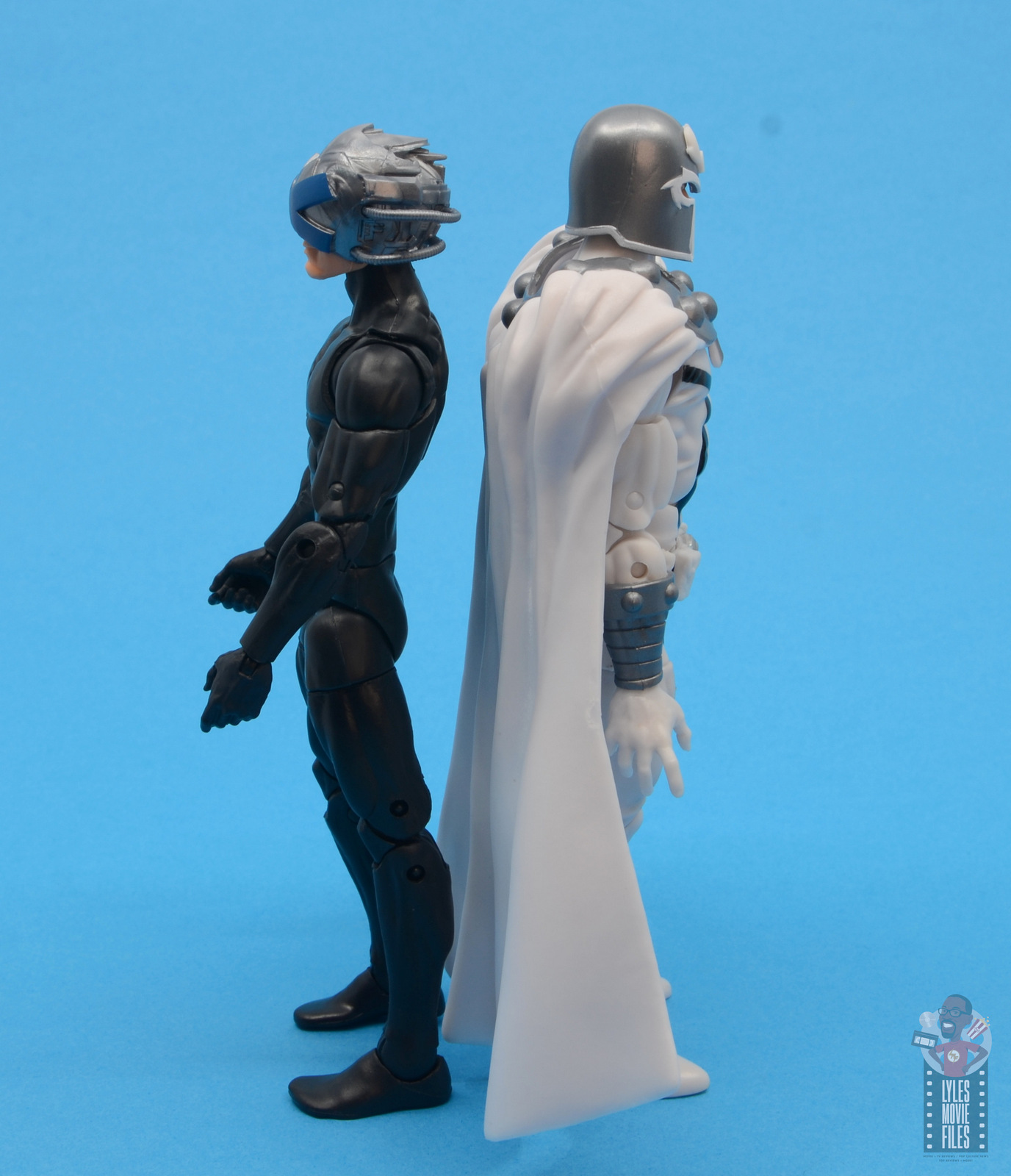 Articulation:  The cape is still a little frustrating thanks to the plug in the back that wants to pop out with just basic posing. Hasbro did give the cape a high enough arc that you can get basic poses without it riding up on Magneto’s shoulders. 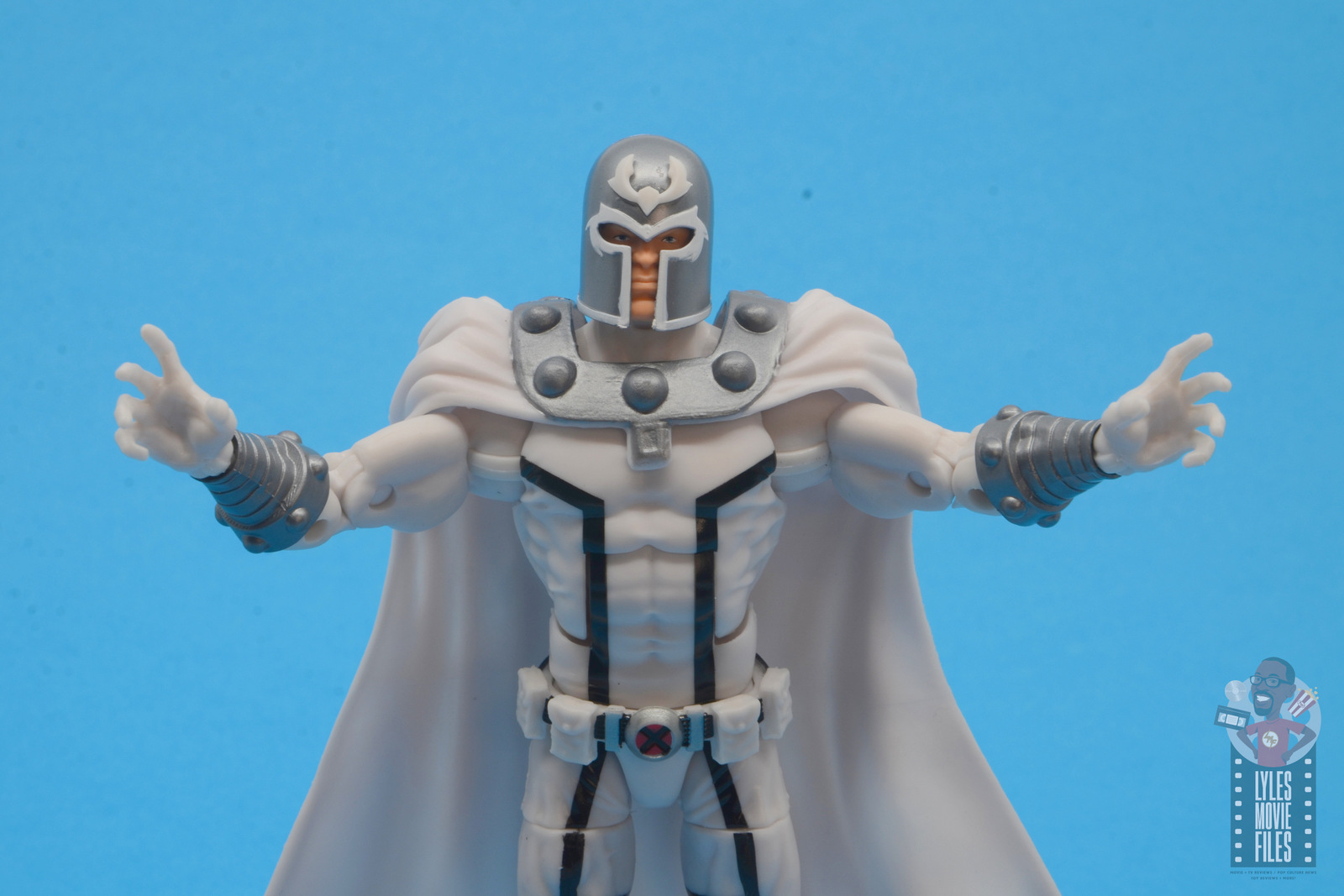 He’s got the rest of the expected Marvel Legends articulation though Magneto is really more of a pose and gesture kind of fighter. 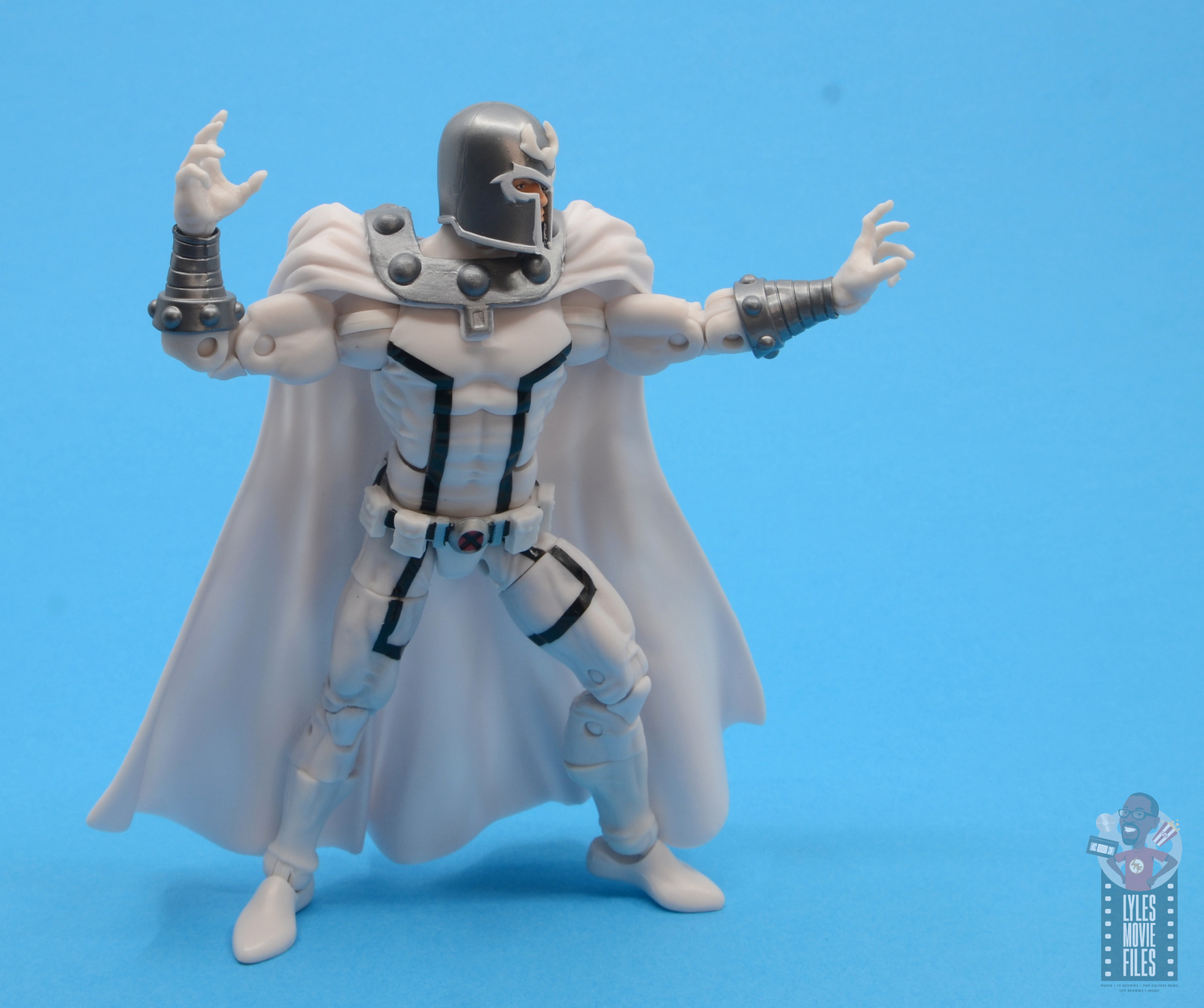 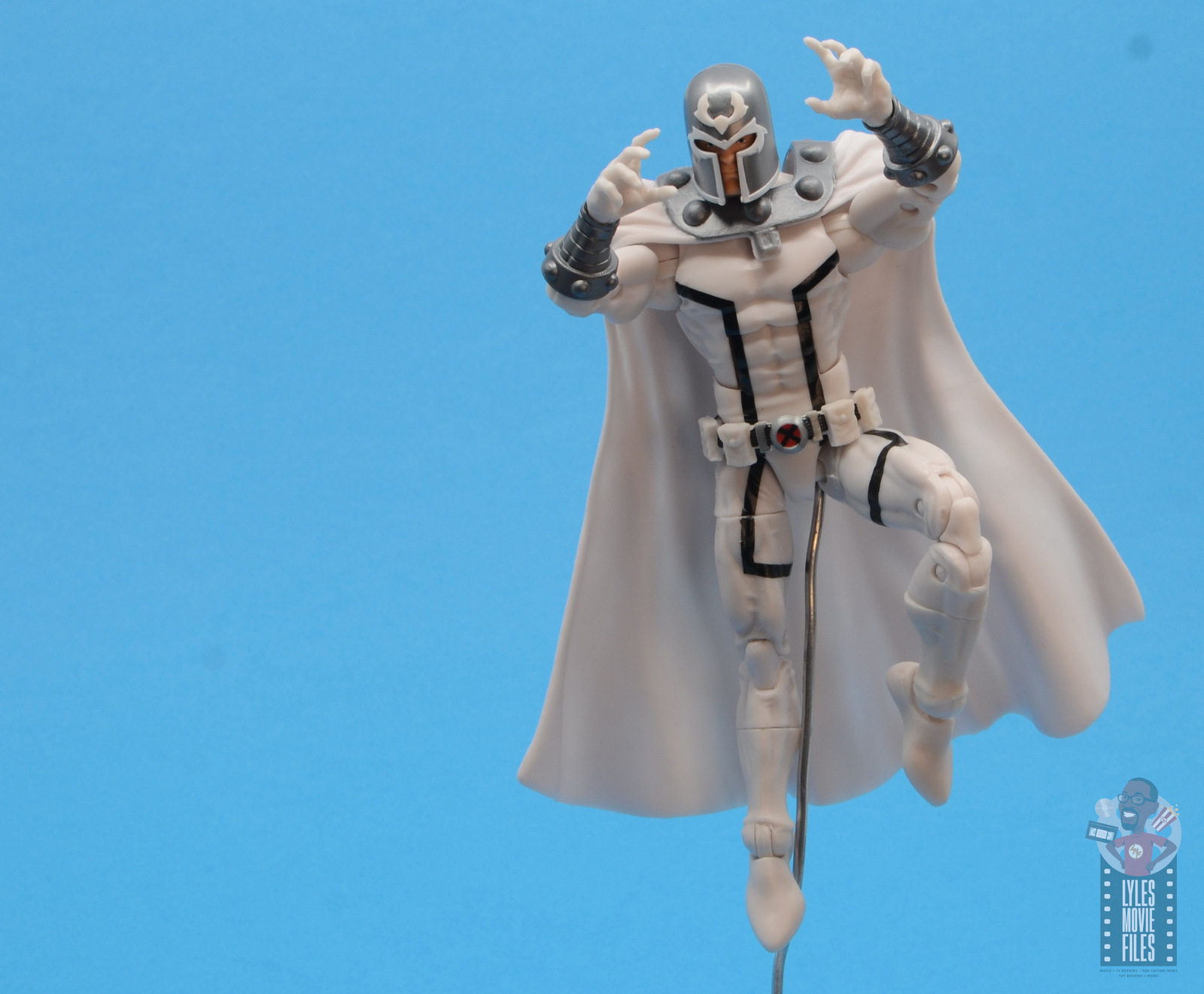 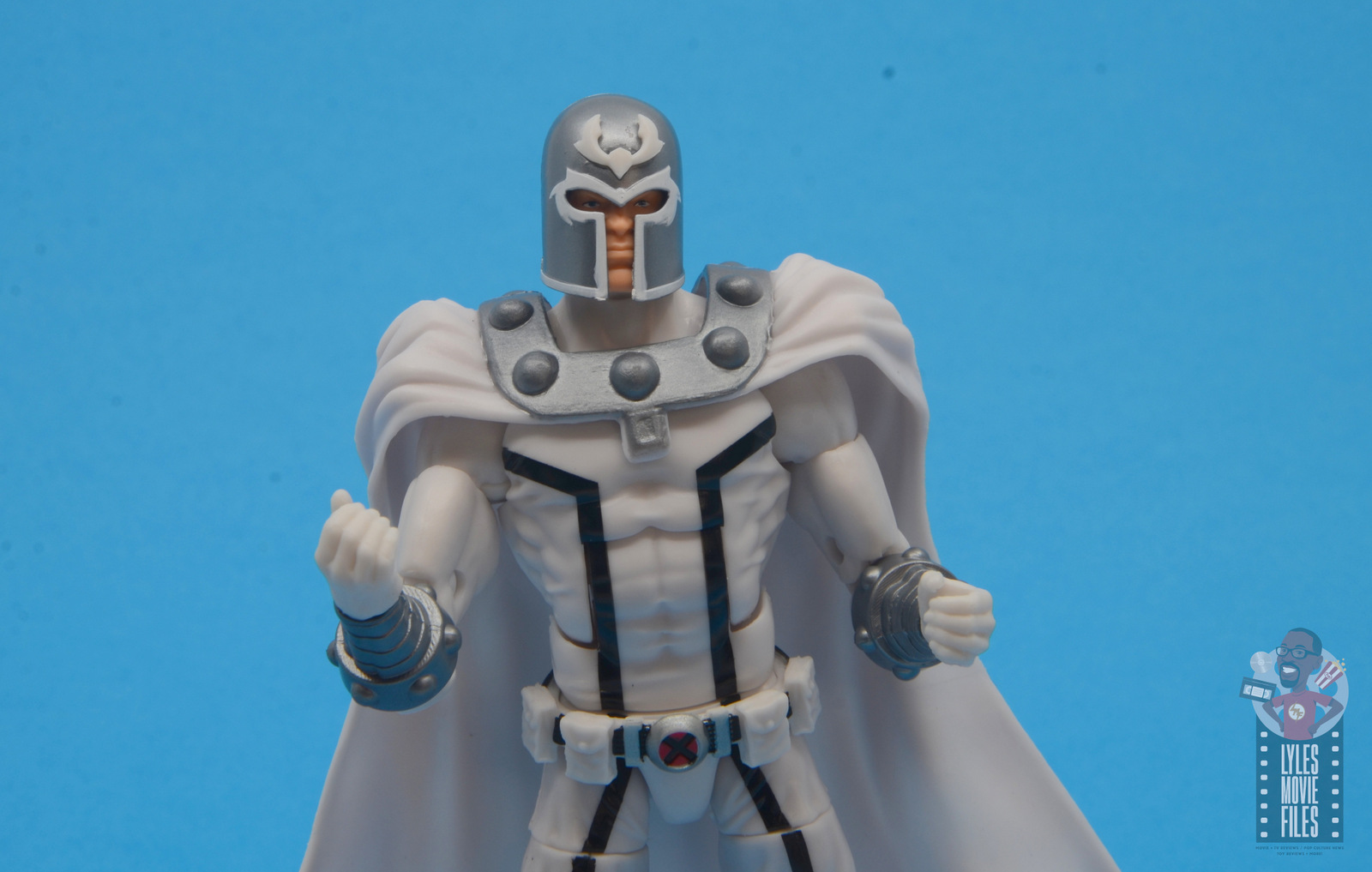 Considering we’ve gotten several, it was surprising we didn’t get an unmasked helmet option.

Additionally, he’s got two pointing hands so Xavier can touch his temples in thoughtful/focusing poses. 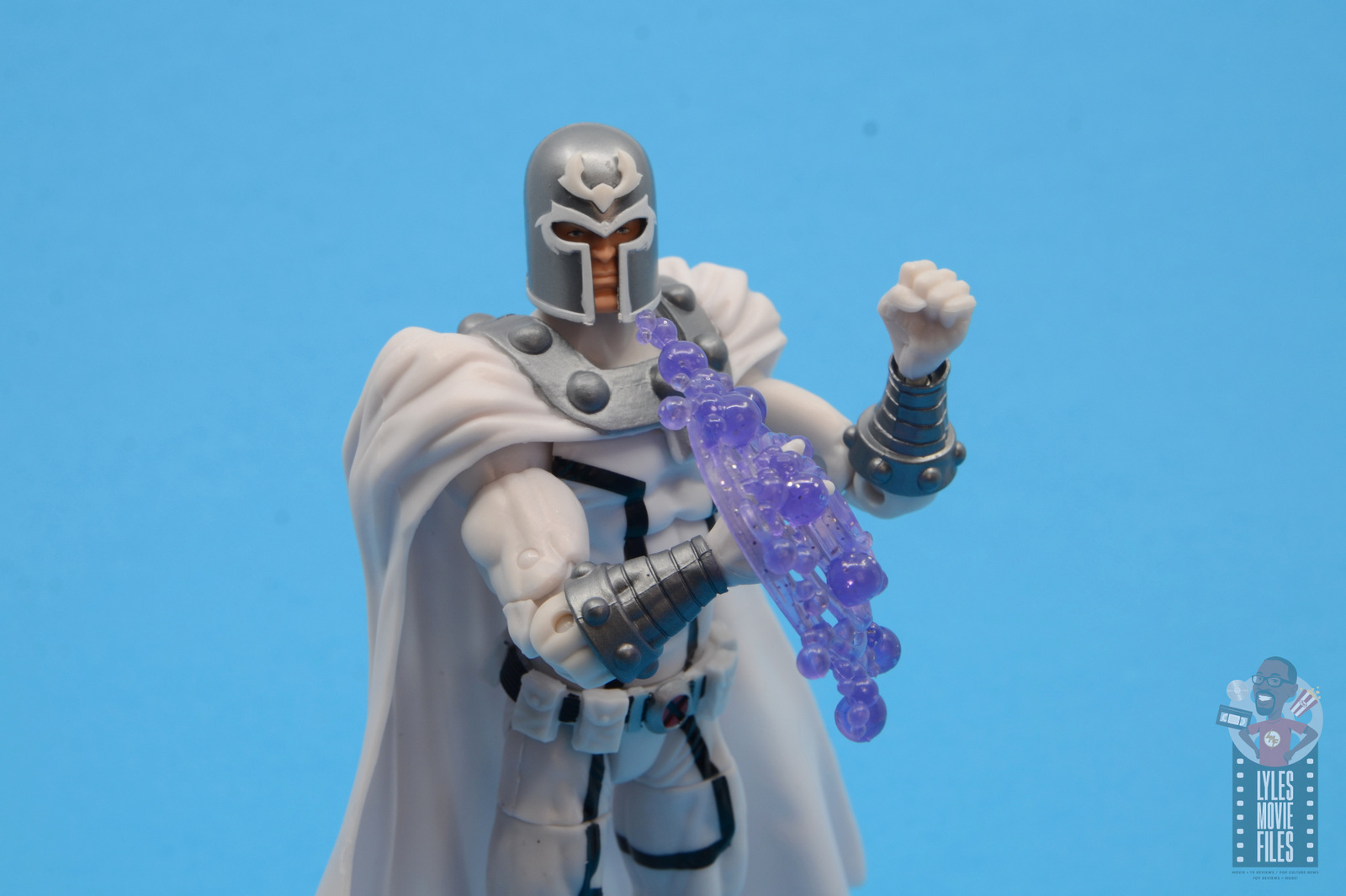 Finally, he’s got the tri heads for the Build-A-Figure Tri-Sentinel from the presumed future of the X-Men. 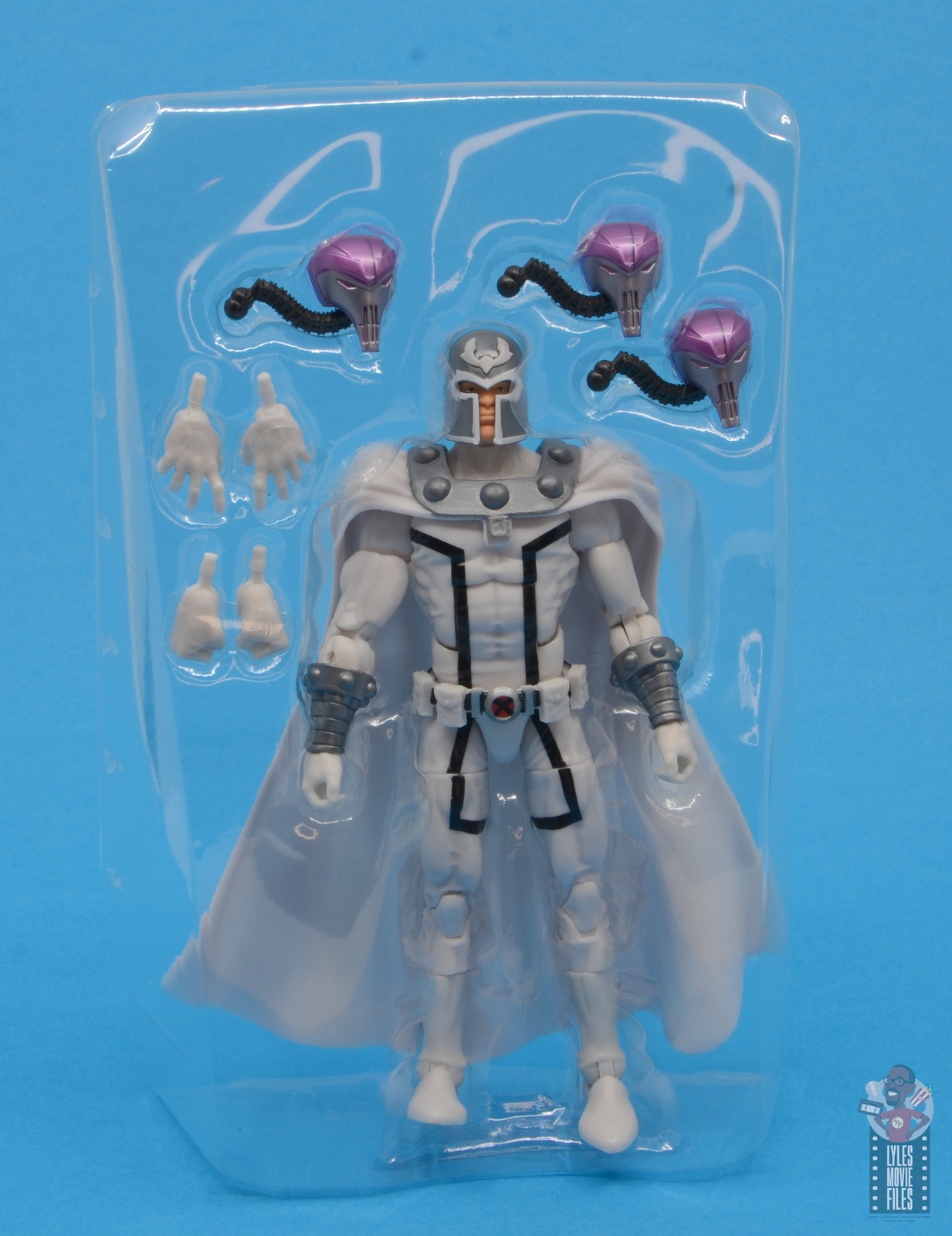 Worth it?  Target had a buy 2, get 1 free sale on figures including pre-orders so I got the entire wave with that awesome deal. Getting each figure for $13.33 worked out to Black Friday prices so it’s hard to complain.

Magneto’s House of X look is one of his cooler modern attires and Hasbro did a pretty decent job bringing it to figure reality with the exception of some of the costume details to really push it over the top. 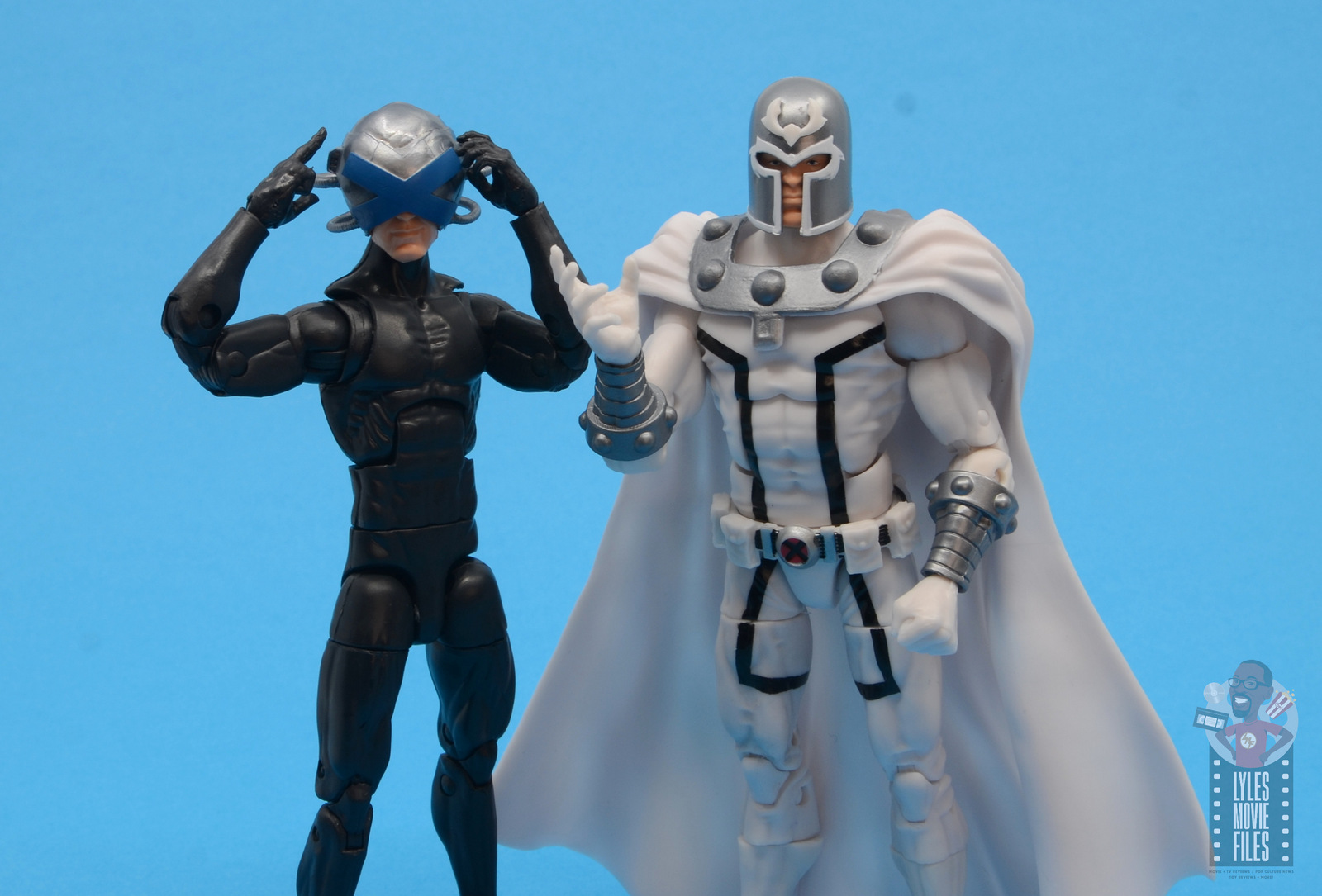 Where to get it?  You can grab Magneto from Amazon, Entertainment Earth and Hasbro Pulse.