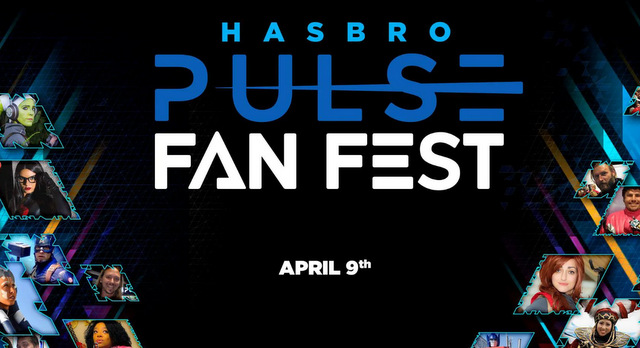 Pulse Con was such a big hit and now Hasbro is back again with its first ever Hasbro Pulse Fan Fest with big reveals slated for all of its major brands. I know the Marvel and Star Wars brands will kill it and since I’ve started down the rabbit hole of Transformers again, I’m looking forward to those reveals as well. But the one I’m most excited about, mainly since we get so few Fan First Fridays and info and releases come out in teeny tiny bits is the G.I. Joe line.

Like Pulse Con, Pulse Fan Fest will be held virtually starting at 11 a.m. April 9. SYFY Wire on-air correspondent/writer/producer Jackie Jennings will be back to host.

Here’s the break down of what’s in store for Hasbro Pulse Fan Fest.

A new collection has just landed! It’s OFFICIAL! Hasbro has partnered with Epic Games and created an all-new toy line! Join members of the Hasbro Marketing & Design teams as they debut the all-new Victory Royale line! Get ready to drop in as we unveil three legendary new items, including a first-time character to appear in toy! Gear up for some next-level reveals!

Worlds continue to collide on Transformers! Join members of the Hasbro Marketing & Design team as they reveal toys from Wave 3 Kingdom and share some exciting news about the final chapter of Netflix’s Transformers: War for Cybertron trilogy.  Don’t miss out as we take a closer look at Kingdom Commander and Titan Class figures, including a first-time character to appear in toy! And if you thought the Pulse exclusive weapons pack was epic, you’ll find the next one to be a blast. Finally, we will reveal a new Pulse exclusive toy capsule in partnership with IDW Publishing that will turn the Transformers universe upside down. Get ready for a panel that’s… More Than Meets the Eye!

Join members of the Hasbro Marketing & Design teams as they discuss the popular Hasbro Star  Wars line, including the Black Series and The Vintage Collection. Attendees will get an in-depth look at Hasbro’s latest action figure and premium roleplay offerings from across the Skywalker saga and beyond. Word on the Holonet is there may also be a few surprises.

Check out the official page for more information.