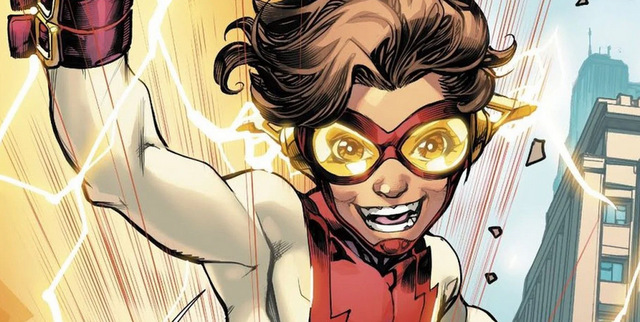 Oh Flash, when will this cycle end? It’s like Barry going back through time repeating the same mistake over and over. Today, The CW announced Jordan Fisher (To All The Boys: P.S. I Still Love You) will be joining the cast as Impulse, the son of Barry and Iris.

The future son of Barry Allen and Iris West- Allen, Bart is the fastest teenager on the planet! But due to Bart’s penchant for wildly impulsive behavior, stunned parents Barry and Iris will have their hands full trying to teach their new son patience. But it’s a task they’ll have to accomplish, in order for their family to work together and stop Team Flash’s biggest threat yet!

Jordan Fisher’s first appearances as the fan-favorite character of Impulse will also coincide with THE FLASH’s special 150th Episode, which airs this season on The CW.

There’s a lot to unpack here. First off, the series has already gone through the plot line of Barry and Iris trying to train their child who’s learning to be a superhero with Nora/XS in Season 5.

That was after the series already established a bad habit of introducing a new hero for Barry/The Flash. Season 2 gave us Cisco and Killer Frost. Season 3 was all about Kid Flash and Jesse Quick. Season 4 we did this dance with Elongated Man. Last year was about Allegra. And in too many of those cases, the season revolves around a new hero that becomes a non-factor the next season.

This is a tired crutch the writers have relied on for way too long and it doesn’t sound like Impulse is going to fare any better. Randomly tossing in XS was a bad idea at the time, but if the writers wanted to explore the Barry and Iris as parents dynamic, it would have been better served with Impulse even if in the comics he’s Barry’s grandson.

The second half of last season didn’t instill me with a ton of confidence especially since Team Flash is ridiculously overcrowded as it is now.

I don’t know. Maybe the quality of the Disney+ shows have spoiled some of these CW shows for me. What do you think about this news of Impulse arriving?