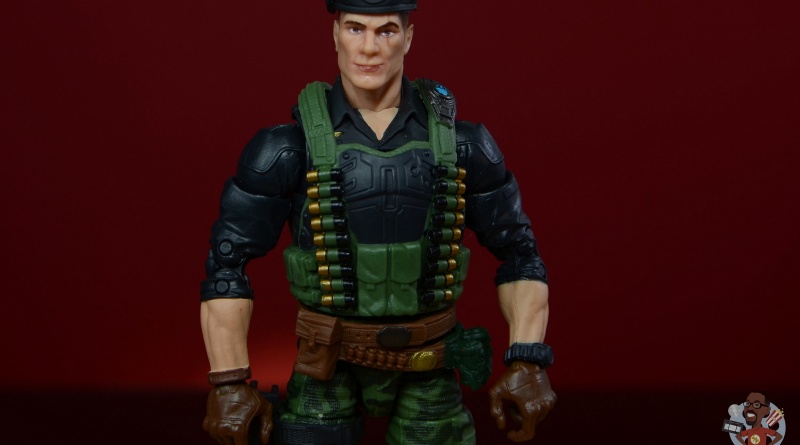 Flint is my favorite G.I. Joe. I remember the excitement of finding him and Snake Eyes ver.2 on the pegs at Toys R Us and them being the core of every mission from that point on.

For me, a Joe line is not complete without an excellent version of Flint so my hype level hit the roof when I saw the prototype of the Classified Series take on my go-to Joe leader.

Package:  I love the package art as it captures that James Bond kind of appeal of Flint with his heroic stance on the front and the action shot on the side. I’d definitely be down for the poster of this artwork.

The back features some slight adjustments from the first wave with Flint, Lady Jaye, Beach Head and Major Bludd added. 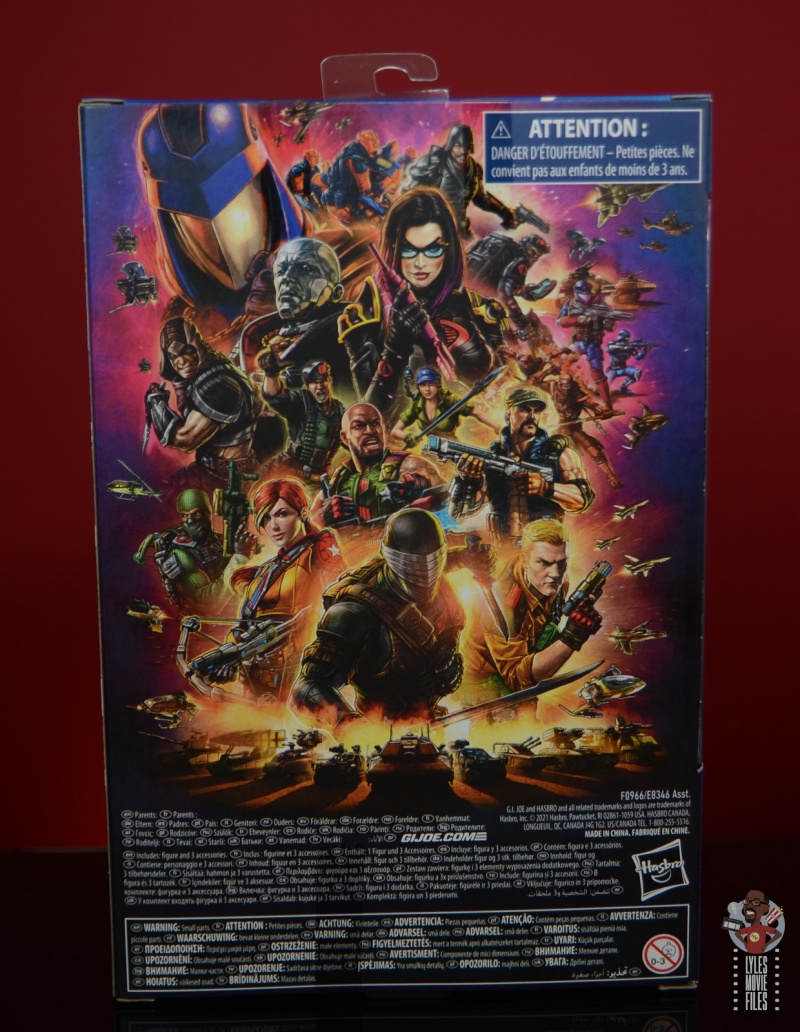 Flint is a consistent specialist as he ranks at three-stars in leader, light weapons, rotary wing pilot and tactics.

Flint is a mission specialist and leader for G.I. Joe, providing tactical information and training to the team to make sure they’re ready for whatever Cobra throws at them. He’s a living database of scenarios and tactics and always has his team prepared when he leads them into the field.

I really like the emphasis of Flint’s leadership and role as one of the prominent members of the Joe hierarchy. 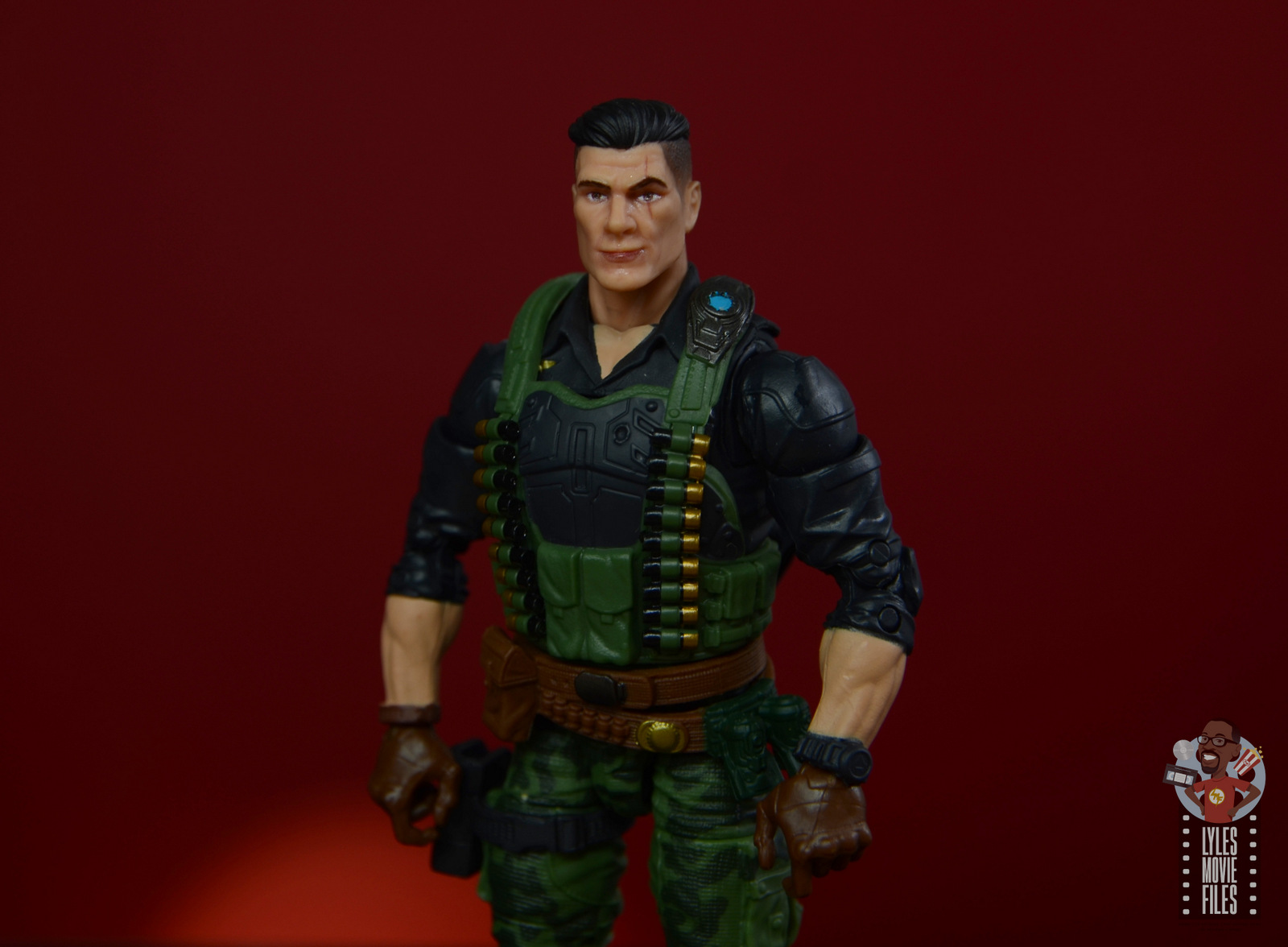 Likeness: I’ve always loved Flint’s design from the black beret, the shotgun shells straps, the dangling belts, rolled up sleeves, camo pants and two tone boots. The third series of Joes were the ones that really marked a departure from the traditional military vibe of the team, but the fourth wave Joes have easily my favorite designs.

I mention all that because I was going to be very tough on the Classified Series interpretation of Flint. Some takes like the 12” Hasbro series and the Sigma Six version didn’t capture the essence of Flint at all. Fortunately, that’s not the case at all here as the Hasbro team created a perfectly sensible update to the 1985 design that still captures the feel of Flint’s debut attire.

He’s got the collar shirt with a flak vest and the shotgun shells! Maybe that’s impractical in a fight, but that’s the signature aspect of the outfit and was essential. 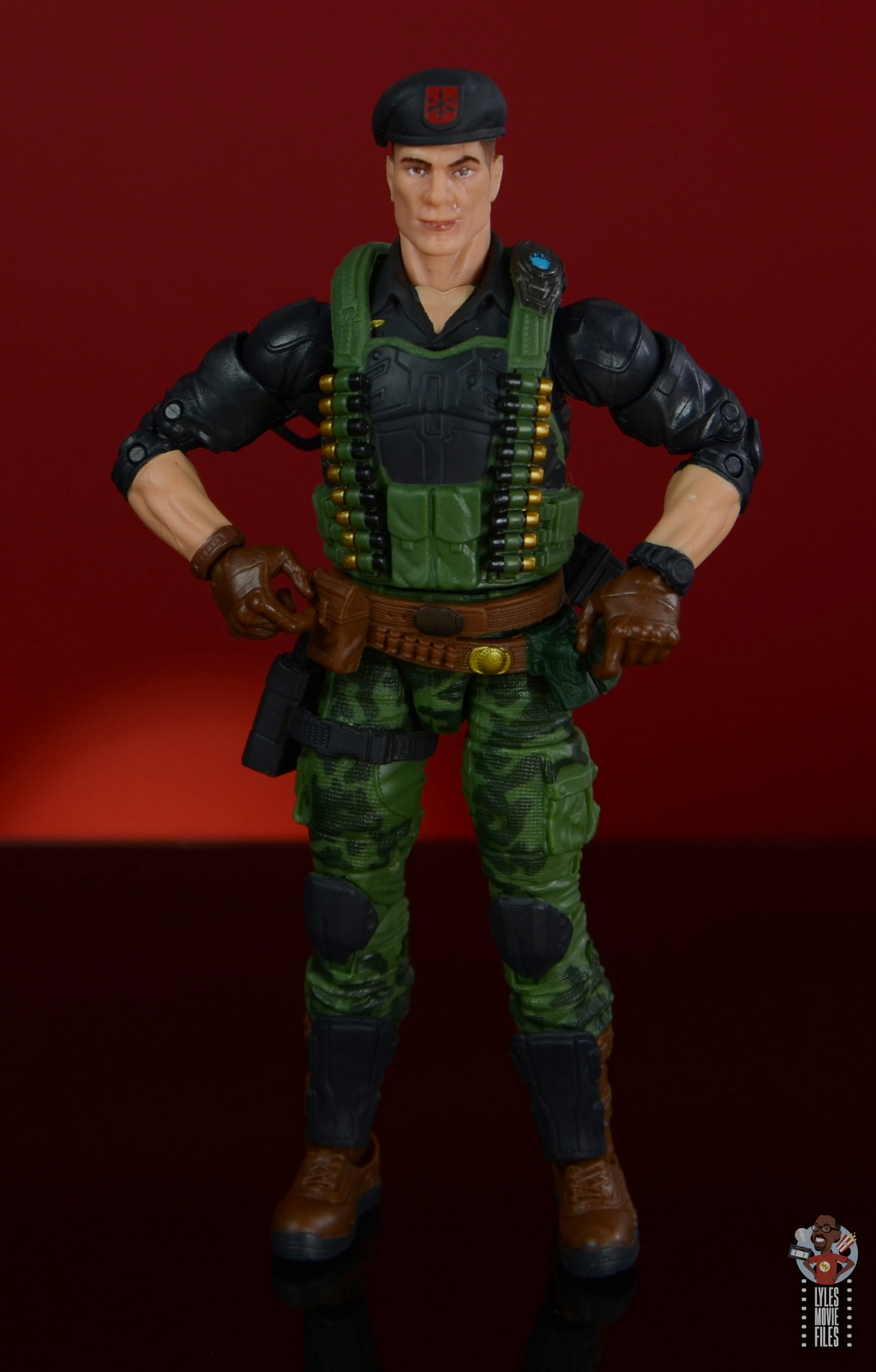 Flint also has his duel belts with pouch on the left side and the holster on his right leg. I wish the belts had the eagle sculpted onto the top buckle, but otherwise I’ve got no complaints.

There’s a decent amount of reuse from the Duke figure, but their outfits were fairly similar and there’s enough unique elements that it doesn’t feel like a cheap rehashed with inappropriate part choices. 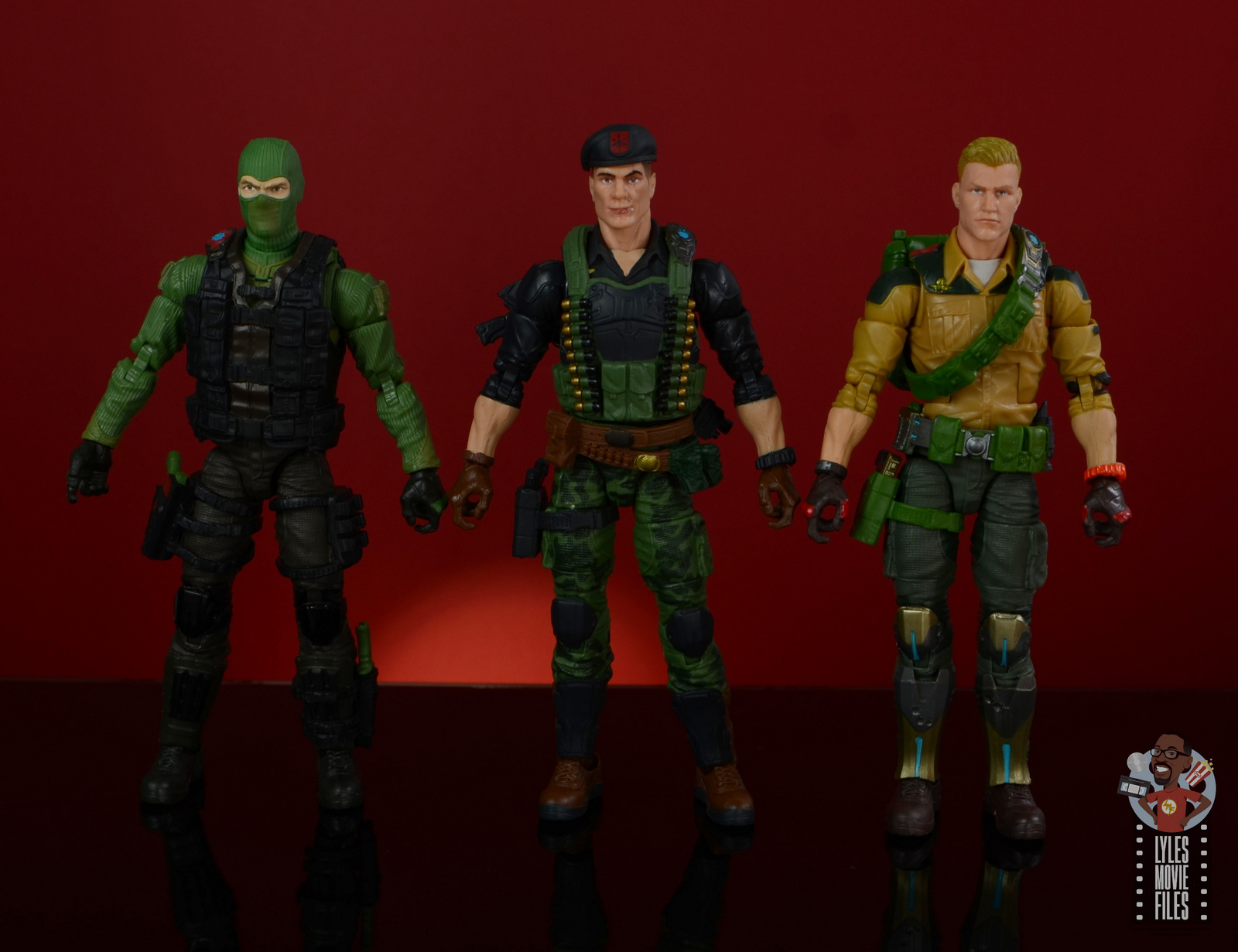 I love the rugged nature of the head sculpt with the strong nose that’s likely been broken a few times, the scar over the left eye and the oh so slight smirk showing Flint’s confidence in any situation. 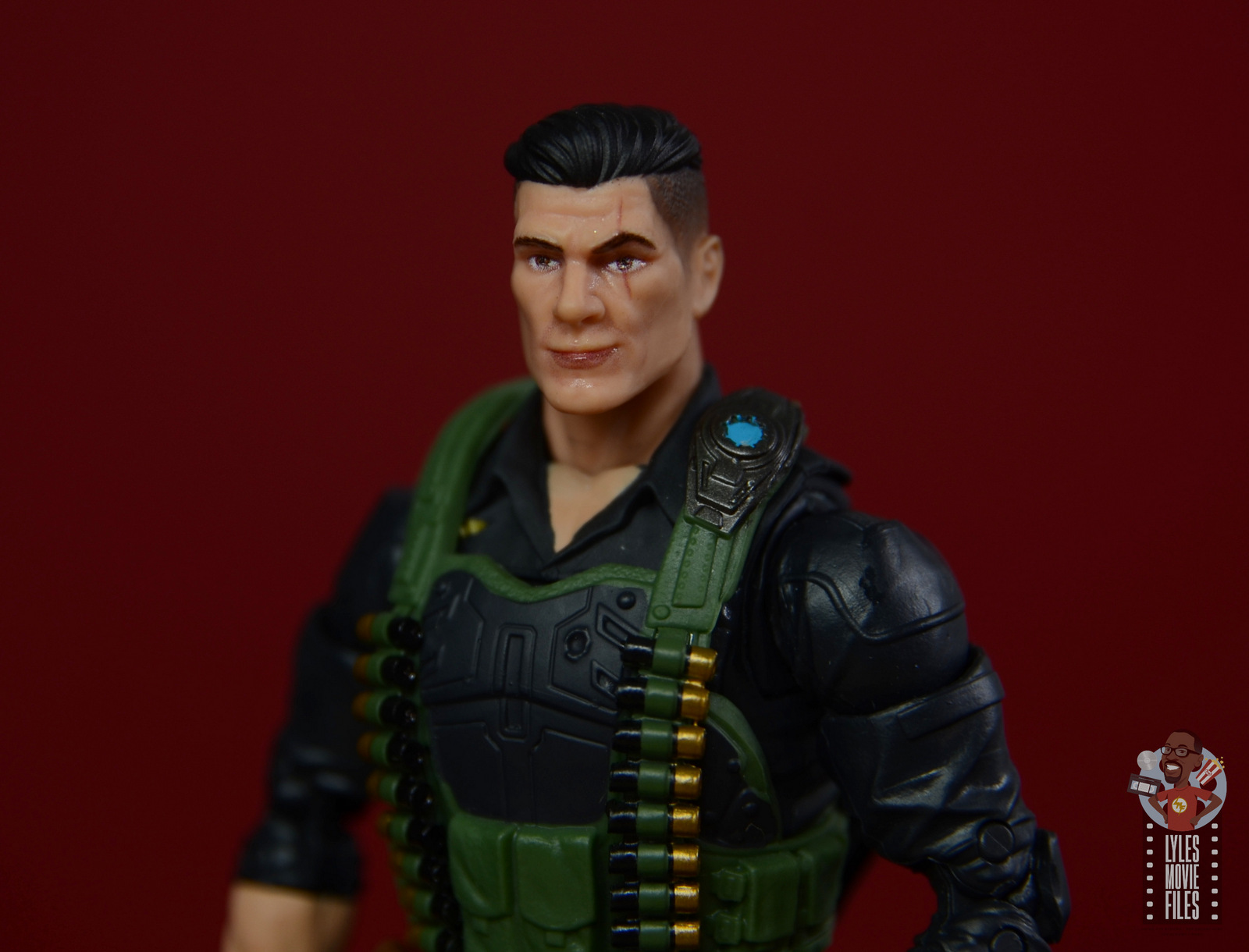 The beret has the proper slope and fits Flint’s head nice and snug. It seems like Flint has a new style of shin guards for his boots. 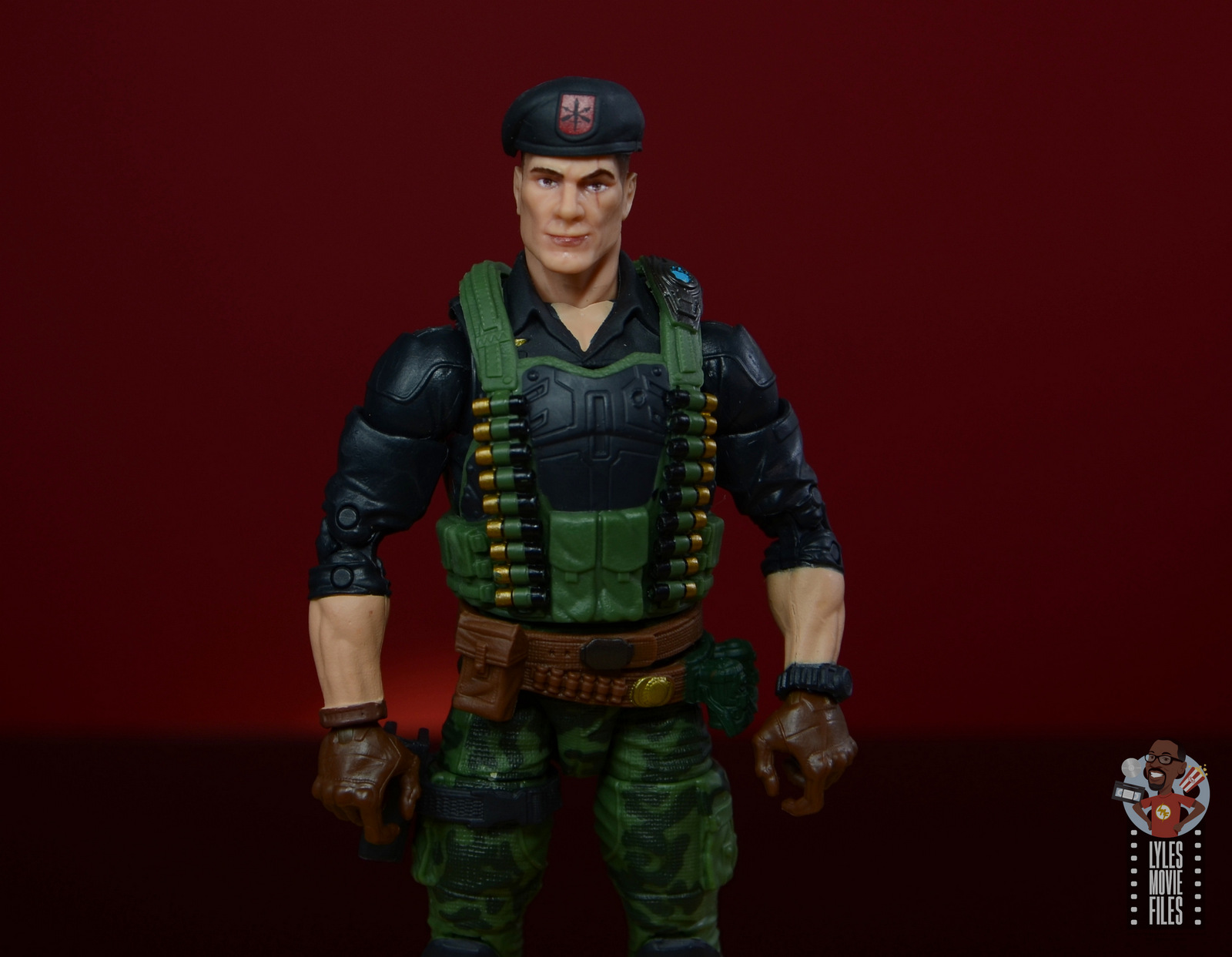 Paint:  Hasbro largely stuck with the trademark color scheme for Flint with just a few green accent points along the flak vest, pouches and top portion of the shotgun straps.

This is a very mild deviation from the design so I won’t complain since all the other important details like the brown gloves, black watch and legit camo pattern pants were intact.

I do wish the boots had the green and black color scheme as the original design instead of brown and black. 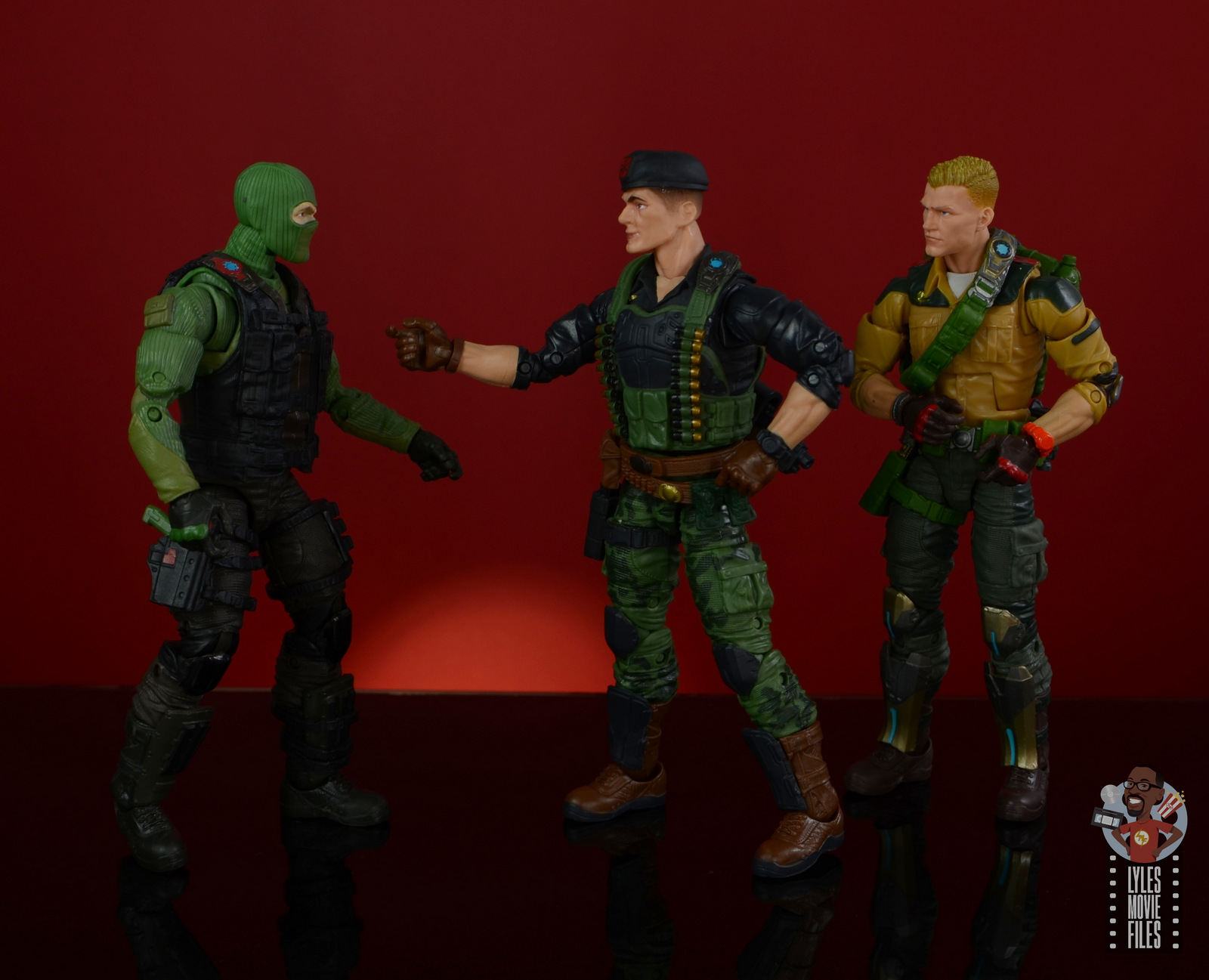 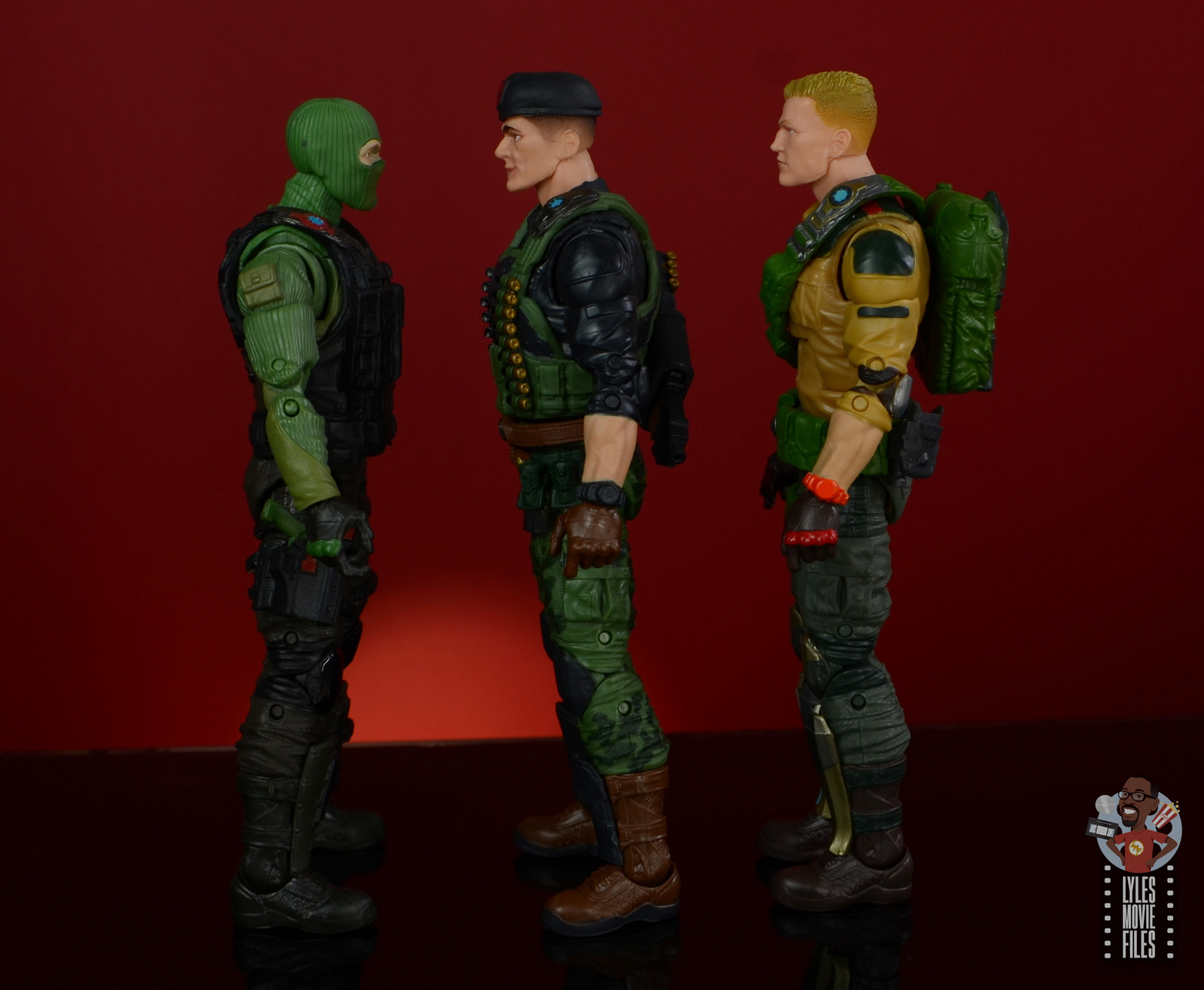 Articulation: The biggest downside to the flak jacket is it hinders the torso articulation to the point it’s useless. 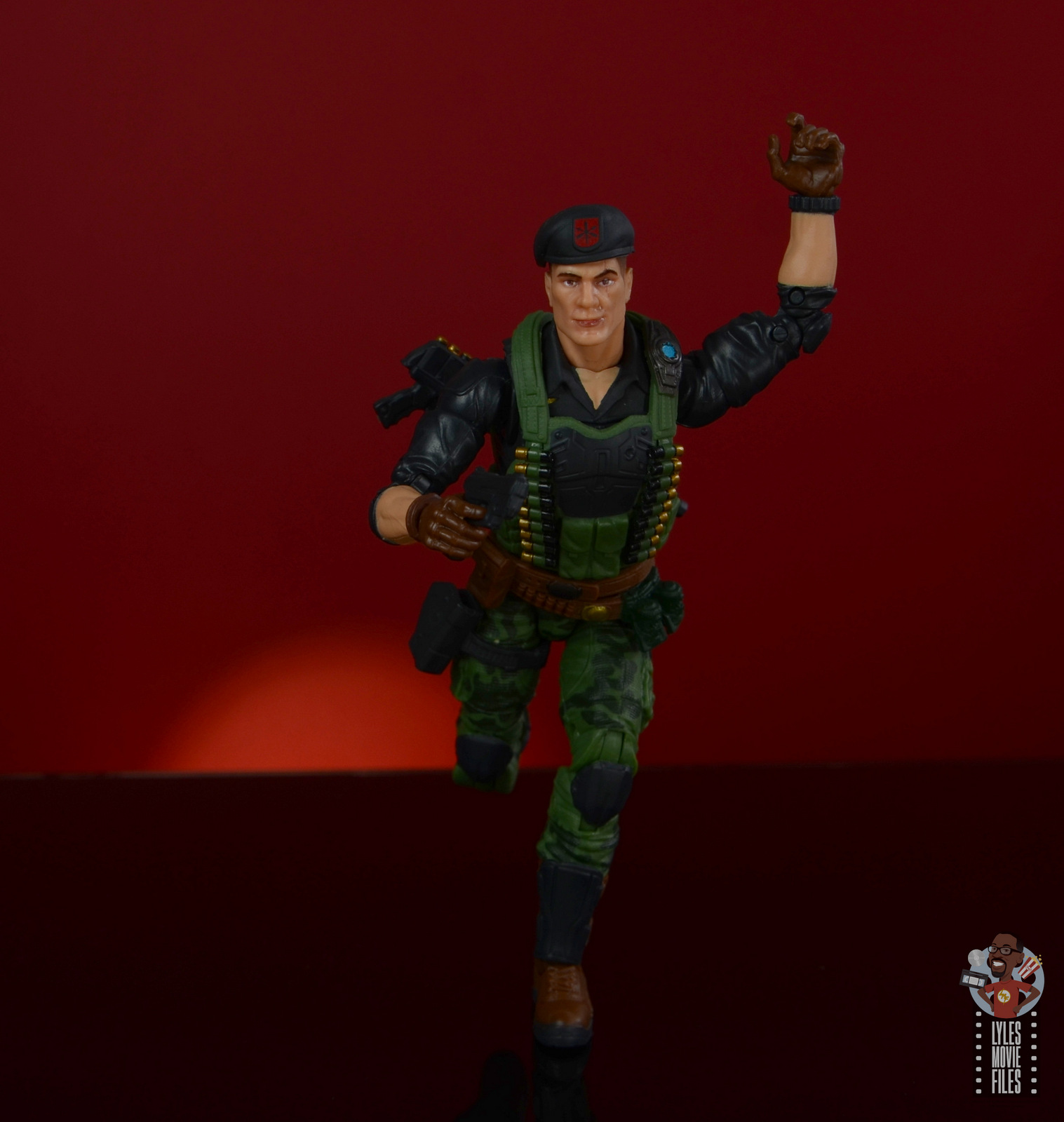 We’ve seen that with Roadblock and the Cobra Troopers and Vipers and the Joe design team is still trying to figure out the aesthetics of these vests while not restricting the torso joint so dramatically.

This does kind of make me wonder how difficult it would be to cut the flak vest away while leaving the straps and regain the torso articulation.

Otherwise, Flint features all the terrific articulation I’m expecting form this line now. That’s helped from the reuse of the Duke body, which is very well engineered and has nice, tight joints. 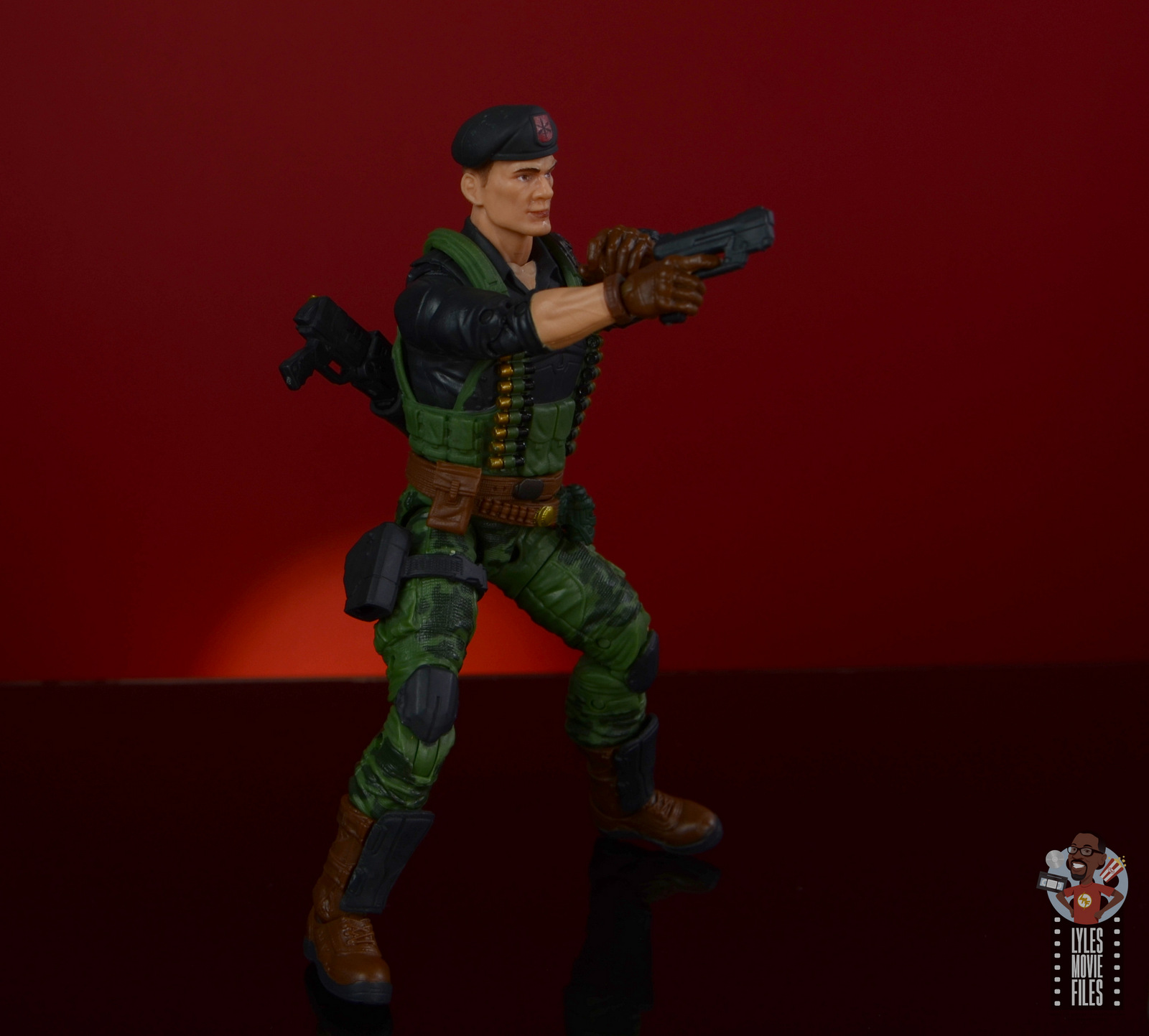 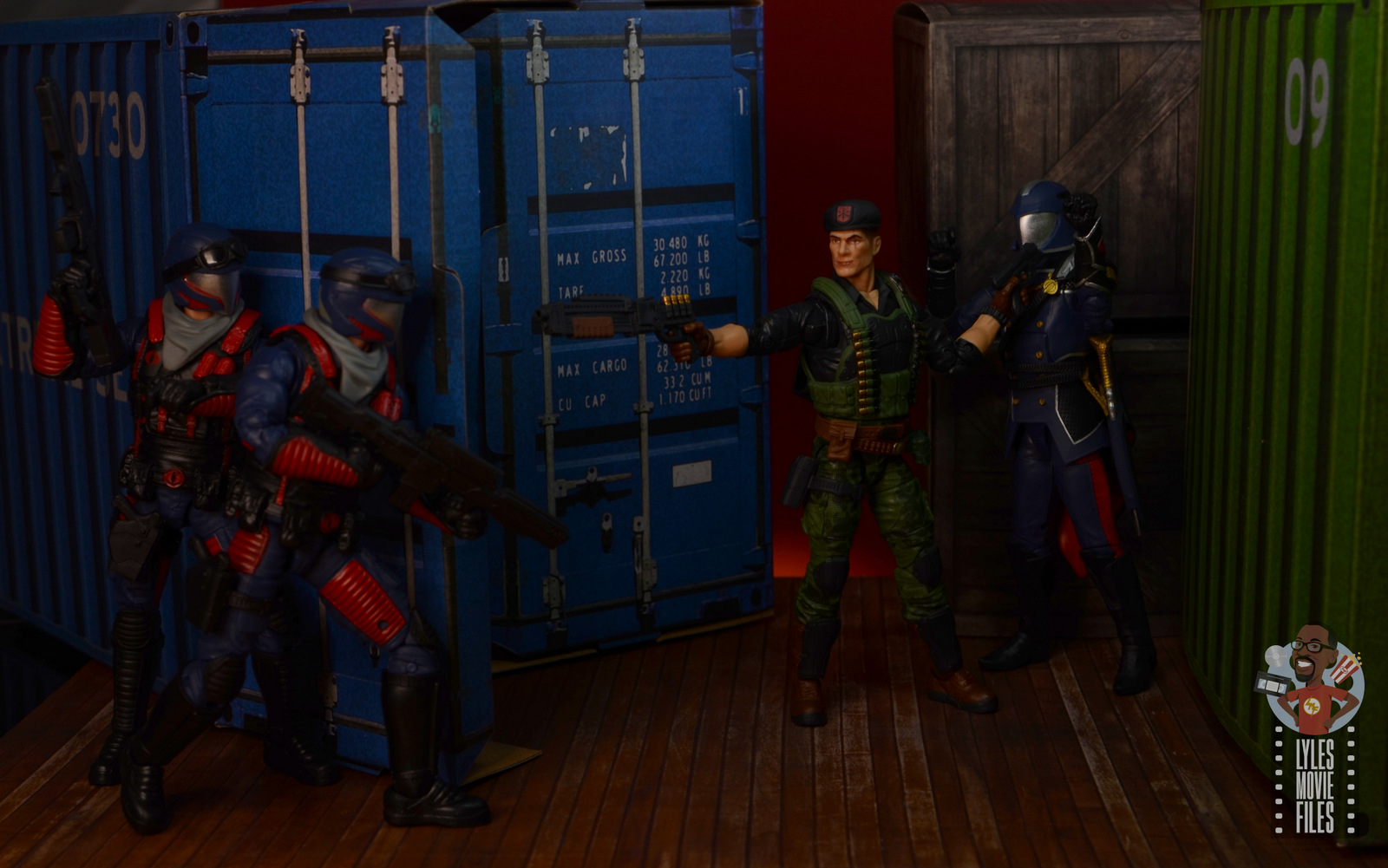 Accessories: Flint has most of his trademark accessories. The beret is removable in case you wanted to have him take it off for quieter dates with Lady Jaye. 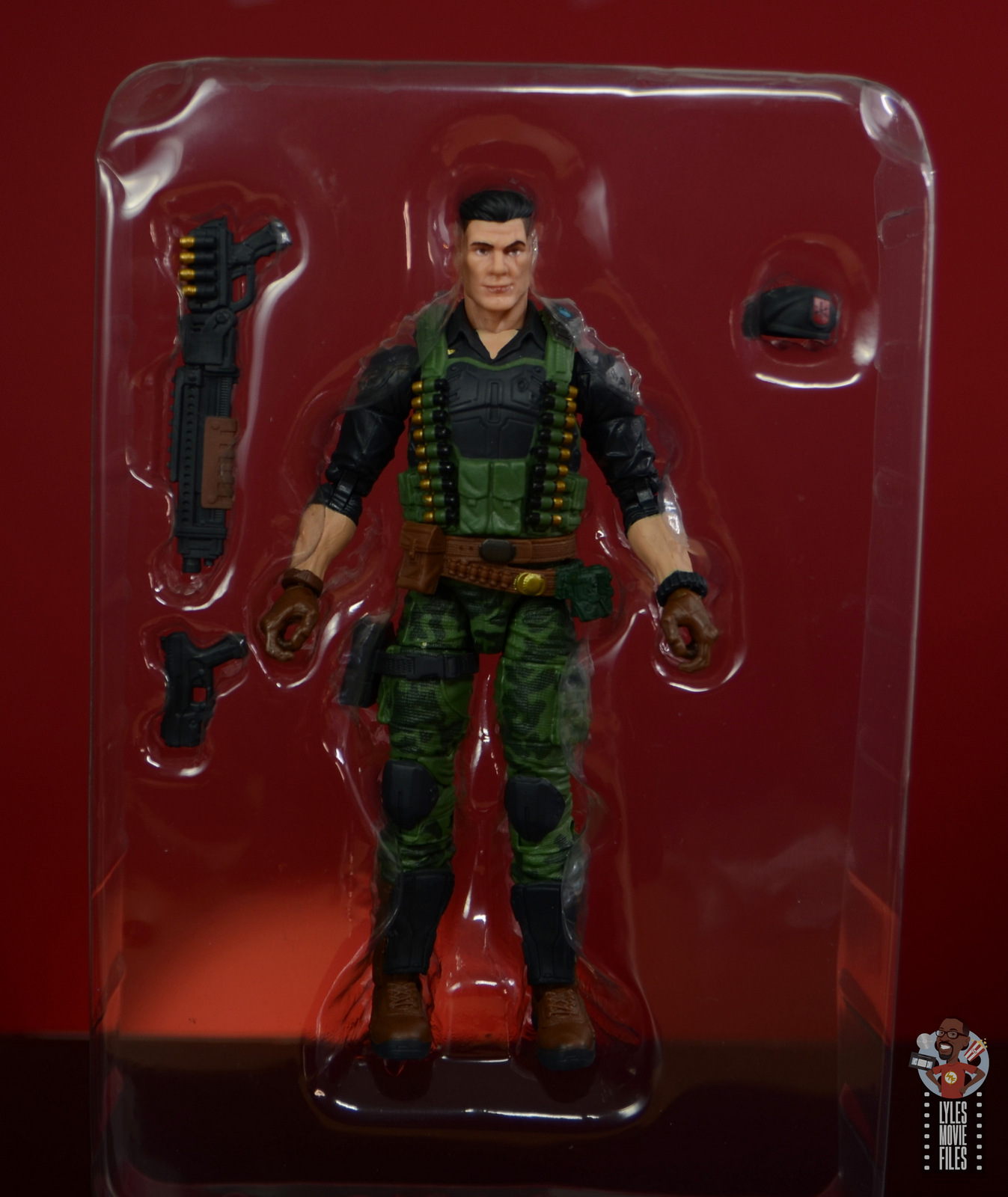 His main weapon is his trusty shotgun. This is a big departure from the pulse sci-fi weapons of the first wave. Still, the shotgun looks like it packs a nasty punch. It also has the cool additional feature of a pull down barrel so you can simulate Flint reloading. I like that touch. 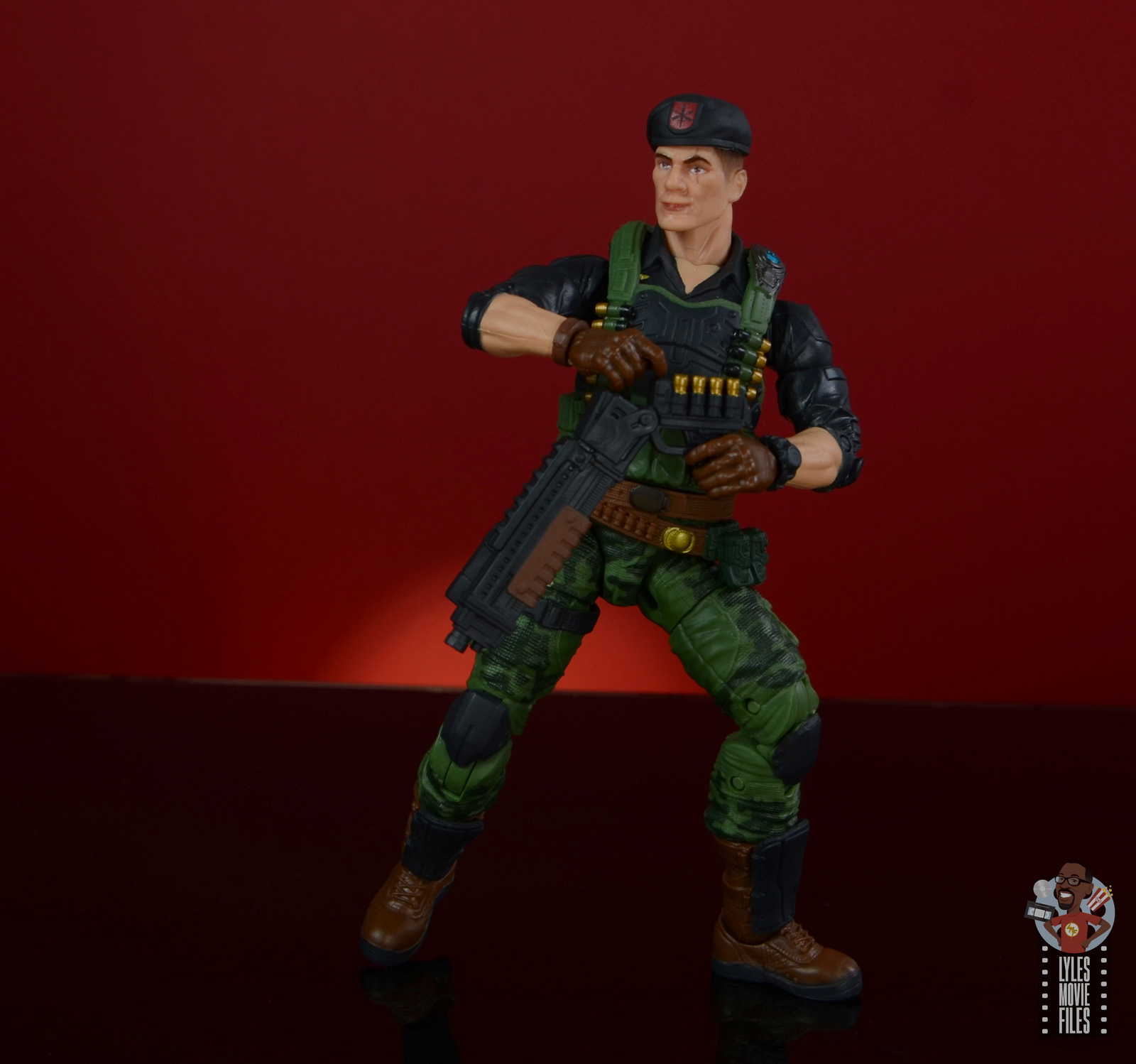 Finally he’s got the pistol to fit in the holster. This is the same one as Beach Head and it works just fine here as well.

I do wish Hasbro included his backpack to complete the full look. 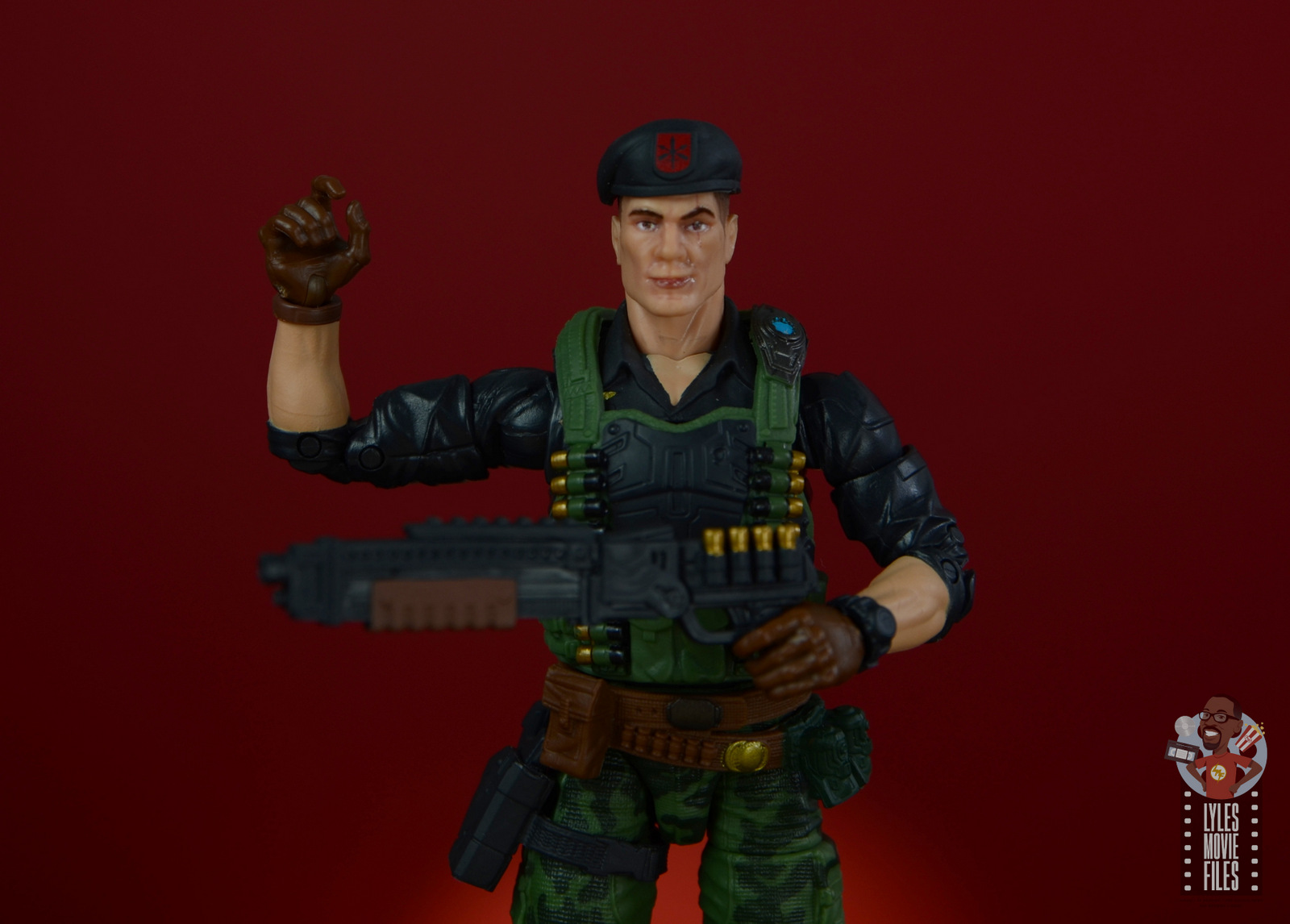 Worth It?  I got Flint for $20. He’s not a Target exclusive (thankfully) so you stand a decent chance of being able to get him without too much of a hassle.

Flint is really close. He’s got a great sculpt that’s a solid update of the classic attire. Adding the backpack and solving the flak vest limitations are all that’s missing. 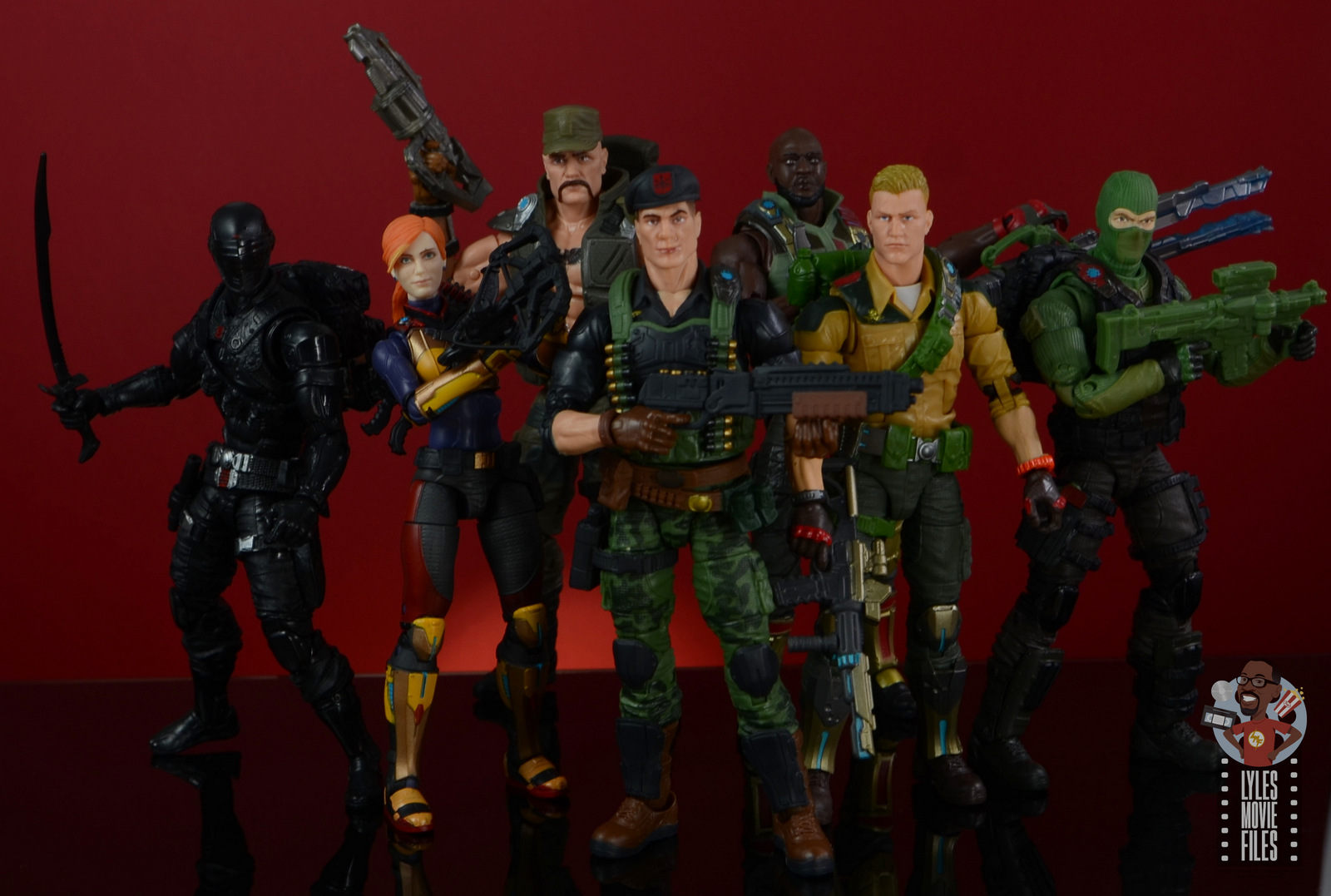 Where to Get It? I got him through Target.com, but he’s also available through Amazon and Entertainment Earth.