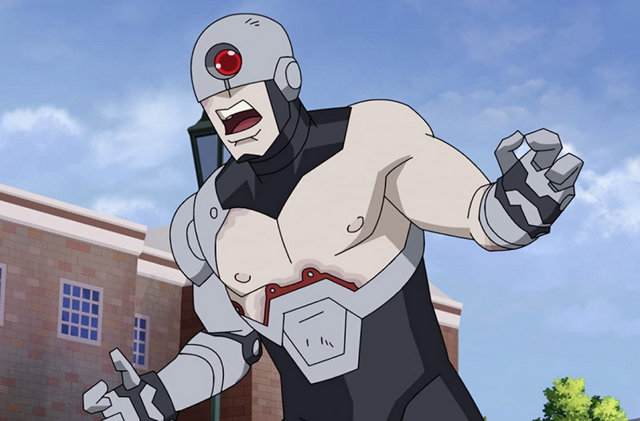 You Look Kinda Dead shows off Invincible’s already well-earned depth and the ease in which the comic series can shift genres while retaining its classic superhero feel.

Maybe that’s the series’ greatest strength. Invincible doesn’t revolutionize the genre, yet it feels fresh and unique. This episode again deftly navigates expectations while playing against conventional comic book norms for the better.

After last week’s brutally bloody conflict it was time to cool down…some. Mark managed to make good with Amber and they decided to join Mark’s best friend, William (Andrew Rannells), as he meets up with his college boyfriend, Rick (Jonathan Groff, Frozen).

William is the contractually obligated awesome best friend that makes every scene better as he’s so much fun. William might not break any new BFF ground, but he’s such a blast it doesn’t matter. If the series has done anything wrong it’s been limiting the Mark and William scenes.

In earlier episodes it felt like the writers were trying to do a bit too much with the cast and expanding Invincible’s circle too quickly. You Look Kinda Dead tightened that up by keeping the focus on four major plot points: the college road trip, Eve exploring her potential future, Robot’s concern for Monster Girl and Debbie’s growing suspicion of Nolan.

The latter has been a fascinating subplot. Debbie loves Nolan, but is finding dots a little too easy to connect. Having recovered Nolan’s costume, she has his tailor, Art (Mark Hamill), examine it to hopefully provide some answers.

You get the sense that deep down she already knows the answer, but wants to exhaust every reasonable option. This subplot is one that plays out better in the TV format as the subtle physical nuances have greater weight and impact than even the most effective panels.

It’s also fun watching Eve’s subplot play out. Unlike some of her peers, she didn’t need some life threatening incident to make her question her path as a superhero. Instead, she’s trying to help create the world she wants to live in by actually helping people rather than fighting bad guys.

As Mark starts to question what exactly he’s done to help anyone it’s a nice contrast to see Eve wanting and doing something beyond maintaining the status quo when super villains show up.

Of course the life of a superhero doesn’t end just because he’s on a college tour. This time Invincible faces off with a humanoid robots. A college campus is easy recruiting grounds for disposable easily missed lab rats.

It’s fun watching characters making their debut on the show and remembering how far writer Robert Kirkman will evolve their journeys over the course of the comic series. Add that as another reason why Amazon needs to announce the date for a second (and third) season pronto.

You Look Kinda Dead benefited from easing up on the brutality to focus more on the characters. The action is great, but reinforcing why these characters matter is even more important especially in the early episodes. That’s not to say the action we do get this episode is underwhelming.

Despite the title hero’s name, the impact of the battles looks painful and Mark registers the pain far more often than the usual shrug off everything immensely powered main character.

It’s crazy to think we’ve only got two more episodes left this season and that big showdown is still on the horizon. As always, You Look Kinda Dead has a post-credit scene that teases a big twist that likely won’t get paid off this season so yeah, we are gonna need that Season 2 announcement any day now.

Catch up on Invincible with Compendium Vol. 1 now on Amazon.