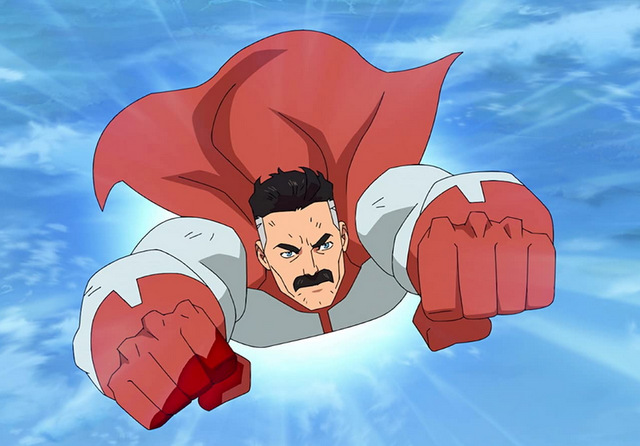 Invincible hasn’t had a bad episode so far yet We Need to Talk was easily the strongest of the series and sets a very high bar for the season finale. The spoiler embargo was chock full of all the juicy important parts of the episode so I figured an early review saying don’t miss this one was kind of pointless.

In a lot of ways, We Need to Talk felt like the ninth episode of a Game of Thrones season. With the usual 10 episode season the biggest, most important events tended to occur on episode nine instead of the season finale. There was definitely a sense that all of the subplots and storylines that have been patiently developed paid off here.

The episode title could have played out with the first scene as Debbie confronted Nolan again about killing the Guardians. In the comics it was so easy to just accept Omni-Man as this cruel, vicious supervillain, but J.K. Simmons has given Nolan a nuanced vulnerable side that wants to give him a chance to explain. He doesn’t and storms off while Cecil brings Debbie in with the hope of keeping her safe. This is a dubious strategy. So is his long-term strategy of getting Invincible to help fight Omni-Man.

Poor William has to suffer through the incredible tension with Amber and Mark. Amber isn’t having any of his apologies and still blows him off when he reveals he’s Invincible. The love interest rarely comes off well here as even if their point is justified they still come off selfish for wanting their significant other to spend time with them and not save the world.

Mark’s conversation with William was awesome as he rightfully calls Mark out for neglecting Amber and continually lying to her.

We get the payoff with Robot’s alliance with the Mauler Twins, the episode’s co-MVPs. Robot is actually just a drone controlled by a grossly deformed human. With the use of Rex’s DNA and the Mauler Twins’ clone expertise, Robot is able to create a new teenage body so he can better shoot his shot with Monster Girl.

Robot’s explanation to the Guardians allows for Rex to have some hilarious moments. Given the tone of this episode, the humor was much needed and appreciated. Thankfully the Maulers braced for Robot to betray them and had some insurance by resurrecting The Immortal.

Just as Nolan finished plowing through Cecil’s final defenses en route to Mark, including a satellite strike, the dead soldiers and a skyscraper sized kaiju, The Immortal enters the fray and he’s pissed.

At times, Invincible has been slightly indulgent with the violence and gore, but it felt justified this episode especially with The Immortal coming for some long overdue payback. But Omni-Man is no punk superhero/villain.

Throughout the episode, he brutally disposed of anyone in his path. The reaction shots from Cecil’s crew as they watch Nolan decimate everything was incredible. Watching Debbie’s reactions were even better as she witnessed the man she loved for so many years become a murderous, cold-blooded killer.

Mark is ready to pull an early Peter Parker and quit being Invincible after all the hardship it’s cost everyone around him. At least he’s got the good sense to go to Atom Eve for advice and counsel. The layered approach to this final fight was very well staged with Mark and Nolan teaming up to fight the kaiju, then The Immortal comes in to disrupt everything.

The Immortal/Omni-Man was a slugfest and while Nolan had already gone through a gauntlet, he was still able to overcome Immortal and dismember him in front of the world…and Mark. The episode closes out in the same manner as the comic’s big reveal with Nolan saying “Mark, we need to talk.”

This was a spectacularly entertaining episode with so many layers of broken trust, legit laugh out loud humor and some appropriately devastating action. The season finale is going to have some work to top this, but this was an impressive and memorable setup for an epic conclusion.