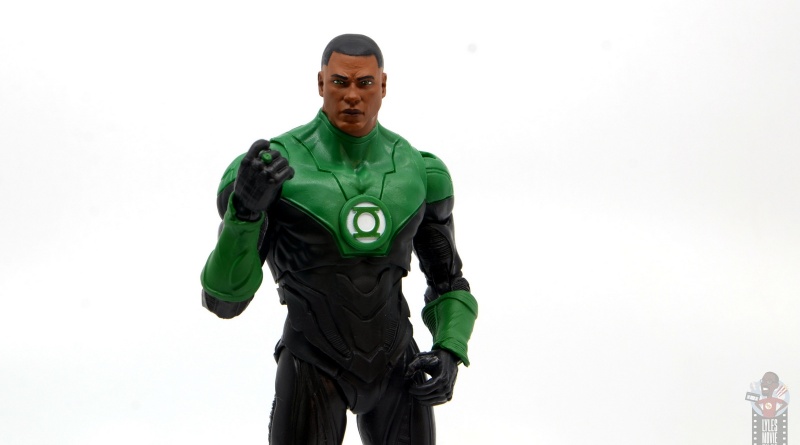 I’m not sure how much longer I’ll be invested in the McFarlane Toys DC Multiverse line, but I definitely had to get the Green Lantern John Stewart figure.

The Robin figure really soured me on the line in terms of functional and useful articulation and in 2021, I need my figures to have more in the plus column than looking cool.

Having said all that, my curiosity was piqued with the Green Lantern John Stewart shown. If nothing else I wanted my McFarlane Toys collection to have at least one black hero in the mix — looking at you DC Essentials.

There’s no pressure here, but maybe John Stewart will prove the light to keep me in the line. Let’s see…

Packaging: I appreciate how Mattel will switch up packaging for its WWE Elite like every other year. Even if I’m not a fan of one setup I know it won’t be the case long term. I wish McFarlane Toys would adopt a similar strategy.

This package is the least inspired of any line I collect regularly. At least I don’t have to worry about storing it after freeing the figure.

The back features a cover image of the figure inspiration as the figure typically has some significant differences from the comic version. 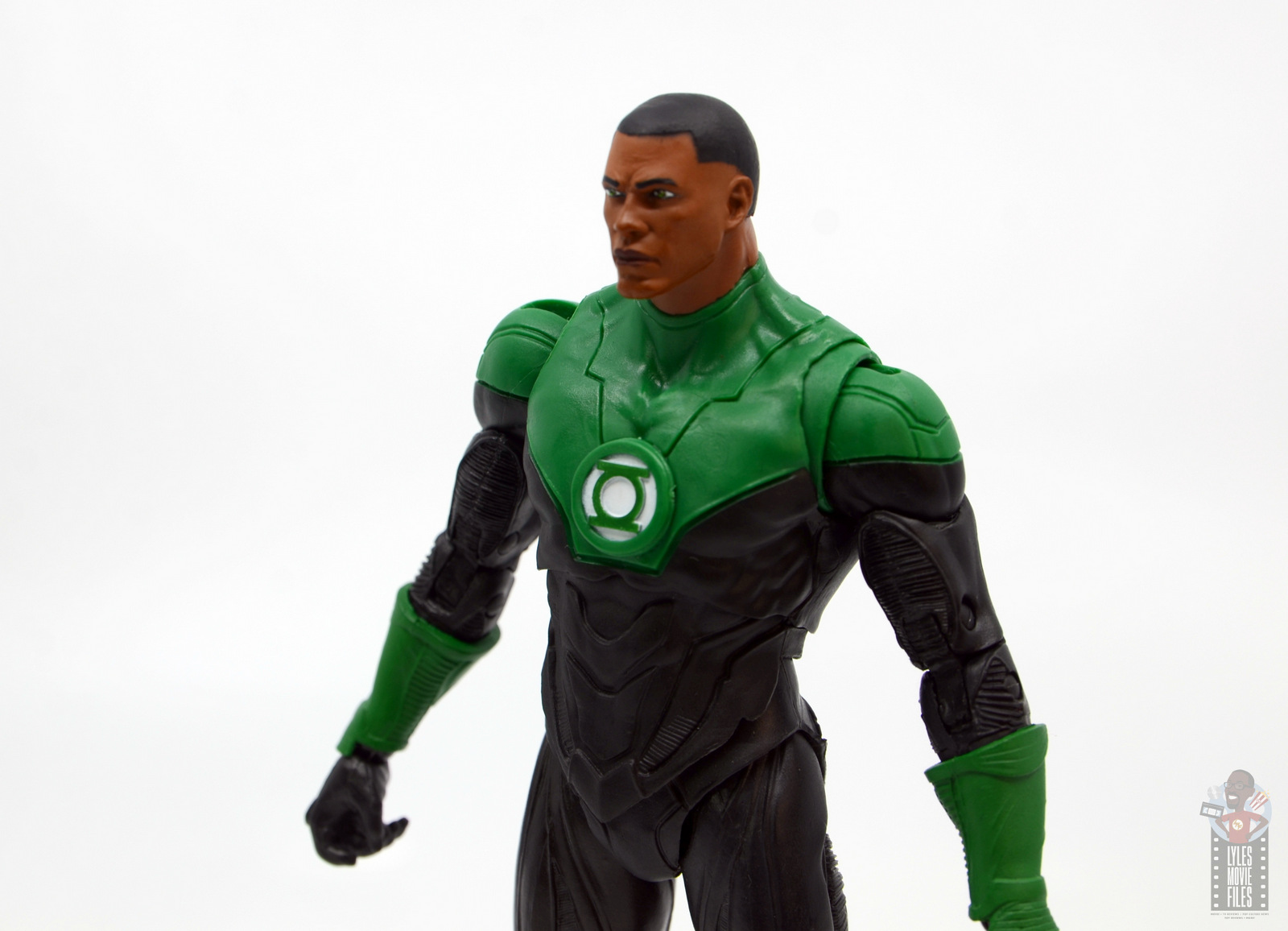 Likeness: McFarlane didn’t want to do the basic Green Lantern costume and liked the crew at Mezco Toyz has injected his own little flair to the outfit. The costume now has a number of paneling and random patterns that seem just like a modern movie busy for the sake of being busy aesthetic. 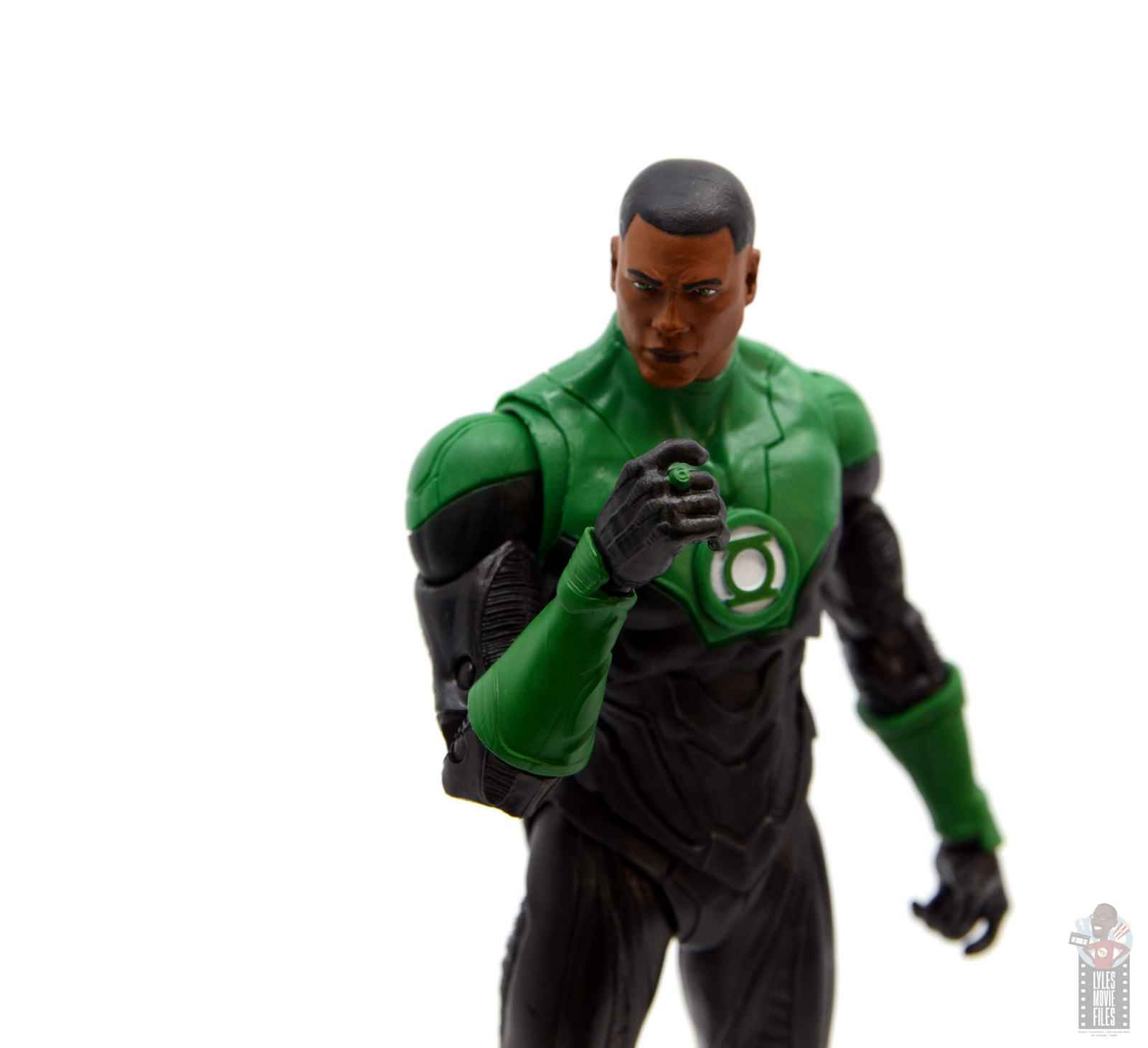 Like a movie figure, this helps give the outfit some level of depth and detail that’s not necessary in a comic book. I guess I don’t hate it (?) even if I’d prefer a little less of the paneling and patterns. 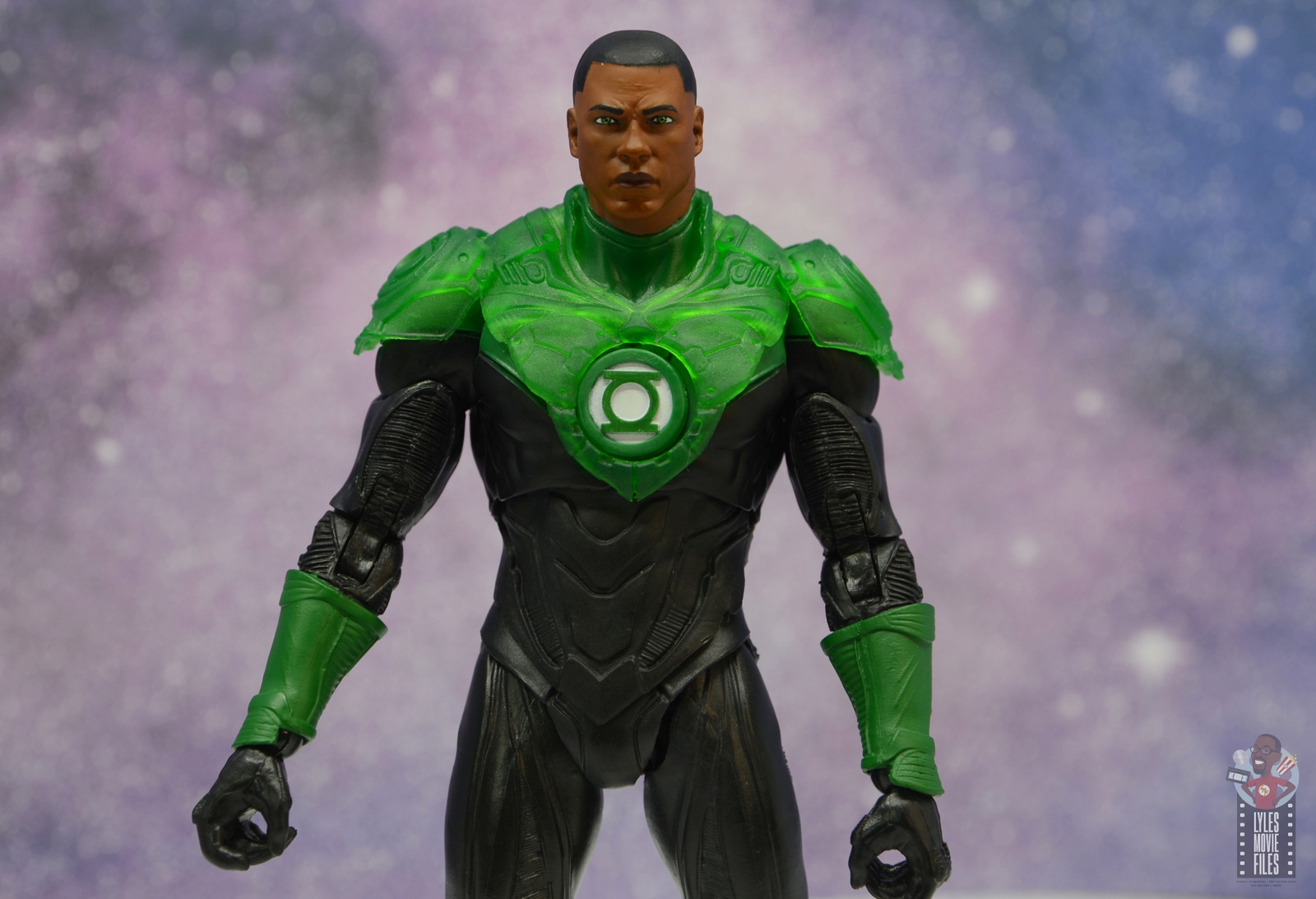 My favorite aspect of the figure is the head sculpt, which is one of the best we’ve gotten from the line so far. It captures John Stewart’s focused nature without being overly stern or angry looking. 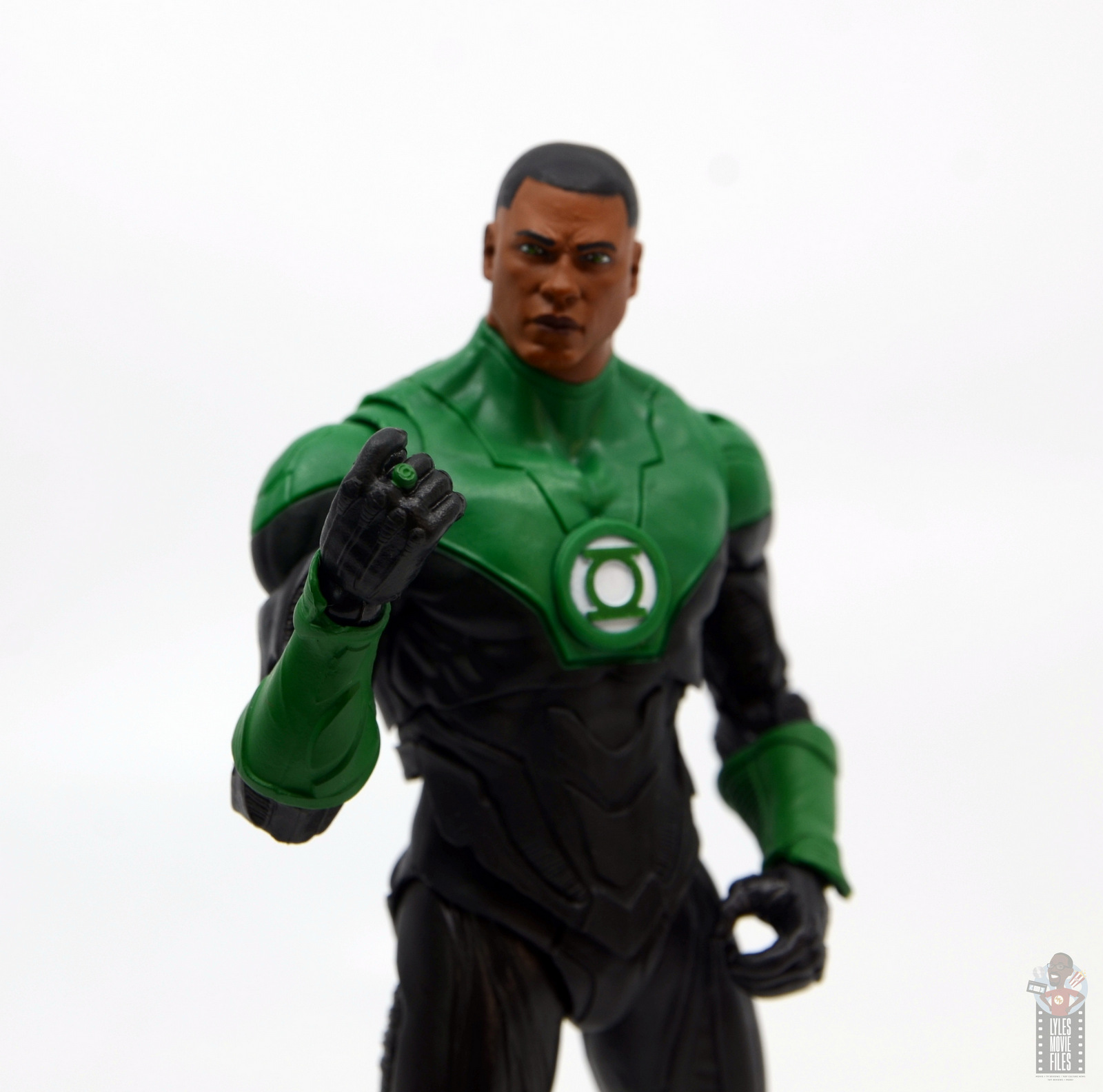 Want to see a stern John Stewart? Check out the NECA version. This one looks heroic without looking bored.

The sculpting team at McFarlane Toys doesn’t seem fully set on a style just yet. Both Flash and Batman look a little too animated while Superman and Green Lantern have realistic looking head sculpts. 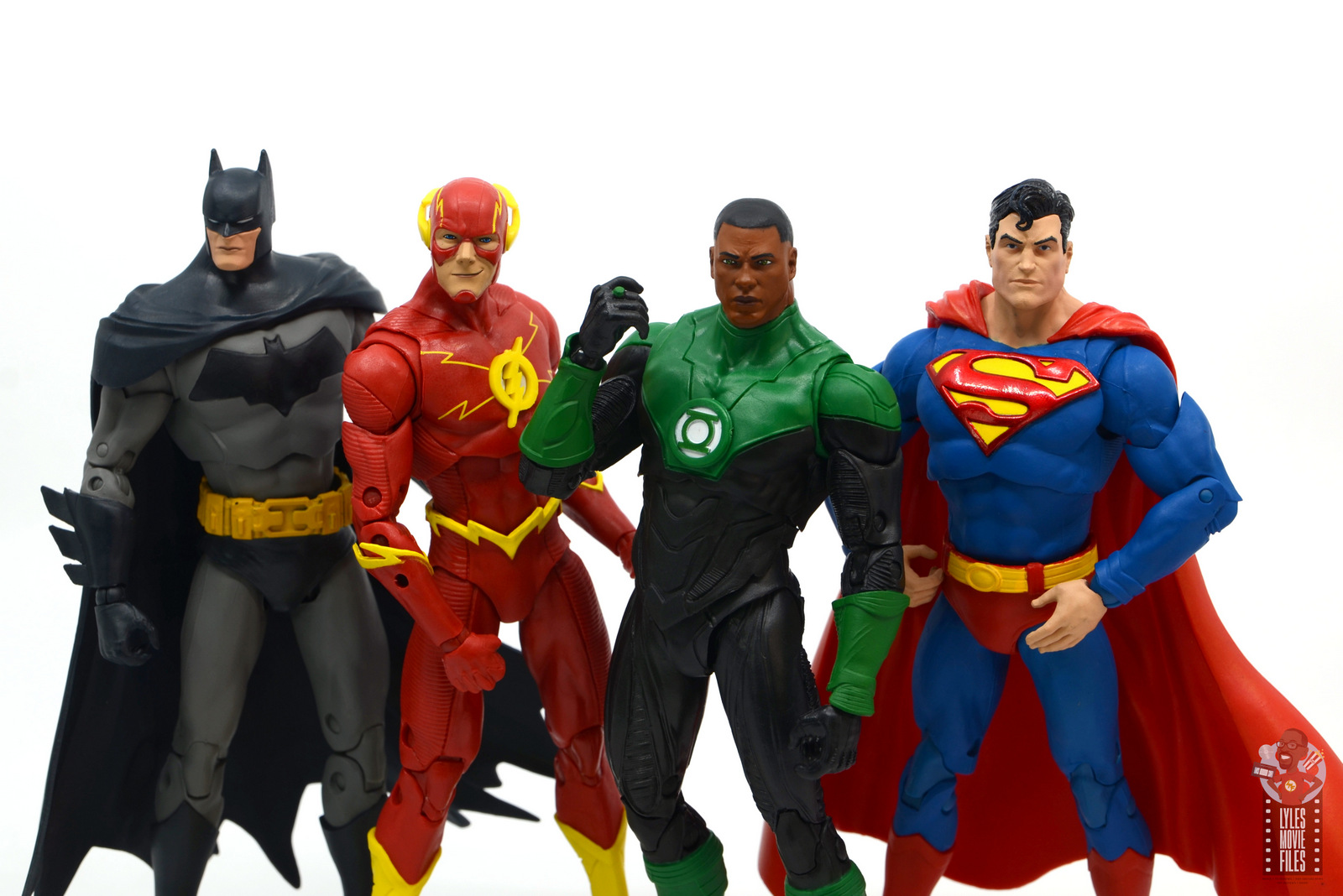 The torso looks a little too thick and gives John a bit of a football player build instead of that of an architect/former soldier. I wonder if all the overlays with the patterns and panels on the outfit required a thicker body? 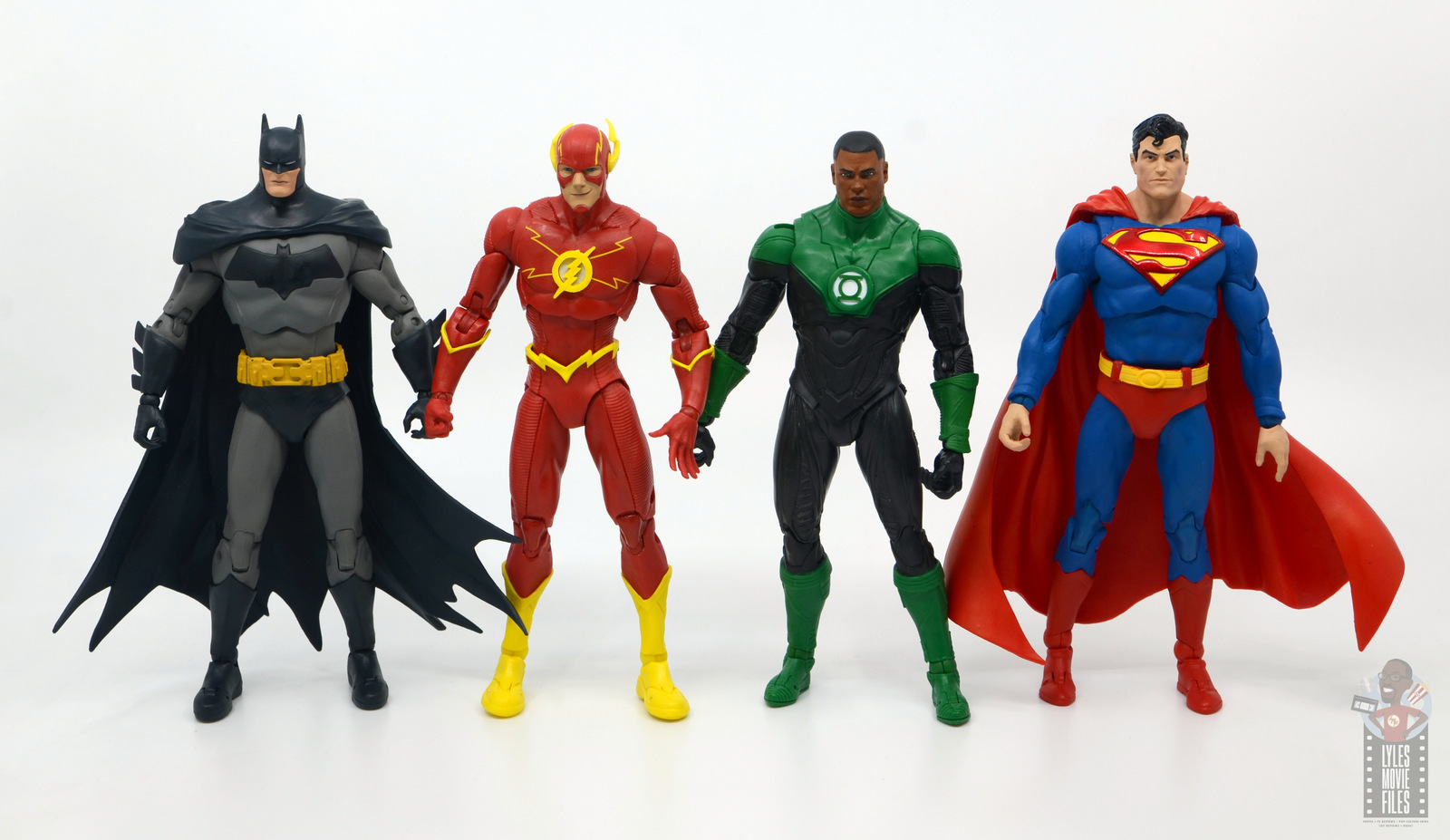 Scale: John Stewart is average height and outside of a few early in the line scale issues, everyone is basically the same height. Just based on his style and head sculpt, he fits in much better in a Justice League with the Action Comics #1000 Superman figure than the Batman or The Flash figures. 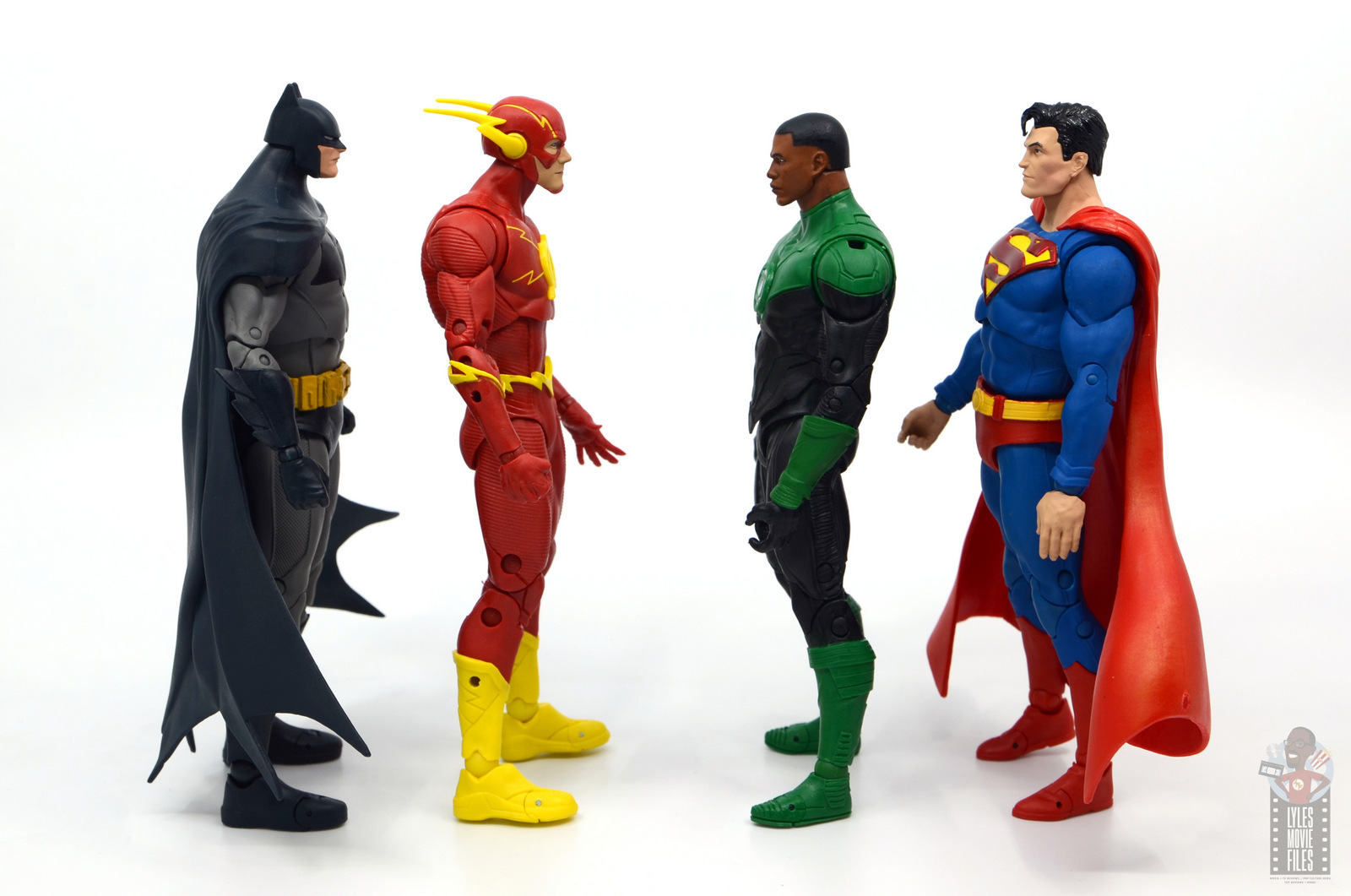 Paint:  I haven’t had many issues with paint problems with this line. Everything is mostly clean on John Stewart with the exception of his hairline, which has some black coming down, and some of the green bleeding into the white of the logo.

There’s also a few random fades of green onto black, but it’s the kind of paint issue you have to look for instead of noticing because it’s so obvious.

I’m paying more attention to this lately as some companies struggle on this end, but McFarlane really did a nice job on John’s skin tone. 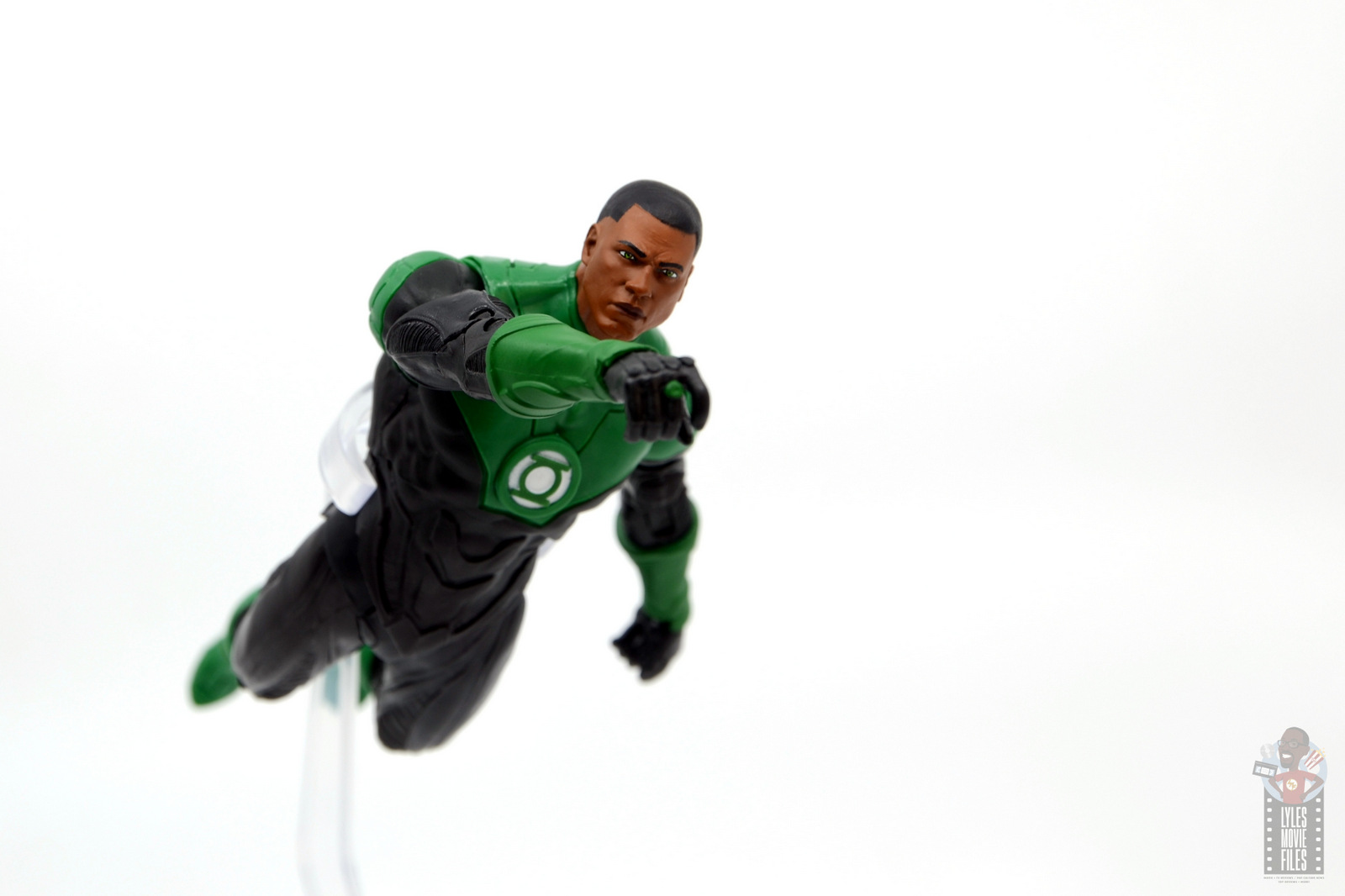 Articulation: John Stewart has better articulation than Robin. I could stop there, but it’s crazy to me how much smoother GL is to pose and to come up with some interesting angles to shoot him than Robin. 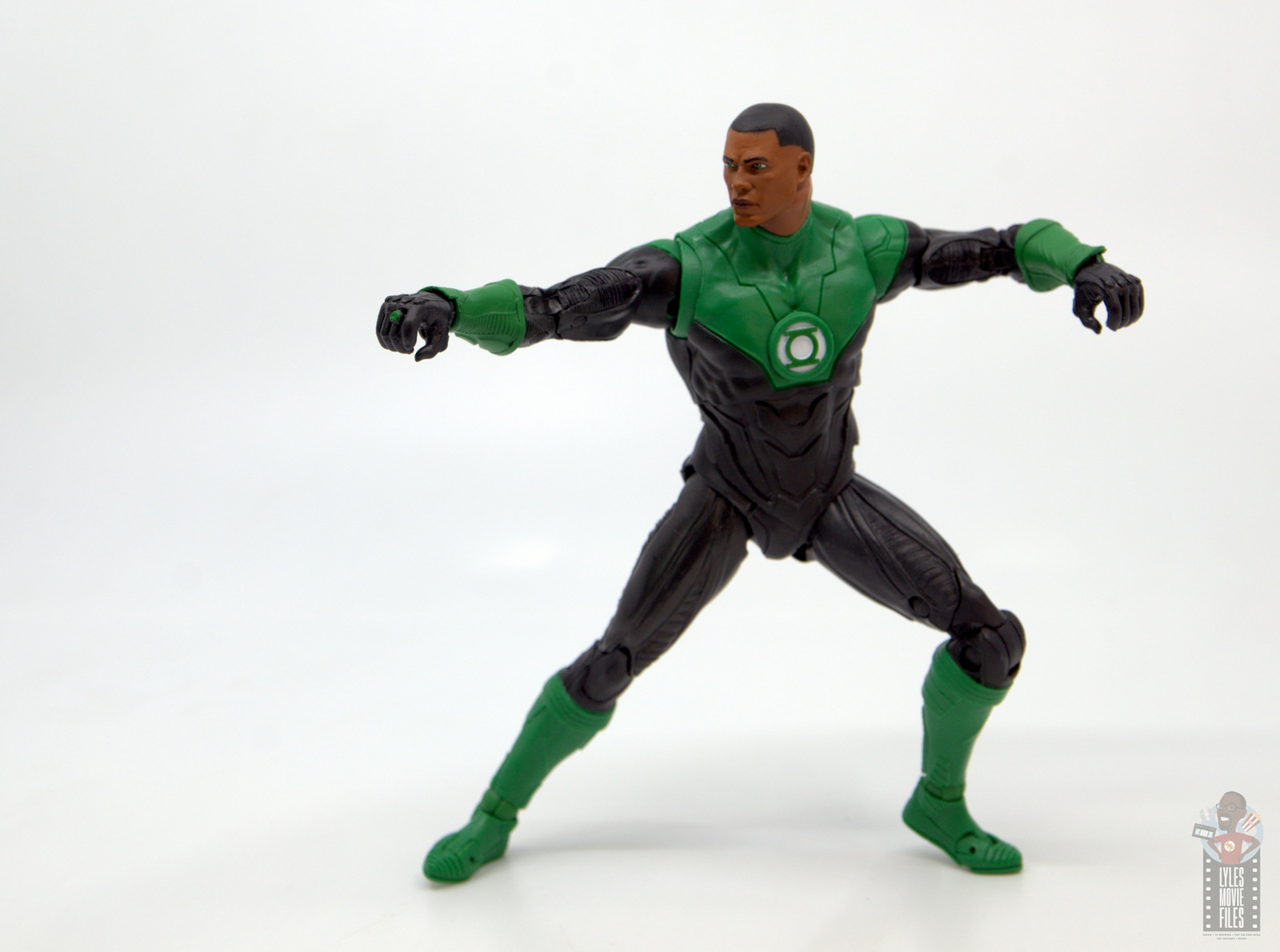 Whether aiming the power ring, flying or getting ready to run strategy sessions for the Corps or Justice League, John Stewart can handle it. 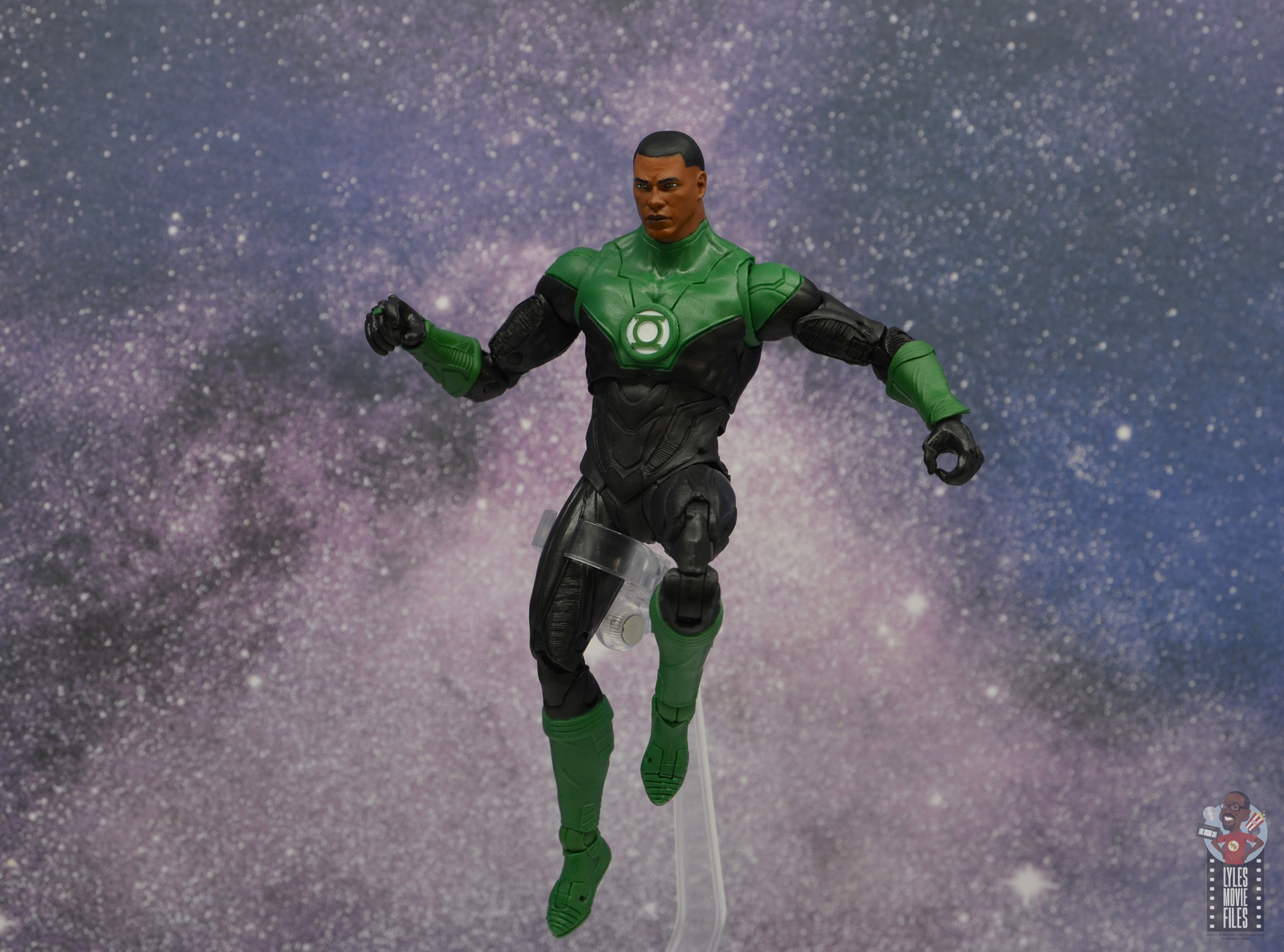 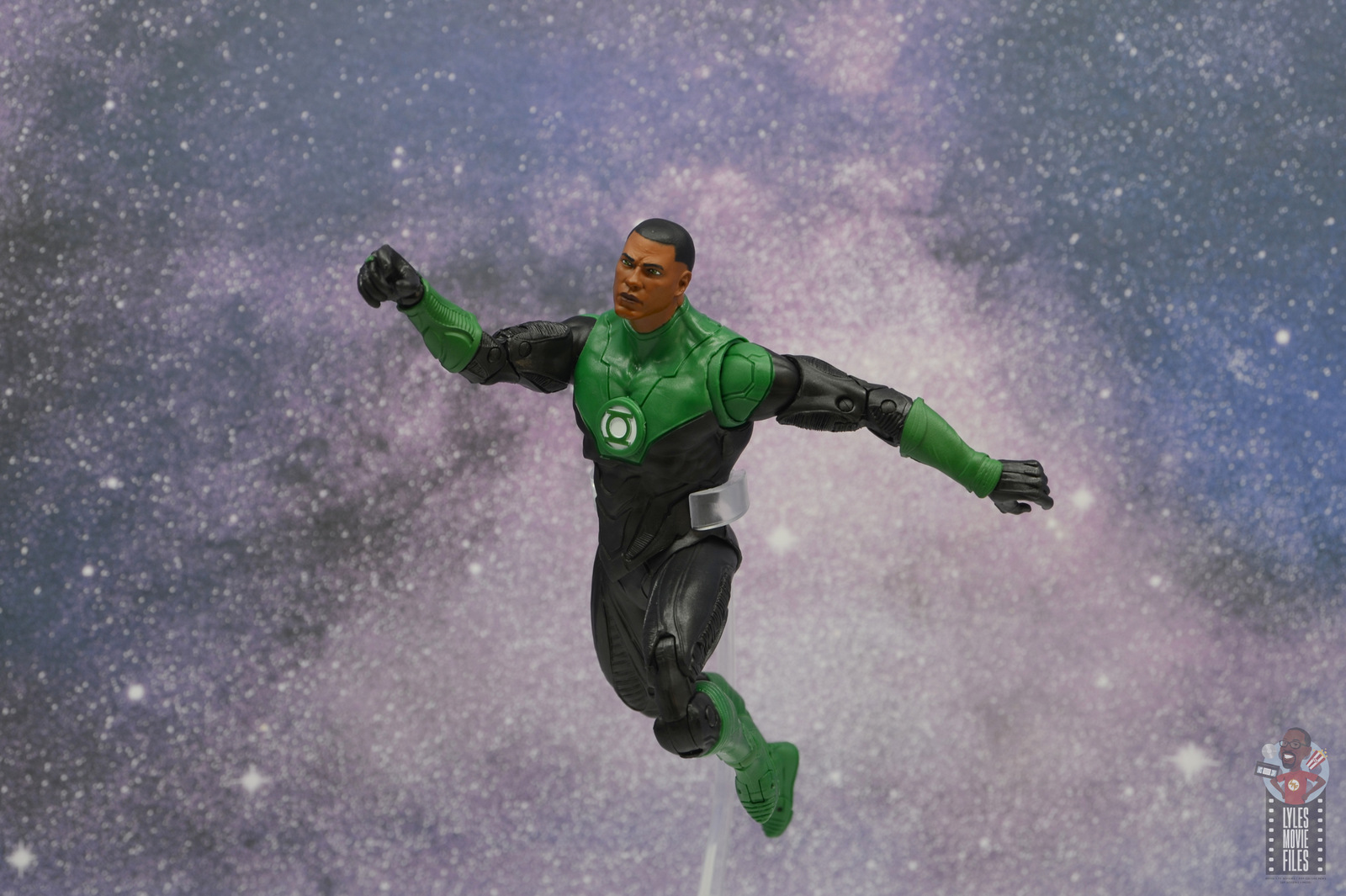 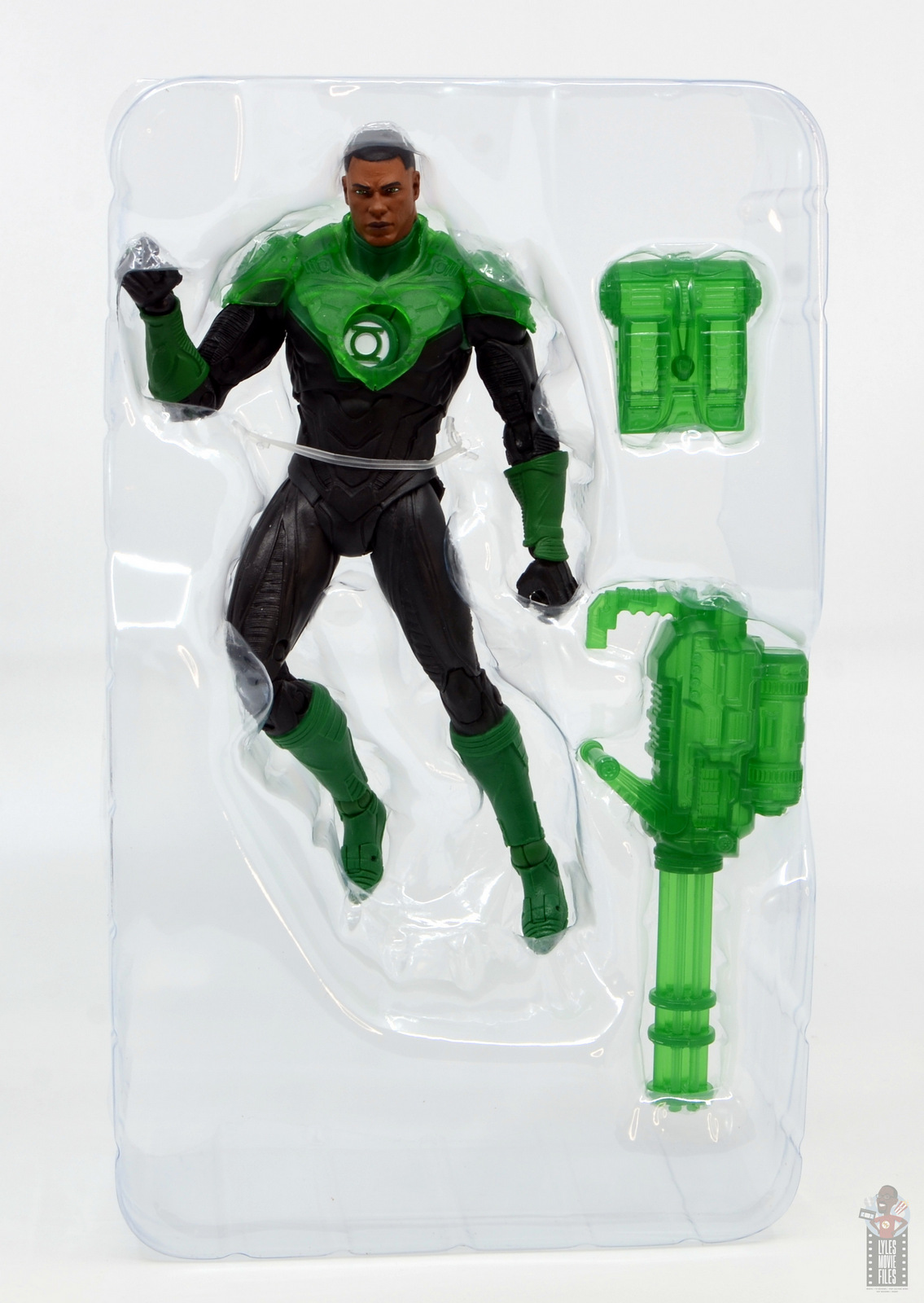 He’s got an armor shell that fits over his shoulders and half of his torso. 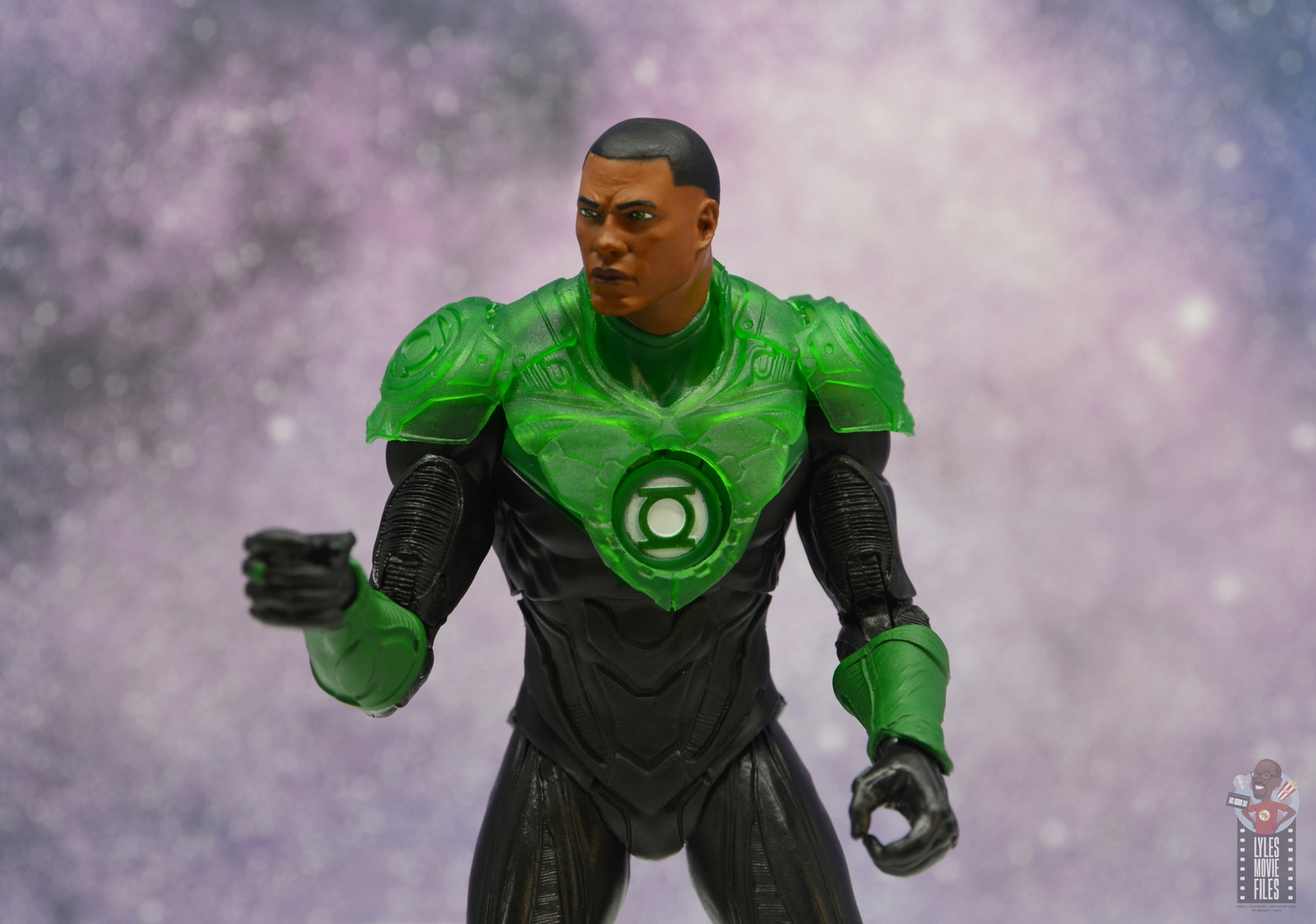 There’s also a backpack and a Gatling gun. All three accessories are done in a translucent material to convey the Lantern construct visual and are crammed with a ton of detail. 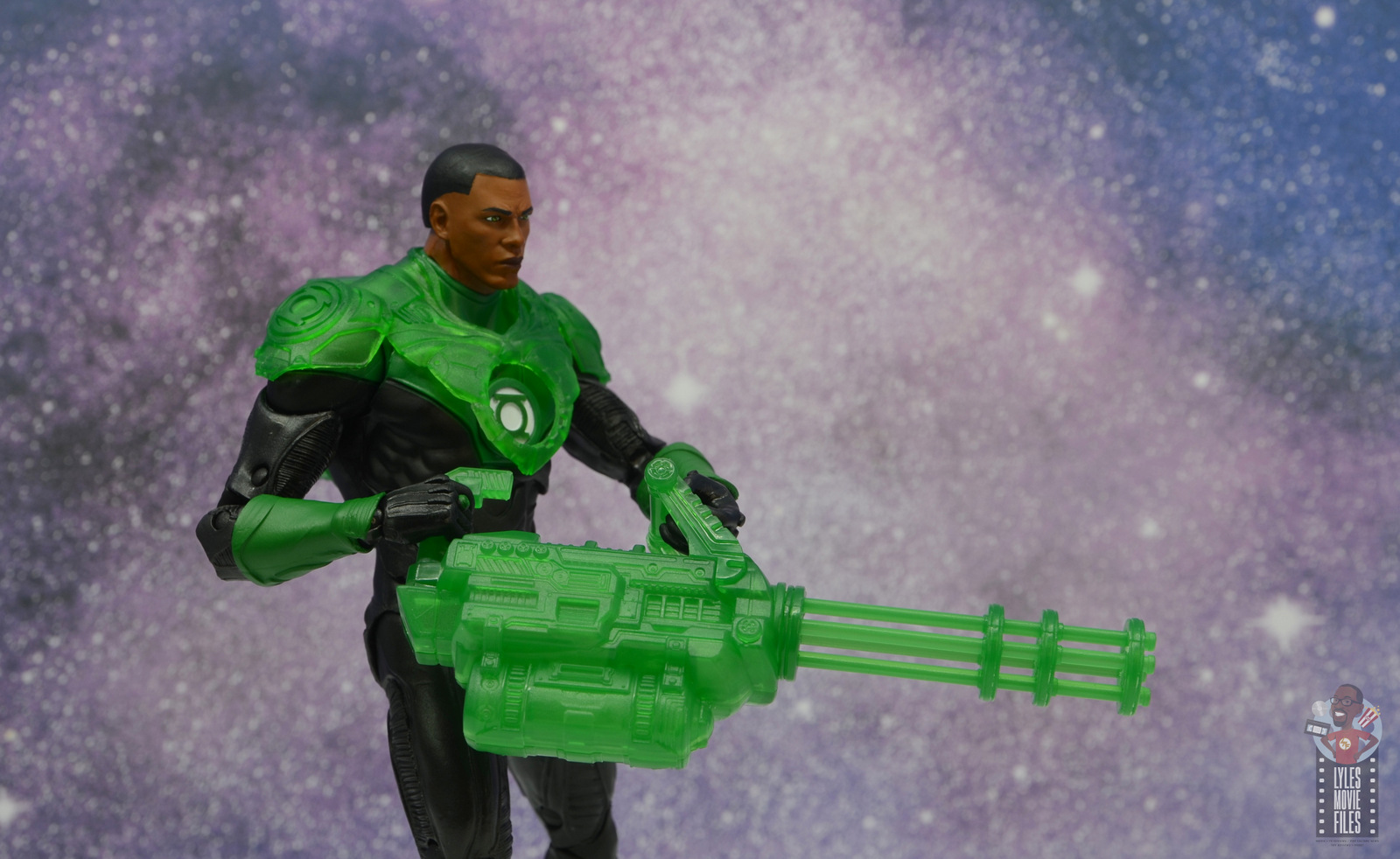 I don’t know how necessary the backpack was and would have preferred another construct piece like a blast effect.

Additionally, Green Lantern comes with a flat black stand. This is definitely a case where a flying stand would have been better. Finally, he’s got the standard DC Multiverse card.

Worth it? McFarlane Toys hasn’t wavered with the $20 price tag, which is impressive considering the various scales and detail provided. 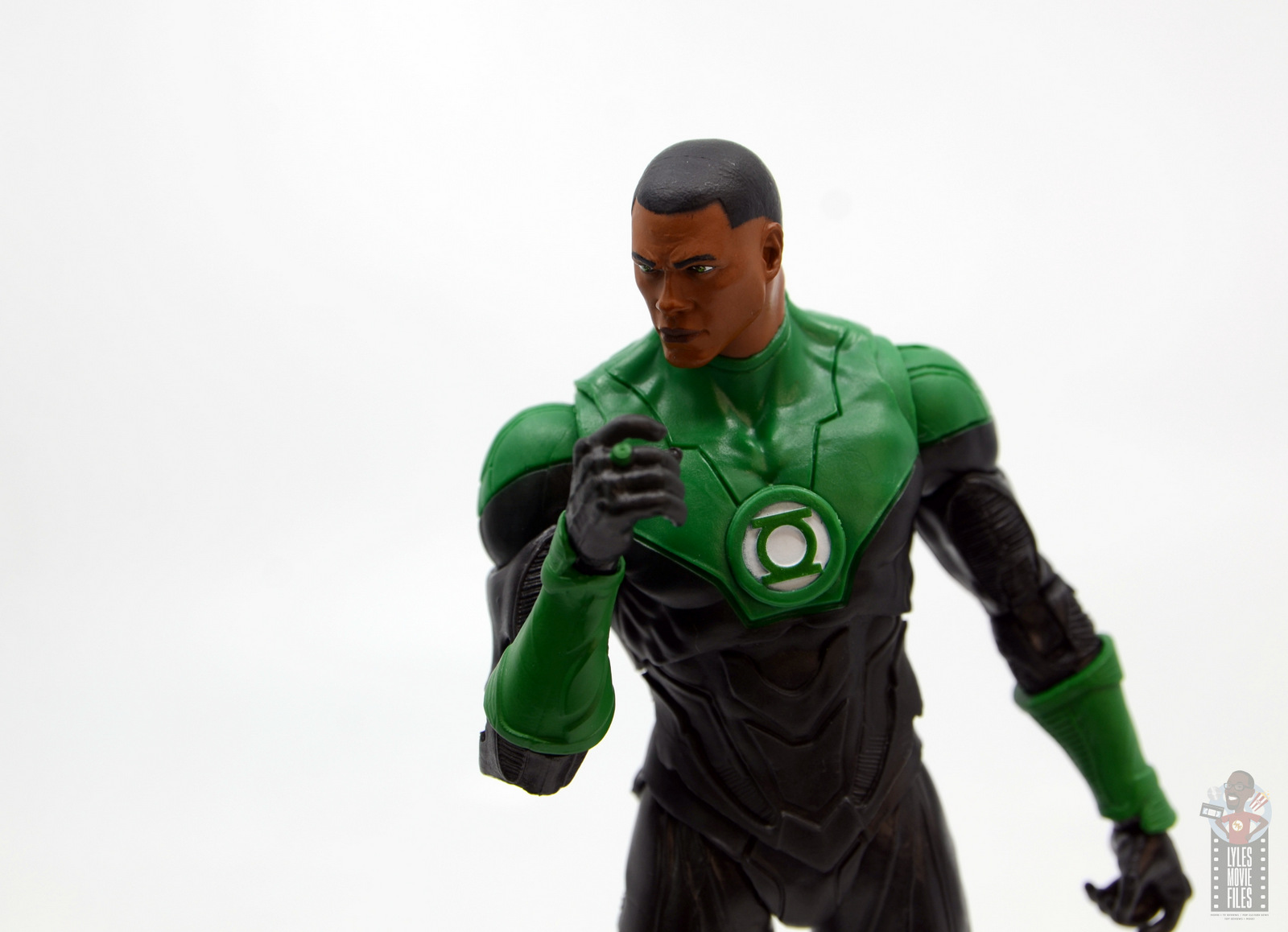 The costume design elements are definitely a choice and while I wish he had different accessories especially a flight stand, this is one of the best offerings in this DC Multiverse line so far. 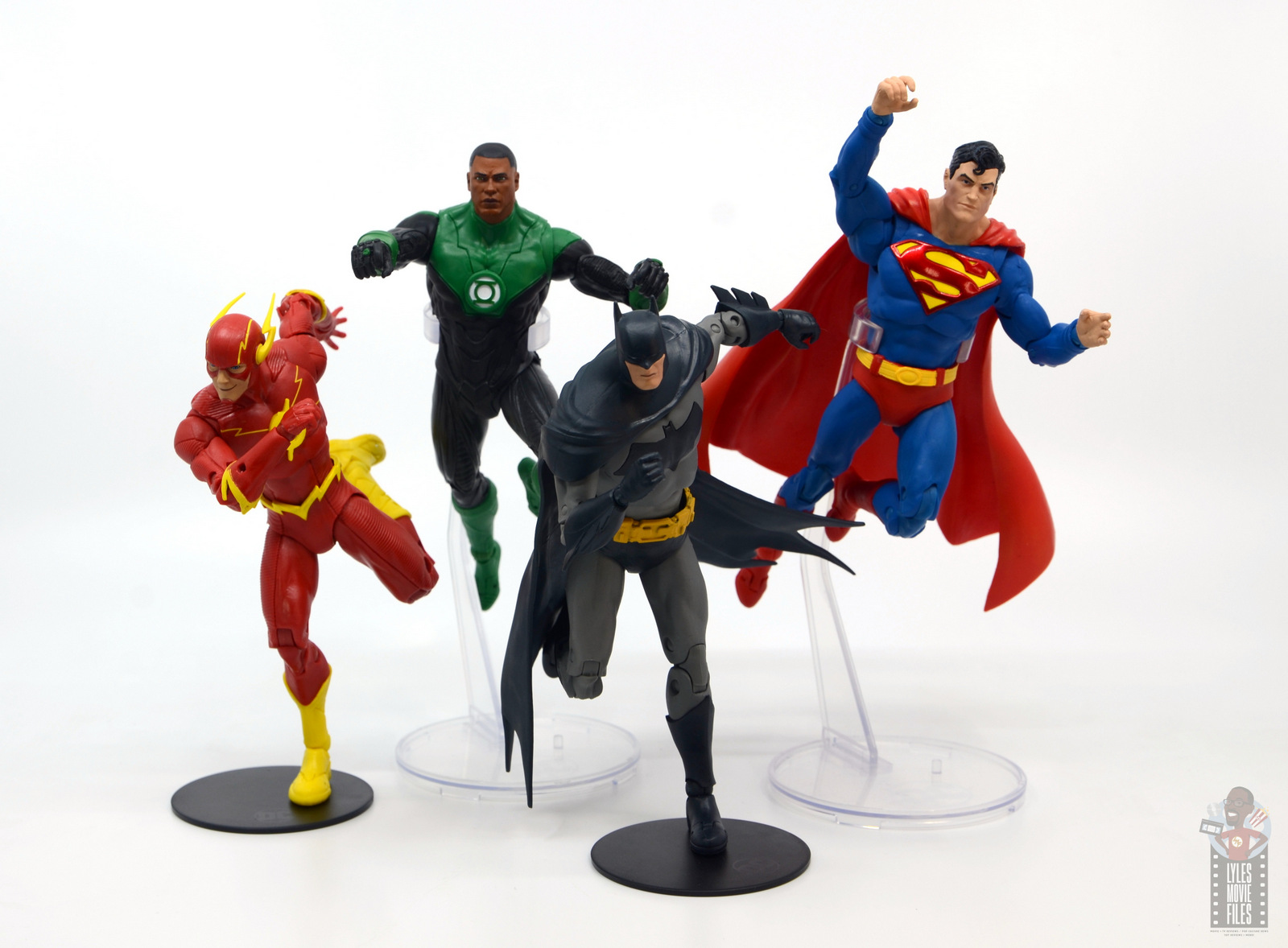 Where to get it?  Everyone is getting this line from Target, Wal-Mart and GameStop. I got my John Stewart from Target, but you can also go online and grab him from Amazon and Entertainment Earth.