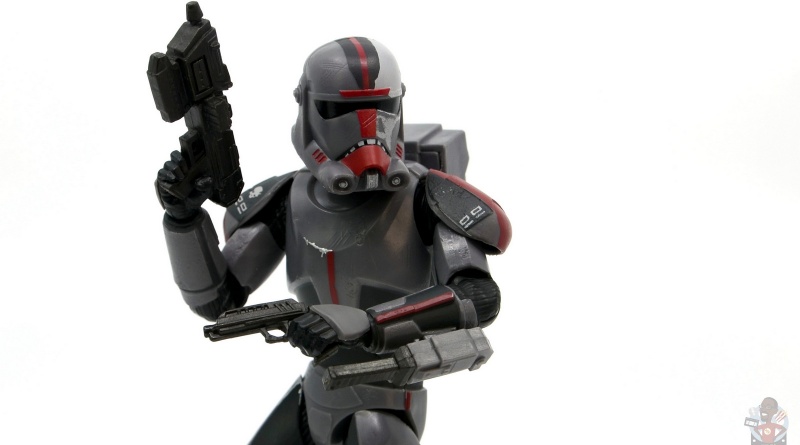 True story. After the first episode of Clone Wars’ final season last year, I texted my brother and told him I’m gonna need Star Wars The Black Series figures of all of The Bad Batch. Today, I’m checking out Hunter, the first member of the group I was able to find on pegs. Crosshair is in my figure collecting crosshairs though so hopefully Hunter won’t be alone for long.

The Bad Batch looks poised to be yet another breakout fan favorite from Clone Wars and I’m anticipating that these guys will be tricky to find on pegs as a result too. Let’s see if Hunter gets the batch off on a good start.

Packaging: Whoever came up with the idea for the SWB redesign needs a raise or at least a snazzy backdrop for the Zoom calls. The Bad Batch gets their dark red color scheme as the package accent color. 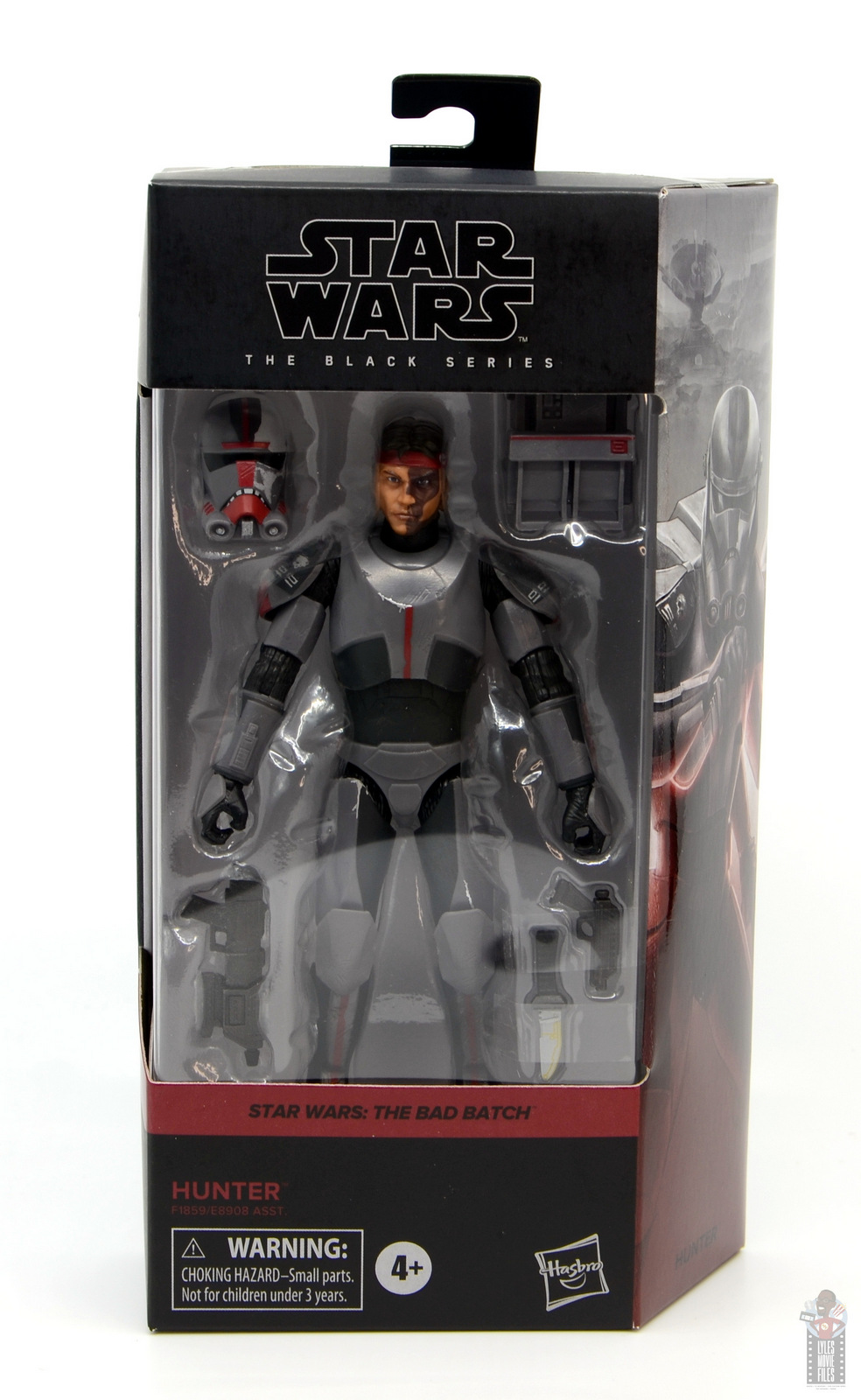 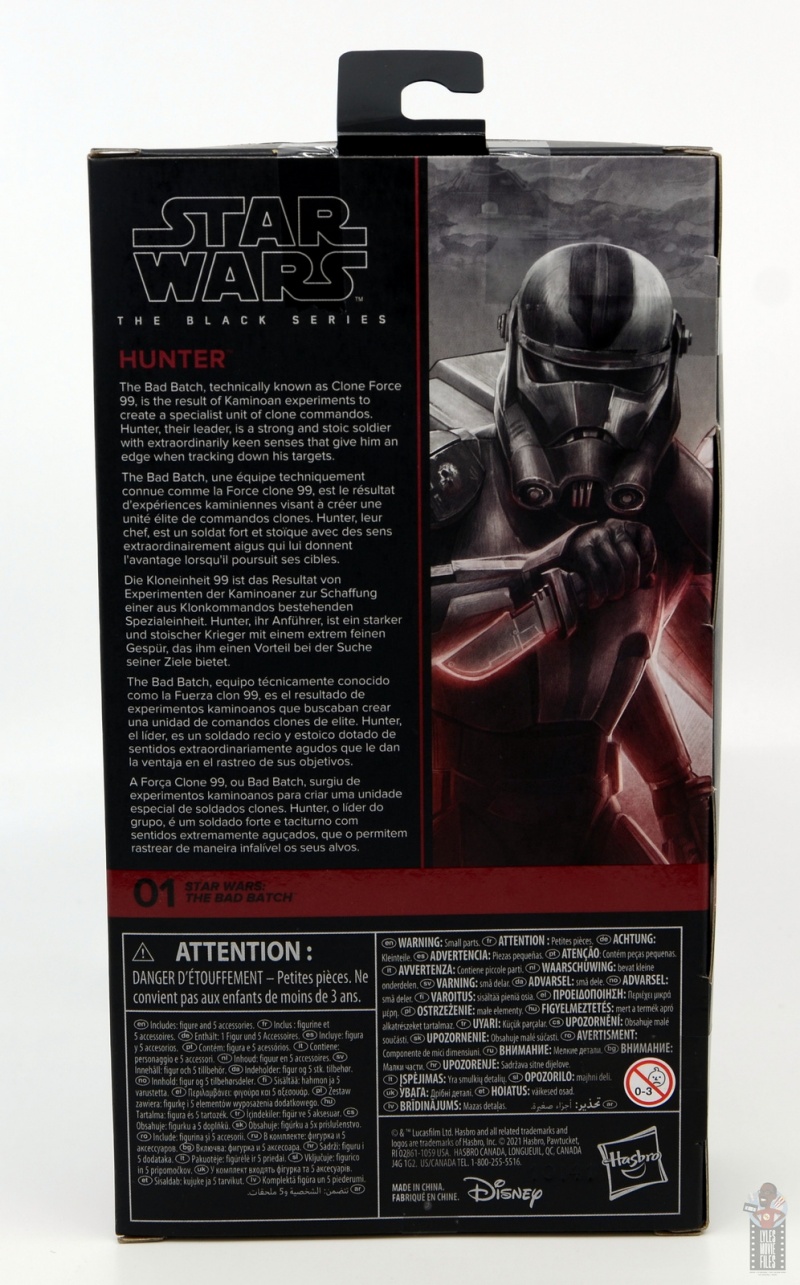 I always appreciate the bio work with the SWB line as well as it seems done with some care and an effort to educate/better inform potential customers on the character. 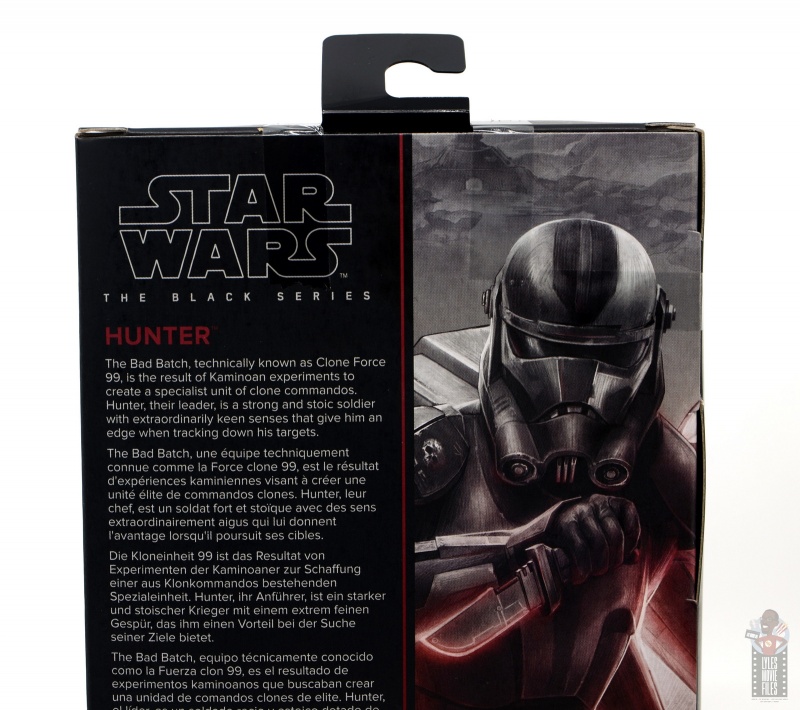 That’s the case with Hunter, which explains his role with the team.

Likeness:  Hunter is basically the Rambo clone of the Bad Batch complete with red headband. As an 80s kid, I love the look and fully understand that reference. 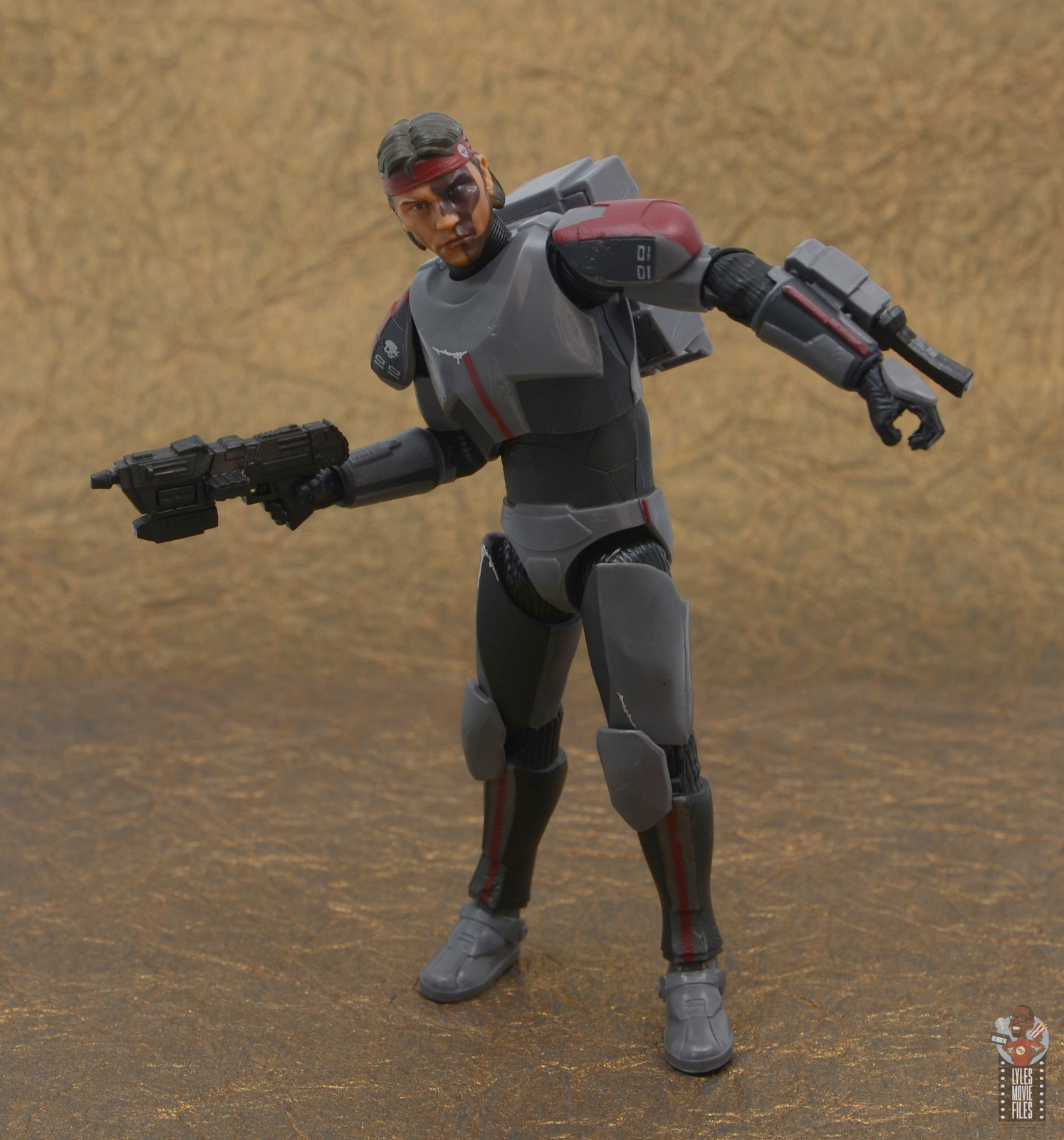 He sports an all-new sculpt, which is nice and sensible as Hasbro has the Bad Batch lined up to share parts. May as well have them look uniform and not have some of them using outdated molds. That’s great since Hasbro has really stepped up the engineering on these figures over the last few years compared to when they started. 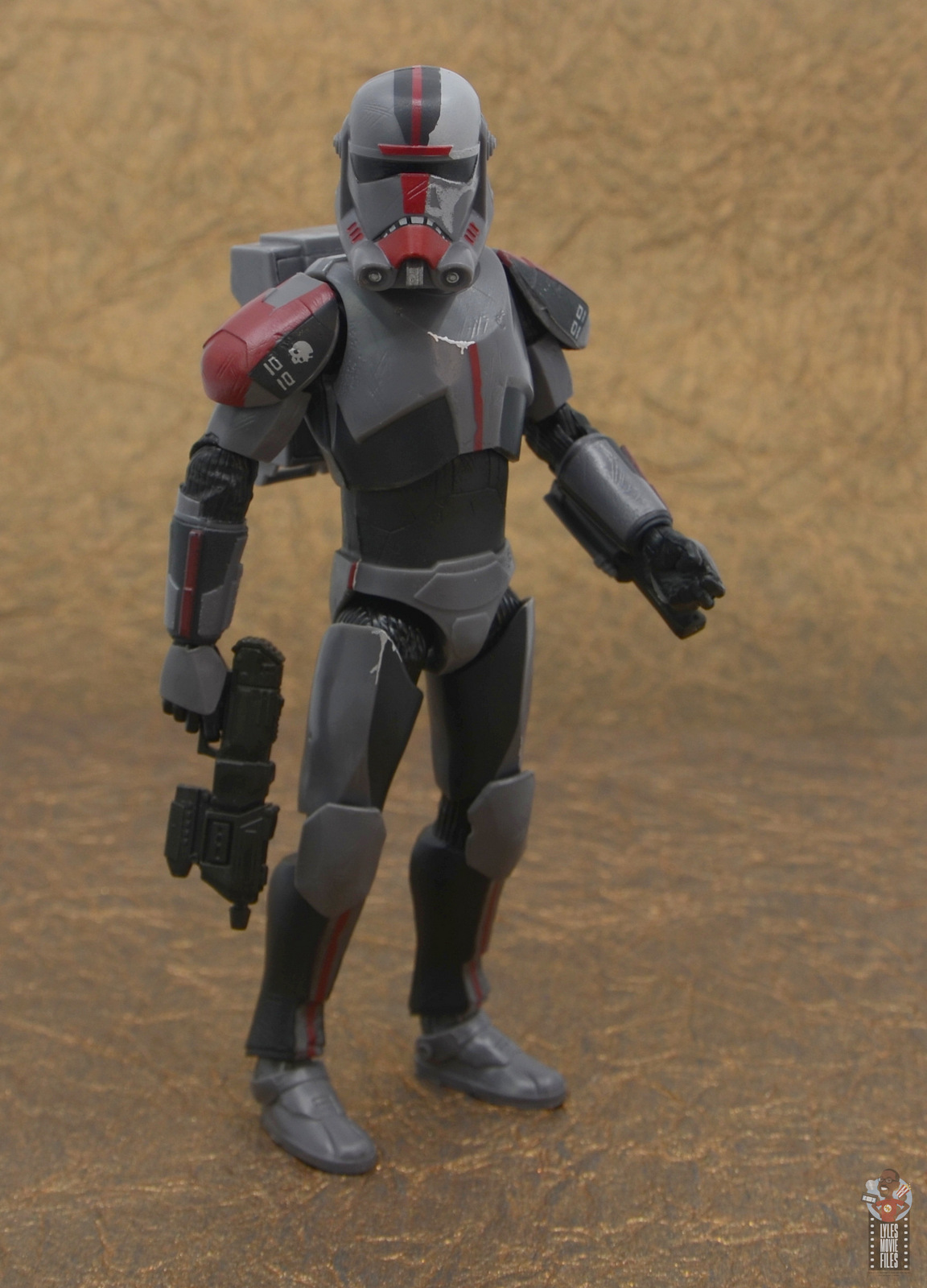 The detail work on the armor shows how much action the Bad Batch has seen as it’s loaded with scrapes, scuffs and overall wear and tear.

Hunter’s head sculpt looks fierce and intense while still keeping the distinct Clone likeness. I also appreciate the consistency with the basic Clone Army outfit with the Bad Batch attire. 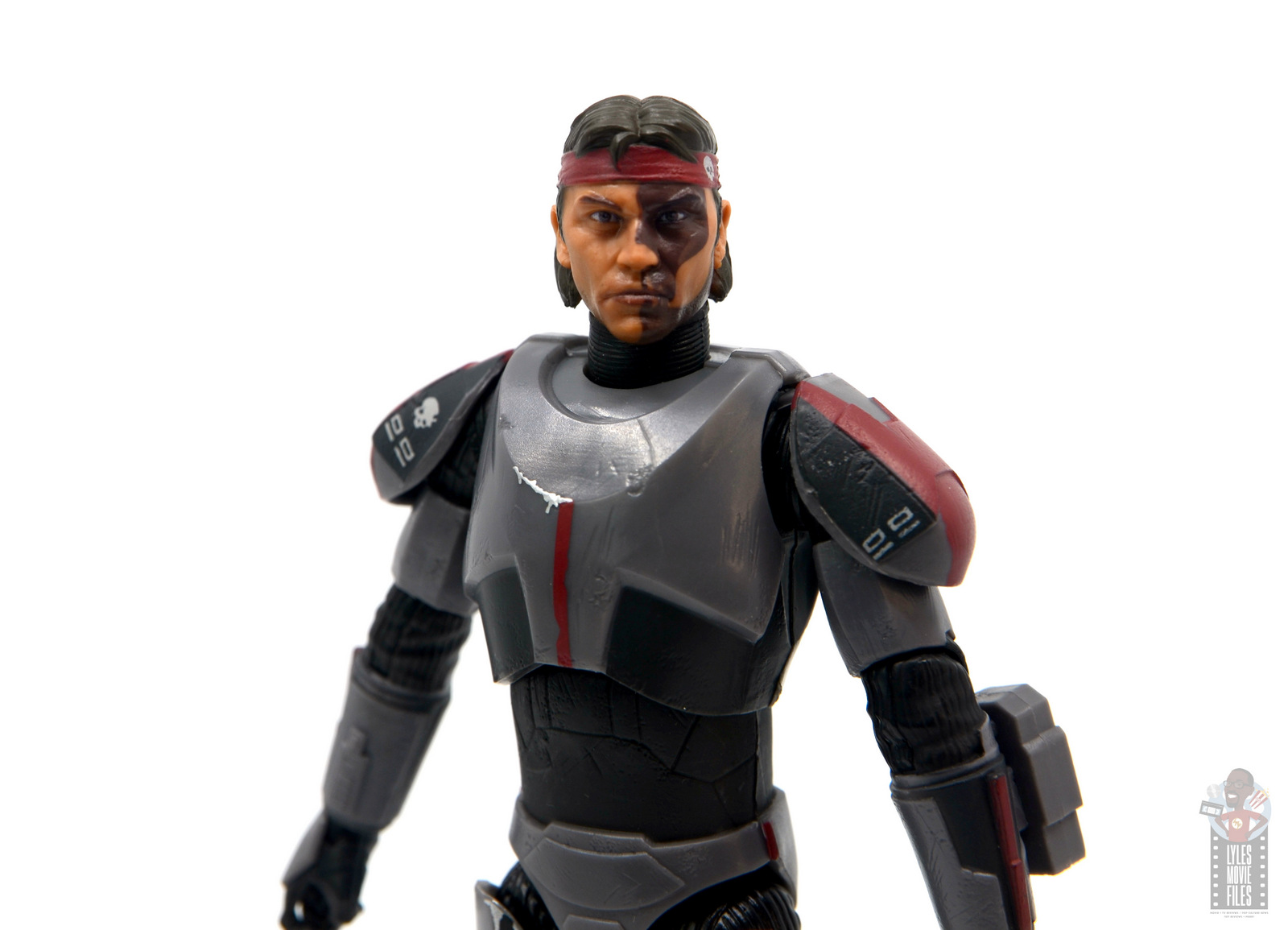 Paint:  This is where Hasbro really put in the work with Hunter. The Bad Batch feature a shadowy grey and red color scheme instead of the standard white. Hunter’s face scarring looks suitably bruised and blemished while the detail work like the 99’s skulls logo is very crisp.

Scale:  I don’t have a bunch of Clones to compare the Bad Batch up with, but Hunter should stand slightly shorter than Anakin Skywalker. 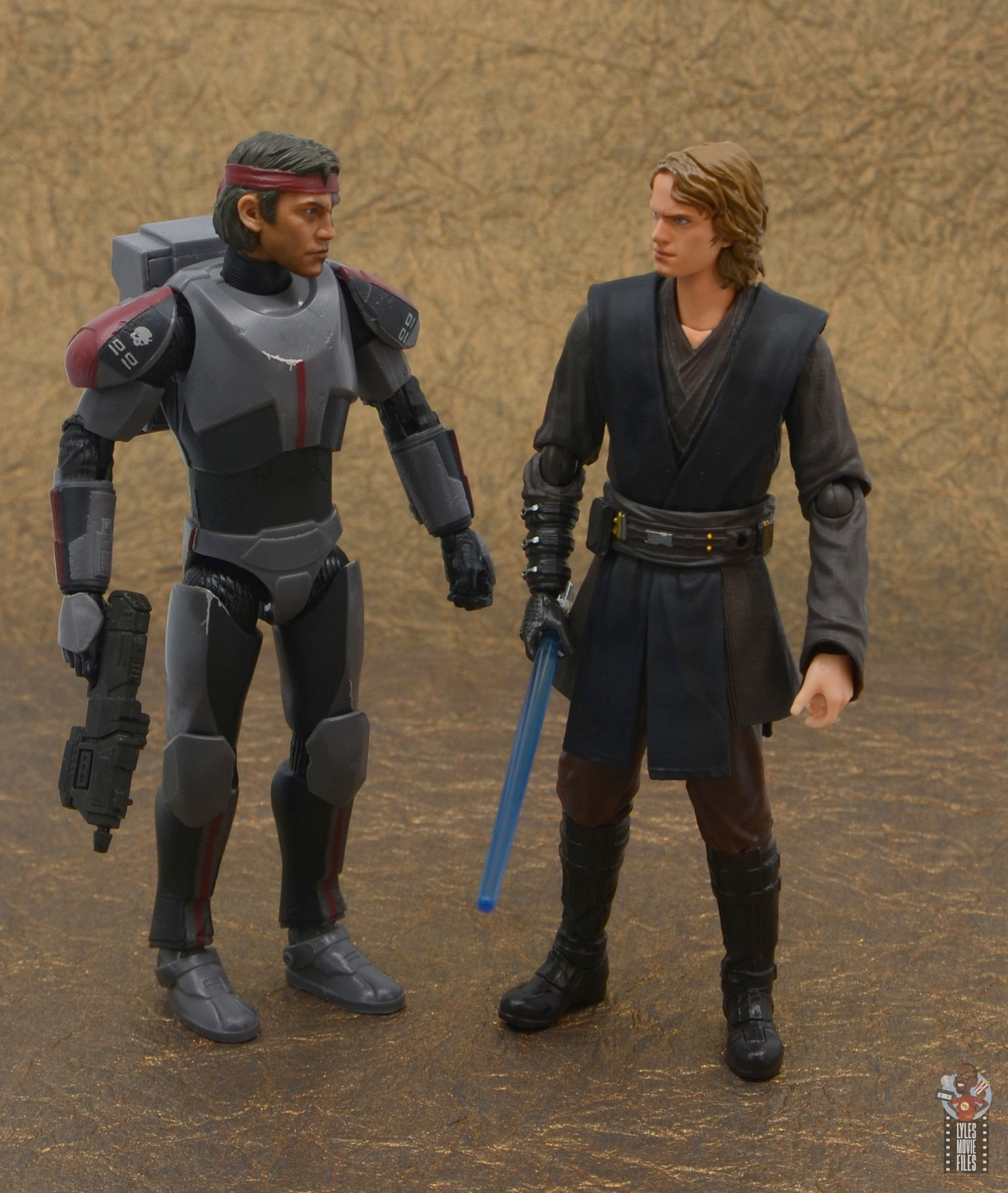 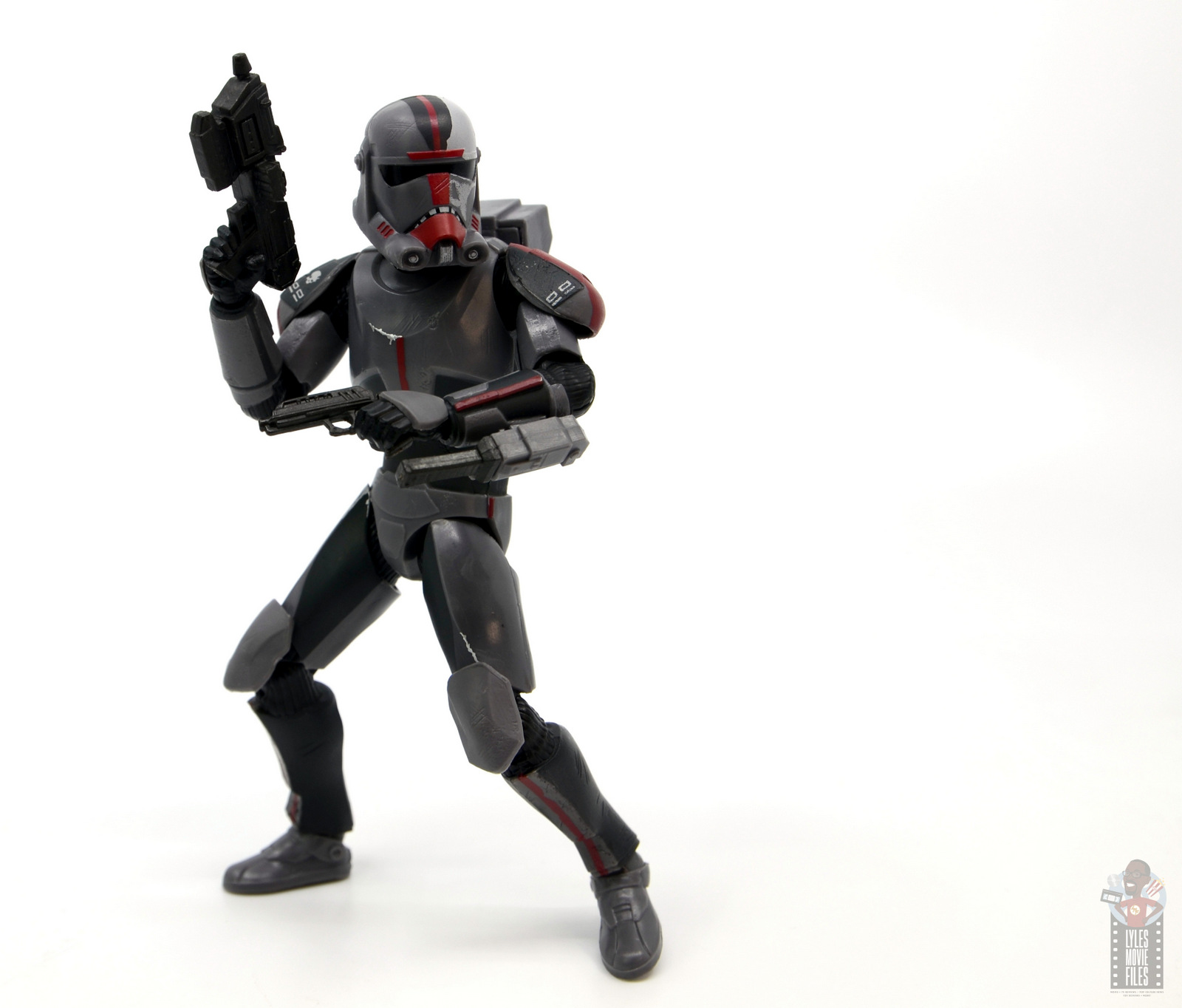 Articulation:  Hunter is the smoothest of the Bad Batch and engages in melee fighting as often as he uses his blasters. He needs to be able to move without the ratchet style articulation of older SWB figures. This body is pretty good on those fronts although I wish his  butterfly shoulders had better range. 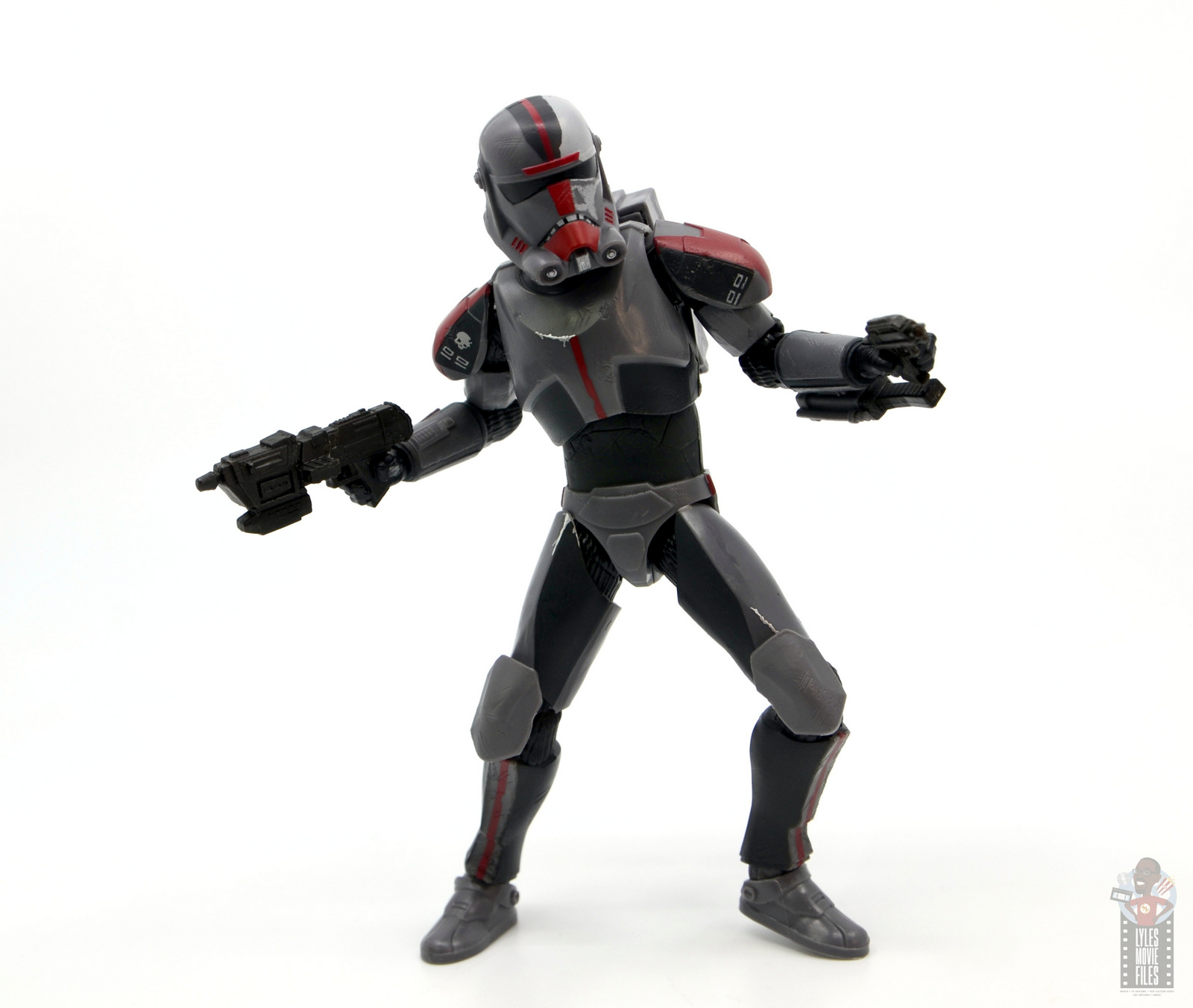 Maybe the biggest goof is the kneepads as they’re stuck floating in the air in bended knee poses. 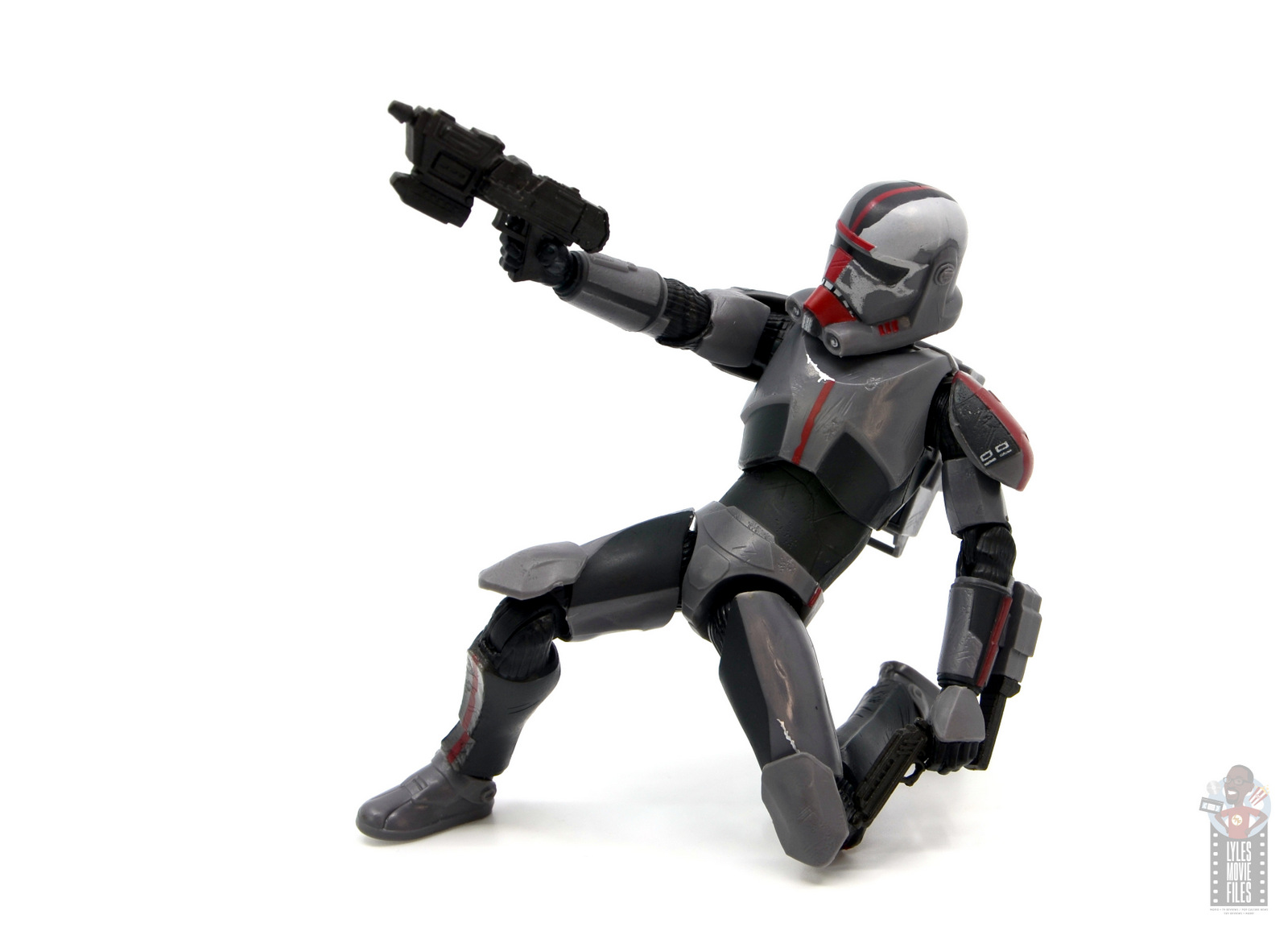 I wish Hasbro could make this a tap joint so the pad could move up and down depending on the pose. It looks silly hanging in the air. 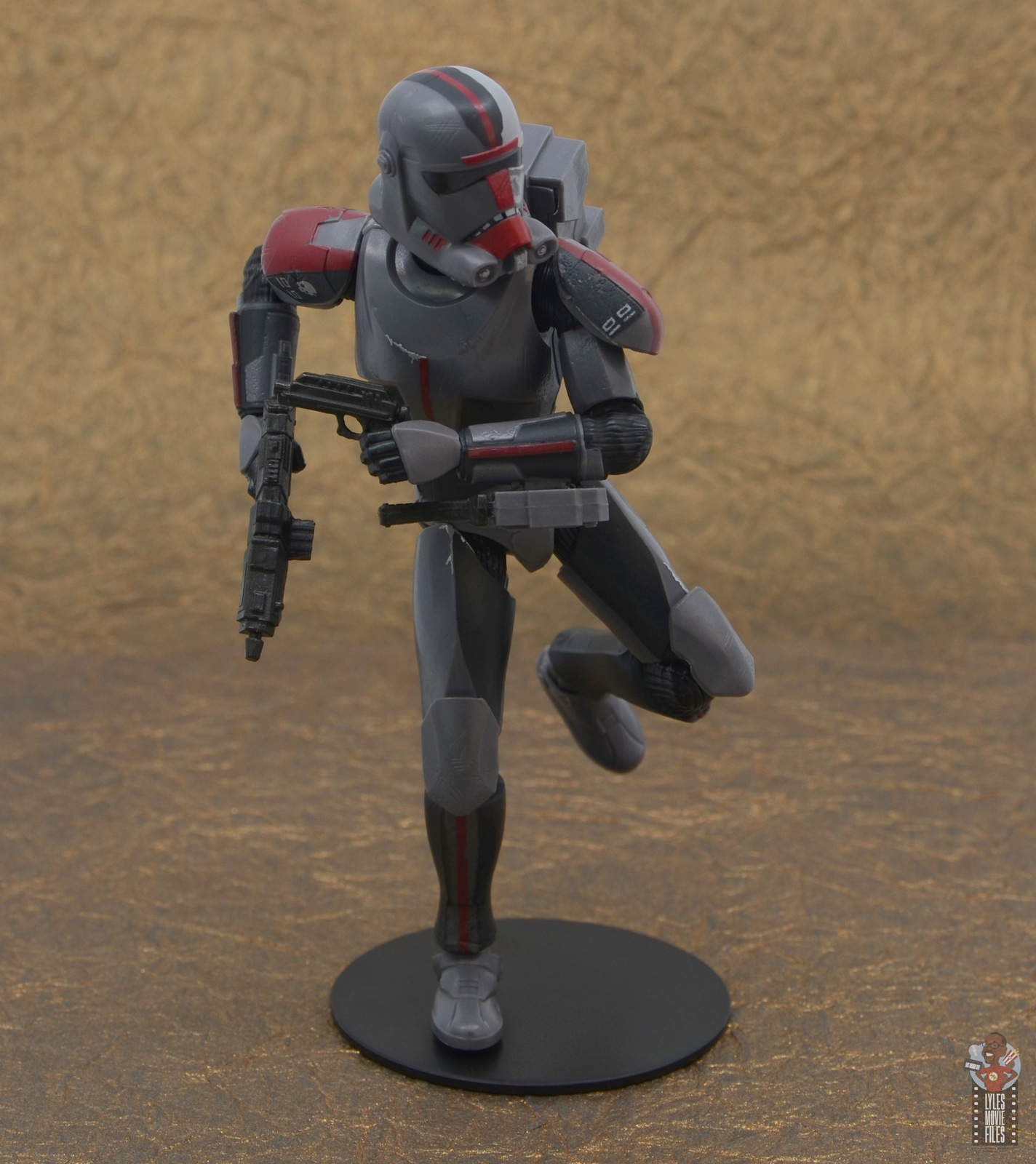 Accessories:  Hunter is loaded up with a slew of useful accessories. 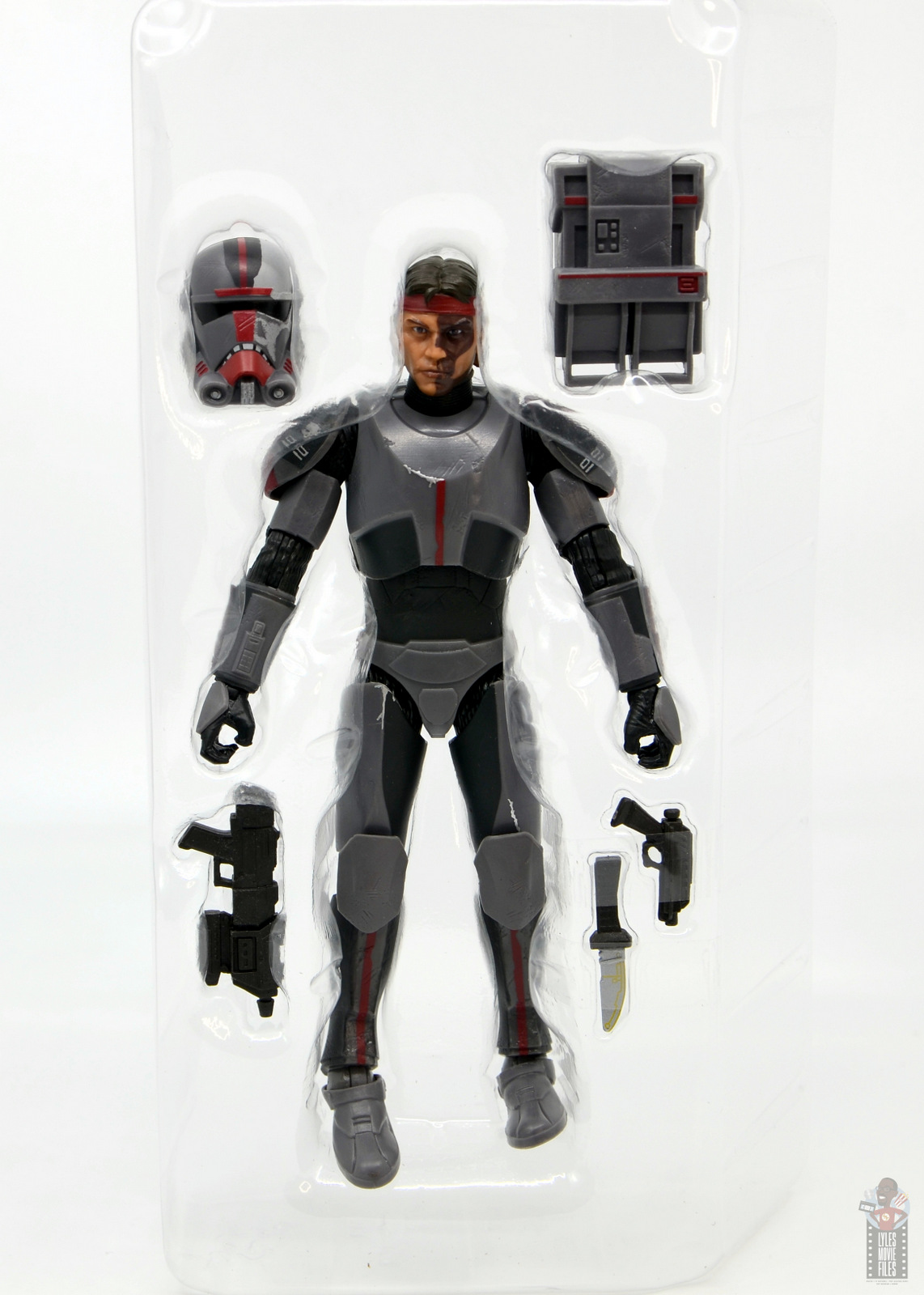 His Clone Trooper helmet is intricately painted with the two tones of grey, white, black and red. The paintjob turned out very nice without any issues. 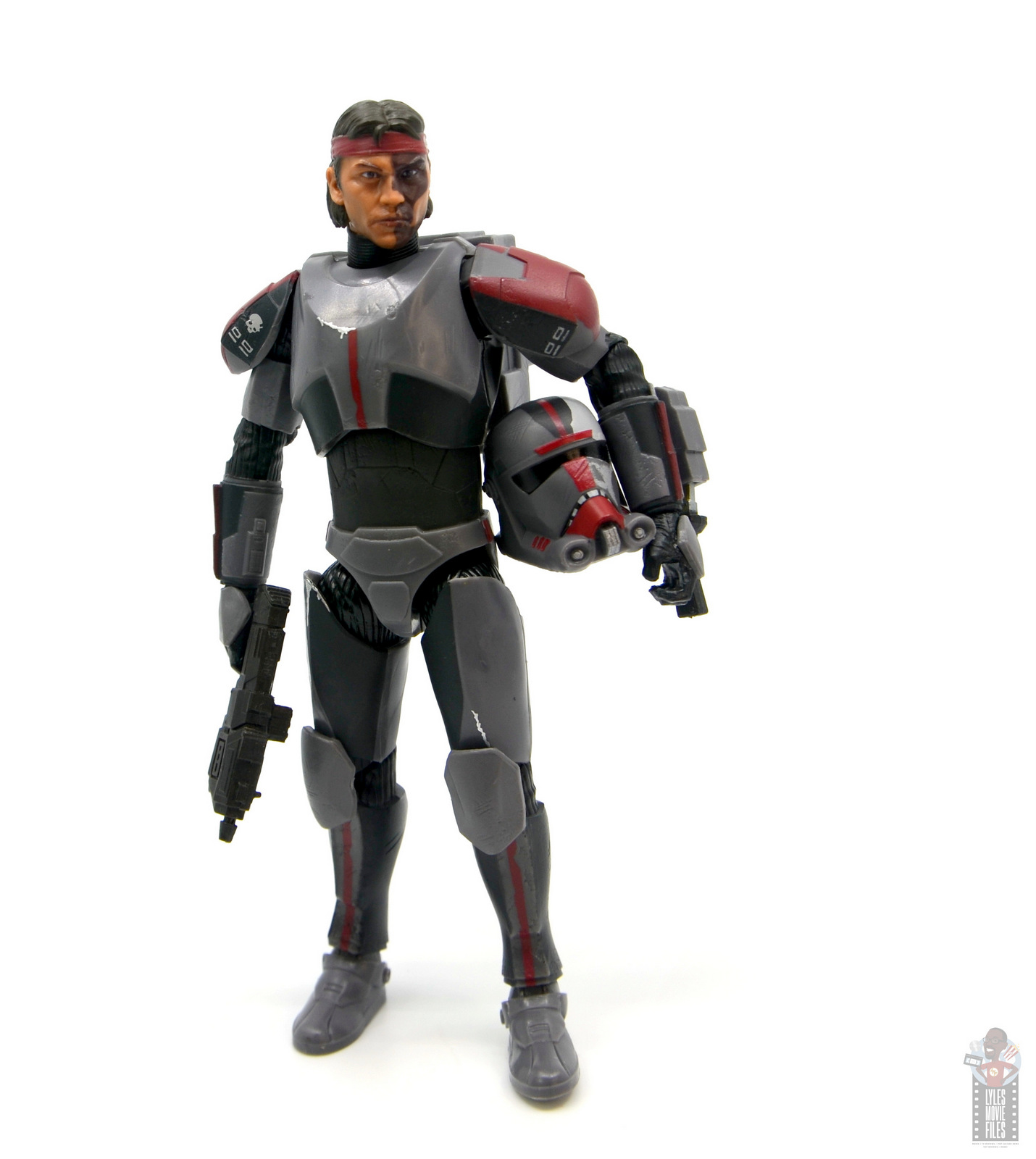 Hunter’s knife seems a bit small as the handle is larger than the blade, but as I rewatched their debut episode that is the proper length. The knife fits in Hunter’s left gauntlet. Just as impressive, the blade has some paintwork on it as well. 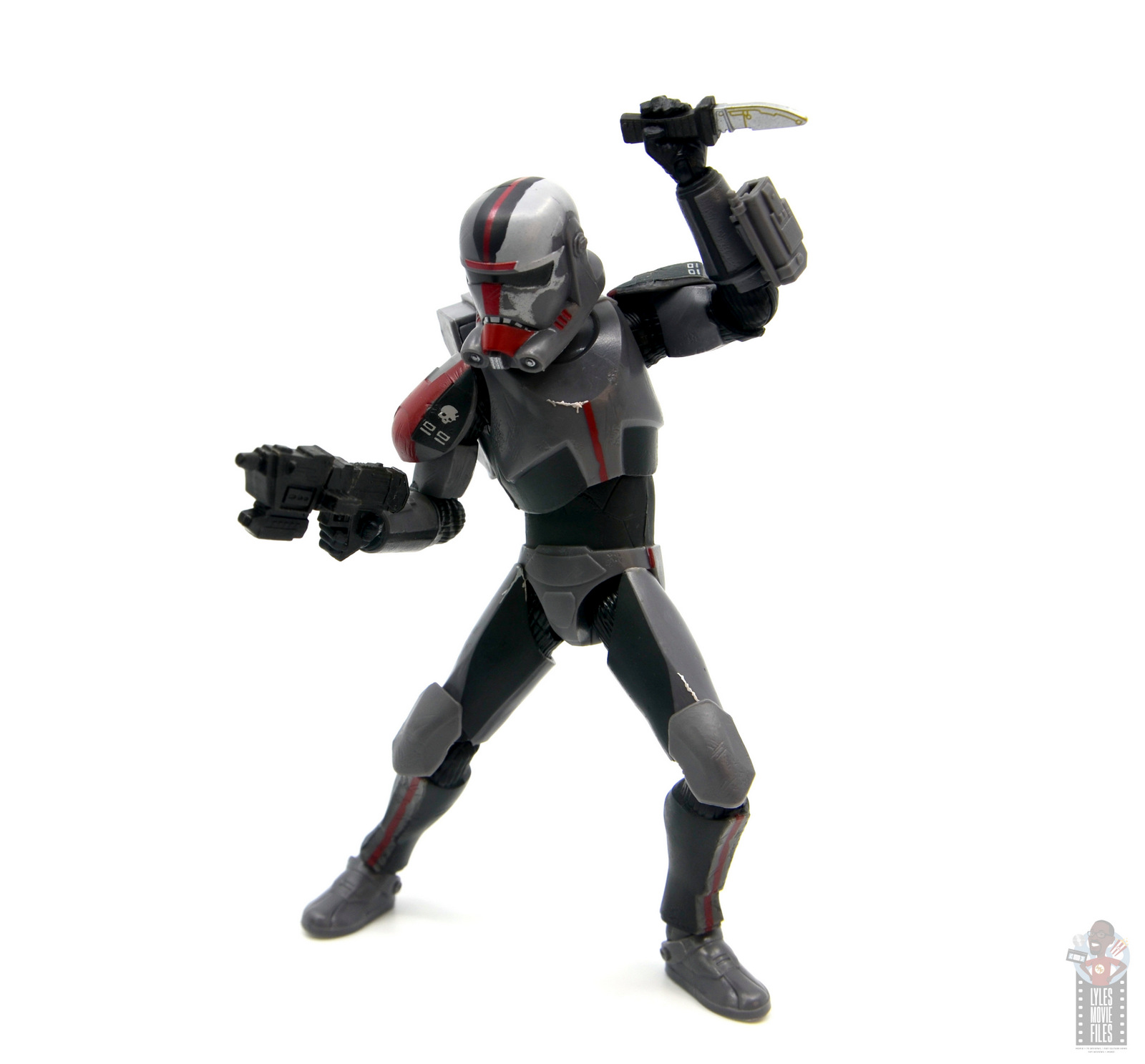 His backpack plugs into a peg in his back snugly and it has enough detail that it’s not a boring add-on. His larger and smaller blasters have the standard high level of detail that is the norm for The Black Series.

Worth it?  I got Hunter for the basic $20 price tag. That’s not ideal since there’s no difference between these guys and standard figures.

Besides the wonky kneepad, this is a really nice figure. I do wish there were a bit more range with the shoulders but beyond that I don’t have other complaints and can’t wait to complete the Bad Batch. 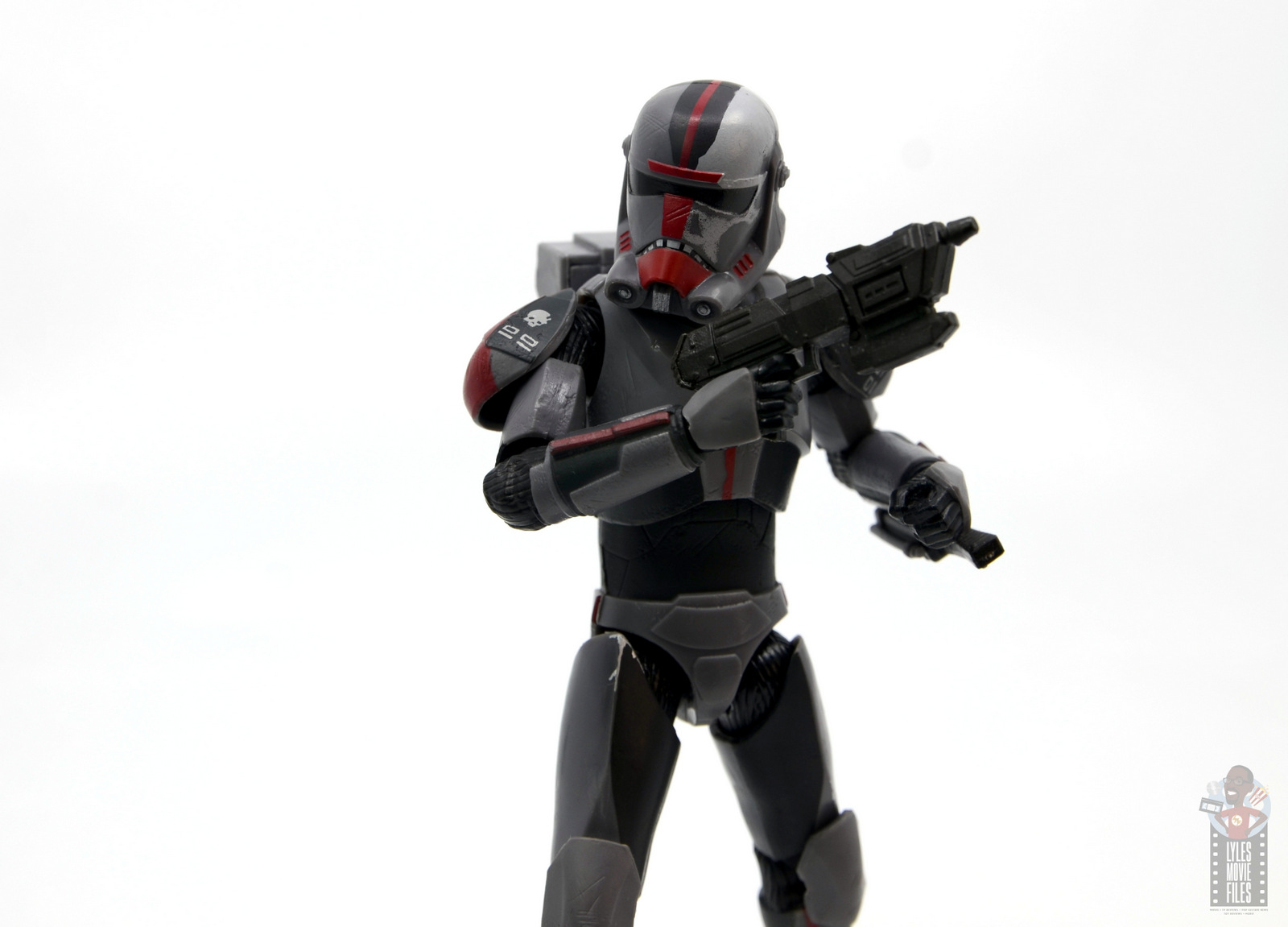 Where to get it?  You can grab Hunter from the usual retail suspects like Target and Walmart if you’re lucky. If not, give Amazon or Entertainment Earth a shot.