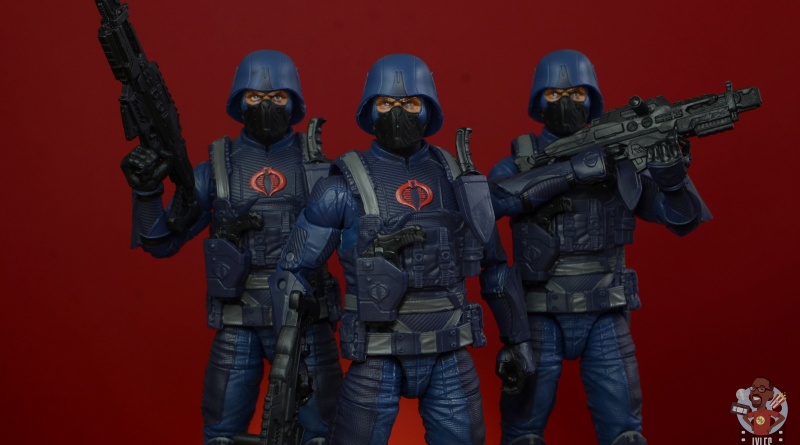 Hasbro has made some mistakes with its GI Joe Classified Series line. I’d put limited availability right at the top, but another close second would be the Target exclusive Cobra Island figures. The first wave featured the Cobra Infantry trooper, which was a questionable decision given the obvious army builder nature of the figure.

Target was ill-equipped to handle the demand for these guys so Hasbro opted to re-release the Cobra Trooper with a slightly modified paint scheme and without a few accessories and a slight renaming as the Cobra Infantry figure. Now the only limit to building a massive Cobra Infantry army is your money and display space. Let’s see if this guy is worth the investment. 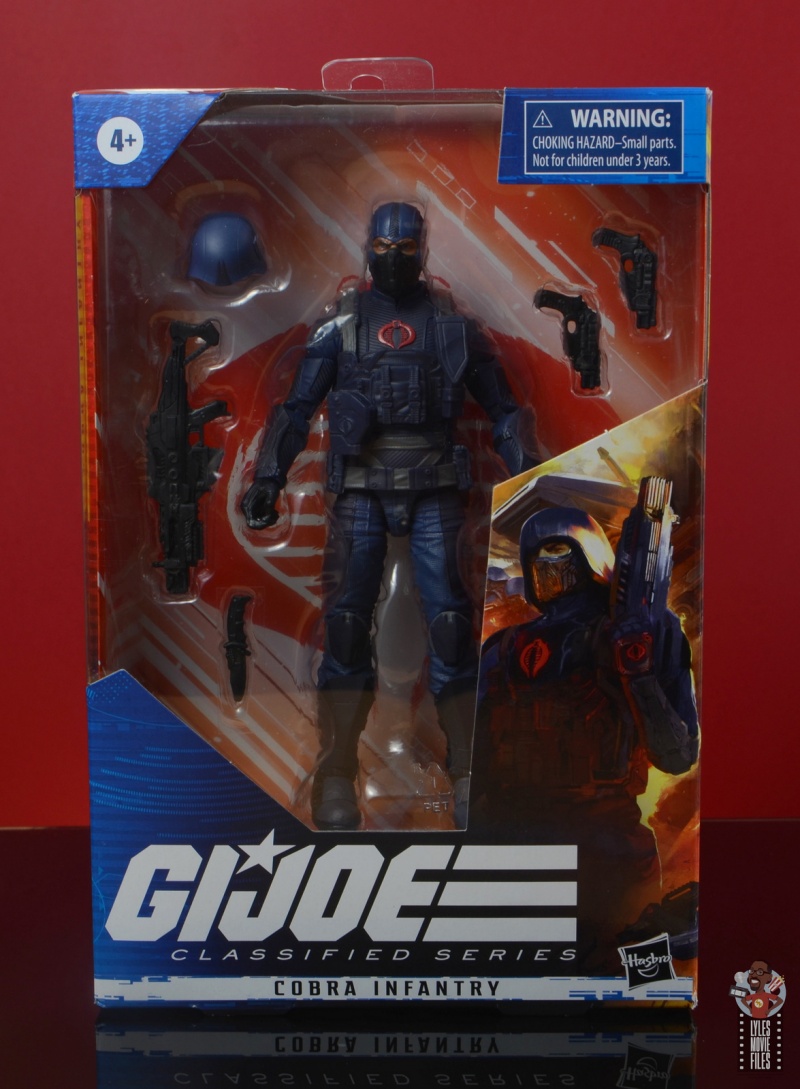 Obviously there’s no Cobra Island designation on the front and the back features the slightly updated poster that now includes Beach Head, Zartan, Firefly and the Vipers and Cobra Troopers. I dig this poster simply for including more characters although Storm Shadow is now gone.

Hasbro also photoshopped the goggles off since they’re not included with this Infantry trooper. And I love the symmetry of the first Cobra Trooper being No. 12 in the line and Cobra Infantry is No. 24.

We still get the same break down of the Cobra Trooper skill set with their 1-star ranking at Foot Soldier, Light Weapons, Hand-to-Hand Combat and Sabotage.

And here’s the bio courtesy of the G.I. Joe website: Cobra Troopers form the core of the Cobra forces. Their ranks are made up of criminals from around the world who have been drawn to their sinister hiss and dark message that is the Cobra call. Typically wearing masks to hide their identity, they carry out chaos-causing missions handed down from Cobra Commander, who they faithfully serve without question. 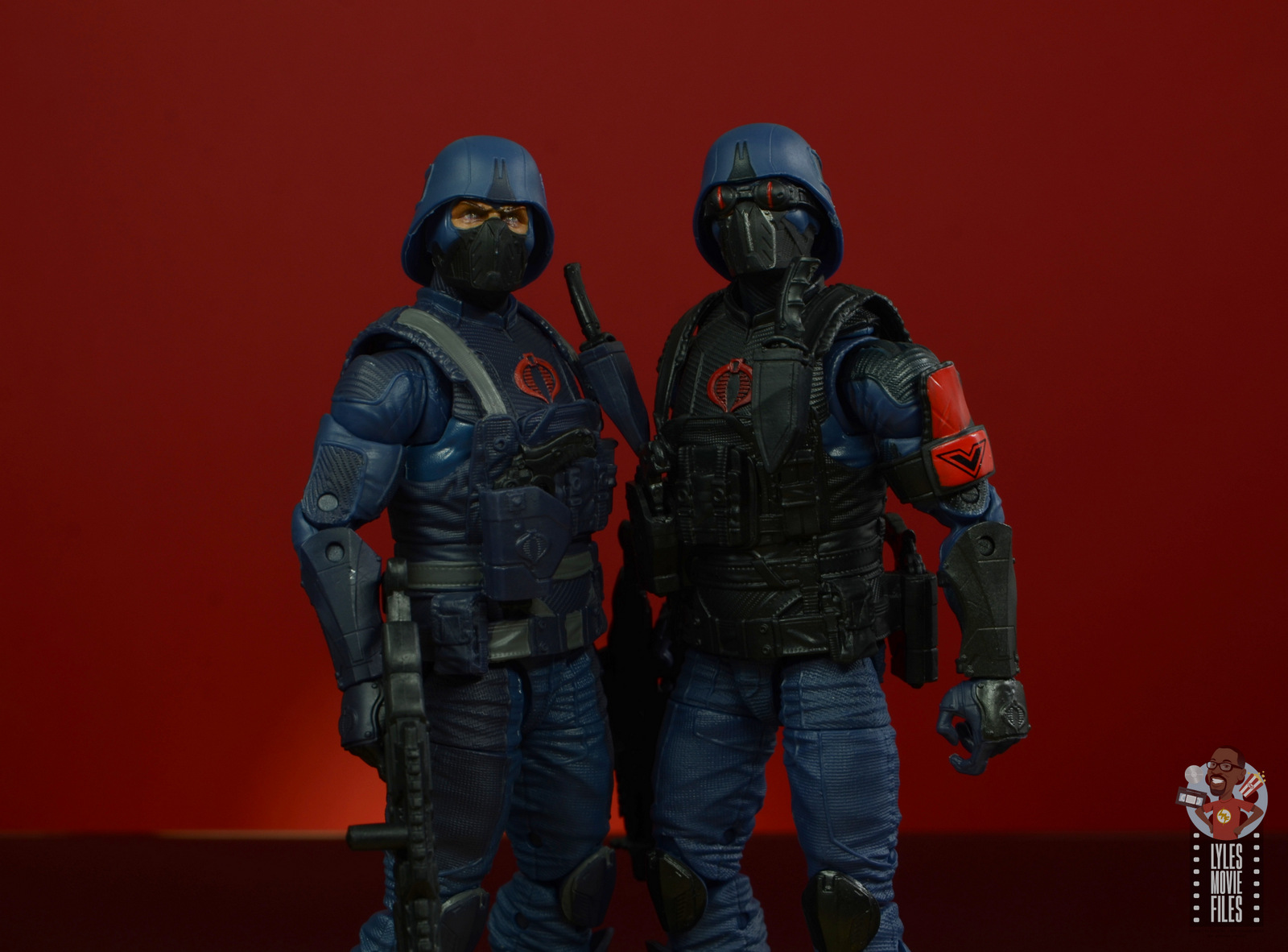 Likeness: Sculpt wise there’s no change from the original Cobra Trooper release. That’s fine as these guys look far more intimidating than they ever did in the cartoon. 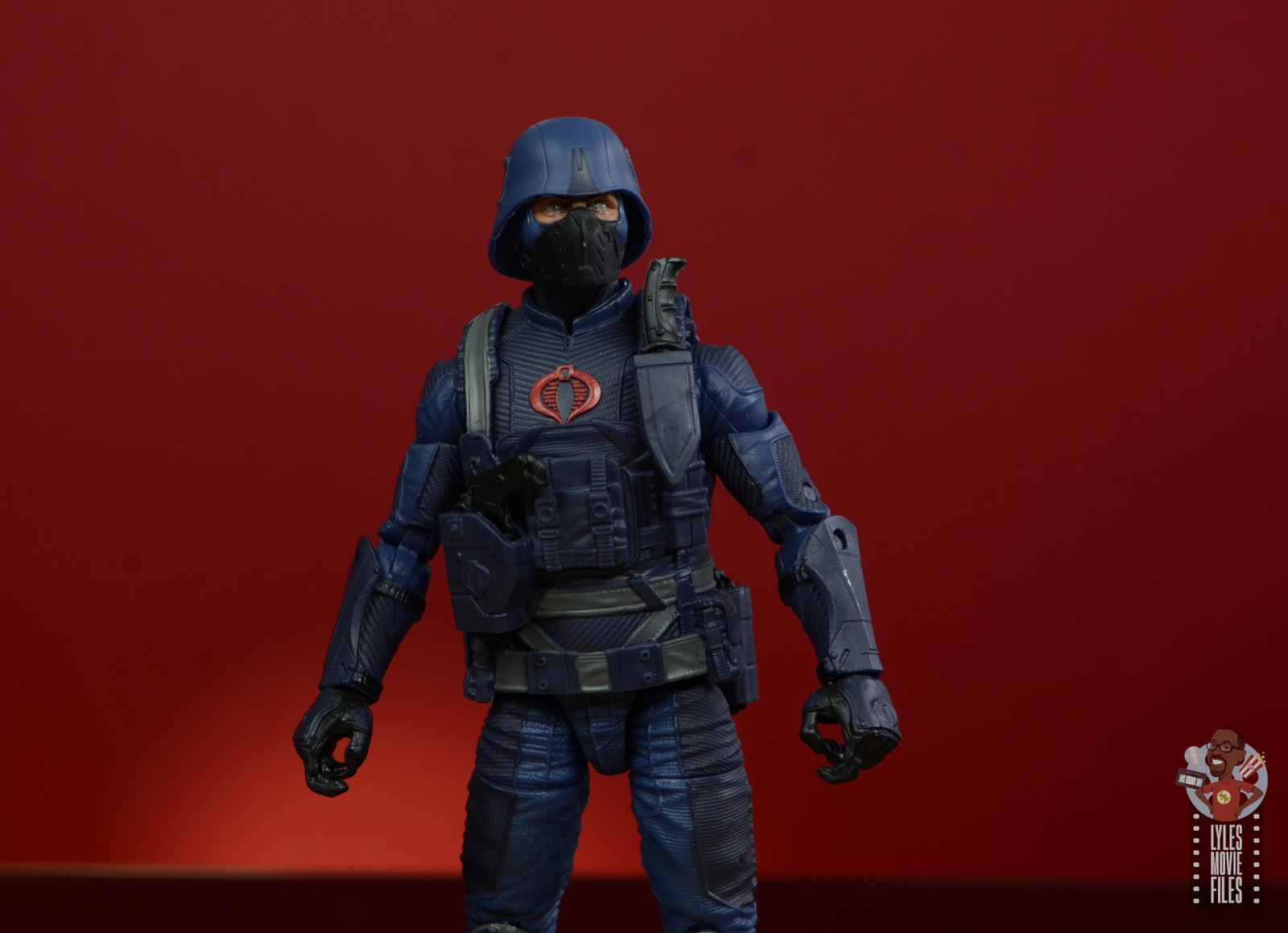 The Classified Series Troopers are decked out like a tactical SWAT team soldier and look fully capable of holding their own against one or two Joes…save Snake Eyes and Scarlett.

I still love that intense head sculpt with the psychotic storm the Capitol kind of eyes. The mask is far more effective than a piece of fabric and looks like it has some rebreather elements in case the Troopers land up in the water or are trailing Toxo-Vipers. 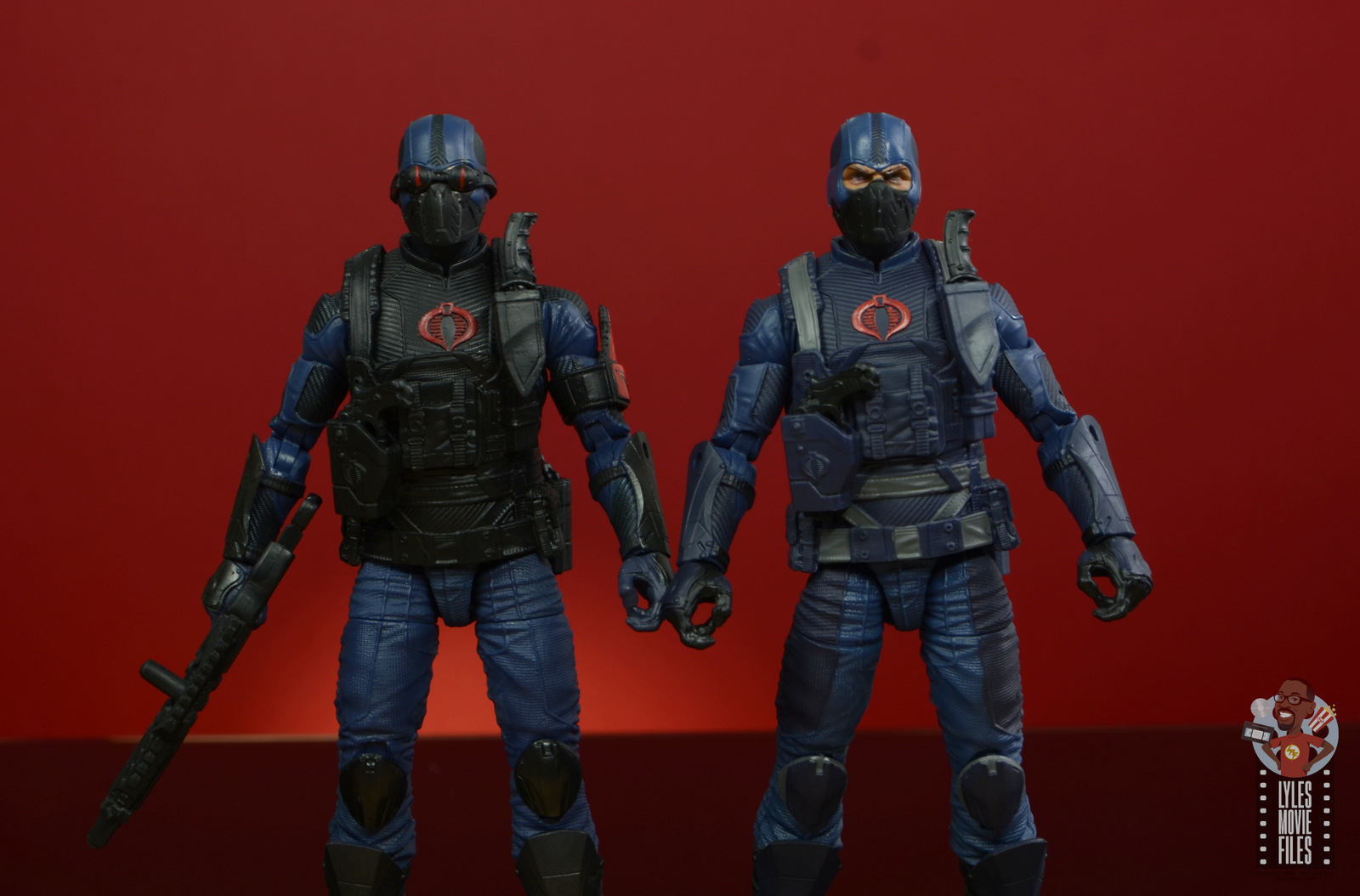 The Cobra insignia is embossed atop a ridged shirt. The arms are also new pieces, but from there on the figure is a reuse of the original Duke figure with new boots. 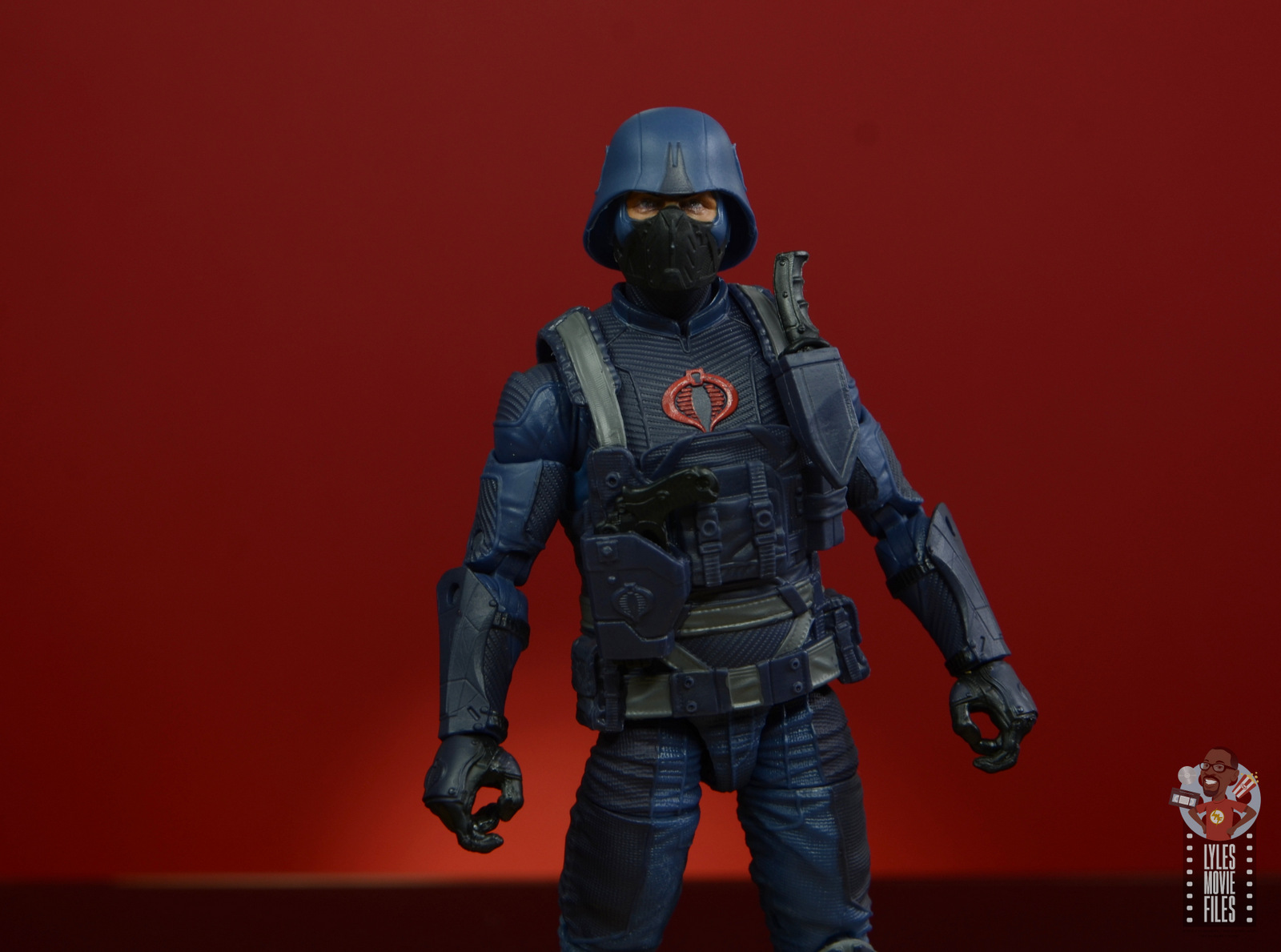 Paint: Here’s the biggest difference from the CI Cobra Trooper. That version sported a lot more black accents. This version traded the black elements for a darker, almost midnight blue.

It’s still different from the basic navy blue on the bulk of the figure while having a more consistent color scheme. There is some grey elements on the flack jacket harness areas to provide some contrast. I didn’t mind the black and I don’t mind the mostly blue attire with this version of the Cobra Trooper.

In the original Real American Hero figure line, the Cobra officers had silver harnesses so I won’t have any problems making my CI Troopers the officers and this version the lower tier grunts. If everything works out, I should have a lot more of these guys to balance out my three CI Troopers anyway.

Scale: The Cobra Troopers come in just a little shorter than Duke without the helmet, which is perfect. 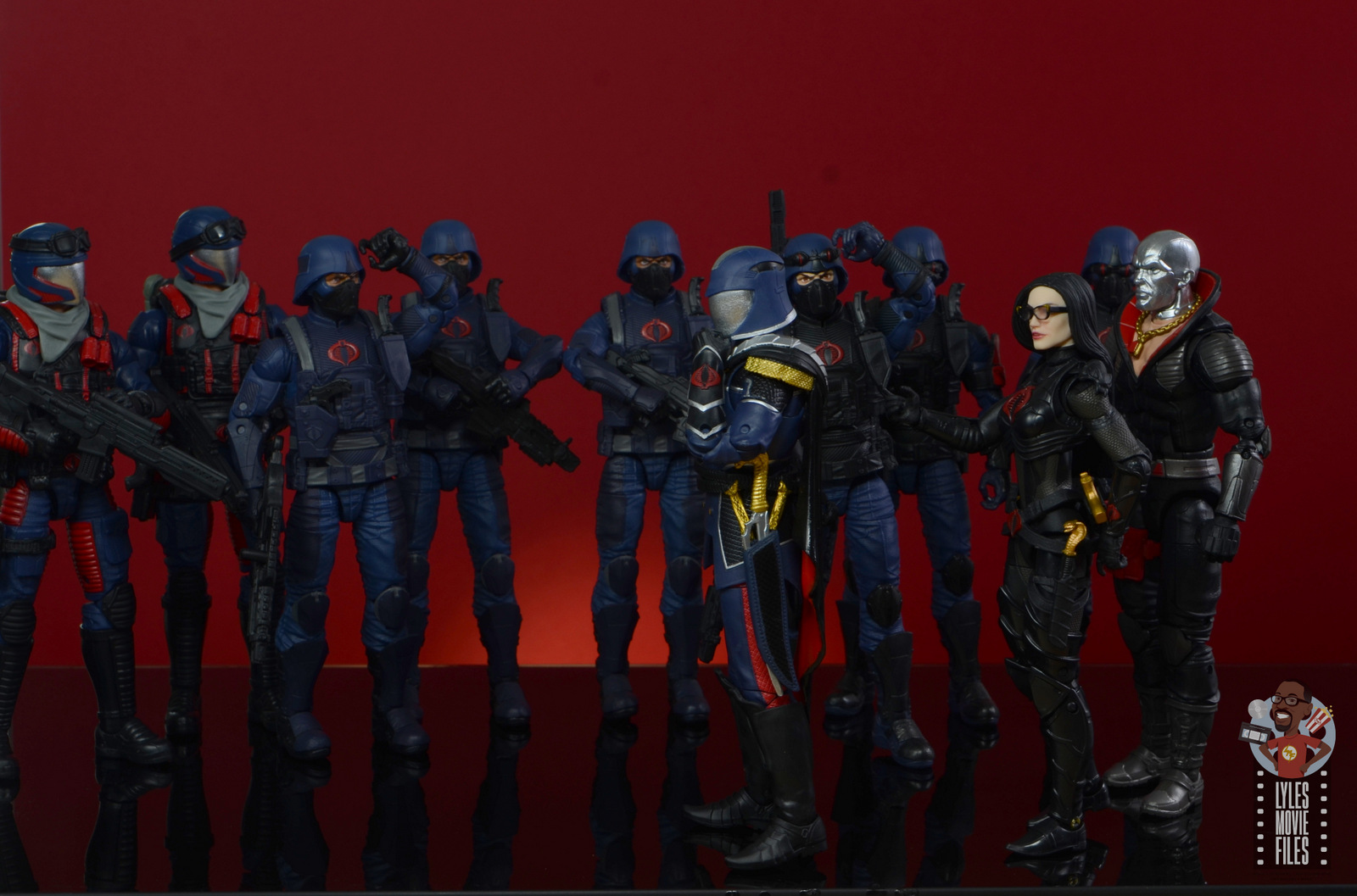 Articulation: You can get a ton of fun poses out of the Cobra Trooper. You might need to work the joints out a little as they are a bit stiff at times, but once you loosen them up it should be smooth posing. 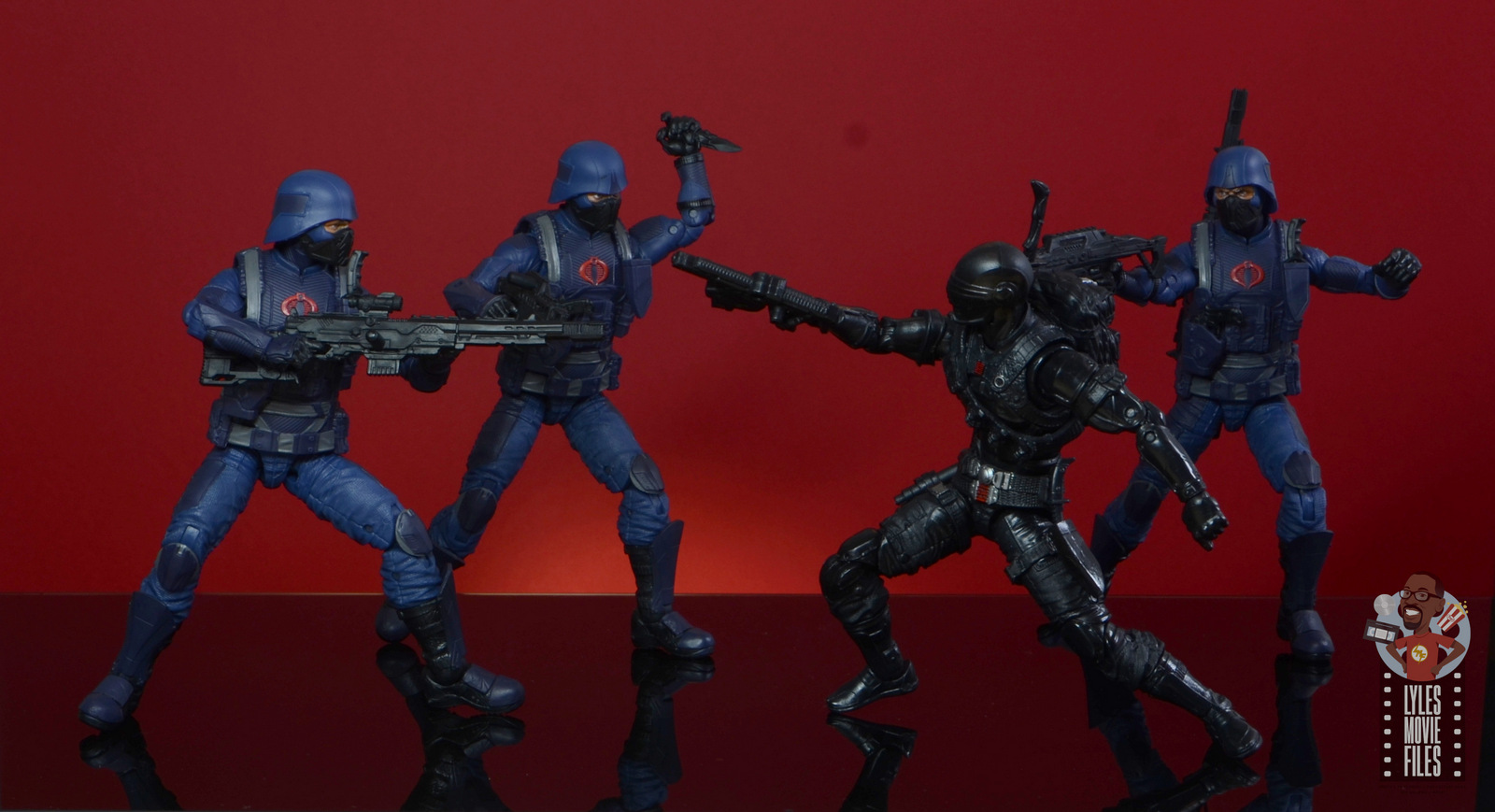 As you’d expect the flak vest does restrict some of the back and forth movement in the mid-section. I’m hoping going forward Hasbro figures that part out. 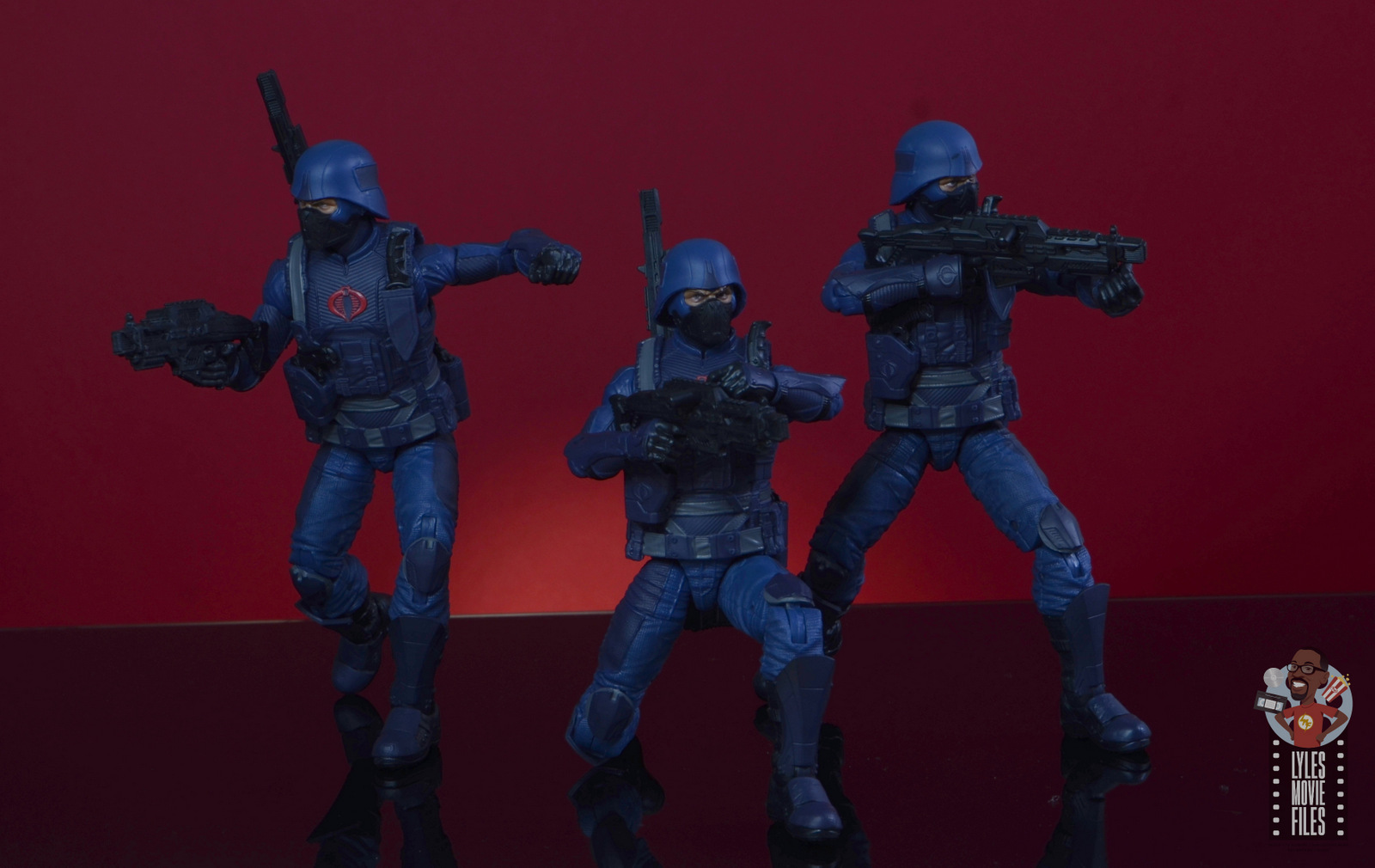 Accessories: Here’s the rub if you missed out on the CI Trooper. This standard version loses three accessories. The biggest is Cobra approximation of a Dragnov sniper rifle, but you’re also shortchanged on the awesome goggles that perfectly captured that snake eyes visual with the helmet. And there’s no armband with the rank. That piece is the one accessory I don’t miss. 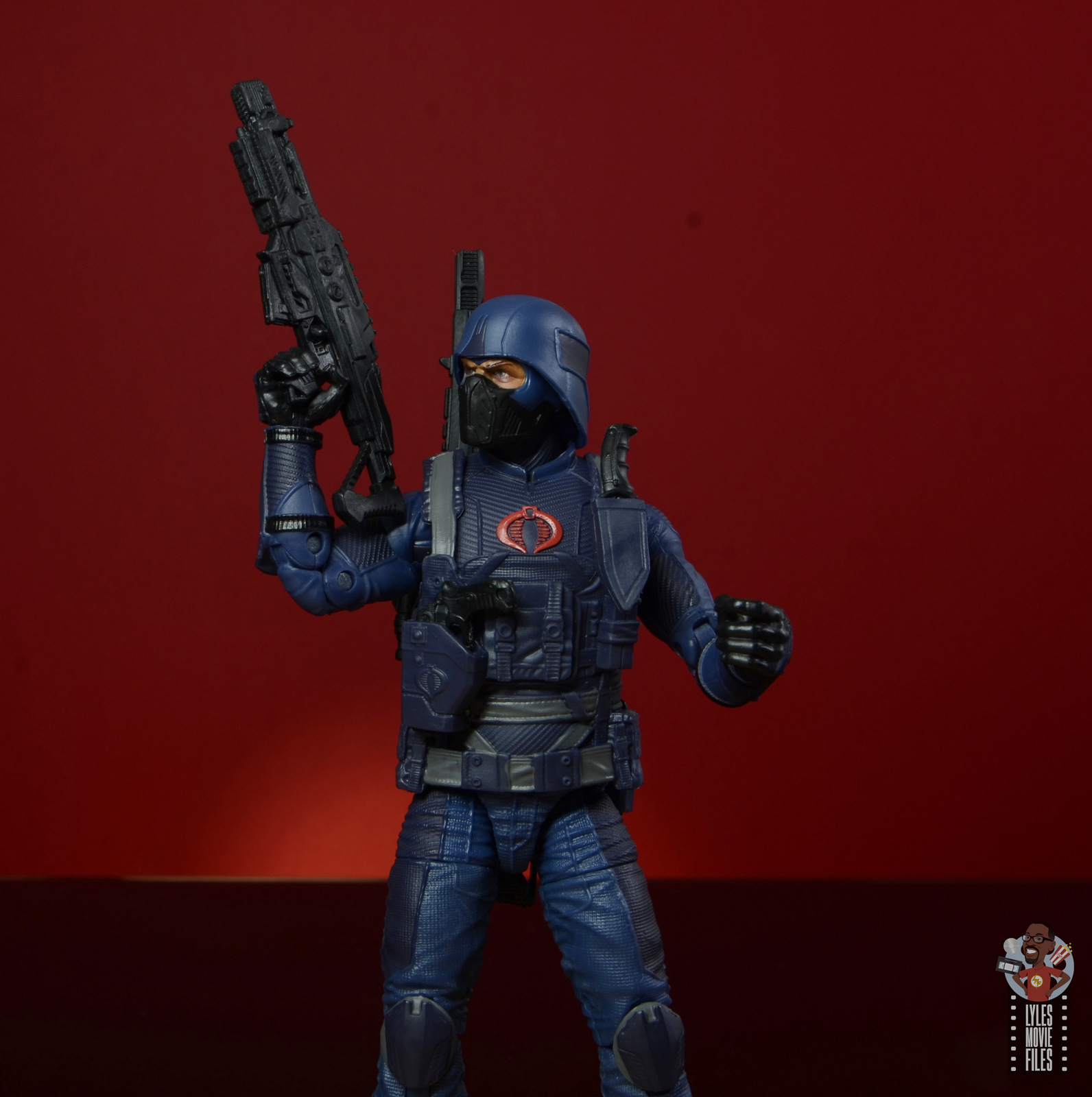 That said, the Cobra Trooper still has a decent amount of gear. He has a medium sized machine gun and two smaller pistols. The pistols fit into the front and rear of the flak jacket. The knife also fits in the sheath in the flack jacket front. If you’d like you can plug the medium blaster on a port hole in the back. 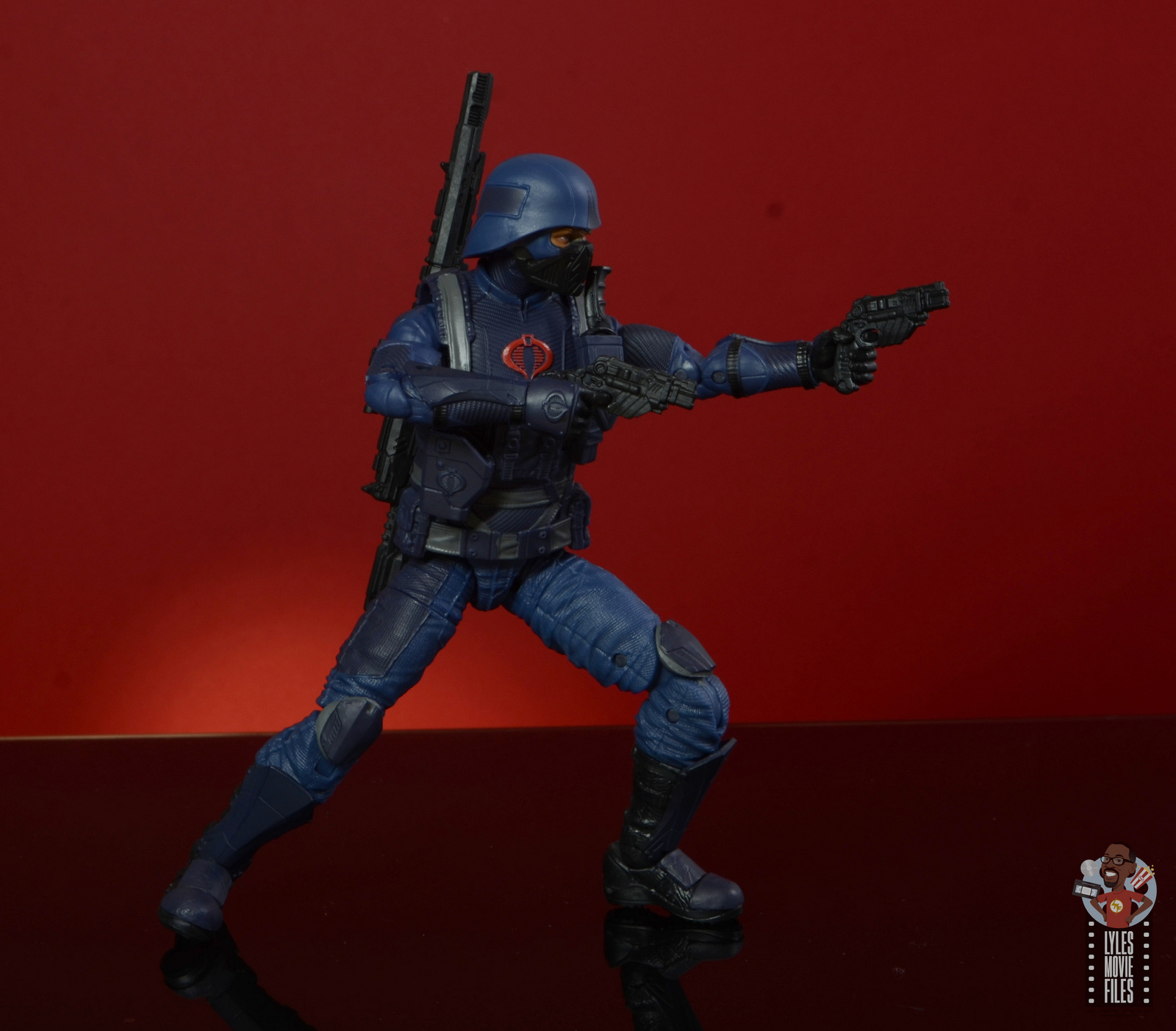 I really wish of all the dropped accessories Hasbro had included the goggles. They really complete the creepy look of this updated take on the Cobra army. As you’d expect you can still use the accessories from the Cobra Trooper all the same. 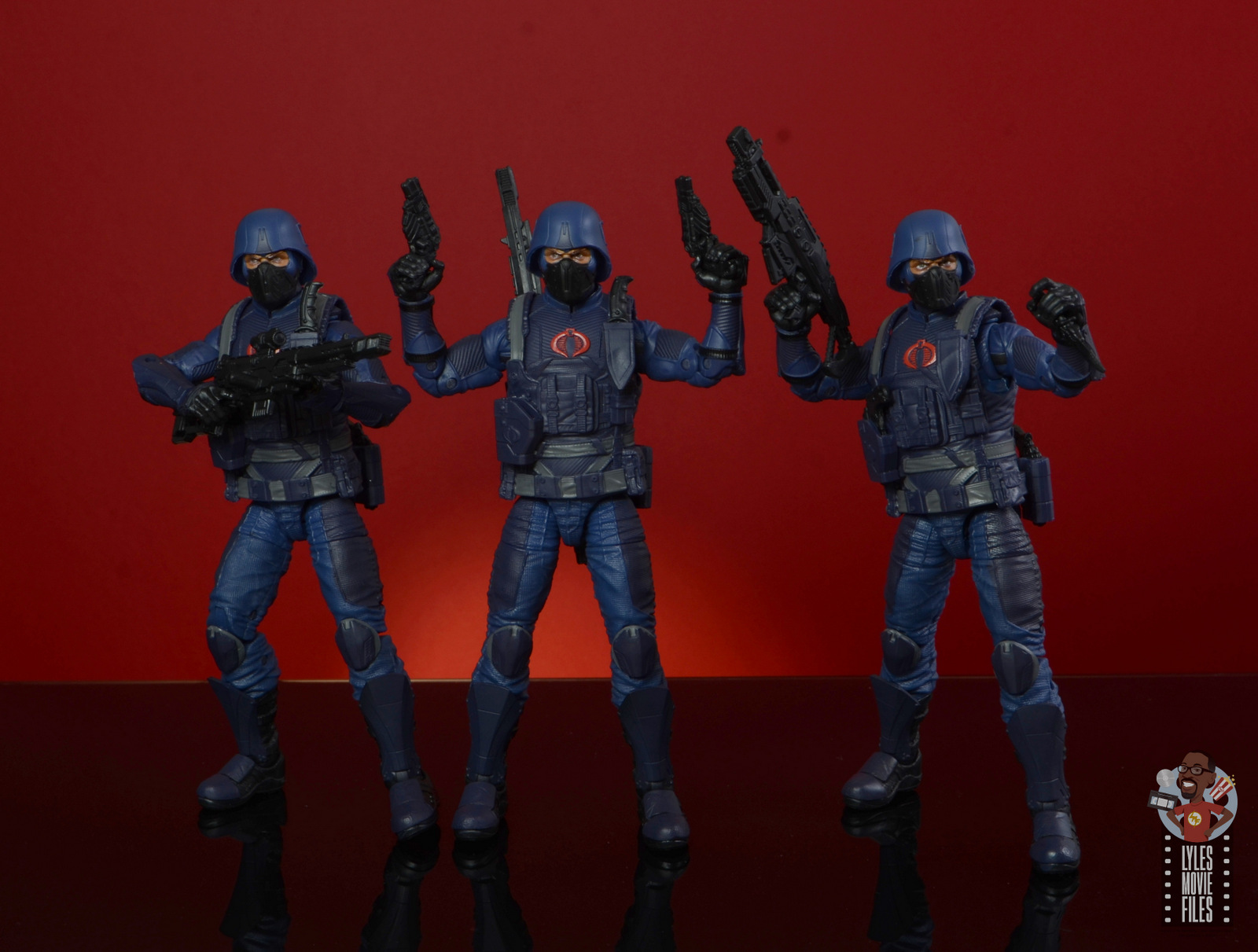 Worth It? At $20 these are a great value and price even with the reduced accessories. I wouldn’t say no to a Hasbro Pulse army builder price with just the helmet and medium rifle either. 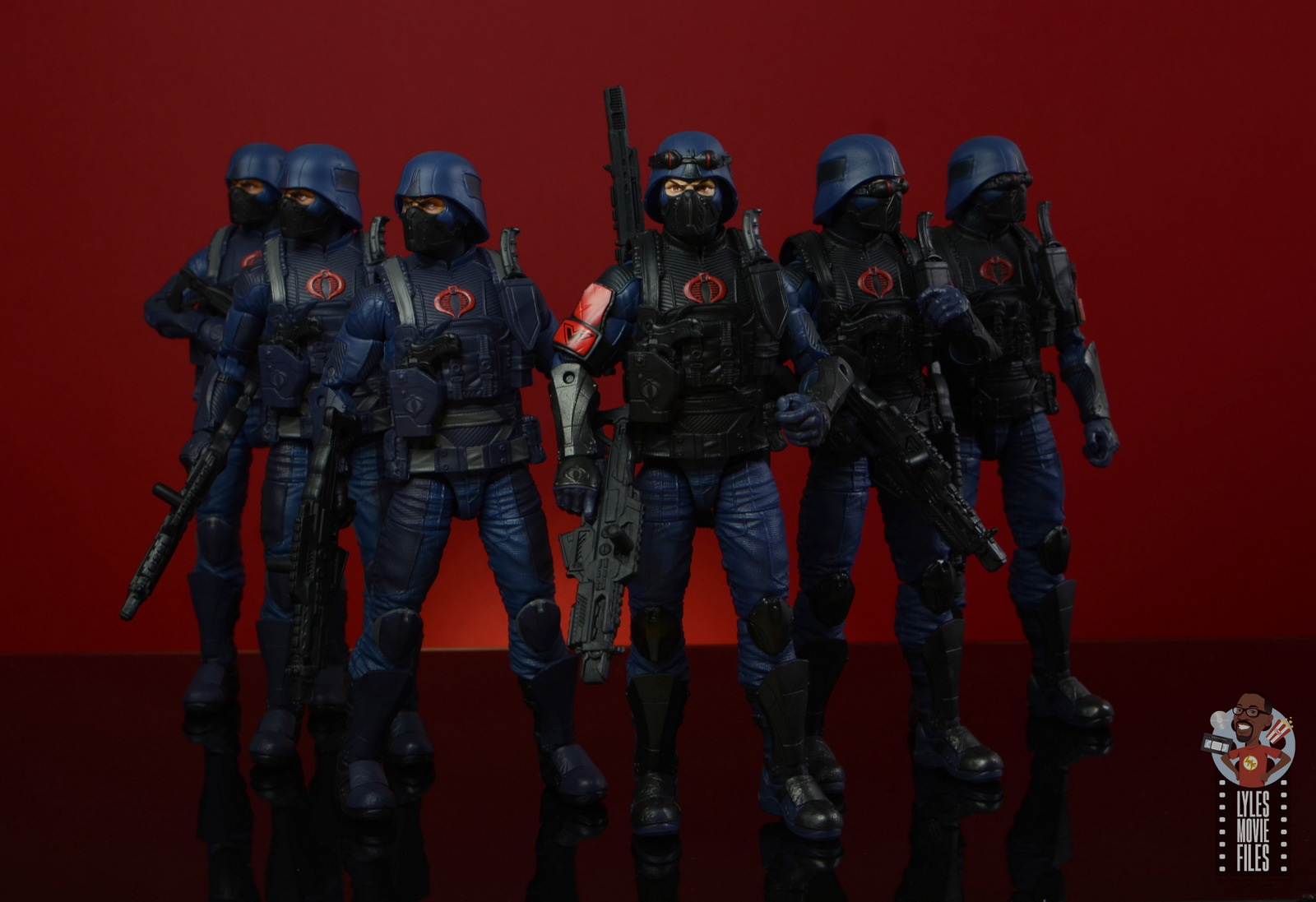 I’m not going to ding this figure too hard for missing some accessories especially when it still comes with five. And at least everyone gets a fair shot at army building this version. 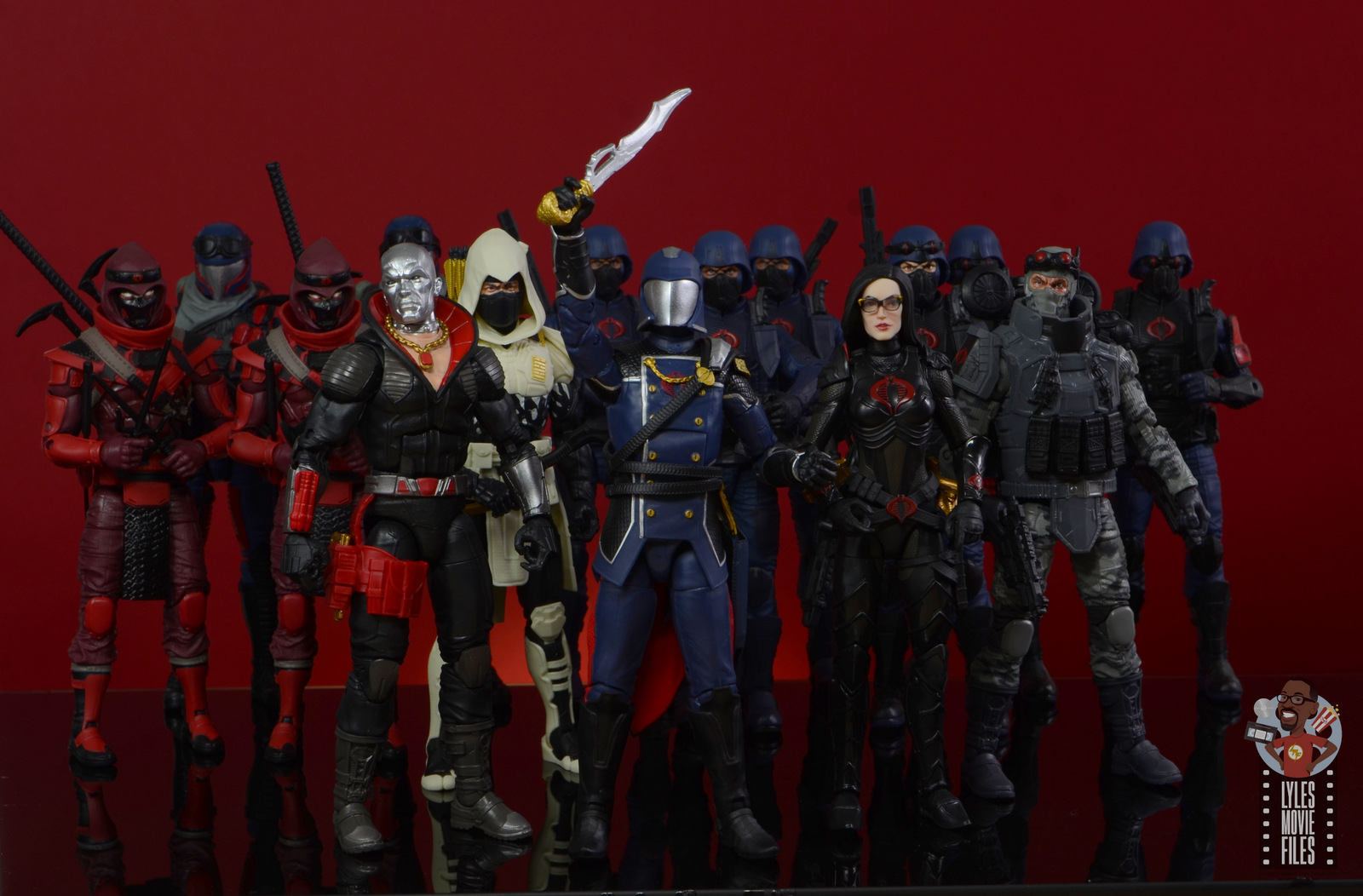 Where to Get It? Of course with any army builder everyone wants more than one so even with a greater supply they’re still hard to find. Try Walgreens and GameStop. If that fails, try Amazon or Entertainment Earth.